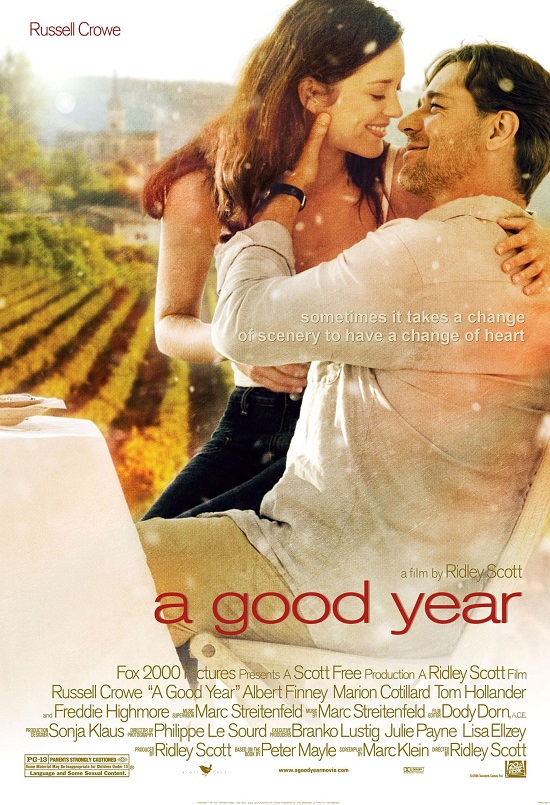 I admit that I am biased when it comes to travel flicks. Show me a knockout beauty with the backdrop of gorgeous vistas, and I start salivating. Sprinkle in some cultural subtext, fortified by the prominent role of local food and wine, and I am so ready to live vicariously through the on-screen characters, that the actual plot becomes rather unimportant. Make the locale one of my favorite places on Earth, and I will invariably give you a thumbs up.

The events in A Good Year occur in Provence (Favorite place? Check! Vistas? Check!). The female lead is the ravishing Marion Cotillard (now, a newly-minted Oscar winner for her role in La Vie en Rose). The setting is nothing less than a vineyard estate. Everything is properly aligned for my enjoyment.

And the movie is enjoyable, despite certain lack of believability around Russell Crowe as a romantic lead. He is, on the other hand, just flawless as a ruthless and haughty trader Max Skinner. Several members of the cast produce no less delightful performances, especially Archie Panjabi as Gemma, Max’s witty assistant. Ms Cotillard shines as the local Provençal goddess, even though there is something inexplicably “only in a movie” about how she lets Max win her over.

Flashbacks of Max’s childhood that he spent with his late uncle at the estate, are seamlessly interwoven with current events and provide an insightful backstory to Max’s [re]awakening from the world of cutthroat corporate finance to the world of unhurried country living (inheriting a vineyard does not hurt in this kind of journey). London, with its drab weather, acts as a perfect contrasting setting to the bliss of the sunny southern France, making an answer to the question “Which of the two places would you rather be at right now?” quite obvious.

As behooves a romantic comedy, the movie is quite funny with enough situational mishaps supported by crisp dialogue. The exclamation of “Lance Armstrong!” may sound a bit incongruous coming from an Englishman (but then, who else can a Brit refer to in order to annoy a bunch of French cyclists?), but you’ll feel an urge to cheer. “Remember: In France, the customer’s always wrong” reinforces such a strong American-held stereotype that you won’t be able to hold a snort. And “McDonald’s – in Avignon. Fish and chips – in Marseille. Allez!” in response to insufferable American tourists doing their lamentable change-everything-on-the-menu-to-our-specific-tastes ordering routine is nothing short of priceless, an instant winged phrase (I can’t come up with anything but a literal translation of the Russian idiom).

I suppose the credit for the dialogue goes to the author of the book on which the movie is based, Peter Mayle. Then, this is one of those movies that make me want to read the book.