Chicago, in my humble opinion, is the most architecturally impressive big city in the US. Walk around its central area and you will come across monumental eye-catching buildings on nearly every block. The Great Chicago Fire that destroyed much of the city center in 1871 gave a huge impetus to rebuilding, which was supercharged by the technological advances in construction, especially the introduction of steel-reinforced structures. That led to the advent of a new type of building, the skyscraper. Nine exemplars of that are part of a serial tentative World Heritage entry, Early Chicago Skyscrapers. On my recent visit to town, I plotted a walk around the Loop area with a target of stopping by all nine.

It goes without saying that photographing massive buildings from the street level is a thankless proposition. Especially when your ability to step farther back is limited by the buildings on the other side of the street and the perspectives are occasionally obscured by the elevated train tracks. Only in a couple of instances, there was enough open space between me and the skyscraper for a passable full-scale shot, at Ludington Building and later at Marquette Building. 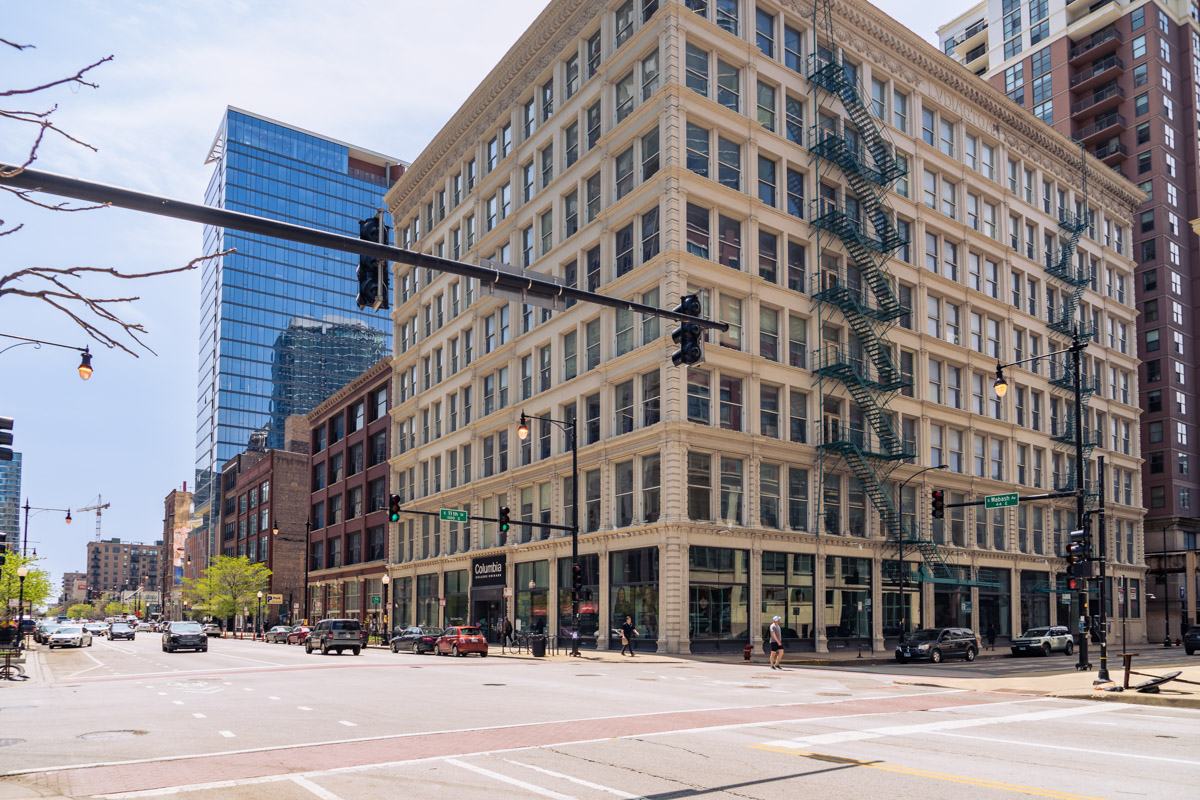 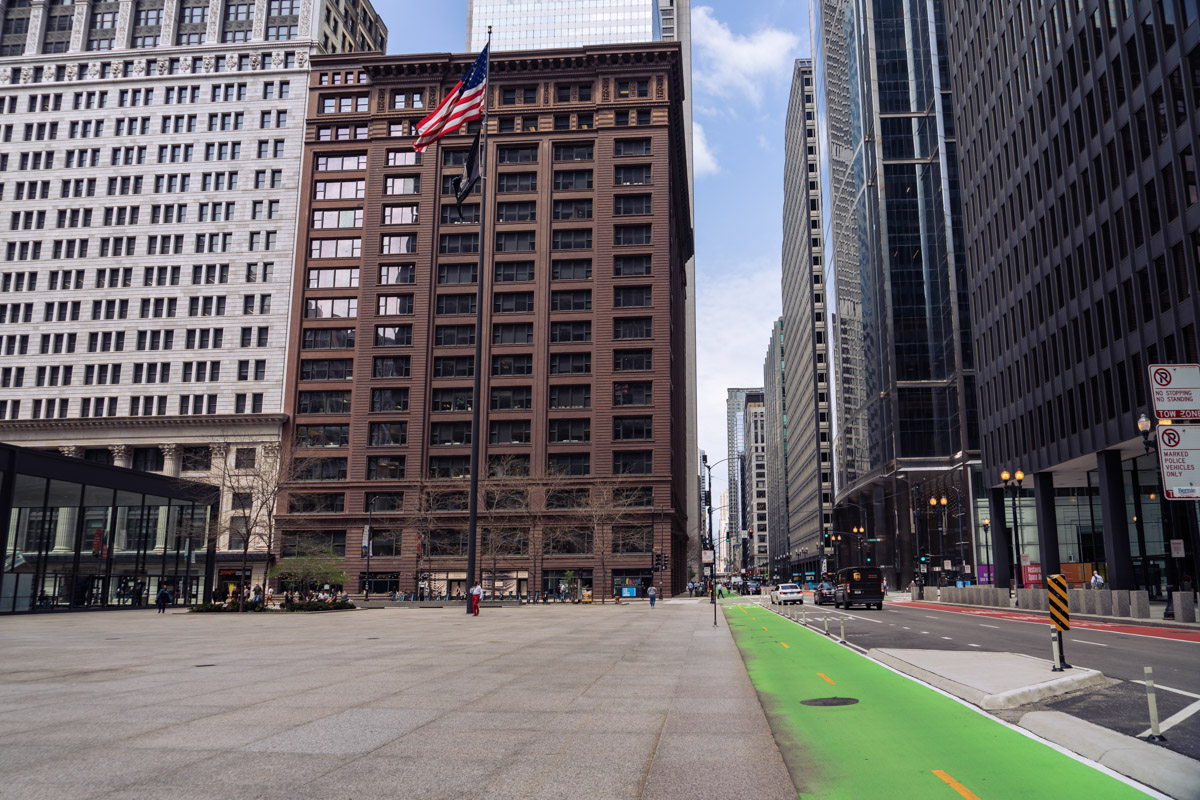 Auditorium Building is the only one facing a wide expanse, so I could stand far enough to get it into a non-crooked shot. I even included its neighbor, known as the Fine Arts Building, in the picture. The latter is on the right side in this perspective. You may be forgiven for thinking, just as I do, that it actually looks more attractive and feature-rich than the candidate for the World Heritage inscription on the left. 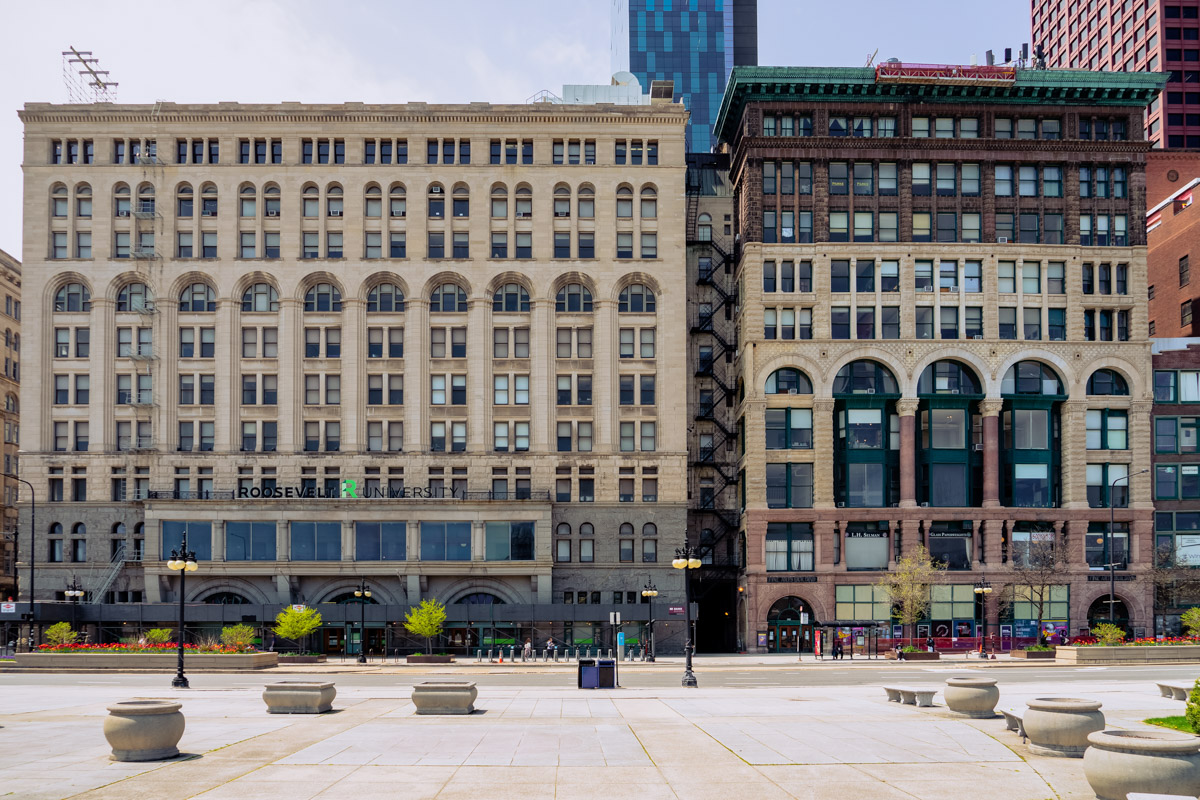 Neither Rookery Building nor Fisher Building afforded me a good angle for a full-size shot. 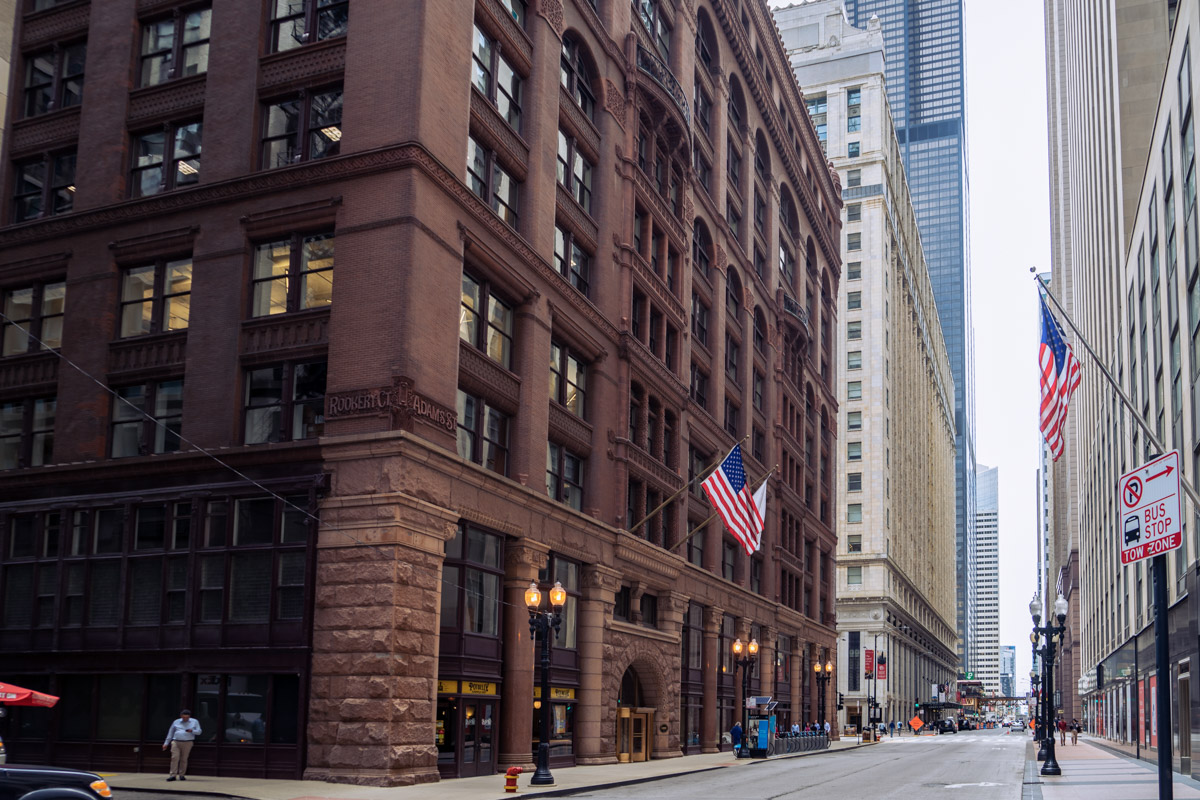 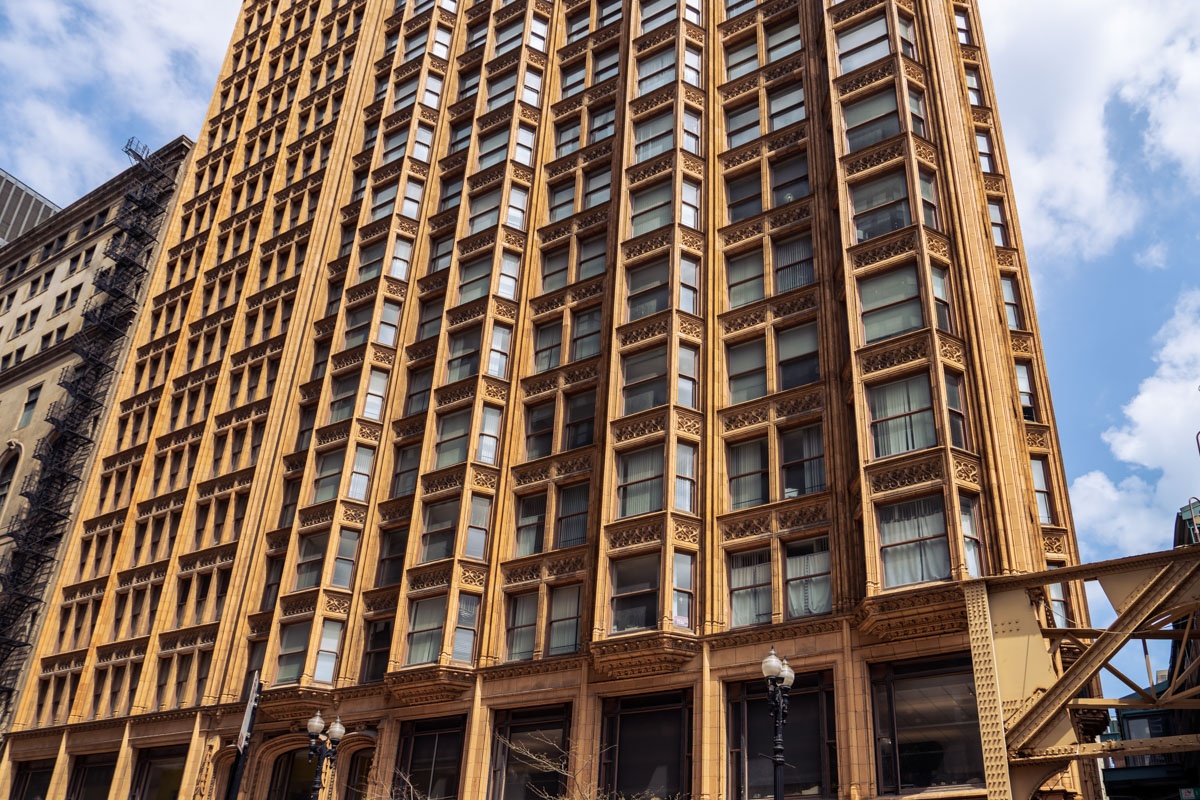 Both are probably the brightest gems of the collection. Just look at this neo-Gothic portal at Fisher. 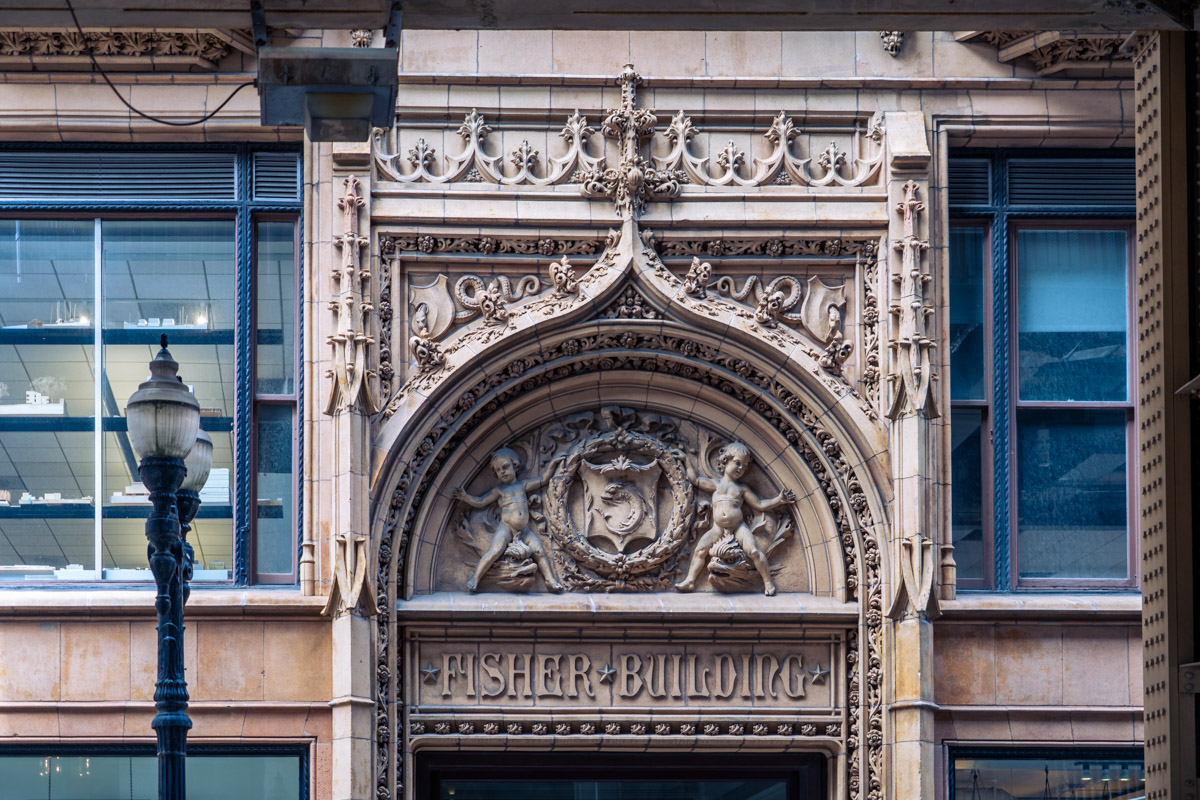 The exterior of the Old Colony Building did not make it to my photo output by happenstance, but here I stepped into the lobby, told the security guard that I was an avid explorer of historical landmarks, and took a couple of unexceptional pictures of interior details. 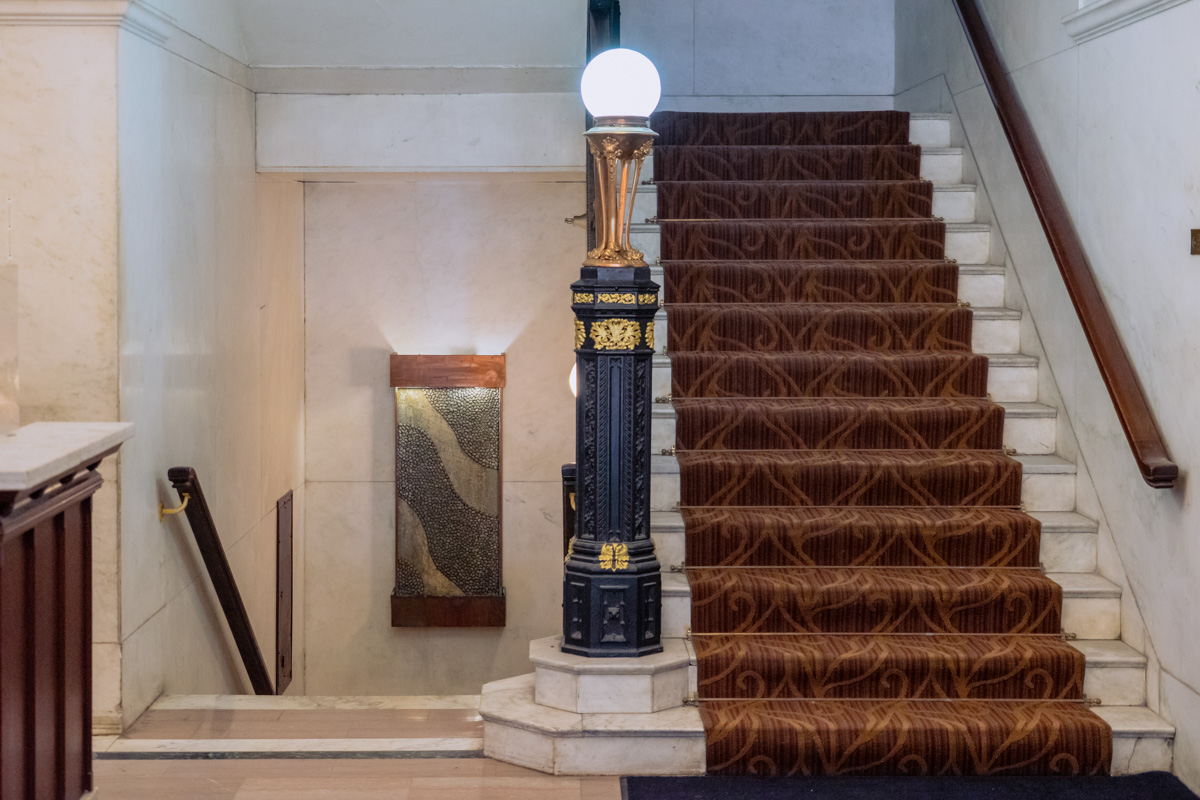 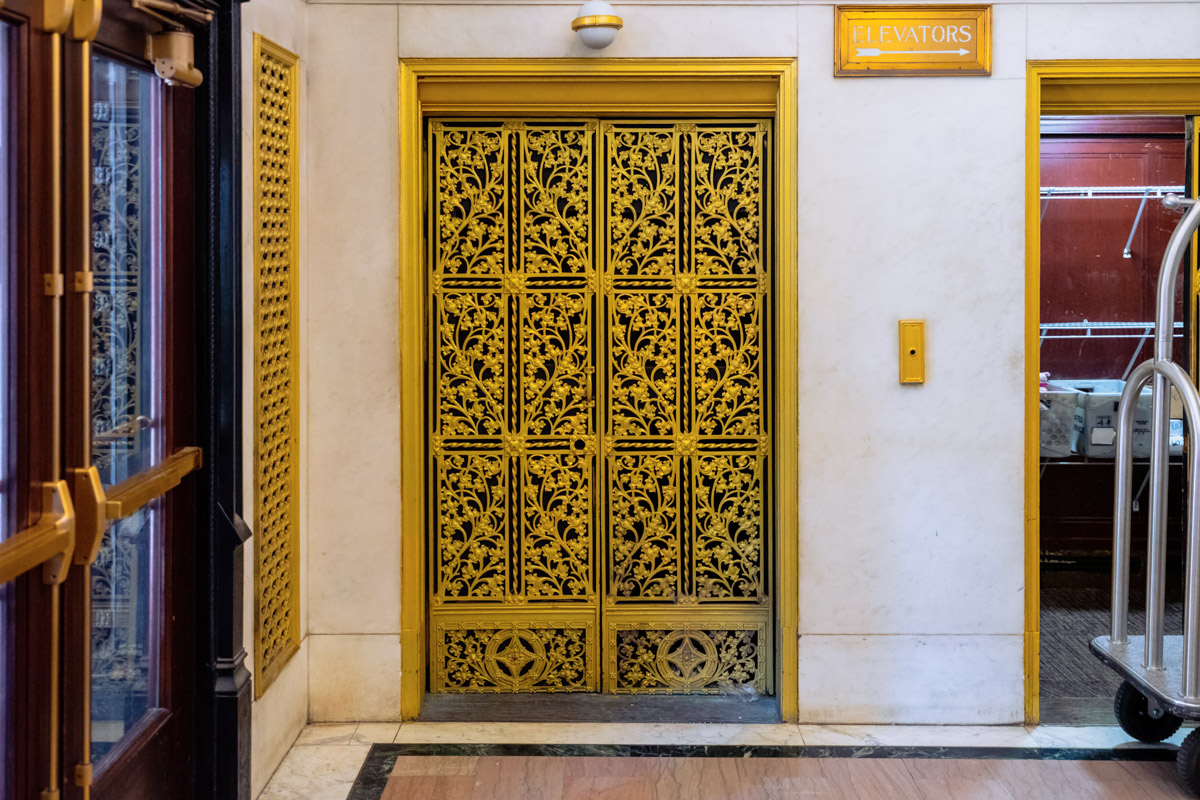 In the most notable fail of the expedition, I assumed that all of these buildings allowed some form of easy public access to check out the interior. In fact, only a few of them do. I frequently test the limits of accessibility wherever I go, but did not get anything of value in the first few instances on this walk (chronologically, Ludington, Auditorium, Second Leiter, Fisher, Old Colony). That led me to inadvertently skip attempting to enter what other people mention as the two most interesting interiors of the bunch, the Marquette and the Rookery. Well, I can’t remember a single targeted photo-walk of mine that would not include at least one big miss upon retrospection; now there is a future opportunity to remediate it.

The least outwardly welcoming building of the bunch is the Monadnock. 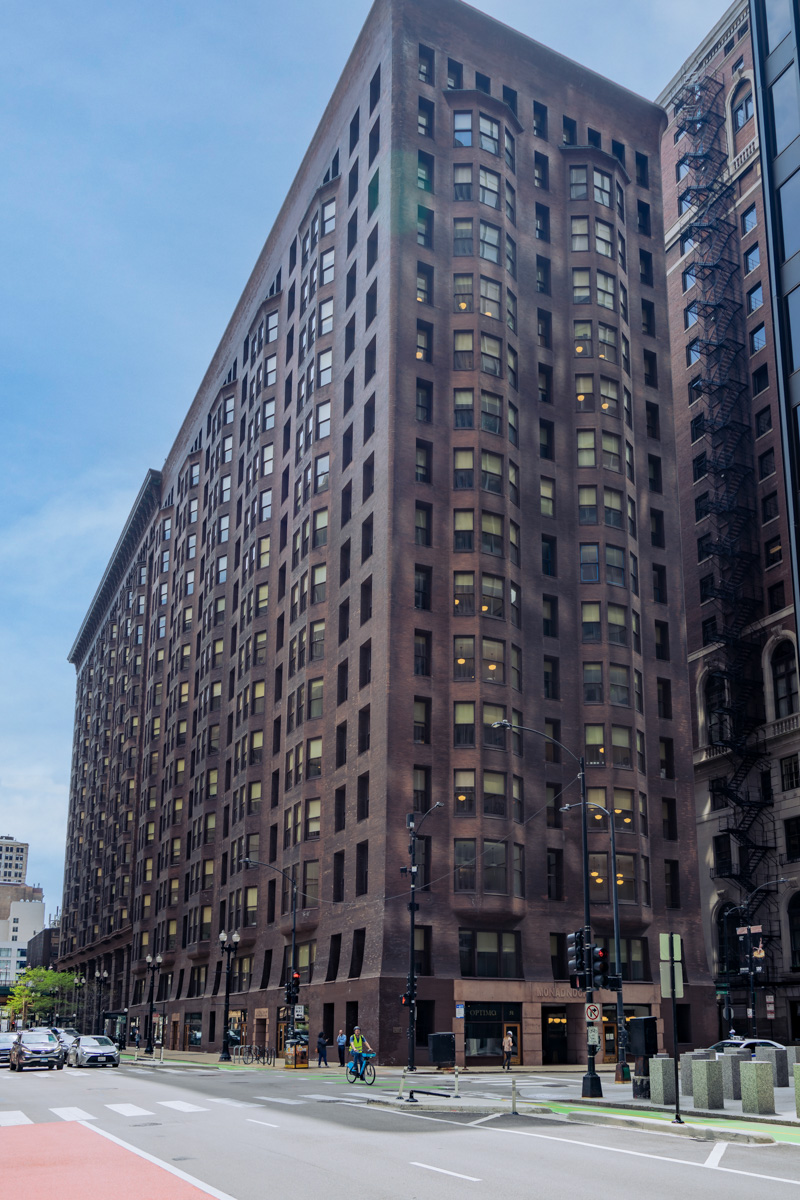 Here I finally explored a bit of interior. The ground floor doubles as a commercial passage parallel to the street, lined with old-school shops. Nothing overly special, just a couple of features found here or there. The security guard warned me against attempting to walk up the stairs. 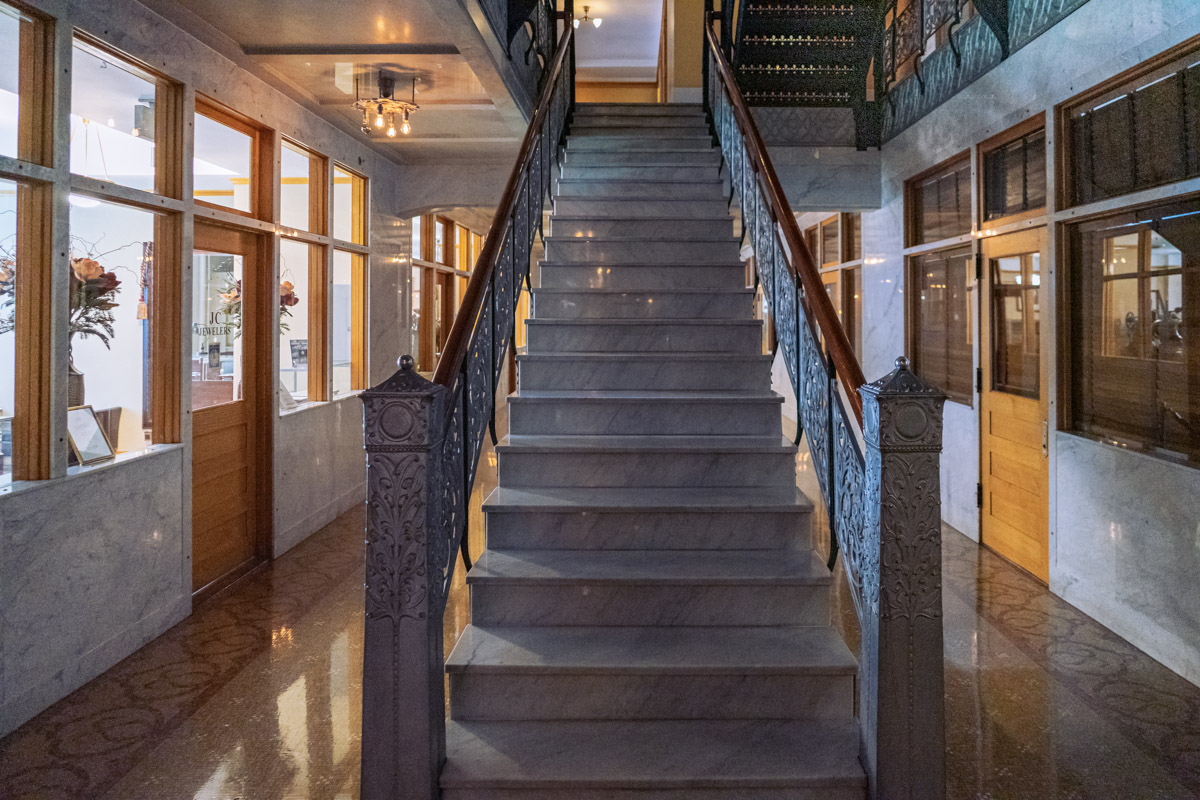 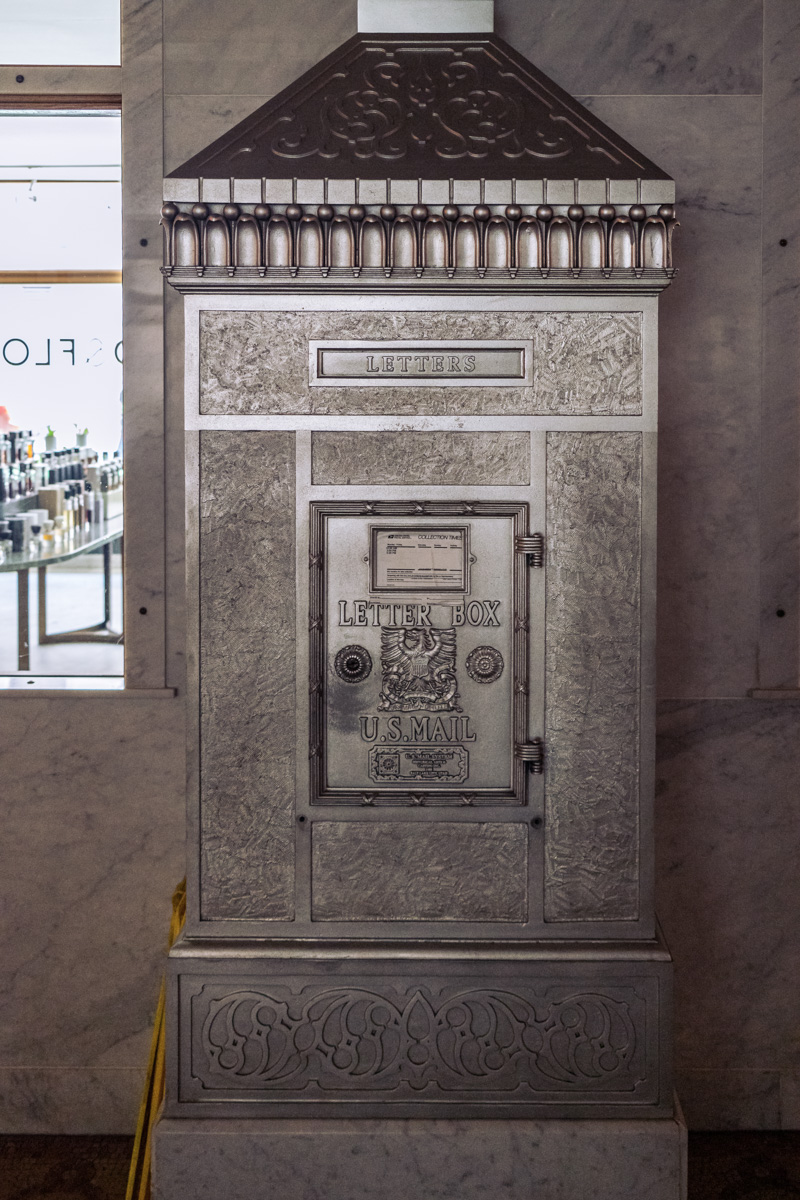 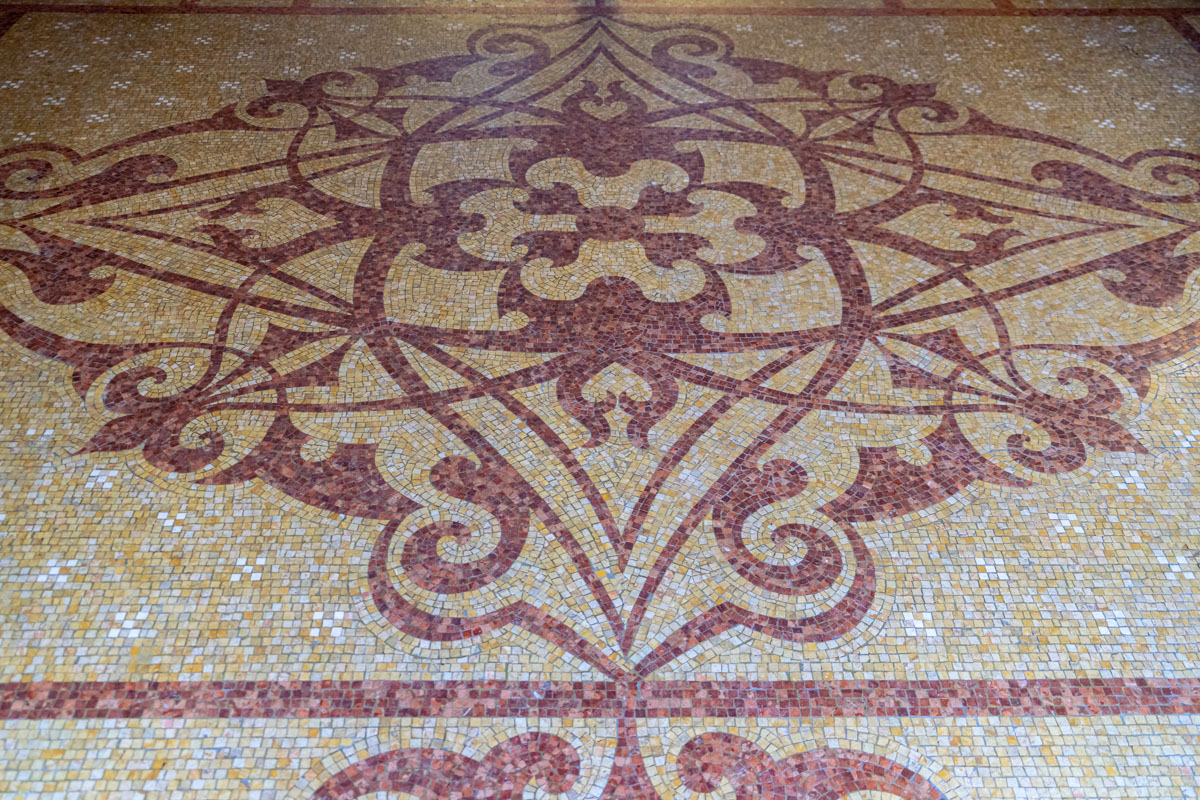 The last building on the circuit was Sullivan Center (aka Schlesinger & Mayer Building, aka Carson, Pirie, Scott and Company Store). I have definitely seen and even photographed it before, attracted by its distinct ironwork bay portal. 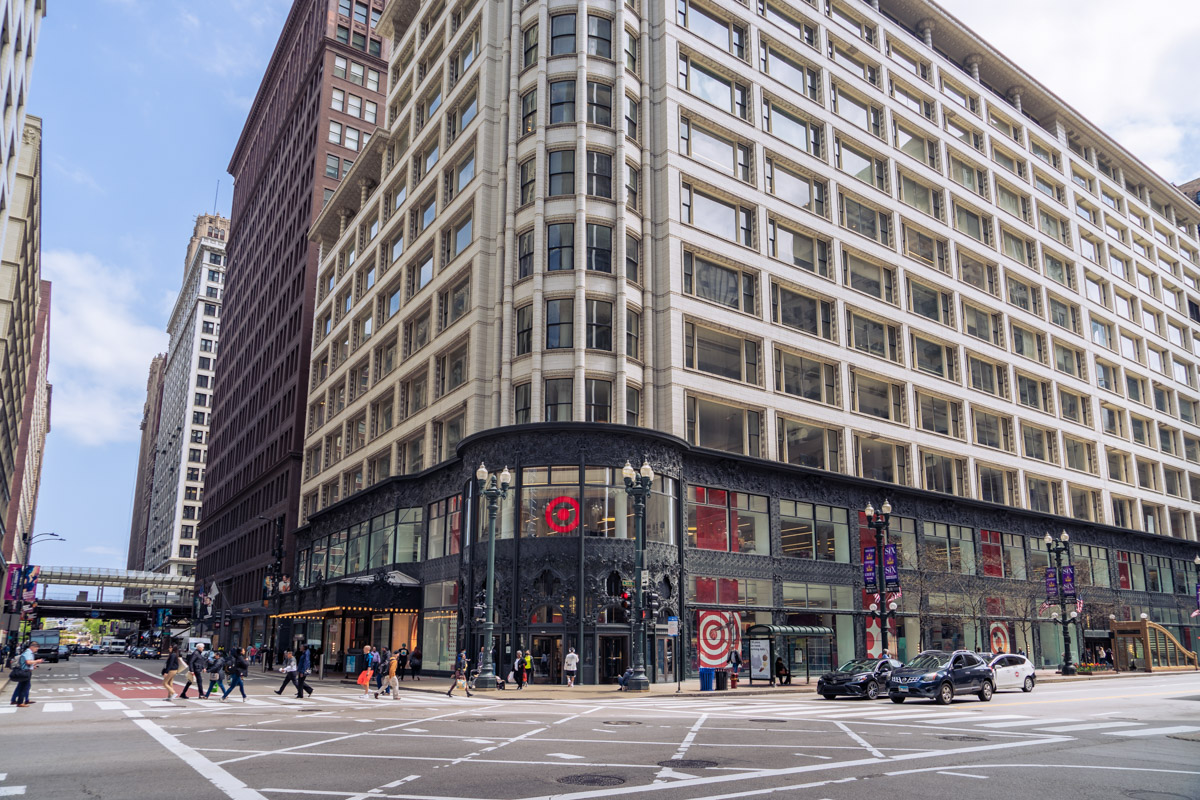 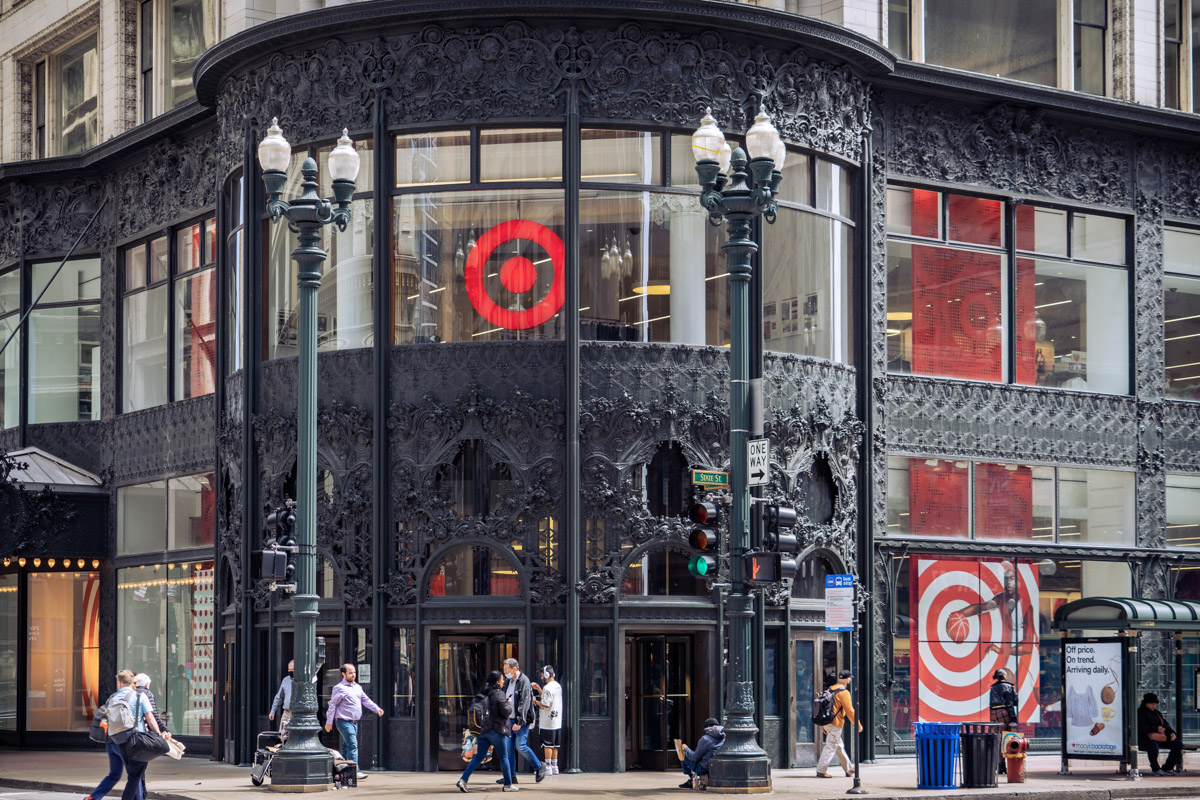 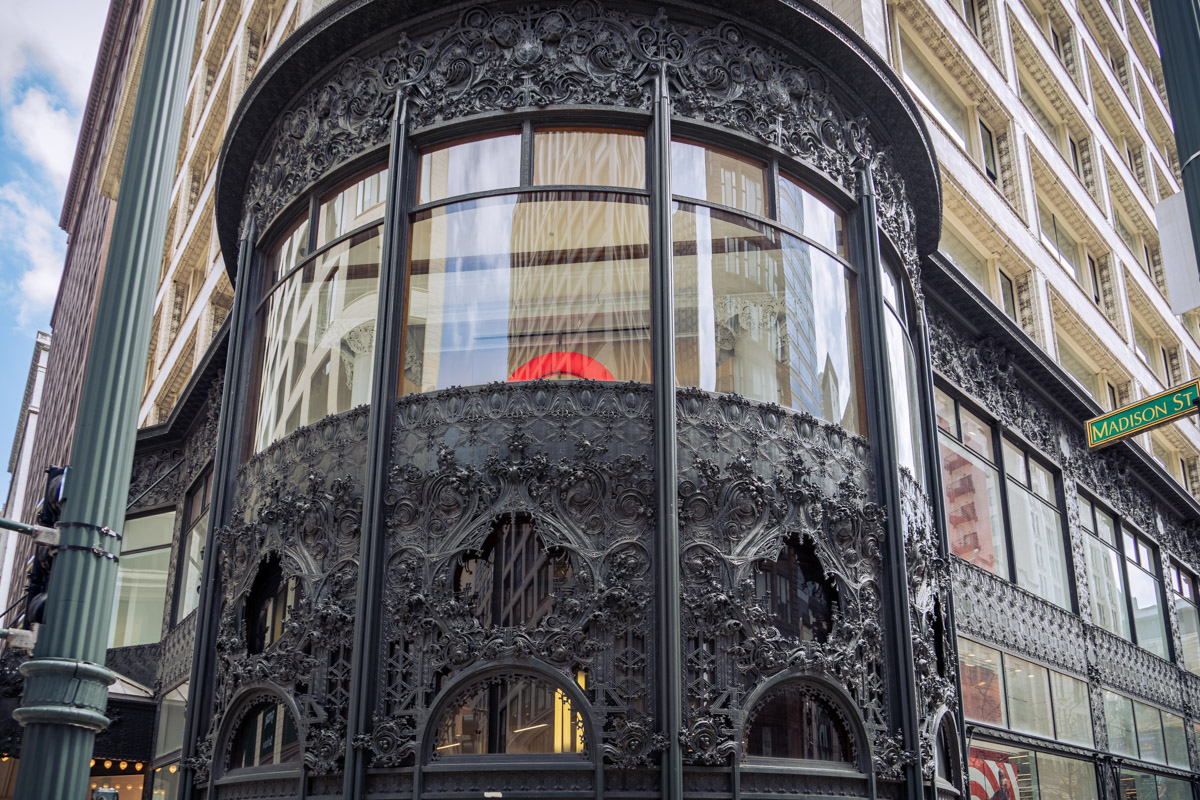 If you are keeping count, you will notice that I posted pictures of only 8 buildings here. What happened to the ninth? Not exactly sure. I was certainly standing by it, but I suspect I was too distracted by the much more impressive Harold Washington Library across the street to remember to take even one picture of the Second Leiter Building. In this perspective towards the library, the historic skyscraper is behind me. 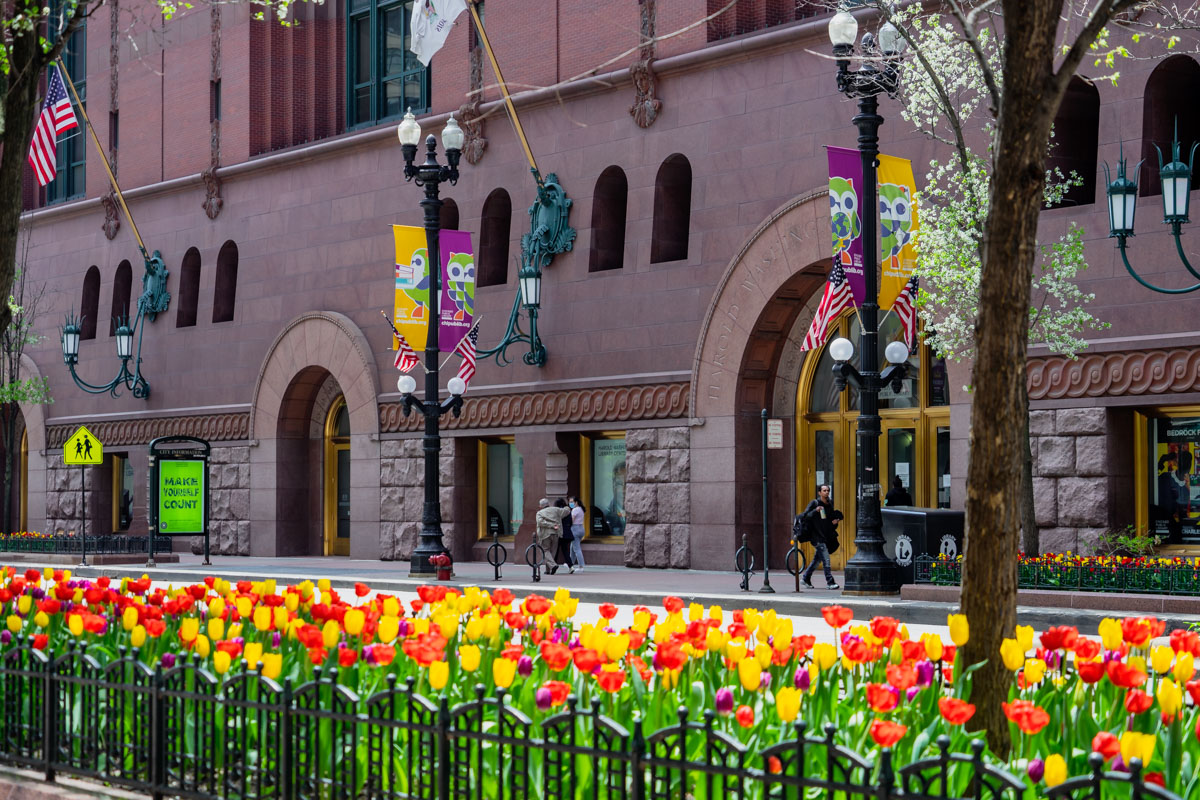 And since I added one non-WH-related shot to the post, why not add another. This is the nighttime view of the Chicago River and the “corn cob” Marina Towers from my hotel window. 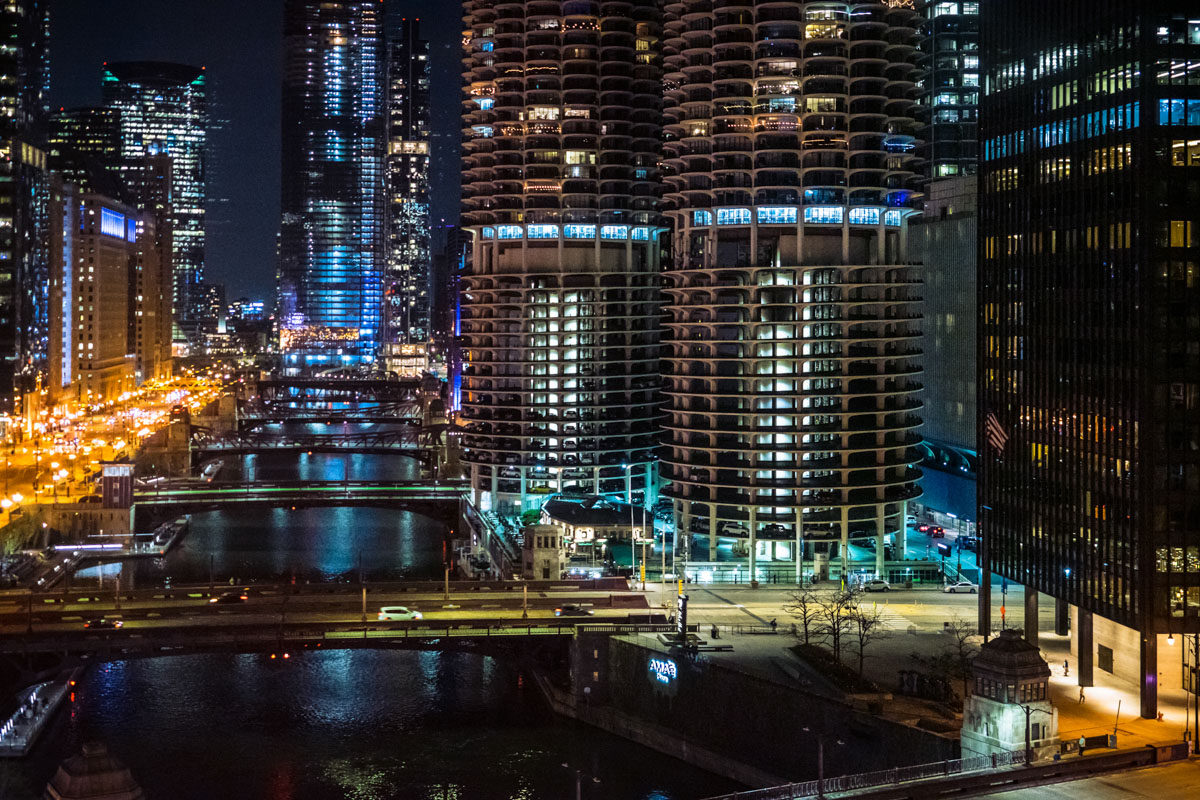 All in all, an ok excursion that took me a bit over an hour. I obviously rushed through it and did not stop enough to photograph unrelated buildings on the route. In any case, I cannot envision this collection of early skyscrapers ever becoming a World Heritage site in its current form. There is always some universal value in technological innovation – which these buildings seemingly represent – but they are not overly exceptional even within the context of just central Chicago.