It is well covered within this space that we rarely prioritize nature over culture on our travels. Especially whenever exploring a natural wonder veers into could be dangerous territory – such as, for instance, going up an active volcano. My focus in the last decade or so on visiting World Heritage sites may put some natural wonders on the initial target list, but they would be the prime candidates for being cut.

Given the limited timebox for our Sicilian itinerary, Mount Etna – a natural WH site that happens to be an active volcano – was in the to-skip category at first. Then, while researching activities in the Catania/Taormina region for what we had planned to be a slightly less sightseeing-centric day, Natasha came across a variety of Jeep excursions of the volcano. We thought, why not step out of our comfort zone for once; let’s have a bit of adventure – and add another tick for my WH roster.

“Jeep”, of course, is not meant here as a brand name, but rather as a generic term. Our vehicle was this Land Rover Defender. 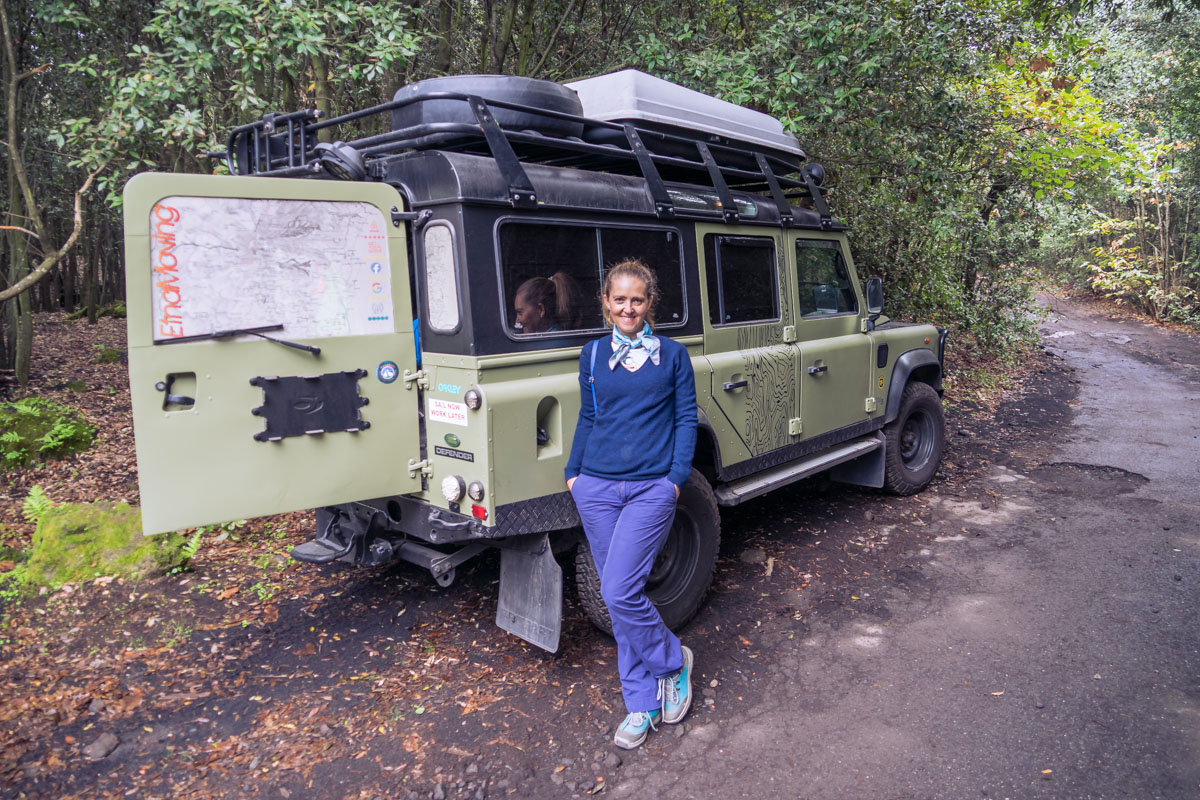 Our guide, who spent his entire life on the slopes of Etna, gave us an unparalleled overview of the volcano, driving us through various vegetation zones and lava plateaus, stopping by and hiking to several key features, and pointing out various details (that, frankly, an unprepared mind cannot possibly absorb and retain in their entirety). Some parts that we drove through you definitely cannot reach in a regular car and without guidance. Also, this being an active volcano, being led by someone able to interpret the seismic activity monitoring system was certainly reassuring (there are usually sufficient advance signals of the heightened activity, so the park would have plenty of warnings – and, likely, be closed – if there was a chance of an imminent eruption).

Etna is, in fact, recognized on the WH list as the most active volcano in the world, indispensable for scientific research. Our mental picture of a volcanic eruption is almost invariably a rocket blast from the conical top, but that is just one of the six different types of eruption, called Plinian – the most violent one, notably associated with Mount Vesuvius. Etna erupts differently, in the so-called Icelandic pattern, whereas effusions of molten basaltic lava flow from long parallel fissures on the flanks of the mountain more often than from its top. Such outpourings build lava plateaus and usually are not immediately threatening to people some distance away, since the lava flows fairly slowly. Unlike mountaintop eruptions, once the lava cools and hardens, it acts as the plug in the opening. Therefore, no two eruptions would occur through the same fissure. It also means that there are over 300 craters on Mount Etna all over the place, and many lava flow tunnels.

These tunnels look like caves and a few can be descended into. Our first stop on the tour was Grotta Cicirello, a less visited lava flow tunnel that formed in ancient times. 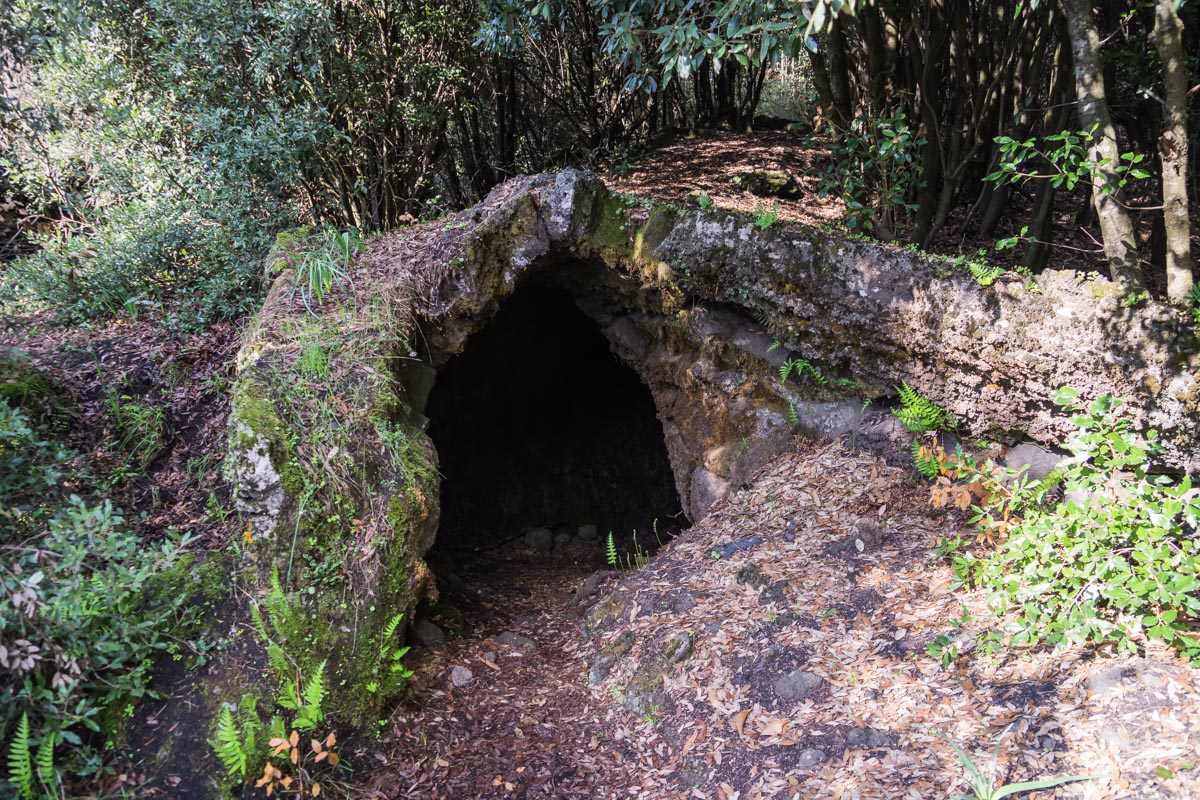 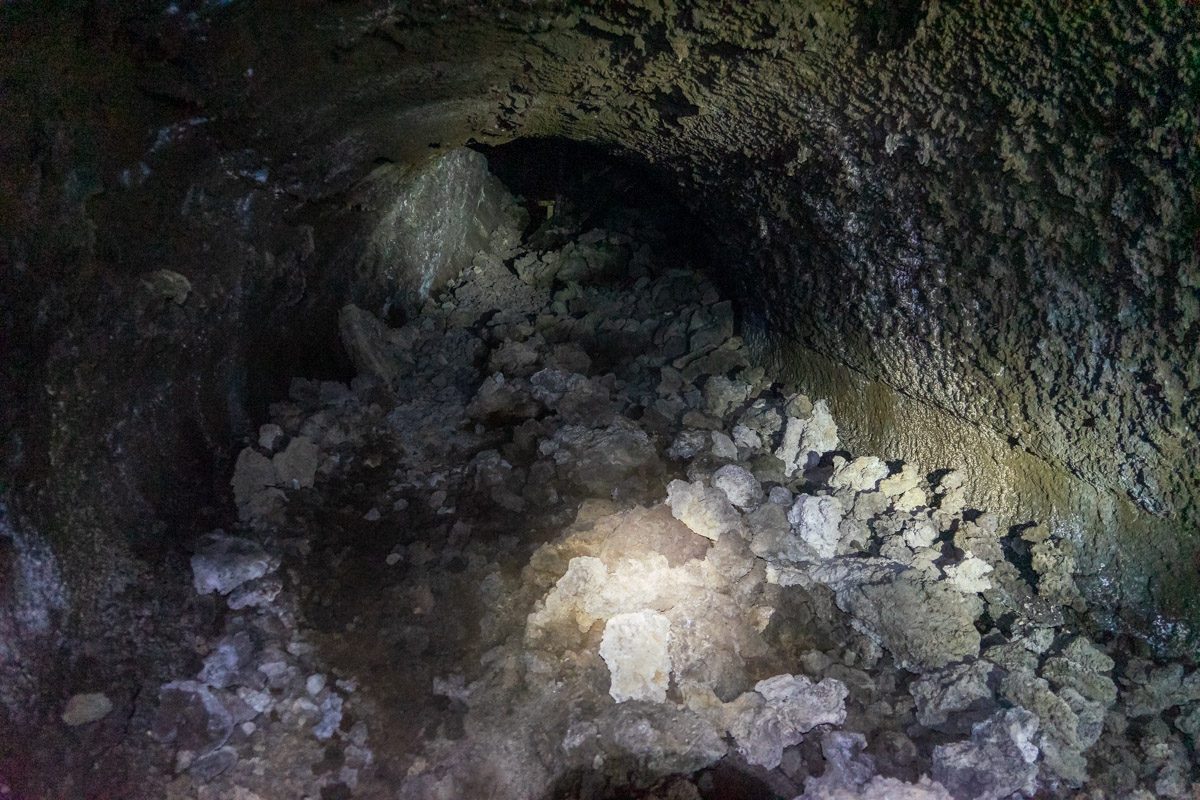 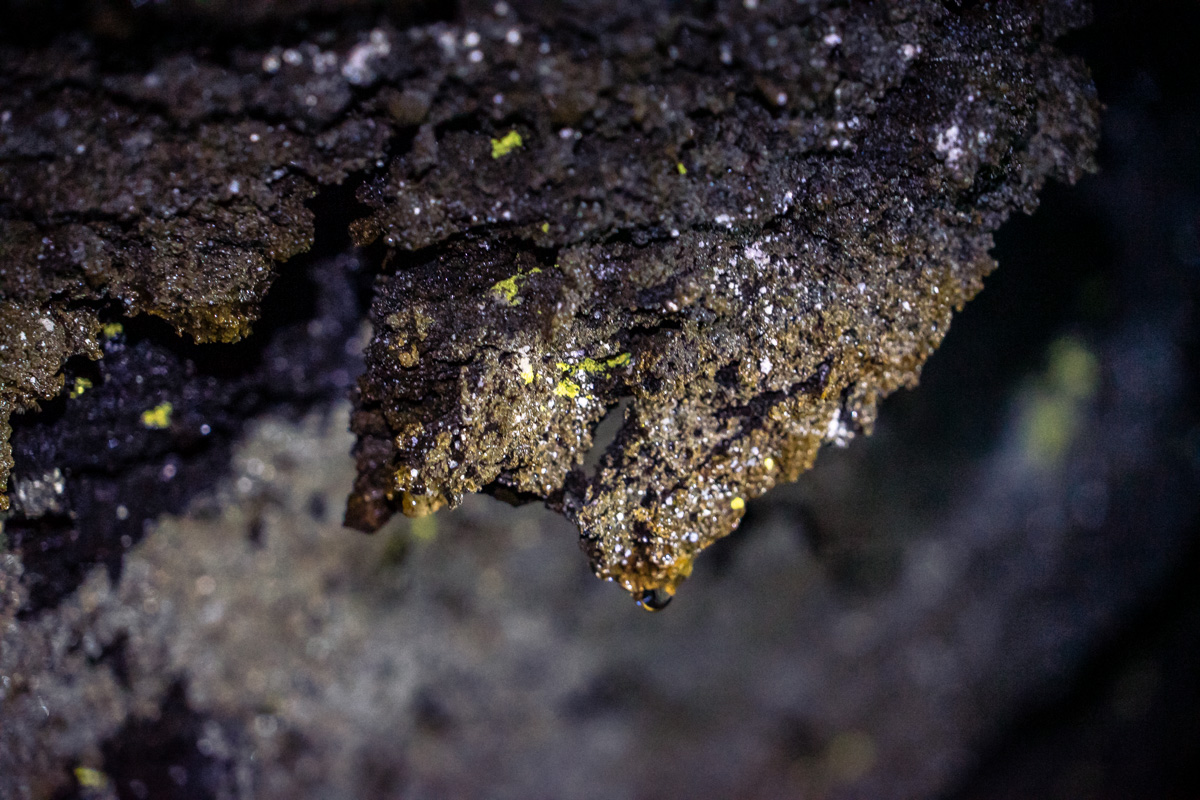 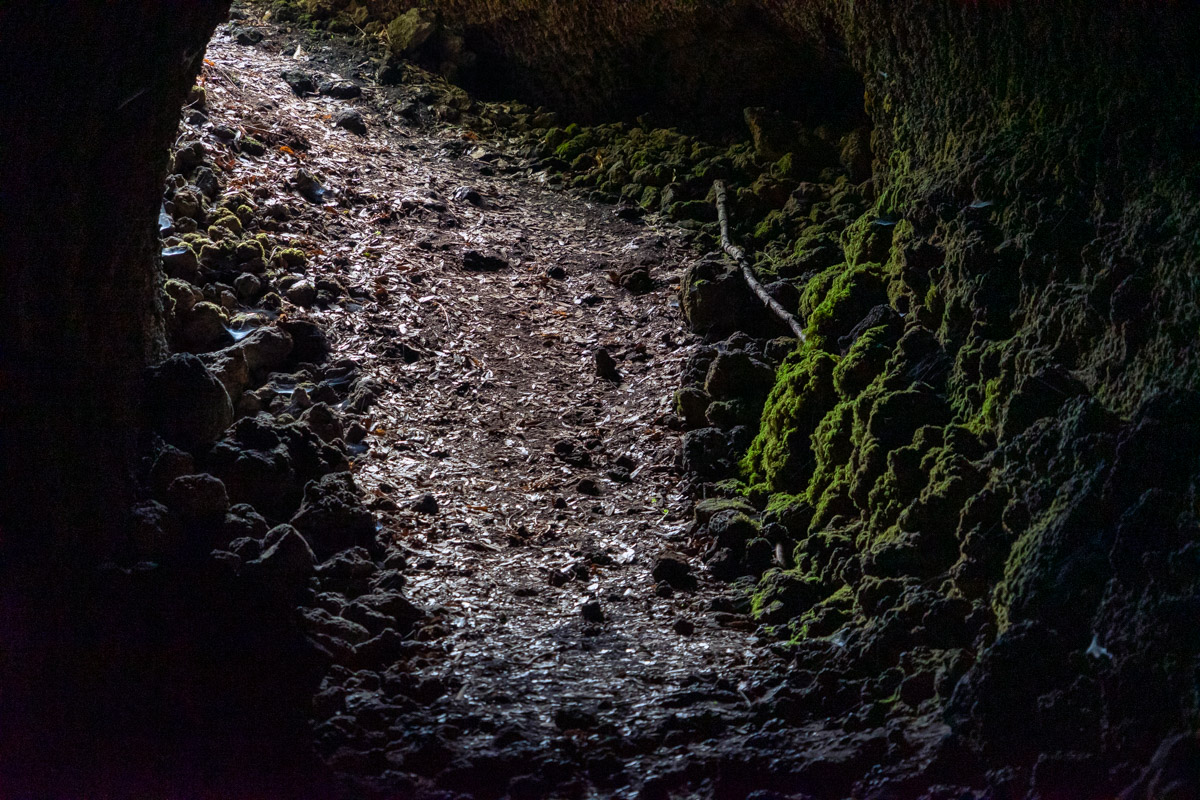 Our ride then took us through a variety of landscapes, shaped by thousands of years of lava deposits. 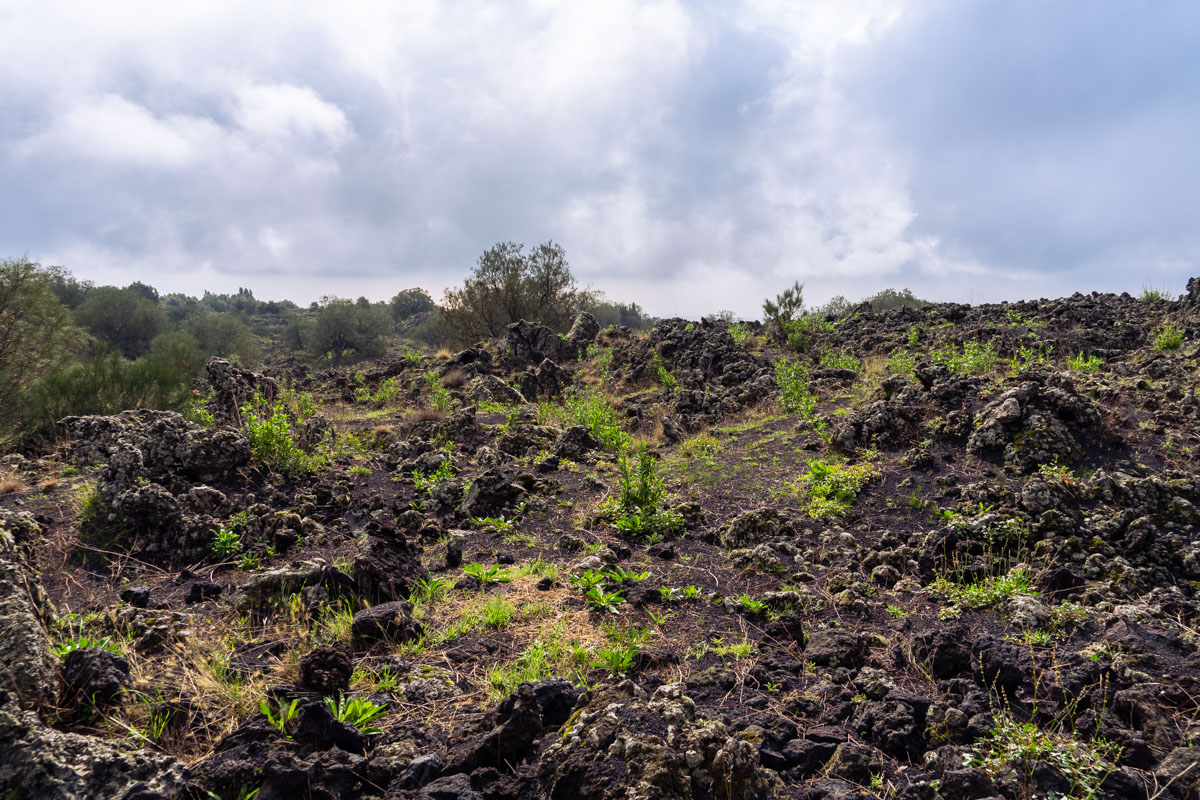 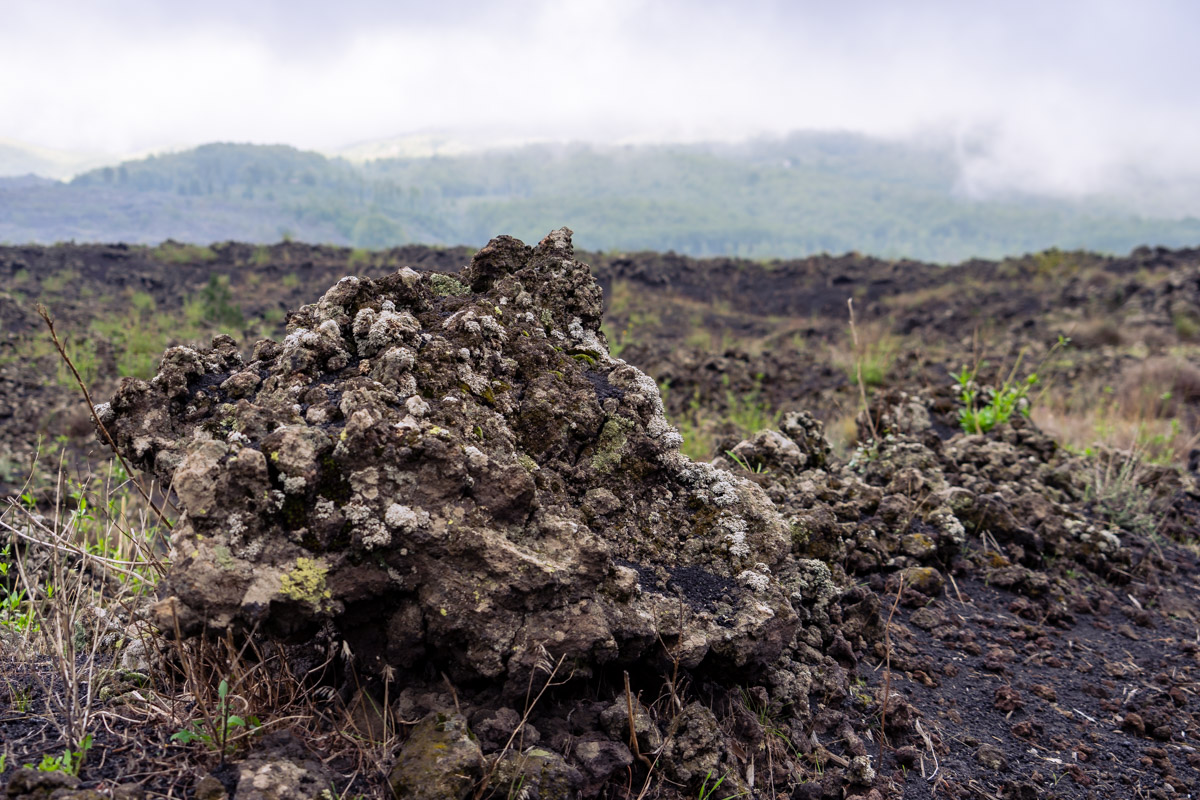 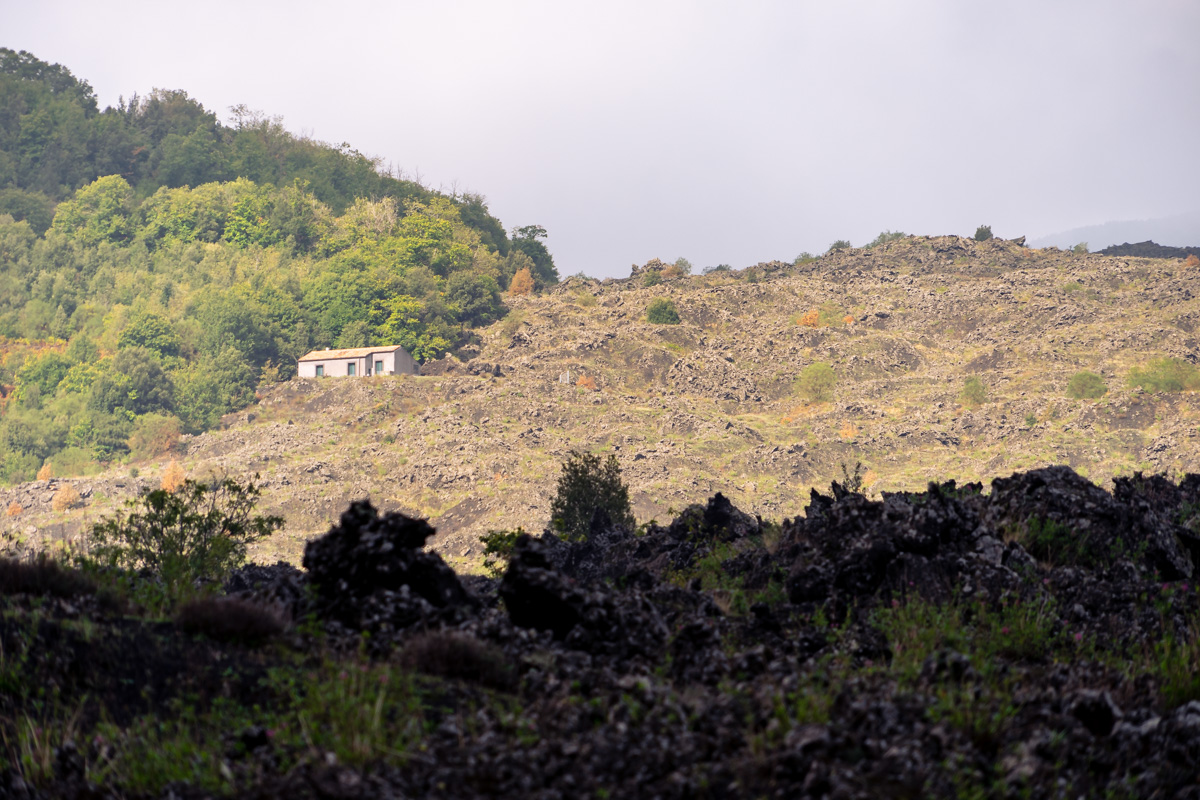 At higher altitudes, the surroundings feel increasingly extraterrestrial, with mostly just the Spino Santo plant for vegetation, and the different colors of the lava rocks pointing to the varying ages of the deposits from past eruptions. 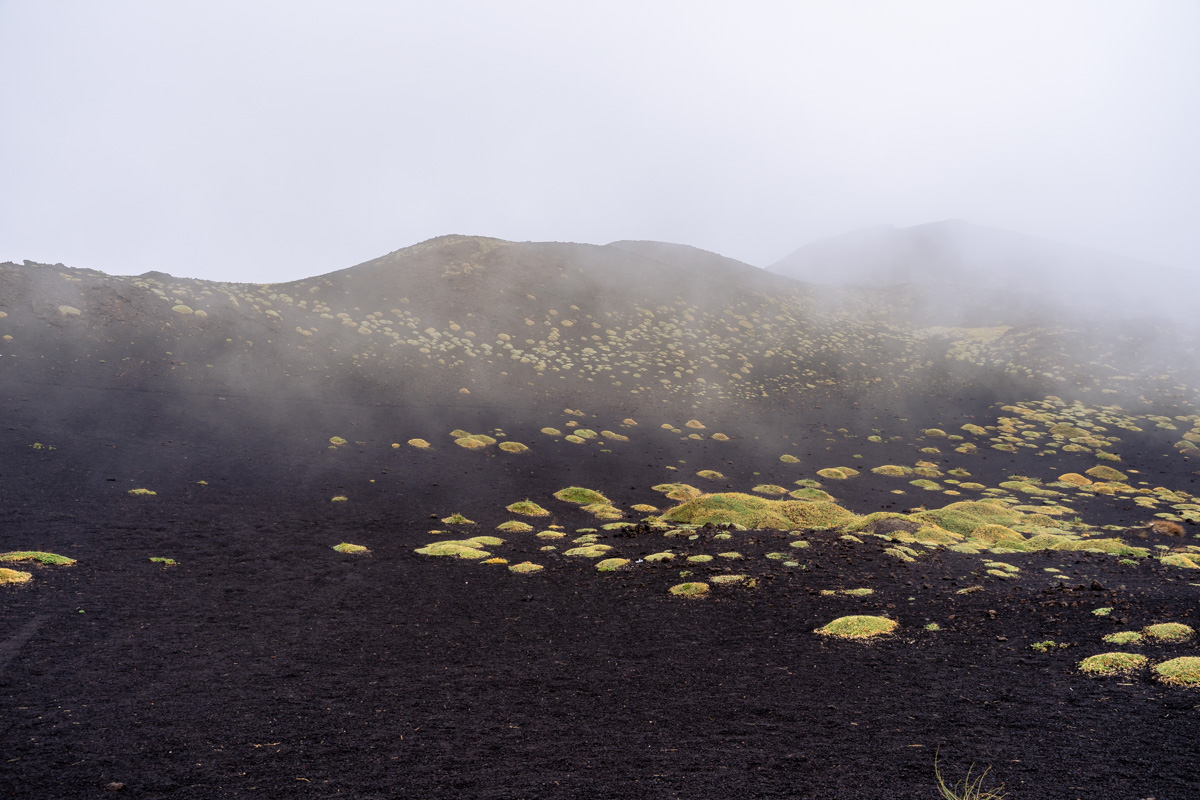 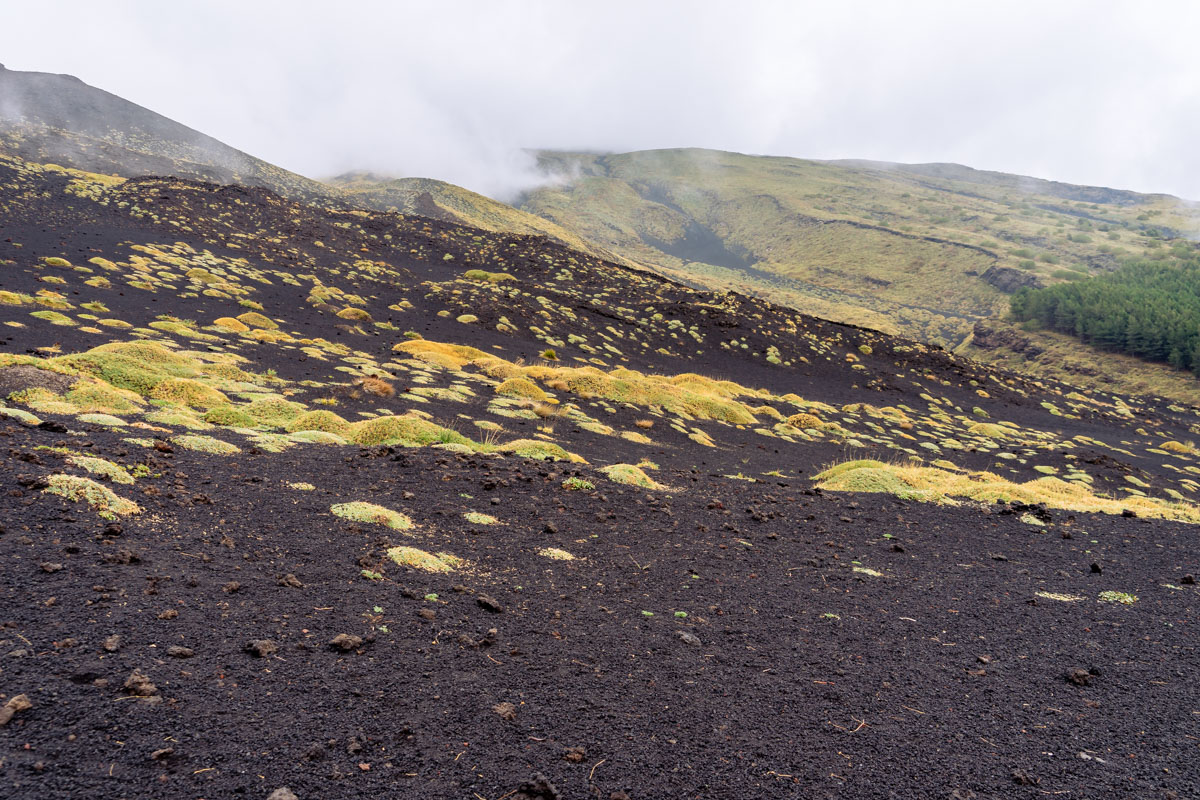 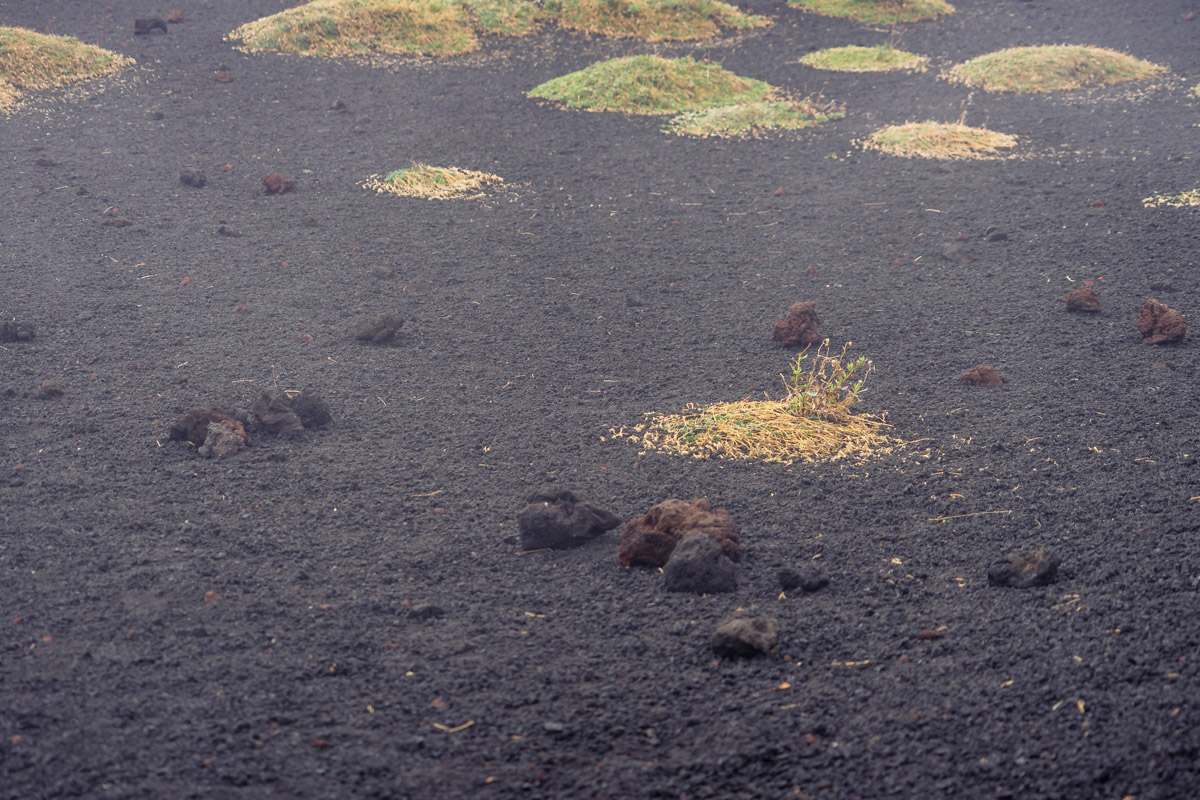 A few not too remarkable but illustrative pictures. First, a private homestead. Within the boundaries of the Mount Etna National Park, there are still quite a few parcels of private land. On the lower parts of the slopes, of course. 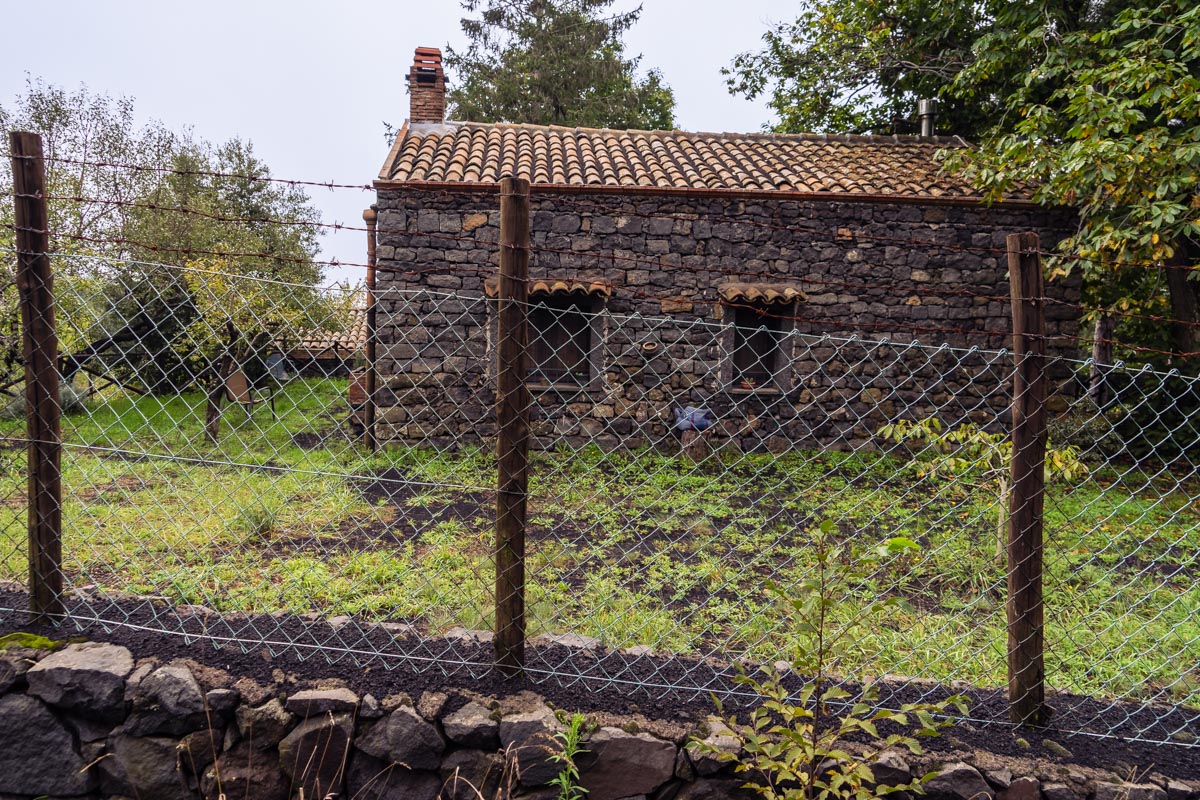 The fog was a constant feature of our visit, in some places creating an impenetrable wall between different elevations. 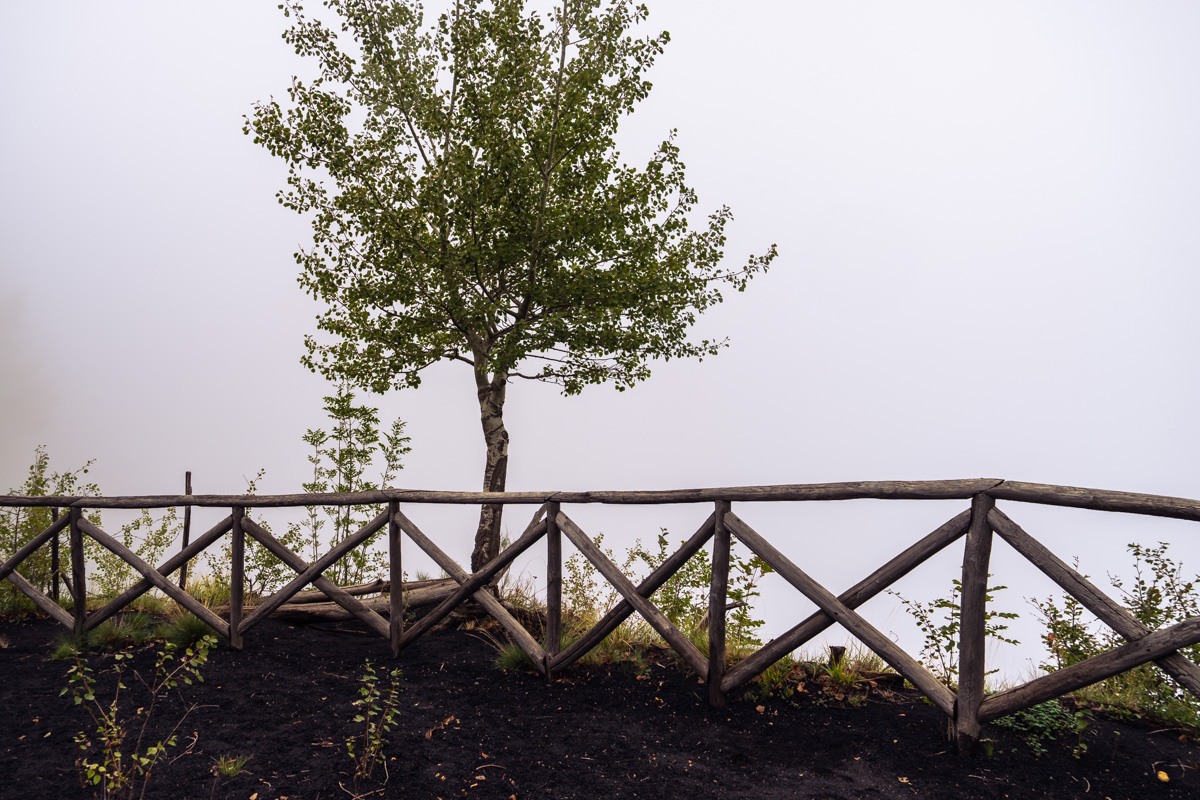 And even in the areas full of vegetation, we still walked on the volcanic ash. 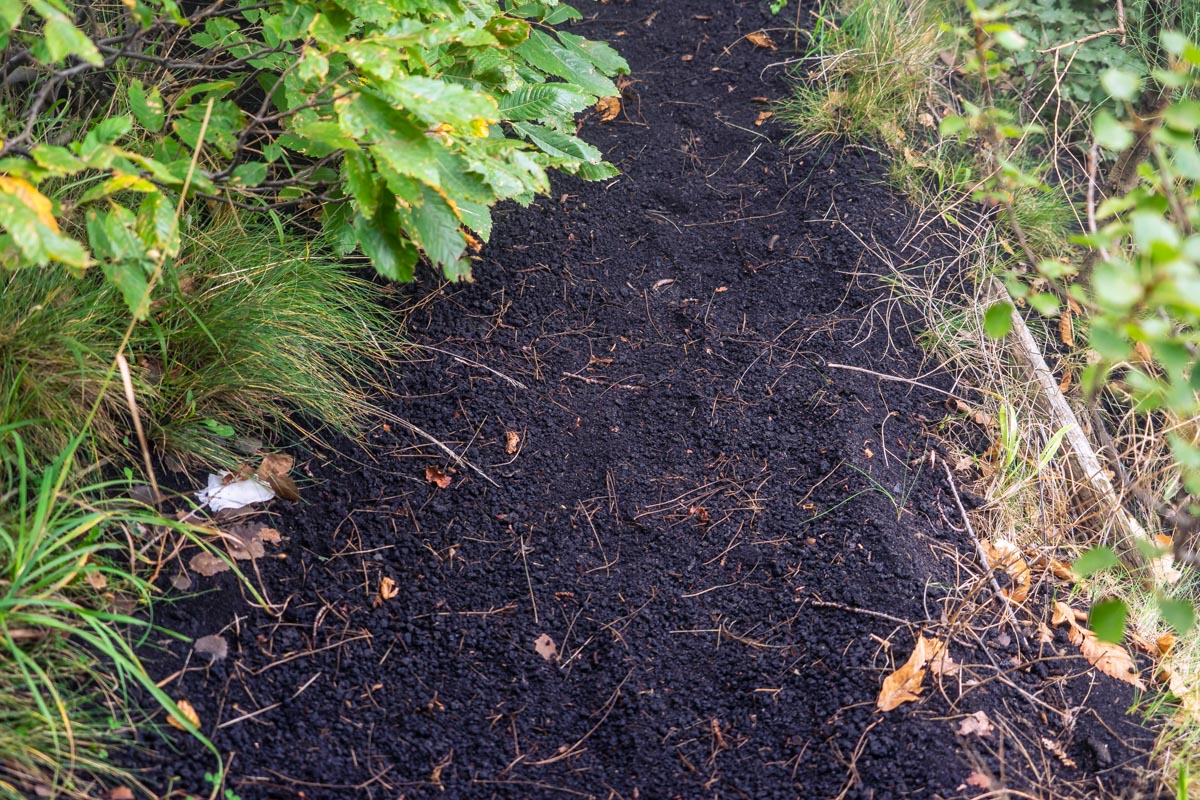 The basaltic lava starts out black, but oxidation of iron turns it red after a while. 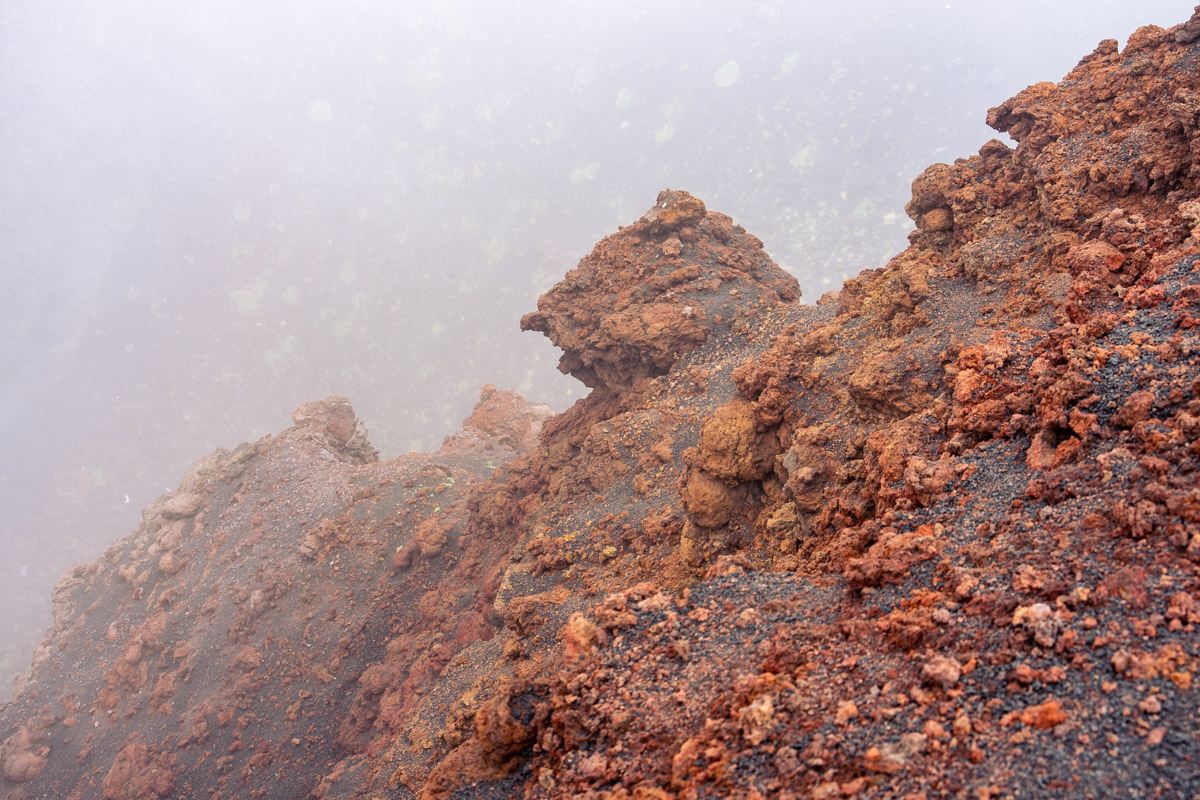 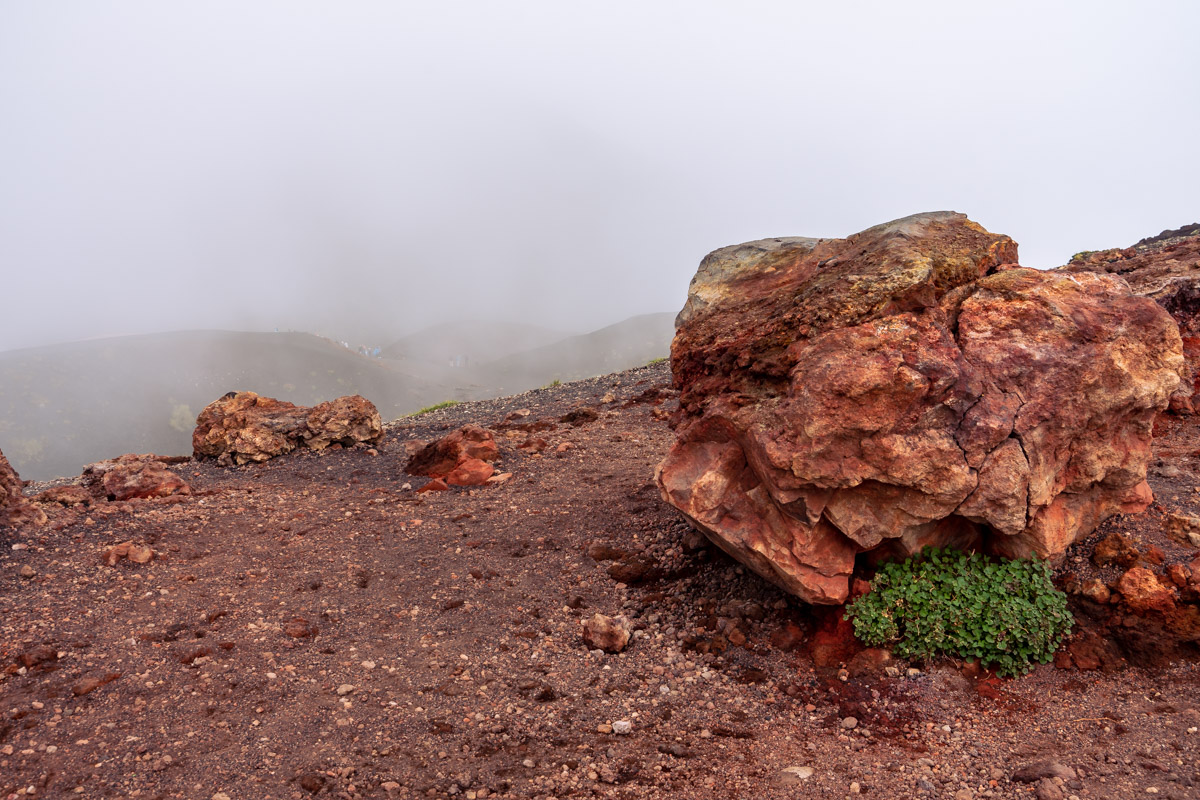 Our main stop on the tour was at a cluster of craters called Silvestri, which were created during the eruption of 1892 and are sitting about 2 kilometers above sea level. 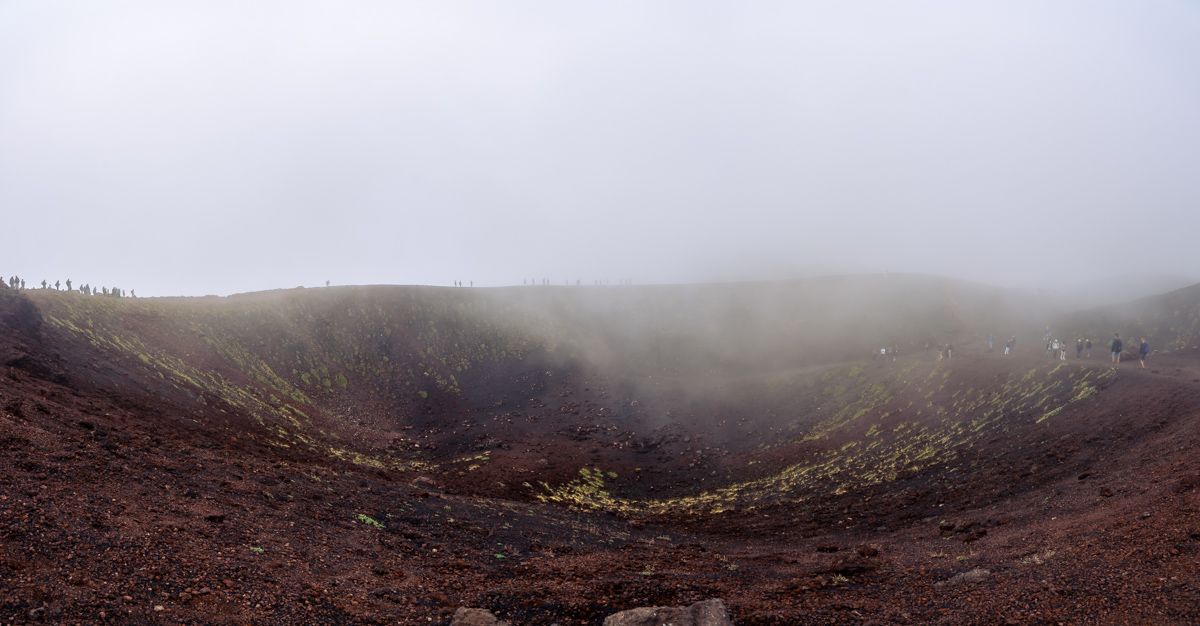 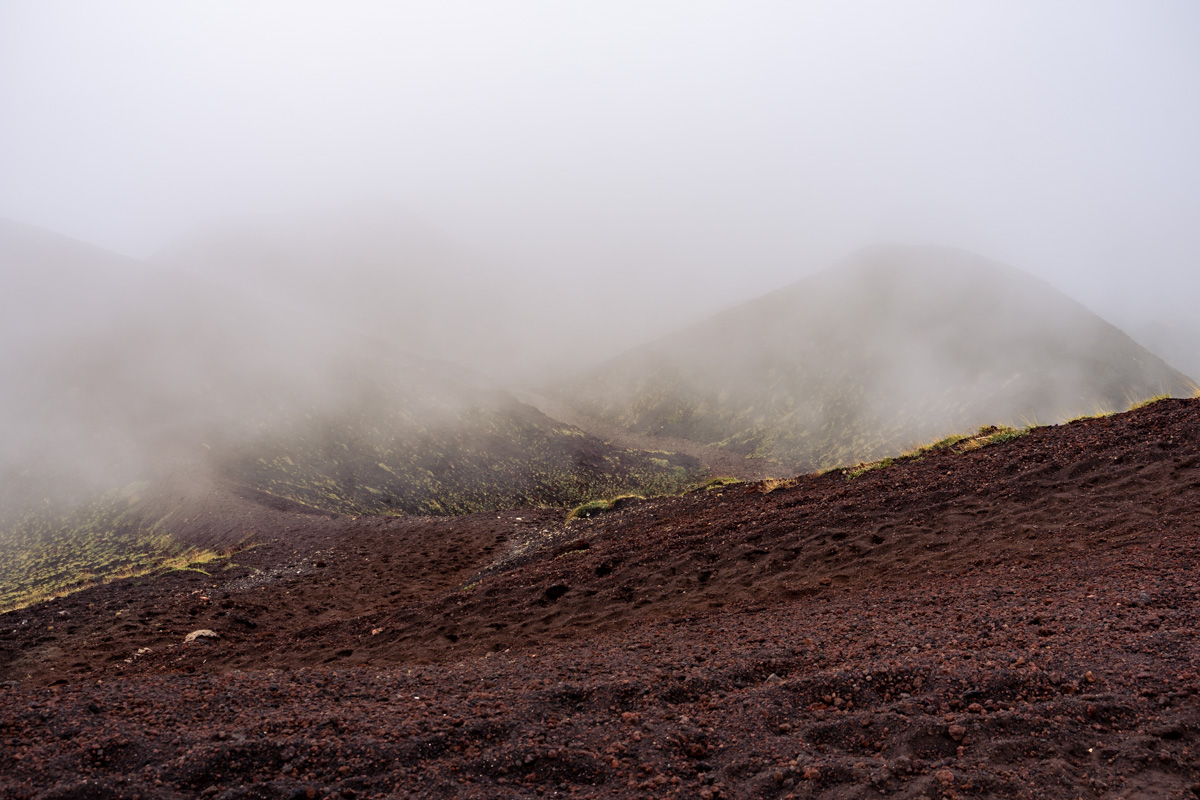 The dense fog fairly quickly lifted (and later came back, and lifted again), so we were able to see a number of surrounding features. 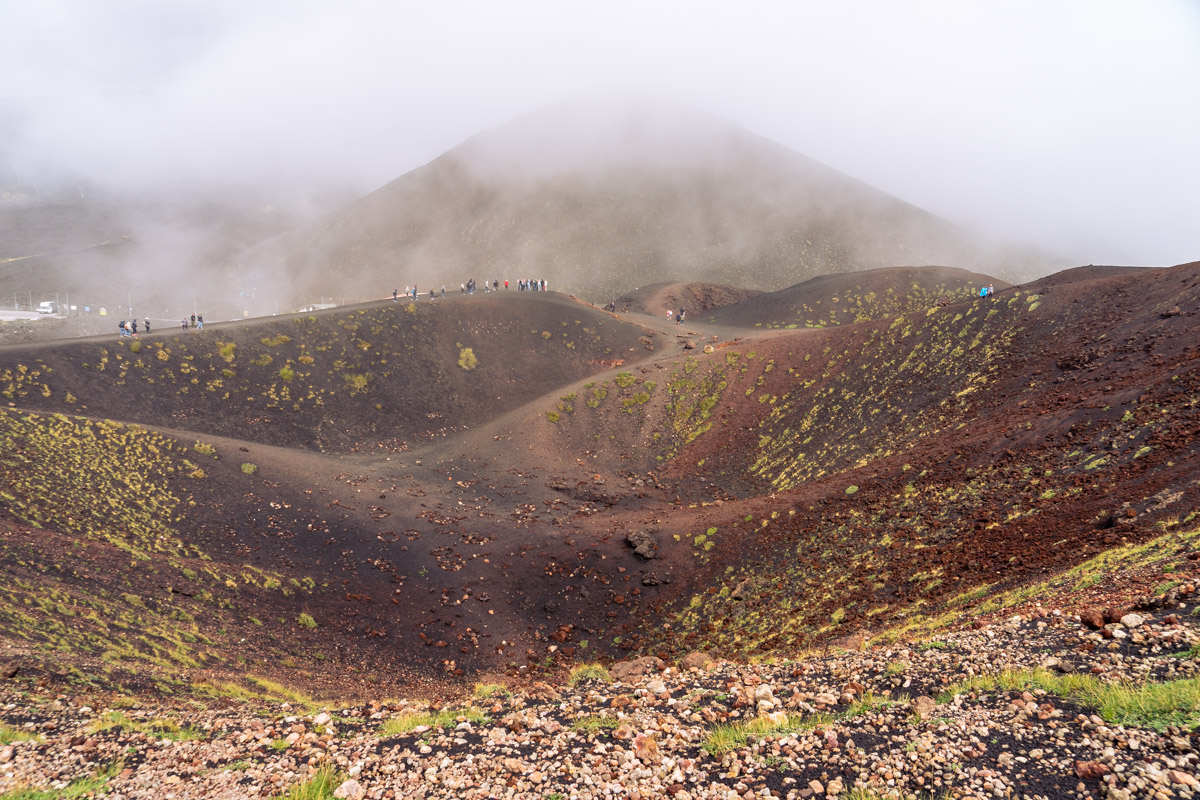 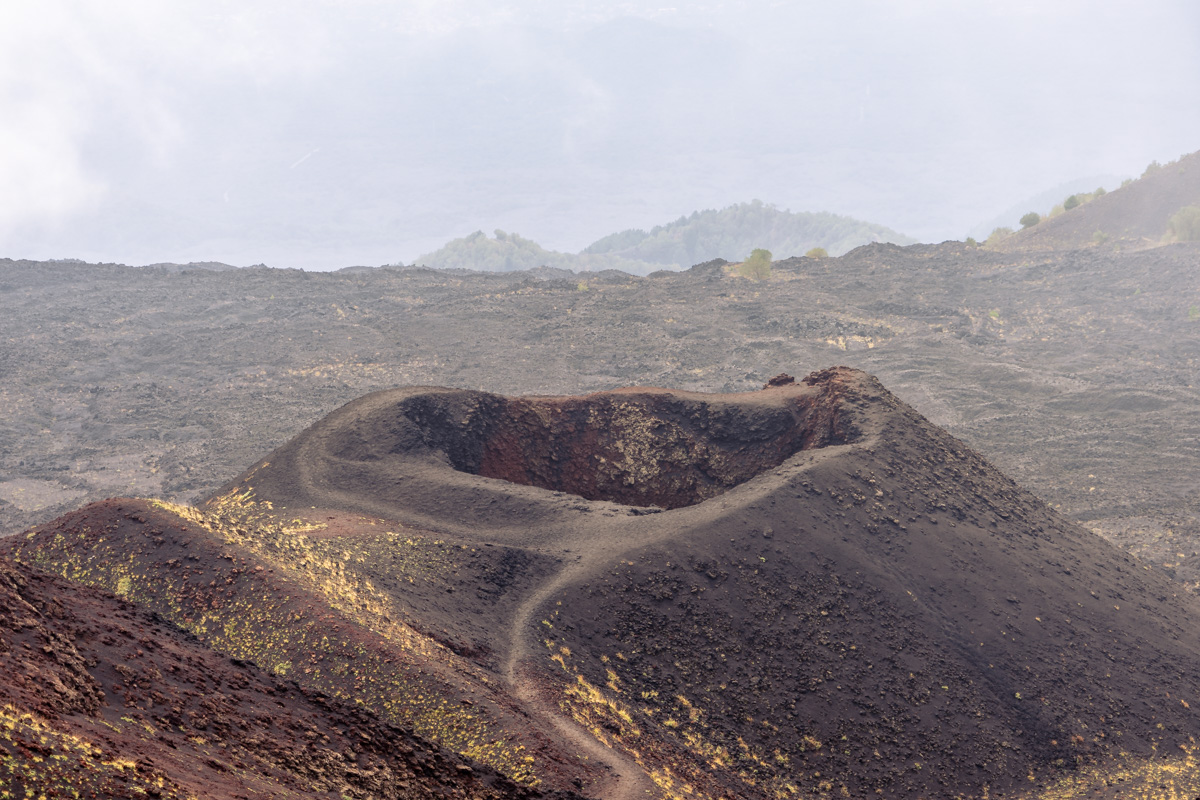 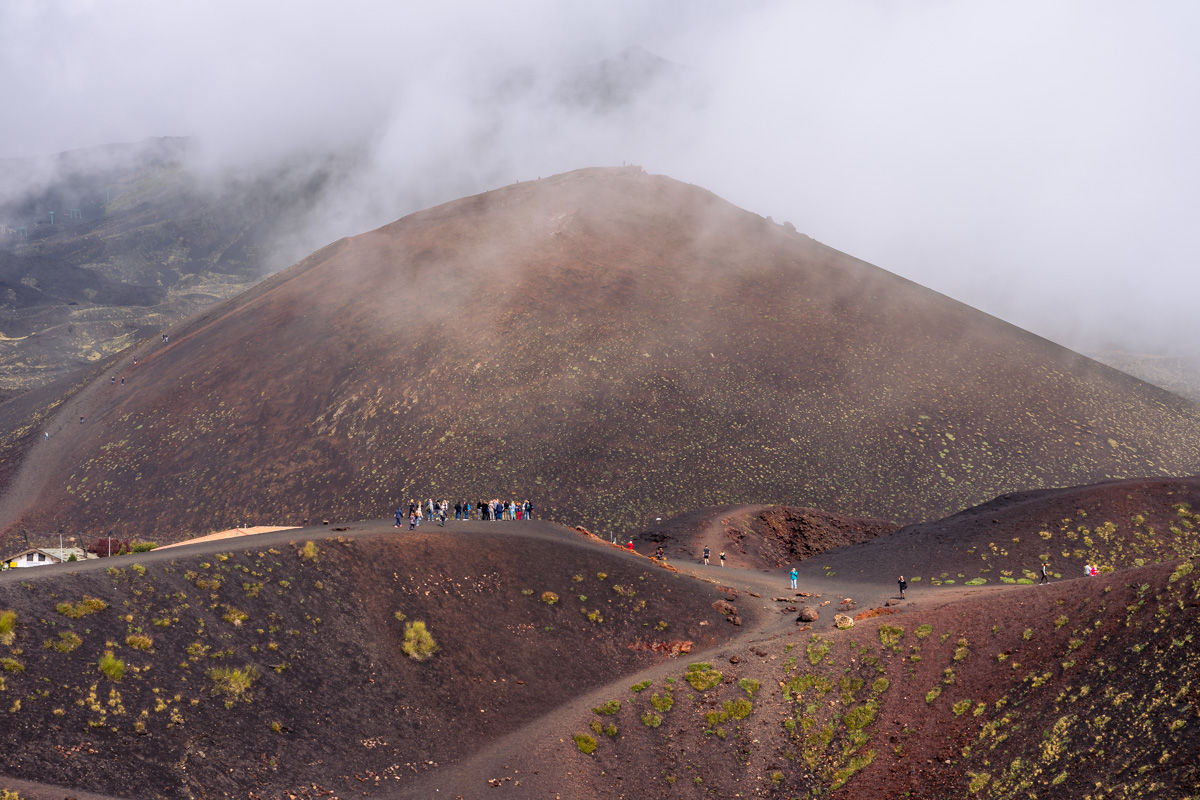 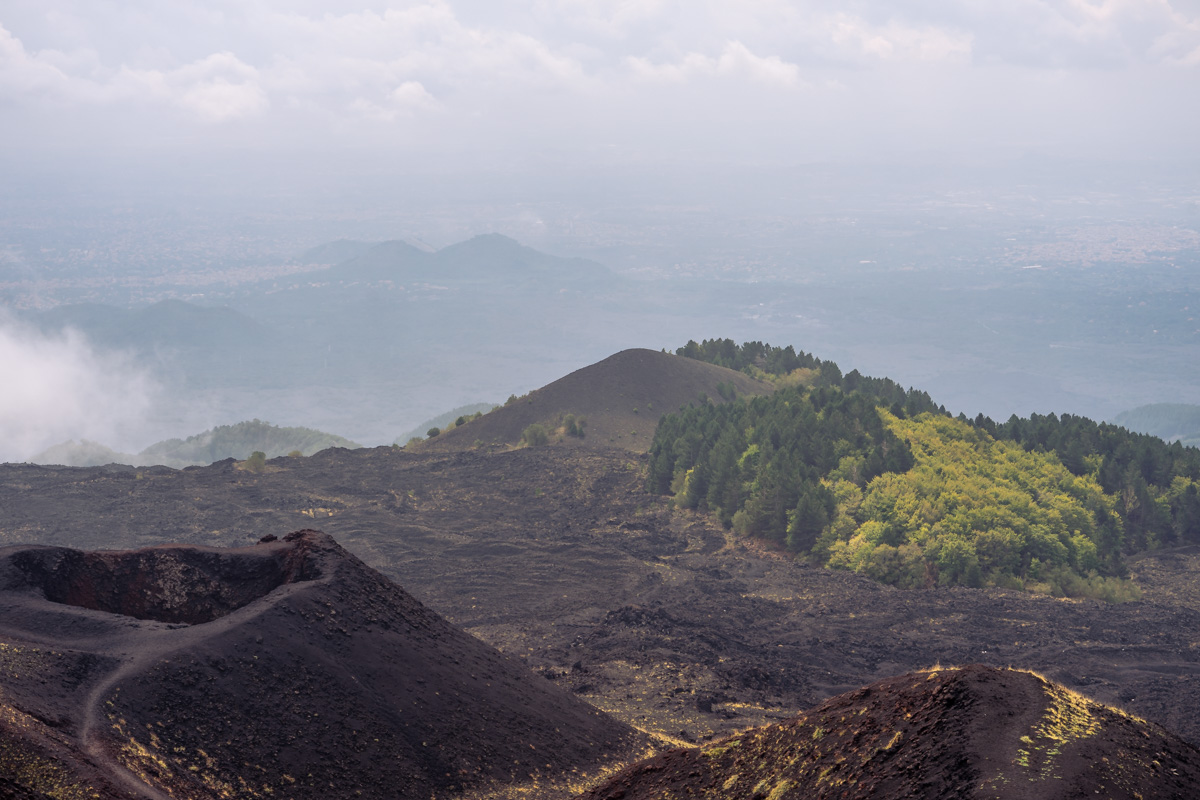 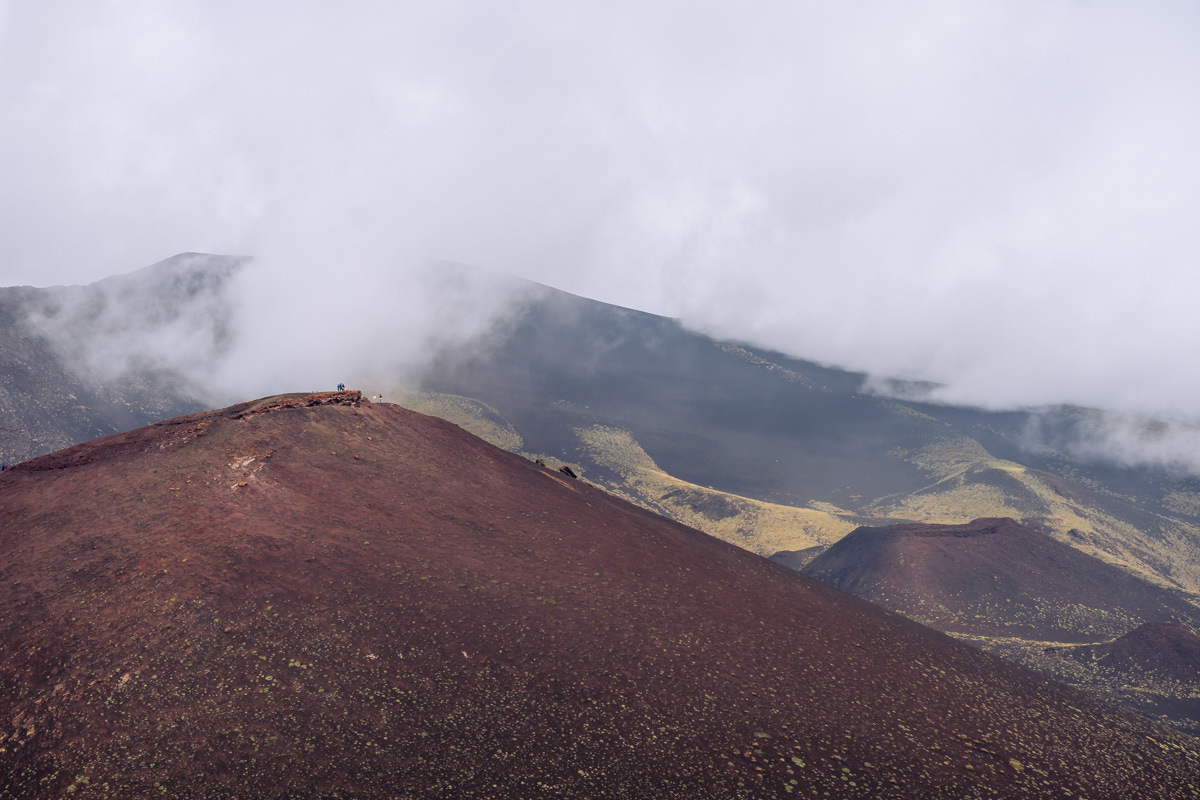 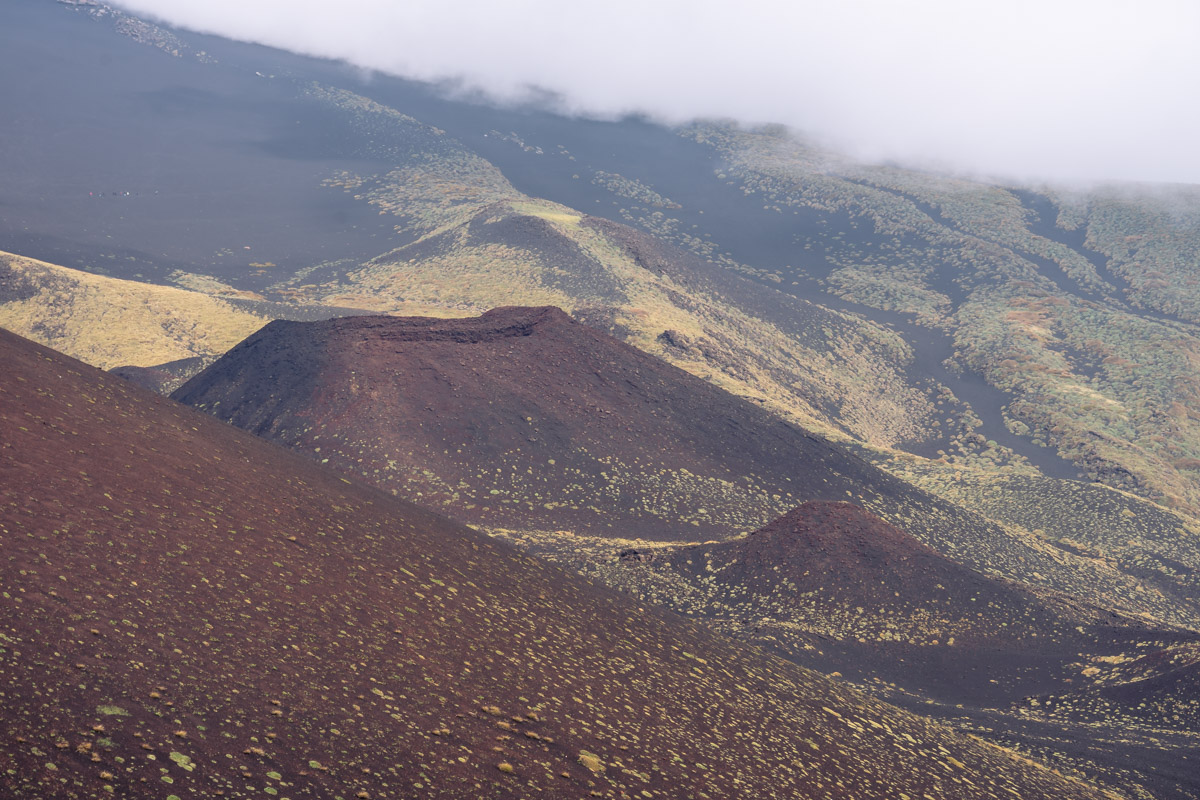 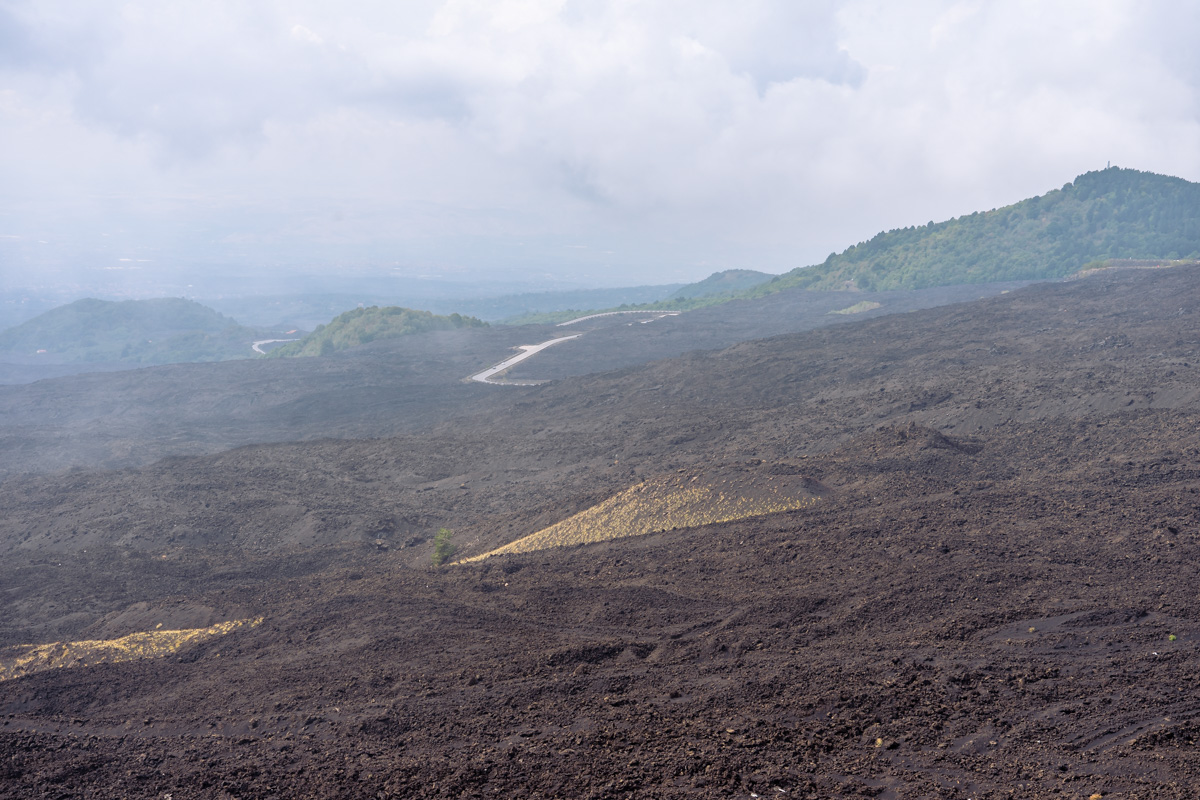 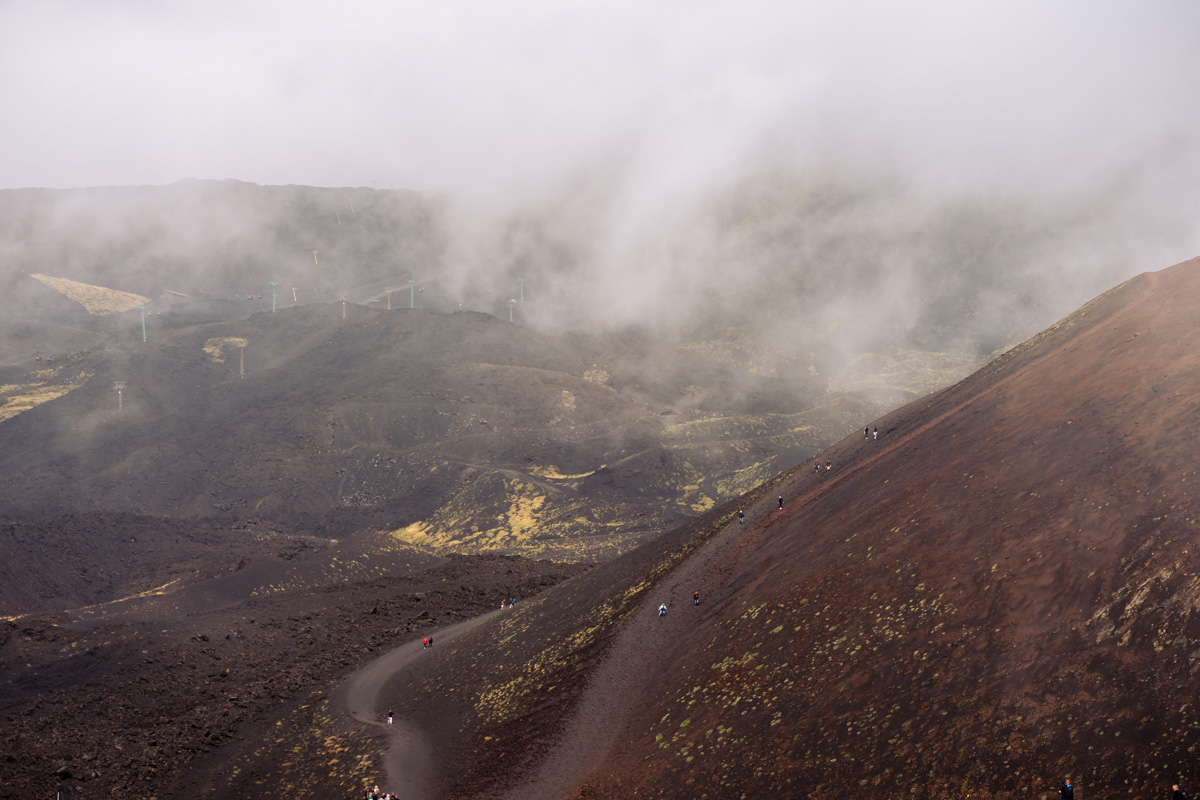 In this direction – too much of a haze even for the most powerful post-processing software – is Catania, sitting proverbially in the shade of the volcano and constantly affected by its activity. 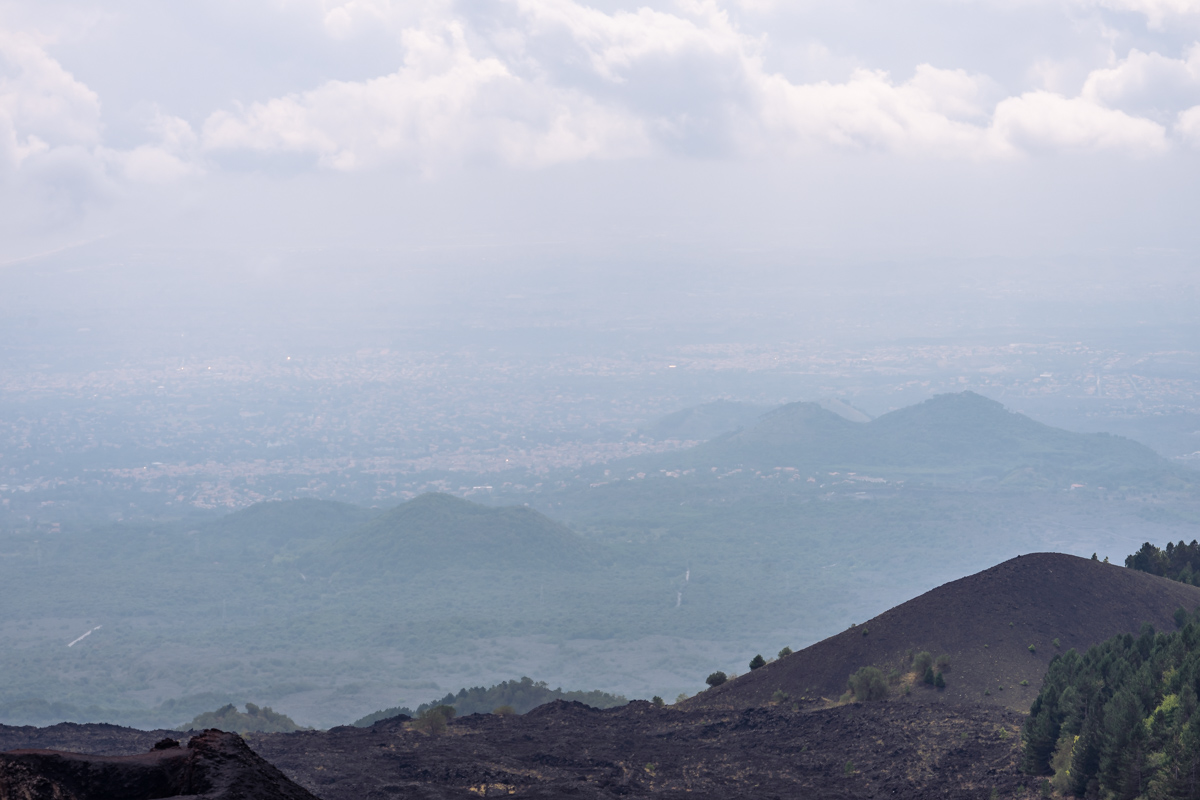 Silvestri Craters are among the most-visited attractions on Mount Etna, relatively easily accessible by car and never missed by bus tours. 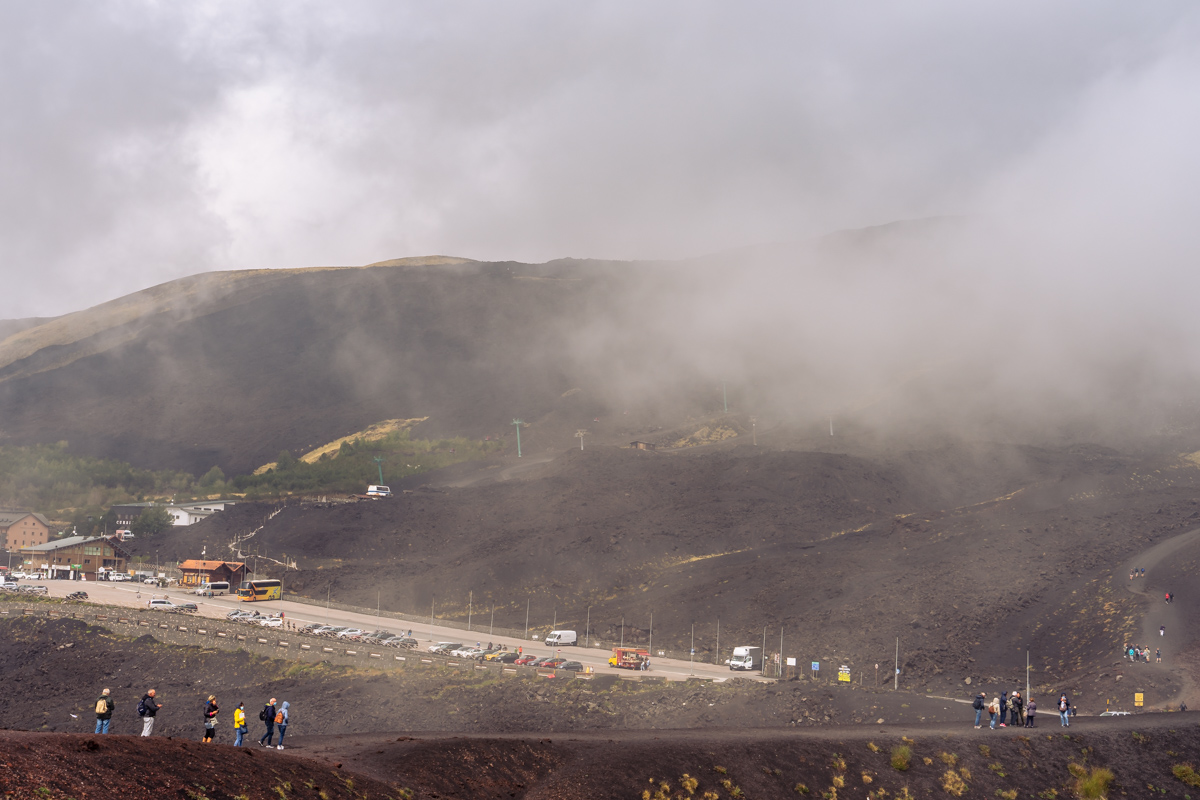 At a strategic point between the parking lot and the craters sits a local souvenir seller – who, for all I know, could be a real goatherd. 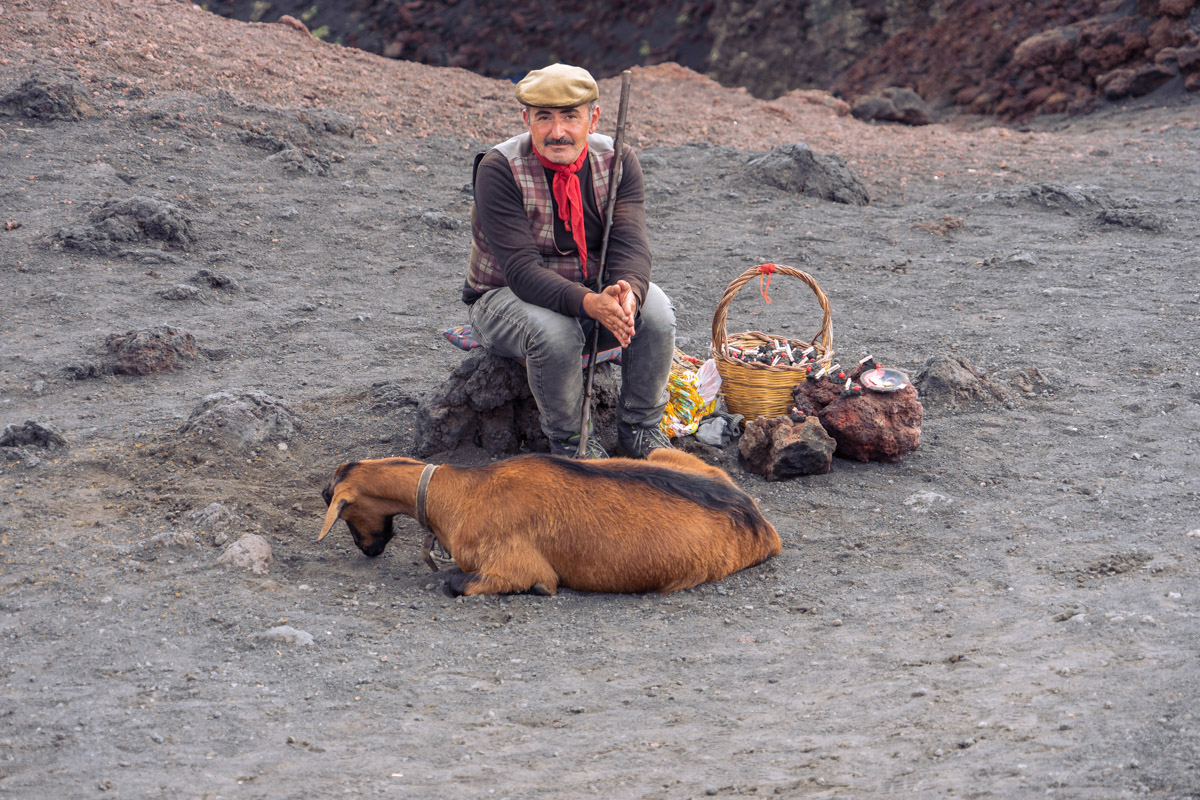 A honey vendor offering seemingly a hundred different flavors provided an additional diversion at the end of the tour. We tasted at least a dozen varieties. My favorite was the lemon flavor – although I am, admittedly, not much of a honey person. 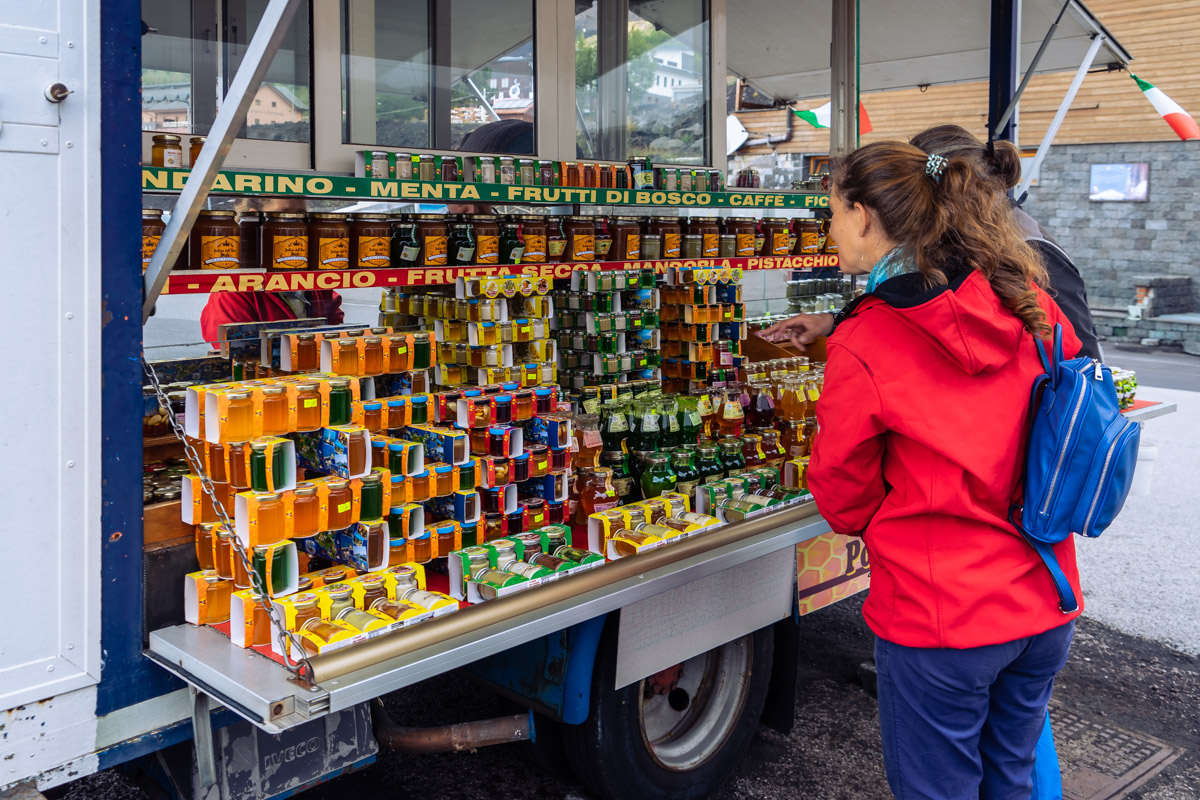 Visiting Mount Etna is possible via self-driving and hiking, but a guided Jeep tour may be the best way to become familiar with the volcano. Some guides may pick you up from your hotel (most likely if you are in Catania), but usual logistics involve meeting your ride somewhere at the foot of the mountain – in our case, it was on a square in Trecastagni. We met the guide at 9 in the morning, and he deposited us back to the same location around 1:30 pm. Mountain hiking shoes and extra layers of warm outer clothing were provided. Snacks and water were up to us to bring along.

This is only the fifth natural or mixed WH site on my list. On this evidence, I may become more inclined to avoid dropping such sites in the future.