The second-largest city in Sicily was even less of a certainty on our itinerary than Palazzolo Acreide. It is part of the same Val di Noto World Heritage site as Ragusa, Noto, Scicli, and since a big city always requires a bigger allocation of time, we initially considered leaving it out altogether in favor of additional smaller destinations. Barely any grand-trip-around-Sicily list of recommendations calls Catania a must anyway.

But our plans are never immutable. A couple of adjustments for the sake of reducing driving distances both before and during the trip meant that we had a few hours to reallocate to visiting Catania on the day that we shifted our base from Noto to Taormina.

Of course, it is worth repeating that a big city always requires a bigger allocation of time. Driving in and out of the city center is an enhanced challenge in larger locales (order-of-magnitude enhanced in Sicily). Parking requires getting to and fro. Add in time for lunch – and all we had to spare for seeing Catania was maybe an hour and a half.

So we walked through the famous fish market as it was wrapping up for the day, lingered on Piazza del Duomo, walked a few mostly pedestrian central streets. All churches were predictably closed by the time we reached the city core around noon, and waiting until 4pm for them to reopen their doors was not an option. The meager photographic output reflects the sadly fleeting attempt at exploring the city.

The cathedral of Saint Agata, as impressive example of Sicilian Baroque of the early 18th century as can be found anywhere in Val di Noto. 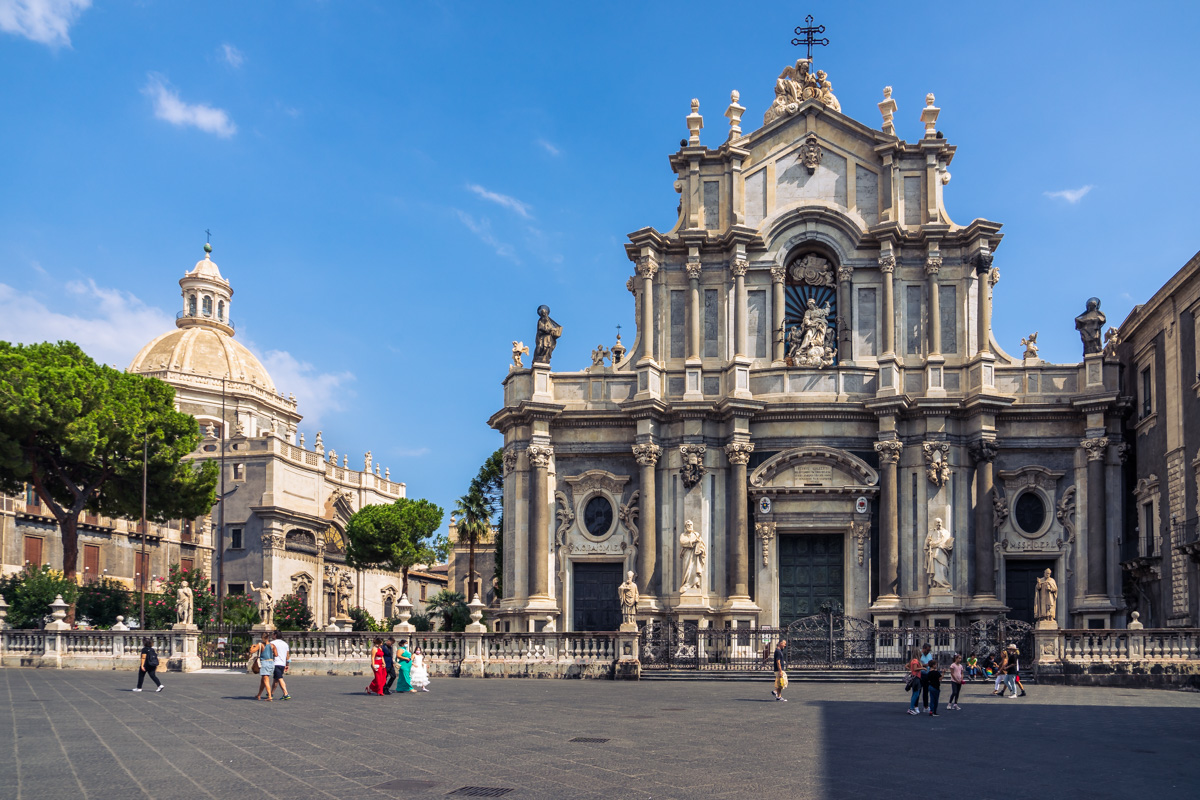 A wider view of the cathedral square with the great church as its main feature. 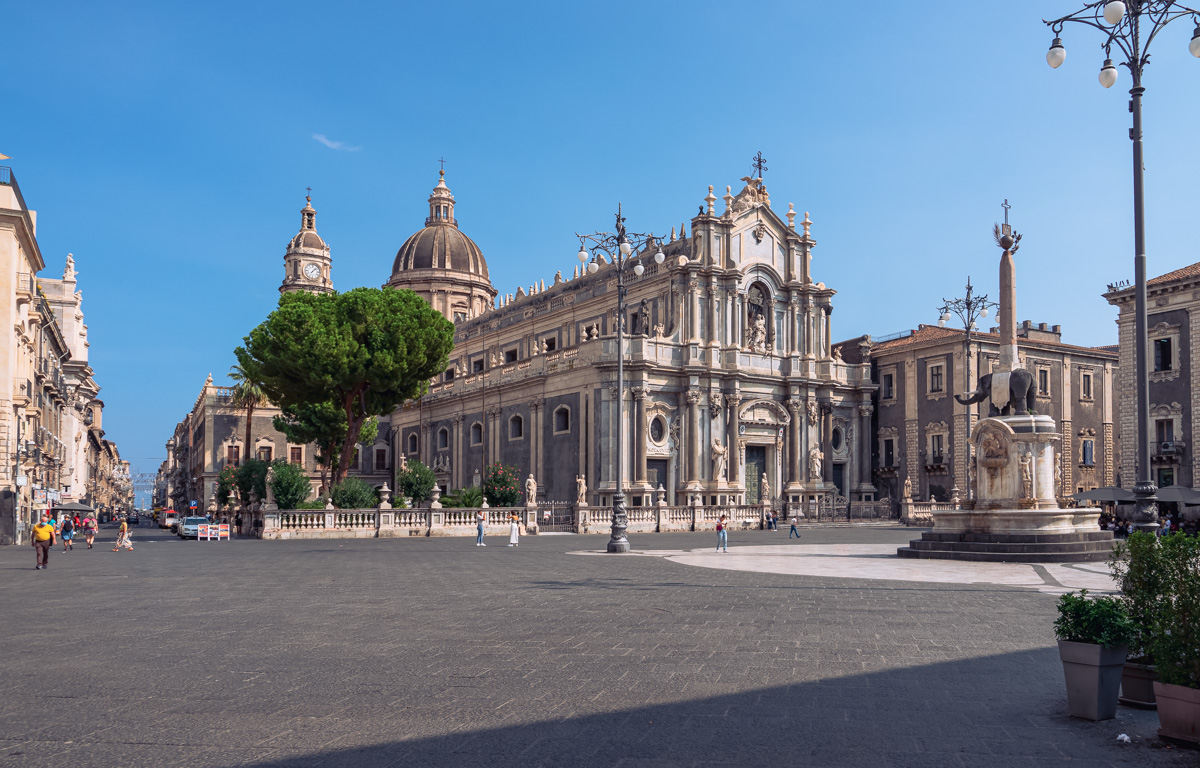 The Elephant Fountain, a city emblem, holds a prominent spot on the square. 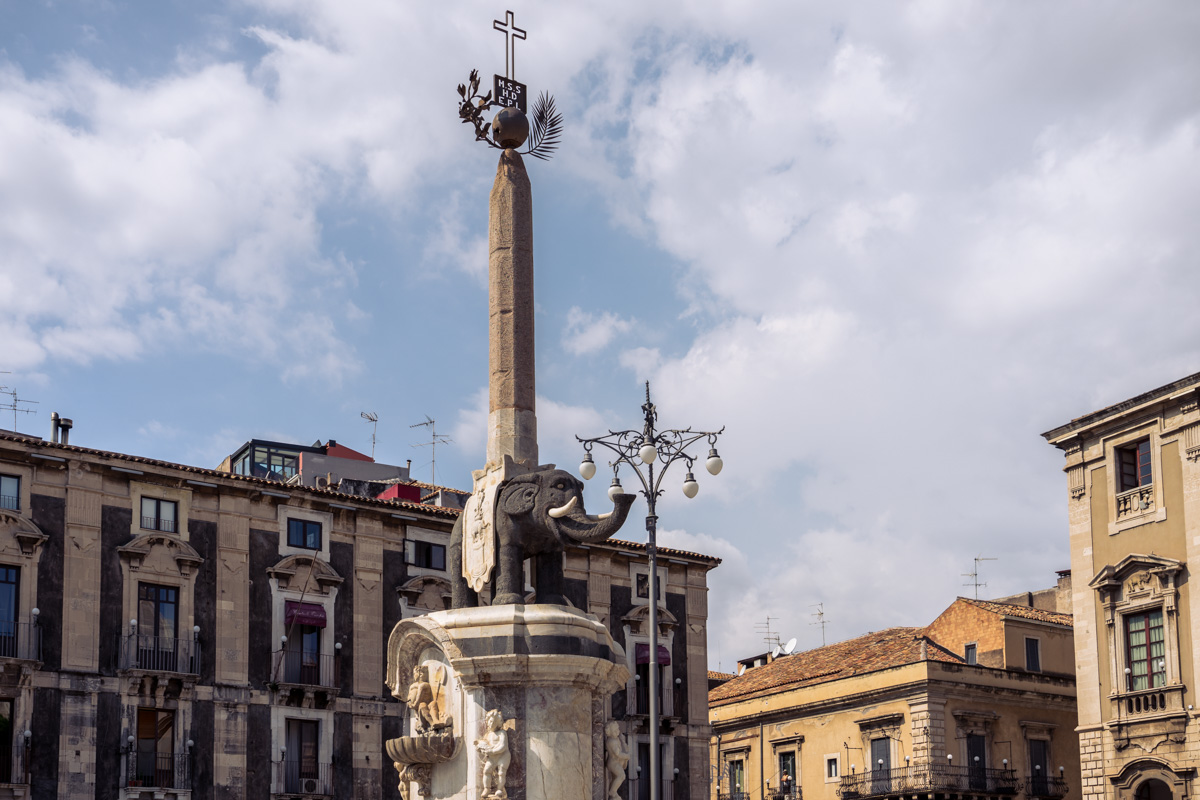 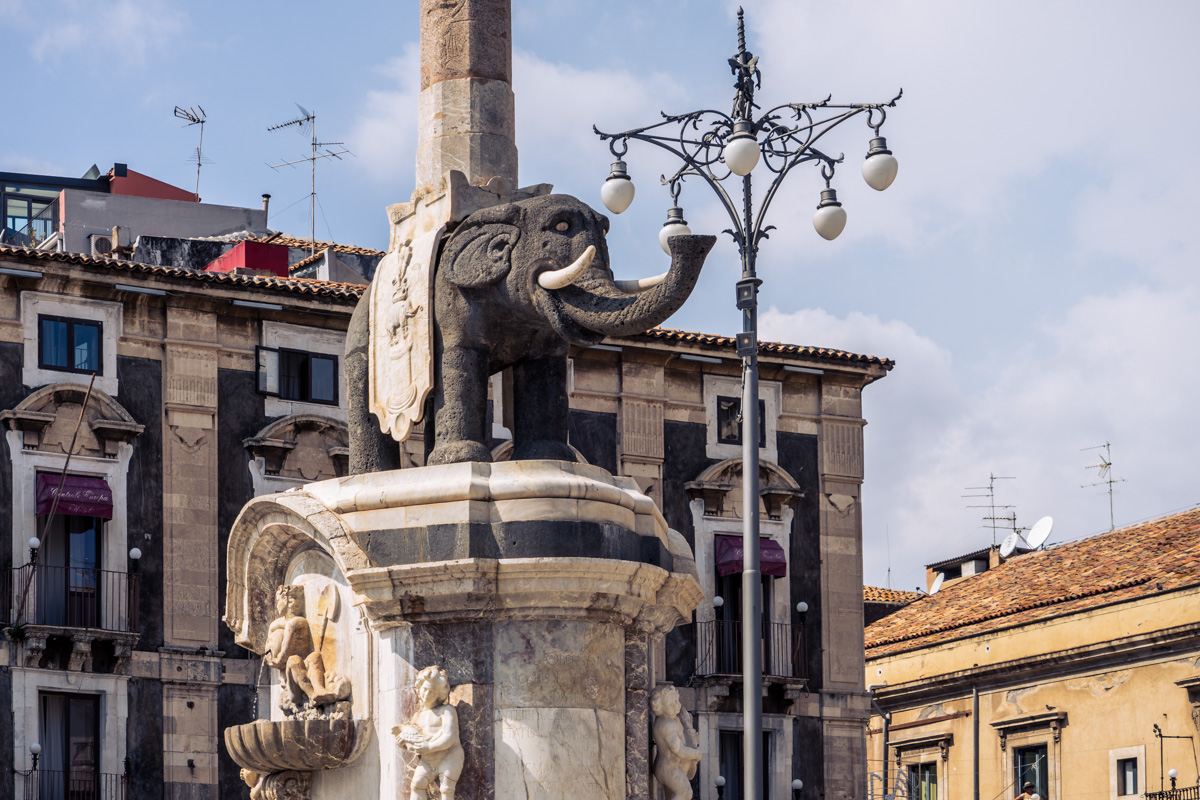 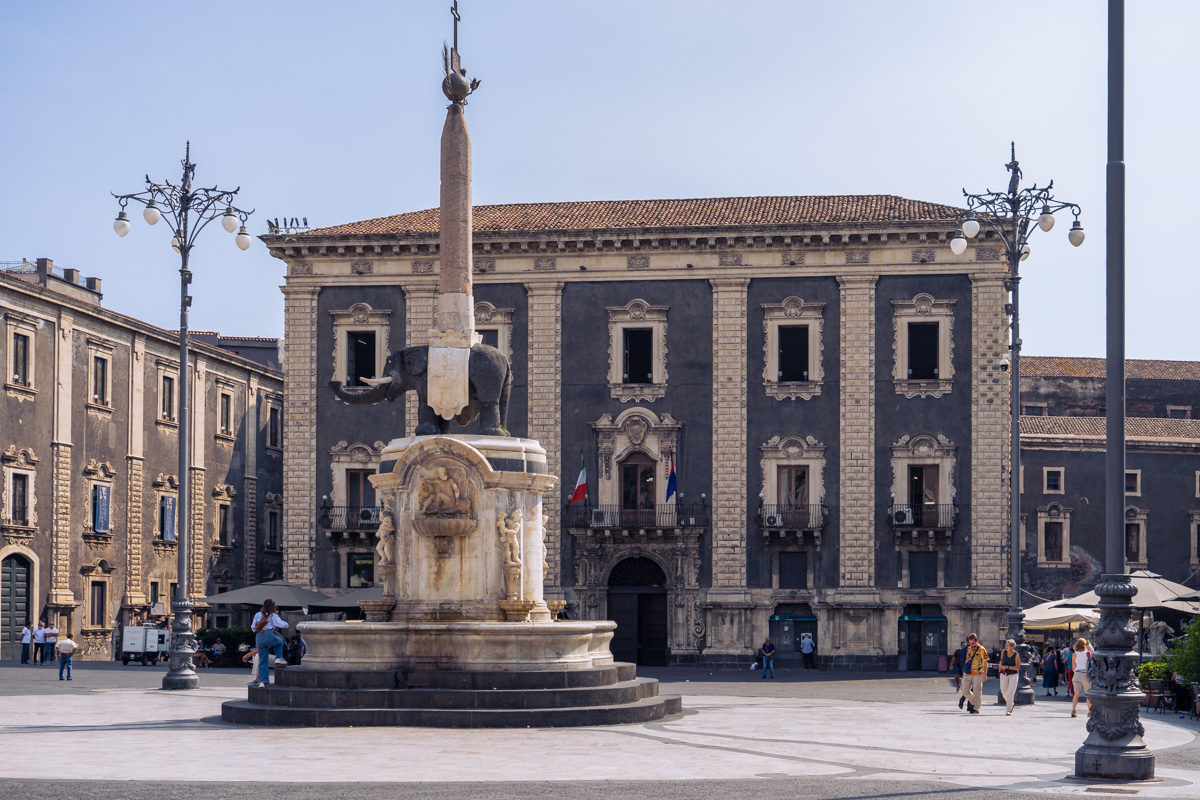 Another Baroque fountain in a corner of the great square, called Fontana dell’Amenano. 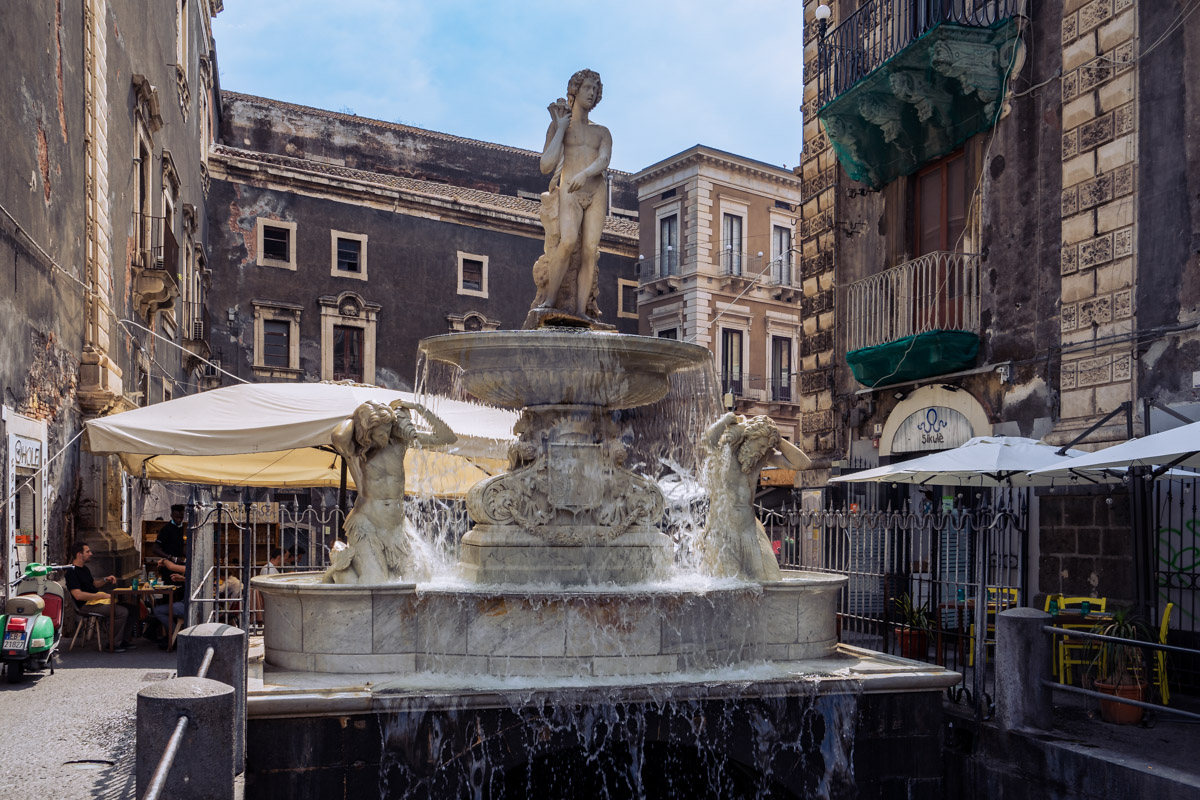 Porta Uzeda was built only a couple of years after the earthquake of 1693, which prompted rebuilding on a grand scale in Catania and other towns of Val di Noto. It is in the typical Catania Baroque style, characterized by alternating lava stone with white marble in decorative elements. 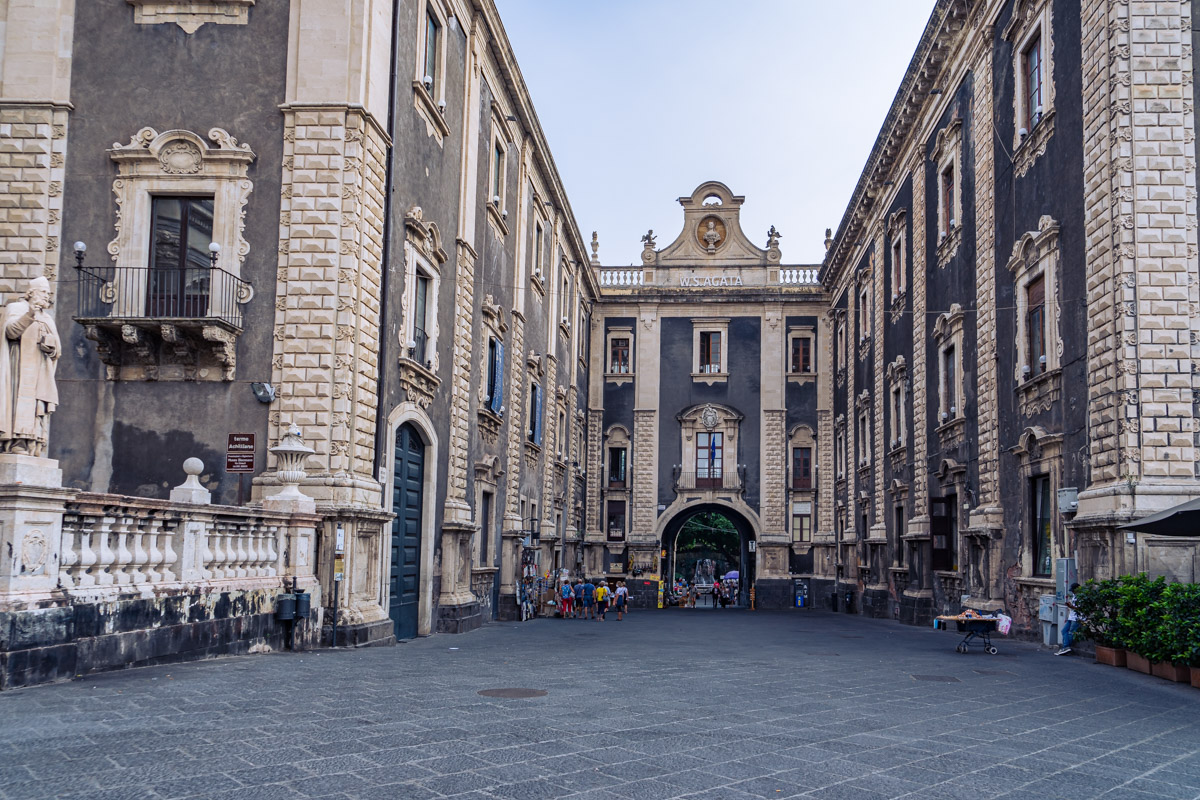 A not entirely obvious common feature of the aforementioned rebuild is that churches rarely preside over open squares. In case anyone wonders why my series on Val di Noto offers a very limited number of church façades, it is because not carrying wide-angle lenses makes it nearly impossible to get a non-crooked view of the façade from the street level when the farthest you can stand back is just a dozen yards. Double that number of yards gave me a passable chance of capturing the façade of Basilica della Collegiata. 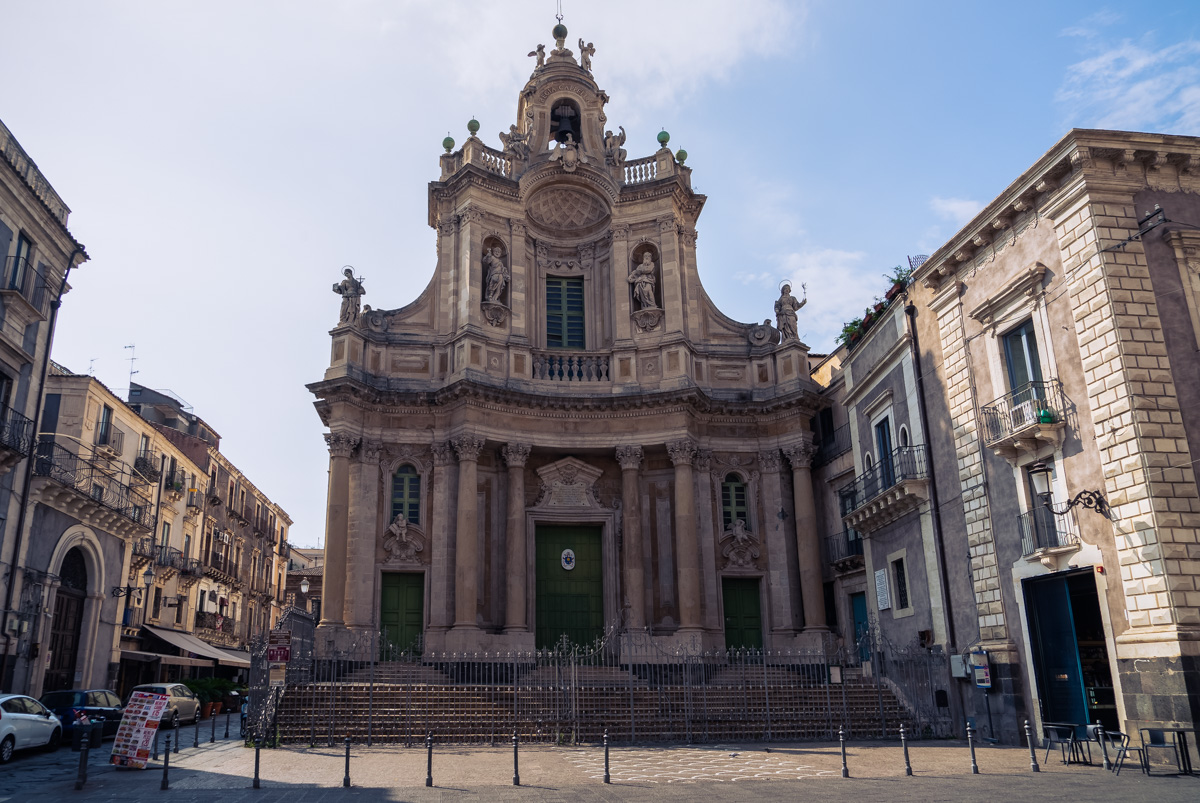 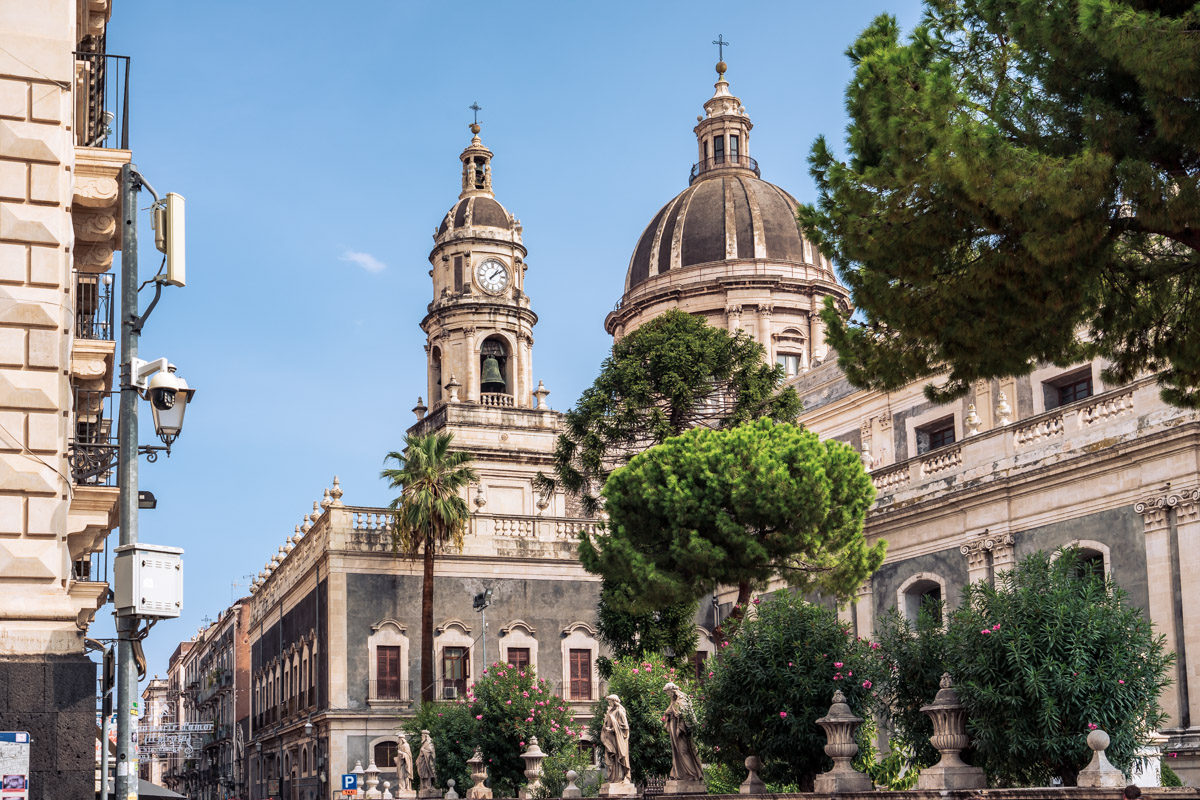 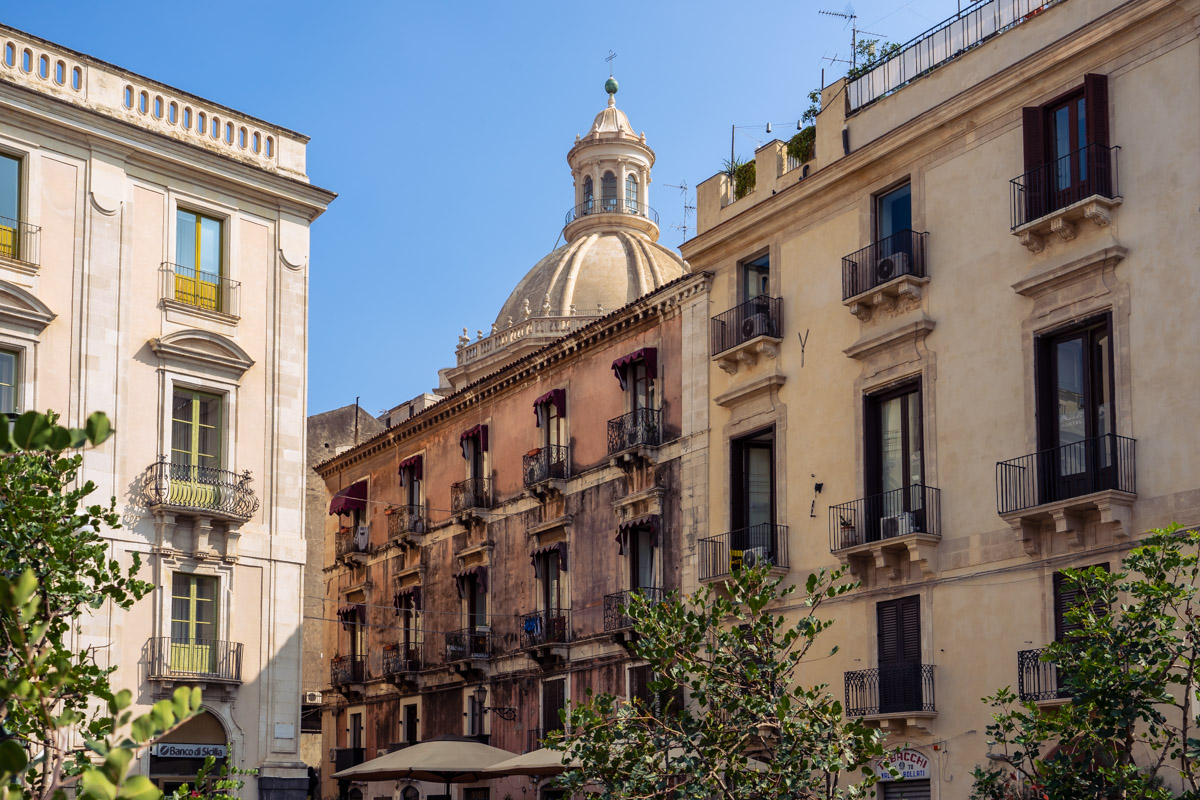 The better shots in Catania turned out those taken with the longer focal lengths alongside streets. This is the eastward view along Via Garibaldi towards the cathedral. 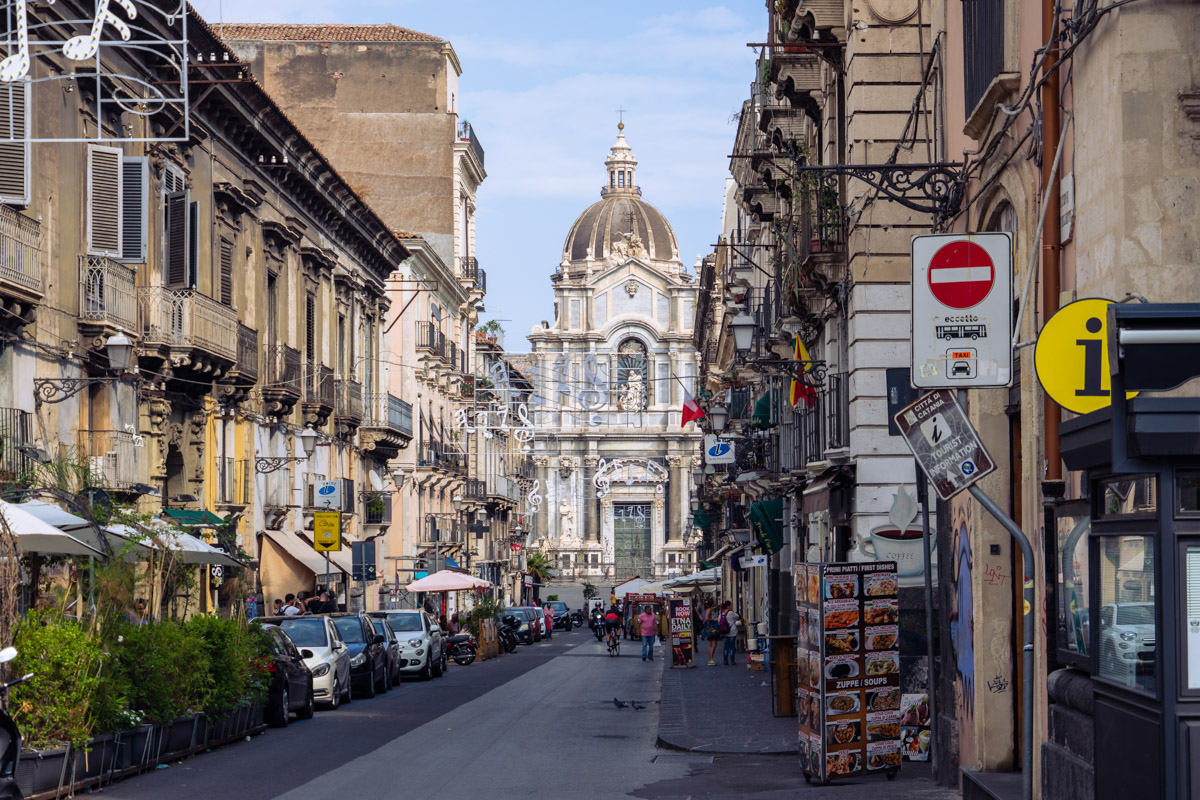 The opposite view from roughly the same spot towards Porta Garibaldi (aka Porta Ferdinandea), more than a kilometer away. 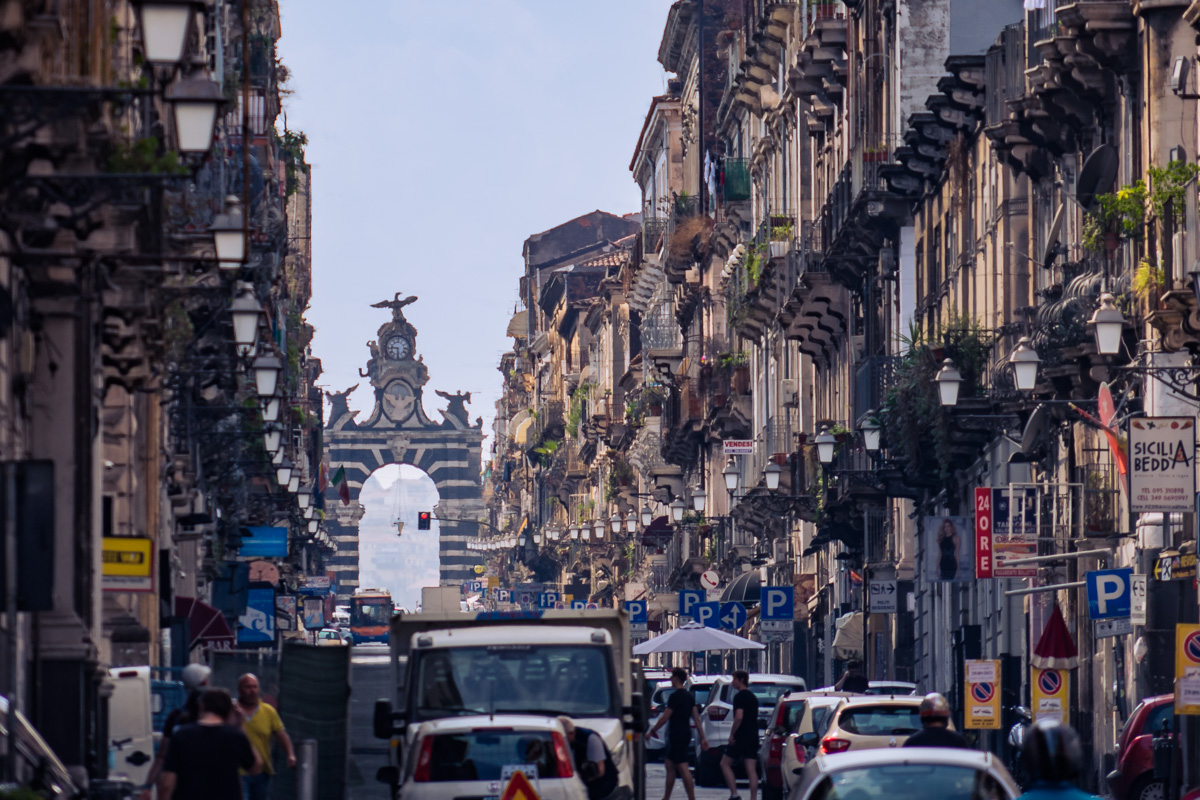 The southward view from the University Square towards Porta Uzeda. 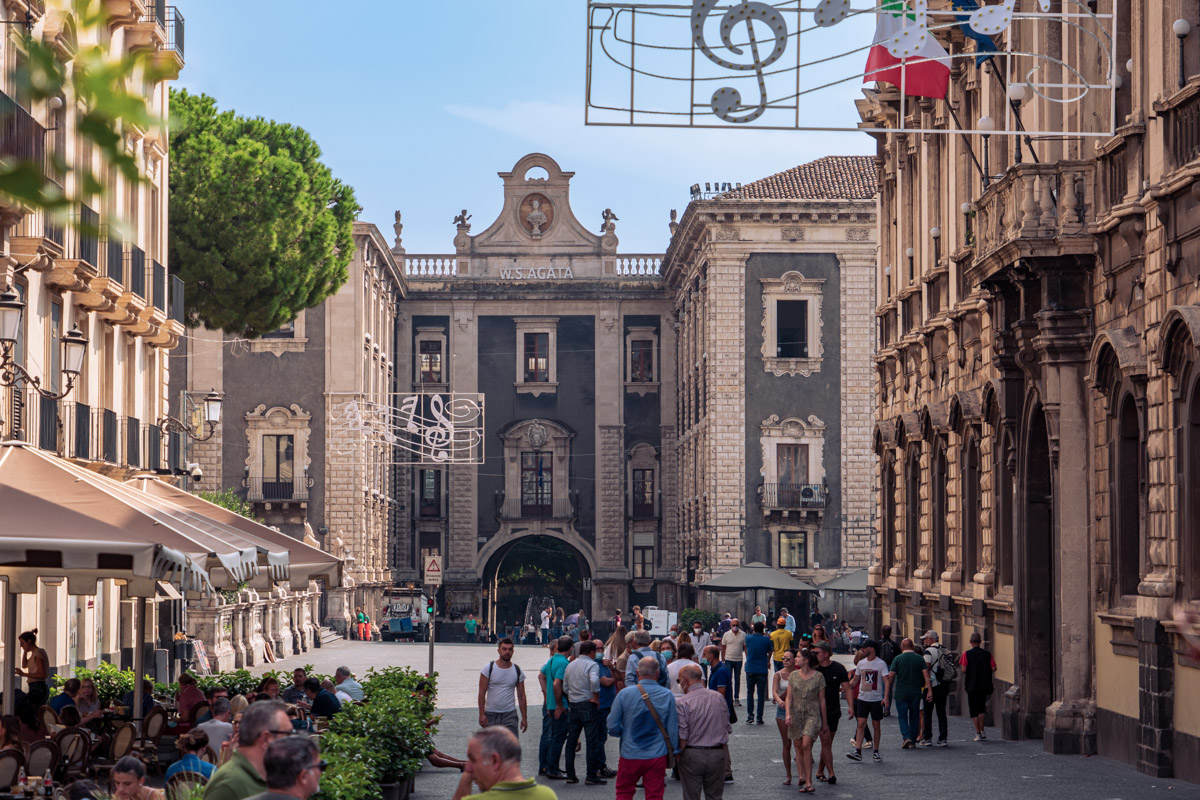 The southward view along Via Crociferi, one of the main clusters of post-earthquake architectural masterpieces. 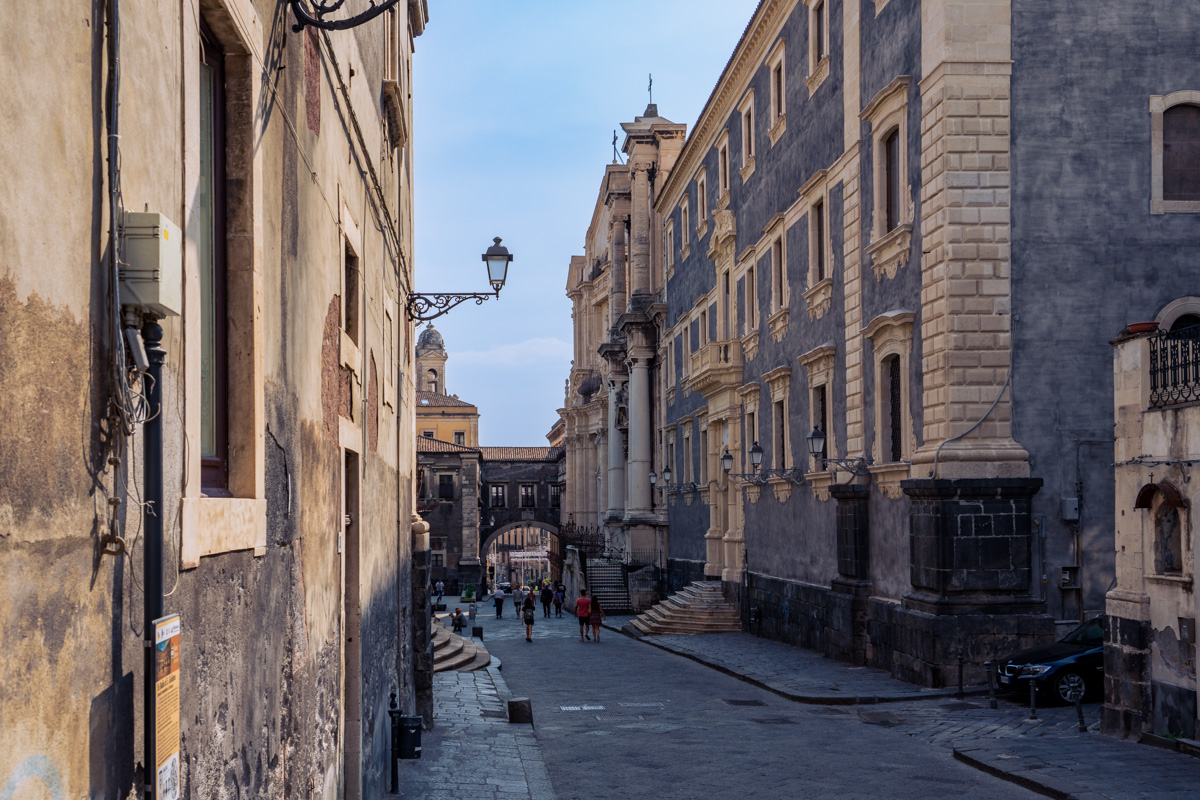 The northward view along Via Zurria towards the city core, with the twin domes of Chiesa di San Francesco d’Assisi in the distance. 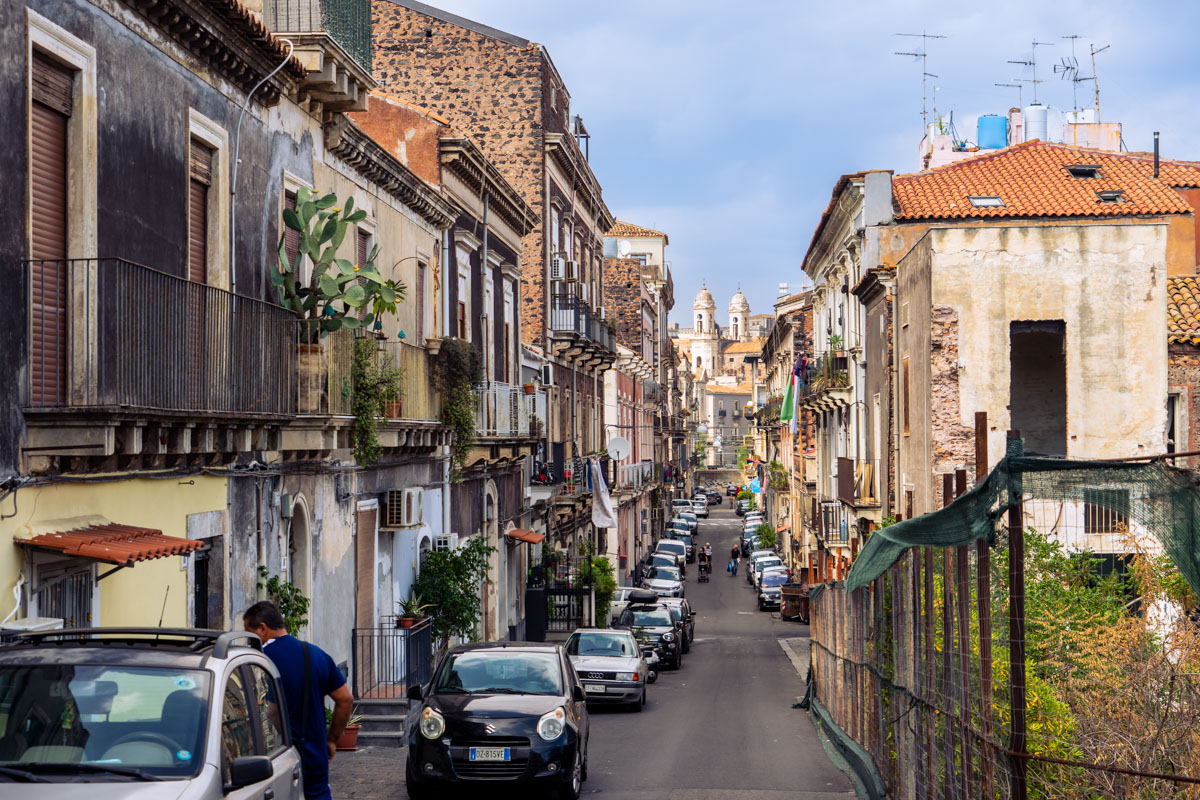 And a couple of examples of balconies and window portals that we came to admire so much in the area. 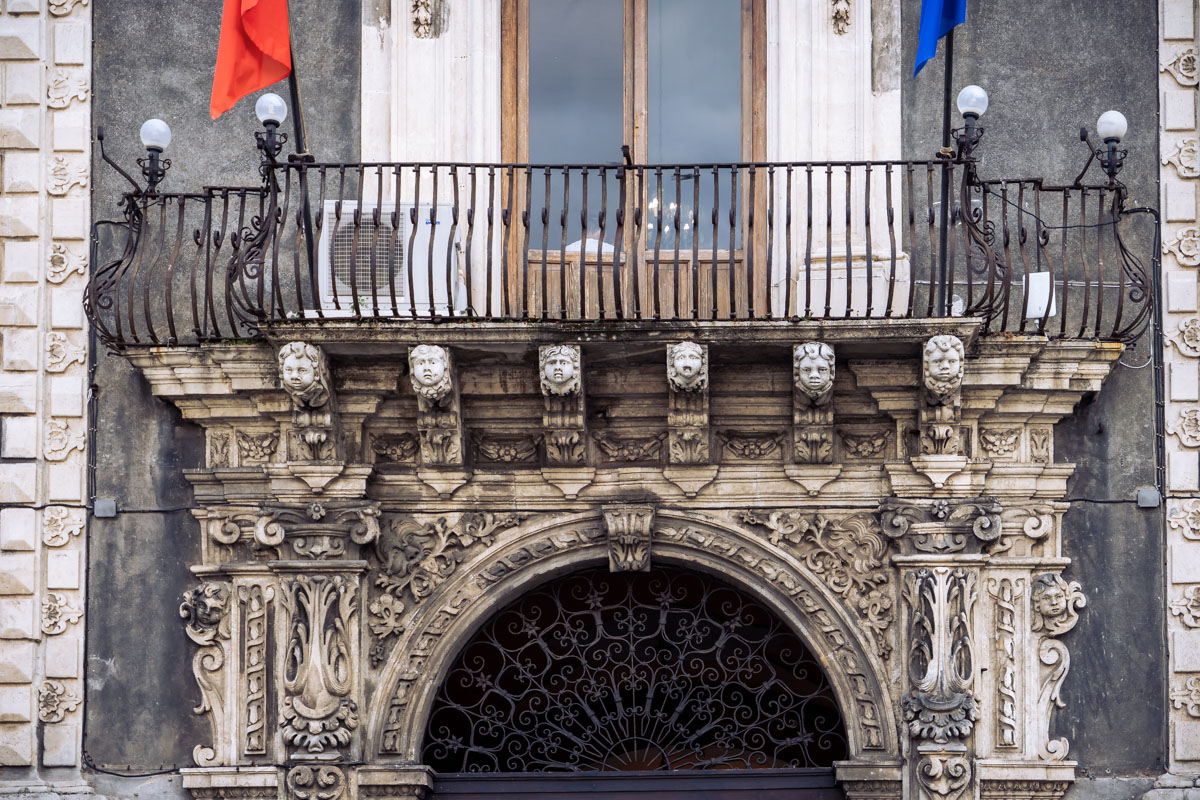 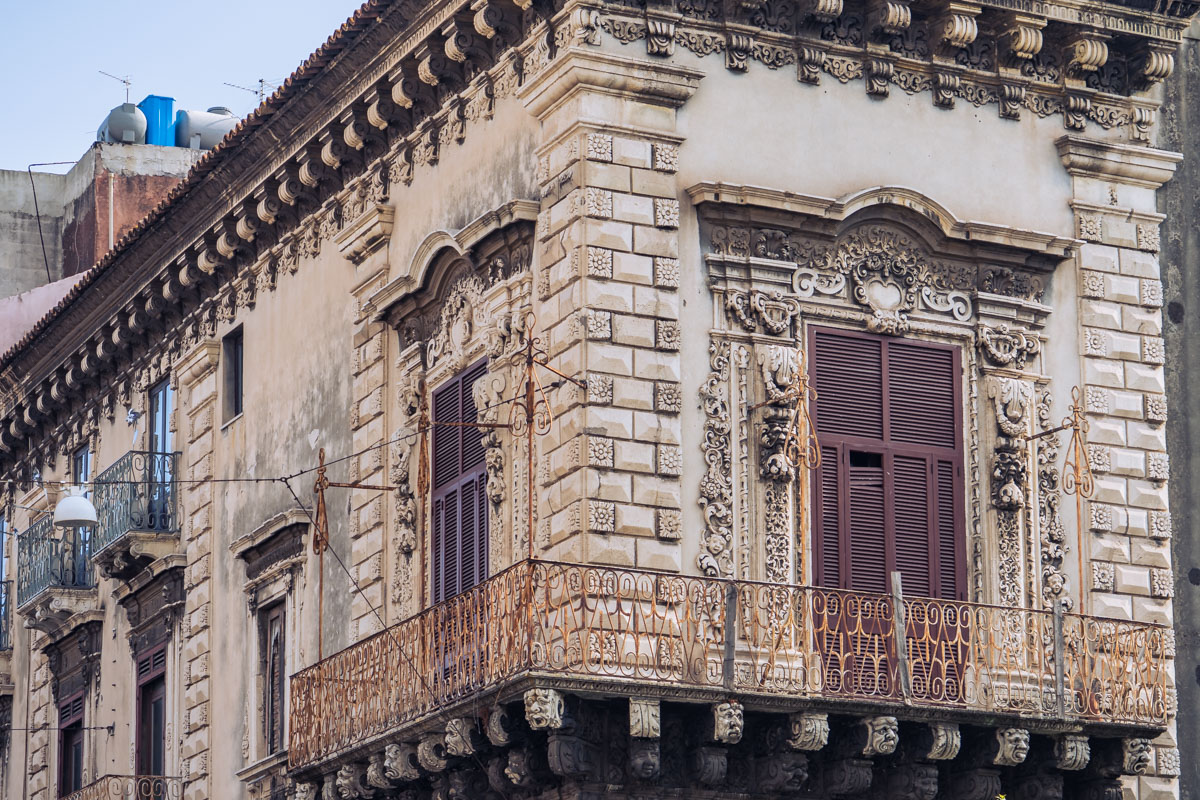 I suspect that anything less than half a day would not do Catania justice, especially considering that church interiors are, according to all available evidence, quite resplendent, and there is a large Roman Theater complex worth visiting, plus a palace or two. At least, we were able to form a firm impression that it may be well worthwhile to spend more time here on our future visit to Sicily.

And with that, we will be leaving Val di Noto and proceeding to other places in the eastern part of the island. Three other locations in the serial site (Modica, Caltagirone, and Militello) did not make the final cut, but we certainly explored this World Heritage property in non-trivial depth.