Scicli is enough off the beaten track so a fair portion of the WH-focused community considers it a favorite among the towns comprising Val di Noto serial site. It is bright and clean, its compact central area is easy on the eye, and the ratio of locals-to-visitors is higher than elsewhere even in non-Covid times.

All that being true, Scicli is less visited probably precisely because it is, on balance, less impressive than the other inscribed properties of Val di Noto. I say “probably” in a manner of a disclaimer. We came to Scicli at lunchtime, when all of the churches are customarily closed to visitors. Our overall impression may have ended up more laudatory if we had a chance to explore a few interiors.

Grand Baroque exteriors, in line with the main subject of the WH inscription, are found throughout the commune. For instance, San Barolomeo… 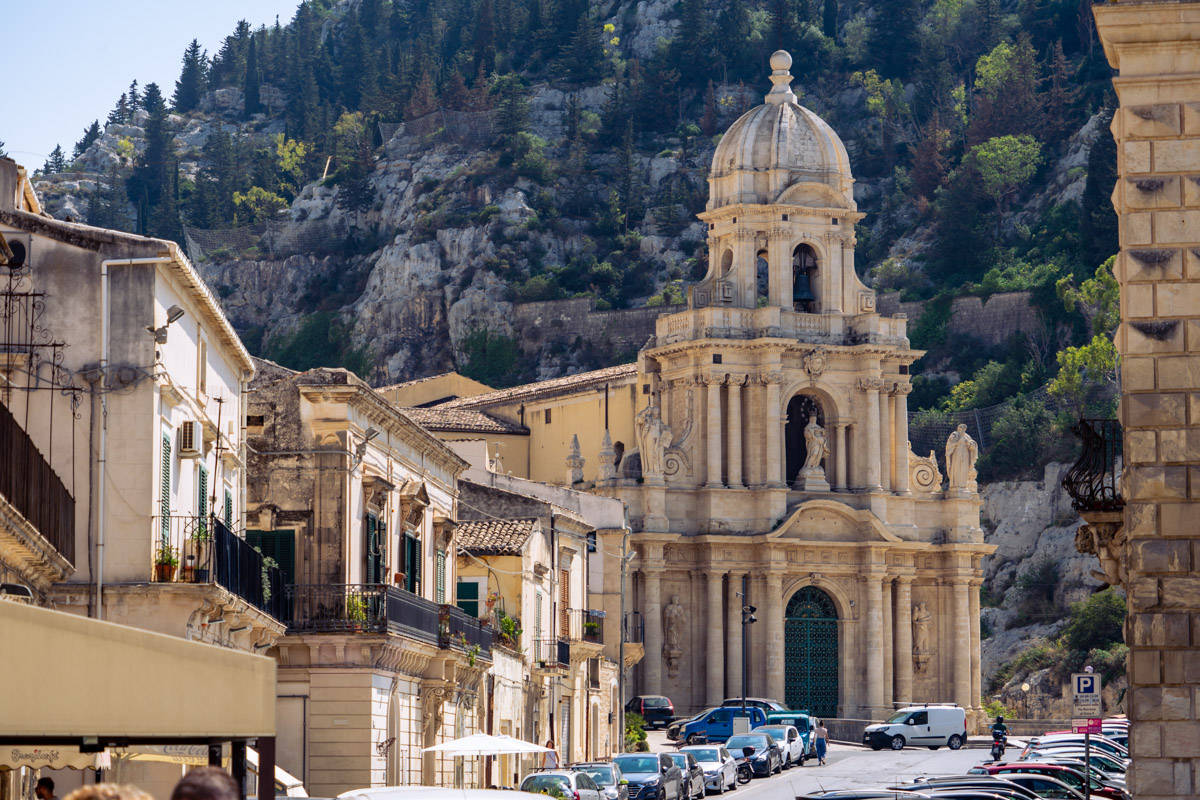 … or the Mother Church of Sant’Ignazio di Loyola. 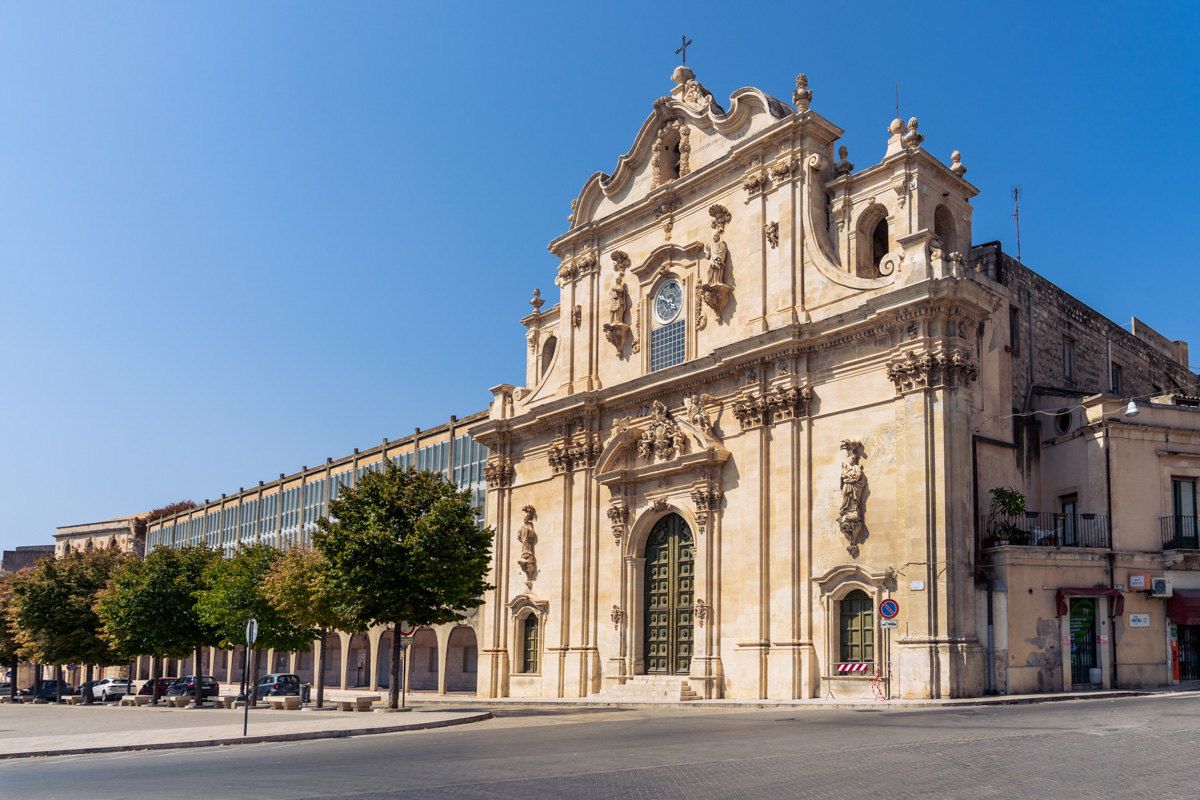 Neither of the above churches is in the formally inscribed WH area, though. In fact, only a small precinct centered on Piazza di Municipio is considered to be part of the World Heritage site, which includes three churches and a couple of palaces. Church of Archangel Michael would be a prime target for a visit if it were open, on account of its tiled interior. 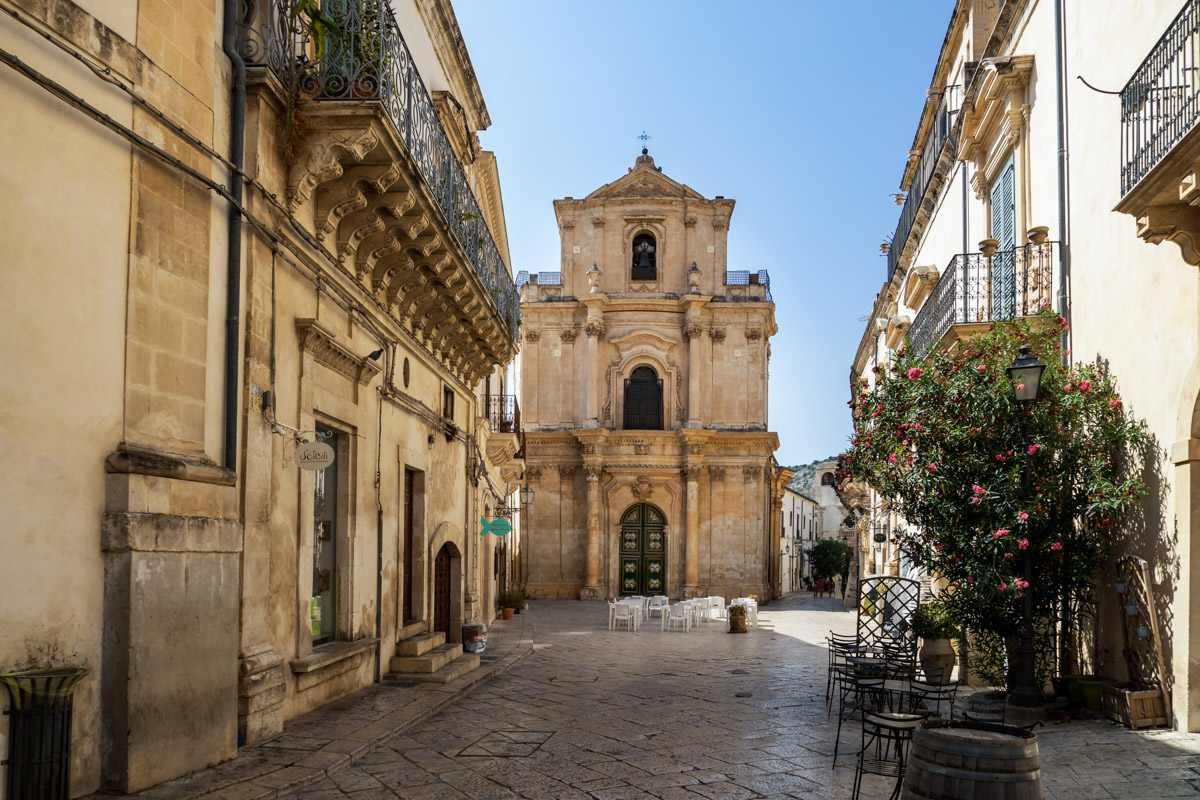 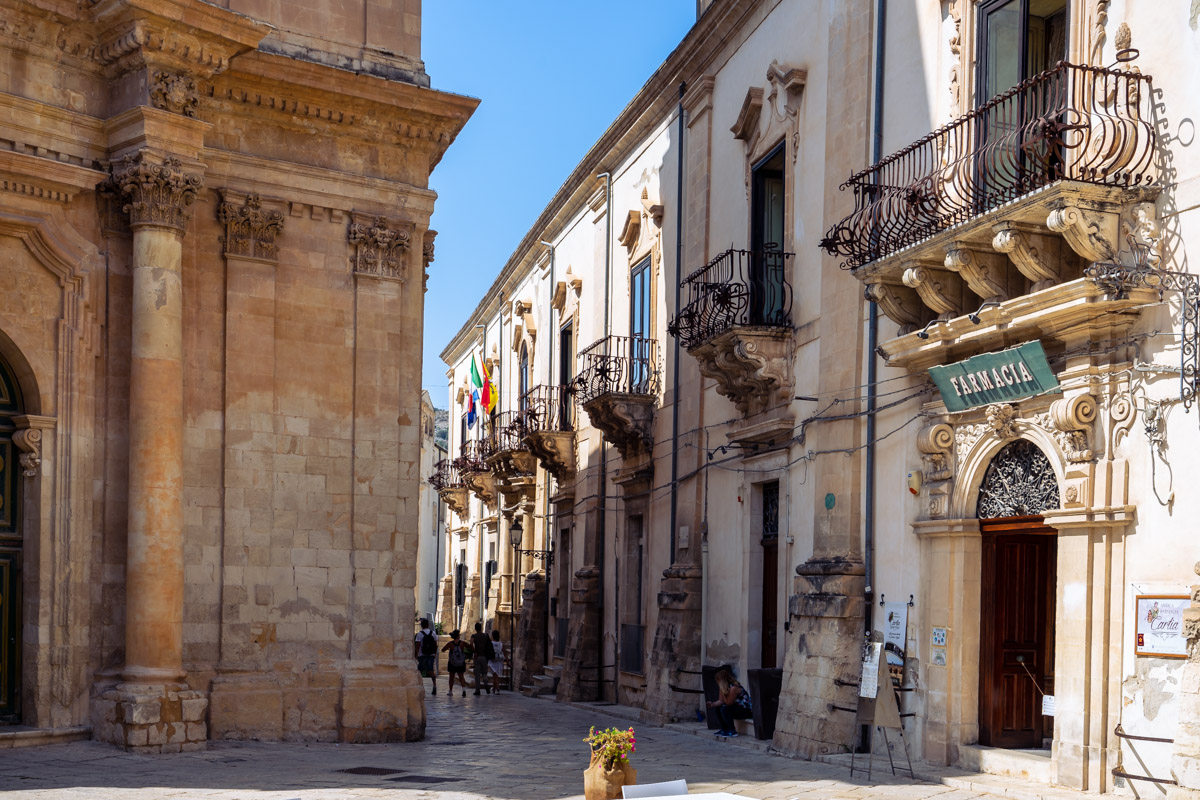 Not on the main square, but diagonally from it and formally included within WH boundaries, is the Palazzo Beneventano, outwardly the most eye-catching building in town. 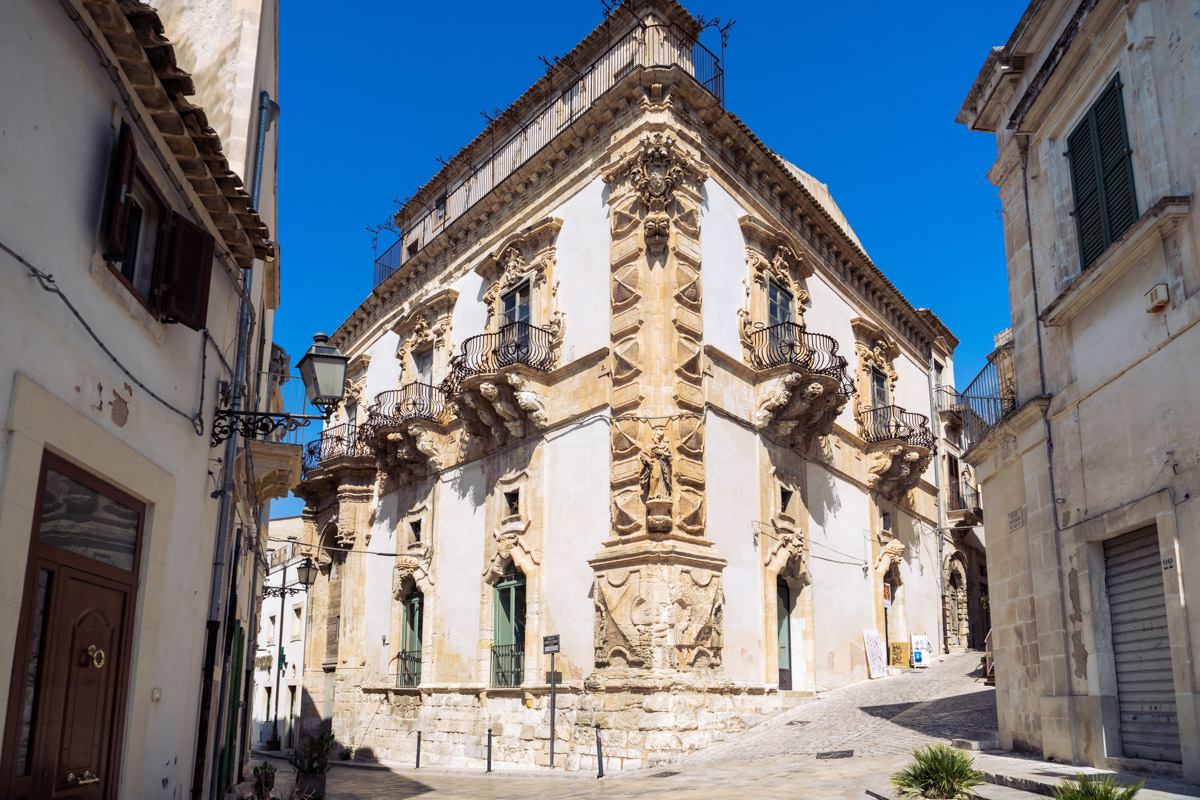 Ironically – in truth, inexplicably – this marvelous palace has absolutely no museum component. There is an antique store on the ground level, and the upper levels could be offices or residential apartments, for all I know, but you can only admire the exquisite exterior as you would a monument on a city square. It is still well worth lingering around and taking a few pictures of. 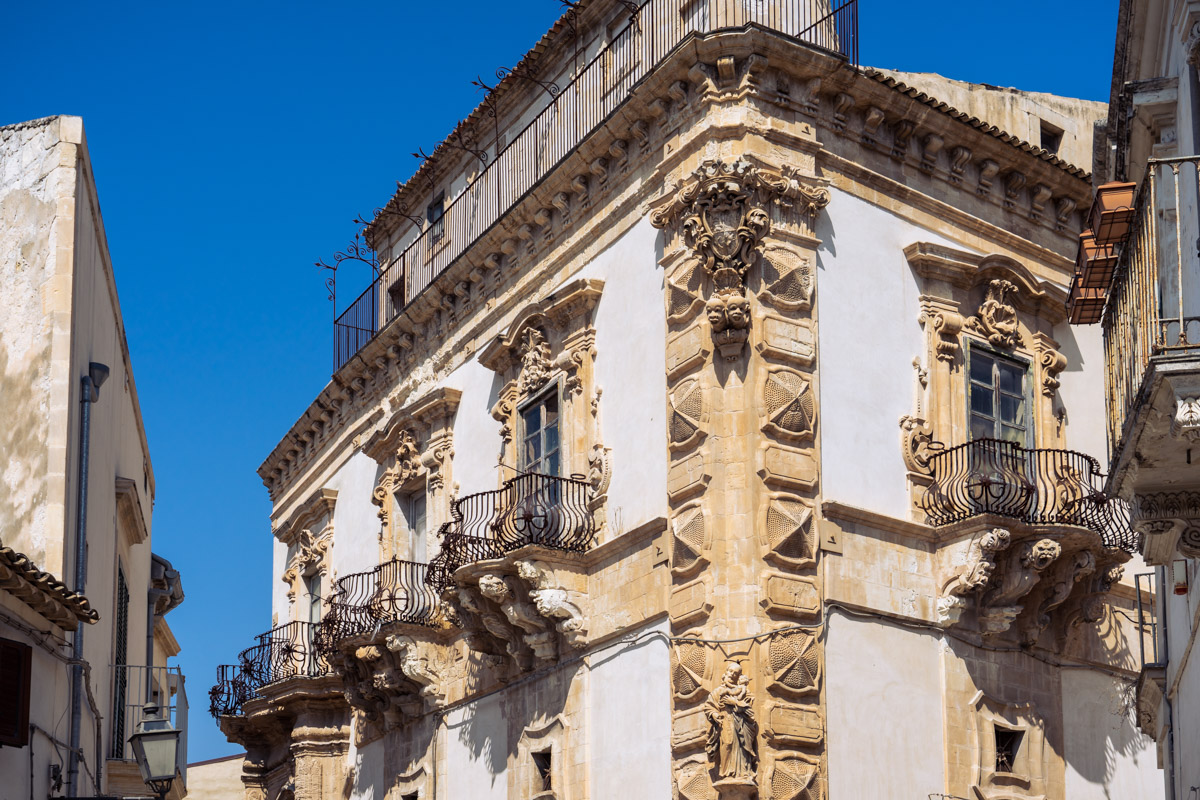 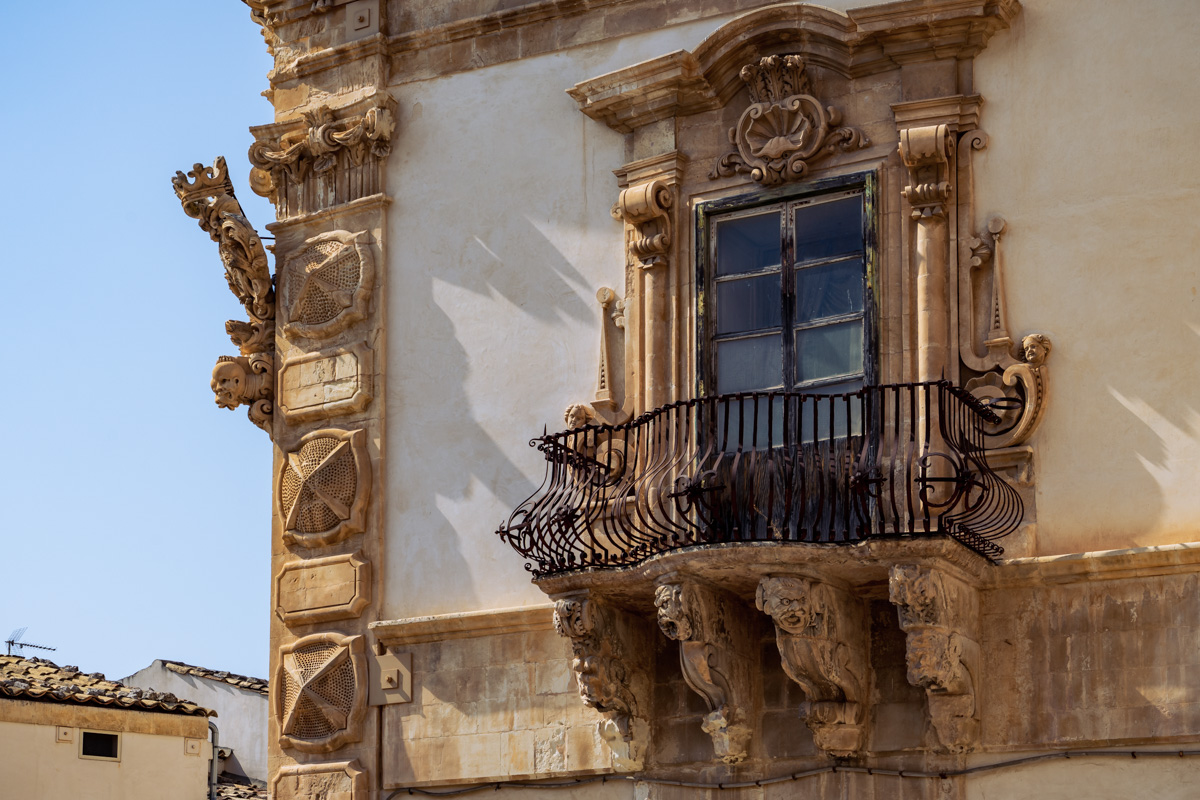 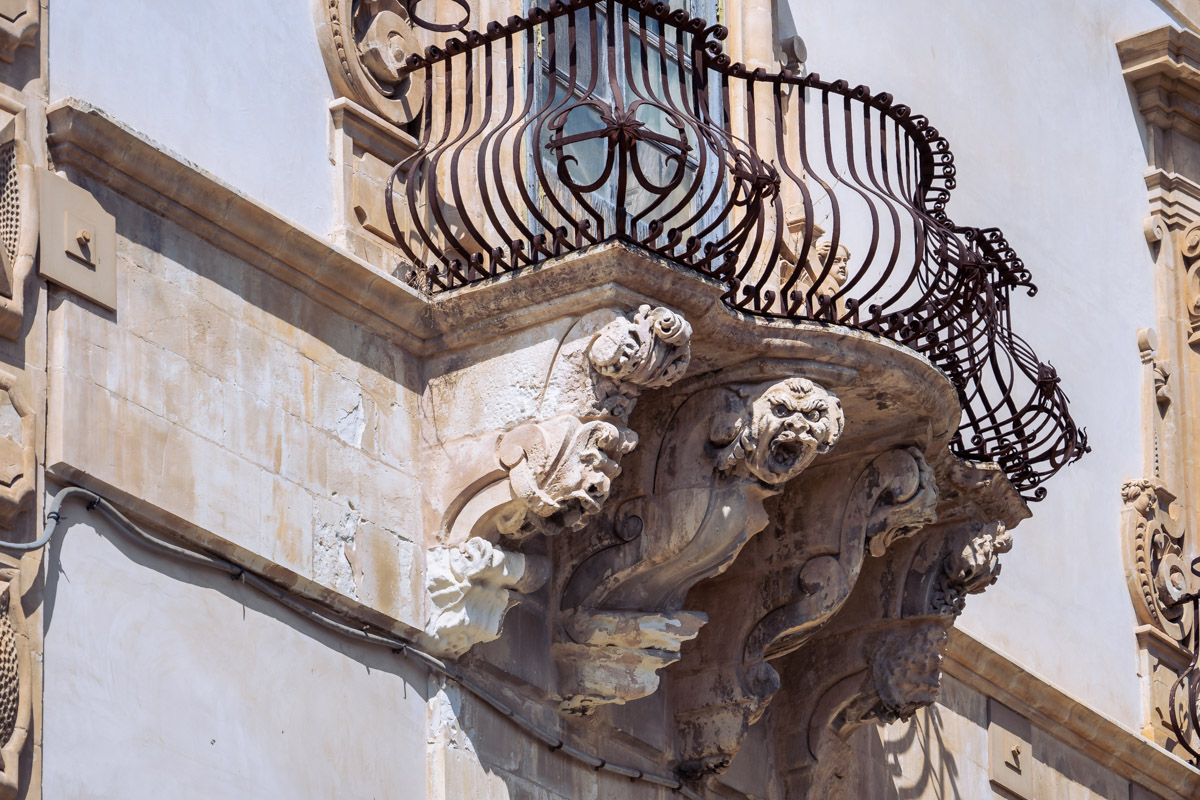 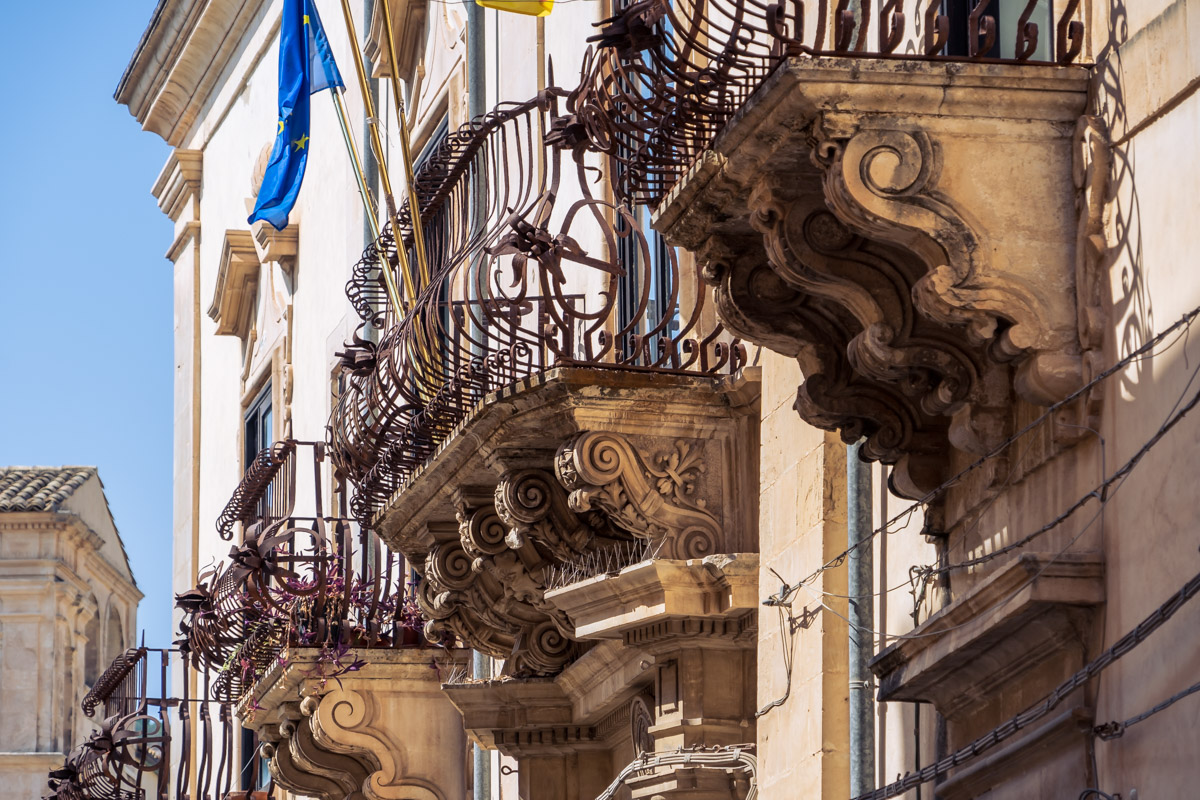 We actually stepped into Palazzo Spadaro, as it happened to be open. The cost of entry was fairly low and, like at the Palazzo Nicolaci in Noto, just about worth the 15-20 minute stroll through less than a dozen spaces. Not entirely without interest, but hardly a must. Here are a few illustrations. 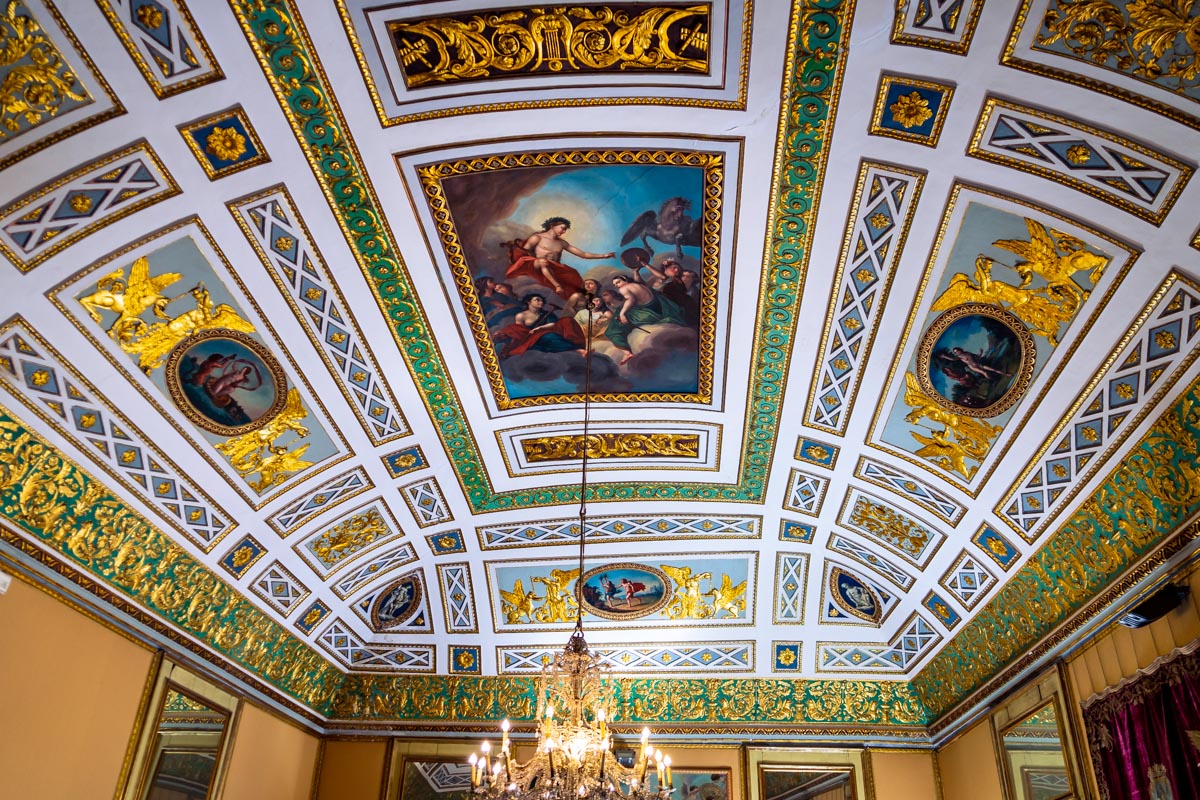 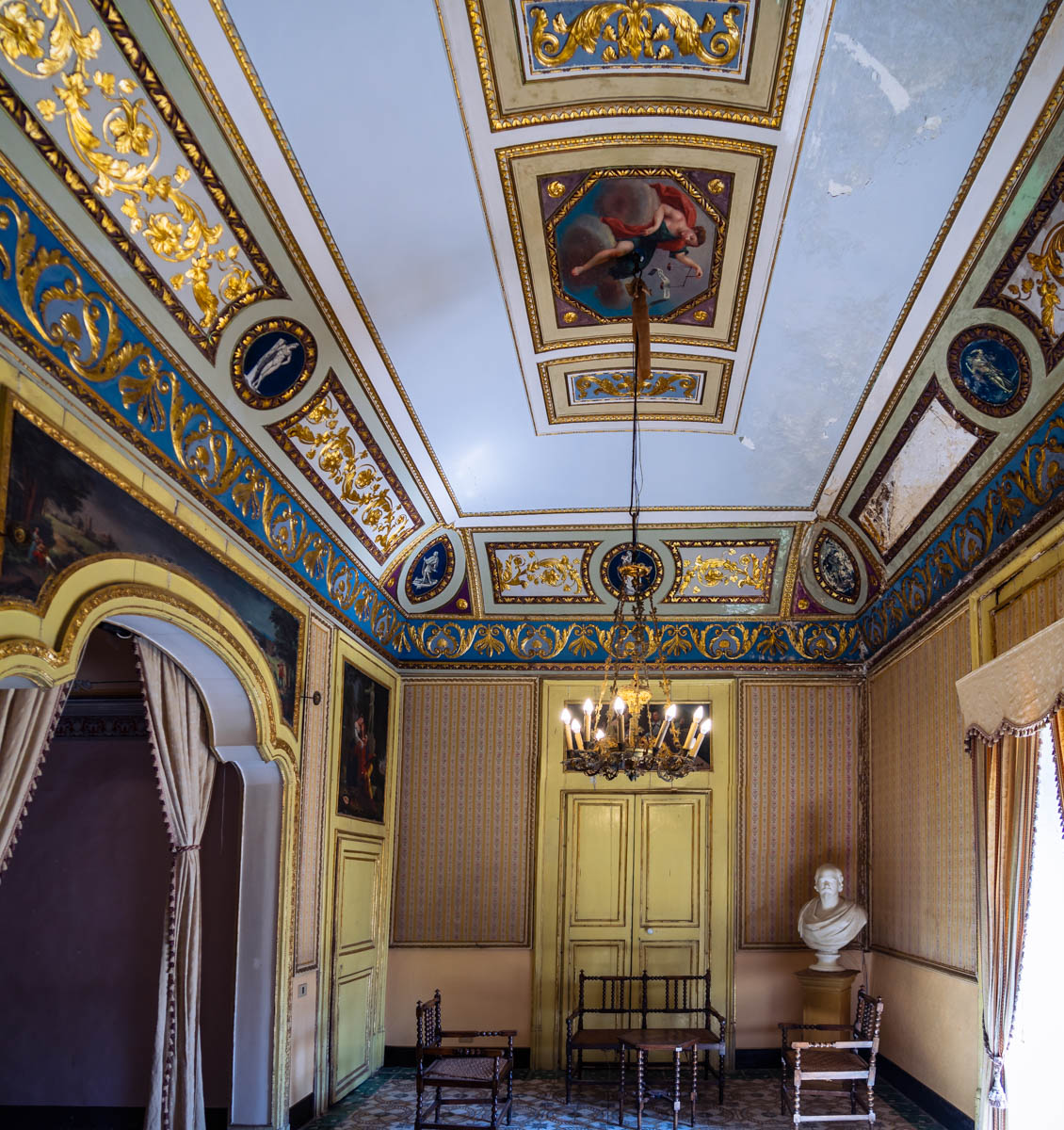 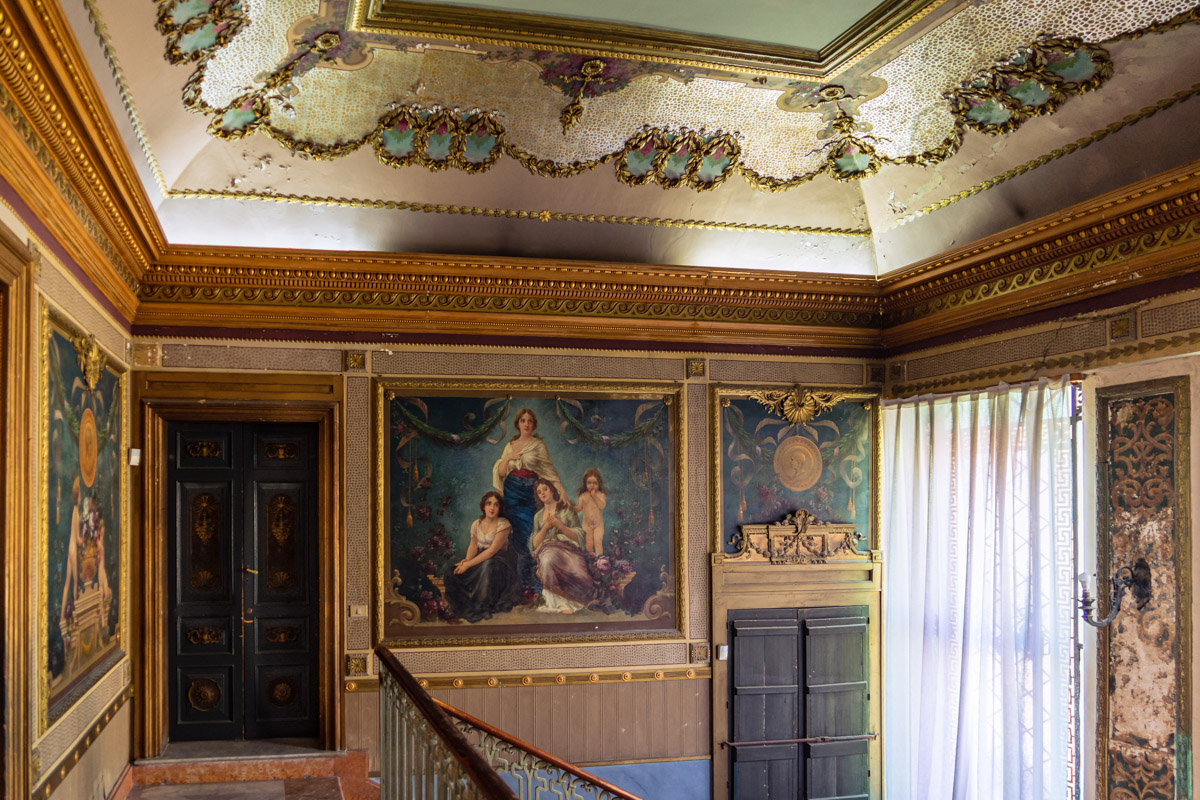 Beyond that, there are pleasing street perspectives and corners around the center of Scicli, but again, nothing overly extraordinary. 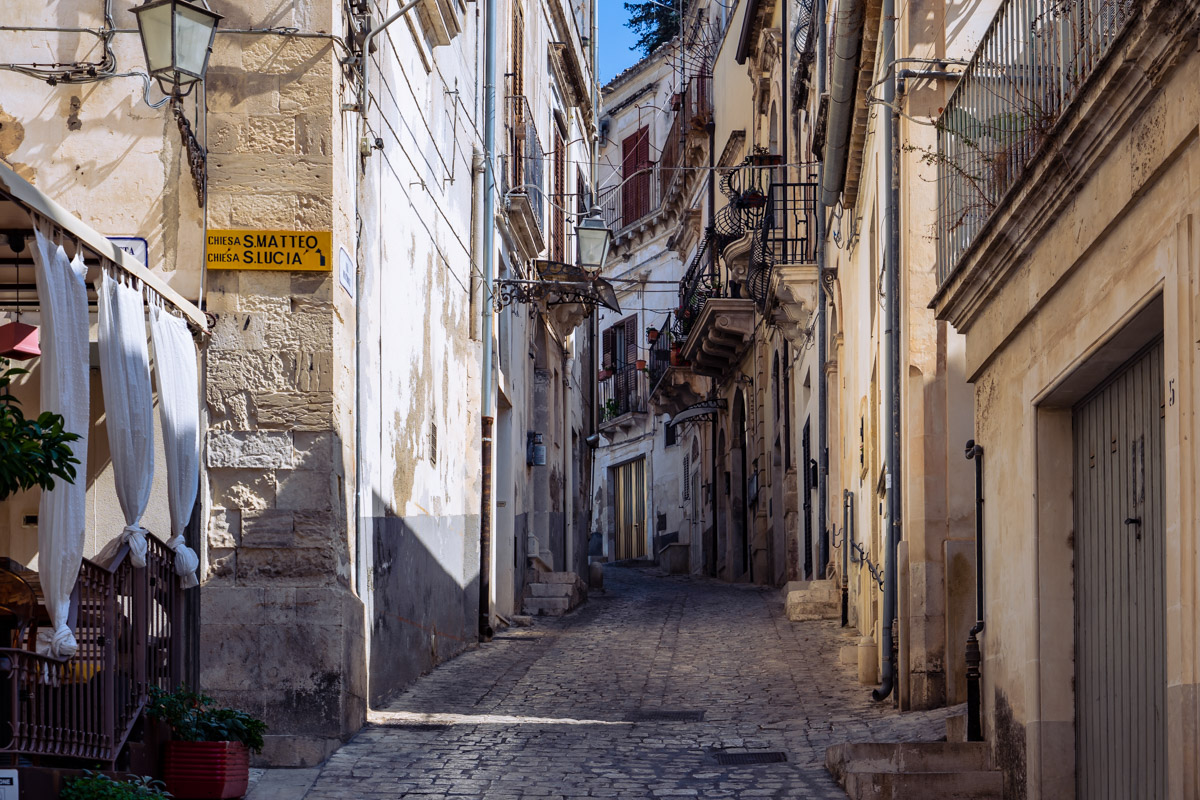 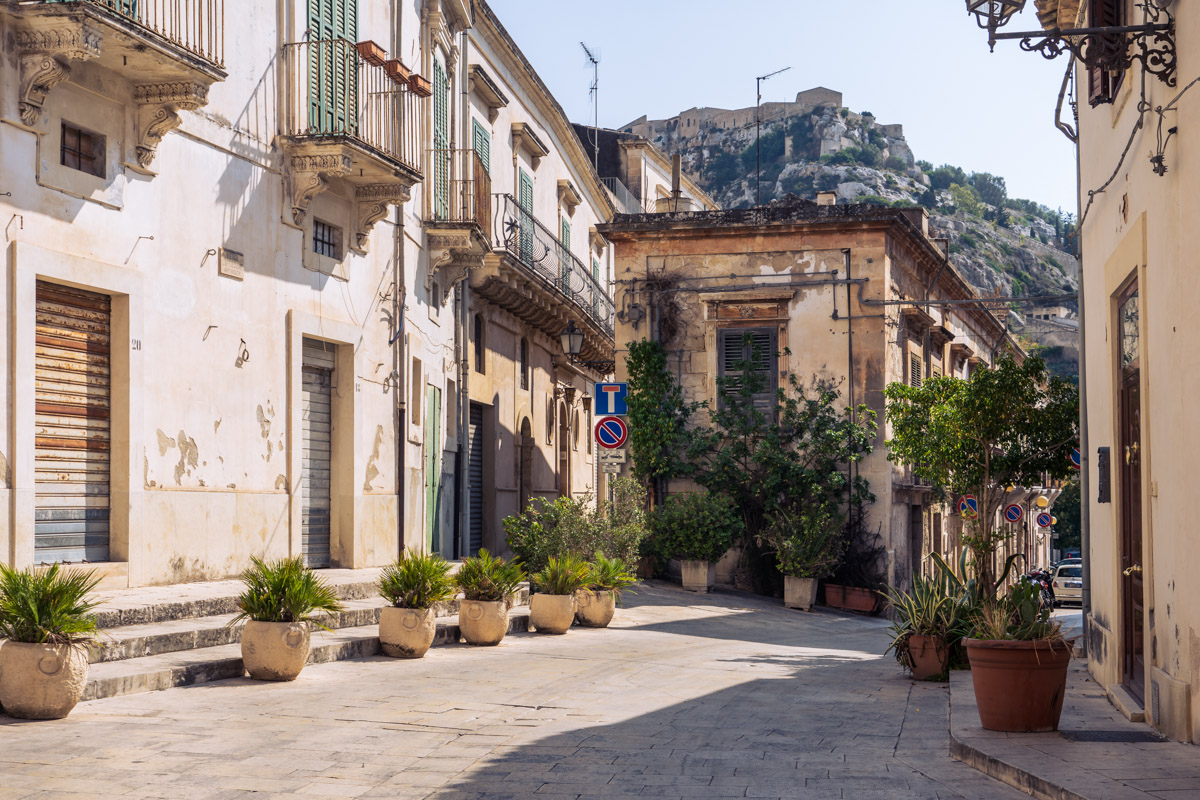 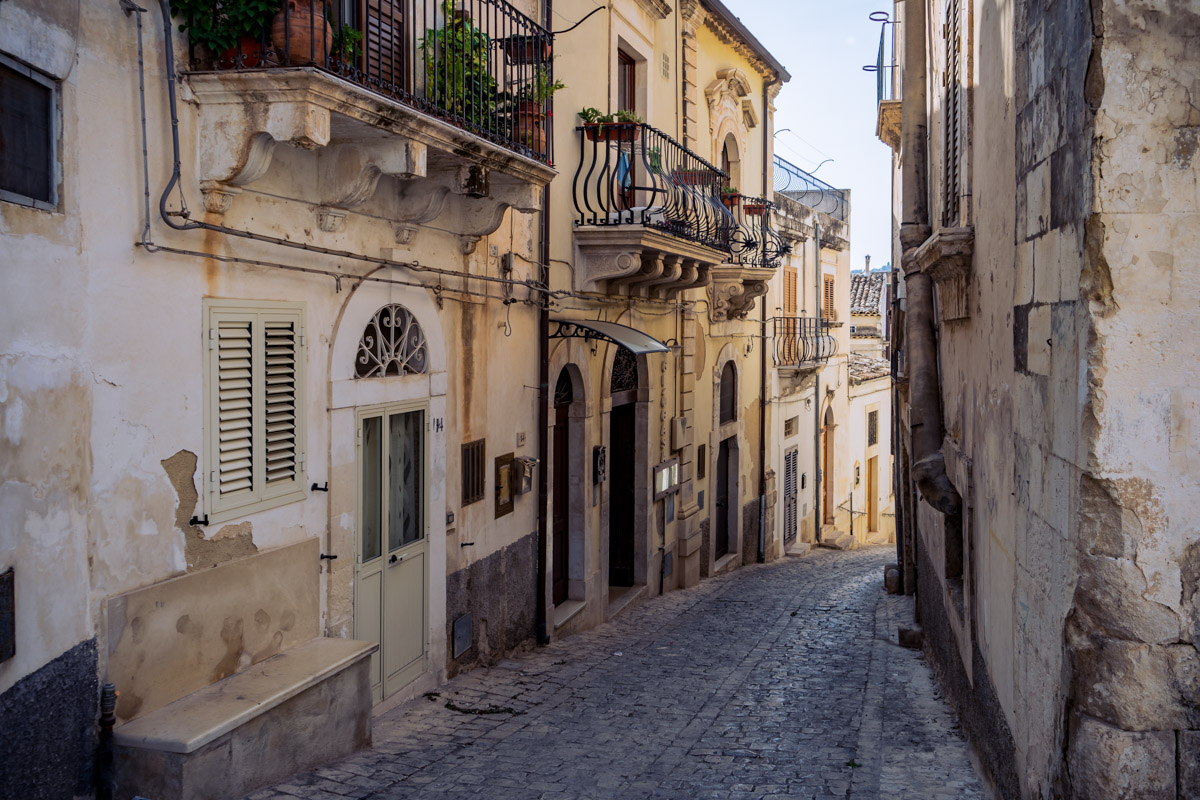 The view towards the 13th-century fortifications above town. 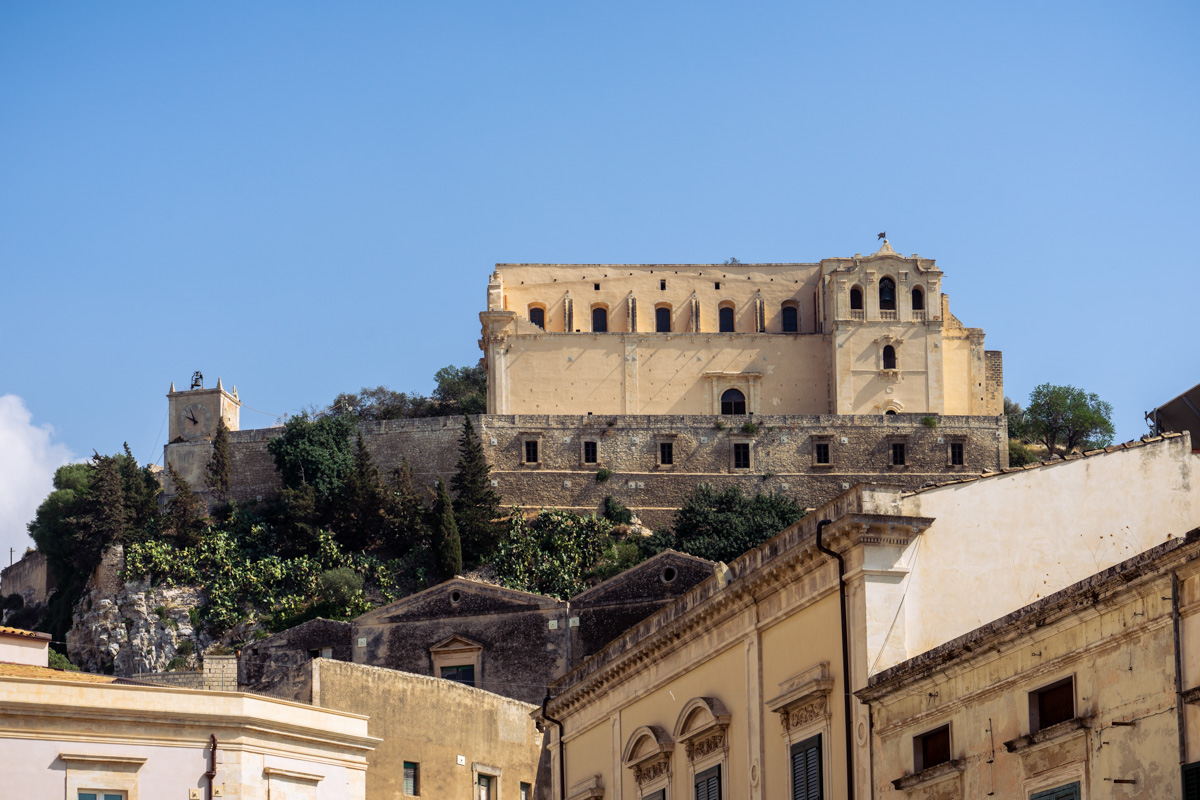 The opposite perspective would be a panoramic view of the town, except we did not budget any time to climb or drive up.

And the opposite perspective of this last shot below would be yours truly, if that was a real person on the balcony of an art studio. 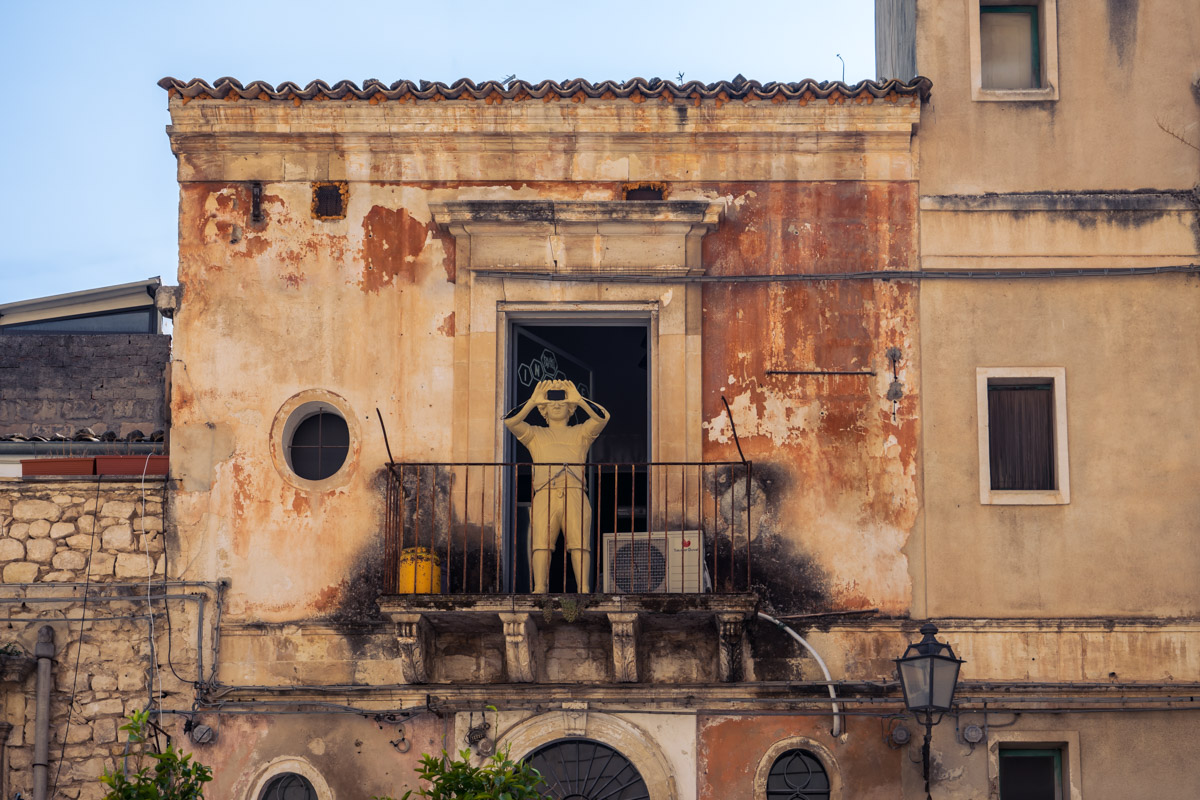 We spent about two and a half hours in Scicli, including a sit-down lunch. That seems about right to get a good feel of the place.