This favorite photograph is actually a shot that went rather wrong when it was taken. 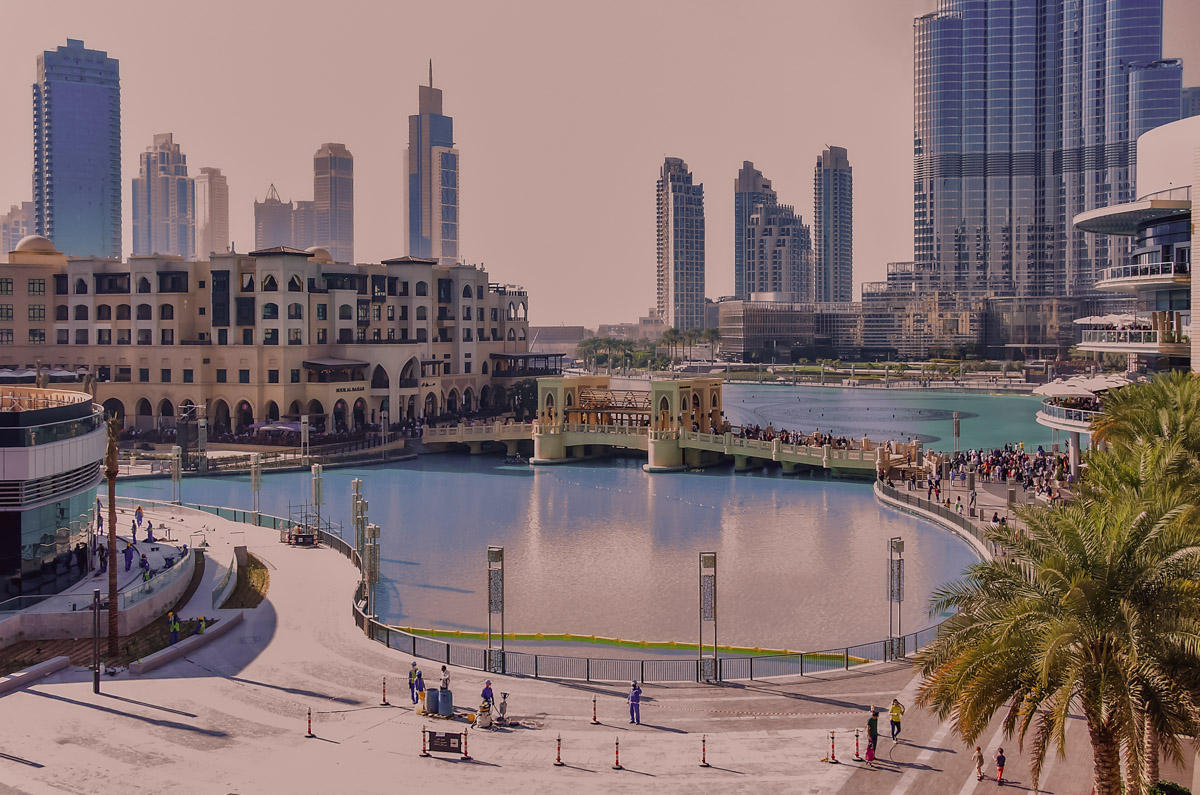 It is a picture of the lake adjoining the Dubai Mall, with Souk Al Bahar prominently shown on the left. The lower levels of Burj Khalifa skyscraper occupy part of the background on the right.

I was traveling on business from Bengaluru, India, to Kyiv, Ukraine, with a connection in Dubai. Five hours between the flights gave me a roughly 3-hour window to go see the city.

It was early February. The temperature in Bengaluru in the morning of that day was about 75°F, while midday in Dubai was showing around 85°F. In Kyiv, however, it would be significantly colder by the time I’d land in the evening. With that in mind, I carried my winter coat with me on the plane, rather than packing it away in the suitcase. And, therefore, carried it with me off the plane in Dubai.

It was not much of a problem while I toured – if that can be called that – the city in a taxi. But I also wanted to stroll a bit in at least one point of interest, so I eventually alighted at the Dubai Mall. It is one thing walking around on a pretty warm day with a heavy backpack; it is quite another also having a heavy overcoat slung over your elbow in such instance. I must have cut a pretty unusual and curious figure.

I also must have accidentally turned the exposure compensation dial on my camera to a pretty significant positive number at some point. With my movements and comportment significantly constrained by the coat, I skipped on re-checking the shots while standing in the bright sunlight, and did not notice that a sequence of them got terribly overexposed until much later. Shooting in RAW allowed me to save one or two – even the worst blown highlights ended up as artistically hazy elements after some Lightroom magic – but every time I look at this picture I am reminded that even the best equipment and software do not prevent a reasonably knowledgeable photographer from making big blunders.

And, of course, I am reminded of that damn coat!

Having that coat with me ultimately turned out to be grandly useful. It is amazing how the depth of winter and a veritable summer can be separated by just a few hours of air travel. We landed in Kyiv in the late evening. It was about 20°F, the plane did not taxi to a gate but was instead parked in the field, with buses transferring passengers to the terminal in the 20th-century fashion. I had my coat on. A colleague who had his winter clothes in his suitcase and was wearing just a shirt then had to spend most of the following week in bed fighting a cold.