After the somber mood of the previous installment in this series, my randomized selection popped up a picture highlighted by the azure celestial hues. A bit ironic, since this photo was taken on the British Isles, which, you know, are not habitually associated with such brilliance in the skies. 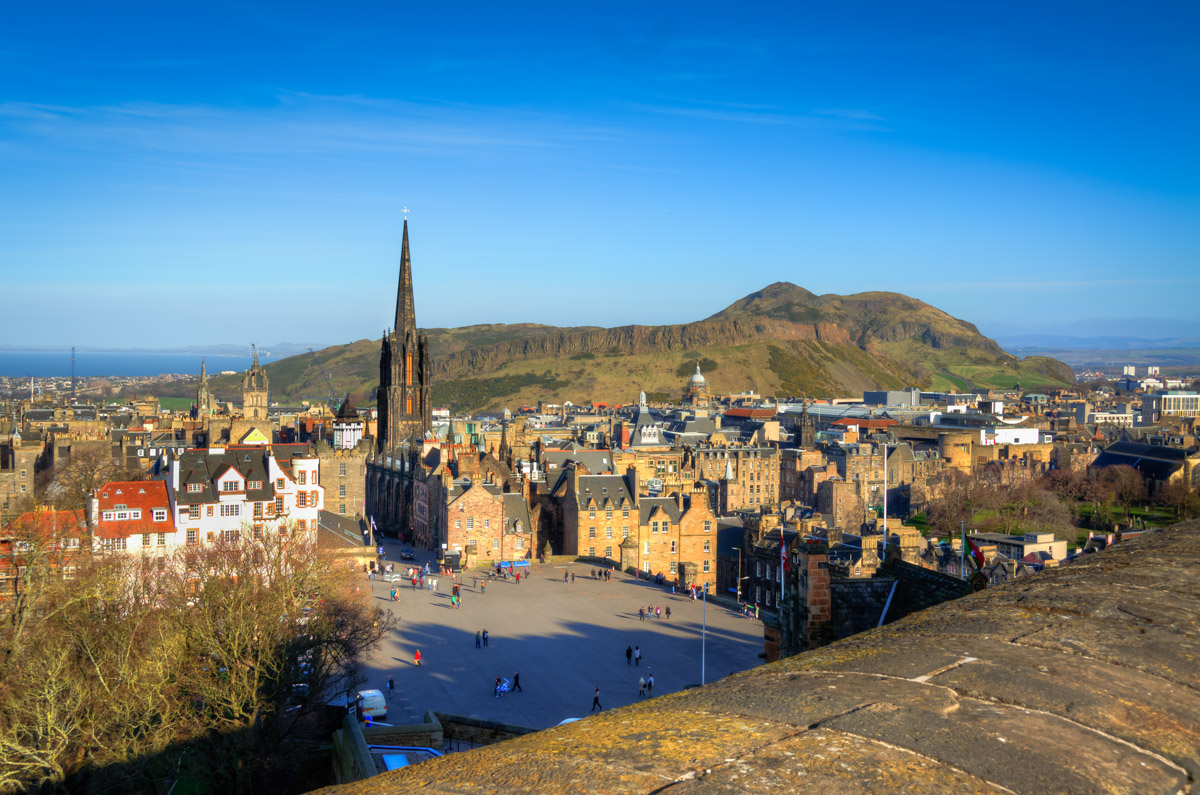 This is Edinburgh – the skyline view from the ramparts of the castle over the Esplanade in front of it and towards Arthur’s Seat in the background. The distinctive spire of the Hub, a 19th-century almost-church that has been reborn as an entertainment venue a couple of decades ago, is proudly displaying its credentials as the highest point in central Edinburgh.

The picture was taken later on the same afternoon as this one, during my very first visit to town after several days of touring scotch distilleries. I entered the Edinburgh Castle barely an hour before its closing time, despite the good-natured attempts of a nice gentleman at the ticket desk to save me from paying a full entry fee for something that warranted at least three hours of exploration in his opinion. I was flying back home early the next morning so it was now or who-knows-when, and I insisted on going in.

The ticket agent was kind enough to suggest what to focus on in the first place, but truth be told, I have a very dim recollection of what I saw in the castle and not a significant amount of photographic evidence to aid my memory. I must have stepped inside every single building of importance, if only for a minute or two in some cases. What I can say for sure is that I lingered at various viewpoints on the walls, since more than half of my Edinburgh Castle archive consists of city views in all directions.

I have been back since, spent more time in town, and yet failed in my attempt to explore the castle again as it was partially closed for refurbishment. Erring on the side of “now” back then surely seems a correct choice in retrospect, especially as the “who-knows-when” option acquired a more profound connotation in the last few weeks. Then again, it is highly likely that scotch, Scotland in general, and Edinburgh in particular will feature on my travel plans fairly soon after we return to normal.

I’ll raise a dram to that!