A few more from Jordan

My Jordan trip was organized by a company called Desert Eco Tours. They handled all logistics, transportation, and accommodations from the moment I approached the border crossing between Eilat and Aqaba until the moment I was crossing in reverse direction. At least a dozen different people facilitated different legs of my journey, and there were also three blocks of time when I was on my own. One of those I mentioned before – my free time in Petra. The other two were the overnight accommodations.

I crossed into Jordan in an early evening and spent the remainder of that day in the town of Aqaba. It mirrors Eilat in that it is the only large town on a small stretch of the Red Sea coast that belongs to its country. As the southern gateway into Jordan, it enjoys a special economic and taxation regime, with thousands of foreign tourists passing through it each night. In the evenings, its “downtown” area has several lively pockets where European-looking people by far outnumber Middle Eastern faces.

I did take an evening stroll around the bustling part of town, but left the camera in the room. My phone, unfortunately, does not produce passable photography under night skies. More as a proof that I stepped out of the hotel than anything else, here is a picture of me with a friendly taxi driver who upon learning that I did not need a ride insisted that I should take a photo with him. 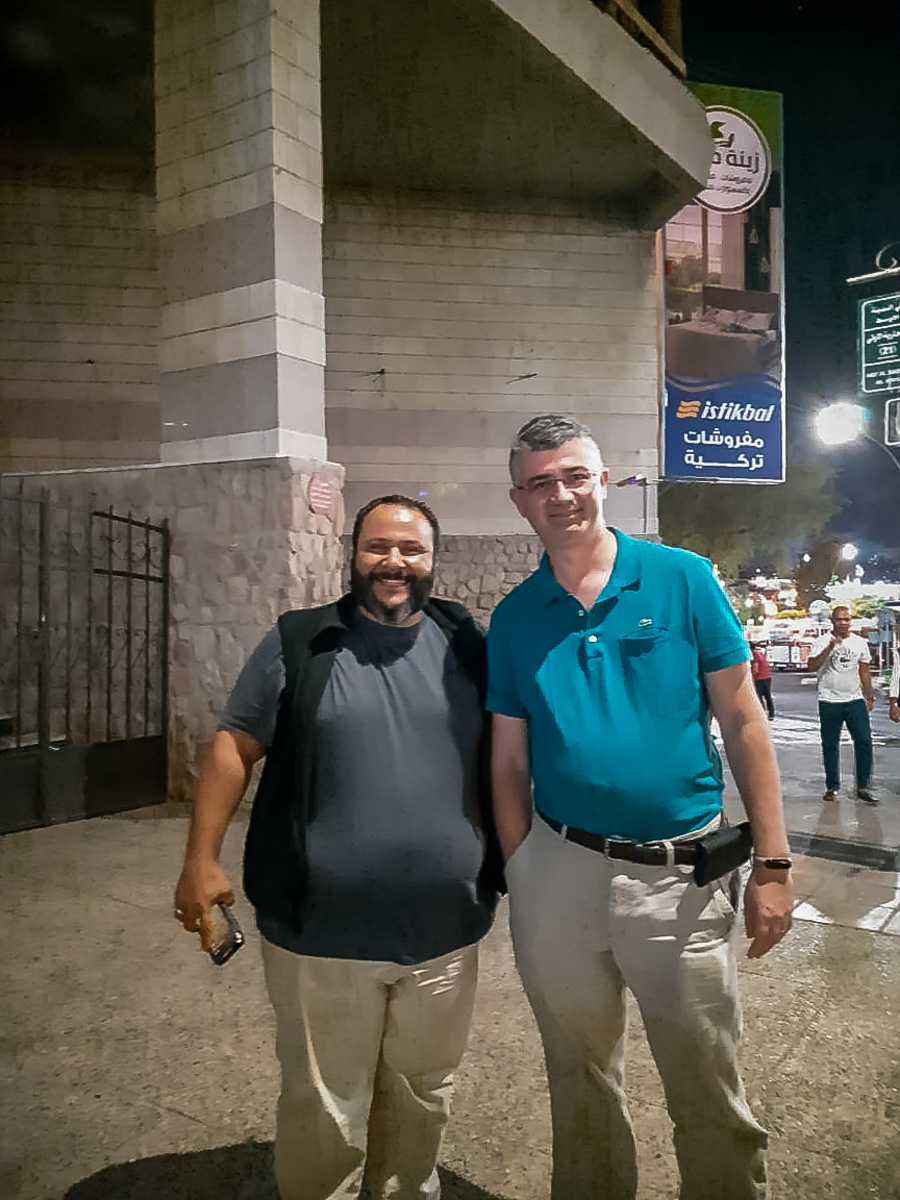 Upon returning to my room later that night, I took this one shot of the view out my window. 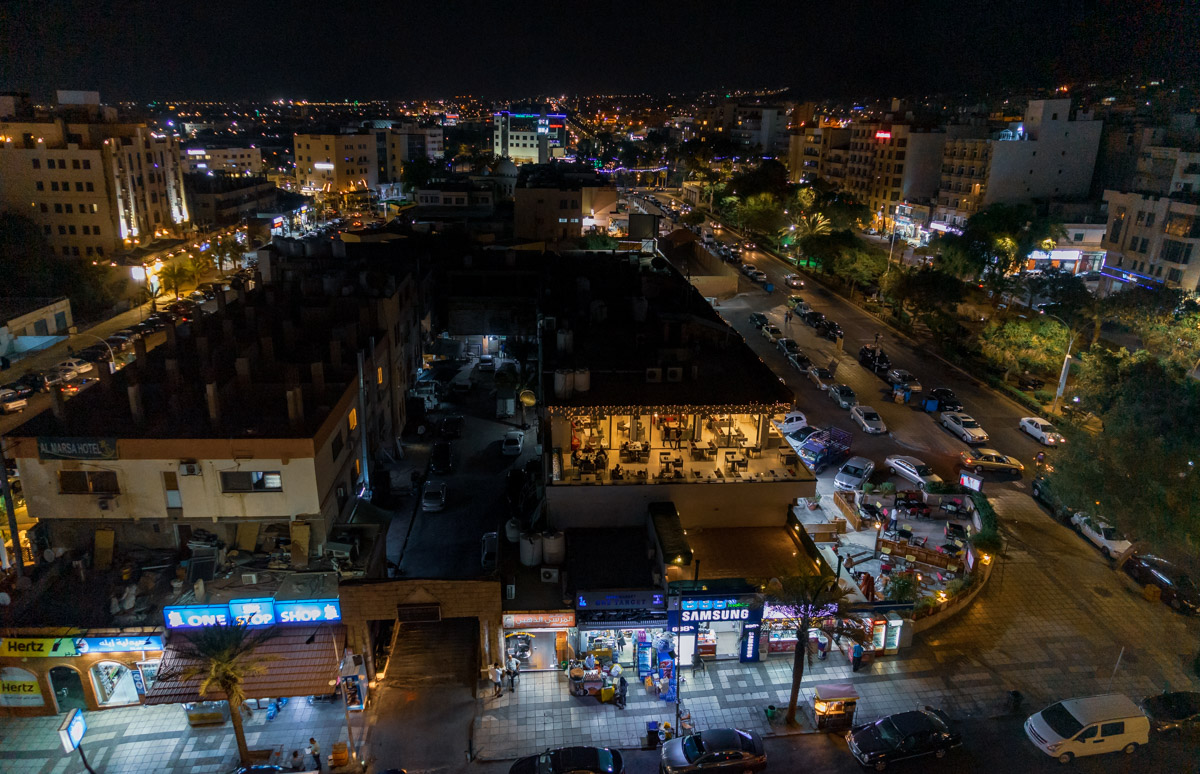 Technically, there is not much to see in Aqaba – it is truly a gateway much more than a point of interest. Here are a few morning views over town taken from the rooftop terrace of the hotel. 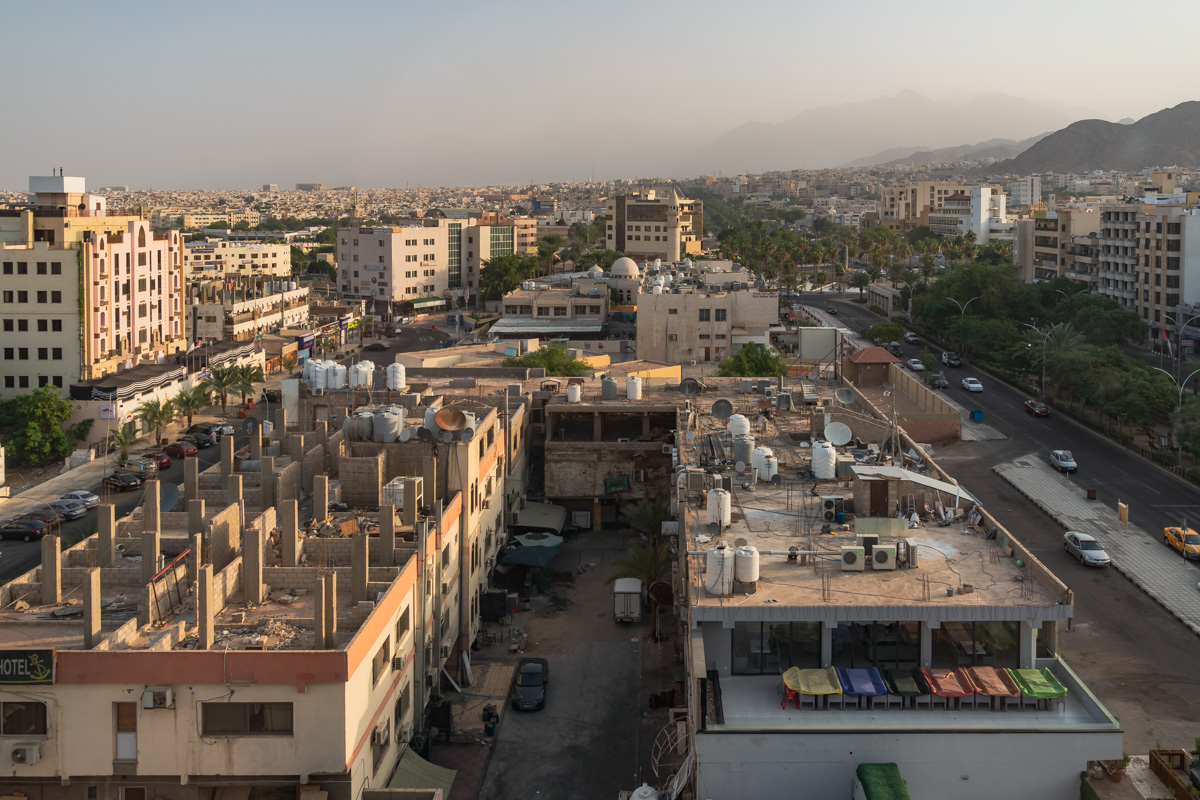 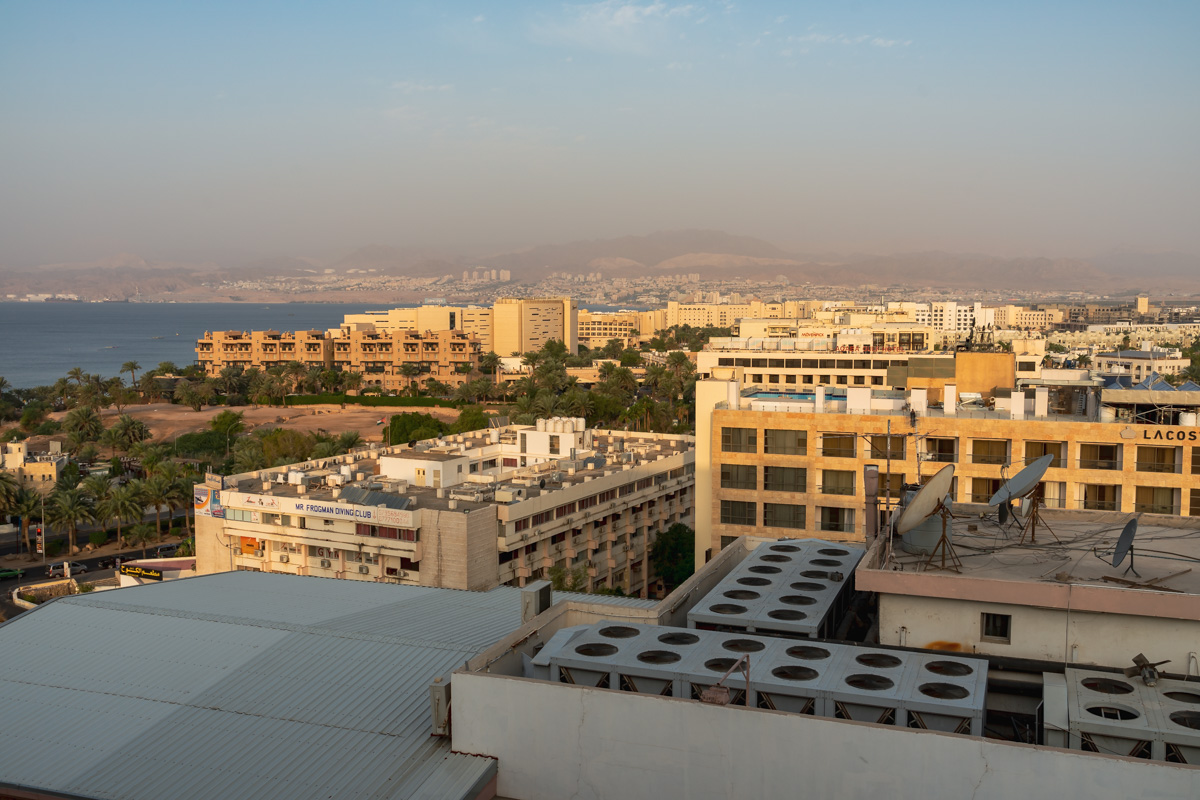 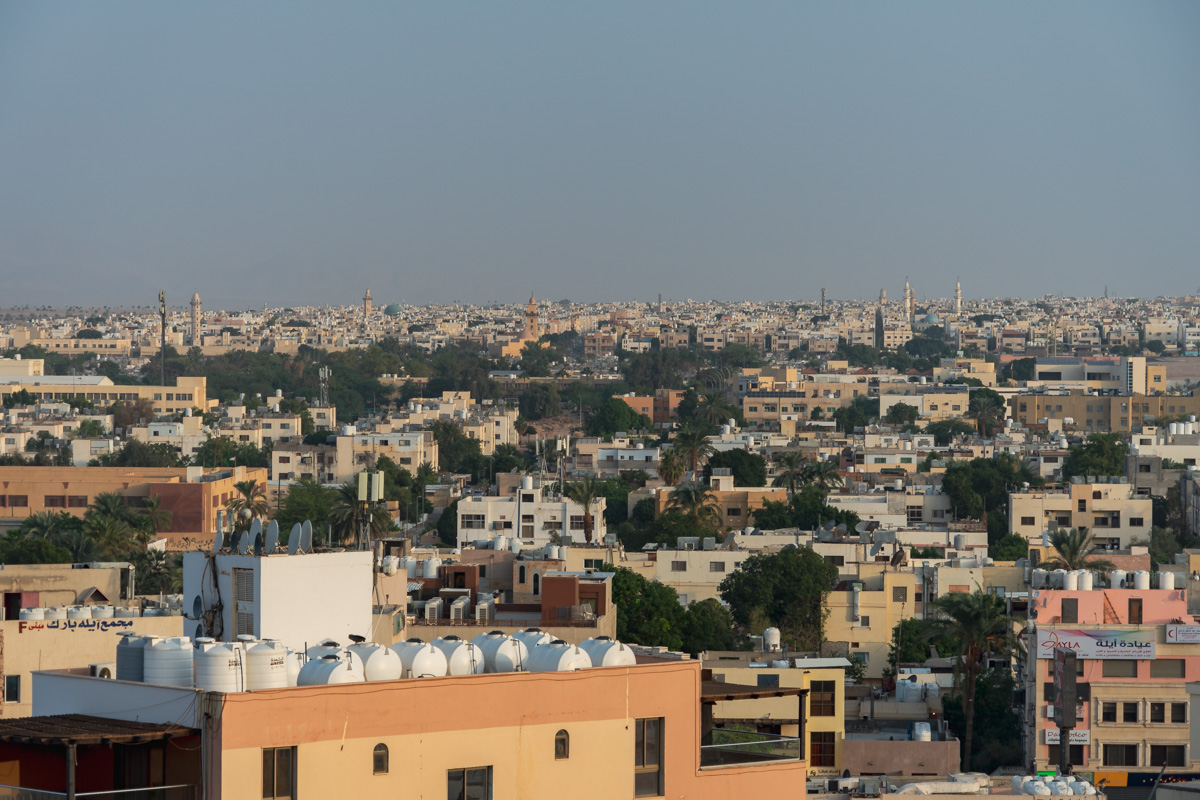 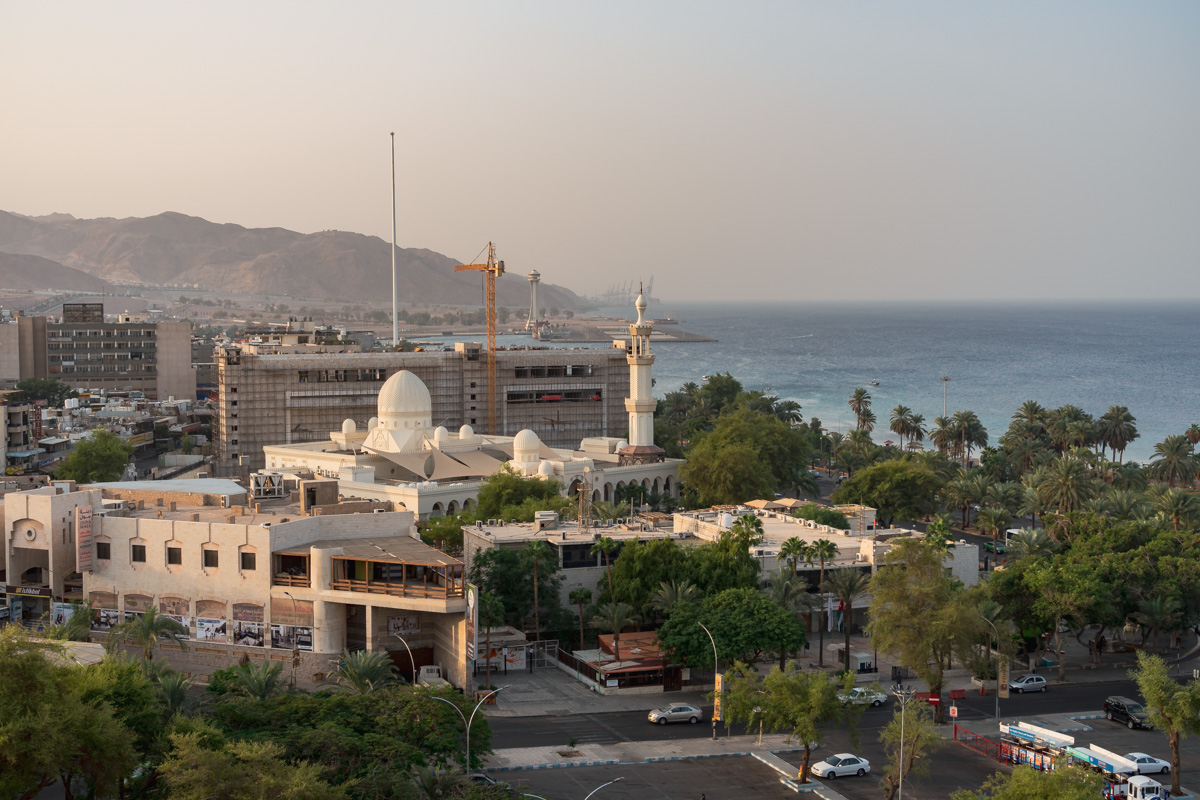 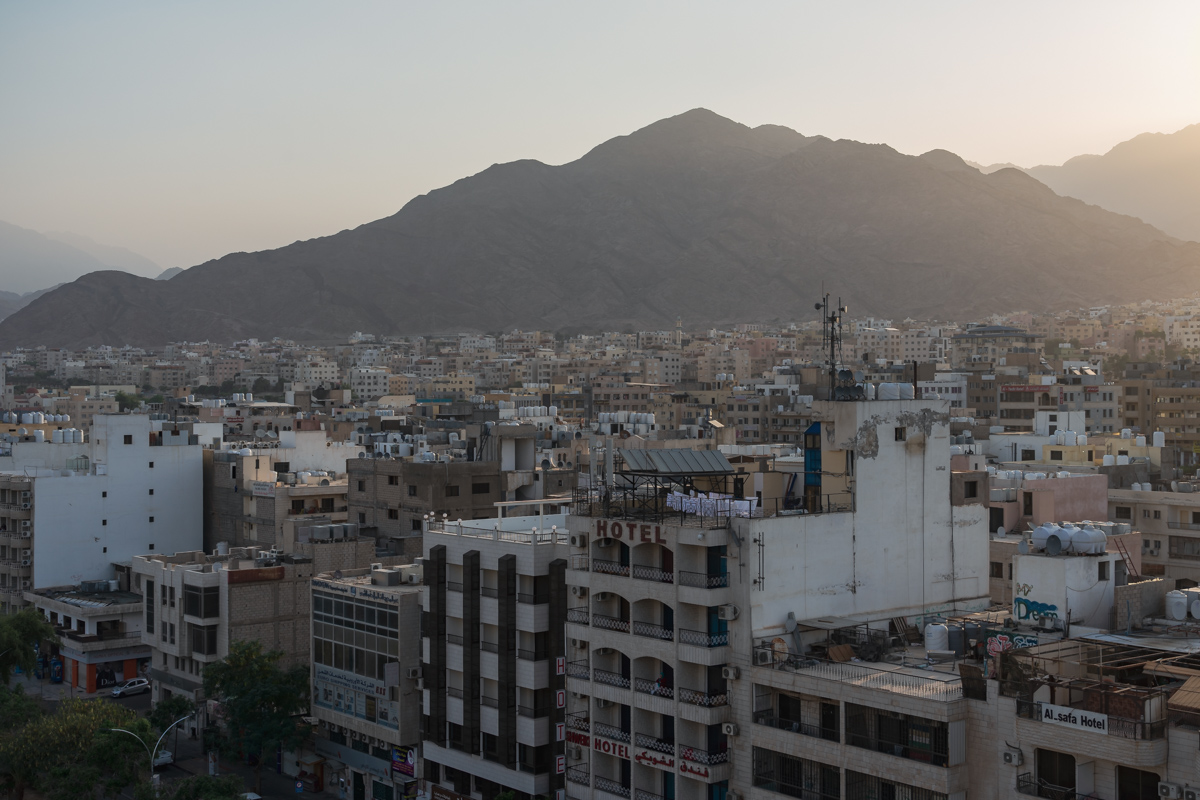 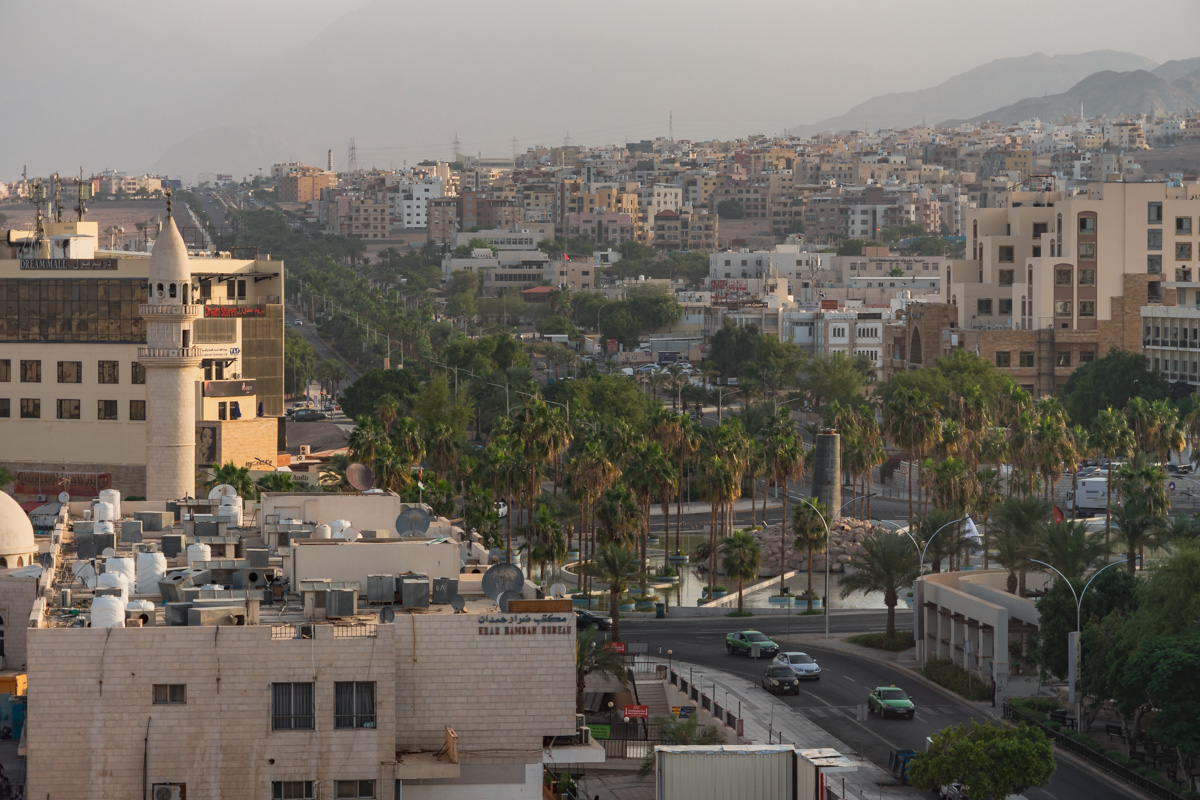 The ride from Aqaba to Petra on a tour bus took close to two hours. I snapped a few pictures along the Desert Highway through the bus windows. 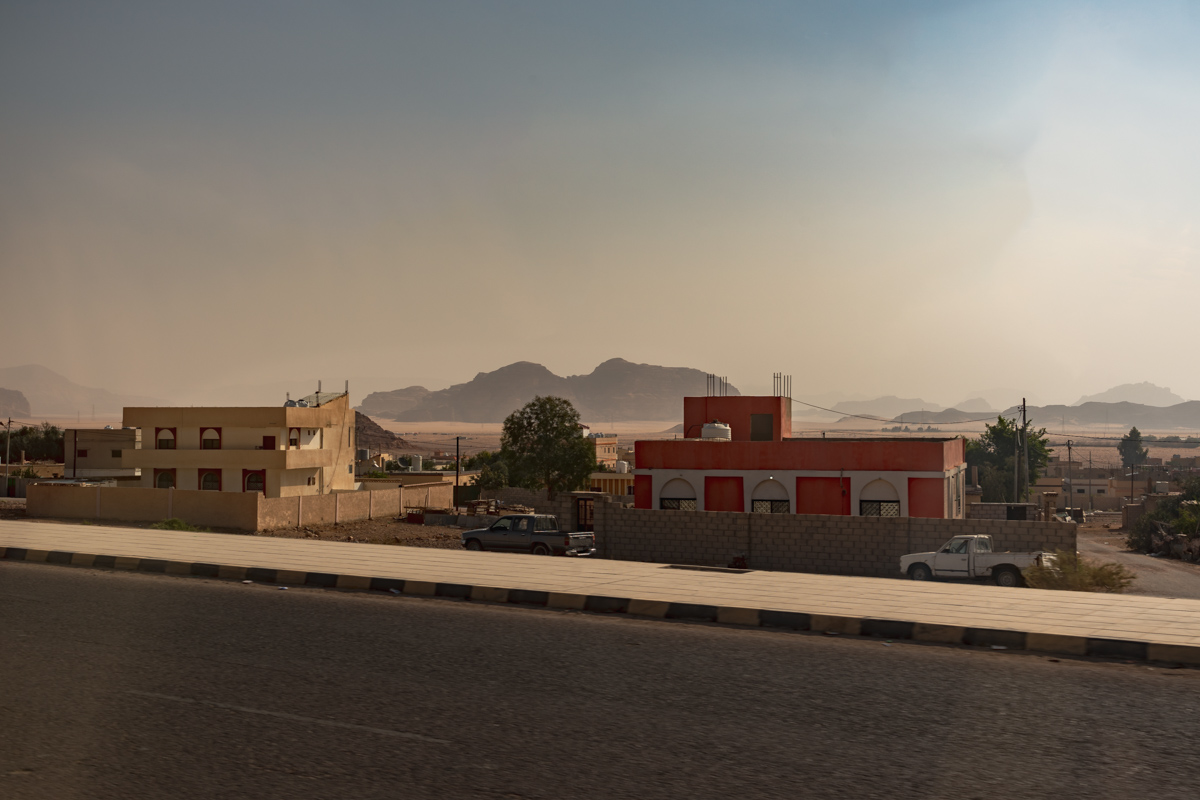 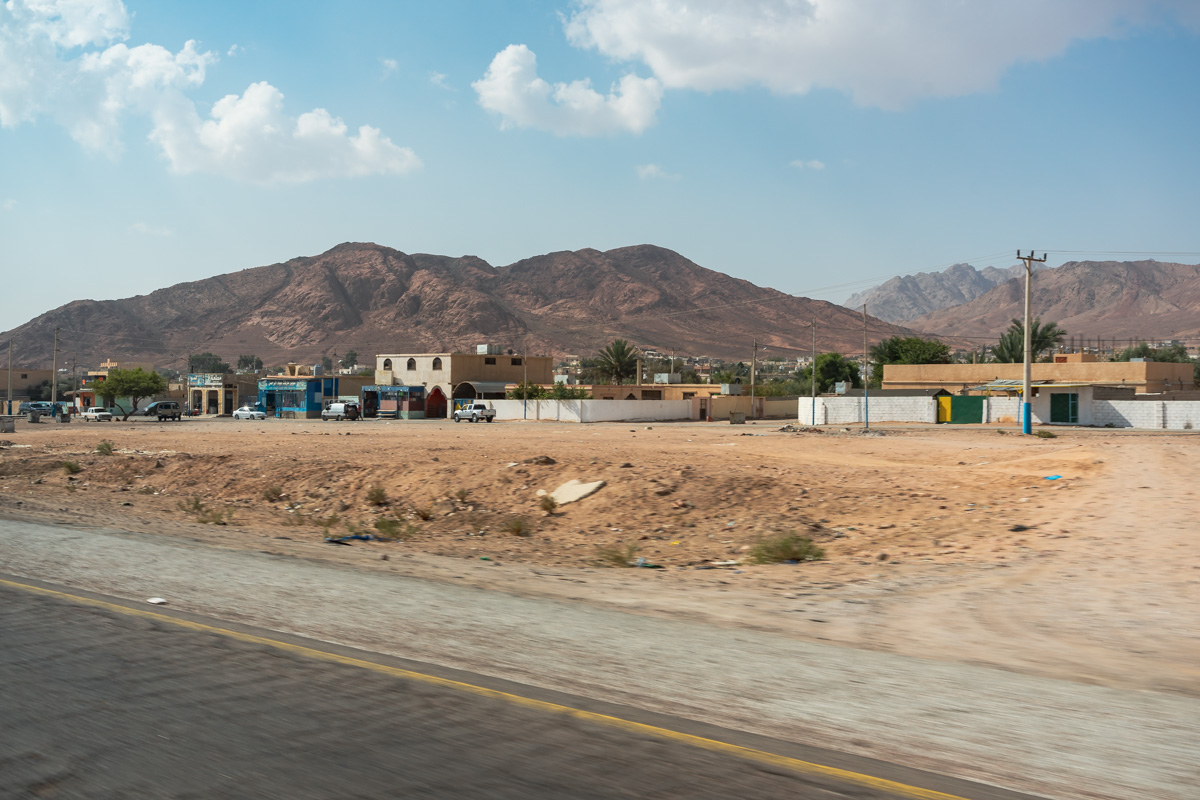 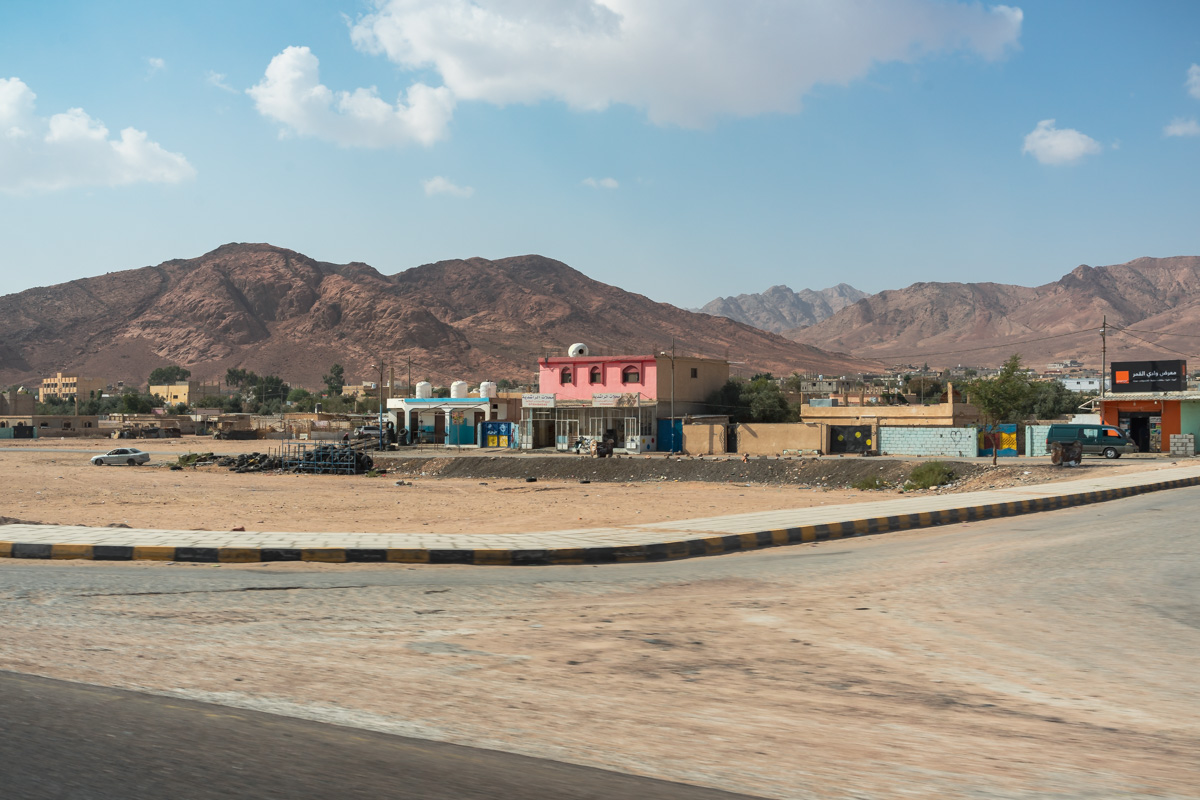 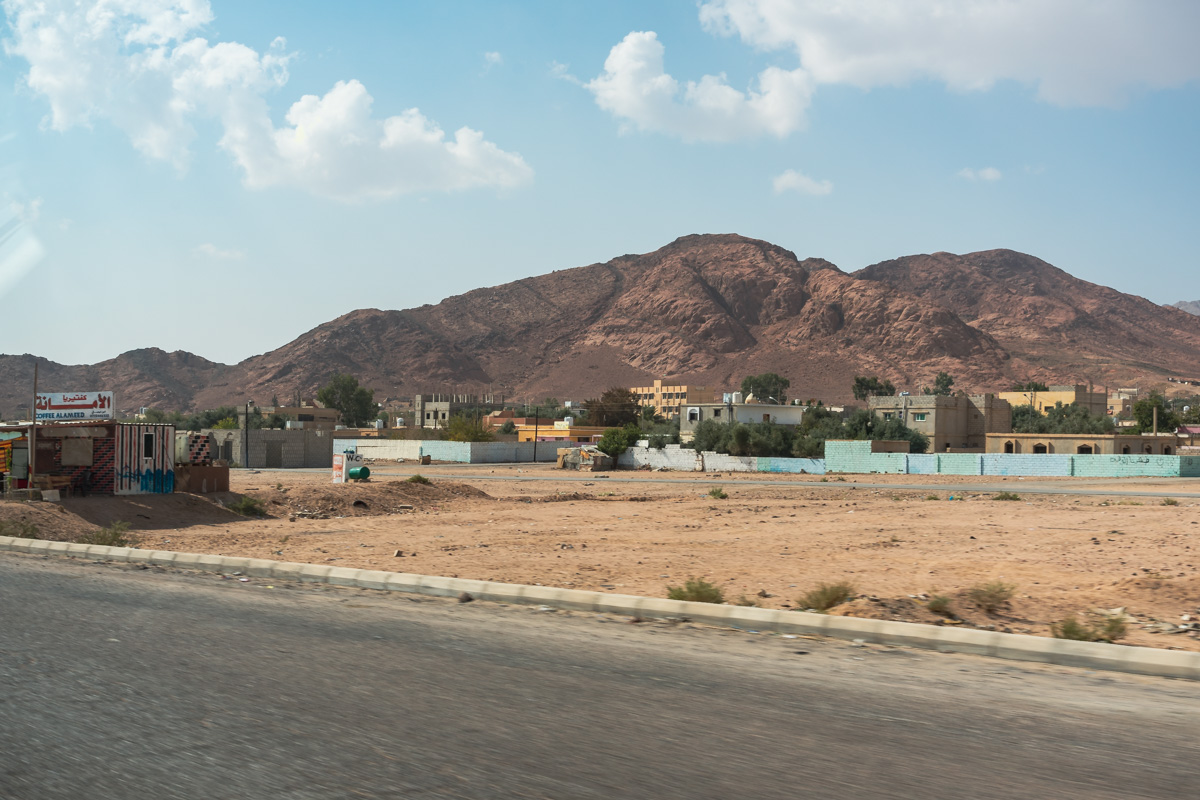 Camels, as you would expect, offer the key exotic highlight in these environs. 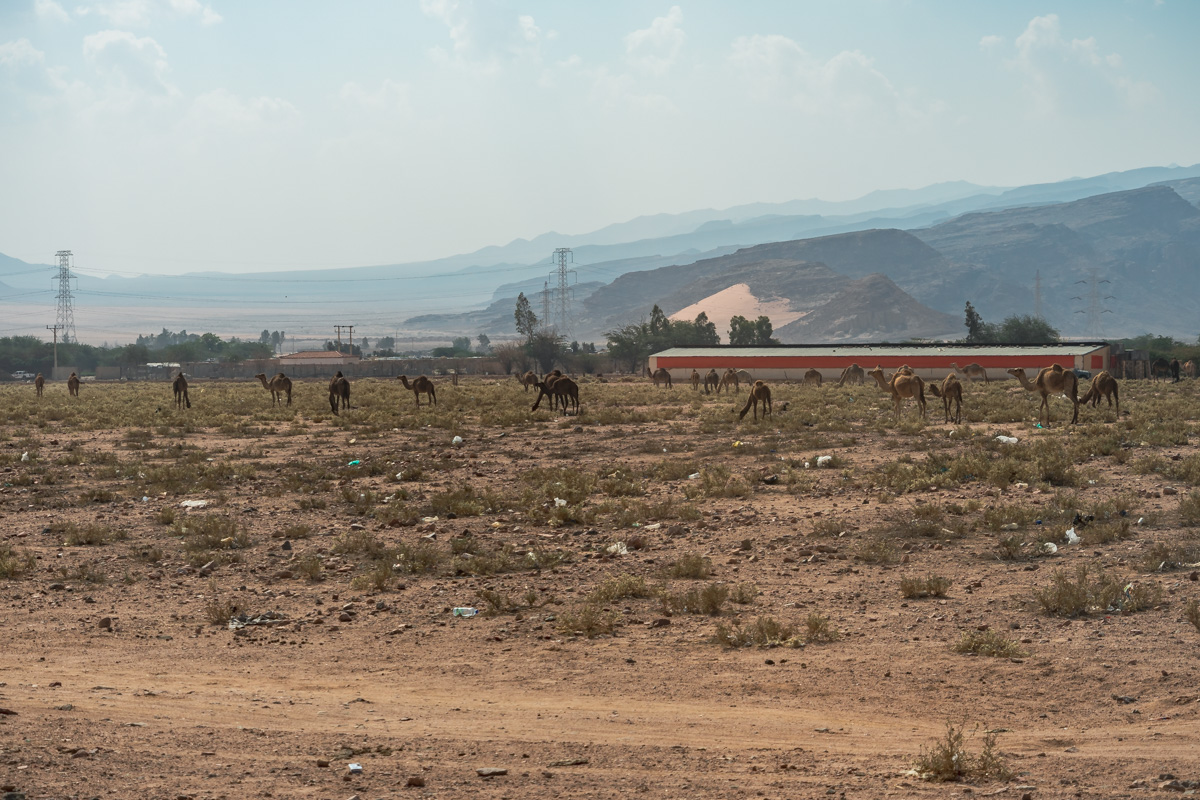 One of my favorite chance shots of the trip – camels led by a car. 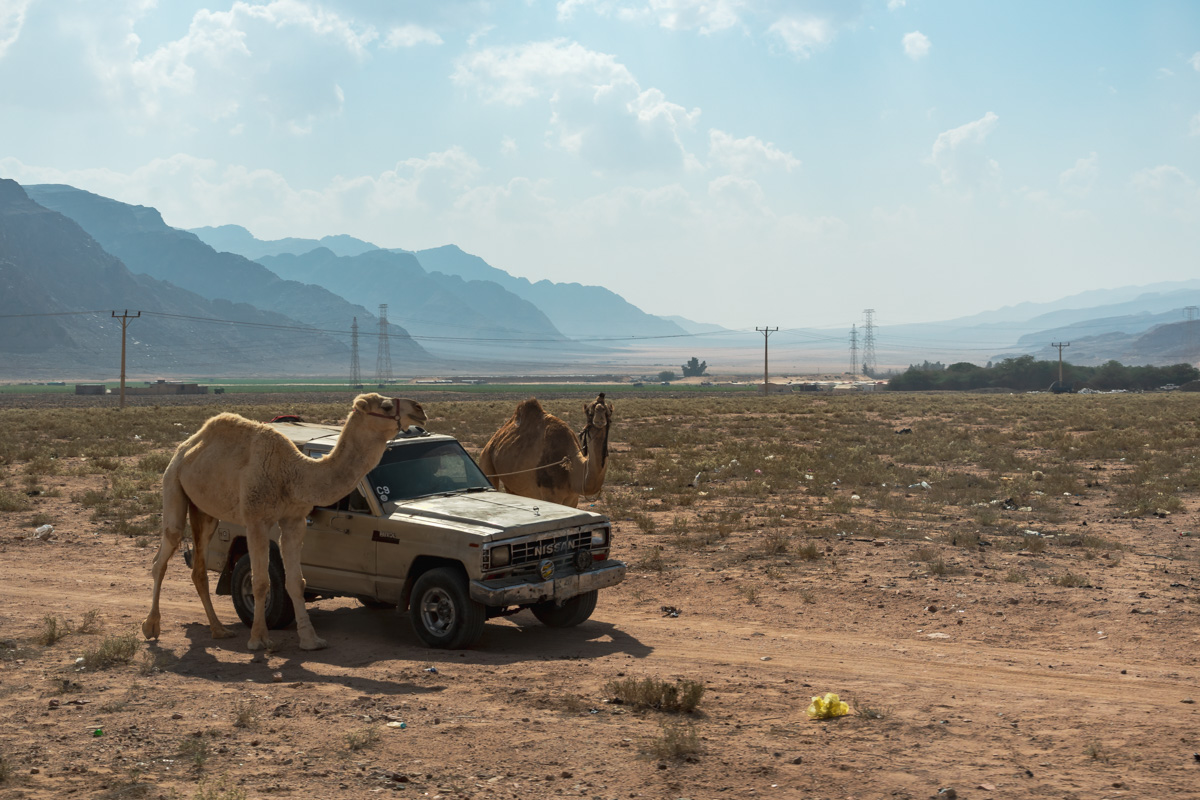 Geological formations are impressive and frequently otherworldly in many places in southern Jordan. 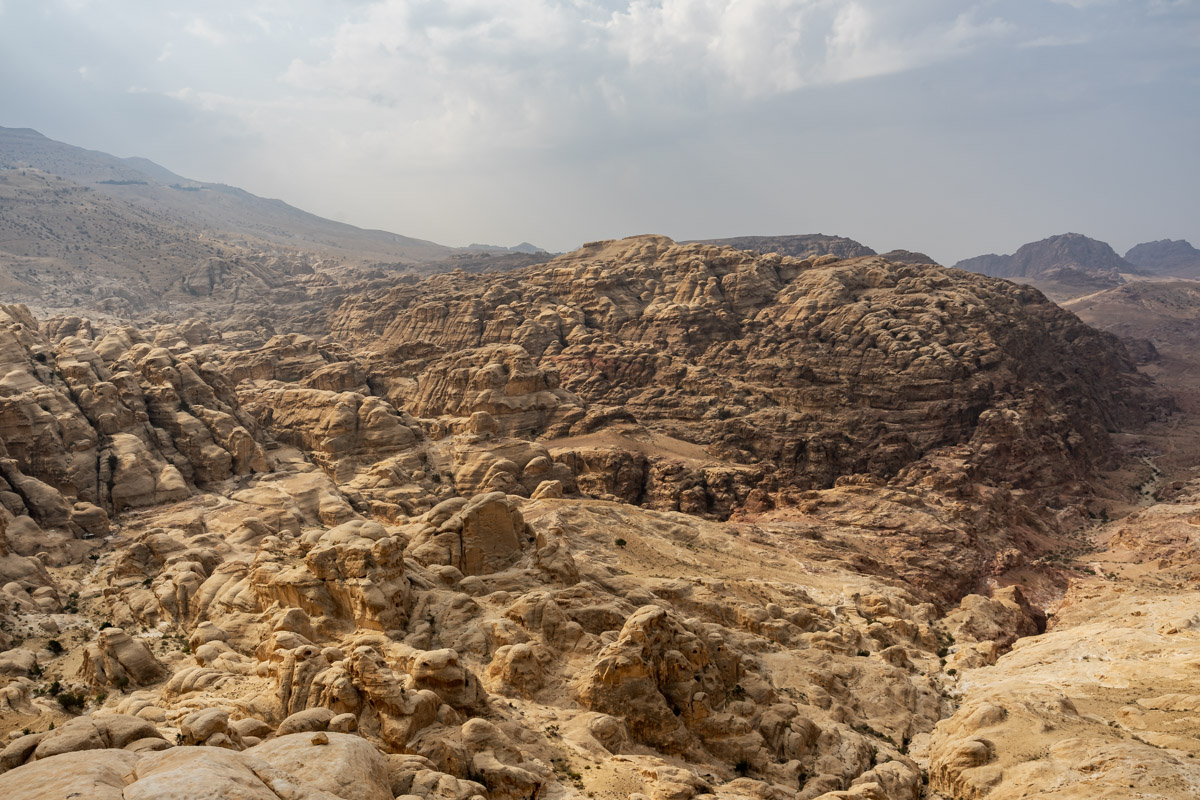 Conversely, architecture in this region is rarely of a kind to catch the eye. Only the minarets occasionally add a bit of a “look-at-that” factor. 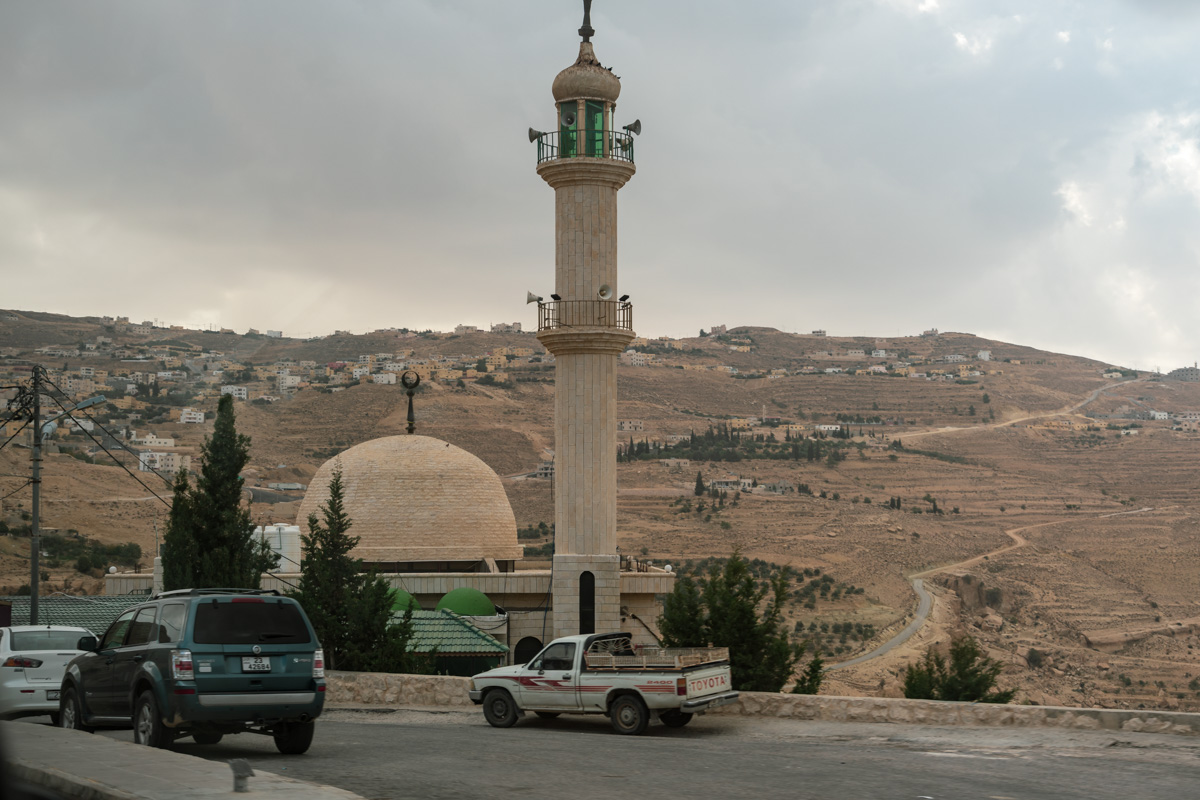 A settlement in the distance occupying the top of a sandstone mountain. 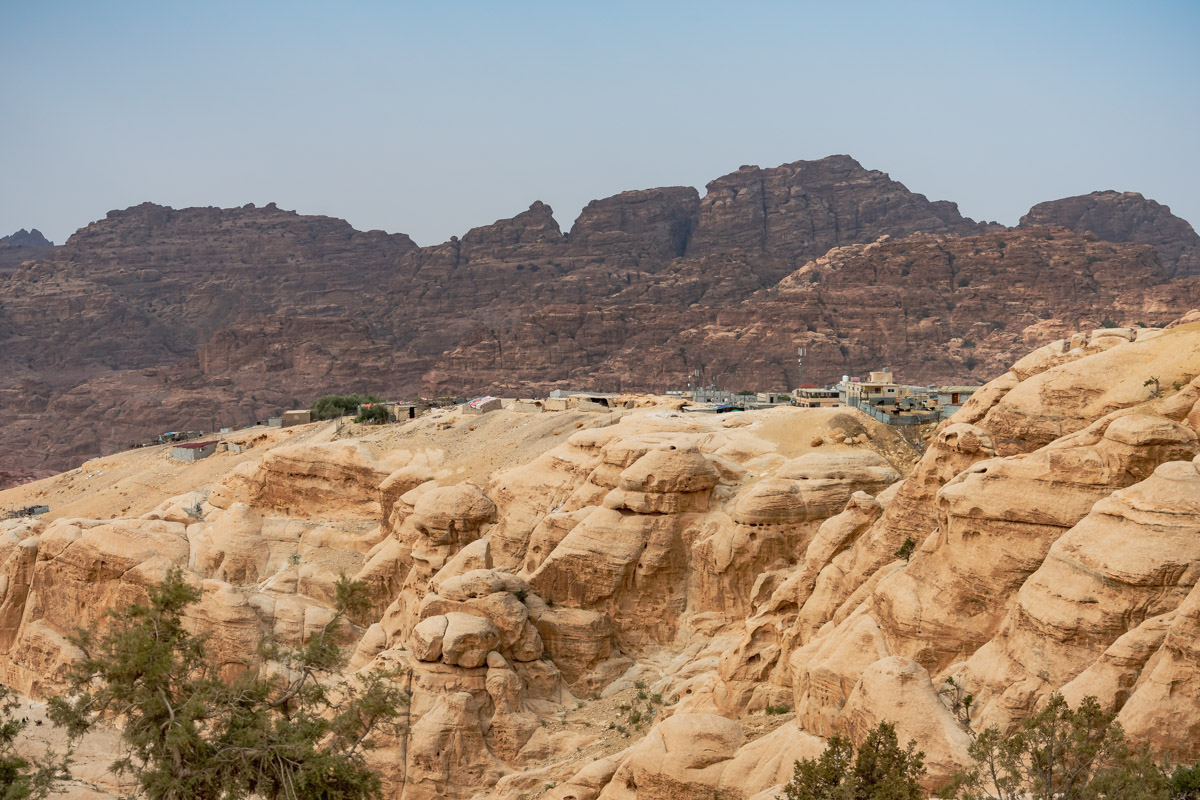 An exurb of the ancient Petra, by all appearances. 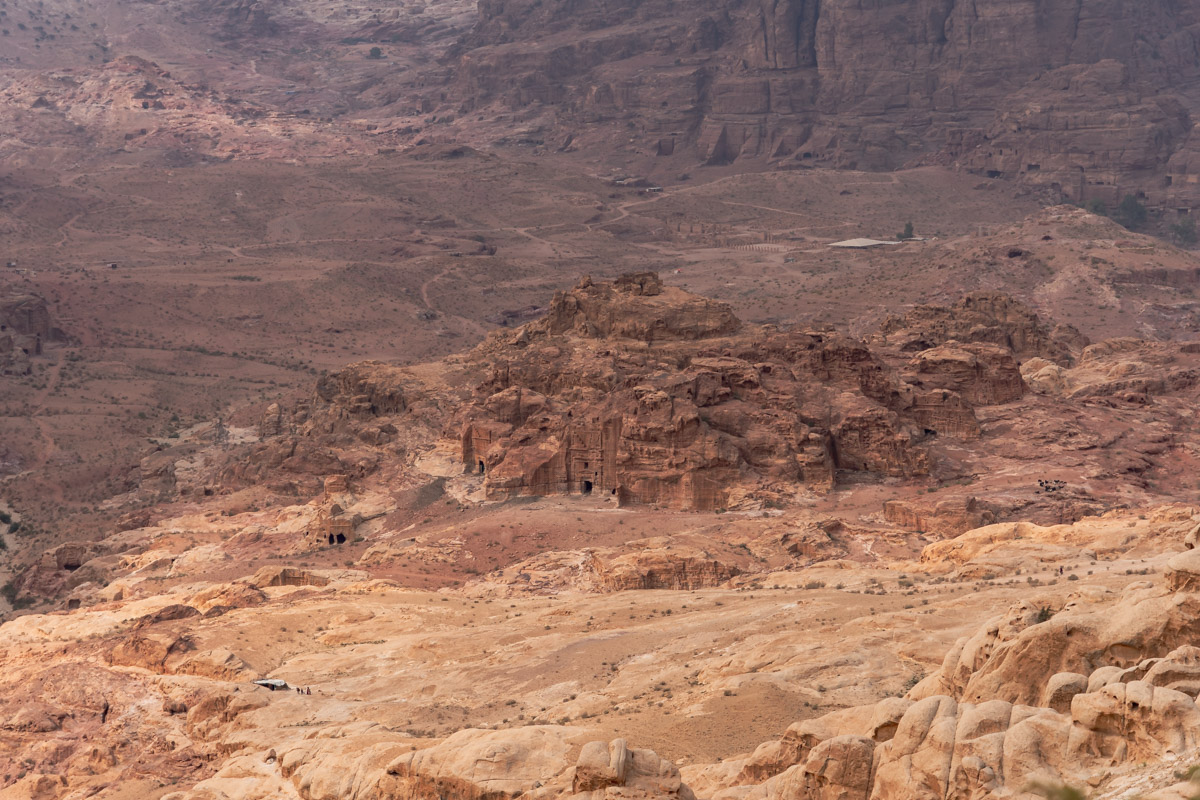 There are old railroad tracks along the Wadi Rum Road that played a role in moving troops and supplies during the Great Arab Revolt of 1916-18. These days, it is a minor tourist attraction. 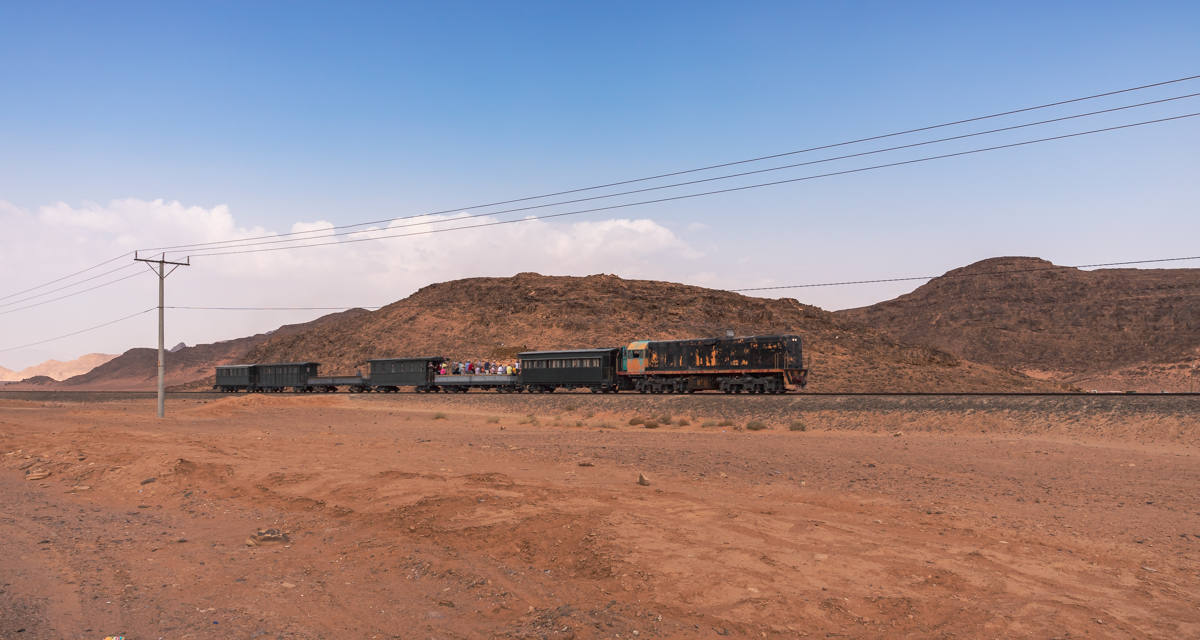 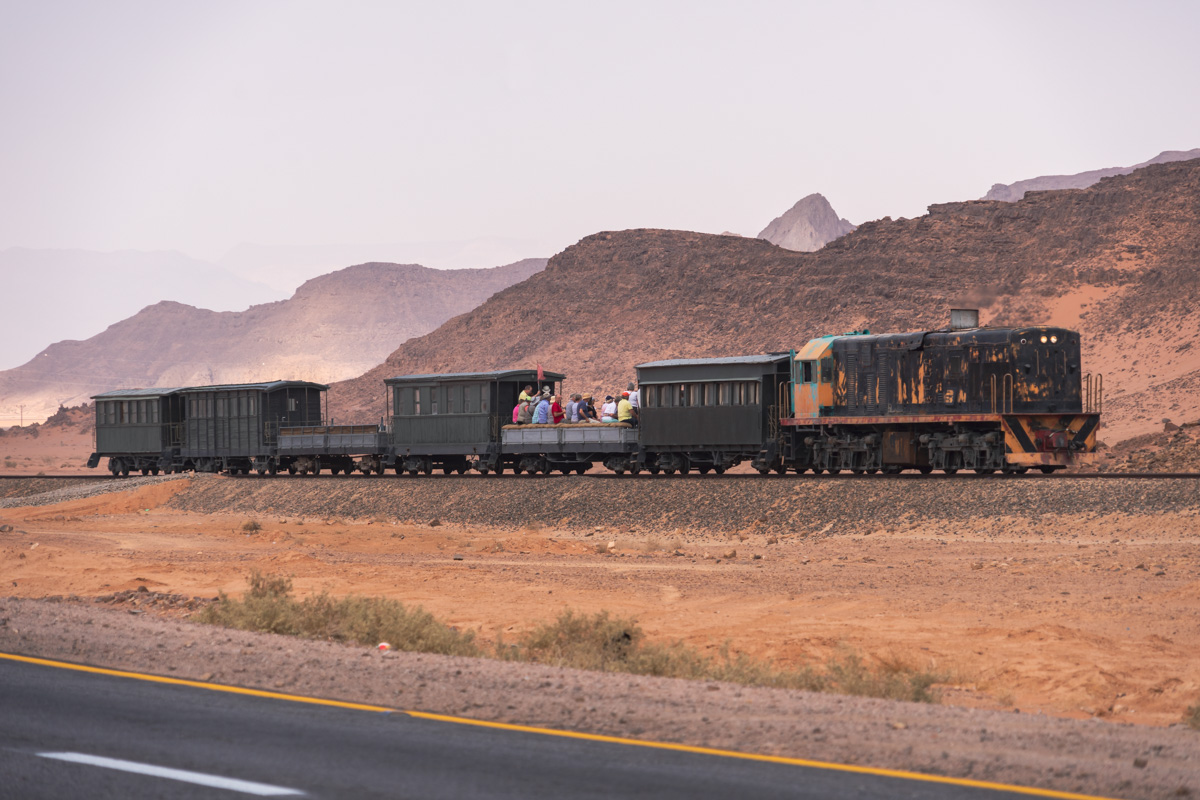 The mile-long train ride is enhanced by people posing as rebels, explosions, gunfire and smoke effects to simulate an attack. 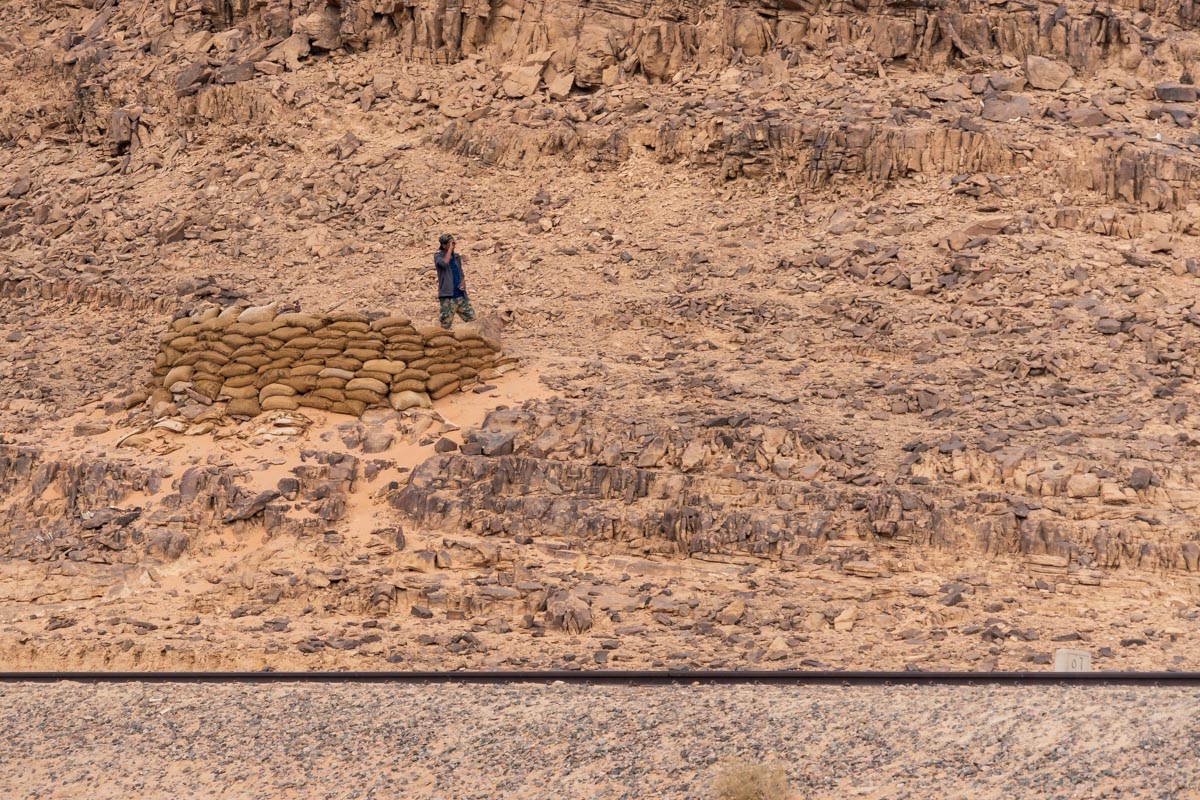 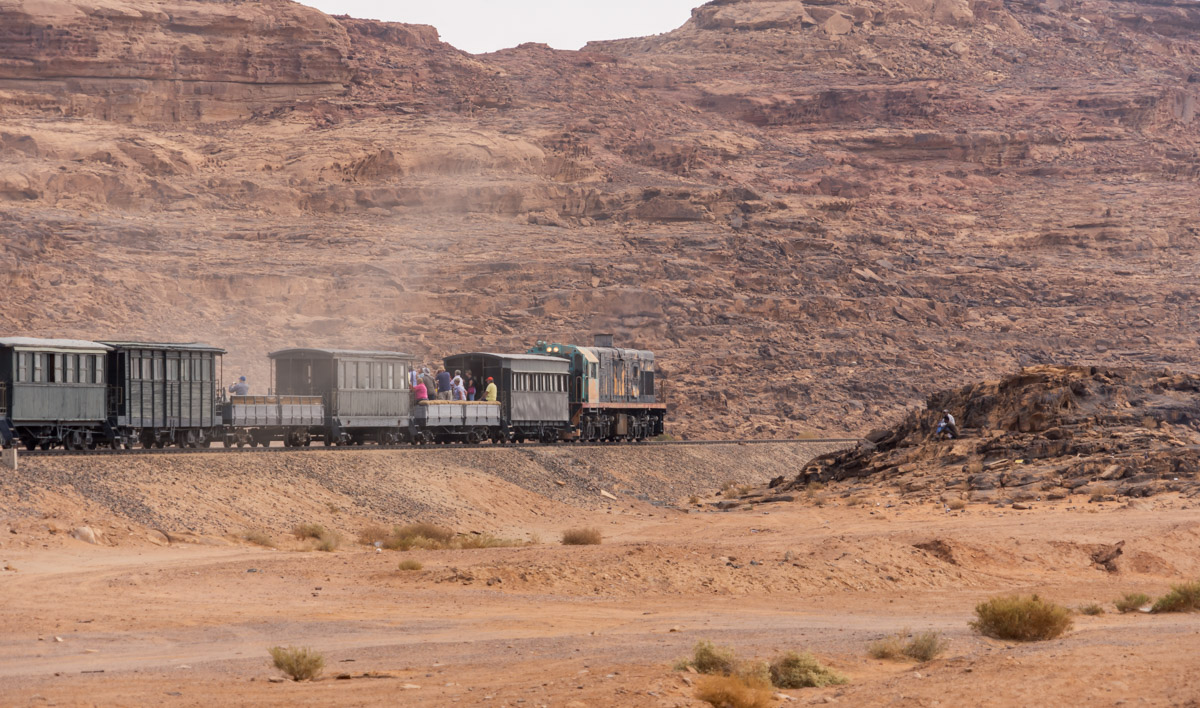 A few nighttime pictures of the Bedouin camp that was my overnight accommodations near Petra. 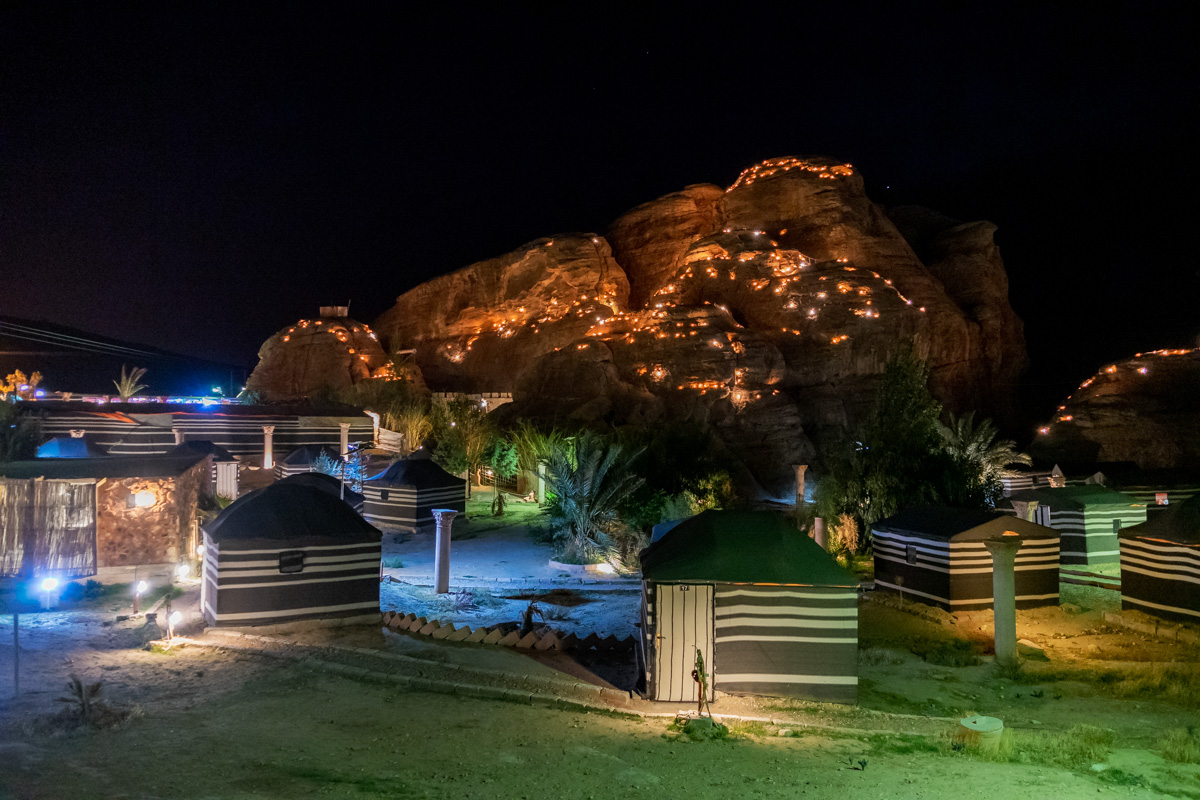 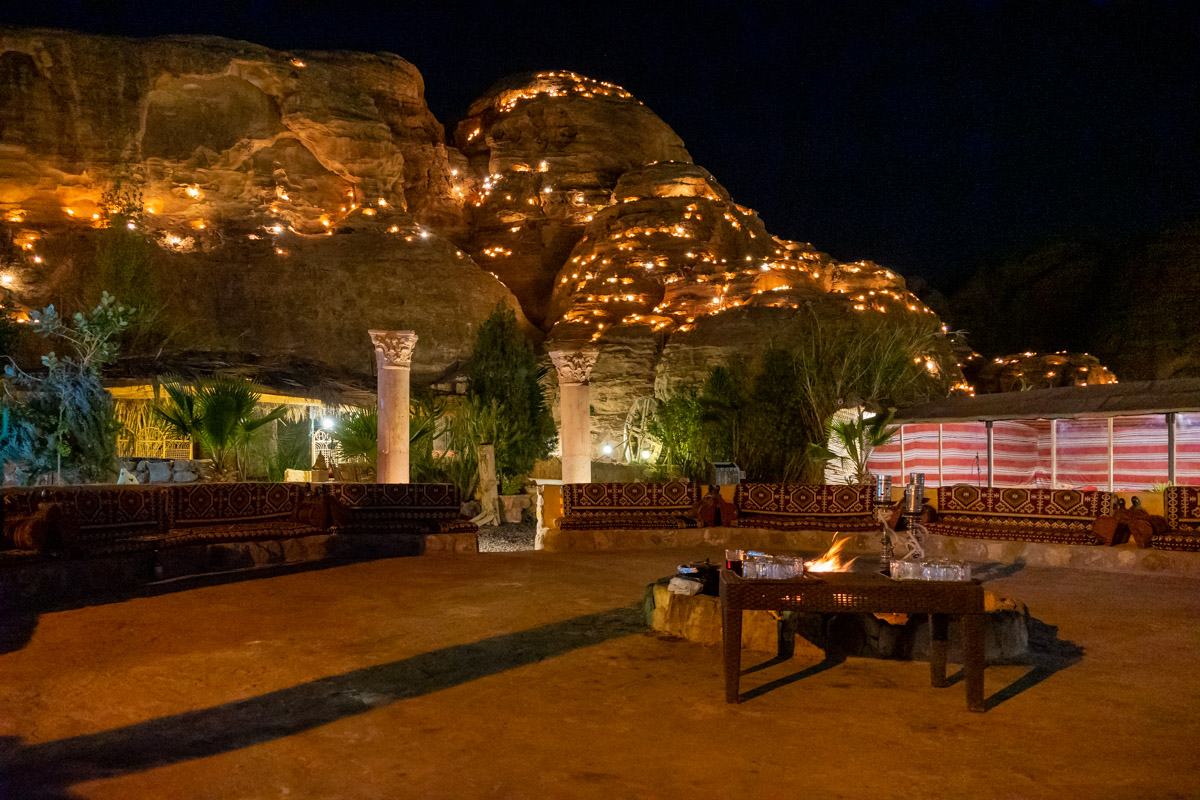 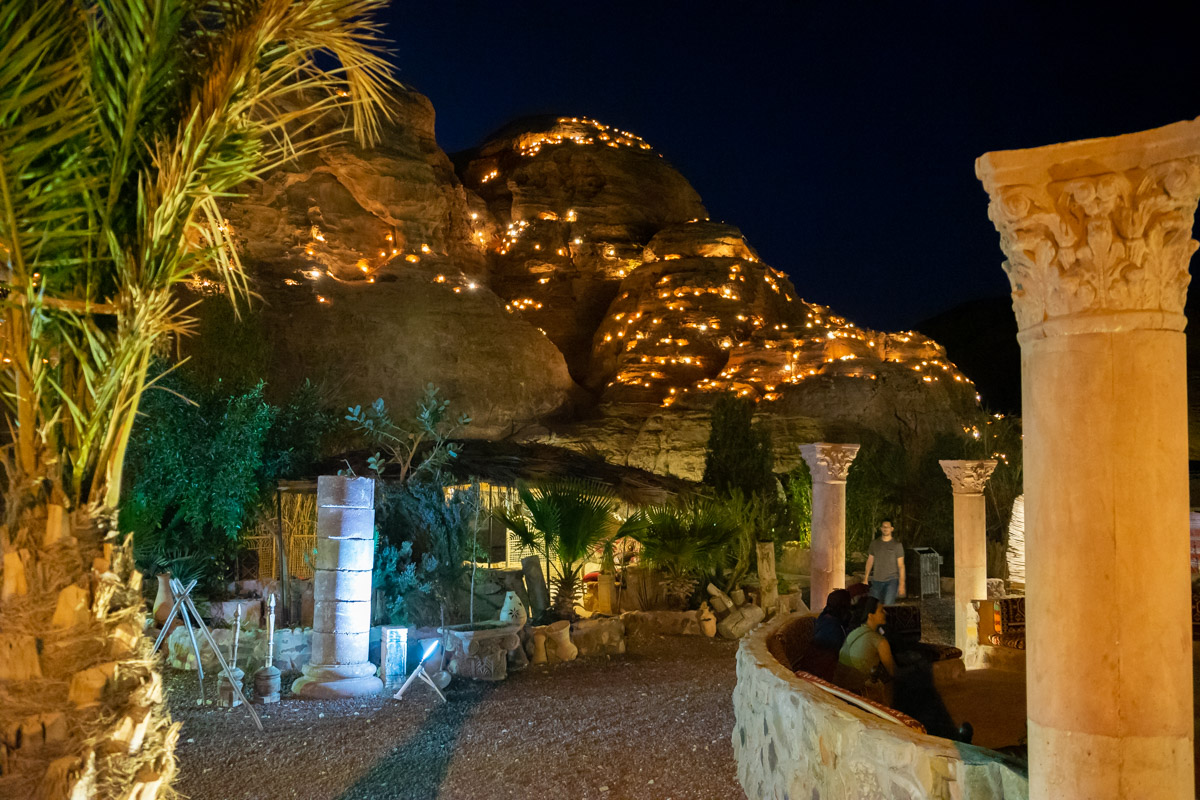 Staying here was not exactly roughing it – communal showers is something I am adverse to, but most other comforts were on hand in this camp. Sitting around the fire with an unending supply of strong sweet tea was a marvelous way to unwind after a day of sightseeing. There was a designated area to charge your electronic devices, and the meals were served in a nicely appointed and decorated dining room. 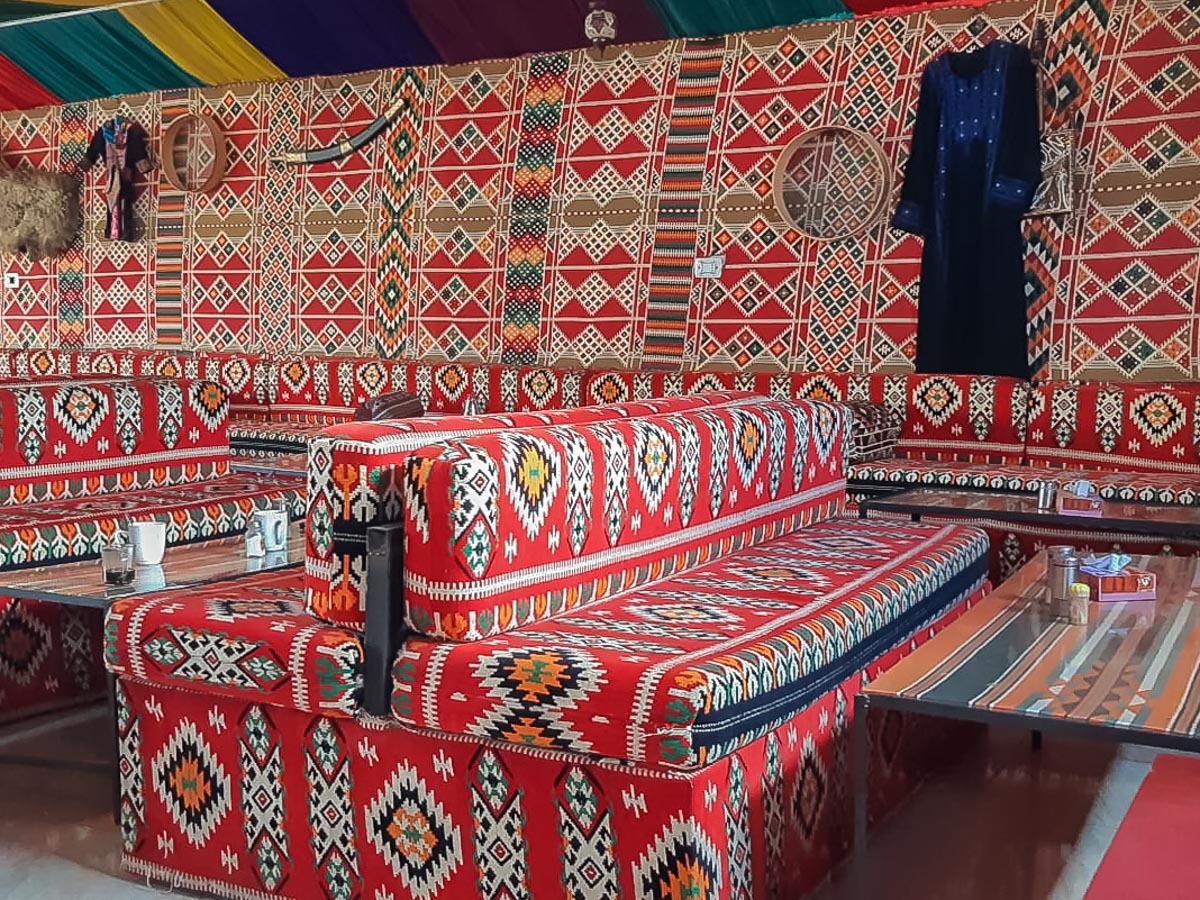 In the morning, our small group happened to be the very last to depart. This is the view of the camp after most people already left on their itinerary for the day.

From here, I went to Wadi Rum, and then back to the border crossing to Eilat.

That was one of the more baffling procedures that I encountered. First, I showed my documents to a Jordanian official, who in return filled out a form that he gave to me. A few meters down the corridor, another official looked at my documents and checked that I had the form. Yet a few more meters down, at the exit of the Jordanian part of the crossing, another official looked at my passport yet again and took the form that the first guy had given me away from me. I then proceeded to the Israeli side of the border, where a lovely young woman took my passport and asked me a number of questions about who I was, what I was doing in Israel and in Jordan, which places I visited, what were the names of my Israeli cousins, and so forth. She then ushered me to a window, where a different person, while looking at my documents, asked me the same questions again, and repeated some of them a couple of times; he then produced a form that I had to keep in my passport. A few steps down the corridor, another Israeli border guard rechecked my passport and the form that the previous guy had given me. Finally, at the exit from the Israeli part of the crossing, yet another lovely young woman looked at my passport again, took the form that I had been given a couple of minutes ago and dropped it into what to my eyes looked like a garbage bin full of similar forms. She then told me “Welcome back to Israel” with a smile and waved me on.

Seven passport checks in total, two forms given to me, two forms taken from me – and clearly a feeling of a successfully executed border transfer on all sides.

I drove back to Tel Aviv that same evening, had another full day exploring it the next day, and with that my Israeli (plus Jordanian, plus a bit of Palestinian and a bit of Turkish) adventure came to its end.

Until the next time, surely!