The second part of our Croatian itinerary had Dubrovnik as the base. Similarly to Split, we gave ourselves only one full day for exploration of Dubrovnik proper but returned every evening for a meal and a stroll, so managed to acquire a certain level of familiarity with the town.

Objectively, Dubrovnik has to be considered an impressive walled town, well deserving its fame as “the Pearl of the Adriatic”. And yet, for me, it left less of an impression than Split, with whom it shares the honor of becoming a World Heritage site in only the second year since the list had been started. This could be due to the town plan: the core of Dubrovnik is mainly about two parallel east-west streets with public spaces at the both ends; small streets run perpendicular to those and turn into stairways that run up to the elevated parts of the town center in the north and south; the northern elevation roughly retains grid structure, with auxiliary east-west streets as subsequently higher terraces; the south side attempts to depart from the grid but only a little. The ordered geometry inside the magnificent walls is mostly due to the erstwhile medieval stronghold having had been largely destroyed by an earthquake in the 17th century and rebuilt alongside post-Renaissance sensibilities afterwards. But it did create a bit of a visual dissonance for me: the wide-angle views of Dubrovnik are ever stunning, while at close inspection the town feels somewhat contrived.

The wall circuit is an unmissable attraction specifically because of many opportunities for wide angles. Here is the first look along the main east-west artery, Stradun. 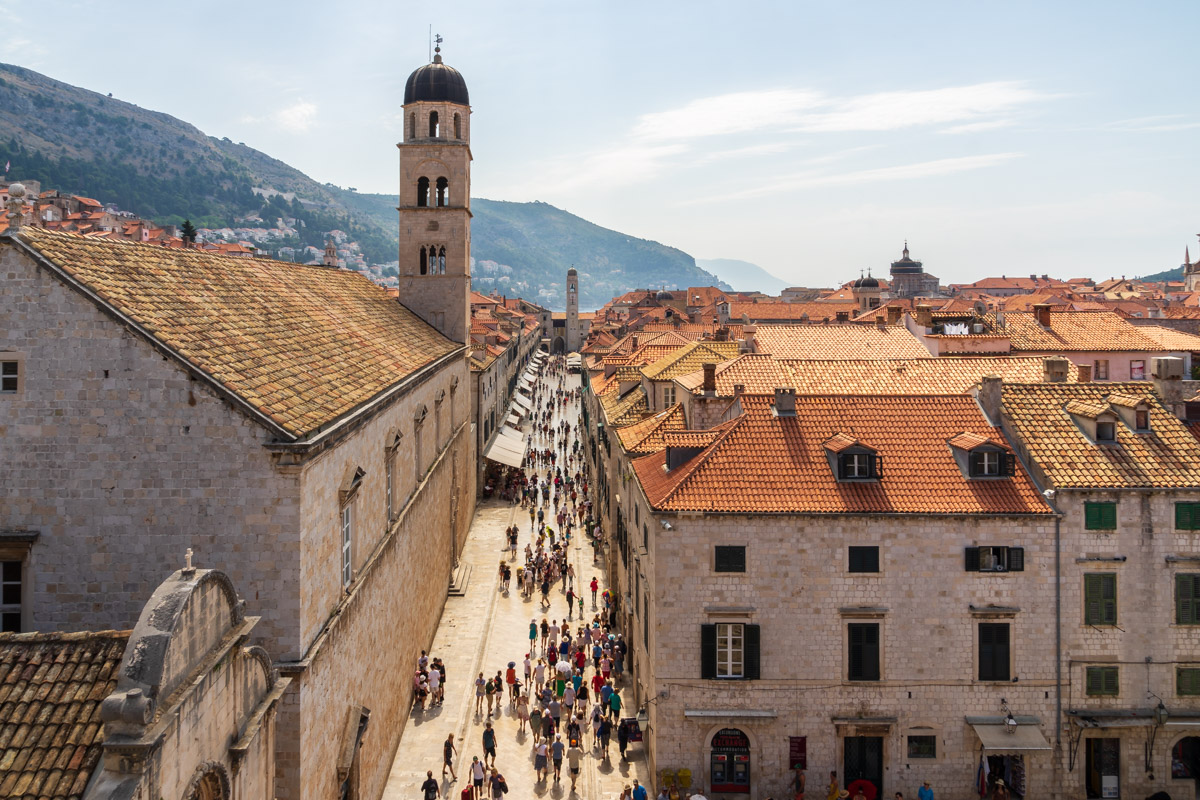 A slight shift in perspective allows a look at the grand Onofrio Fountain, which anchors one of the main open public spaces in town. 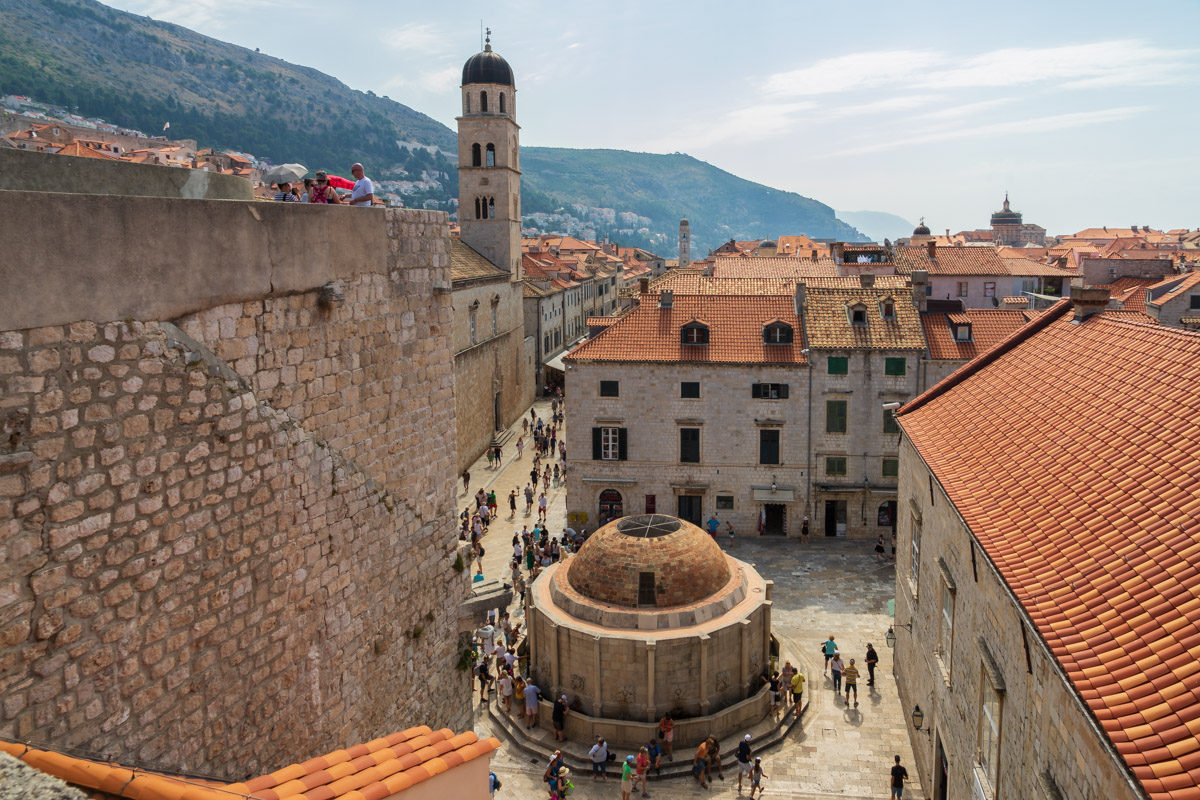 How about a King’s Landing shot?! 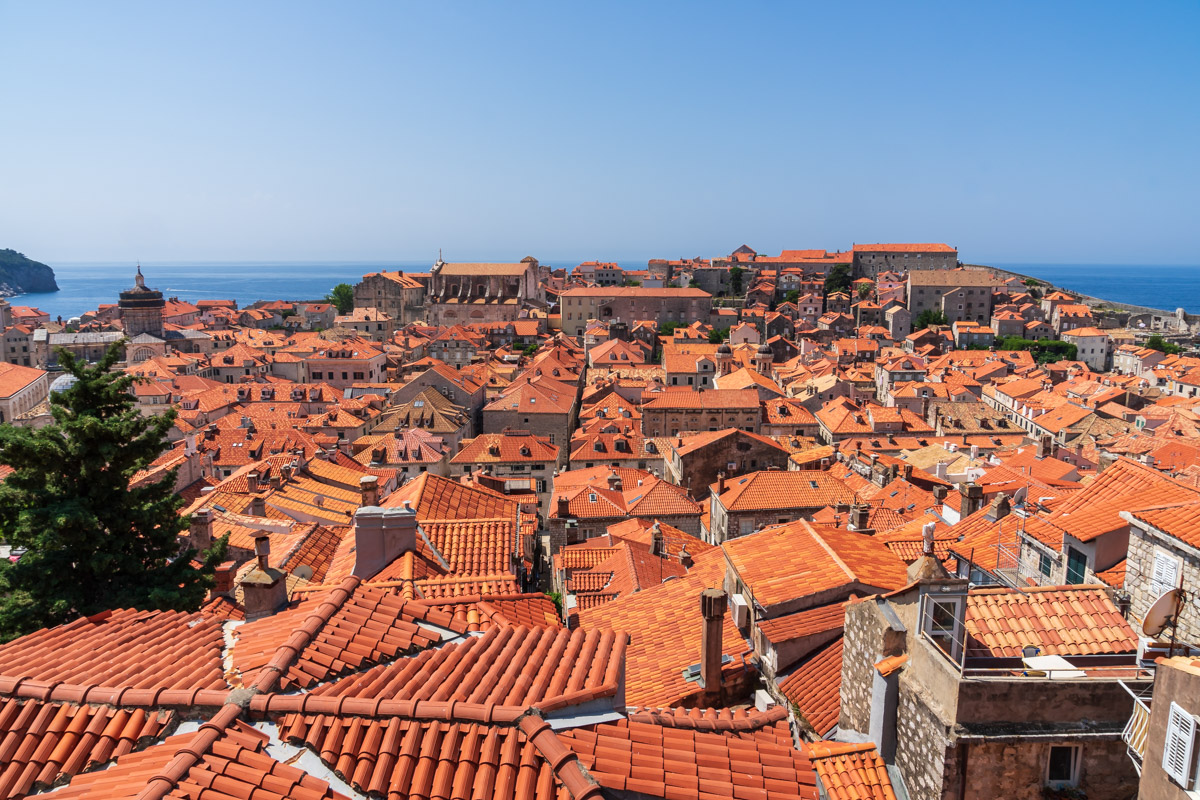 At longer focal length, you can see the few major points of interest among the sea of red roofs. The bell tower is the eastern bookend of Stradun. Nearby is both the beautiful church of Saint Blaise and the Dubrovnik Cathedral. 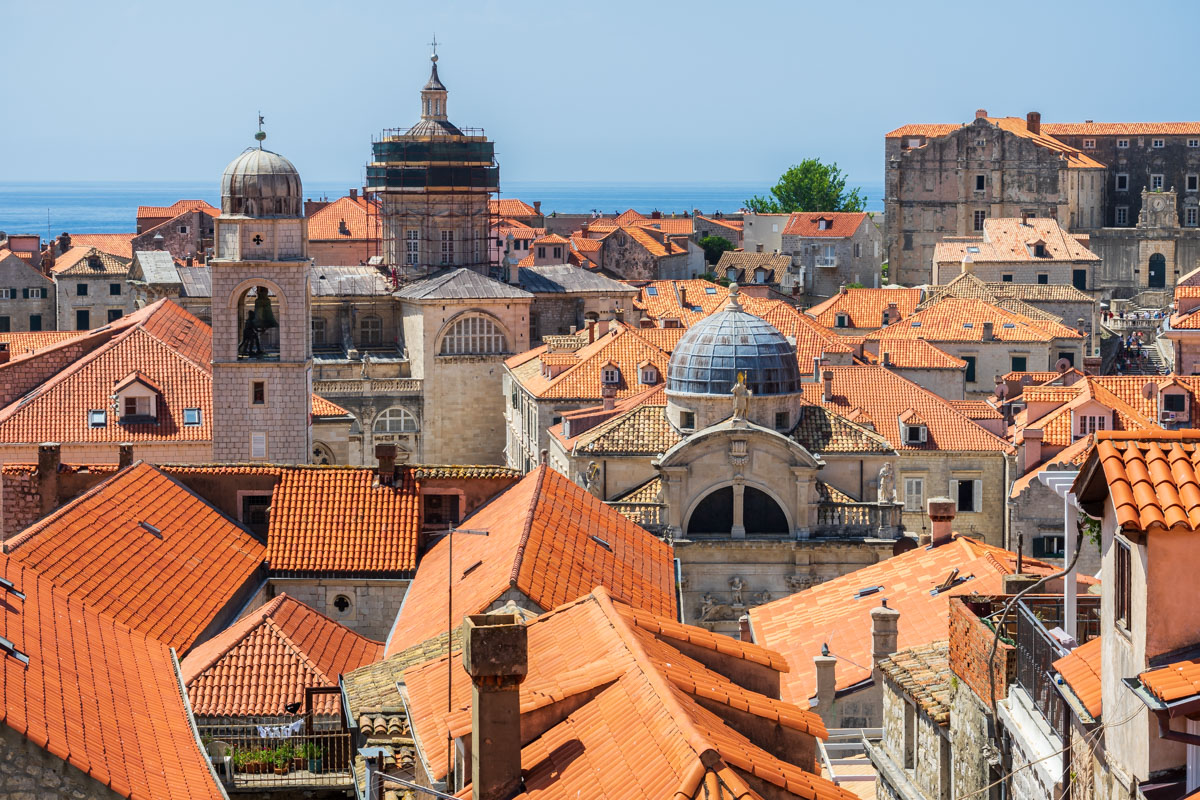 A fragment of the walls, the bay, and the younger portion of the city running up the seaside hills. 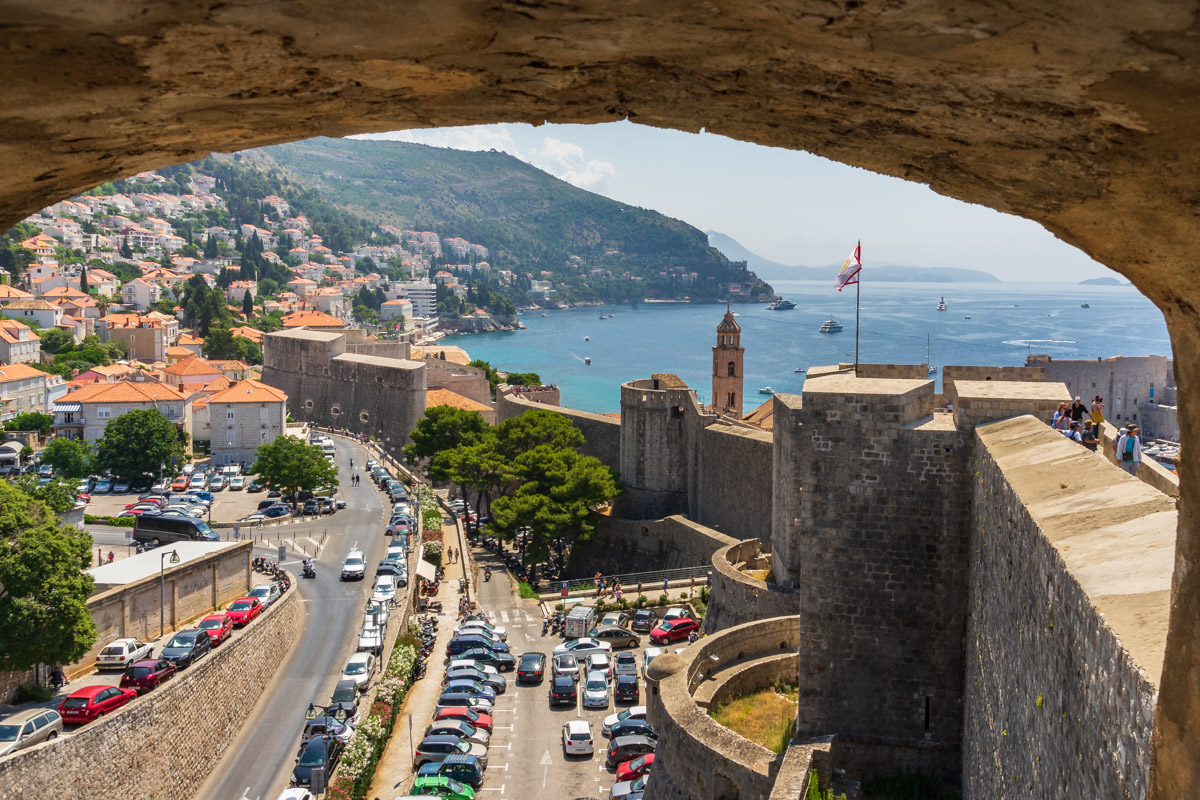 Fort Lovrijenac or St. Lawrence Fortress, a separate part of Dubrovnik’s defenses on a rocky outpost outside town walls. 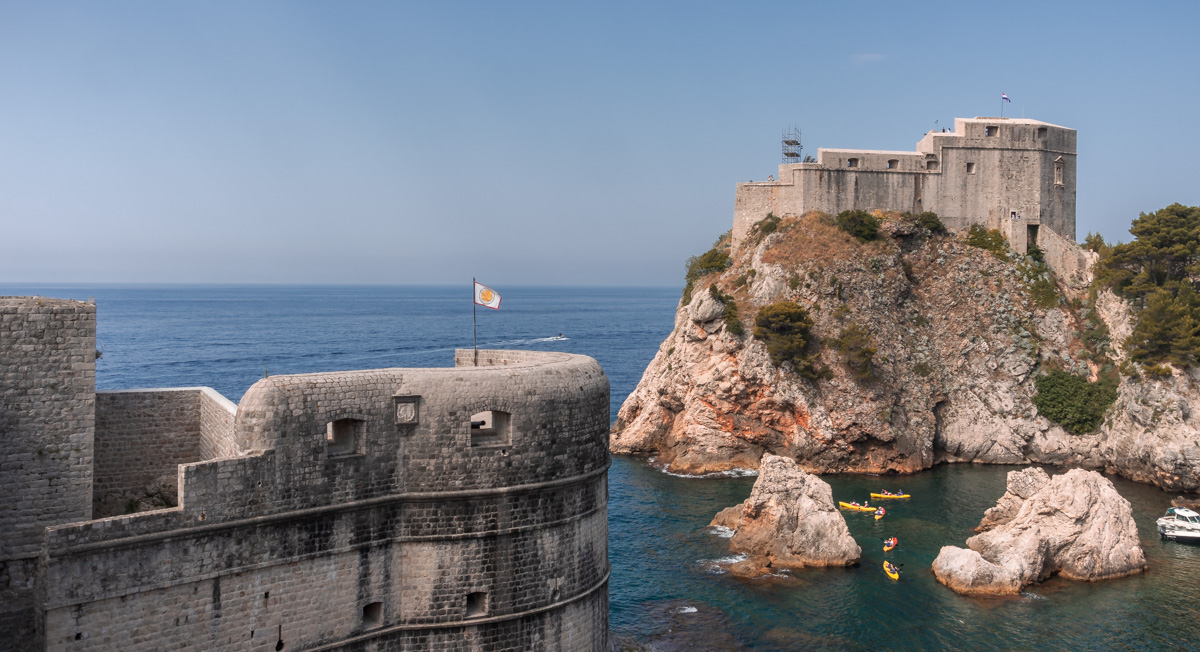 This is the western and the busiest entrance to the walled town, called Pile Gate, photographed here in uncommon serenity at around 6am. It was built in the first half of the 16th century. 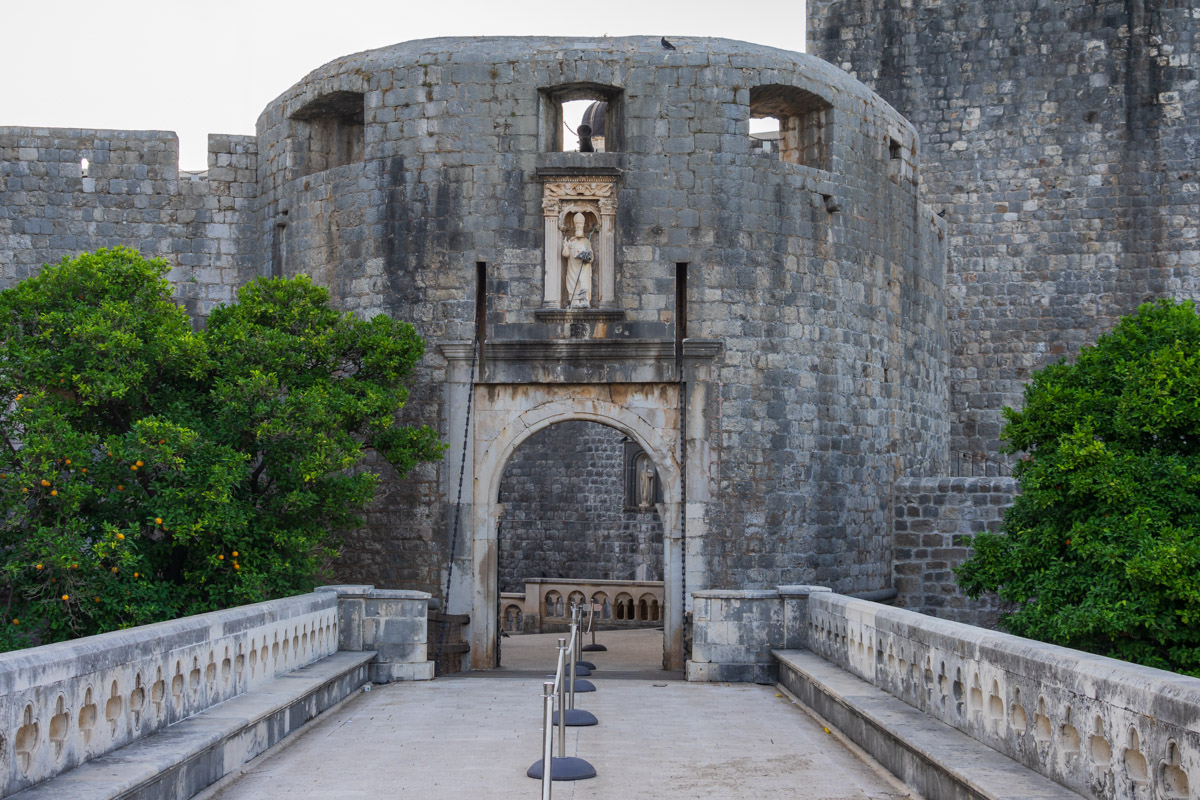 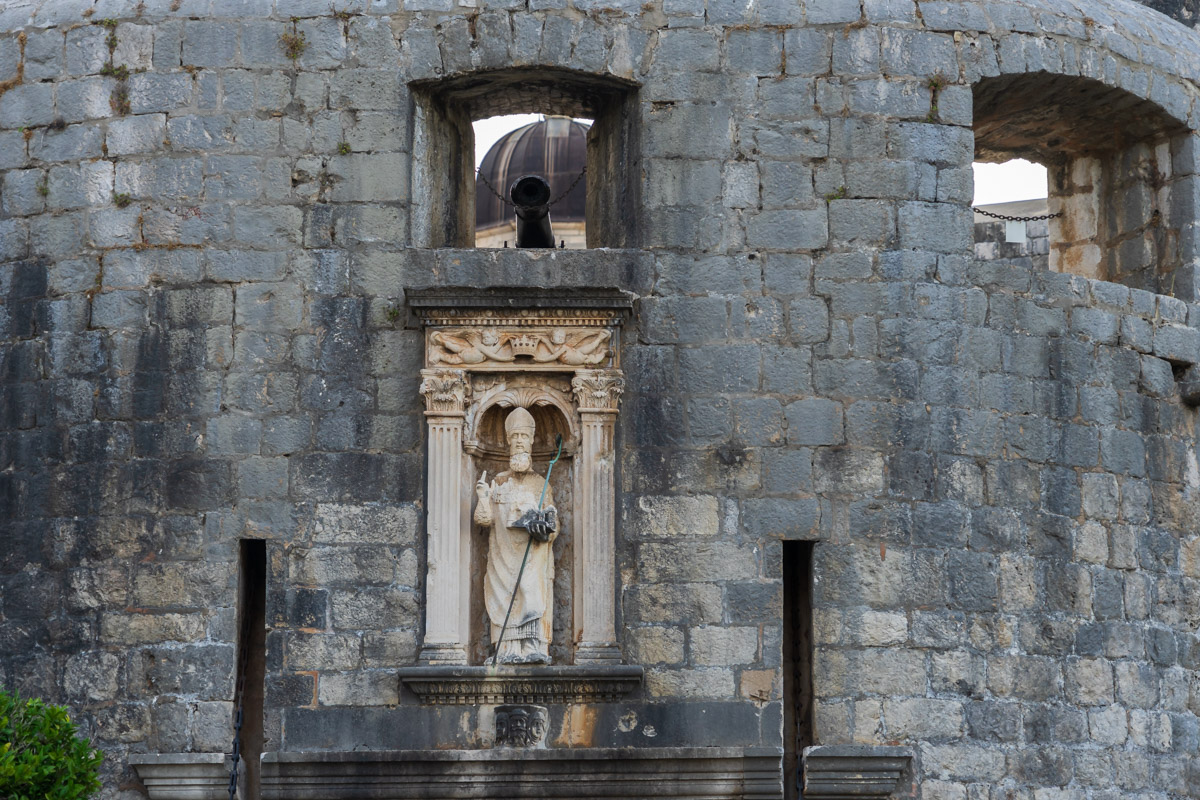 Another early morning shot, with the Large Onofrio fountain as the main feature. The fountain was built in 1438 but only the 16 carved masks remain from the original lavish decorations. During the day, all 16 faucets provide cold drinking water to passerby, but at night the water supply is turned off. 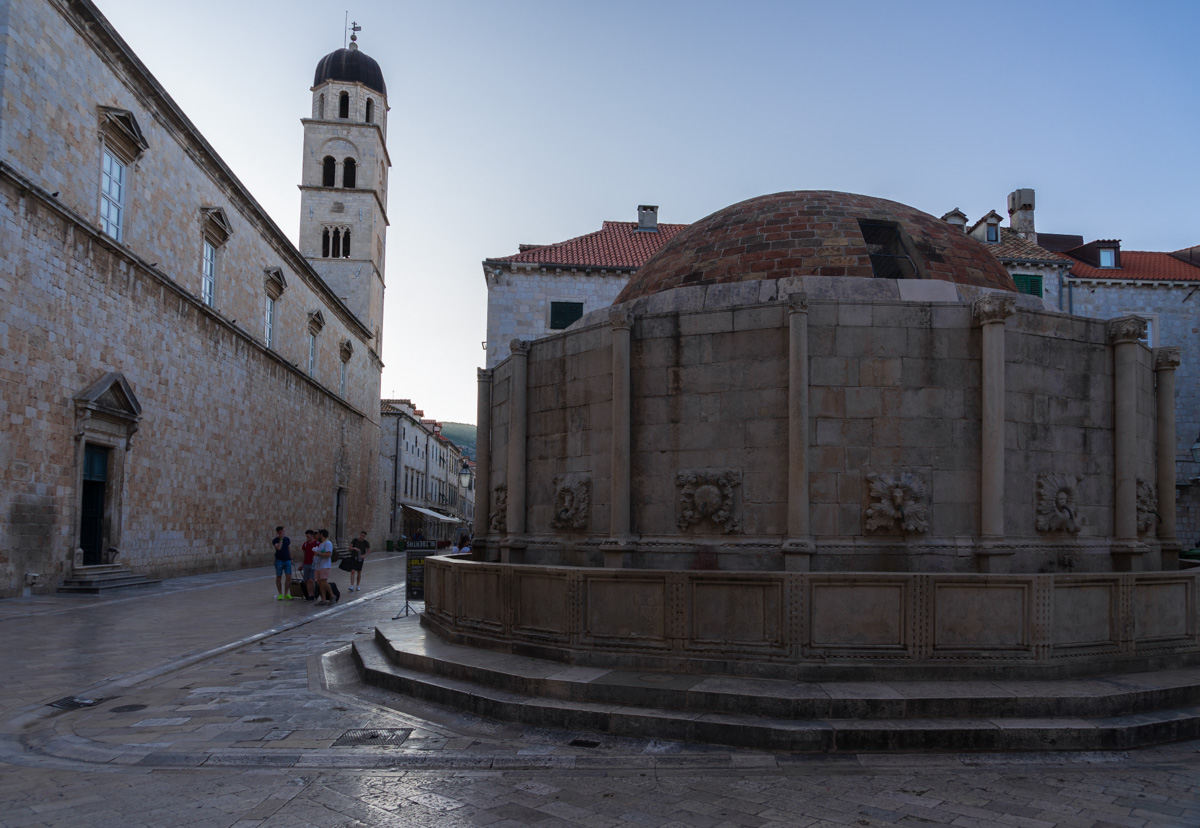 In this perspective, we are at the end of Stradun near Pile Gate. At the opposite end of the street, by the bell tower, sits the Small Onofrio fountain, built by the same architect at the same time.

And now we walked a few dozen meters along Stradun towards the bell tower. 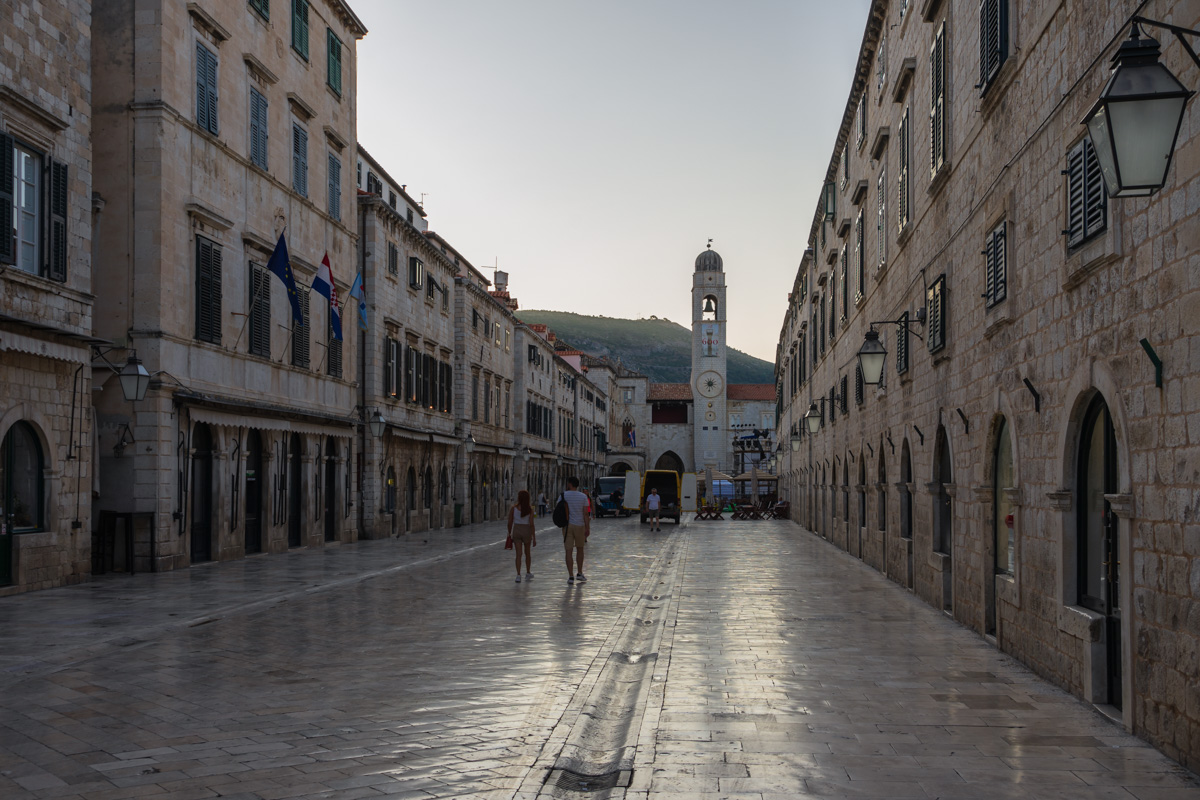 Here are a couple of examples of the cross streets, one running up the hill and the other in its flatter portion near Stradun. 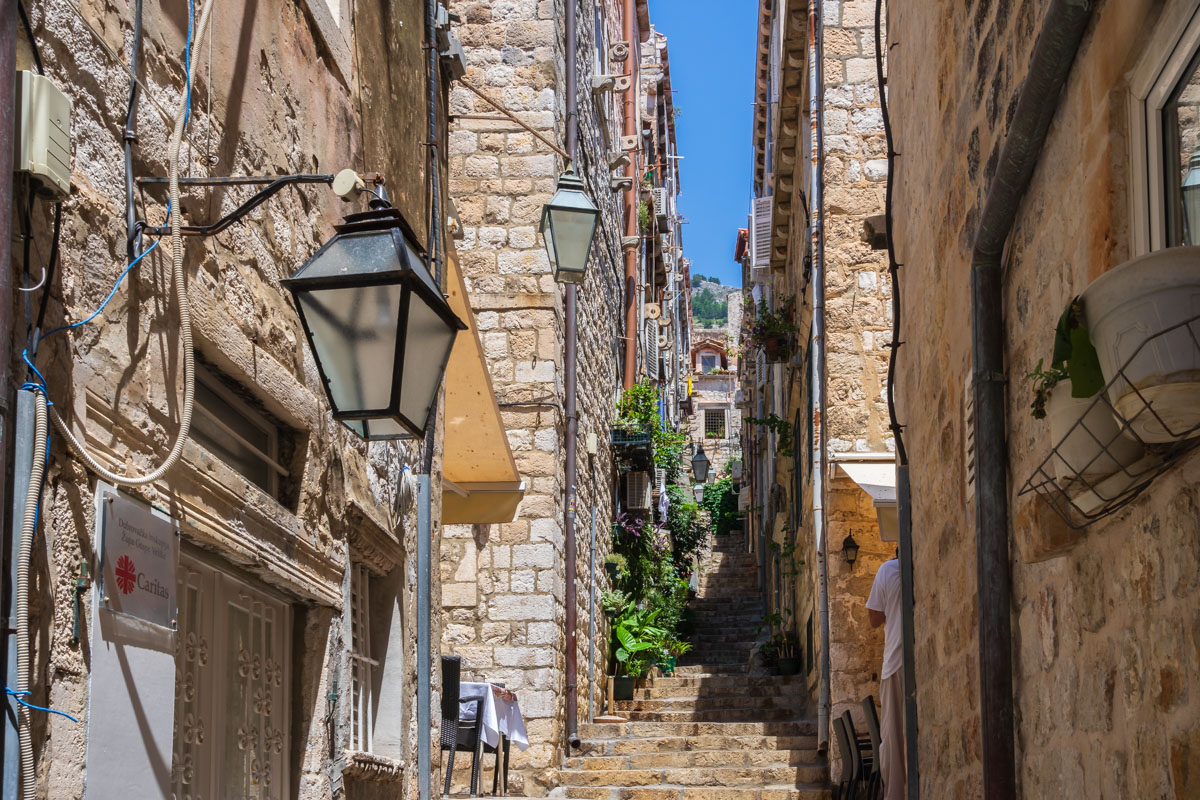 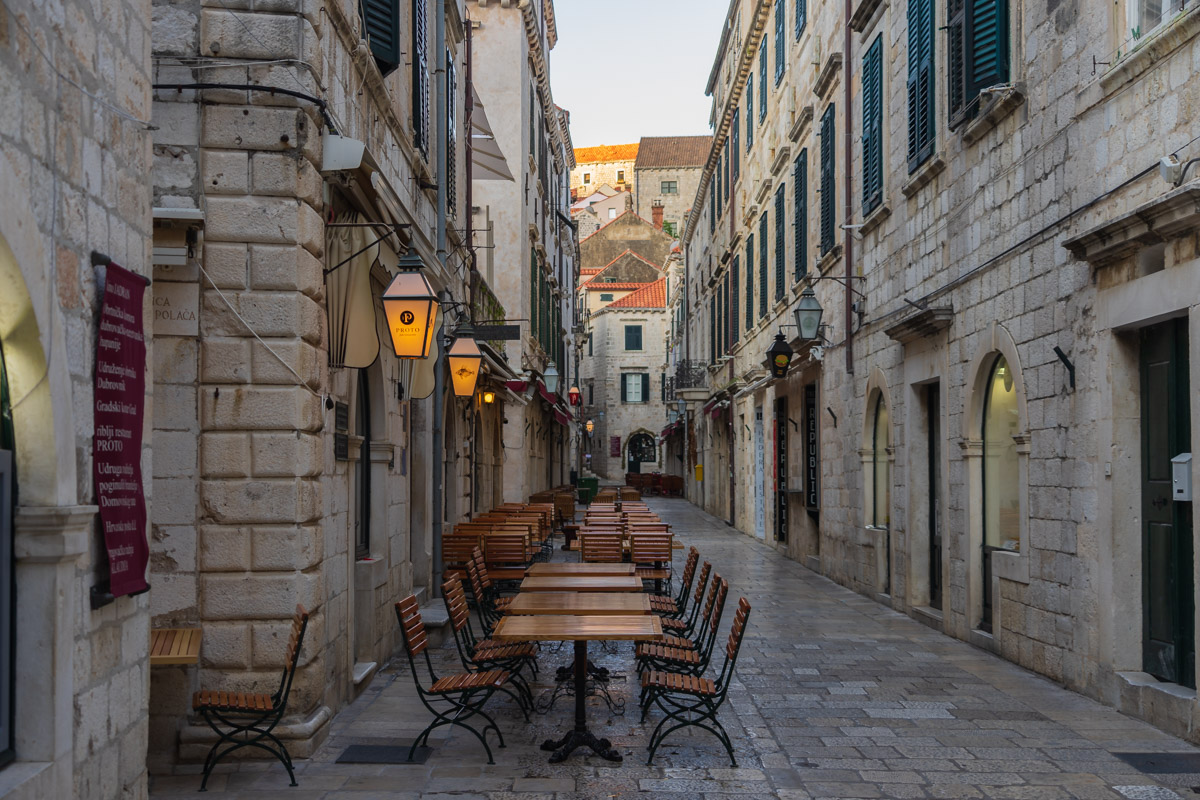 Wherever there is space for an outdoor restaurant seating, you may be sure it will be used in Dubrovnik.

The architecture within town walls is fairly homogeneous with a number of exceptional highlights. One of such highlights is Rector’s Palace, repeatedly destroyed and rebuilt over the centuries. The Renaissance columns of its porch survived from a 15th century reconstruction. 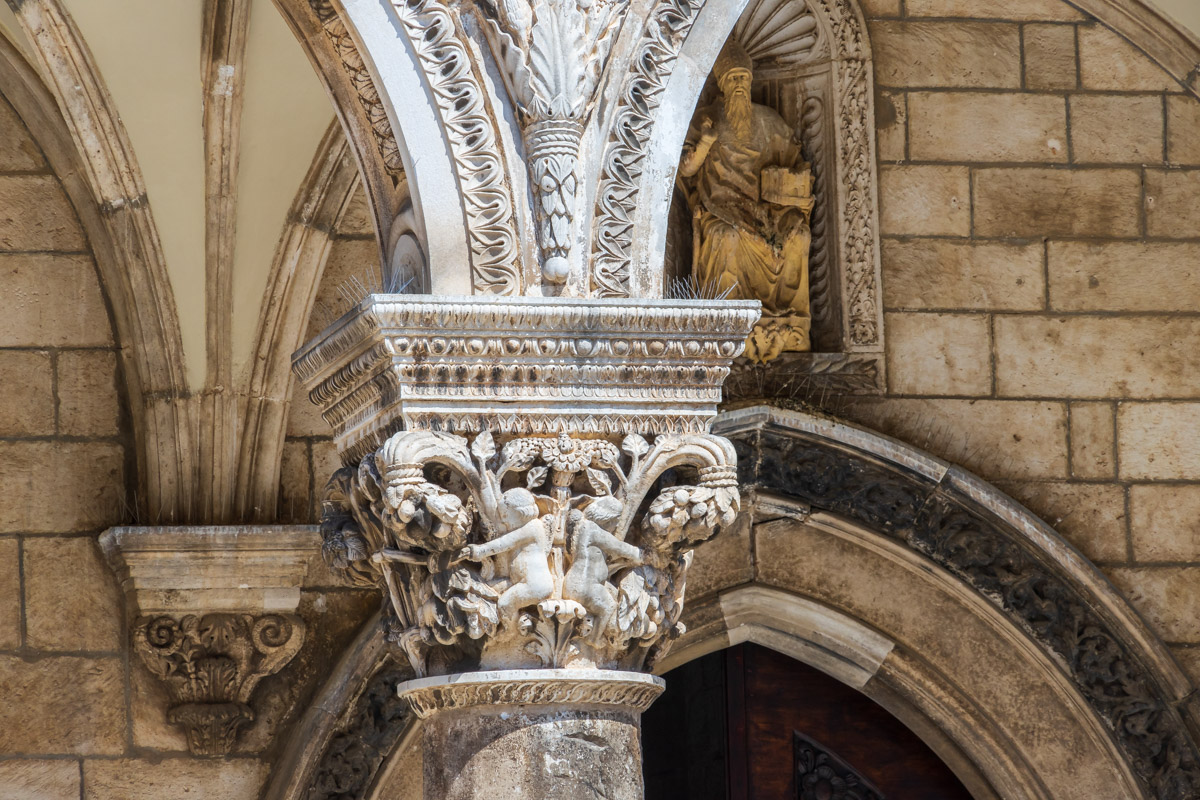 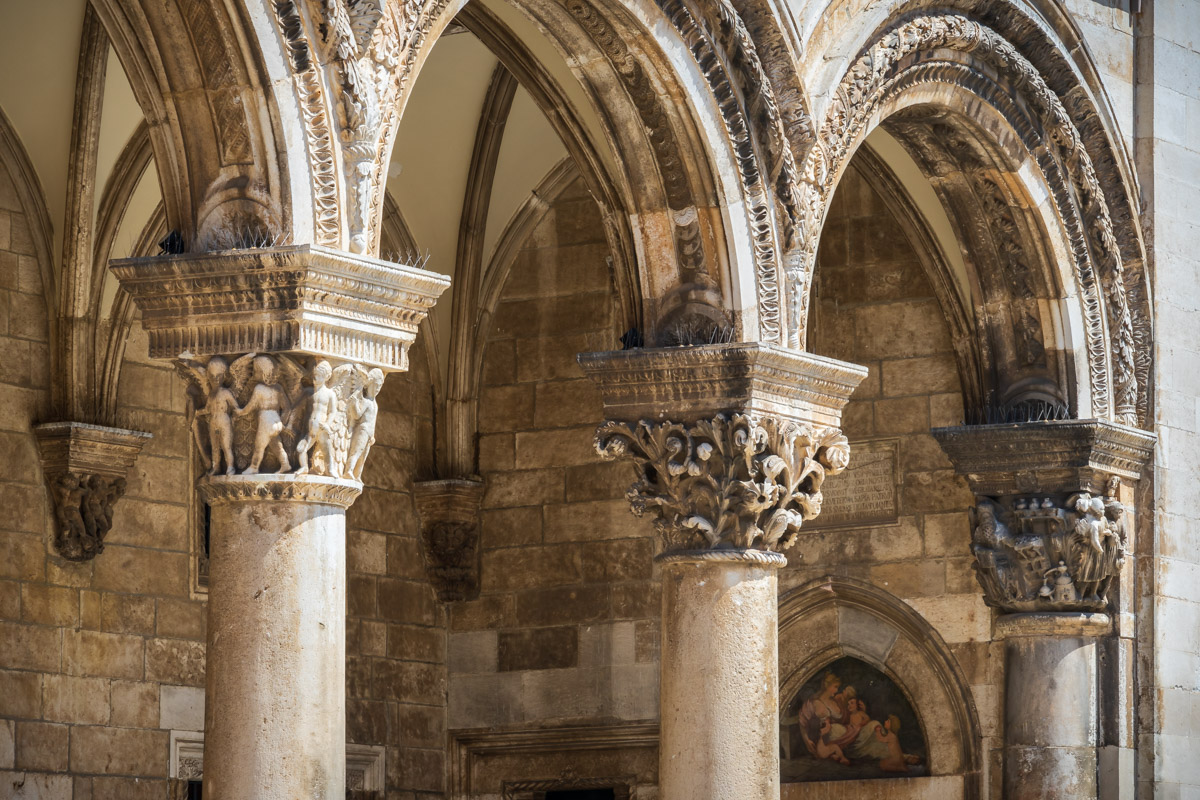 Another eye-catching palace, Sponza, owes its name to the cistern that on this spot used to collect water to be piped into the drinking supply. The mixed Gothic and Renaissance style building was constructed in the early 16th century. 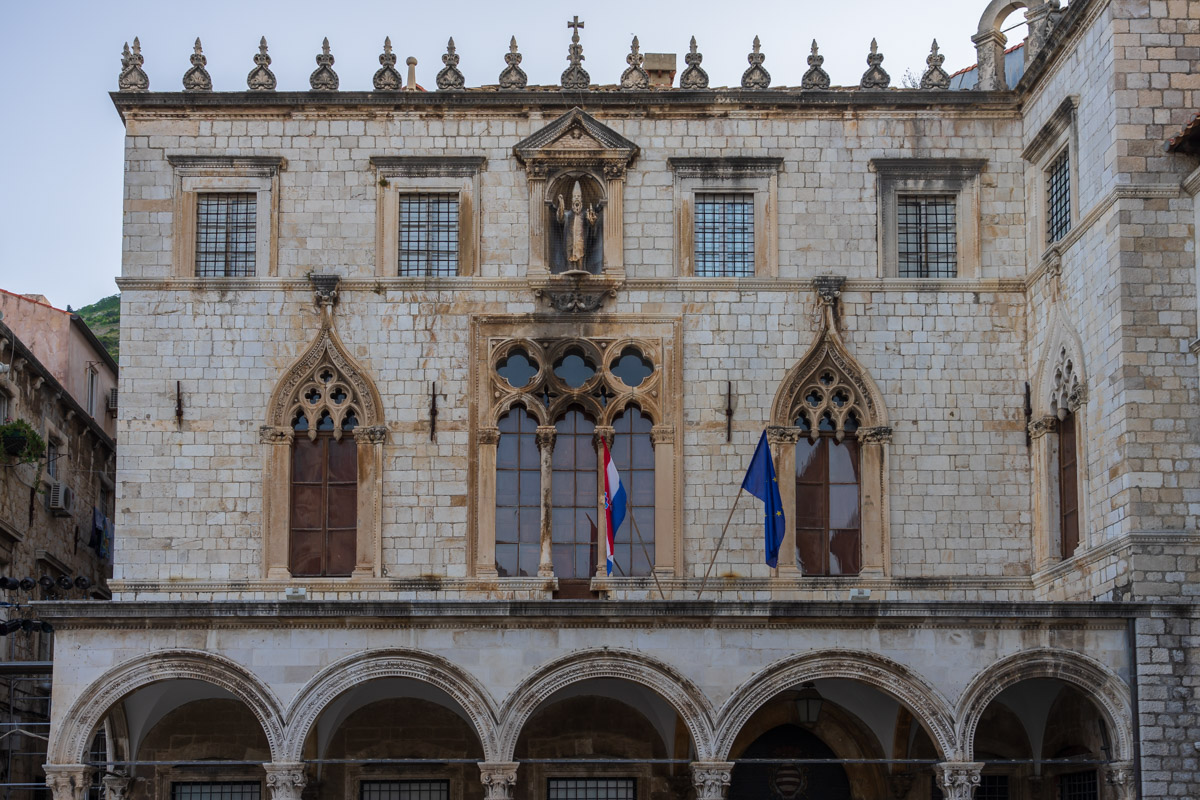 Rector’s Palace offers a varied but far from extensive cultural historical exhibition, and there are at least 3 churches – Saint Ignatius, Saint Blaise, and the Cathedral, in order of descending impressiveness of the interior – that are well worth a visit in Dubrovnik. Among the finest points of interest in town is also the cloister of the Franciscan Monastery, decorated with frescoes and superb details. 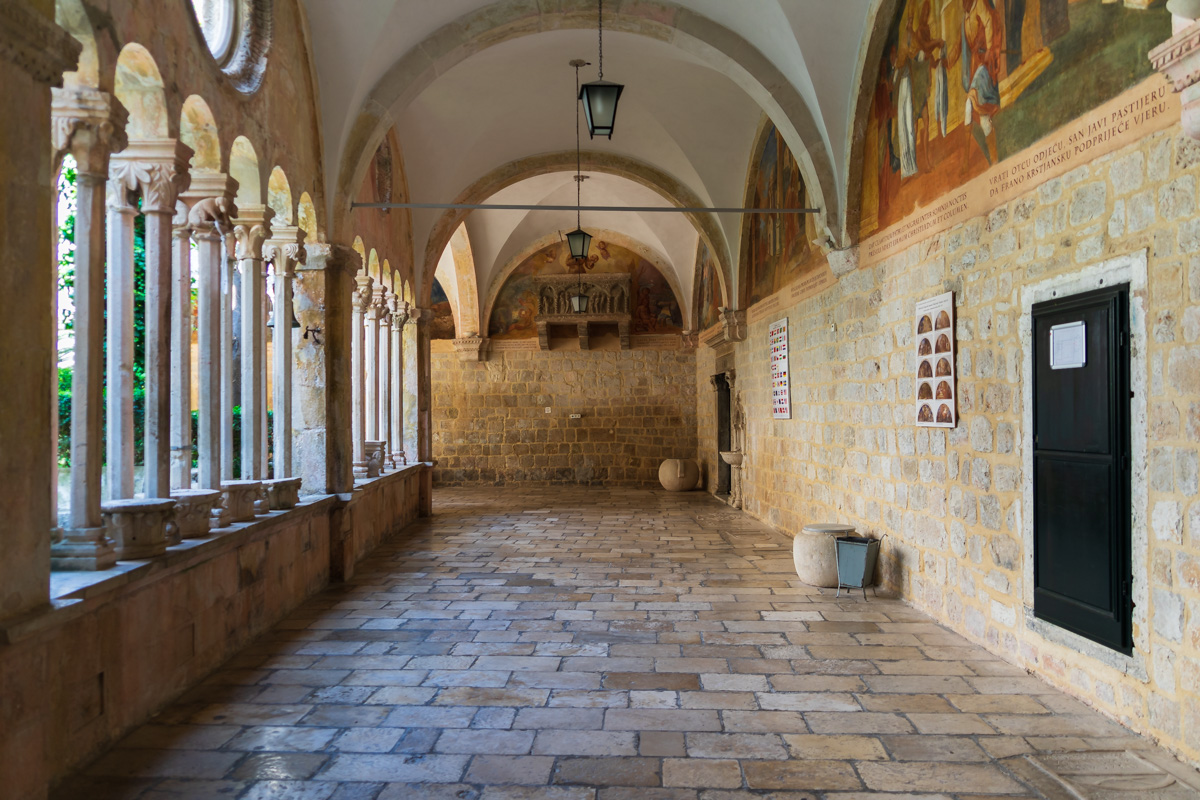 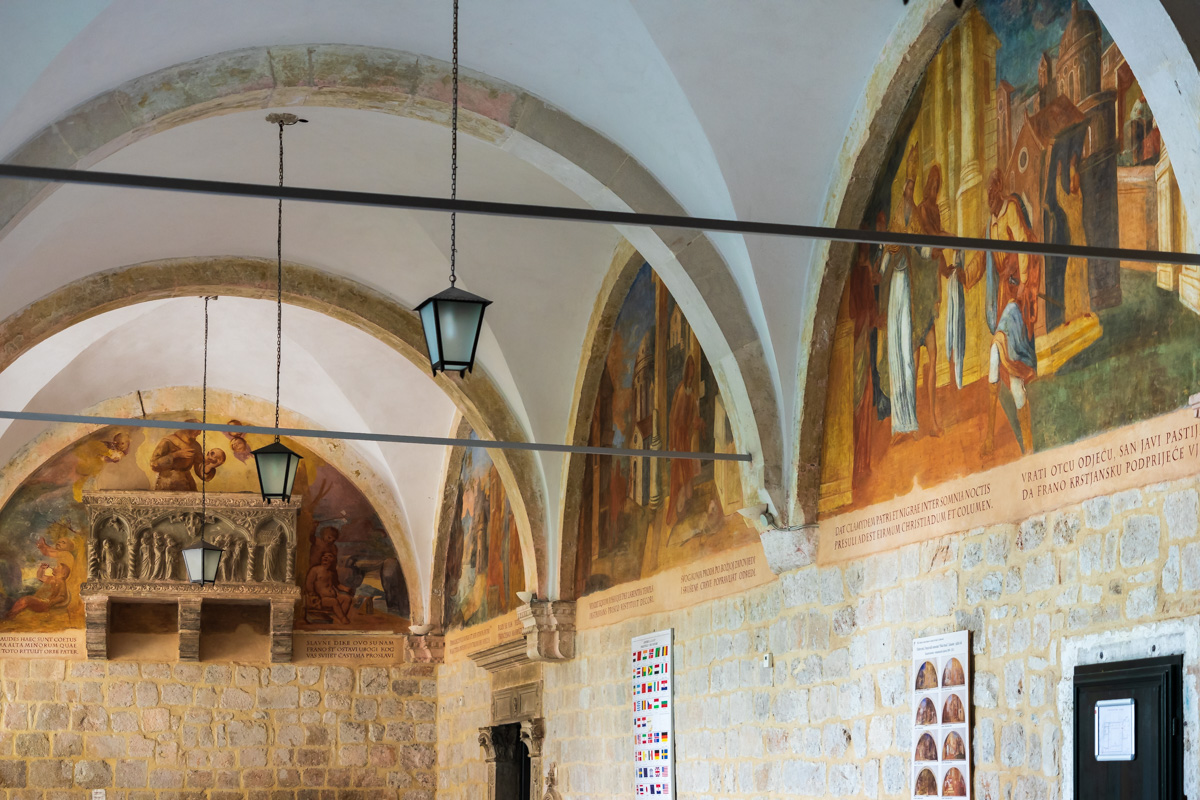 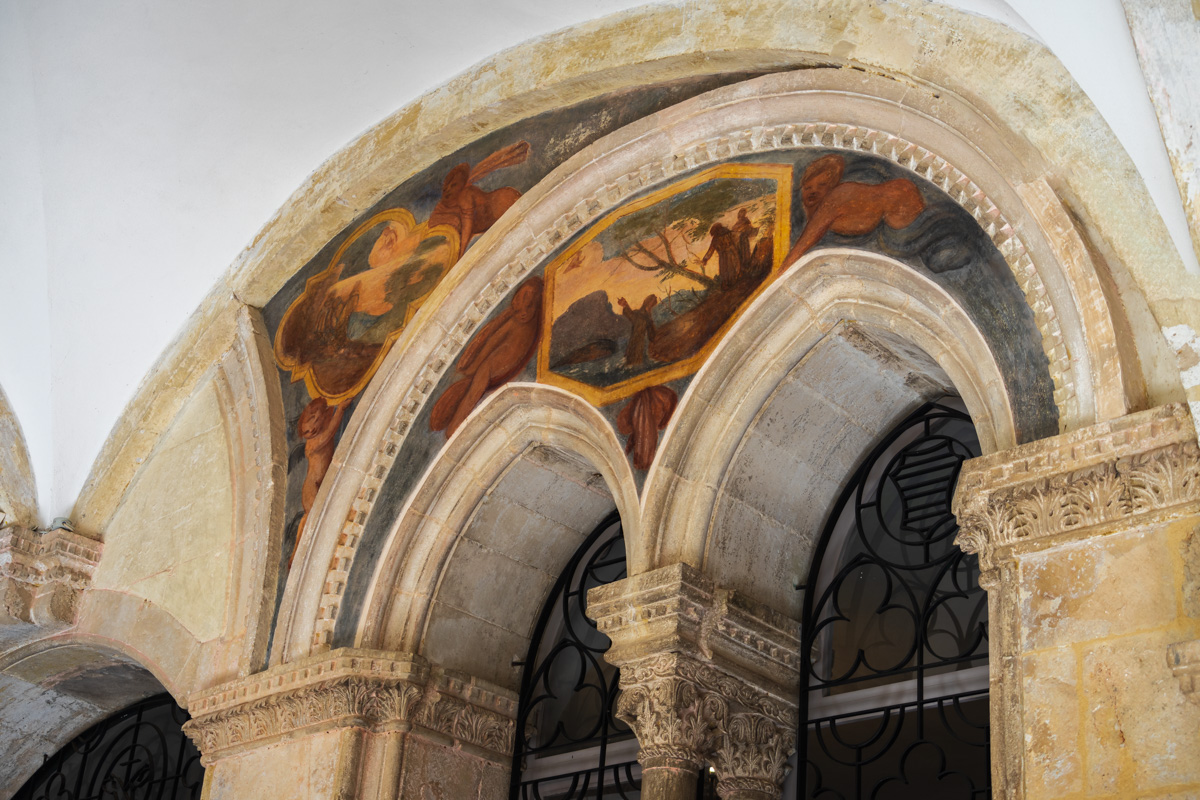 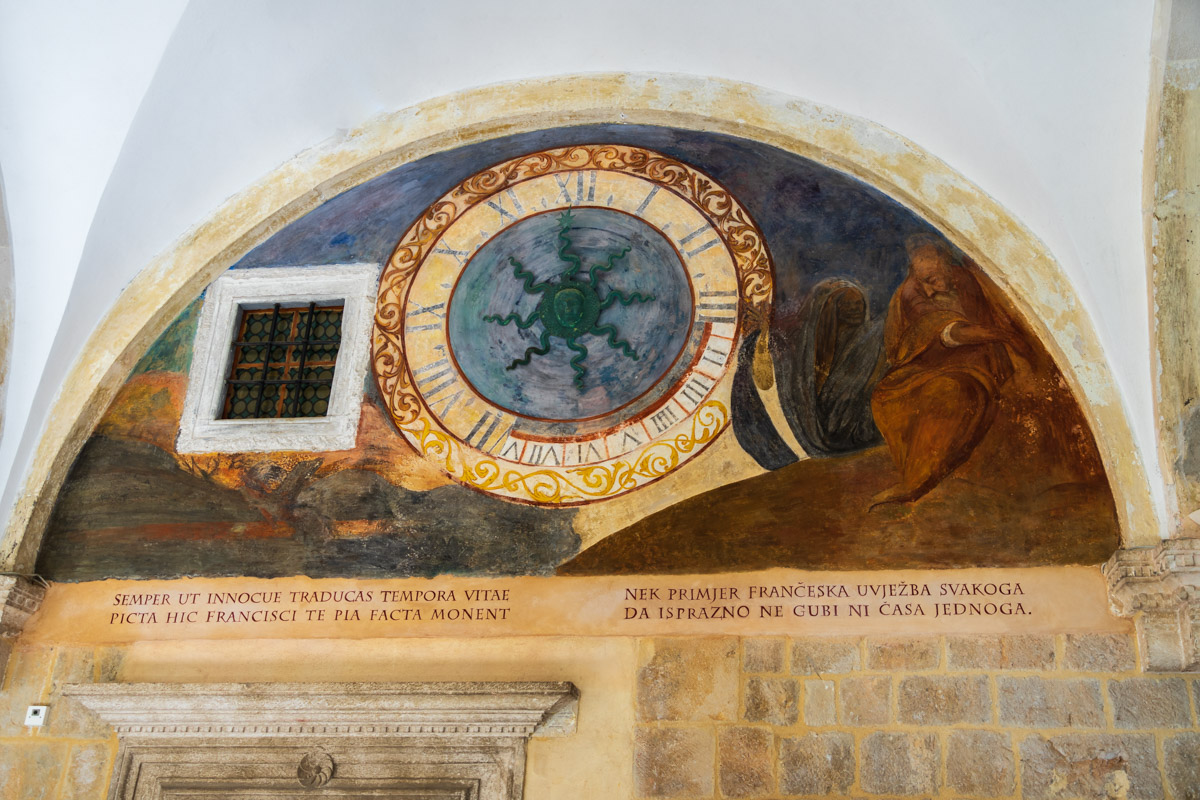 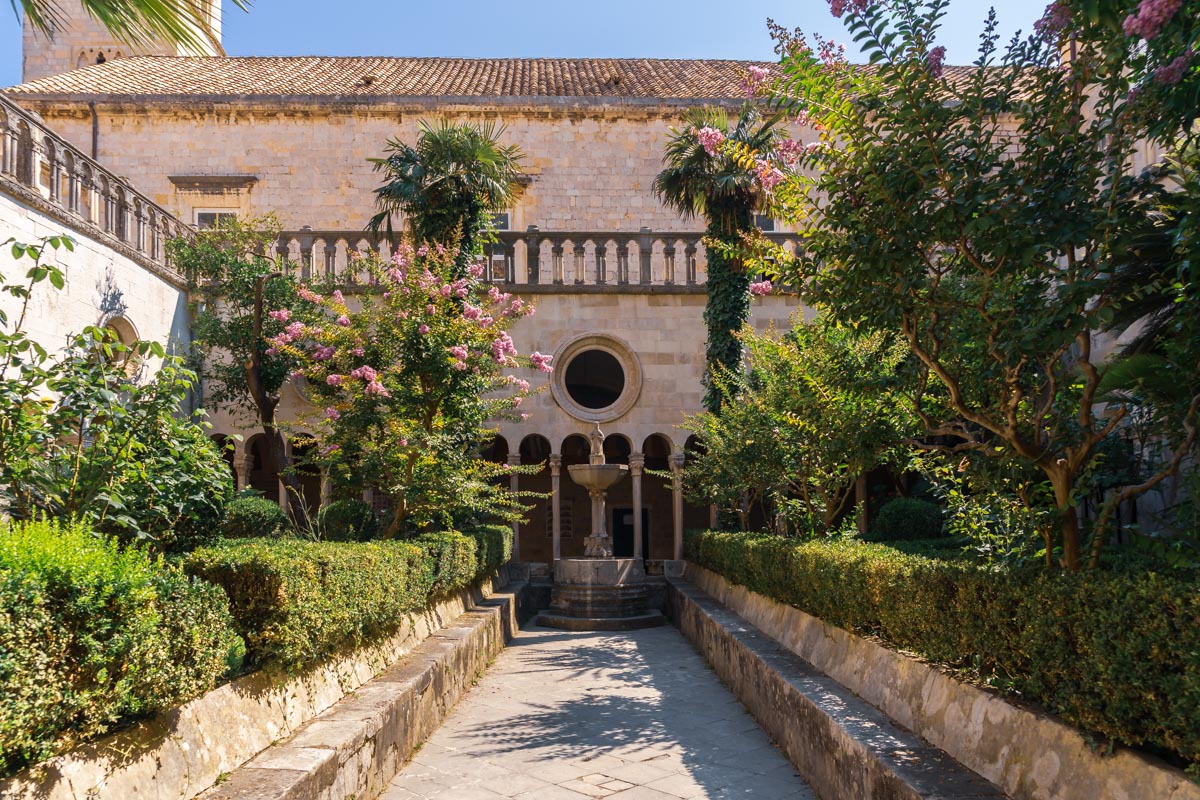 A pharmacy in operation since 1317 can also be visited on the premises of the monastery.

The staircase that leads up to the church of Saint Ignatius from the market square of Gunduliceva Poljana is a magnet for fans of the Game of Thrones. If you want it largely to yourself, you have to come here at dawn. 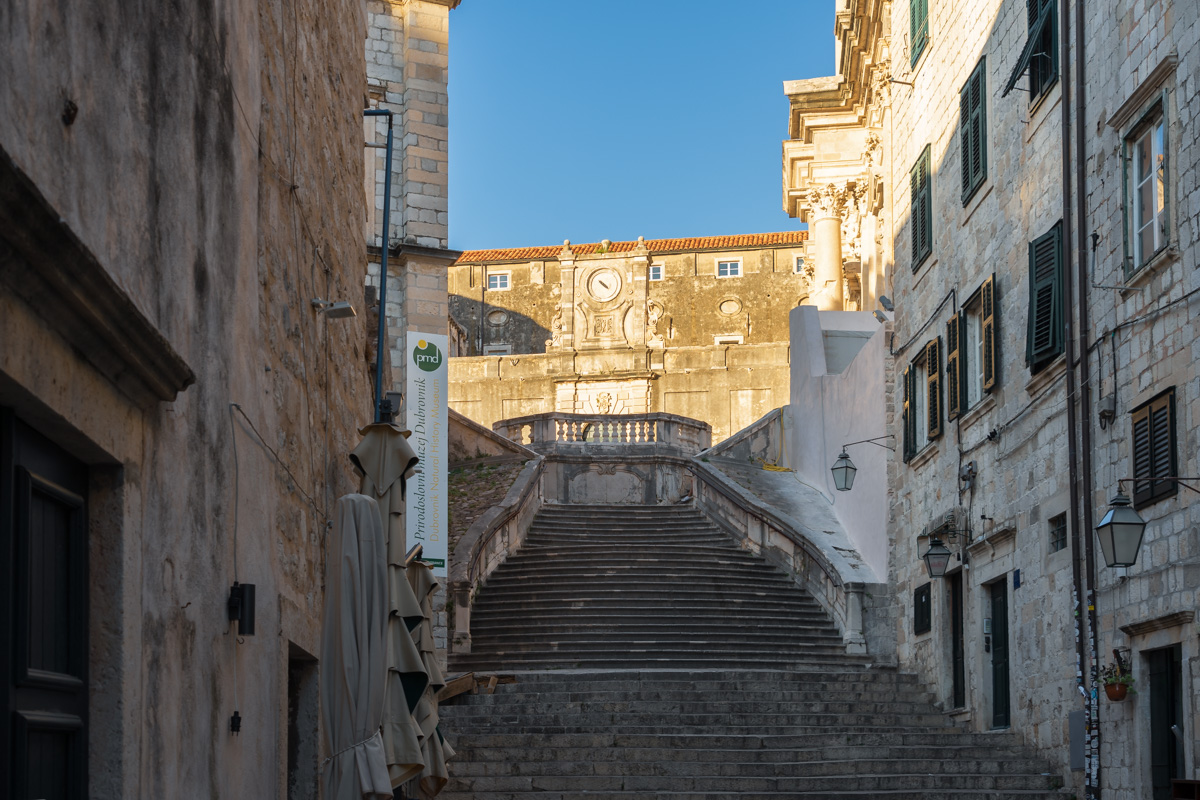 A daytime picture taken on the aforementioned Gunduliceva Poljana, with the monument to the local famous poet Ivan Gundulić in the foreground. 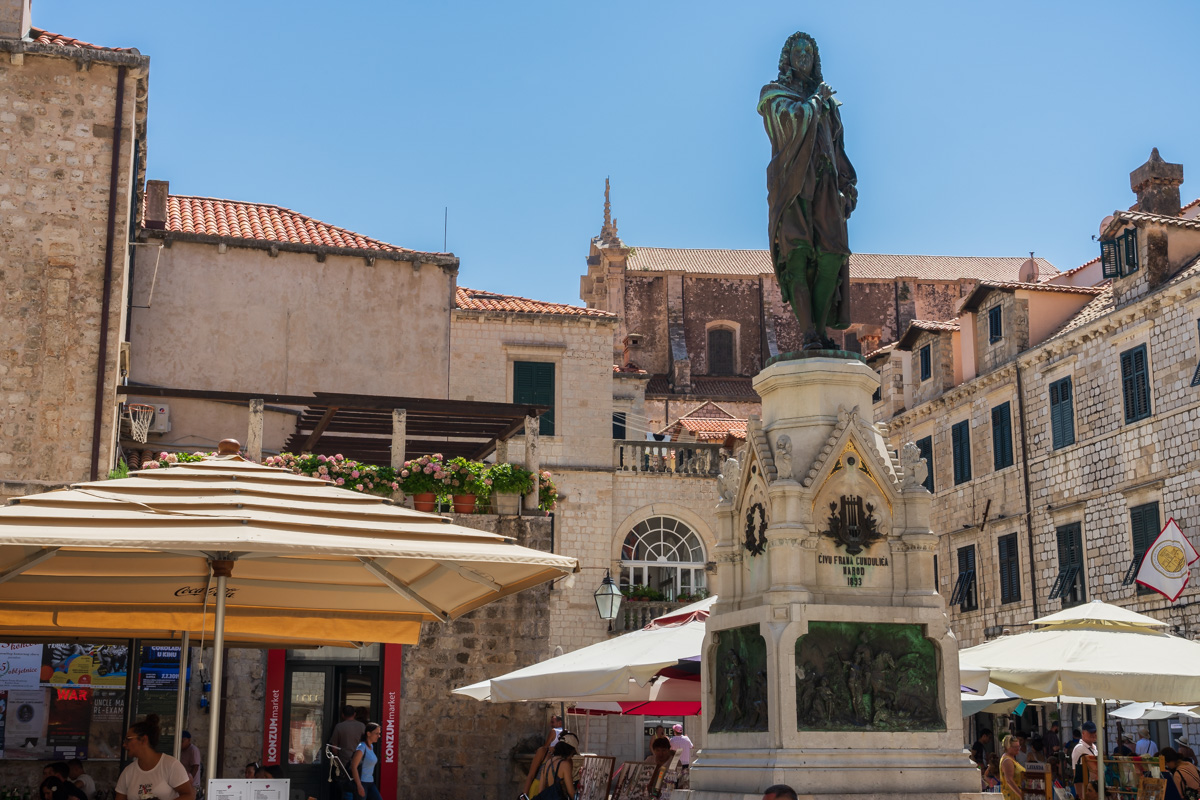 Another monument to a famous local Renaissance artist, playwright Marin Držić, happens to be the primary attraction in Dubrovnik for those in need of good fortune. 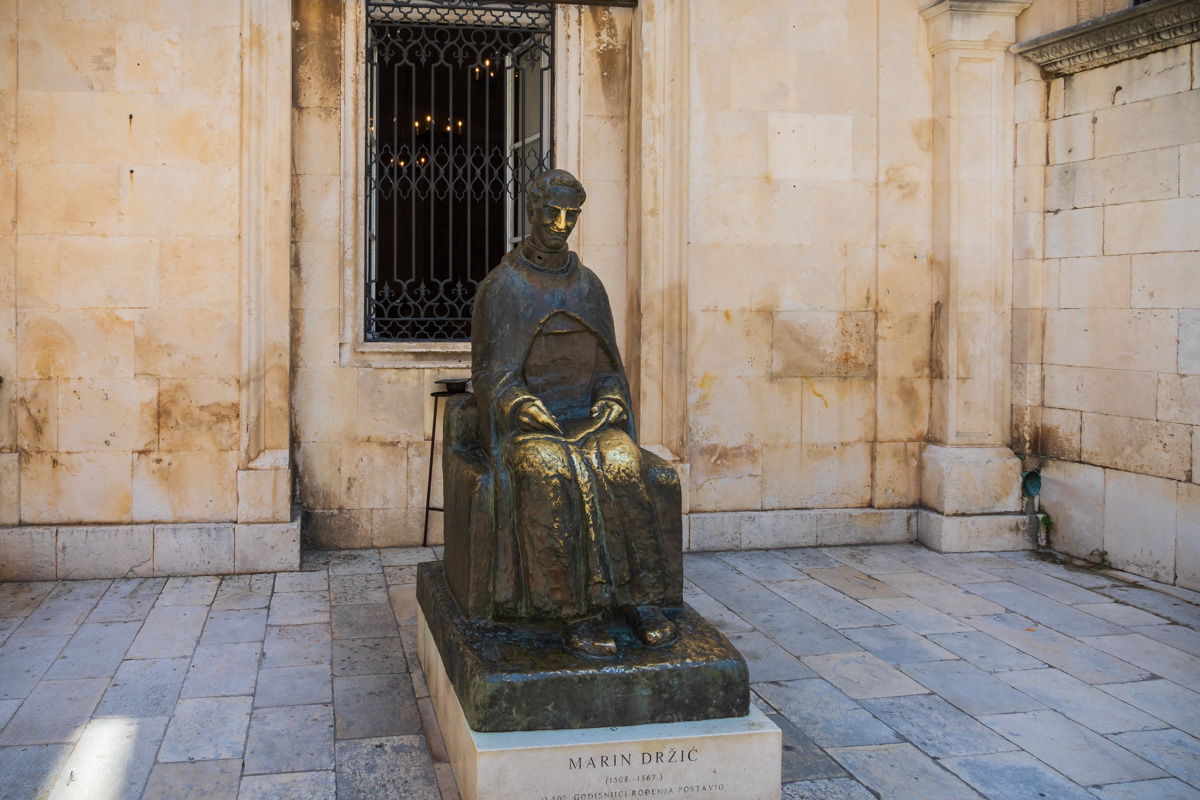 A look up towards Mount Srd, connected with the city below by cable car. 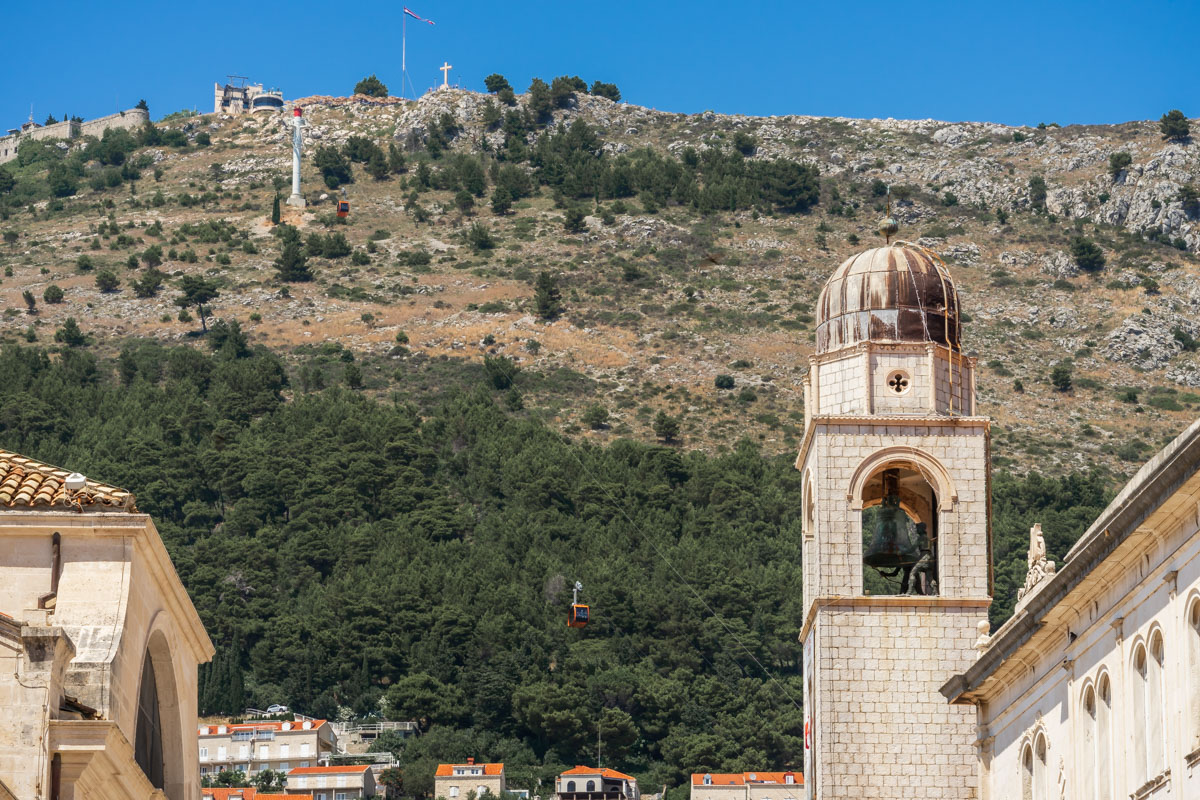 A wider angle of the same perspective, taken in the early hours when cable car is not running. 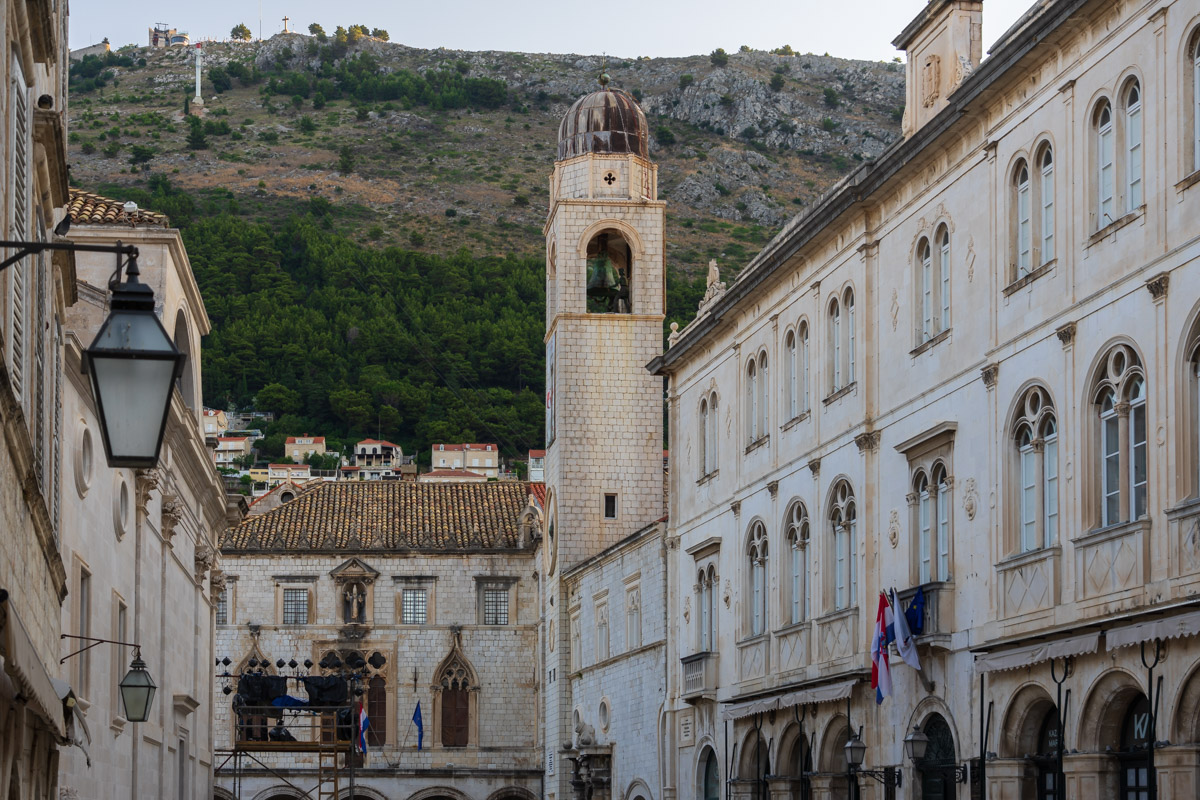 A different perspective towards the hills where the contemporary part of Dubrovnik is built up. 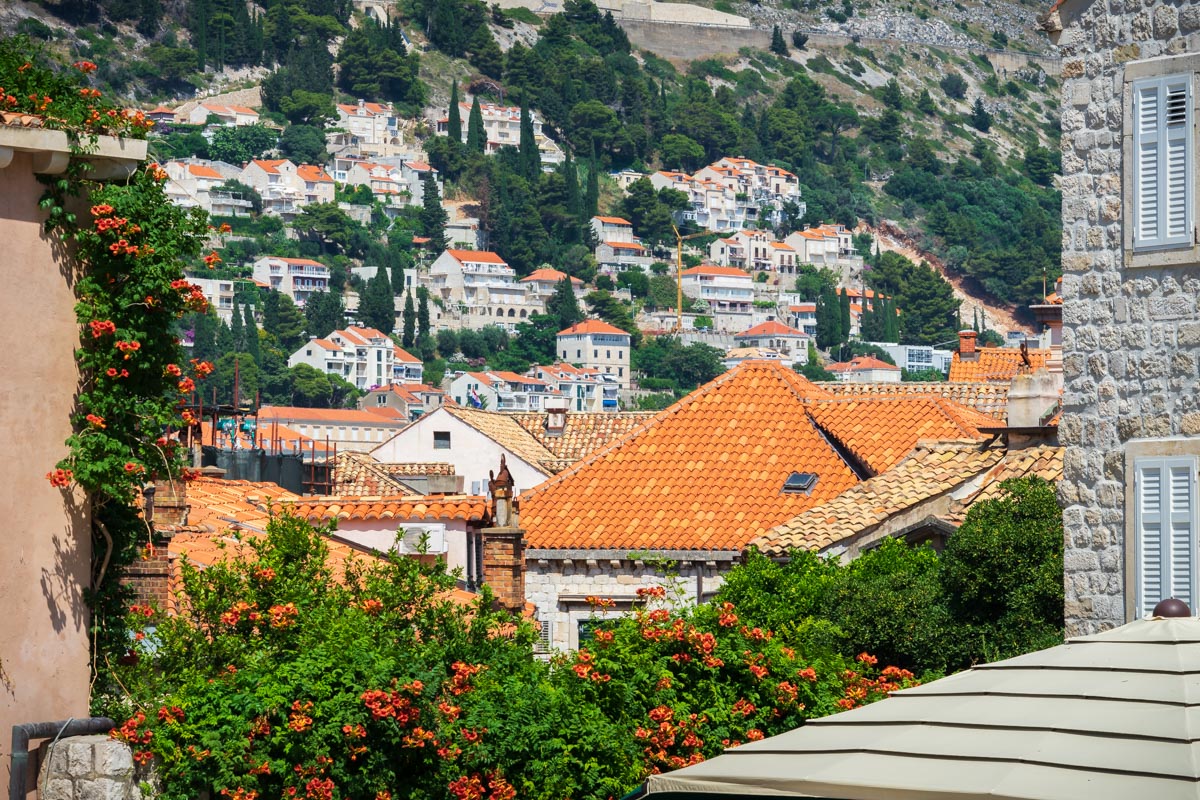 At the eastern entrance into the walled city still early enough for practically anyone except the most determined photographers. 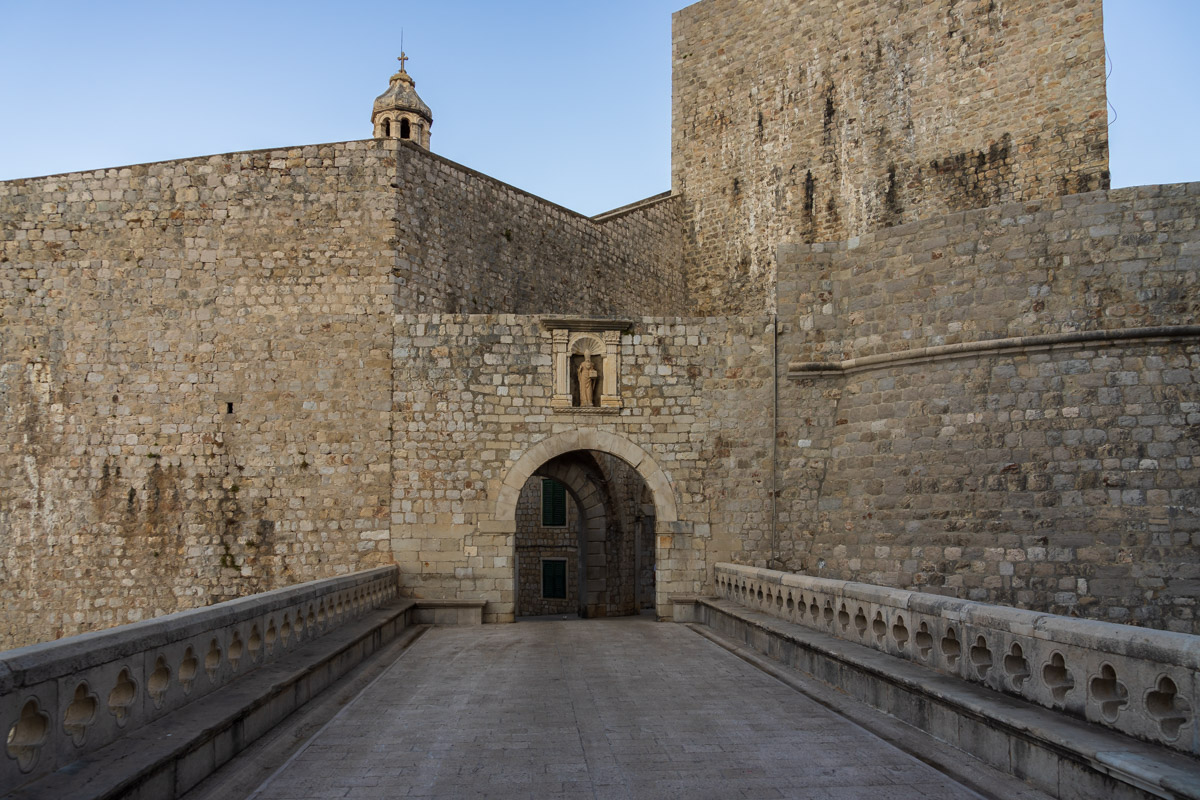 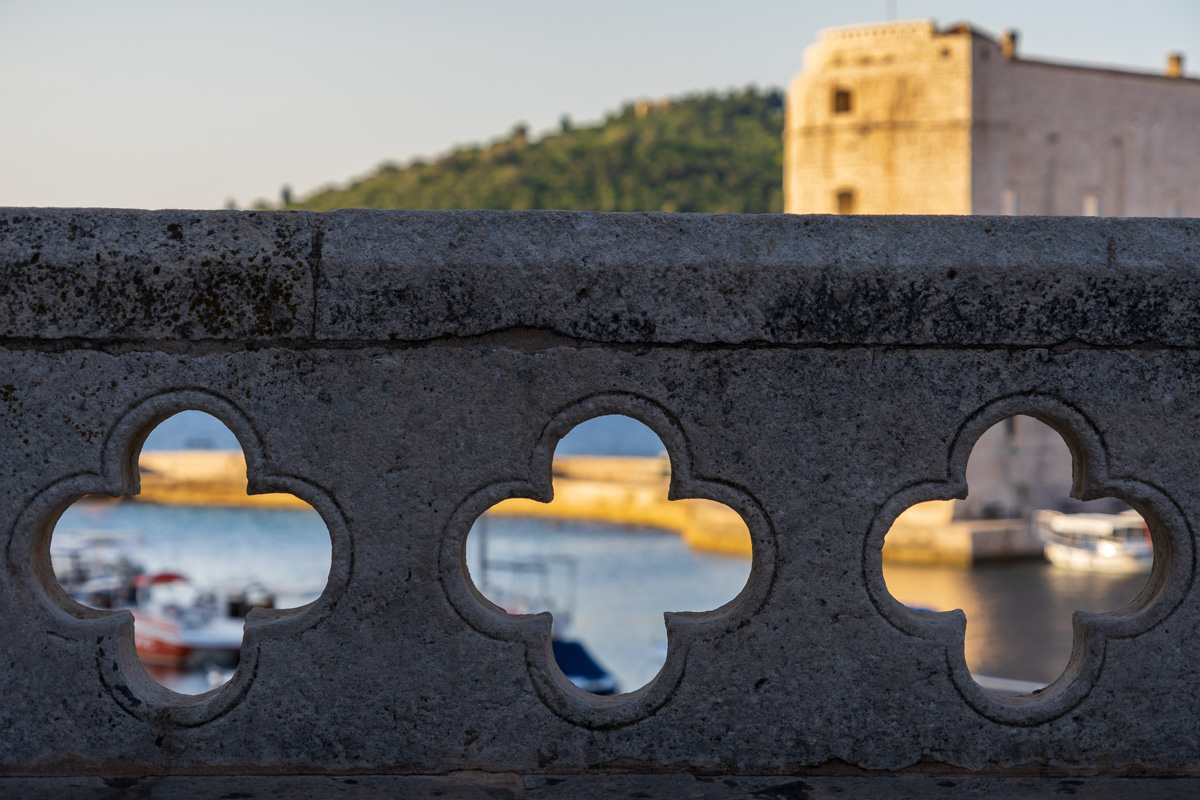 View of the marina in the rays of the rising sun. 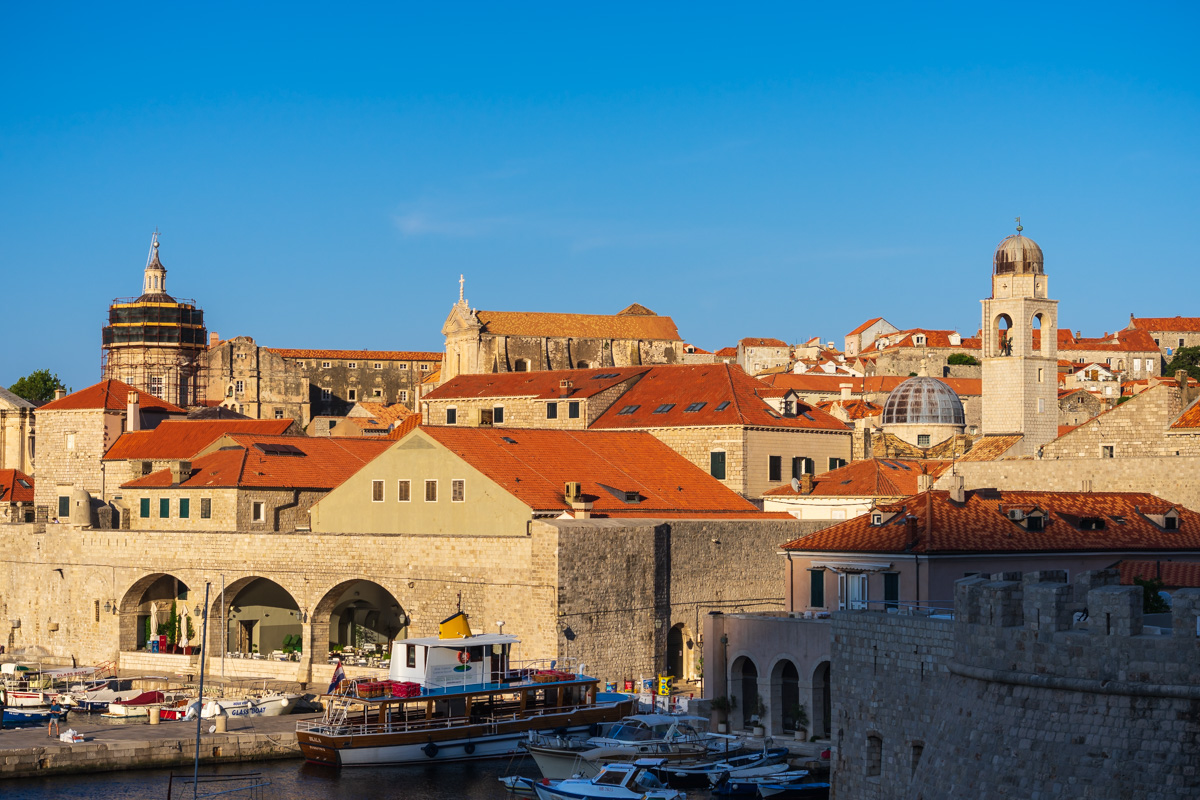 And another look along Stradun, this time towards the tower of the Franciscan Monastery. 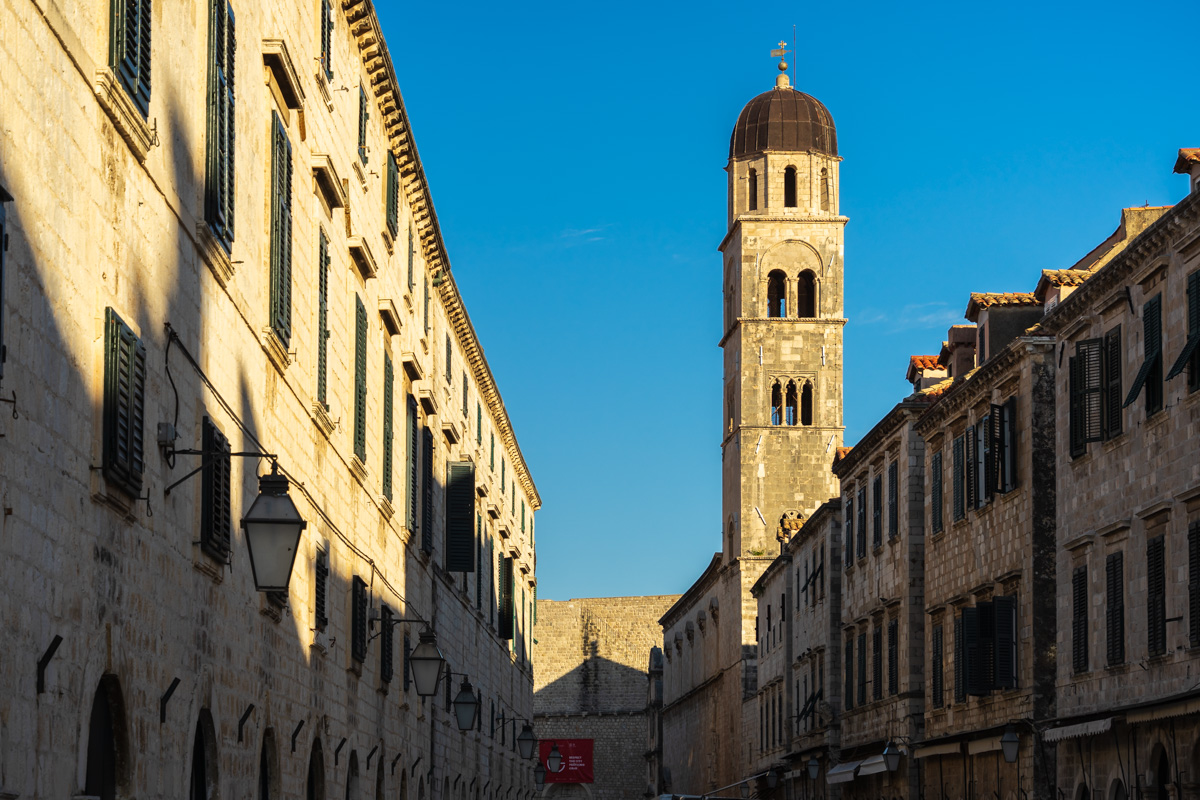 The last picture of this essay is not technically Dubrovnik but rather the coastline to the south of it.

The city definitely calls for a full day of exploration, but probably no more than a day. There are some activities on Mount Srd and, of course, beaches that would help you extend your stay in Dubrovnik. You can also visit the island of Lokrum by the city or Elafiti islands to the north of it that will require additional days. Us, we retained our base in an apartment not far from the city walls and went first on a road trip and then a boating trip on subsequent days. More on that anon.