My latest travel itineraries have been unapologetically influenced by the desire to visit as many World Heritage sites as I come near. In the instances of Portugal or the Dalmatian Coast, that aligned reasonably well with the notion of a typical first-time tour since the most popular and interesting destinations more likely than not happen to be part of WH list. Nonetheless, I occasionally make an opportunistic move for a place that would not feature on anyone’s but the most hardcore WH chaser’s radar.

Stećci Graveyards is a serial site spread across four Balkan countries. Their value is derived from the distinctive testimony to the culture of Southeastern Europe in Medieval times through the mix of local and pan-European religious funeral traditions. One of the best preserved of these cemeteries is conveniently located roughly on the way from Mostar to Dubrovnik, well signposted directly on the main road leading into the town of Stolac in Bosnia, so it was an easy decision to make a quick stop there.

Radimlja Necropolis is a collection of over 130 limestone slabs, sarcophagi, and crosses, of which over half is decorated. All of them date from late 15th – early 16th centuries, 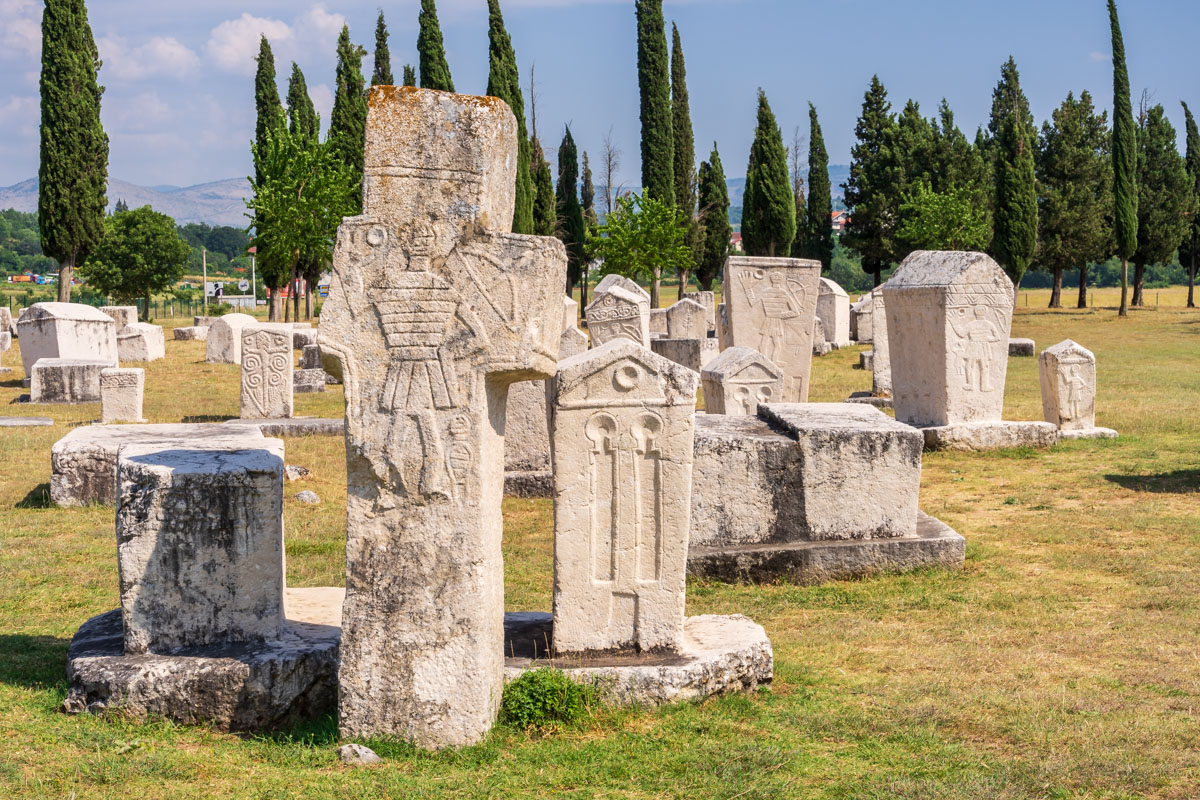 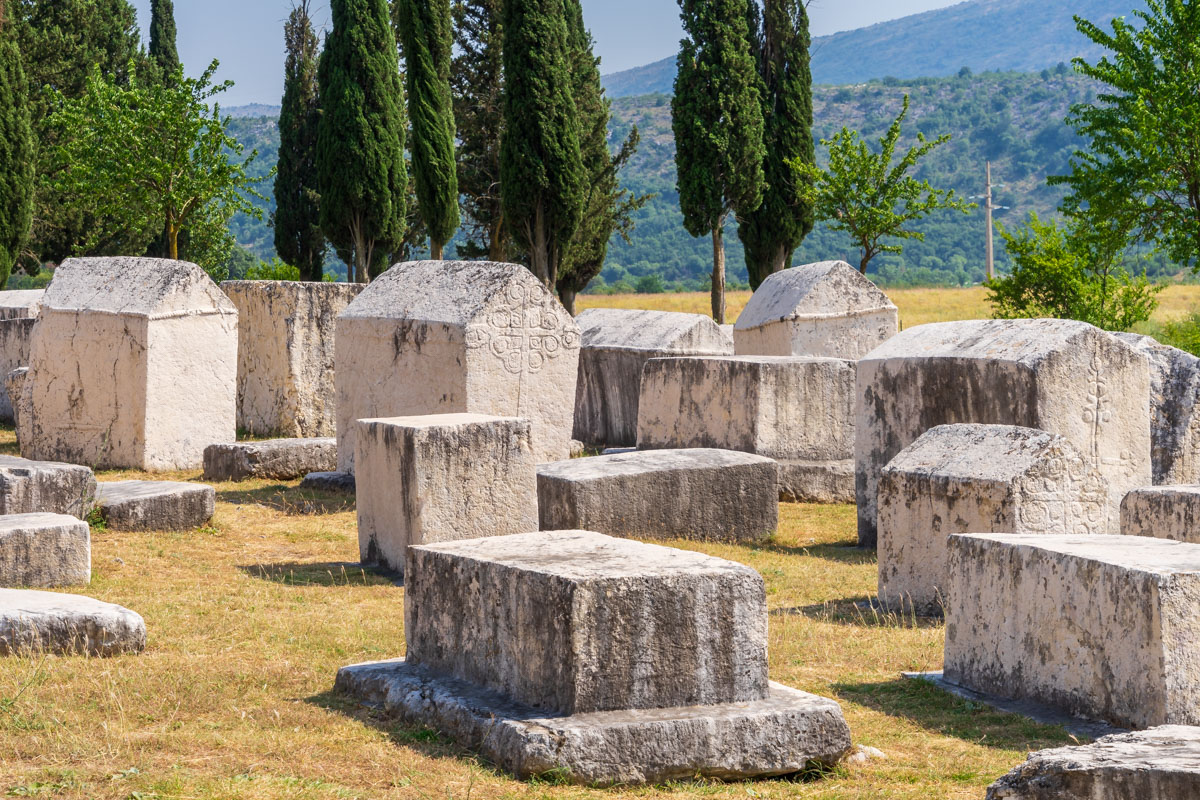 We were the only visitors on an early July afternoon. The two staff members at the visitor center were clearly excited that someone decided to stop by. Having paid a nominal fee for entrance, I got a 5-minute lecture from one of them on the origins of stećci tombstones and their place in local history. I declined the offer of a guided tour, and simply spent the next 10 or so minutes roaming around the field.

One of the most common decorations on the standing slabs is the figure of a man with a raised hand. 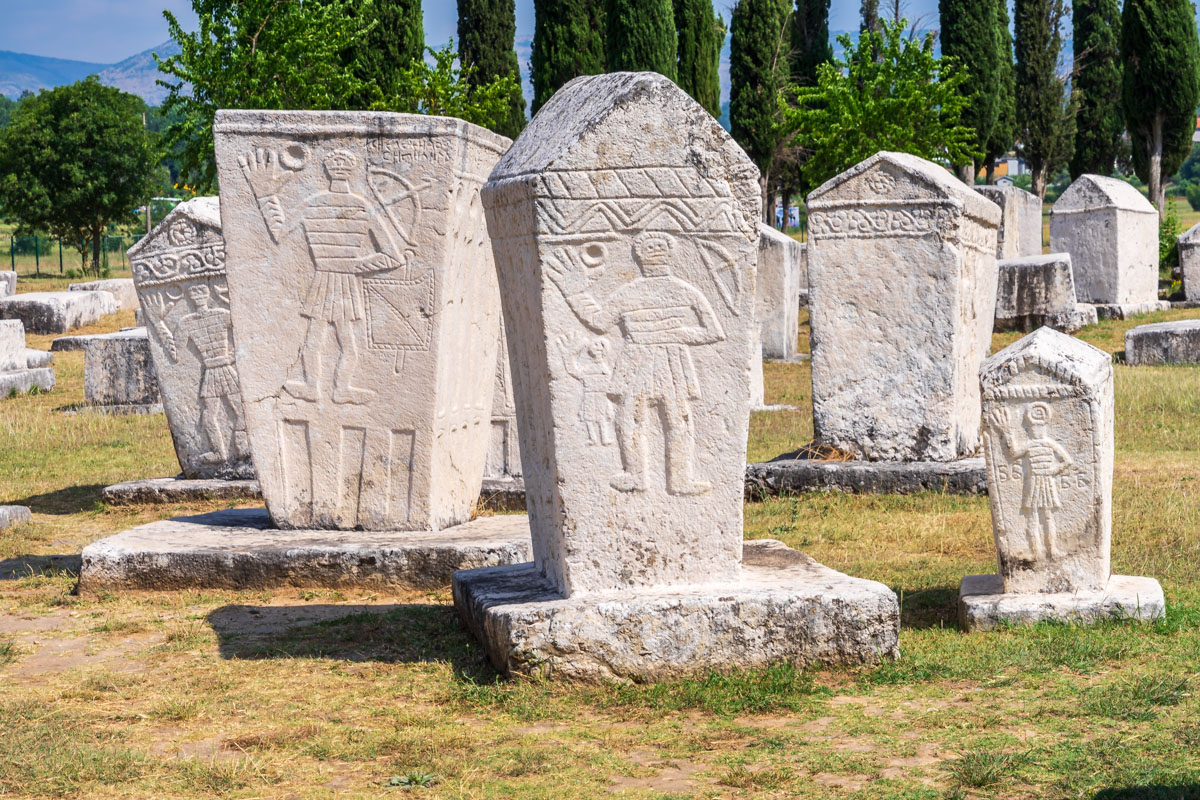 Surprisingly, it appears that there is no clear answer as to who or what this figure represents. It could be a local patron saint, or a venerated warrior chief, or a pagan spirit. Its hand might be raised in a gesture of greeting, or of fealty, or of warning. The girl at the visitor center was leaning towards a friendly spirit, but she said “we don’t really know”. Apparently, despite relative young age of these graveyards – Radimlja is younger than the printing press, for instance – there is no recorded evidence to definitively support any of the hypotheses.

Other decorations and motifs are present on the tombstones throughout the site. 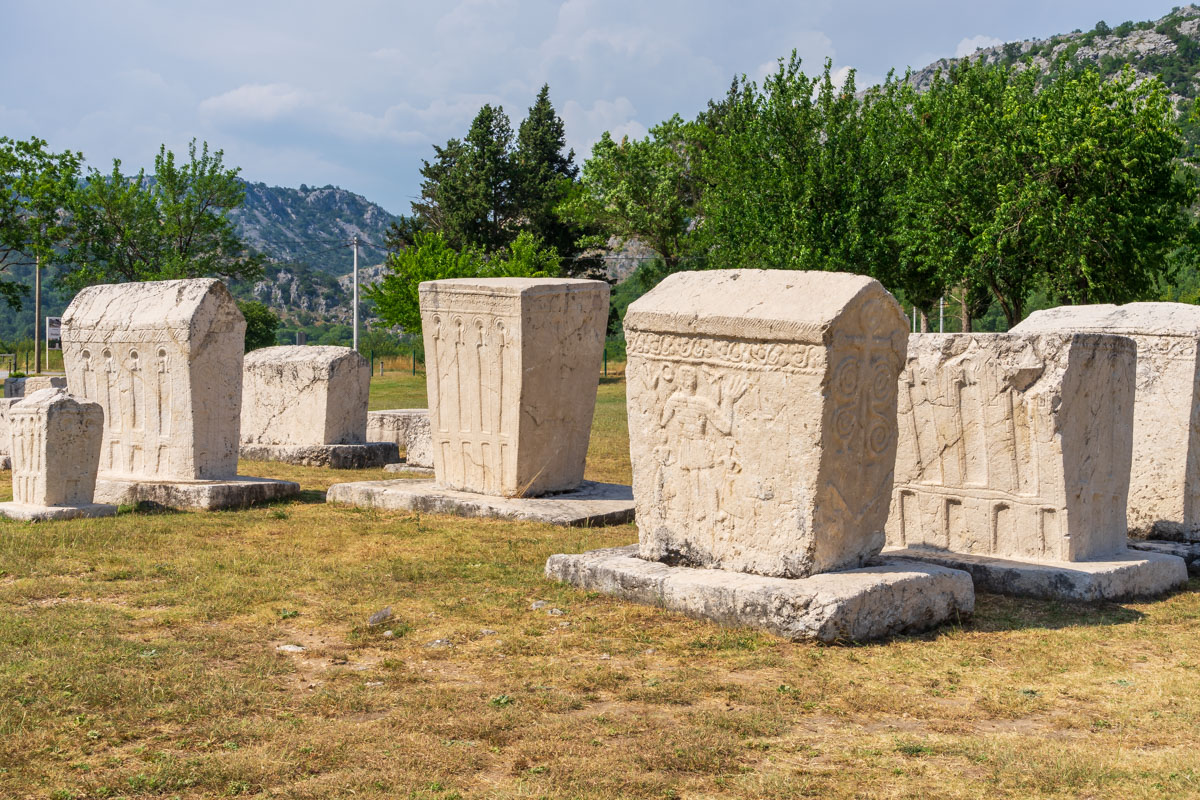 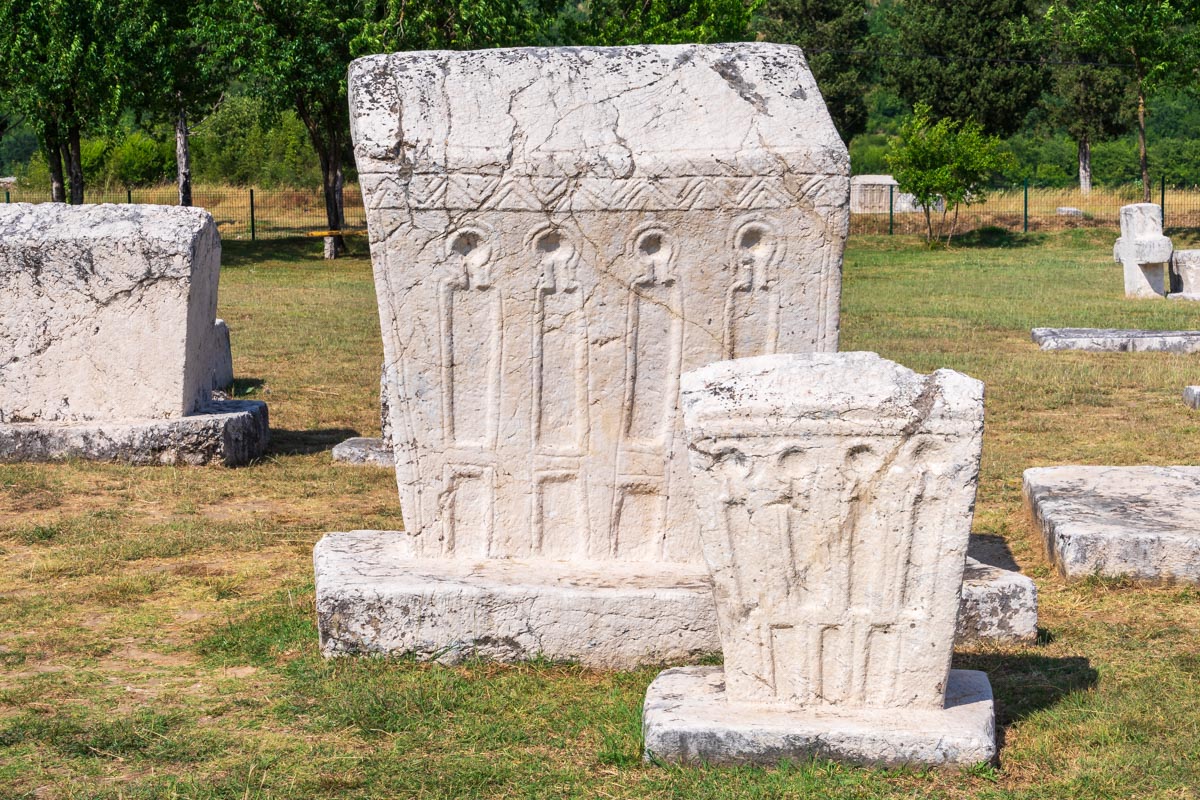 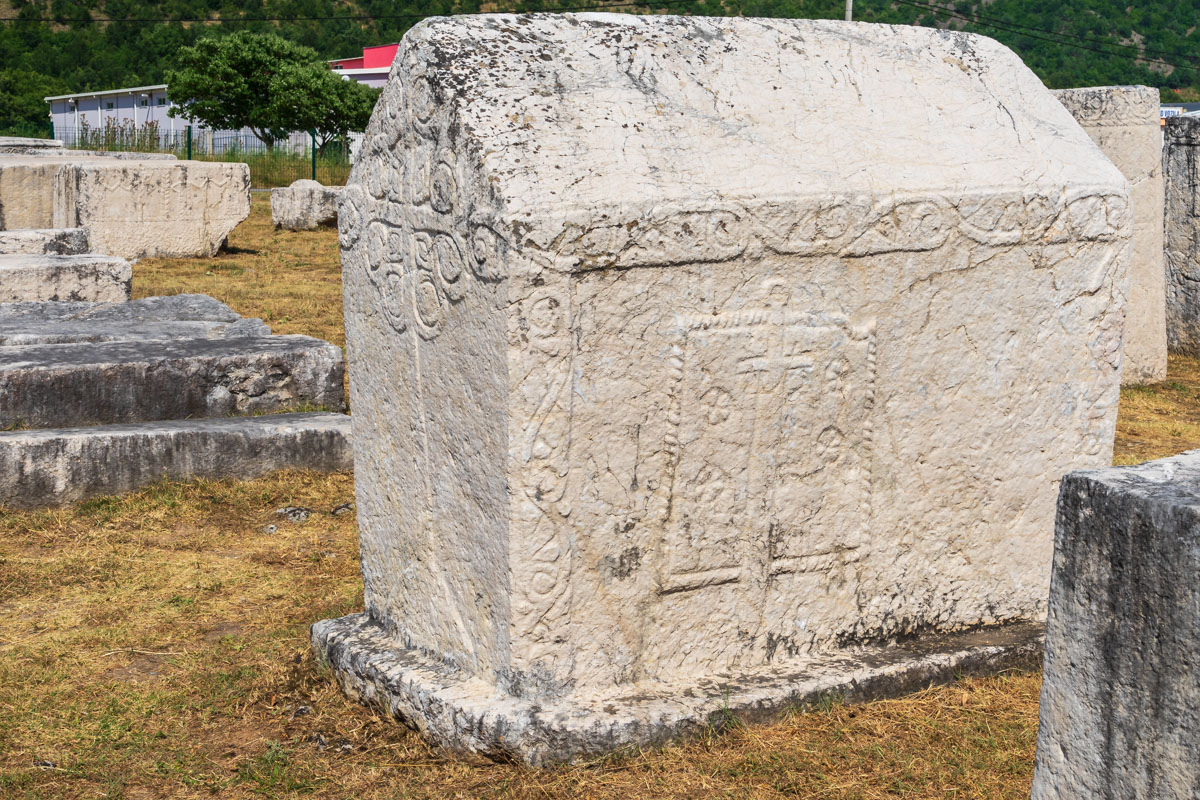 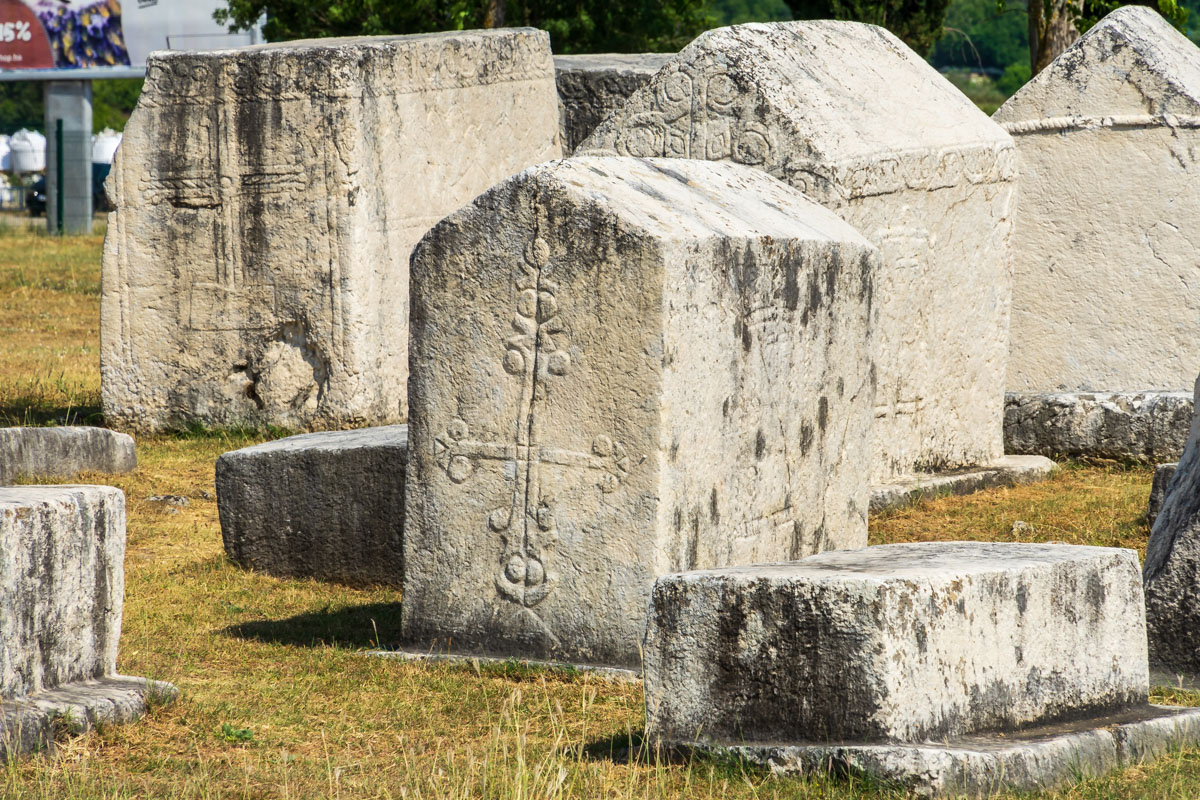 After I had taken what I thought were enough pictures, we ordered coffee at the same visitor center counter, sat down for a couple of minutes at the outdoors “café” area by the entrance, and were on our way again. The whole stop took under half an hour.

Another stećci site, Boljuni, is located 15 minutes out of Stolac still roughly in the Dubrovnik direction. There are a couple of small road signs announcing it, but it is sufficiently situated in the middle of nowhere to require a careful GPS assistance to get to. The adjoining tiny village did not look lively to any degree; a couple of locals that we saw were clearly amused by the appearance of tourists. The necropolis – there are actually two separate graveyards a few hundred feet from each other – has no visitor center, no staff, and the fences around the sites have no locks. The clearly neglected look adds a measure of authenticity but the carvings are few and barely visible. The Outstanding Universal Value – OUV, the abstract gauge used to form basis of World Heritage inscriptions – is hard to discern here. 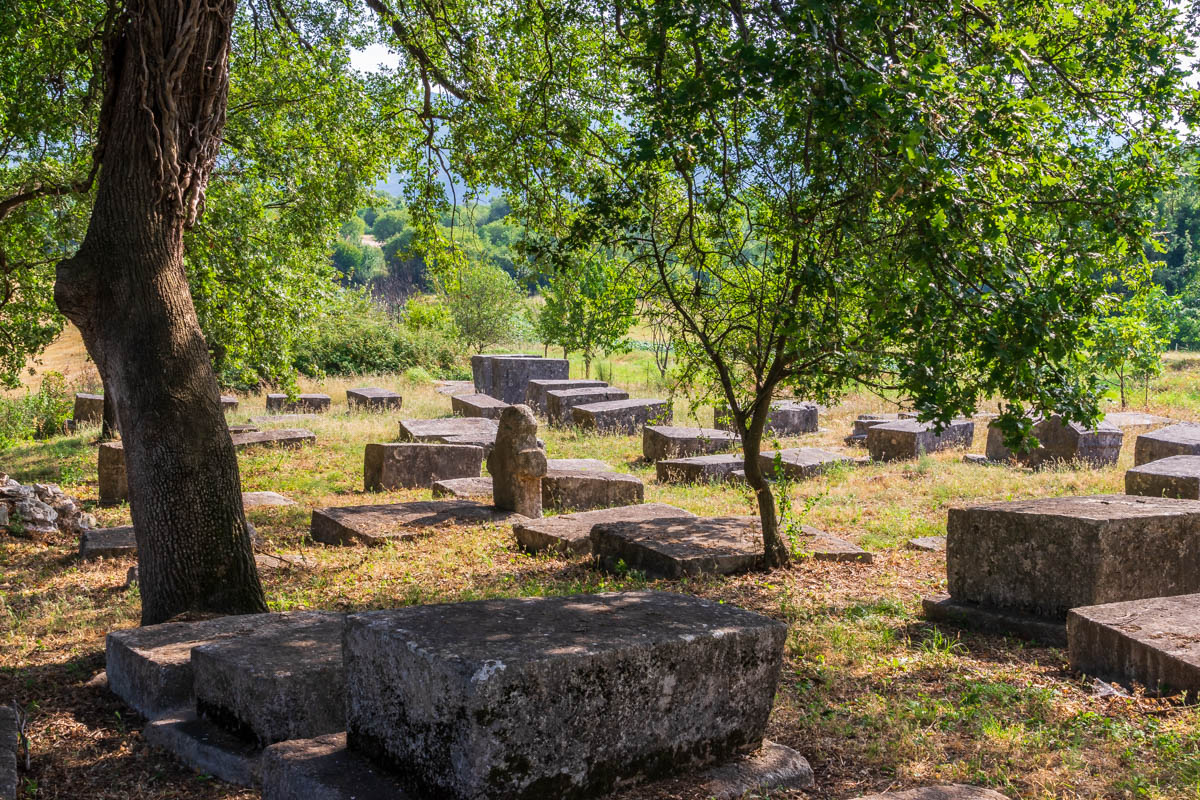 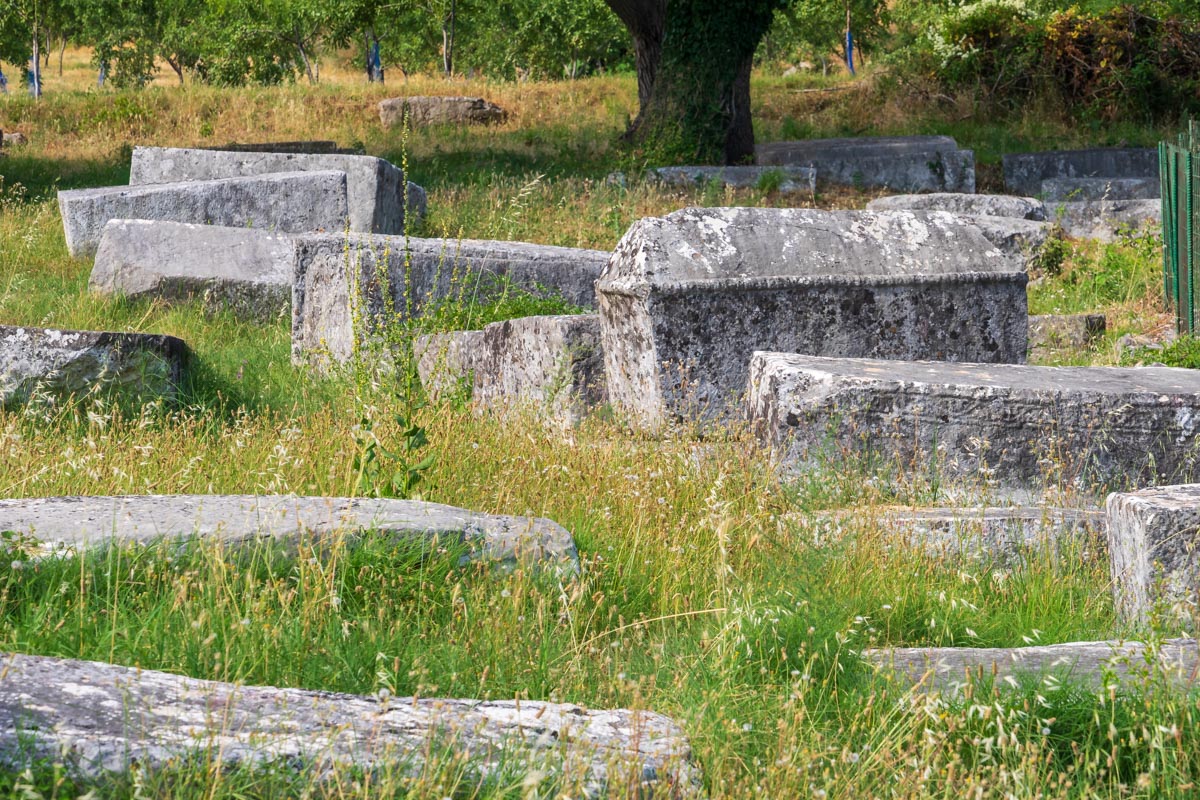 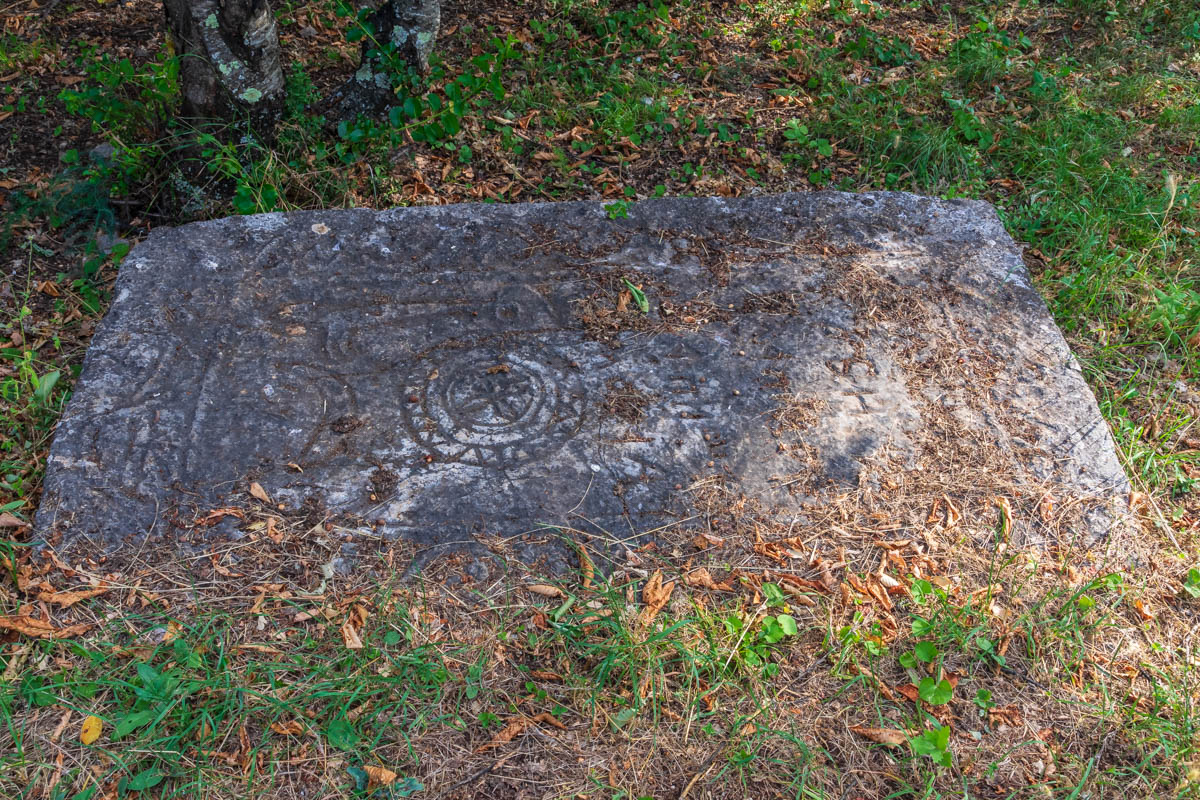 The view from Boljuni Necropolis towards the contemporary local cemetery. 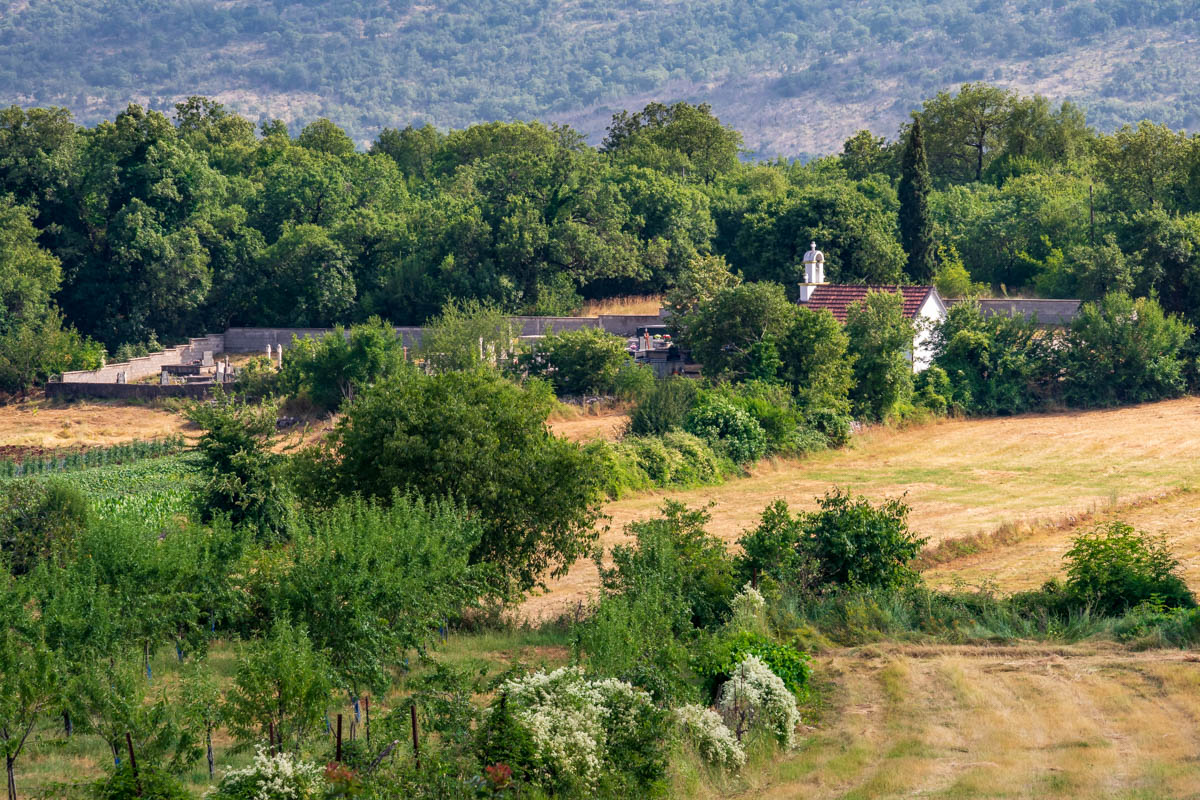 In between the two stećci sites, we made a short stop in Stolac proper. Curiously, it has its own entry on the tentative list for WH inscription comprising of a number of sights in and around town, including both of the aforementioned stećci. One of the sights is the Inat Ćuprija bridge, from where we took a few pictures, with the nearby mosque of Hadži Alije Hadžisalihović providing a visual highlight. 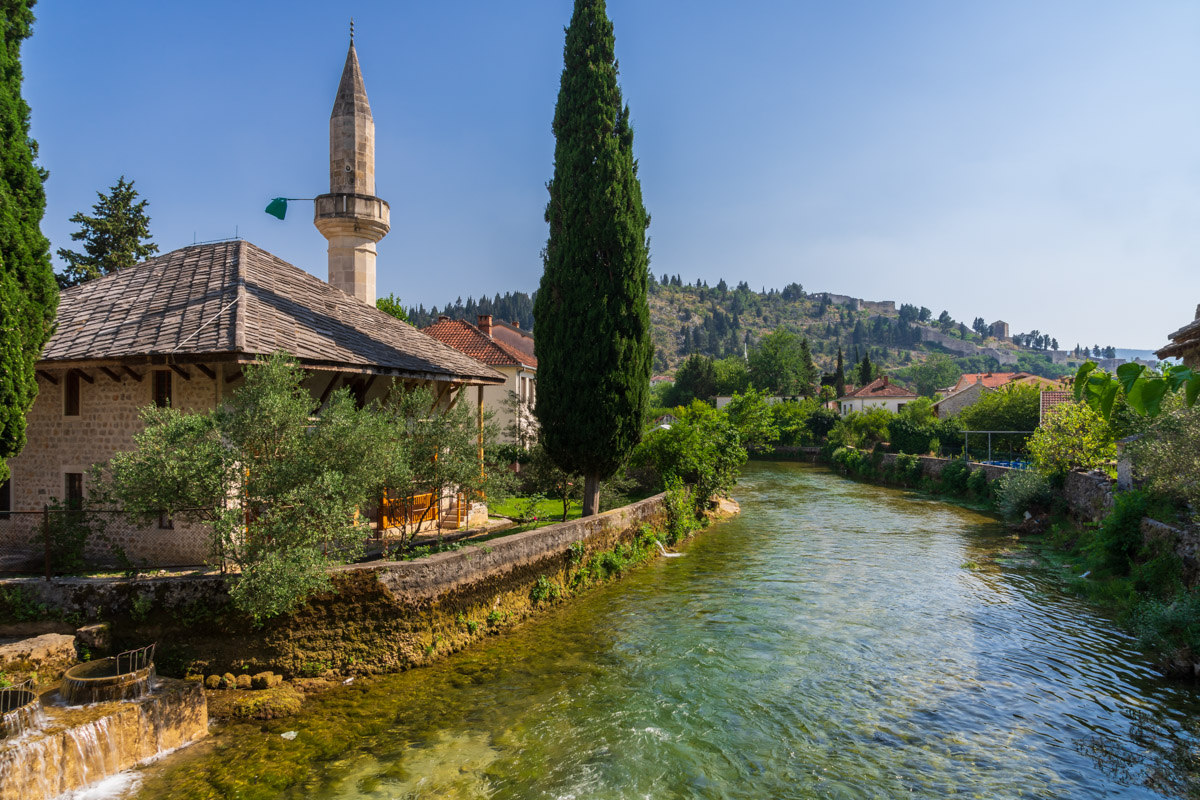 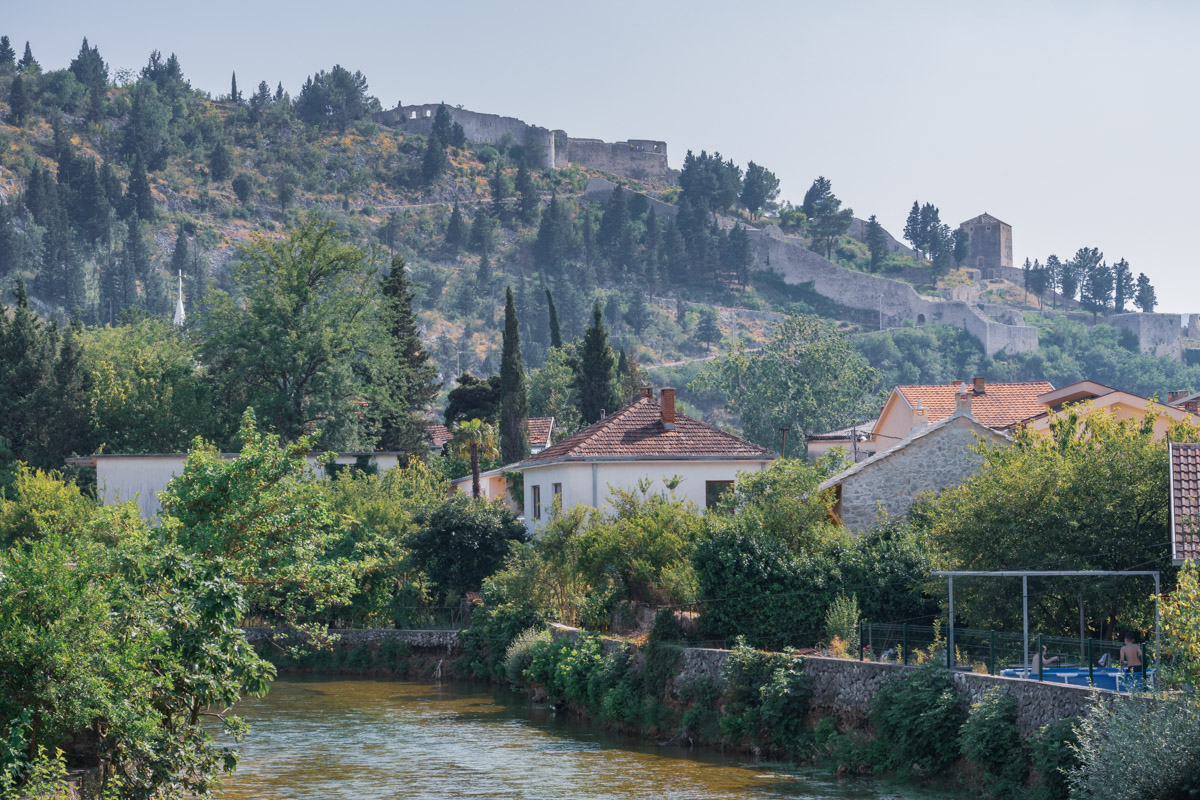 High above modern Stolac are the ruins of the walled Old Town, which we only looked at from distance. 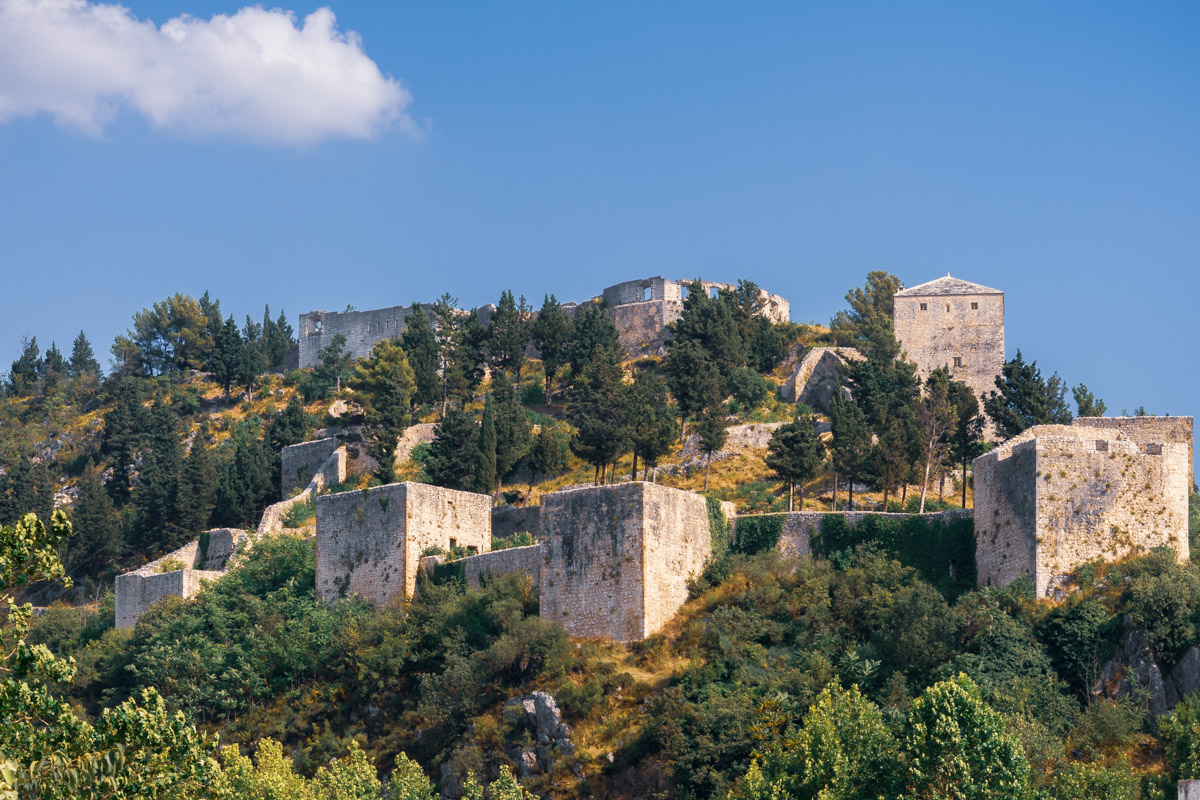 Leaving the Stolac area and setting our sights on Dubrovnik led us on a fun – used here more in the sense of crazy – drive on Bosnian mountain roads. While there is certainly no recommendations for future visitors from this part of our trip, it was overall a pretty interesting follow-up to the time spent in Mostar.