In a not widely known quirk of geography, a tiny sliver of the Dalmatian Coast belongs to Bosnia and Herzegovina, making it impossible to travel by land between Split and Dubrovnik without entering and then quickly exiting Bosnian territory. The border checks are comparatively relaxed on this stretch, never creating holdups of the kind that take place on the Croatian/Montenegrin border (more on which in the future). You can technically avoid them and stay entirely within Croatia by incorporating a ferry crossing into your route – that will likely add several hours to your overall trip, workable only for people with specific interest in spending time on Pelješac Peninsula.

What does that bit of trivia have to do with our next destination? Nothing, really. If not for the infamous flight cancellation that was resolved by flying into Dubrovnik instead of Split – and then immediately driving to Split – at the beginning of our Croatian trip, we would never find ourselves at those coastal crossings. Our planned route from Split to Dubrovnik at the end of the first half of the itinerary always included a significant detour into the Bosnian heartland to visit the town of Mostar.

In a sense, Mostar left the most vivid impression for me from the entire trip. I have not yet been on my travels to a town where mosques and minarets are the most eye-catching features (although I plan to significantly repair that gap before the end of the year), let alone when they are mixed with very recognizable European architectural features. Mostar is inscribed on the World Heritage list specifically as a great example of a multicultural town where proverbially the East meets the West.

The Old Bridge – Stari Most – which gave the town its name, is the defining symbol of Mostar. 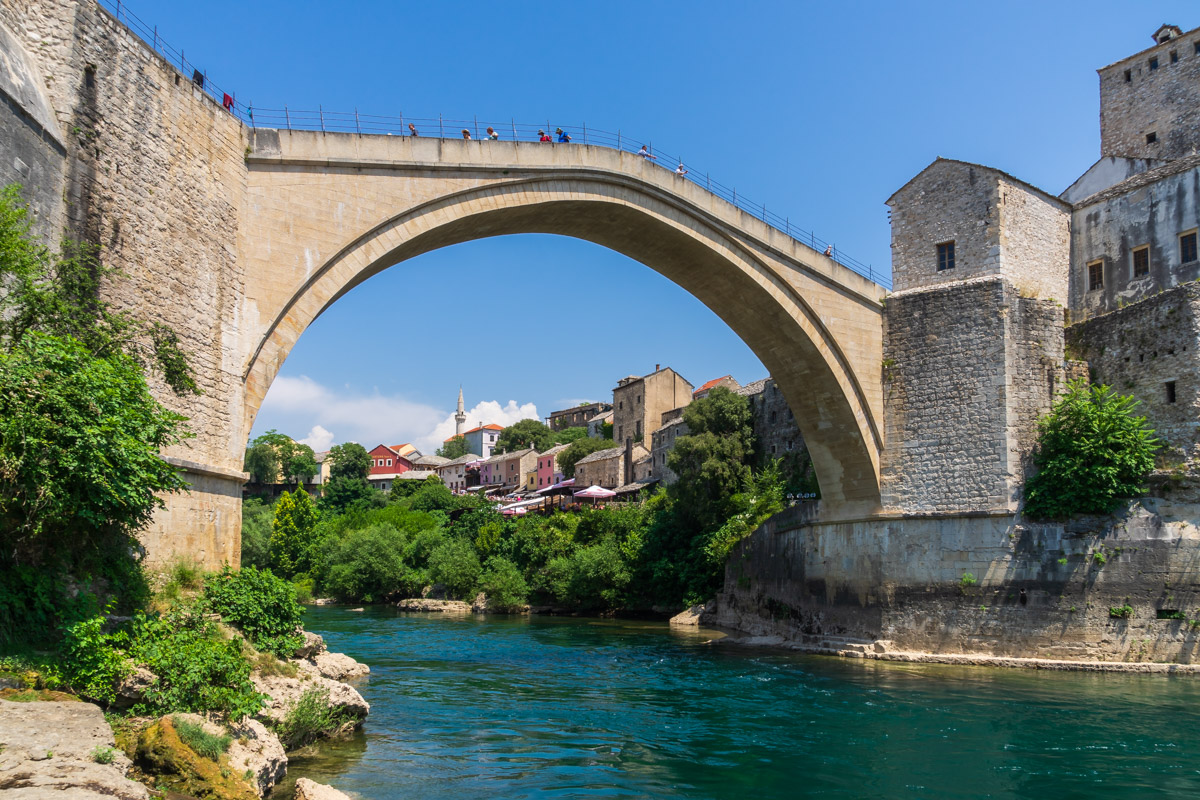 The bridge was destroyed during the Balkan conflicts in the 90’s, and rebuilt in 2004.

Every half an hour or so, a jumper plunges off the bridge into the river Neretva. I failed to discern the point of this performance, given that no donations to the jumper are seemingly ever being collected, but the crowds on the bridge get the thickest in the last few minutes before a jump. 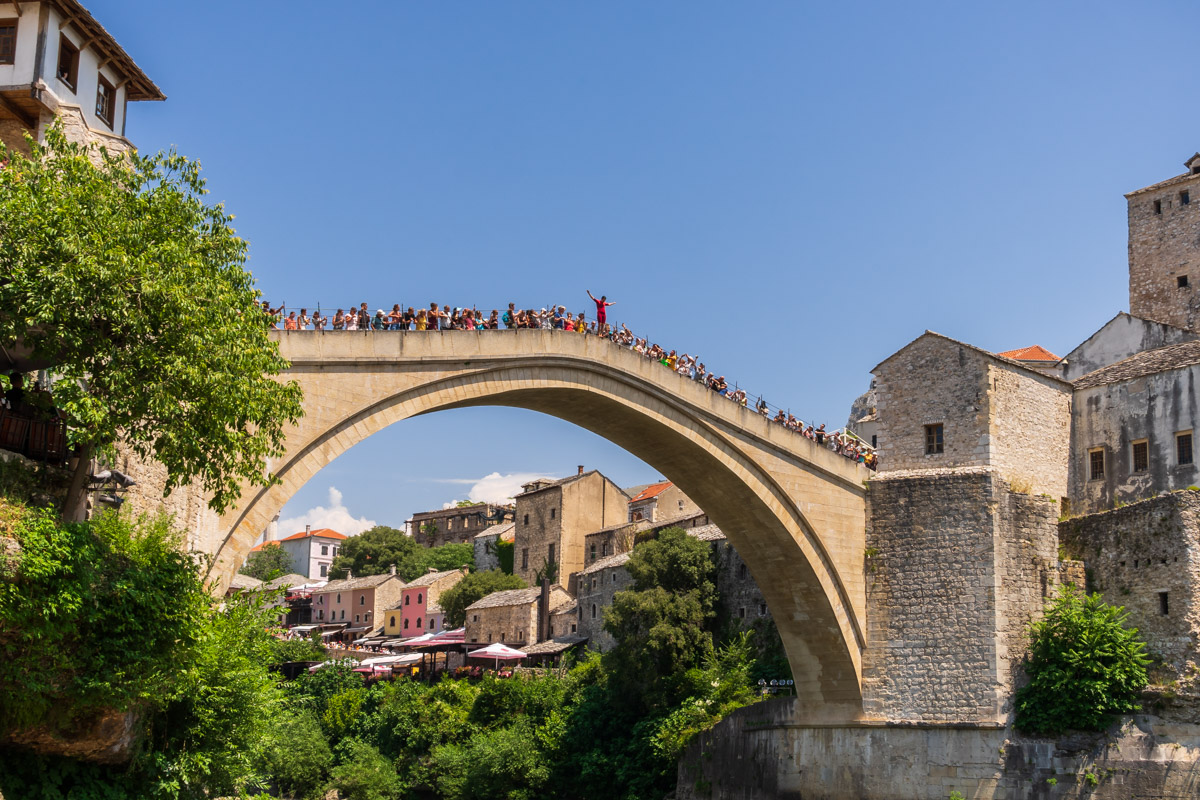 Not only the Old Bridge but the entire central Mostar was heavily destroyed during the conflicts. It has been since largely rebuilt, but remnants of destruction show up even in the most loveliest of perspectives. 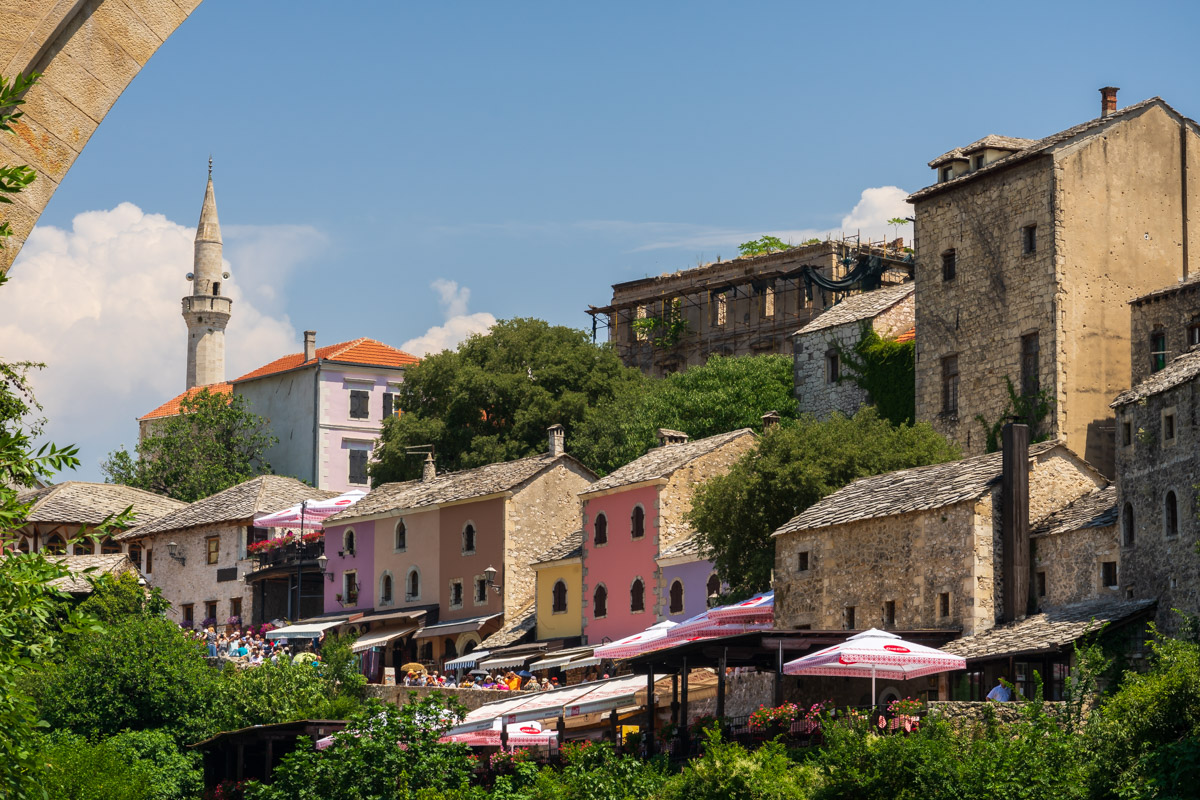 Another angle onto the bridge from a high terrace on the right bank. 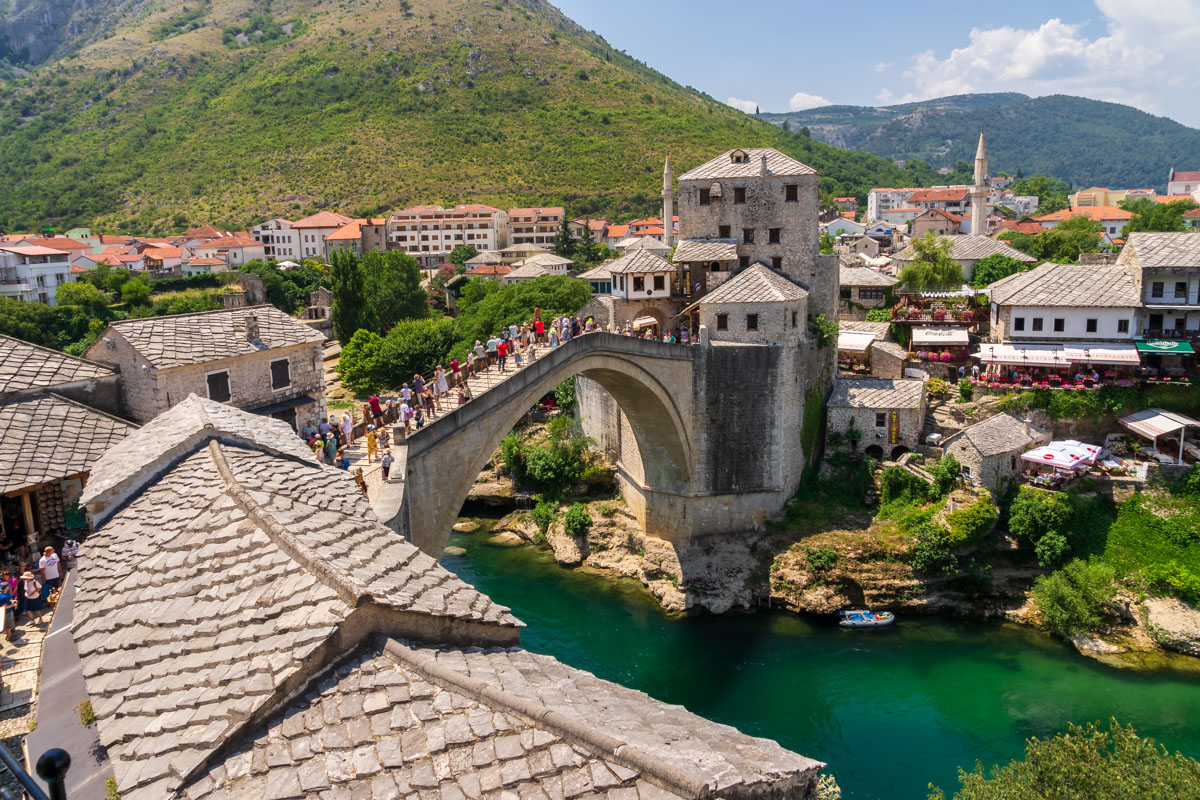 And a close-up that well illustrates the crowds near the time of an upcoming jump. 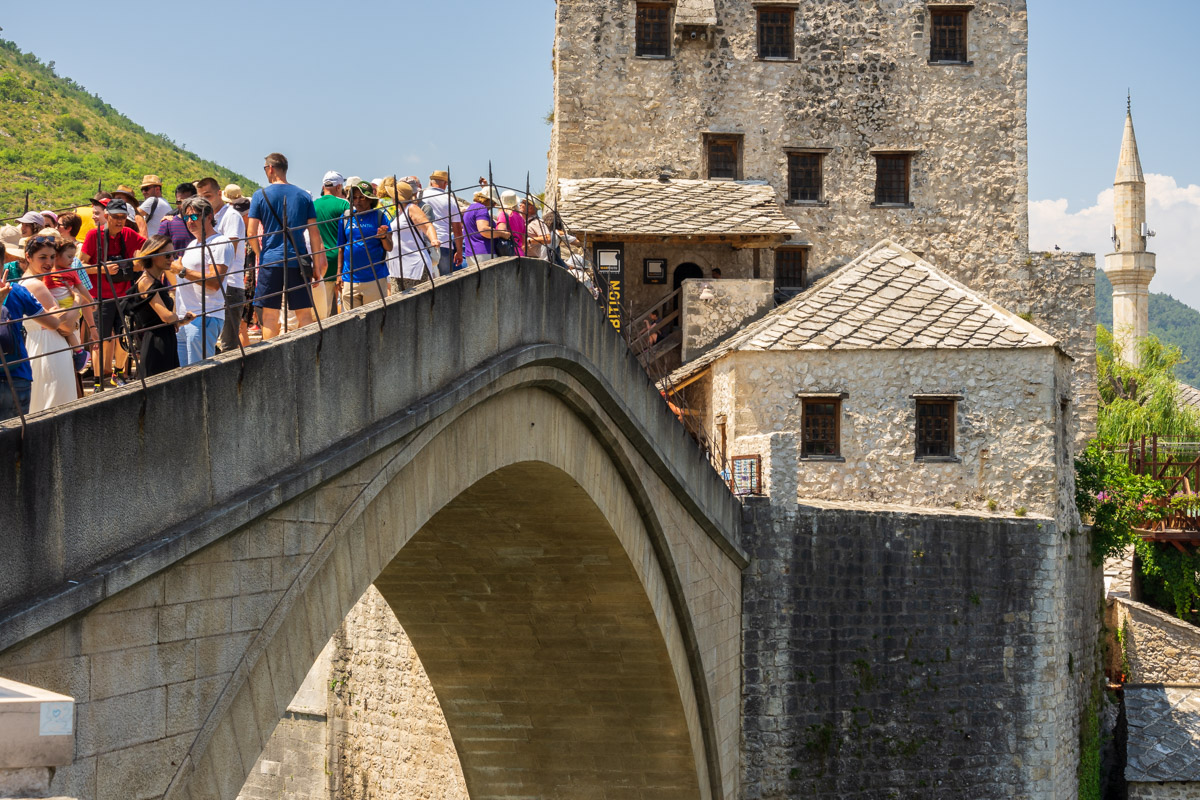 A view from the bridge towards the mountains, with the Mosque of Koski Mehmed Pasha as the main feature. 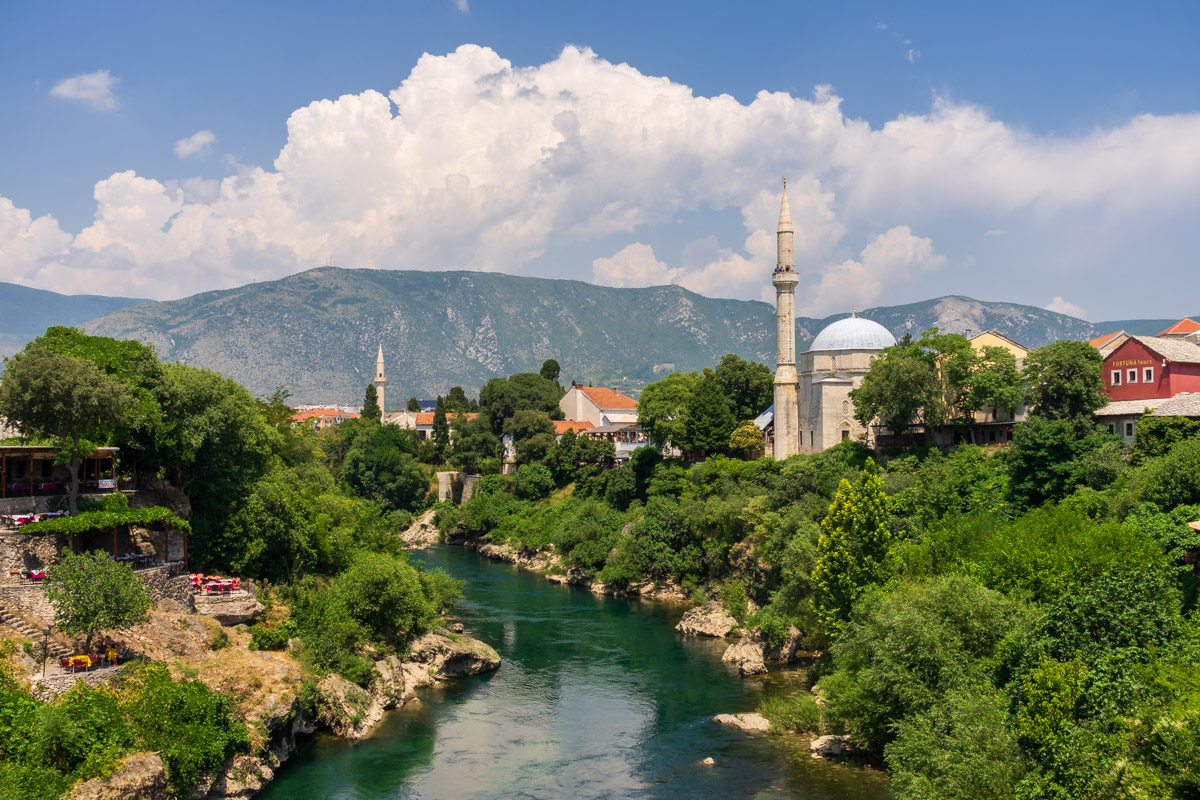 The mosque is in reality a single space with some lovely decorative elements. 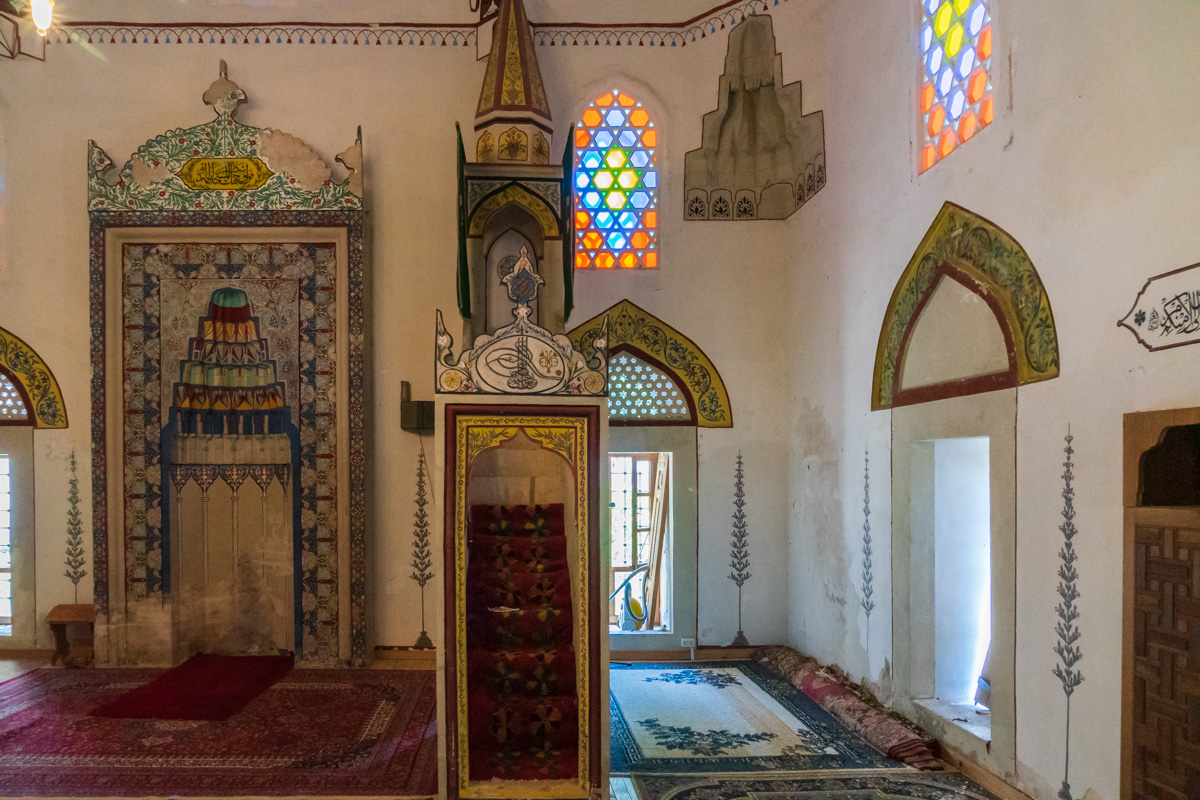 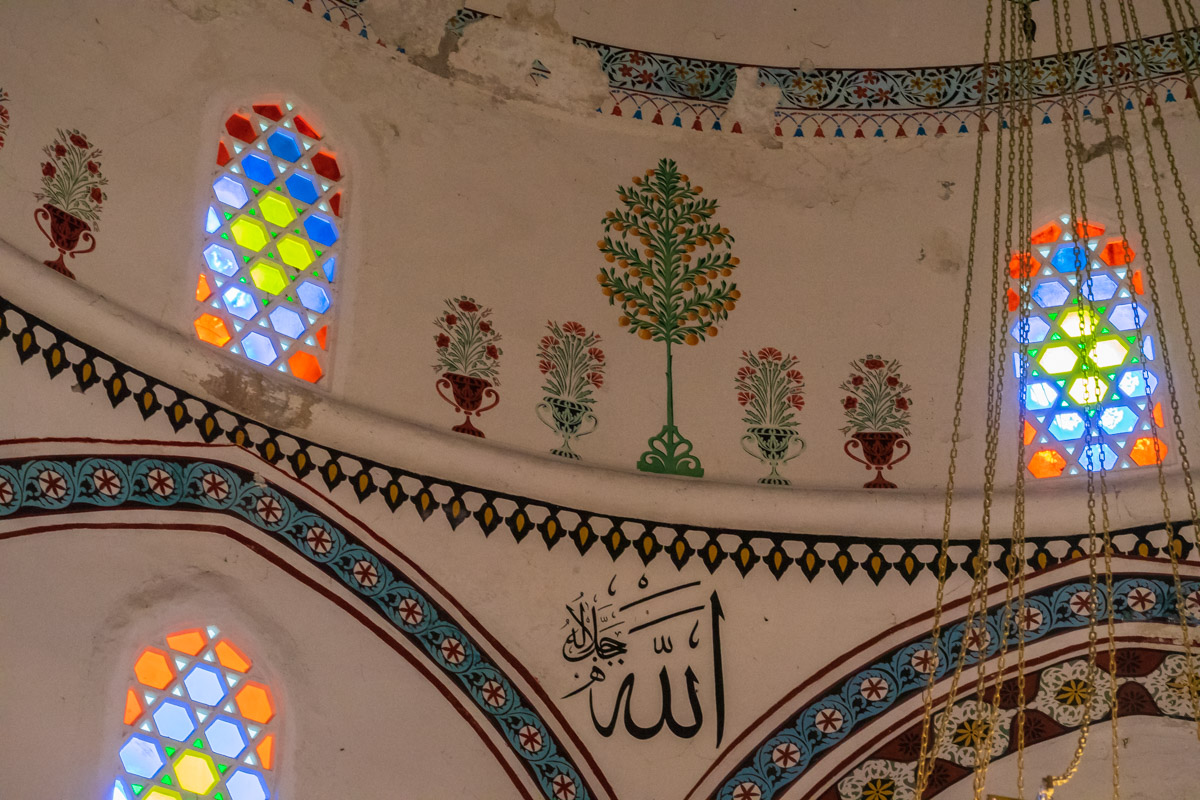 The female visitors to the mosque are required to cover their shoulders and knees, but if you pay an entrance fee you do not have to remove your shoes. Furthermore, tourists are allowed in even during the prayers – and photography is only restricted with the usual “no-flash” directive. I have to admit that the novelty of being inside the mosque during prayers overcame my usual discomfort of pointing my camera at people. 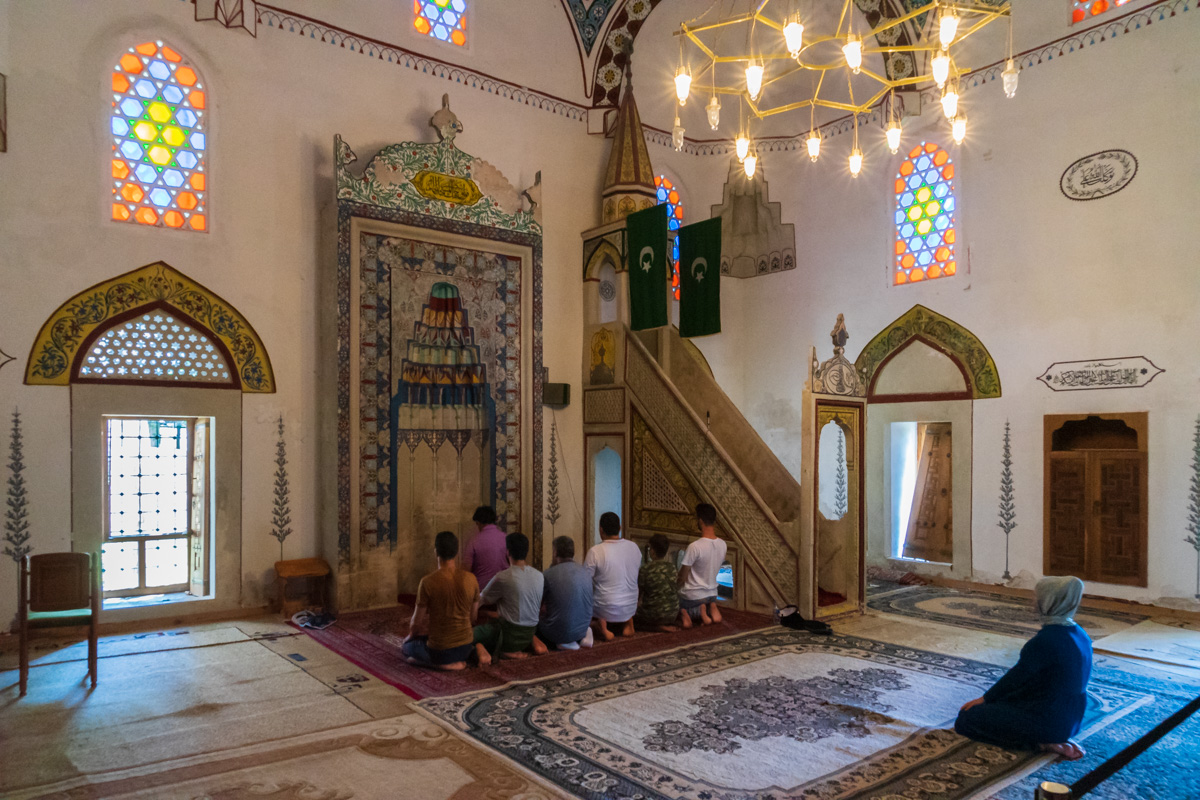 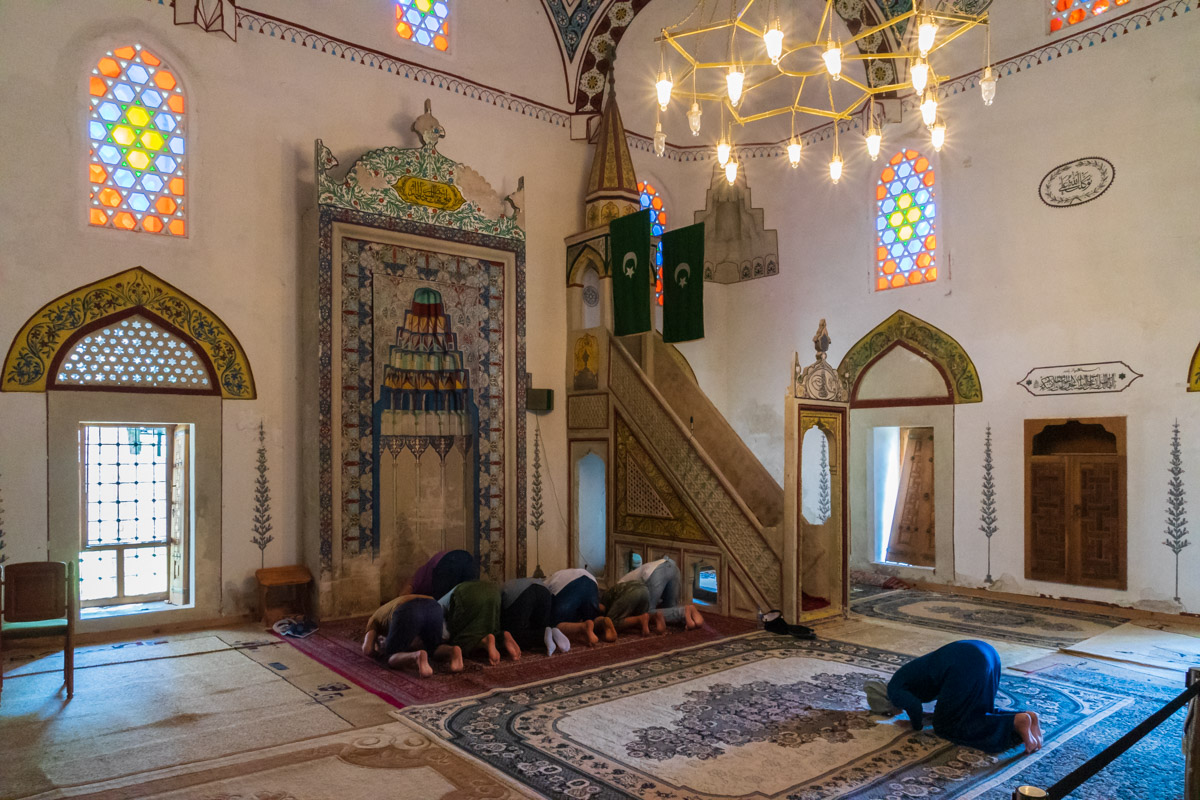 We also climbed up the minaret for the million-dollar view of the city.

The traditional washing fountain in the mosque’s courtyard. Included here as another illustration of the number of visitors in town at midday as well as the fact that tourist-oriented souq spills out to all open spaces in central Mostar. 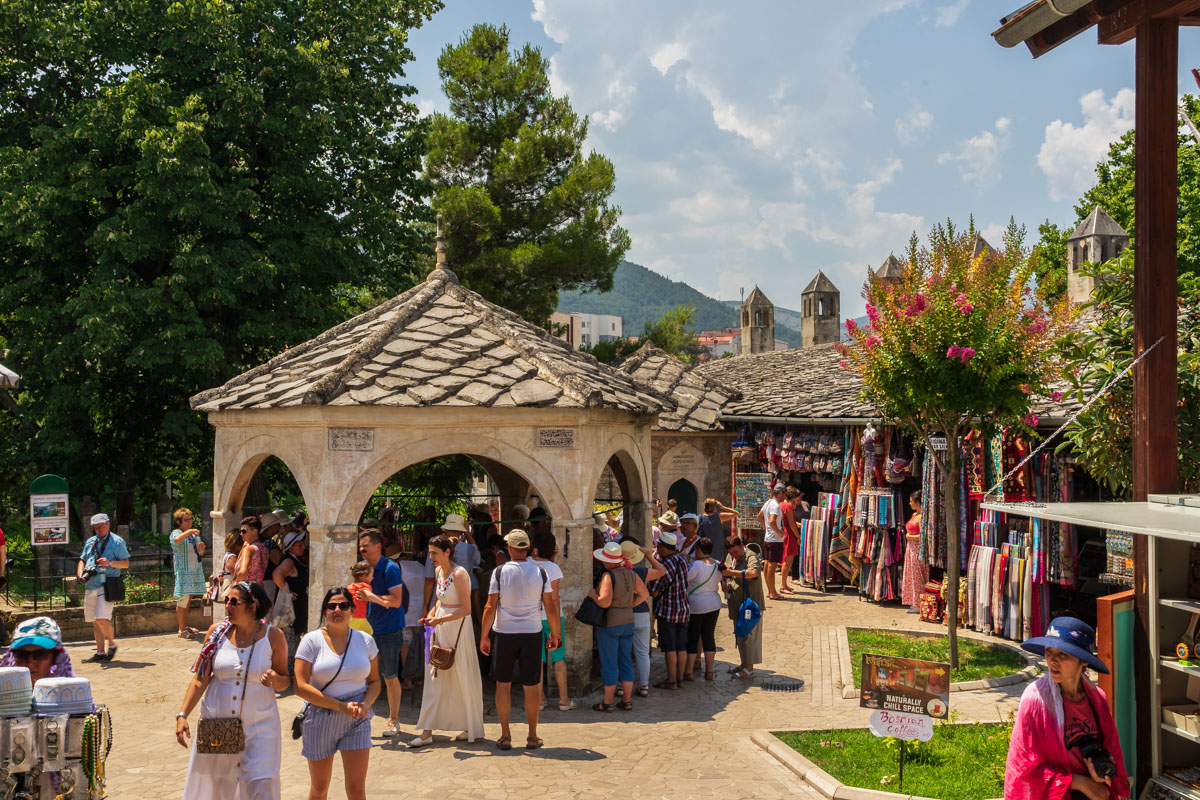 A few more perspectives of the colorful right bank of the river. 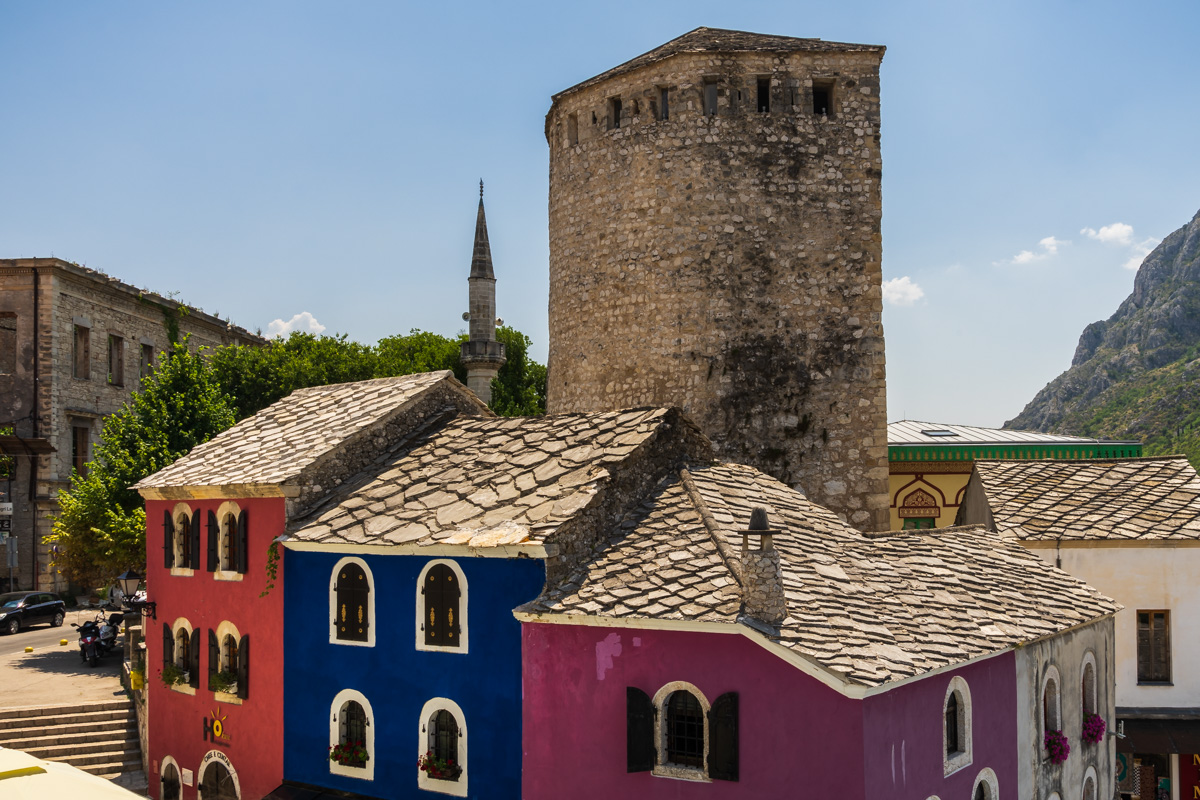 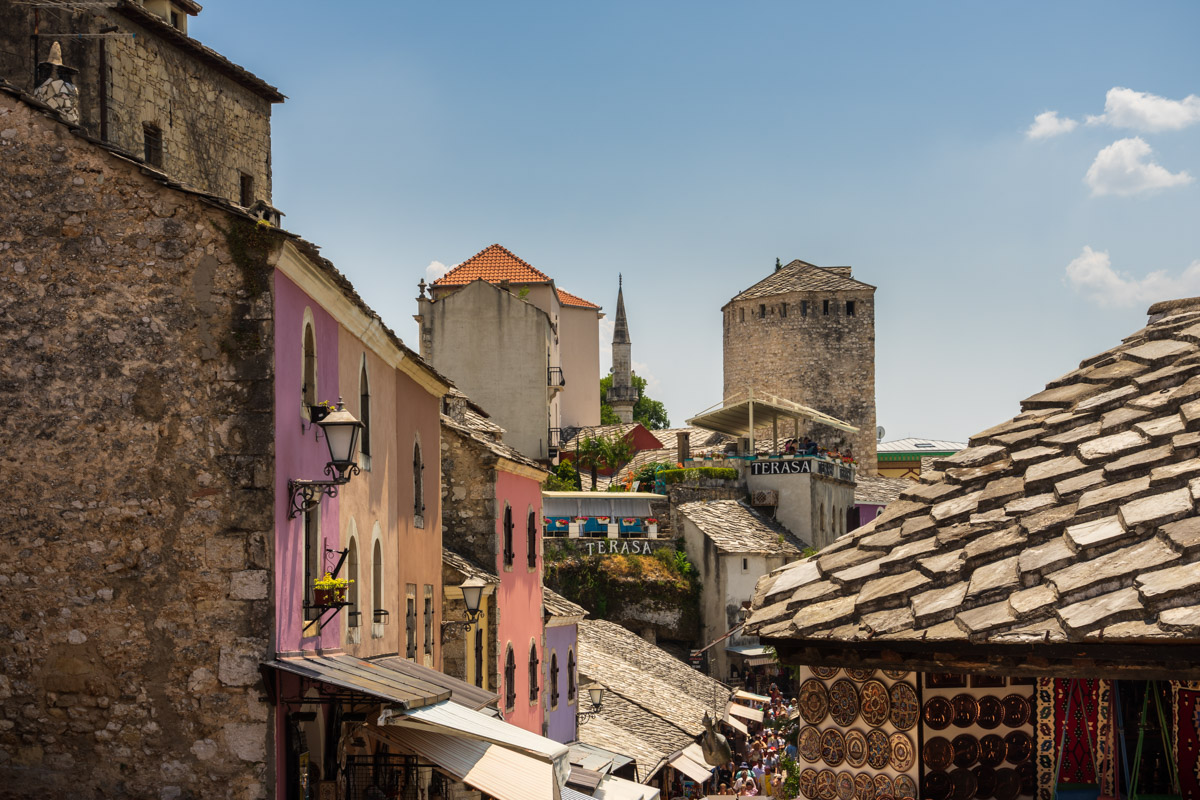 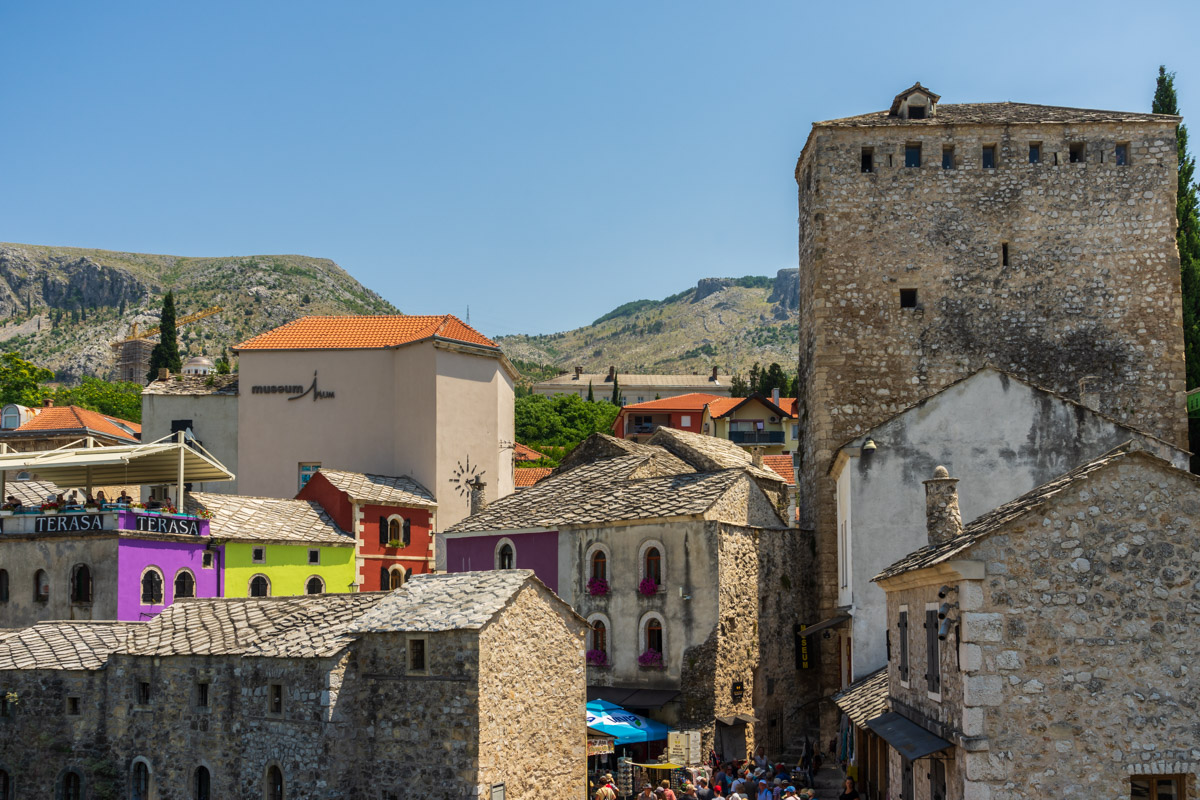 And a small but poignant reminder of the wars – words “Don’t forget” appear in many places on the streets of Mostar. 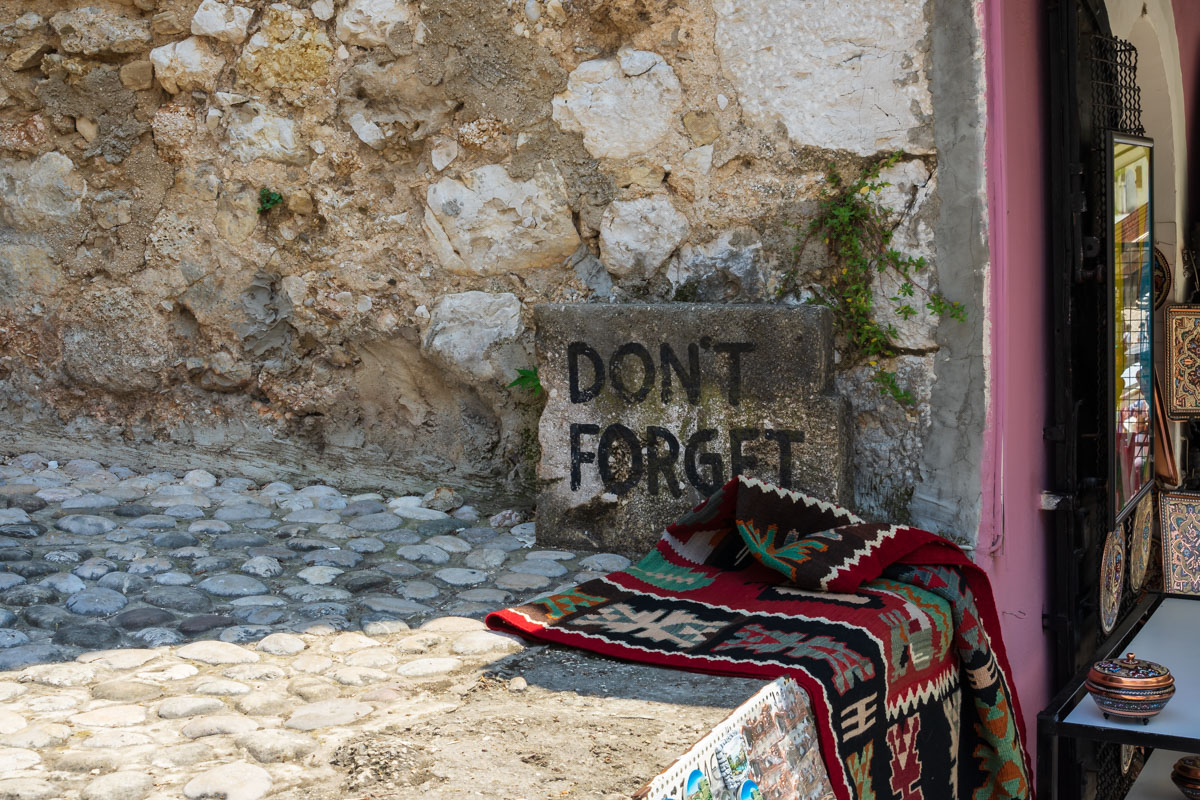 Mostar can be reached in about 3 hours from Split (accounting for delays at the border – the procedure is surprisingly more stringent on the Croatian side than Bosnian one, even for departing vehicles), by car or with an organized tour. We spent a bit over 3 hours in town, including sitting down for lunch and for refreshments. Sightseeing could be extended to a number of historic Turkish houses and a couple of small museums, making Mostar a reasonable half a day destination.