While in Croatia, we technically only explored sights on the Dalmatian Coast. This historic region today encompasses counties with seats in Split, Dubrovnik, Šibenik, and Zadar, all of which featured on our itinerary. The latter is the northernmost of great Dalmatian towns.

Wait a second!, says an attentive follower of my travels. The title of this post does not refer to counting World Heritage sites. Is it possible that you prioritized seeing a place that does not hold the WH recognition?

Ah, but Zadar is on the World Heritage list. Or, rather, its fortifications are, part of the Venetian Works of Defense serial site that I already count as visited since I spent time in Bergamo last year. Thus, the absence of WH verbiage in the title of this post simply reflects the fact that visiting Zadar did not increment my WH count. In any case, despite outward appearances, I am not completely single-minded about prioritizing the count, and Zadar is worth a visit regardless of formal recognition.

The most impressive part of the aforementioned fortifications is the first structure greeting the visitors arriving to the historic part of the city by land. Appropriately, it is called the Land Gate. 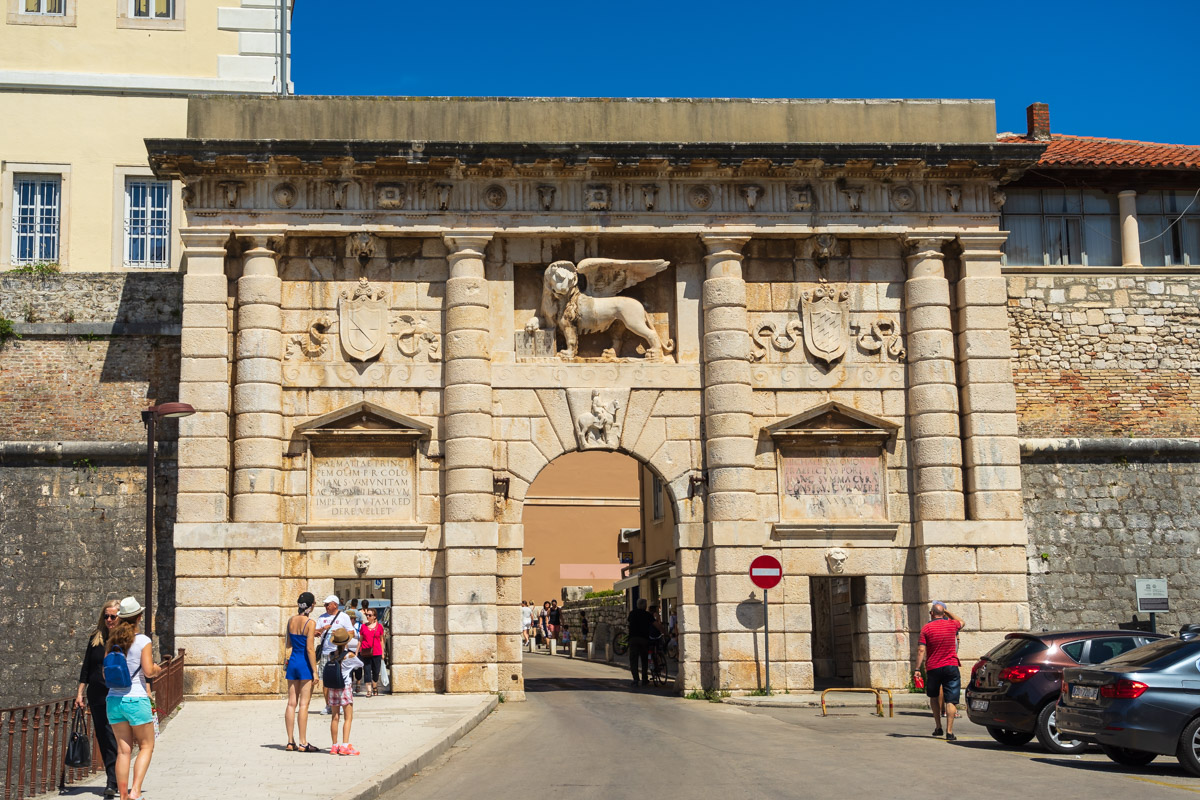 The winged lion removes any doubt, if one ever existed, about who built the walls and the gate.

A fragment of fortifications is also seen in this perspective, at the picturesque inlet of Foša. 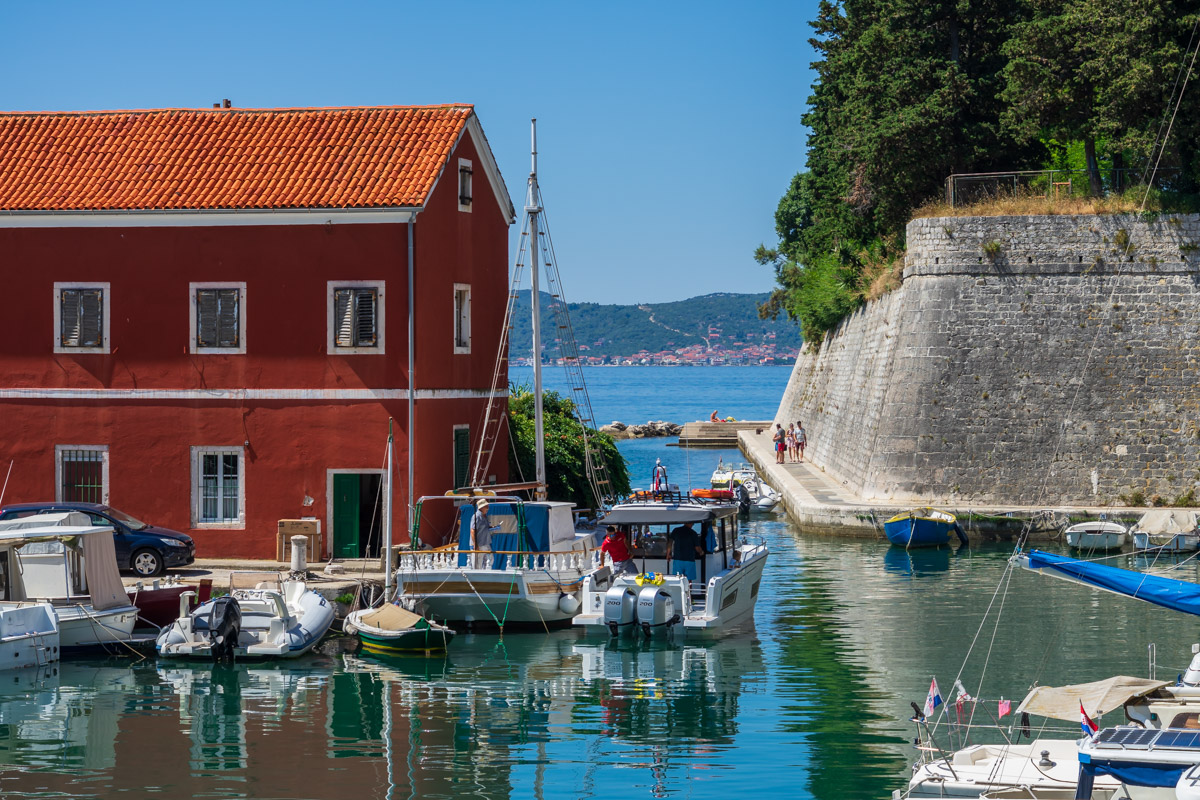 A shot from inside the walled city onto one of the smaller gates opening to the main marina. 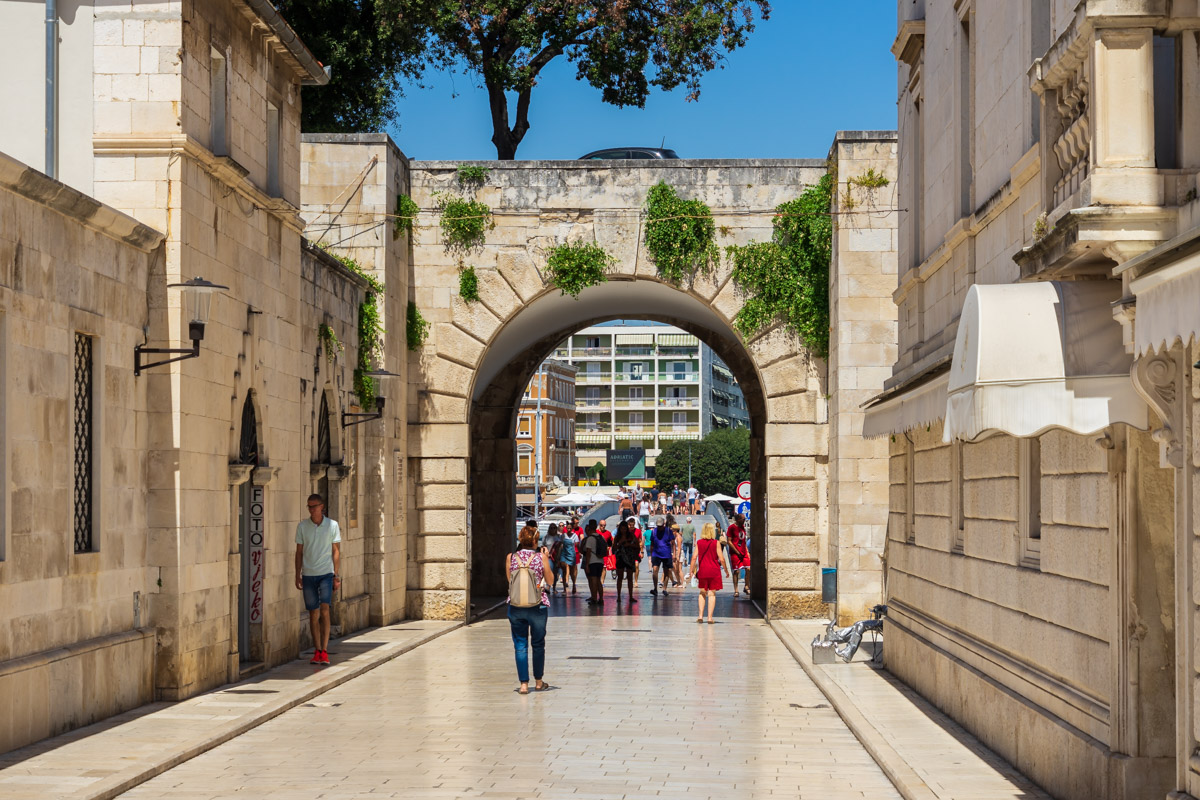 Now the World Heritage stuff is out of the way and we can look at the rest of the historic Zadar.

Except, the so-called Episcopal Complex at the heart of the historic town is itself a tentative WH site. It is putatively up for inscription in 2021, at which point it will increment my count. So there!

Nearly a dozen historical monuments and buildings are mentioned on the tentative WH submission, of which three of the most prominent ones are seen in this shot: the bell tower of the cathedral of Saint Anastasia, the church of Saint Donatus, and a fragment of the Roman Forum. 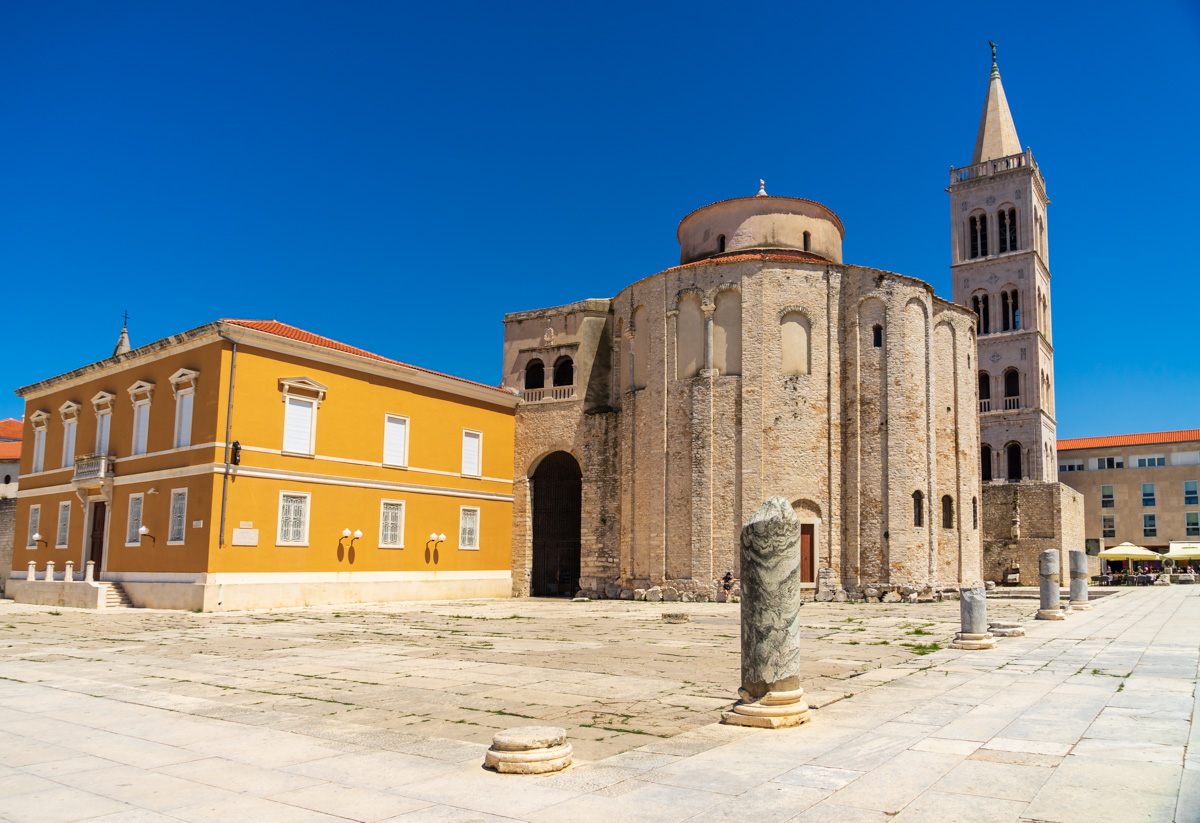 The Forum is not too large, clearly laid out in patterns that suggest its museum-like design, free to walk through, and draws a significant part of its appeal purely due to its location at the focal point of the town. 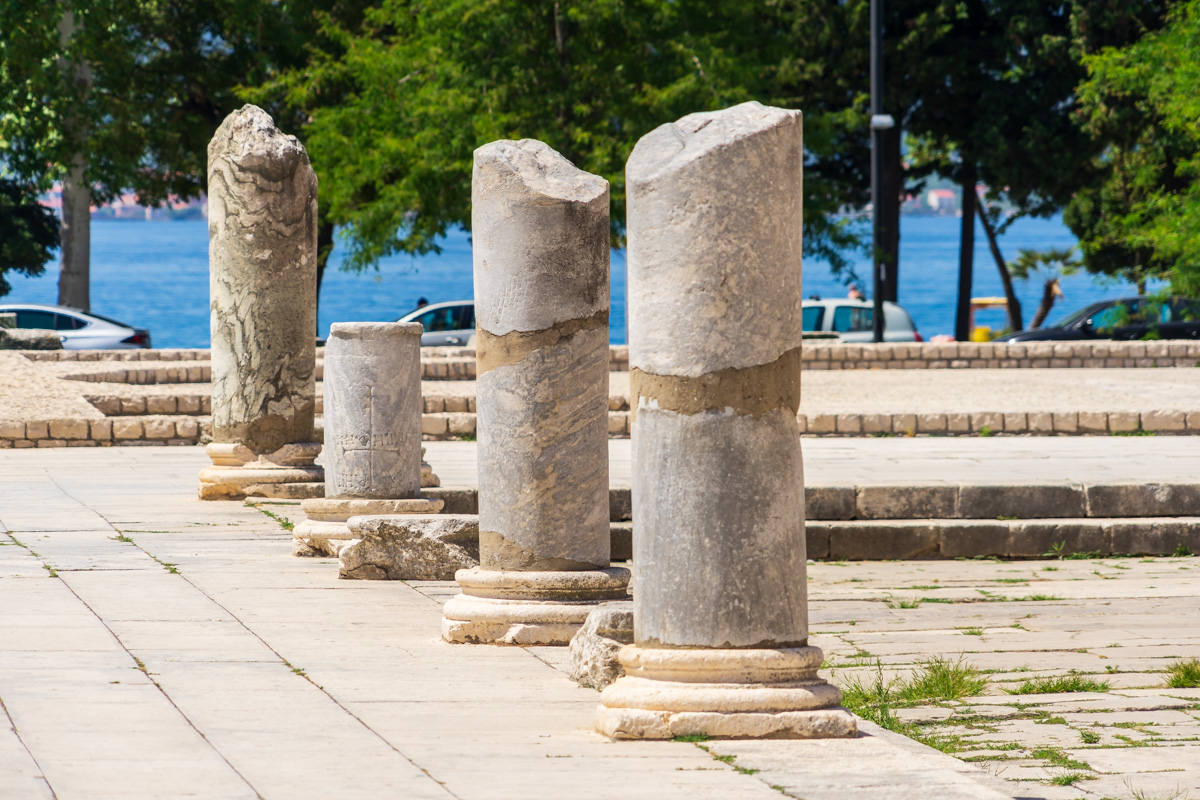 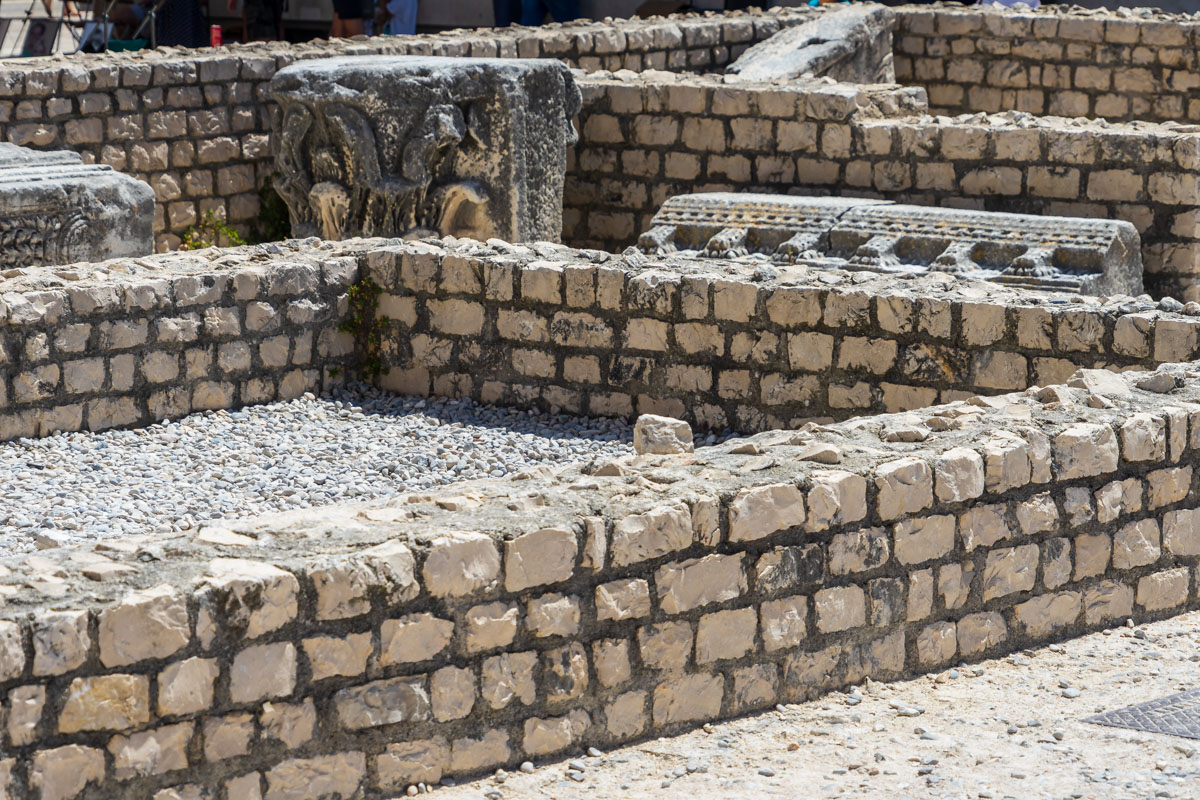 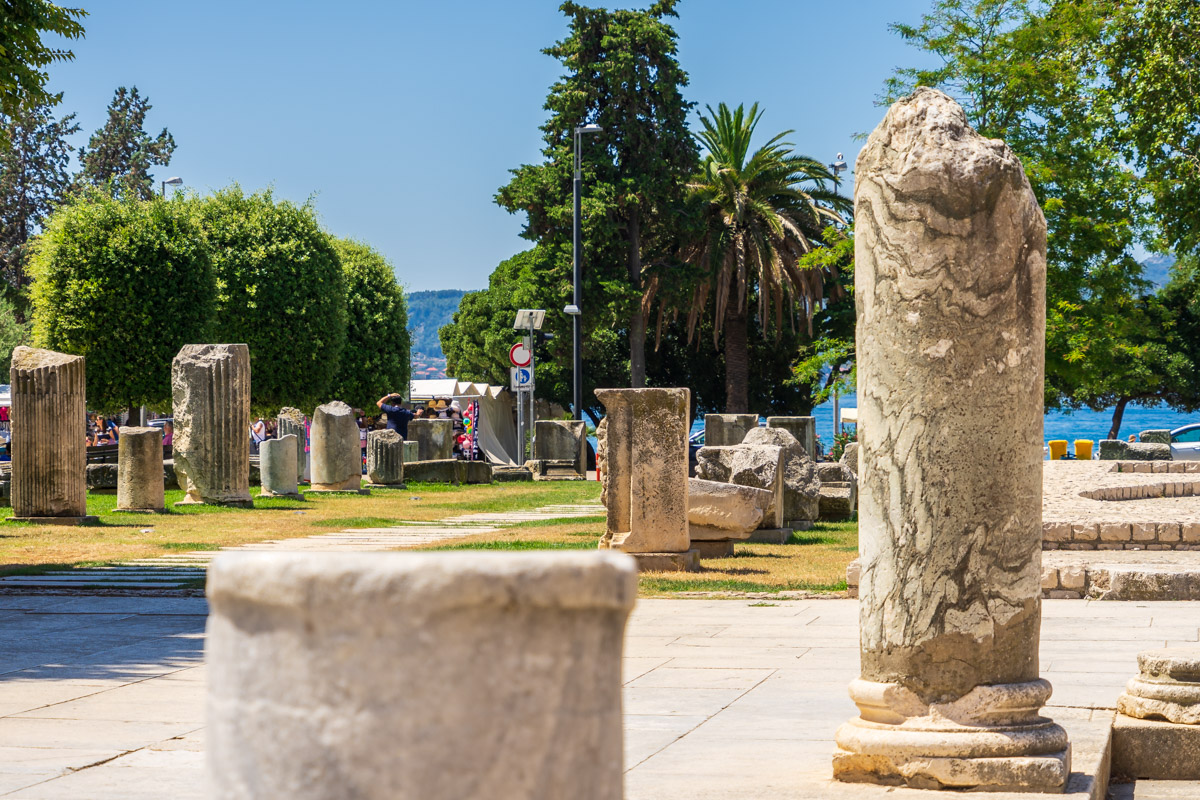 On the southern edge of the Forum are the church and monastery of St Mary and the archaelogical museum of Zadar, both also mentioned on the WH submission. We only looked at them from the outside. 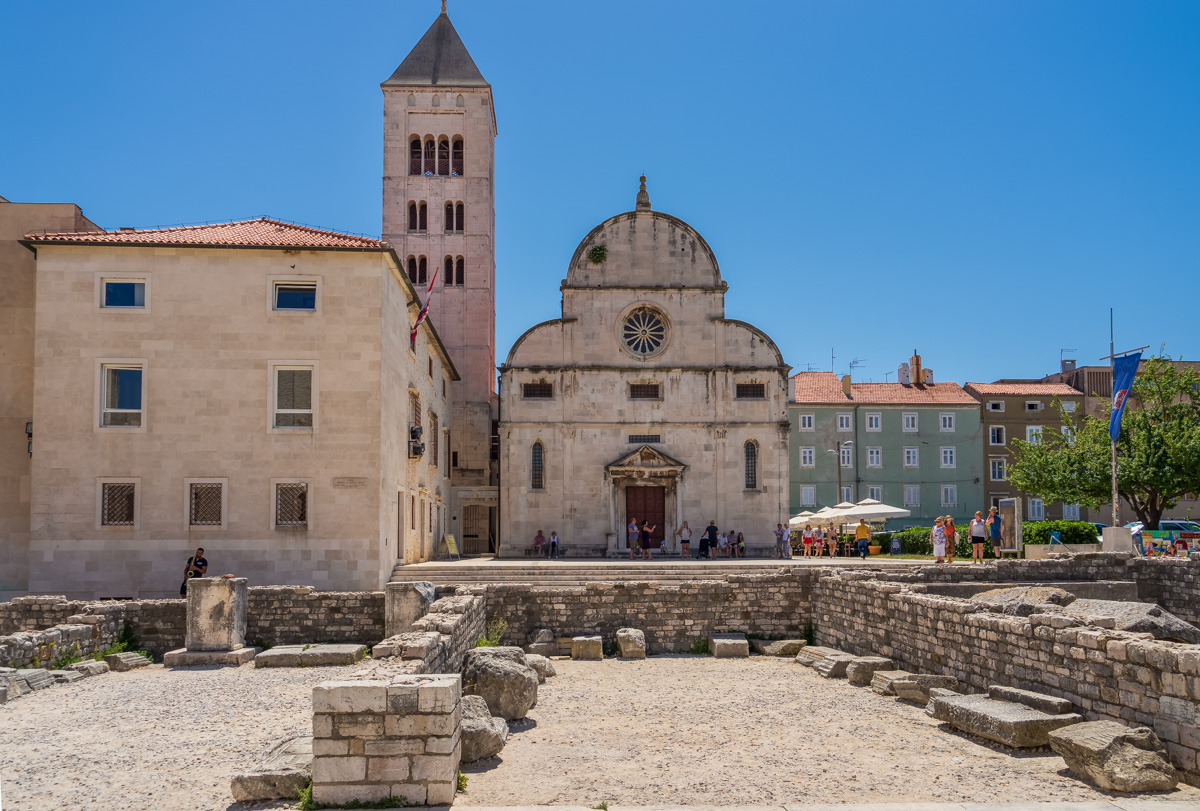 The orange building that is part of this overall ensemble provides such a prominent shot of color that I could not help but included it in multiple perspectives. 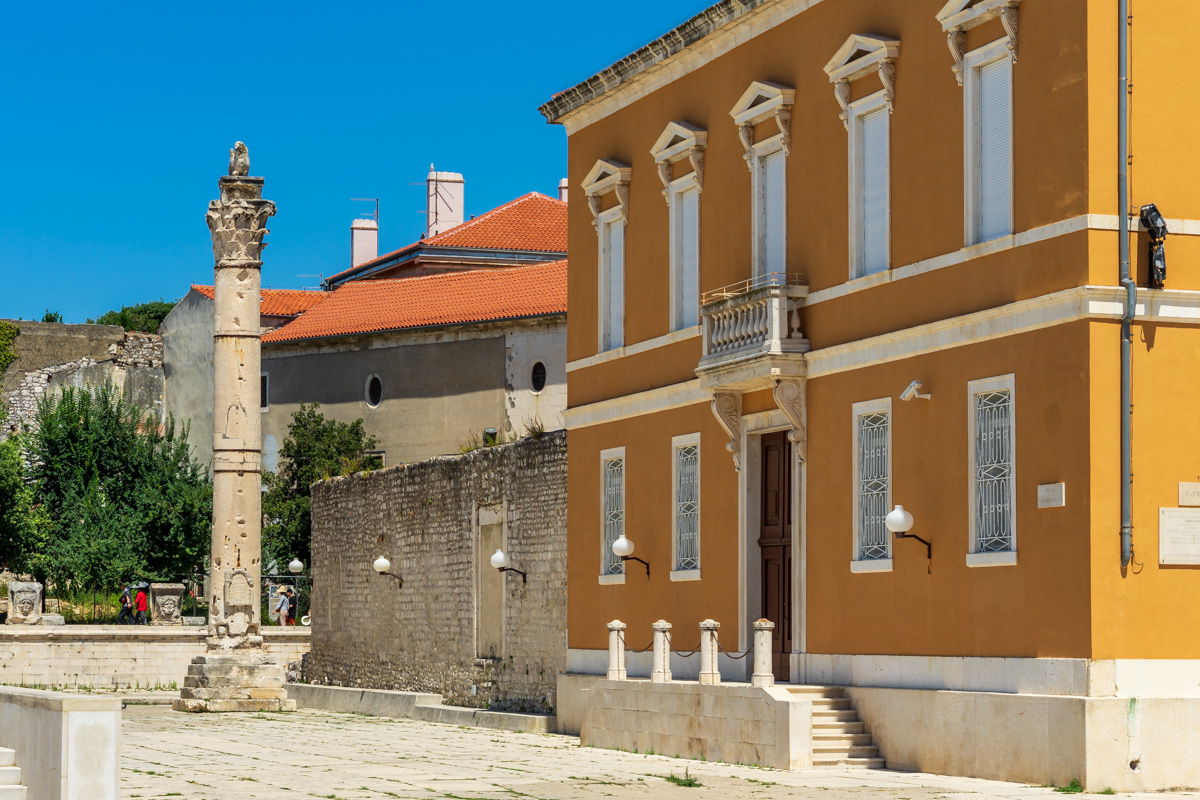 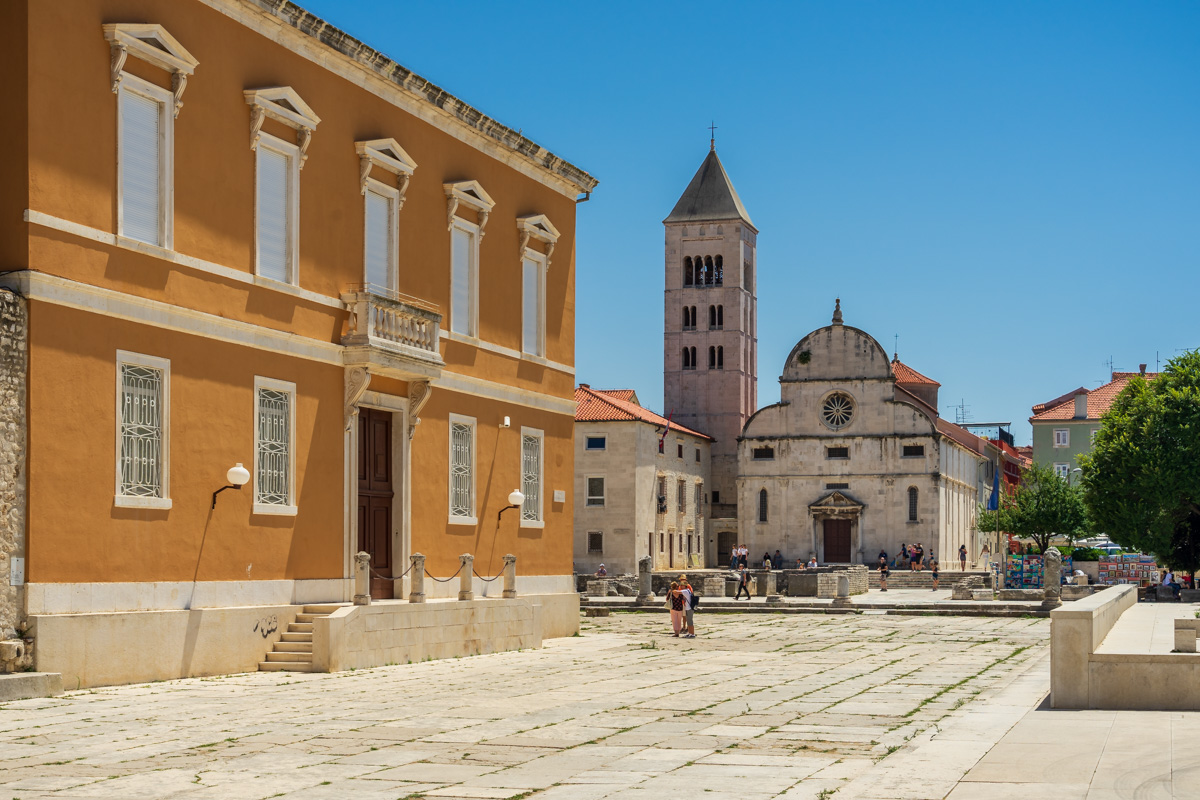 Saint Anastasia, whose façade opens on a small square away from the Forum, is very reminiscent of a typical Romanesque cathedral found in a midsize Italian town. 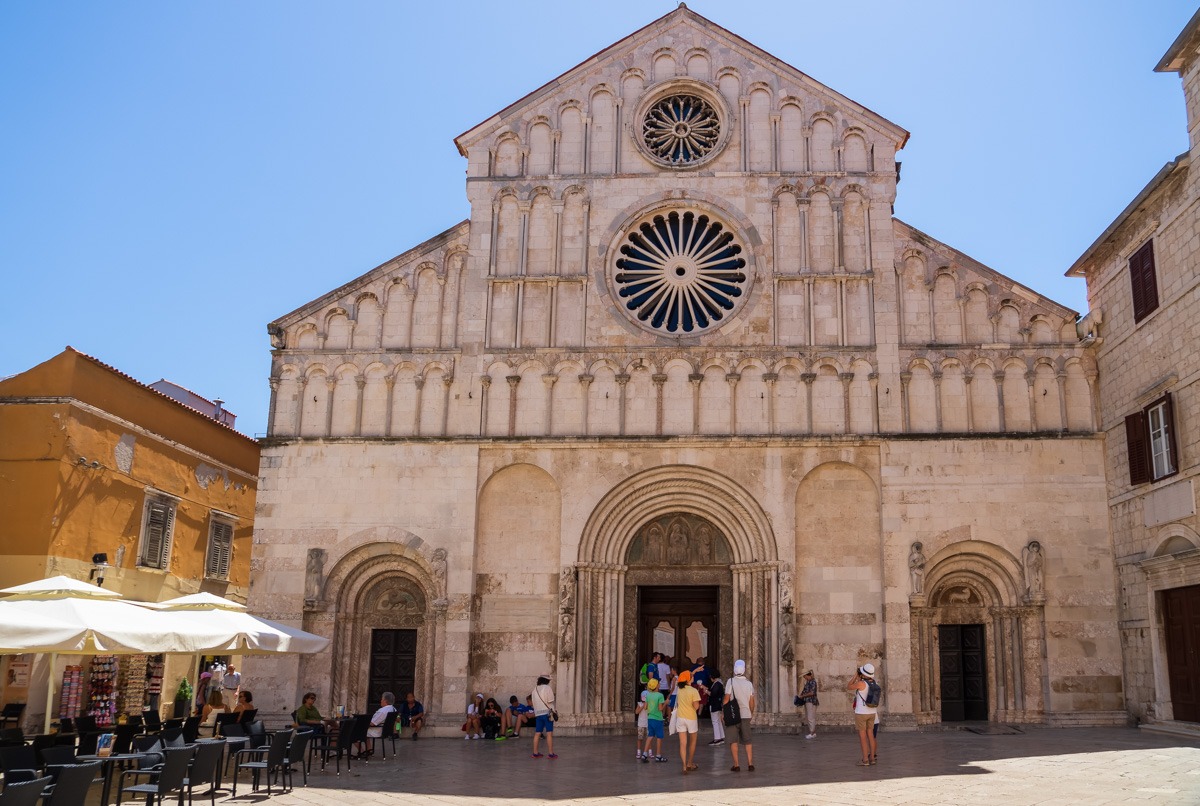 The cathedral’s interior is no more than just ok. The reliefs and the stonework of its portals are probably the most impressive features here. 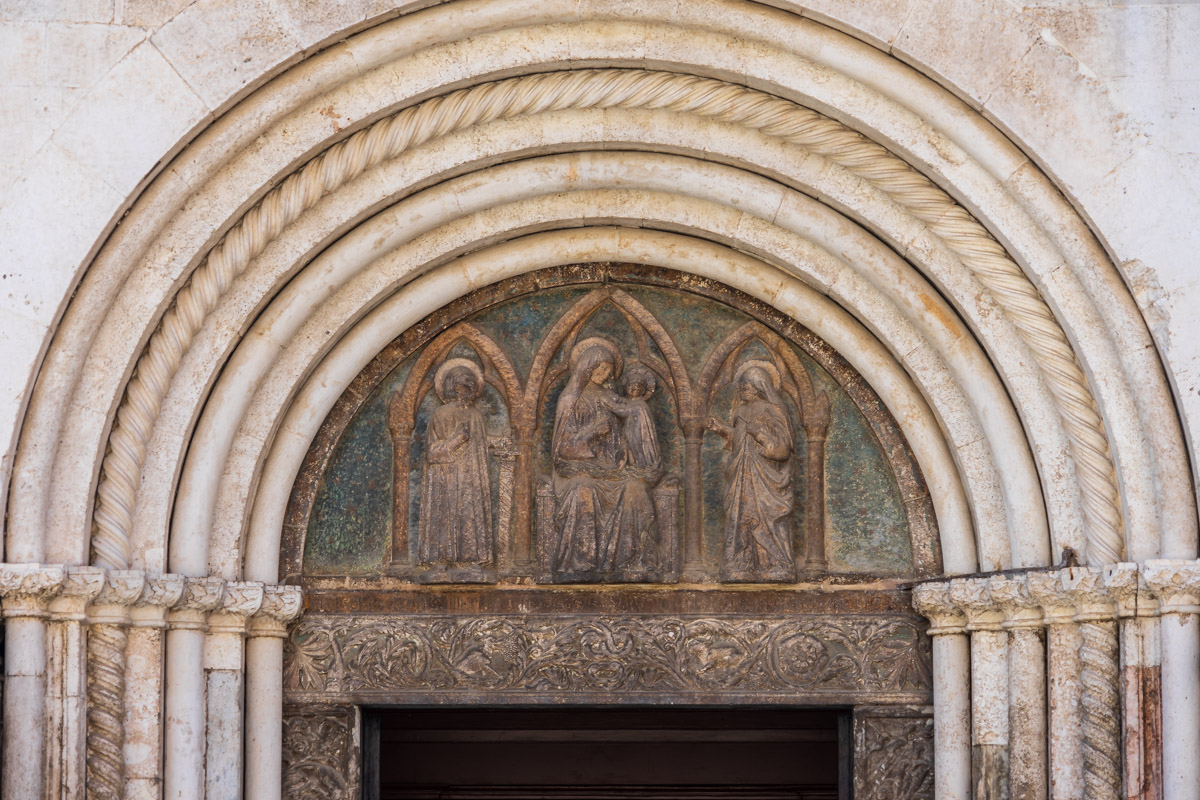 The Venetian influence is seen well beyond the walls and gates of Zadar, be it in the decorative element of an old well… 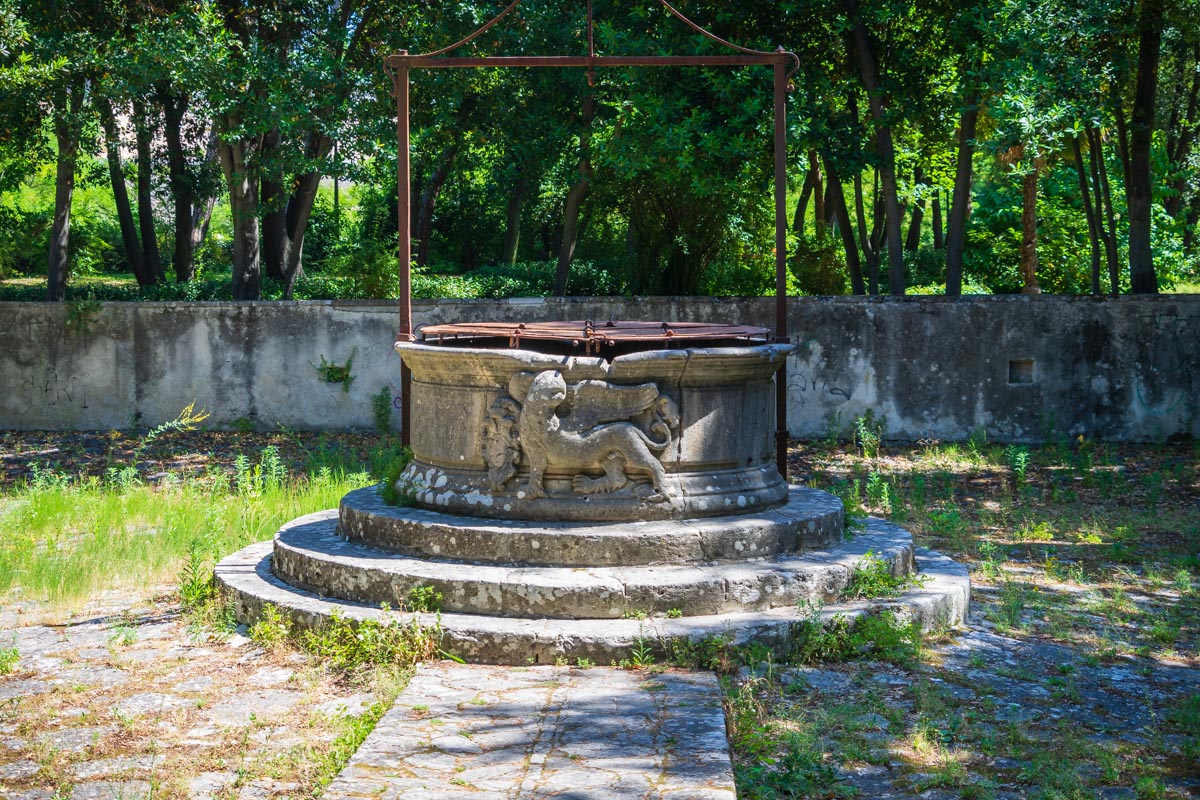 … or a lovely balcony… 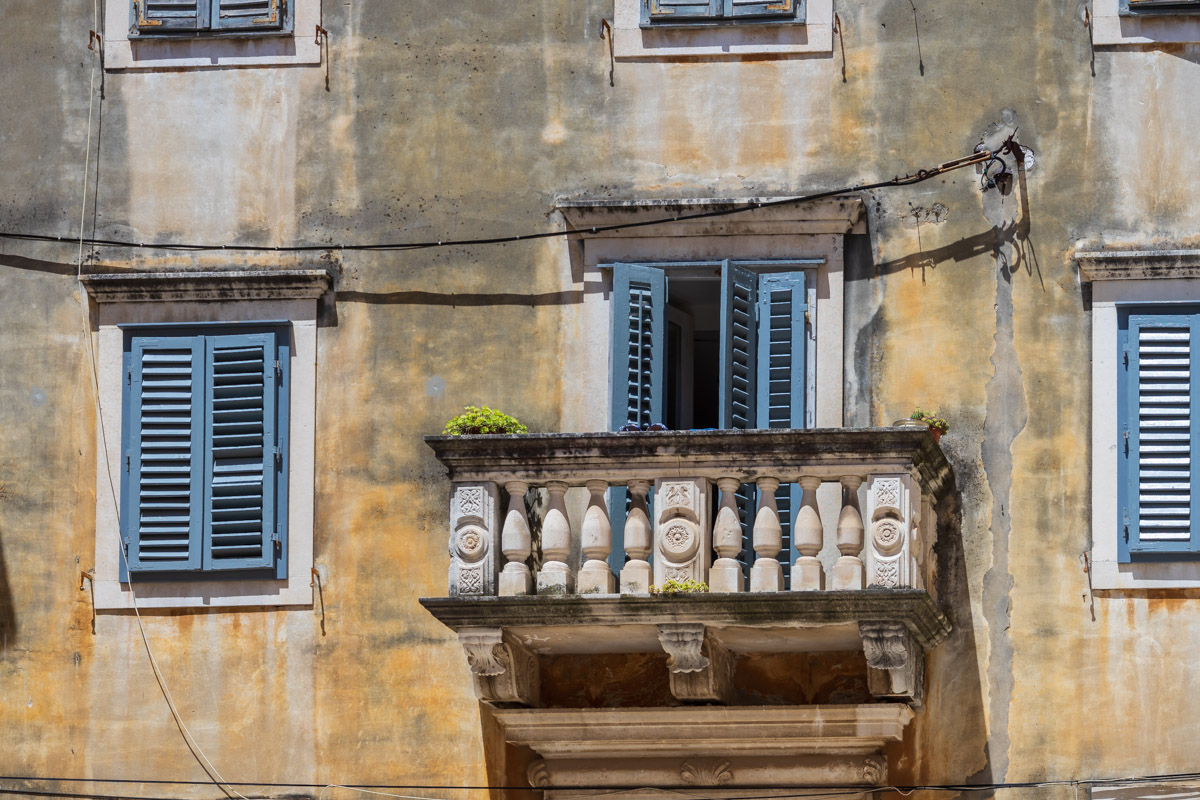 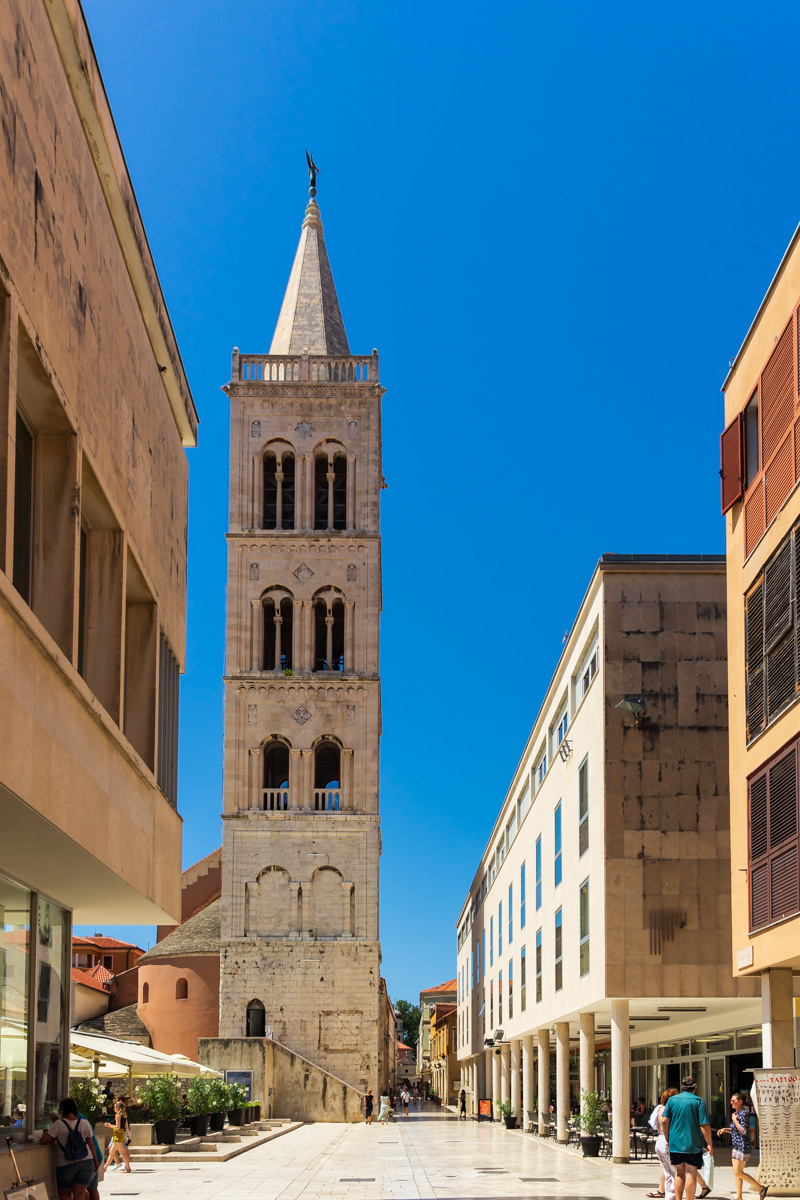 The tower is fairly easy to climb and the views from the top are quite worth the effort. Here is a part of the Forum and of the seaside promenade. 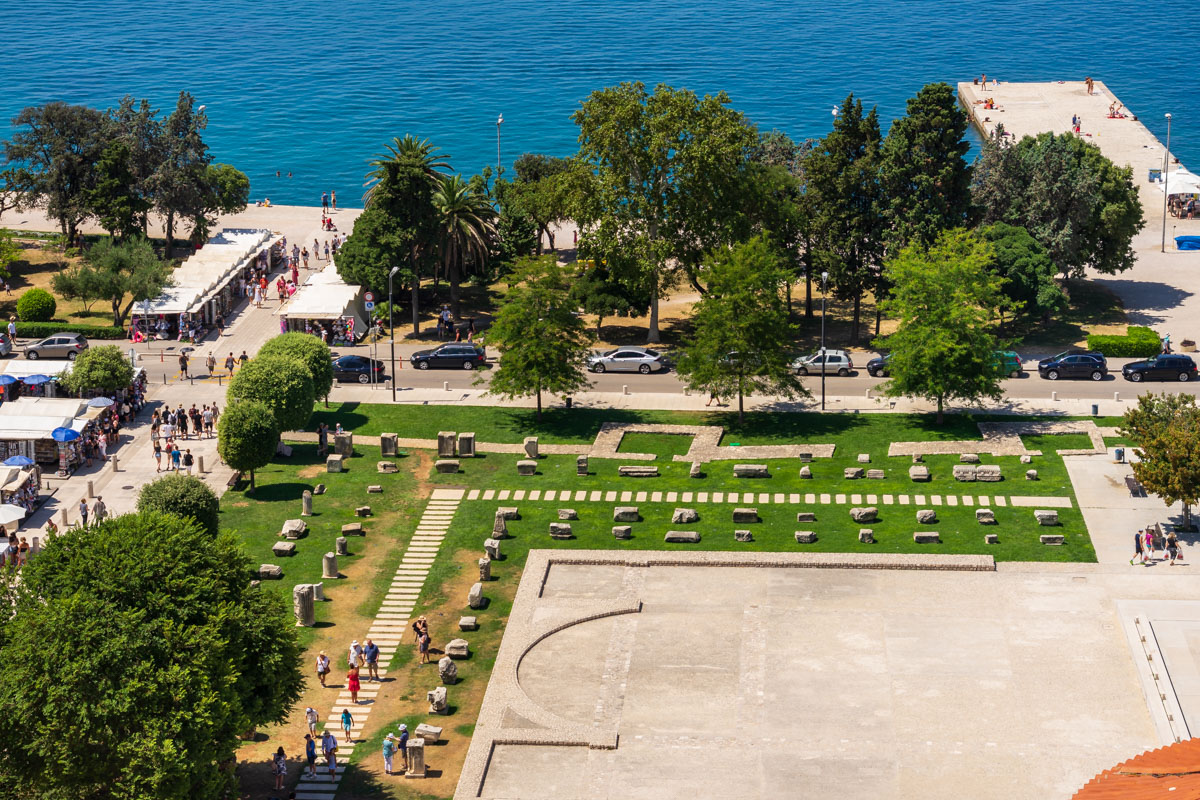 The eastward perspective towards the mountains, over the marina and the more modern part of the city. 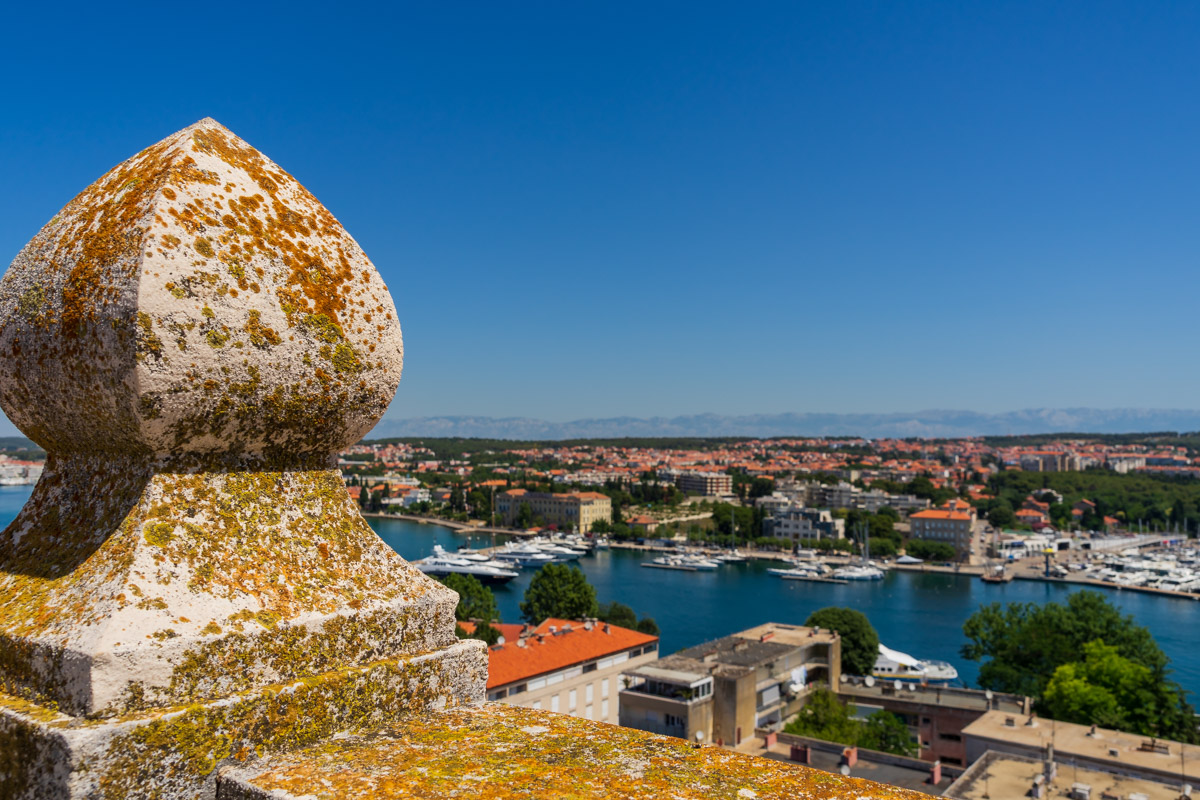 And the southward and northward views of the roof line. 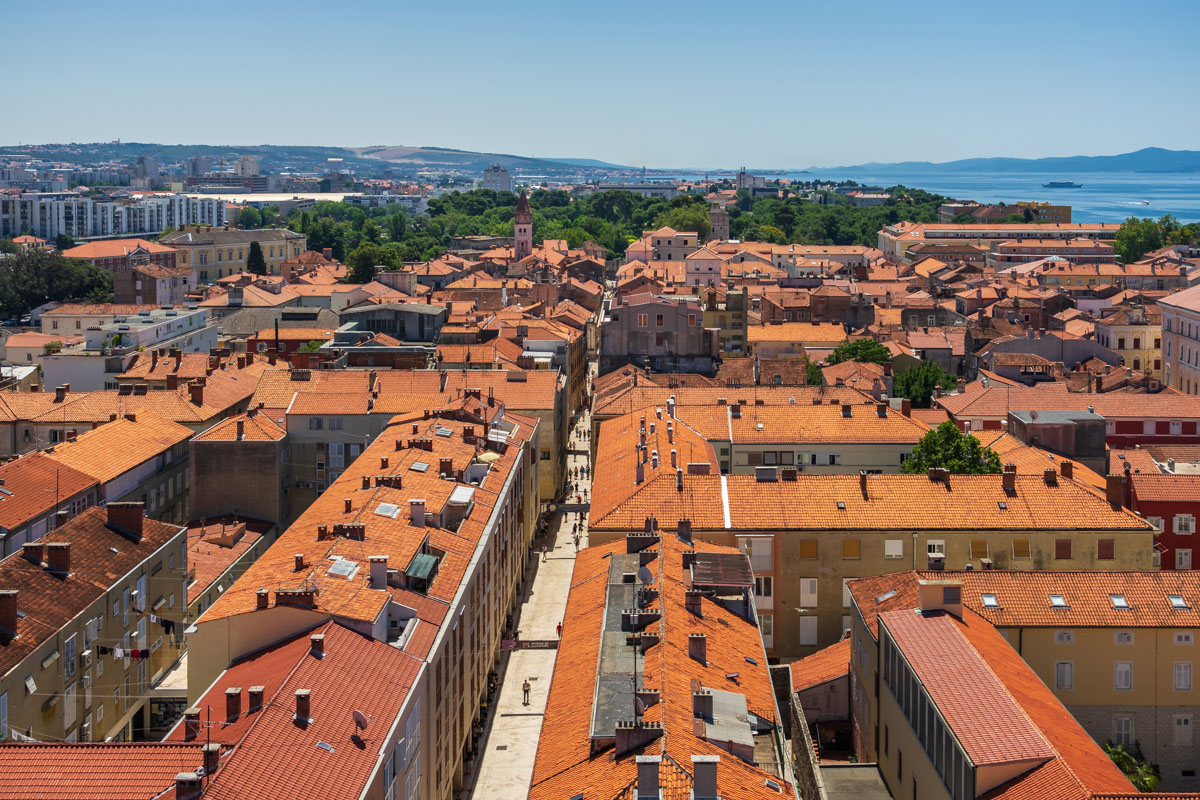 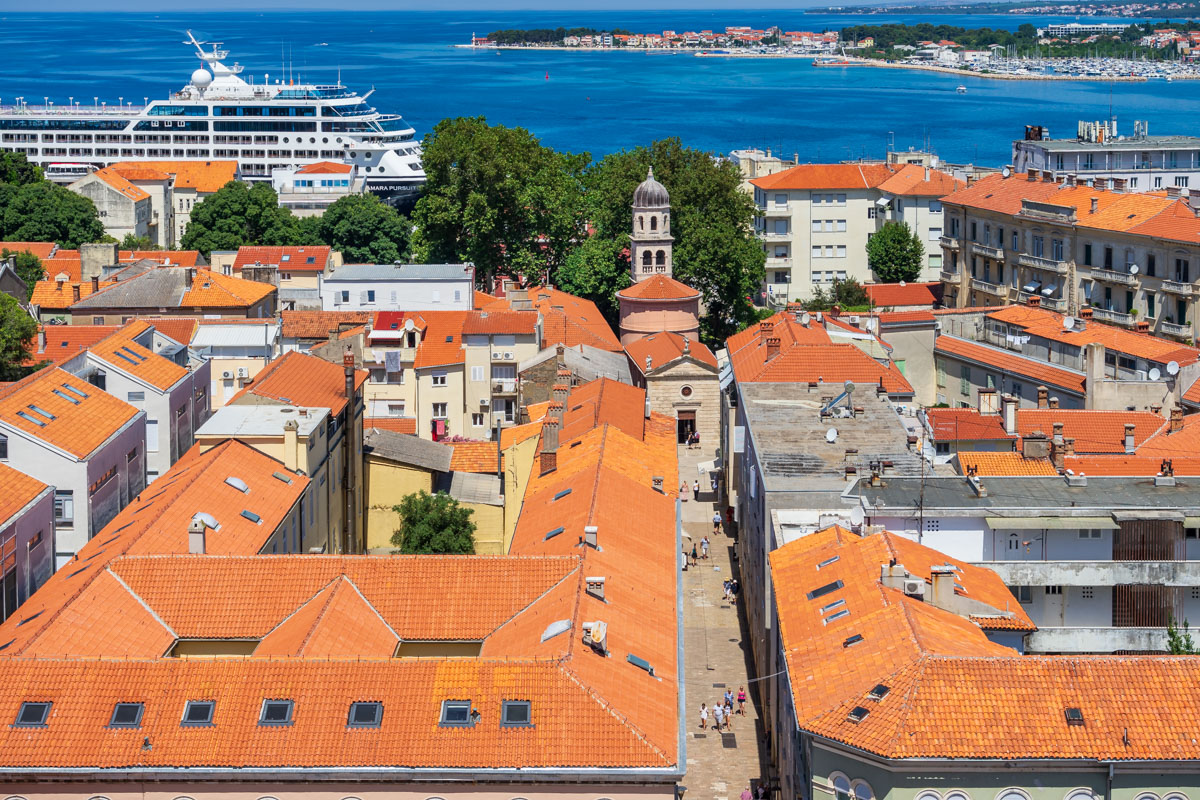 The wide street that featured in the last two shots is the main pedestrian street of the historic core of Zadar, appropriately called Široka Ulica (Broad Street). This is about as wide as it gets near the cathedral. 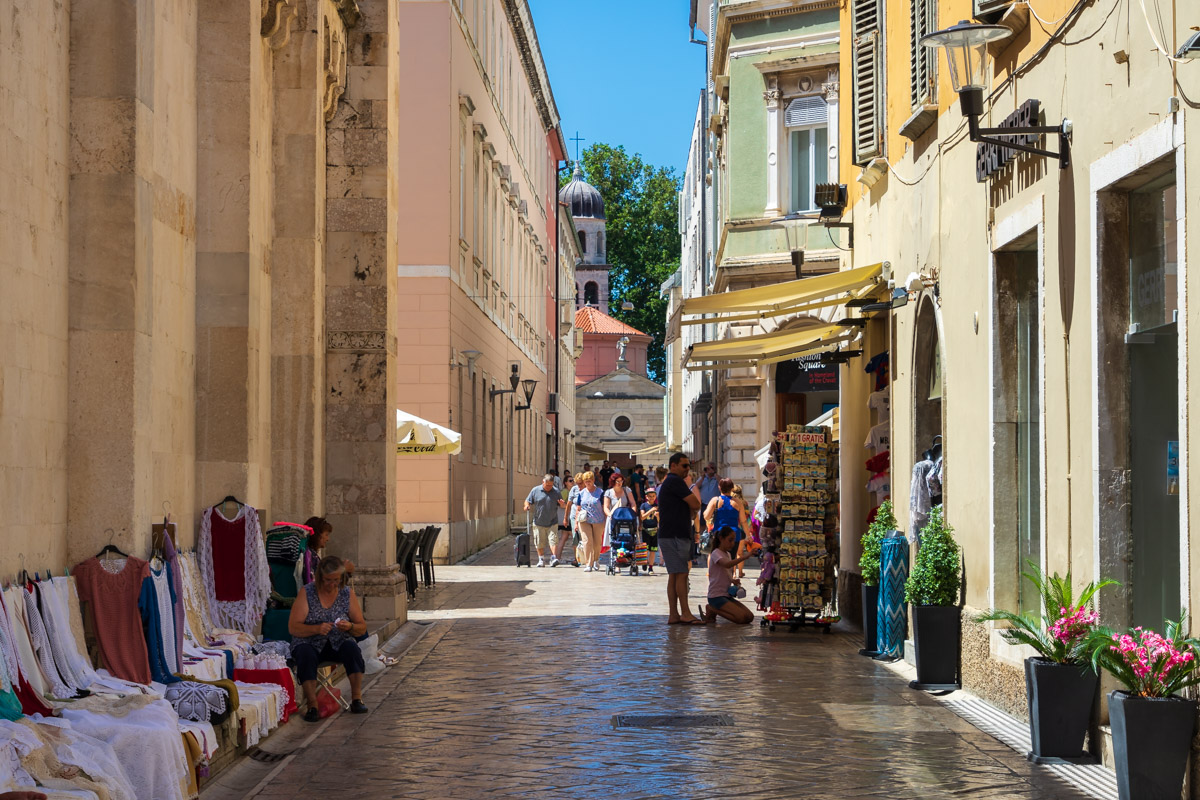 And here is an example of a colorful but far from broad street that is more the norm within the walls of Zadar. 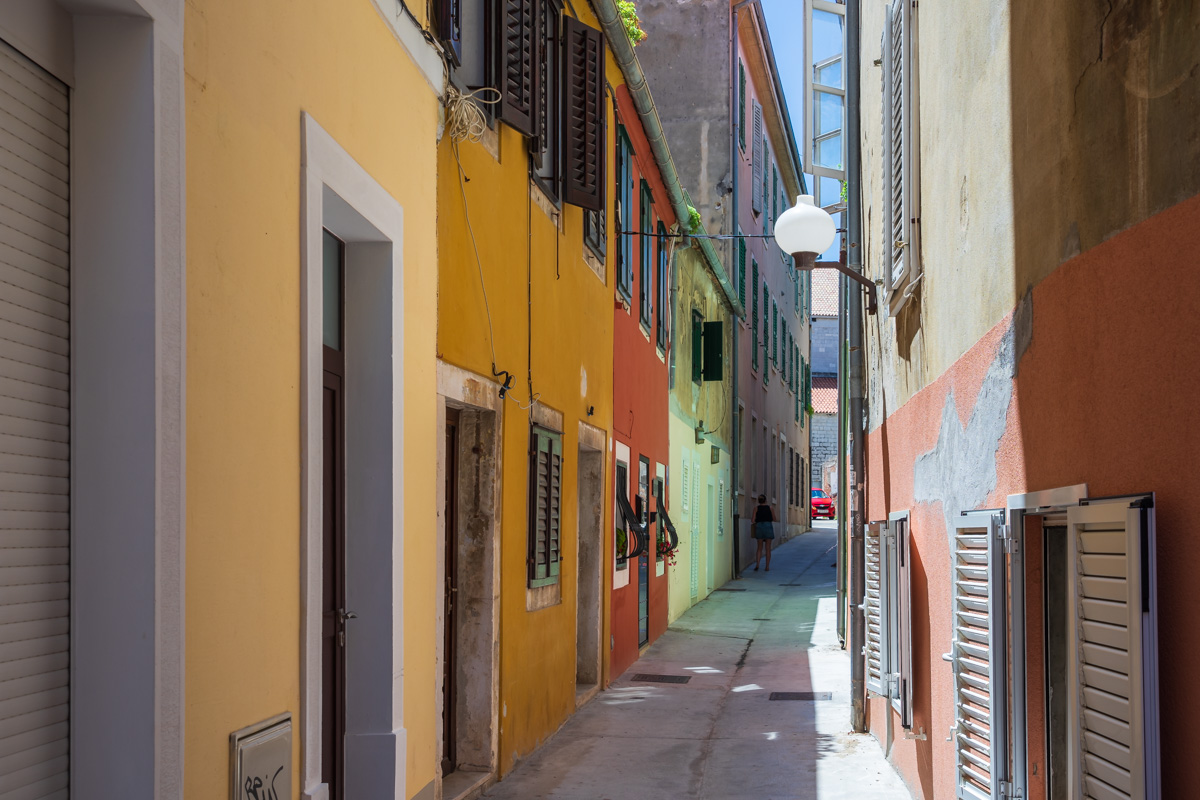 Colorful is also very much the norm, making Zadar look very lively. This is the building of the country seat, near the northern tip of the peninsula on which the historic center is located. 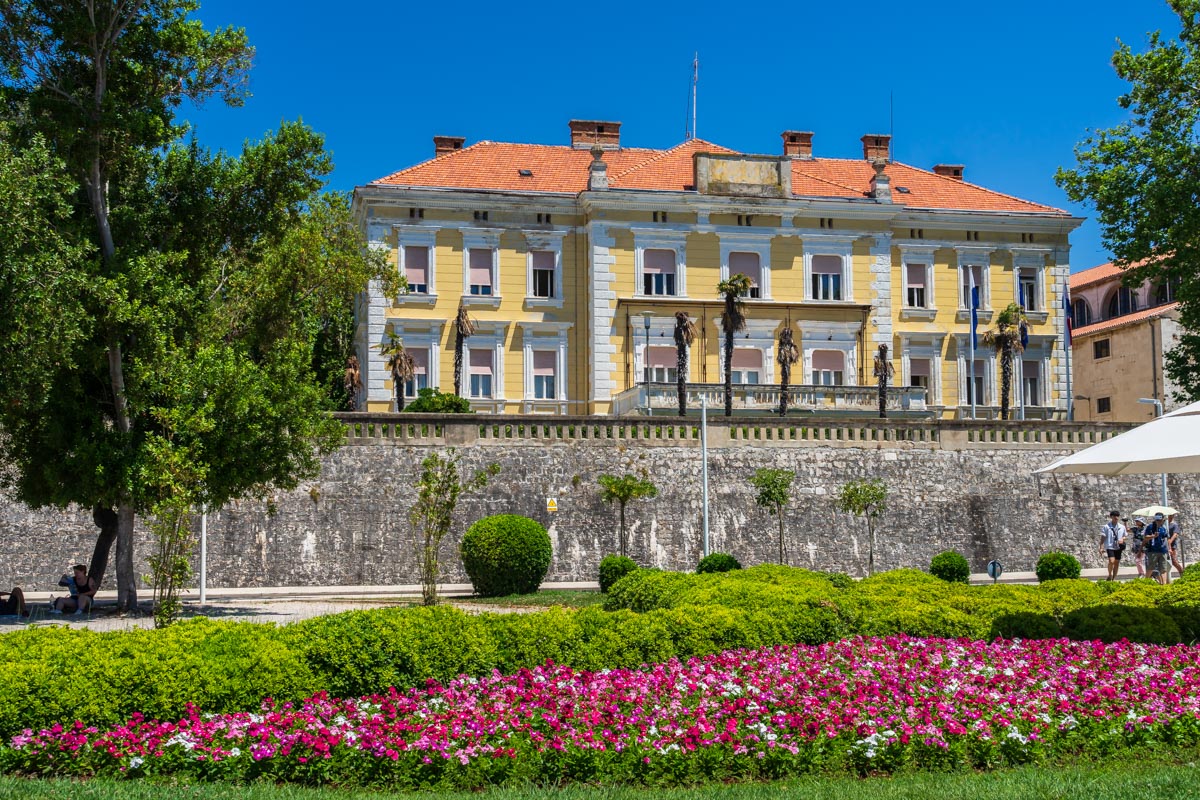 And here is a fragment of the Five Wells Square, on the opposite side of the peninsula back near the Land Gate. 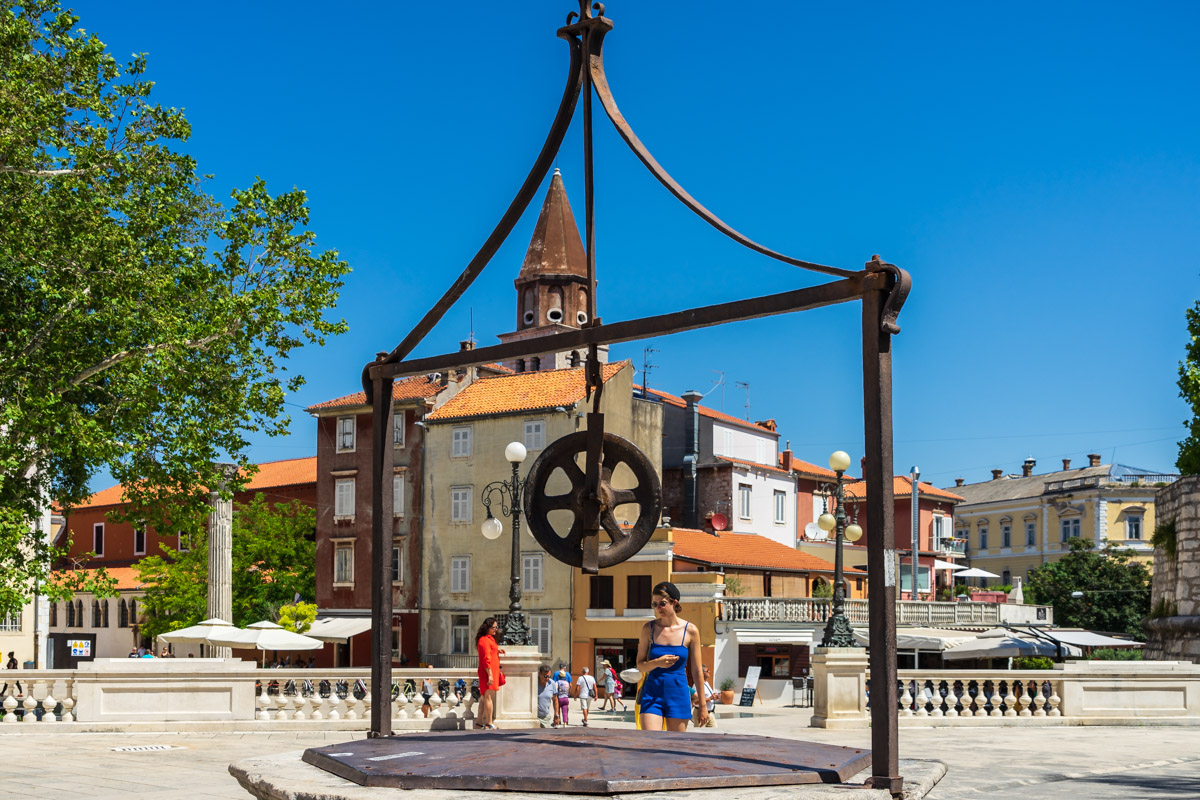 A wider angle that helps explain the literal name of this square. 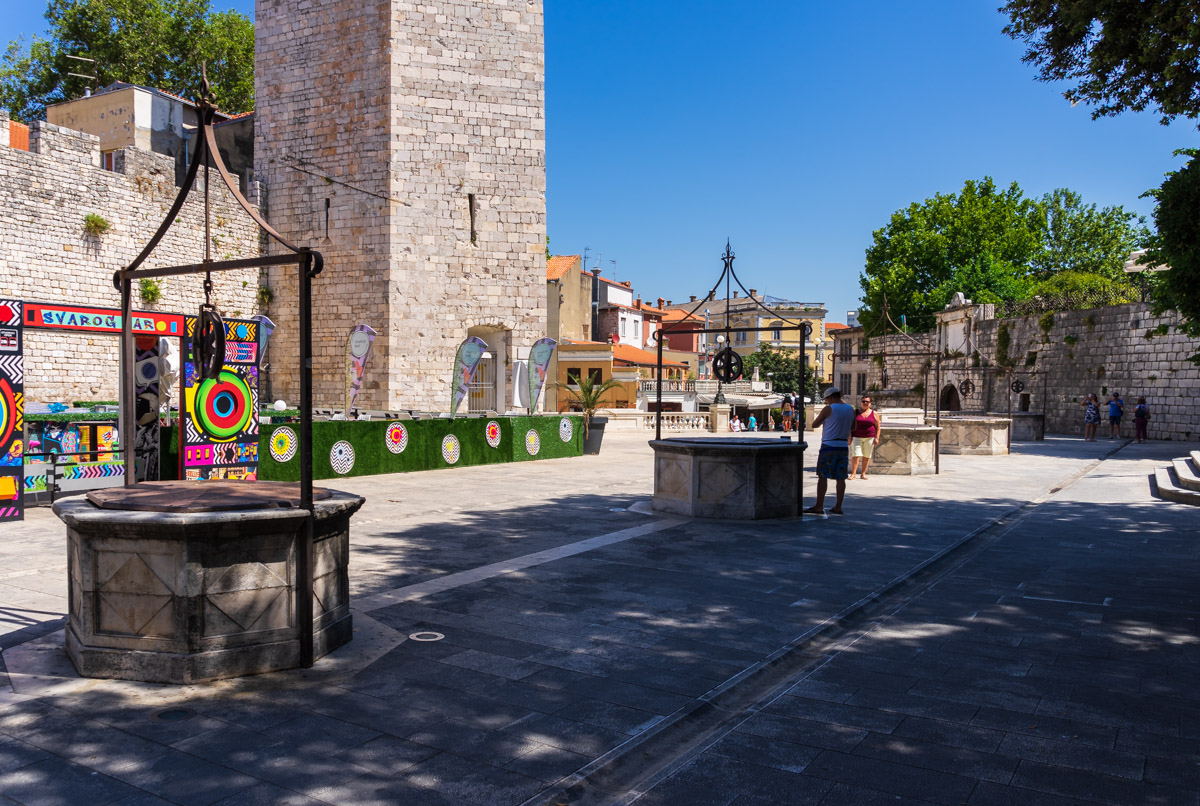 The killer attraction of Zadar is the Sea Organ, a system of sound chambers at the edge of the waterfront promenade that convert the energy of the waves into an unusual and unique auditory experience. The attraction is entirely acoustic, there is nothing to expressly photograph here, so instead here is a picture of two lovely spectators relaxing by the water edge. 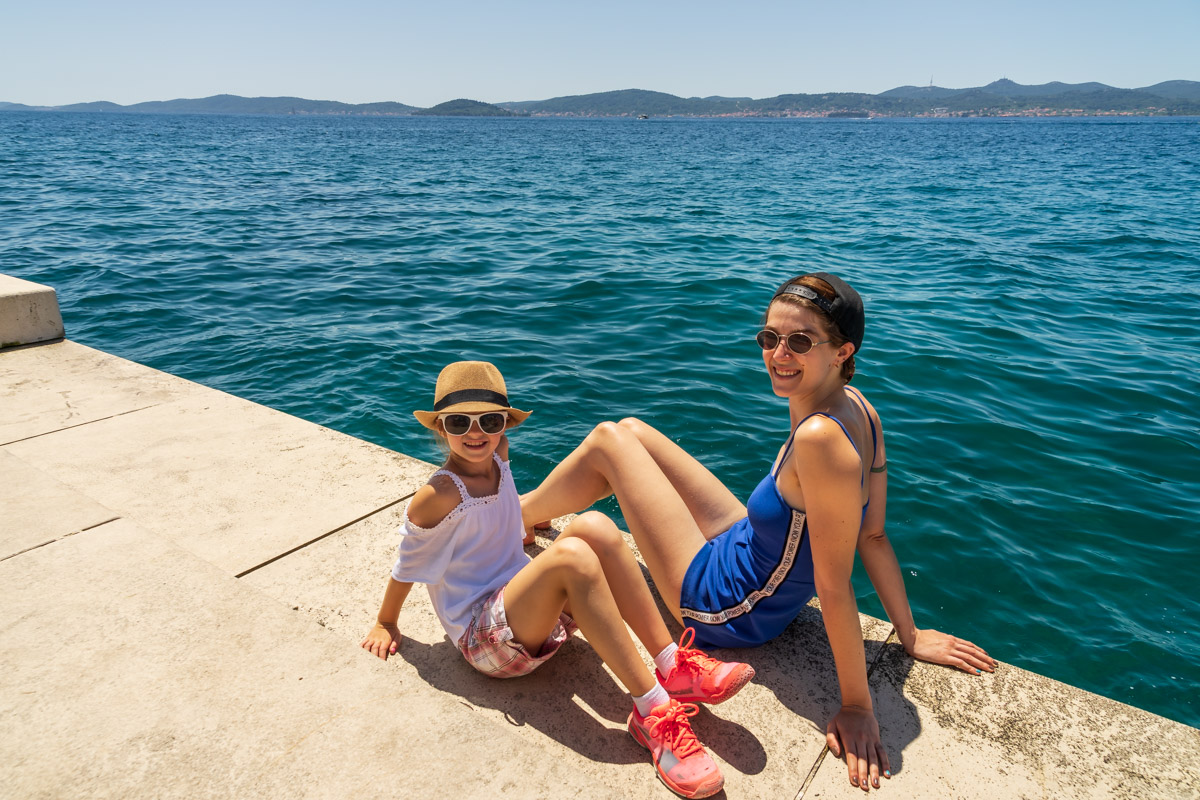 Zadar has a couple of museums that could be worth visiting, but museums were generally a low priority for us throughout this trip. With or without the museums, Zadar seemingly can be well explored in a single day, although staying here overnights adds a bonus of being able to enjoy the light show of the Greeting to the Sun monument right by the Sea Organ, which during the day is no more than a dull ring of solar panels (one that I did not manage to capture properly). Distance-wise, Zadar is about 2 hours from central Split by car; while within acceptable range for most day-trippers, I am left with the feeling of not being able to linger in town long enough due to the length of the return drive.

One of the members of our traveling party considers Zadar her favorite in Croatia. With its wider spaces and strong Venetian influence, it definitely stands out from other, more medieval in appearance, major towns on the Dalmatian coast.