As my Portugal photo-essay series over the last couple of months clearly shows, our traveling targets in the country were heavily aligned with my well-publicized pursuit of the World Heritage. And yet, practically all of the places that we visited would likely feature – or at least be considered as options – on anyone’s itinerary, regardless of that traveler’s affinity for collecting WH sites.

Only on the very last day in Portugal did we go to a place that I suspect non-chasers of World Heritage would not prioritize in their plans – the capital of the Alentejo region, Évora.

A city with more than twenty centuries of history, Évora retains monuments of different eras. The oldest is the Roman temple of Diana, standing on an airy square at the edge of the town center. 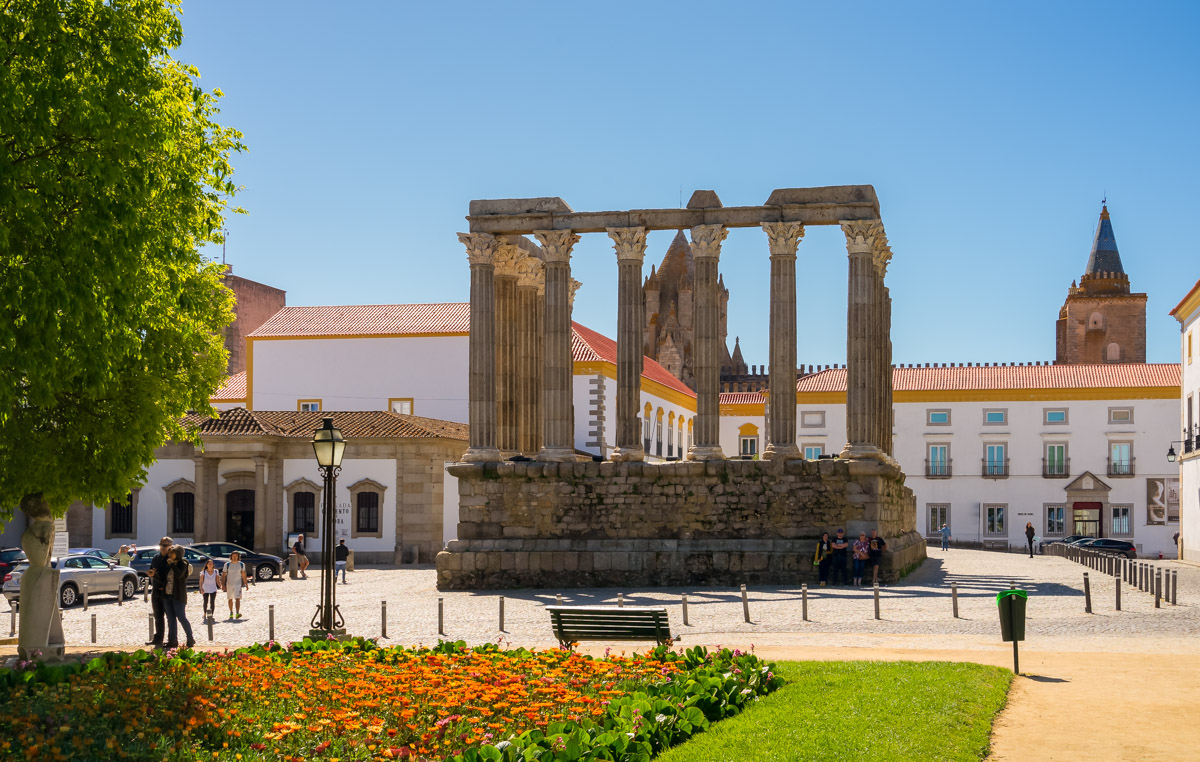 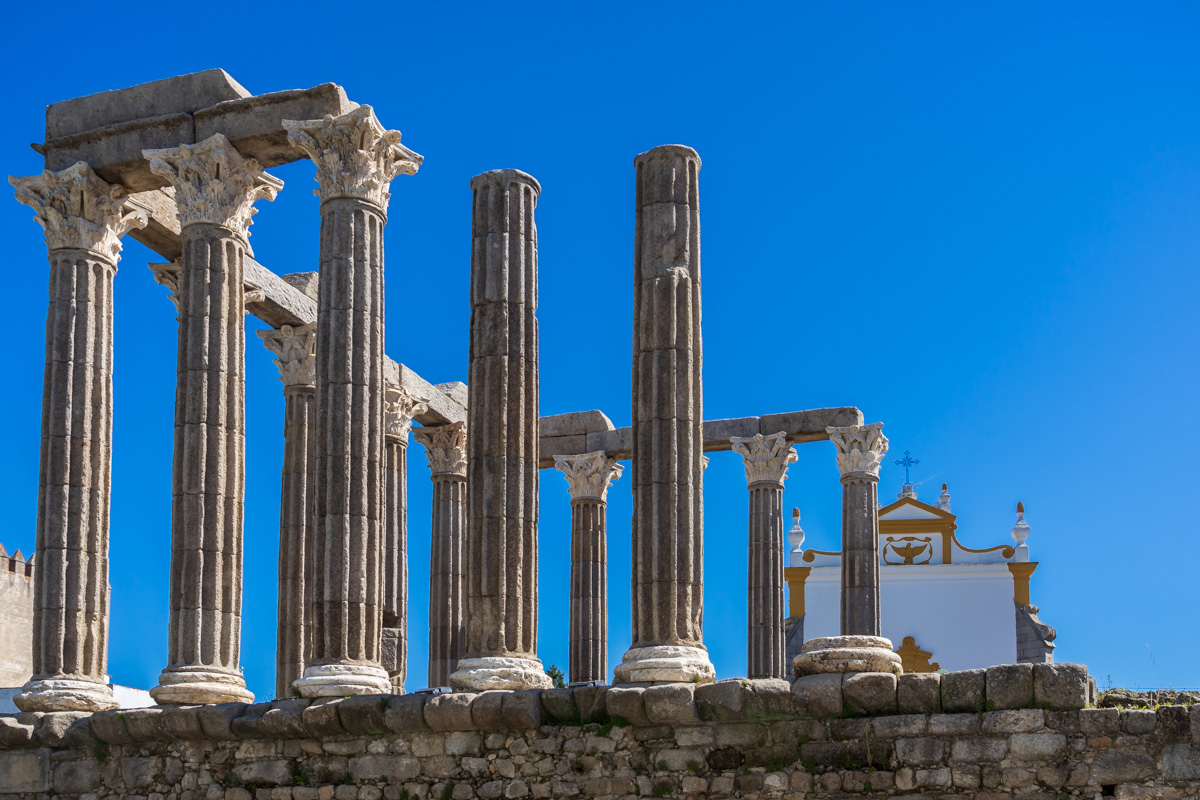 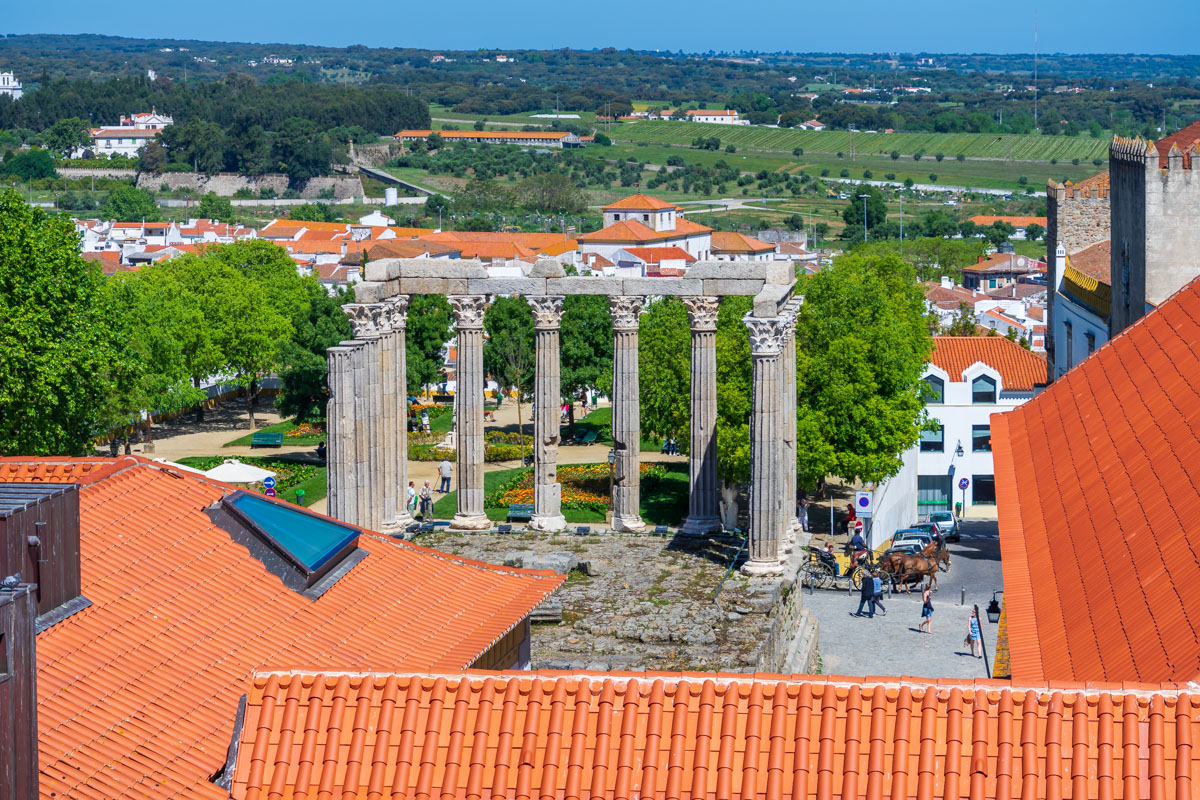 The medieval cathedral, another major sight in town, first dates from the early 13th century. Its suitably somber exterior (not captured with any degree of success) hides a fairly vibrant interior. 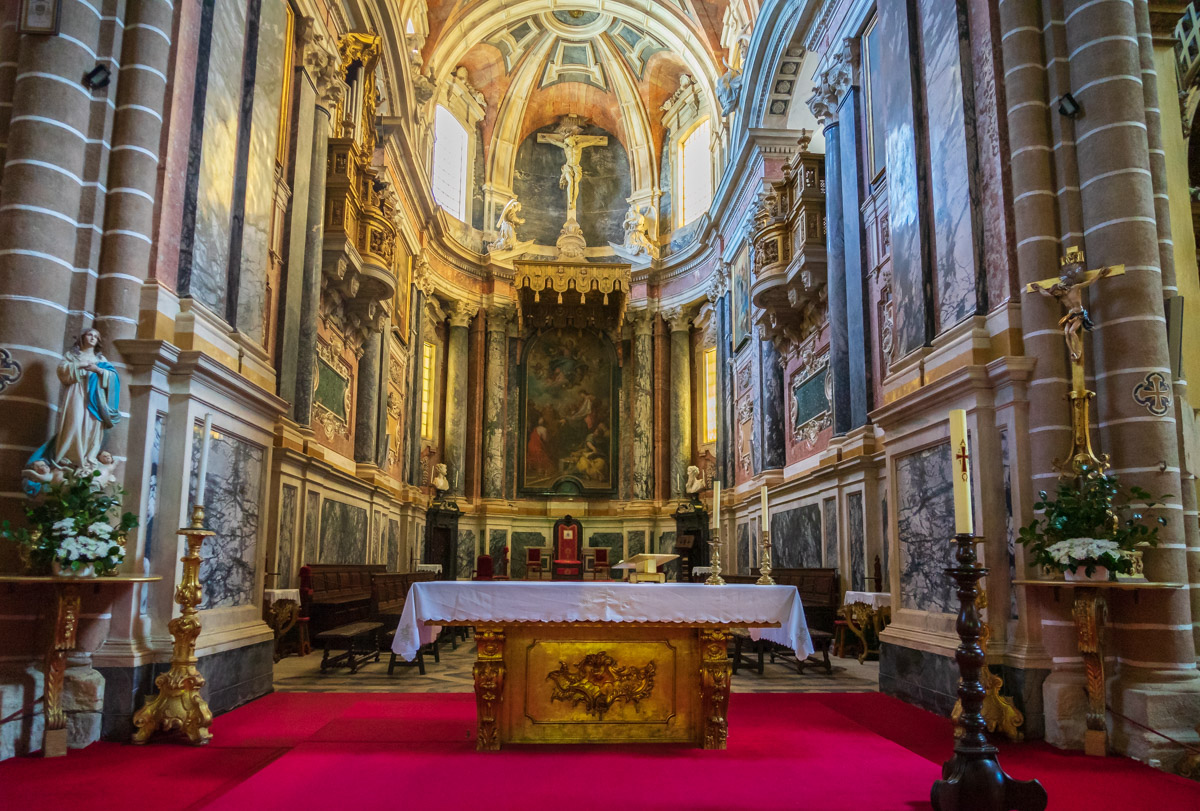 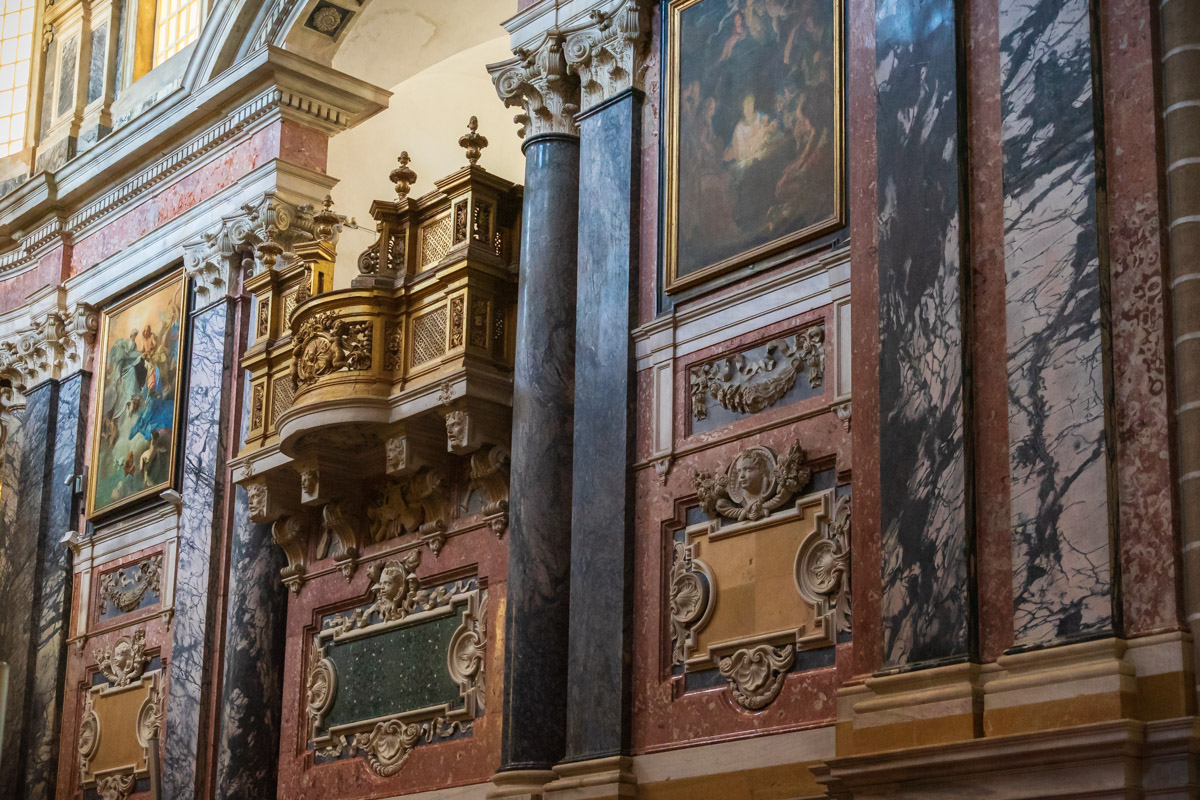 One of the prominent features of the cathedral’s interior is the Baroque altar with a statue of pregnant Virgin Mary (called Nossa Senhora do O), created in the 15th century. It is highly uncommon in its positioning in the middle of the central nave of the church. 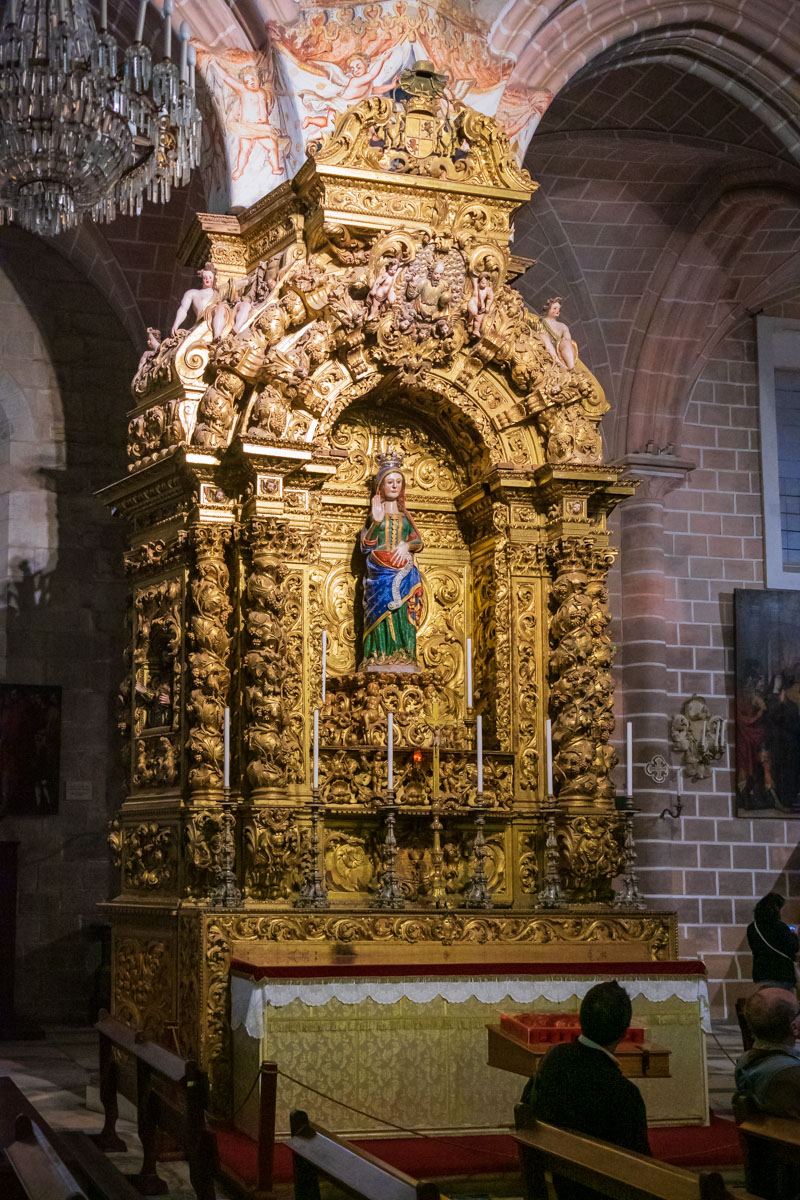 The non-repeating patterns of arch windows in the cloisters echo those in Alcobaça. 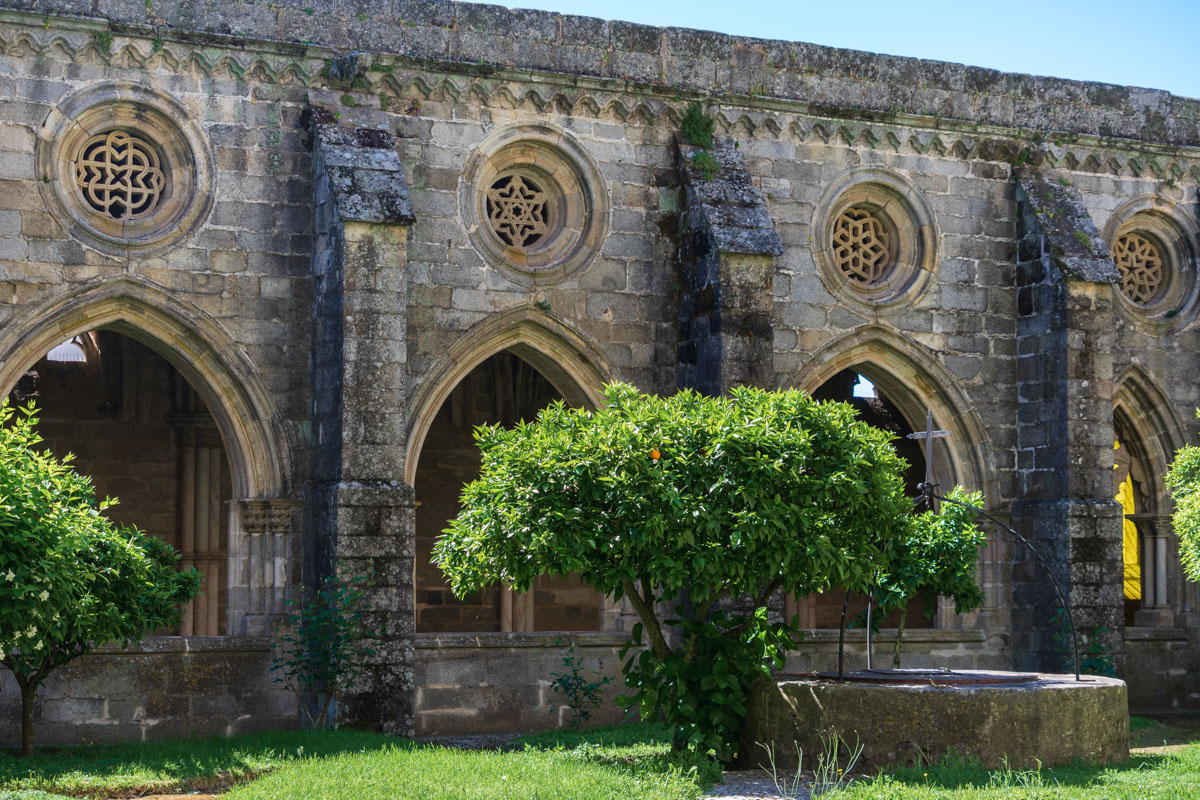 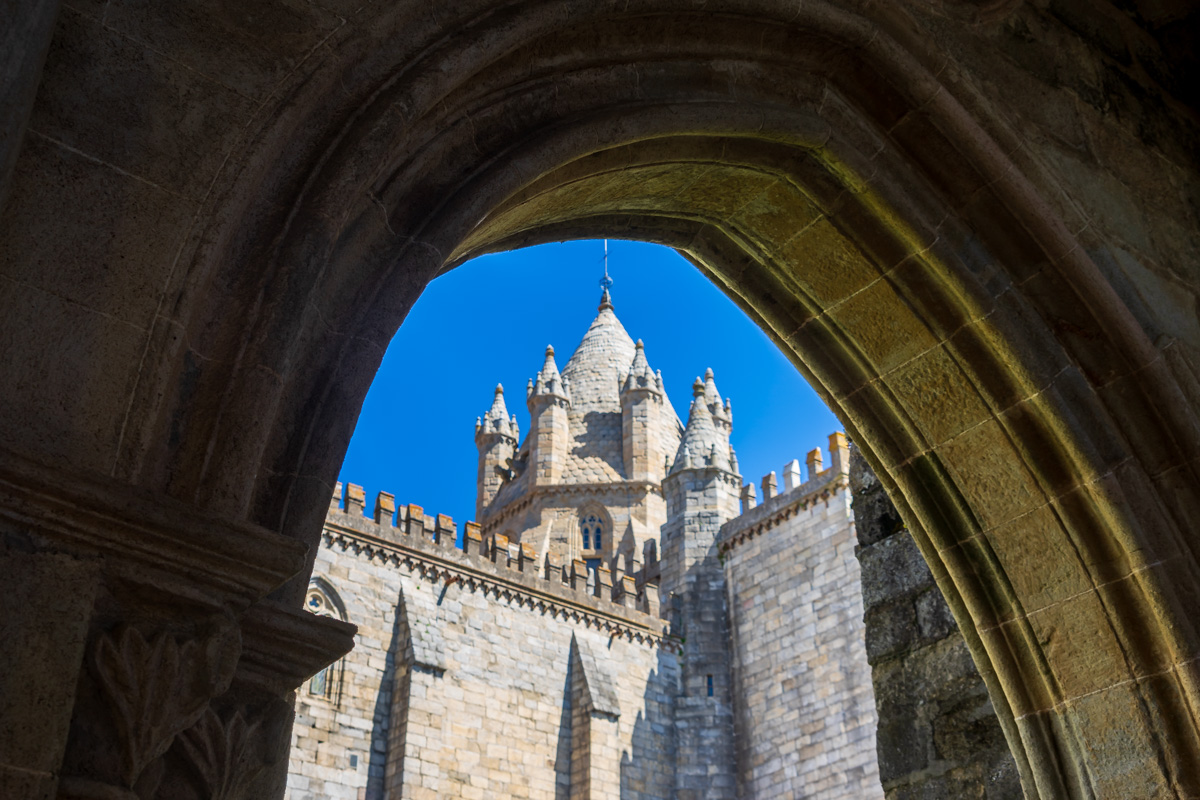 You can also climb to the roof of the cathedral, both for views over town and for a number of impressive details. 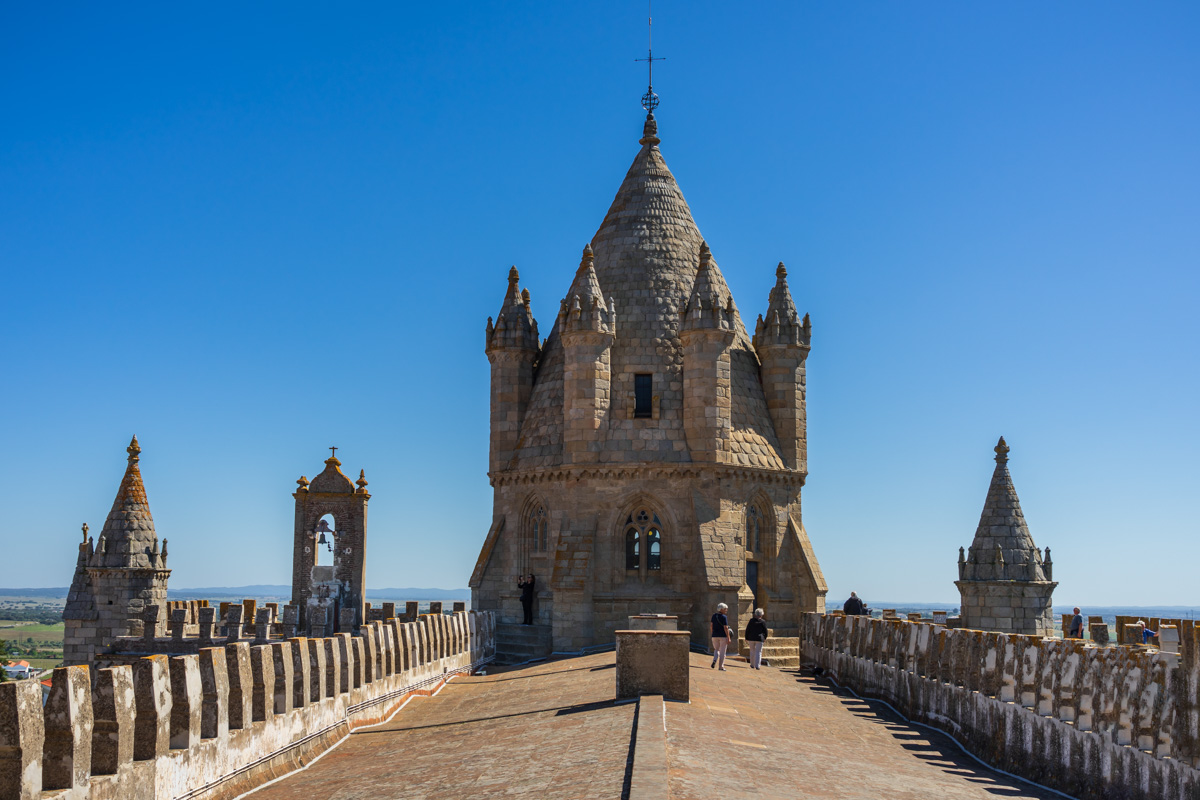 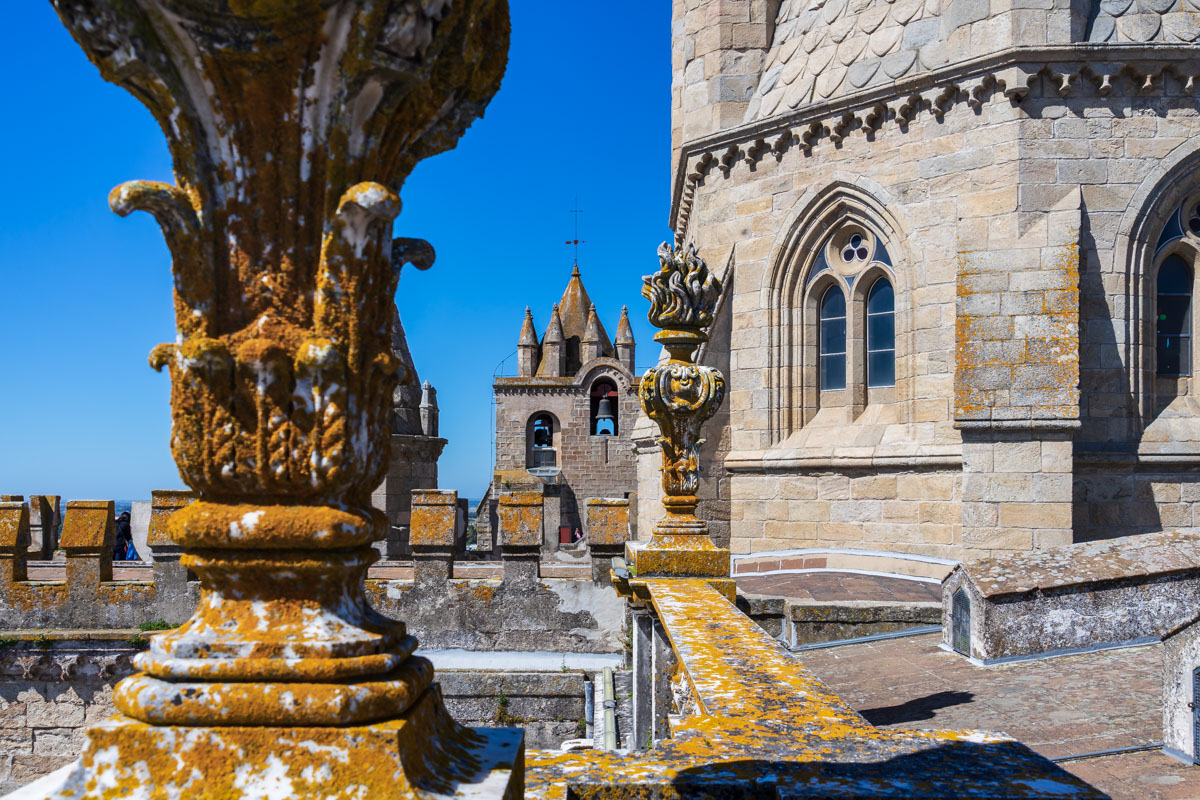 The town roof line, I have to say, is actually kind of bland. 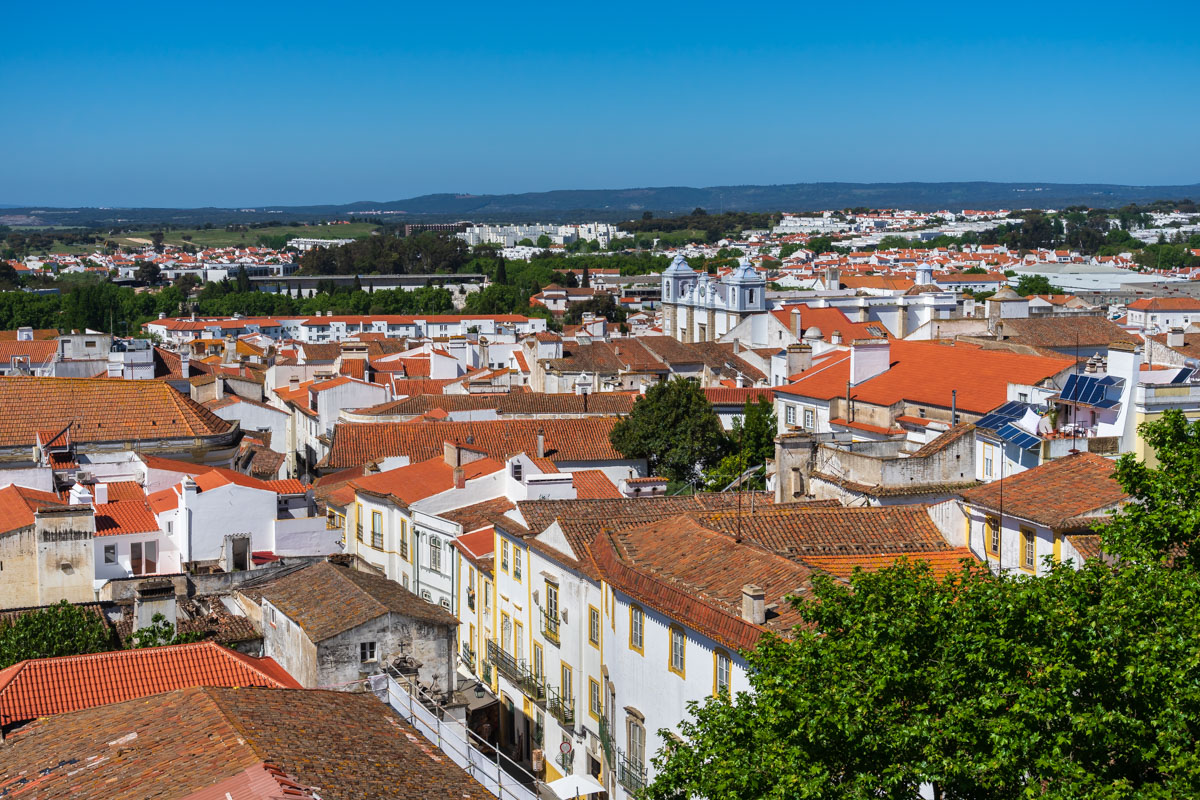 Three colors predominate in Évora’s palette: white, yellow, and red. The core of the town is practically all whitewashed with yellow accents, with many of the houses dating from between 16th and 18th centuries, Évora’s golden age, when it was a regular residence of the royals. The white façades, unfortunately, are discolored in a fair number of instances, which gives many perspectives a bit of a dirty-ish tint. 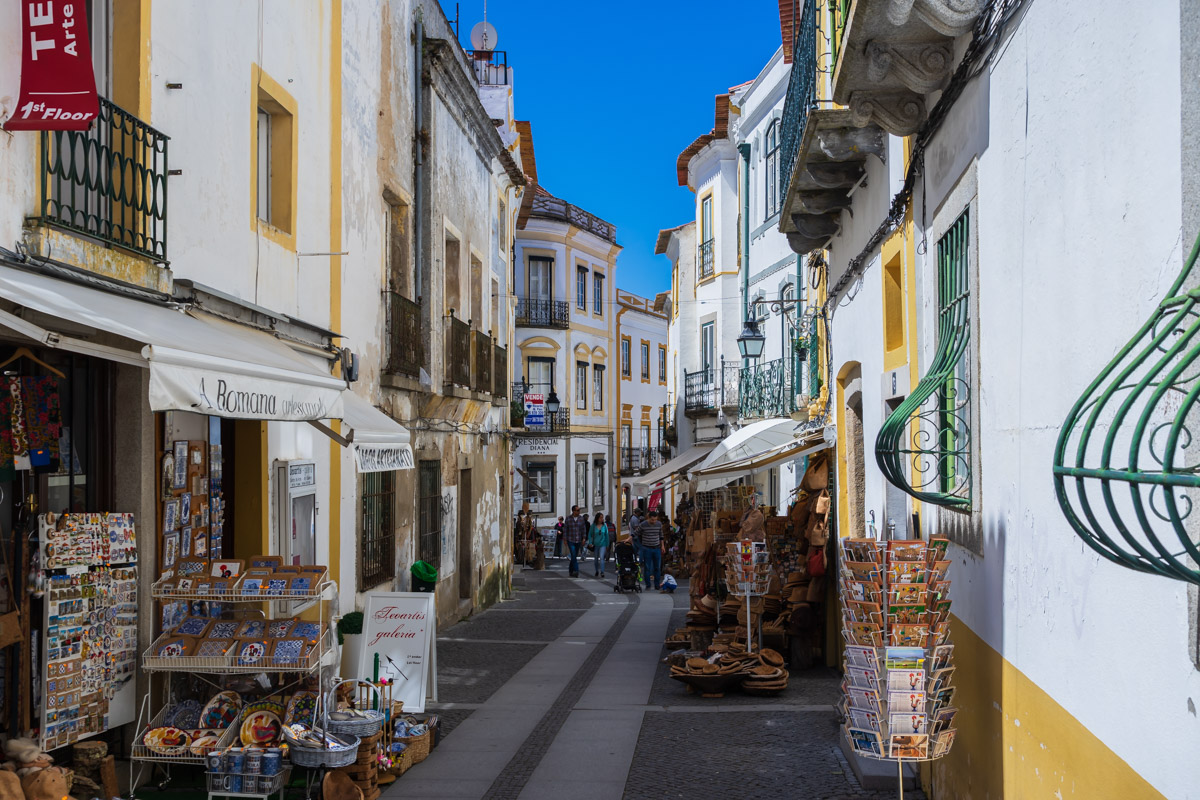 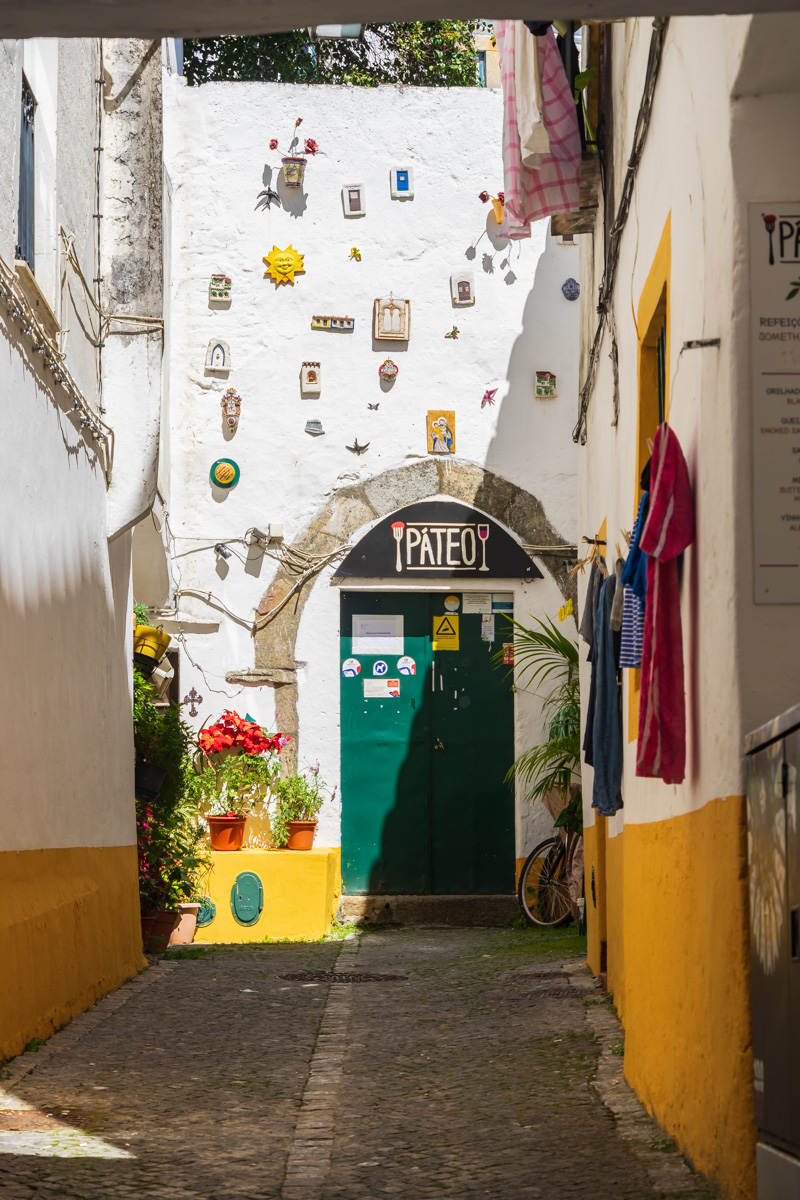 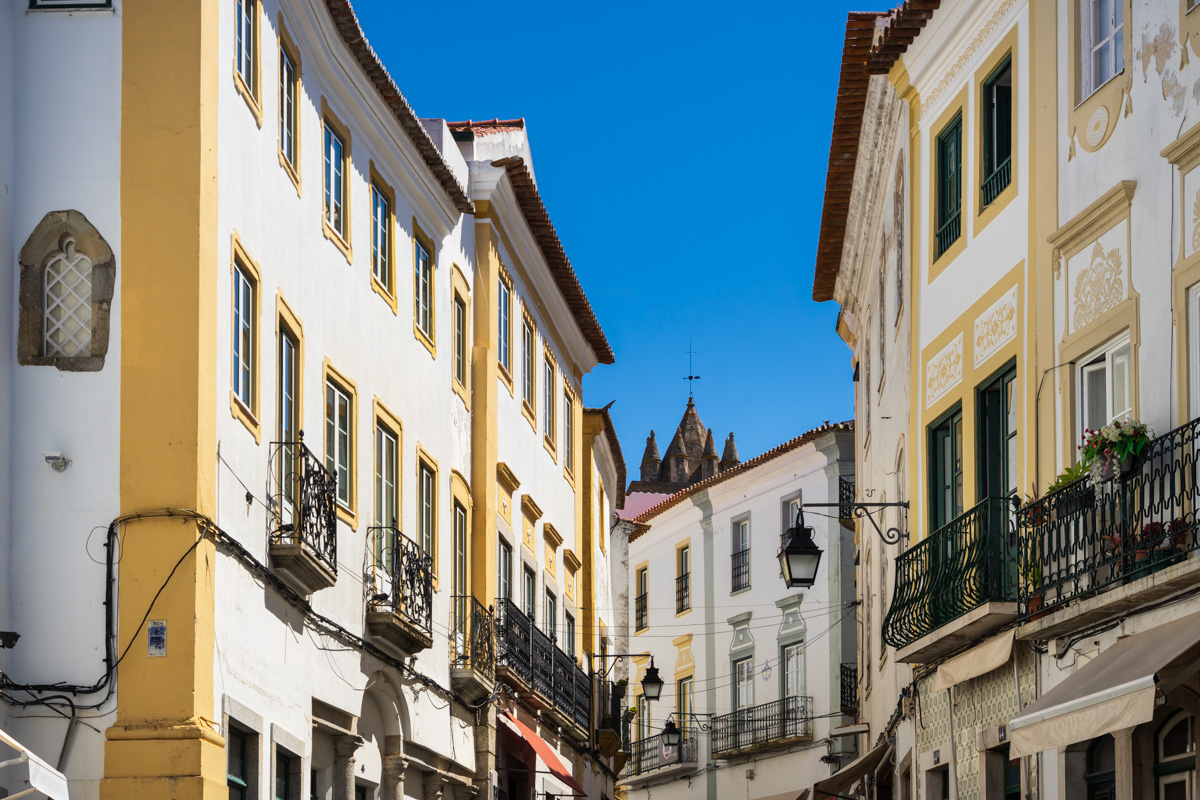 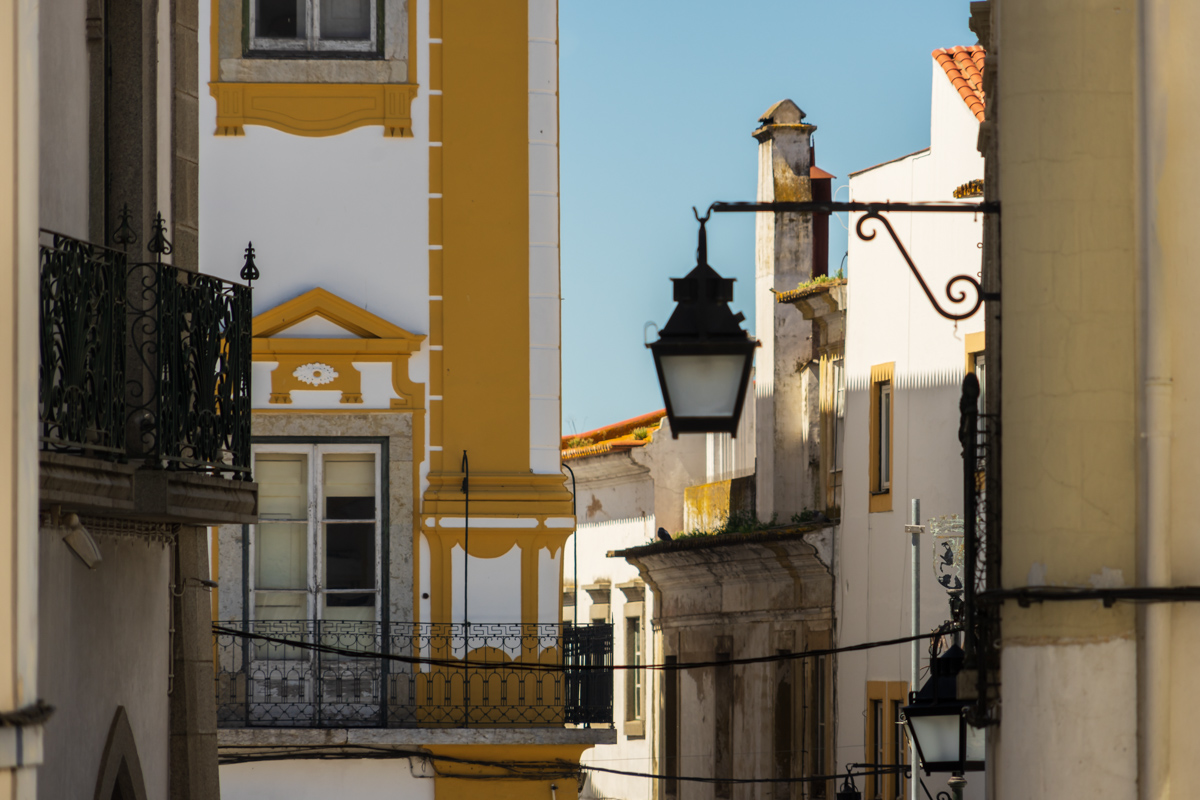 One other major point of interest in Évora is the church of São Francisco, whose several components include the mildly distressing in its impeccable design Bone Chapel. 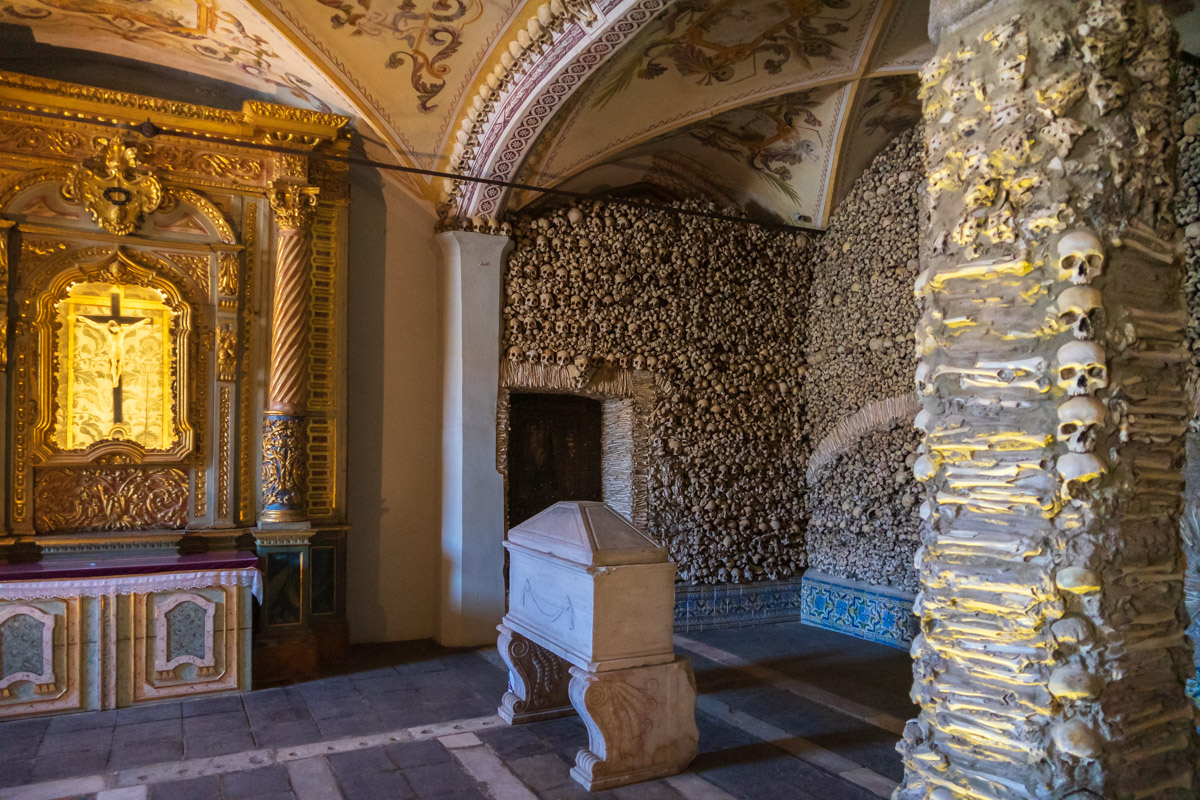 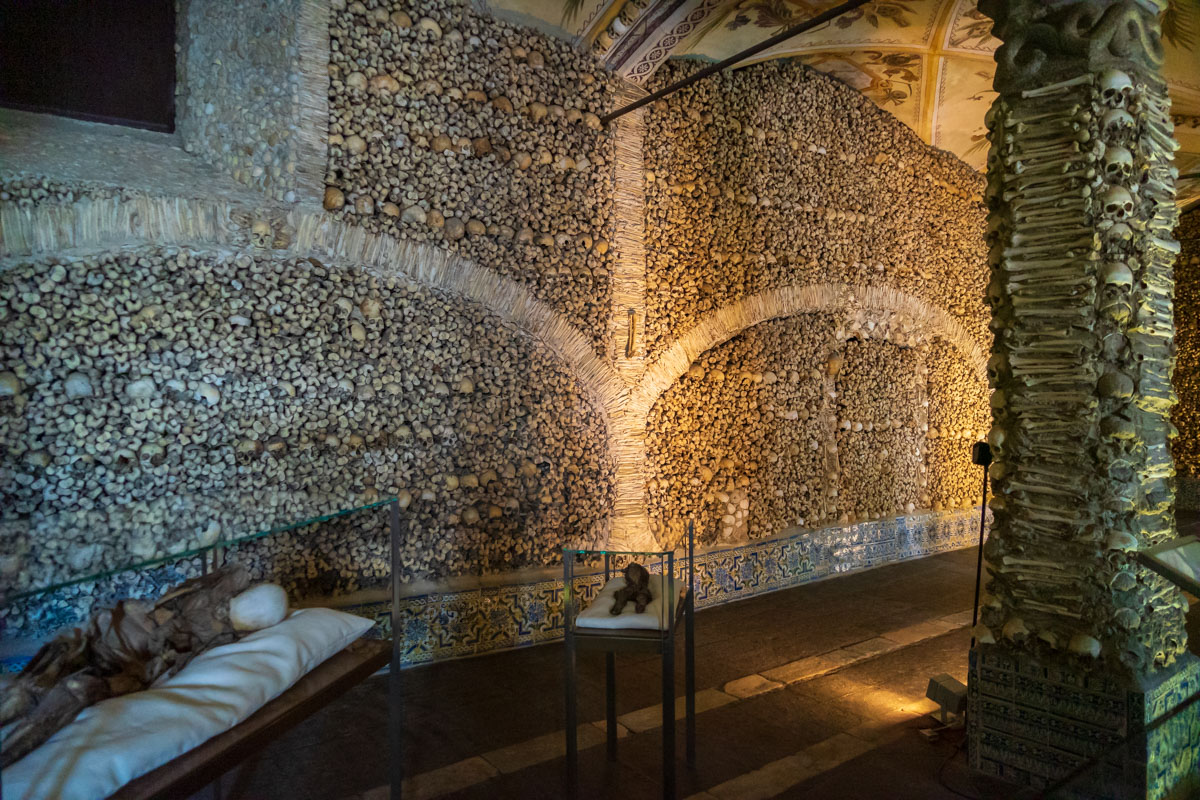 There is a plaque in the center of the chapel that attempts to explain that the purpose of this space was not necessarily to shock but rather to prompt people to think about and accept their own mortality. Your mileage may vary. 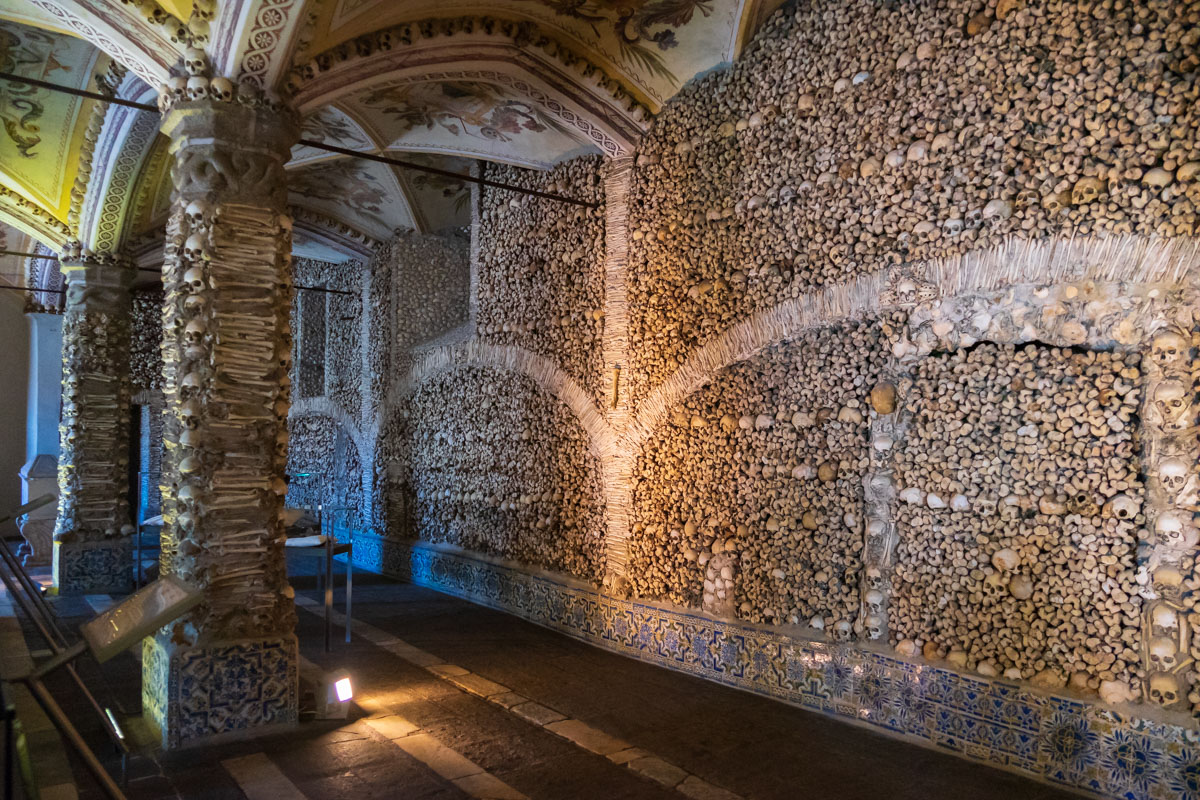 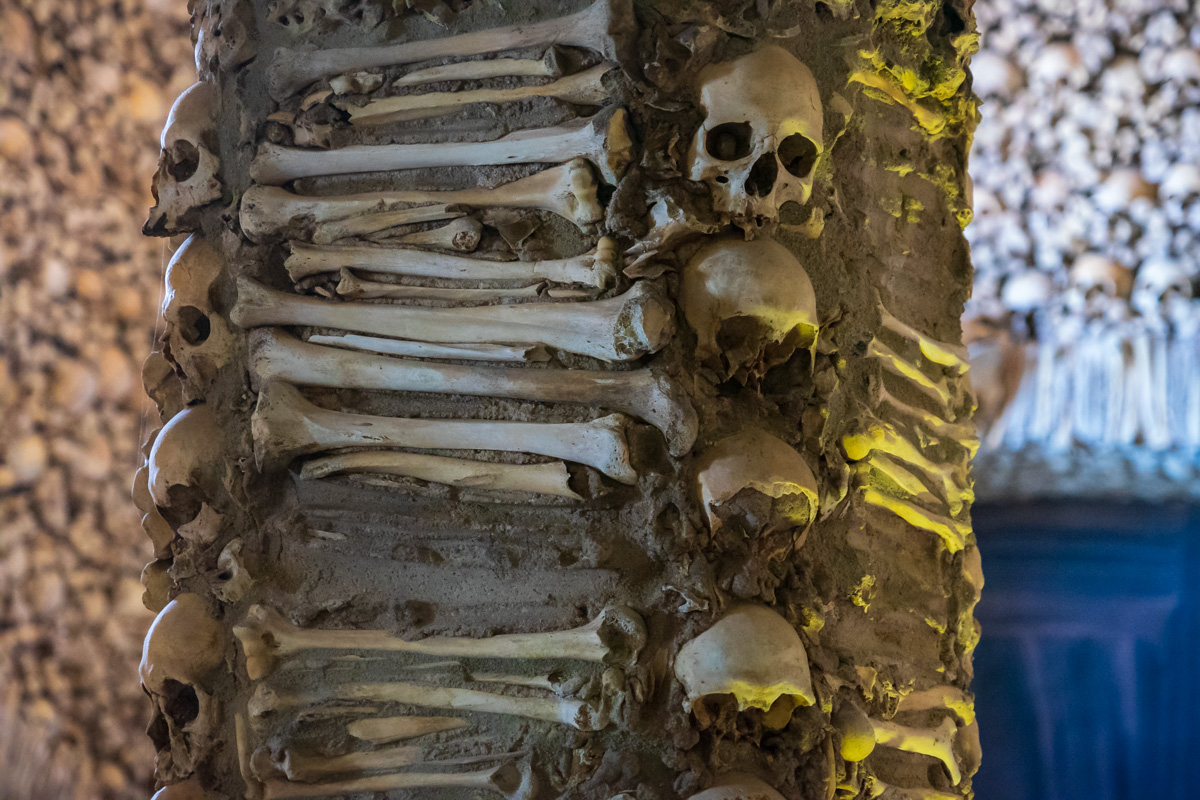 Entrance to the chapel is combined with a collection of nativity scene sets. Specific subject matter aside, the gallery is like a toy museum that is bound to impress kids, if you have them in tow. 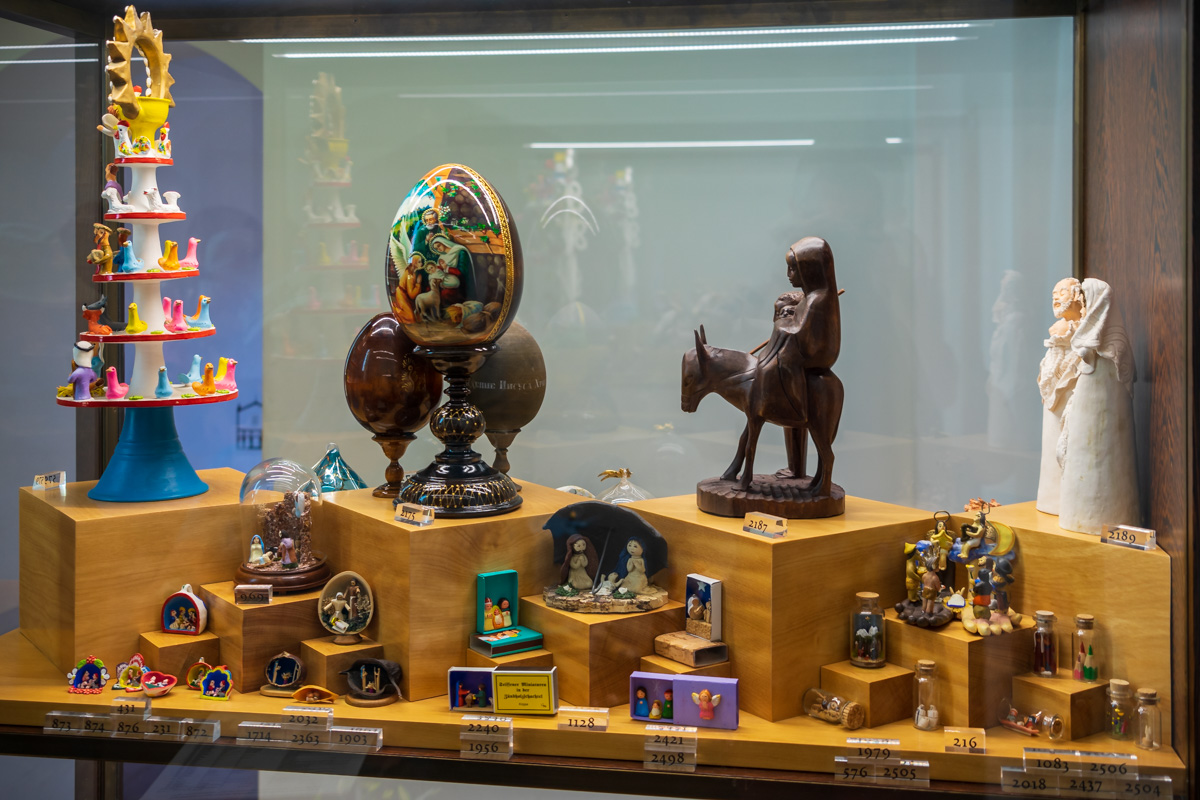 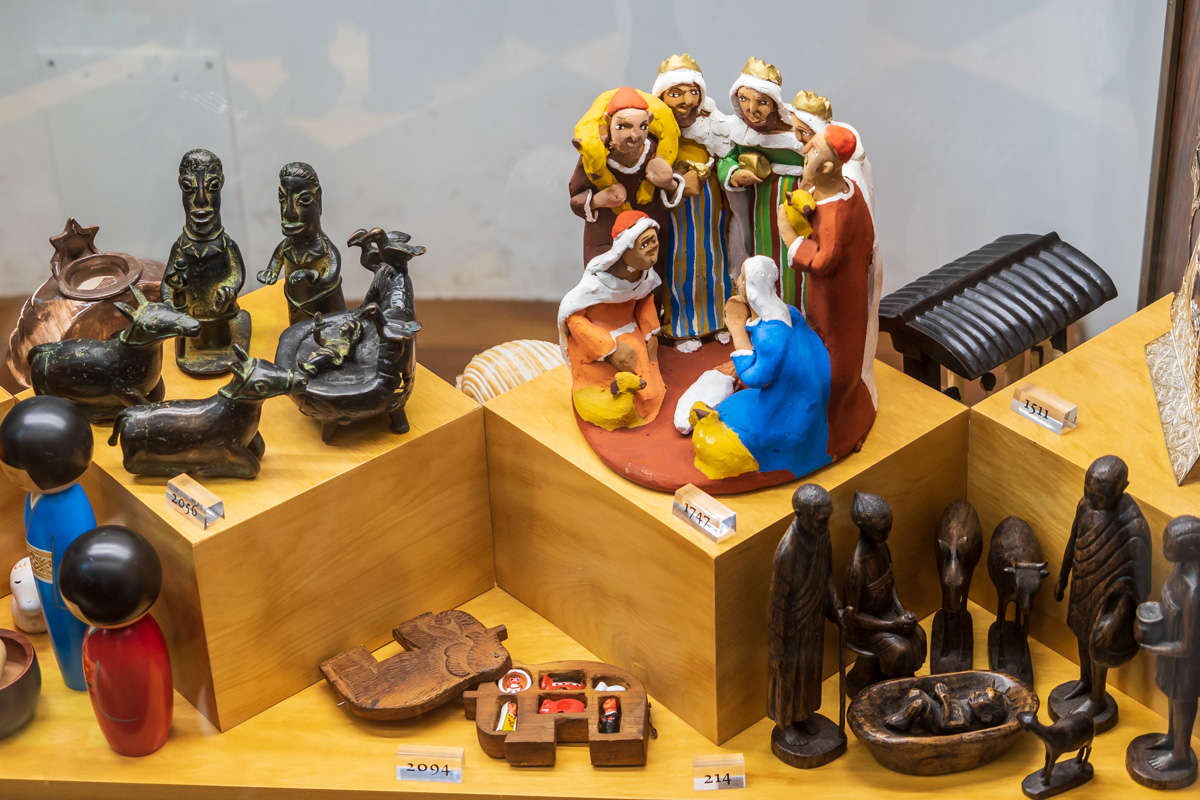 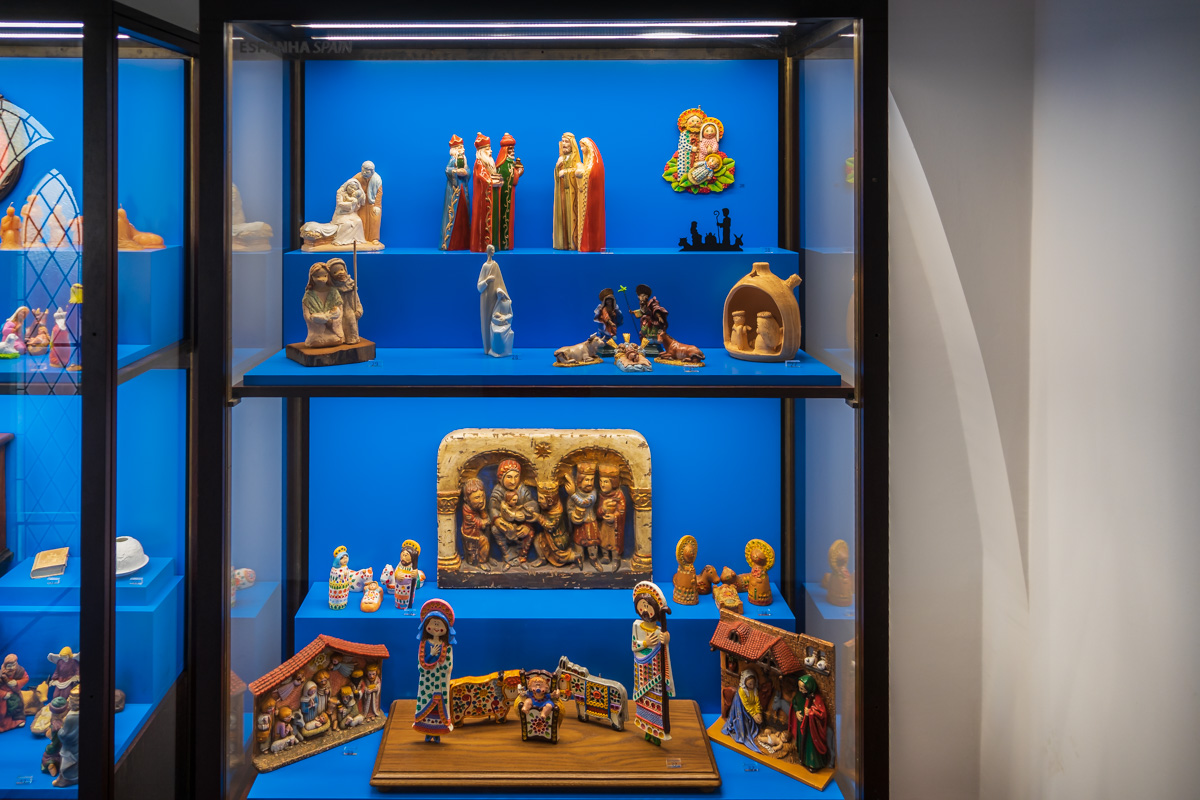 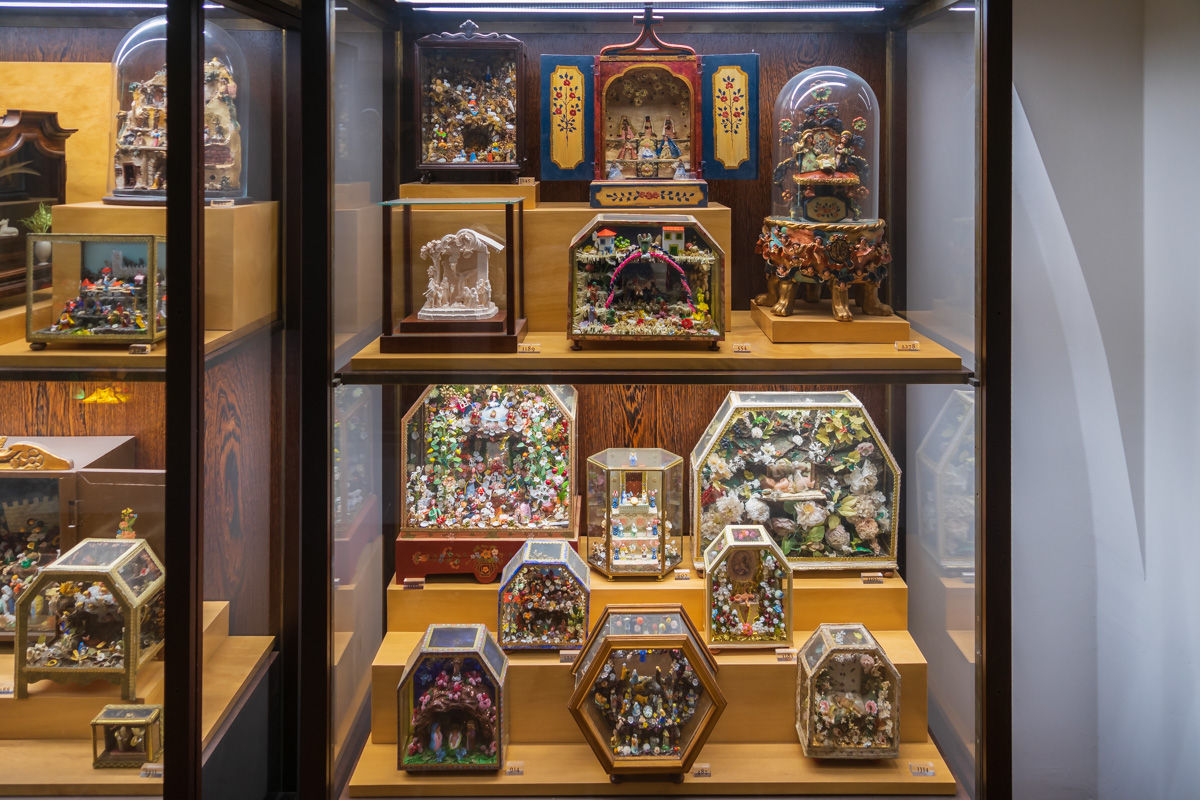 The interior of São Francisco proper (which can be entered for free) is among the most impressive that we’ve seen in Portugal, which is not a praise we dispense lightly, given that lavish church interiors are close to the norm in this largely Catholic country. 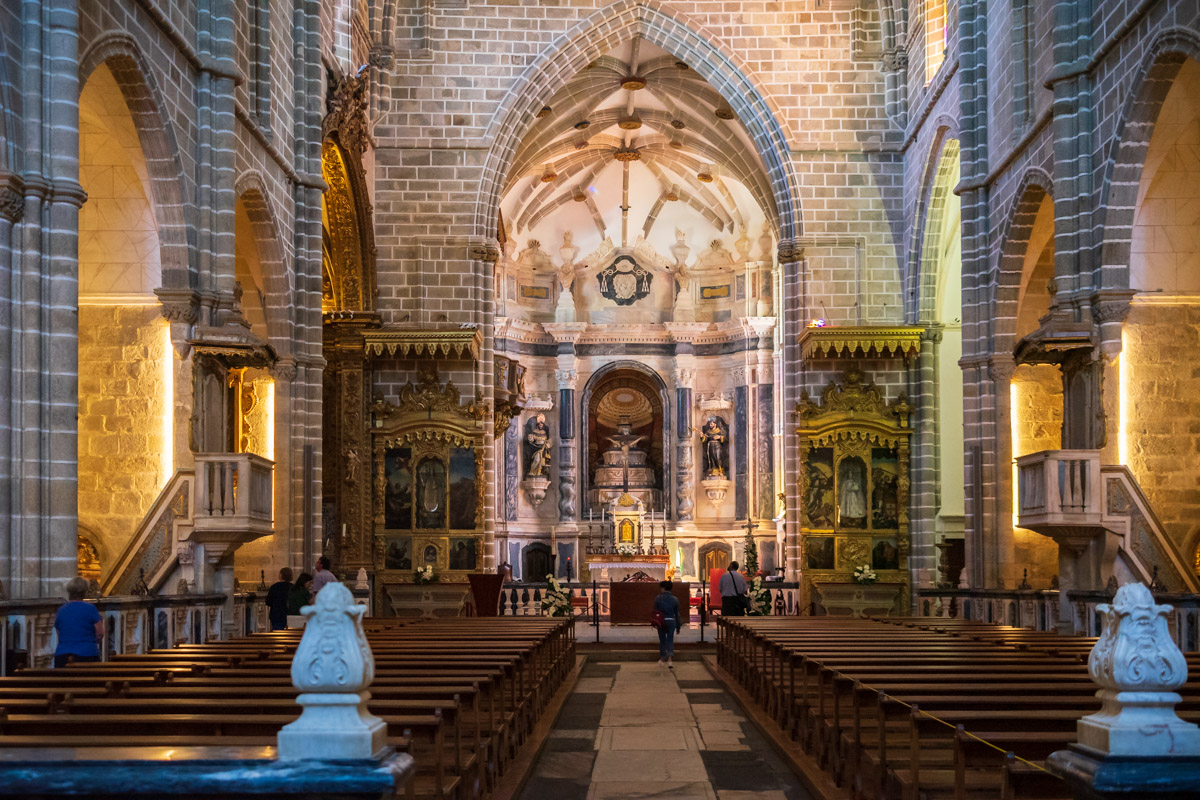 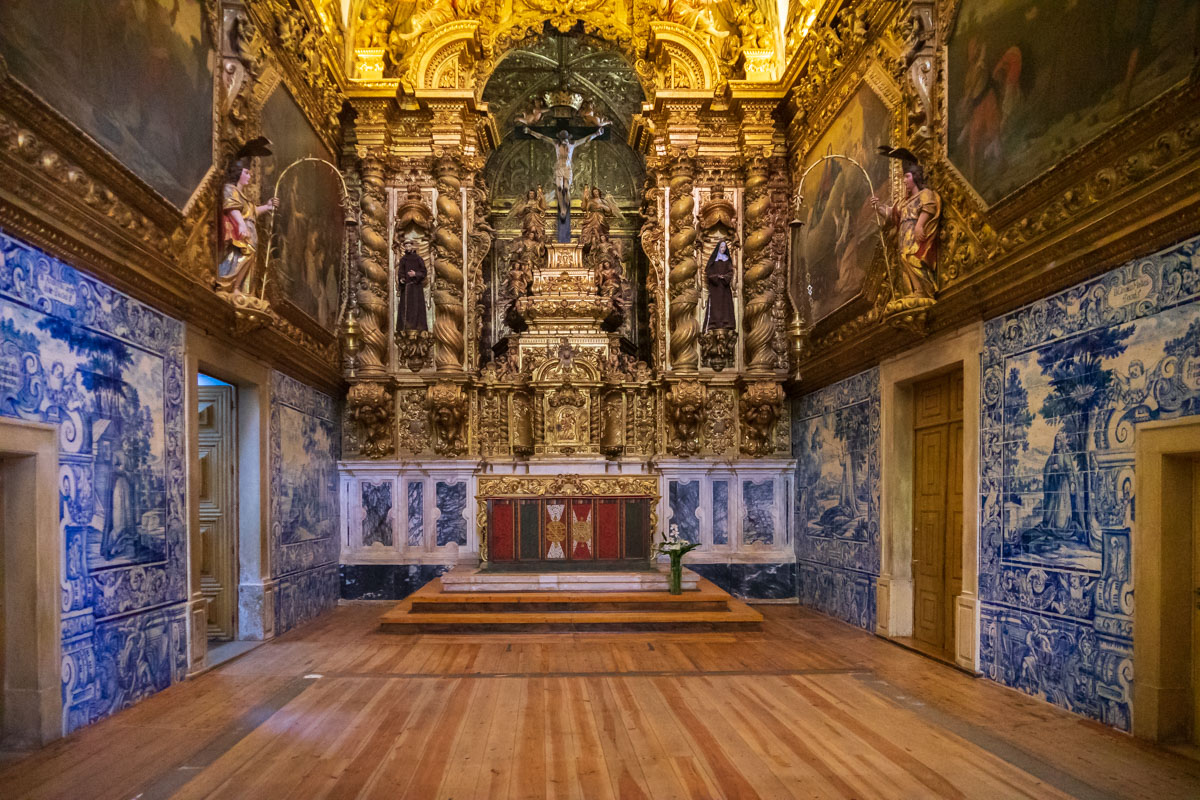 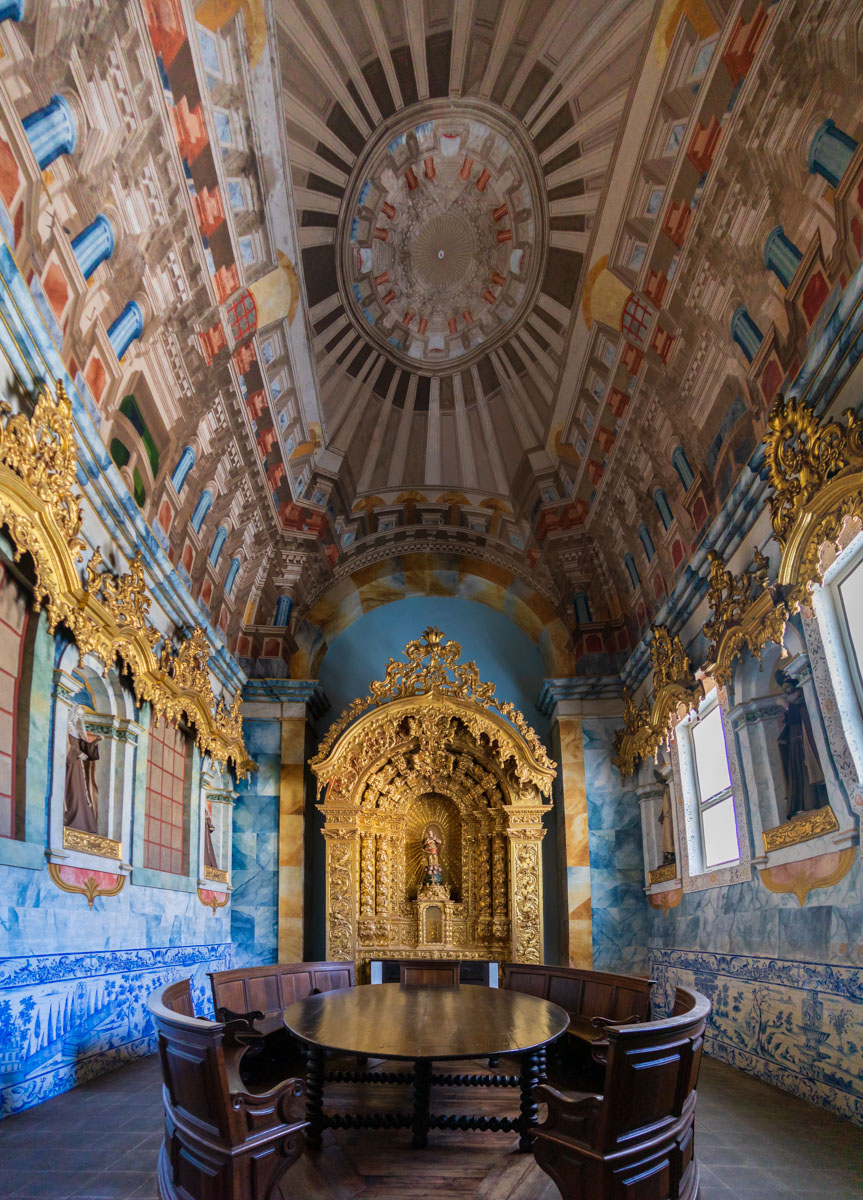 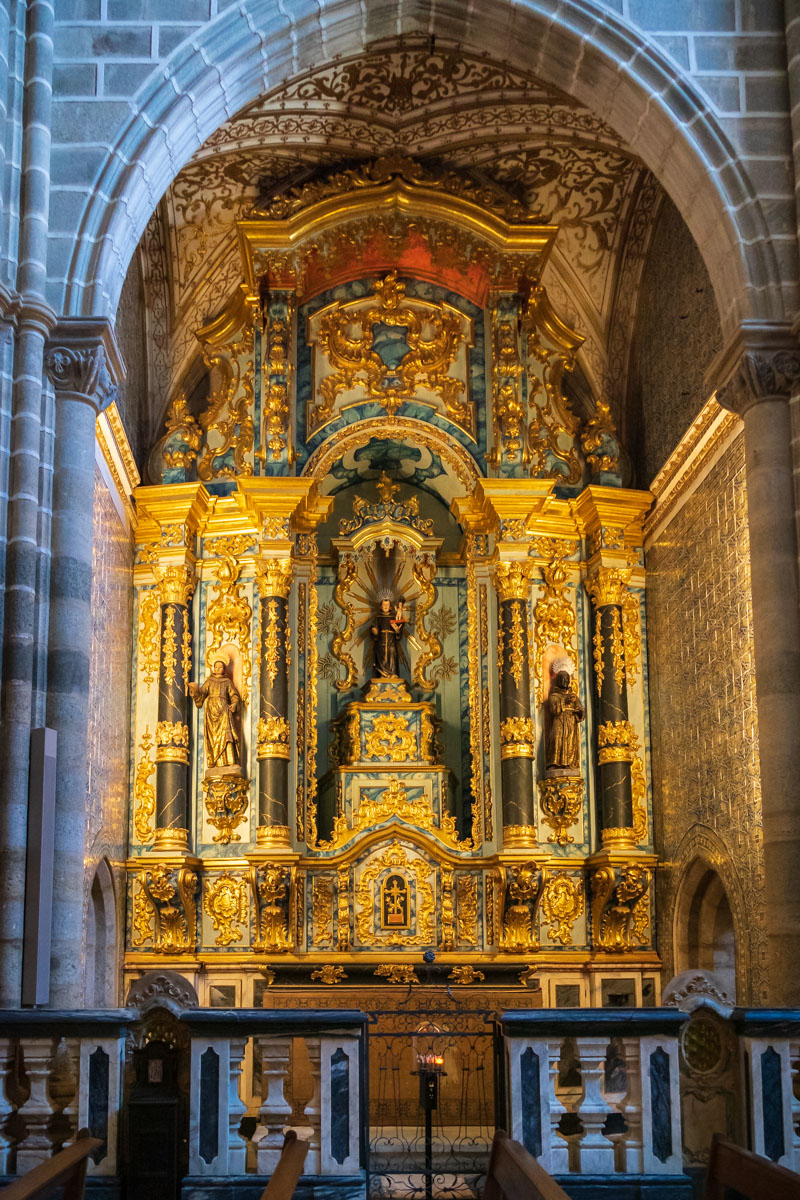 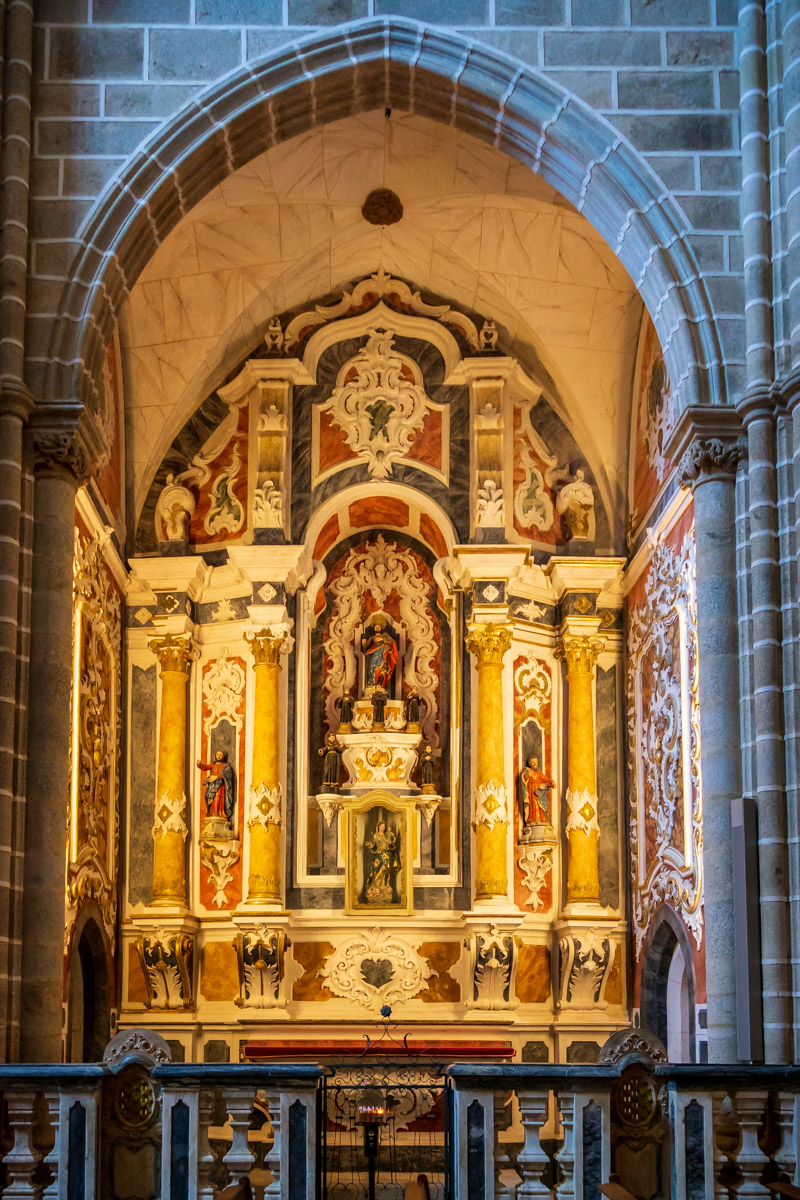 Évora is about an hour and a half due east from Lisbon by car. We spent a little over half a day there, which feels like the right amount of time to get acquainted with the city.