The city of Braga did not make the final cut of our Portugal itinerary aside from one single sight on the outskirts of the town.

The sanctuary of Bom Jesus do Monte is comparatively young for a religious site – the pilgrimage church dates only from the 17th century, and the current ensemble was fully established less than 200 years ago. This ensemble, especially the Baroque stairway leading up to the main church, features in many travelogues of Northern Portugal as a wonder to behold. So, we fit an early-morning stop at the church into our schedule for one of the days in the area.

Of course, my well-documented pursuit of World Heritage sites played a role in pushing Bom Jesus to the top. It is up for enshrinement this year. The World Heritage committee meets in July, and if Bom Jesus do Monte is inscribed then, it will chronologically be the 124th site on my list. Except, at the present moment it is not inscribed yet, and number 124 is, therefore, already taken by Guimarães, an already fully recognized WH site that we visited later the same day. That gives me considerable anxiety given my mild OCD when it comes to keeping things orderly: Do I reorder the list when a past visit becomes an inscribed site? Do I append it at the end and ignore the chronological timing of the visit?… I got issues, I know!

In any case, here is the main part of the stairway. 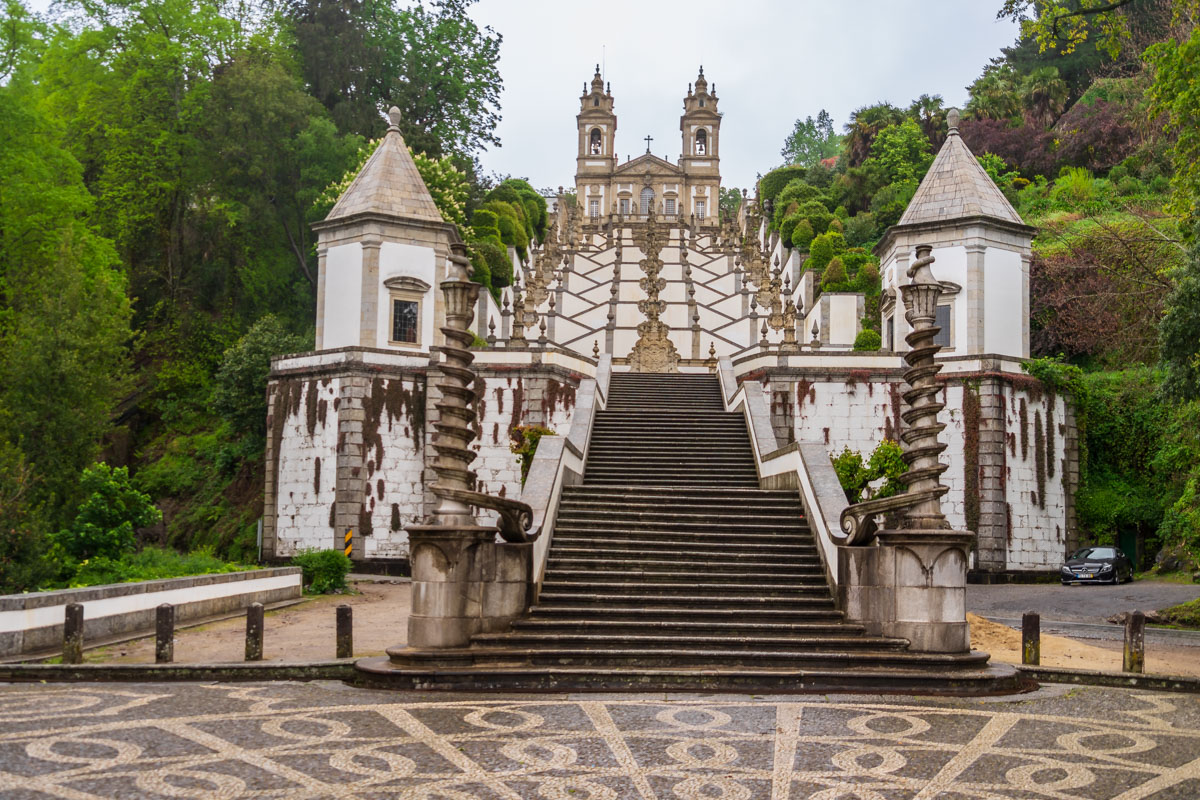 It is a truly impressive sight, even under rainy skies. As a non-believer, I can only guess the impact it must have on the actual pilgrims, who are encouraged to make the ascent on their knees.

The total number of steps from the parking lot at the foot of the hill to the church floor is 582 by our count. At the landing in the shot above, we already walked up over half of that total along the park-like lower portion of the climb.

And now 50 steps closer, at the start of the gorgeous symmetrical zigzag stairway. 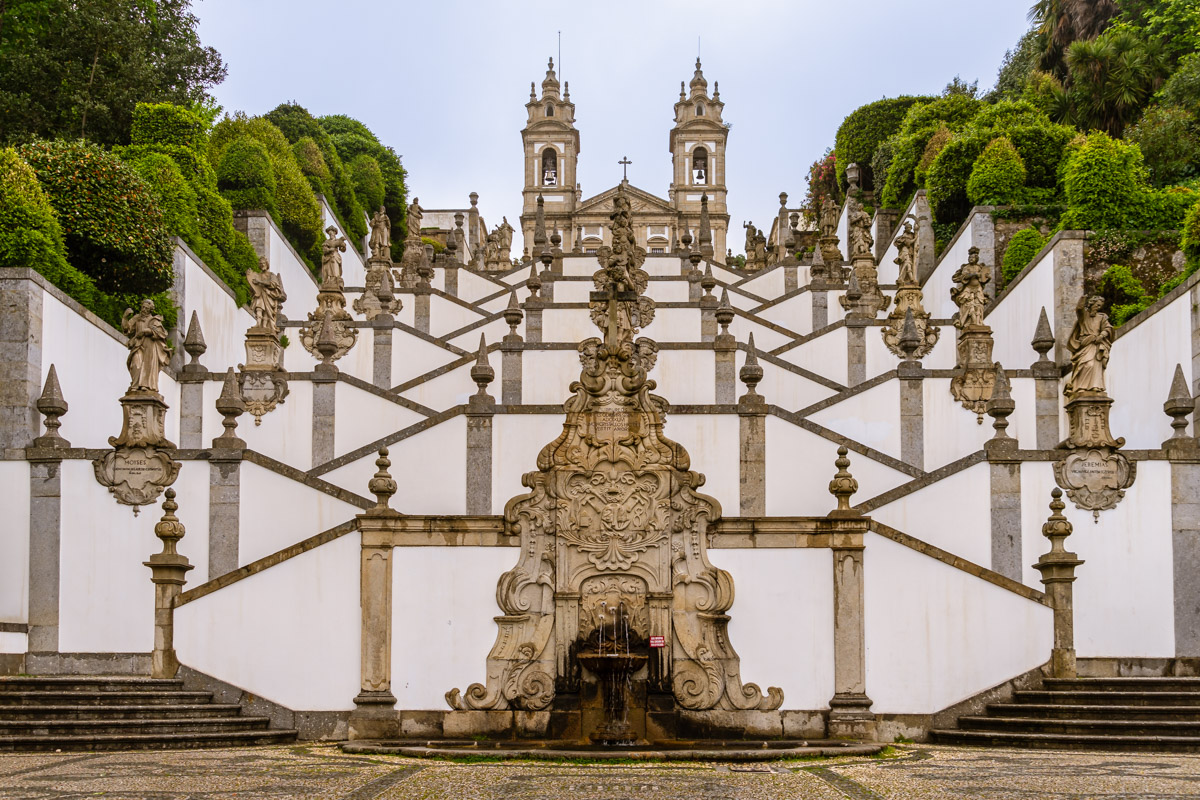 The penultimate landing under the church. 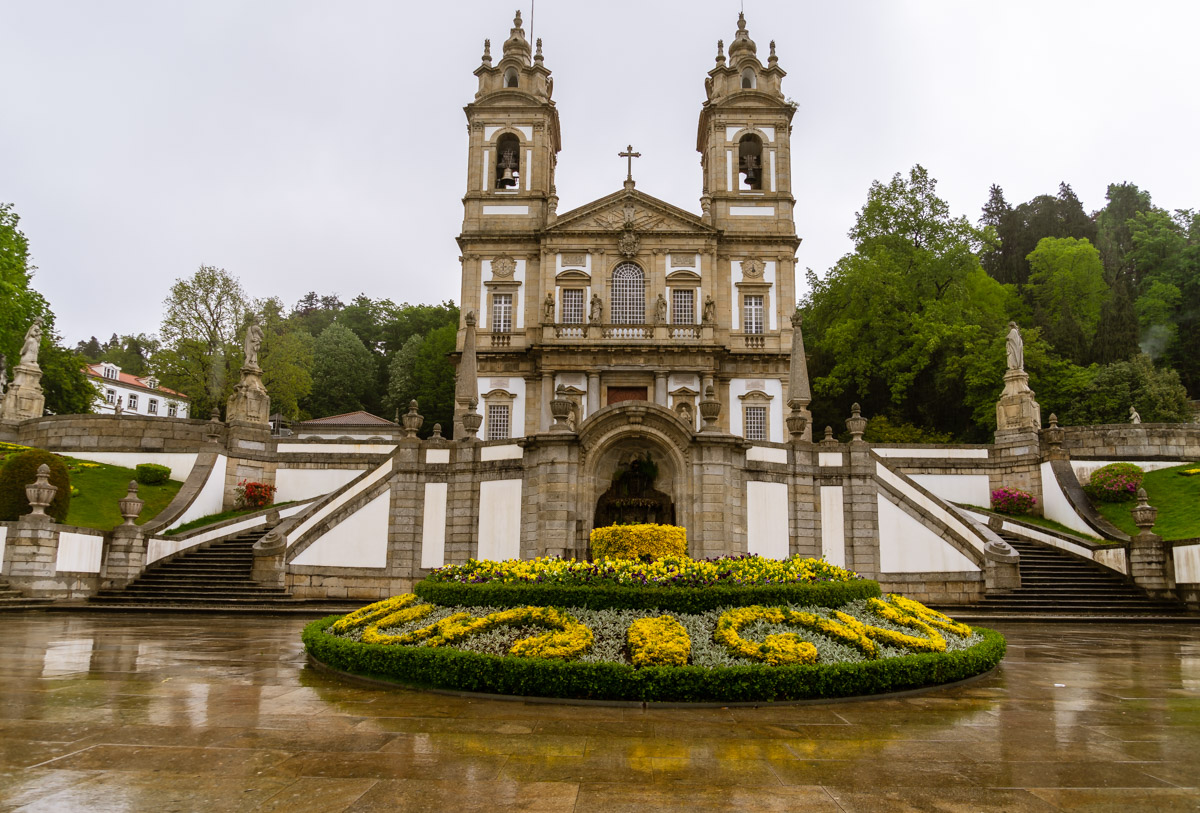 The vibrant interior is headlined by the altar, uncommonly designed as a diorama. 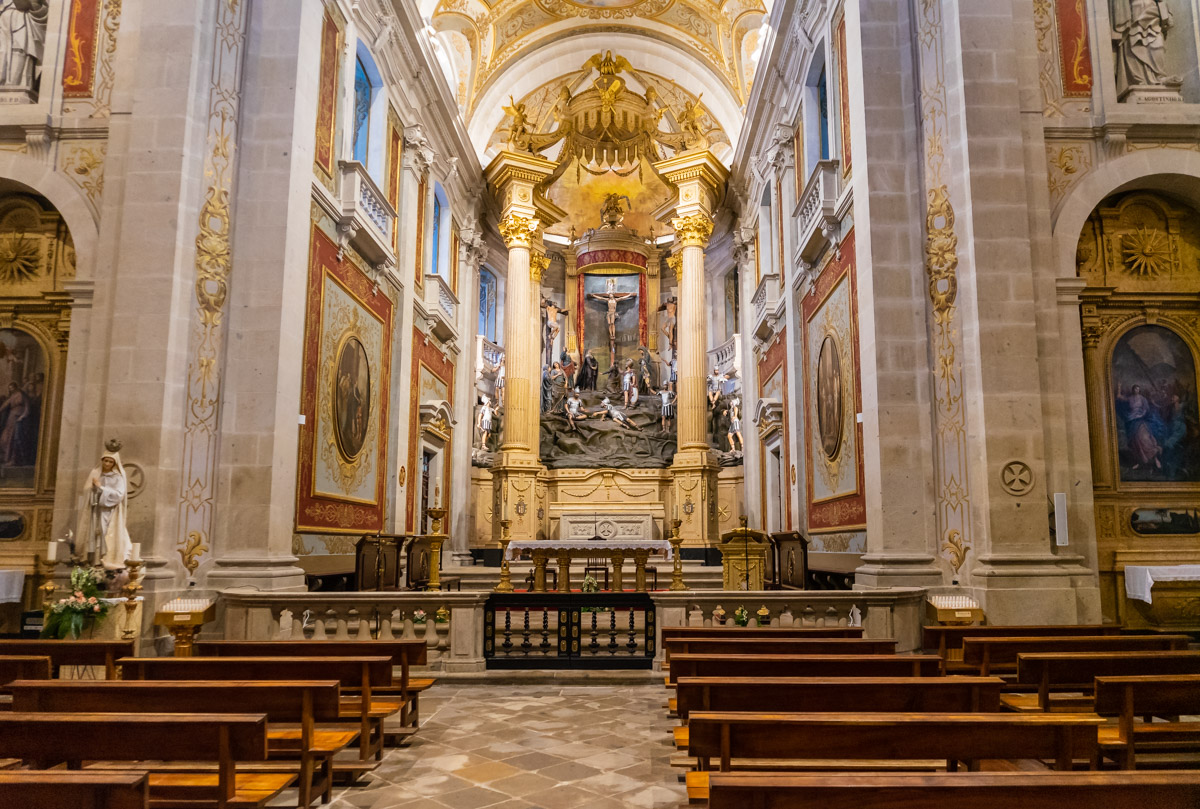 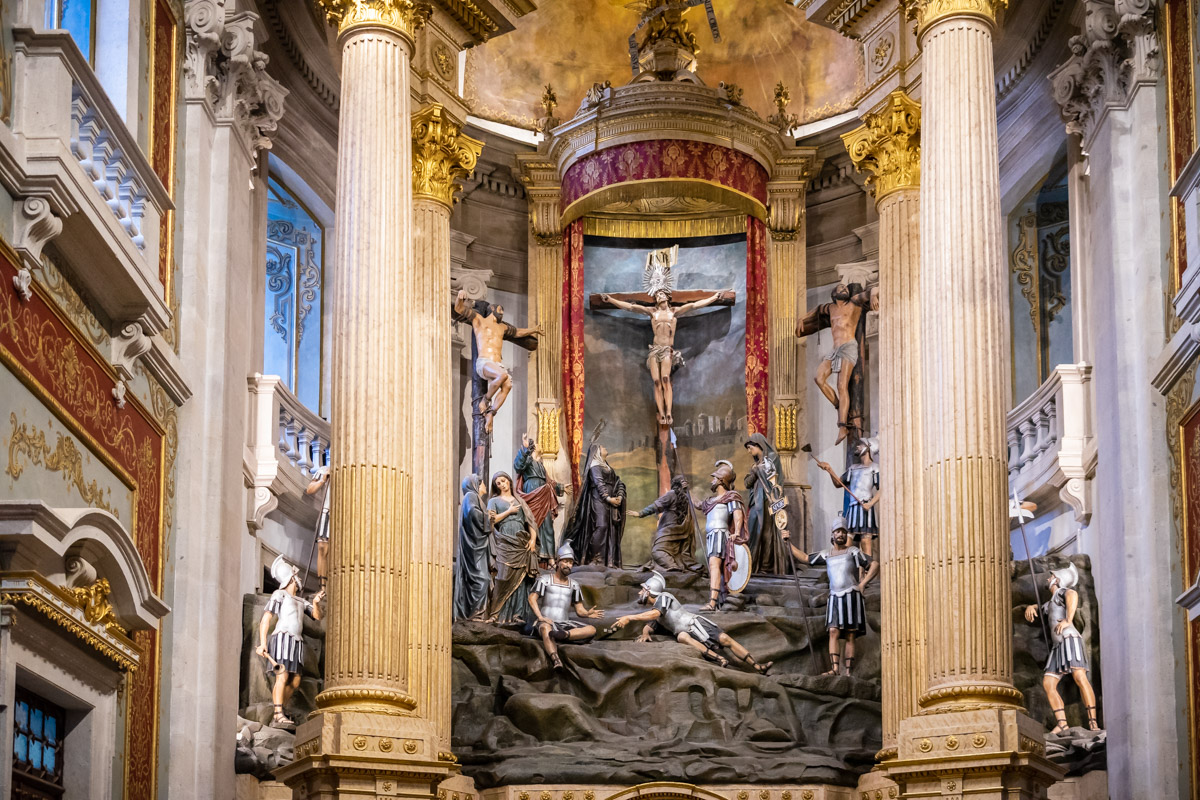 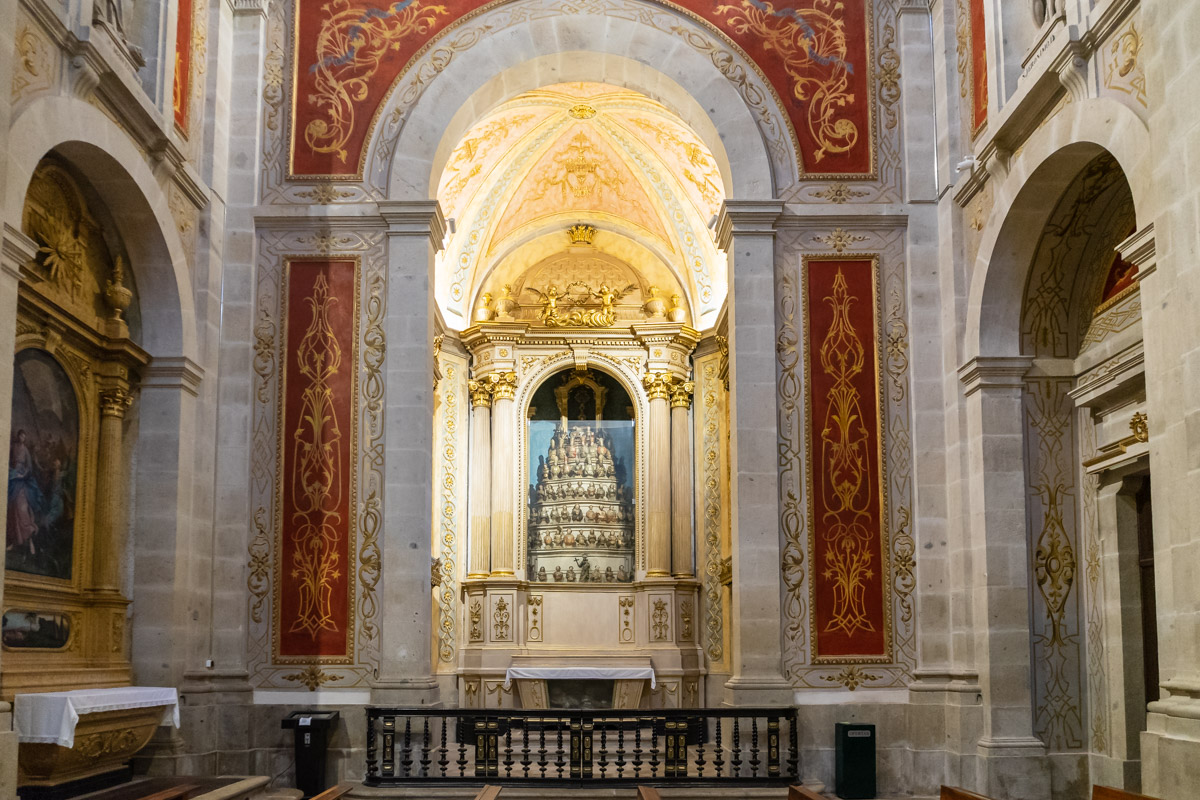 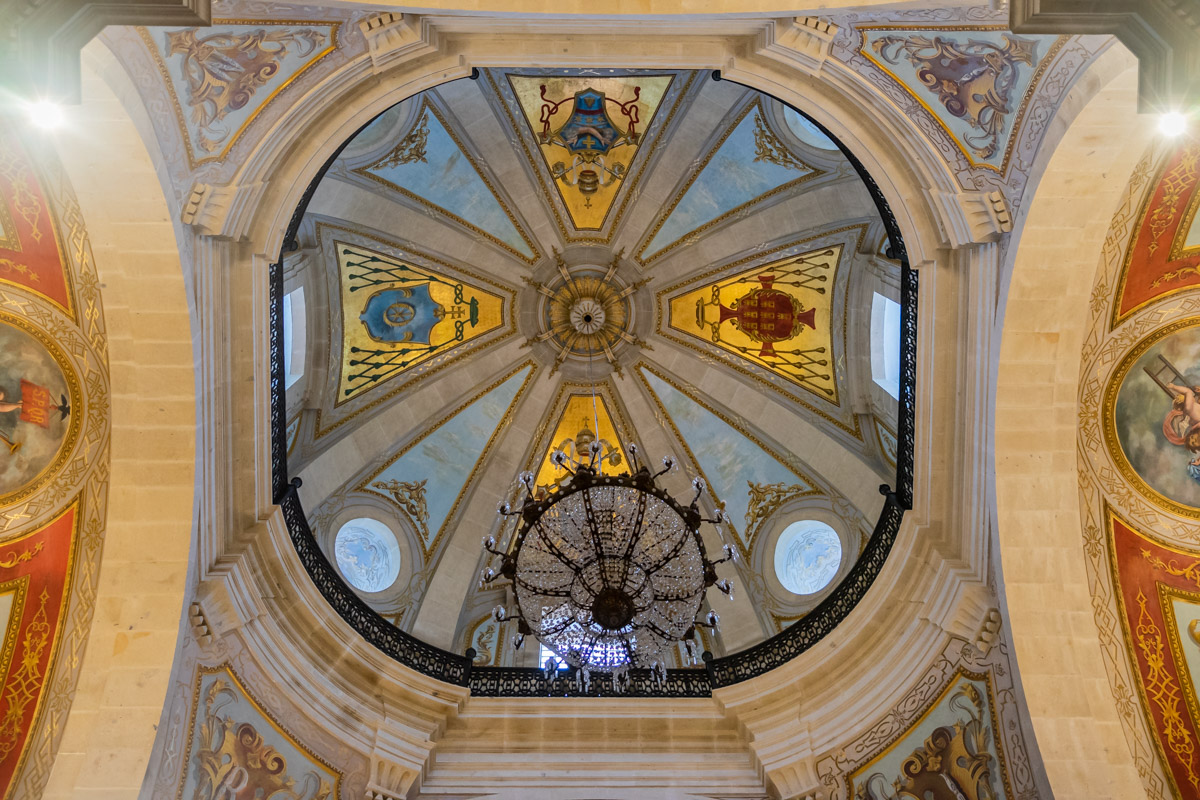 Half of the church interior was covered in scaffolding due to renovation work. I imagine the final outcome of that will be entirely jaw-dropping.

Bom Jesus do Monte can be reached in about 45 minutes from Porto by car. Our visit, including climbing the entire 582 steps up, spending a bit of time in the church, and then descending back down lasted under an hour. In good weather, I suspect we would have lingered on the various landings of the staircase a bit longer. For those who do not want to or cannot climb the steps, a funicular provides an alternative, but it has a limited schedule. You could also attempt to drive up the hill and park closer to the church. If you choose either of these less-taxing options, you owe it to yourself to walk down and then back up at least 100 or so steps, or you’ll miss the main part of the attraction.