Coimbra is the fourth-largest city in Portugal, and its former capital for a bit over a century quite a few centuries ago. As any city over a thousand years old, it is not without charms, but on balance it falls short of making an exceptional impression. It is nice, but no more than that.

It does, however, have a claim to fame that puts a visit here high on the agenda for a traveling itinerary in Portugal. Coimbra University, founded in 1290, is the oldest institution of higher learning in the Portuguese-speaking world. It is recognized as a World Heritage site for being an example of an integrated university city. The hilltop part of the university – called Alta – as well as the historic center of town have a number of points of interest worth seeing.

Starting with the open expanse of Pátio das Escolas, the focal point of the old university. 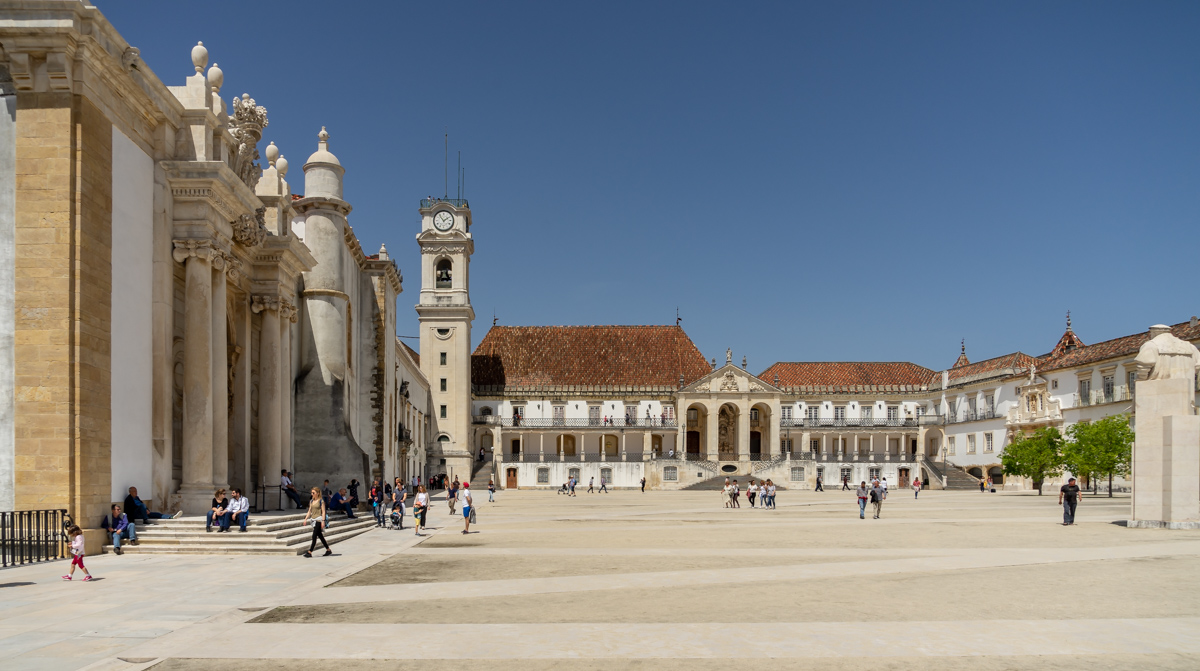 Among the buildings on the plaza are the Royal Palace, the main university chapel of Saõ Miguel, and the university library.

Porta Férrea, the Iron Gate, is a 17th century embellishment of the complex, and the main entrance to the university core. 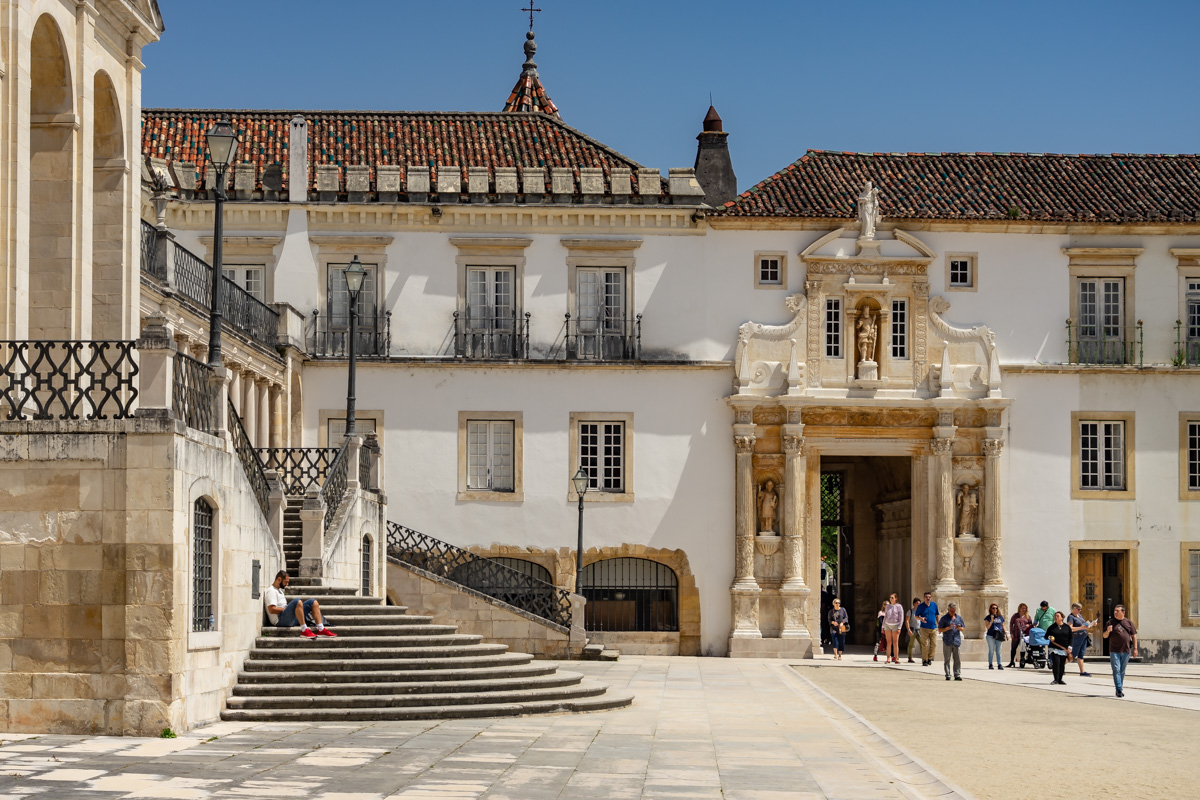 Here is a perspective onto Pátio das Escolas from the upper platform of the University Tower. 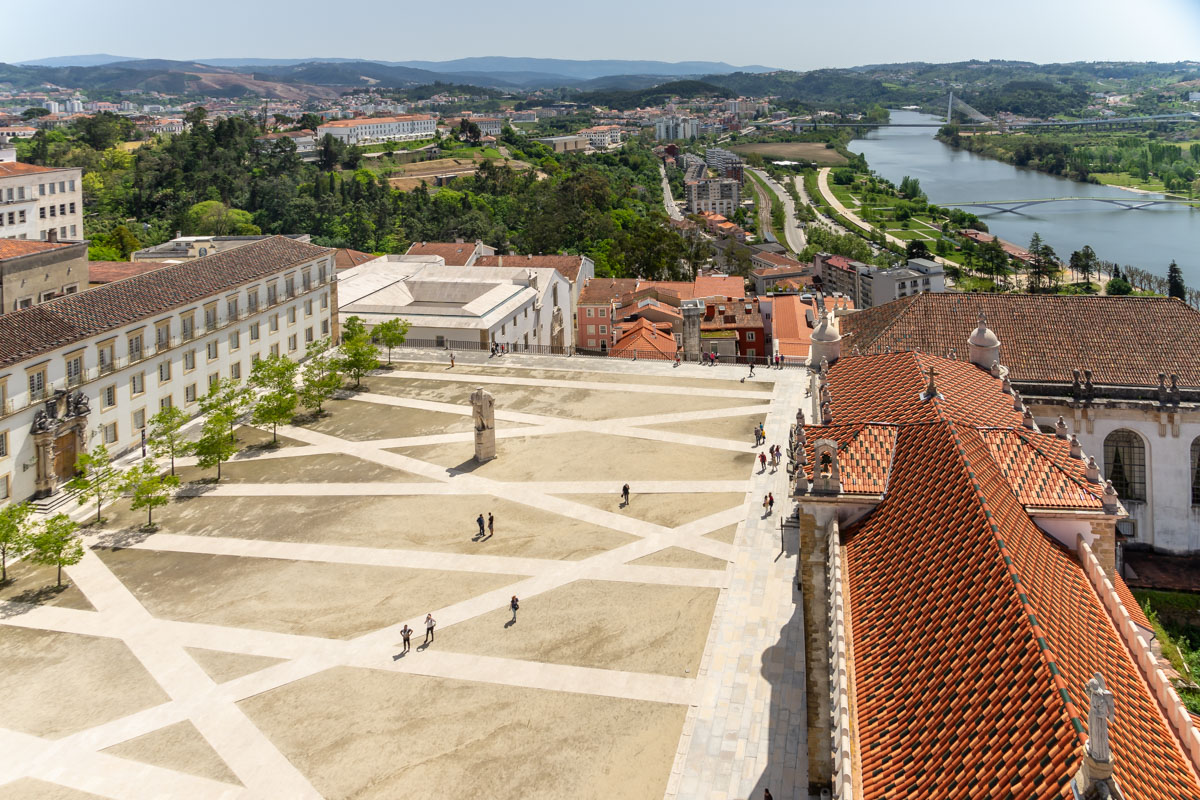 The monument in the middle of the square is to João III, the 16th century king who greatly expanded the Portuguese possessions abroad as well as made Coimbra into a leading center of learning by establishing a college of liberal arts and bringing to it many of the Portuguese scholars of the time.

The views of Coimbra from the highest point that is the University Tower are no more than ok. Probably the only sight that truly attracts the eye from that vantage point is the fountain on the Mondego River. 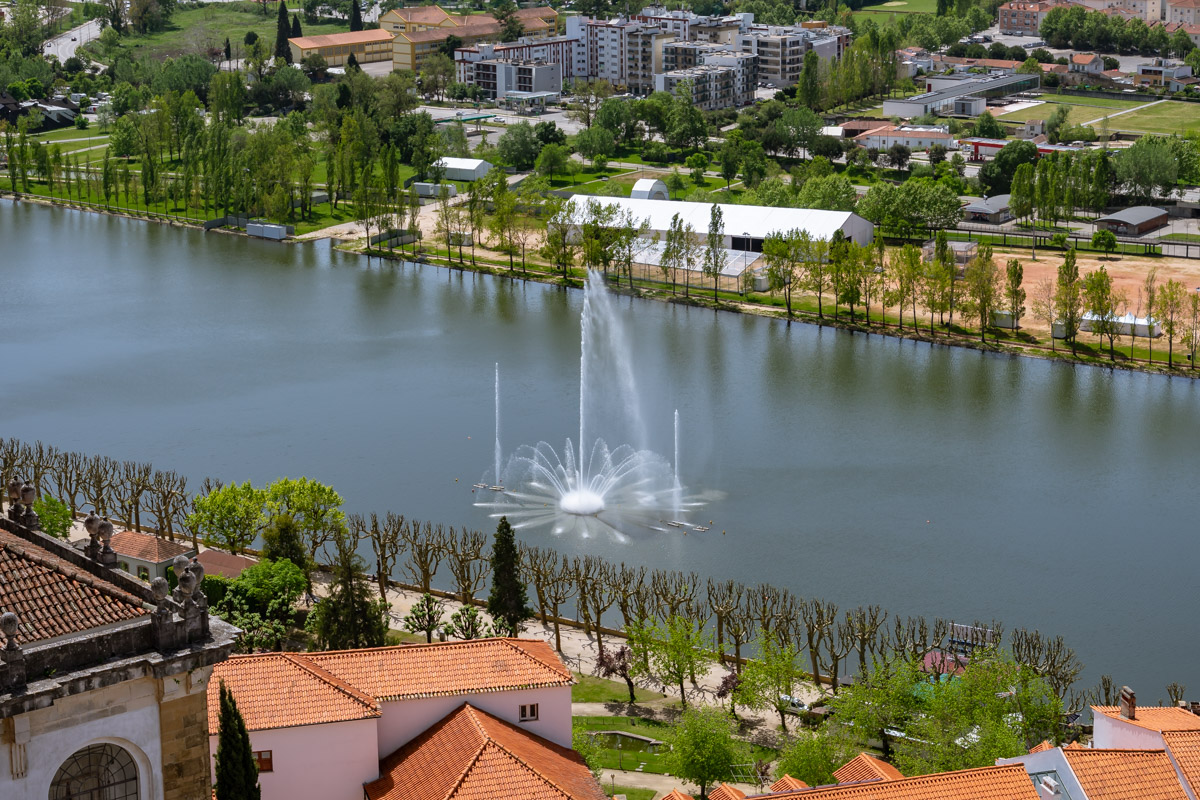 The Royal Palace housed the core university spaces from the reign of João III onward. There are a few impressive rooms inside, of which the most impressive might be the Great Hall of Acts. 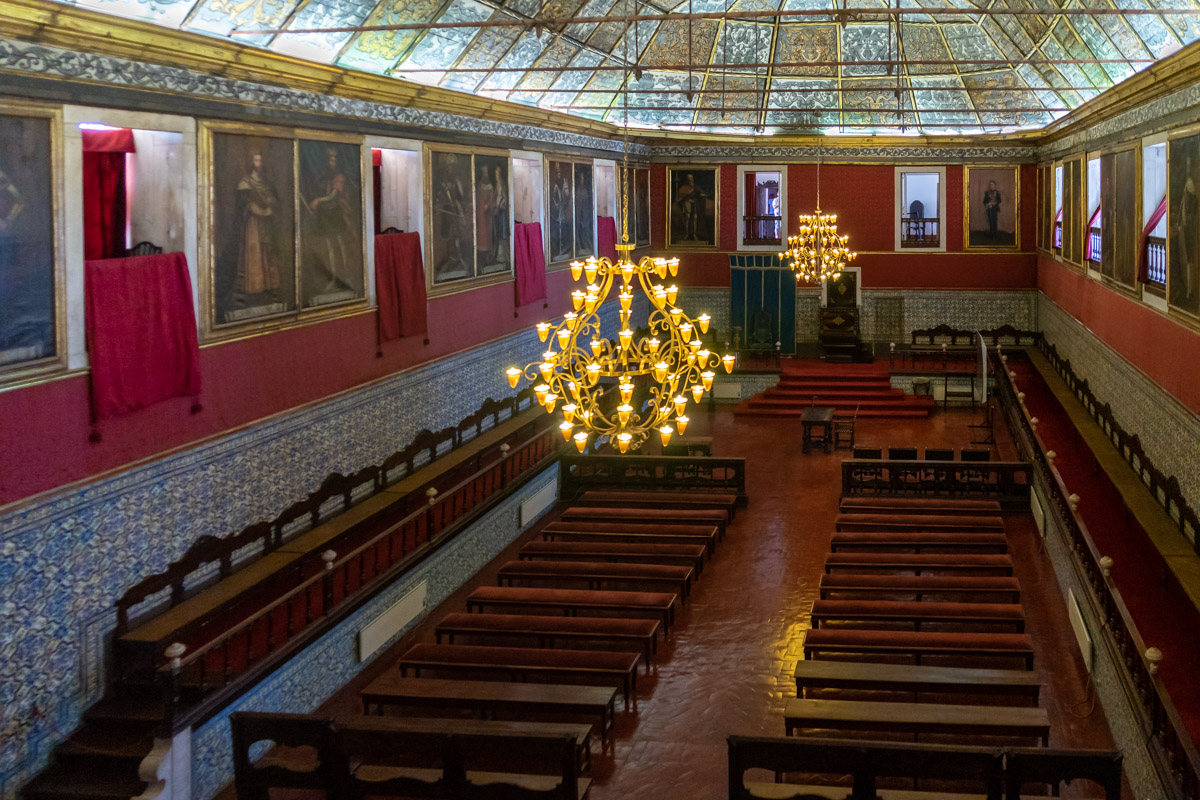 The Chapel of Saint Michael, in the west wing of the architectural ensemble of the plaza, is incredibly tiled and decorated. 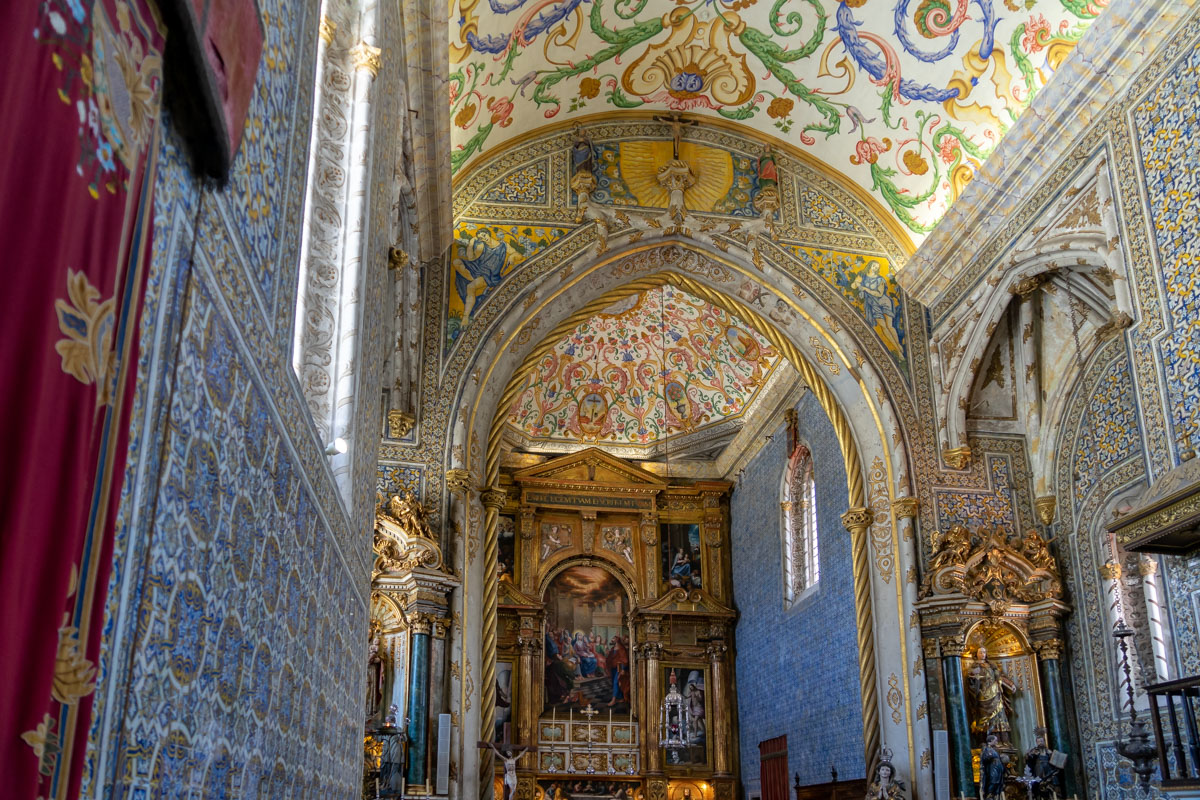 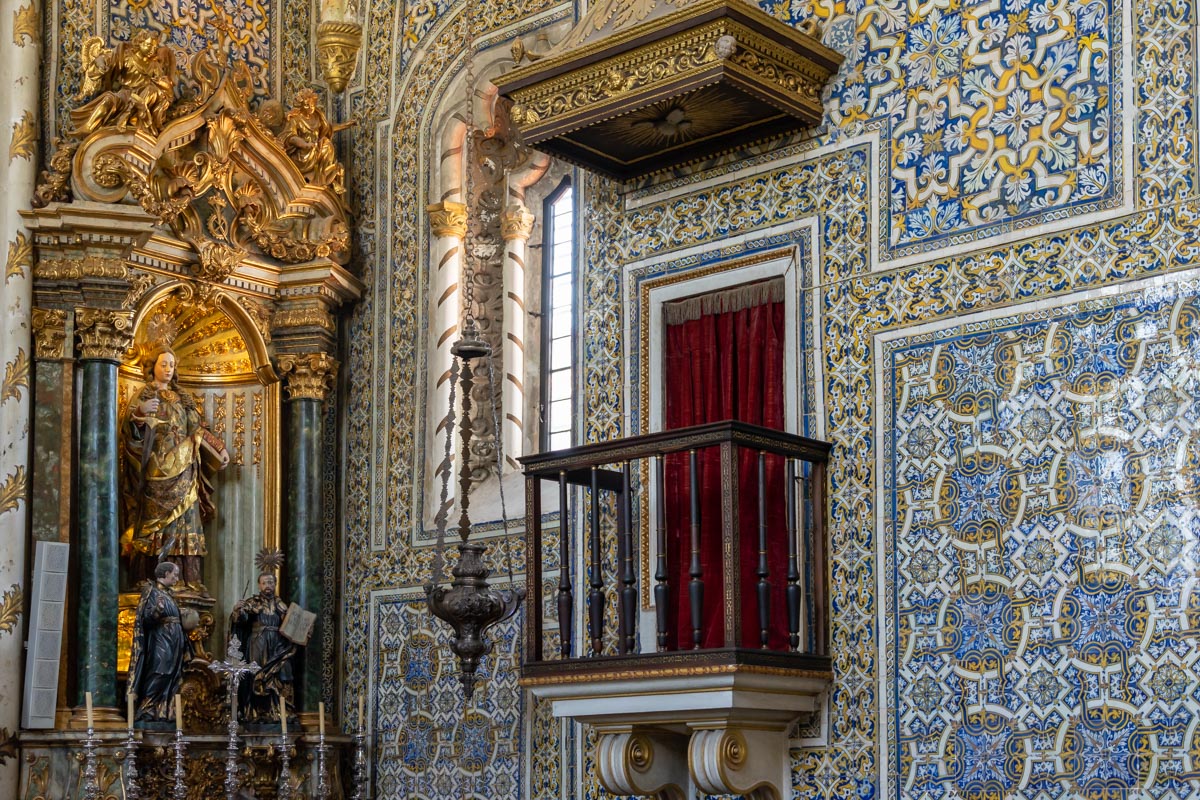 The biggest jewel in the university complex is the Biblioteca Joanina. It takes effort to see – entry is at timed intervals and advance ticket sales do not exist to my knowledge – but it is certainly worth it, being an incredible masterpiece of both the art and the pursuit of knowledge. Unfortunately, you will have to trust me on that, since photography on the Noble Floor is not permitted. Or you can click on this to see the official pictures.

Coimbra has two cathedrals close to the university core. The cloisters of the Old Cathedral immediately reminded us of the just-seen cloisters at Alcobaça. Consider the unique designs of the rose windows above the arches or the column capitals. 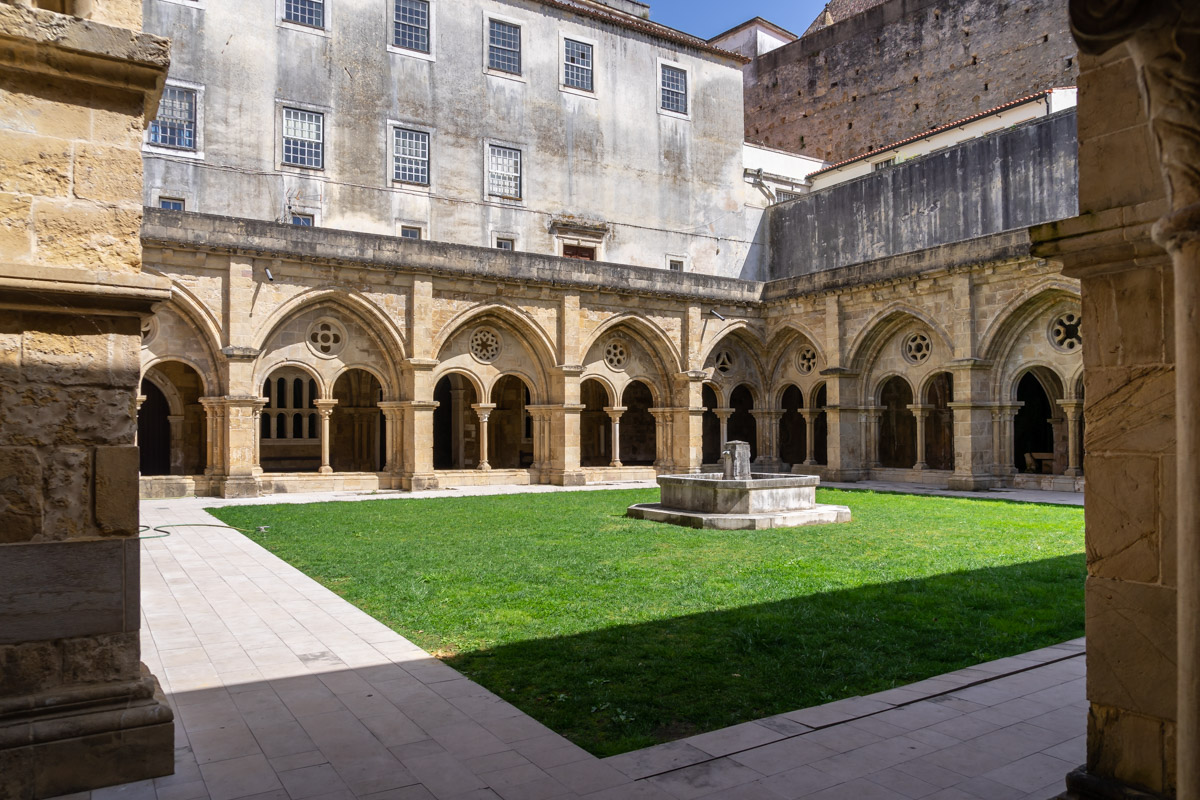 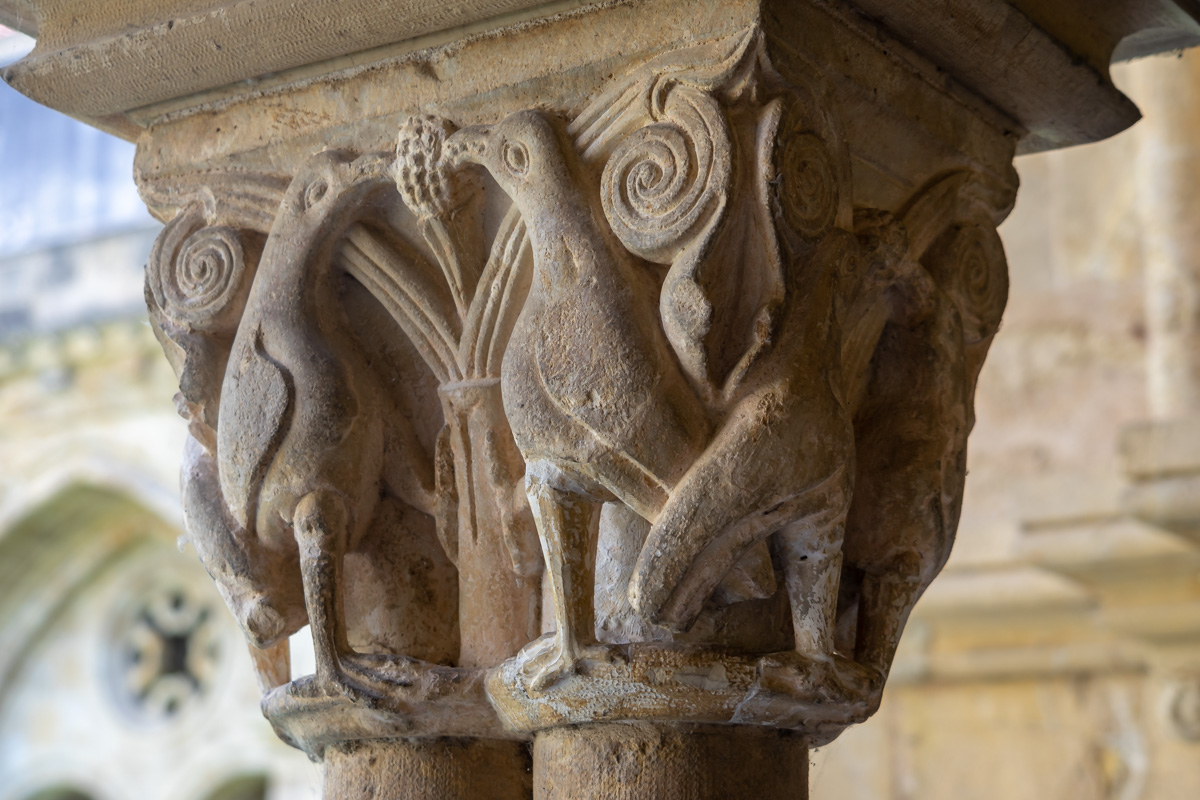 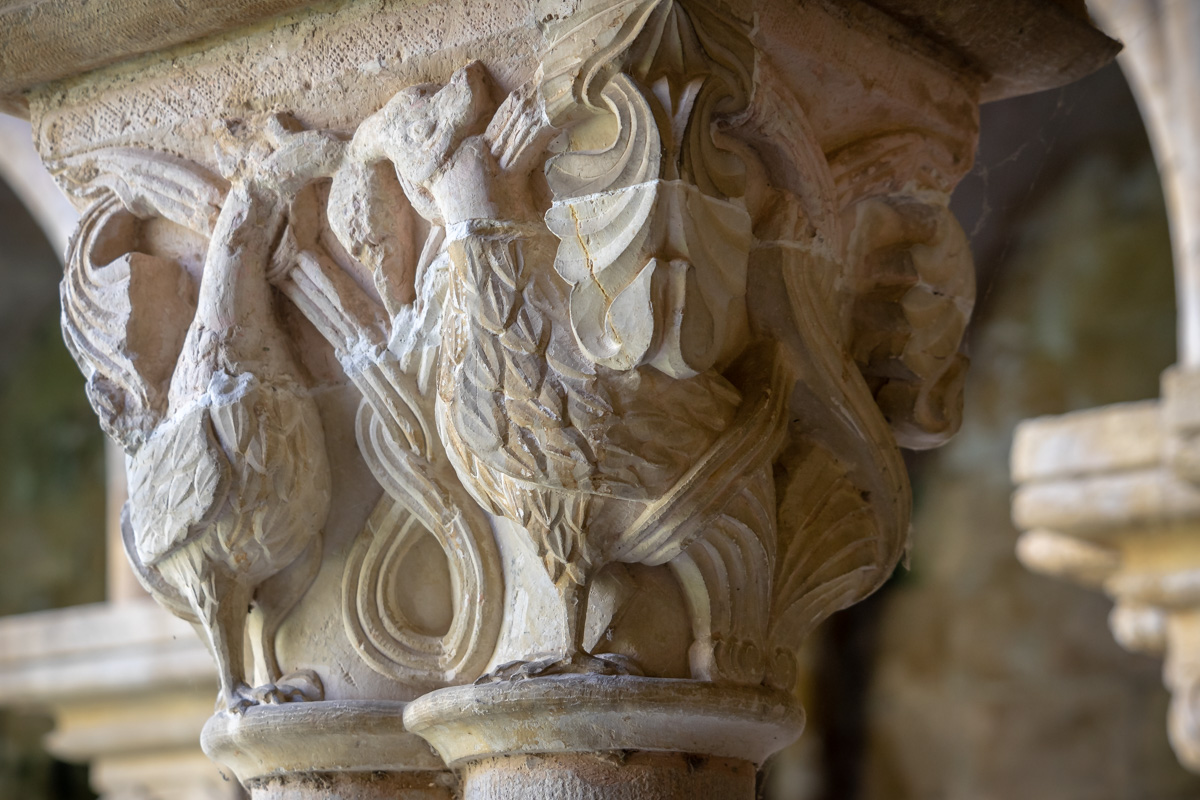 The 18th century Botanic Garden is included on the WH inscription. It is certainly a pleasant park for a relaxing stroll, but it probably looks prettier when flowers are in bloom. 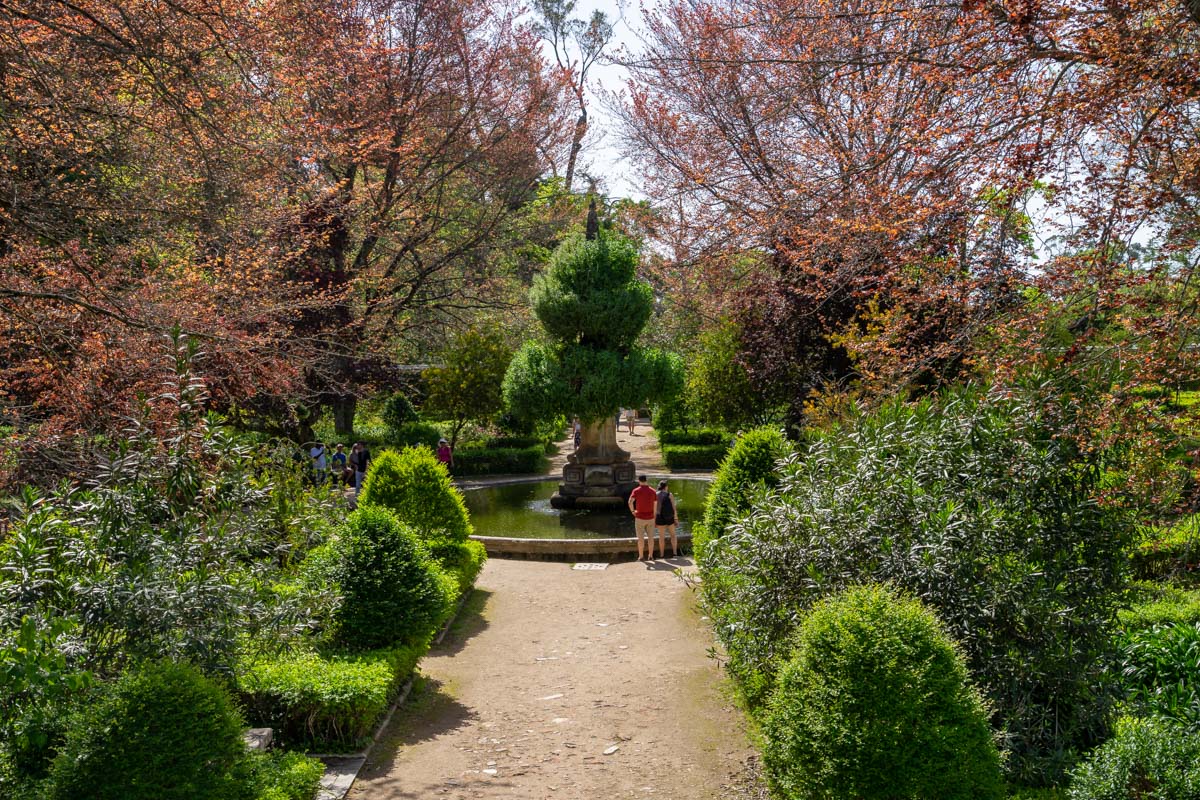 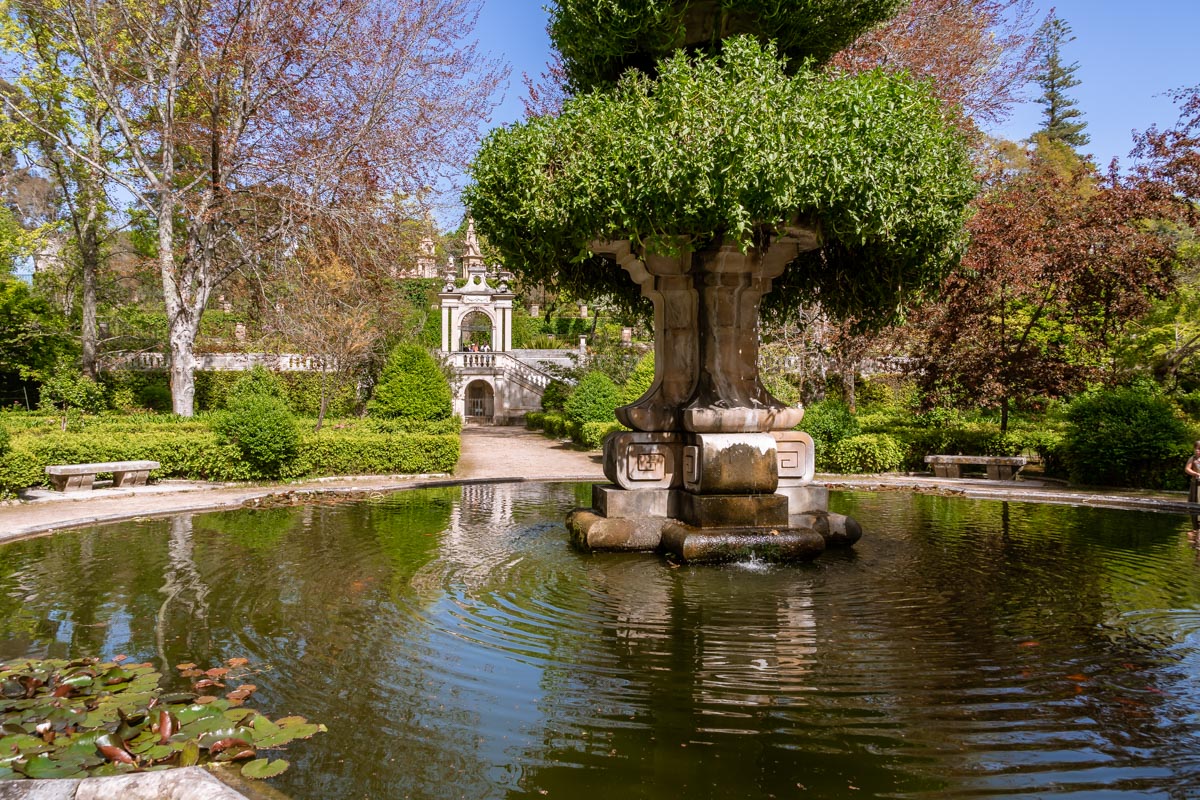 Beyond the central plaza, the university has a very mid-20th-century feel. 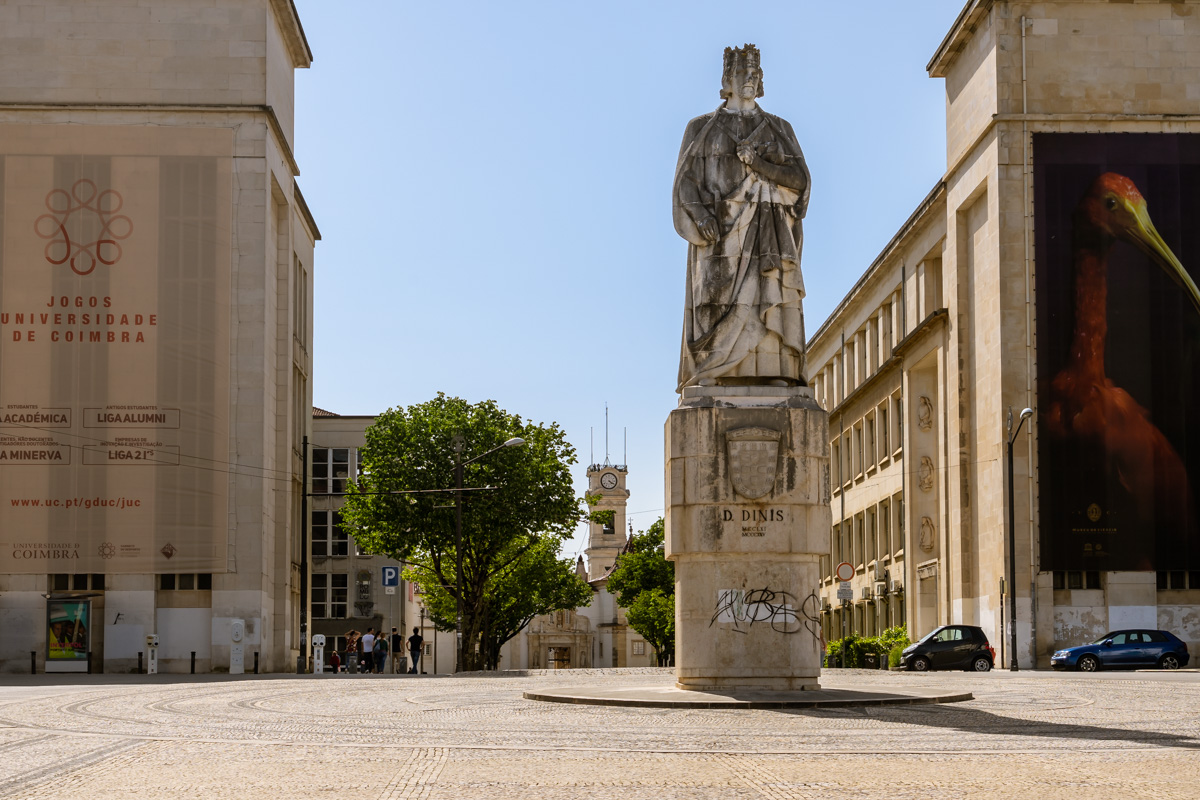 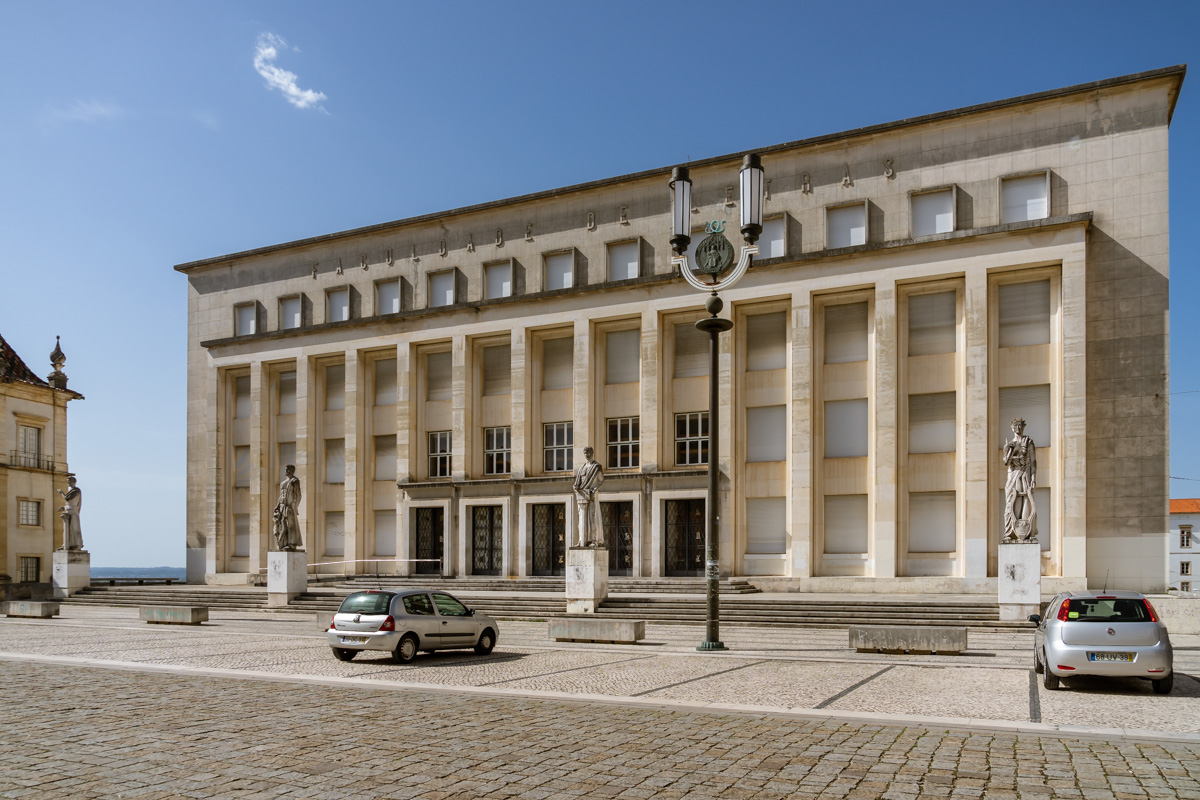 Some of the statuary inexplicably reminds me of the “triumphant proletariat” edifices that I grew up with. 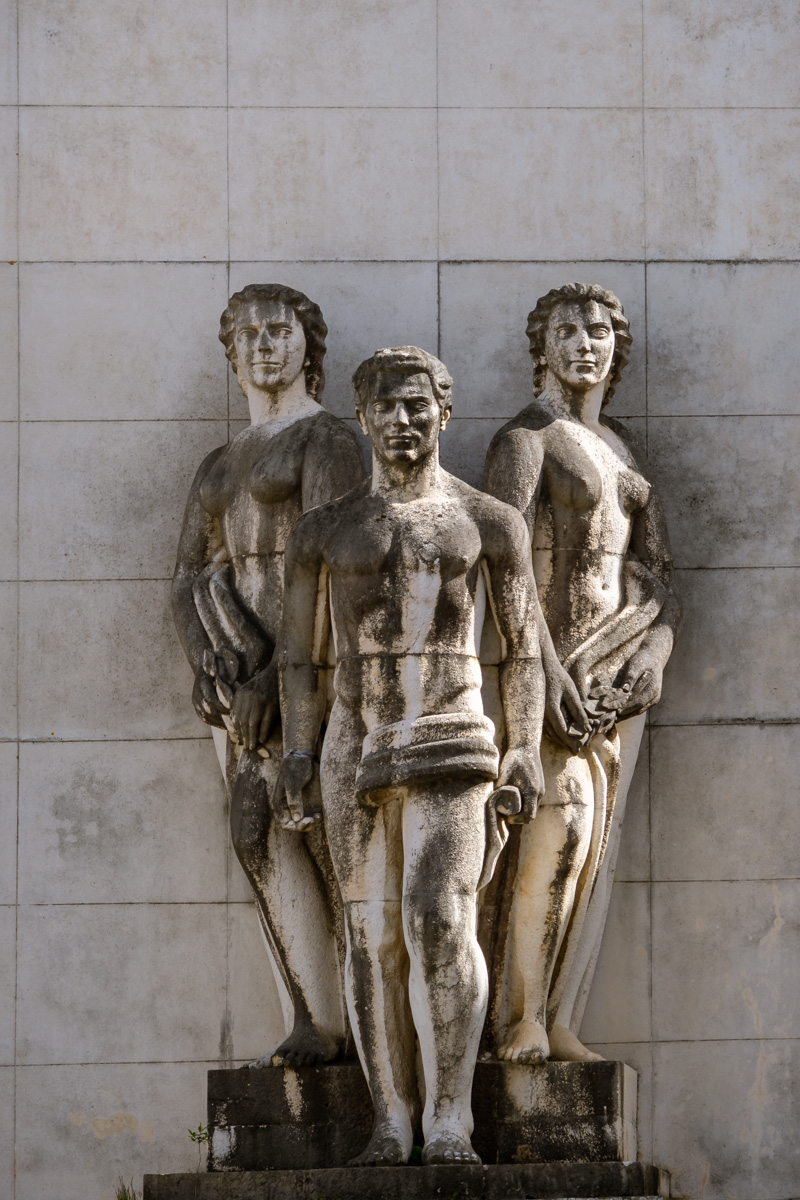 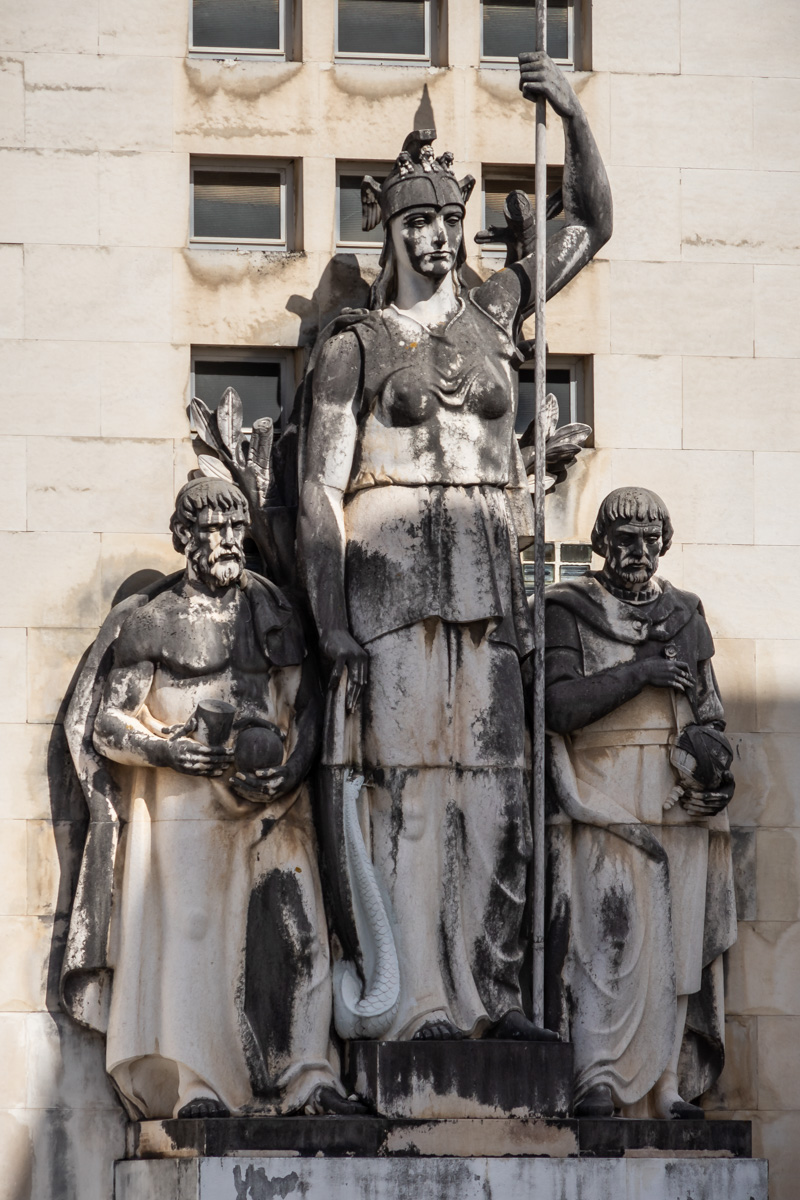 Here is a different type of sculpture. 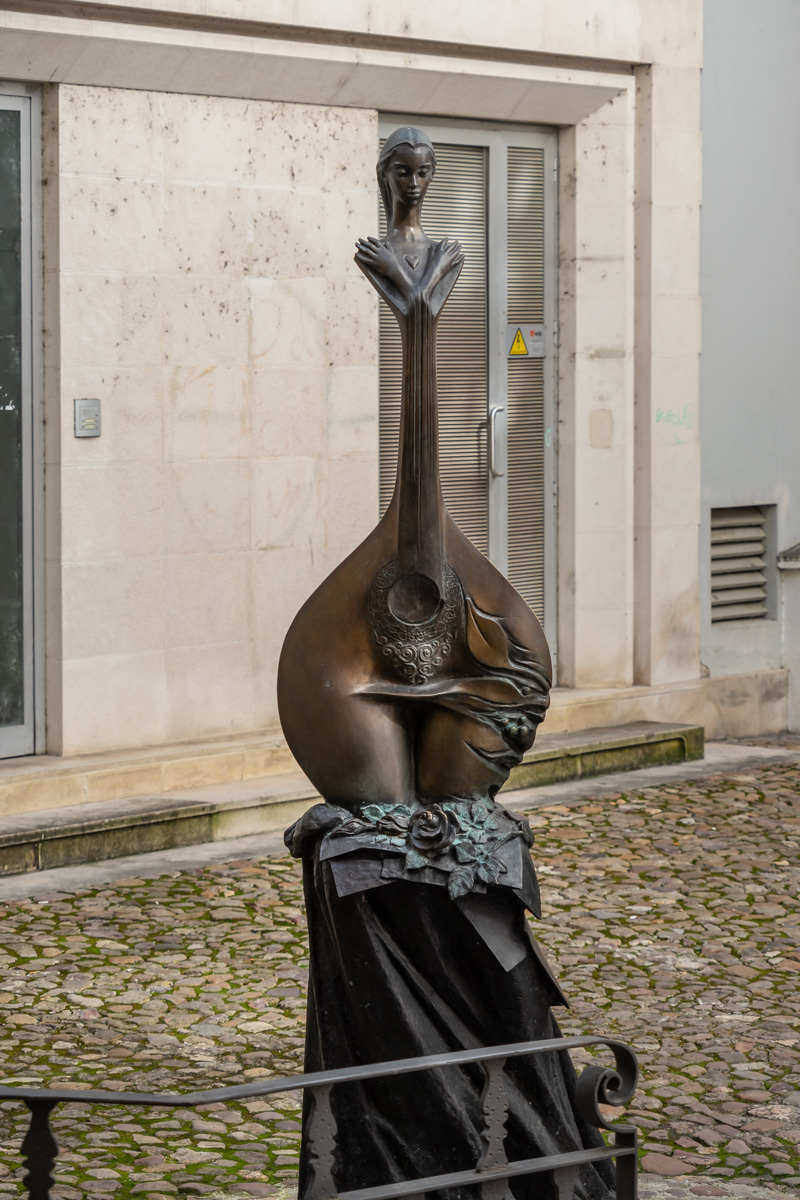 The church of Santa Cruz, in the heart of town by the foot of the university hill, may be the most impressive of all the churches in town. I remain confused as to whether the mention of “Cathedral of Santa Cruz” on the World Heritage inscription means this church or the Old Cathedral, but the amazing organ and gorgeous azulejo tiles all around the main nave definitely put Santa Cruz close to the top of must-see list in Coimbra. 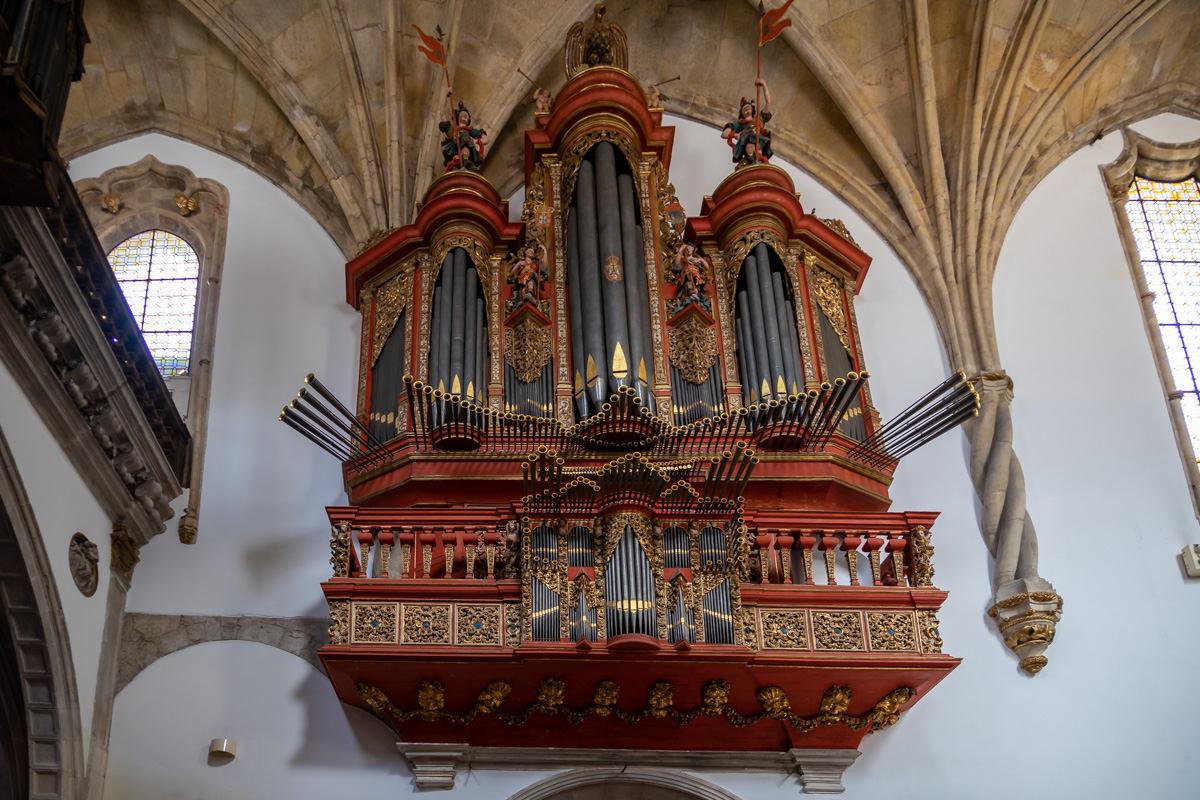 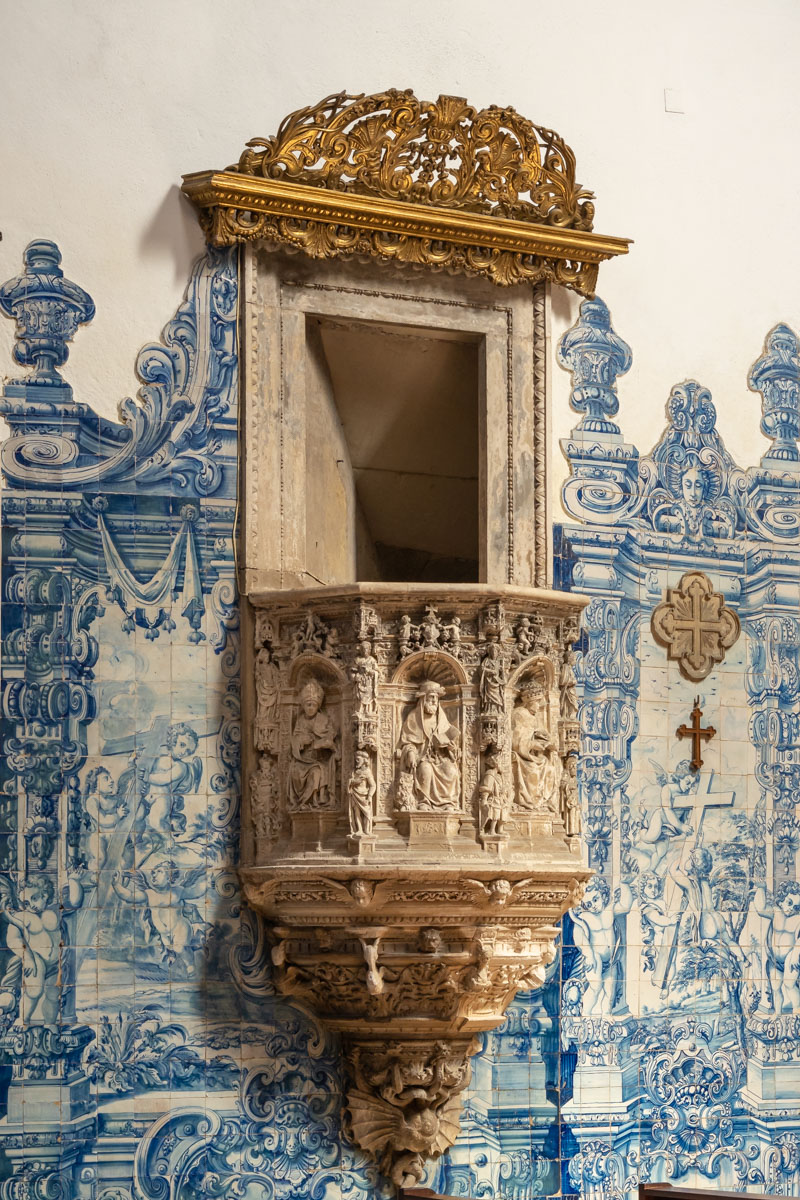 The tombs of the first two kings of Portugal are also here in this church.

We obviously focused on the university and historical sights while in Coimbra, but we also took a bit of a stroll through the central areas of town. Here are a few perspectives. 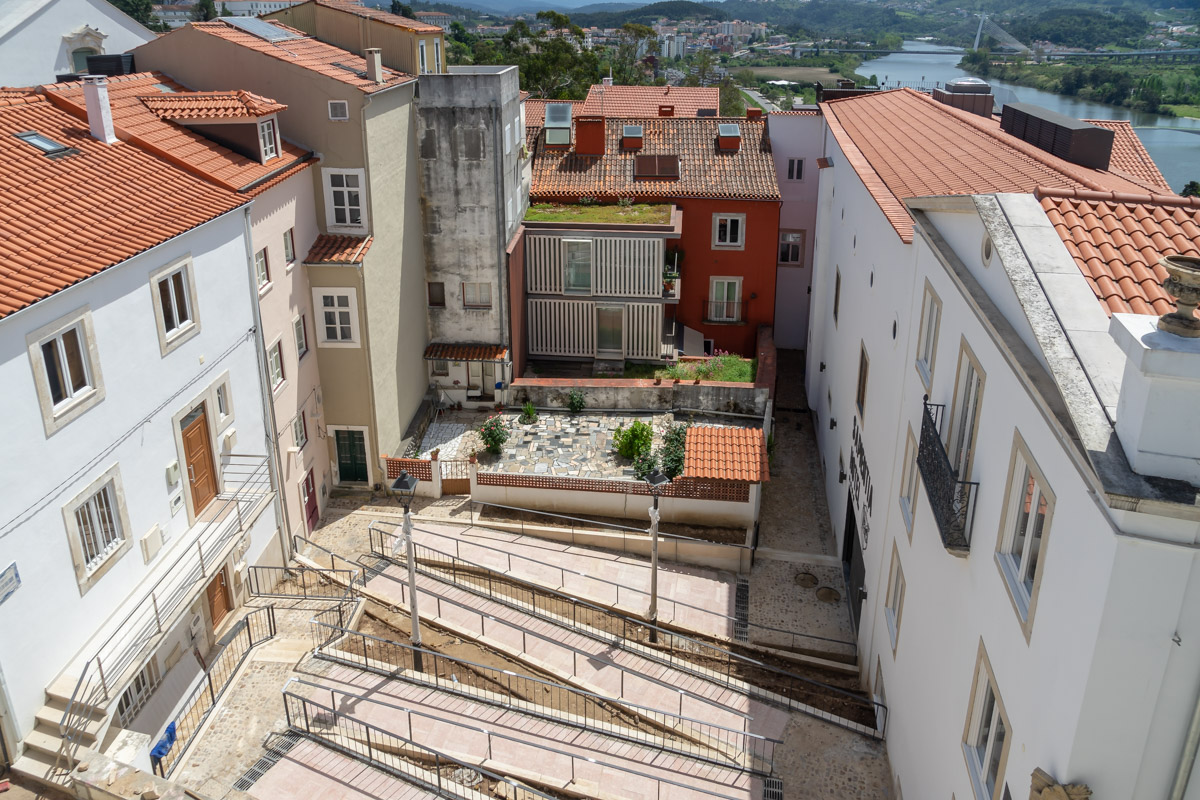 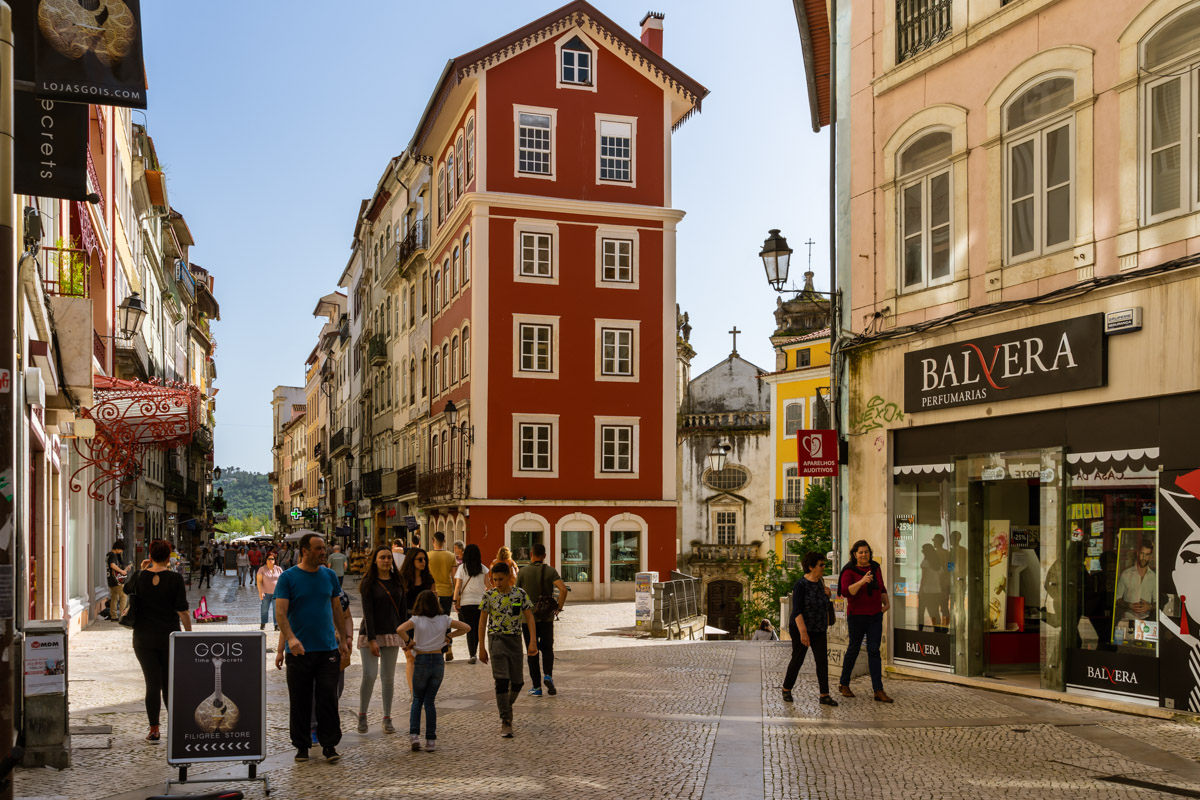 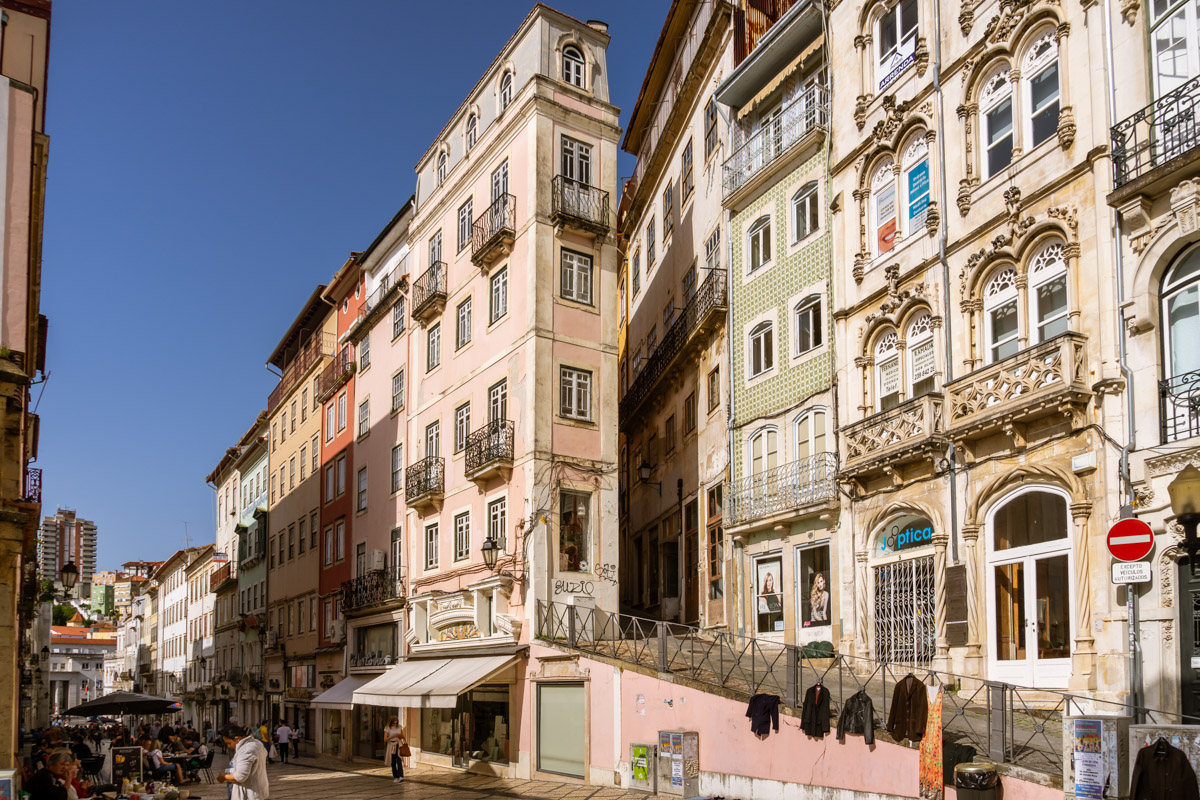 This is a corner of Praça 8 de Maio, one of the central squares of town. 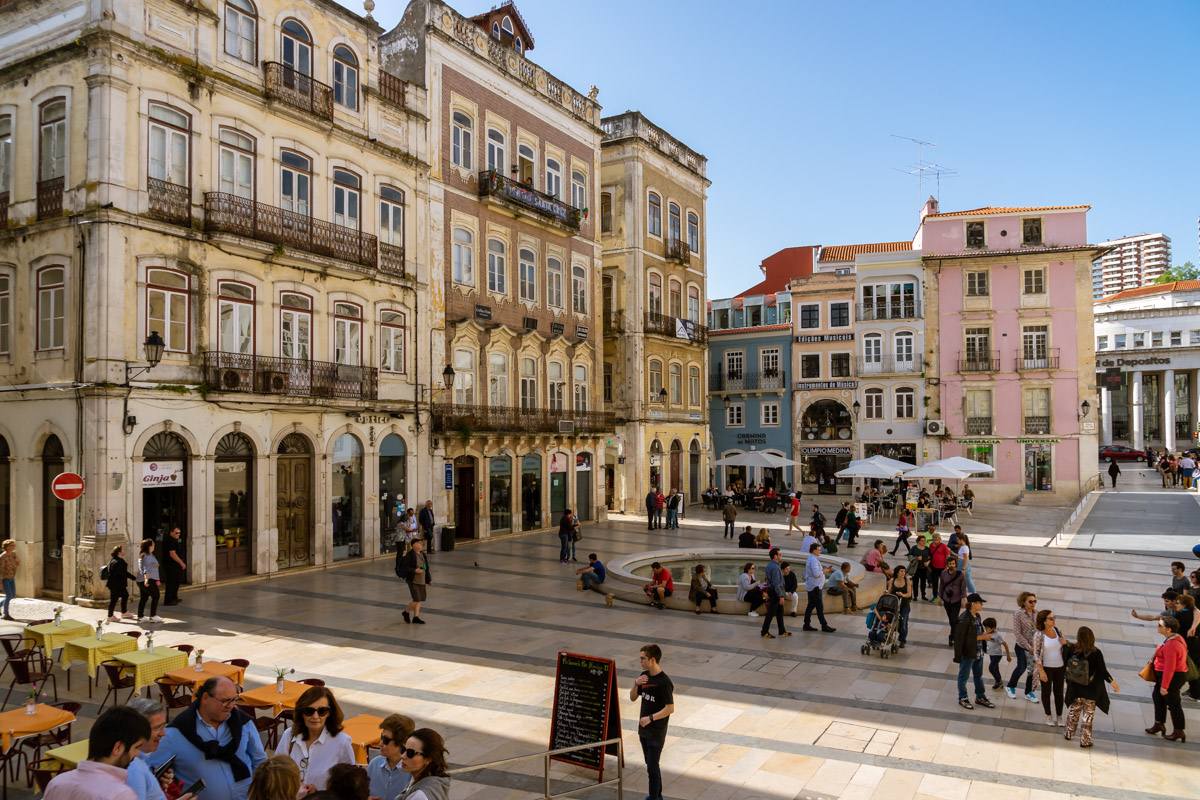 And this is the Manga Cloister, formerly part of the Santa Cruz Monastery. The fountain in the middle is meant to symbolize the source of life. The garden owes its name to a legend that King João III sketched its design on a sleeve of his dress (manga in Portuguese). 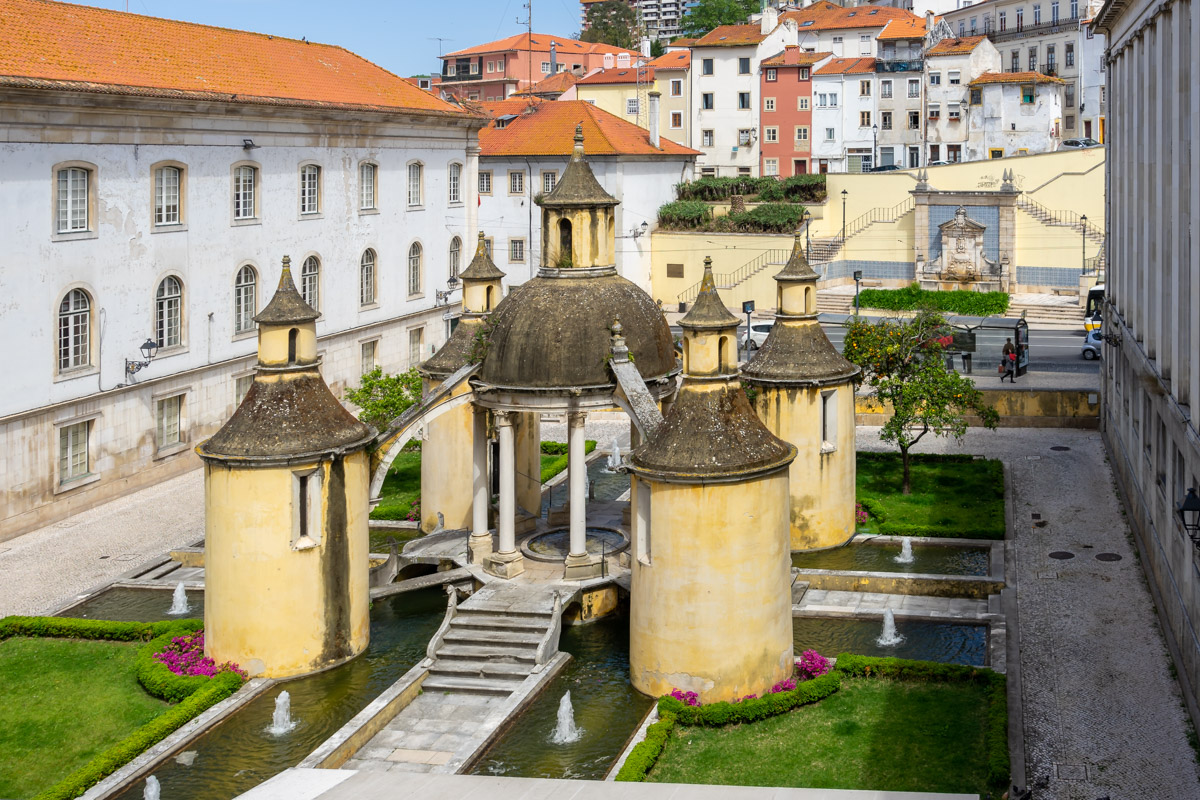 The view along Sofia Street, where the newer part of the university is clustered around. Although Coimbra World Heritage site explicitly names and includes this area, none of the buildings here stand out from the rest (which is both the testament to the integration of the university into the city and a bit of a visual disappointment). 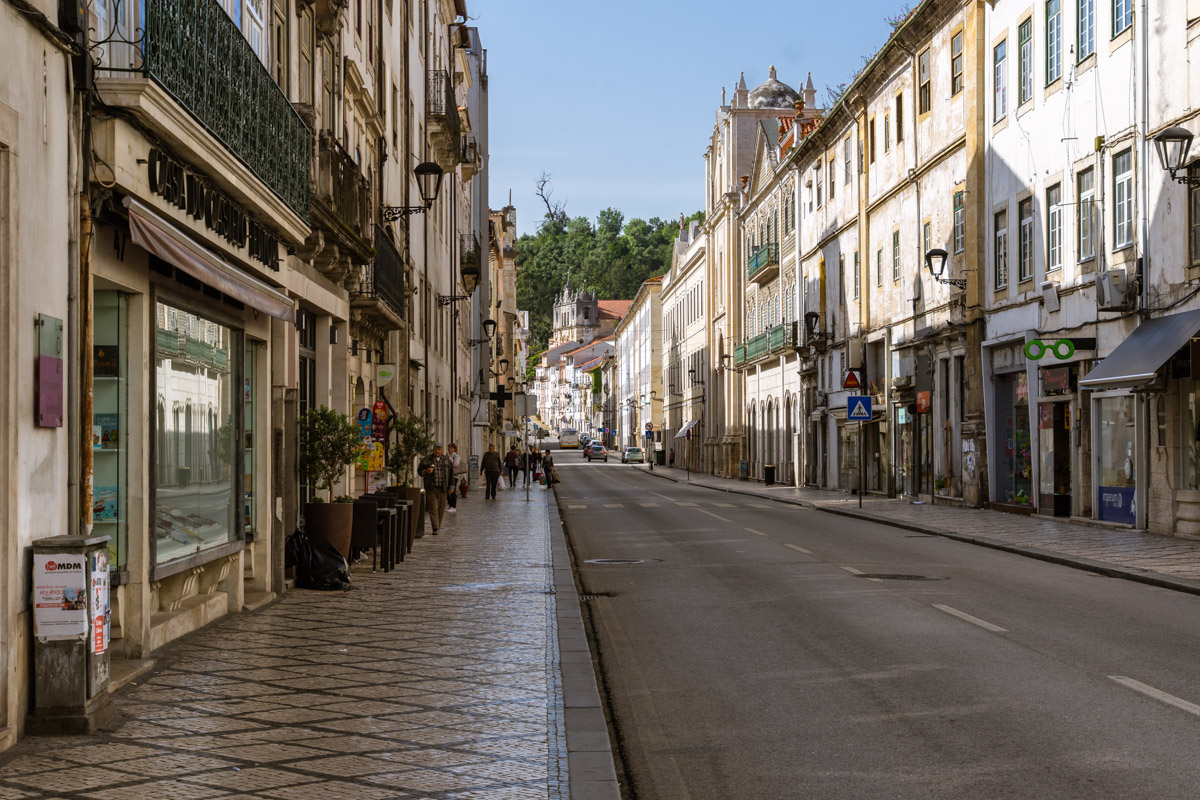 Coimbra is situated roughly halfway between Lisbon and Porto. It feels that the city attractions can support a day-and-a-half stay here (for instance, we did not stay around for a Coimbra Fado performance, and skipped a couple of other points of interest), but a day-trip from either of the major cities is also possible.