Our itinerary in Portugal was structured around two “hub-and-spokes” legs in Porto and Lisbon. There are roughly 300 kilometers of driving from one to another, with quite a few interesting sights in between. Seeing more than a couple of them requires more than one day. One solution to that would be adding another hub somewhere halfway between Porto and Lisbon. We approached it differently: after flying into Lisbon literally before the sun came up, we drove all the way to Porto on the first day and then all the way back a few days later. That gave us two full days to explore the sights along the way, and 4 nights in each of the big cities. (It also added 300 kilometers to the total driving distance compared to the option of flying into one city and leaving from another, which is a negligible amount in a country with roads as good as Portugal.)

That was a pretty long preamble to explain how the first place that we visited in Portugal was neither Porto nor Lisbon, but Alcobaça Monastery.

Alcobaça is part of the monastic triangle north of Lisbon. Each of the three monasteries is a World Heritage site on its own merit. Each is different from the others and is worth visiting.

Here is the main church façade of Alcobaça, recognized as a masterpiece of Cistercian Gothic art. 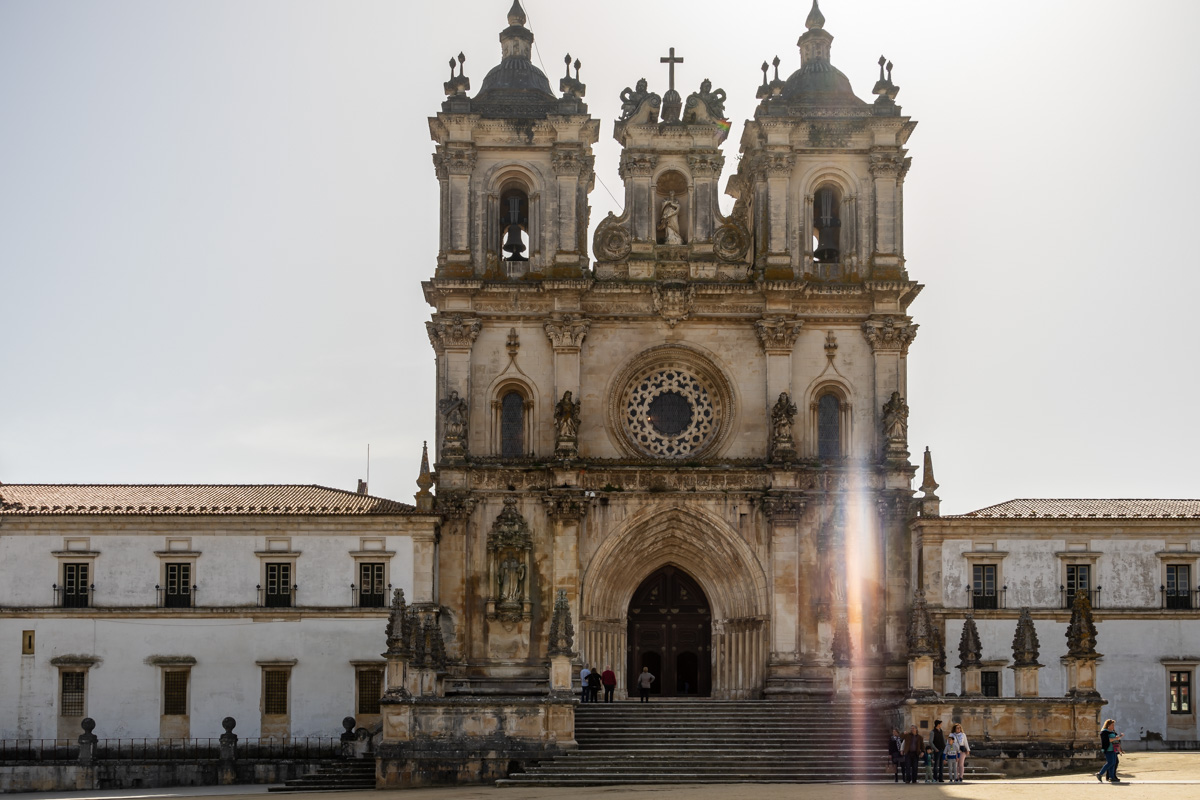 (Incidentally, putting the word façade next to the monastery name might help those not familiar with diacritics in correctly pronouncing the last consonant in Alcobaça).

The morning timing of our visit meant that I had no choice but to shoot into the sun for the frontal view. Nor did I have lenses for a wider perspective. So I tried the panoramic approach, which came out reasonably well despite the obvious spherical projection distortion.

The monastery was established in the 12th century by the first king of Portugal, Afonso Henriques. It is primarily a Gothic structure, with some Baroque and Manueline influences added later on. We will see the exuberant Manueline style later on the trip – in comparison, Alcobaça is almost subdued. 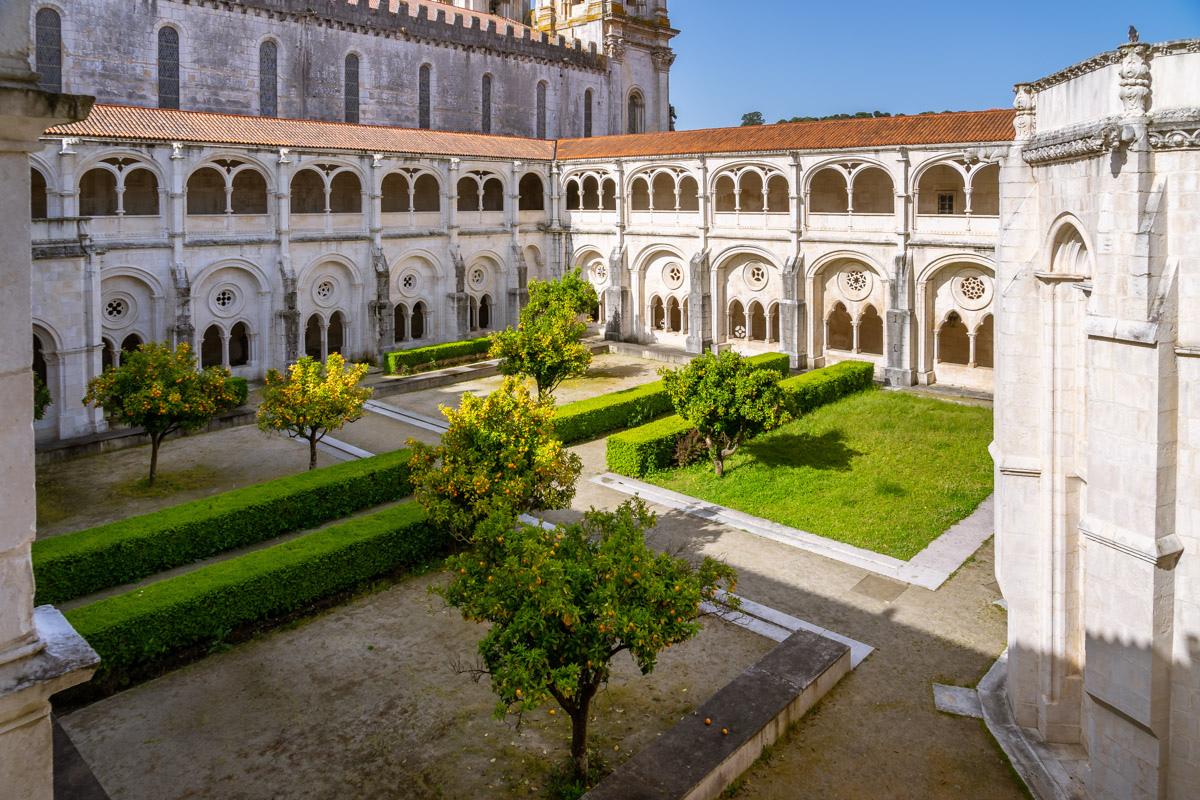 At a first glance it may appear no more than pretty and even a bit bland – that is until you start noticing details. For instance, take a closer look at rose windows above the ground-level arches in the previous shot. You will notice that no two of them are the same.

And if you were to examine column capitals, you would notice that the relatively simple columns are crowned with the abundance of fantasy and design. 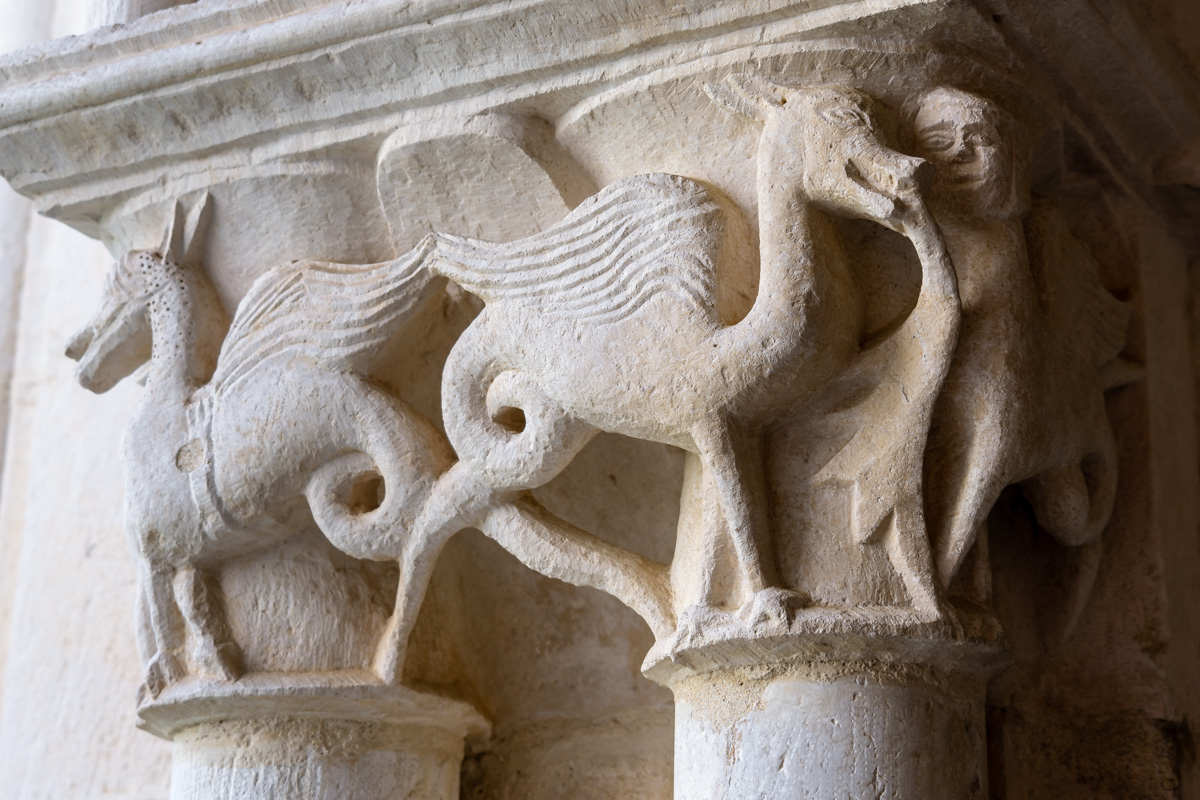 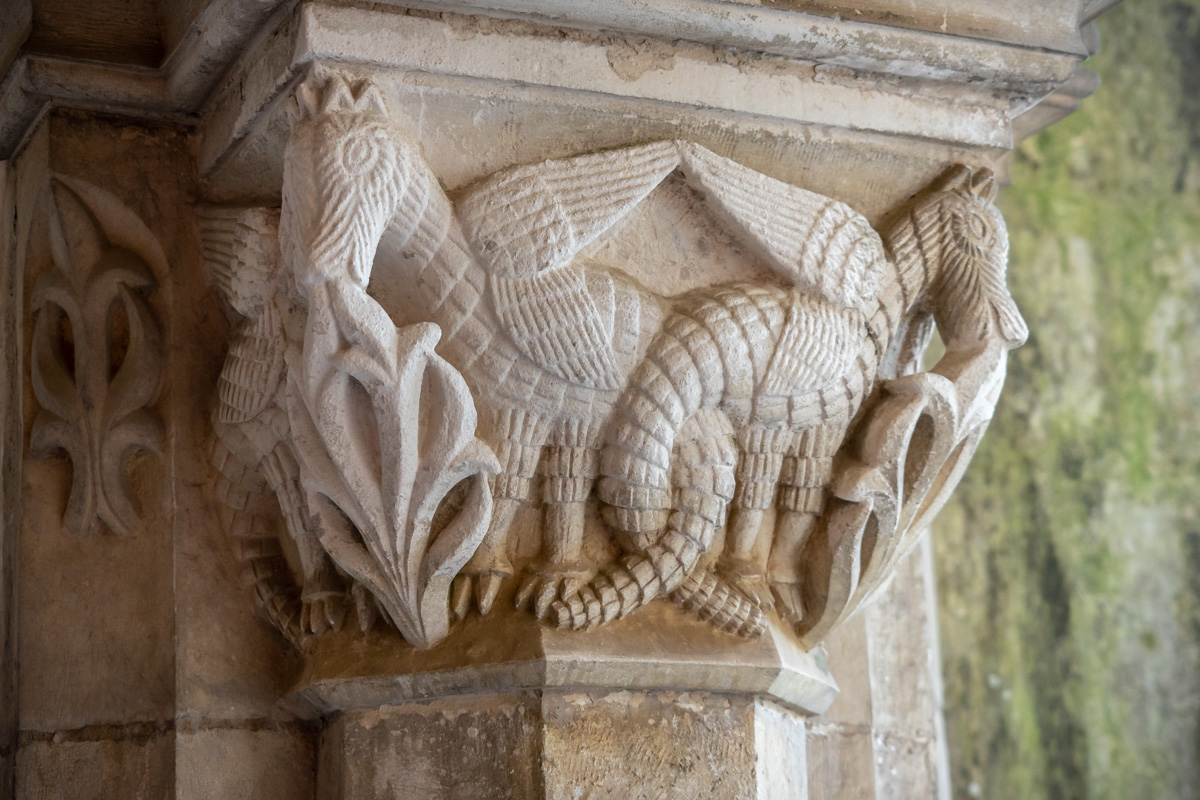 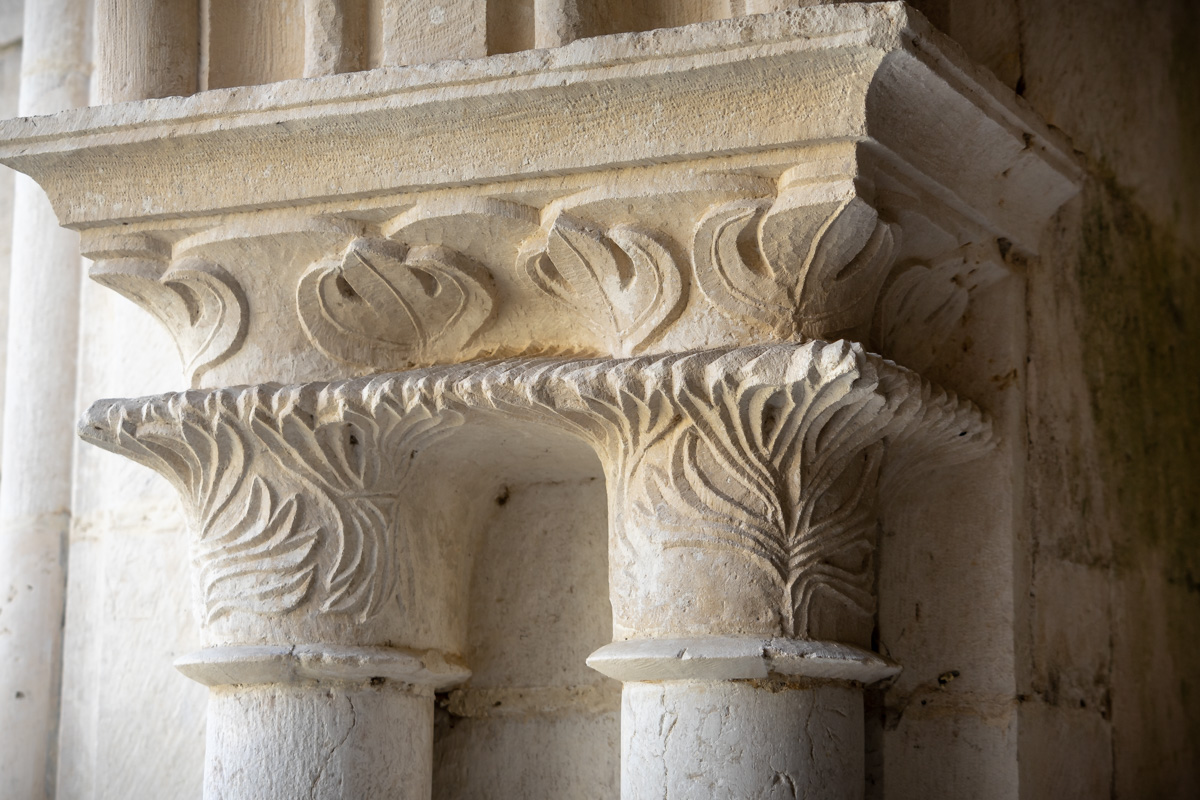 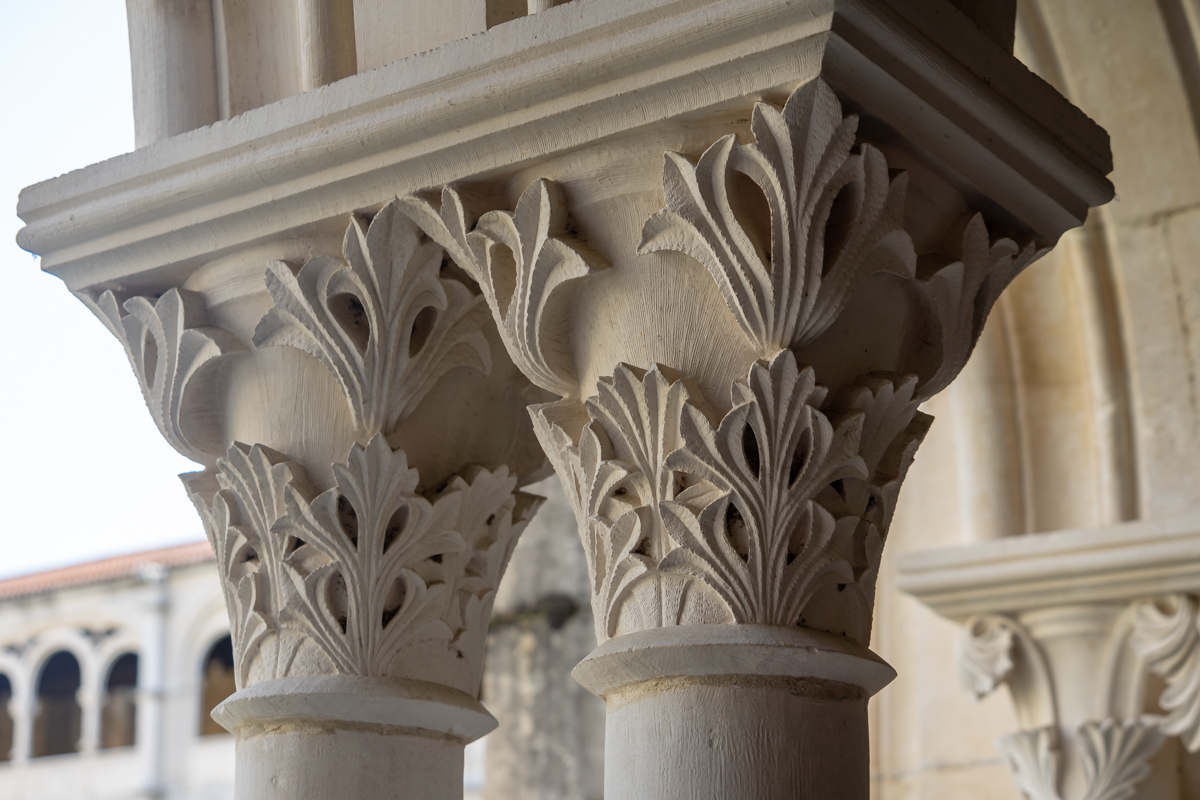 Gargoyles are nothing short of delightful. 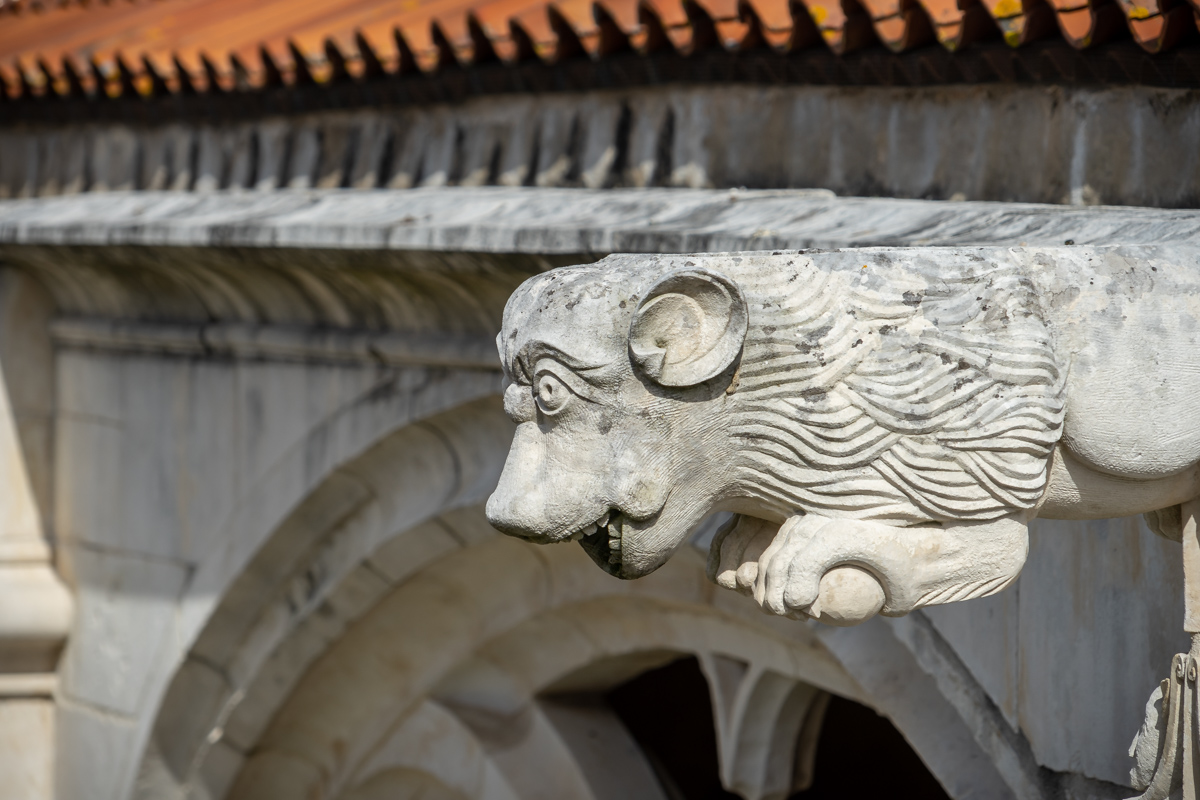 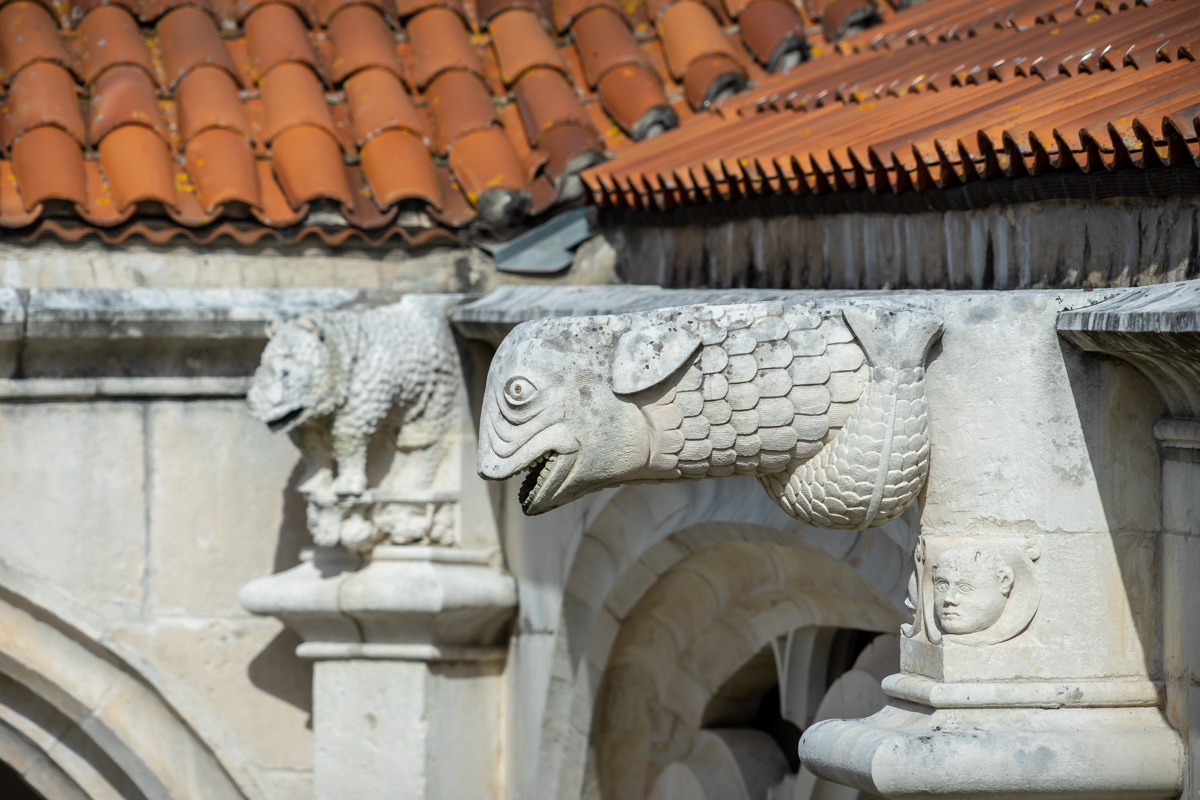 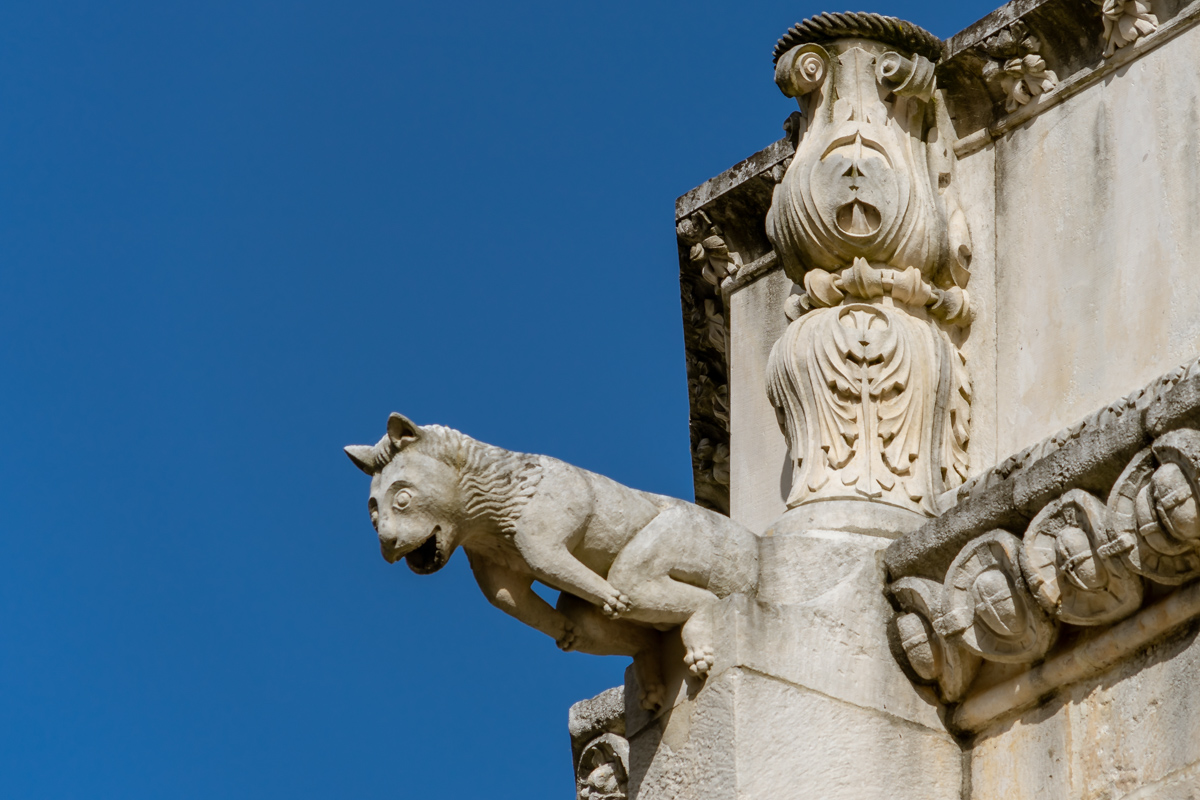 The monastery presents itself as well tended and cared for. We will see later on the trip that such level of care is not universal, and a number of monuments suffers in comparison because of a degree of neglect.

Beyond the cloisters, there are several interior spaces of note at Alcobaça. We were most impressed by two. The Hall of Kings displays statues of Portuguese monarchs, but the tiles steal the show. 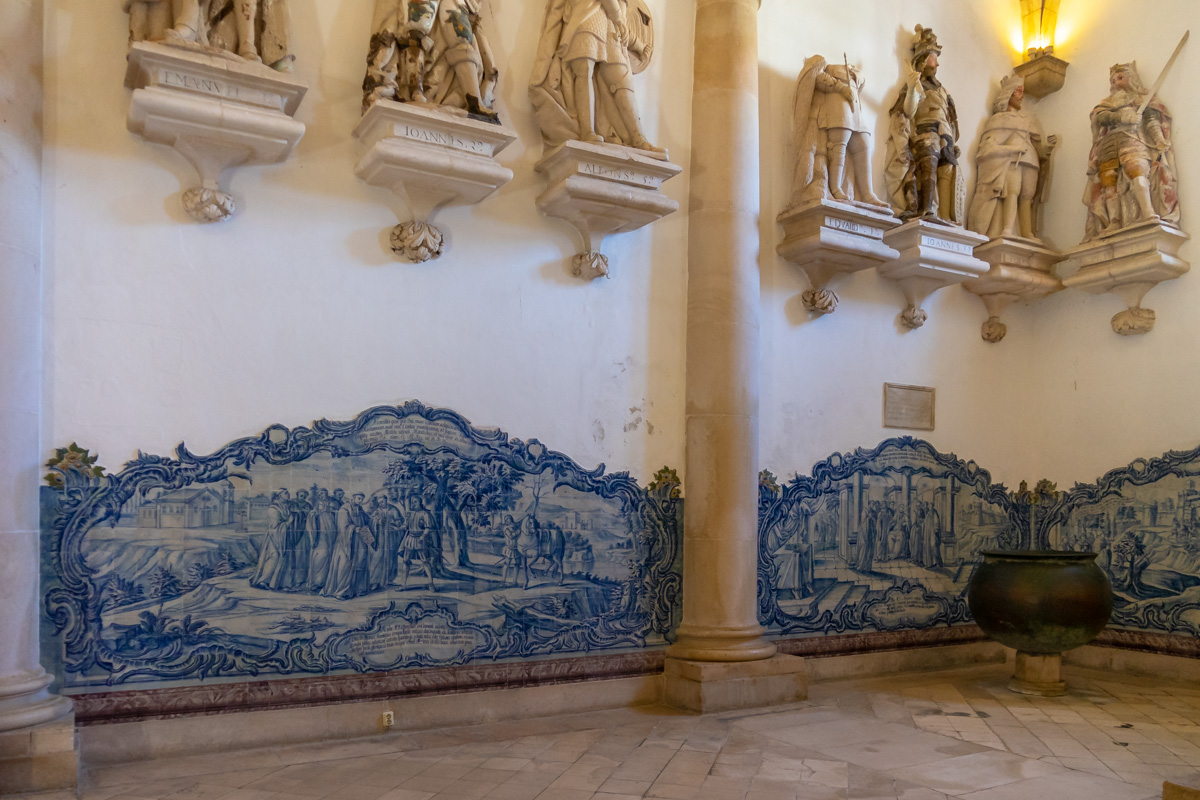 The kitchen is centered on an enormous chimney – the shot below does not do it justice. 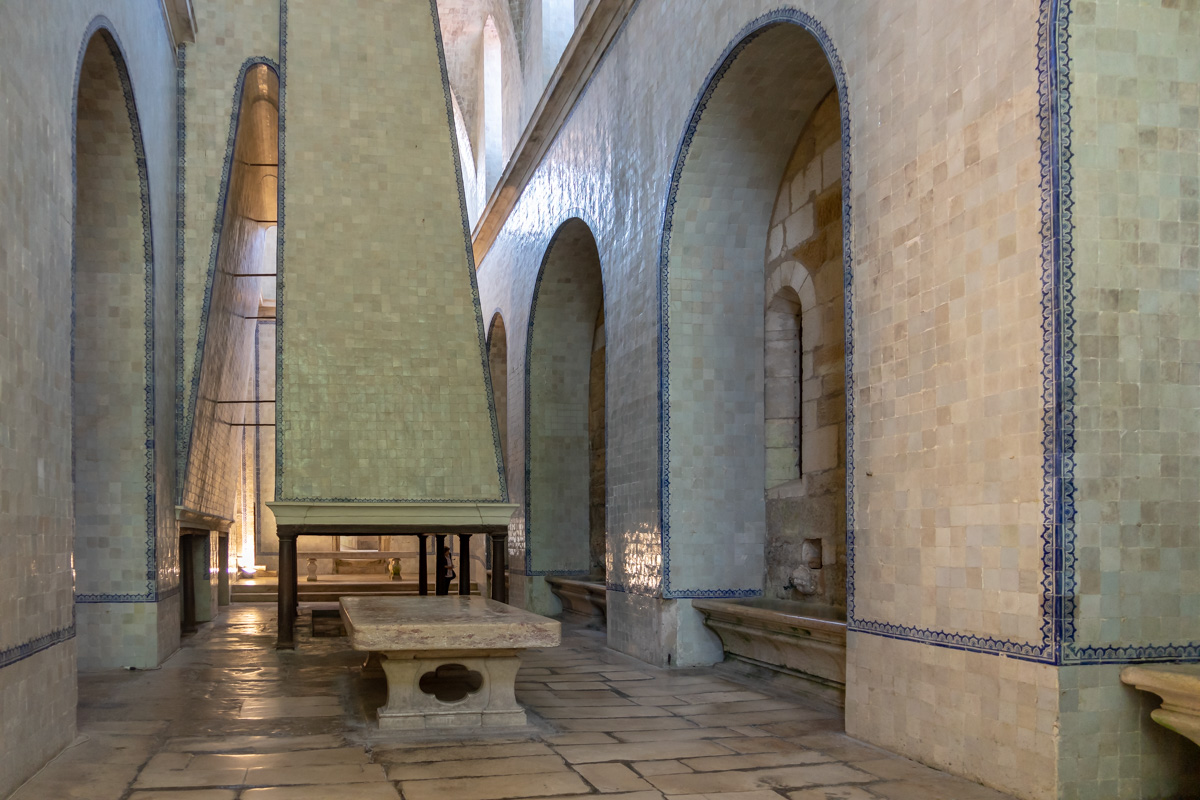 A couple of looks at the Baroque towers of the monastery – they are quite younger than the original building, dating from the 18th century. 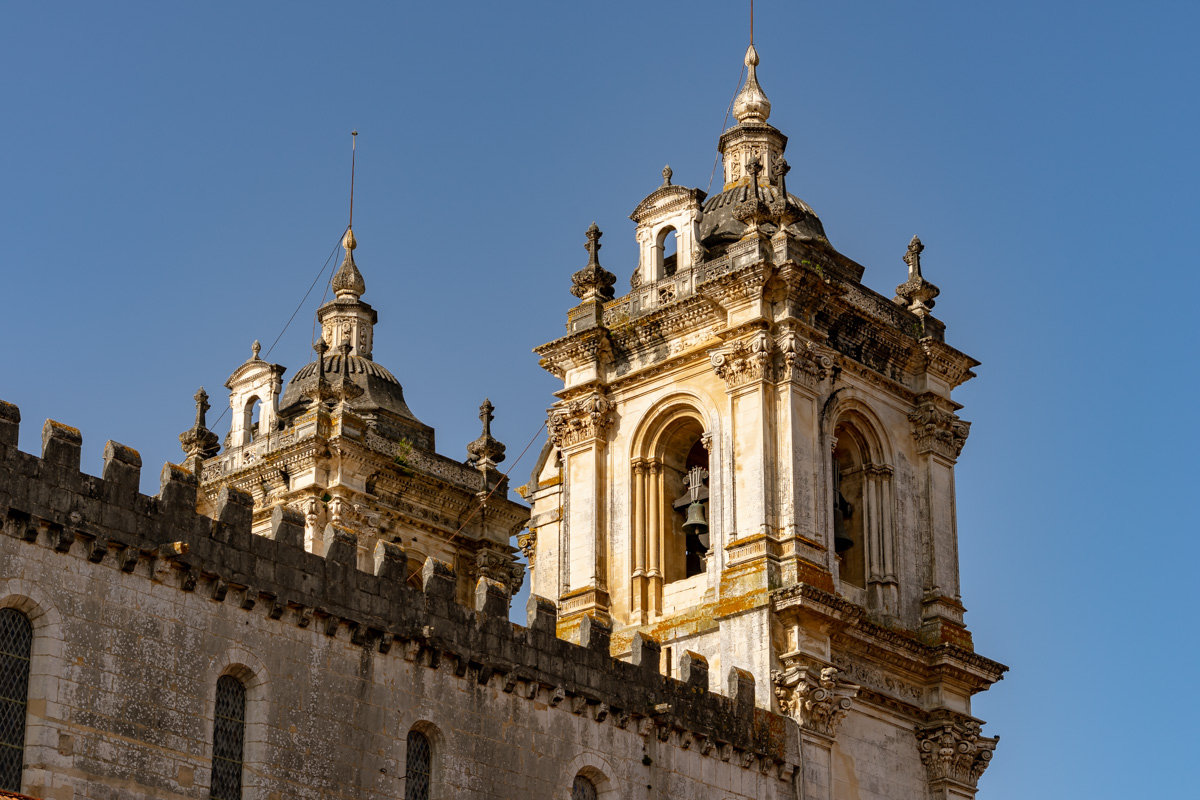 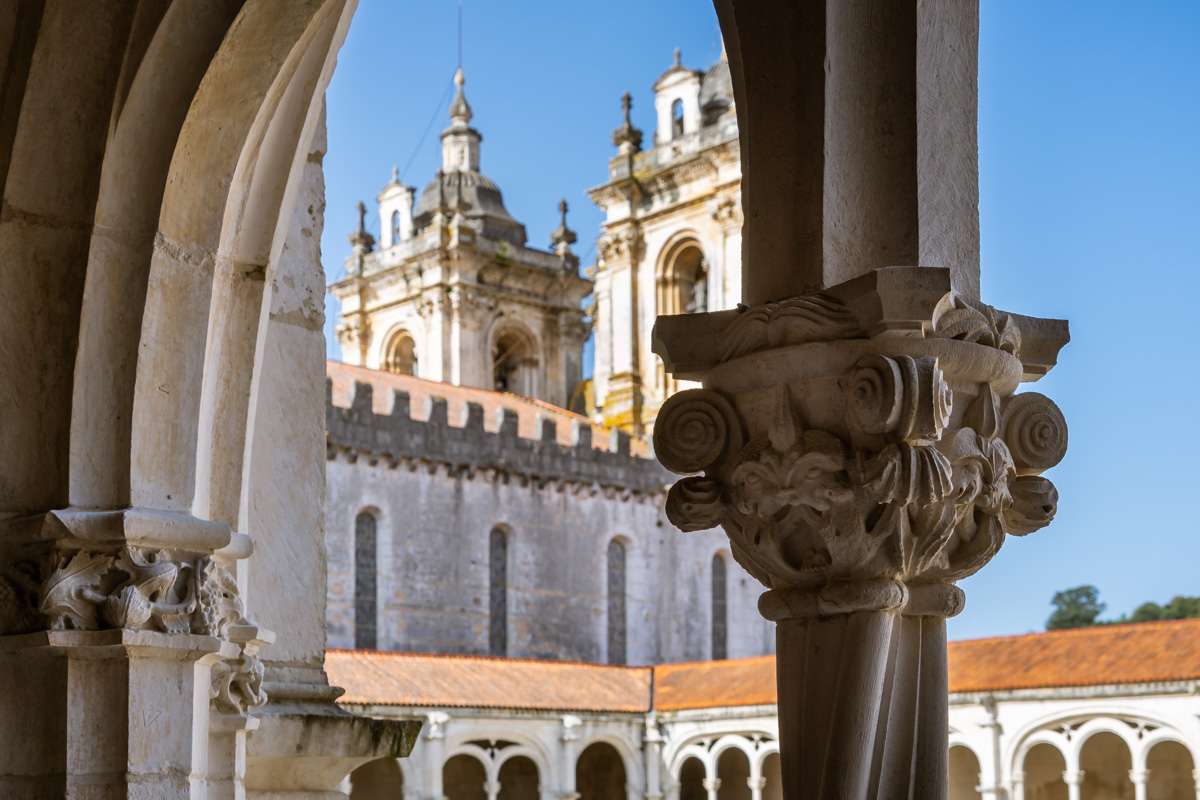 And the above shot, taken through the upper-level arches in the cloister, illustrates another later-times monastery design element – the twisted column is Manueline.

We had a chance to stroll through the central part of the town of Alcobaça before and after our monastery visit. It may never be a destination in itself, but it is pleasant enough with a few fetching vistas and colorful corners. 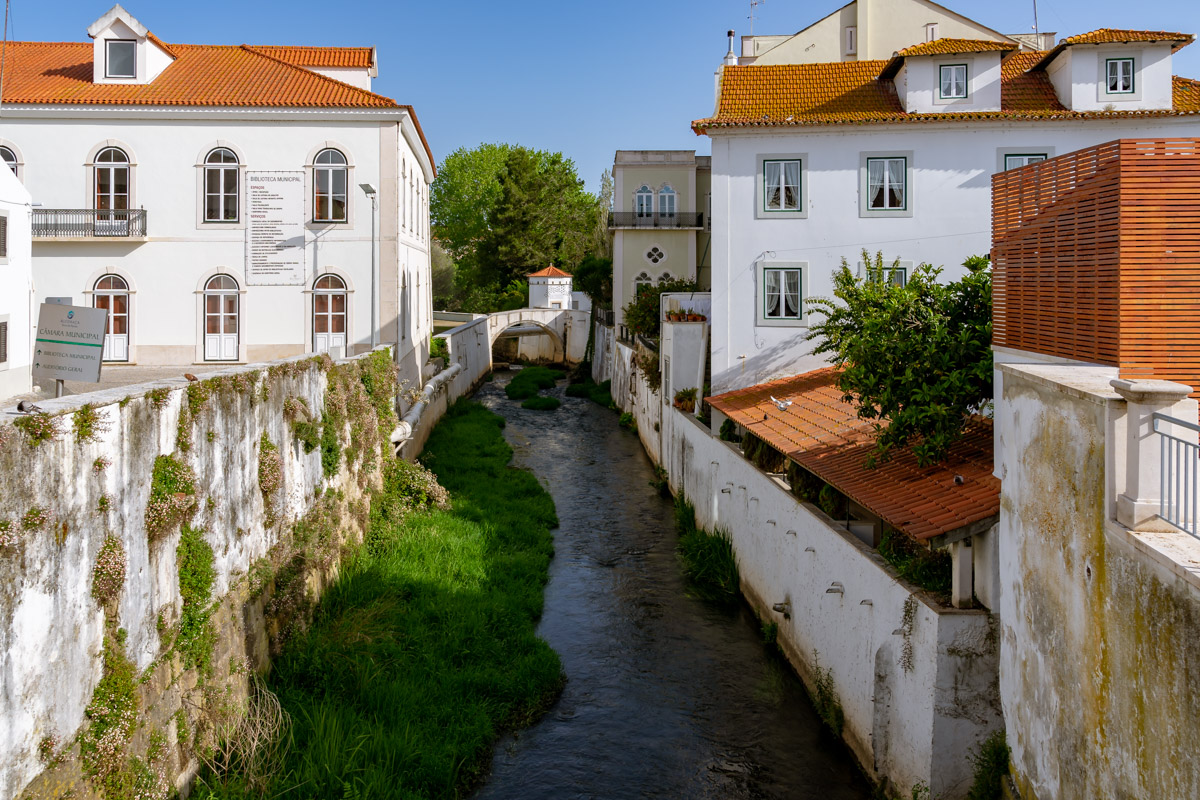 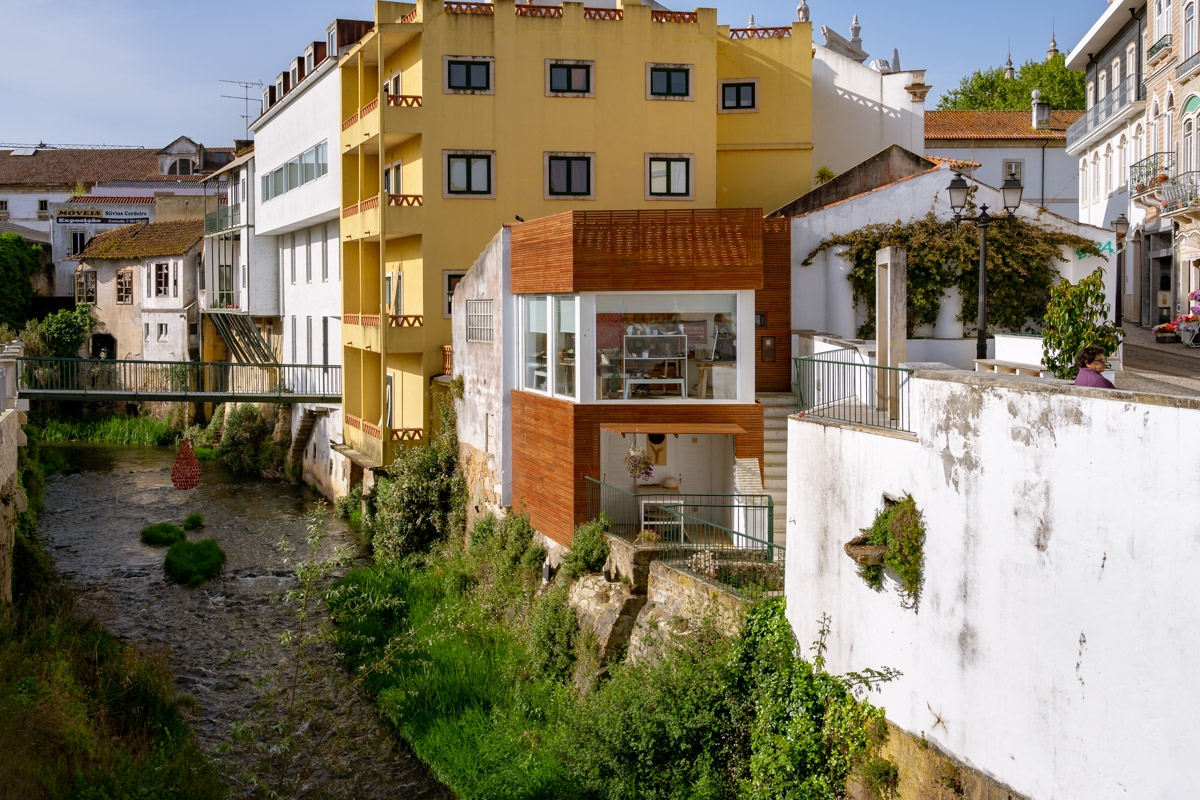 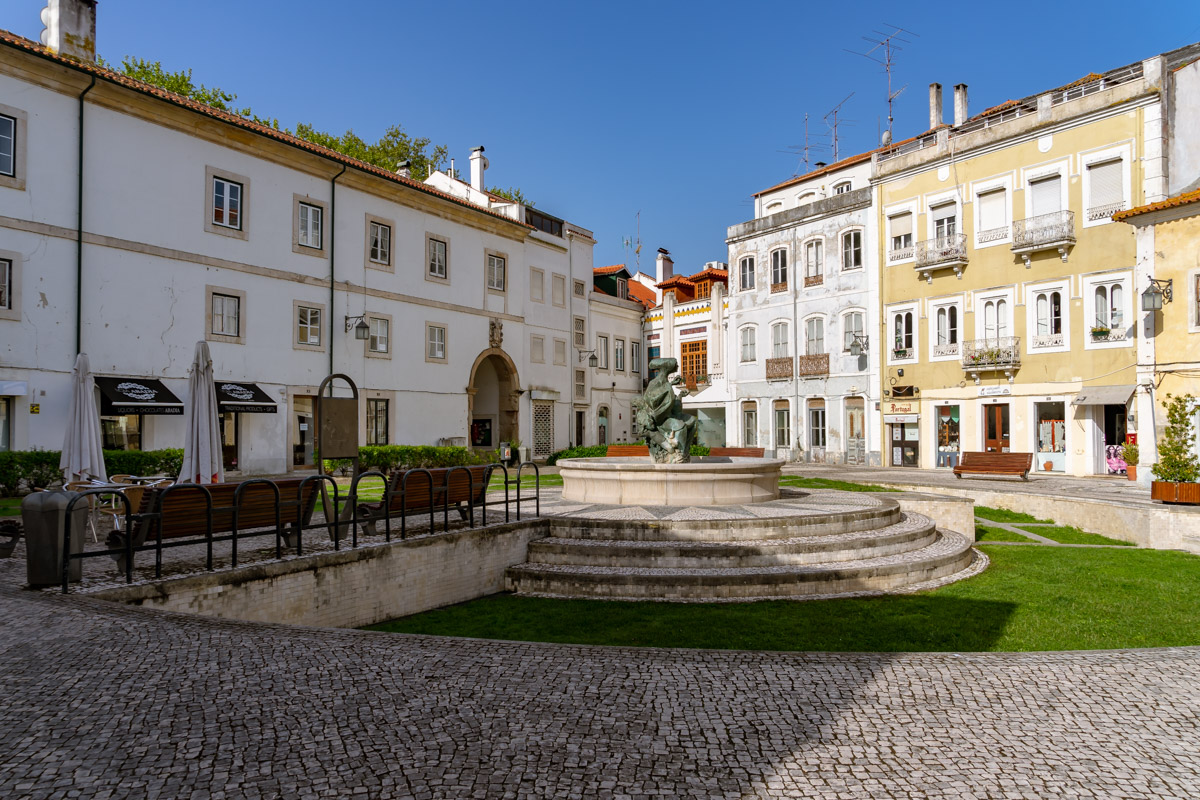 If you are driving from Lisbon, it should take just over an hour to reach Alcobaça. An hour-plus is sufficient time to see the monastery.