I always find myself awed by grandiose edifices. Beholding the Parthenon up close, unfailingly grandiose despite its ruined state blended with a construction site, made the visit to Acropolis instantly worthwhile. 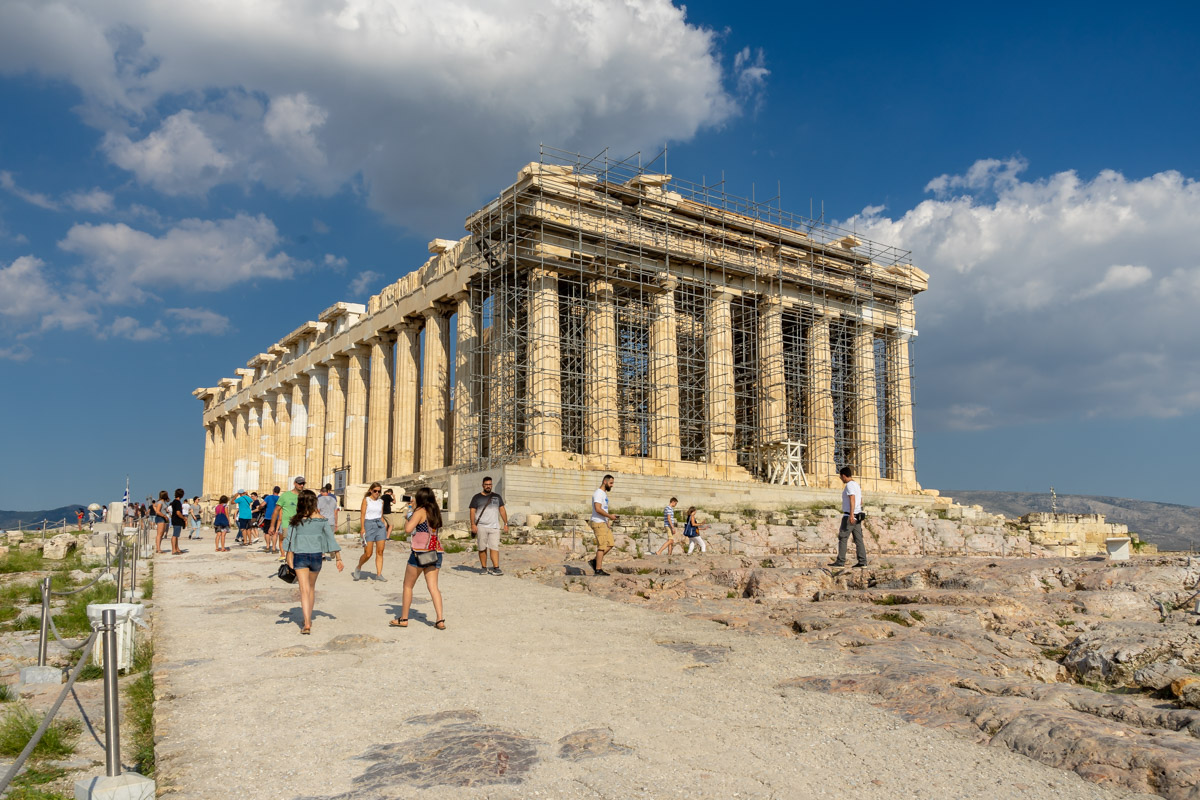 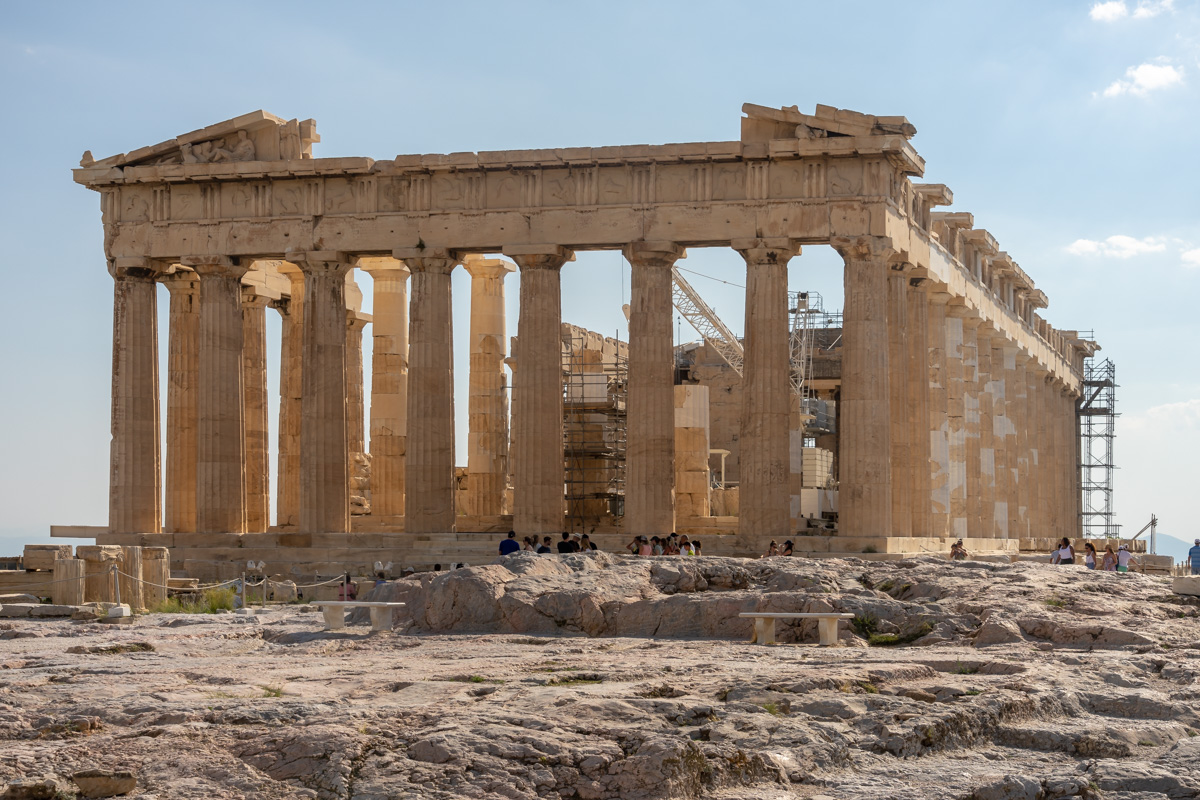 Built in the 5th century BC to honor goddess Athena, the patron of the city, the temple survived rise and fall of empires and had reincarnations as a church and a mosque, until grave damage was done to it at the end of the 17th century AD during hostilities between the Ottoman Empire and the Venetian Republic. In the early 19th century, representatives of the British Empire removed almost all of the then-remaining marble statuary, leaving the grand temple as an empty shell, which nonetheless retains the status of a signature piece of Doric architecture. 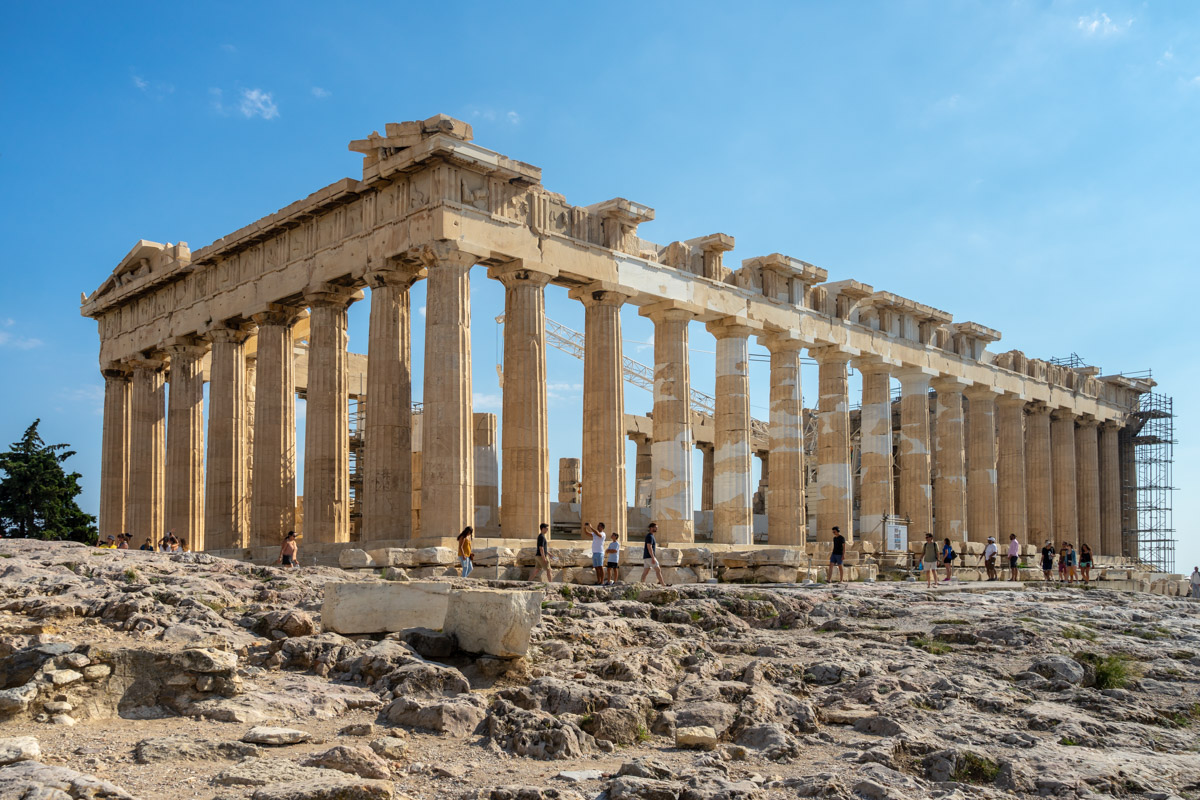 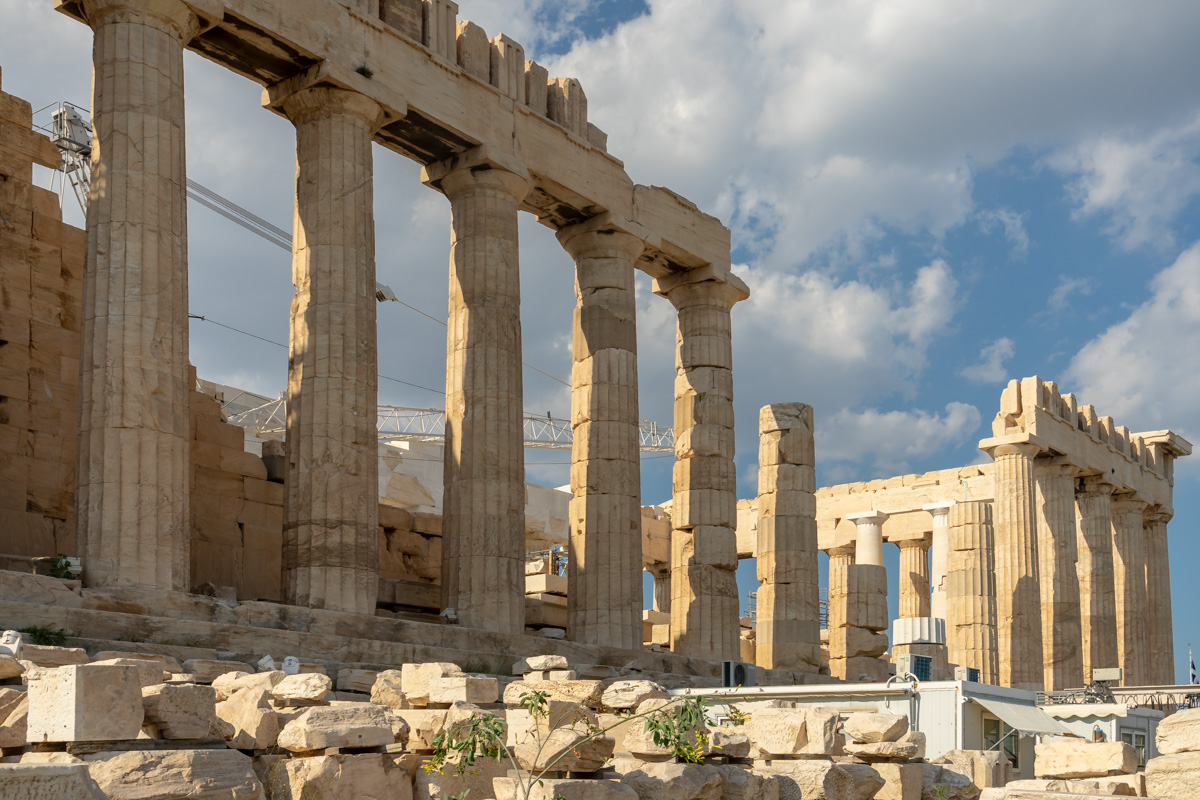 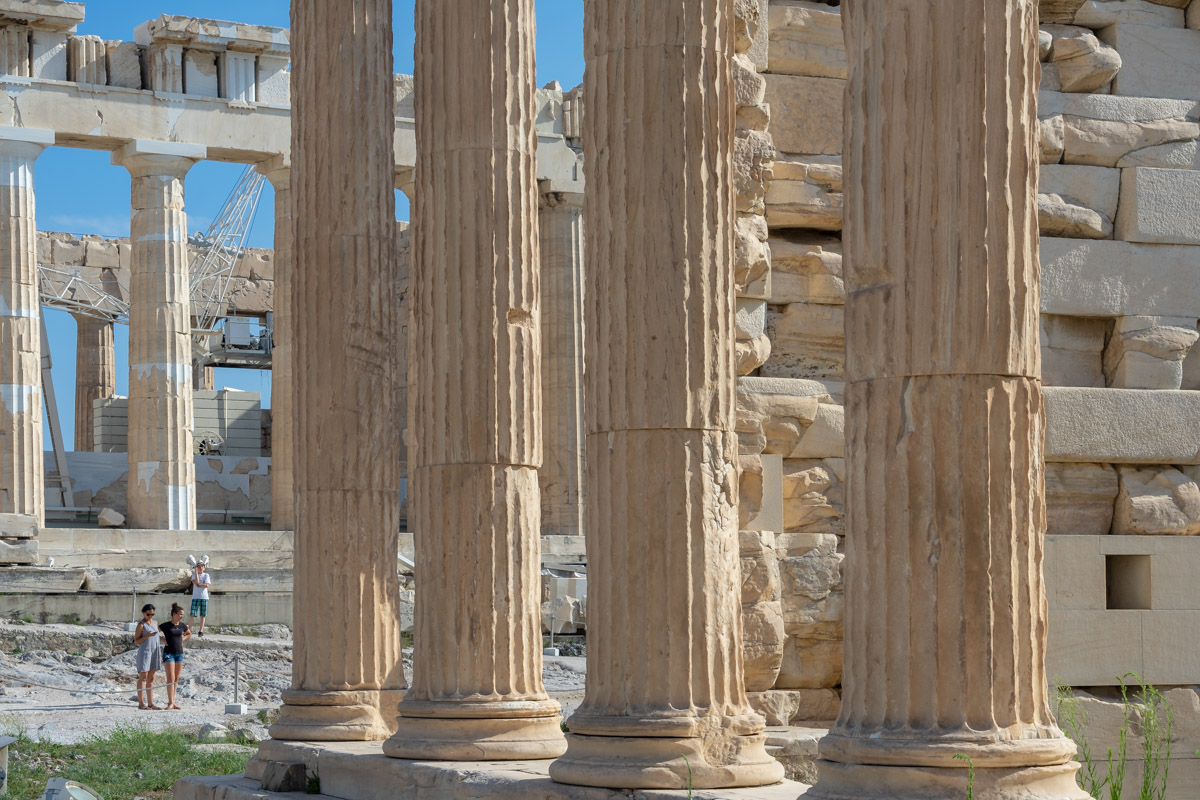 Acropolis, of course, is not just about the Parthenon. The monumental complex is an enduring symbol of the classical antique civilization that gave birth to many forms of art and schools of thought that we value today.

One of the other important monuments in Acropolis is the Erechtheion, which is just a few decades younger than the Parthenon. 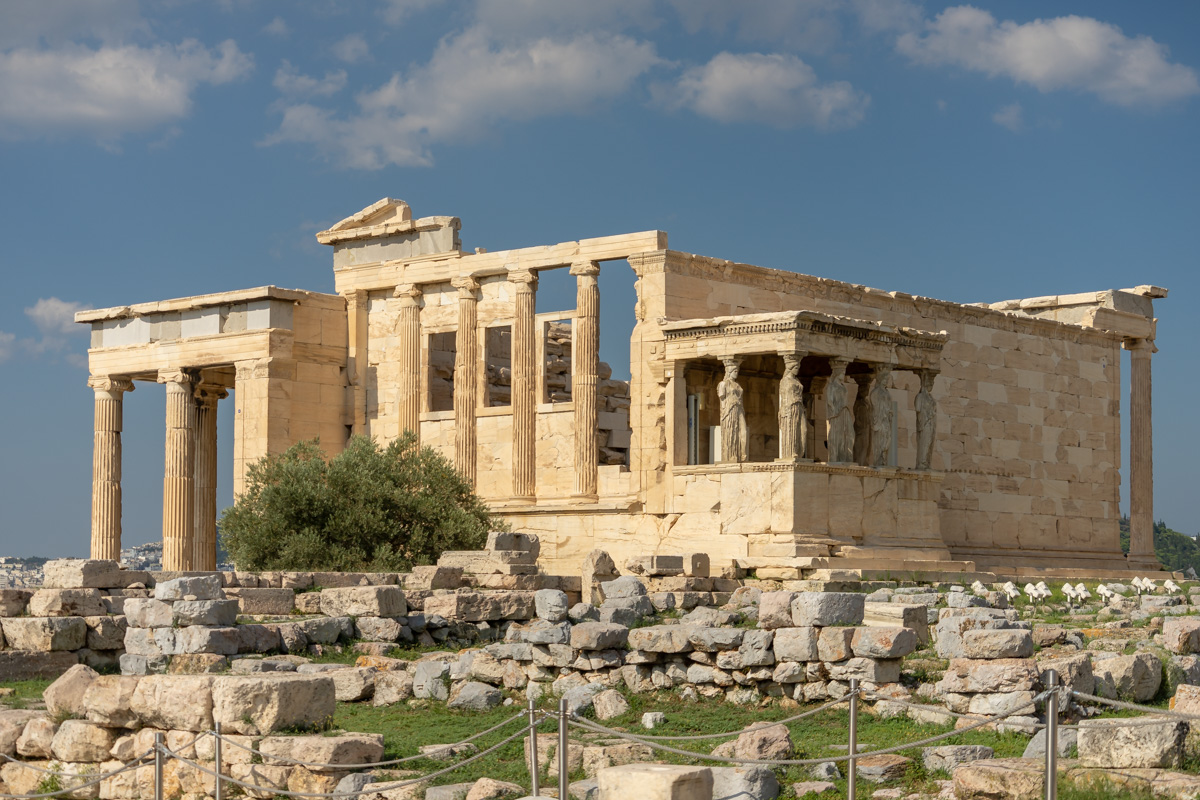 The temple is associated with a number of sacred relics of the Athenians, including the olive tree that sprouted when Athena struck the rock with her spear in her successful rivalry with Poseidon for the city. The present-day tree, seen by the side of Erechtheion, is a nice link to the legend, even though it was only planted a hundred years ago.

“The Porch of the Maidens”, with six caryatids supporting the roof, is easily among the most eye-catching features of the Acropolis. The figures are all replicas, though; the originals are on display at the Acropolis Museum. 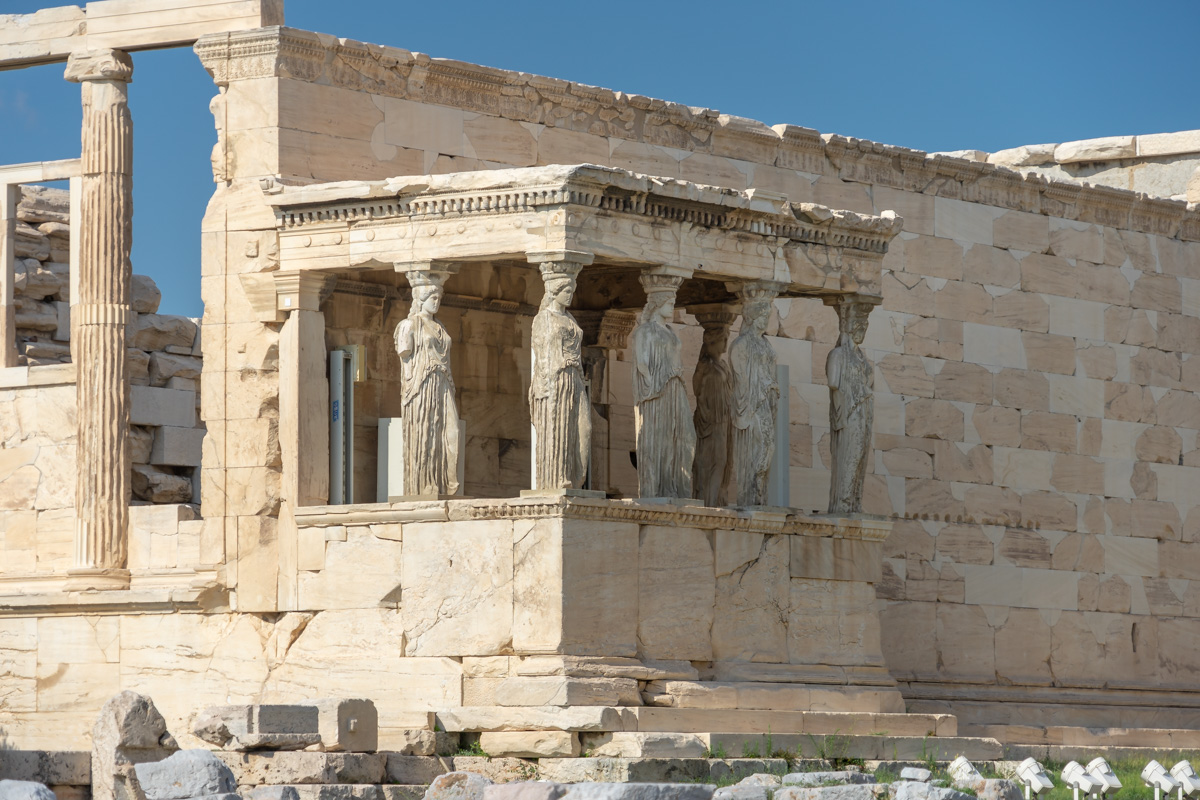 There are several other monuments on the hilltop and the southern slope of Acropolis. These are the remains of the temple of Asclepios. 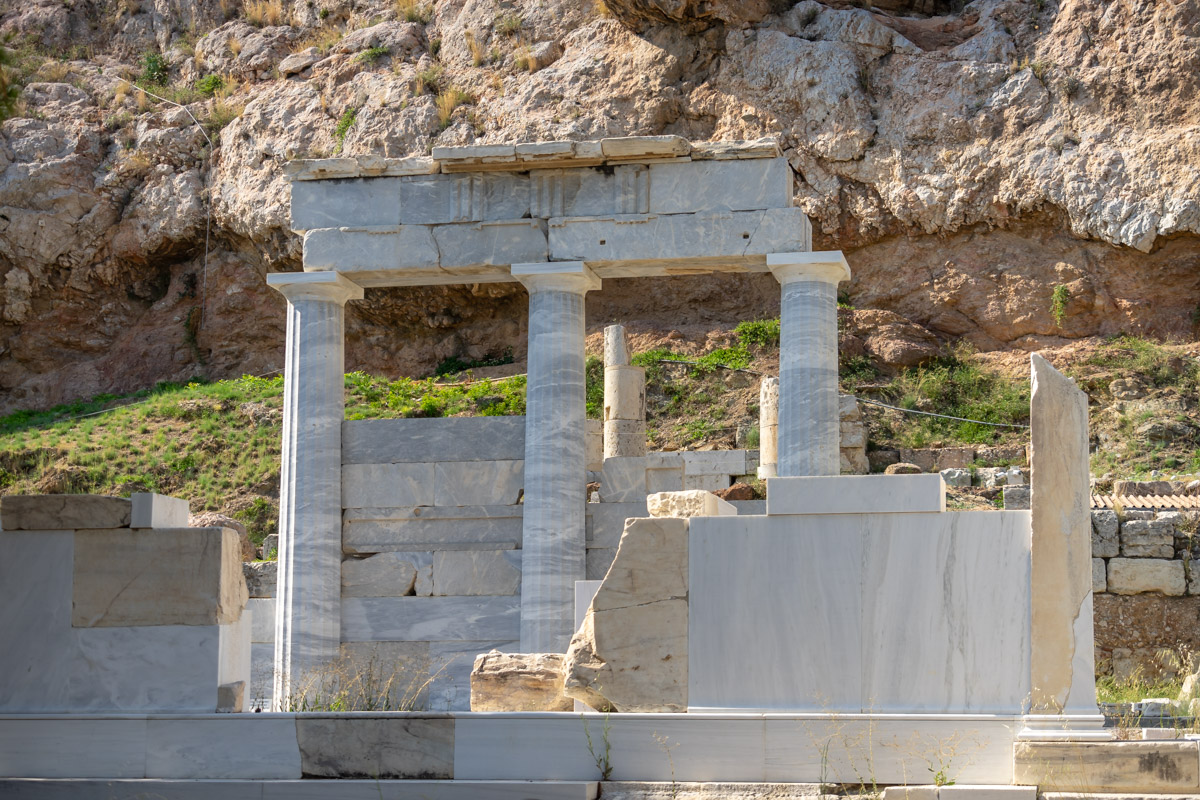 One of the two major theaters, Odeon of Herodes Atticus. 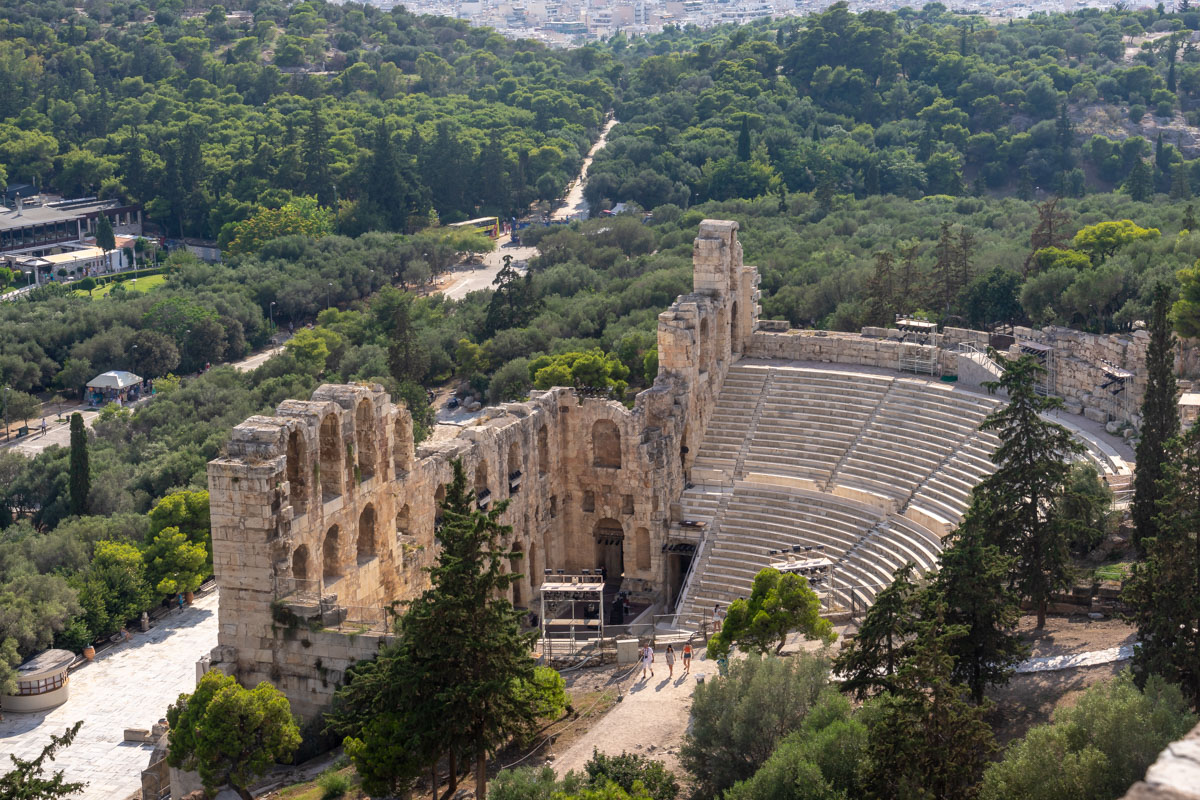 A statue near the Theatre of Dionysus. 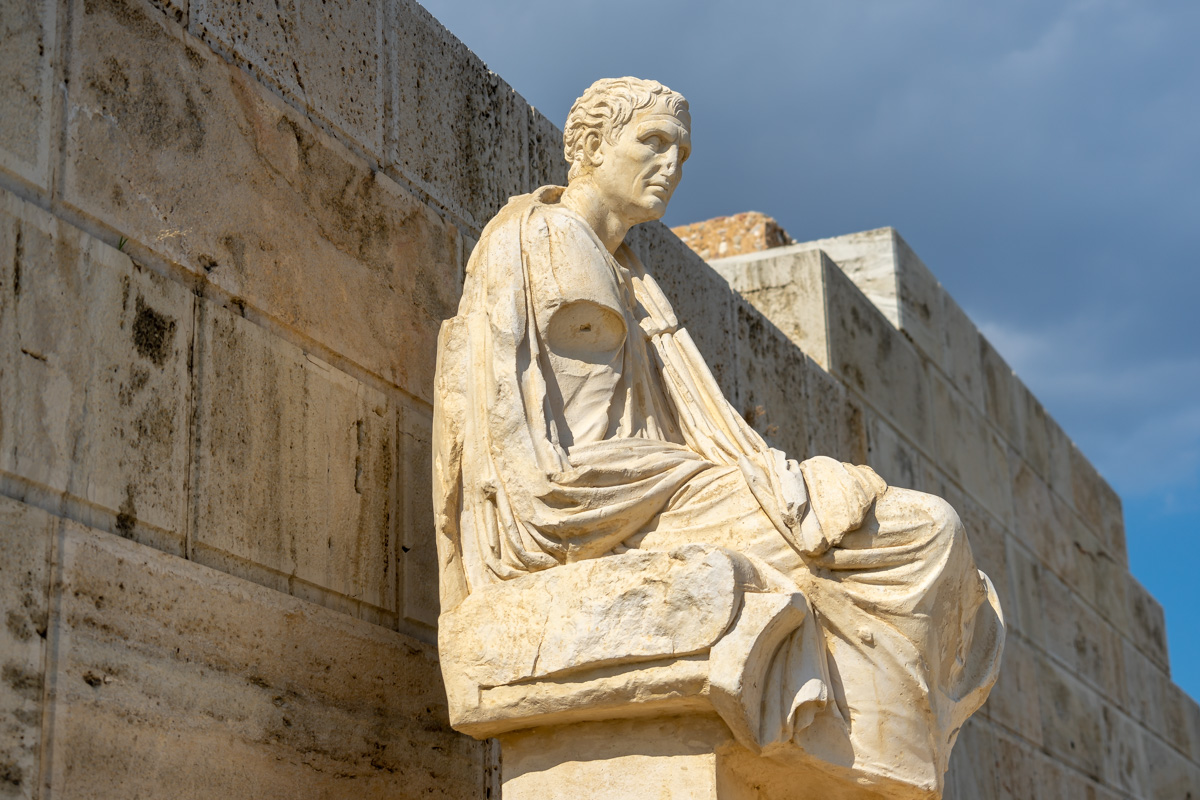 Being in the center of the ancient city, Acropolis offers elevated perspectives on all other points of interest in Athens, such as this familiar to us temple of Olympian Zeus. 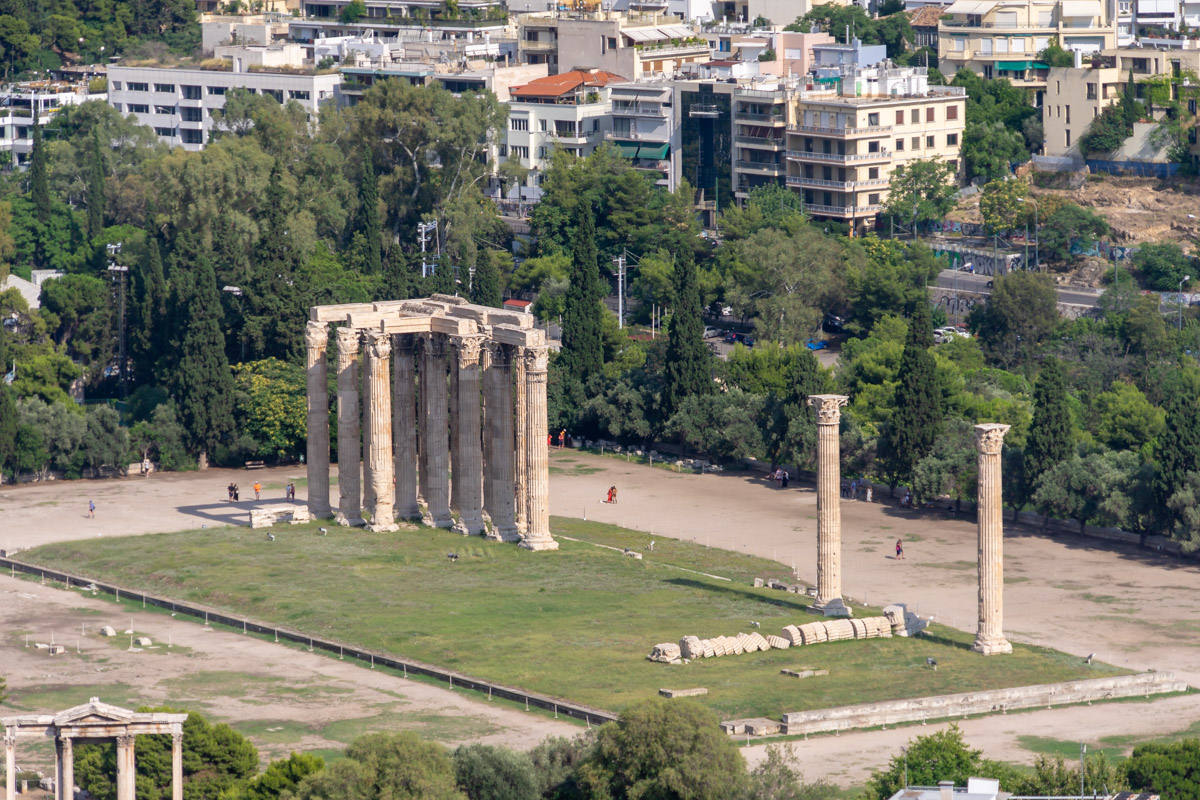 The building in this perspective is the new Acropolis Museum, which is still less than 10 years old. 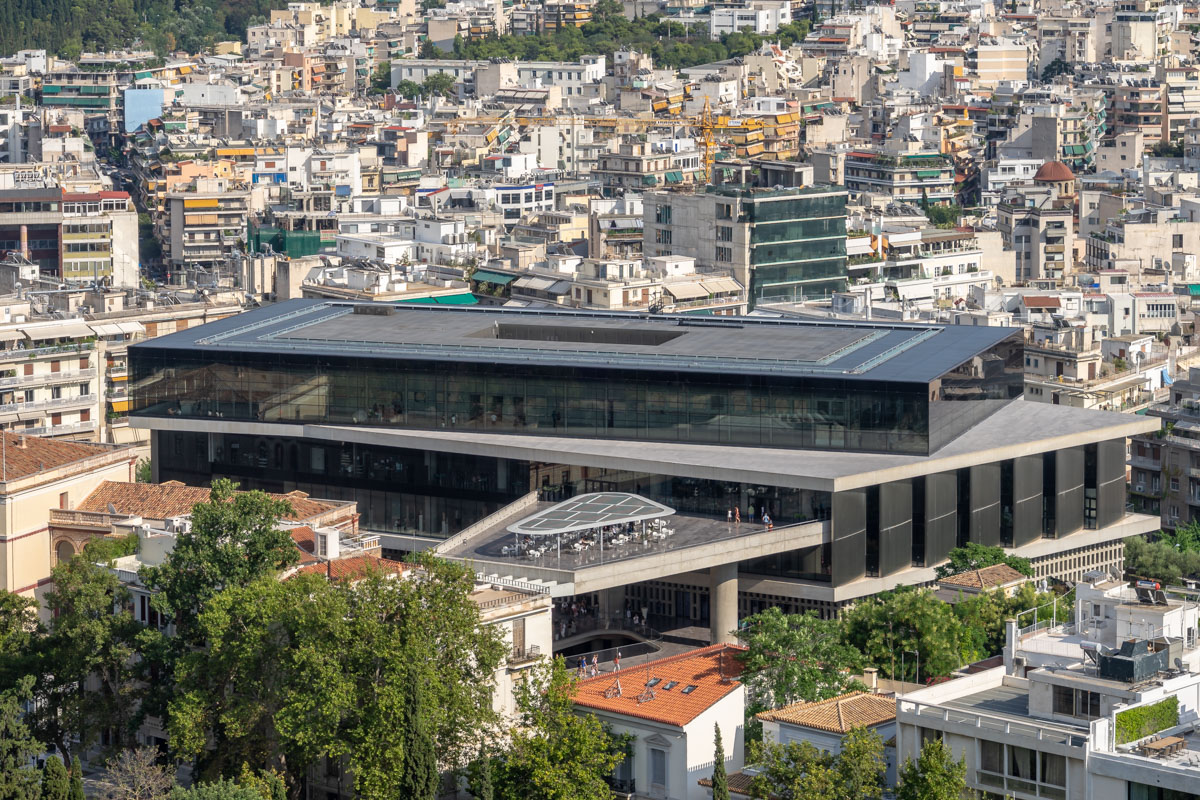 It requires a separate fee to enter and undoubtedly has a lot to offer, but we chose to leave it off our itinerary. The Acropolis treasures that currently reside in the British Museum in London – where we saw them several times during our time of living in the UK – are a gaping hole in the museum’s collection, and the Greek government have been waging an understated battle for over three decades now to have them returned to their rightful home. When they are returned to Greece, the museum will become an essential companion to the World Heritage site.

A perspective towards Mount Lycabettus. 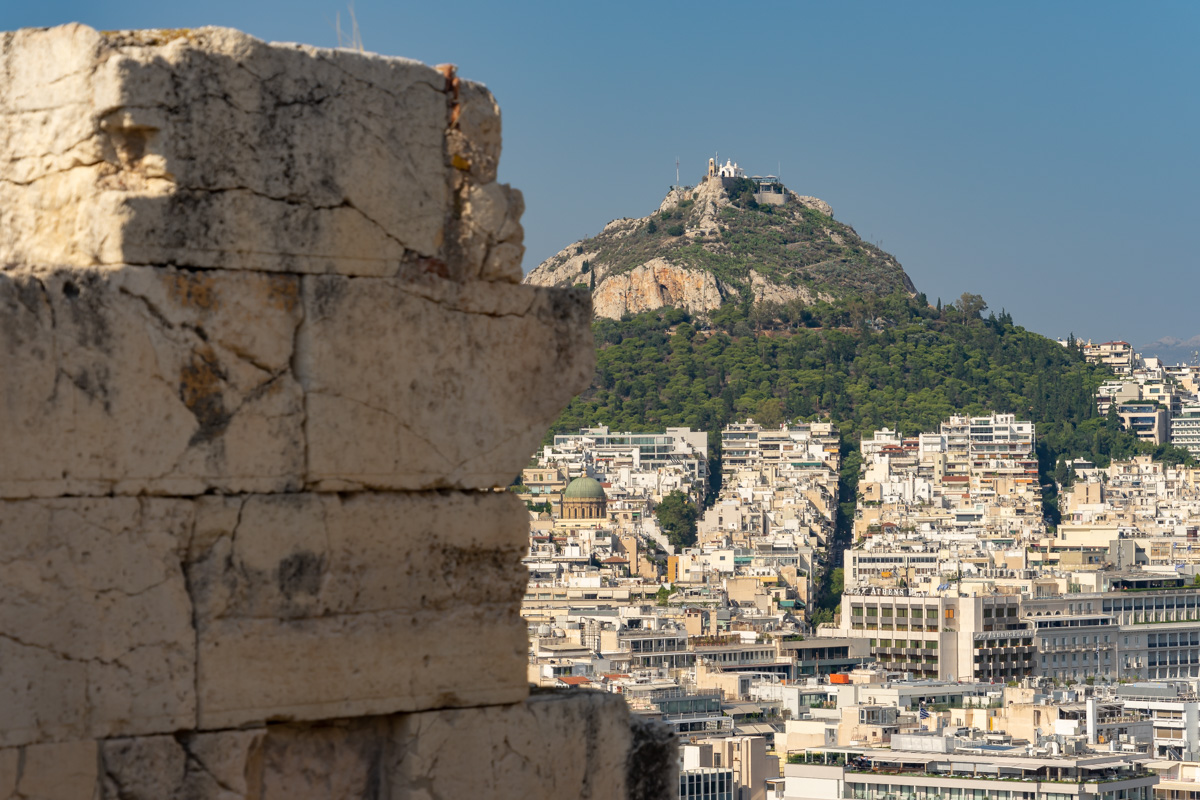 And a dawn view towards both Acropolis and Lycabettus from another high hill, Philopappos. 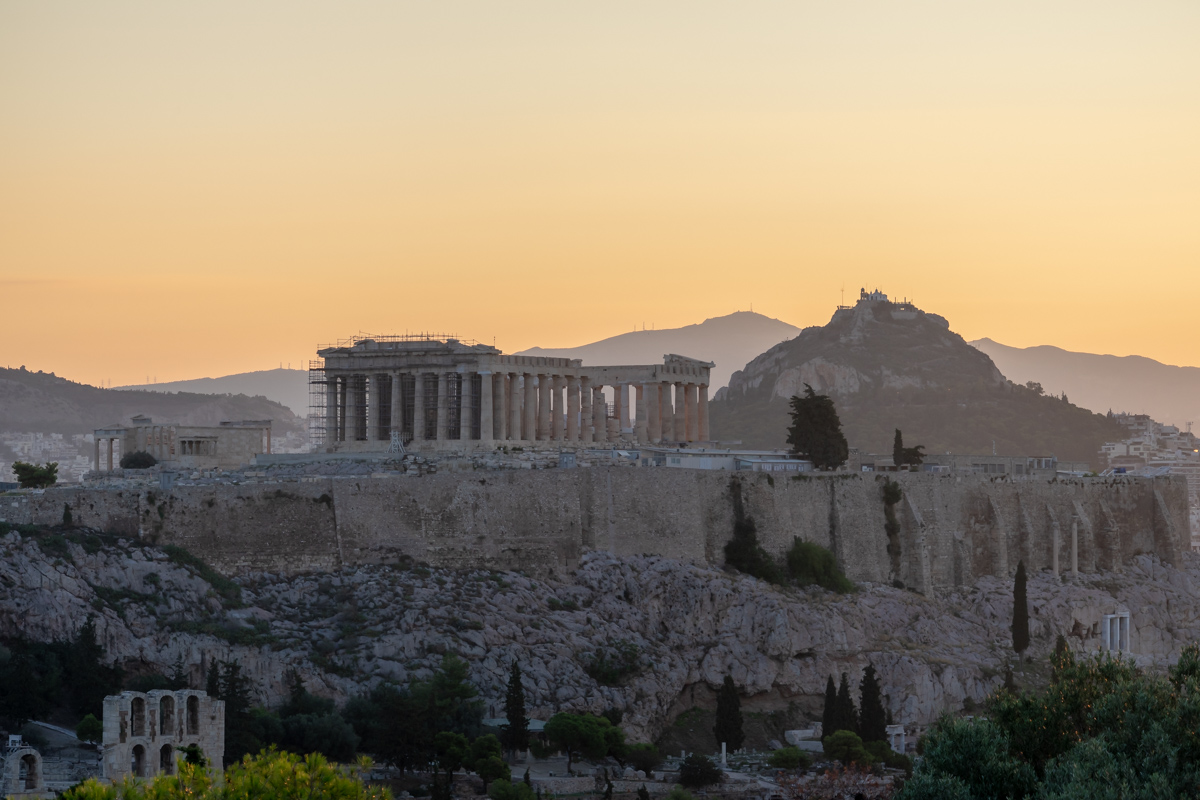 Acropolis is the focal point of Athens, unmissable if you spend any time in the city. Ticket lines can get pretty long in the middle of the day, so either come right before the opening or wait until 5pm or so; only right after the opening and right before the closing time will you have a chance of not sharing the site with hundreds of other tourists. Of the two main entrances, the southern one has shorter lines at all times of the day. Minimum of one hour is needed to see all there is to see; if you let the awe overtake you, it could be quite longer.