Crete is a huge island, impossible to cover in much detail in less than a week’s time. We did not attempt anything of the kind. Our time on Crete was planned with a slant towards beach-going, with only a few of hours of sightseeing on any given day (including a few non-trivial drives). We stayed roughly in the Heraklion prefecture, only skimming the edges of Rethymno and Lasithi, and never venturing west to Chania, leaving ourselves a large scope for a future return visit.

Of course, I left my camera behind almost every time we went to the beach, so there aren’t many beachside photographs that I can share. Only on Matala Beach, on the southern coast, I took a couple of pictures, such as this 2-shot panorama that takes in the Caves of Matala, which trace their history from the Neolithic Age, but are probably more famous as the location of a hippie colony in 1960’s. Joni Mitchell even wrote a song about that. 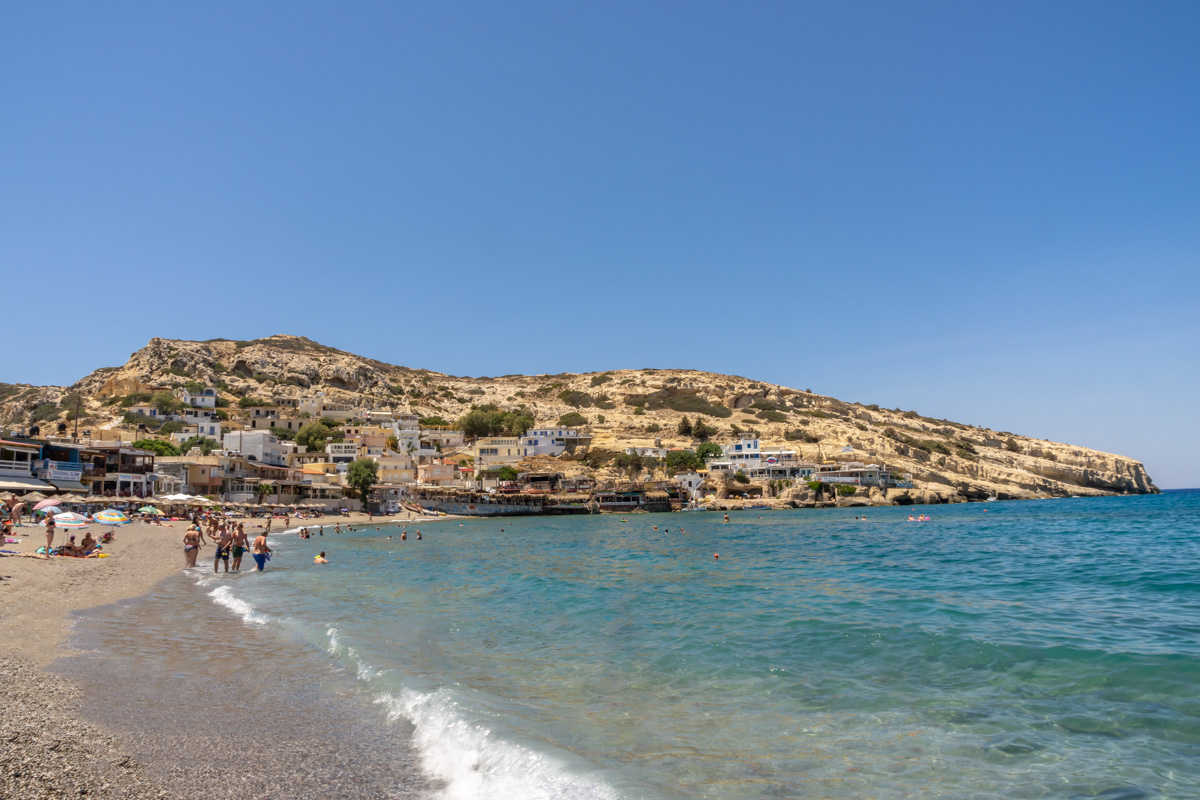 On a drive to another beach we went through Kourtaliotiko Gorge. At one strategic point, we descended to its bottom. 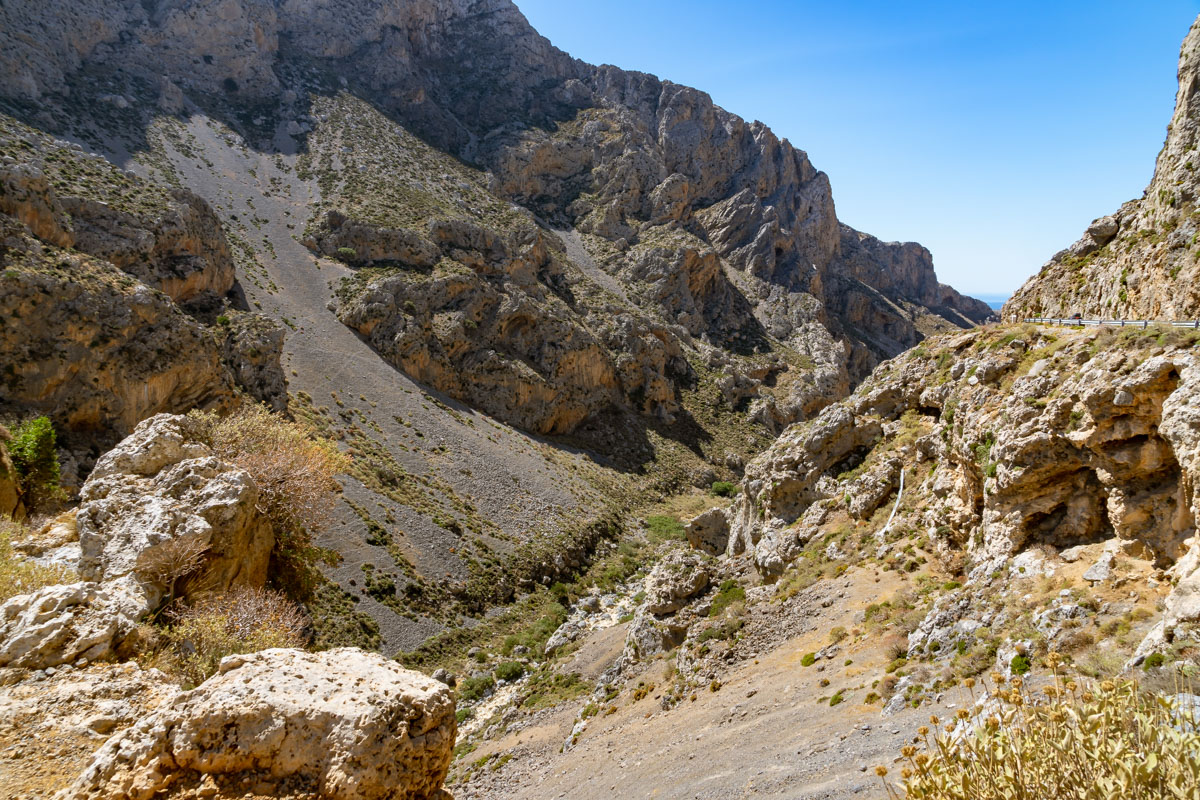 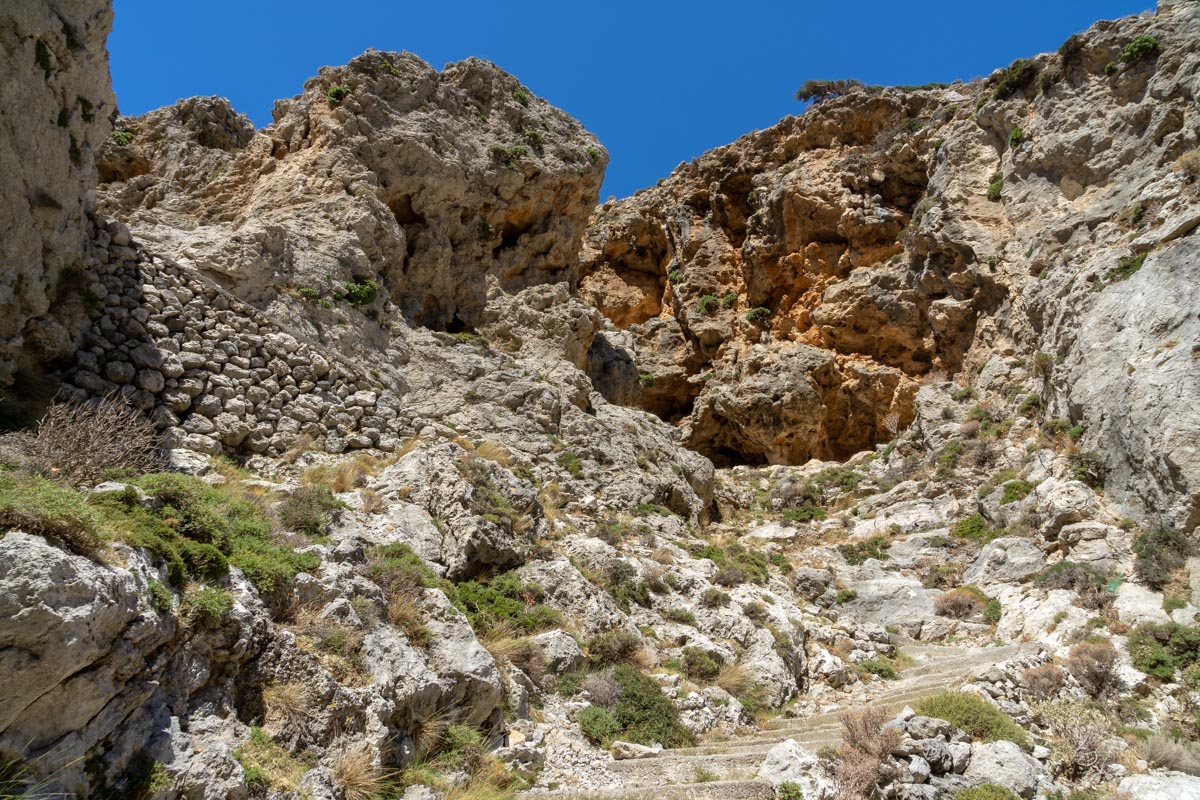 Hiking is not exactly our thing, but the descent here was facilitated by a stairway leading down to the church of Saint Nicholas the Kourtaliotiko. 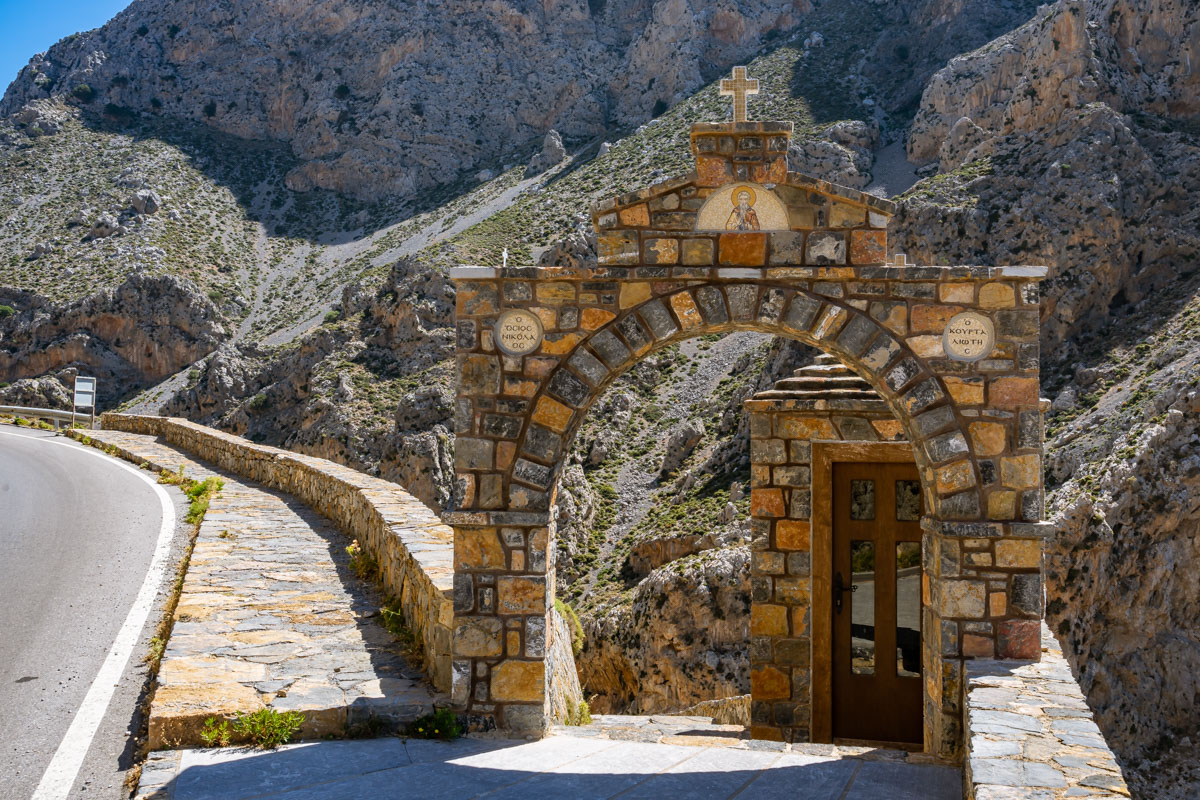 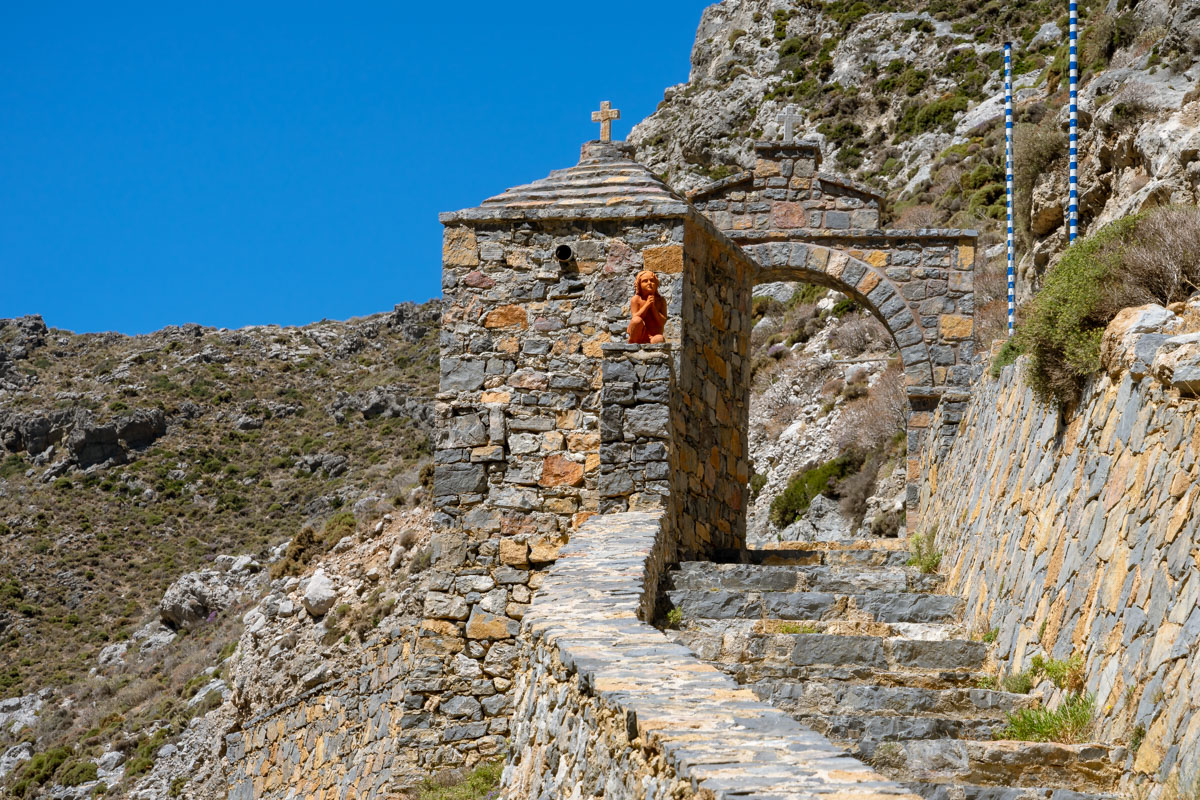 The church near the gorge floor is of the kind that is found all over Greece, small, white, and minimally decorated. 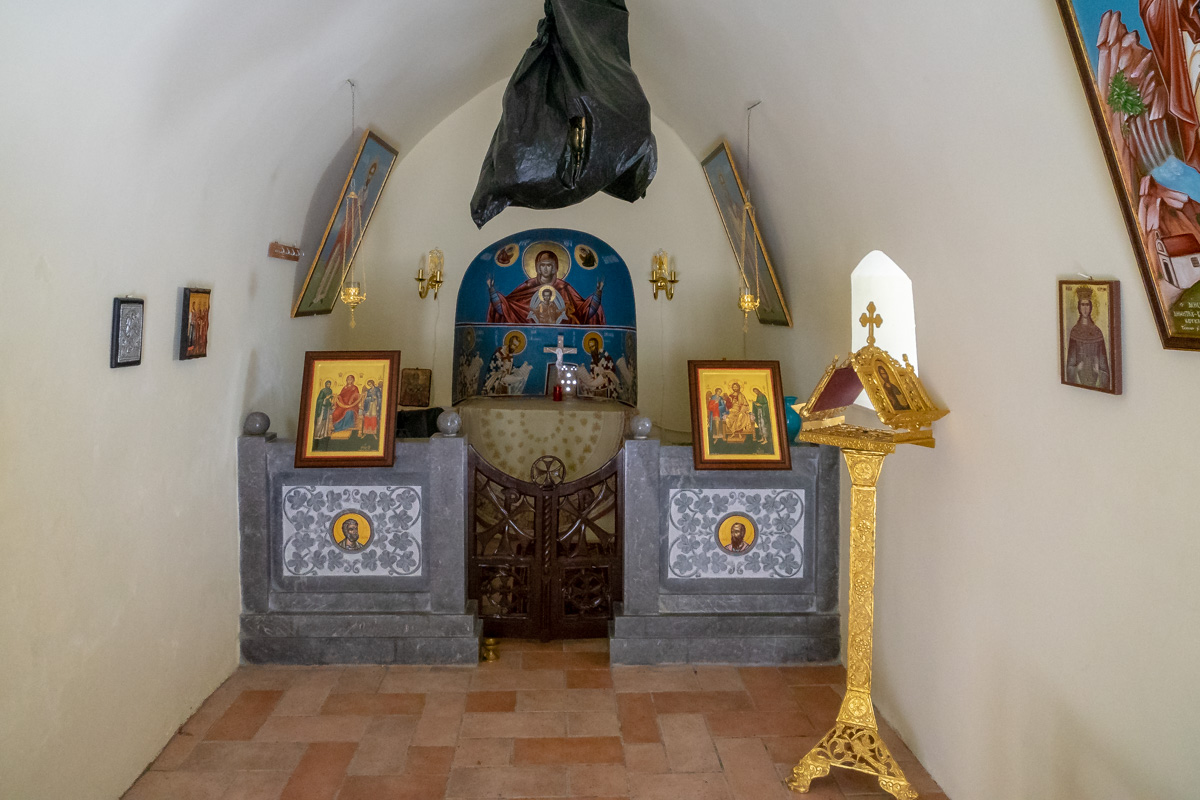 The Instagram-driven fad of rock stacking is taken to an extreme on a terrace near the bottom of the gorge. 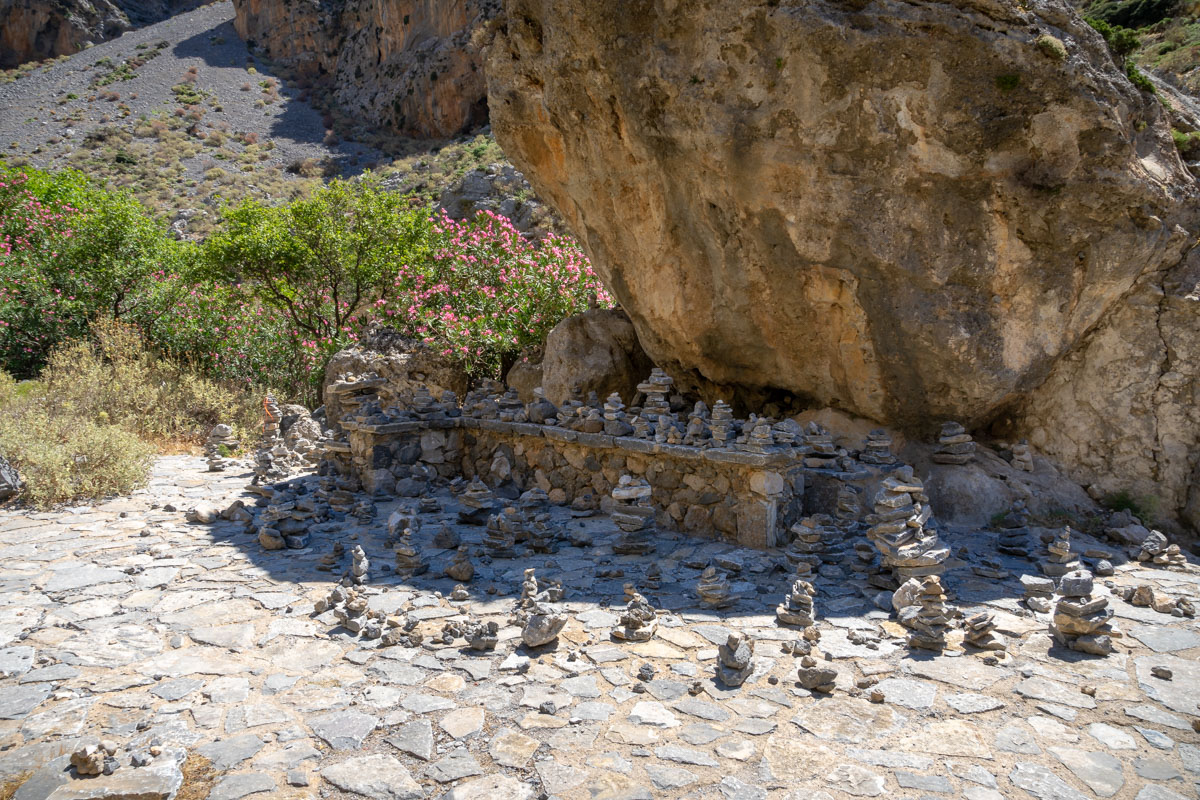 We refrained from contributing to the display.

Another church is hiding under the rock overhang by the side of the road that runs through the gorge. 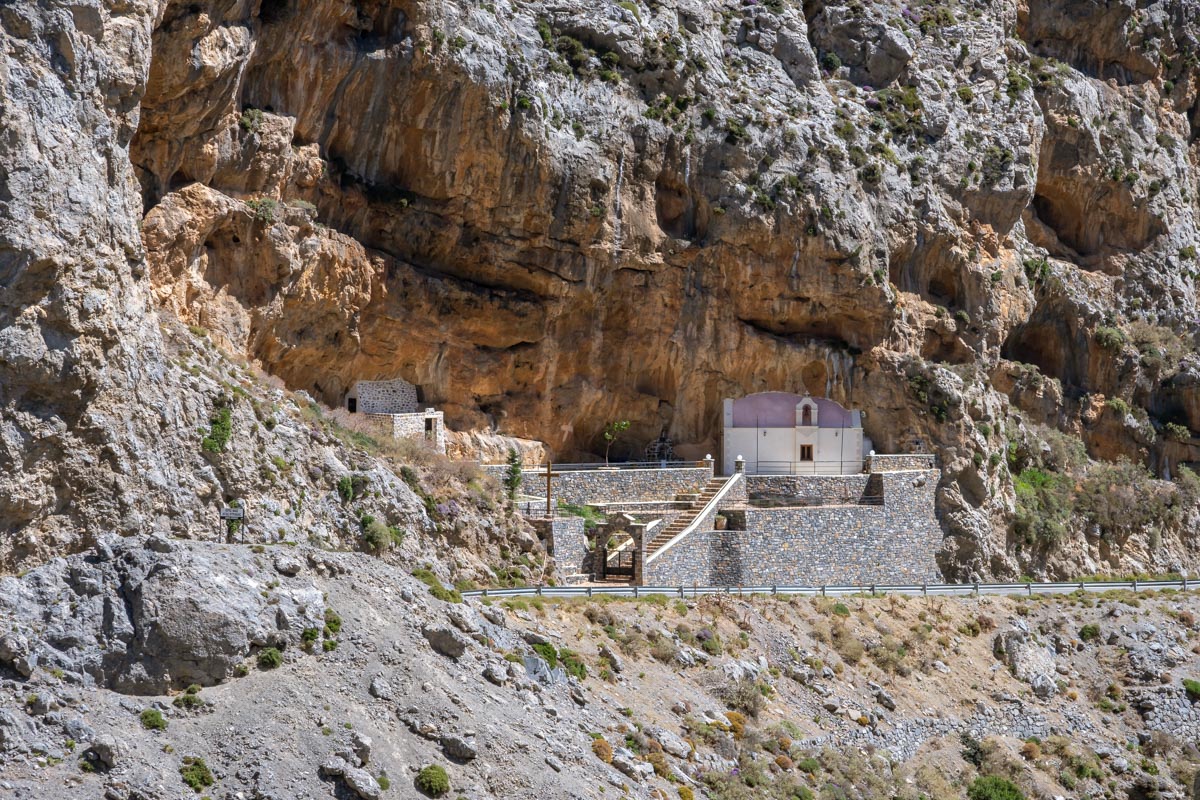 One other location where we lingered for a period of time was Spili, a relatively un-touristy mountain village with walkable historic core. 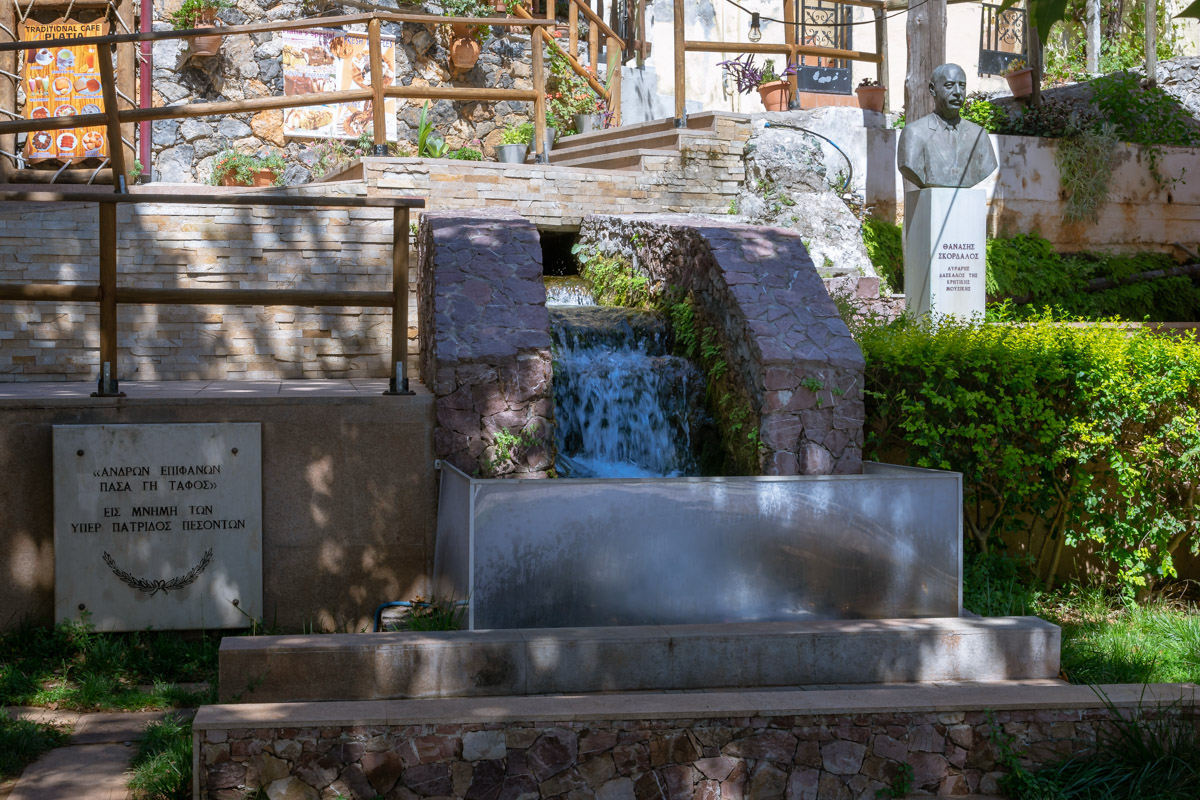 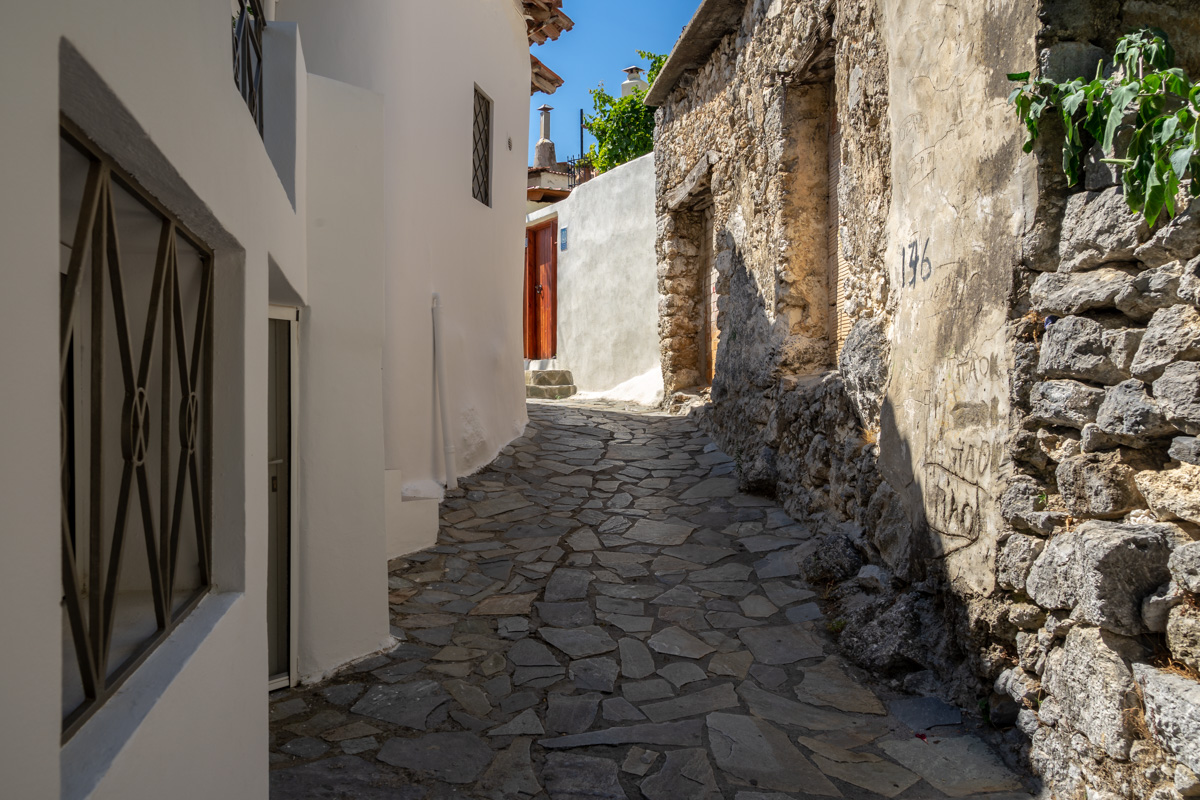 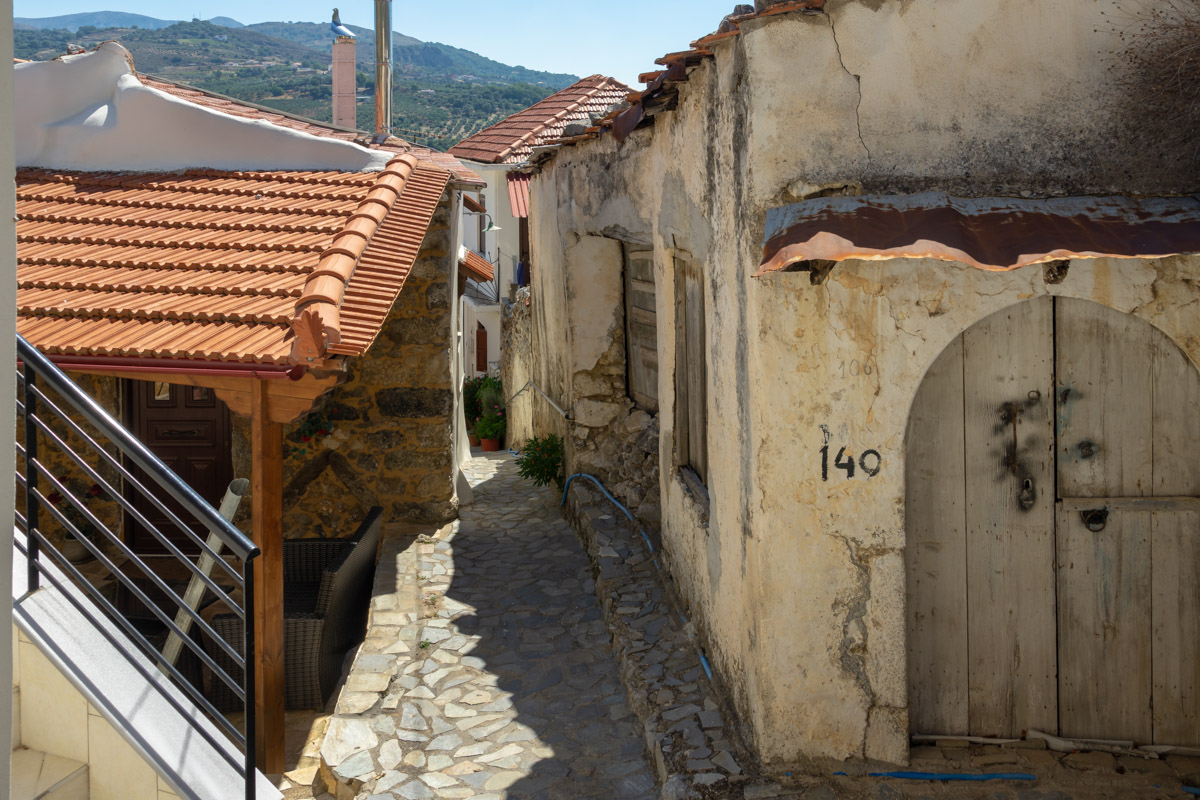 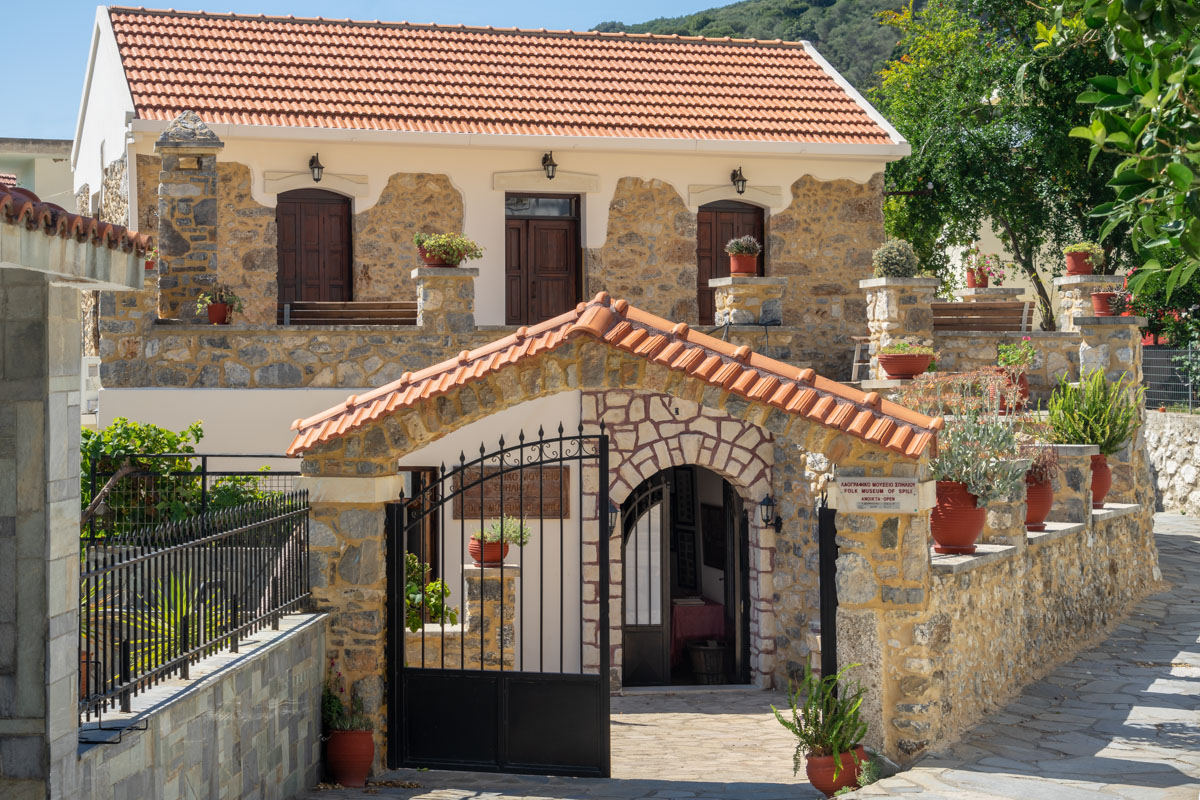 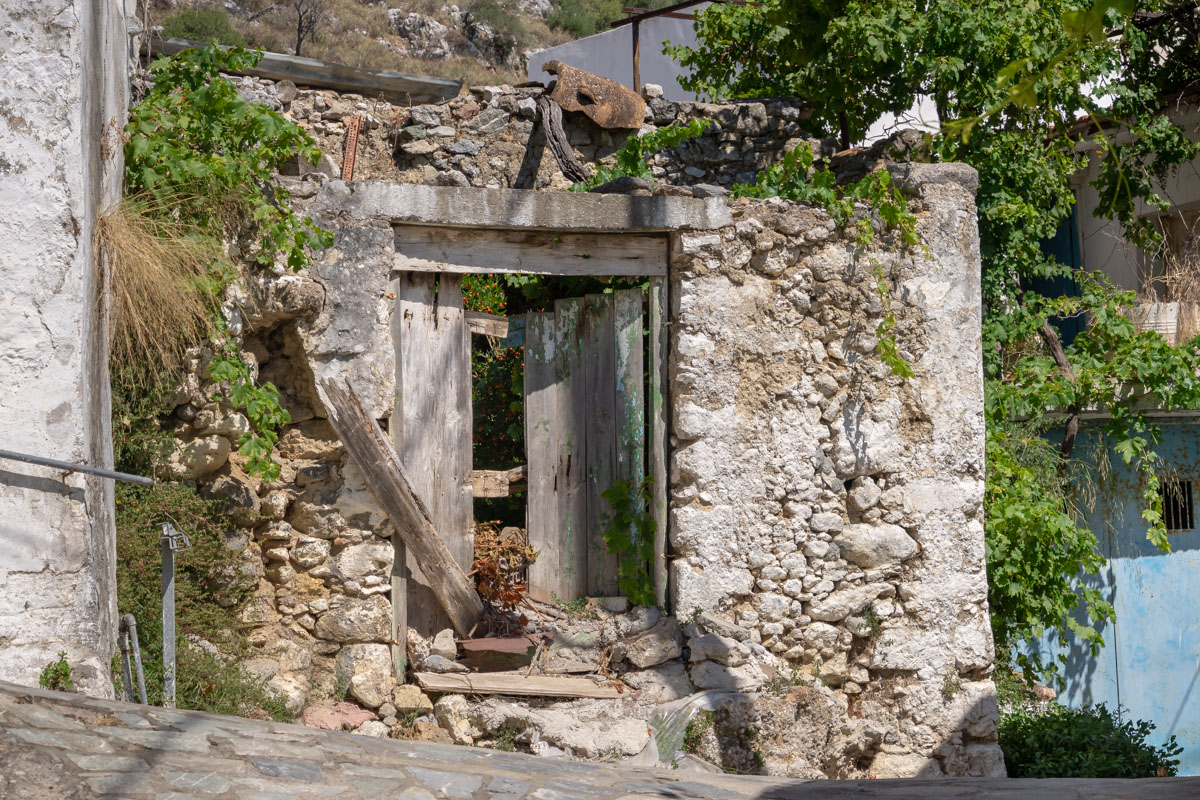 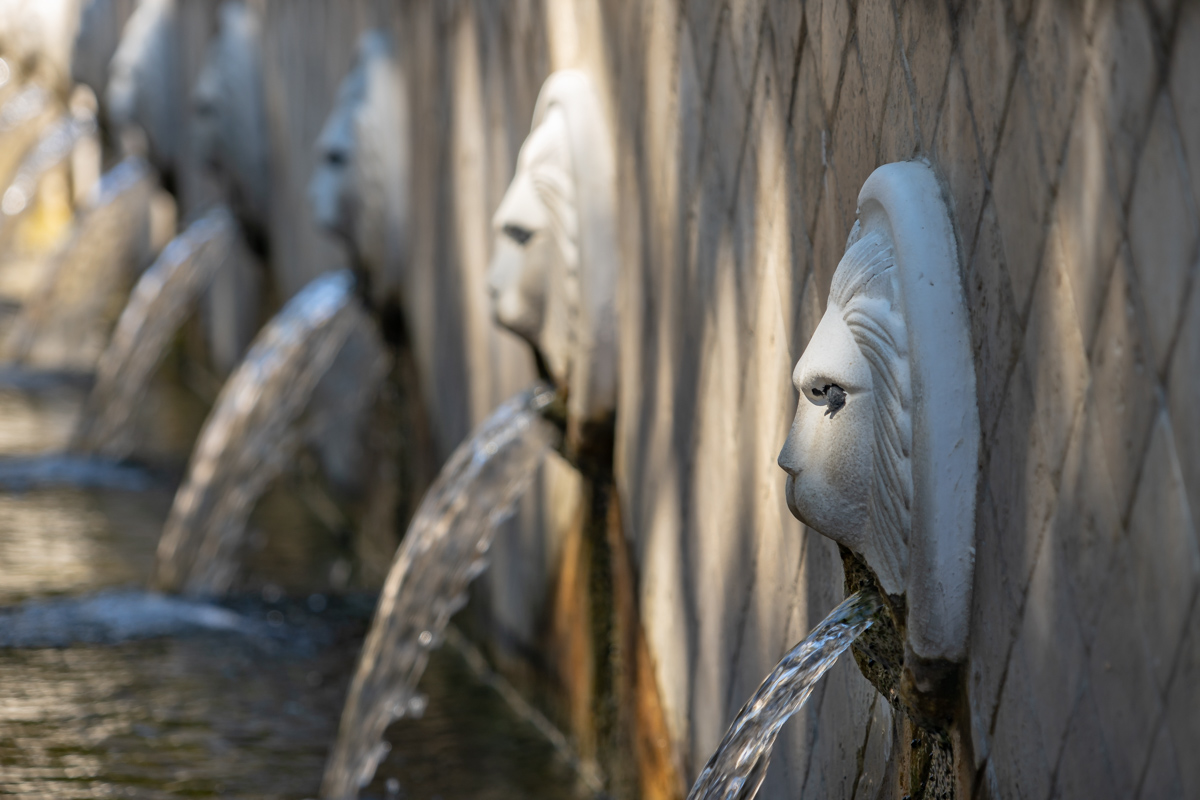 We walked along picturesque streets, sat down for refreshments at a café on a leafy small central square, and then drove on towards our next beach target.