The historical province of Périgord, which roughly corresponds to the modern Dordogne department, is informally divided into 4 “colors”. Our base was in the southeastern Black Périgord, where the flow of the Dordogne river is the most picturesque, and the places like Sarlat, Beynac, La Roque-Gageac, Belvès, and others are located. The Vézère valley is also part of the Black Périgord, encroaching onto the larger central region called White. The latter is anchored by Périgueux. The southwestern part carries the name of Purple Périgord – we only skirted its edge, spending time in Monpazier and making a couple of other quick stops.

The northernmost Green Périgord has not featured on our itinerary until the last day in Dordogne. As we started our trek towards Paris, we stopped on the way in the wonderful village of Brantôme.

The defining topographical feature of Brantôme is that its core is located on an island formed by two branches of the river Dronne. The village grew outward in time, but its most picturesque perspectives remain along the island edges towards the local abbey. 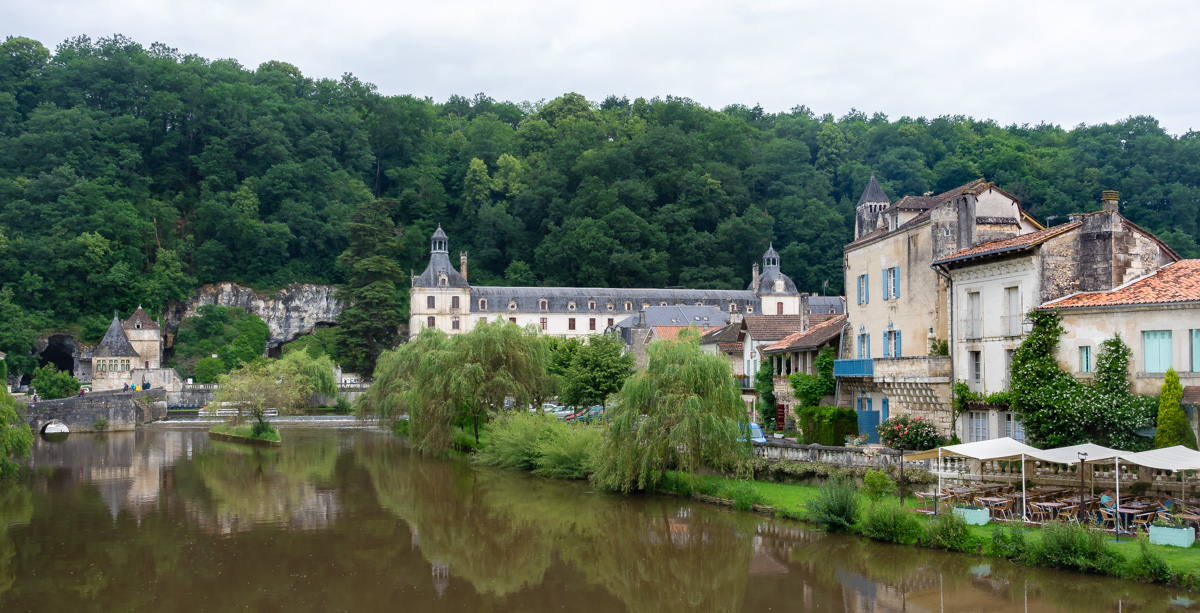 The abbey was founded by Charlemagne himself in the 8th century. Most recently rebuilt in the 15th century, it ceased to be a functioning abbey after the French Revolution. 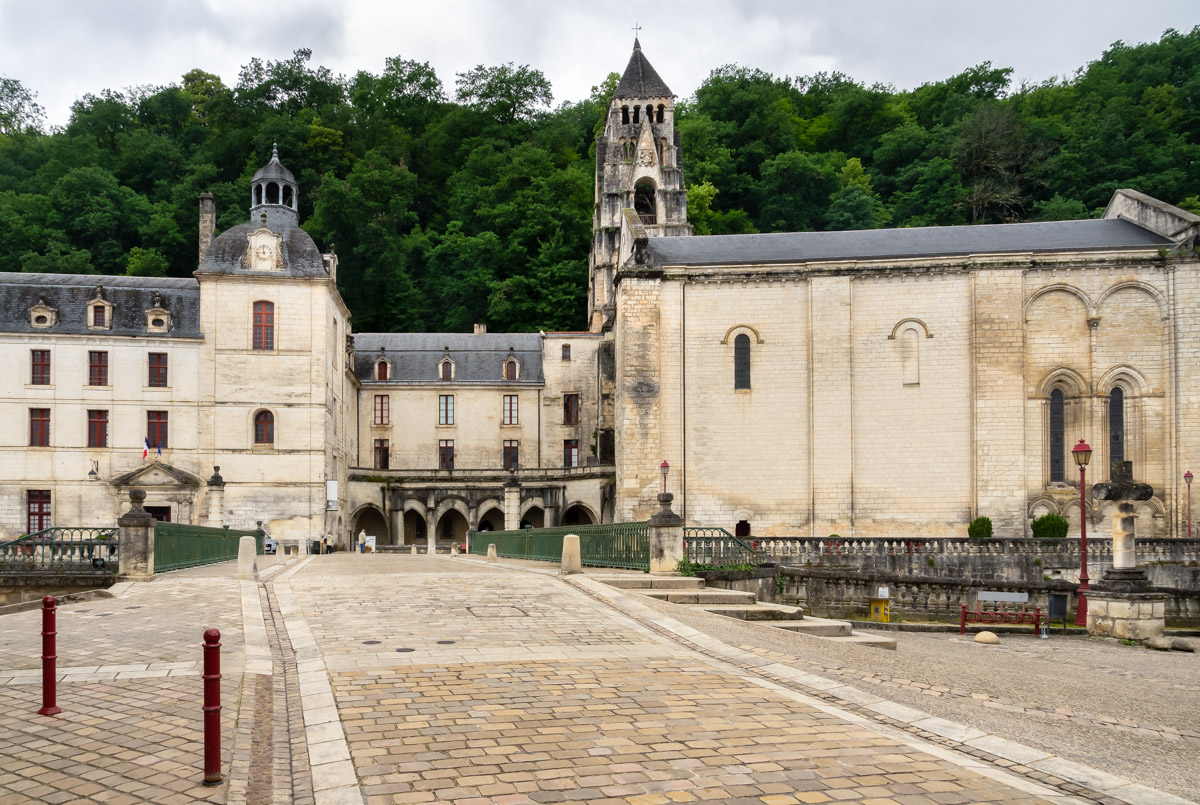 The beautiful Romanesque tower, partially built into the rock outcroppings, is a claimant to the title of being the oldest in France.

I did not travel with wide-angle lenses on this trip, so the above picture represents the widest perspective of the abbey I could get in a single shot. Without too much thought, I then took a couple of other fragments of the eye-catching ensemble from the same spot with the same focal length. That allowed me to stitch the following panorama, a bit distorted, but still pretty awesome.

The Renaissance part of the complex is nowadays the City Hall.

The abbey church has a couple of outstanding and curious interior features. 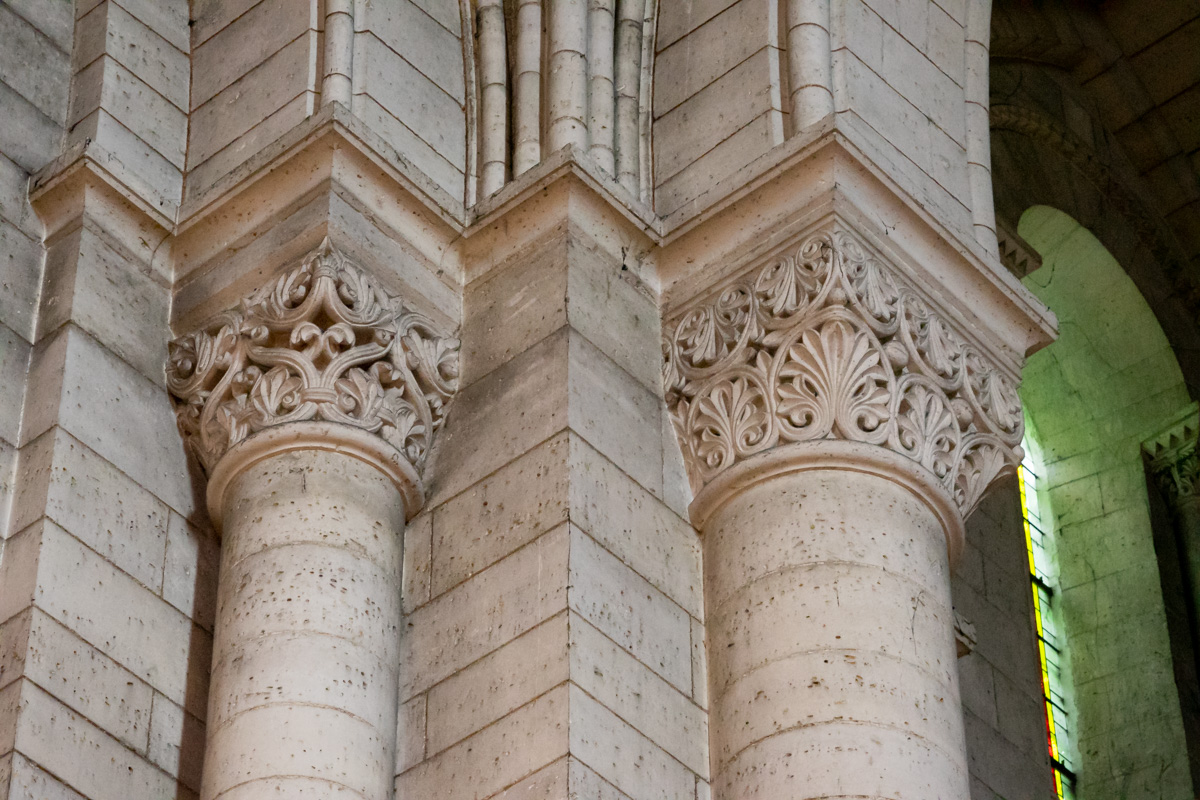 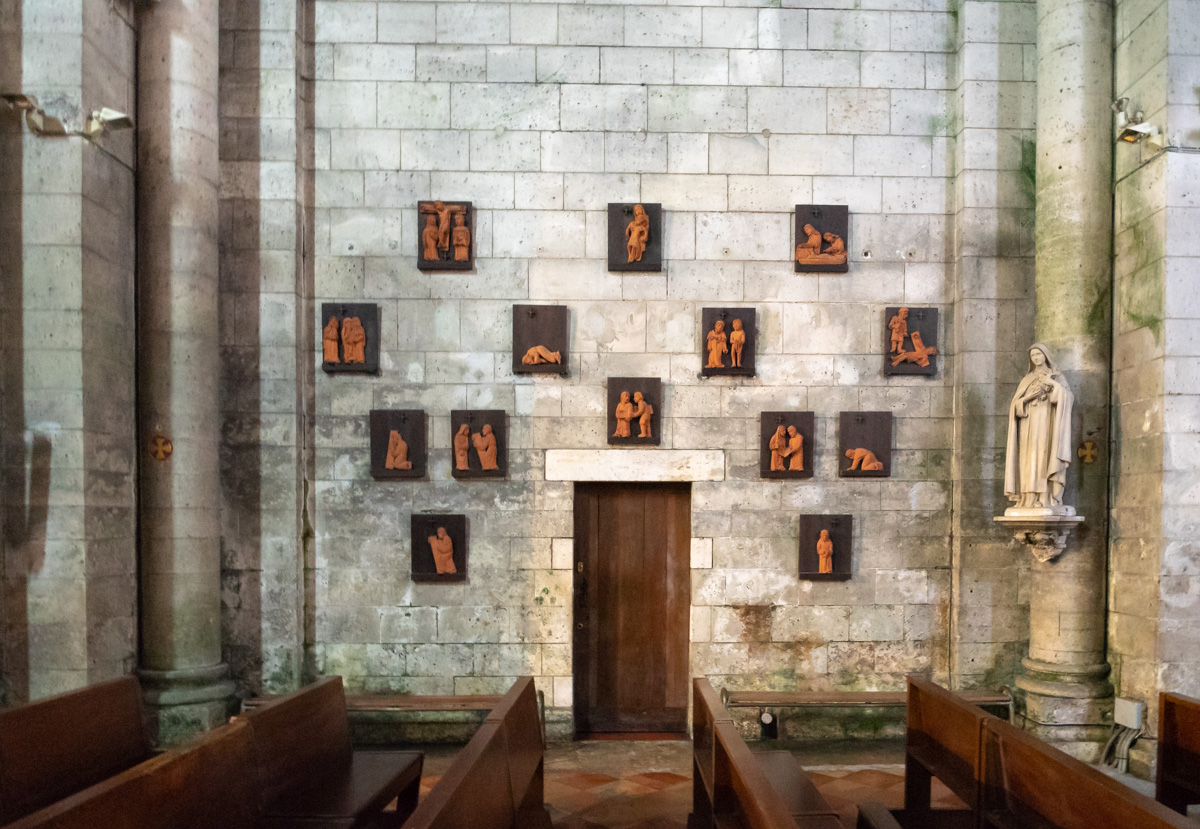 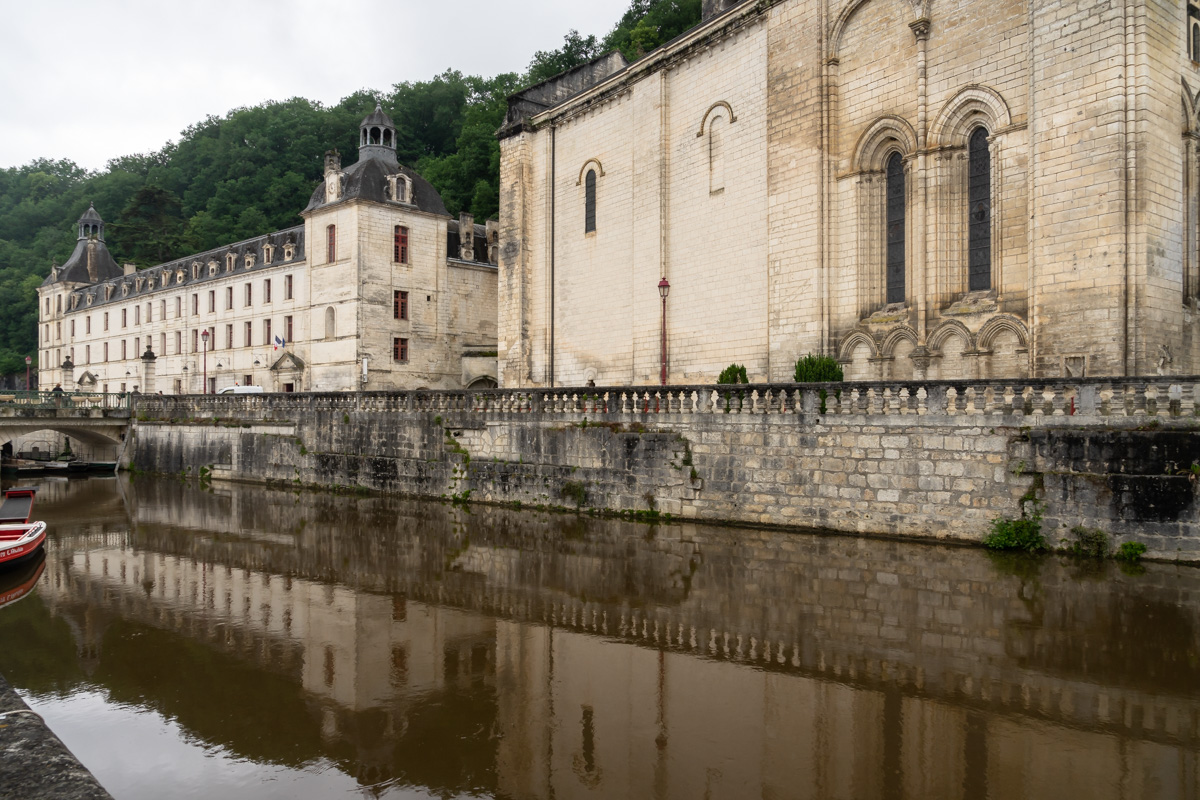 A few other perspectives and fragments of Brantôme. 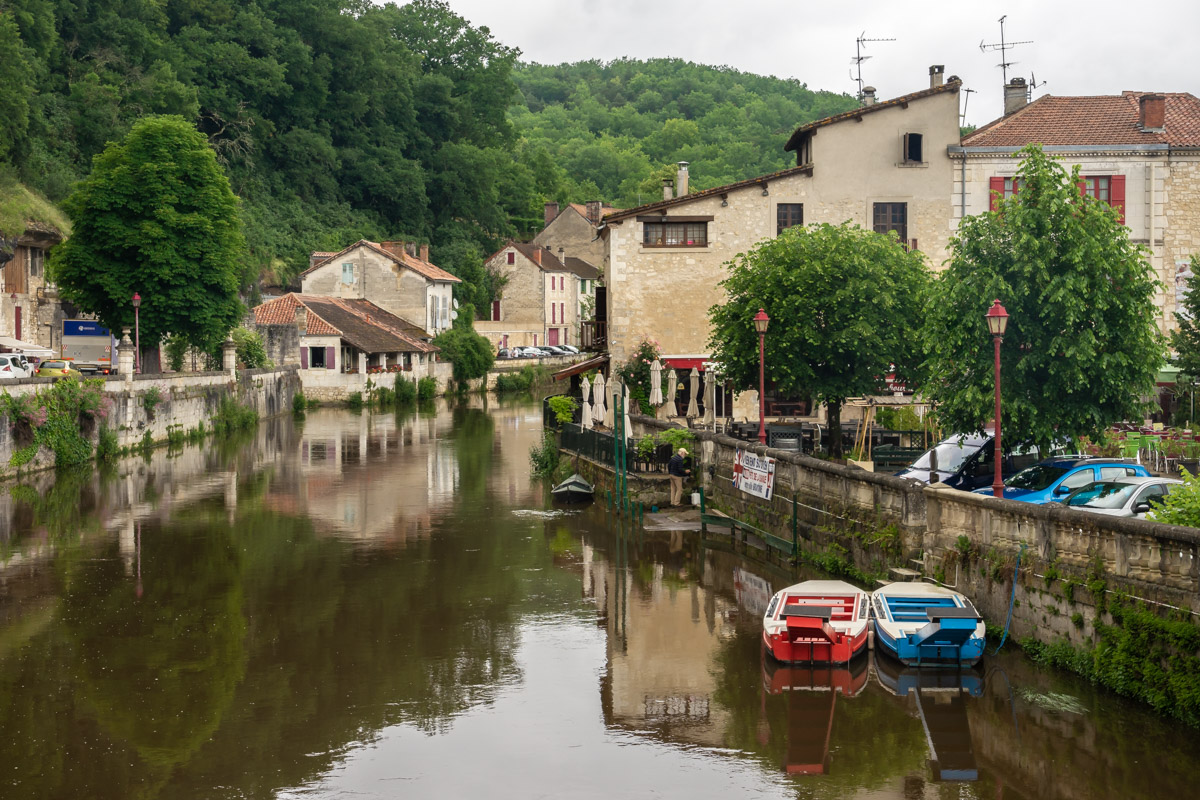 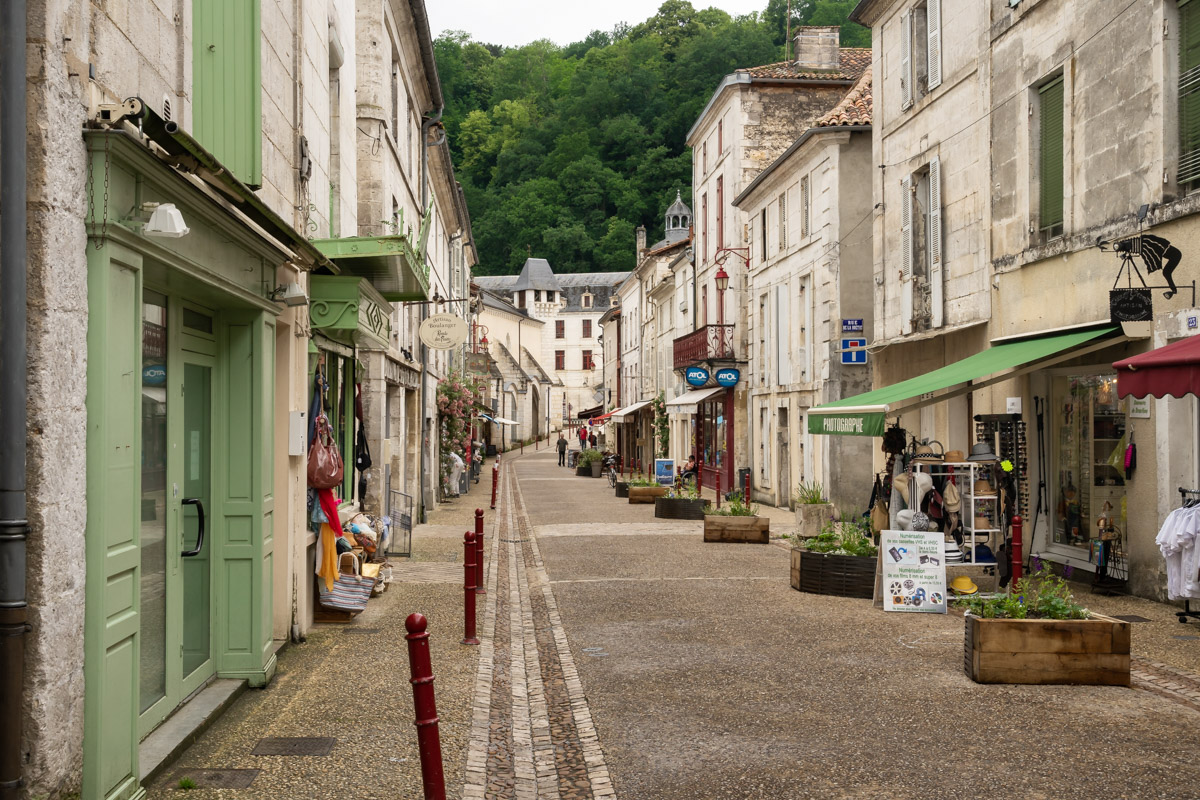 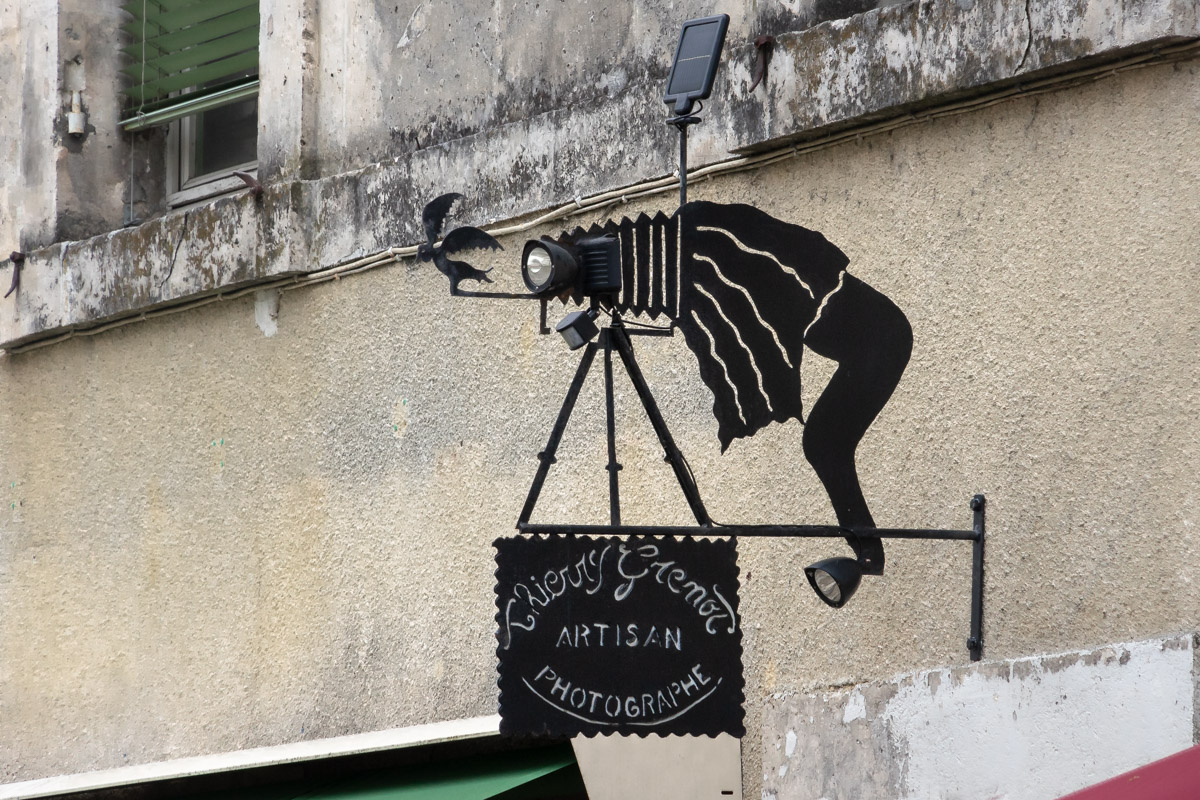 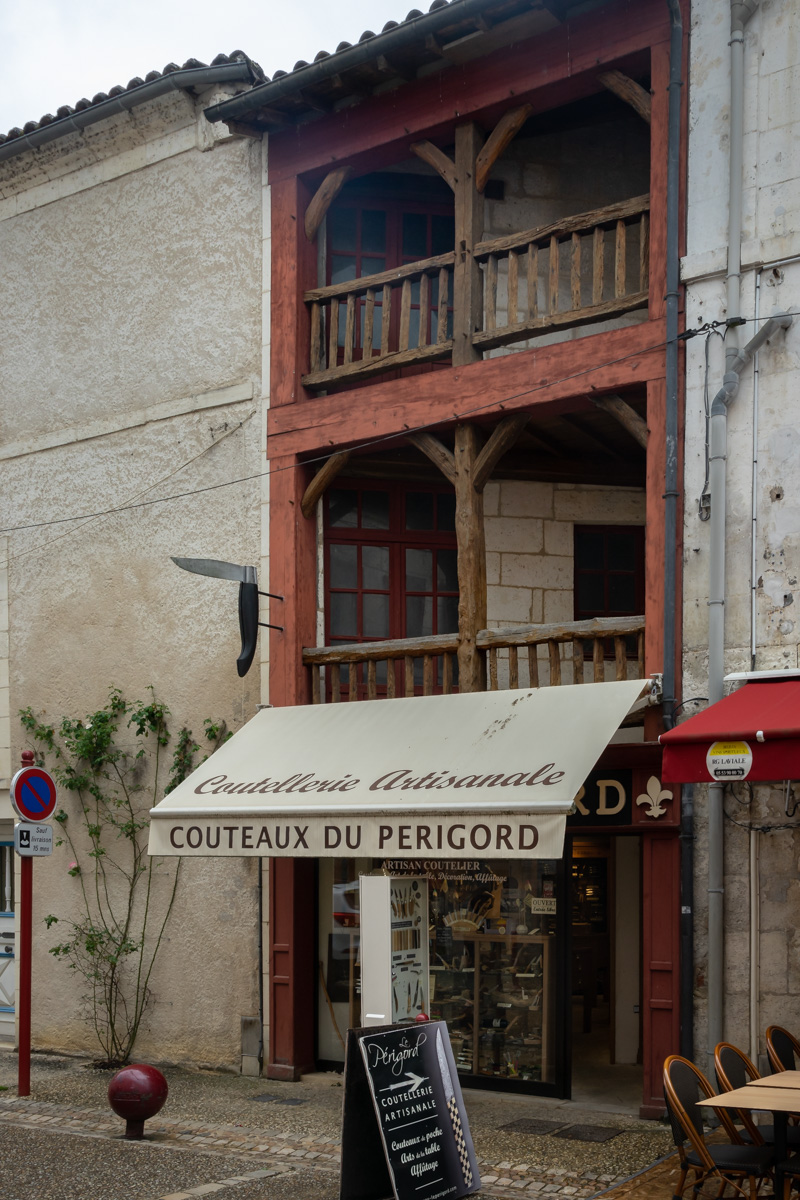 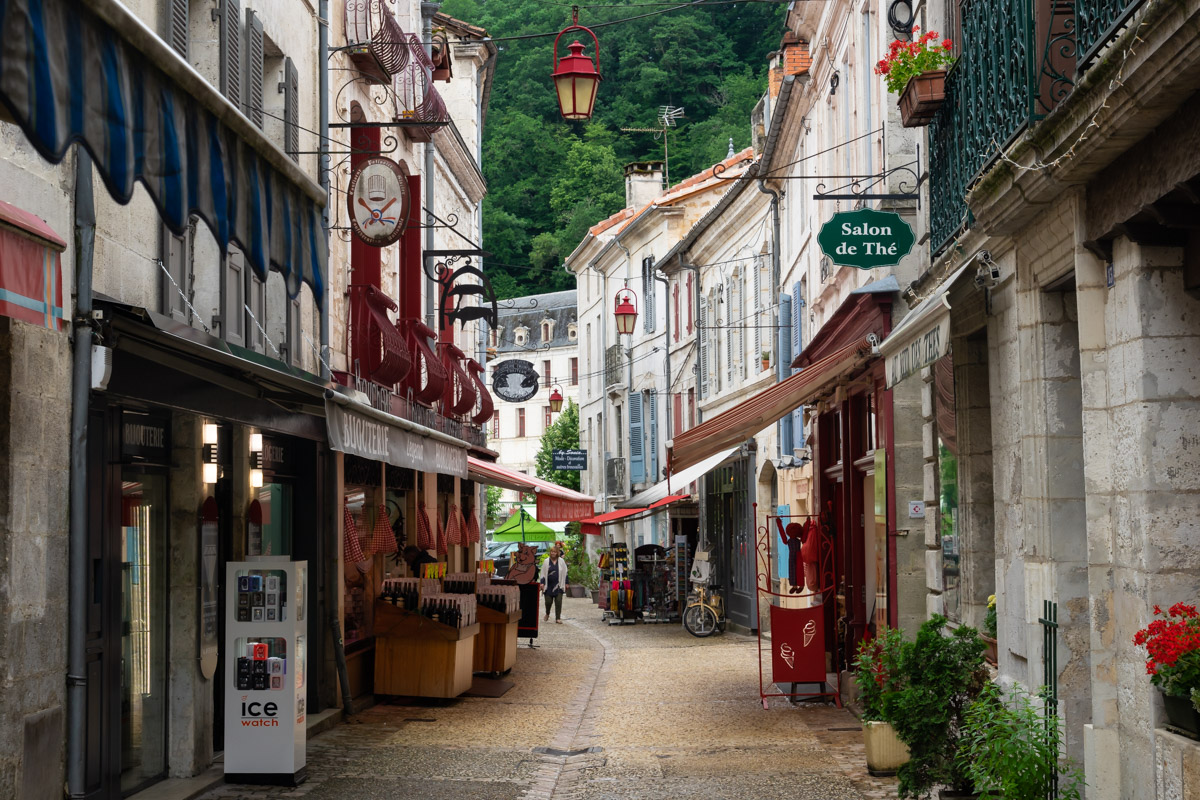 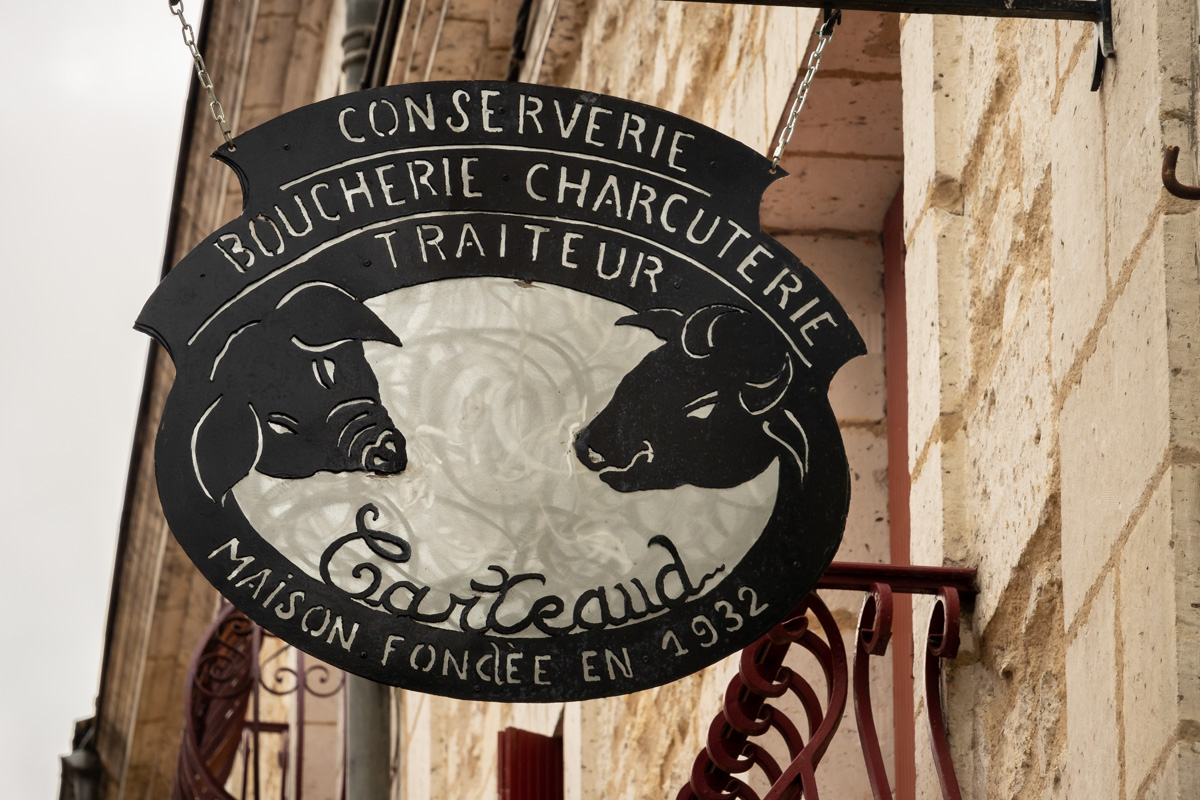 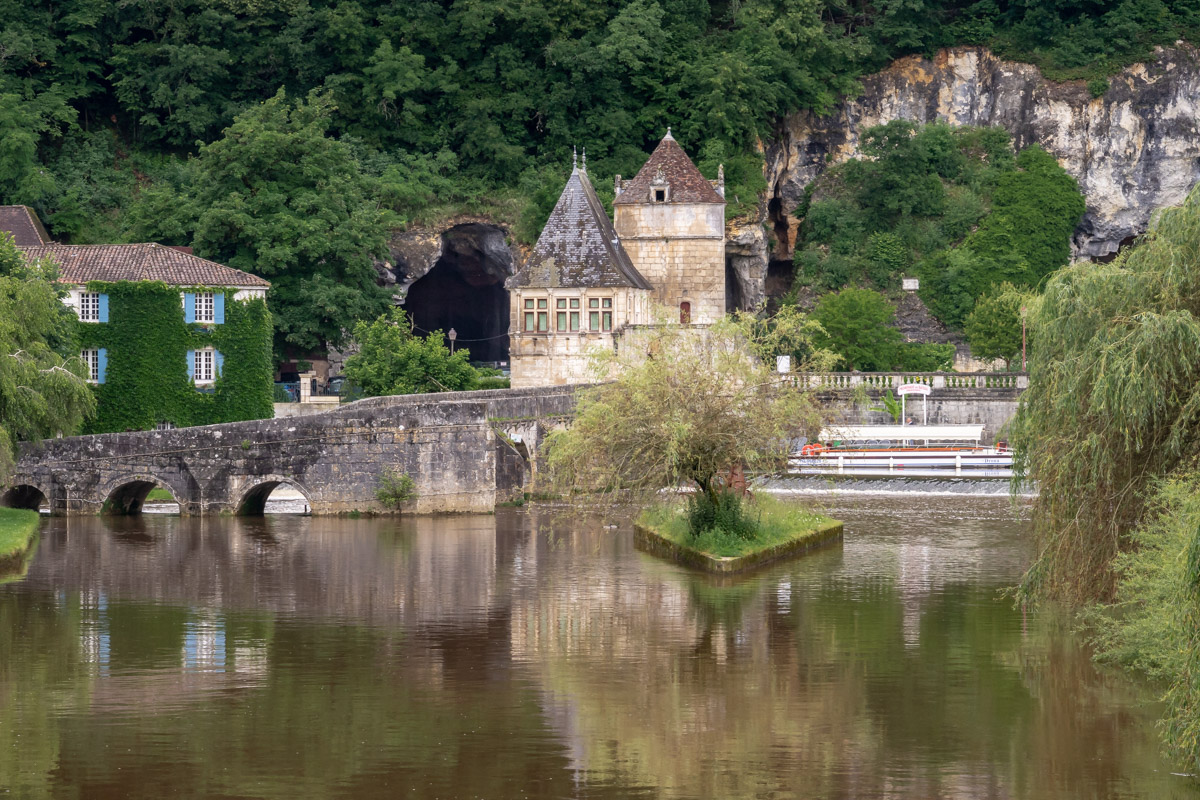 Another view of Quai Bertin on the southwest edge of the island.

The quasi-panorama above is stitched from just 2 shots, taken with no panoramic intention in mind. It is a weird coincidence that I ended with two of these on the same day and in the same village, and none elsewhere.

The quay and the abbey form background to this installation. 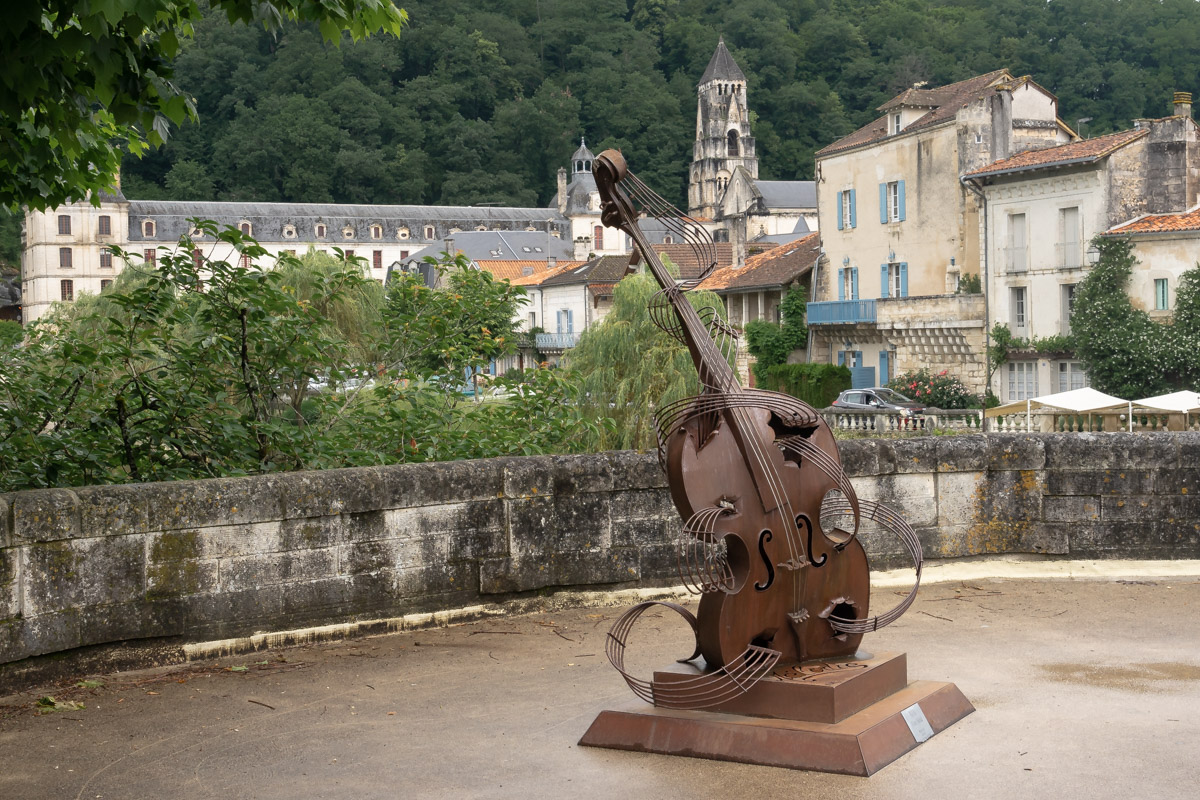 So, how is this distinctive village not a member of the Most Beautiful Villages in France association? It turns out that the wider commune numbers a few dozen residents above the maximum allowed threshold of 2,000; it just does not qualify. The heart of Brantôme does not feel any larger than that of Monpazier, but the former is actually four times as big in terms of population. The outward growth be damned!

Of course, the absence of a formal recognition does not make Brantôme any less prettier.