More stops on the French route of Santiago de Compostela

A year ago, on a day-trip from Costa Brava, I stopped by a couple of interesting churches in order to add Routes of Santiago de Compostela in France to my collection of visited World Heritage sites. One of the biggest serial sites on the list, this property includes 78 different locations in various parts of France, including three in Dordogne. Our itinerary allowed us to explore all three.

First, we stopped to check out the Abbey Church of Saint-Avit-Sénieur. 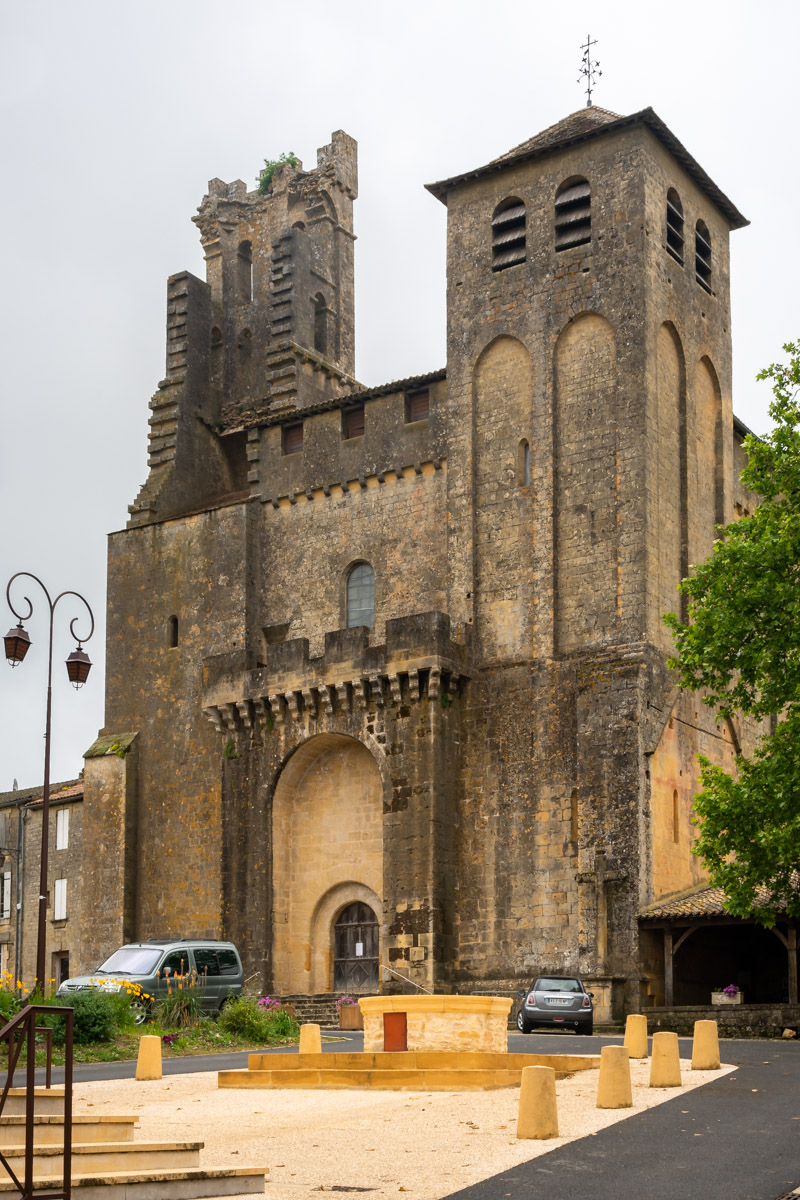 As I have foreseen last year in Rabastens, the subsequent churches in this series of sites would not favorably compare with the very first one that I had visited. Église St-Avit is comparatively bare on the inside and exhibits none of the abundant color that I so enjoyed at Notre-Dame-du-Bourg. Its historical significance aside, St-Avit is a typical French village church: sufficiently imposing and large, with one or two fine features, but sparsely decorated on balance. 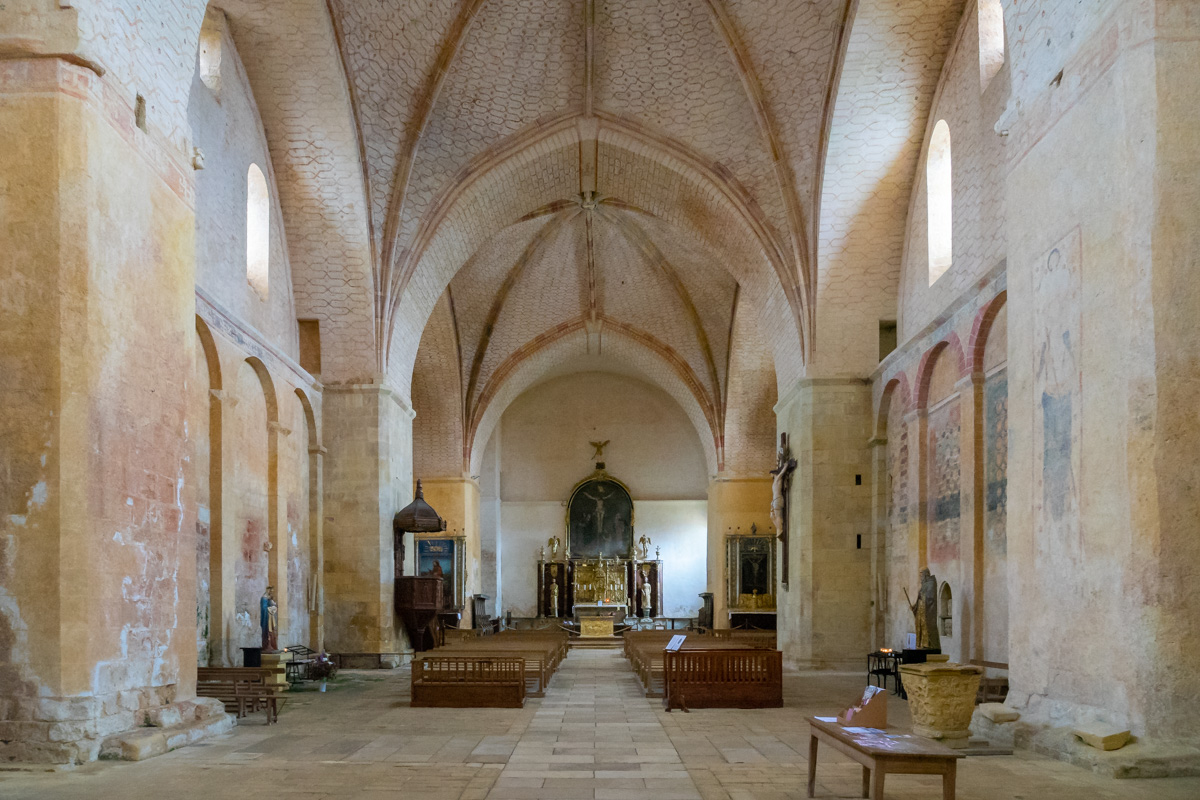 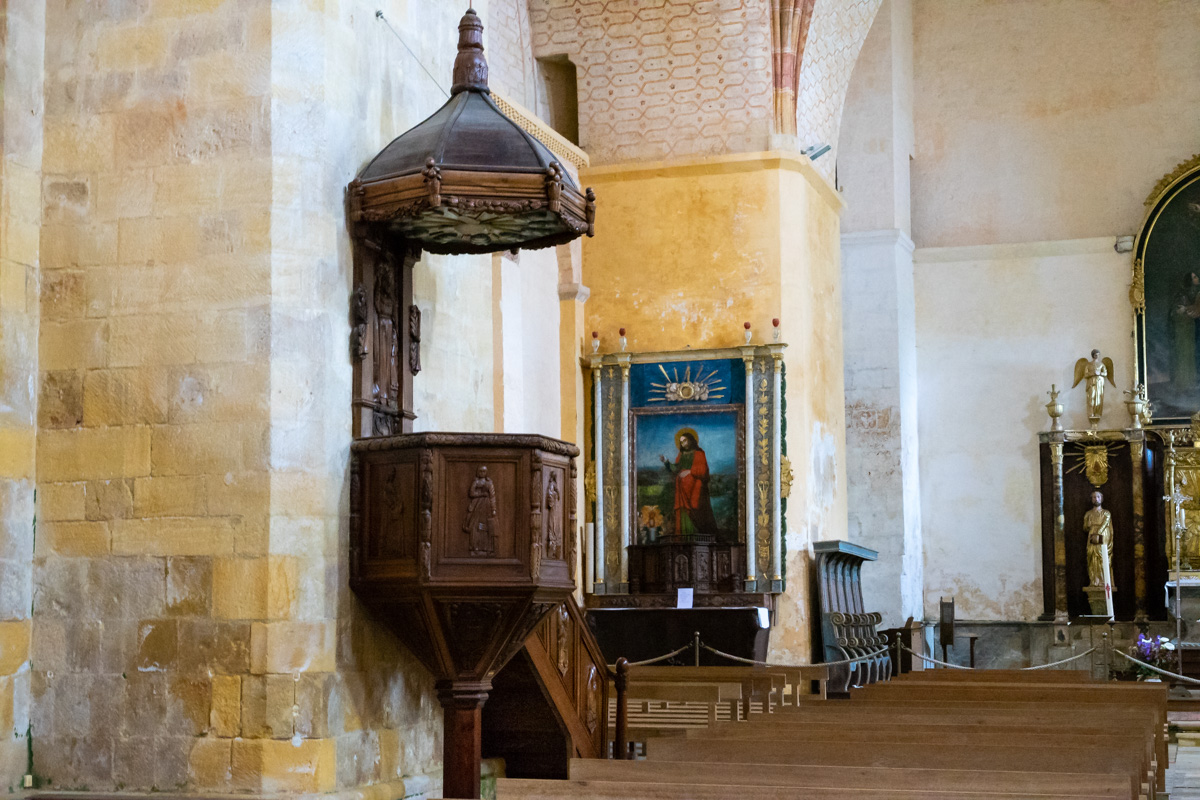 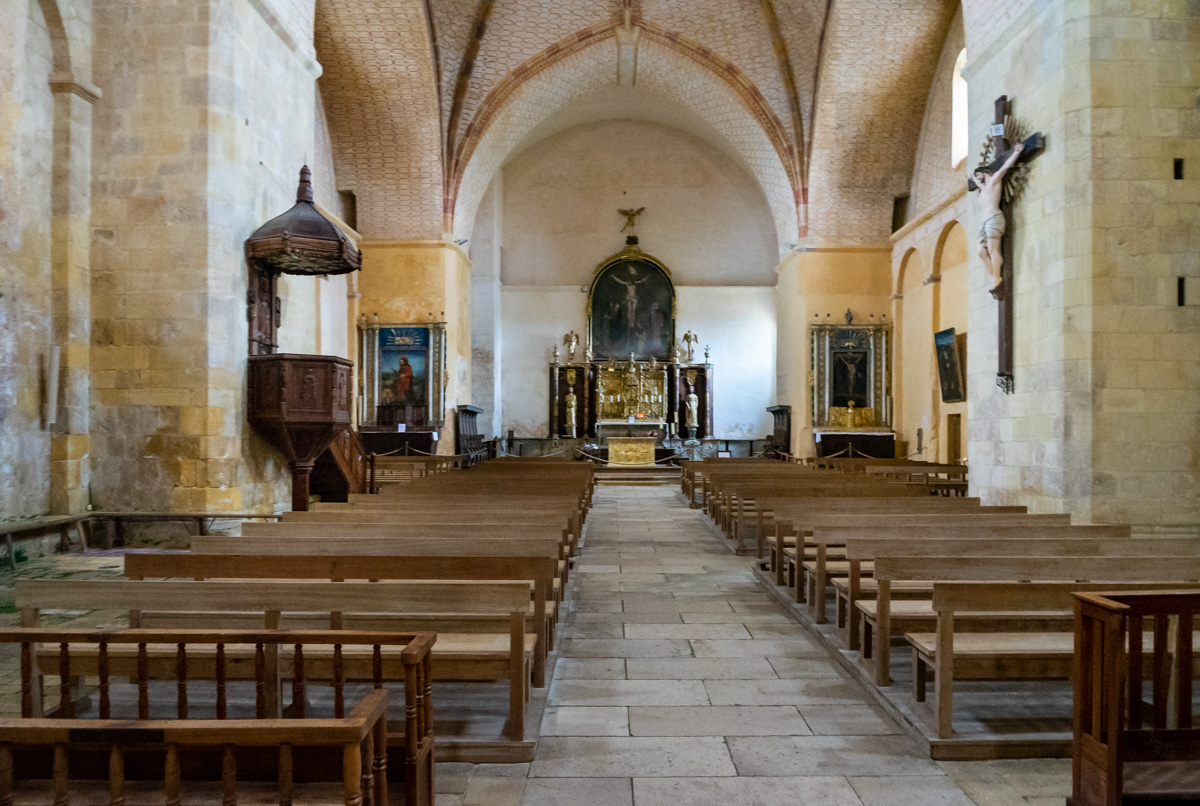 A few faded remains of frescoes and colorful patterns enliven parts of the walls. 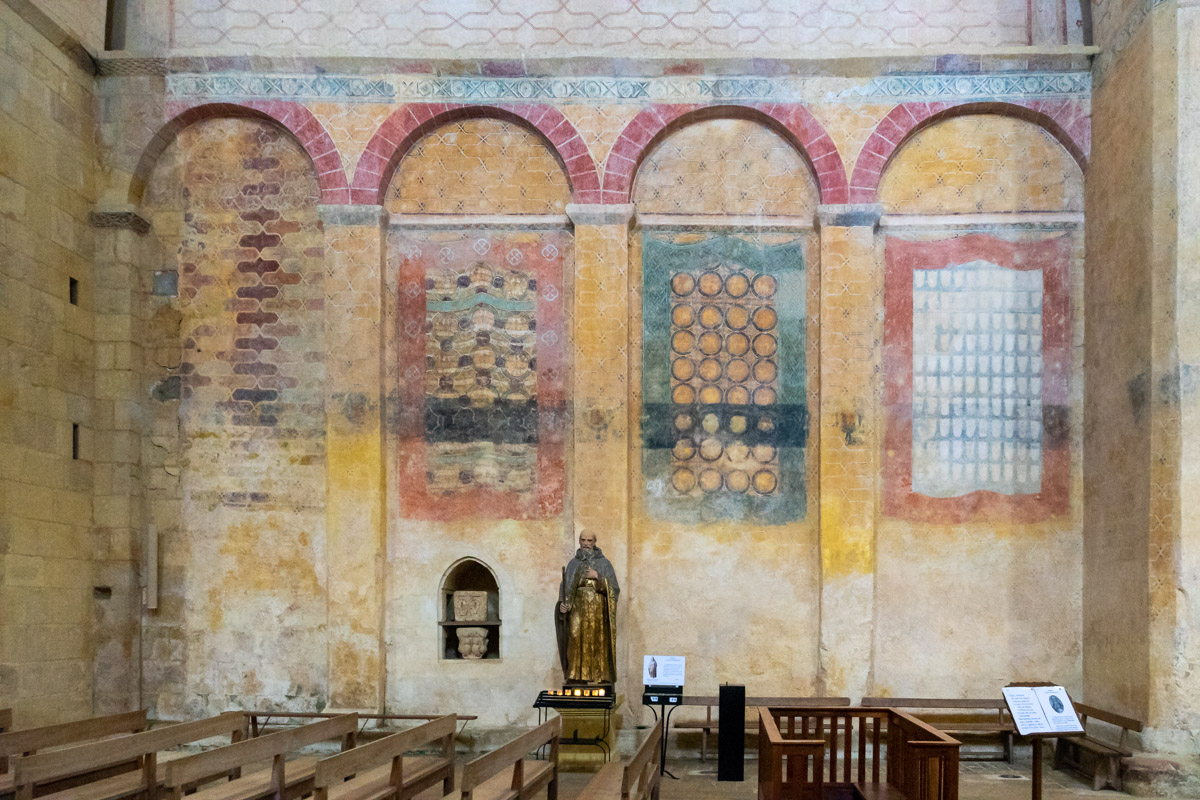 We did not linger in the village of Saint-Avit-Sénieur too much, but it appeared quite charming. Made me wonder why a similar commune such as Saint-Amand-de-Coly is on the list of the prettiest villages in France while St-Avit isn’t. 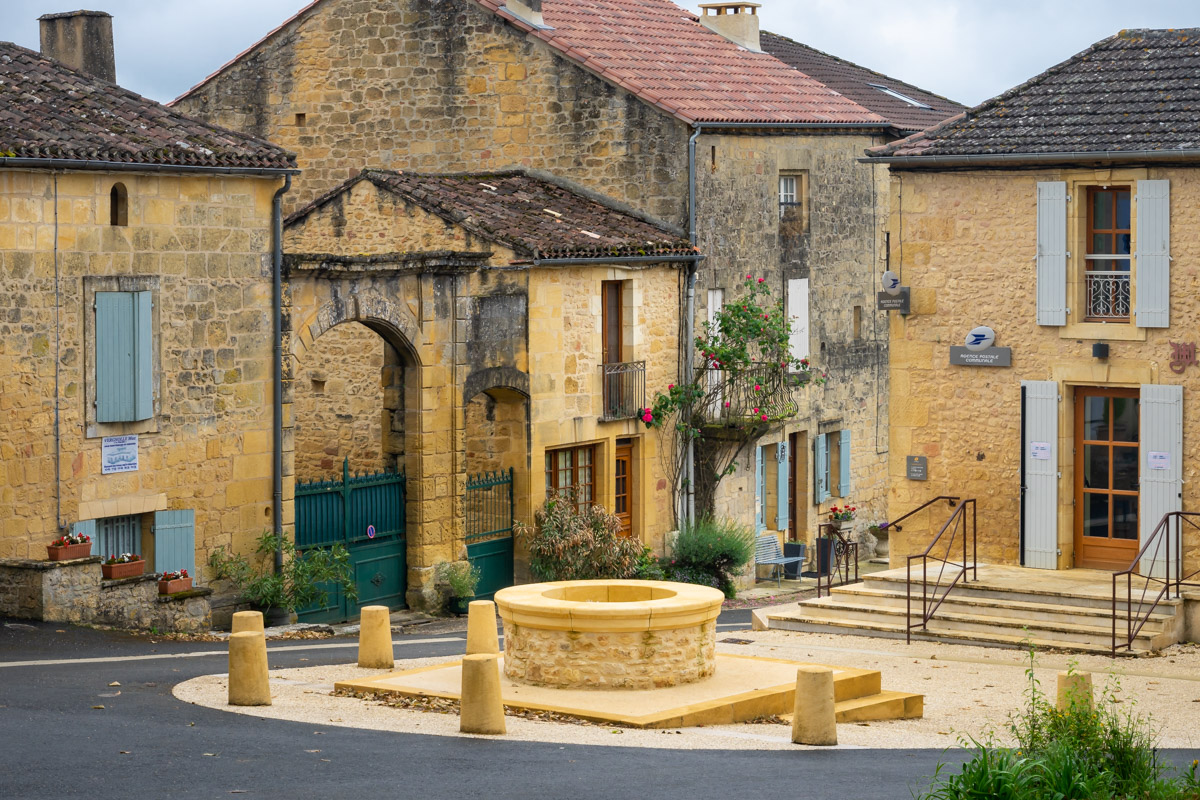 Our next stop was Cadouin and the abbey church of Notre-Dame de la Nativité. 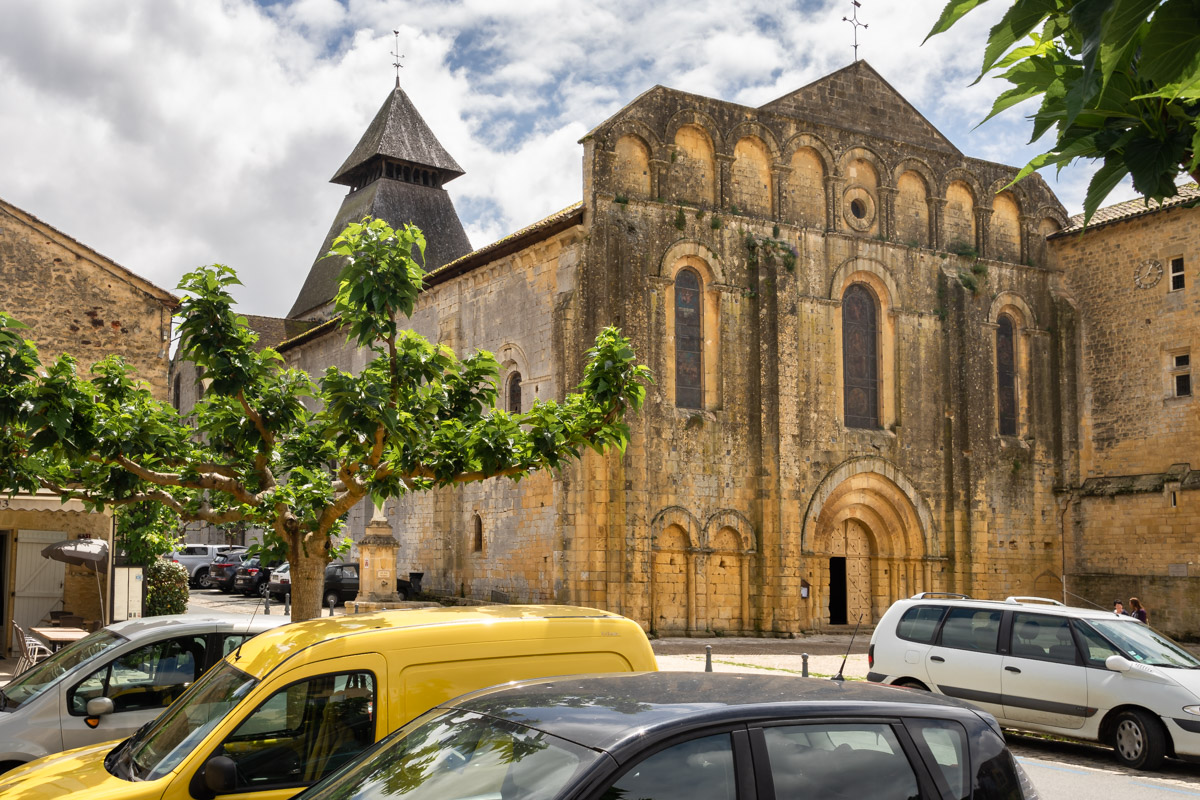 Again, massive, bright, and sparsely decorated, but not without some fine features and barely remaining frescoes. 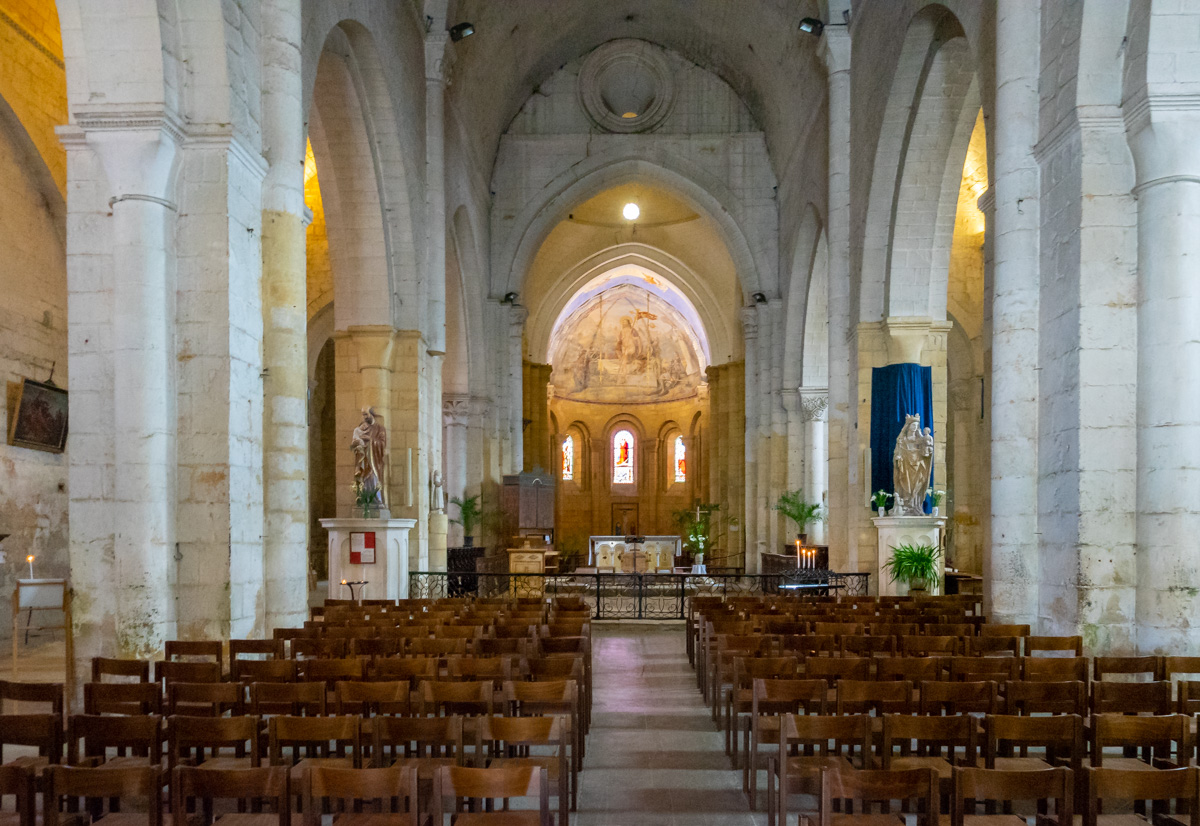 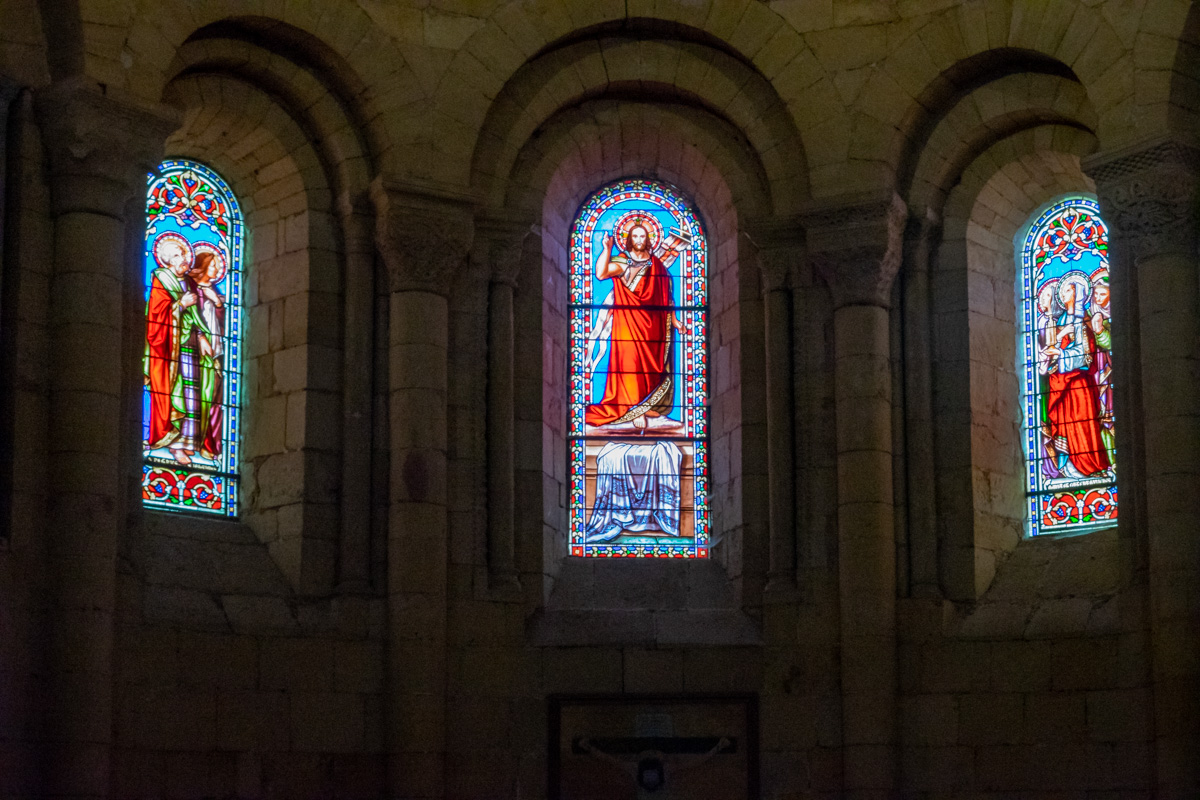 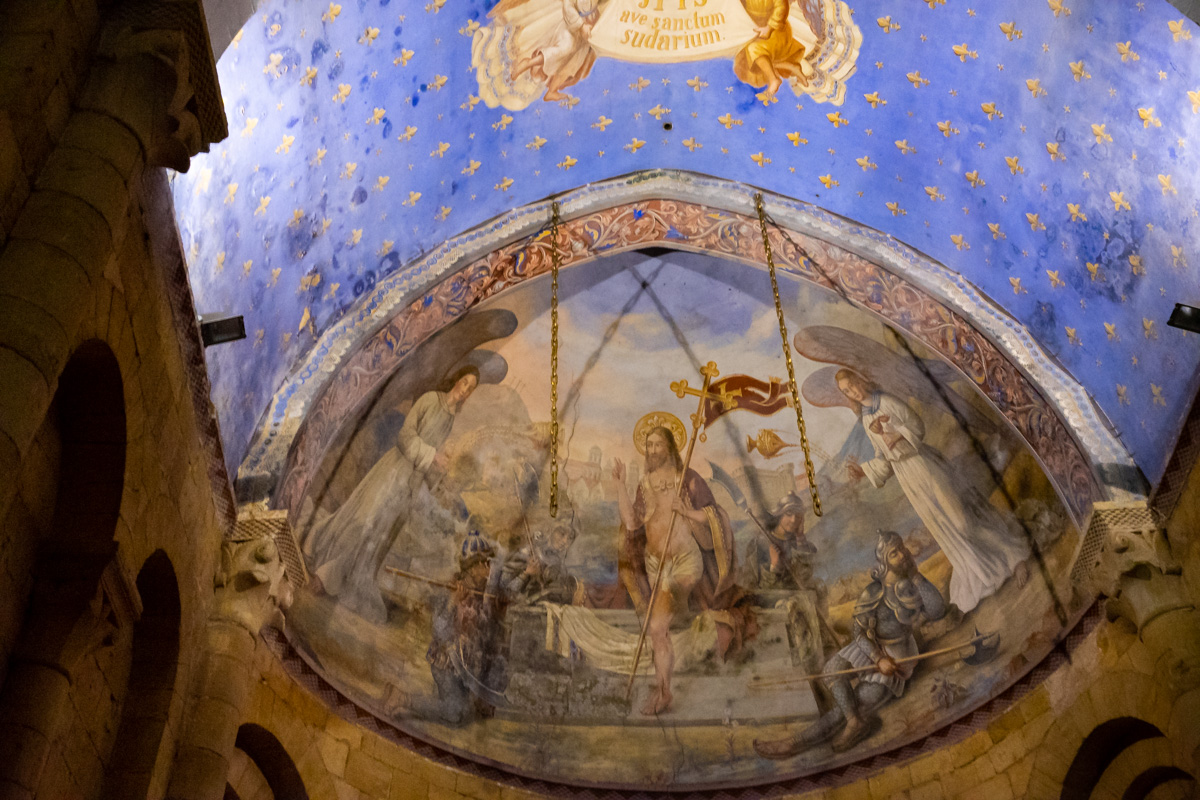 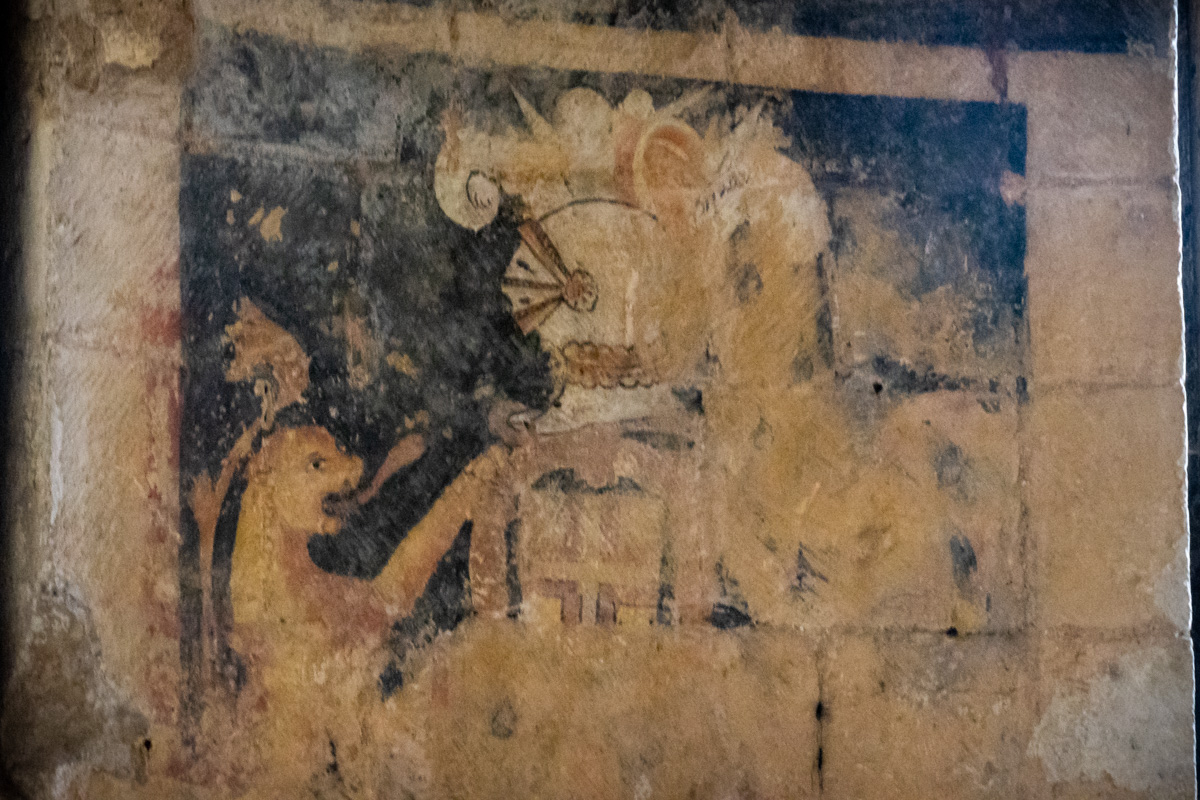 The cloister, though, is what makes a visit here totally worthwhile. Among the delightful details here are animal-featured gargoyles, intricate decorative patterns, and more fresco remnants. 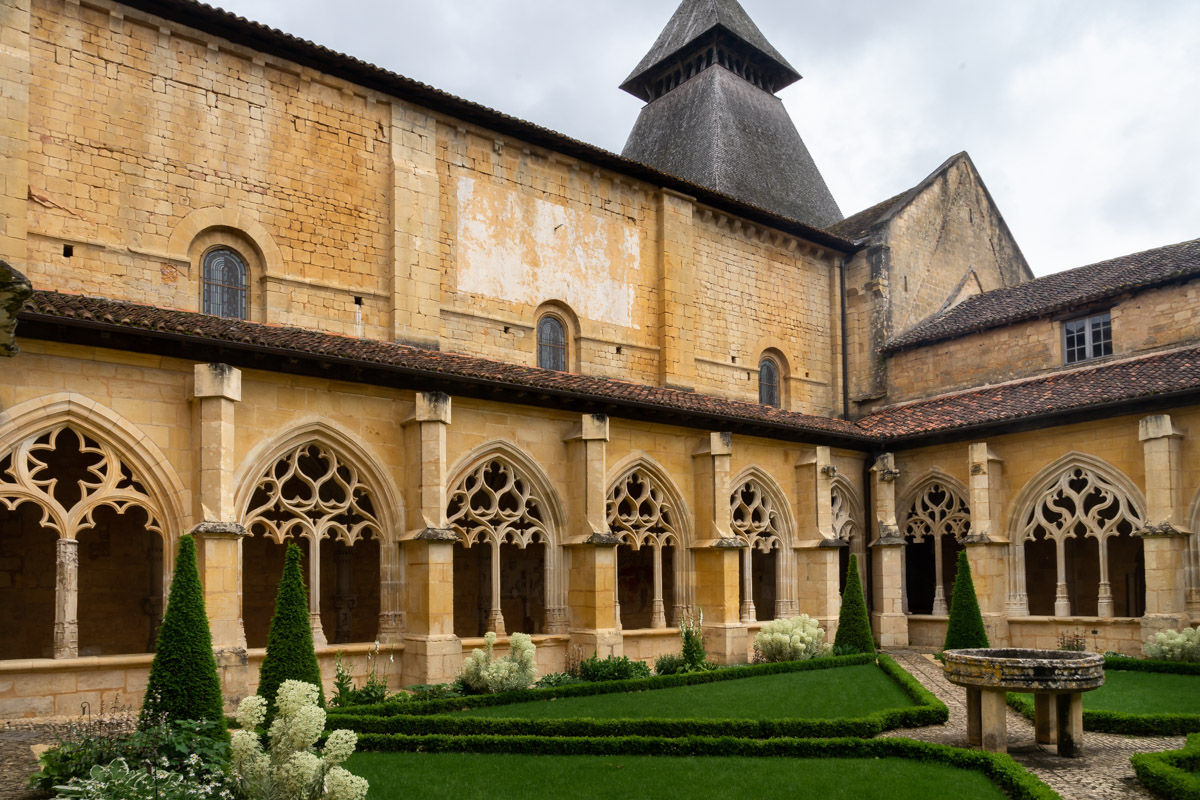 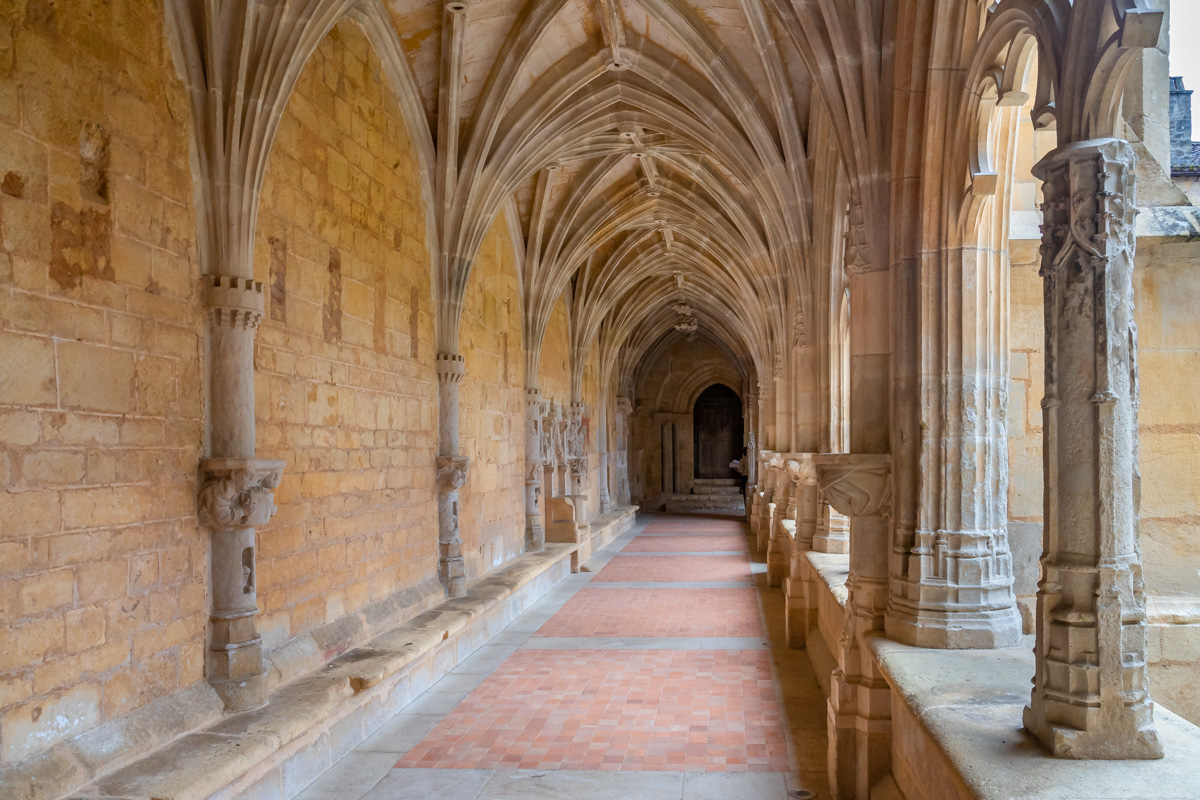 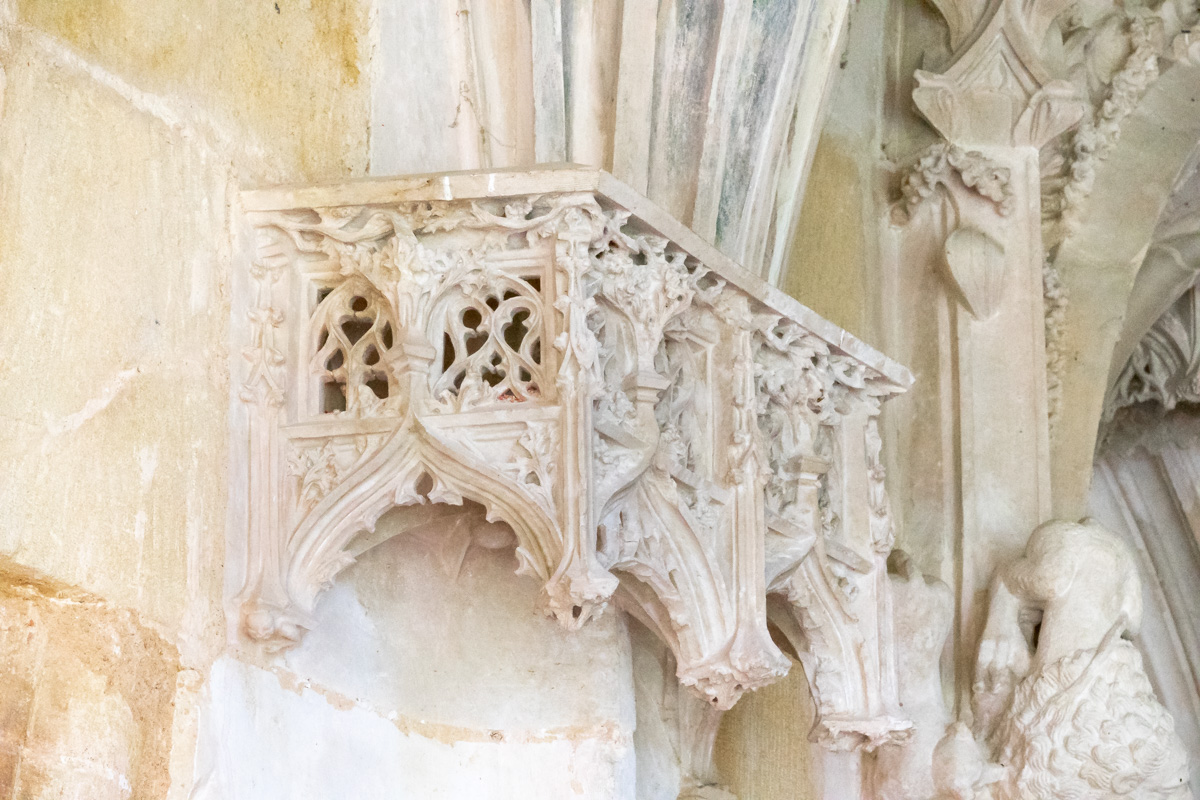 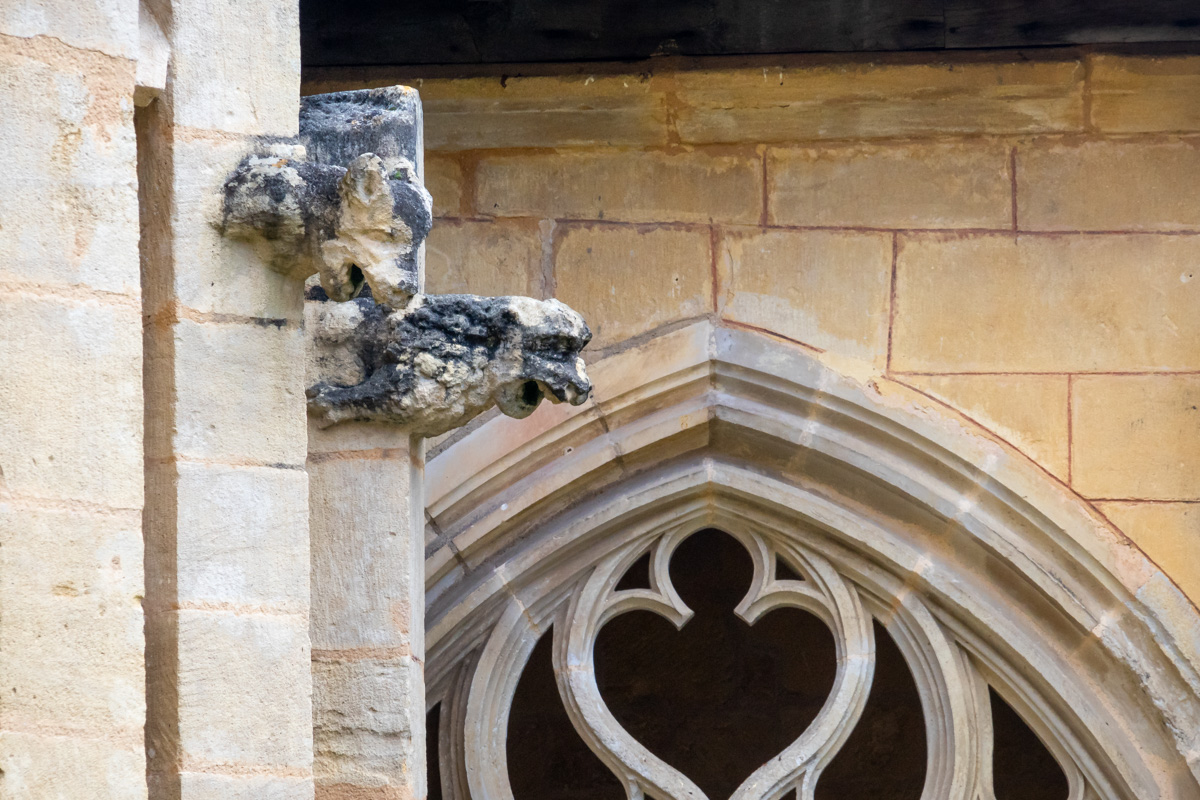 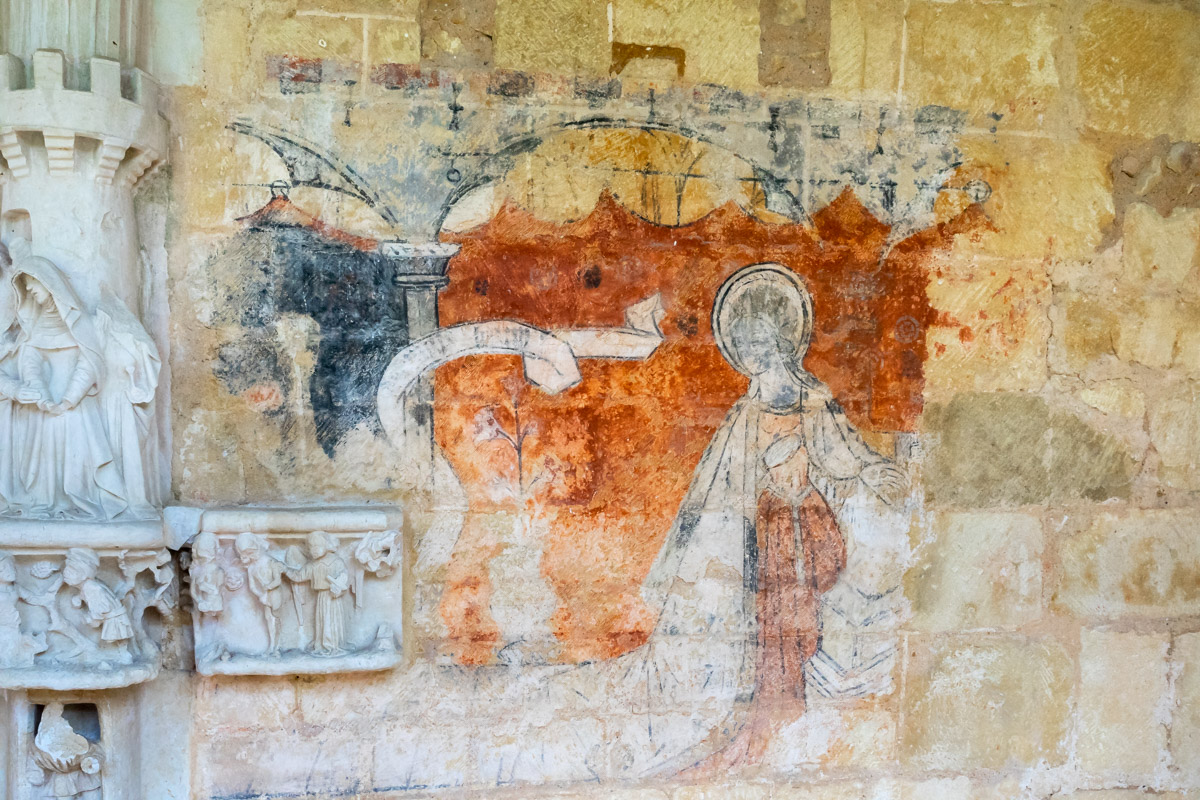 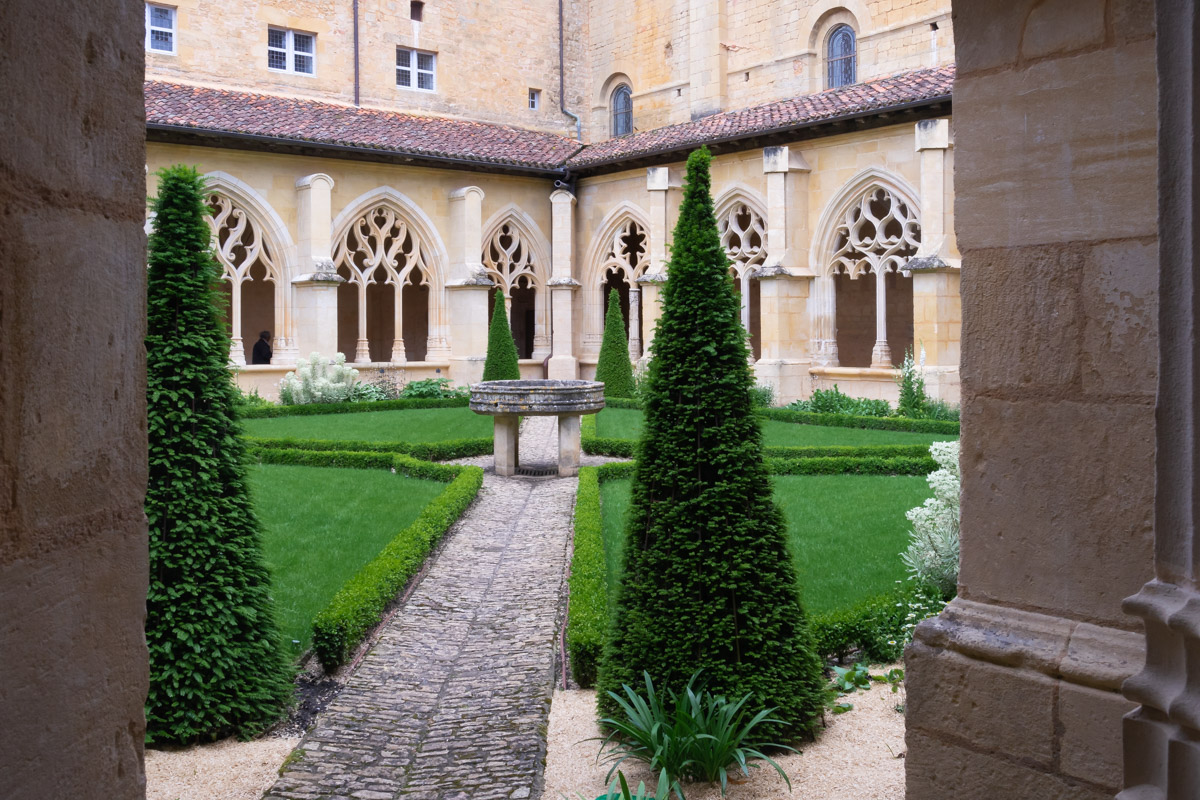 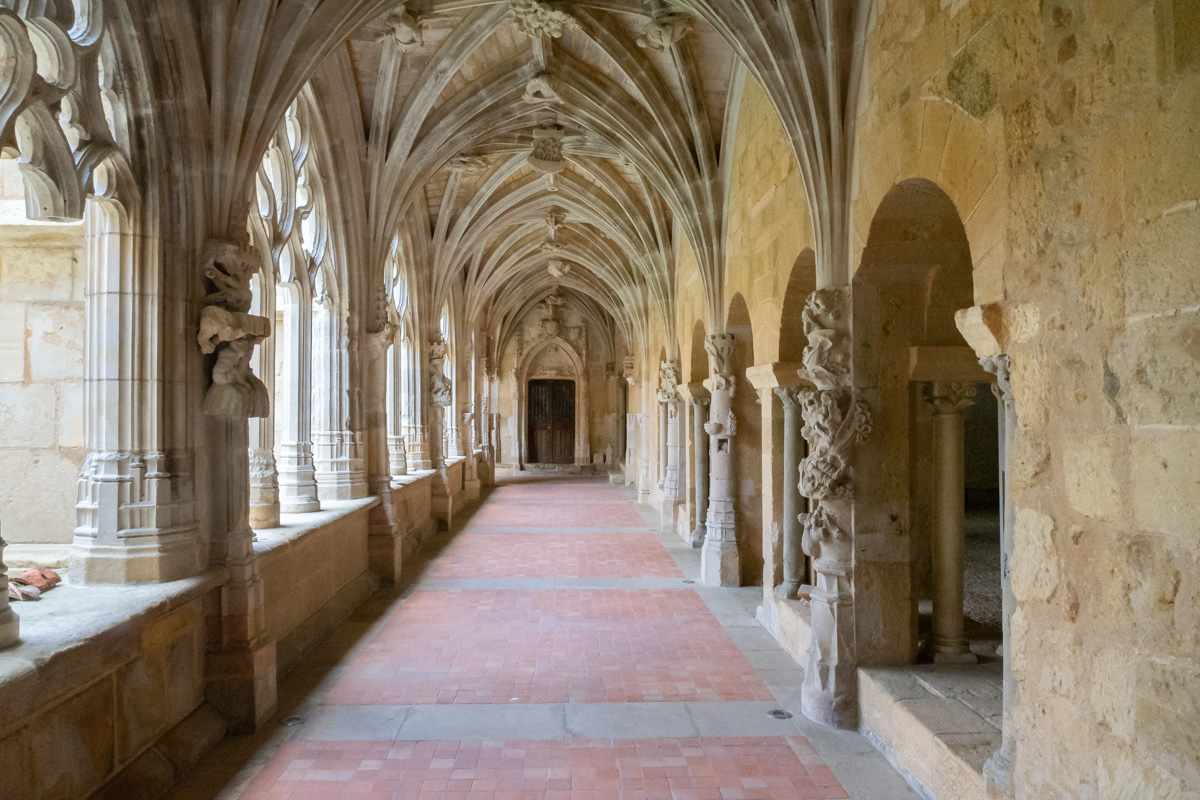 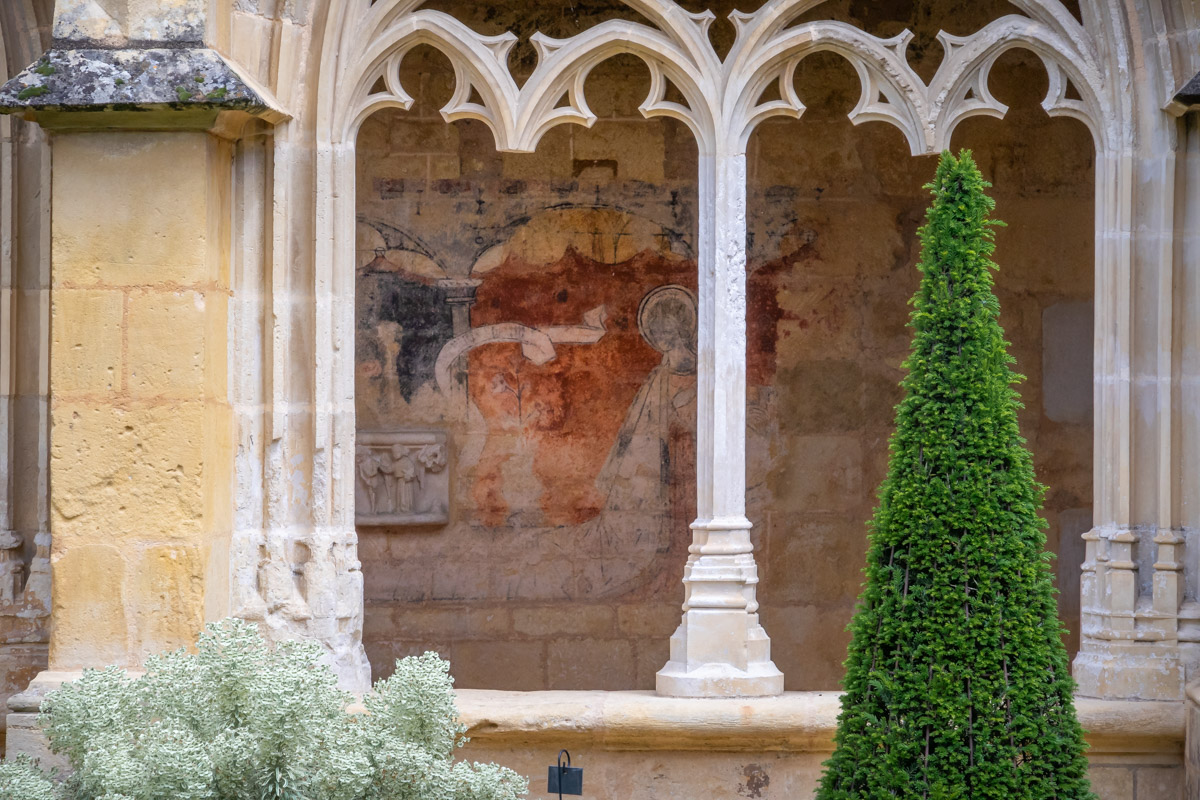 Cadouin is a bigger village with a relatively lively central part adjoining the abbey. We took a brief look around. 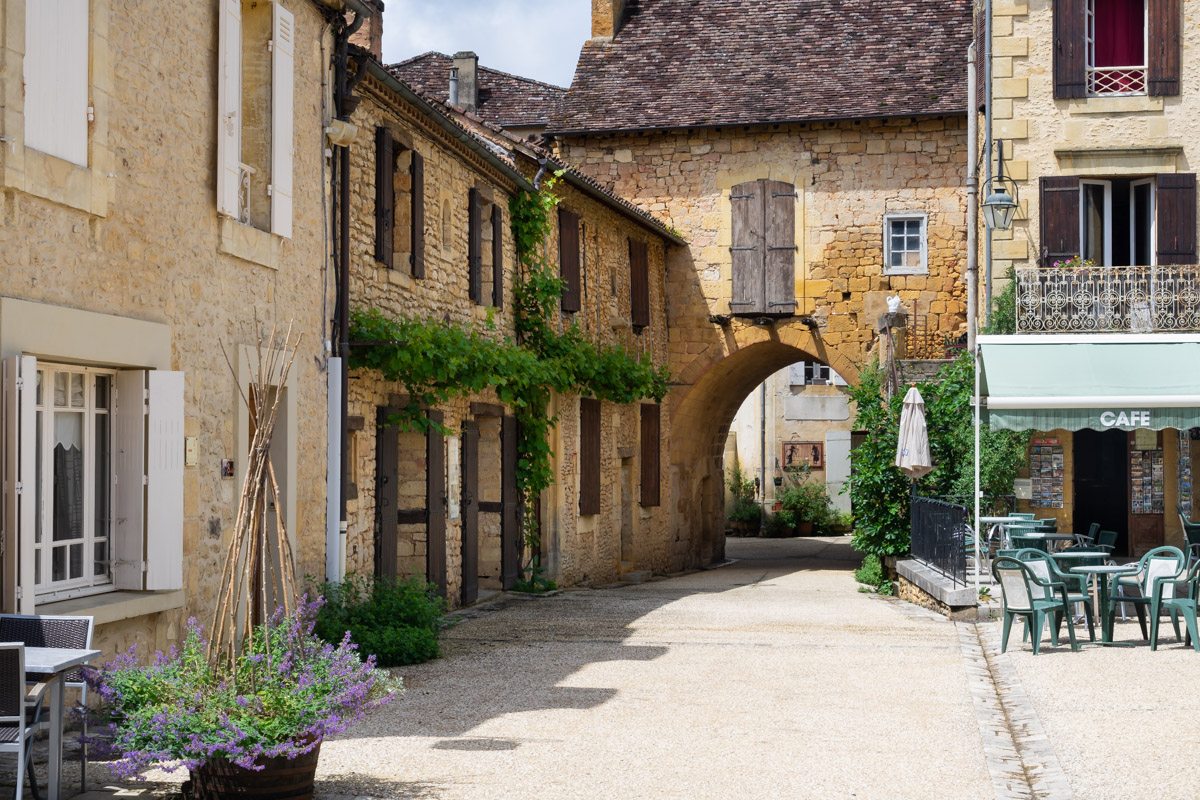 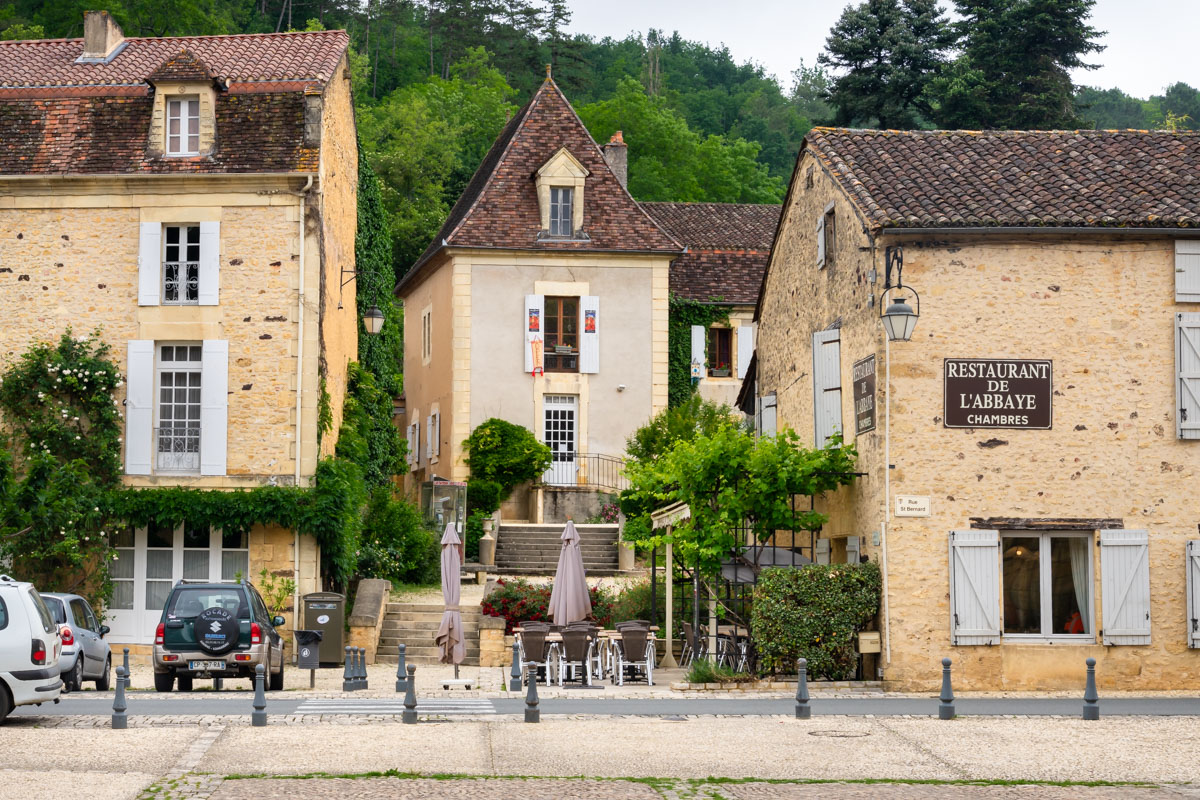 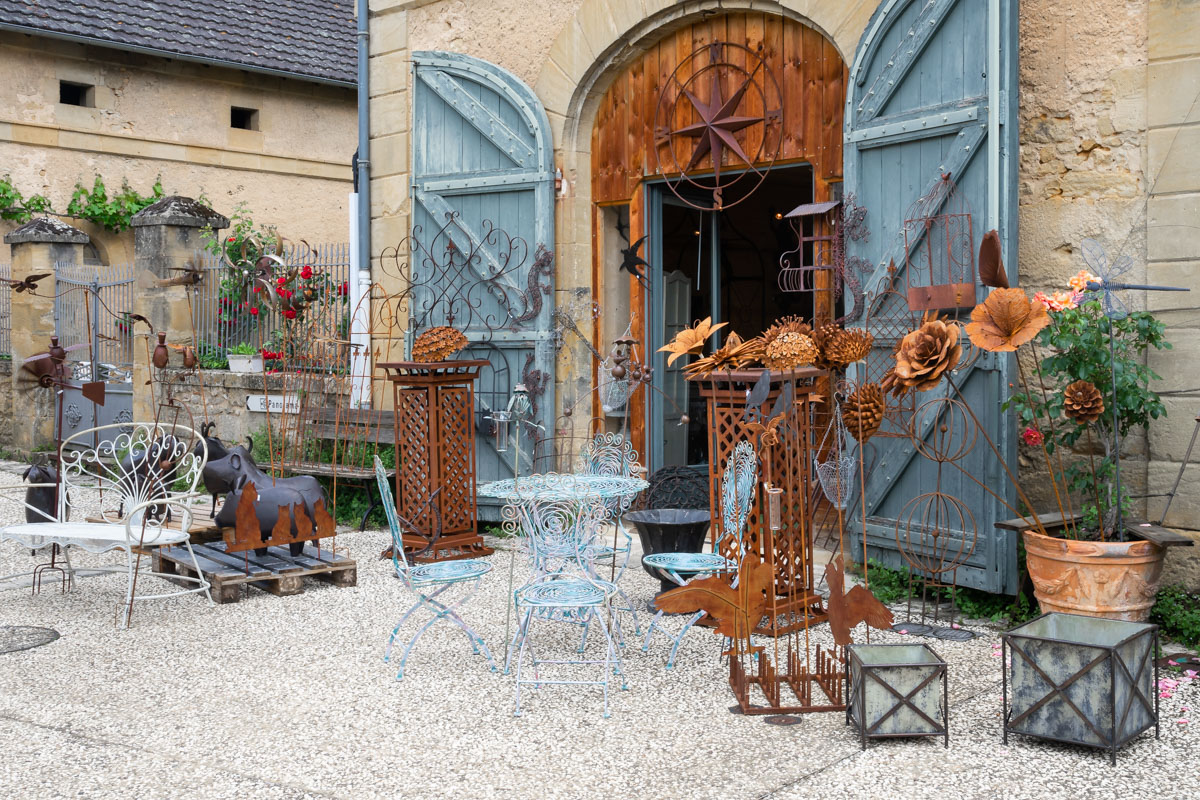 The third stop on this list was the St-Front Cathedral in Périgueux. It is one of those churches that definitely makes an impression as you approach it. 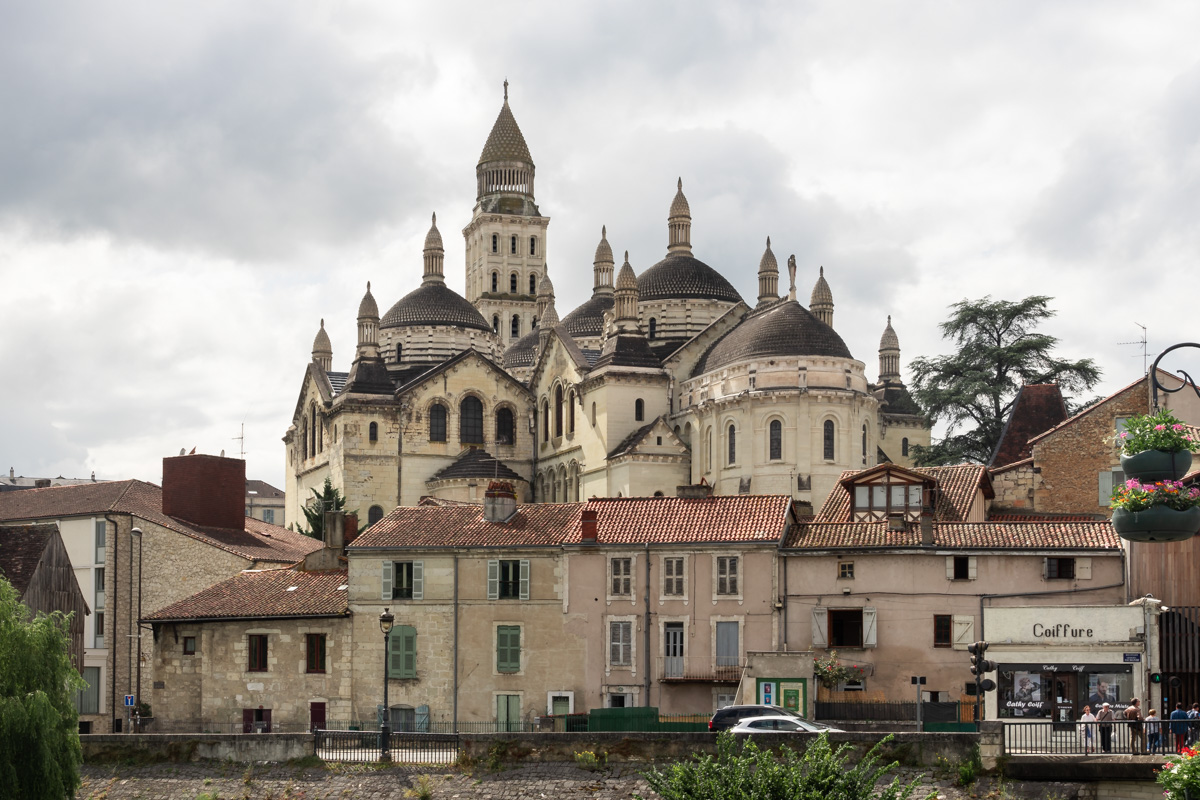 The interior, however, is mostly pretty bare. 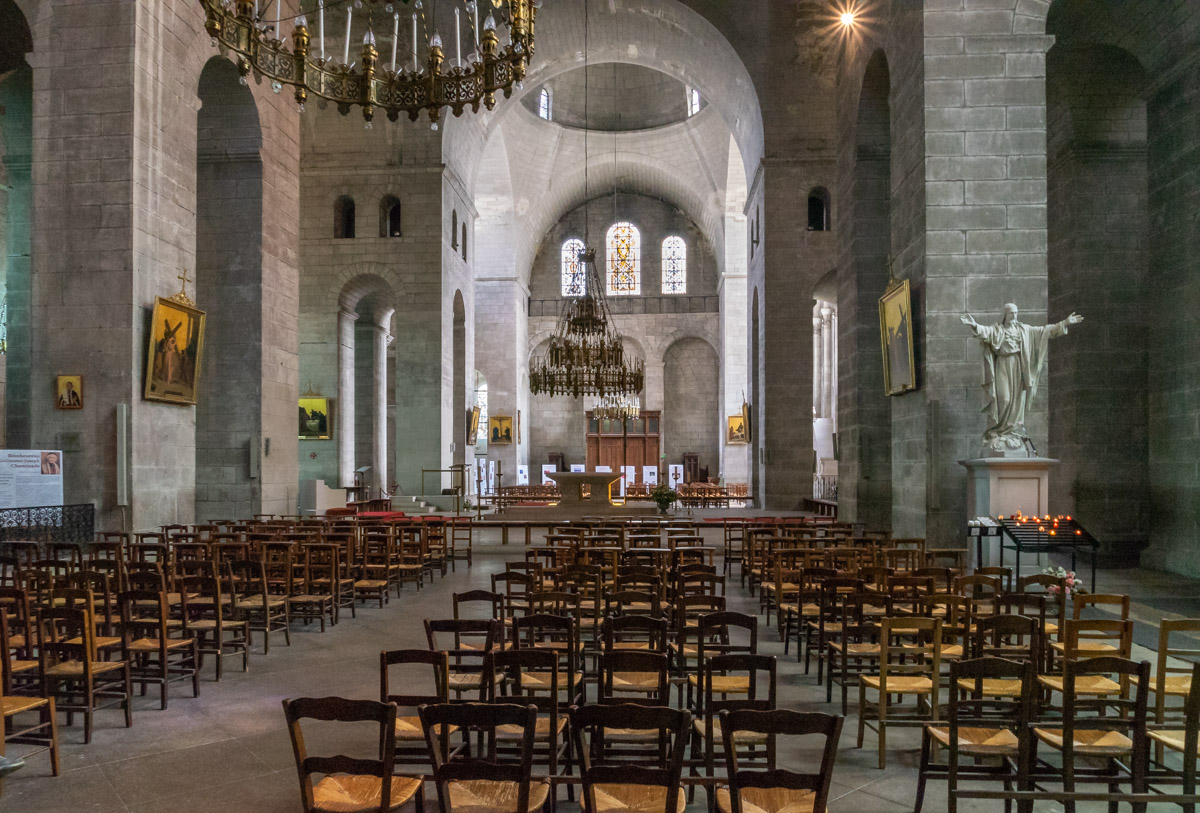 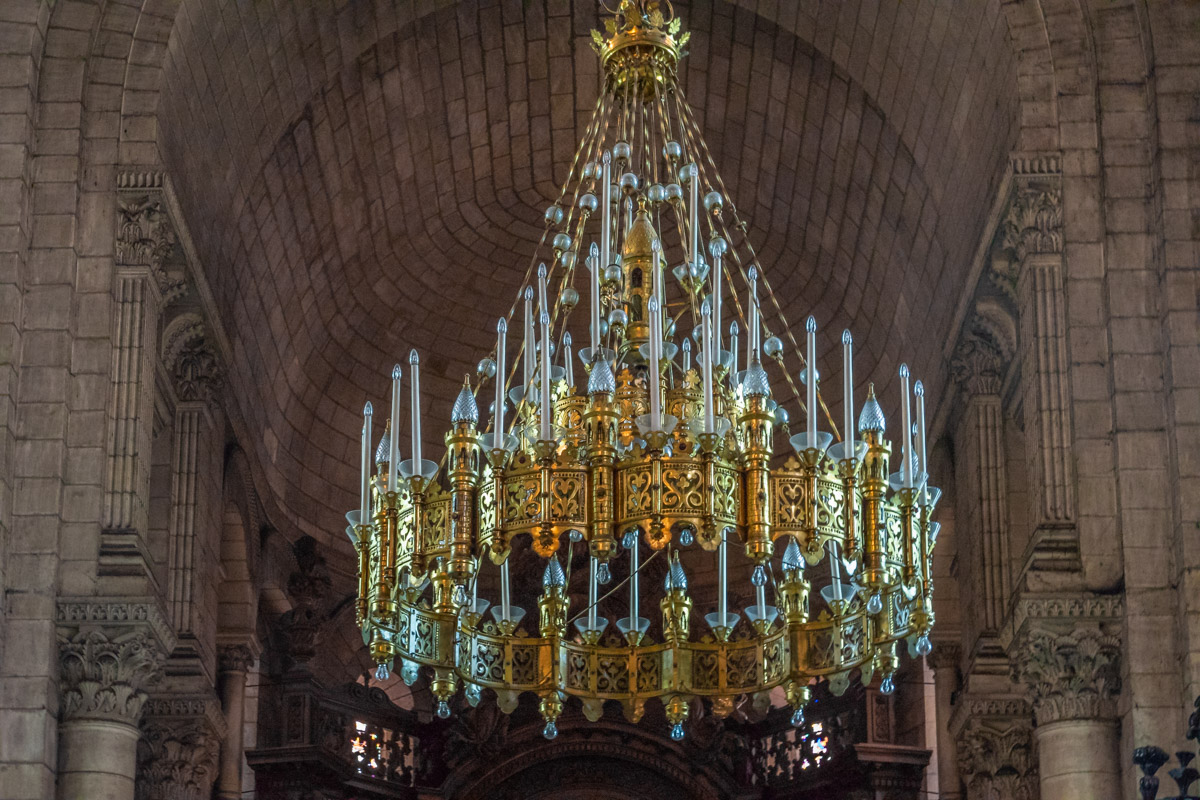 The massive wood altar is not well lighted in the off-service hours, but it is definitely among the most impressive features of the interior. 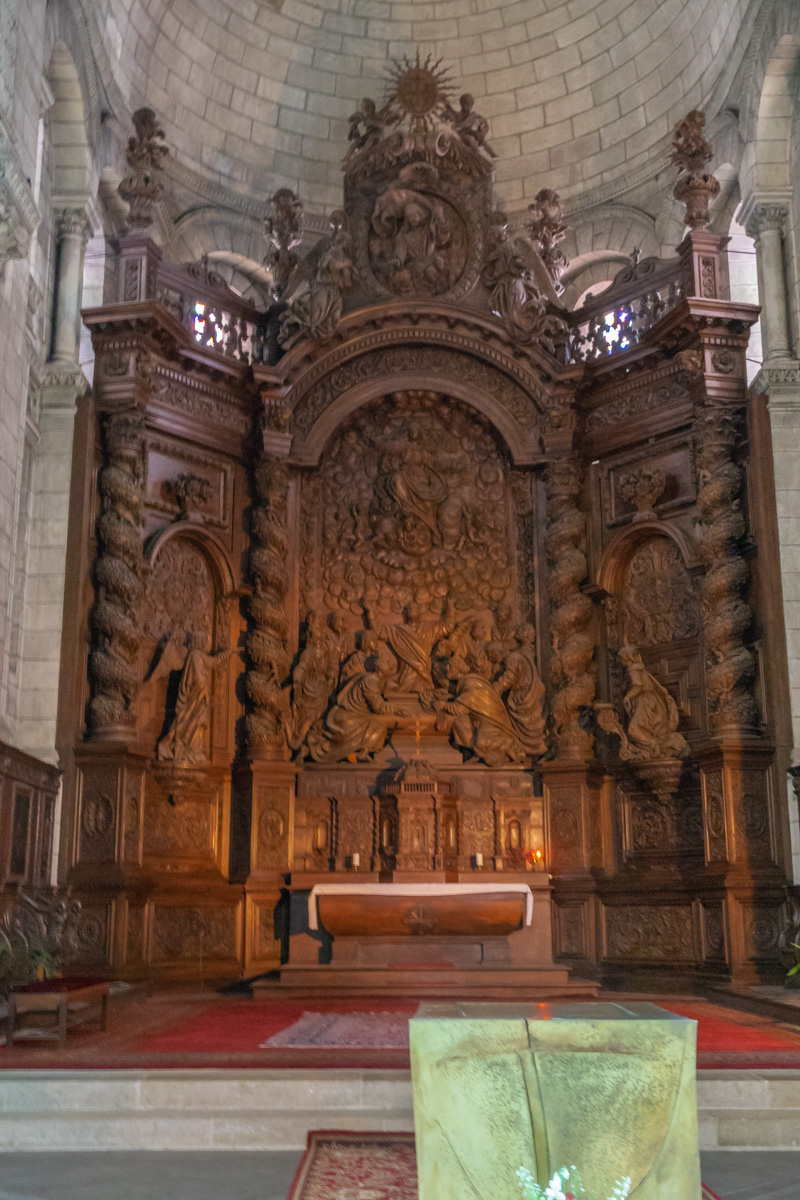 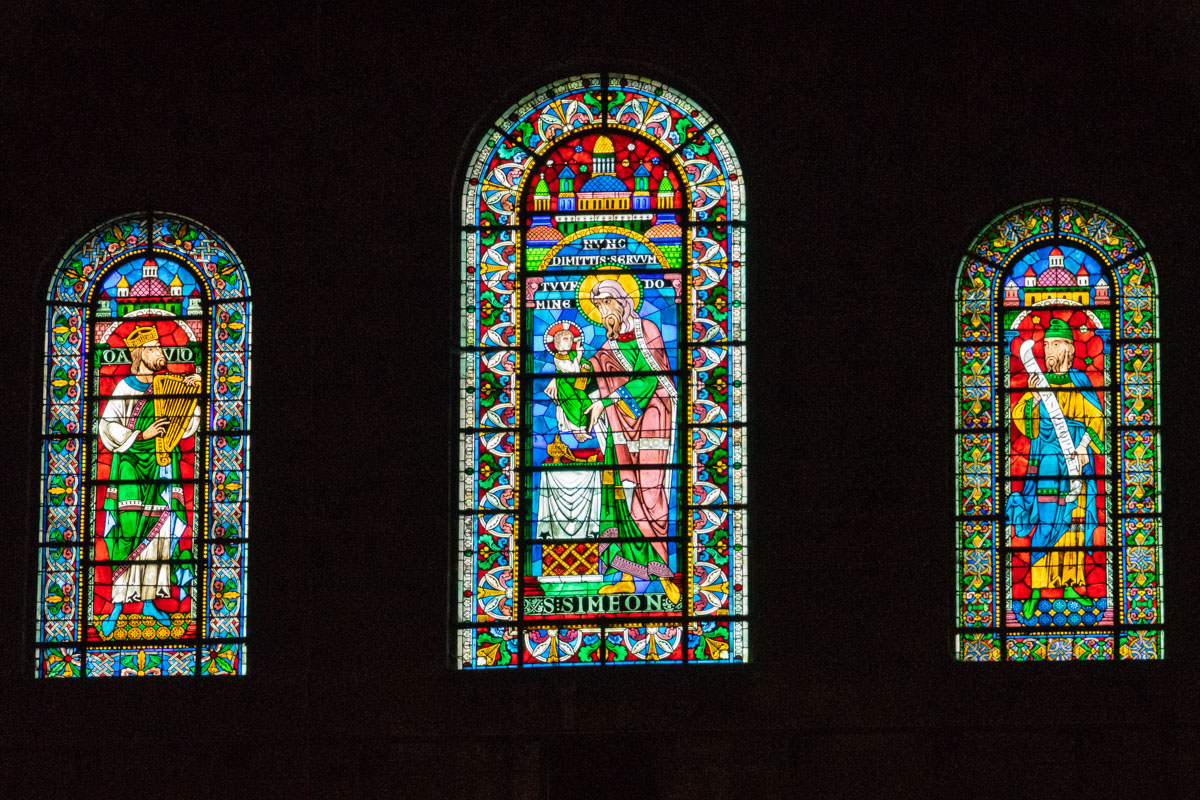 The architectural ensemble of St-Front is certainly worth another look. 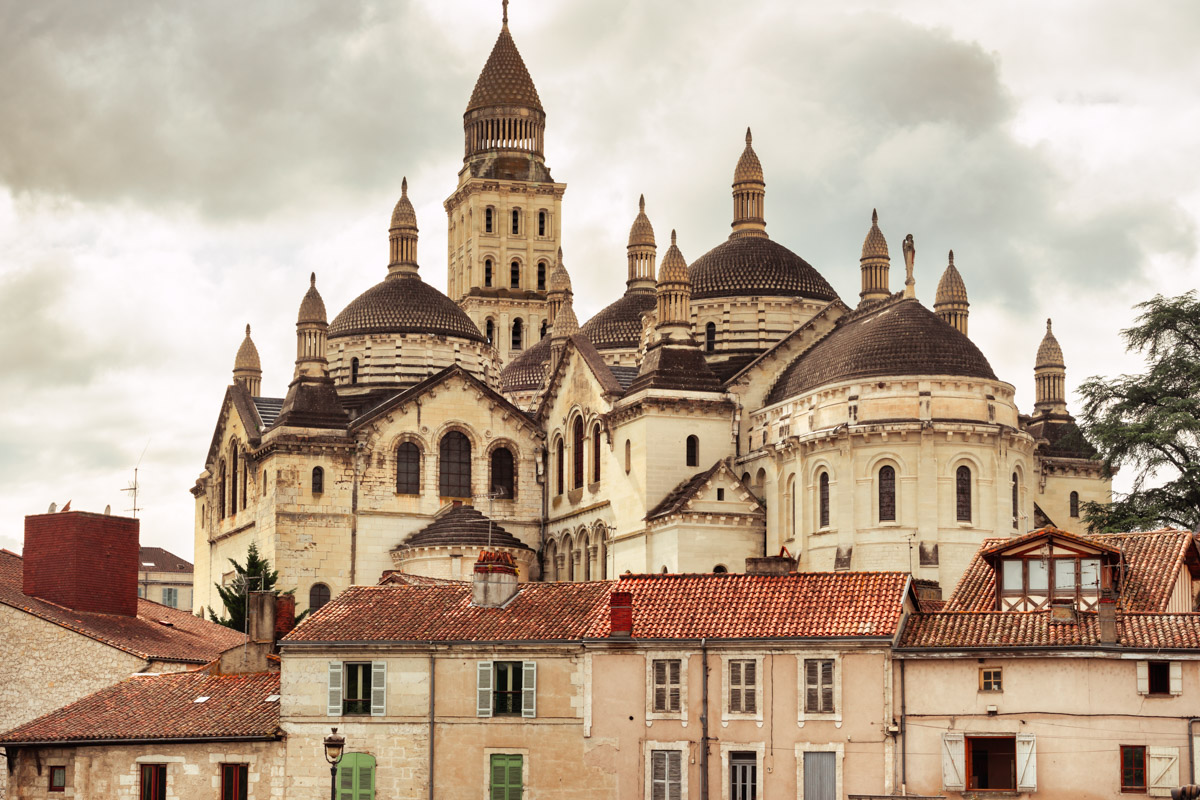 The town of Périgueux is a destination in itself and we will take a few more glances at it in the next post.

Later on the trip, when we were spending a couple of days in Paris, we walked by the Tower of Saint-Jacques that is also one of the points on the Route of Compostela. It is possible to go up the tower for views of the city, but it requires a bit more time investment than we were willing to expend. This was not the first time that we saw the tower, but it was the first time I purposefully photographed it as part of my World Heritage chase. 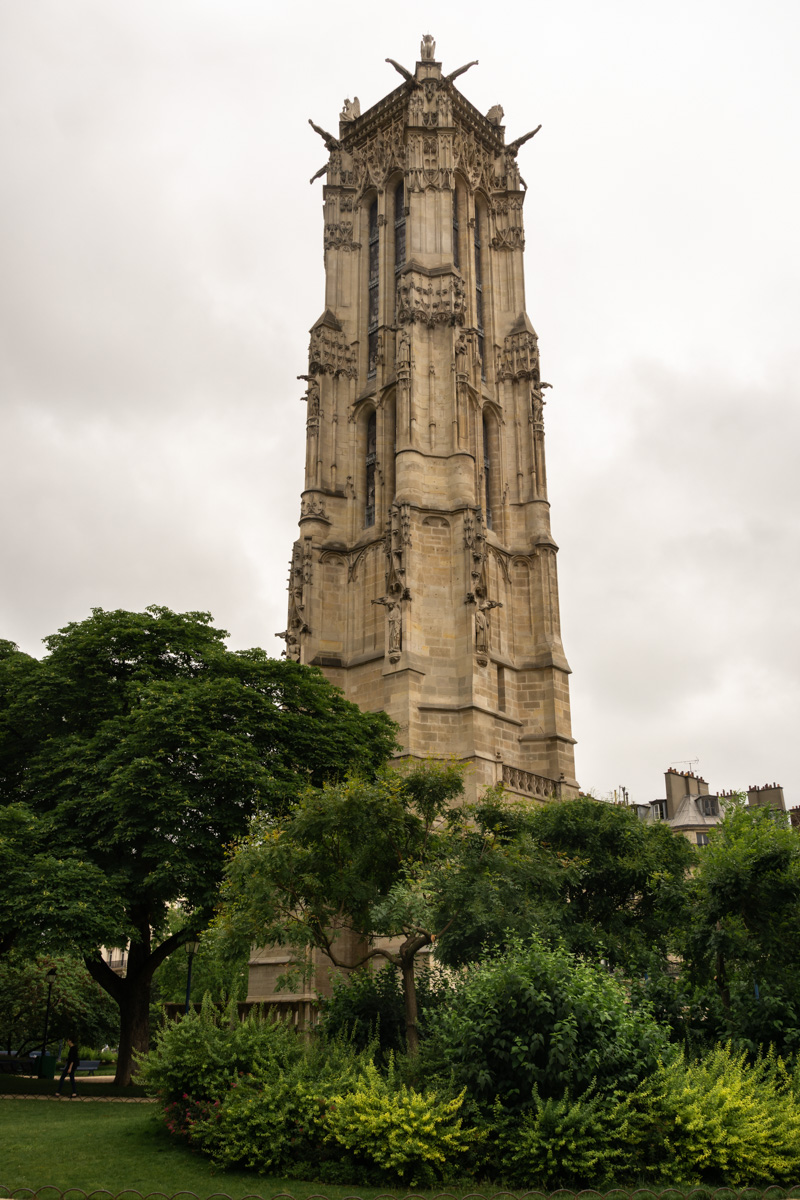 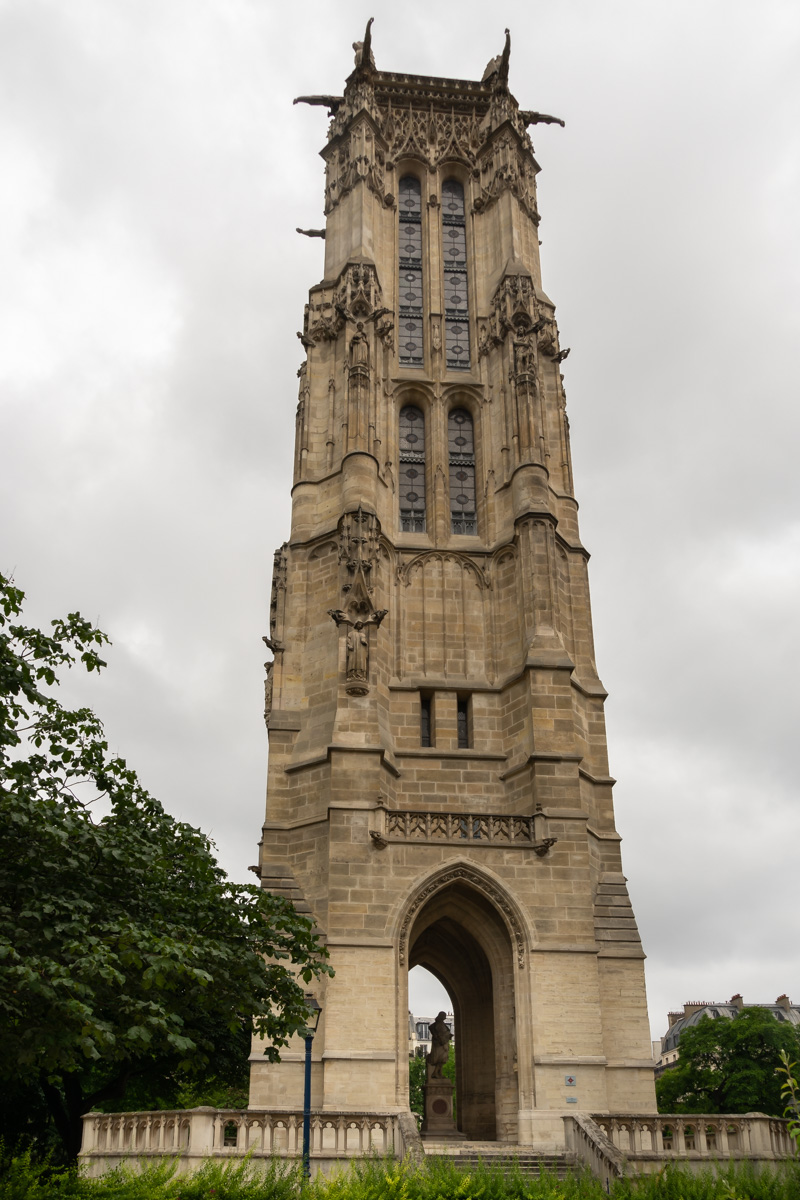 For most of the big serial World Heritage sites, I have them on the visited list with only one location having been explored. For this entry on the list, I have now been to 6 locations. Not bad!