Just as I did three years ago, I will start retrospective of the recent Scottish trip with the brief run-through of visited distilleries.

We stopped by 15 distilleries over the course of 6 days, in Highlands, in Lowlands, and on Islay. Only one was a repeat visit to a distillery we have been to in the past. The nature of the visits ranged from full-blown tours to leisurely tastings to comparatively quick stops for a wee dram or three. The grades below represent my evaluation of the experience at each distillery, with an obvious asterisk to denote that the variation in limits of those experiences makes any comparison inexact.

Glengoyne – our first stop was the aforementioned repeat visit. In fact, I have now been to Glengoyne on all three whisky trips to Scotland, so it clearly holds the title of my favorite. There are tutored tastings on offer, but there is always an opportunity to get a few drams in an informal way at the shop counter for free. The staff is always engaging – so engage back, and you may get offered a good half a dozen ages and brands to try. The shop has a number of rare and very old whiskies on display. A. 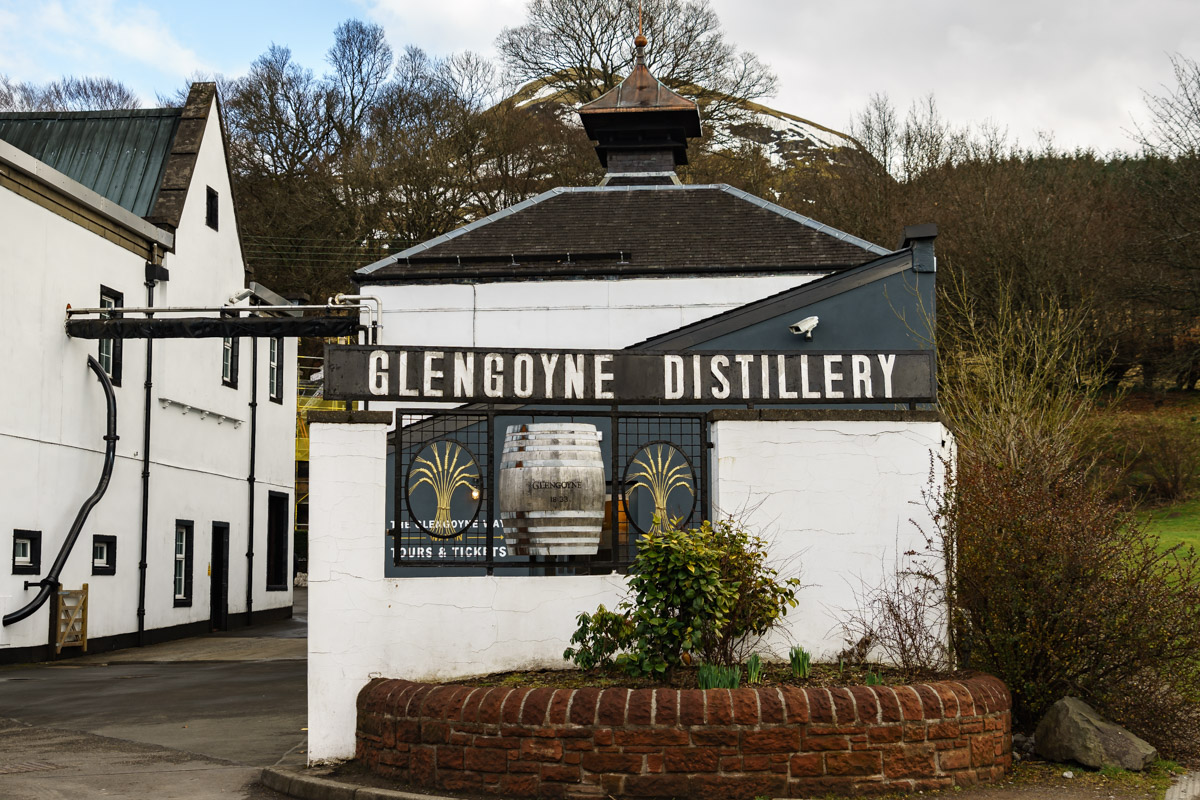 Oban – nice shop and a reasonable tour led by a personable guide. Two drams are included with the tour – one at the counter, and another “to go” inside the souvenir box. Since Oban is part of the “Friends of the Malts” network of distilleries, the tour – and, therefore, the drams – were complimentary. B+. 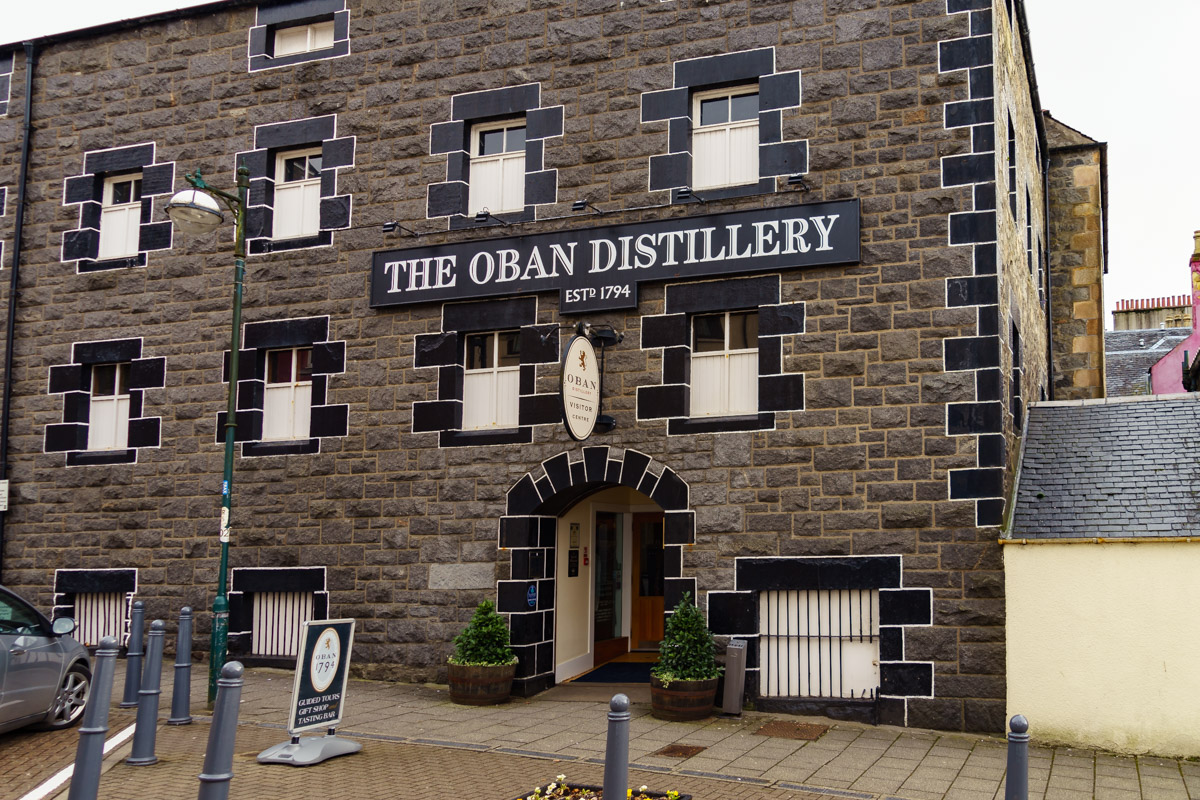 Laphroaig – one of the better-known Islay distilleries. Good shop with an adjoining lounge for tutored tastings. We paid for a tour here, which could have been better if the guide was not so focused on executing her script; but the educational component of making peaty whiskies was very good. At the end of the tour, each of us could exchange 3 “tokens” for one, two, or three drams to taste, depending on the “cost” of the particular whisky. We each went for a 1-token plus a 2-token dram combo. B+.

Ardbeg – the shop here looks more spacious with less on display, sharing a large high-ceilinged hall with a café. You can buy individual drams at the table, or order the “Express tasting” set that includes 5 drams. We went for the latter, which was probably an overkill. The service started fairly slow, but once we got served – and had all of whiskies in the set explained to us – it turned into a good leisurely experience. B+. 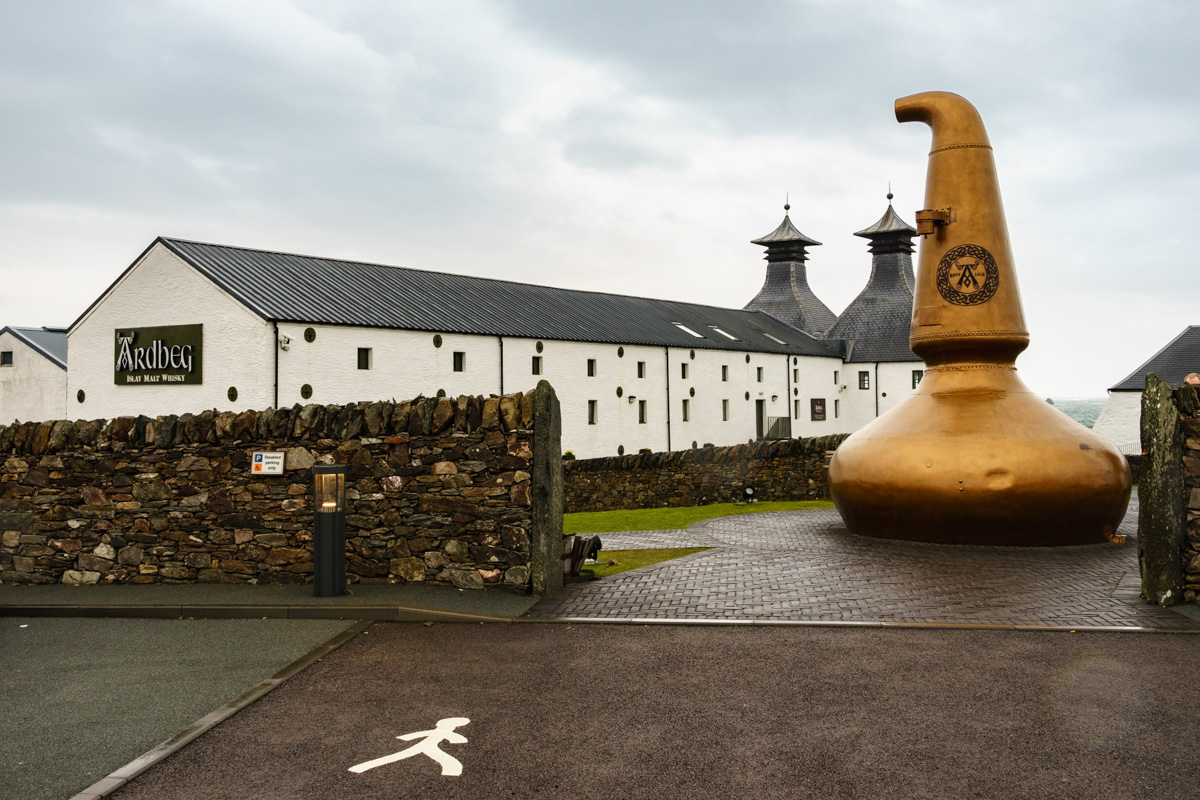 Bowmore – at the most centrally-located of all Islay distilleries, you park yourselves in the bright and airy lounge above the shop, and partake in a complimentary dram of the most common age. Then, if you choose, you can buy a tasting tray of other ages and brands; there are pre-set trays or you can select individually. The engaging staff member attending to us talked us into selecting nearly most expensive options, but it was a good price to pay for an excellent tasting experience. Among our choices was one of my top five “new” whiskies – Bowmore Vault Edition. A. 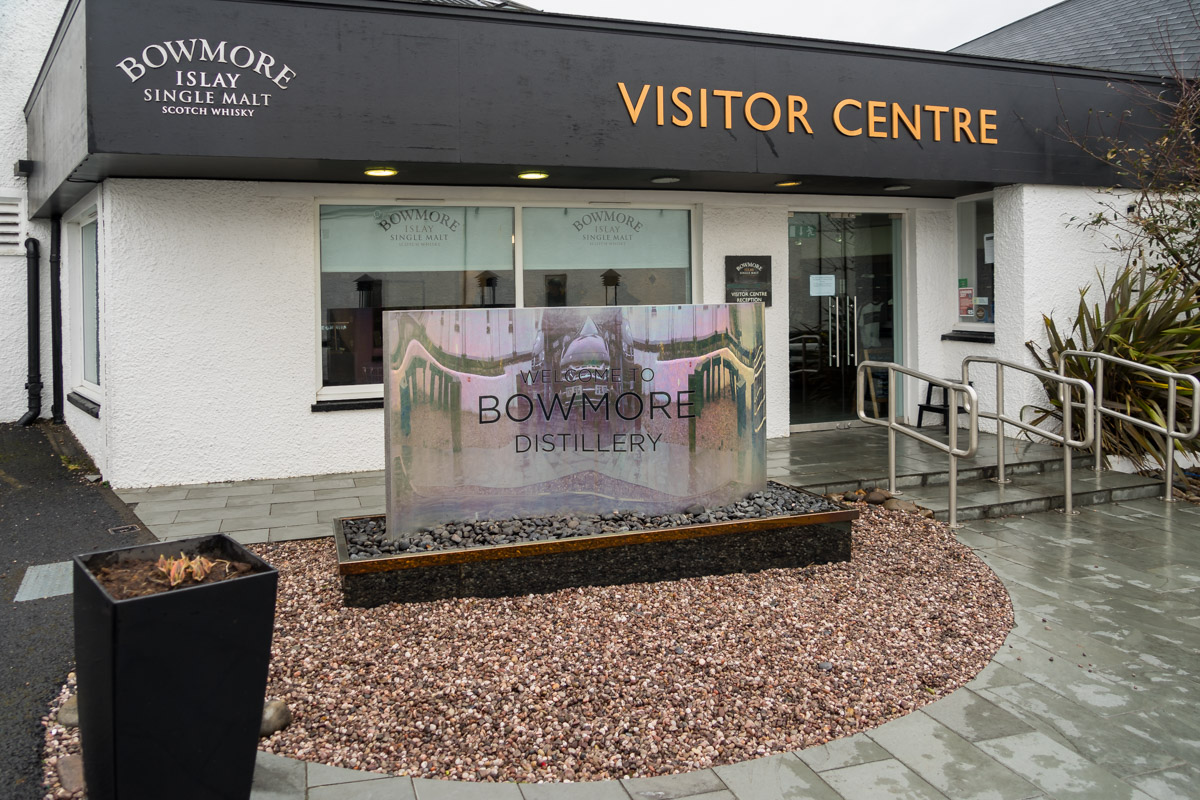 Bruichladdich – we started to feel the weight of the previous tastings in the day when we arrived here, which definitely colored our visit. Informal tasting at the shop counter was actually pretty good, with several options offered to us in small portions at no charge. Bruichladdich Octomore ended up on my top five “new” whiskies list. The girls – and one guy – behind the counter tried their very best to engage us. We probably did not do them justice. B-. 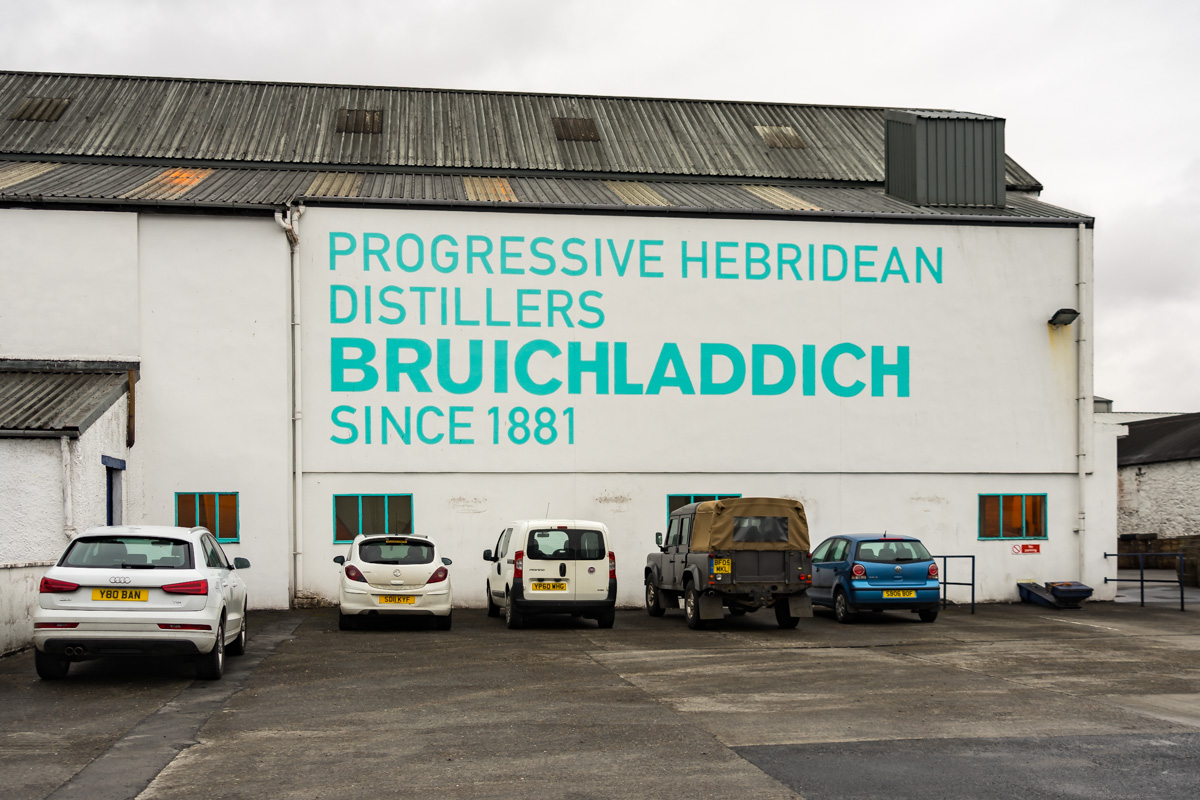 Kilchoman – the hardest to get to and, for my money, visually least impressive of all of the distilleries on Islay. If going to the fourth distillery for the day is already a bit of a stretch, the fifth is undoubtedly an excess. The shop is pretty good, with a defining feature of providing the history of lost distilleries of Islay. There is a café that we did not check out. We bought a single tasting set of 3 whiskies and surprisingly it yielded yet another entry for the top “new” whiskies list: Kilchoman Sanaig. The following day, we actually managed to squeeze in another non-trivial drive there and back in an attempt to improve our impression of the distillery, but succeeded only in confirming that the Sanaig is a pretty good choice for my taste. C+. 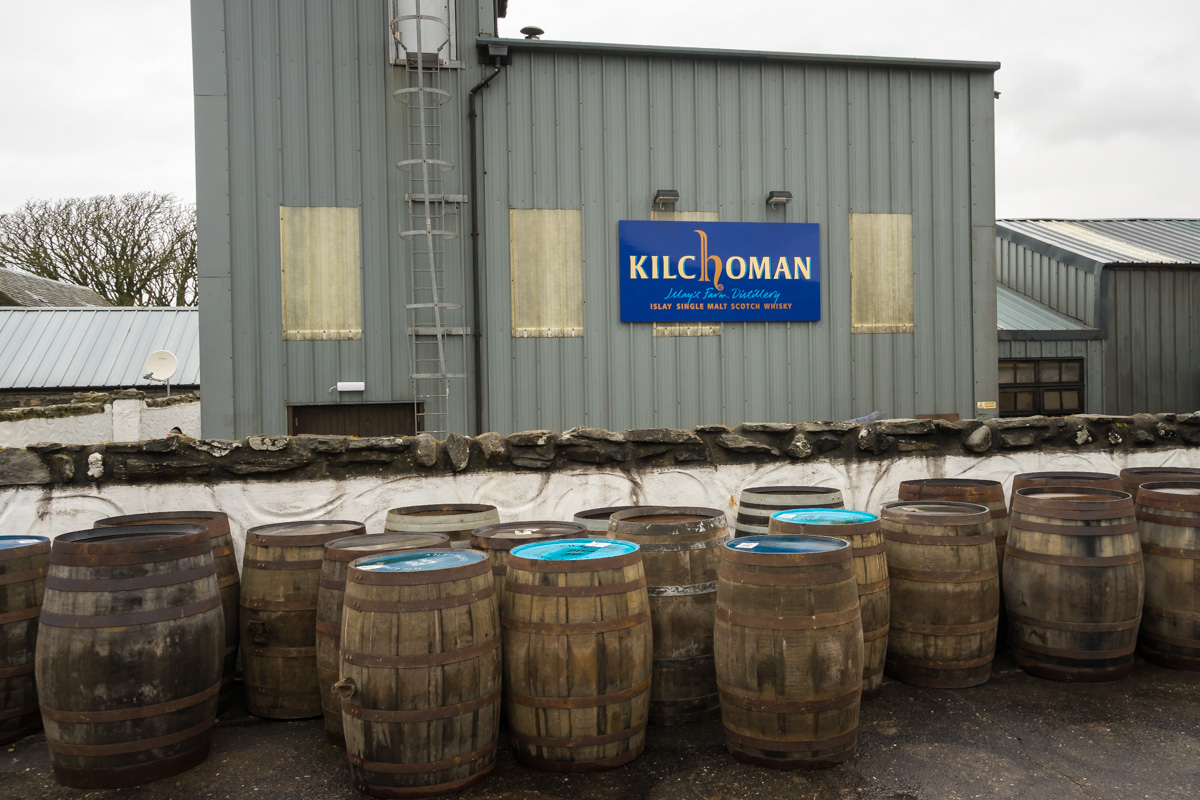 Lagavulin – surprisingly old-fashioned in that the shop is relatively small and the visitor spaces are decidedly not modern. The only distillery on this trip where we only got a single complimentary dram, on the strength of us being “Friends of the Malts”. The staff member who brought us the drinks appeared not entirely interested in us; we decided not to buy any of the other drams available for tasting, which probably diminished us in her eyes. Sipping that dram in the quaint lounge was pretty nice, though, and another younger member of the staff tried to connect with us at a later stage. I allow that if my original intention to go on a tour of Lagavulin was not affected by their planned closure on the previous day, we may have enjoyed it more. C+. 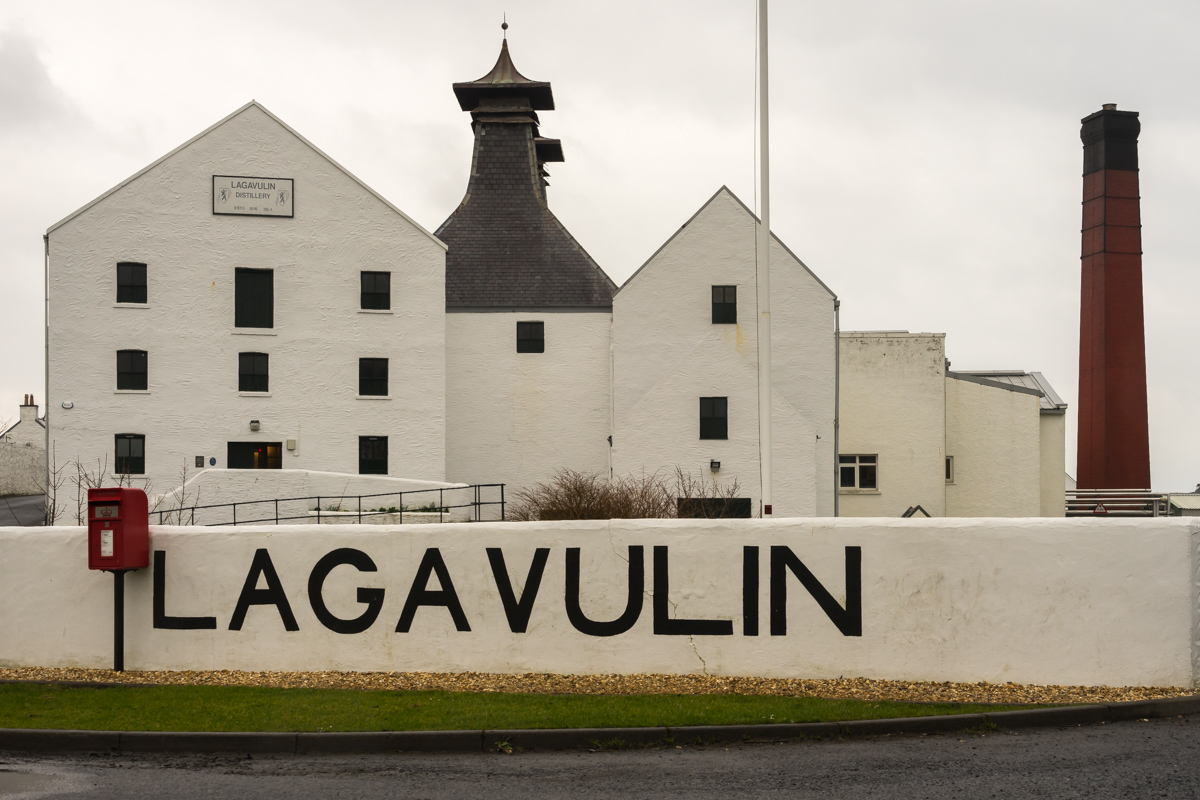 Bunnahabhain – the most picturesque final approach of all distilleries on Islay. Compact shop, where we had to wait for a few minutes until the next scheduled tour group departed. Once that happened, the remaining staff member spent good twenty minutes guiding us through tasting a series of whiskies; no charge. B. 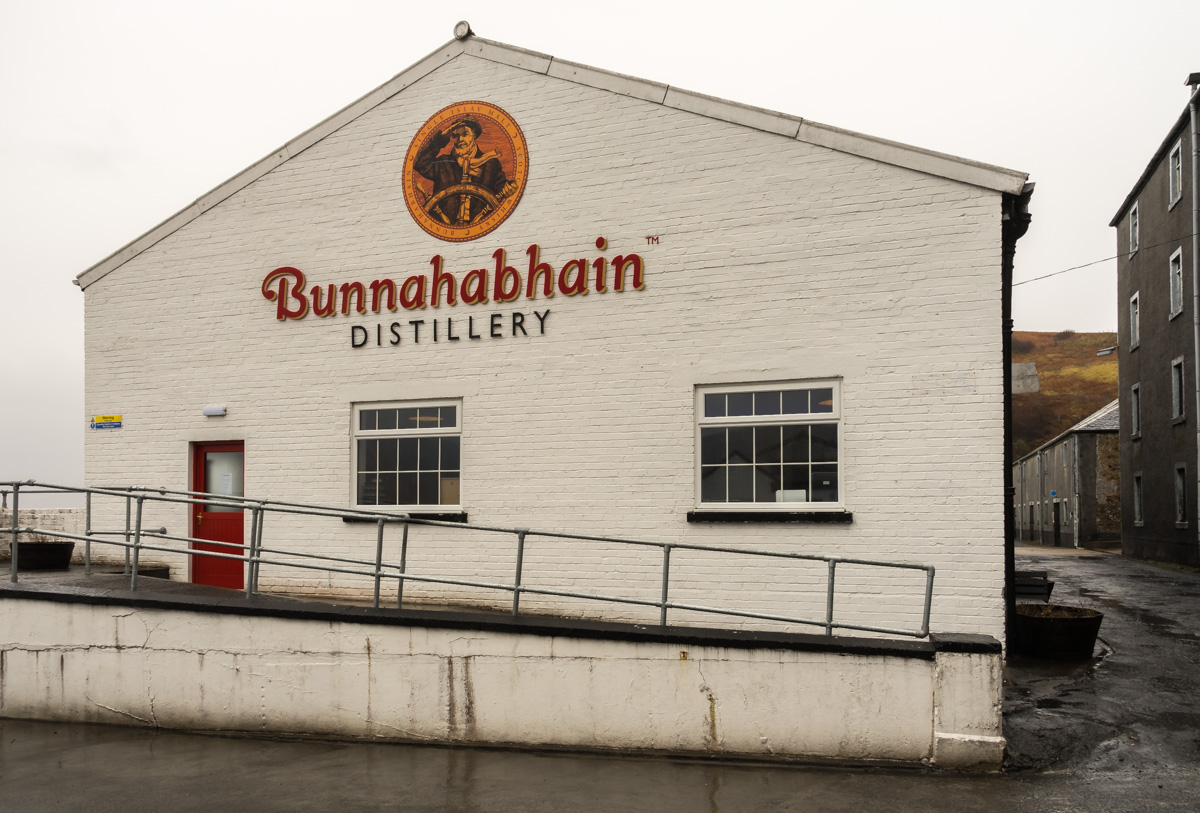 Caol Ila – the biggest (by production volume) of all of the Islay distilleries. We took a tour here, free for the “Friends of the Malts”. The scale is definitely impressive. The guide was lively enough, but we are probably no longer receptive to the finer points of the whisky-making process, having heard a similar presentation too many times in the past. The tour included one complimentary dram and we then procured one more at the shop. B. 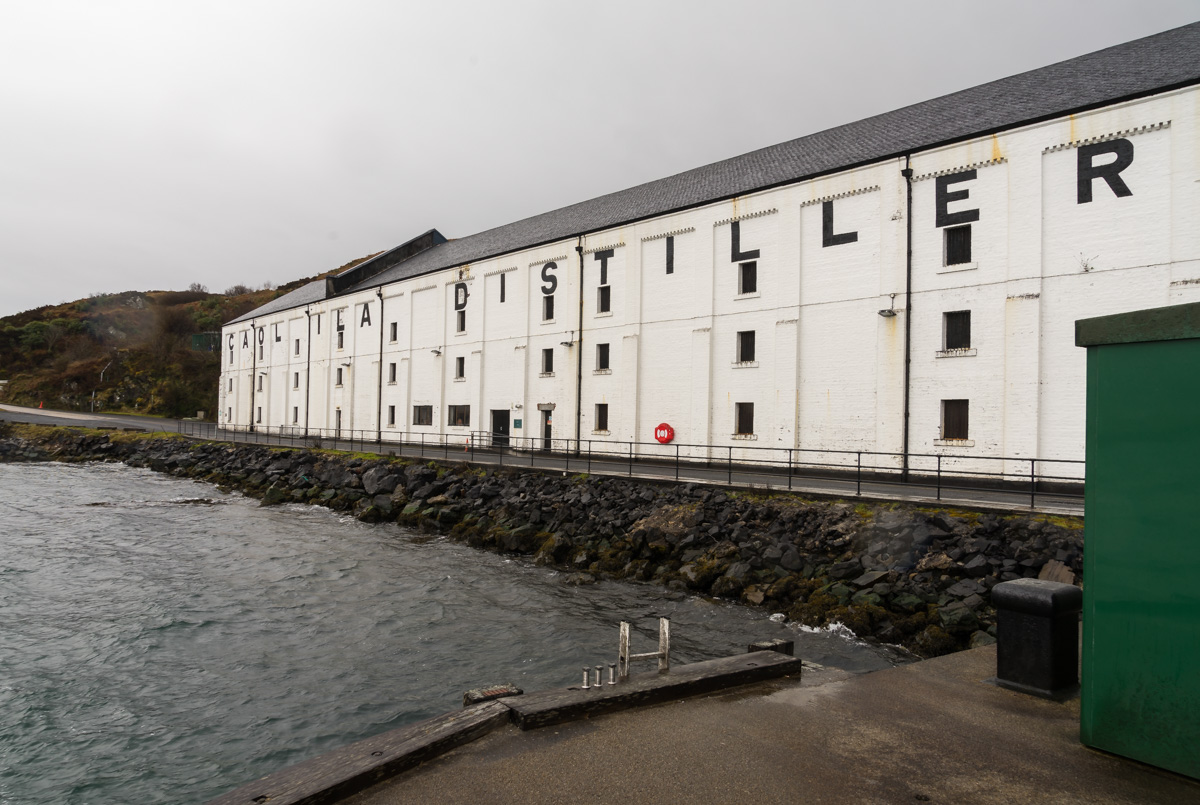 Auchentoshan – one of the two Lowlands distilleries that we visited on this trip and the only one in Scotland that uses triple-distillation process. It started us off on the wrong foot by being unexpectedly closed when we drove up on the very first day of our itinerary. We swapped it with nearby Glengoyne and came back at a later date. That prior mishap helped us solicit a 3-dram tasting set for free. The set included Auchentoshan Three Wood, which is my new most favorite whisky. The well-appointed shop has a nice seating area for this type of impromptu tasting, and also highlights nearby attractions on the wall displays. A small screening room off the shop loops a 6-minute movie about the history of the distillery. B+. 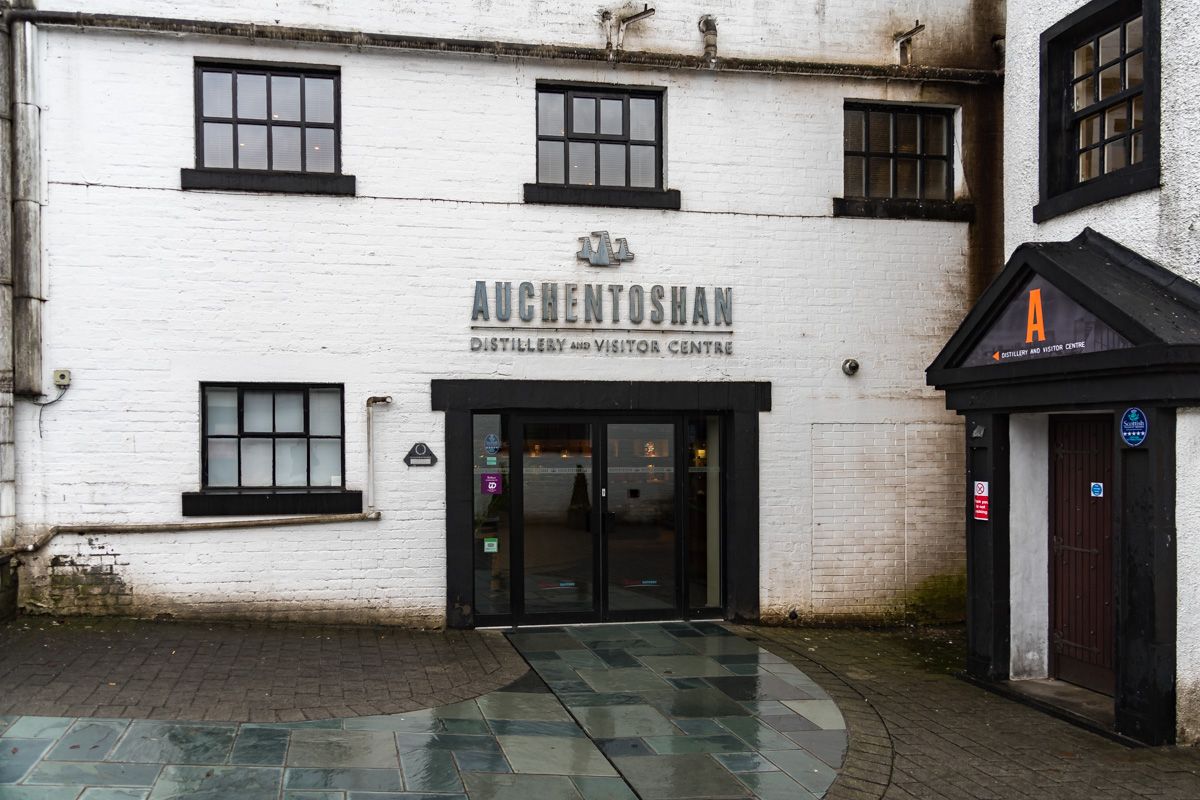 Deanston – a dramatic industrial look of the exterior is balanced by one of the brightest shops – large windows with a view to the river letting in more light than at any distillery I have seen. A helpful staff member offered us 3 whiskies to taste at no charge, one of which was Deanston Palo Cortado – the last (but not least) entry on my top five “new” list. I also took advantage of the coffee shop in the adjoining similarly well-appointed room. B. 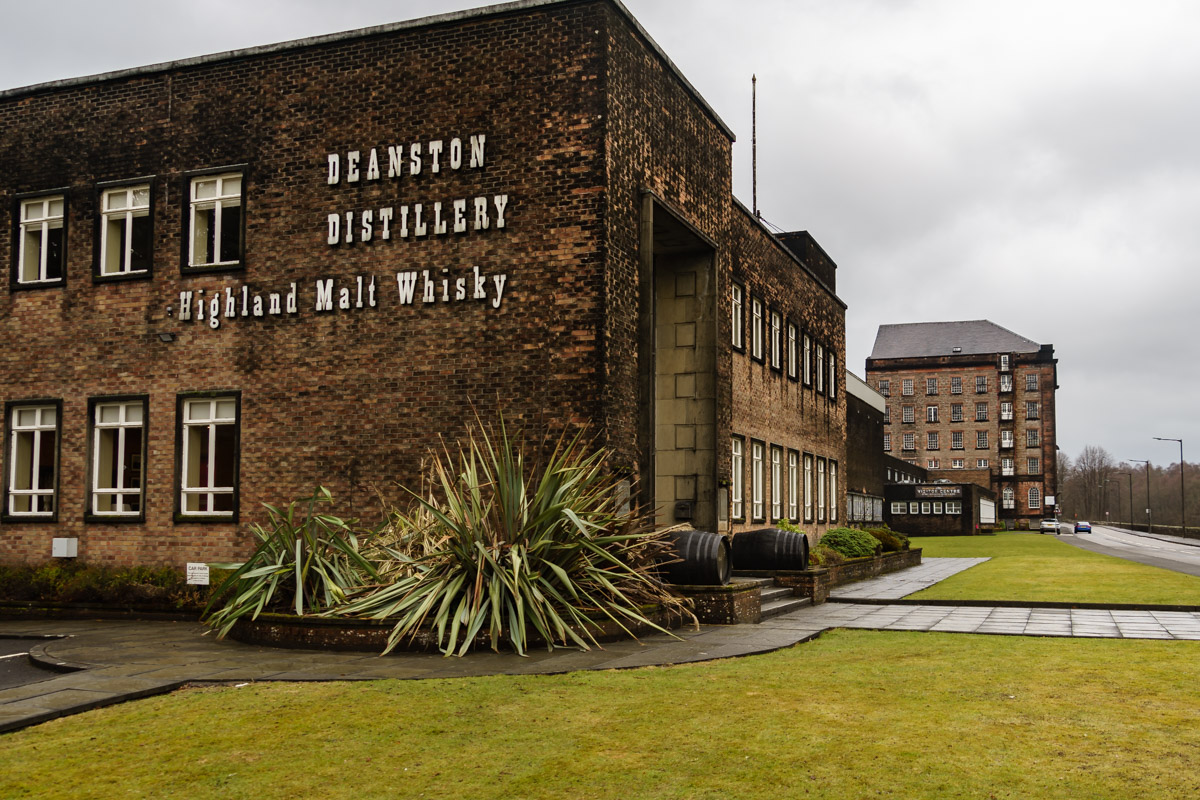 Tullibardine – the shop and lounge area here is among the most spacious anywhere, with several rare and really expensive bottles as headlining exhibits. There are several tasting tray options on the menu; we went for a combination that allowed us to taste the entire distillery line. With 7 drams to share at our last stop for the day, we spent nearly 2 hours in the lounge – the “drinking” whiskies were not bad, and the “thinking” ones properly stimulated wide-ranging conversations. A-. 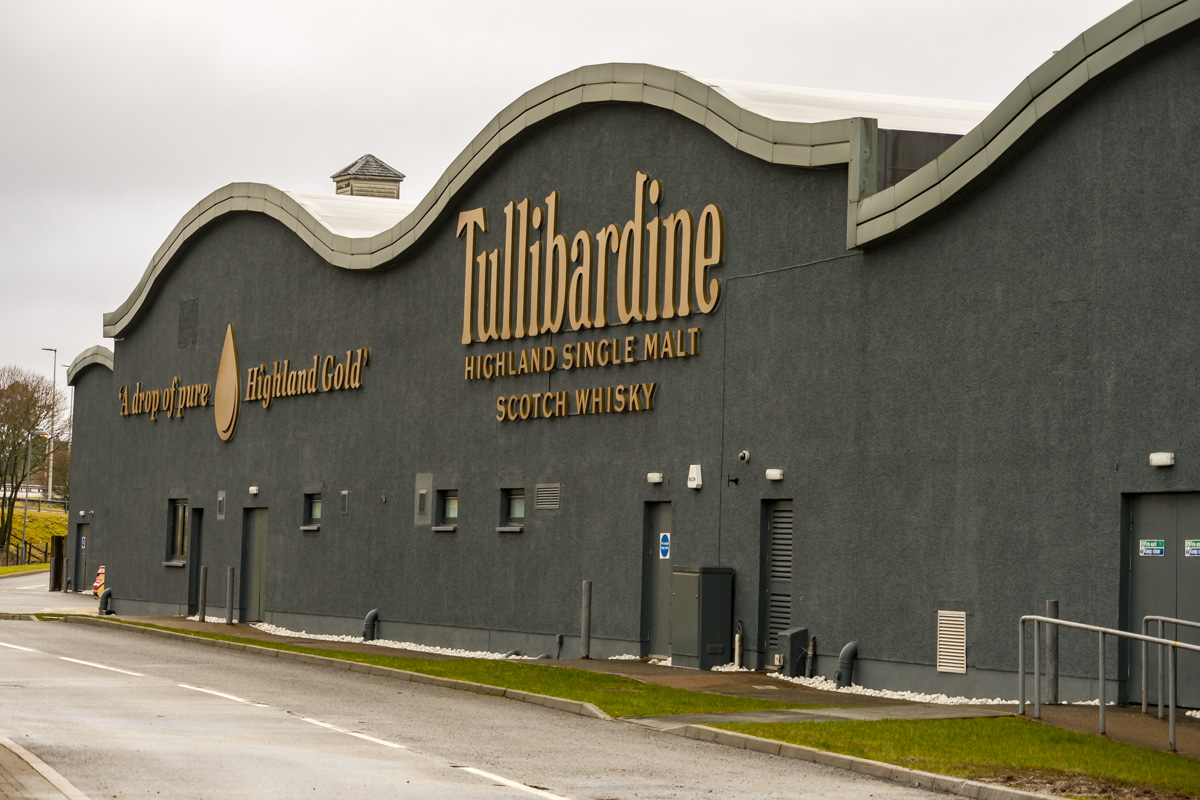 Glenkinchie – another of the Lowlands distilleries on our itinerary impressed us by the onsite museum of whisky-making, which includes a 1/40 scale model of a distillery, which we were told is fully operational. We got 3 drams to try, at no charge as the “Friends of the Malts”. B+. 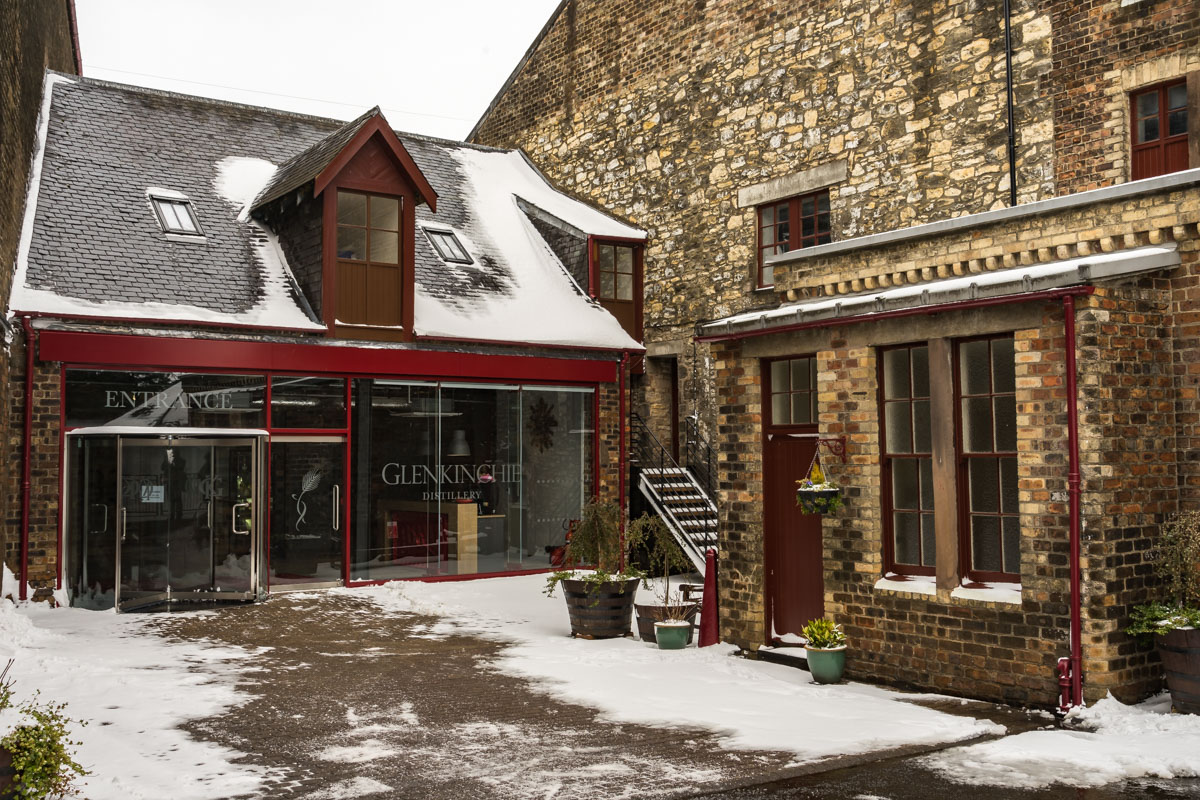 Kingsbarns – on the picturesque coast of Fife, this farmhouse-like distillery is one of the youngest in the country. They are still some years away from offering their own product, but they bottle and sell as their own brands several blends and single malts that they acquire elsewhere. The staff member who greeted us mistook us for someone else he was expecting, but even after recognizing the mix-up, he still offered us 5 different whiskies to try – and may have offered more if we had not stopped him. He walked us through an exhibition next to the shop, which included an interesting smelling exhibit that tested our perceptions of various scents present in different whiskies. We also took advantage of the coffee shop on the premises. A-. 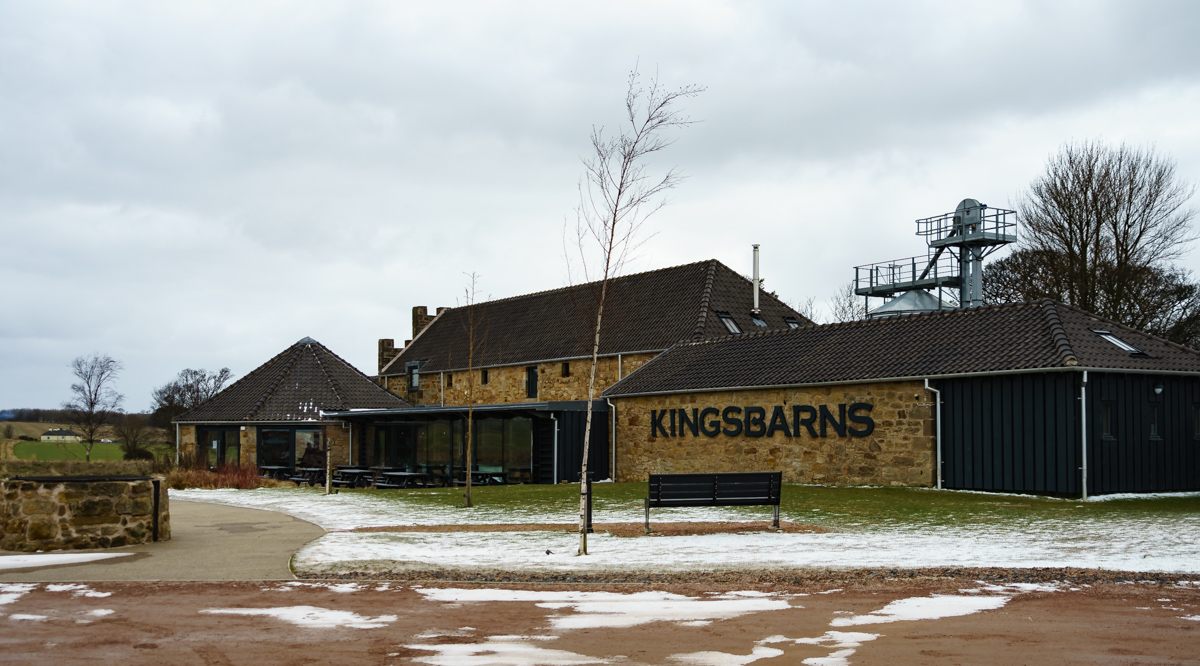 If my counts are correct, this means that we had 54 drams to taste at all of these distilleries. Not counting several nightcaps at the local bars.