We lately allow only a single day in Barcelona for our stays at Costa Brava – the distance between our base and the city makes more frequent visits a bit impractical. Last year, if you recall, we specifically targeted touring Palau de la Musica Catalana, and I also managed to get in a few morning hours of walking around major Gaudí landmarks. This year we decided to catch up on a couple of Gaudí masterpieces.

The first was the incomparable Sagrada Família. We last visited the great church years ago when the interior was still under construction. That has been completed and the church was consecrated in 2010. I first saw the completed interior in 2011, but did not carry a camera with me back then. A proper visit was overdue.

Here is the look at Sagrada Família from Avinguda de Gaudí. 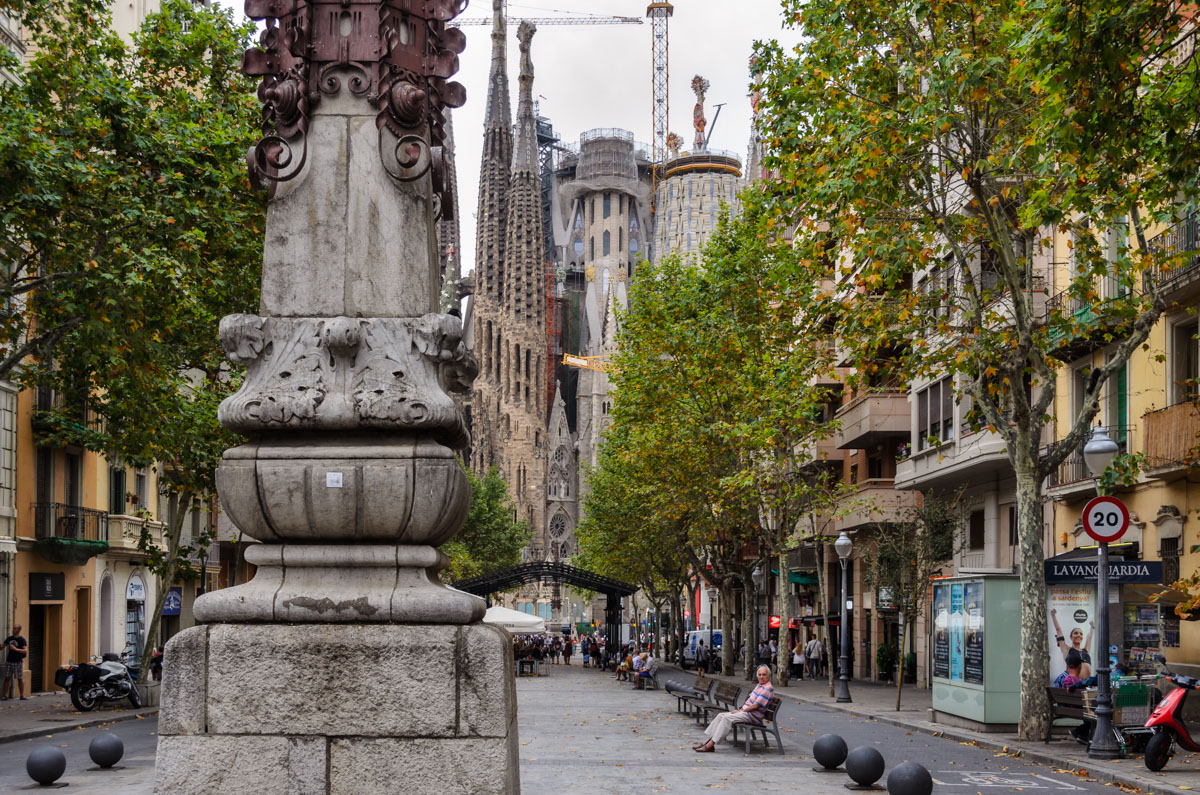 The construction cranes are a visual clue that there is still plenty of work to be done before the church is fully built. Current estimates put it around year 2030.

On the inside, Sagrada Família is like nothing else in the world. 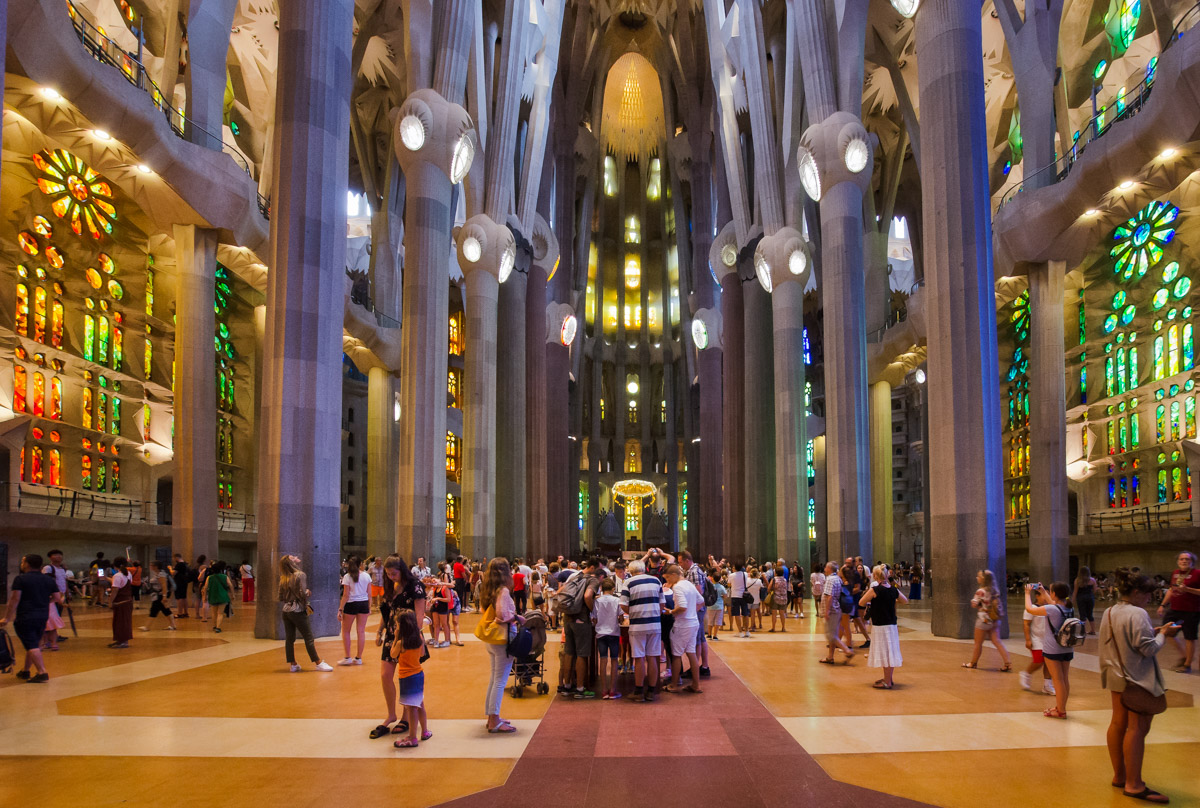 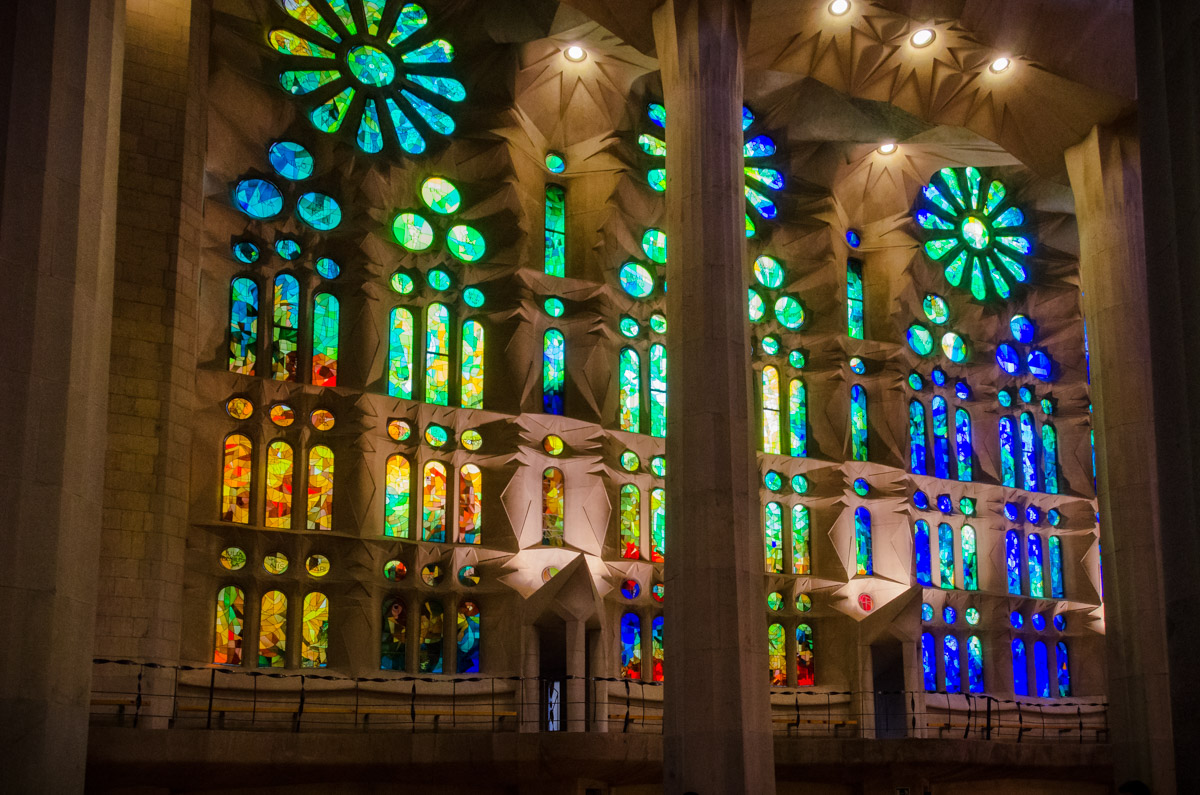 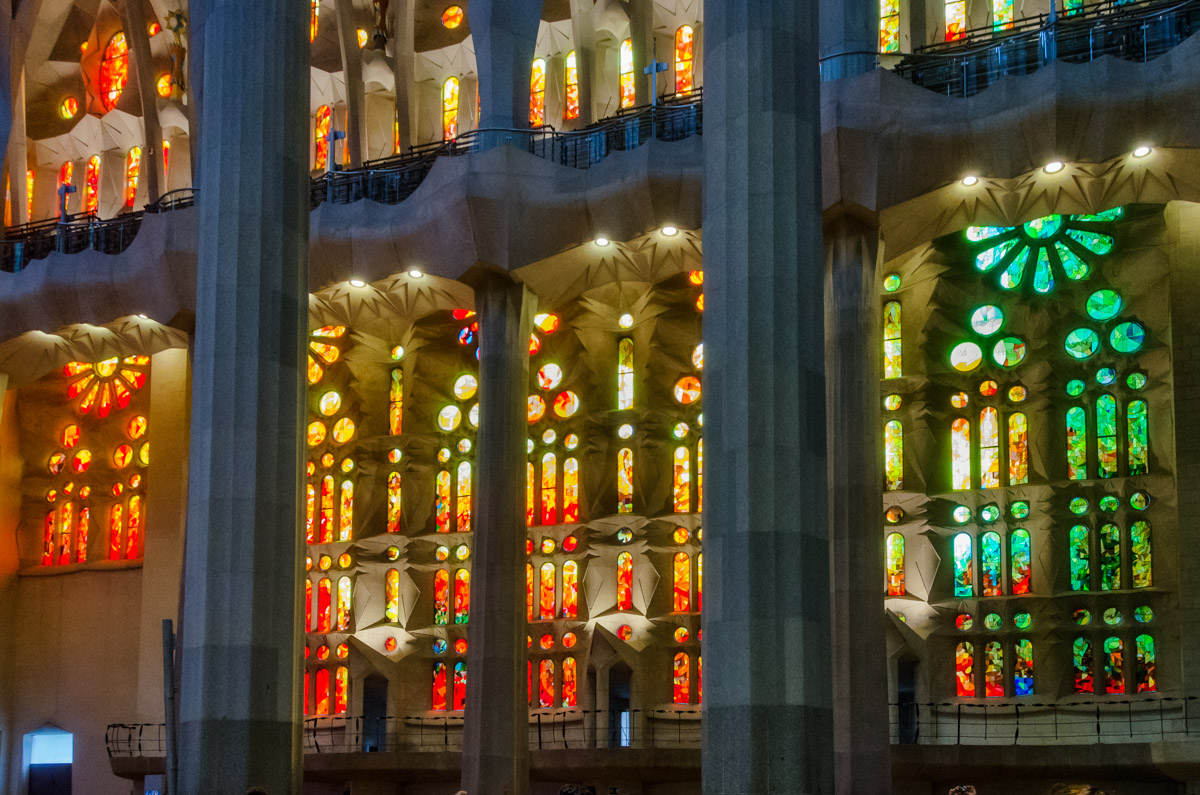 The columns that evoke palm trees rising up to the forest-canopy-like ceiling is among the defining features of the church. 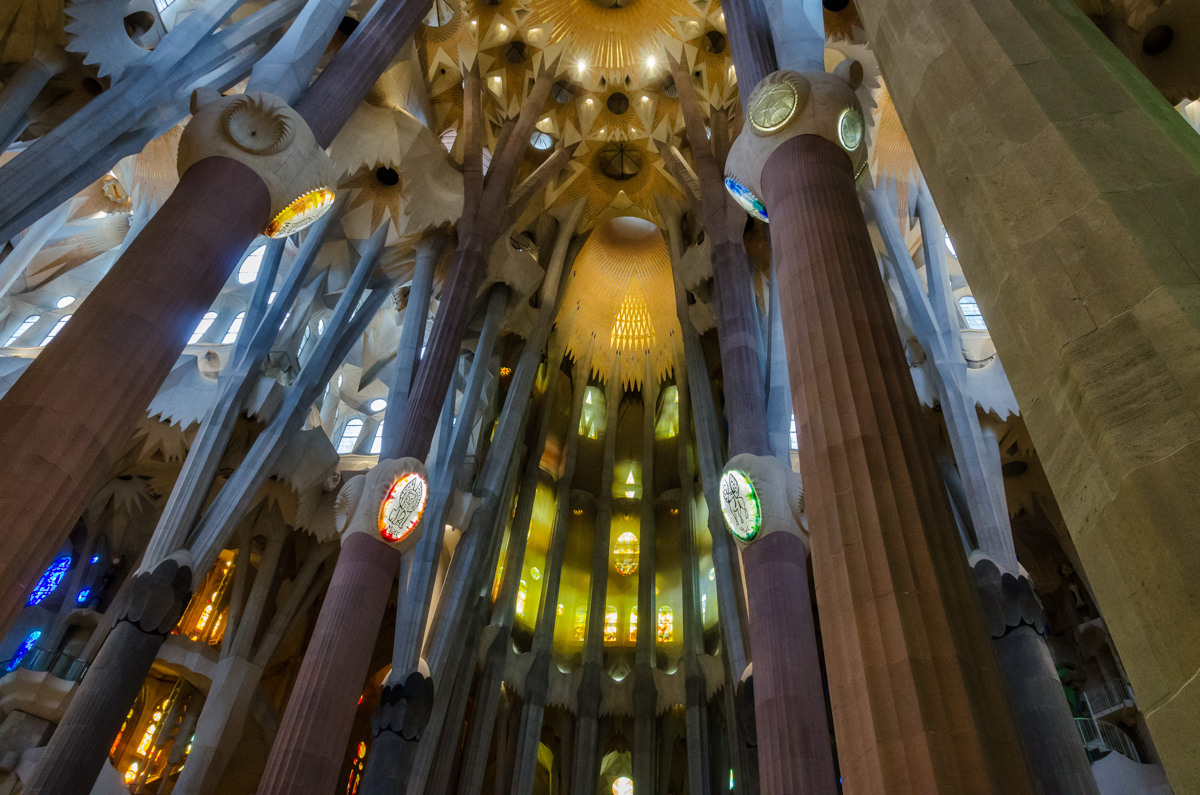 A closer look at the altar and the organ. 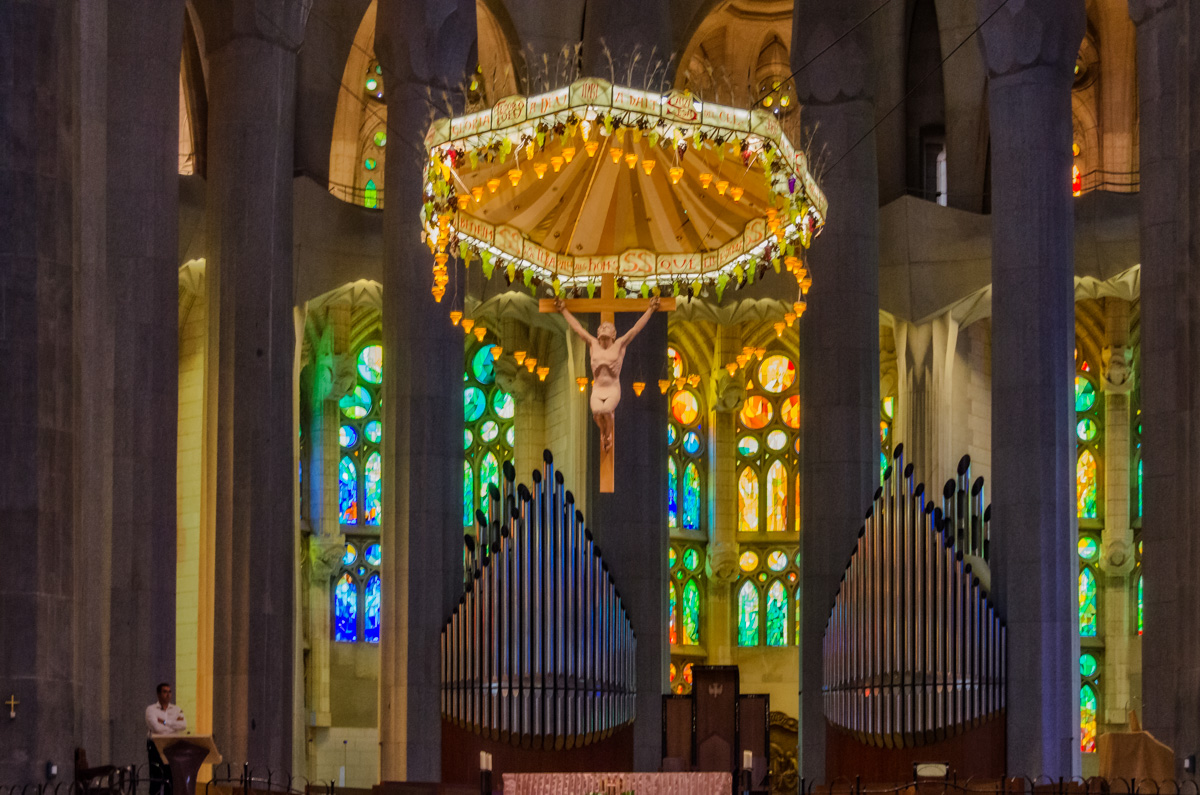 The stained-glass windows are bursting with vivid color patterns. A few close-ups. 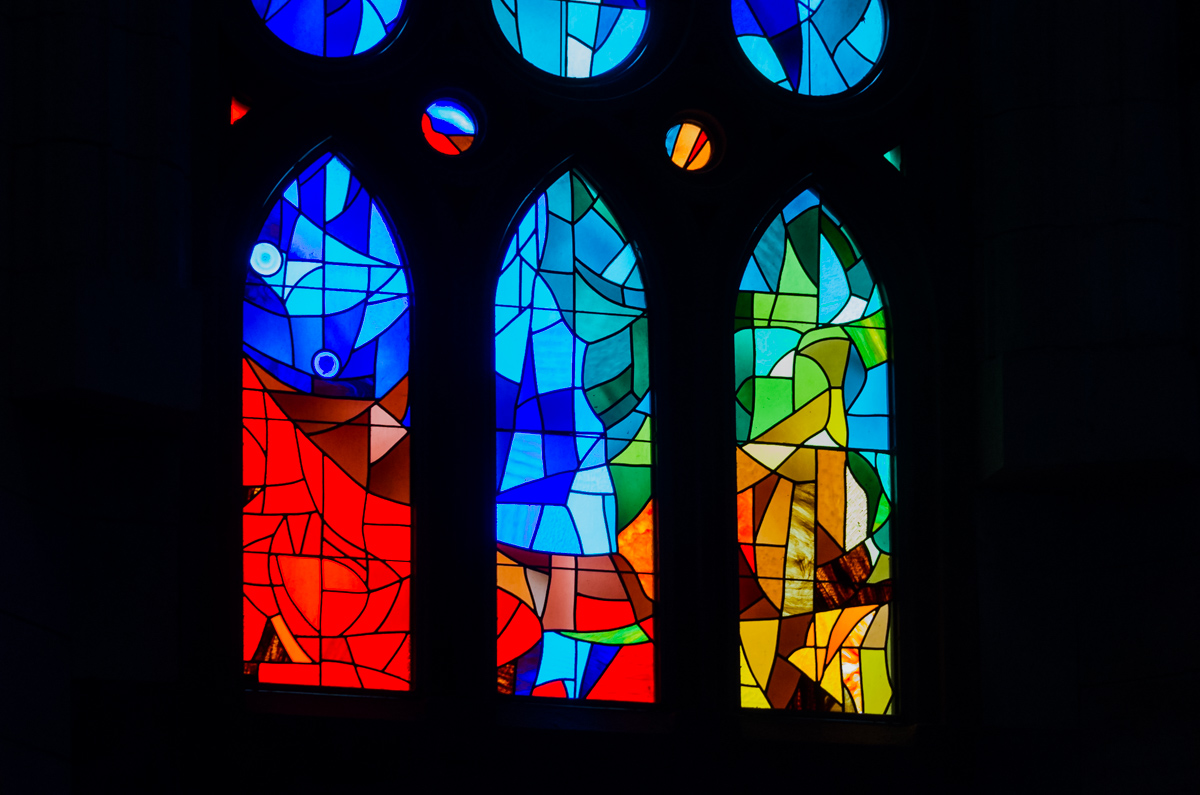 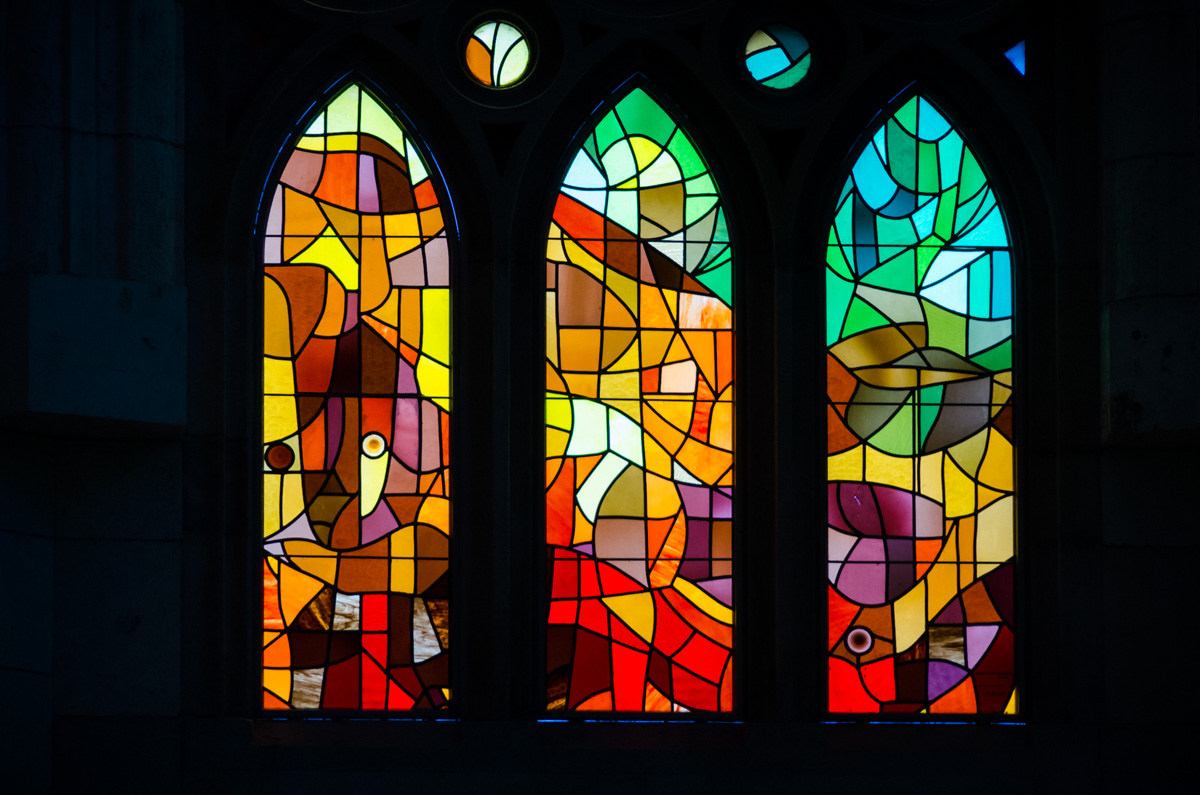 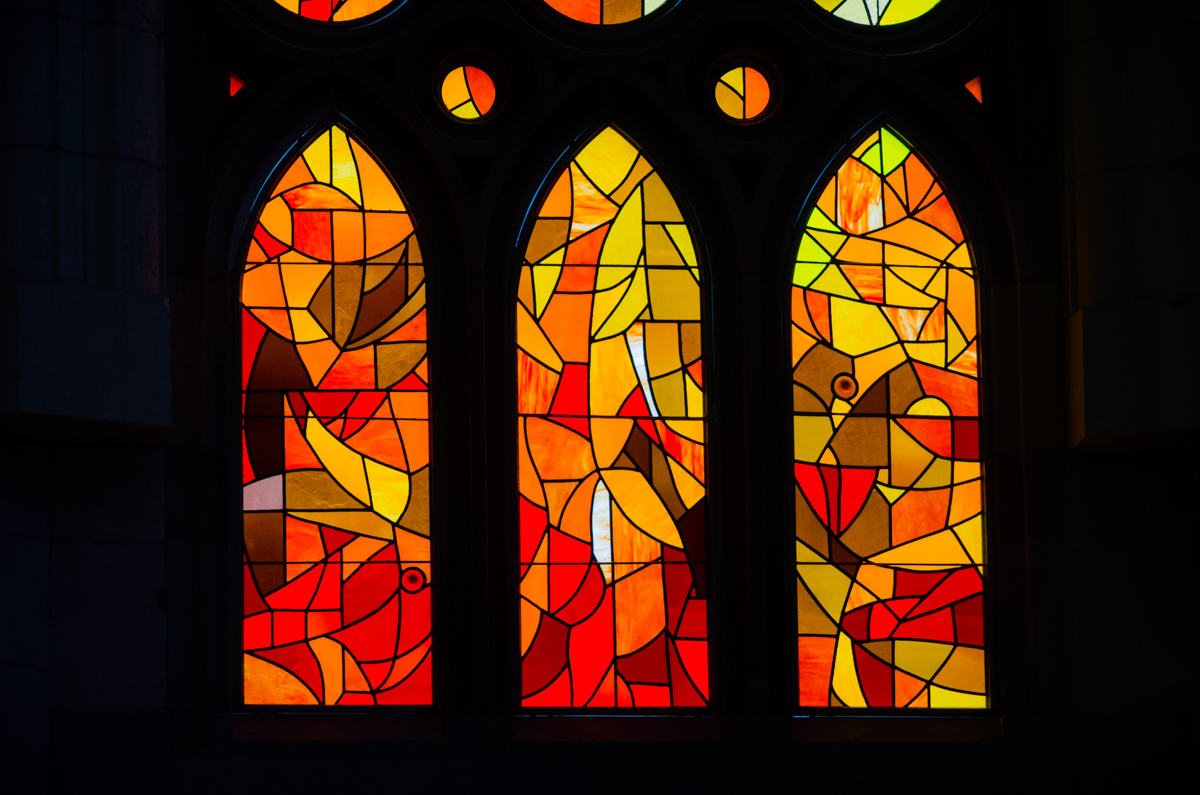 The western façade, called Passion, was constructed decades after Gaudí’s death. Its comparatively plain and angular decorations depict the last night and the crucifixion of Jesus and create a fairly disconcerting vibe. Which is what Gaudí himself reputedly wanted. 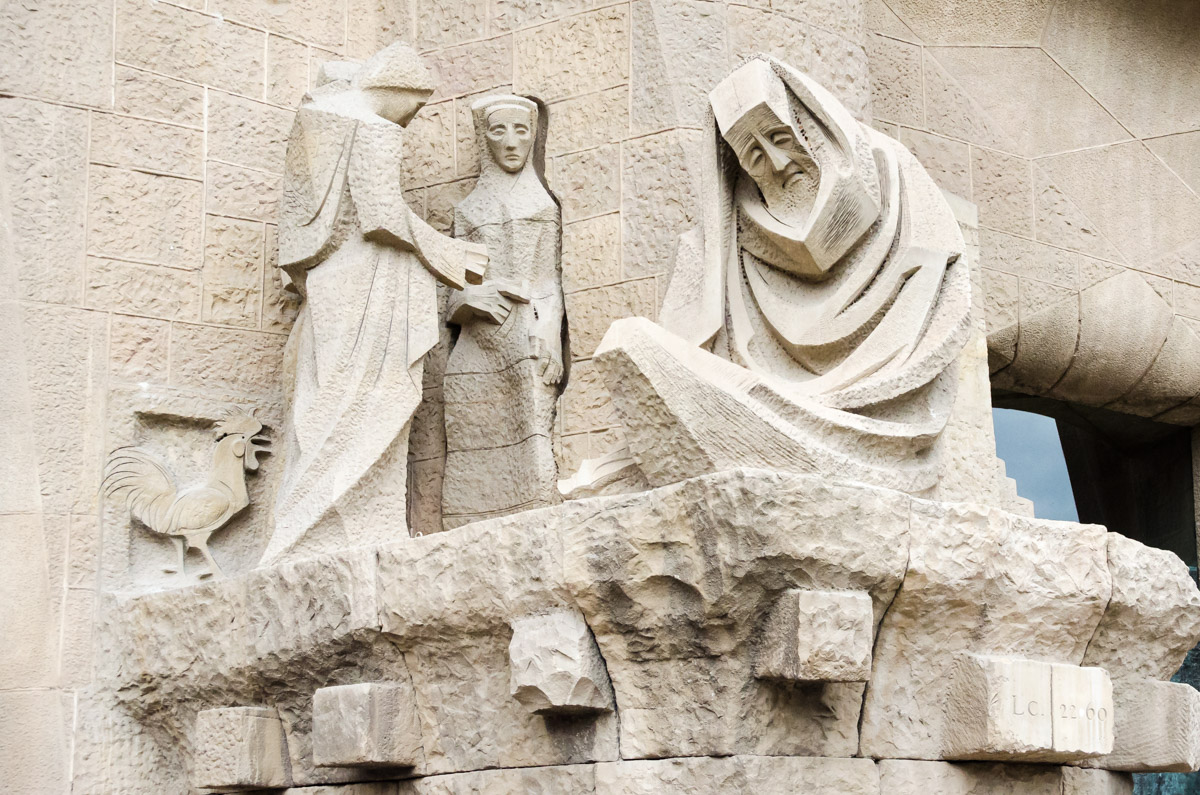 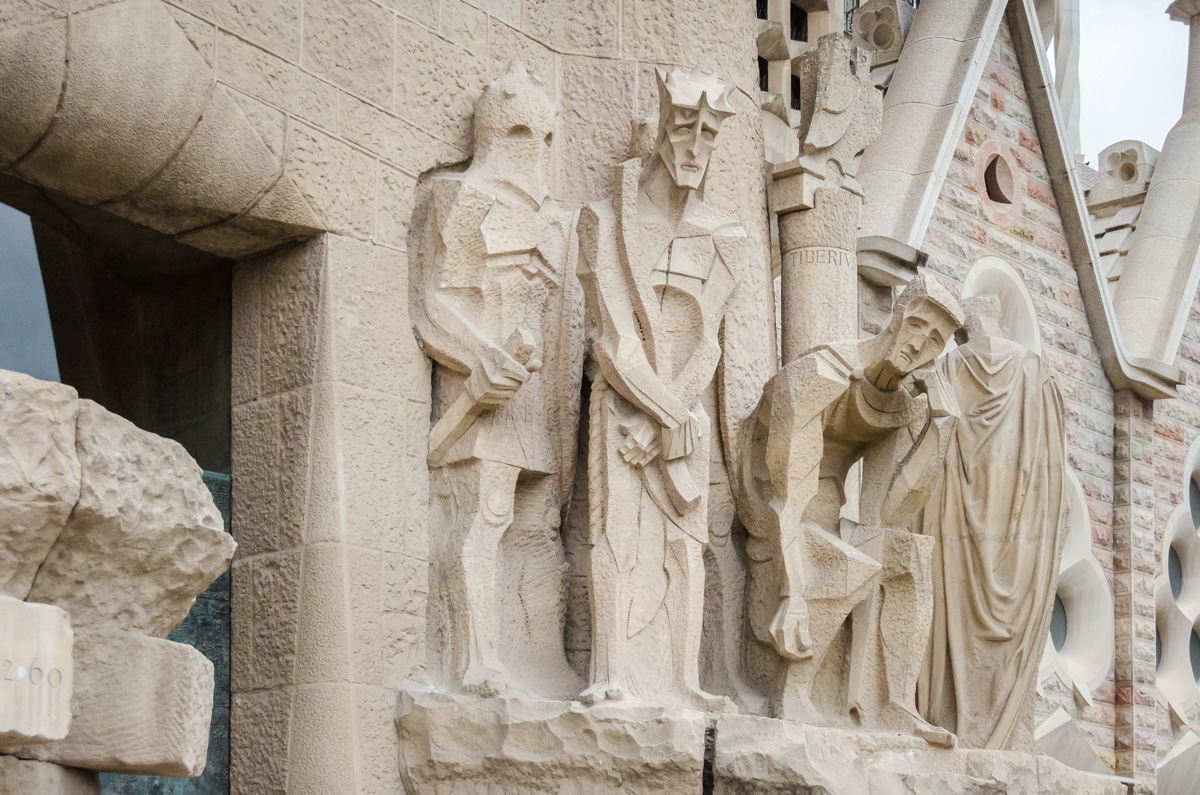 An imperfect magic square is somewhat incongruously positioned next to the Kiss of Judas. 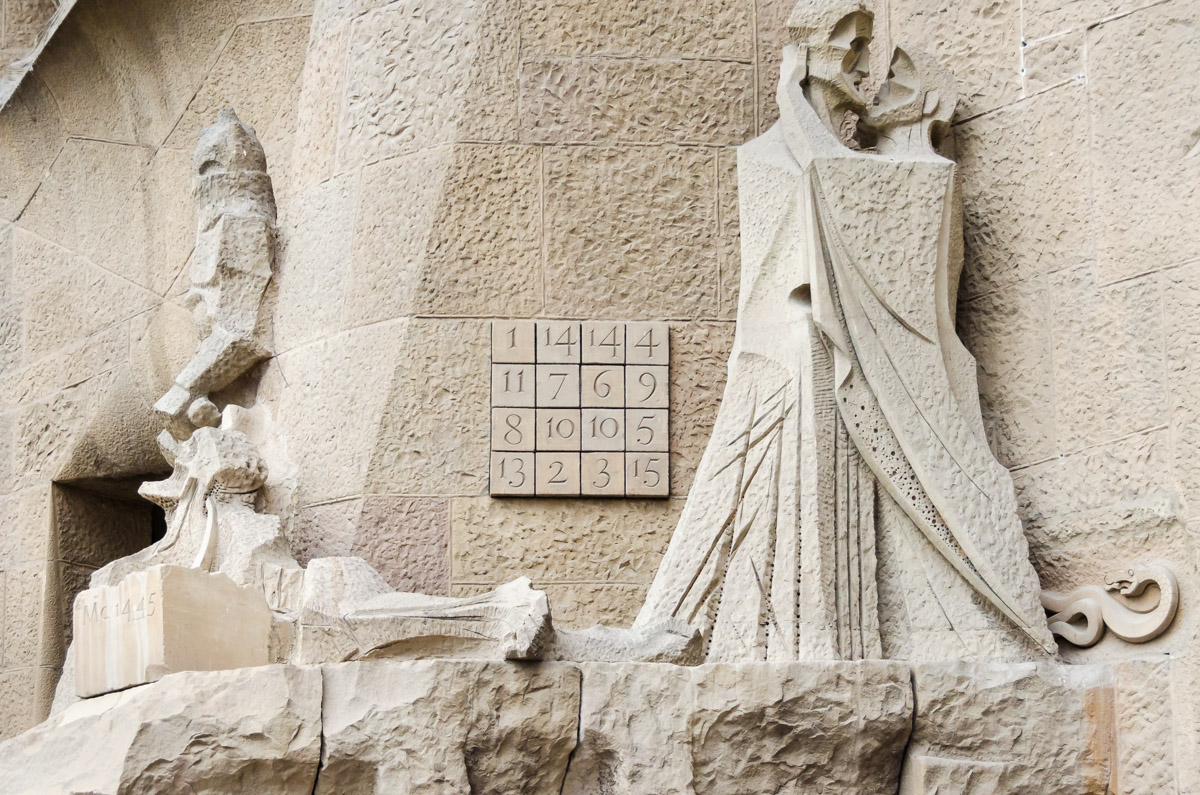 Those not mathematically inclined will forgive me a briefest of side trips into the discipline that I was trained in in my youth. A perfect magic square should not contain repeating numbers. However, for a 4×4 square with numbers running sequentially from 1 to 16, the magic constant would be 34. So the author of the Passion Façade’s sculptures Josep María Subirachs cheated a bit, replacing 12 and 16 with another 10 and 14 to get to the Christ’s age of 33 on each row, column, and main diagonal.

On the east side, the Nativity Façade is a lot more elaborate and celebratory. It was also finished after Gaudí’s death but has the distinction of being largely overseen by the master himself. 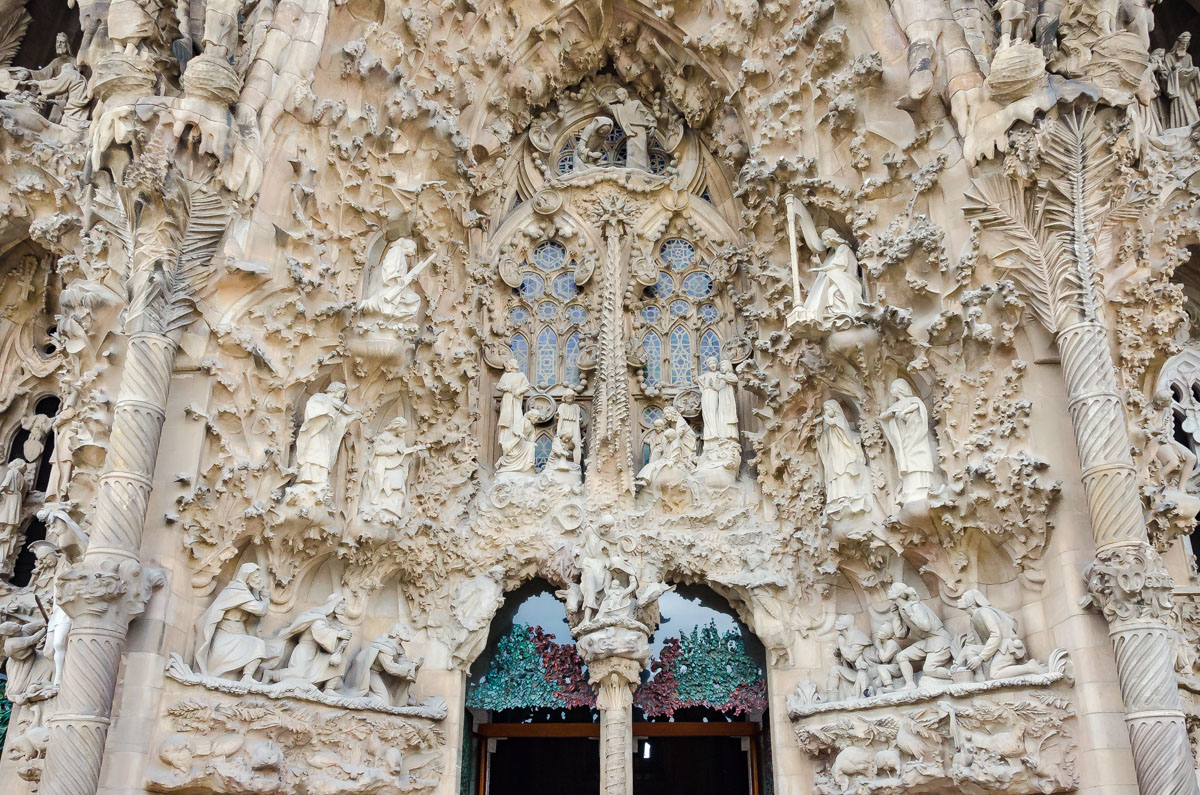 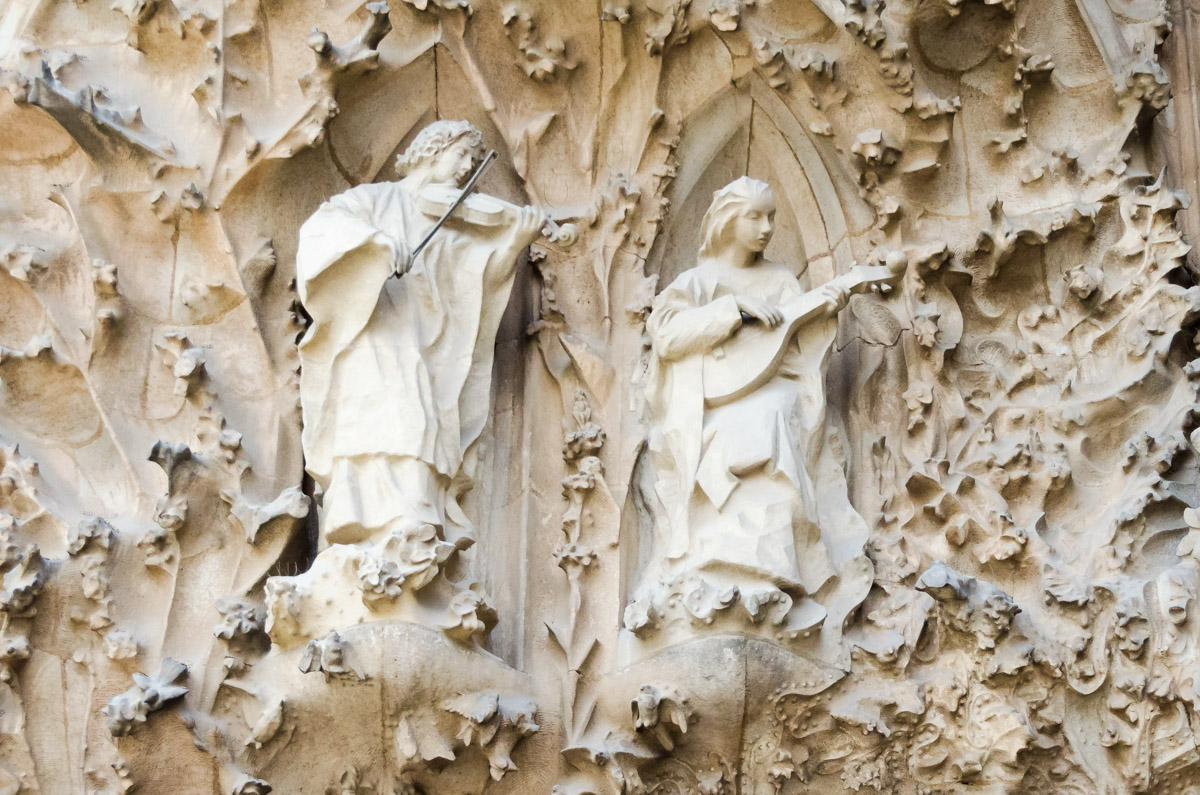 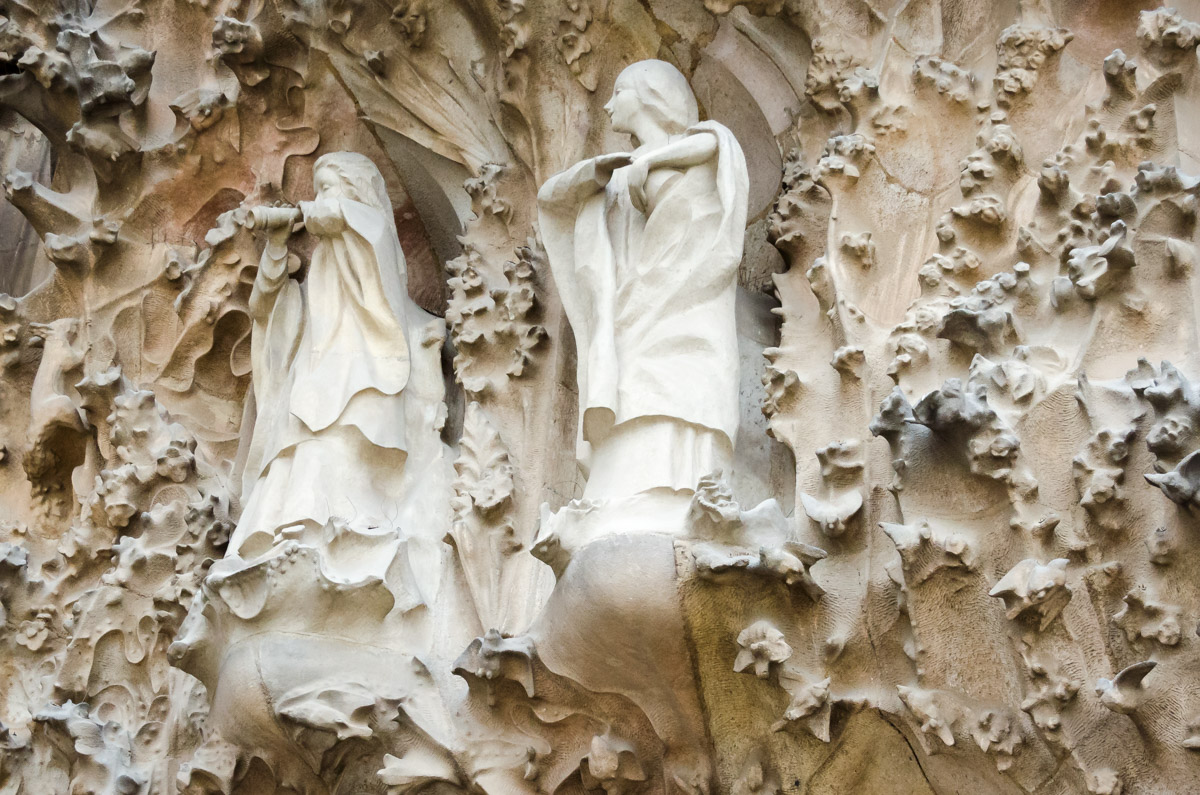 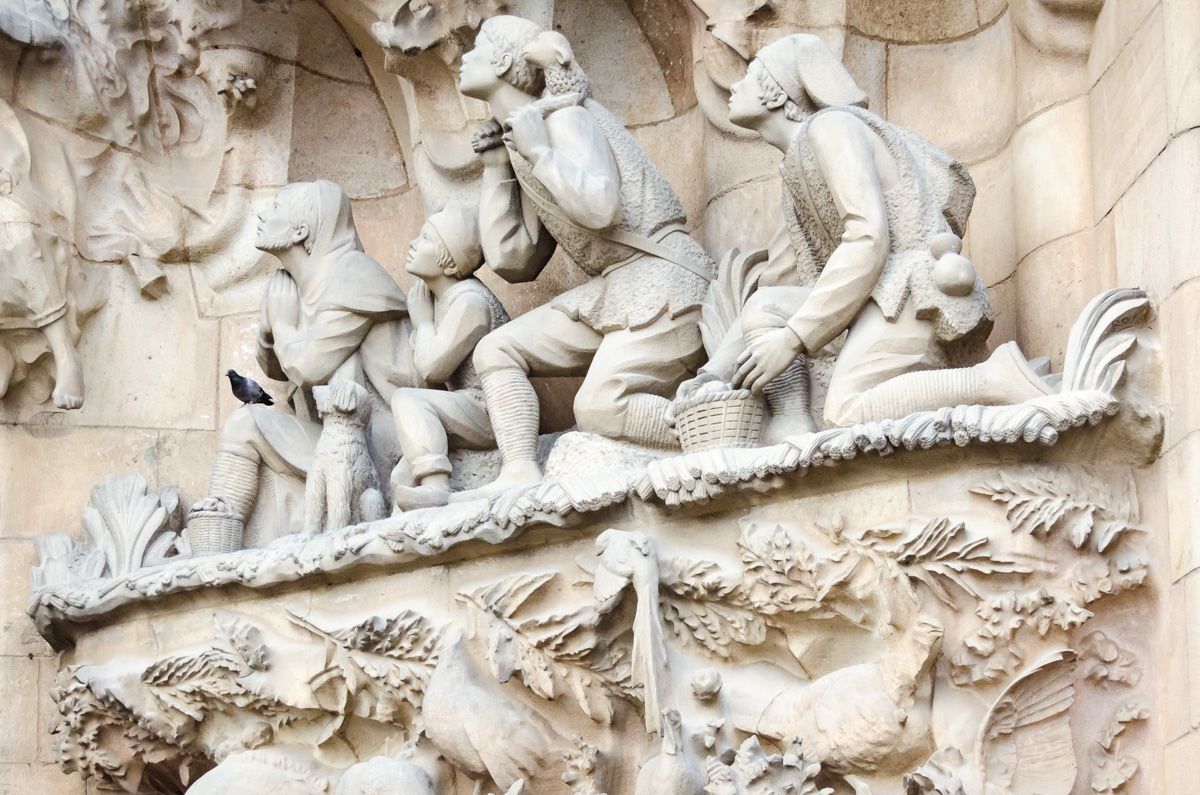 I always say that if you can only see one sight in Barcelona, you have to make it Sagrada Família. These days, it requires a bit of planning, as access to the church is regulated and you have to buy tickets online in advance in high season. We goofed on that count last year but rectified it this time around.

Our other stop was Güell Palace, which we had never managed to fit into our itineraries in the past.

It is the earliest of the World Heritage-recognized works of Gaudí, completed in 1888. Although reasonably ornate and full of fine decorative features, it is decidedly less exuberant than either Casa Milà or Casa Batlló and nowhere close to the explosion of light that we saw above at Sagrada Família.

The main staircase is among the most striking features of the palace. 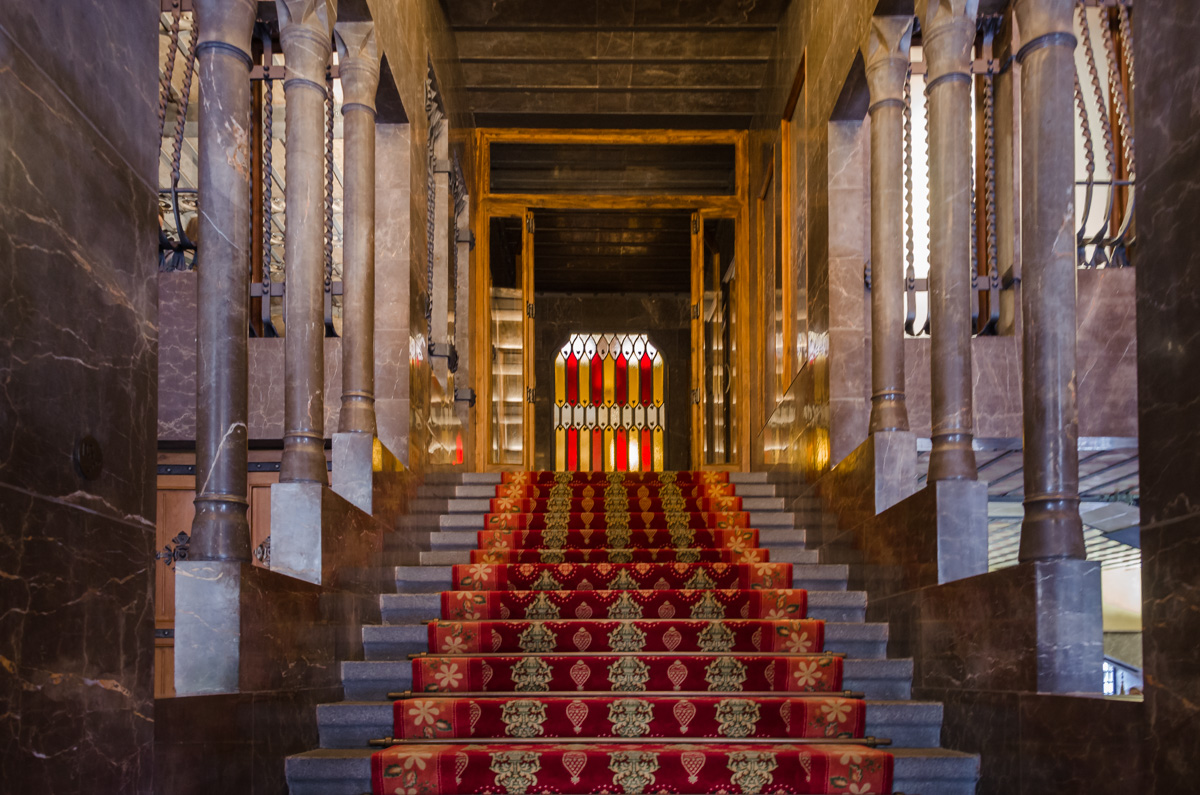 Dark-tone marble or dark-wood paneling makes the interior rather subdued. Wrought-iron decorations are exquisite but obviously add to the somewhat somber mood of the place. 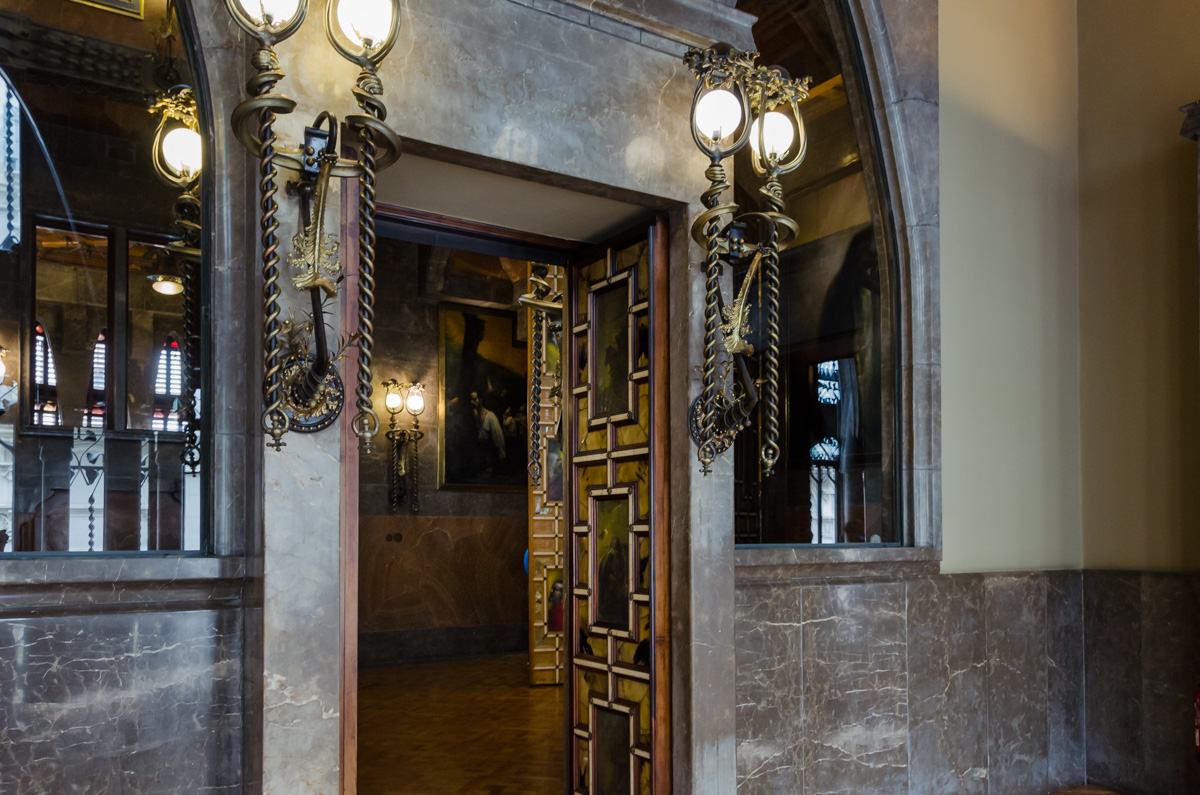 A bit brighter are the upper levels of the main reception hall, which include an industrial grade organ – not something you normally find even in a palace. 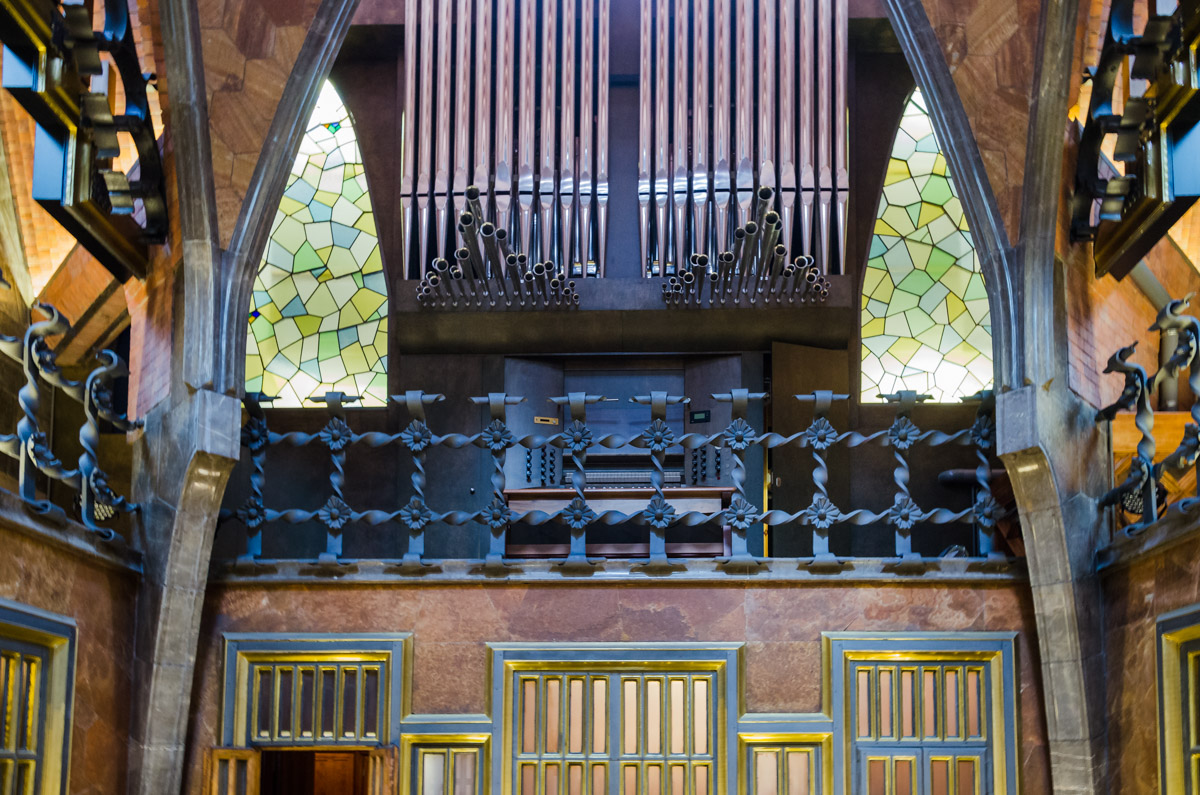 View from the upper gallery on the reception hall and the golden foyer of the palace’s private chapel. 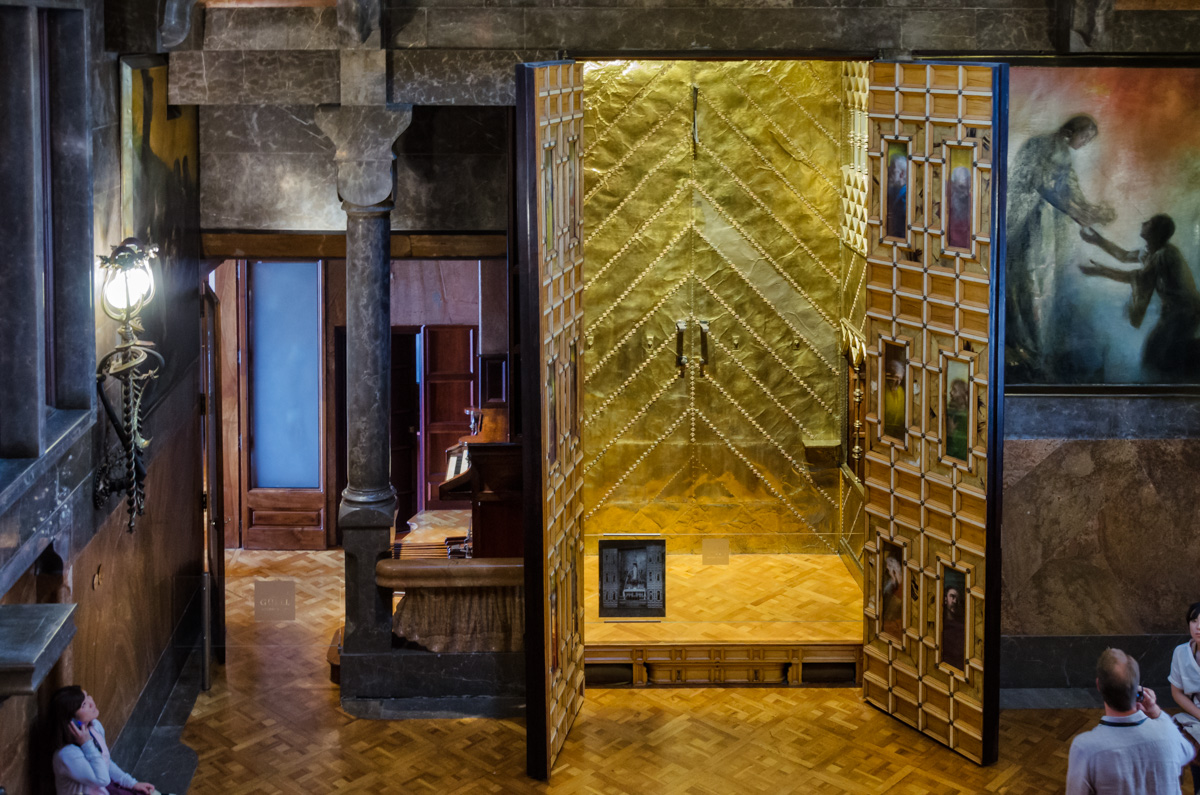 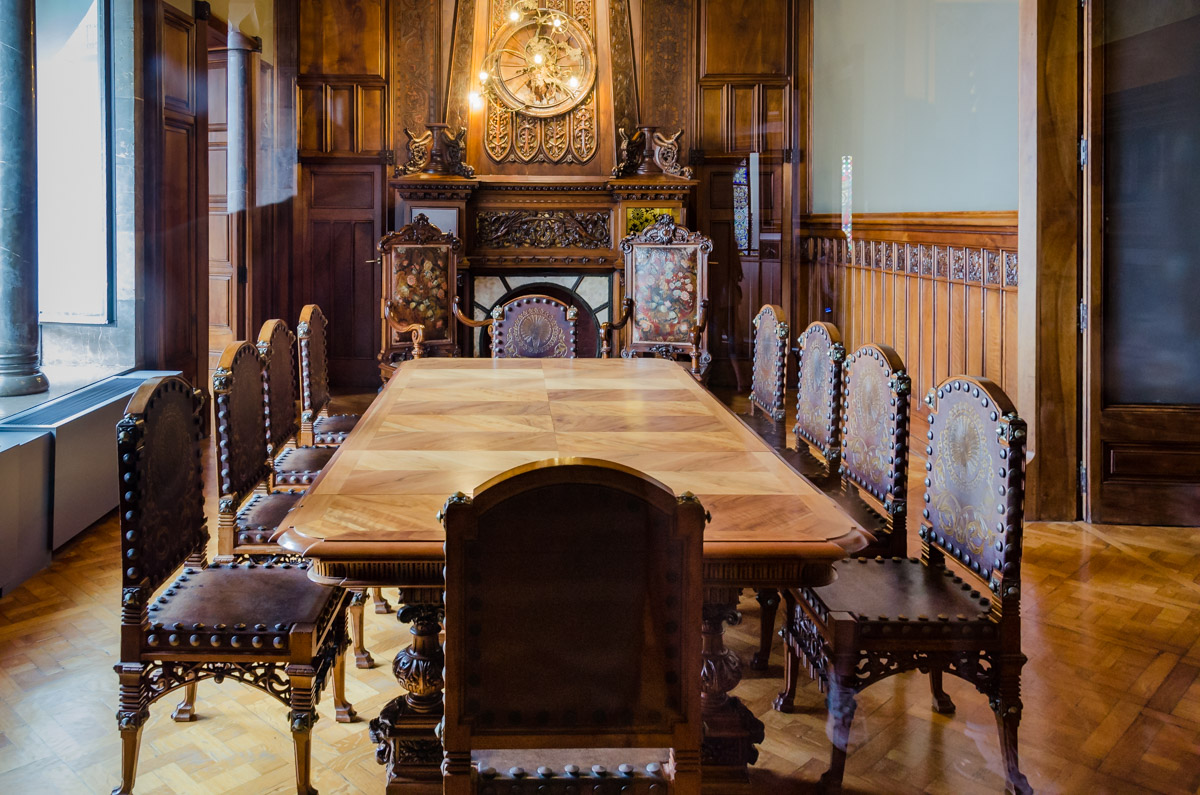 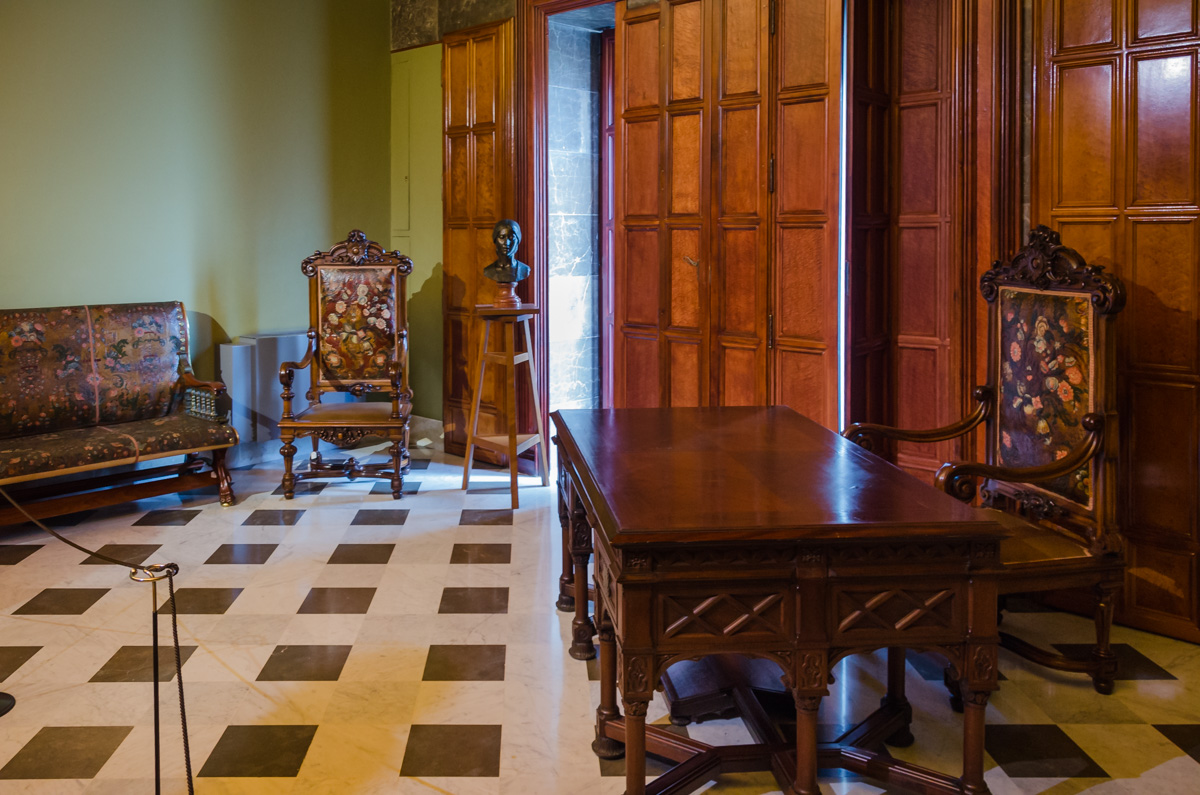 At some point in the tour, you step out on the back terrace. The exterior view of the bay window that looks out on the same terrace is pretty impressive. 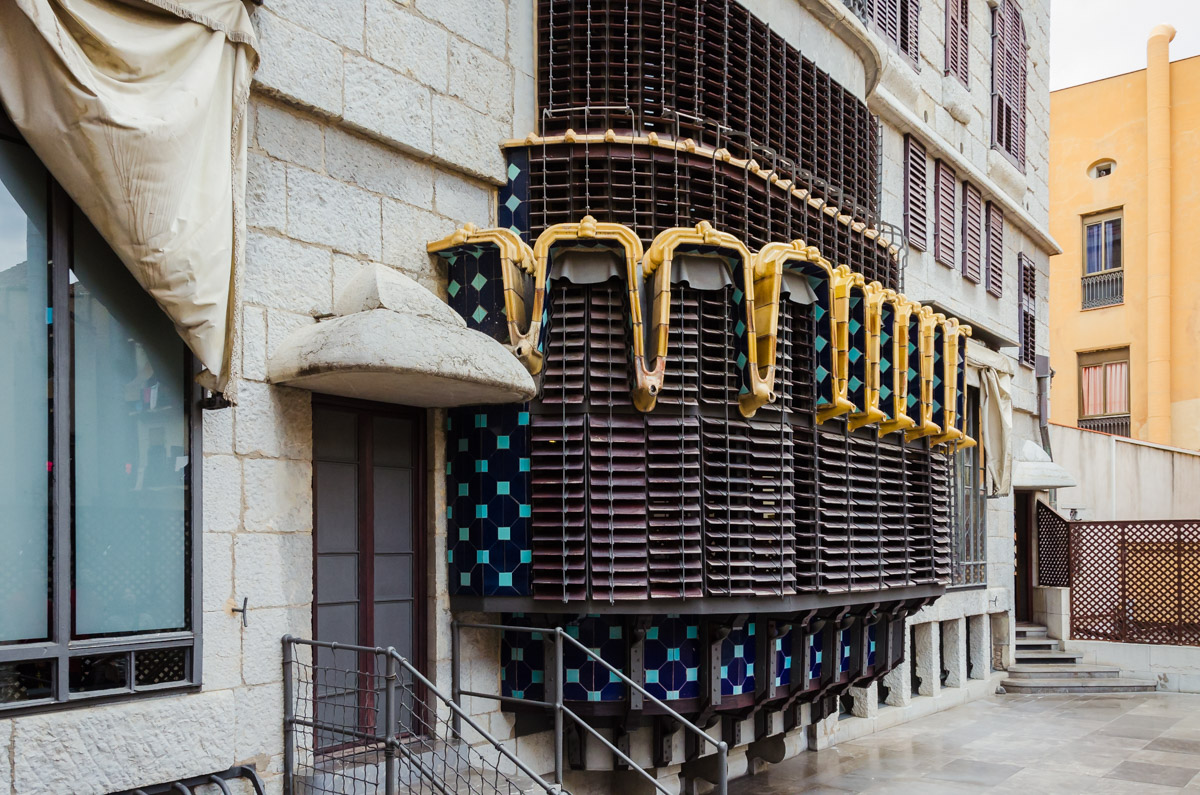 The crowning highlight of the Güell Palace is its rooftop. Maybe not as majestic as La Pedrera’s, it is definitely the latter’s colorful forebear. 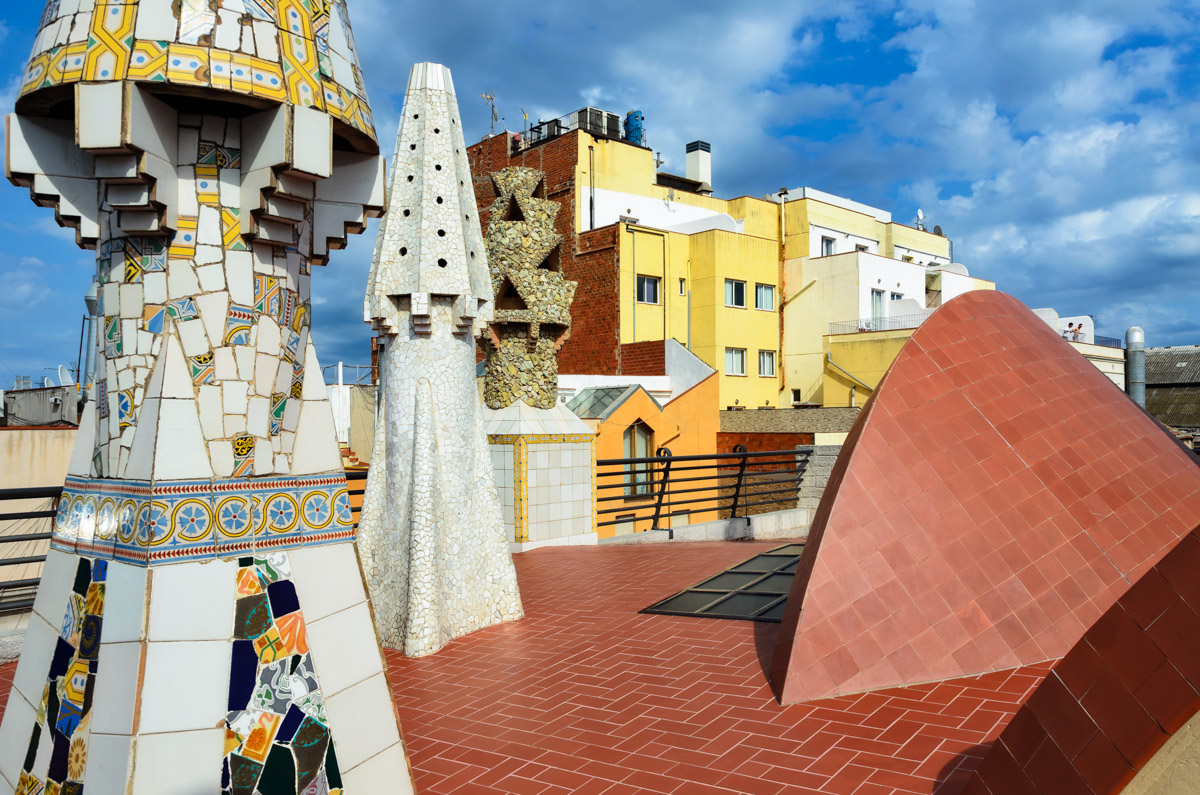 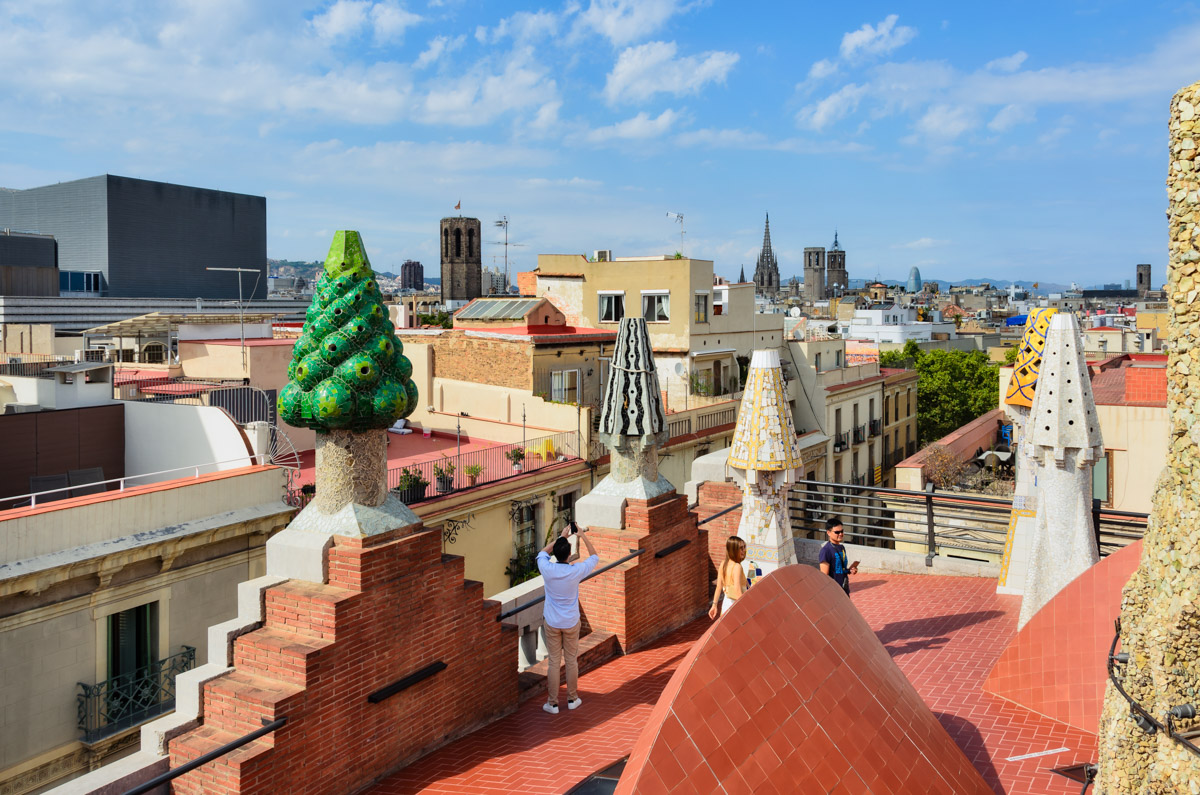 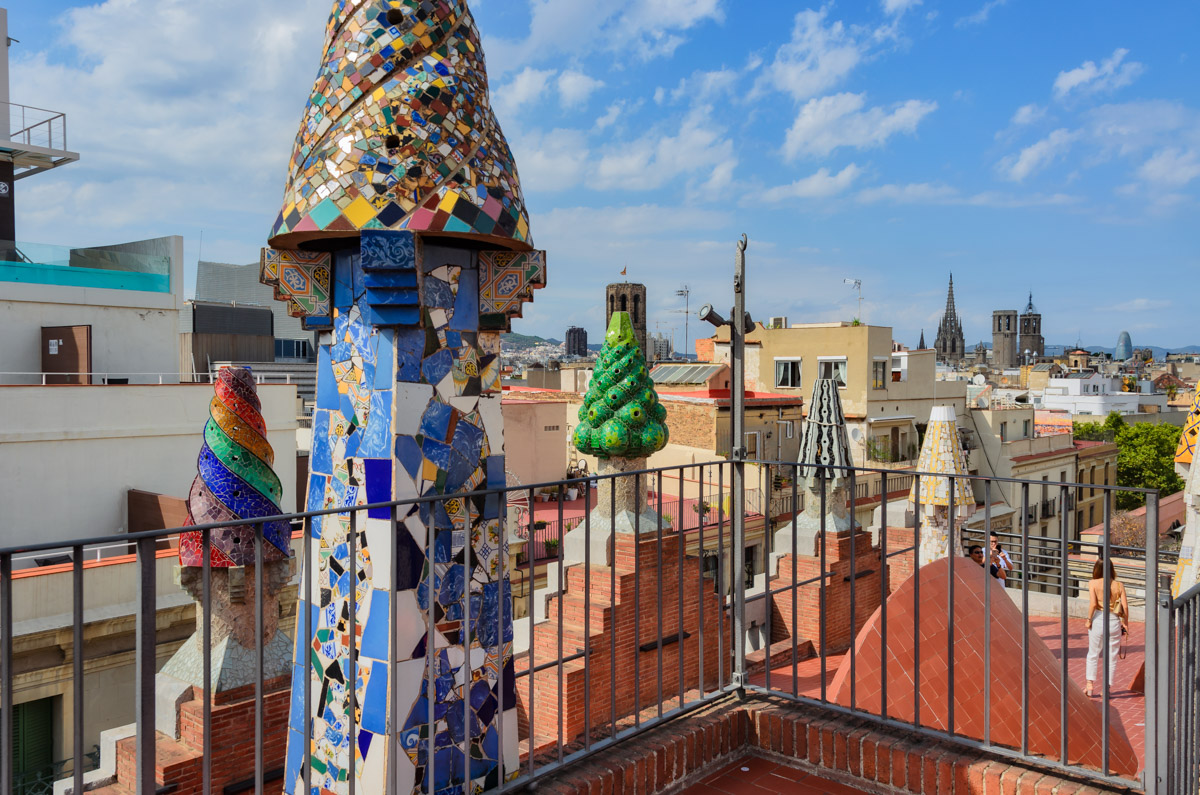 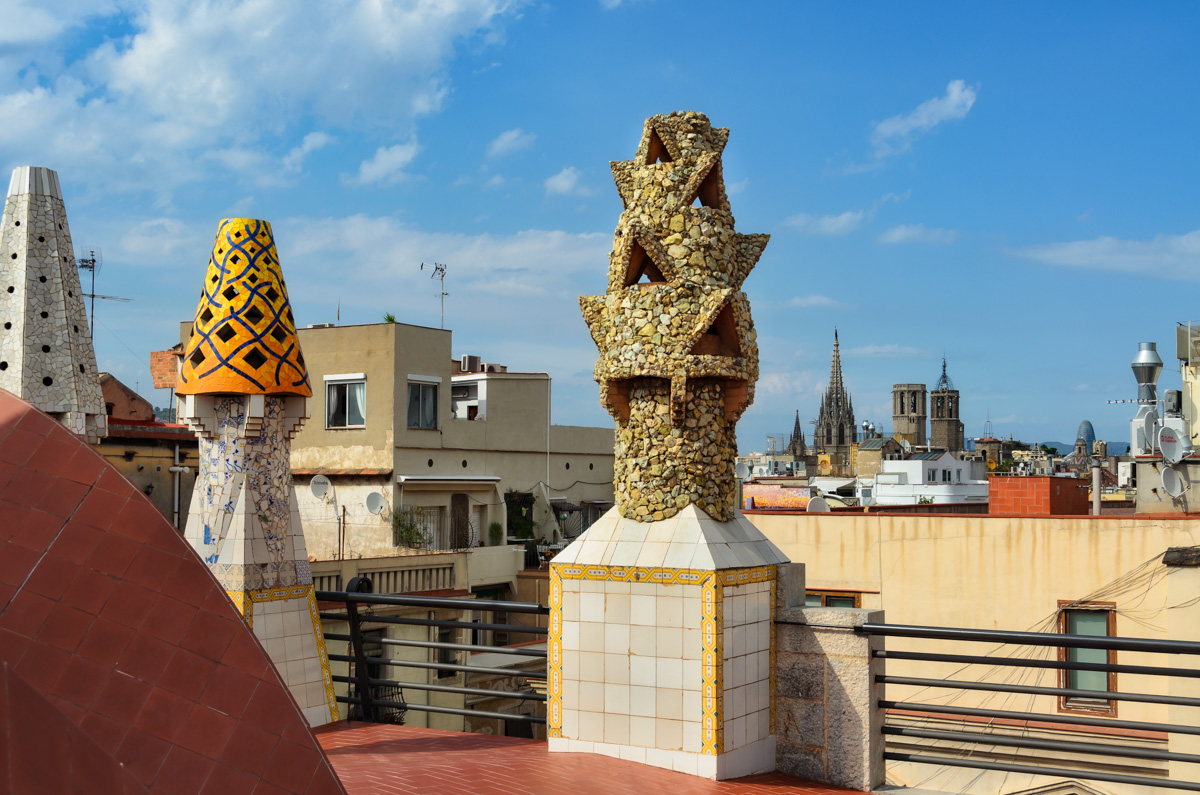 The views above are all in the direction of the Barcelona Cathedral. Here is an opposite view, towards Montjuïc and the Museum of Catalan Art. 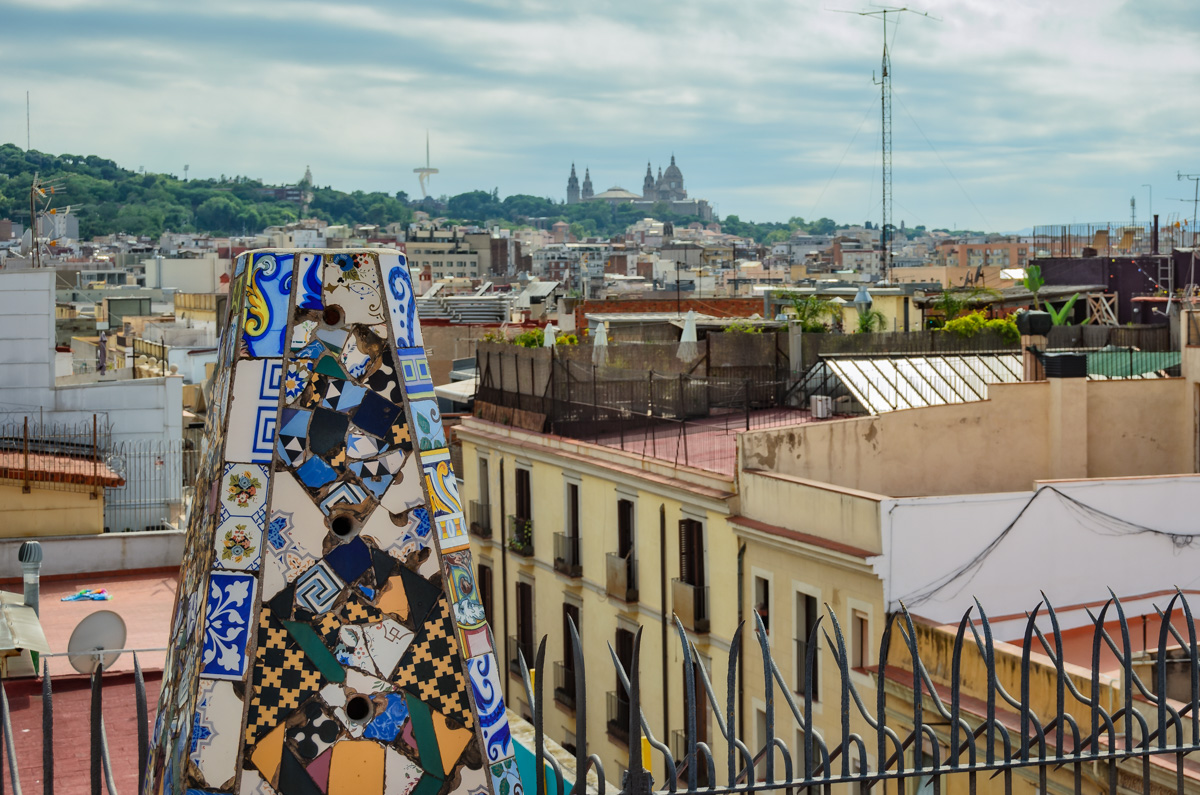 One more perspective, a close-up of the cathedral towers, with the distinctive tip of Torre Glòries in the background. 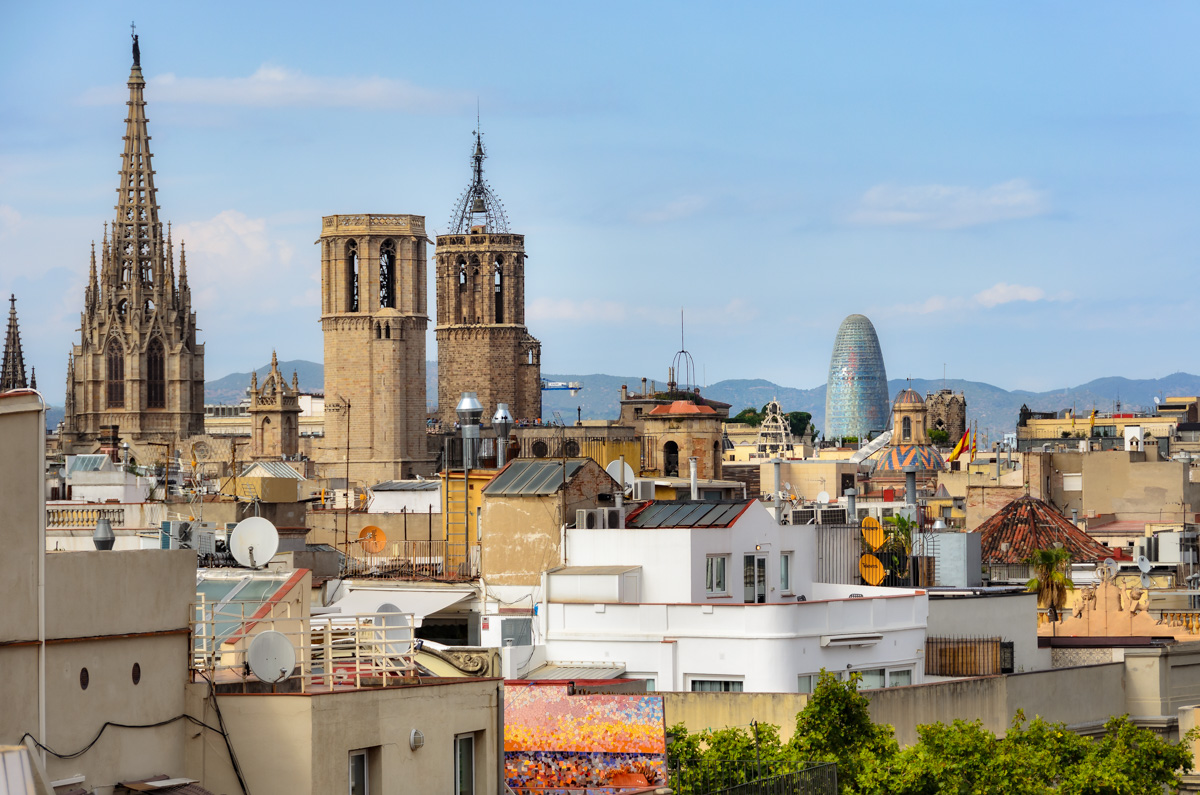 Overall, among all the riches of Barcelona, Palau Güell does not rise to must-see level for me. However, anyone interested in architecture in general and in Modernisme in particular would find the visit enjoyable.

These and other pictures can be found in my Flickr Barcelona album.