Albi, in the southern France region of Occitanie, is hailed on the World Heritage list as a complete ensemble of urban development dating from the Middle Ages. The height of town’s prosperity and importance falls on the later part of the 13th century, when a powerful local bishop built Palais de la Berbie and commissioned the construction of St Cecilia Cathedral. Albi’s architecture of that and subsequent periods is remarkably well-preserved.

Let’s start with the iconic sight of Albi – that of its magnificent cathedral. 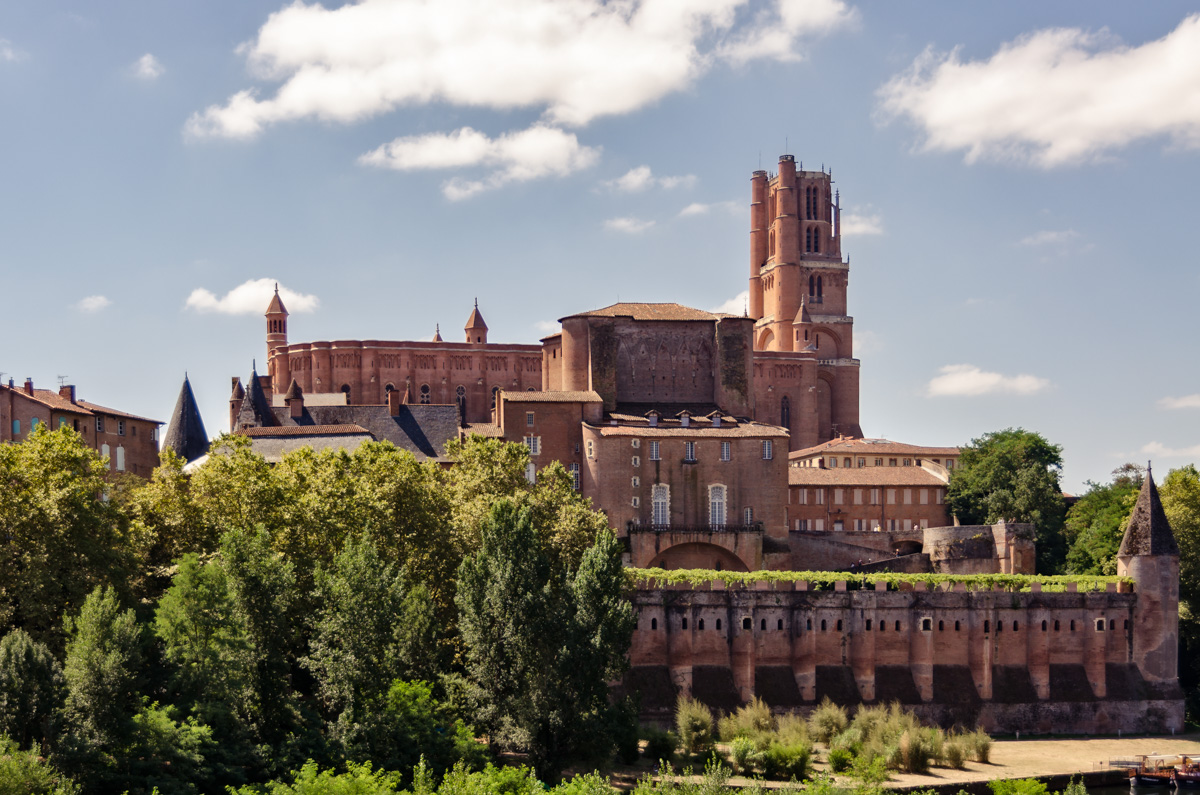 A wider view takes in the historic Pont Vieux over river Tarn. 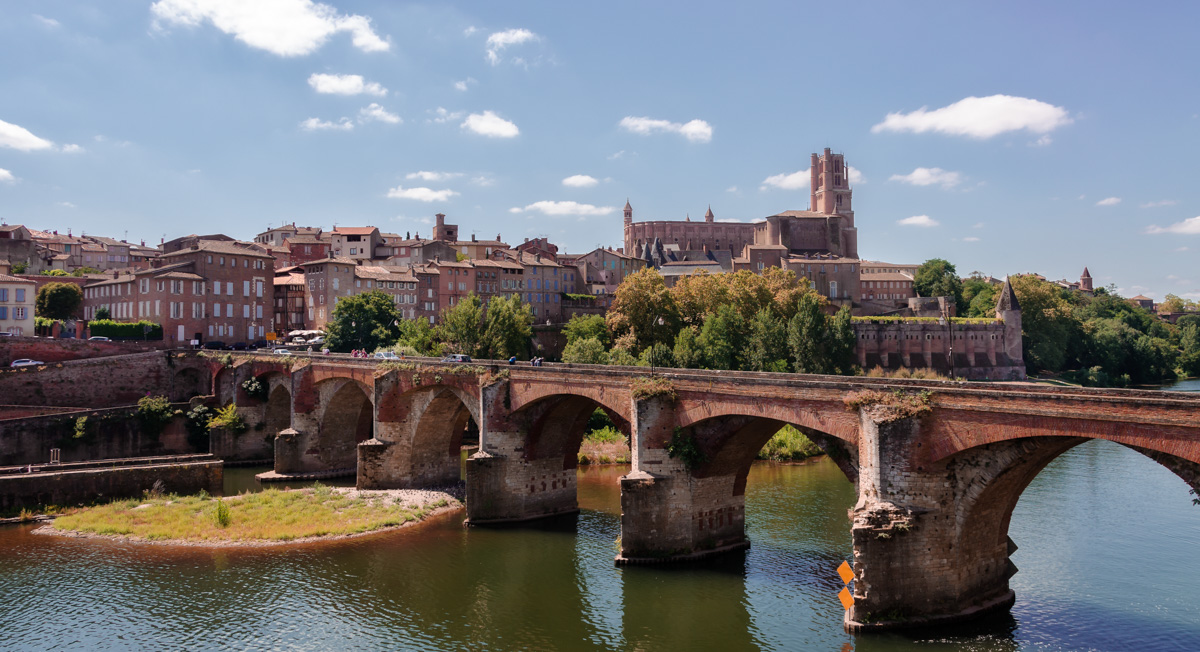 The construction of Basilique Cathédrale Sainte-Cécile was completed in the 15th century. It stakes a claim to being the largest brick building in the world. A quick search of the web suggests that the claim may be suspect, but it makes the cathedral no less stunning. 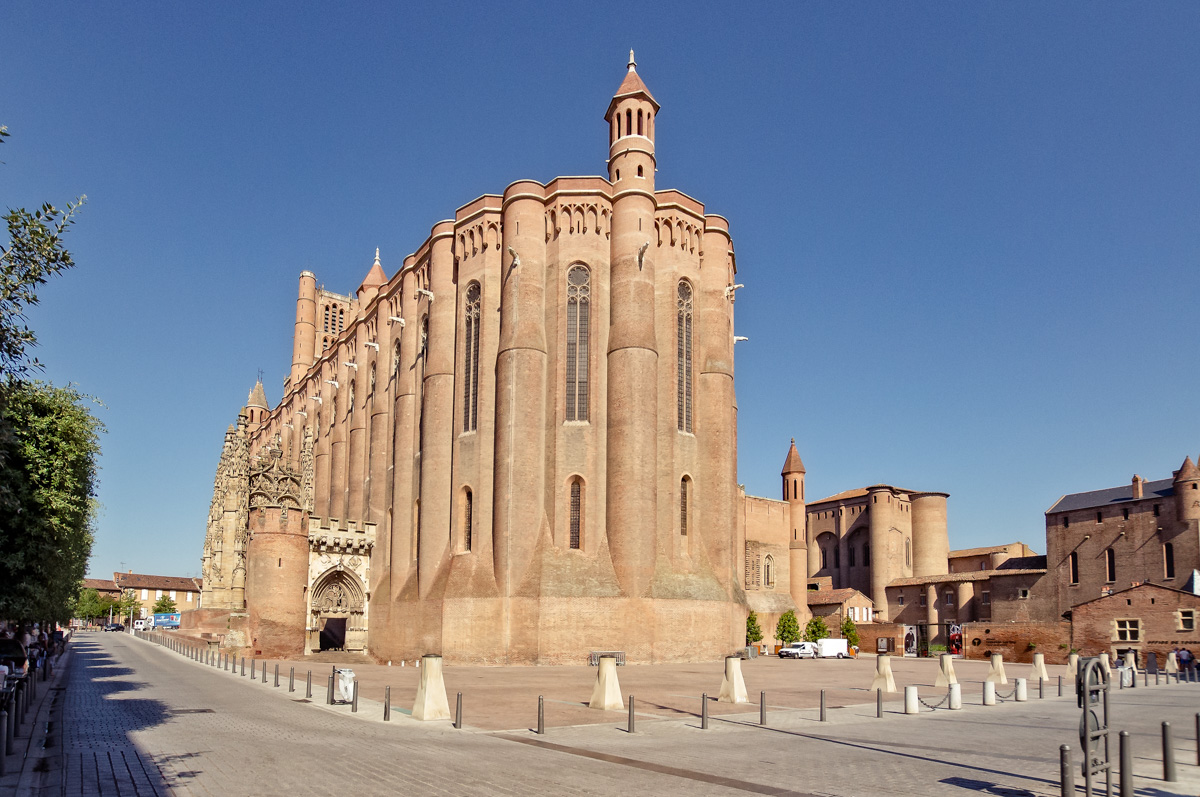 A fragment of the intricate south porch added to the cathedral at the end of the 14th century. 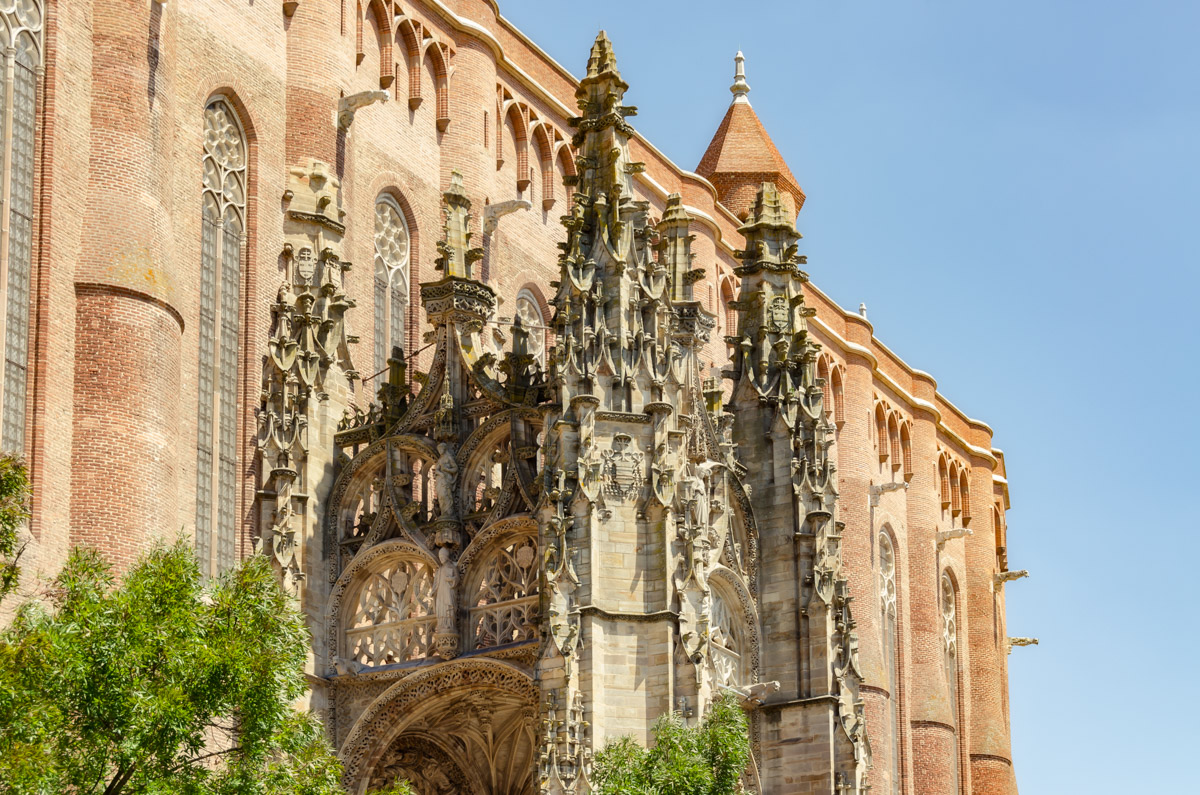 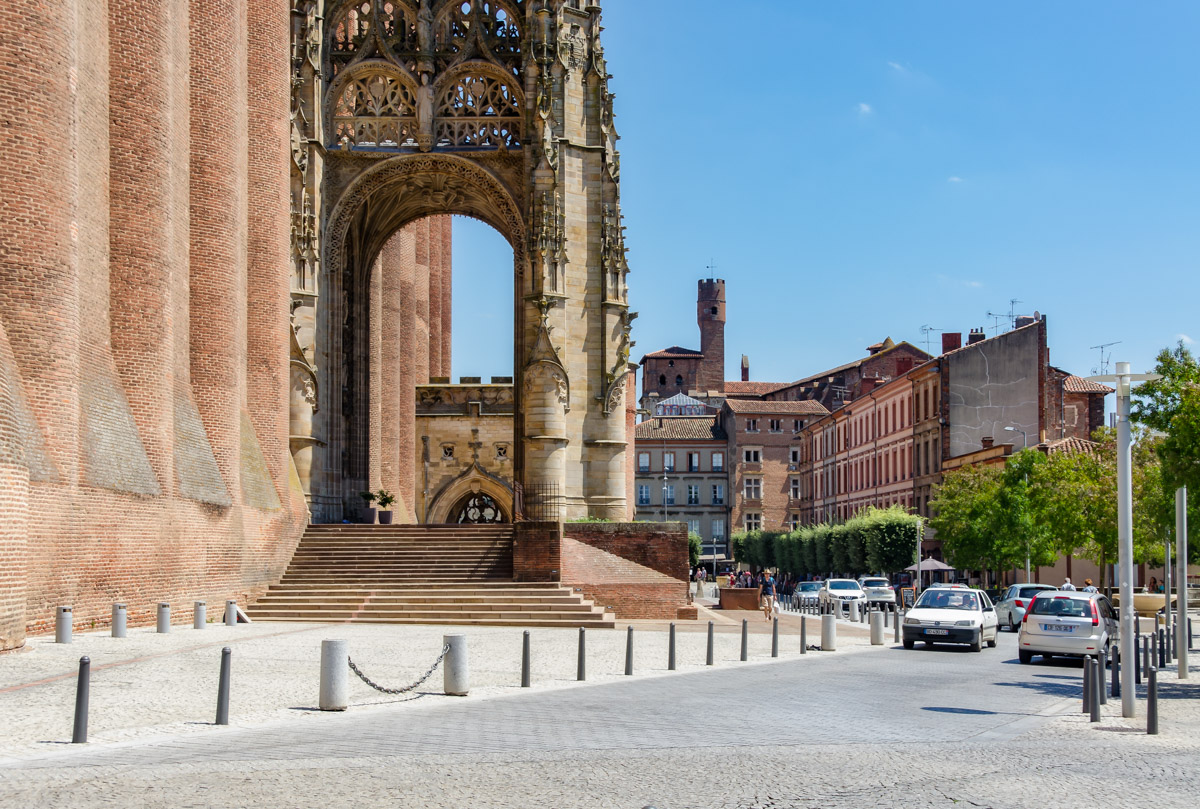 In fact, I think the cathedral is worth the visit to Albi all by itself. Its painted interior is among the most spectacular that I’ve seen on my travels. The audio guide narration states that the frescoes have so far required no restoration in the 500+ years, and while hard to believe, that fact certainly adds to the jaw-dropping impression. 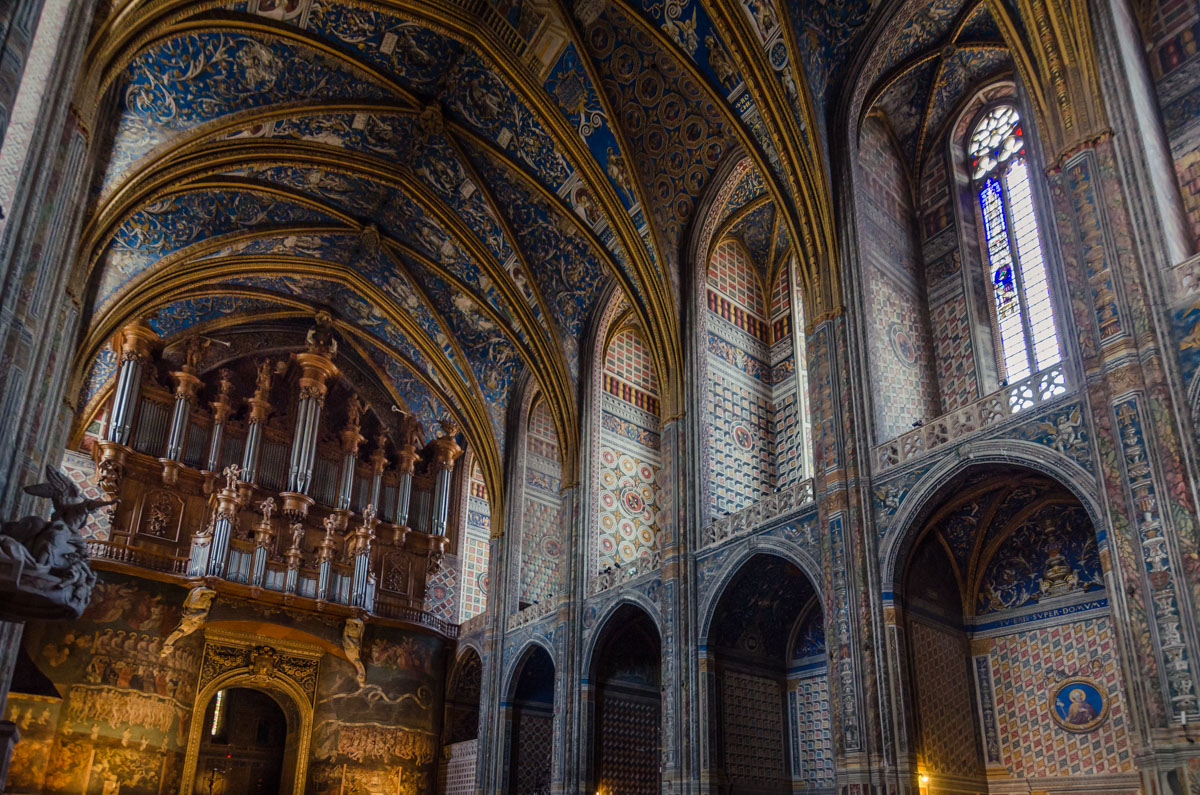 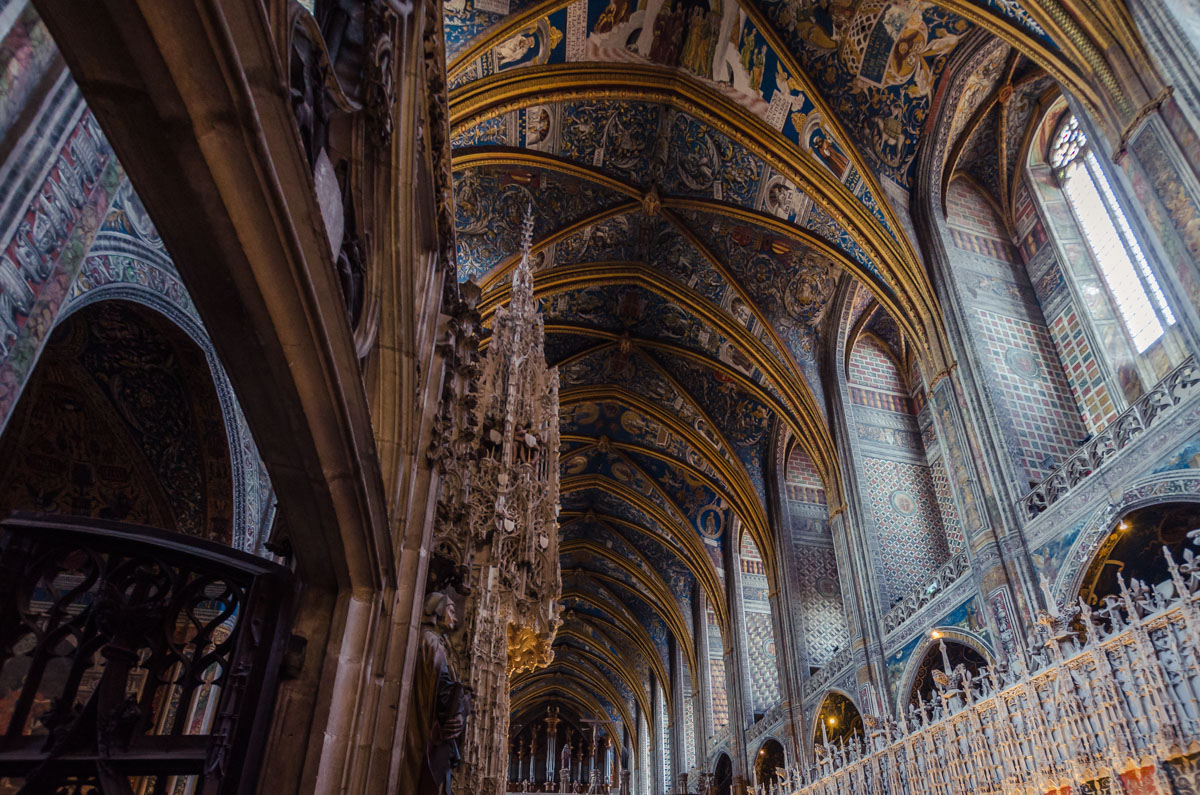 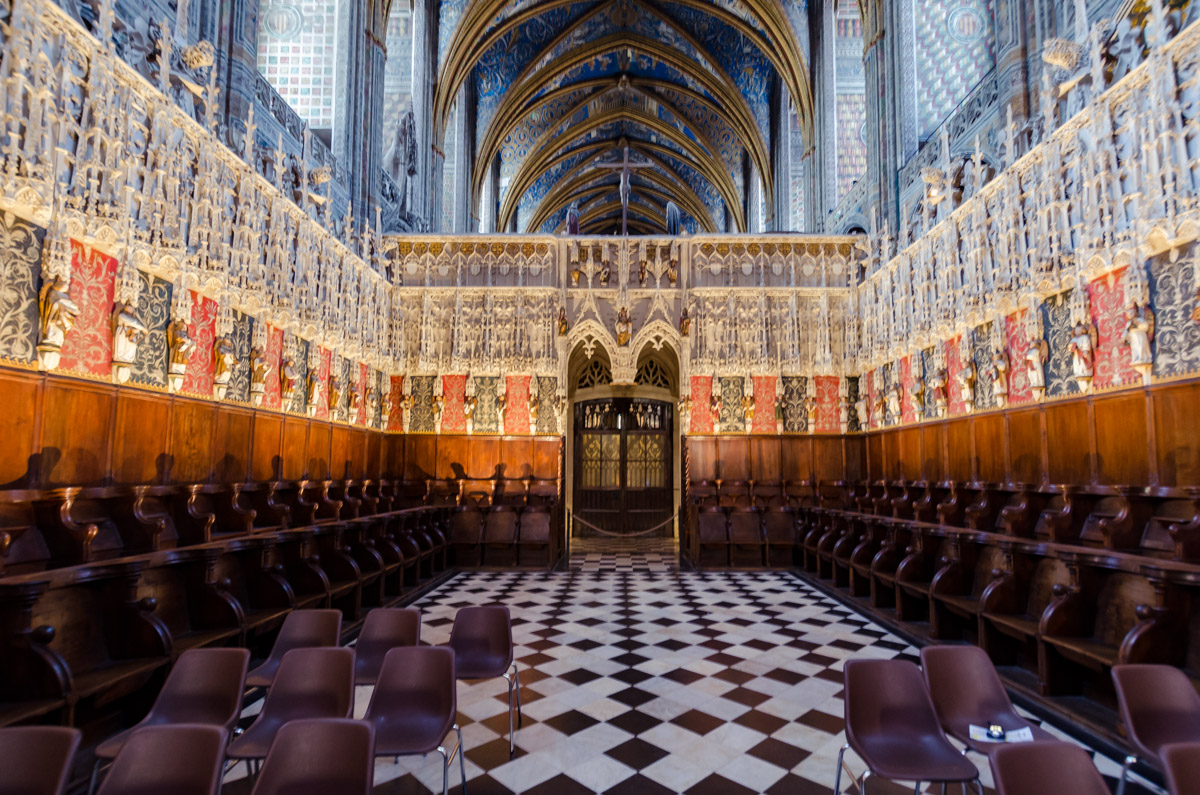 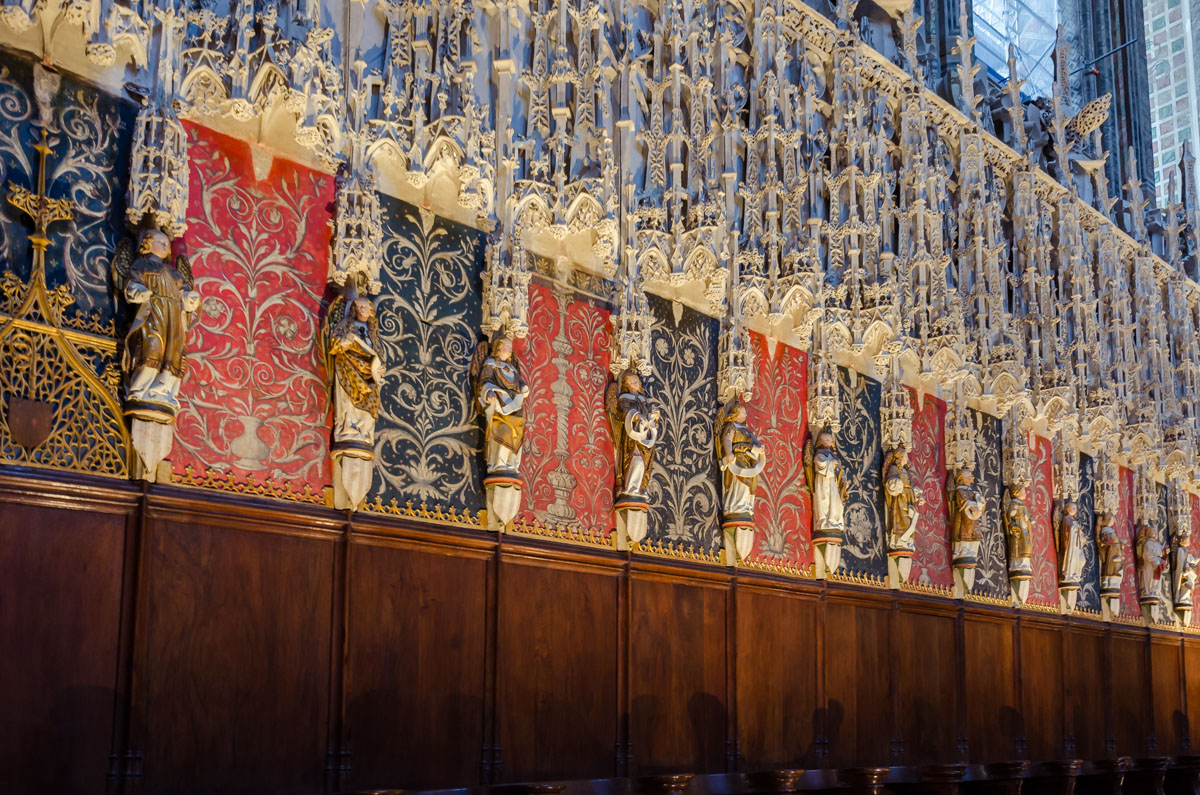 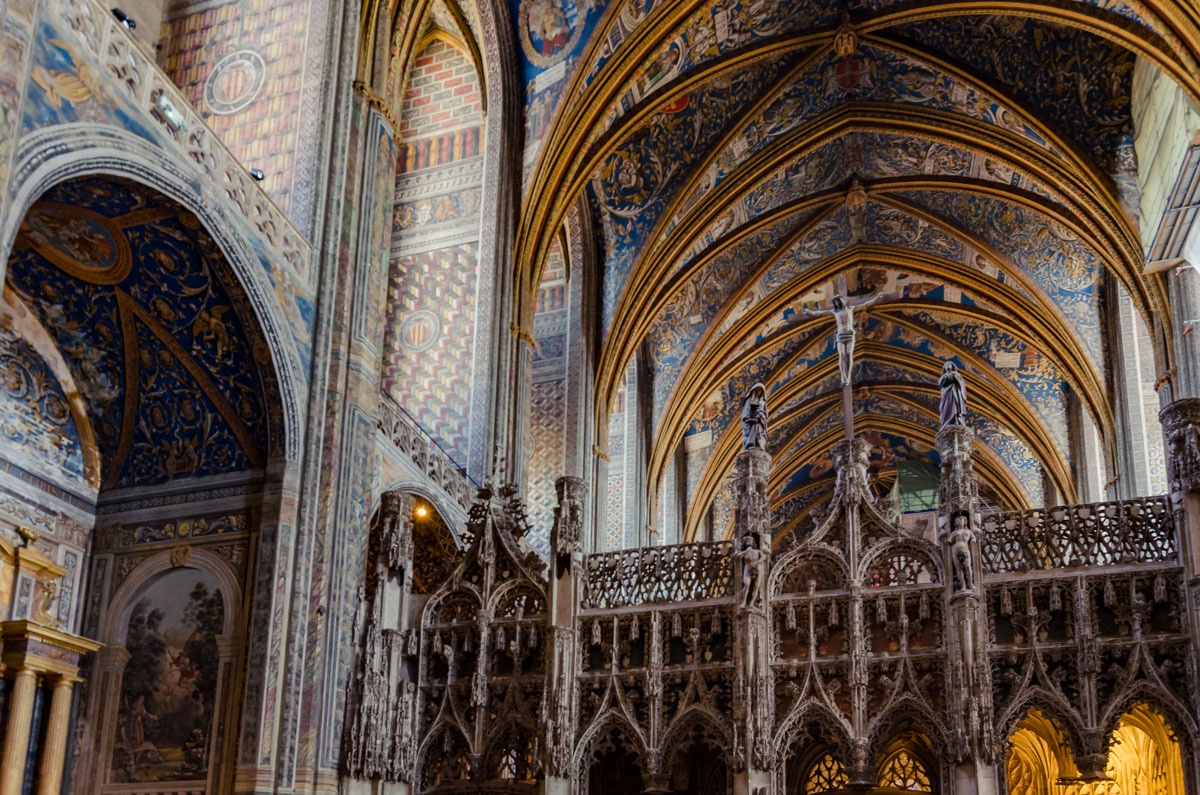 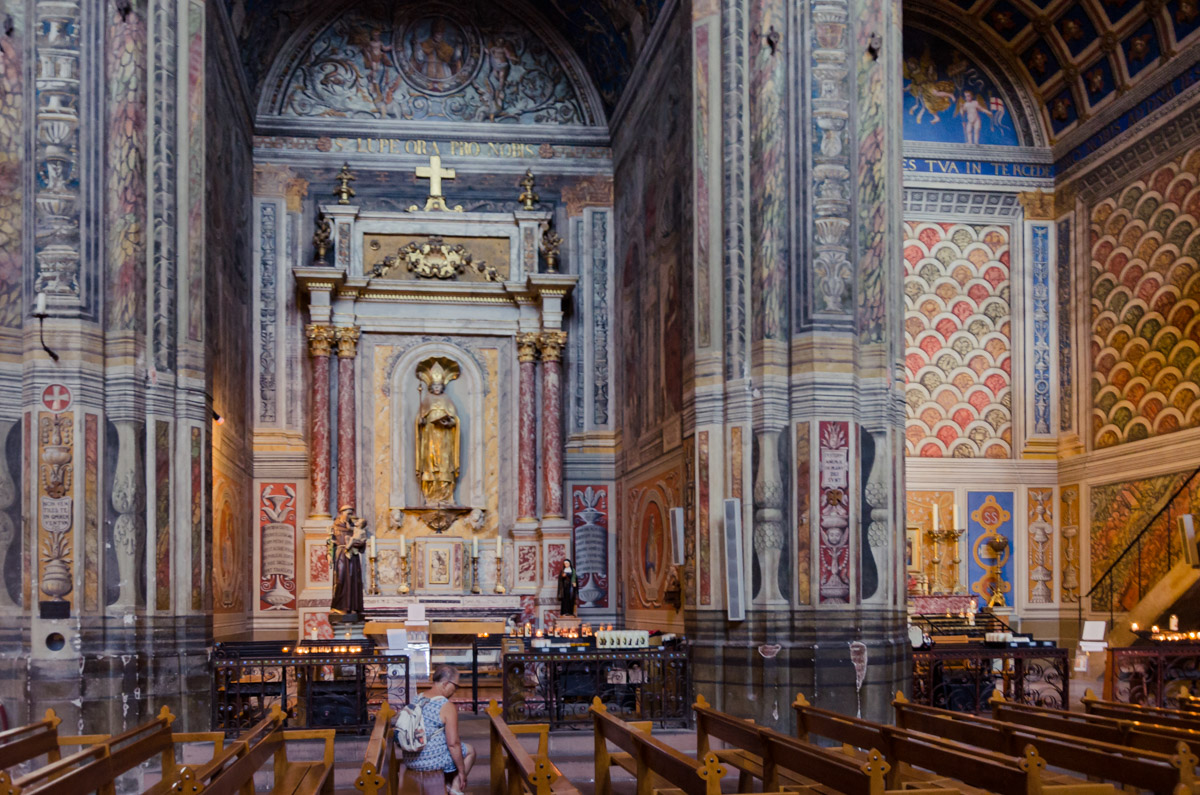 Next to the cathedral in Palais de la Berbie, the residence of the bishops of Albi. 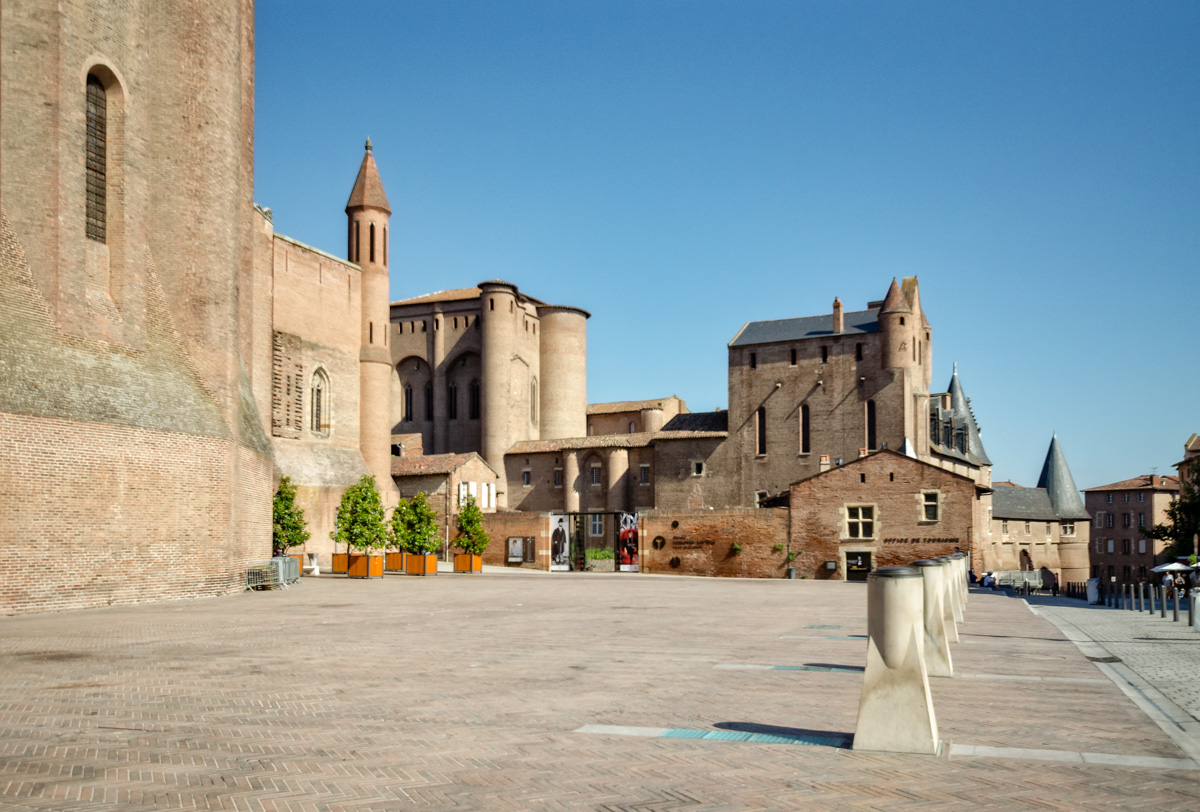 Nowadays it houses an excellent museum of the works of the favorite local son Henri de Toulouse-Lautrec. Only a couple of rooms of the museum suggest former extravagance of the interior, such as this painted ceiling. 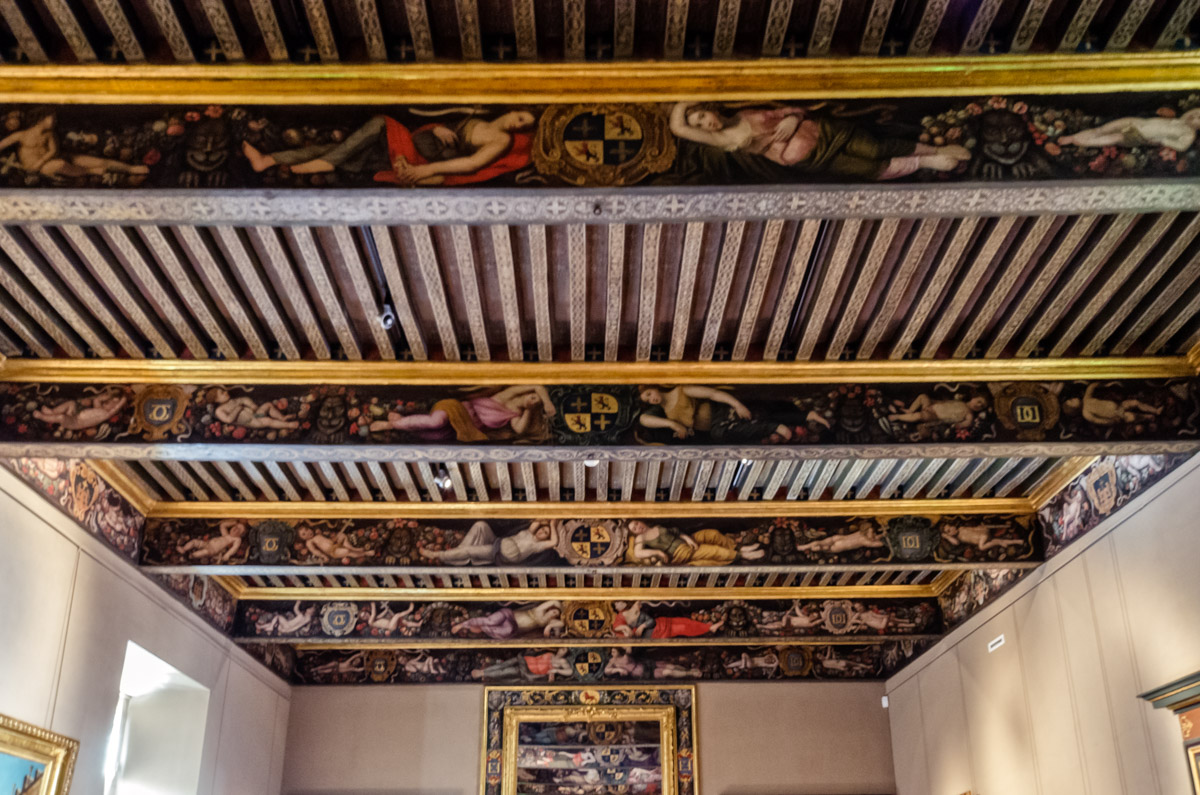 Berbie Garden is a burst of color within the reddish brick confines. 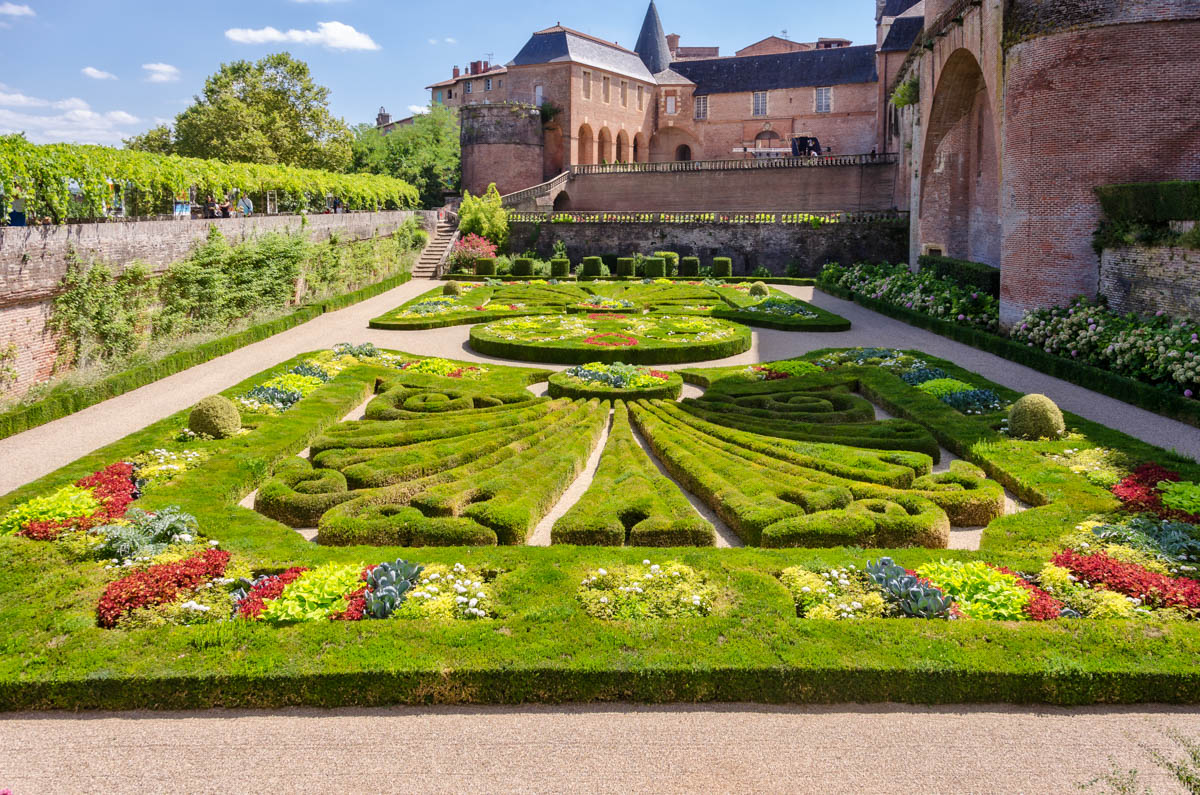 From the garden gallery, the best views of the opposite bank of Tarn, dominated by Église de la Madeleine. 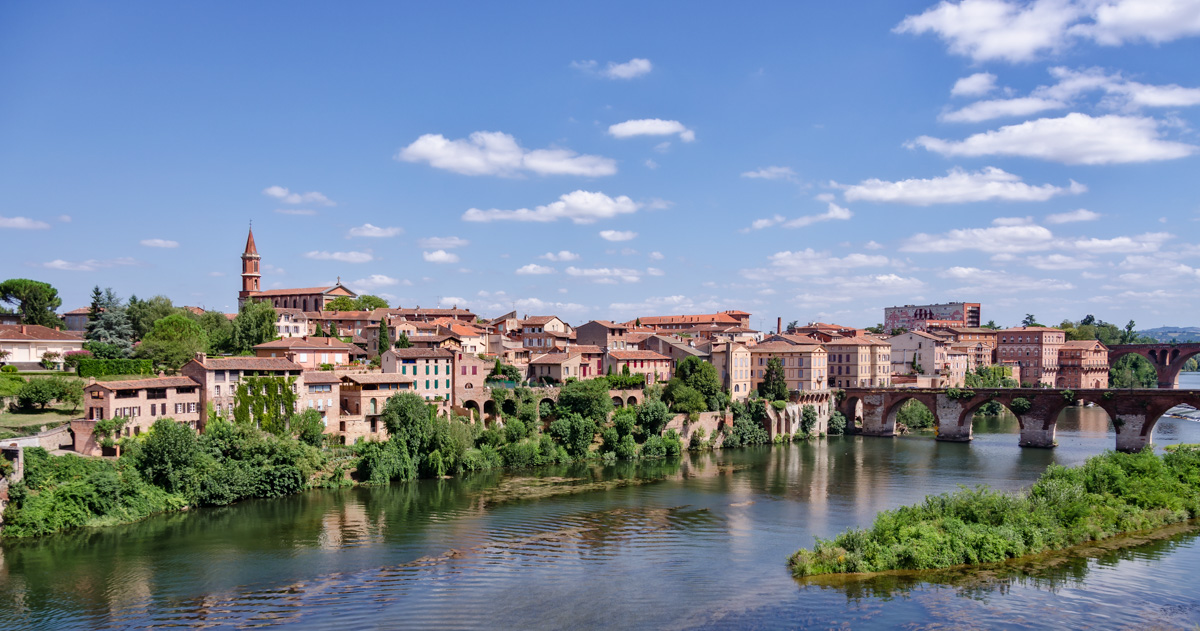 Close up of Pont Vieux. 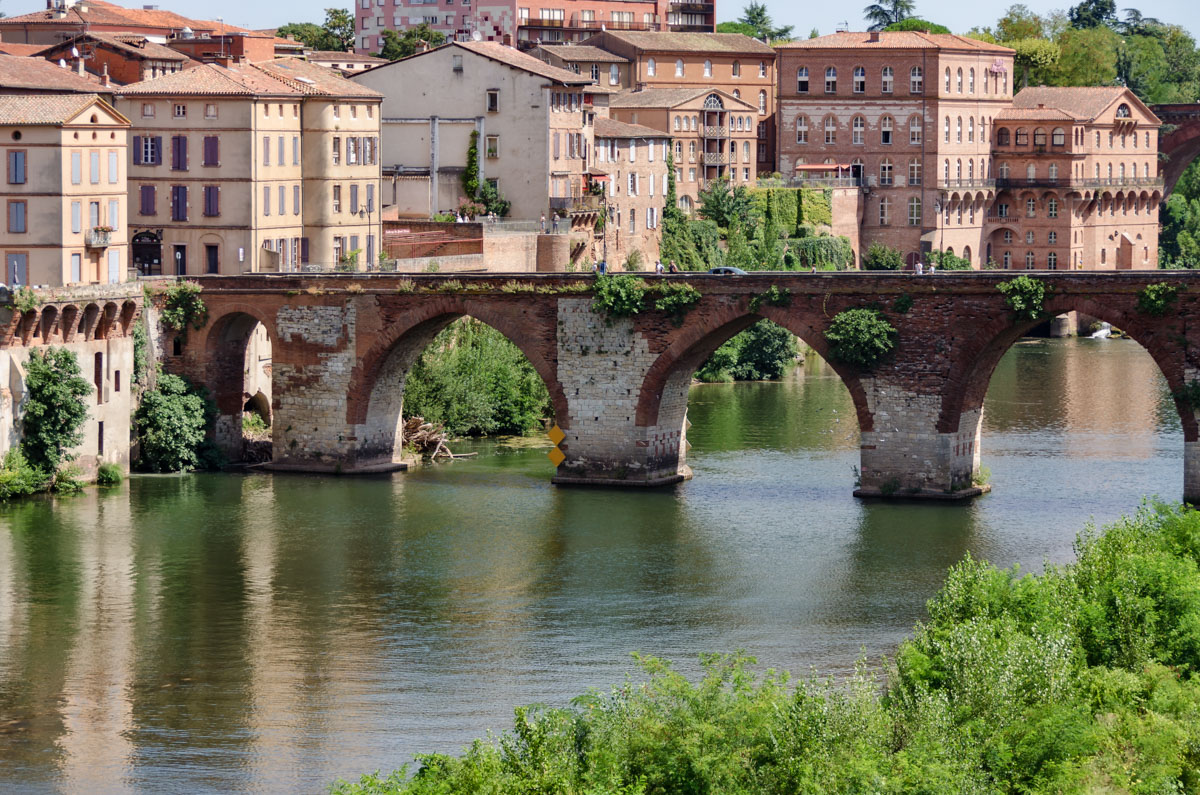 It is nearly a thousand years old but remains in everyday use.

Perspective along the bridge towards the historic center. 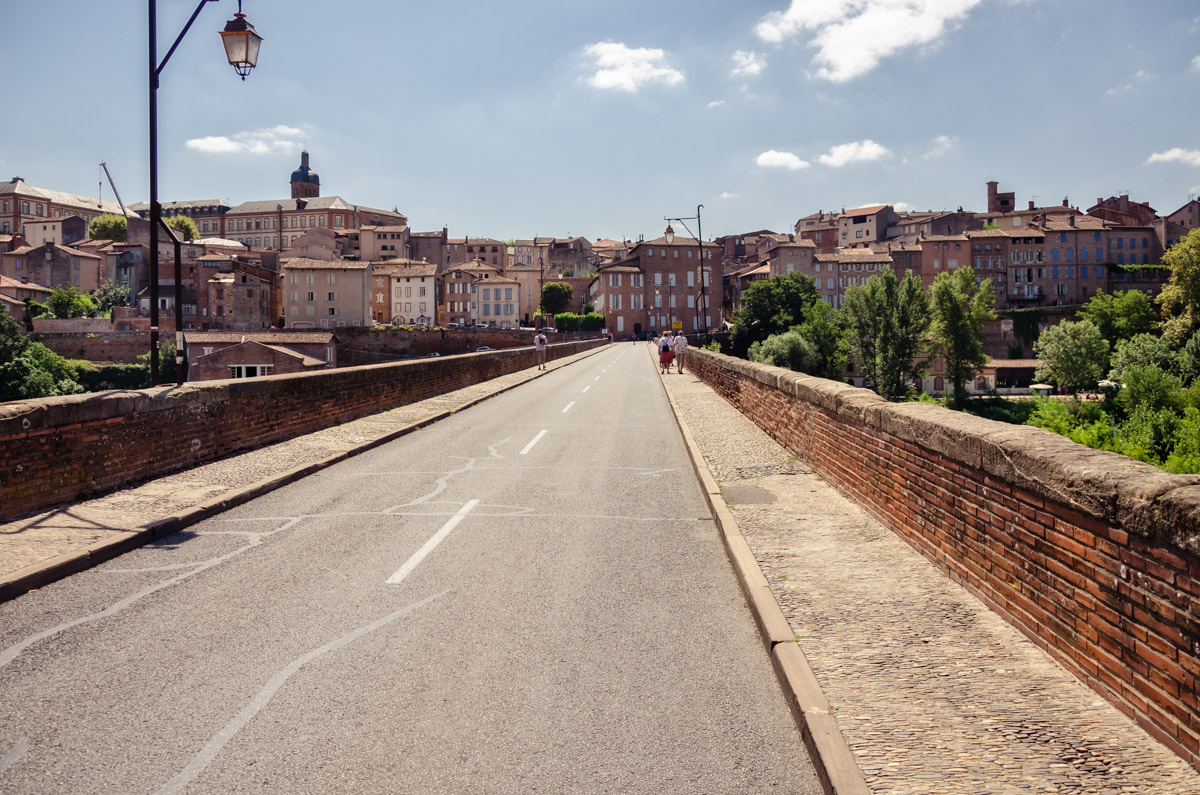 Red brick Languedoc-style architecture is the defining feature of Albi streets. Some houses expose timber frames but very few have balconies or façade decorations. The visuals straddle the boundary between captivating and unexceptional. 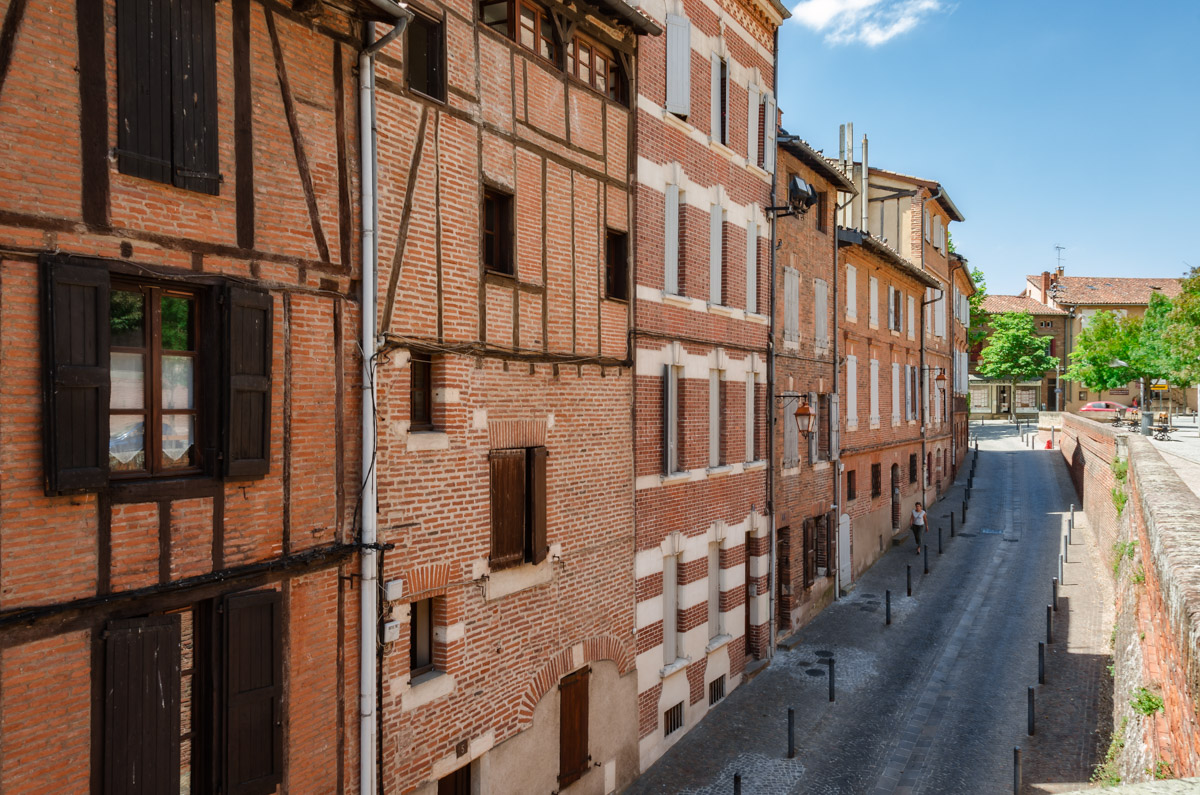 The town converges on the cathedral, so several streets in different directions offer a perspective of this kind. 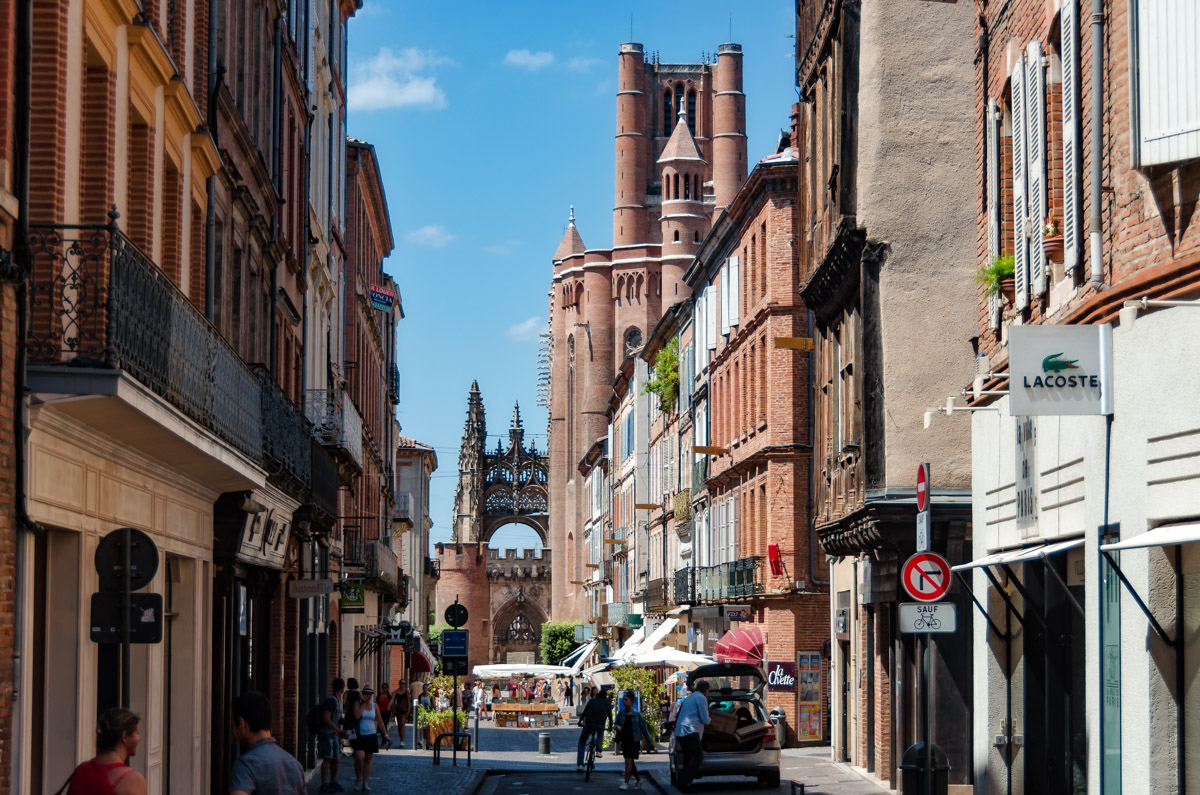 As befits a medieval town, the central streets are mostly off-limits to motorized traffic. Some are completely taken over by the restaurant tables. 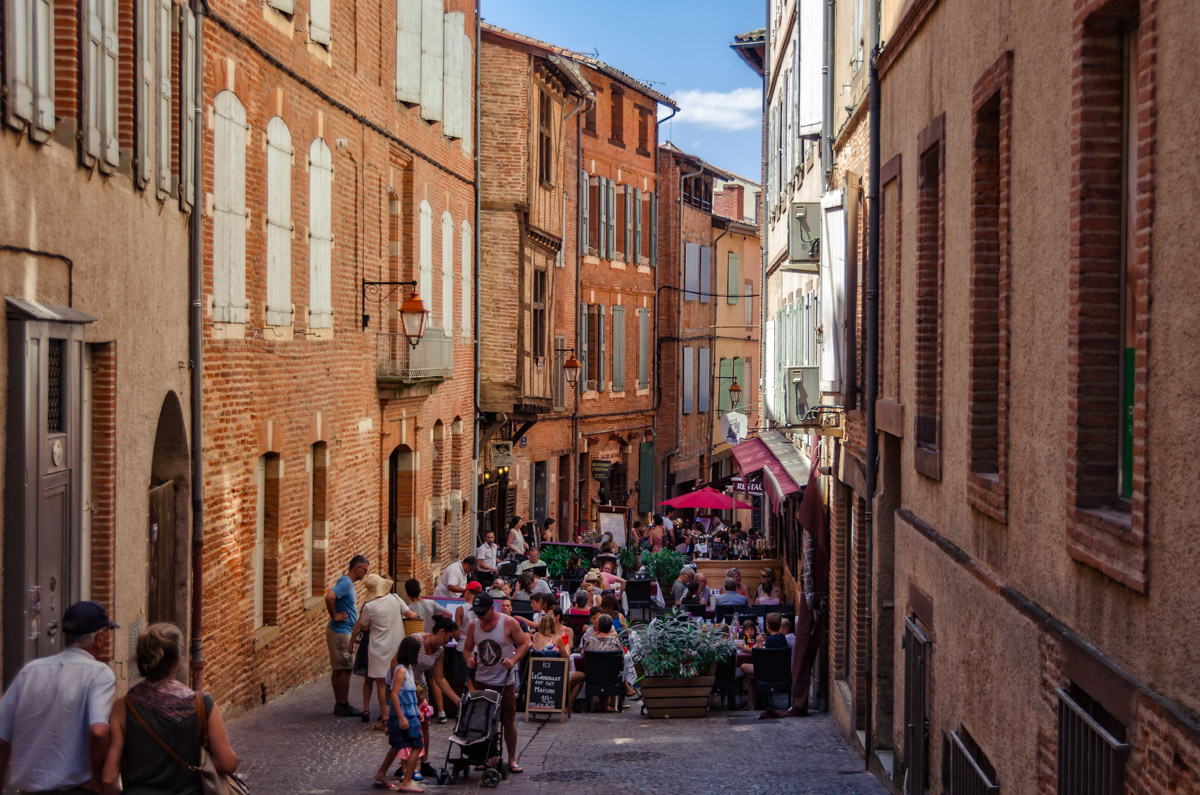 The core town area is fairly compact but most of the visitors to the town cluster around a few key points of interest. I did not have to step too far to find streets that, owing to the relative absence of commercial establishments or must-see sights, looked pretty deserted even on a high-season summer day. I frequently photoshop offending pedestrians out of the urban landscapes, but none of the following few shots required that. 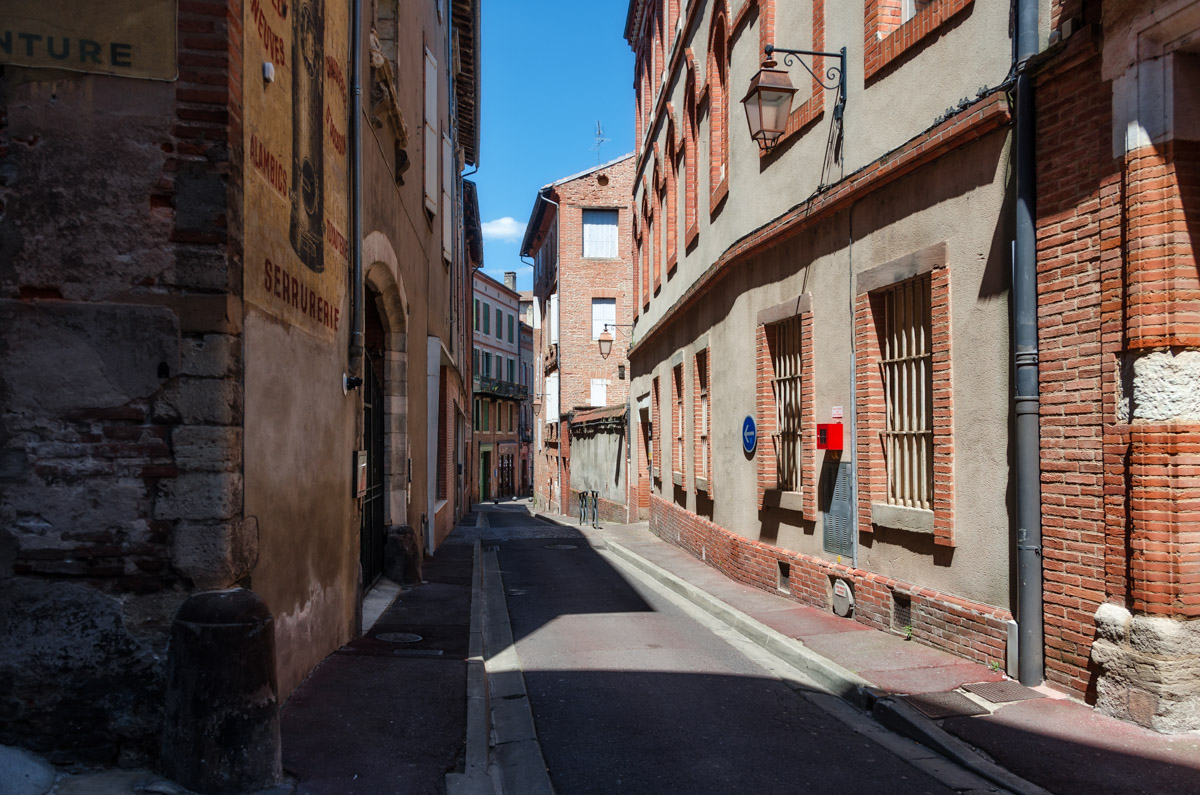 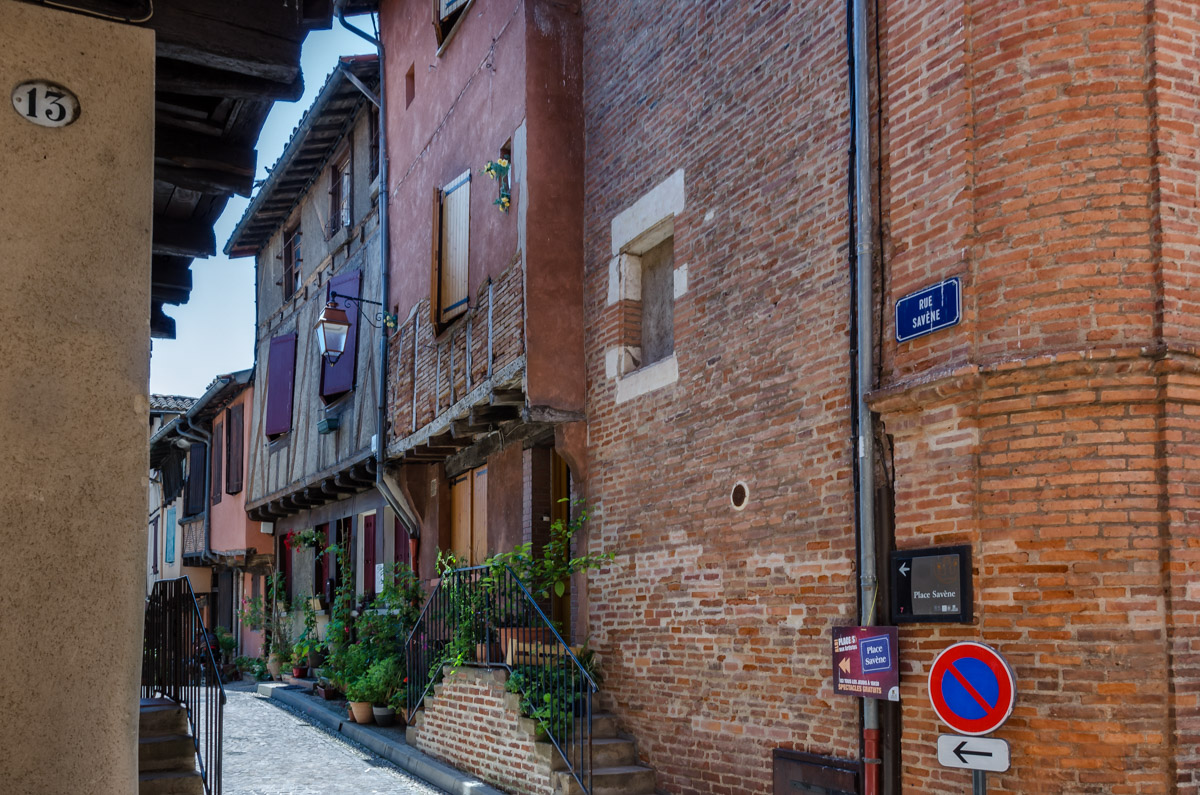 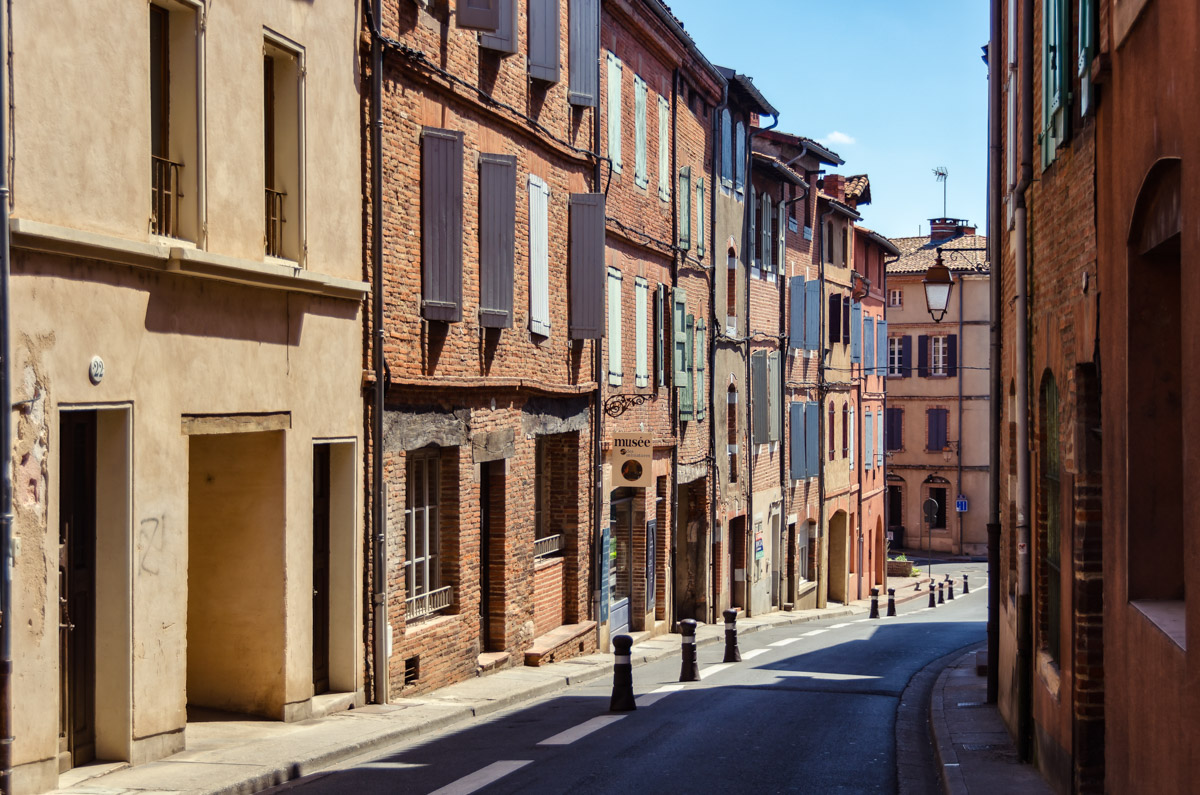 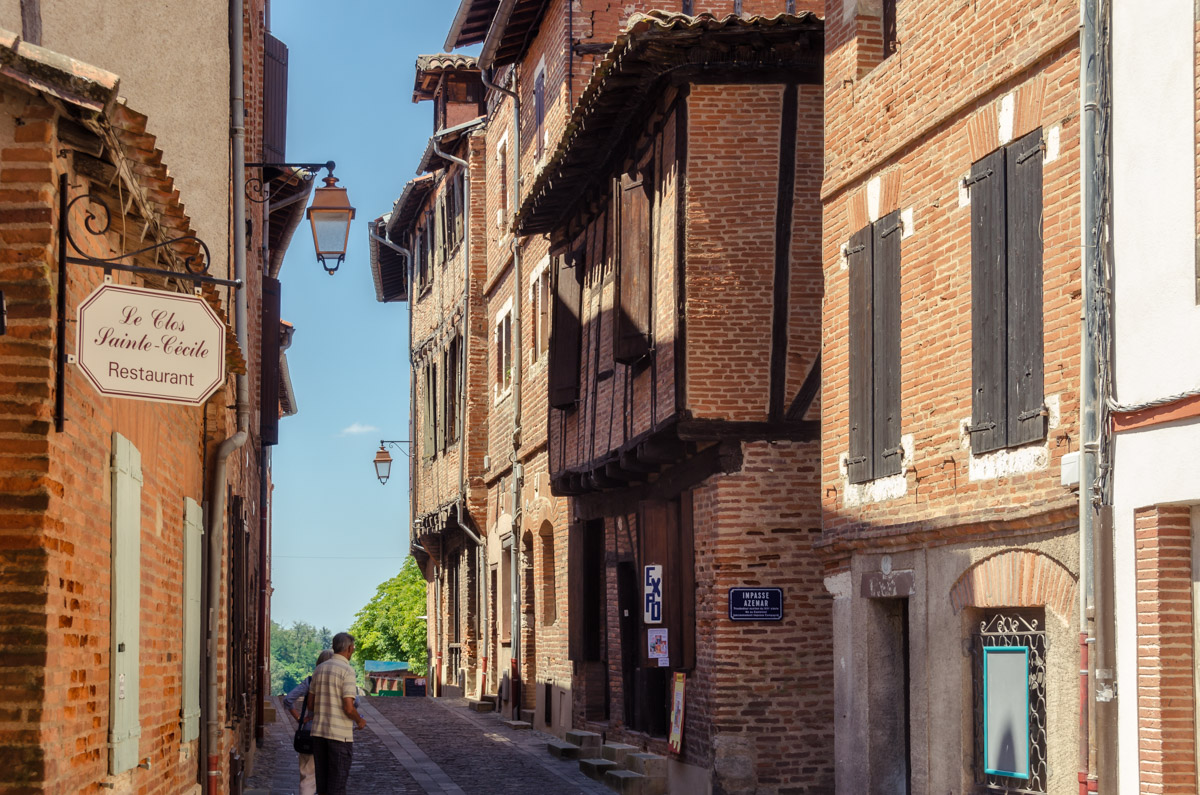 Well, maybe a hot Friday afternoon in August is supposed to be comparatively deserted. This is a more commercialized part of the city center, only a block or two away from the cathedral square. 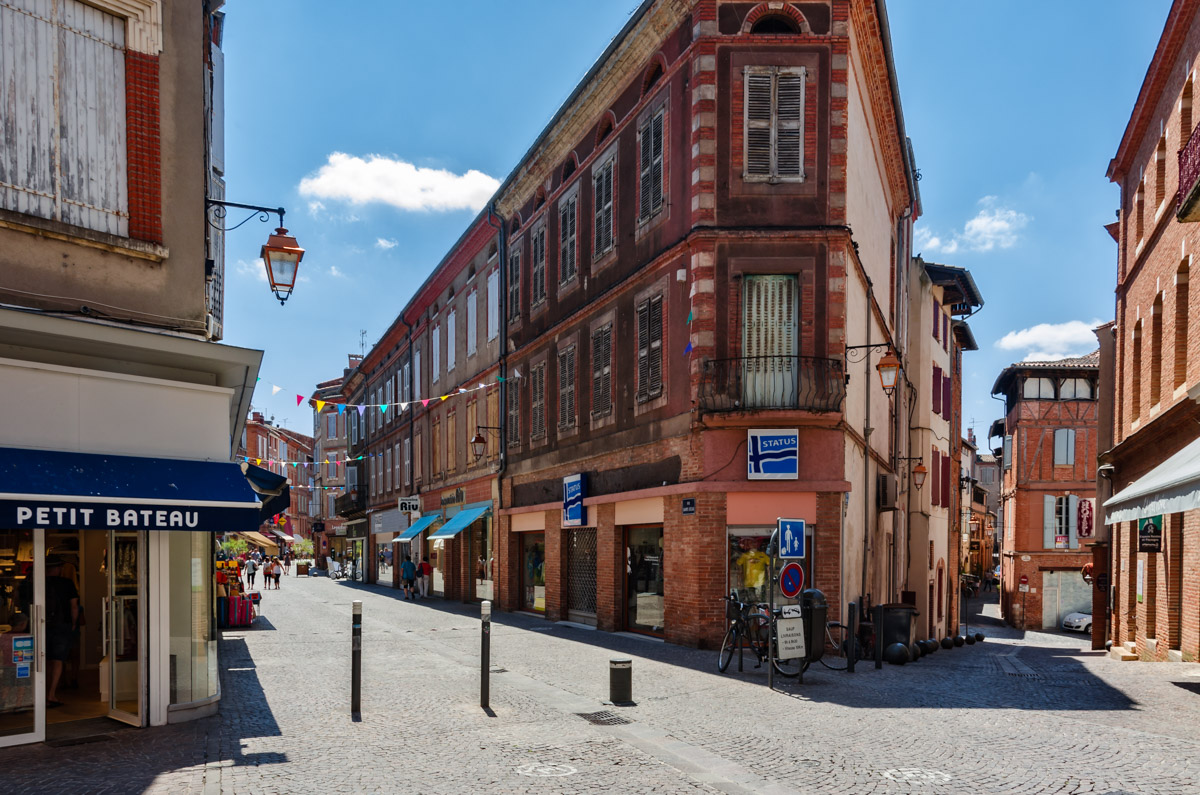 The entrance of the covered market, at just over a hundred years old one of the youngest buildings in the center of Albi. 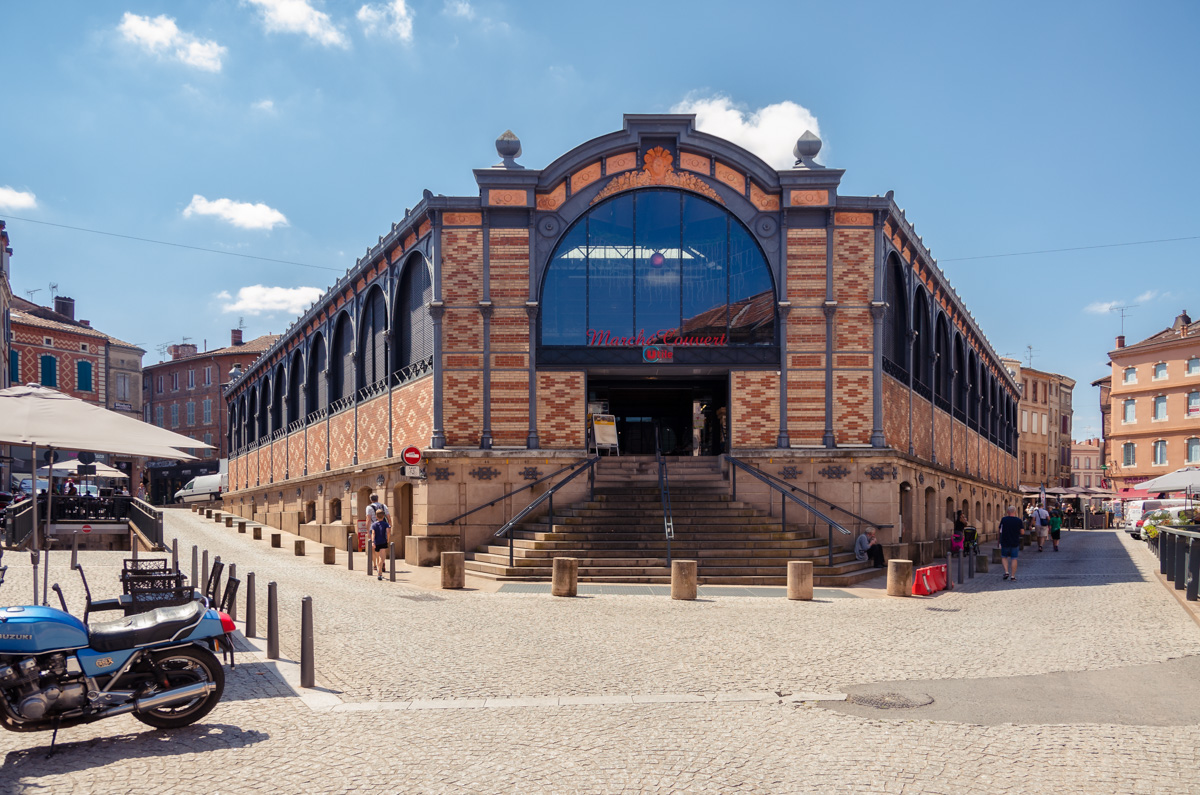 Albi can support a full day of sightseeing if you do full justice to its main attractions (the cathedral and the Musée Toulouse-Lautrec) and add one or two secondary ones. It is located about 40 minutes (75 km) driving from Toulouse; Montpellier (~200km, including a significant portion on local roads) and Bordeaux (~300km, all freeway) are at the edges of day-trip possibilities.

These and other photos from Albi can be found in my Flickr gallery.