The tiny walled town of Villefranche-de-Conflent dates from the 11th century and, owing to its strategic position in the Catalan region of Conflent, changed hands between France and Spain a number of times in its long history. In the second half of the 17th century, French Marshal Sébastien Le Prestre de Vauban undertook an extensive program of upgrading fortifications around French borders, and Villefranche-de-Conflent is one of the dozen of best examples of Vauban’s contribution to the military architecture.

The town is also really pretty, with a place on the register of Le Plus Beaux Villages de France.

These are the town walls. 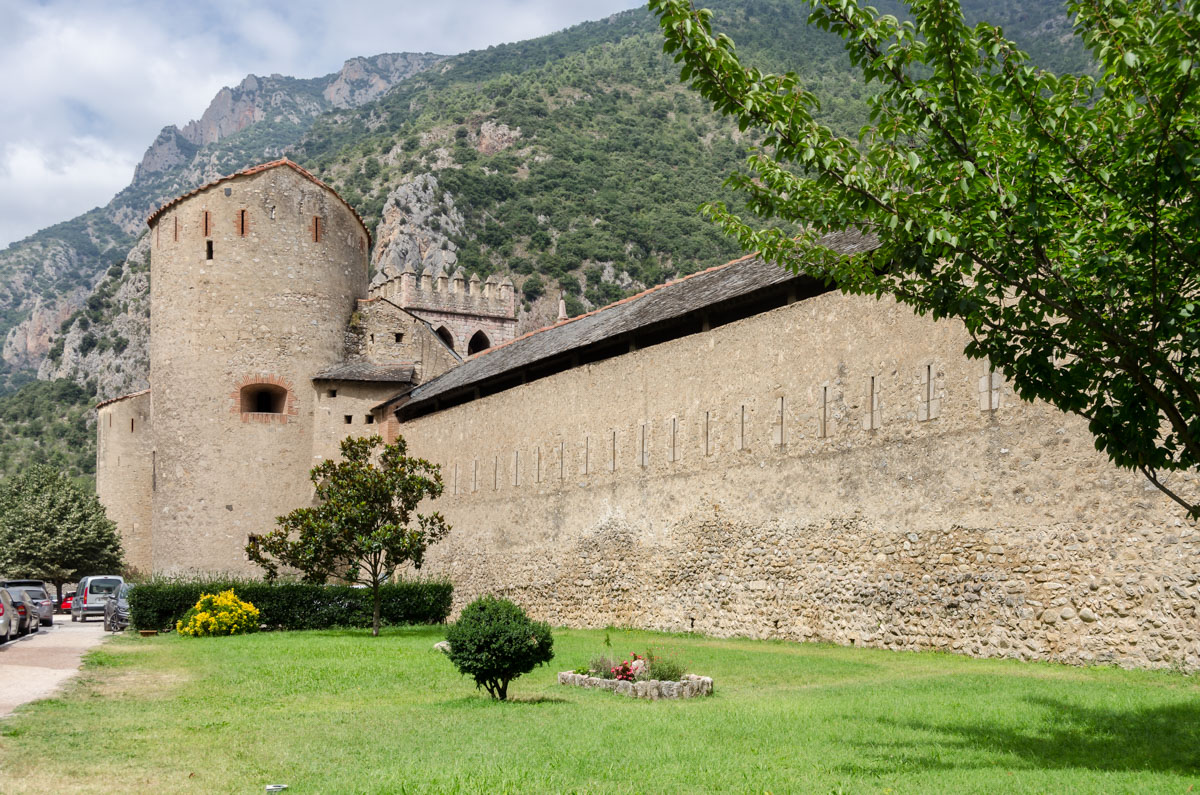 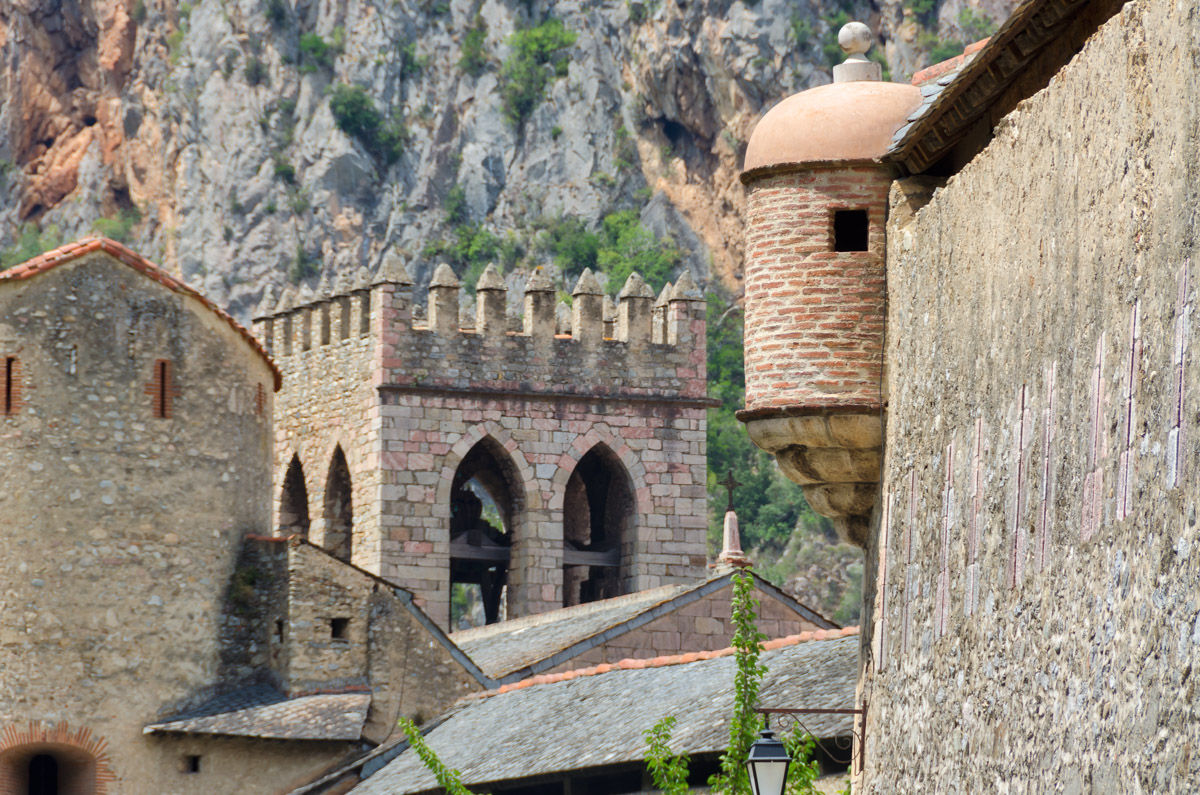 Inside the walled perimeter, the town is literally two streets and one square. Here is a fragment of the square, Place de l’Église. 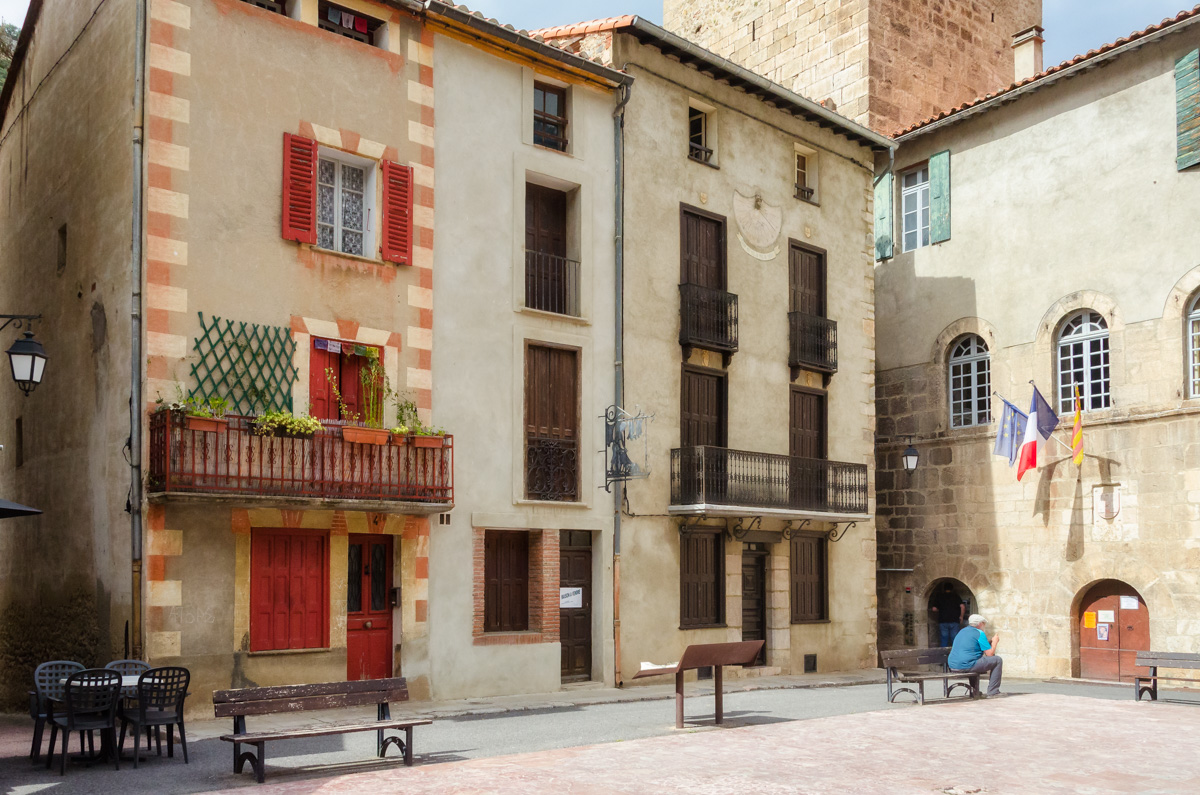 A couple of opposite perspectives along Rue Saint-Jean. 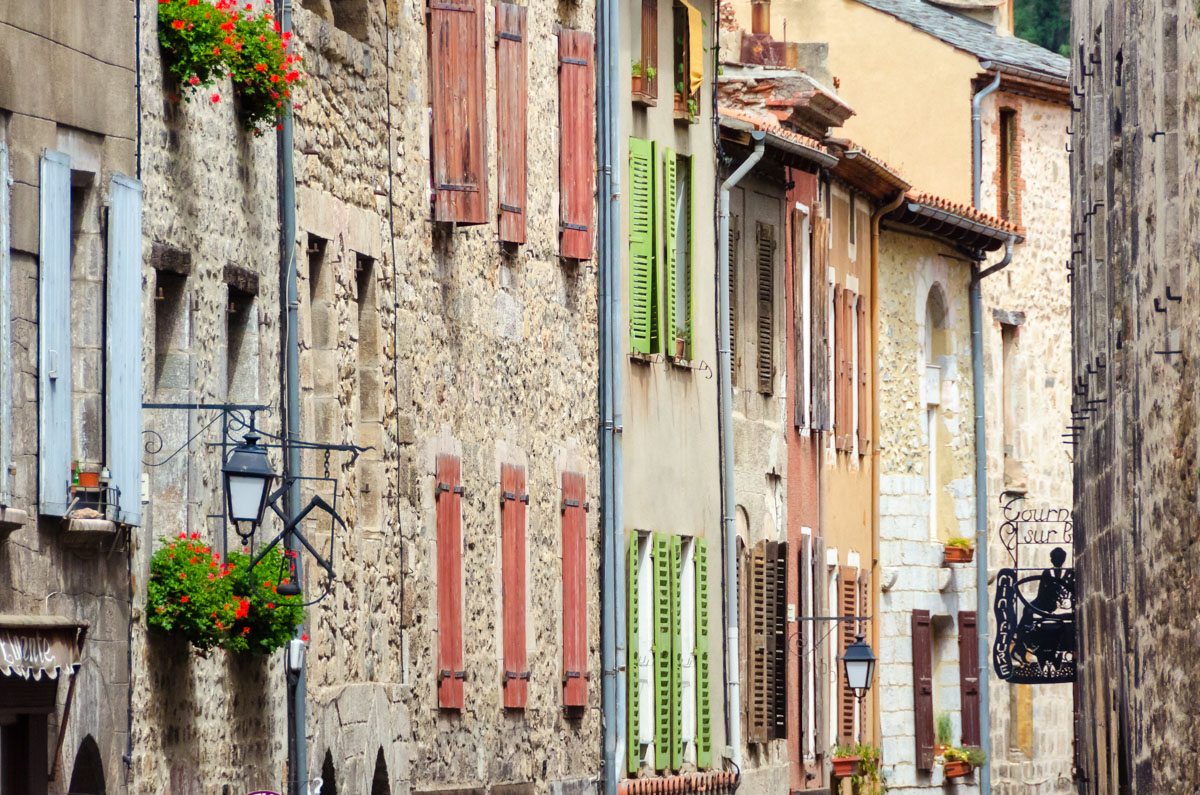 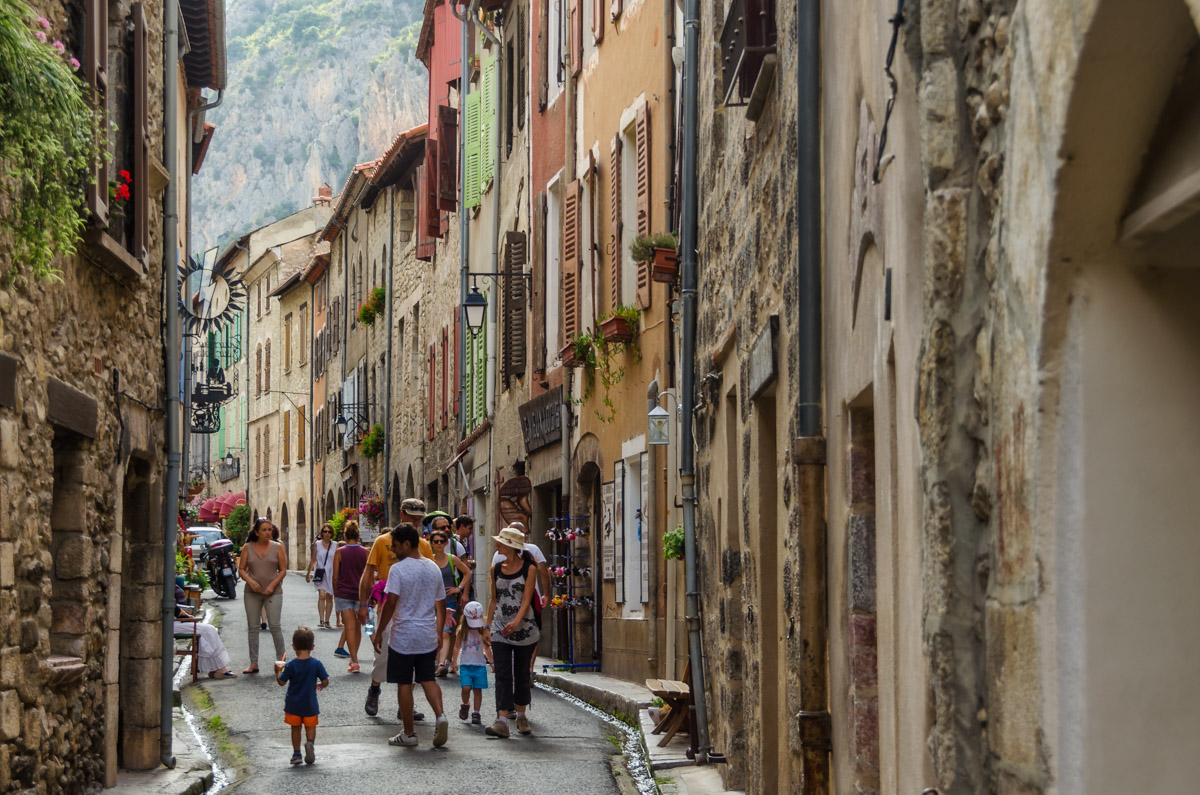 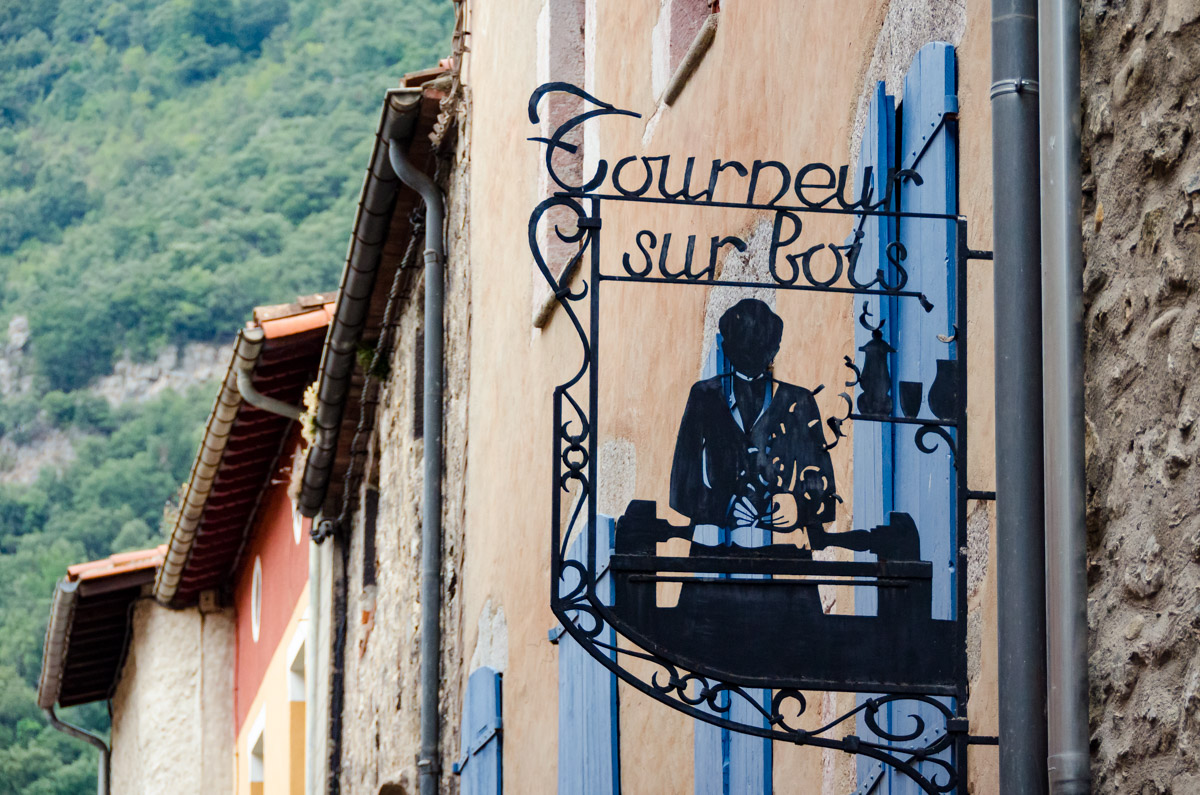 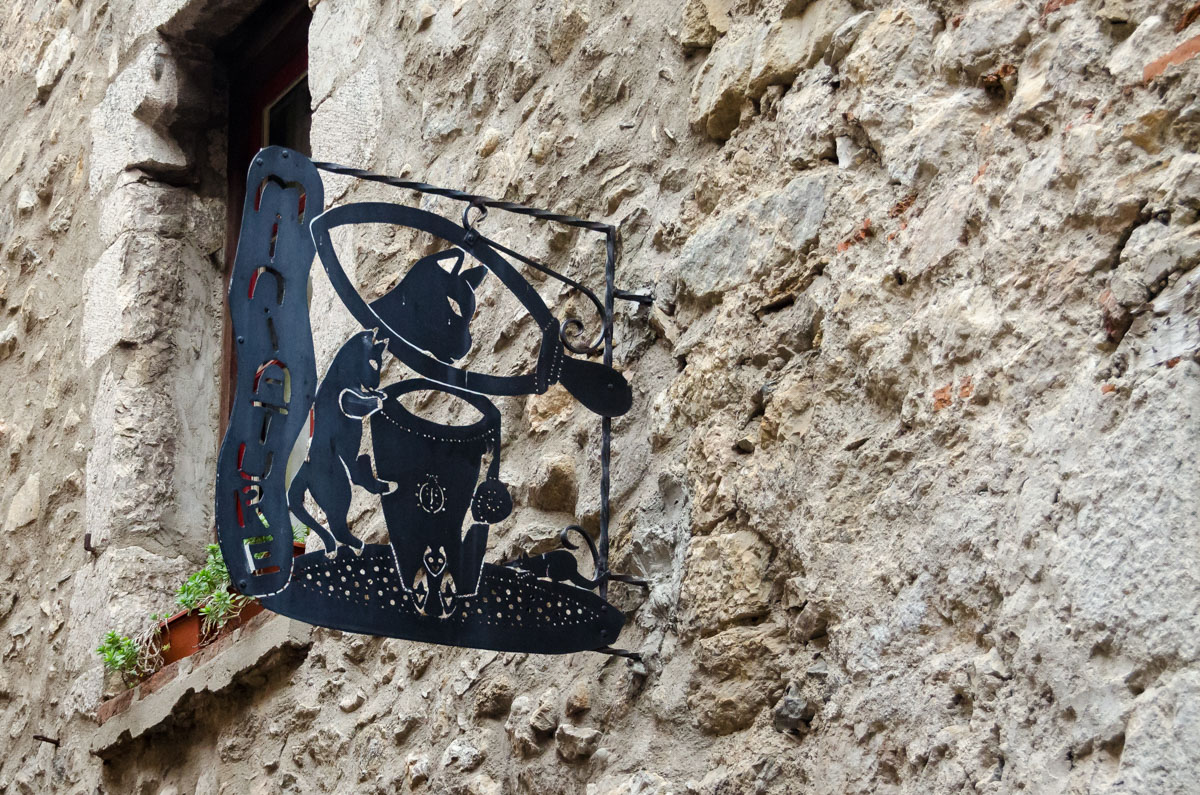 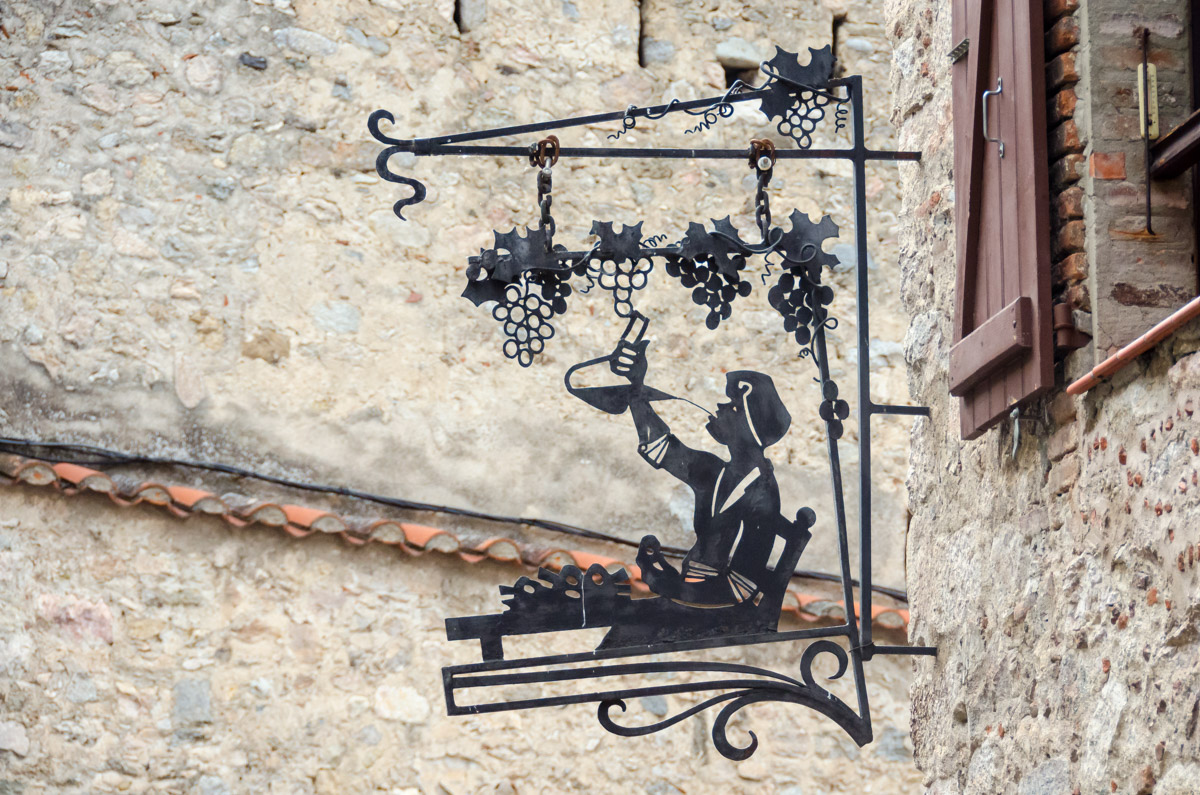 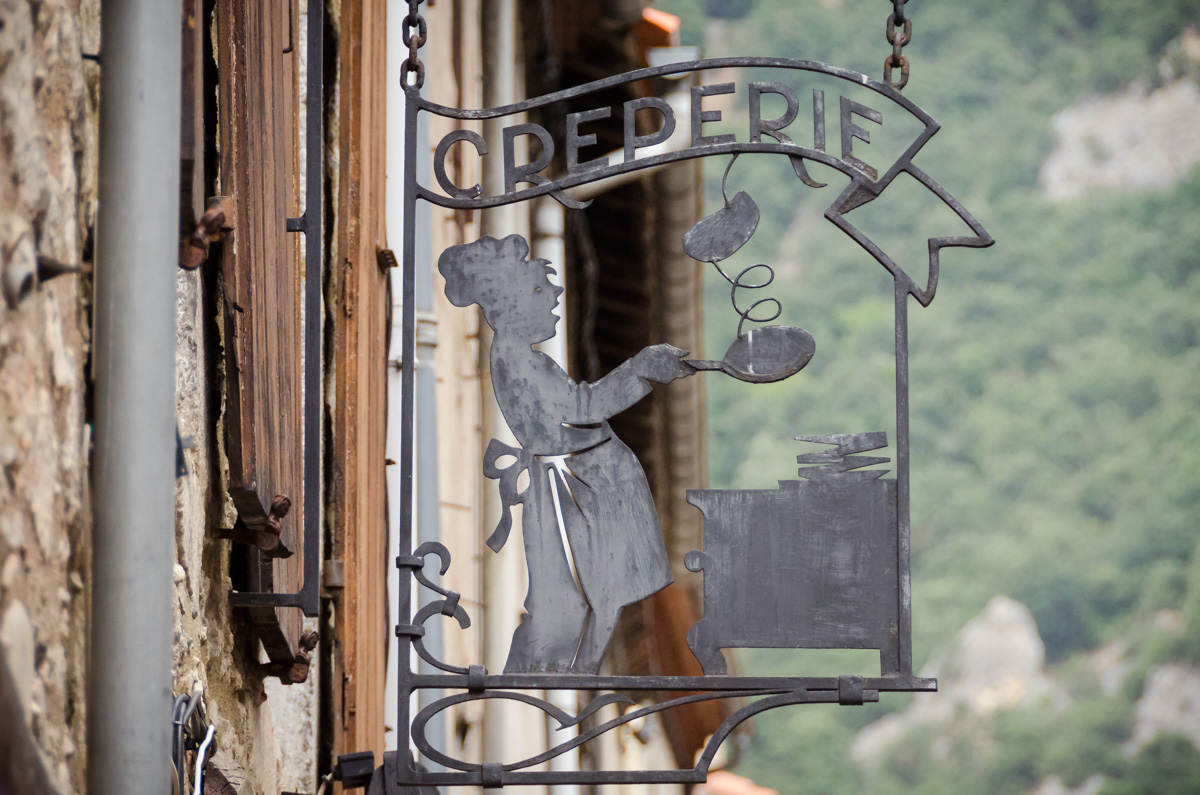 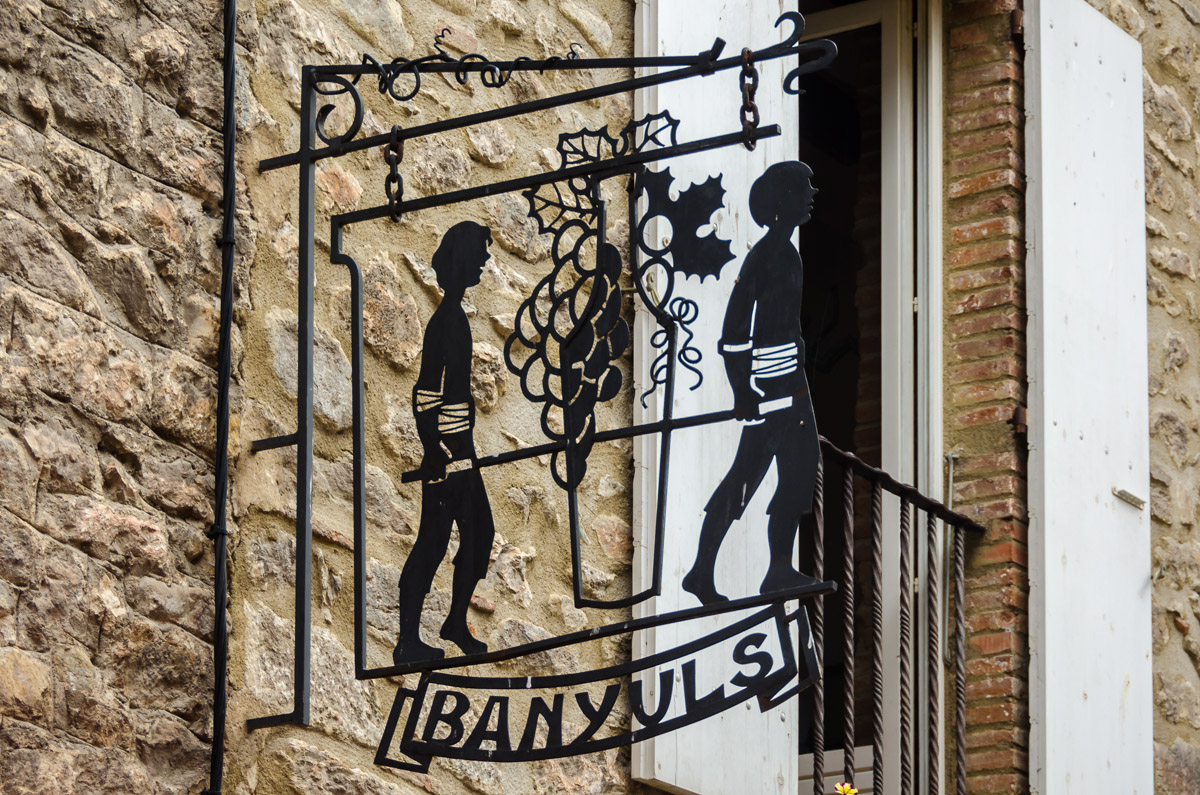 The arched passageway on the northern edge of the town’s perimeter. 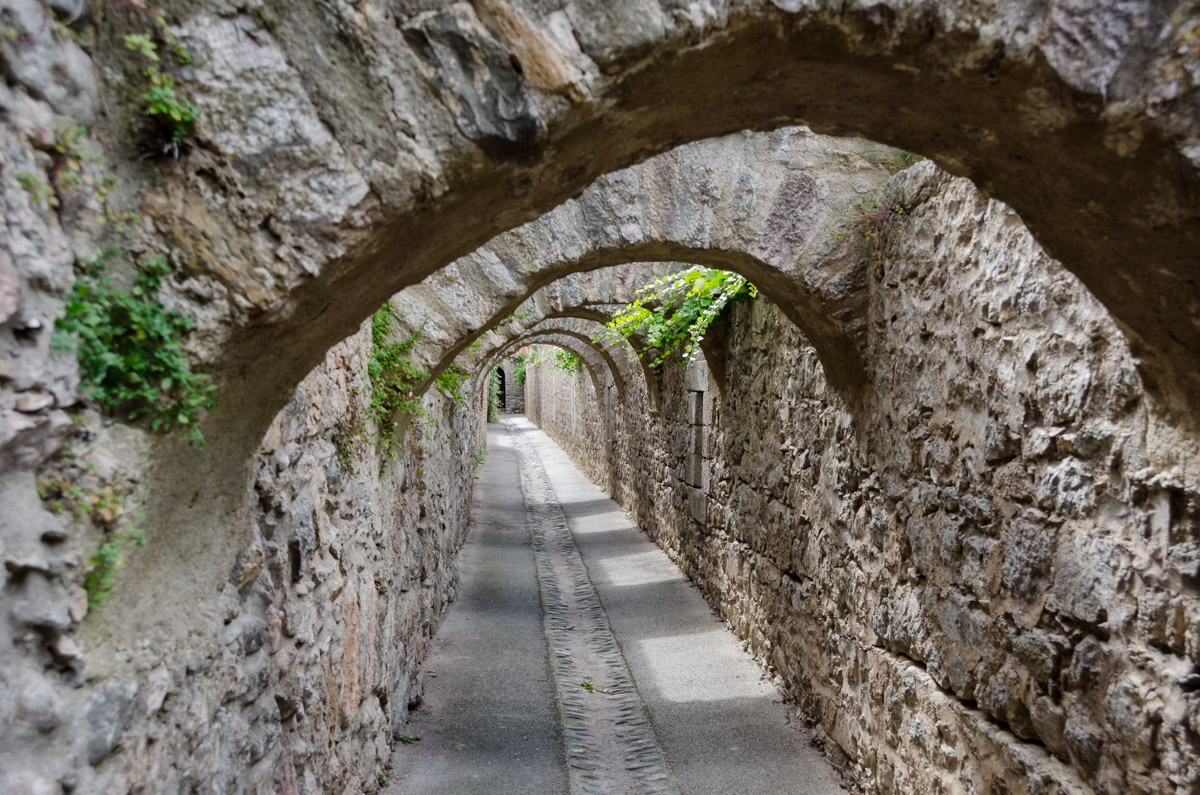 There are three components of Villefranche-de-Conflent’s fortifications included on the World Heritage register. One of them is Cova Bastera, a cave complex outside of the city walls that includes a fortified chamber whose couple of portholes overlook the town. Here is a part of that chamber. 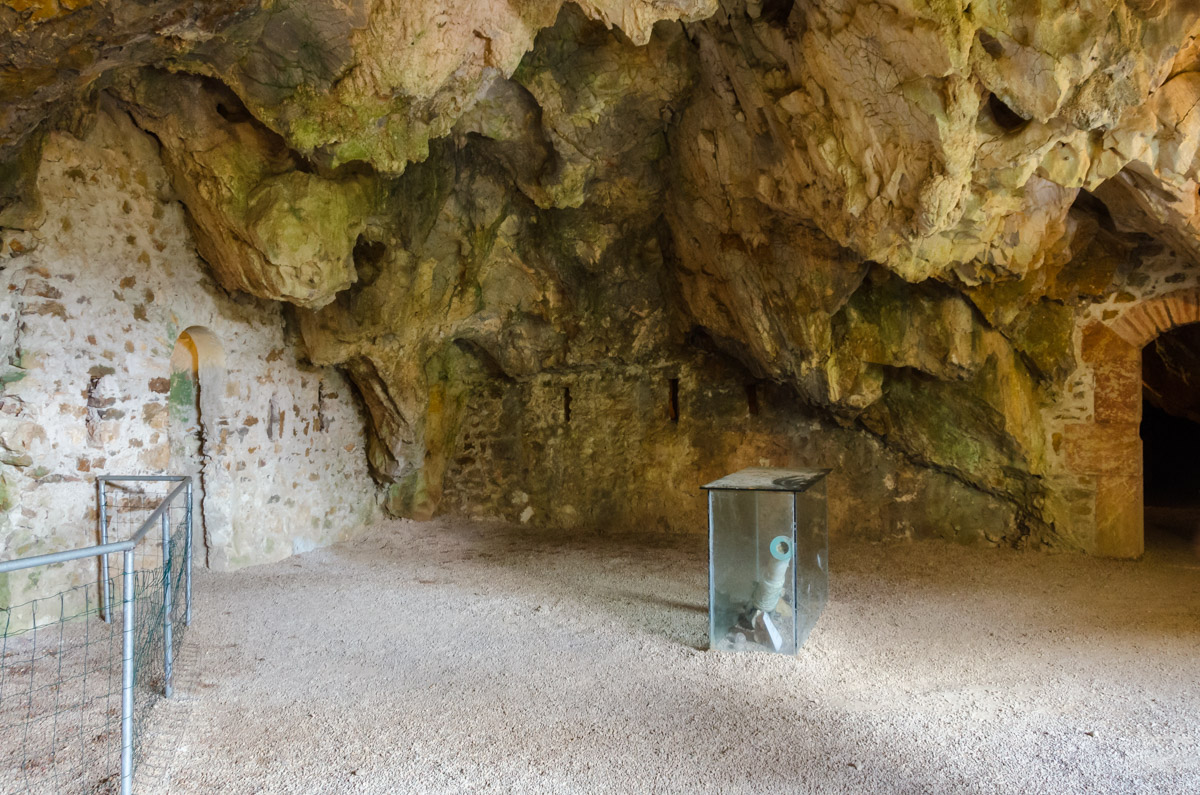 Unfortunately, any impression of Cova Bastera is entirely dwarfed by that of the resplendent (and non-military) Grotte des Grandes Canalettes. If you intend to see both when in town, I strongly suggest doing the less dazzling option first.

The second component of the fortifications are the ramparts. As impressive as they are on the outside, they are somewhat underwhelming as far as their interior is concerned. Historical context is provided at a dozen of landings, but mostly you see just these passages. 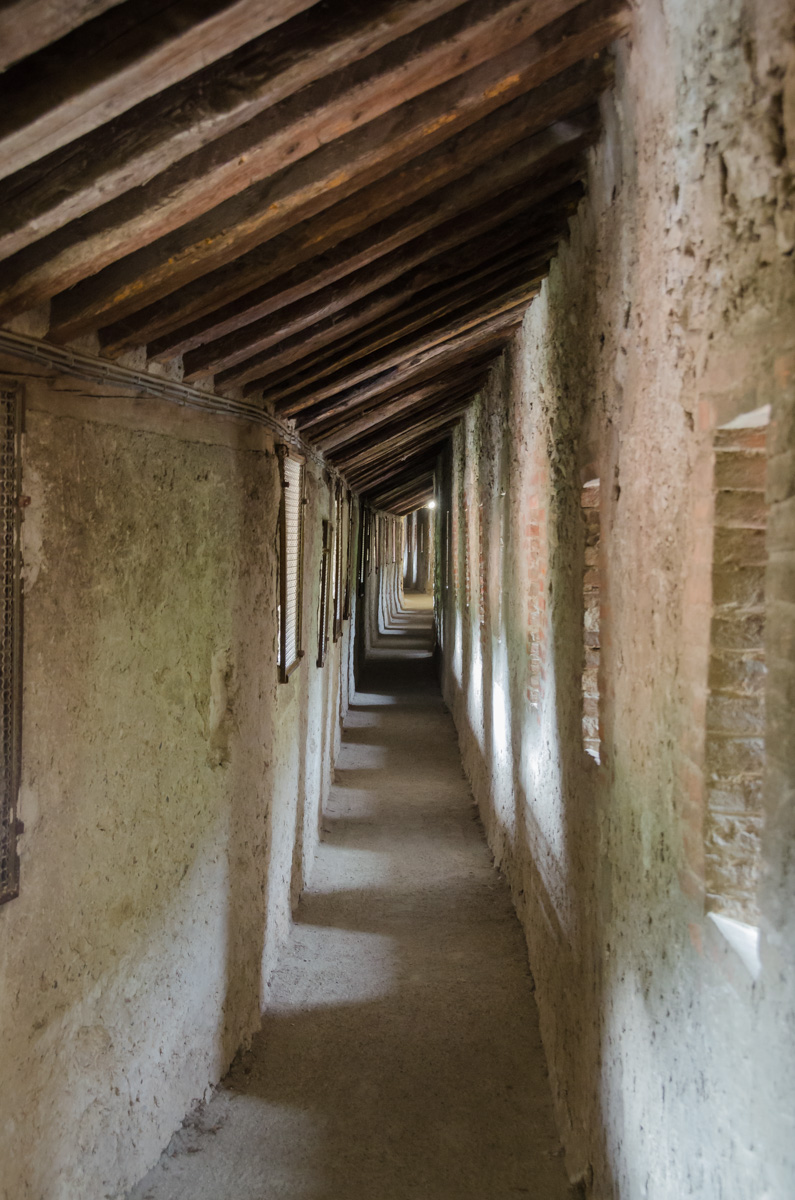 Taking nothing away from the impressiveness of these fortifications, walking along them gets boring very quickly. It would be much more interesting if there were various vantage points to survey the town’s roof-line, but unfortunately there are only a couple of such perspectives from the ramparts. 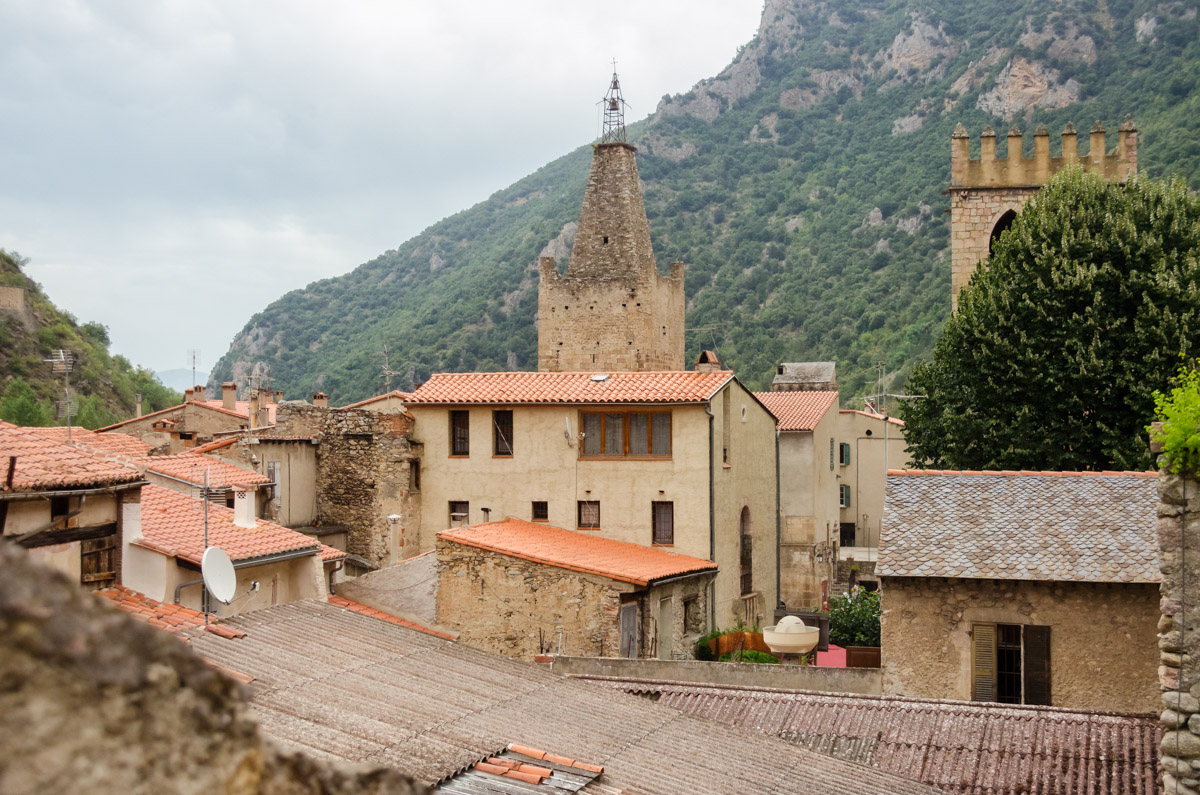 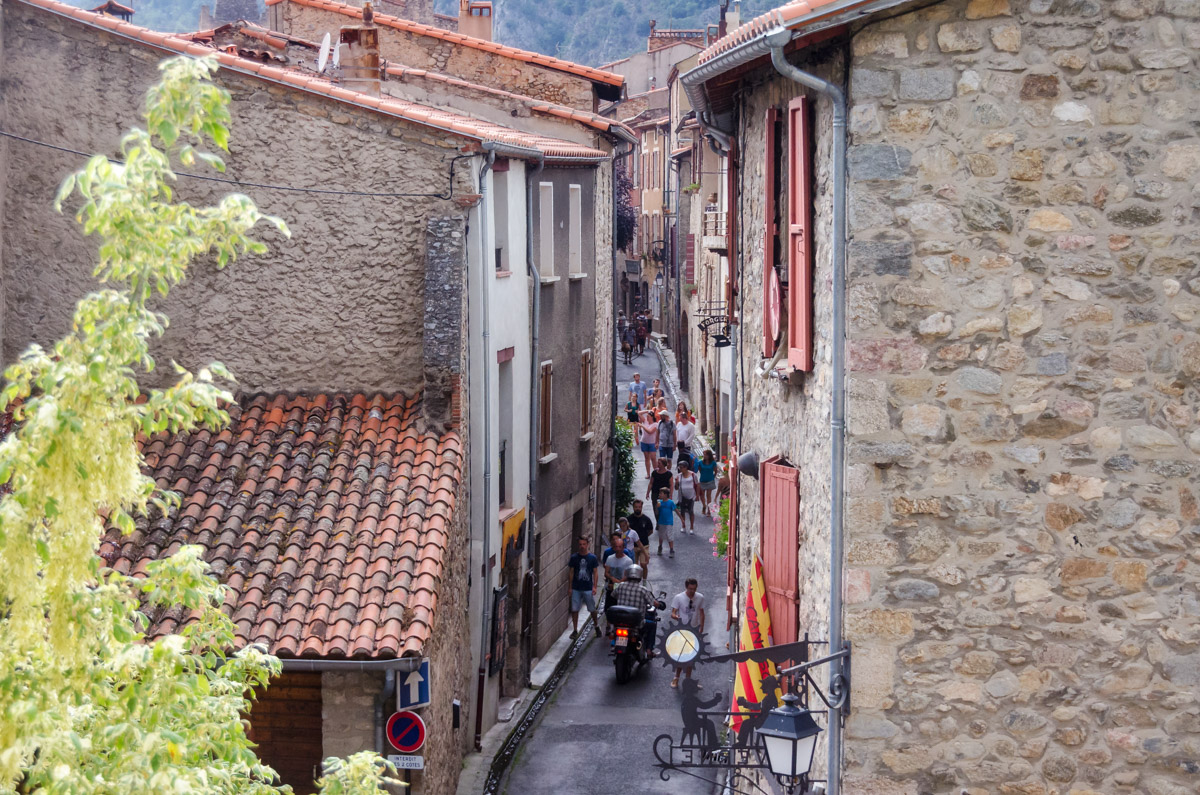 The last component of the fortifications is Fort Libéria high above town. Here it is in the background. 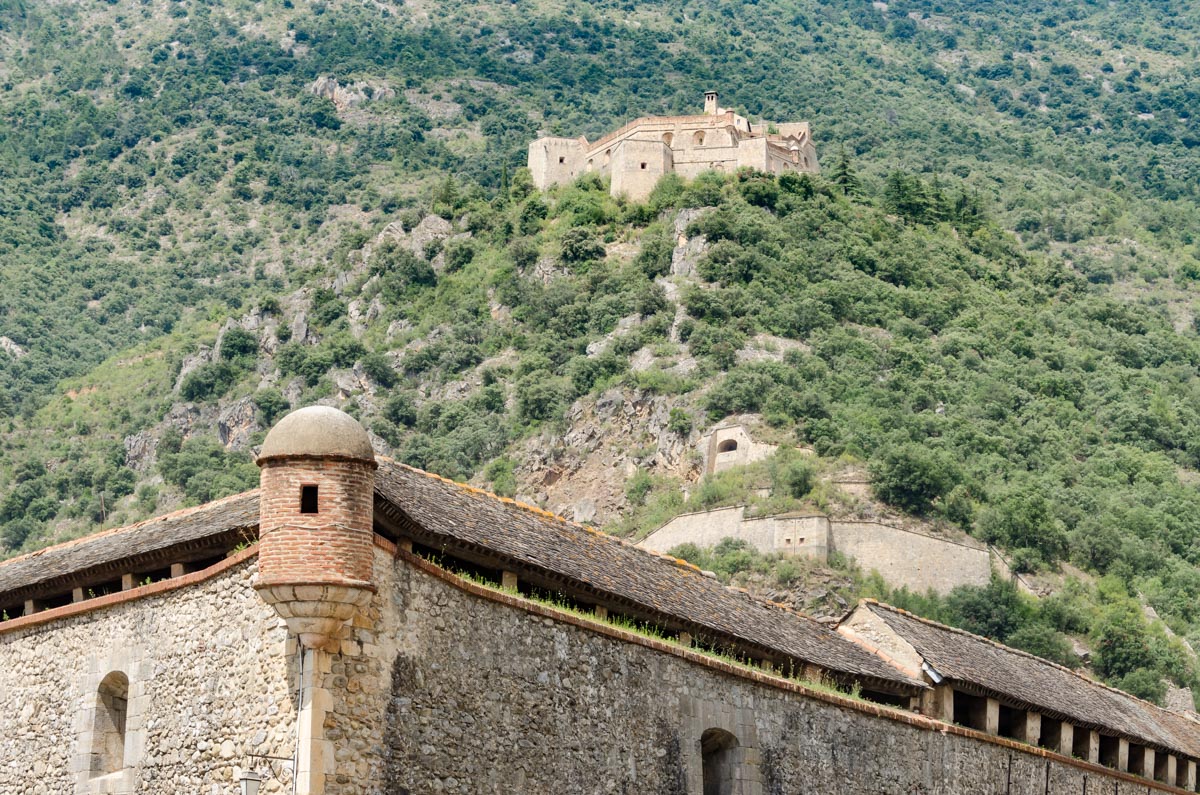 And a closer look. 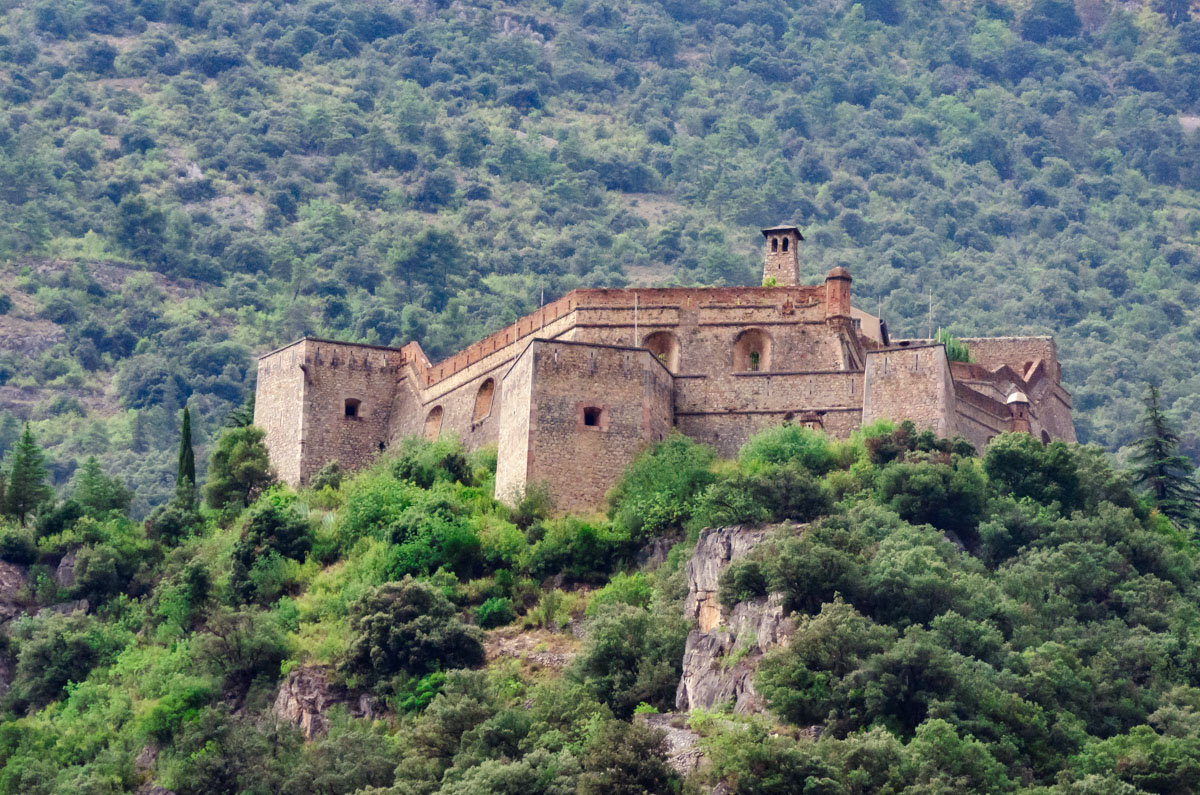 Climbing up to the fort takes good 20 minutes even for the most athletic. Inside, a nice multi-layered example of a self-contained military installation, with barracks, service areas, a church, and fairly impregnable walls. 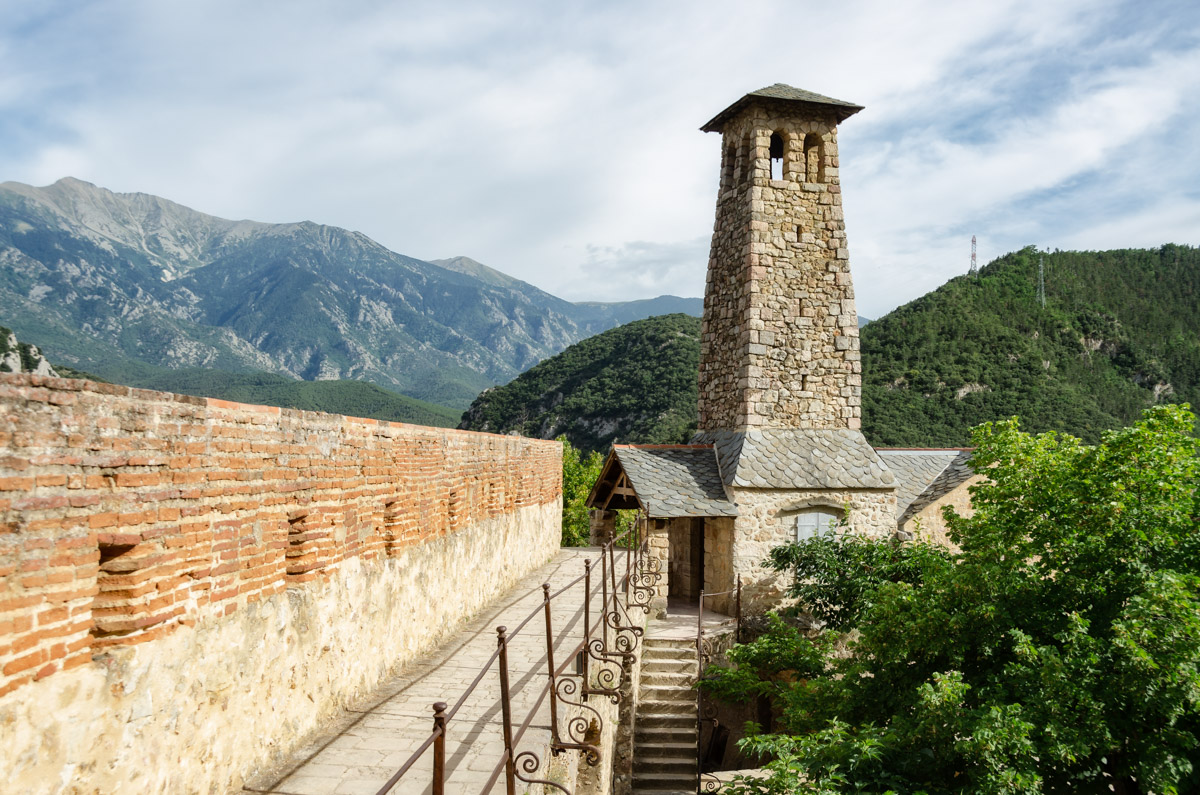 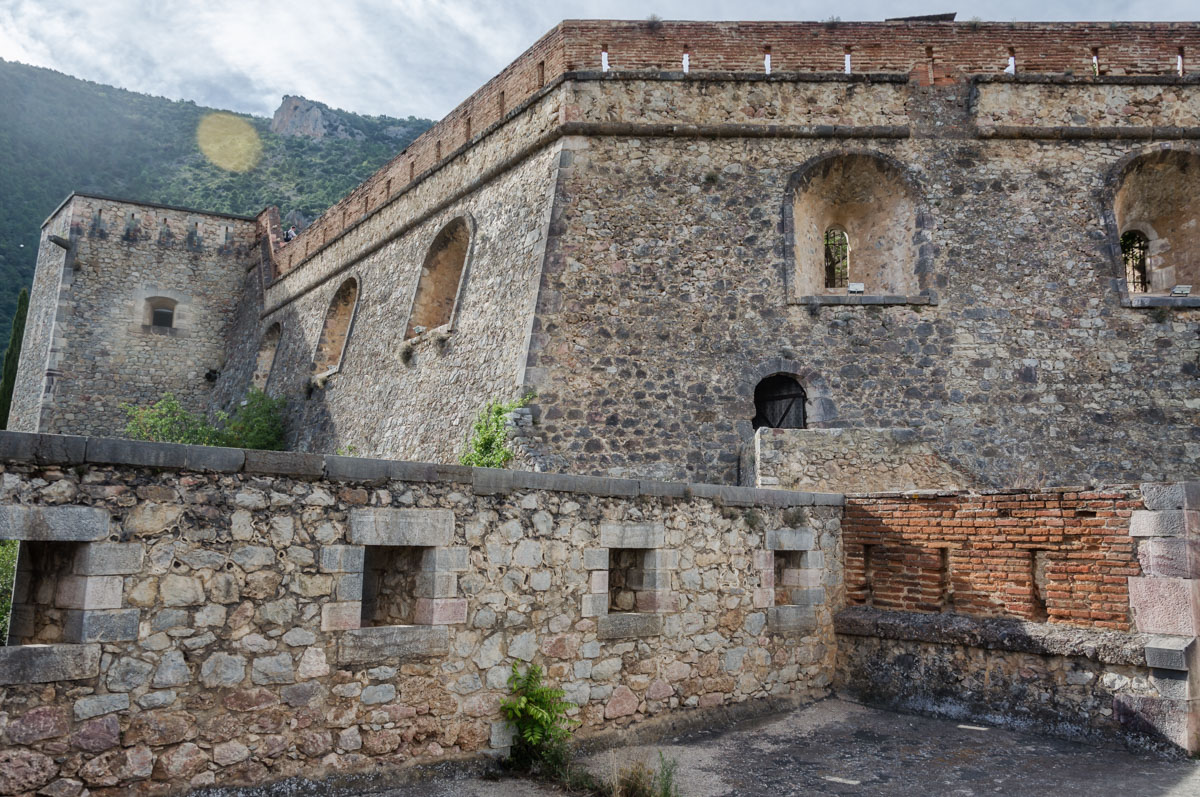 Perspectives of the town from above are hard to come by, though. I managed one through a porthole. 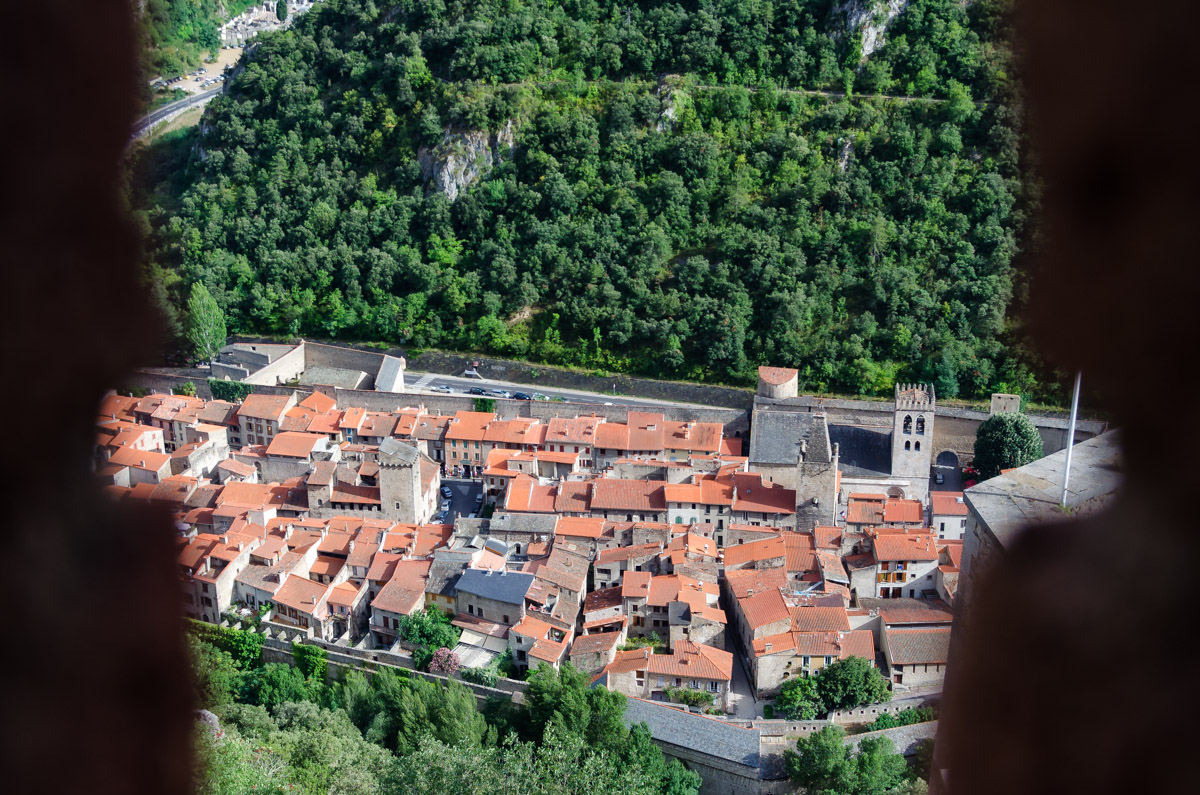 Descent from the fort can be accomplished via an underground passage containing over 750 steps. An open-air landing connects two parts of the passage and finally offers an unobstructed panoramic view over the town. 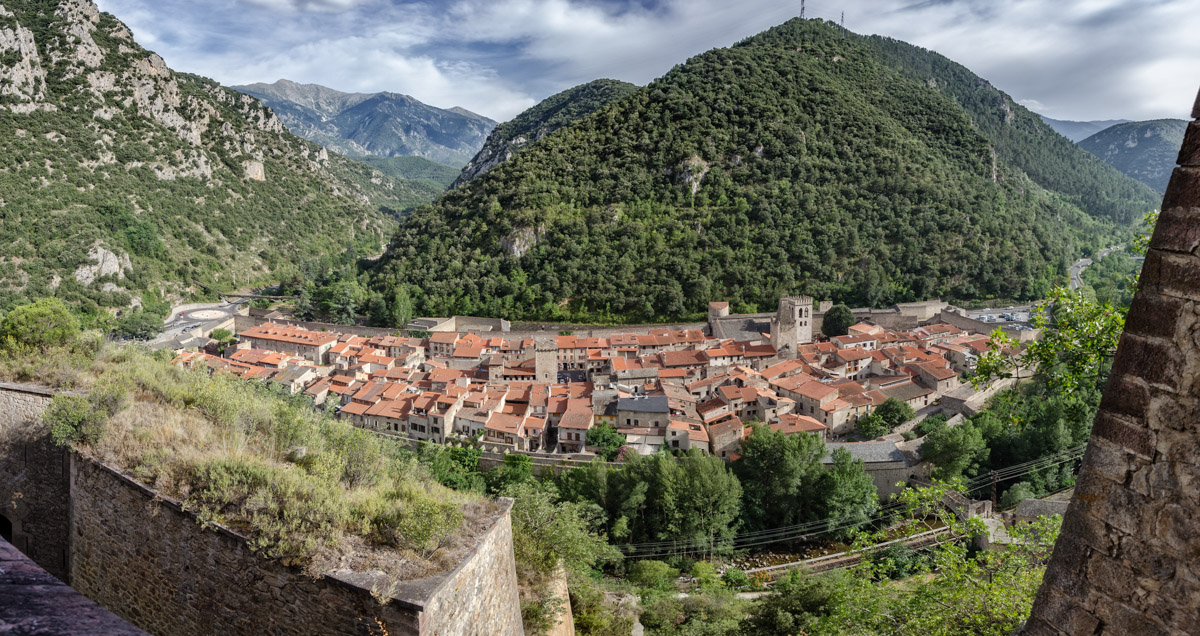 Villefranche-de-Conflent is located about half an hour away by car from Perpignan. You can walk every stretch of pavement within the town walls in a matter of an hour. Add an hour and a half for the caves, another hour-plus for the fort, and about an hour for the ramparts and Cova Bastera if you decide to see them as well. With a leisurely lunch, you may end up extending your visit to the full day.

In fact, that is exactly how it happened for us. I originally planned to set aside a couple of hours in the late afternoon for the nearby Mont-Louis, another one of inscribed Vauban’s fortifications, but a good unhurried meal in between sightseeing in Villefranche ultimately spoiled those plans. We ended up spending close to 8 hours in total in the tiny town.

These and other pictures taken in Villefranche-de-Conflent can be found in my Flickr collection.