There are several serial properties on the World Heritage list that inscribe prehistoric rock and cave art. The most extensive of them – in fact, somewhat excessively extensive – is the Rock Art of Mediterranean Basin of Iberian Peninsula, which comprises 758 individual locations in the eastern part of Spain. Majority of those are open-air, middle-of-nowhere, hikers-only places which supposedly retain vivid and graphic depictions of prehistoric life.

Prehistoric art is not very high on the list of my interests, but I happen to prioritize World Heritage sites in my traveling itineraries. The westernmost location of this serial site sits within reasonable driving distance from our customary base in Costa Brava. Although I could find little information online about what Pedra de les Orenettes could offer, I figured I’d swing by it while my family enjoyed their beach time. (Actually, Kimmy tagged along with me on the promise of going for a hike in the mountains.)

The map suggested that the hike one-way would take no more than 30 minutes, and we duly climbed most of the way in our car, leaving it at the edge of a nearby urban development. From there, a deserted and reasonably level road with the grand name of “Prehistoric Route” took us towards the rocks. 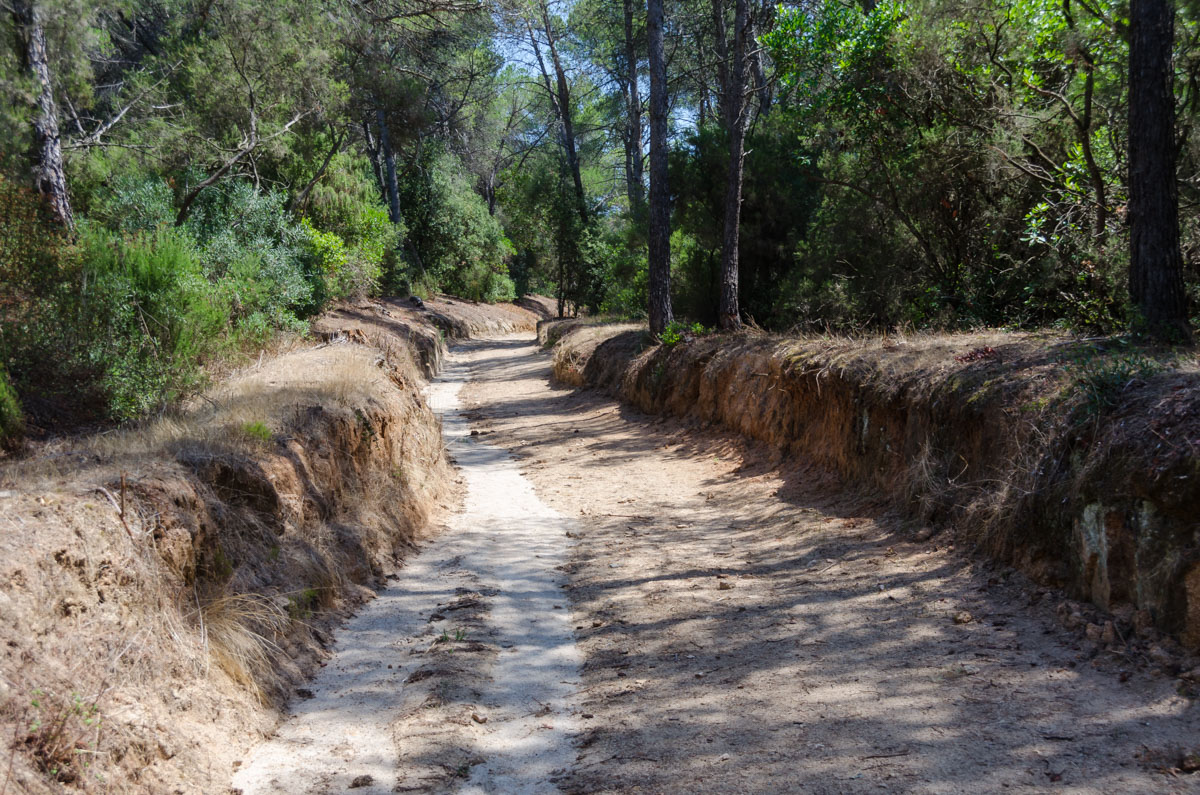 It is possible that this barrier used to ration traffic on this road in times immemorial, but more likely it is a comparatively recent decoration. 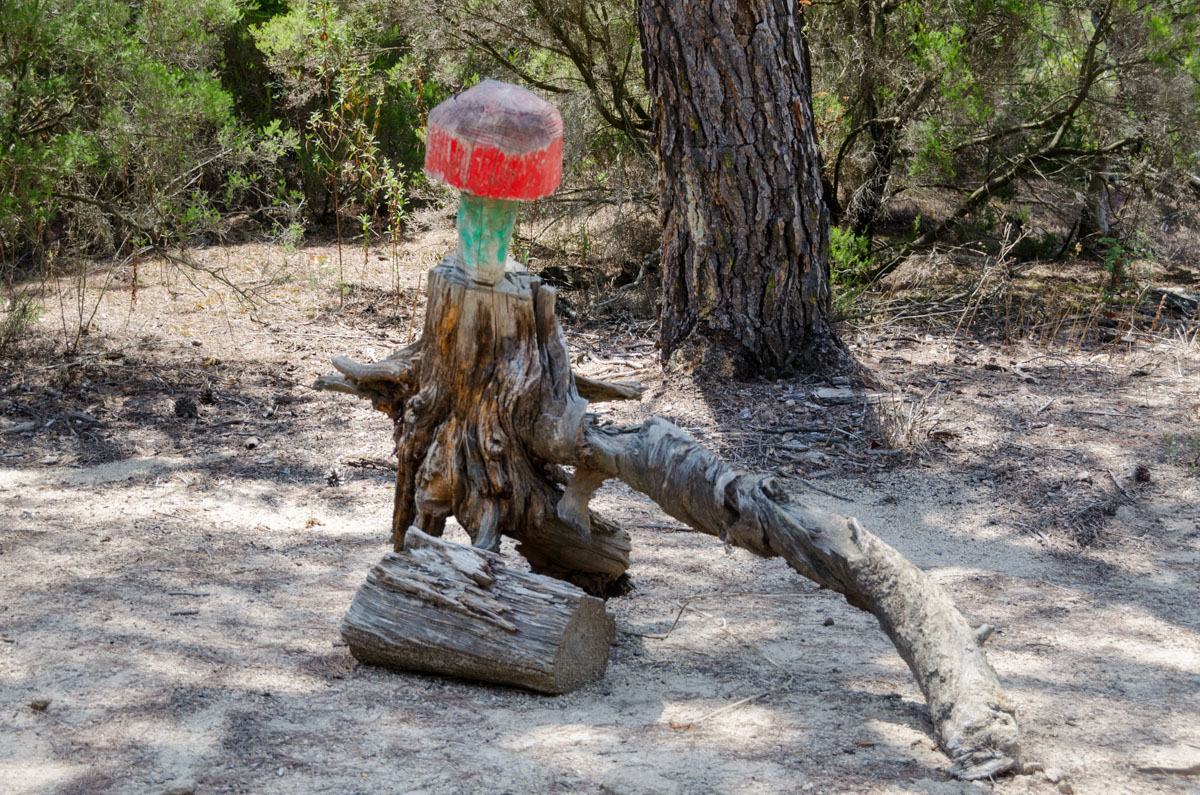 Pedra de les Orenettes turned out to be a fairly expressive pile of rocks. If you look at it from different angles you can find different shapes in the formations, not unlike finding shapes in clouds. From this angle, for instance, it looks like a turtle’s head extending far from its shell. 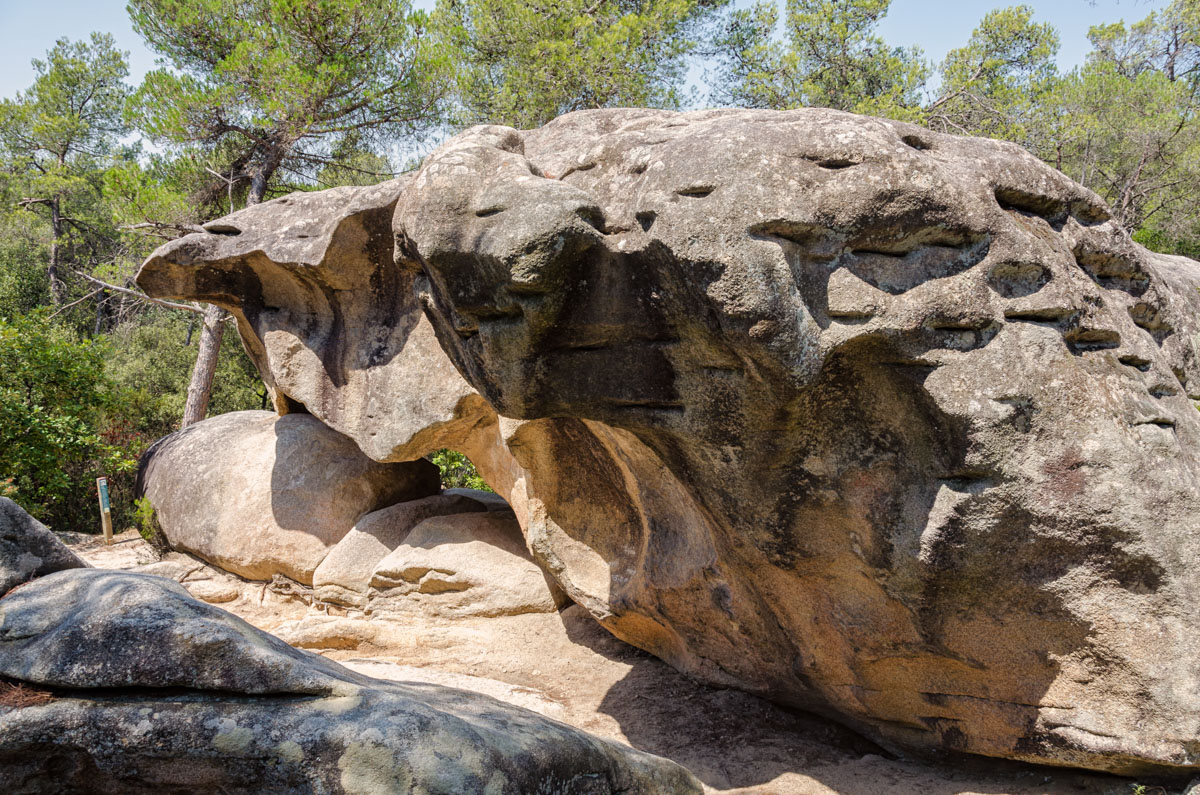 Change the angle slightly, and there is suddenly a bit more of a Dementor vibe. 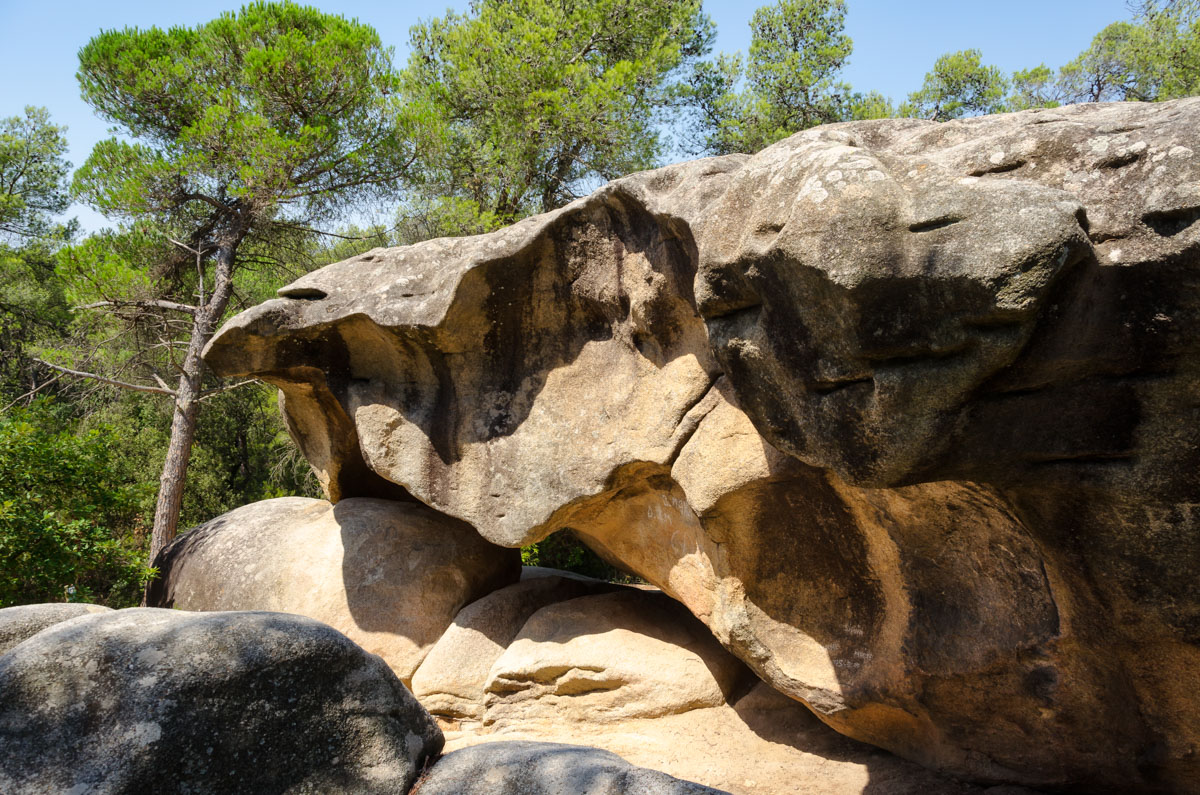 From one of the topside angles, this part of the rock has a sci-fi invader undertones. 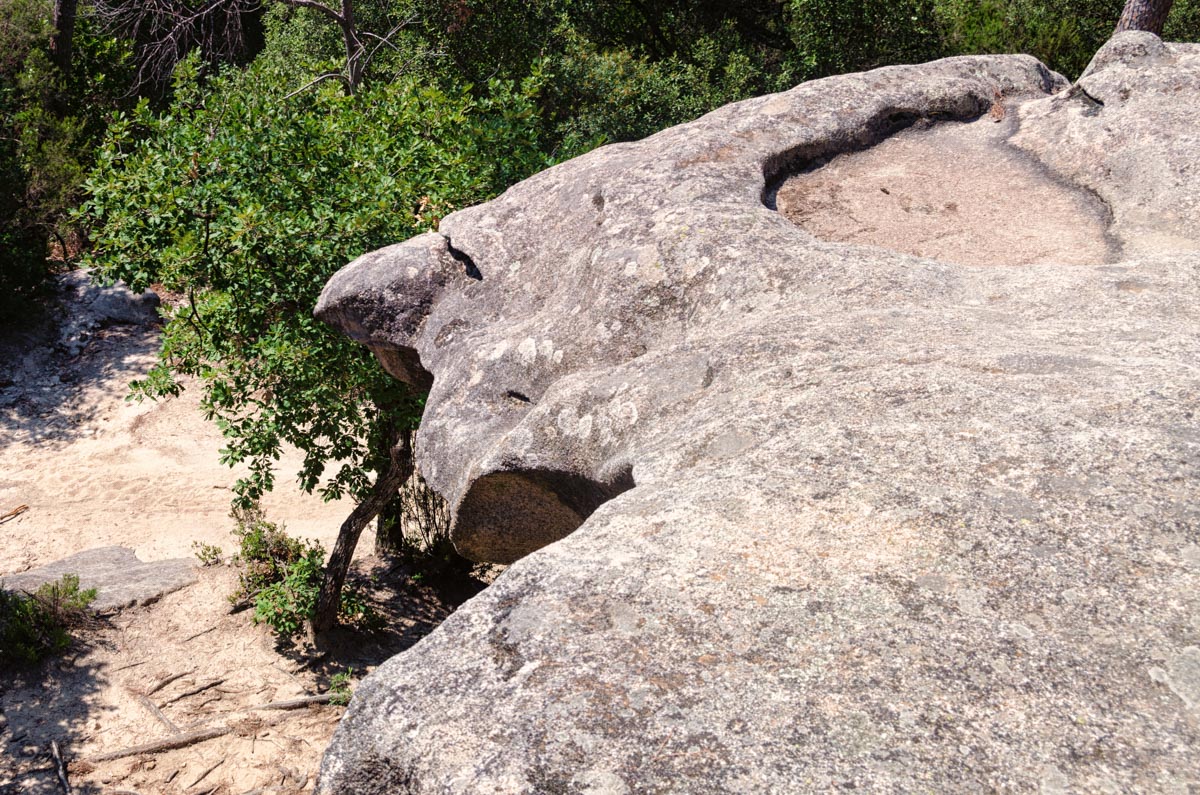 This perspective suggests a hippo with its upper jaw opened wide and rhino behind it competing for the right to pounce on a prostrate prey. 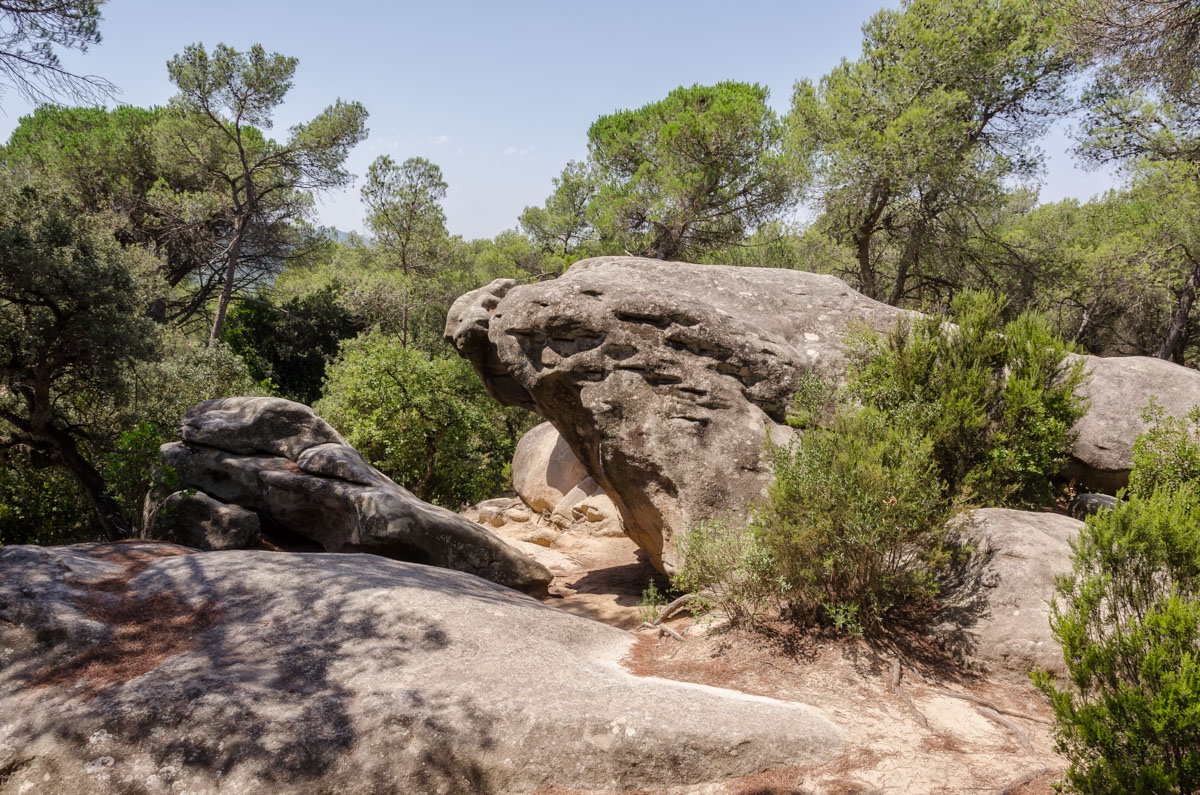 A close-up looks like a head of a moray, maybe… 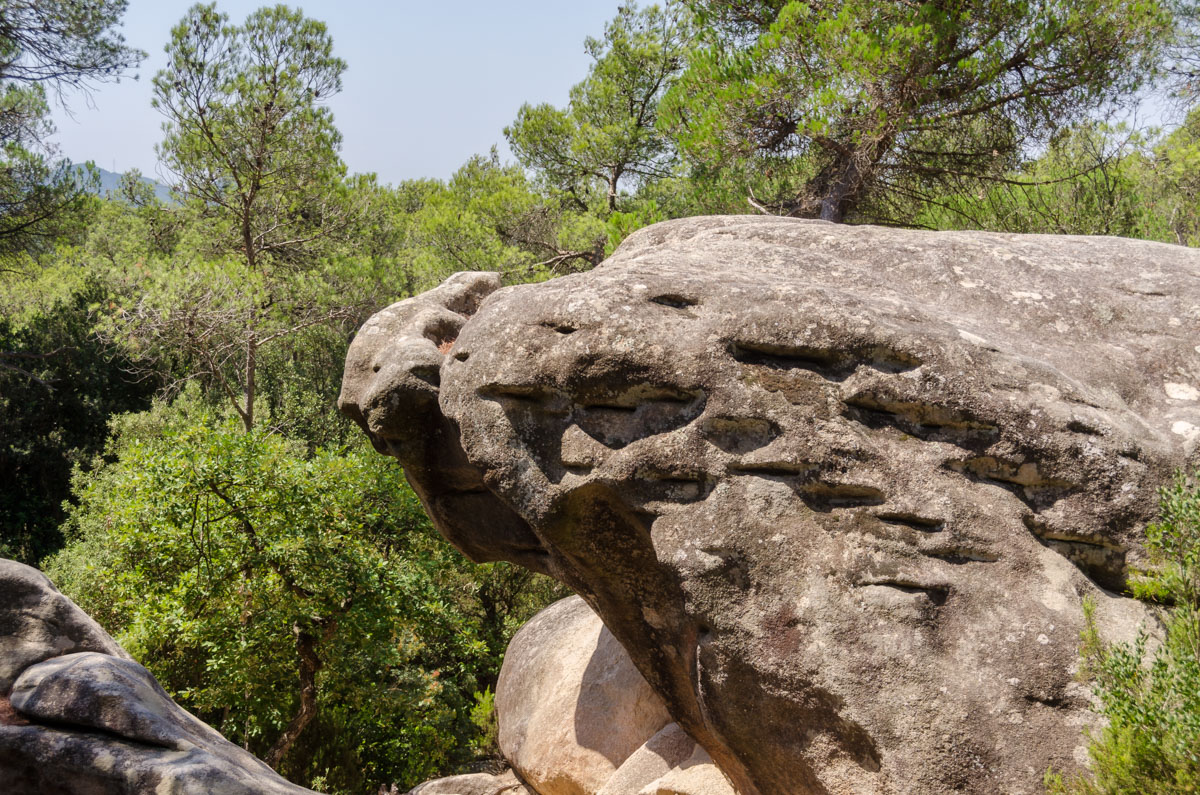 And this fragment somehow looks like enormous buttocks about to plop down on a rock. 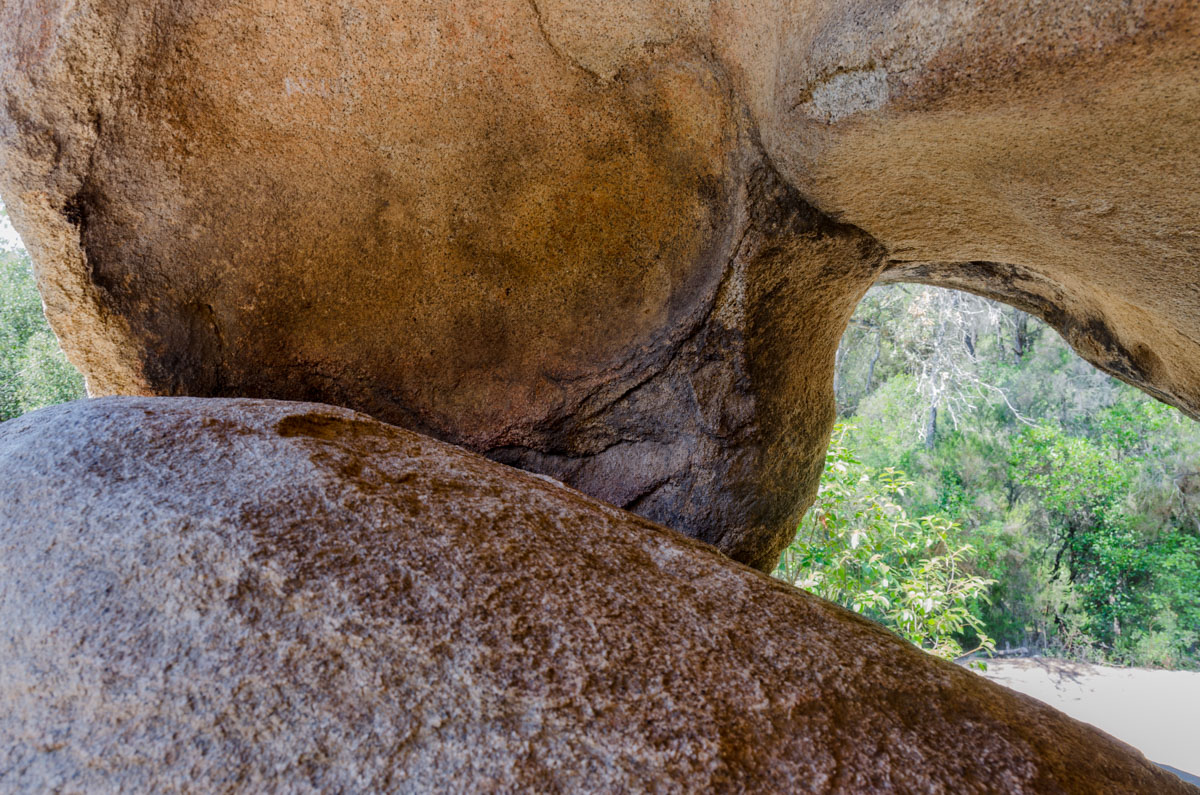 Now, what the about the rock art, you ask.

Here is the kicker: All you get at Pedra de les Orenettes is a few smudges that suggest where the drawings used to be. The time has not been kind to the art. 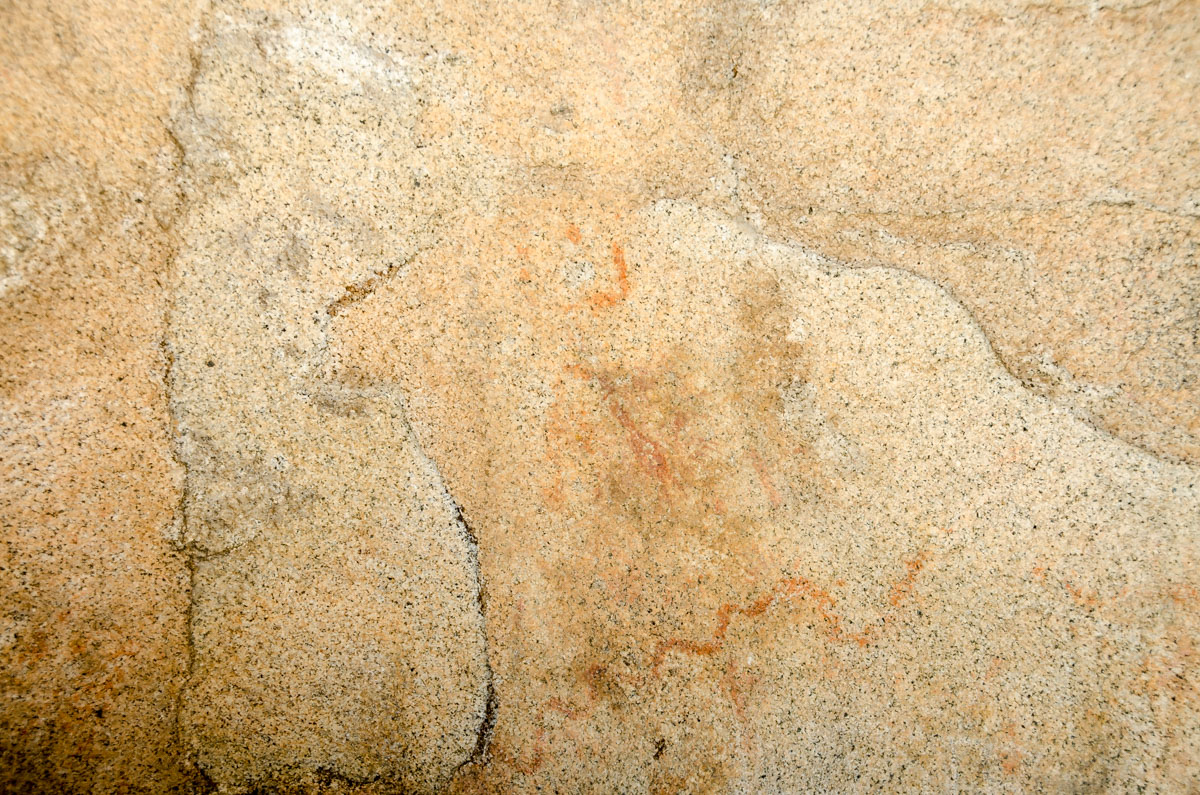 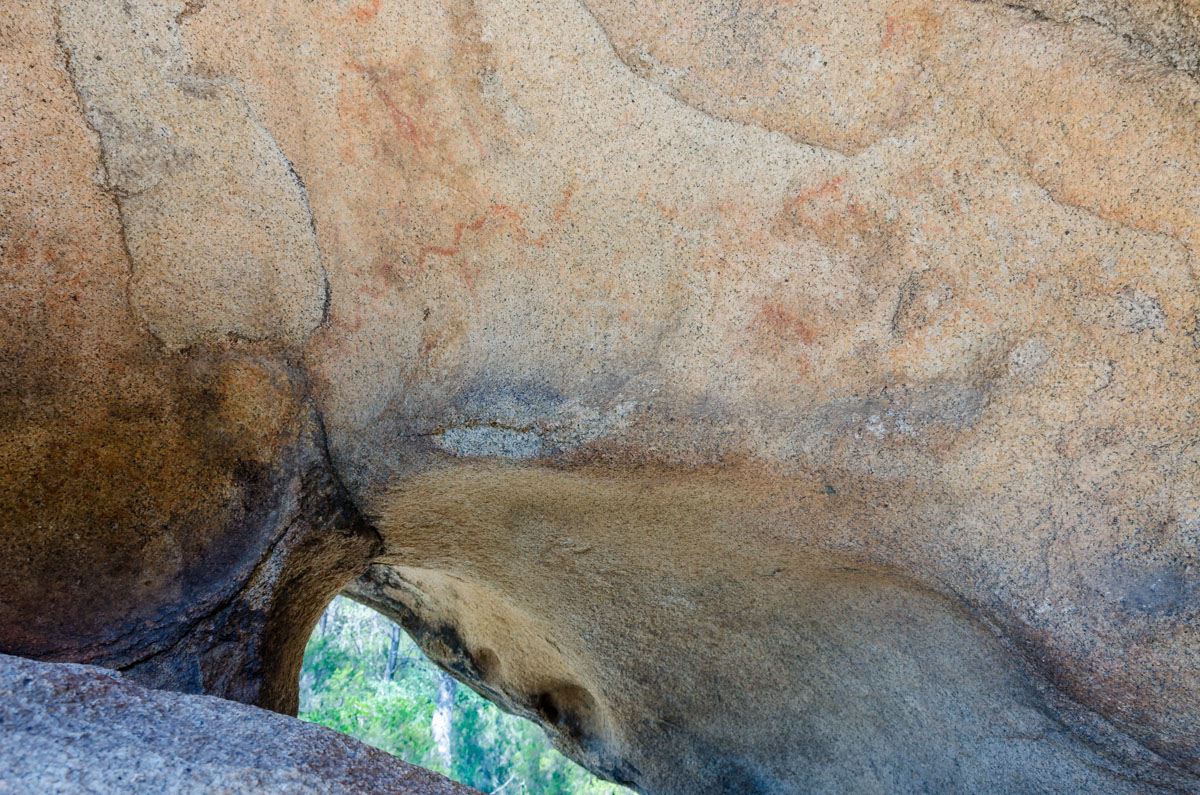 Other locations of this property may be better preserved and one or two are made into proper museums, but this one is an example of a location that no longer possesses what it is inscribed for. No wonder nobody on the web recommends seeing Pedra de les Orenettes for the prehistoric art, despite its comparative accessibility.

Which presents me with somewhat a conundrum as to whether to count the site as visited. Pedra de les Orenettes is explicitly inscribed and I went all out to visit it. By my own liberal criteria, I should count the entire site visited if I made a concerted effort to see any part of it.

But if prehistoric drawings are your cup of tea, you are certainly better off planning a visit to Sierra de Albarracín in Teruel or to Abrics de l’Ermita Interpretive Centre in Ulldecona, between Tarragona and Valencia. I might have to stop by one of those in the future, to make my count less suspect.