A place in my memory: Mottingham

Majority of my readers would most likely not know Mottingham. Do you mean Nottingham, of Robin Hood fame?… Native Londoners may recognize the name of the village but give me a quizzical look as to why I would choose to highlight a rather nondescript location instead of one of hundreds of places that are famous or breathtaking or both in this great city.

The simple answer to that: This used to be my home.

I find myself exceedingly nostalgic lately. Perhaps it’s the stream of friends who go to London for vacations or business trips. Perhaps it’s my recent trip to the British Isles that reminded me of many things, big and small, that I used to enjoy in my years of living in England. Whatever the reasons, I think back to that period of our life a lot more nowadays than I did just a couple of years ago.

My work offices were in Canary Wharf, so we were looking for housing in Southeast London, which theoretically offered a good blend of a fairly easy commute and nice digs for our money. We were specifically aiming for Blackheath (which I highlighted not so long ago), but the available rentals left my lovely wife in a state of mild shock on account of space and amenities. For the last showing, our agent took us about 10 minutes further southeast, to the village of Mottingham. The house stood on a busy main street but it had the layout and the amount of space that appealed to our American sensibilities. None of the other houses we had seen came even close. That, and an incredible back garden, made our decision very easy. We agreed terms on the spot.

In this picture I am standing in front of the house looking along our street. 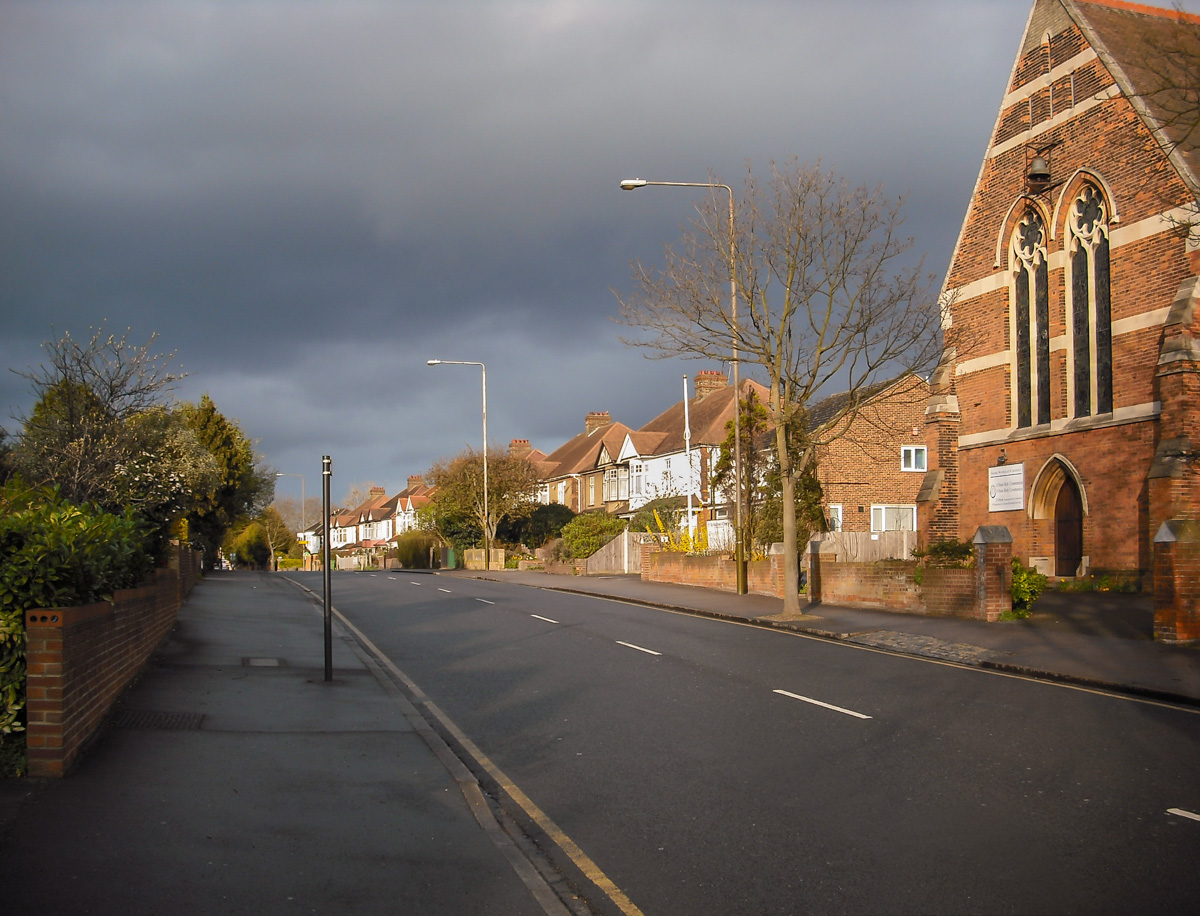 It is the end of the day on a Saturday, which was the only time other than the middle of the night that the street could be so empty. The nearest major intersection is another hundred yards beyond the bend in the road, and on busy days the queue of cars waiting for the change in the traffic light would extend well beyond our driveway.

The skies are very typically British, though.

Another hundred yards through that major intersection is the Mottingham train station from where Southeastern regional railway lines would take us to Charing Cross in the heart of London on any given weekend. It took us between 30 minutes and an hour one-way to get to the city center by public transport. Definitely not a very central location, but the proximity of the station was important for my daily commute.

Not any less important was the fact that making a right turn on that intersection would get us on A20 which in a few minutes would become M20 and in another 45 minutes would deposit us at the Channel Tunnel train terminal in Folkestone. I used to joke that the directions to the continent from our house were, left from the driveway, right at the traffic light, and then straight all the way.

Making a left at the traffic light would brings us to Blackheath or Greenwich in about 10 minutes, or if we were so inclined to take a car, to central London in about an hour.

A not exactly famous but nonetheless quite pleasant to visit Art Nouveau Eltham Palace is within walking distance from here further up the road. Kent, the Garden of England, begins around A20-to-M20 change, and all of its attractions are within a comparatively short drive from here.

So, yes, we sometimes express regret at not having chosen to live in the central parts of London. But ours was still a pretty good location.

And on a sunny day, or right after a rainfall, simply pretty.

Posted in In London, Local scenery