In Madrid to see a soccer game

Fun trips are coming thick and fast in the second half of this year for me. I am still several photo-essays away from completing the story of our summer trip to Catalonia, I just returned from a jaunt around California wine country, and there I am in Madrid for a somewhat uncommon reason.

Although this trip was planned a good month and a half in advance, it had a whiff of spontaneity about it.

People who know me reasonably well are aware of the fact that I am a big soccer fan. I closely follow all major European leagues and international competitions, greatly aided and abetted in recent years by the availability of top-notch soccer on various cable channels.

I very rarely go to games in person, though. In fact, in the last decade I can count less than a handful of such occasions; all of them have been of non-competitive nature – either international exhibitions or pre-season games featuring non-US-based teams. My reluctance to go to a stadium is one part general disdain for mass gatherings and three parts convenience of watching replays from different angles on a large-screen TV.

This year, the team from my hometown in Russia earned a place in the UEFA Champions League, one of the most prestigious soccer tournaments on the planet. The magnitude of this once-in-a-lifetime achievement rivals Chicago Cubs winning the World Series – except the Cubs actually have done it before, however long ago, and have a discernible chance of repeating it in a reasonable timeframe, whereas FC Rostov has never been flying this high in the entire history of the game and is highly unlikely to ever come close again in this particular fan’s life span.

In other words, if I ever had an imperative for going to a soccer game in person, it was now. The group-stage game in Madrid against Atletico – easily one of the best ten club sides in all of Europe – worked the best in terms of attraction, timing and logistics, so my brother and I converged on the Spanish capital to lend our support to Rostov.

Me being me, I managed to fit quite an amount of sightseeing in the time leading to the game and took a significant number of photographs which will eventually see the light of day on these pages. I also sampled a lot of tapas, drank a lot of Rioja, lingered on leafy squares – in other words, tried to make a 3-night stay in one of my favorite cities as fulfilling as possible.

(By the way, it probably goes without saying that 3 nights is not a reasonable length of a trip to Europe from the US, considering the time required for getting there and back and the effects of the jet lag. The fourth night may make it slightly less taxing, but in general you should go for at least 5.)

In the hours leading to the game, we made acquaintances with some of the fans who travelled from Russia specifically for the game. I am pretty sure that they will recount it as a highlight of their trip, meeting a couple of middle-aged guys who had left Rostov-na-Donu a quarter of a century ago but remain the fans of the local team and travelled all the way from America to watch this particular game. 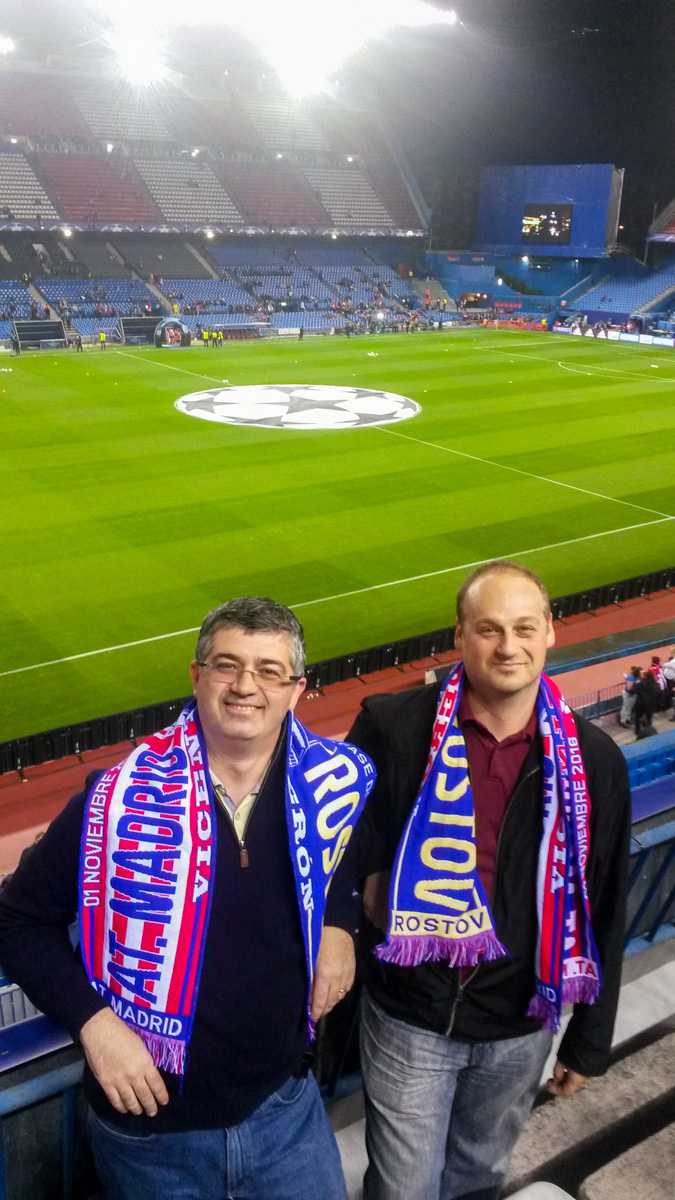 The game itself provided few highlights and ended in heartbreak. The gap in class between the two teams was painfully obvious. Rostov defended valiantly, if barely competently, but the fact that the score was even heading into the last minutes was due mainly to the relative stinker on the part of Atletico. Then, in the dying moments of the game, a defensive mistake allowed Atletico’s star forward to score the winning goal, taking away what would have been a famous result for us. No one in their right mind expected Rostov to qualify for the later stages of the Champions League, but earning points against European giants would have been huge.

A Russian-speaking man sitting in the stands with his two teenage sons not far from us said “We fought” as we shook hands before parting our ways. I felt it was more a case of “We tried”. Regardless, it was a fairly unique and brilliant experience all around.

If the club ever proves me wrong and returns to these heights in the coming years, they can count on me showing up to cheer them on.

Posted in Sports, State of travel