It pains me to admit that until just a few years ago I was not even aware of the existence of Met Cloisters. Its comparatively remote location near the northern tip of Manhattan island played a role in my never being able to set aside time for a visit. Only this past Sunday, my lovely wife finally pushed the stars into alignment to make a trip to the Cloisters possible. 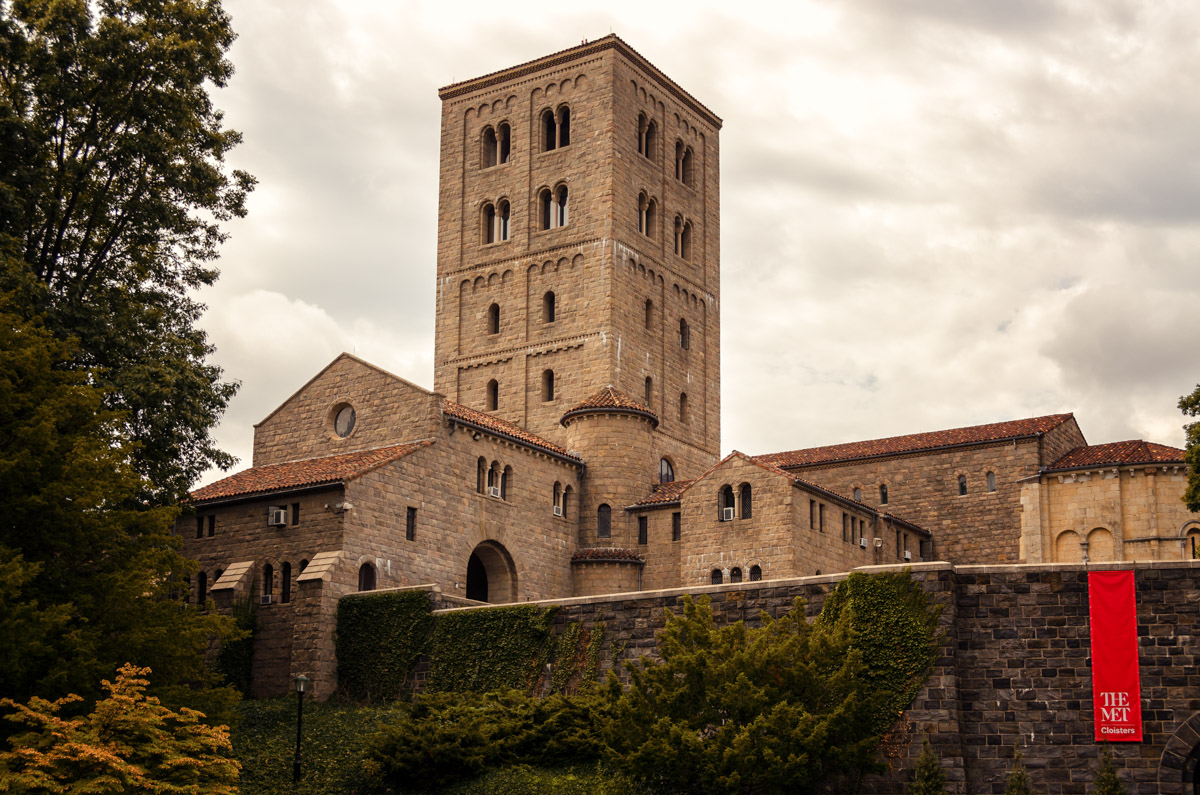 In certain sense, I could hardly expect to be impressed by the NYC landmark. After all, I have been to many cathedrals and monasteries around Europe and explored a significant number of cloisters (here is a recent entry featuring one). A museum built less than a hundred years ago with the aim of reconstructing the feeling of monastic life would not compare to a real thing, would it?

I suppose it is all in the eye of the beholder. If you are after centuries-old authenticity, you may appreciate the fact that reconstructions used real materials from real historic places but you may still feel the place is artificial. Conversely, if you enjoy the attention to recreated detail and the variety of exhibits, some of which date to Ancient Roman times, you will find the place simply delightful.

The term “cloister”, although colloqially used as a synonym to “monastery”, is technically an architectural feature consisting of covered walkways that usually enclose or adjoin a garden. Normally, a cathedral or a convent would have one cloister. The museum has four of them, hence the plural noun in its name. Each of the cloisters is named after its principal historic source, an abandoned monastery or abbey somewhere in France.

Bonnefont cloister comes from a Cistercian abbey in the French region of Midi-Pyrénées. 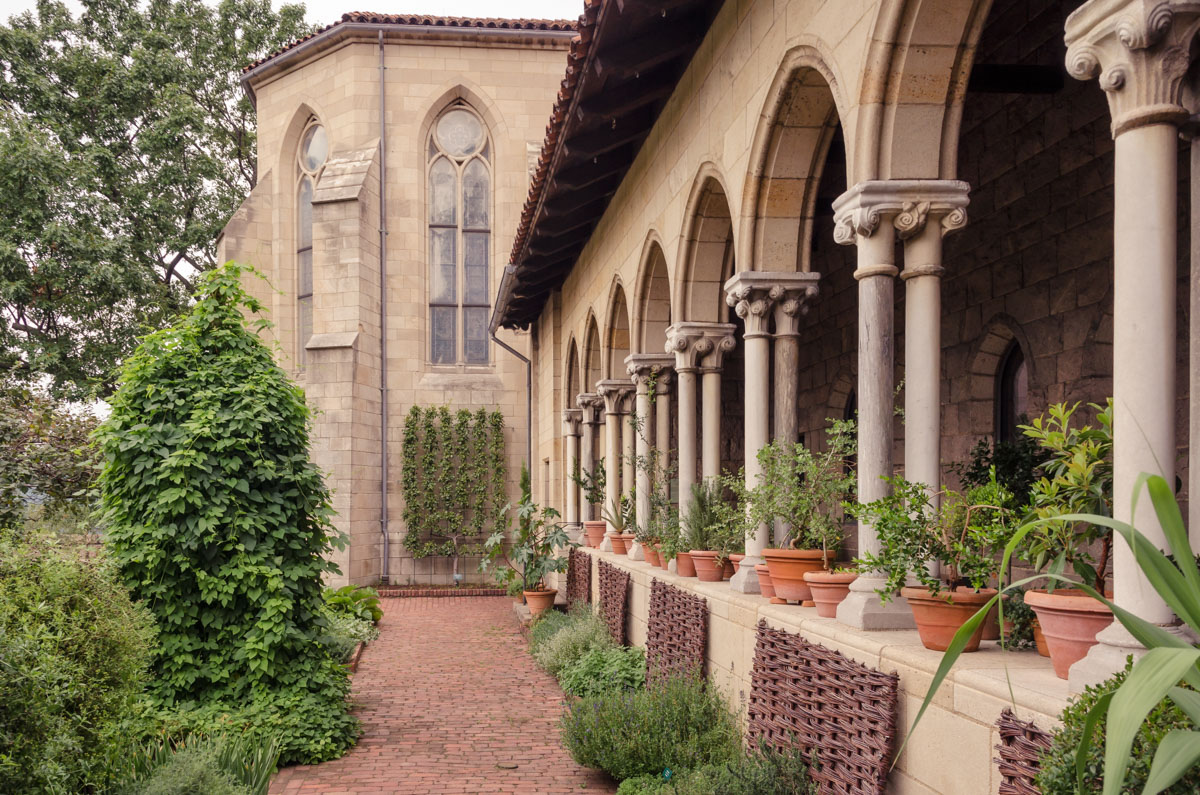 The wellhead, in use since the 12th century, sits at the center of the garden, surrounded by trees with grotesquely curved branches. 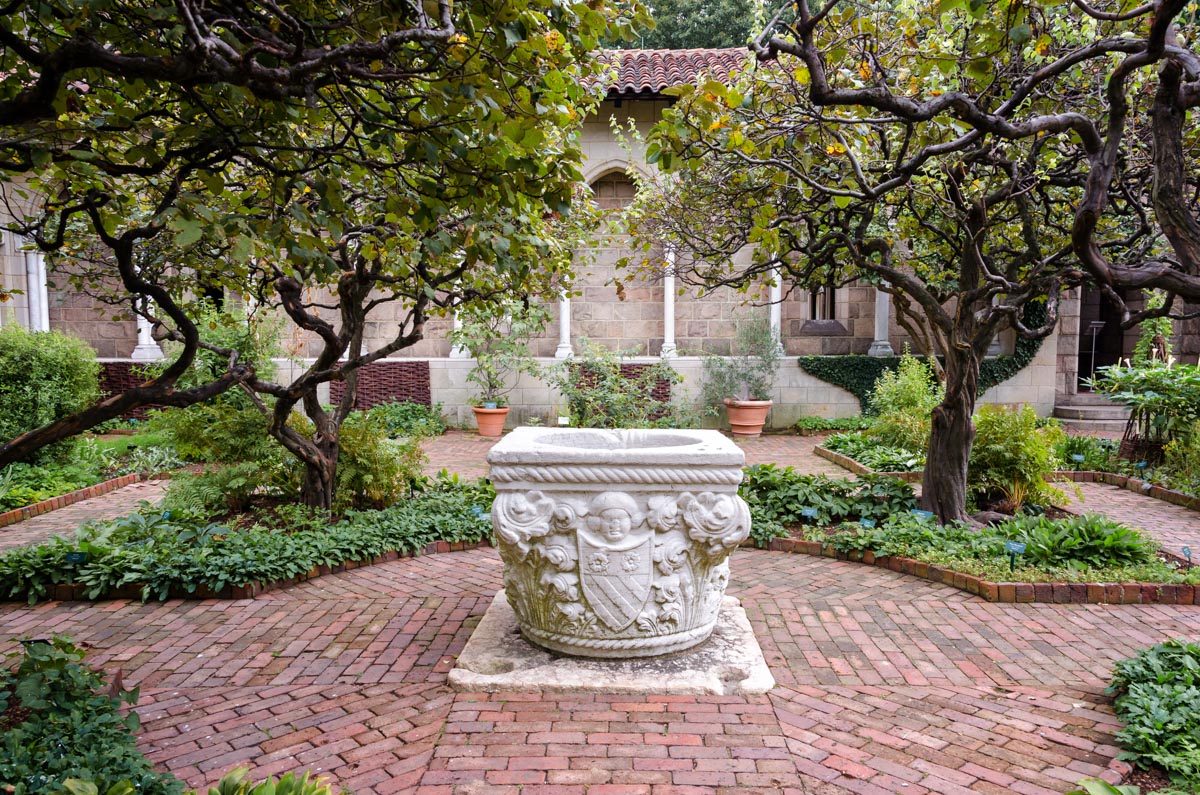 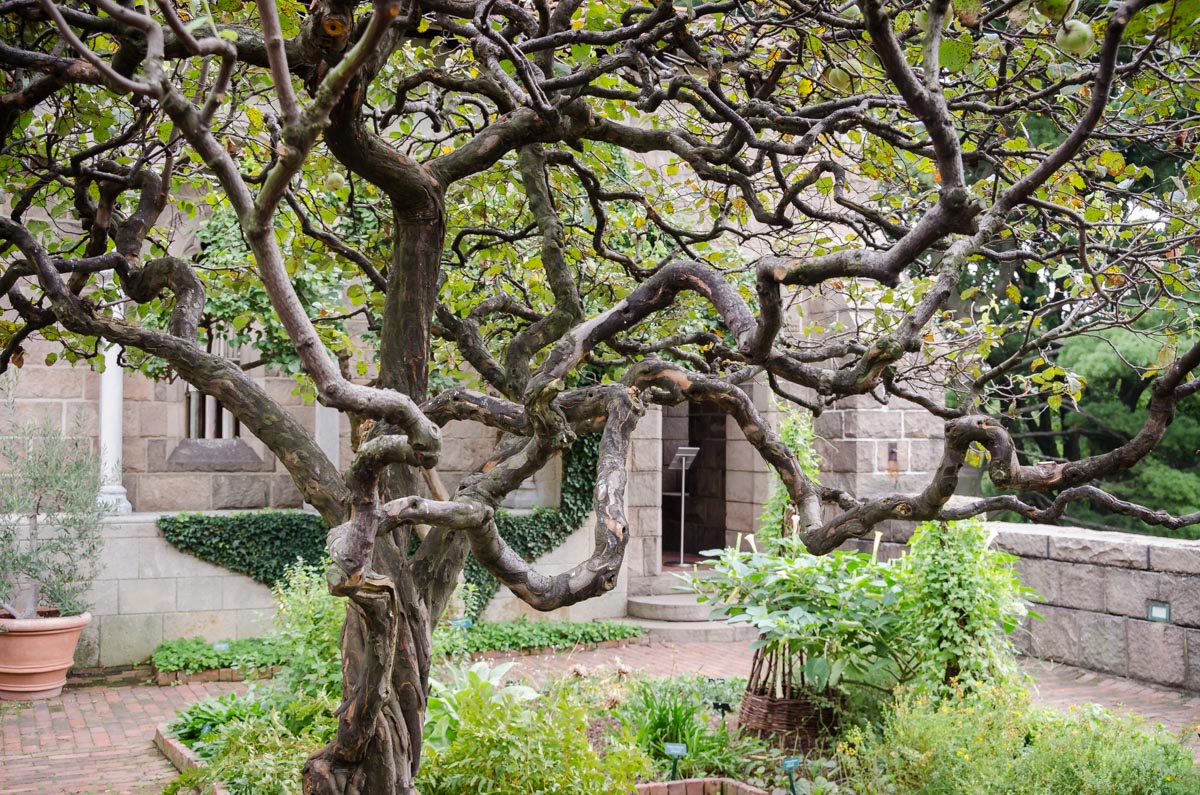 The medieval herb garden grows various plants and fruits, including some marked as dangerous. 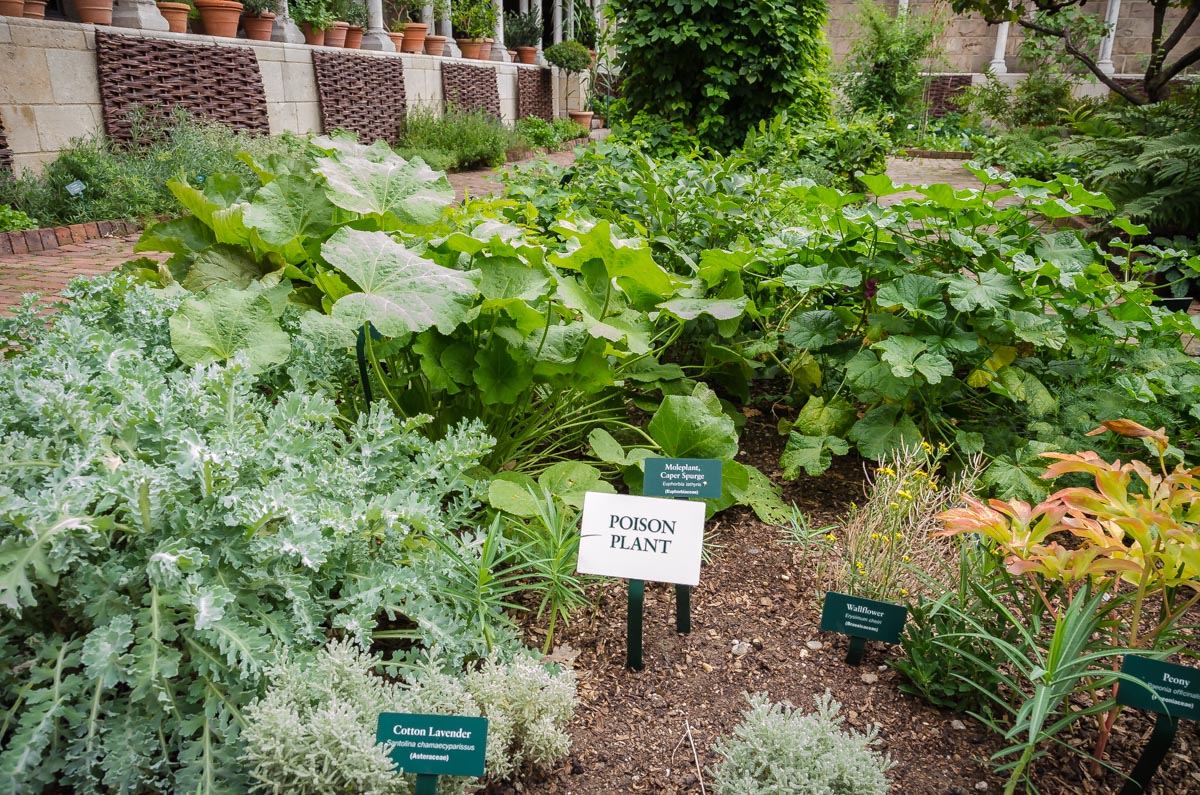 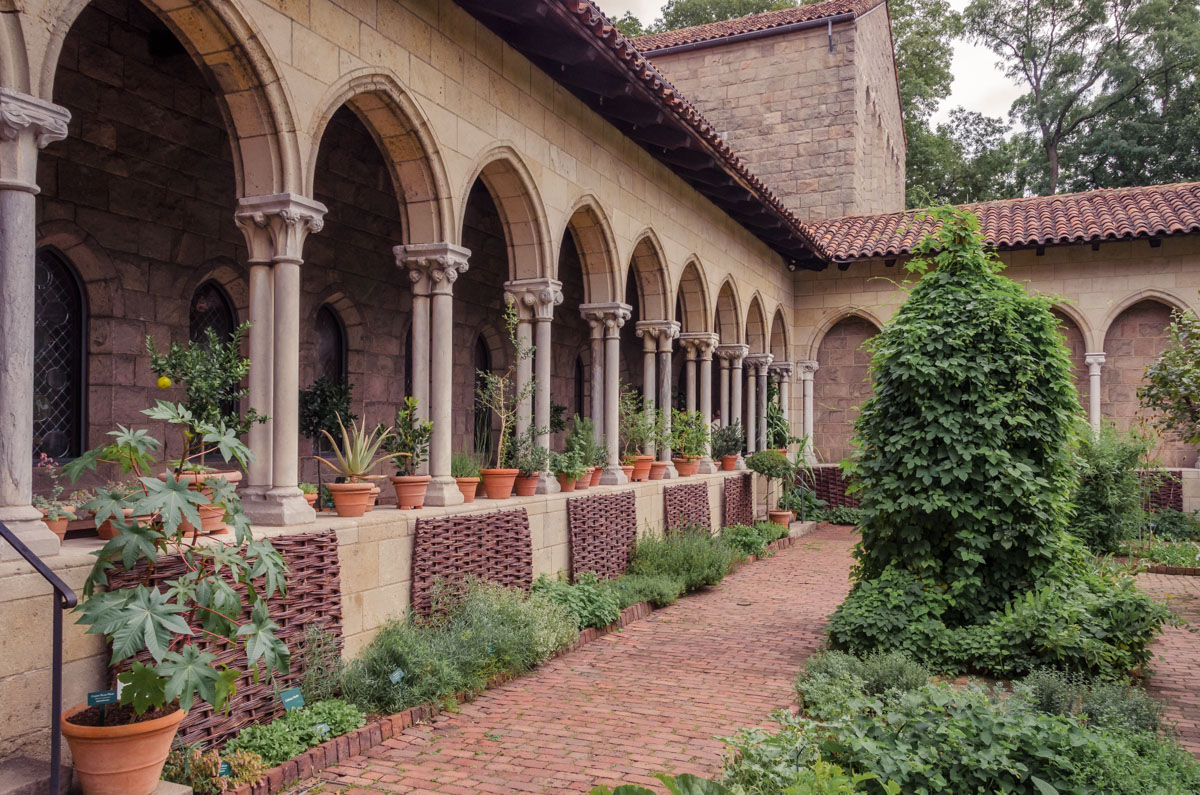 Cuxa cloister is the centerpiece of the museum. It comes from the Benedictine monastery of Saint-Michel-de-Cuxa in the northeast French Pyrenees, which was founded in 9th century and functioned for nearly 900 years. 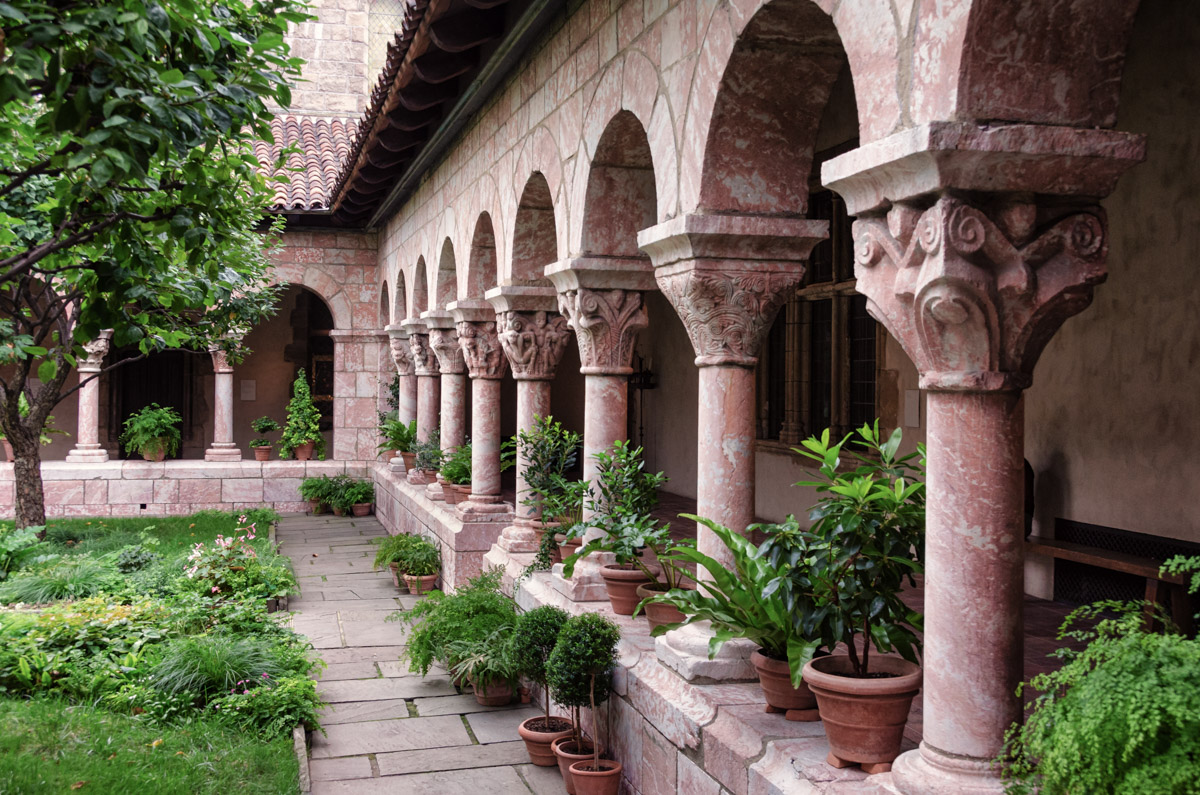 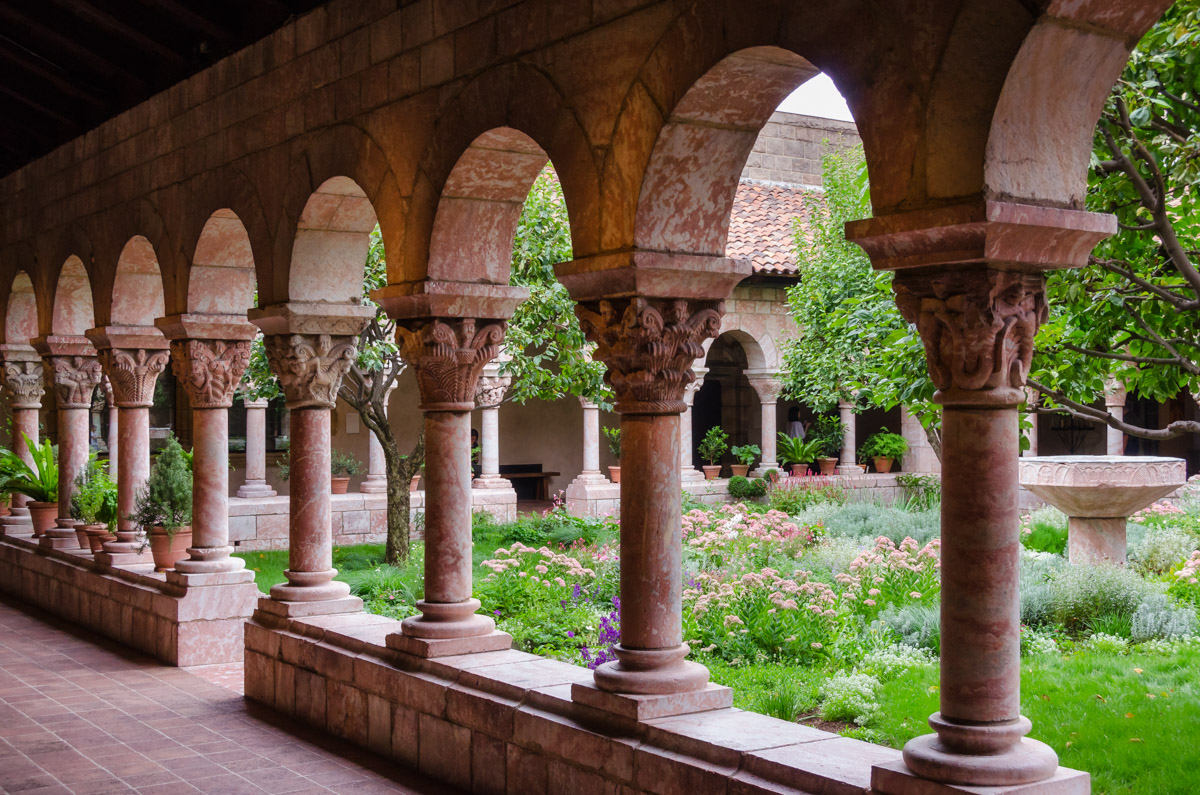 The pink marble column capitals are each unique in its design. 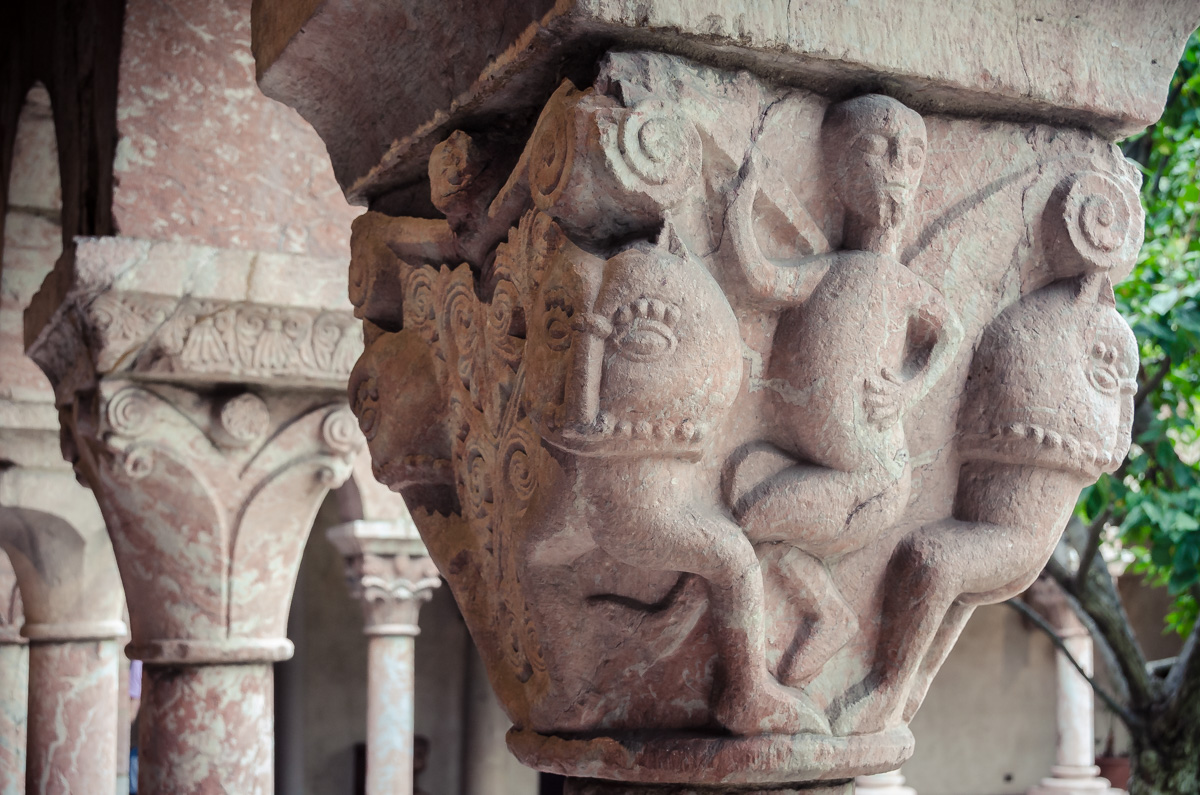 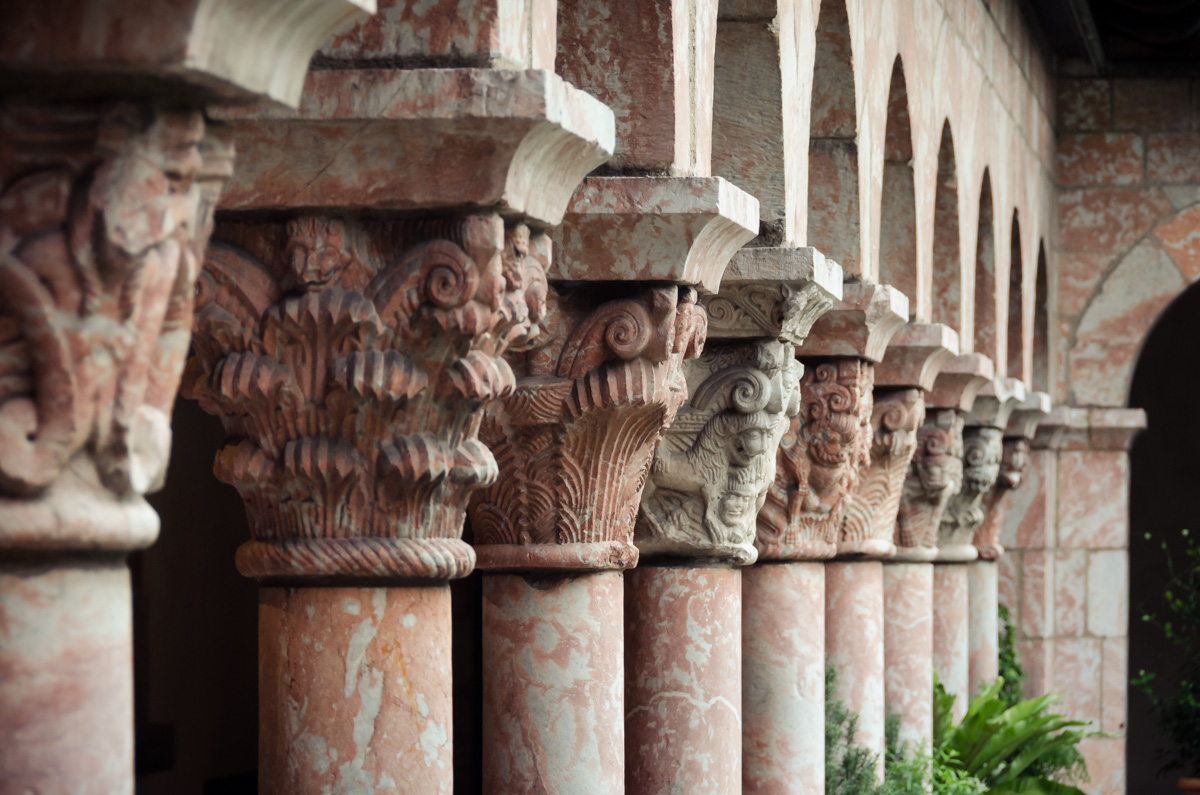 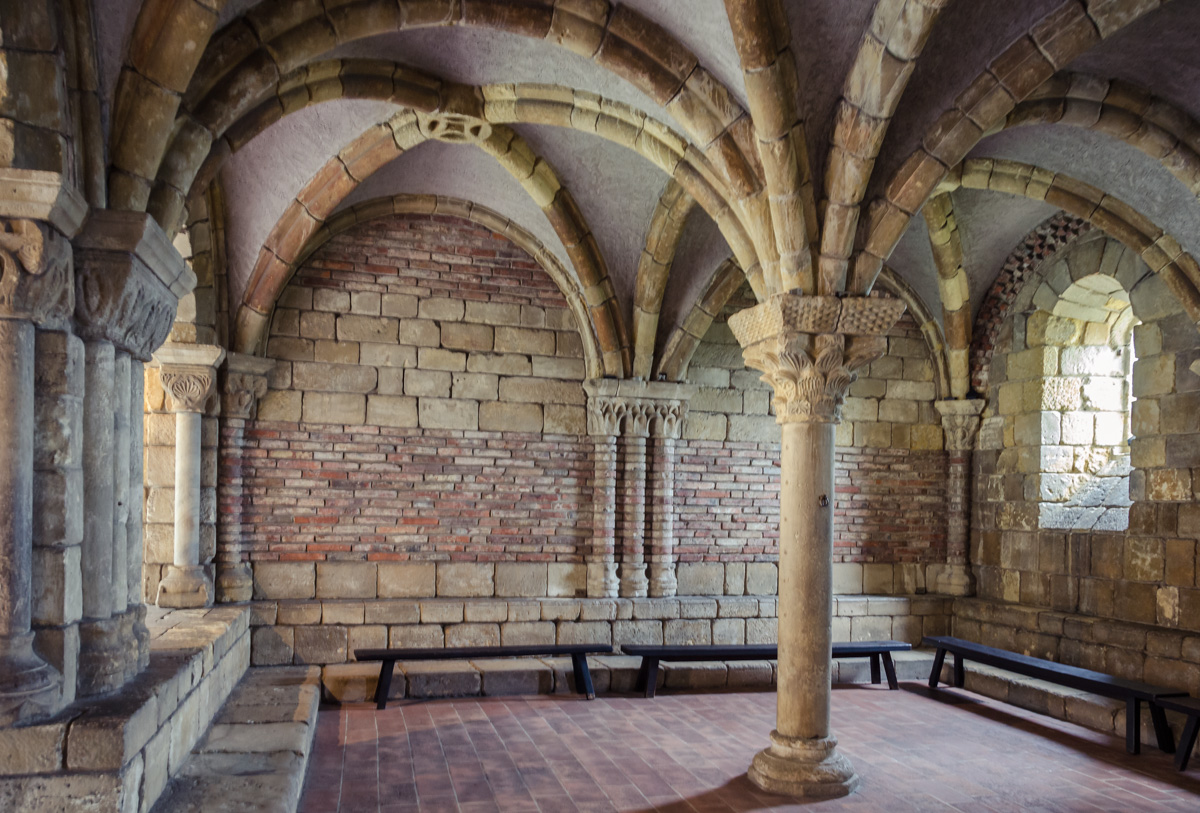 As with many reconstructions in the museum, its stonework comes from a neglected French church that dates back to the 12th century.

Saint-Guilhem cloister looks the newest and most sterile of the bunch, although some of the pieces used in its reconstruction belong to a building founded in 804, at the site of the later Benedictine monastery of Saint-Guilhem-le-Désert. Majority of stonework is from later dates in the 17th century. 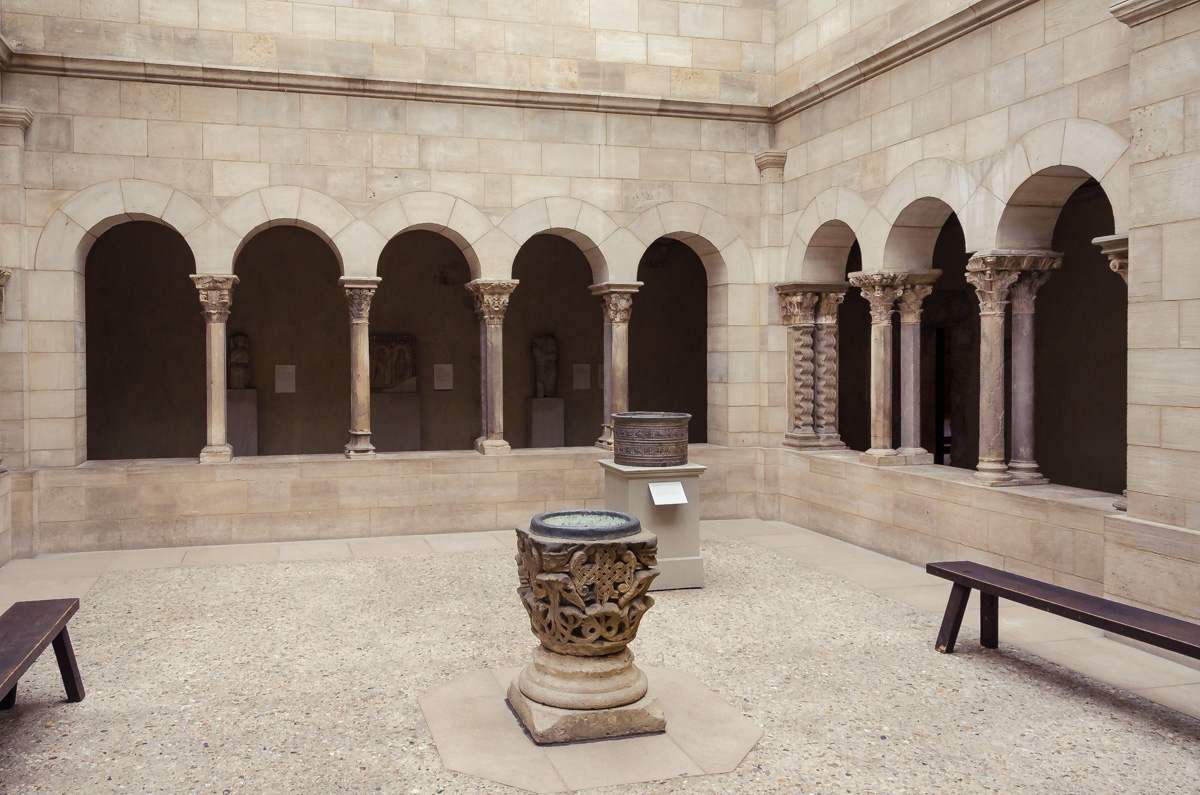 The columns are different here but no less exquisite in their individuality. 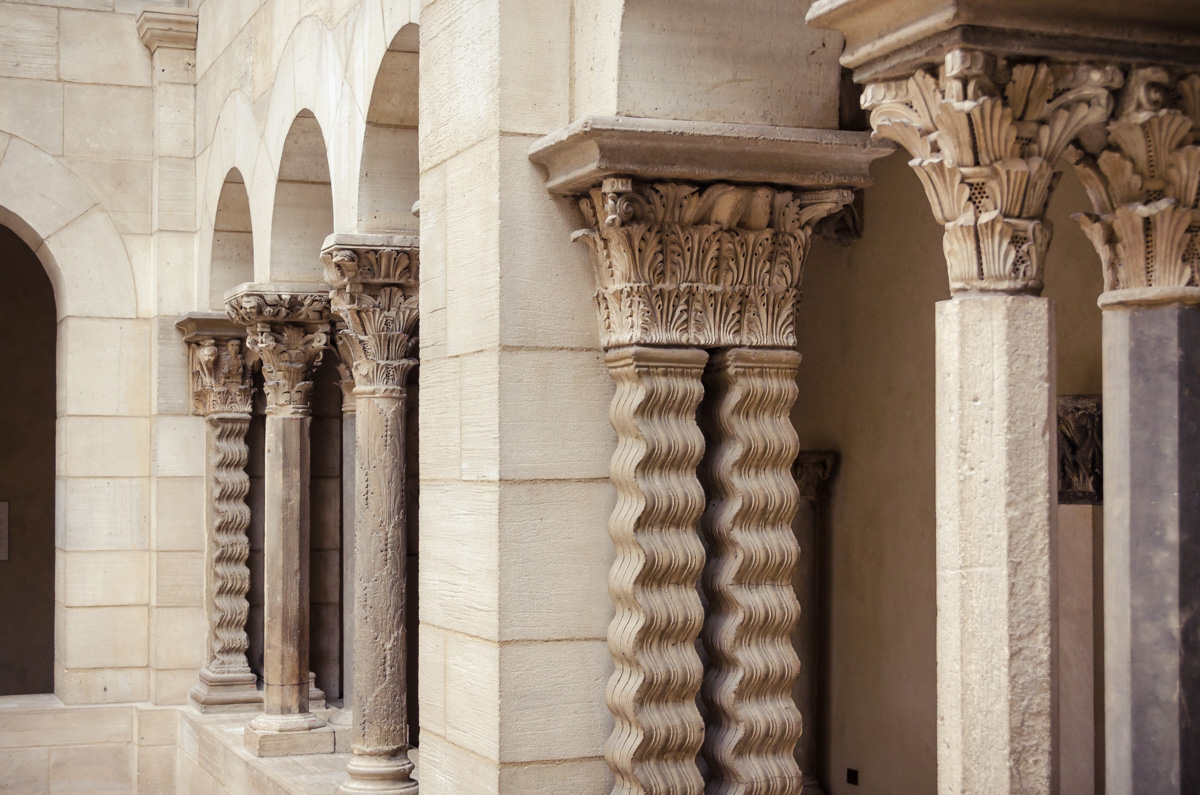 The cloisters are connected by a series of impressive spaces, chapels and exhibition rooms. Here is a view of Fuentidueña Apse, a semicircular Romanesque apse dated from the end of the 12th century, originally part of the San Martín church at Fuentidueña in Segovia. 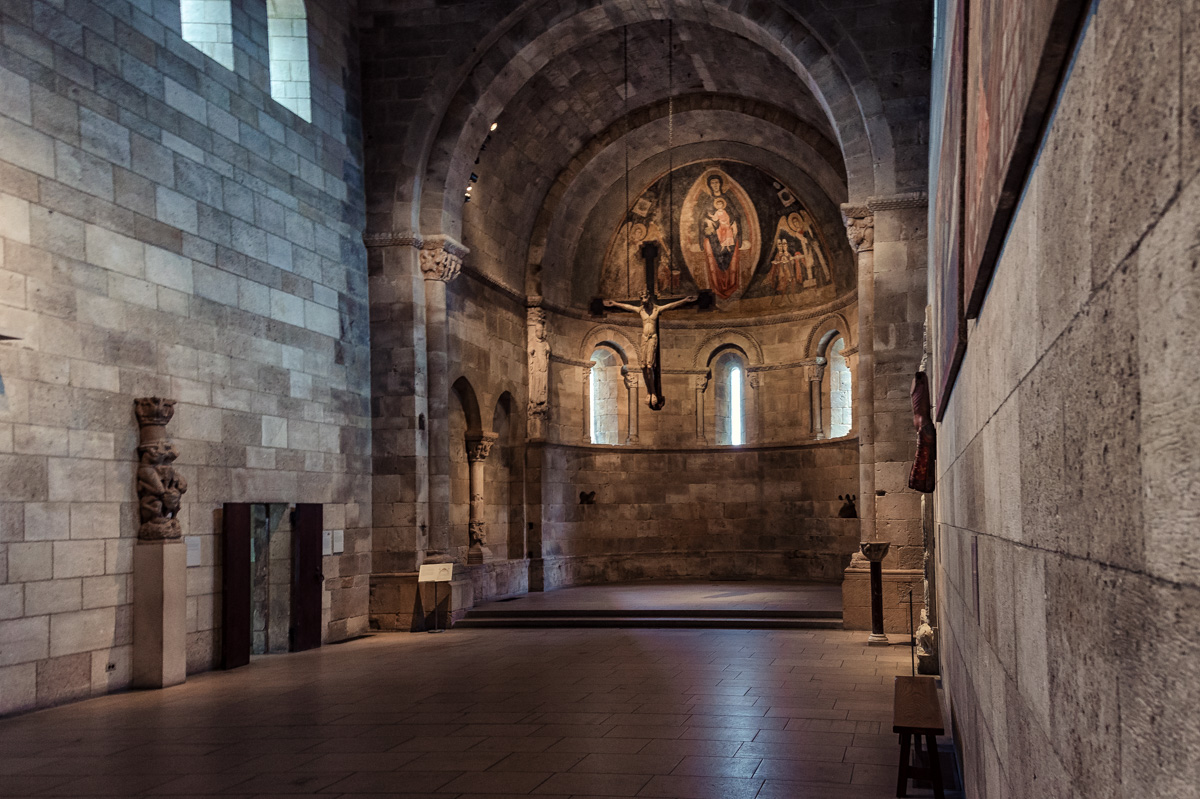 Here are examples of stained glass, both in its more traditional form in the Gothic Chapel as well as vignettes in the Glass Gallery. 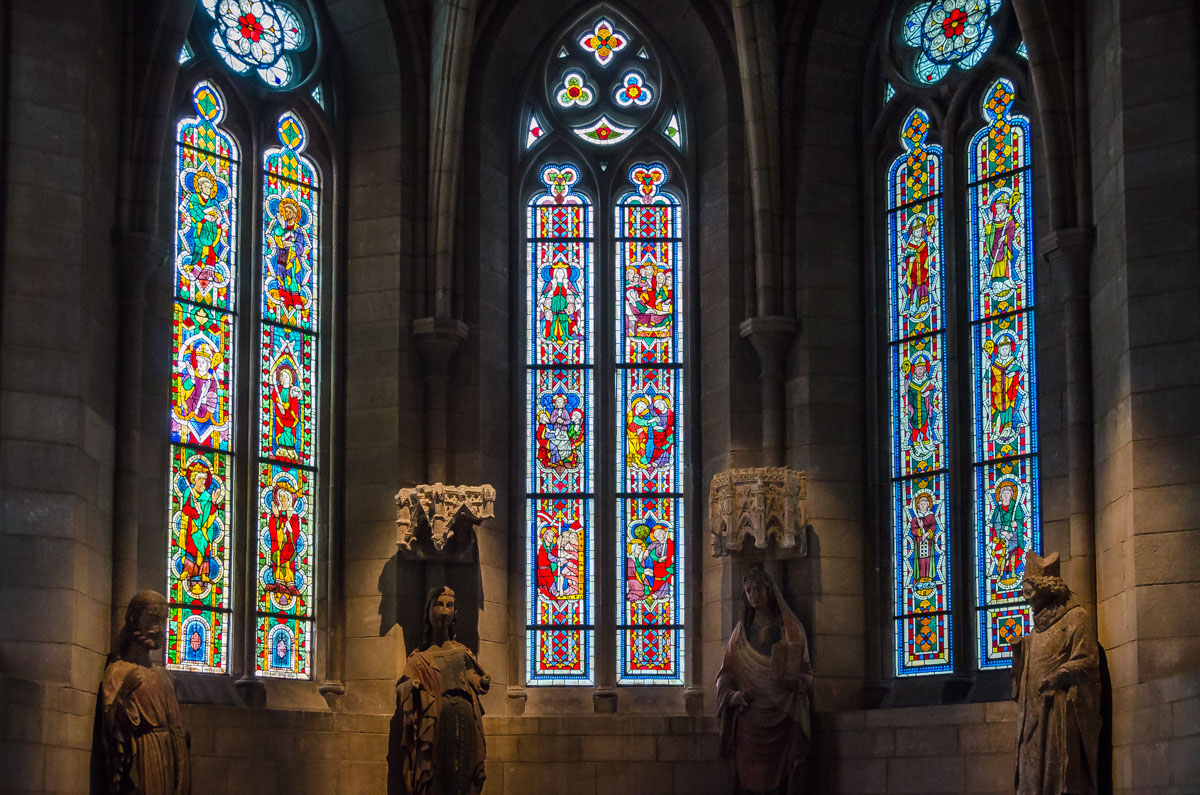 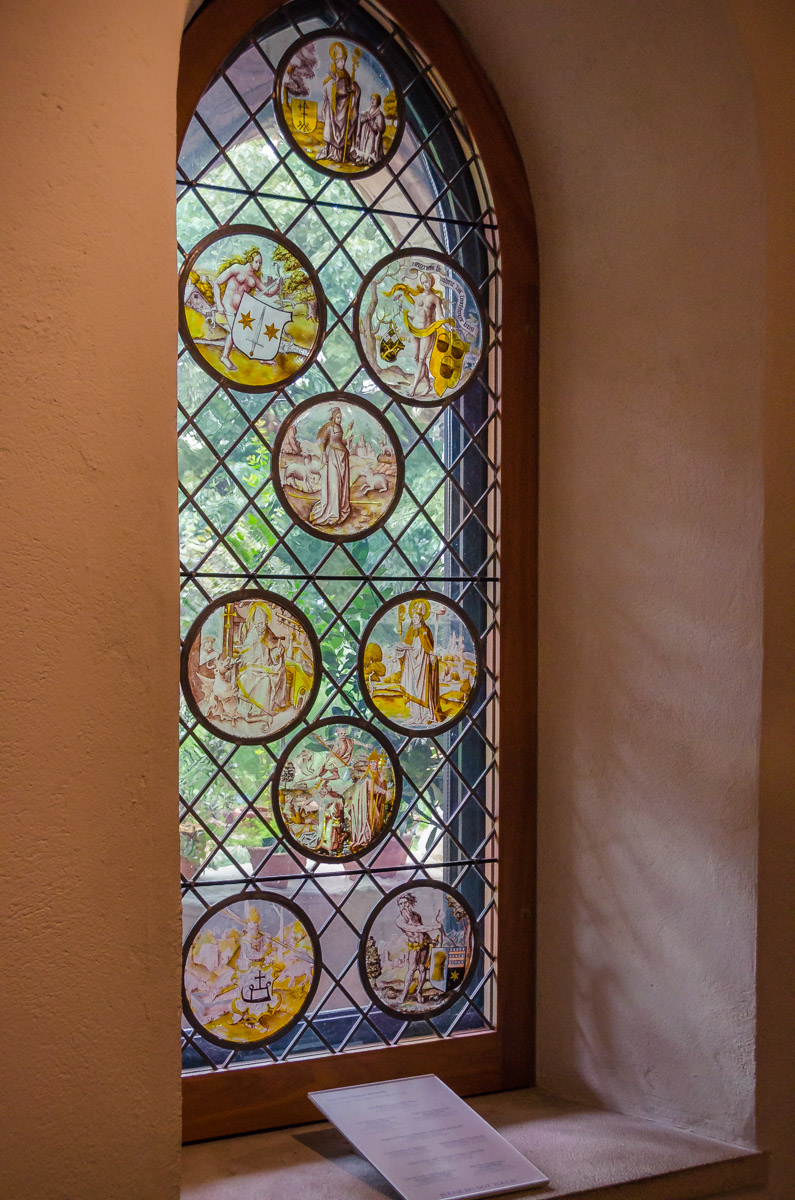 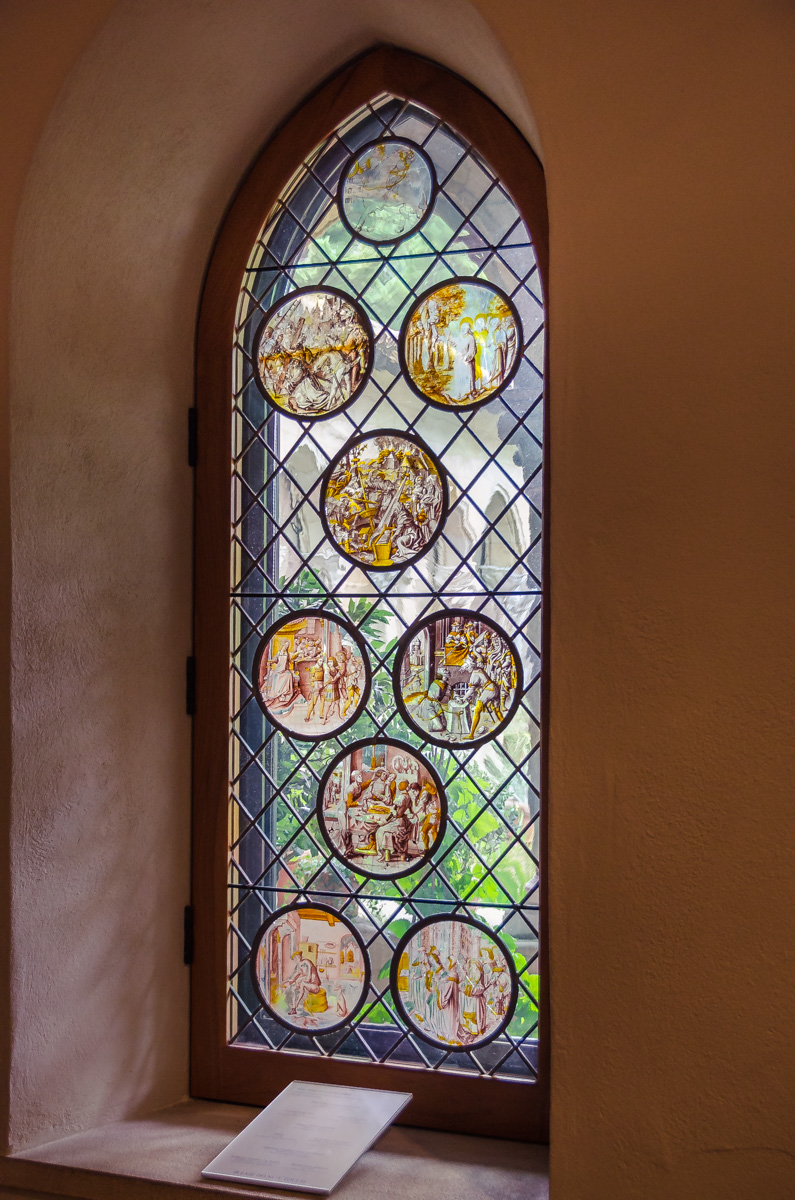 In the Unicorn Tapestries Room this fantastic fireplace anchors the display. 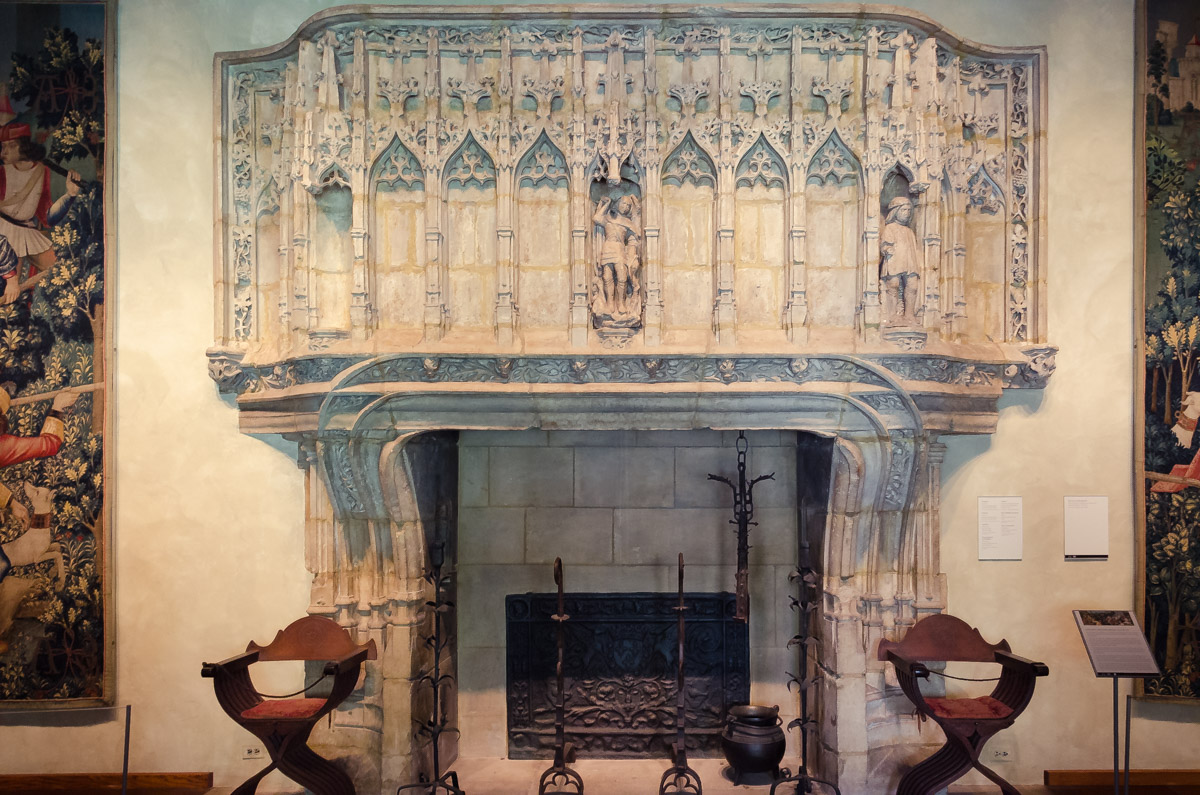 And here is one of the series of The Hunt of the Unicorn tapestries, end of the 15th century. 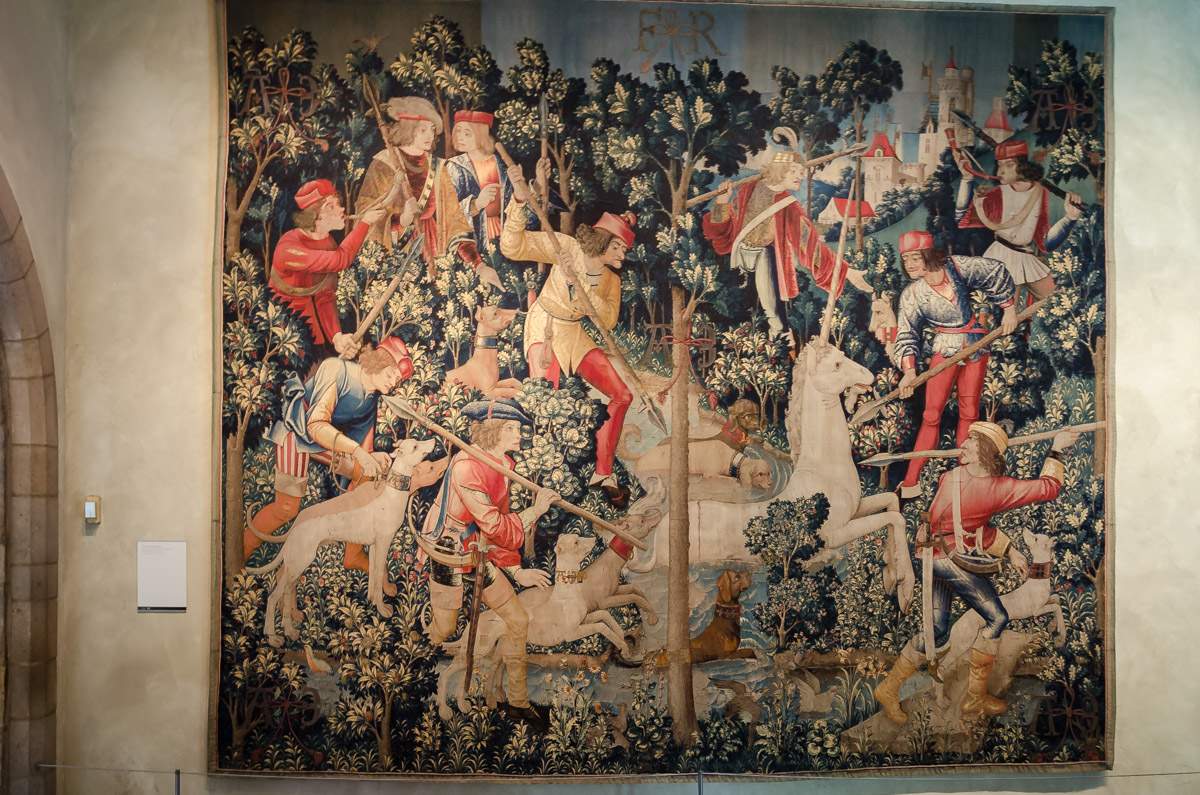 This ornate candle-holder in the Boppard Room holds a suitably massive candle. 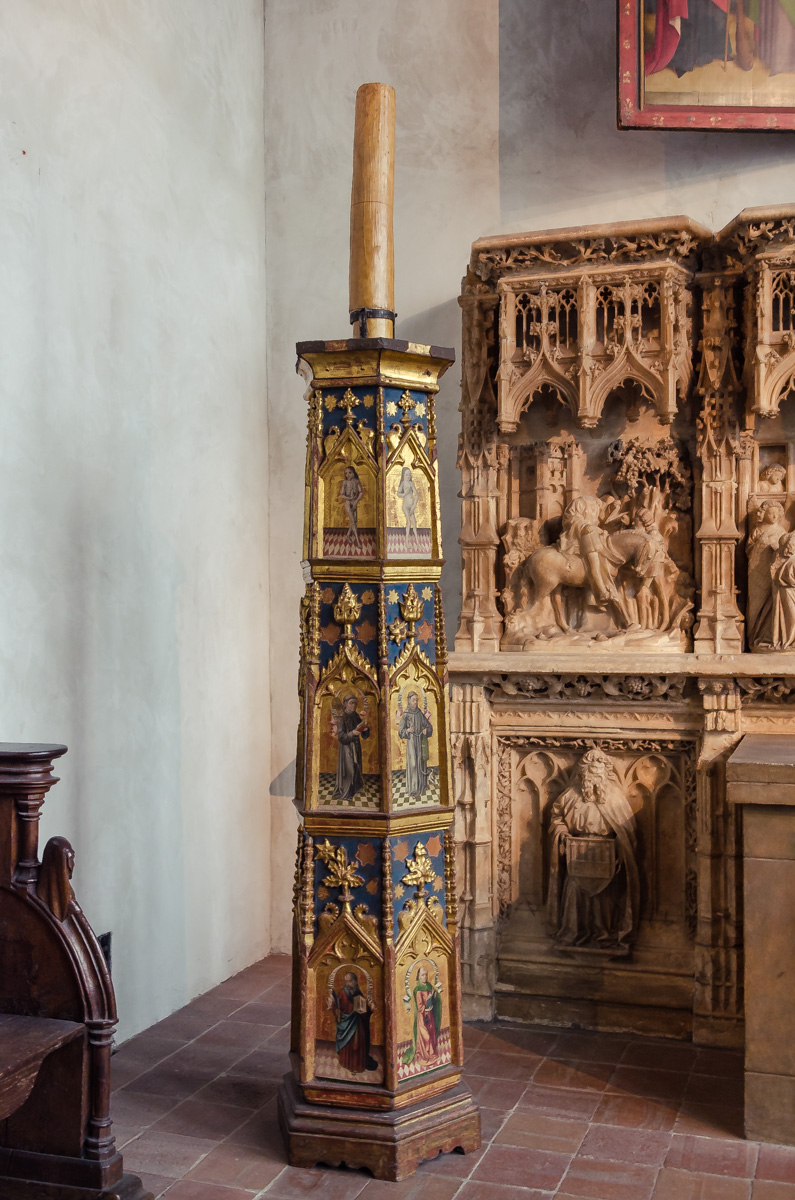 Also in the Boppard Room, the three head reliquarys look at the visitors with slightly disconcerting expressions. Probably fitting for something that is meant to contain the pieces of a saint’s skull. 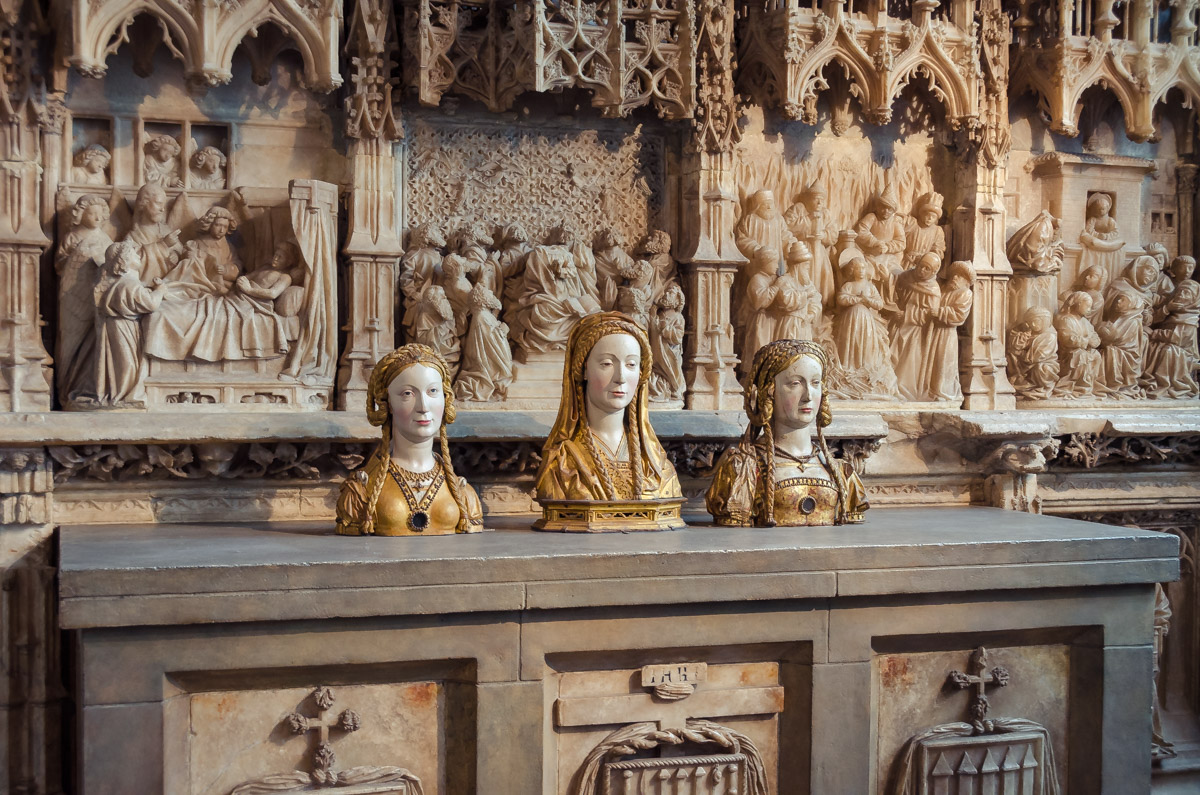 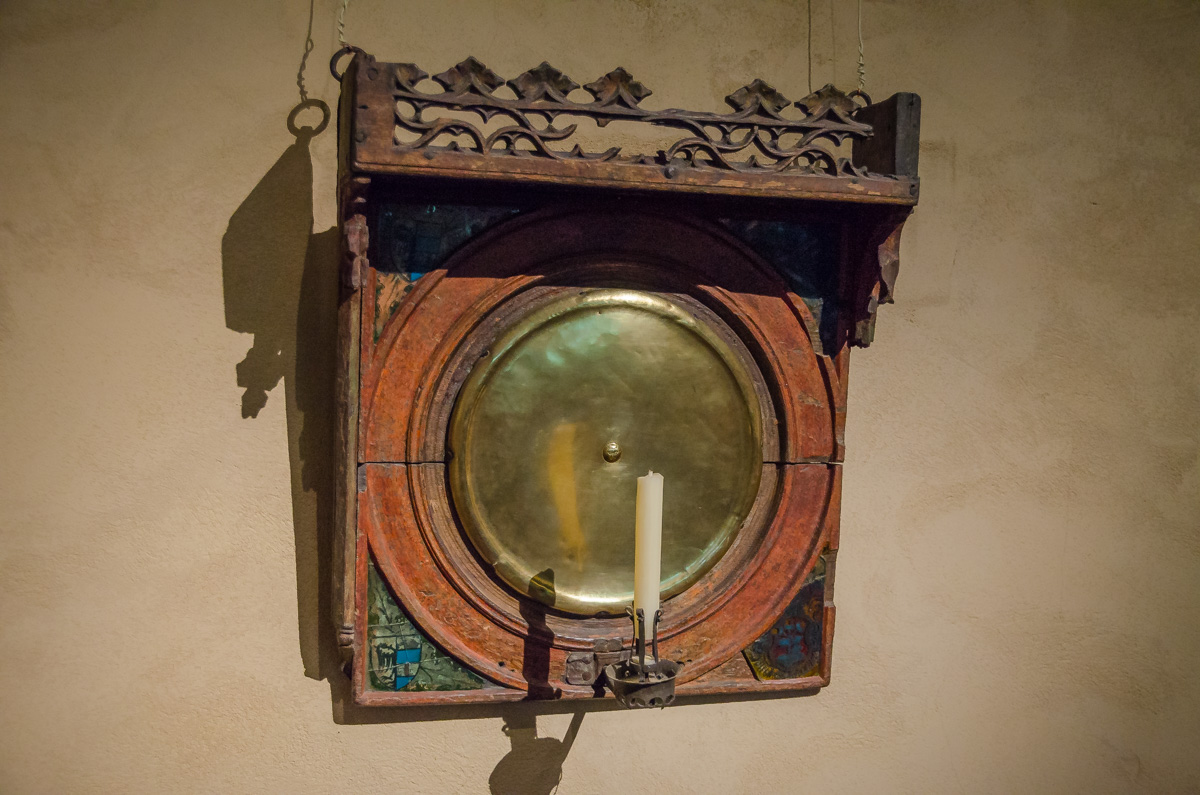 Animal decorations on the walls, both fantastic and real. 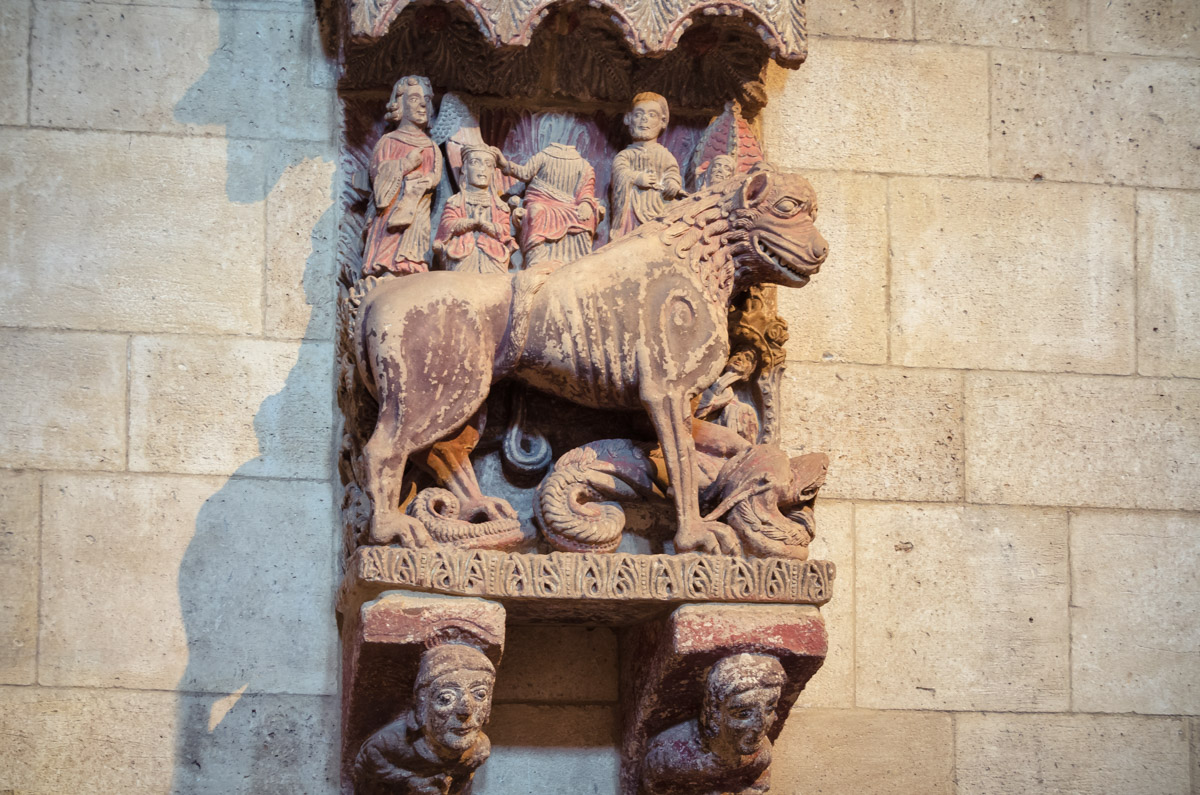 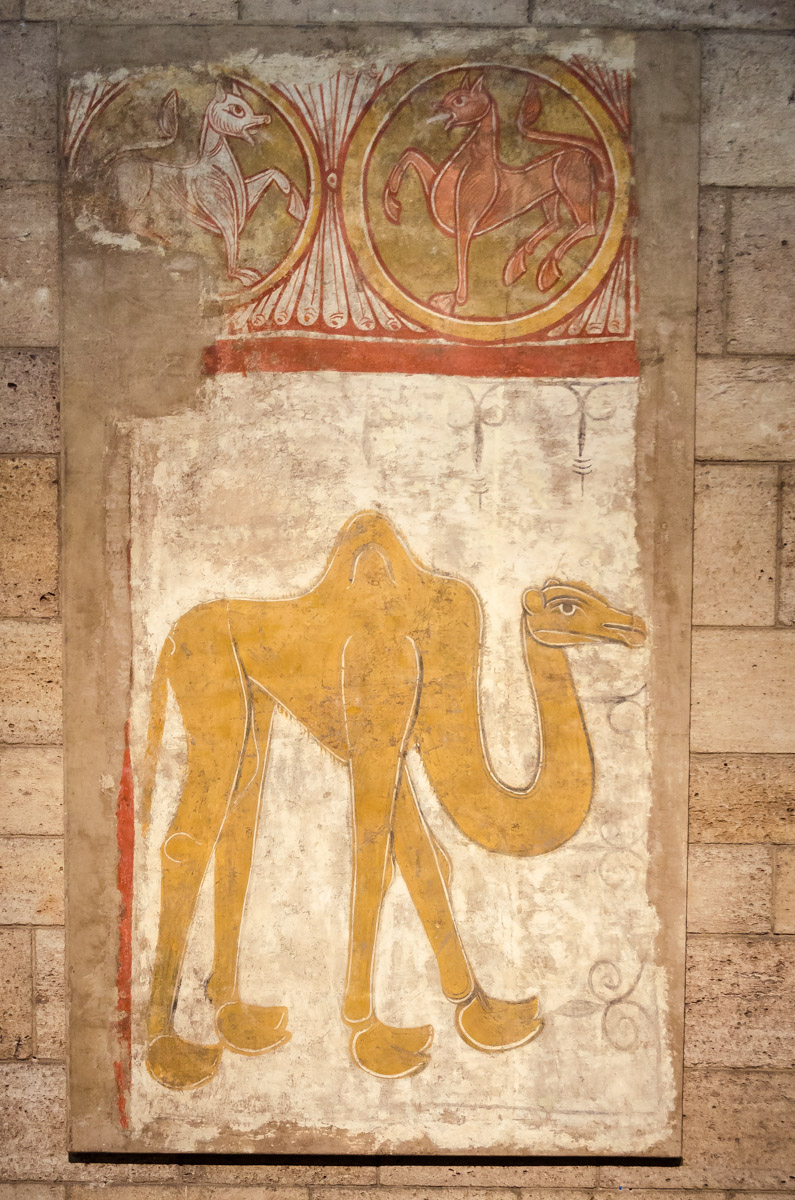 A couple of examples of the items displayed in the Treasury. The first one sports an angled mirror so that you can see the golden engraving on its bottom. 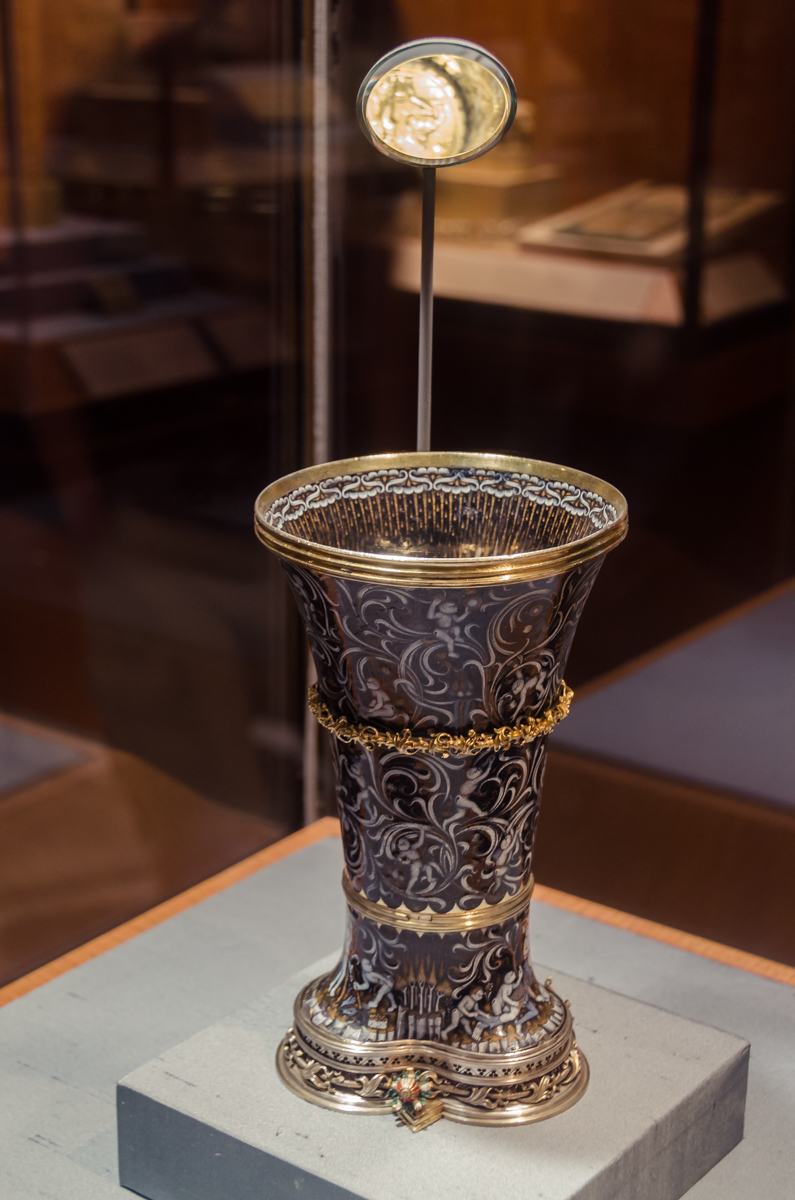 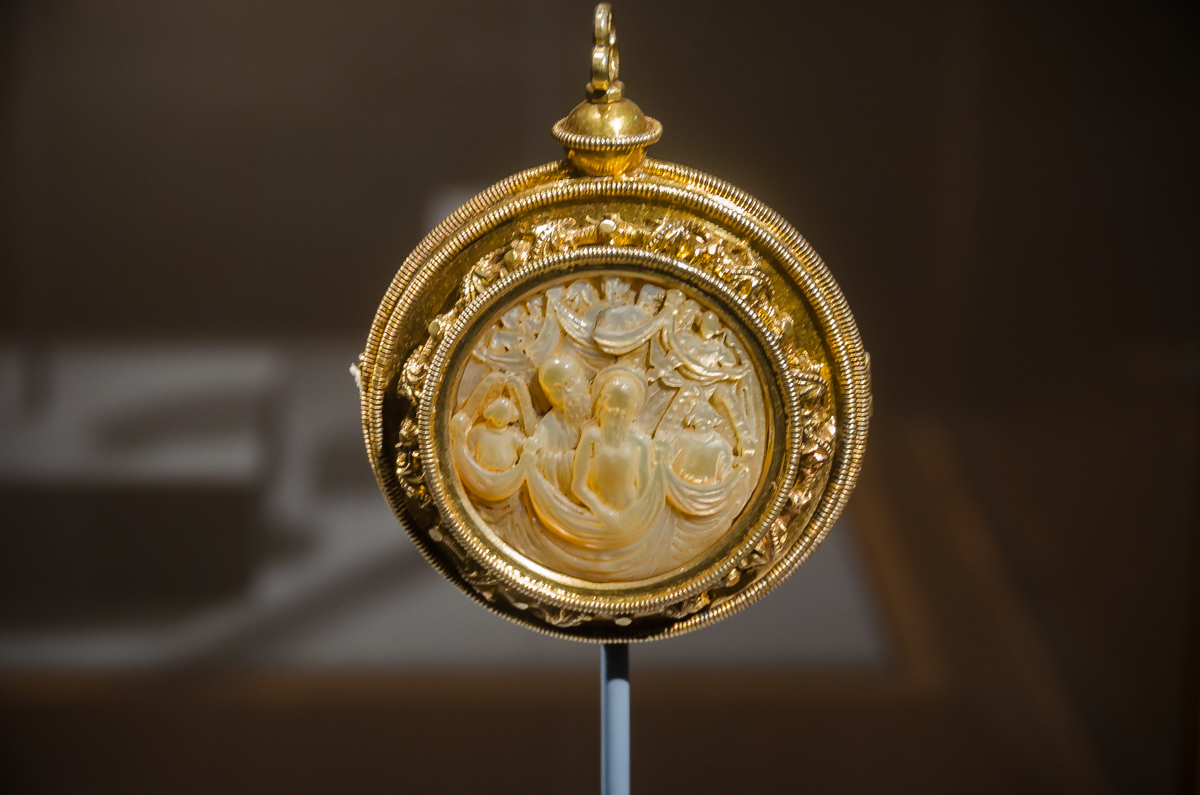 An aficionado of medieval arts and architecture can probably spend three to four hours perusing the collection, to say nothing of lingering at the cloistered gardens. The location may make this museum a less popular destination compared to other museums in the city, but the visit here is very worthwhile. 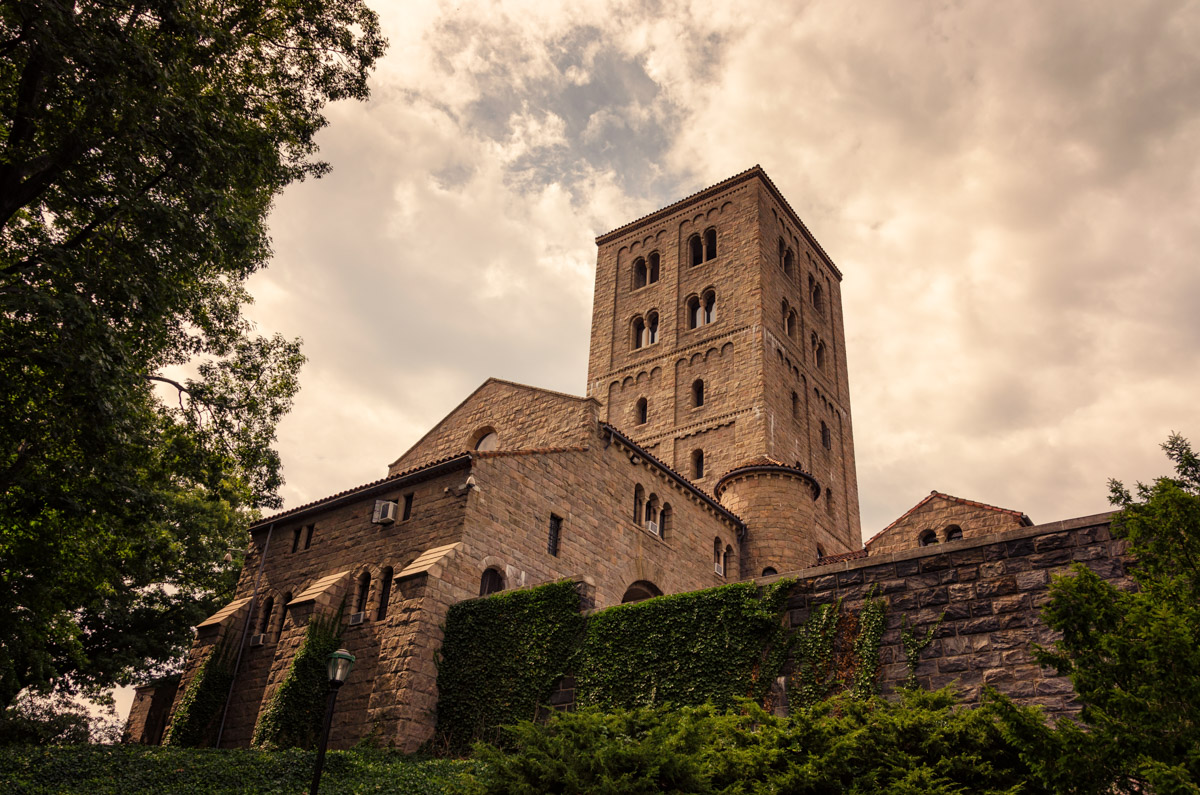