Charming is the word I would associate with Charleston first and foremost. The city has a number of impressive edifices and well-maintained historic mansions, but it is the simple charm of its streets lined with a mix of architectural styles that stays with you as the lasting impression. Here is a fragment of one of the most atmospheric streets in the heart of town, Tradd. 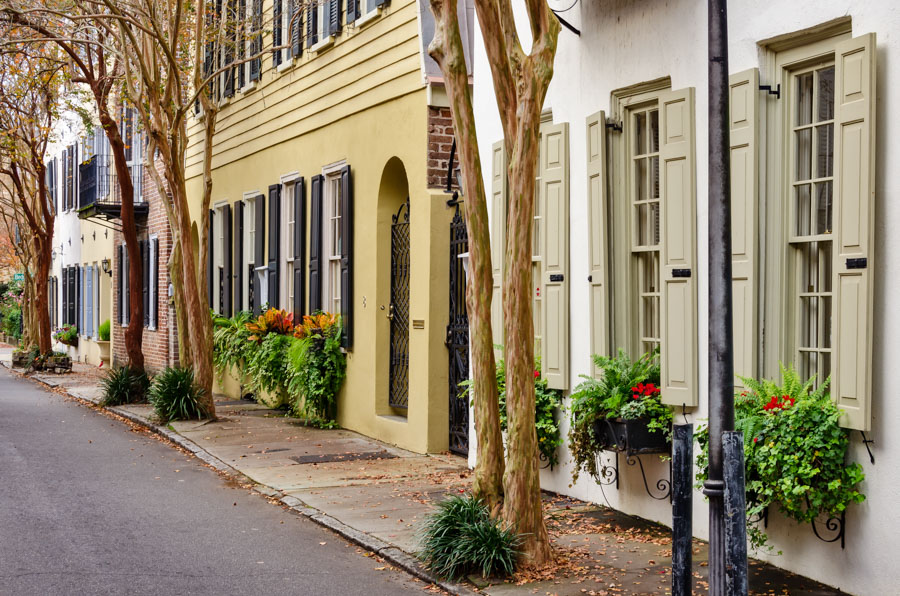 Some streets retain their cobblestone nature. 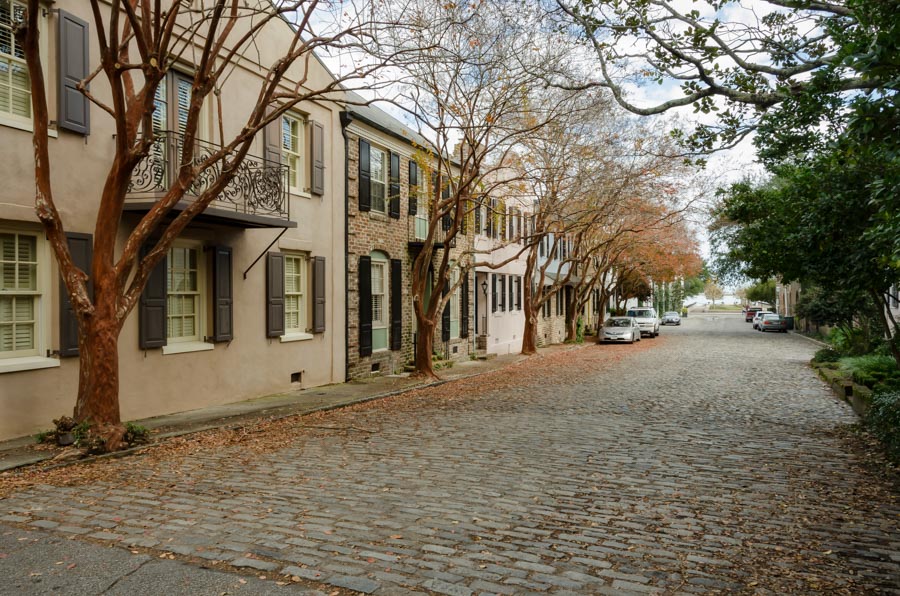 This block of East Bay Street is called “Rainbow Row”, for obvious reasons. 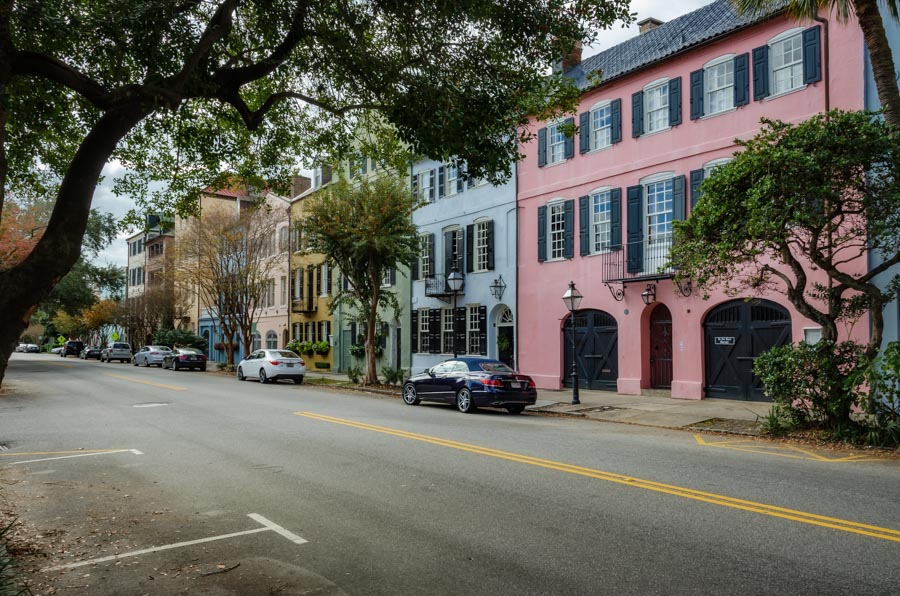 Eye-catching houses sit everywhere in the historically most desirable “South of Broad [Street]” part of the town. Here are a few examples. 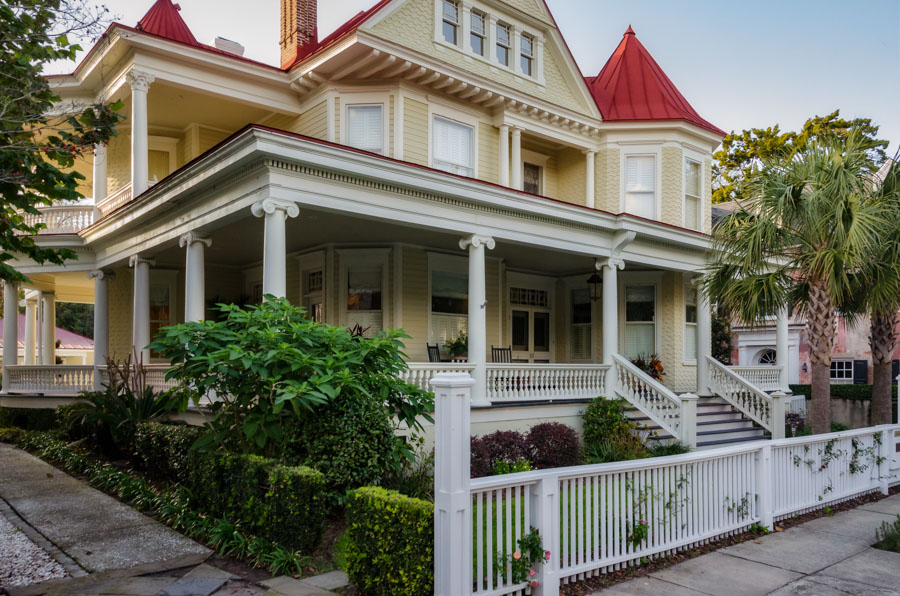 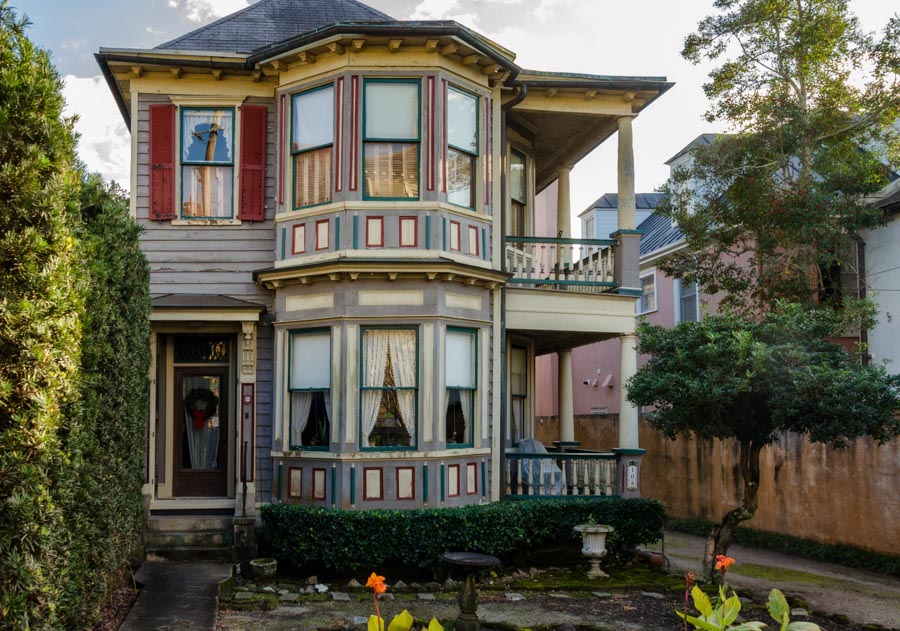 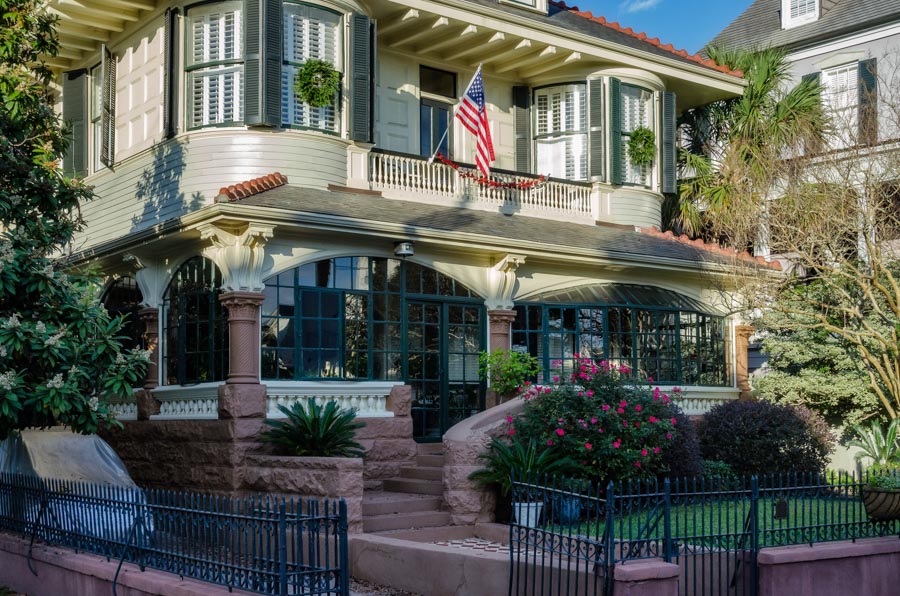 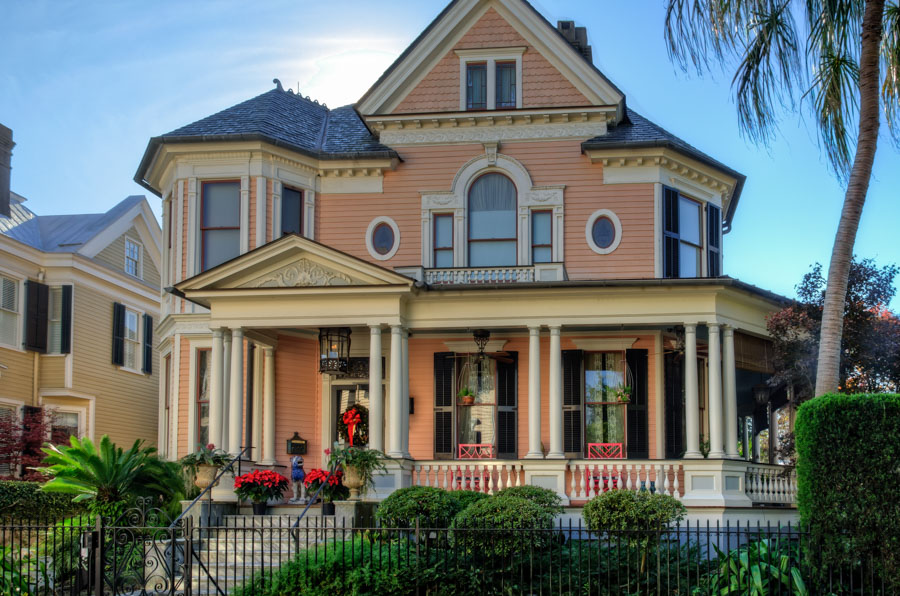 The above were all examples of Queen Anne architectural style which, along with Italianate-style villas, accounts for the most exuberant buildings. The other prevalent style, Federal, produced primarily flat rectangular façades that were sometimes painted in bright colors. 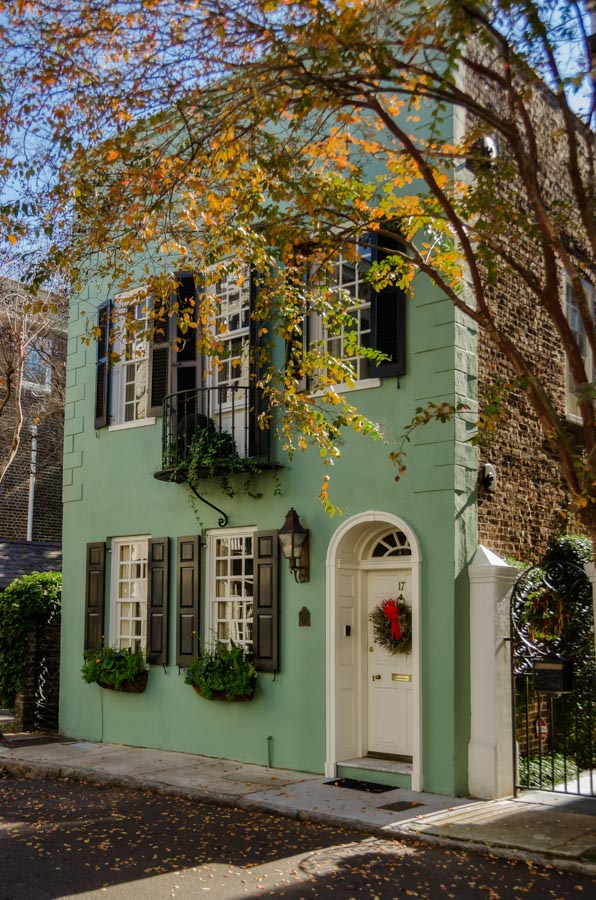 House numbering in Charleston offers a couple of quirks. Some streets have buildings numbered 0. More frequently, the houses are numbered with “and a half”. 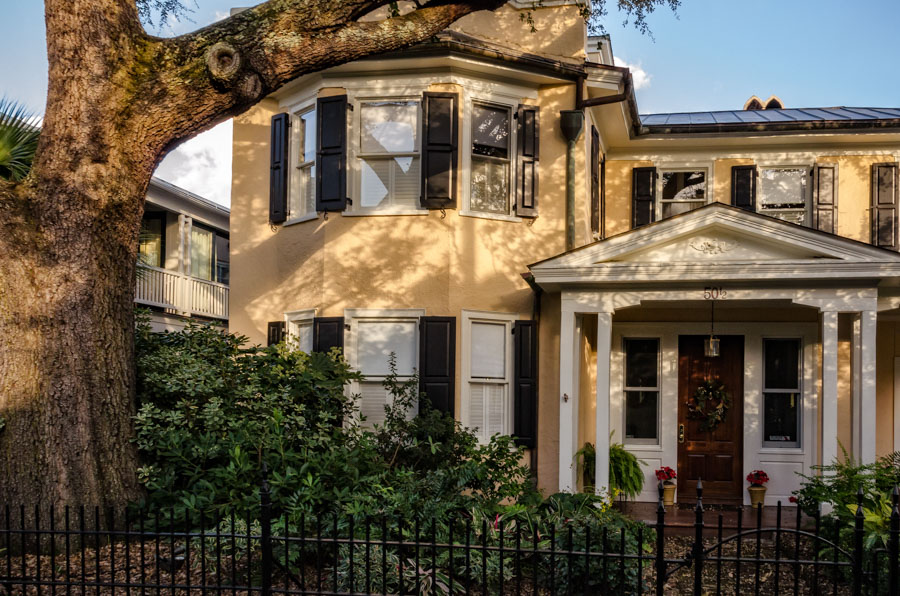 One of the defining features of Charleston mansions are multi-level side porches called piazzas. The ground-level piazza acts as the actual entry to the house, with a “privacy door” connecting it to the street. The second-floor piazza may not always remain an open-air space, as it was historically designed to be, but it retains its major function as a substitute for a patio or a deck that we use in our northern abodes. 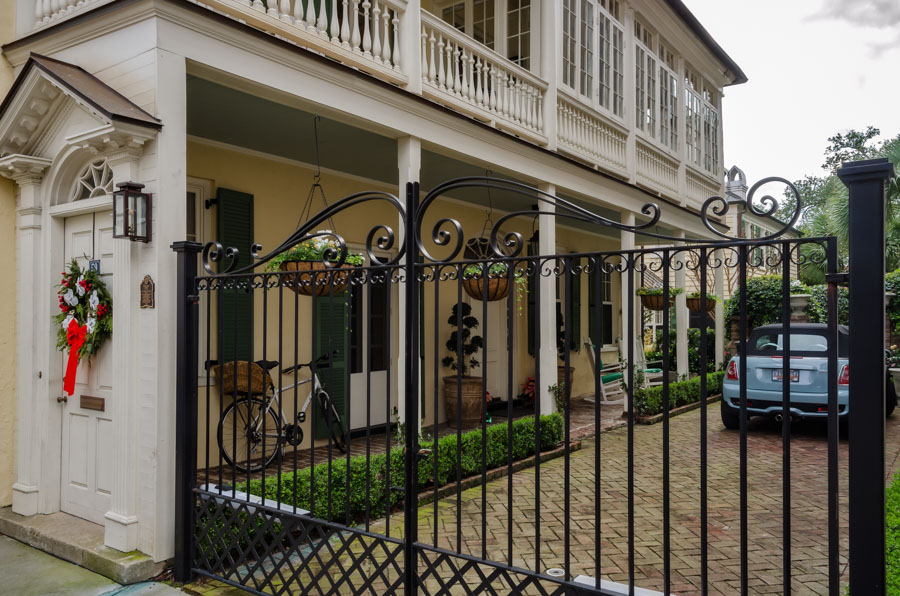 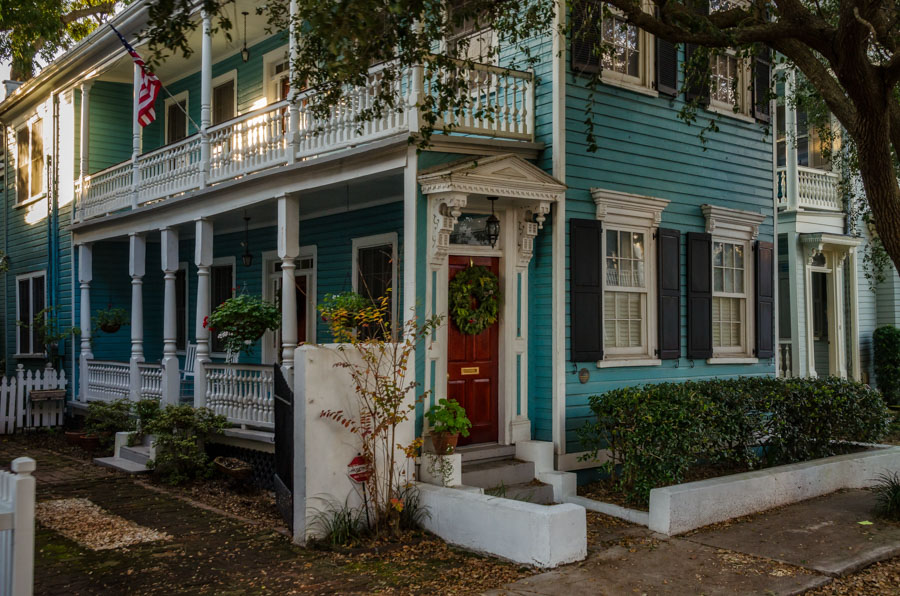 At one of the historic mansions, Edmondston-Alston House, we stepped out on the piazza. 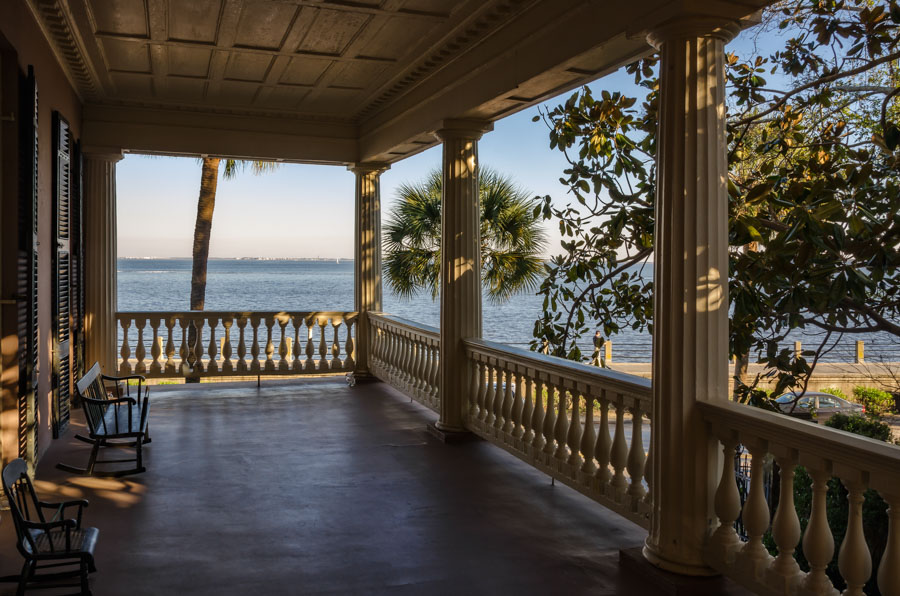 Palmetto trees and pineapple statuary are a common ornamentation of the Charleston landscape, able to make even the most sober Federal-style building look festive. The pineapple, of course, has been the symbol of hospitality since early American colonies. 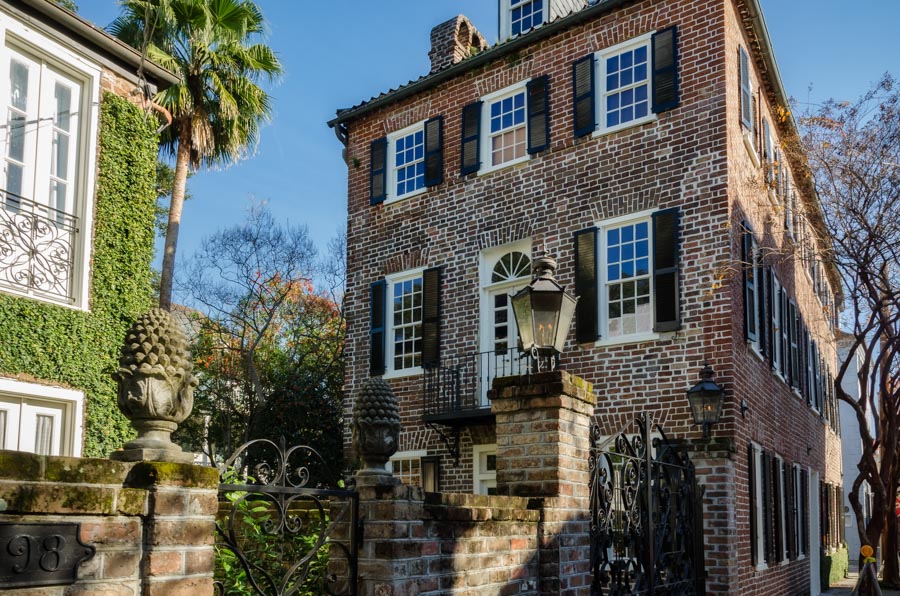 Intricate ironworks is another magnificent highlight of many a house, such as this beauty on Broad Street. 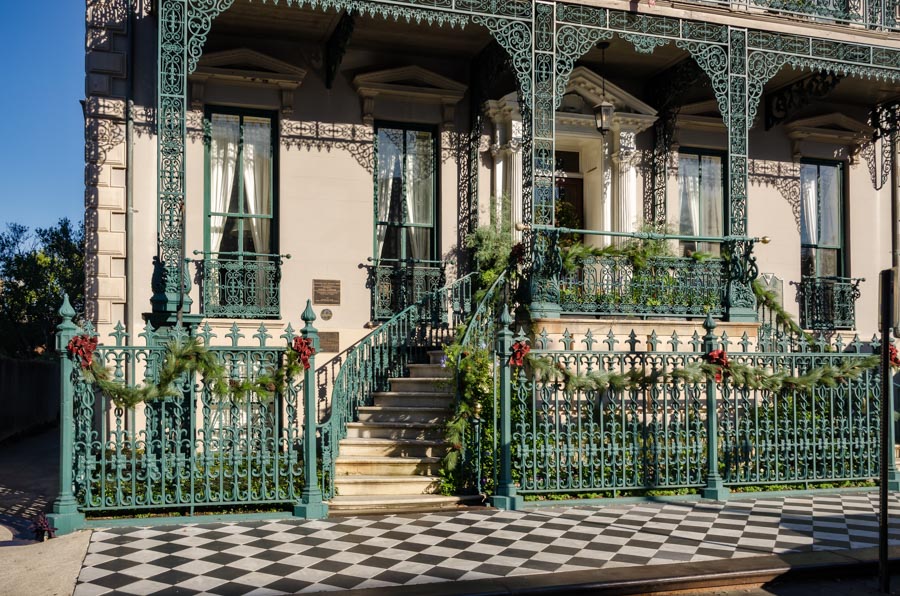 The narrow passage to the back garden is not a very common occurrence in this specific archway form, but it is nonetheless emblematic of narrow back alleys that permeate the historic part of town. 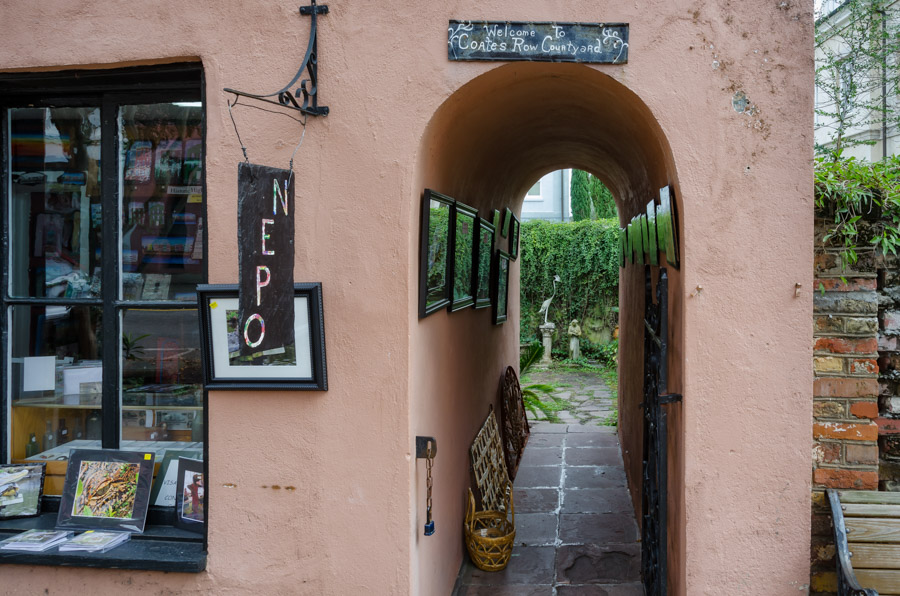 Gas lamps that are kept alight even in daytime is a delightful – if seemingly a tad bit wasteful – feature. 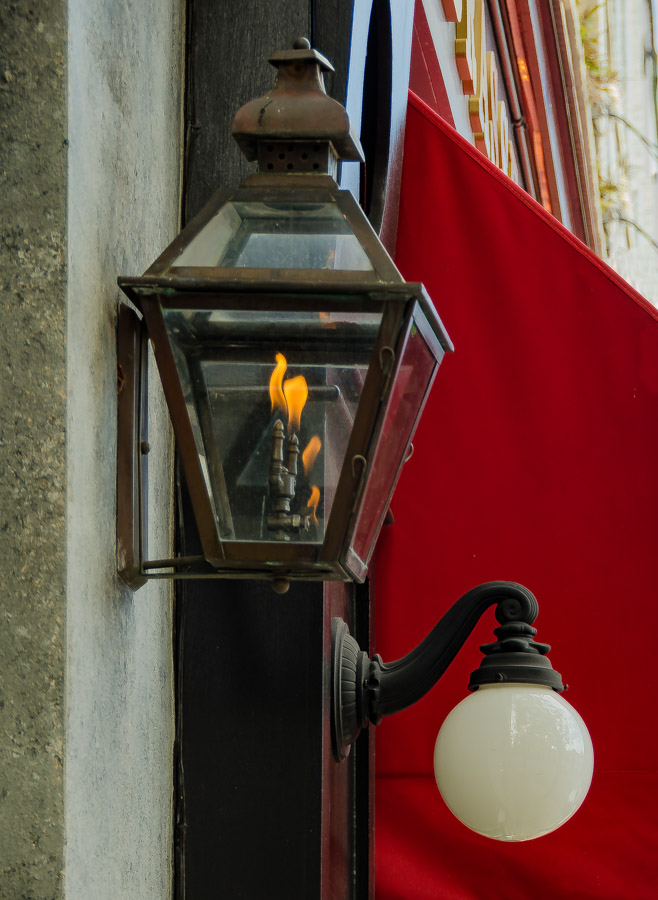 I liked the look of the free-standing clock on King Street and noticed only in post-processing that the “No parking” sign next to it expressly designates a rickshaw stand. 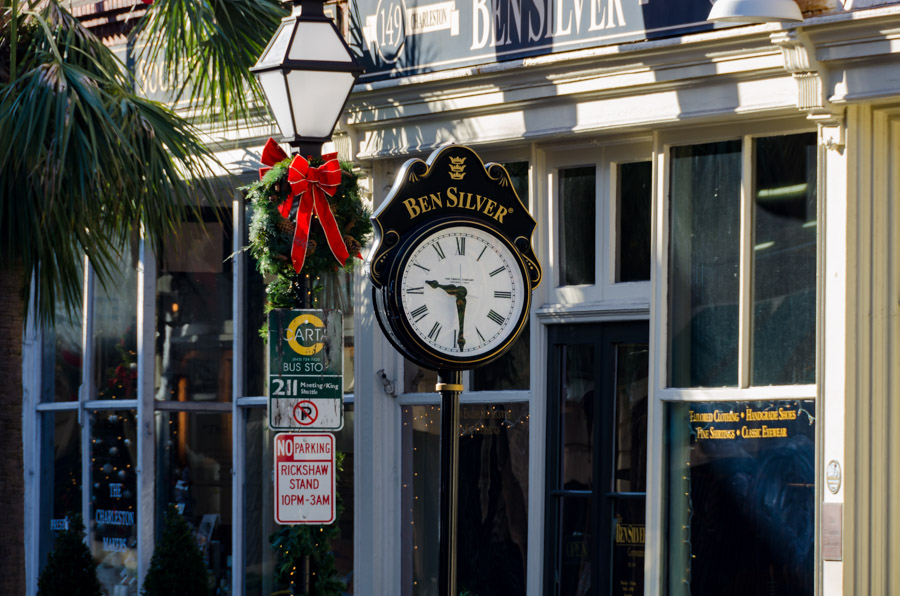 Elsewhere is town, you can come upon these colorful modes of transportation. 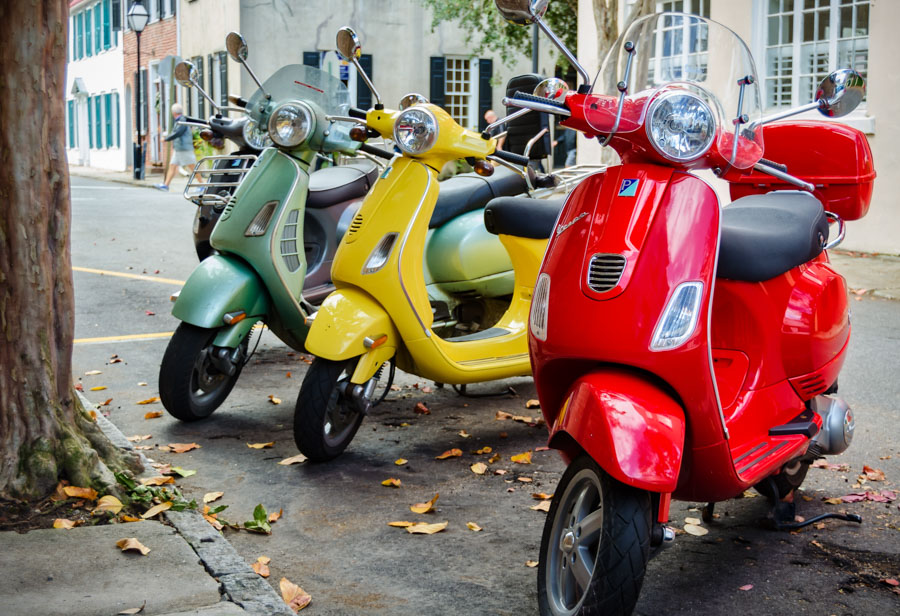 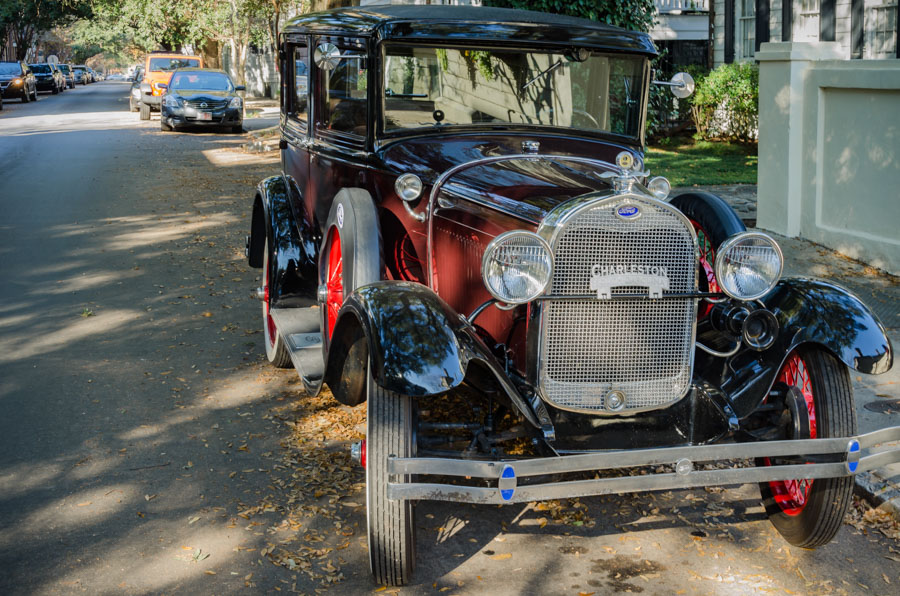 Nighttime shots did not figure prominently on our walks around Charleston, but here is a reasonable one, of the St Philip’s Church. 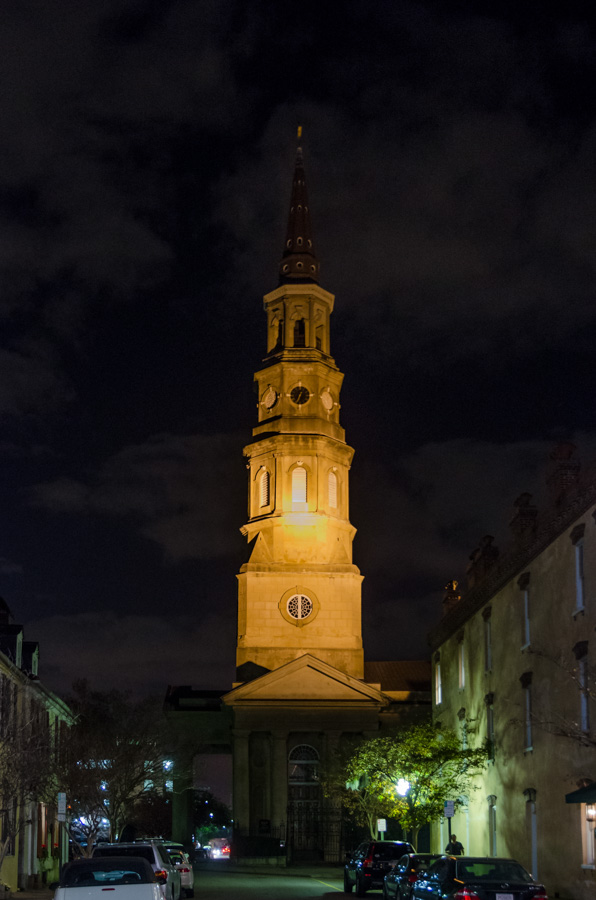 And finally, a couple of shots from the Waterfront Park, first along the bank of Cooper River and then in the opposite direction, towards the pineapple fountain at the heart of the park. 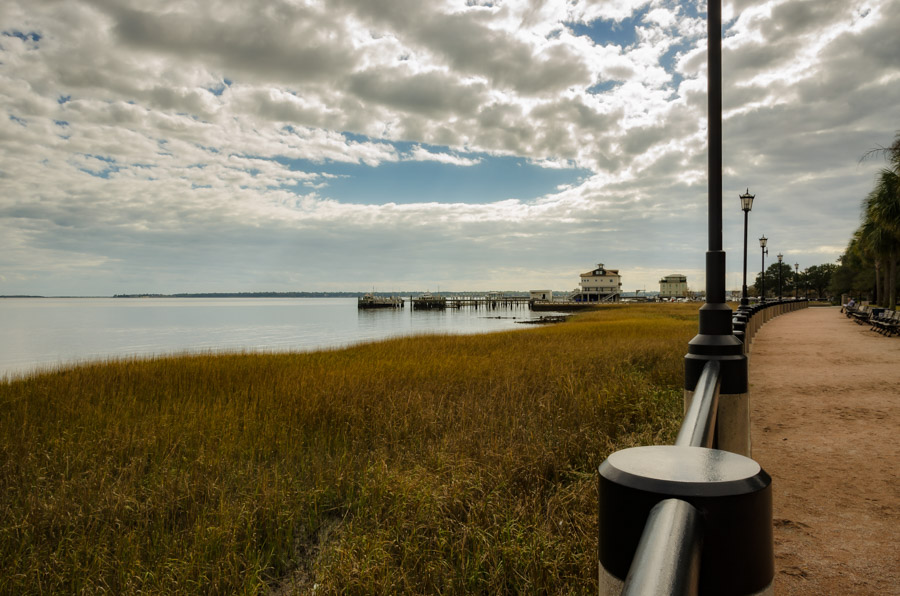 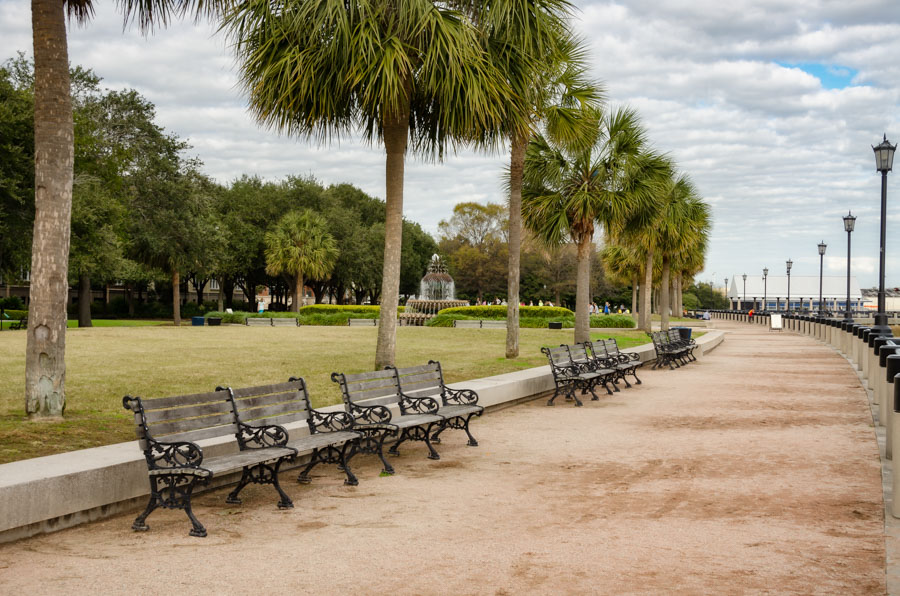 A gem of a colonial town, highly recommended for anyone.

These and other Charleston pictures can be found in a Flickr album.