As people who have been following this blog for a while might be aware, we have seen our share of royal palaces all over Europe. Some impress us more, others less so. Because we started practically with the grandest of them all – Versailles – one might argue that we had set ourselves up for being underwhelmed ever since. Nonetheless, we continue to make royal palaces an important part of our sightseeing itineraries. And the latest one we saw definitely falls into “wow” category.

Drottningholm Palace is among the palaces built in the 18th century that were inspired by Versailles. Its UNESCO description does not exceed even 50 words and simply calls the palace and gardens complex the finest example of a royal residence. We had an opportunity to see all named parts of the complex and we certainly concur with that laconic assessment.

Here is a perspective of the palace from its formal gardens area. 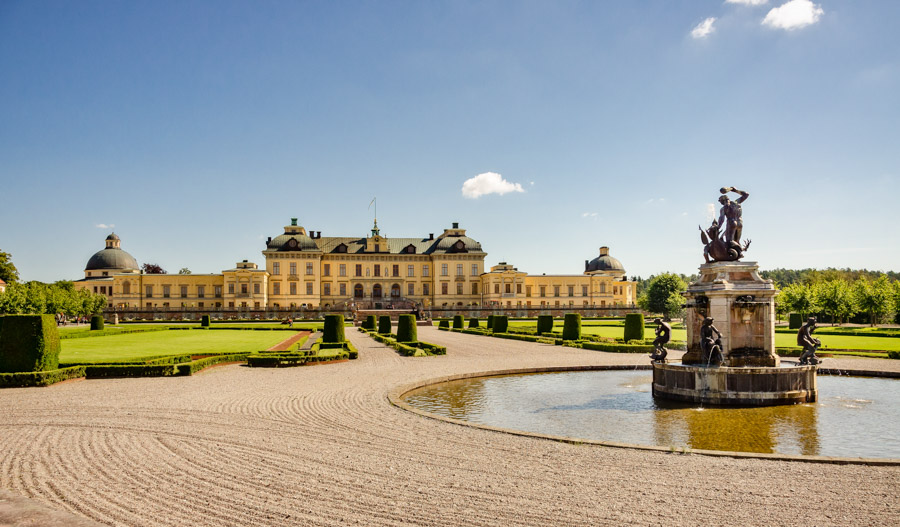 Inside the palace, one can find a progression of impressive rooms, some more obviously homages to Versailles’ opulence than others. 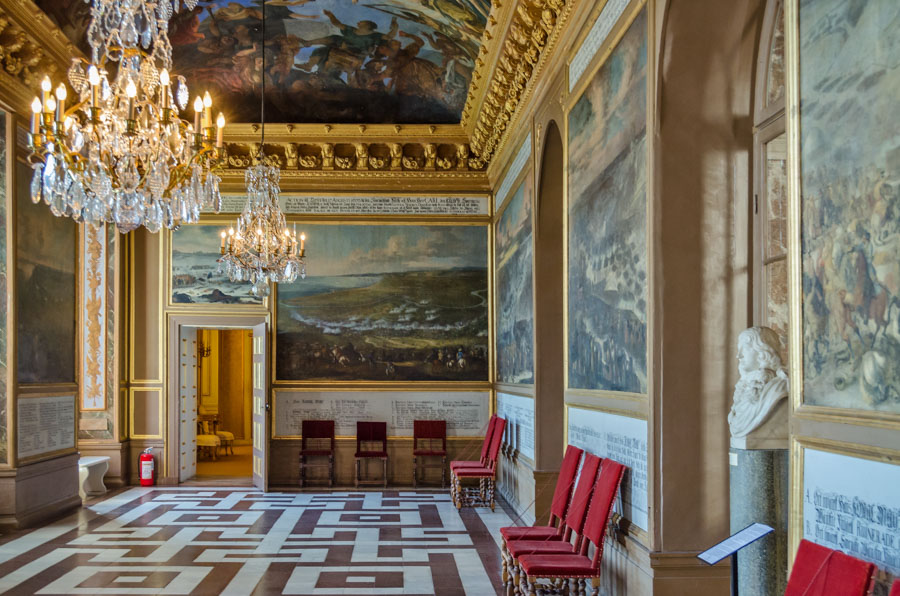 For a bookworm, the library always holds an extra dose of fascination. 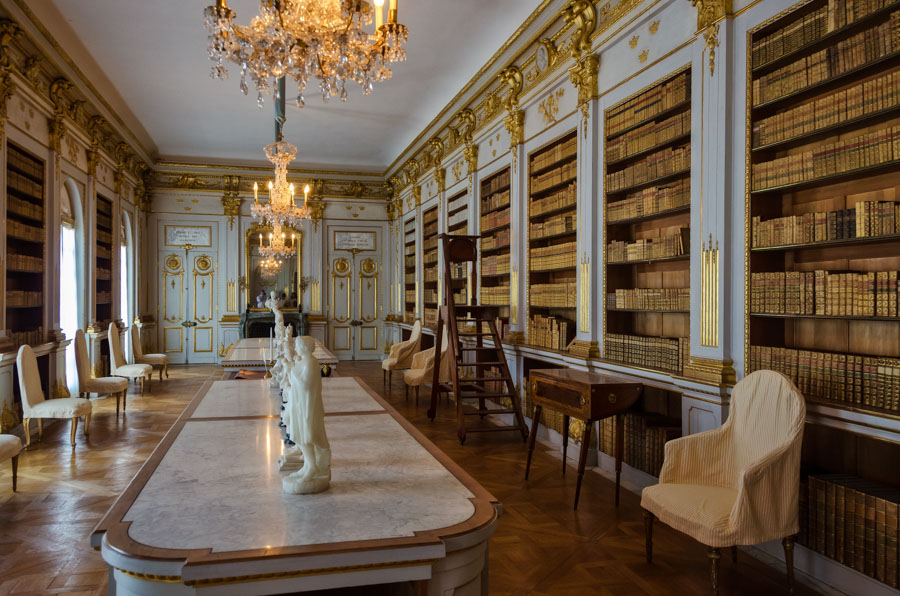 The royal guards at the palace are attired in the most blindingly blue uniforms. 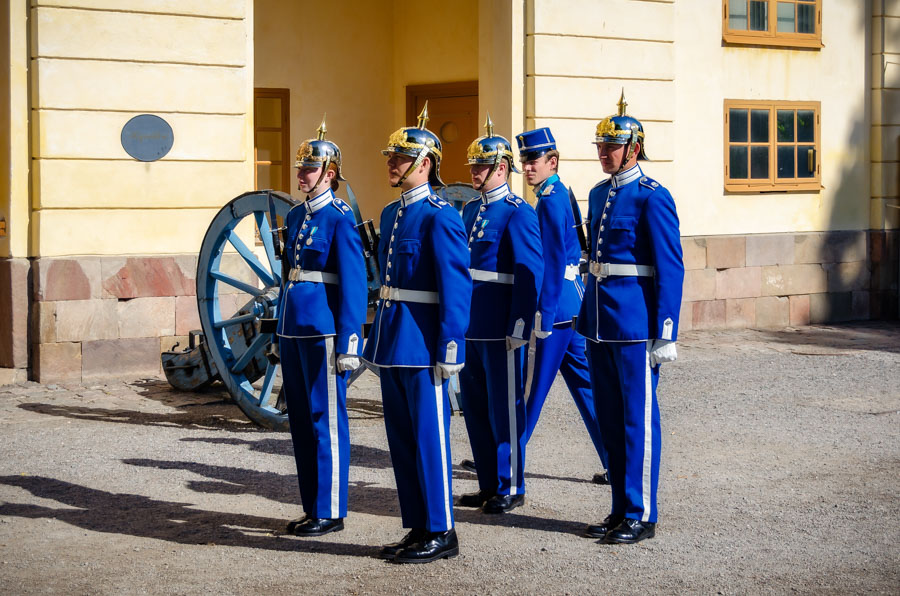 The Royal Theater, dating from mid-18th-century, is the original building that is mostly built of wood and remains in use for occasional performances. 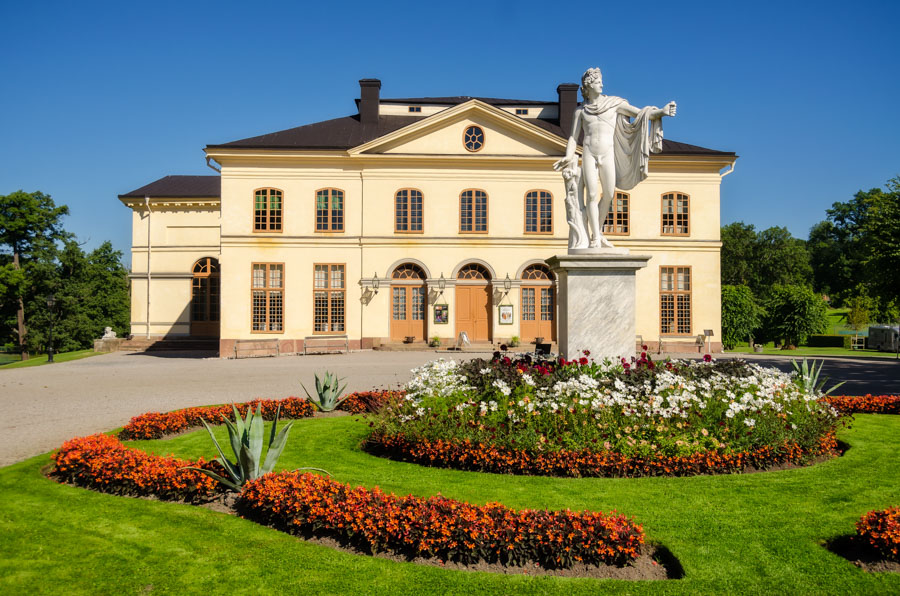 Unlike the palace, touring the theater is possible only on a guided, timed-entry basis, at an extra cost to the basic ticket. We decided to go and not regretted it a second. The 35-minute tour provides tons of insight into the operation of a theater of this age as well as many interesting historic tidbits. Unfortunately, photography is not allowed in the auditorium, due to some copyright nonsense related to the decorations for the next scheduled performance. I could only attempt to take pictures in other rooms, which display costumes and some artifacts related to famous actors that performed here in the past. 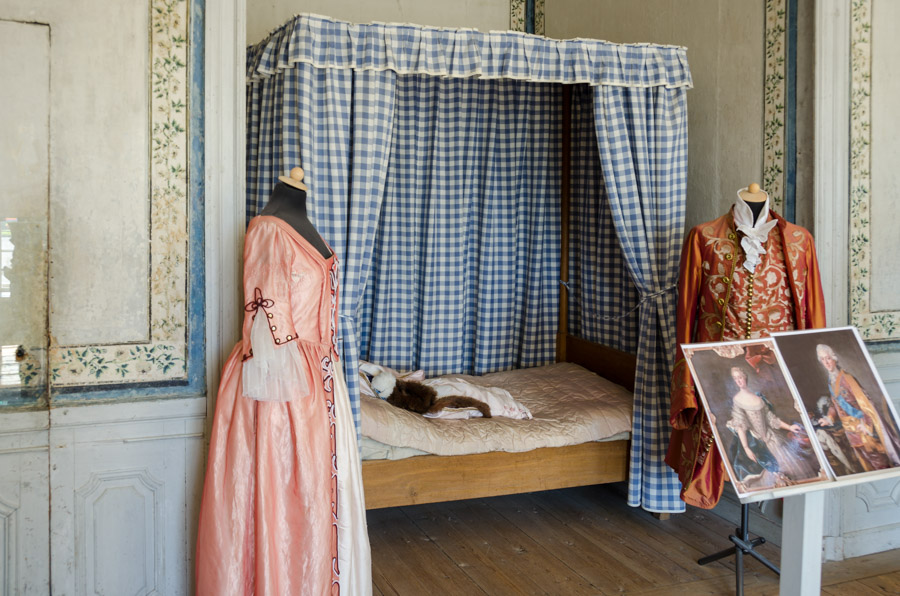 Another structure of renown on the palace grounds is the radiant Chinese Pavilion. 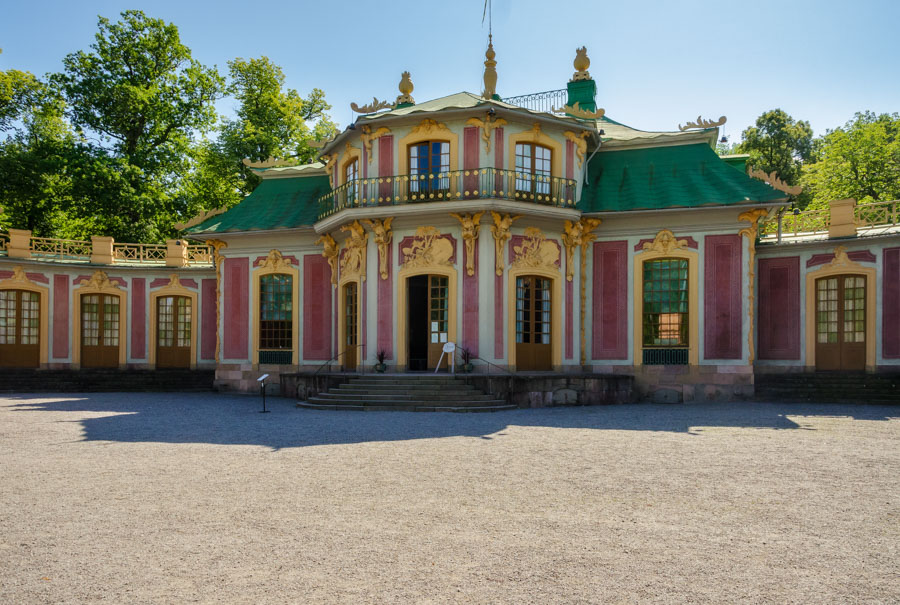 The colorful palette is evident in all rooms of the pavilion, with each room dominated by a major hue. Here is a corner when adjoining colors can be seen together. 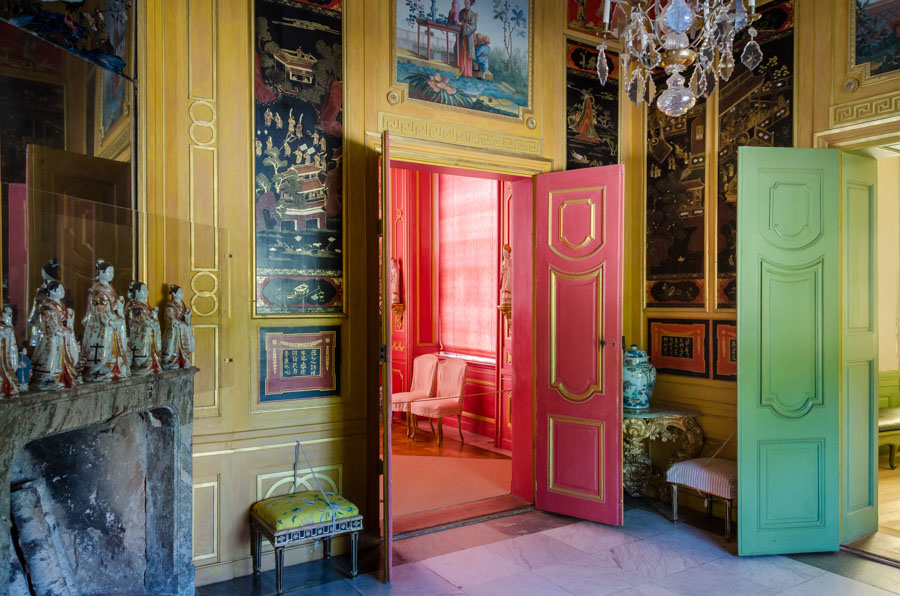 The vast grounds contain several formal sculpted gardens with fountains and large wilder-wooded areas that are nonetheless perfectly maintained. The next shot is a perspective towards the palace along the main alley running from the wooded part. 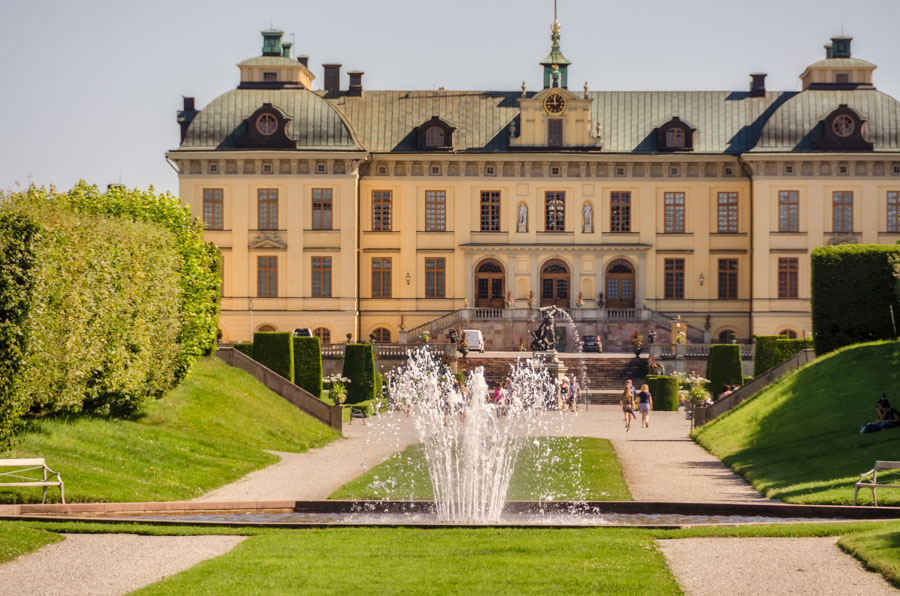 Don’t be fooled by the long focal length compression – the distance from where I stand to the palace is at least 800 meters, easily twice or more that of the opening shot of this essay.

And another perspective of the palace facing the lakefront on the opposite side of the gardens. 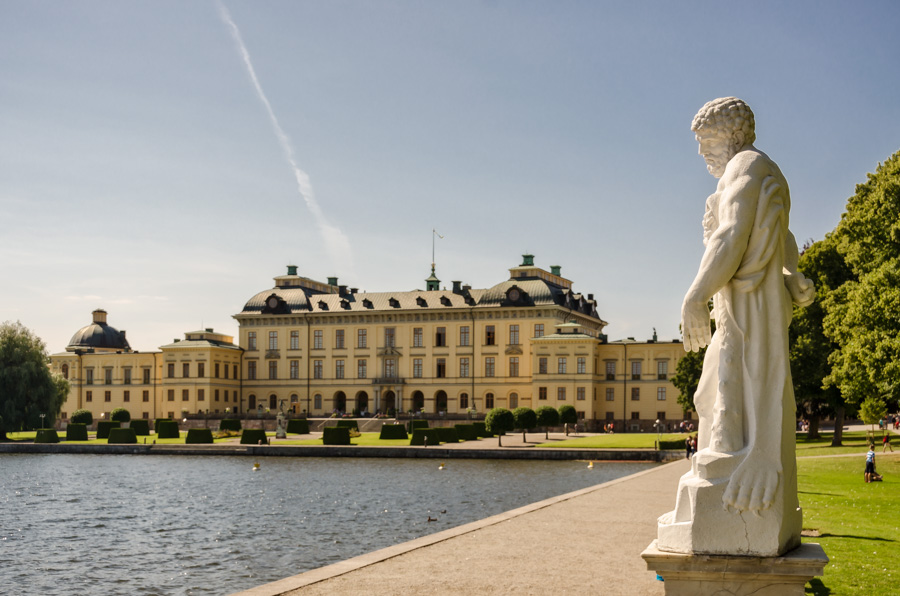 An un-rushed exploration of Drottningholm calls for at least five-six hours, which can easily be extended to a full day if you choose to have a picnic somewhere on the grounds. Combination tickets that allow entry to the pavilion and to the theater cost extra on top of general admission. “World Heritage” combo is the most expensive all-inclusive option, with guided tours at all points of interest (although you can choose to explore on your own, except at the theater).

These and other pictures taken at Drottningholm Palace have been added to my Stockholm Flickr album.