Bergen is one of those cities that is mostly known as a gateway to something (in this case, fjords). Most of the itineraries, even those that make the city a base for regional exploration, leave at best a single day for getting acquainted with Bergen. Although it is bigger in size than an average “intraday” point of interest, it is certainly not a large metropolis. And Bryggen aside, its other sights on offer are not of a true must-see caliber.

We also planned only a single full day for Bergen exploration. But because we had two additional nights in town, we ended up with a better feel for its charm and vibrancy than a basic one-day visit would allow.

We will start with a picture of houses that extend Bryggen waterfront. The shot is taken from the same vantage point as several of the shots appearing in the Bryggen essay. 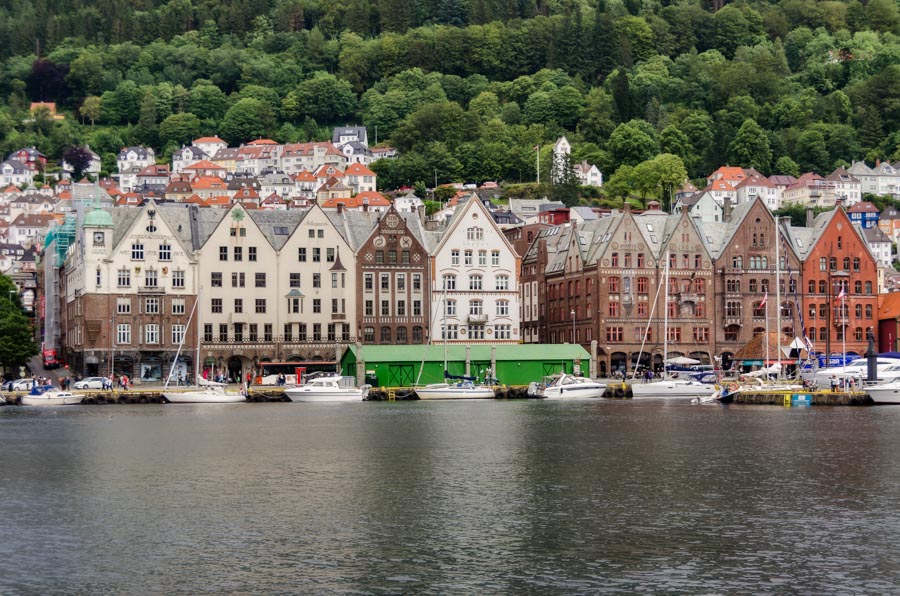 These houses date back only to the beginning of the 20th century, although some of the area was built up in the 18th century. In fact, the Hanseatic Museum that we mentioned in the Bryggen entry edges its way into the frame at the very right of the picture.

Here is a different perspective of these houses, with the museum making another effort to get in on the right, and the commemoration of the victims of the World War I in the foreground. 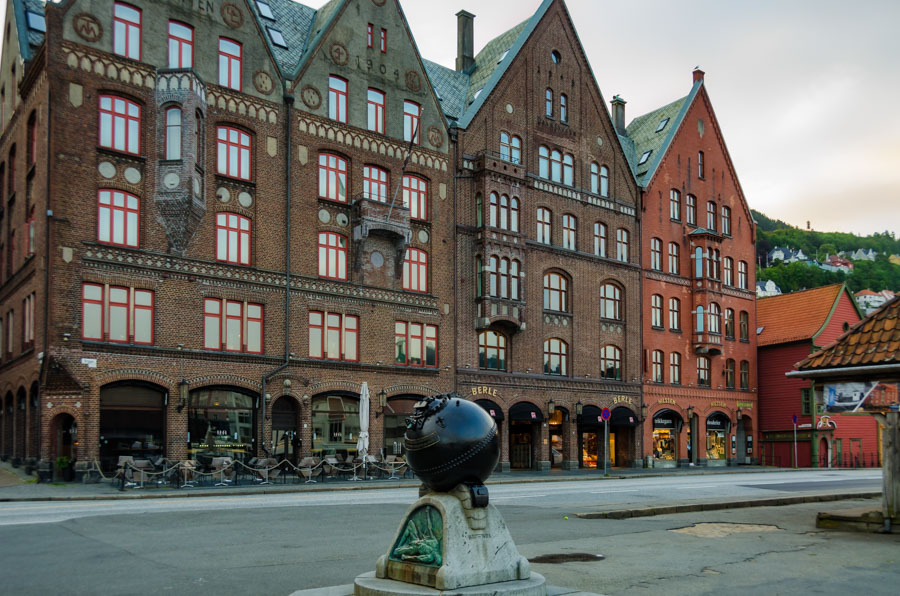 And another perspective of the same row of houses in the early morning. 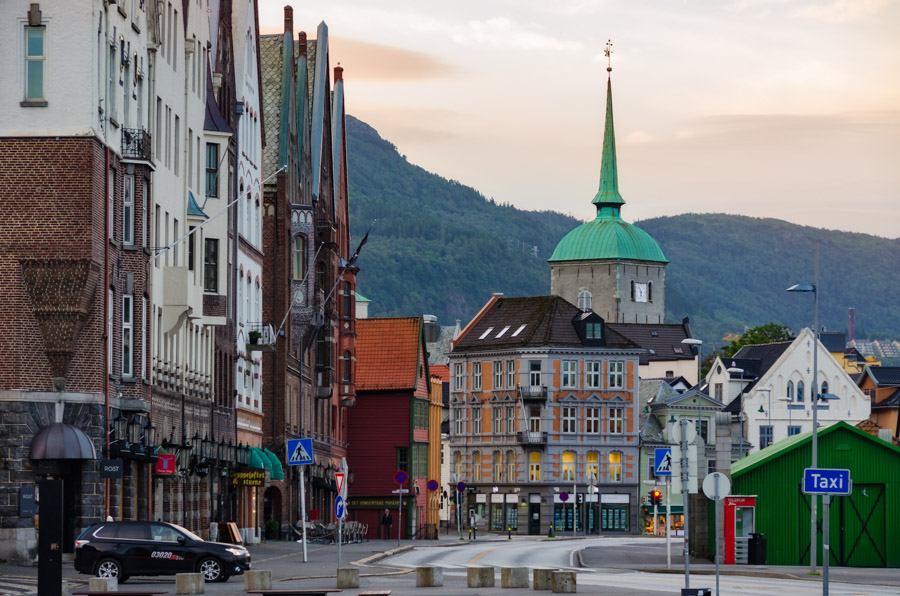 A perspective on the nearby part of the harbor dominated by Mount Fløyen in the background. 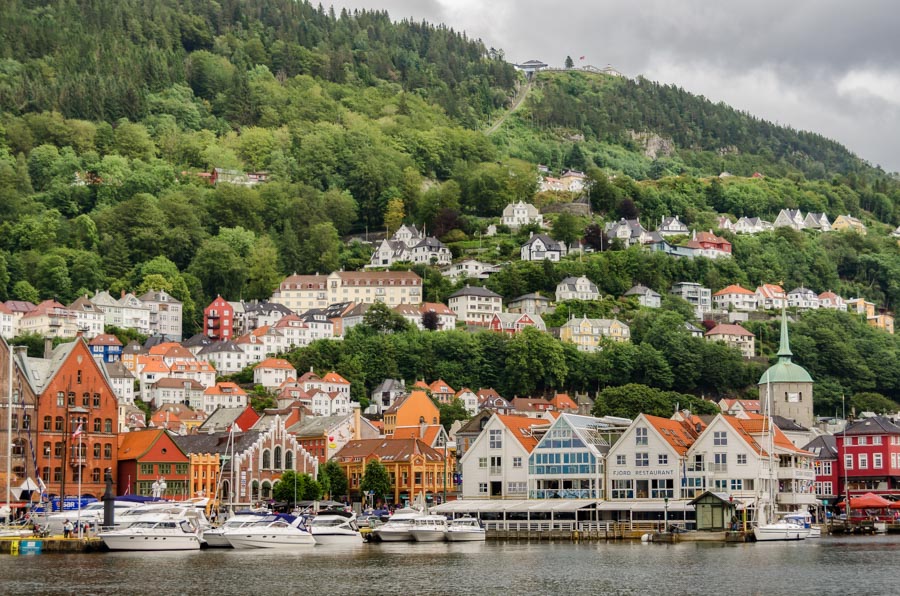 At the top of the frame you can see the upper terminal of the funicular, next to a lookout platform that offers fantastic views over the city. I have posted a panorama taken there in my Scandinavian announcement and will make yet another post of additional views from that elevated point.

This is Sjøfartsmonumentet, or Maritime Monument, tracing the history of Norweagian seafaring exploits on the main town square, Torgallmenningen. 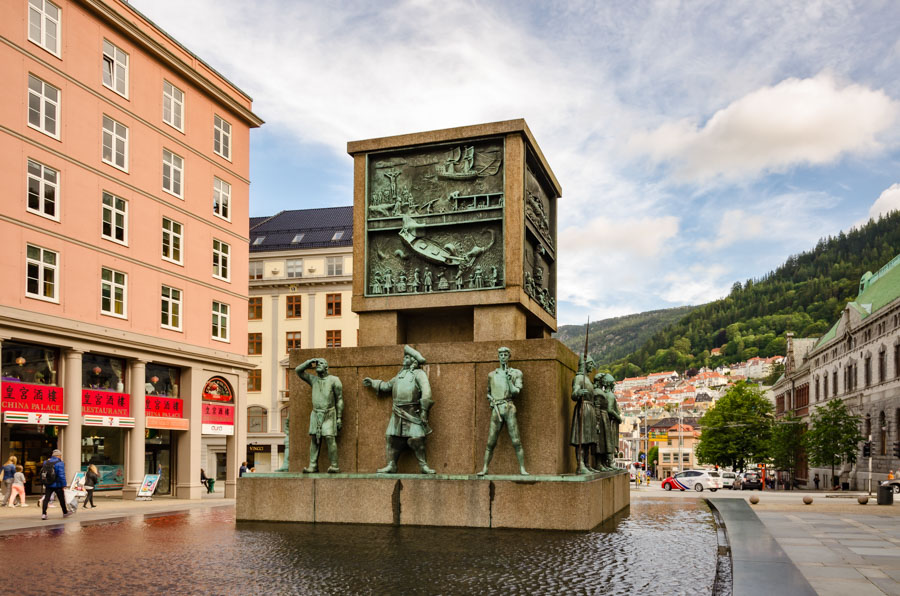 There are other attractive squares in the city center. Here is a gazebo at Byparken. 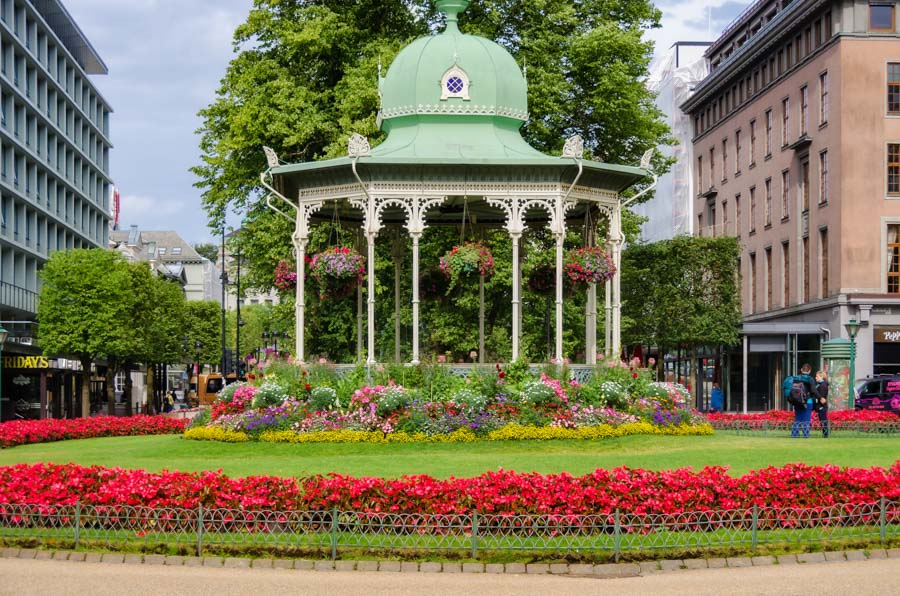 One church in Bergen that warrants coming in is St Mary’s, at the edge of Bryggen, that has been renovated and re-opened sometime in 2014. I normally observe “no photography” signs posted at some of these sights, but the pulpit of this church was so unusually ornate that I had to be disobedient for once. 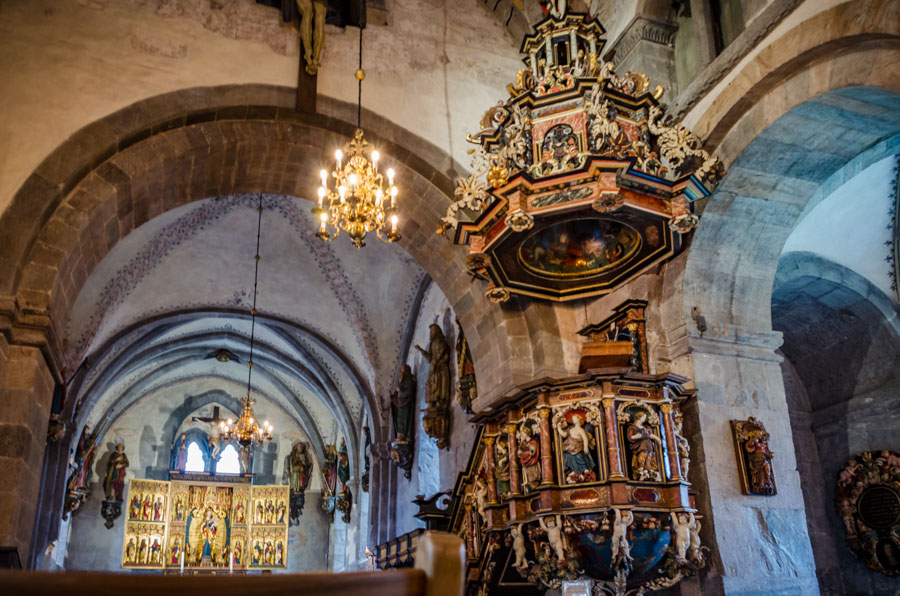 Rosenkrantz Tower is another worthy attraction, with several small exhibitions related to Bergenhus Fortress and the history of Bergen, and nice views from the roof gallery. The best shot of the tower that I took happens to be a night-time one. 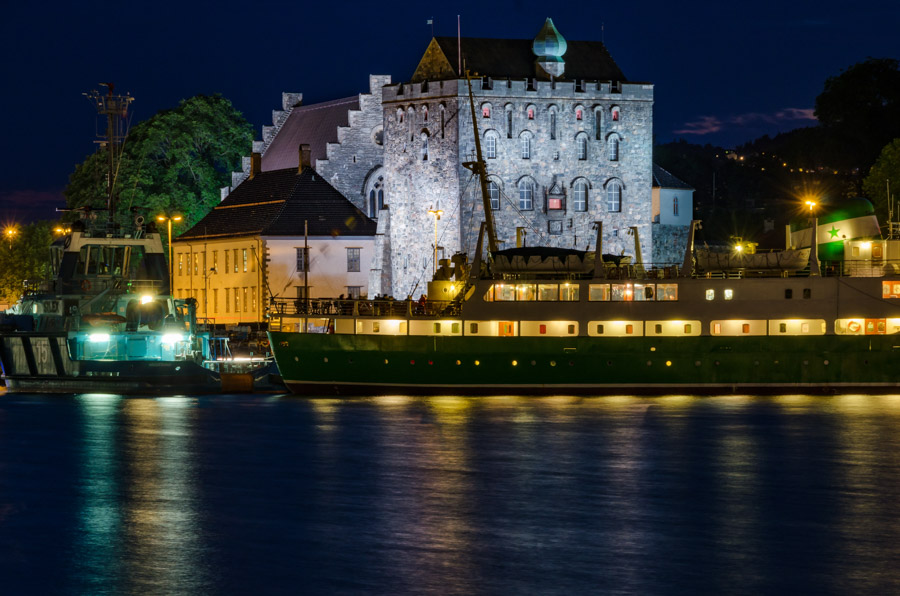 And here is the harbor view from the terrace. 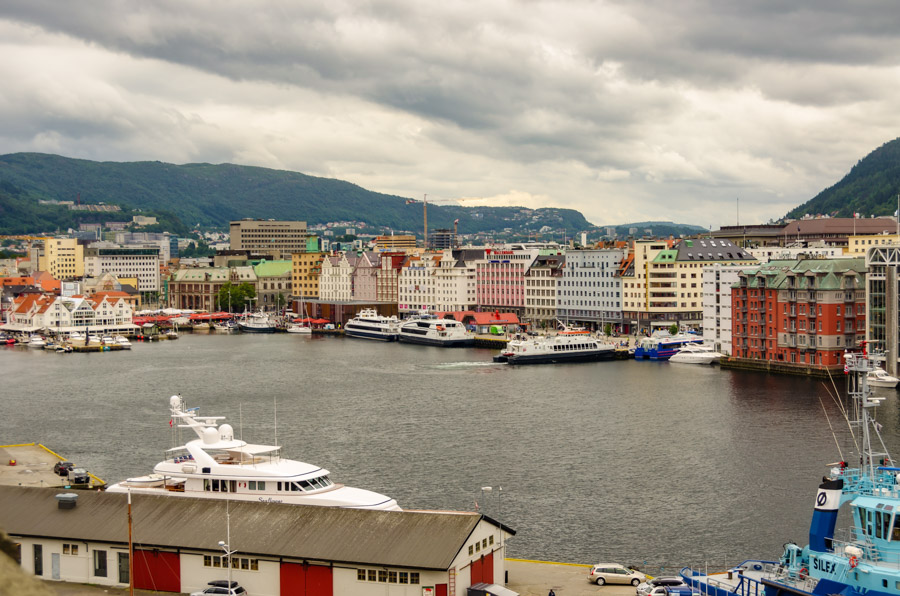 The only good elevated points for photographing Bryggen must exist at the hotels that line up the quay in the above picture. You cannot see Bryggen from Fløyen, and you can only see it sideways from the top of Rosenkrantz Tower. 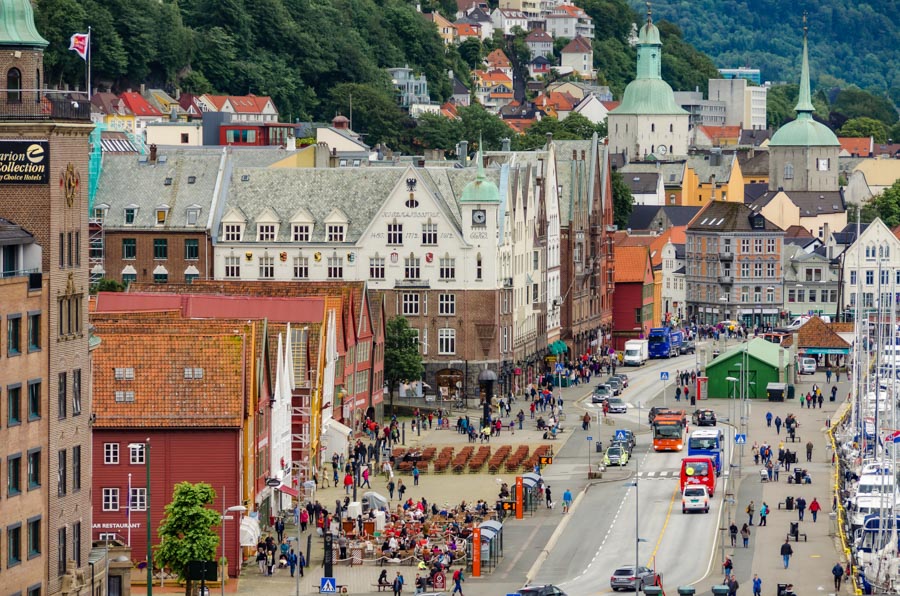 The vibrant fish market at the center part of the harbor quay offers wide selection of raw seafood, plus many other delicacies, as well as many opportunities to get a nice snack. I managed only one passable picture of the goods on display and it barely illustrates the amount of available seafood. 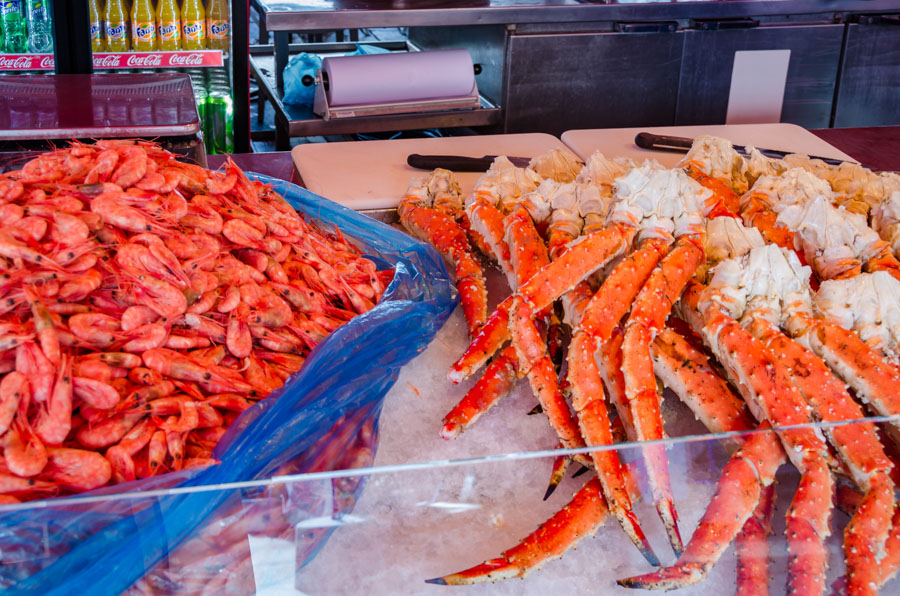 We came across several examples of street art on the walls of buildings. This was a work in progress, we even stopped for a few minutes to observe the artist once he returned to his chair. 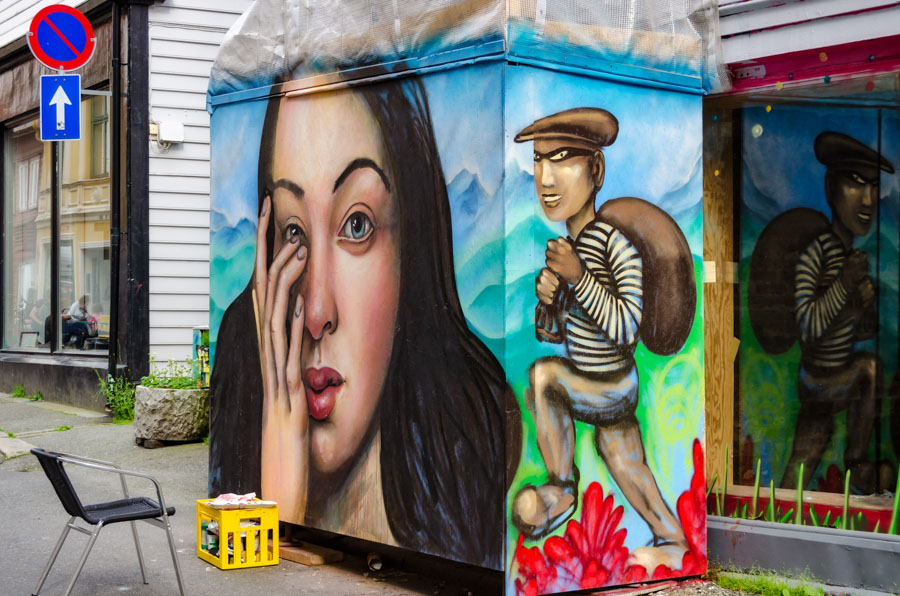 And a couple of more night-time shots. This is Vågsallmenningen, with a statue of Ludvig Holberg, the writer and philosopher whose other statue we already saw in Oslo. He was born in Bergen. 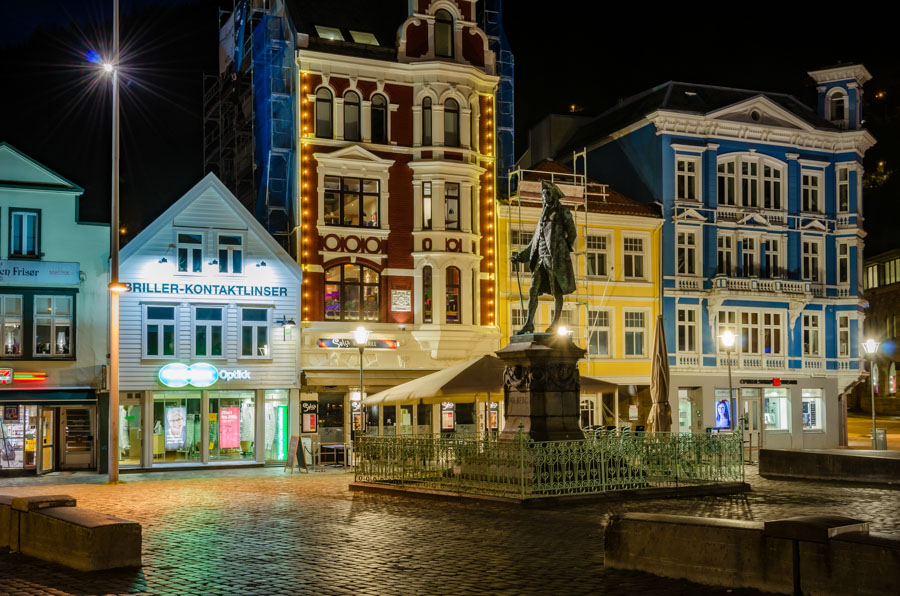 And this church-like building is actually a shopping center, Kjottbasaren. 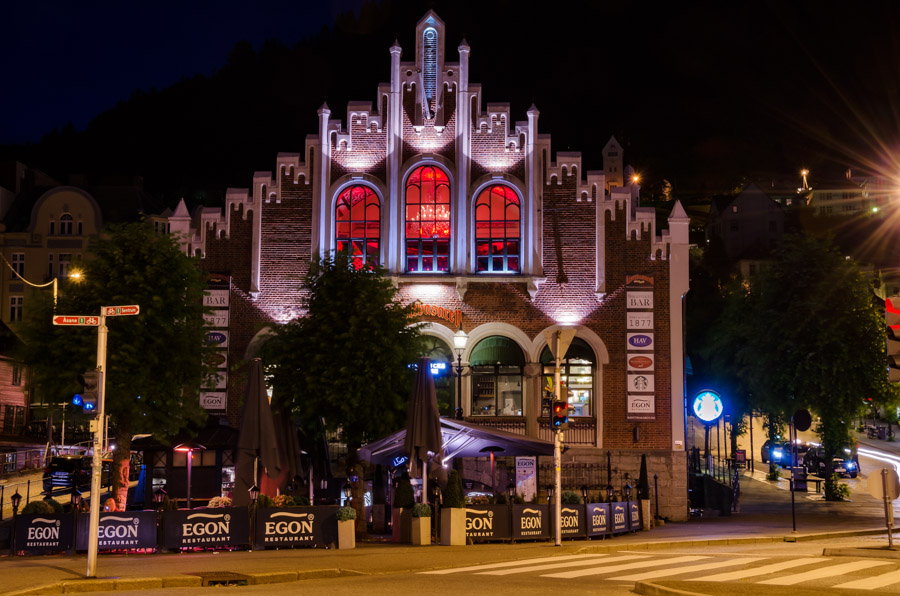 These and other pictures of Bergen have been added to my Western Norway Flickr album.

This is not all from Bergen. Two of the stops on our tour of the city warrant individual blog entries.