Bryggen is one of the most impressive recent additions to my growing collection of World Heritage sites. Picturesque, full of historic significance, and able to retain many of its original features, this old wharf is recognized by UNESCO for being the only remaining preserved outpost of Hanseatic League as well as for its wooden urban structure common to centuries past.

I took advantage of our base in Bergen sitting literally at the corner of Bryggen and made efforts to photograph the historic wharf at different times of day, including late night and early morning, and, most importantly, with assistance of a tripod. I am pretty happy with the results, it should be said.

Let’s start with daytime view of the scenic Bryggen waterfront. 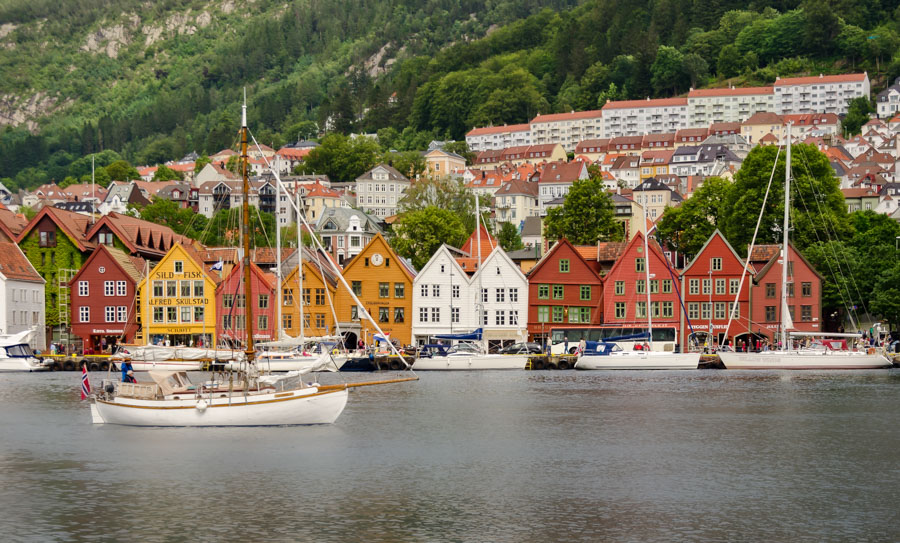 These 11 colorful houses as well as almost 50 other buildings that are located behind them comprise the boundaries of the erstwhile self-governed German enclave on Norwegian coast that was home to Hanseatic traders, their staff, and their warehouses. They were all built between 14th and 16th centuries and have always been made of wood. The district endured numerous fires over the centuries, always to be rebuilt to stand as before. 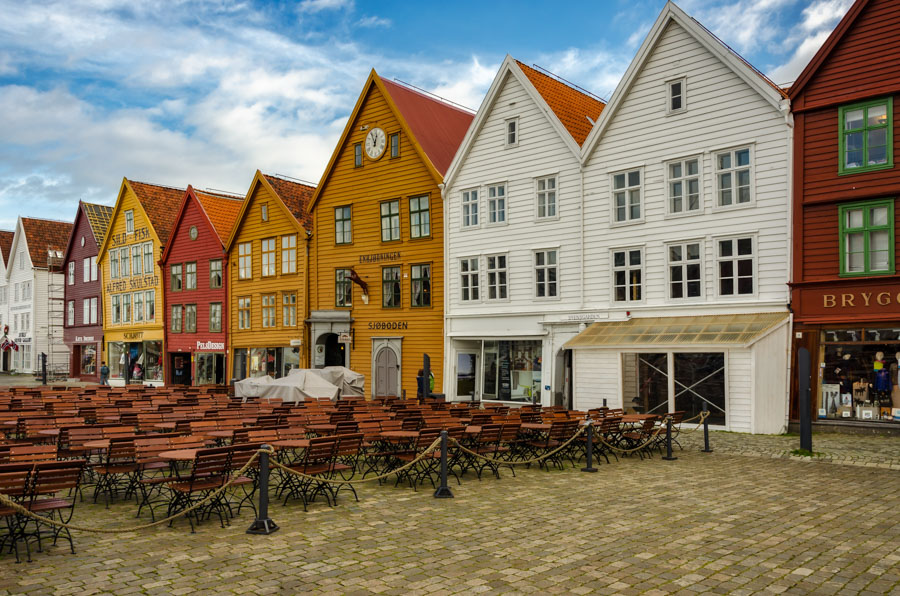 Nowadays, practically every building in Bryggen is home to a store or a gallery, many of which are quite interesting to visit.

Another angle from another morning that takes in all 11 front houses of Bryggen. 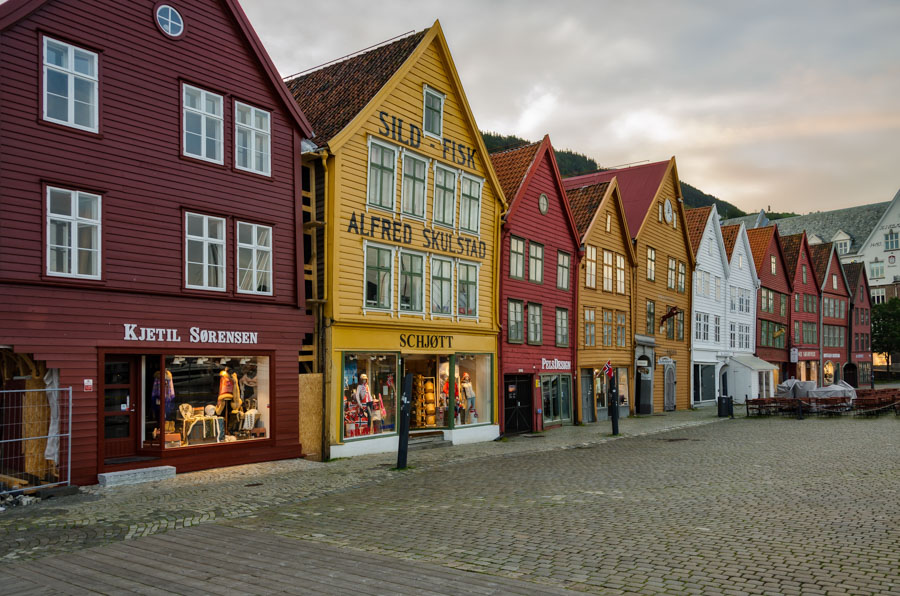 The harbor front area extends both left and right from this row of houses, but the buildings populating those areas belong to later times. Here is a look along the quay past Bryggen all the way to Rosenkrantz Tower at Bergenhus Fortress. 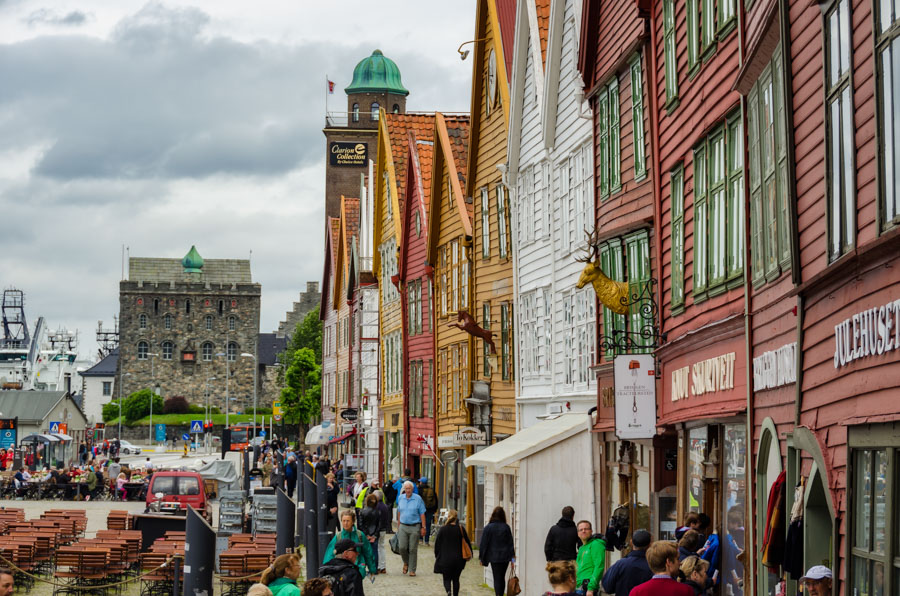 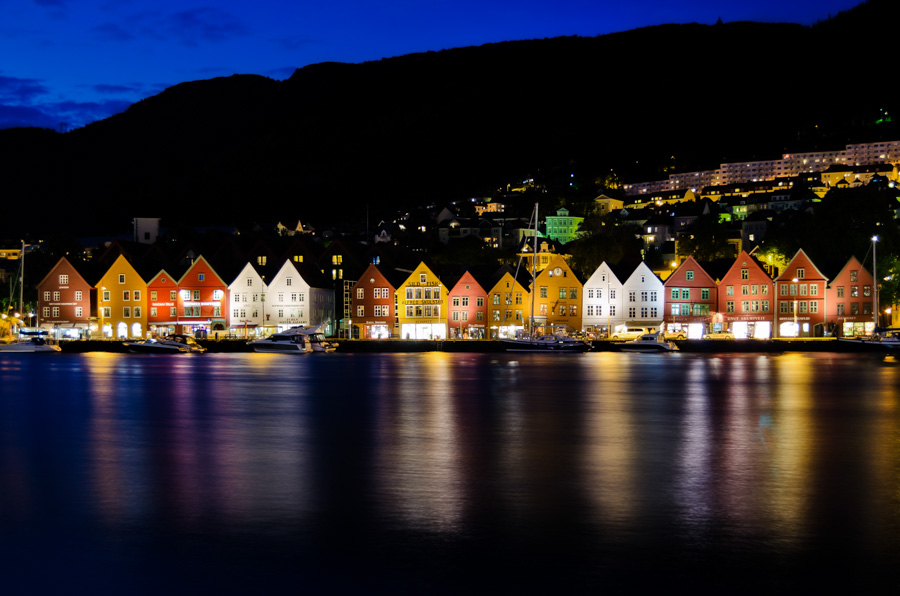 The six houses on the left appear to look just like the Bryggen houses (and are often included in panoramic views as parts of Bryggen) but they were actually built comparatively recently.

A night close-up of Bryggen houses. 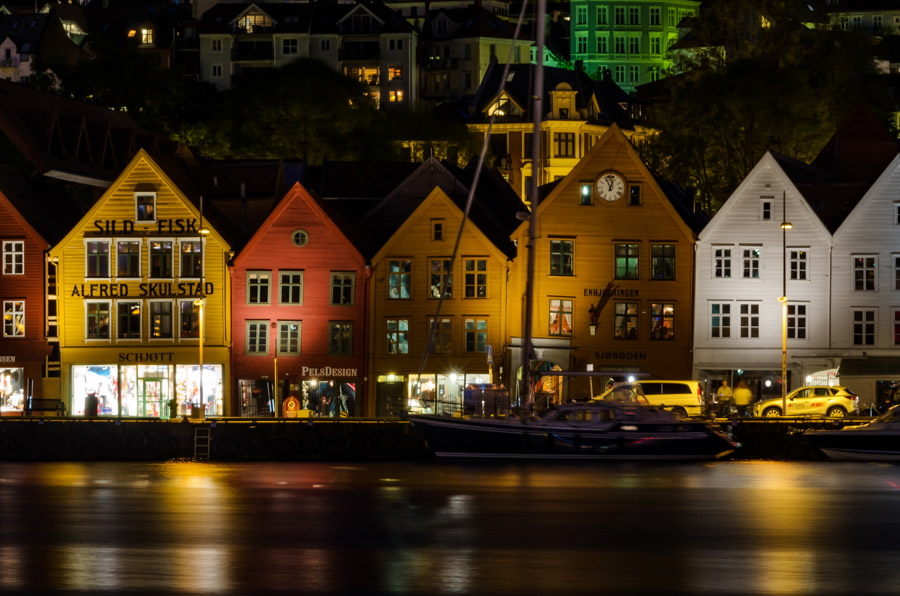 Once you walk into Bryggen, you will find yourself on a narrow street such as this. 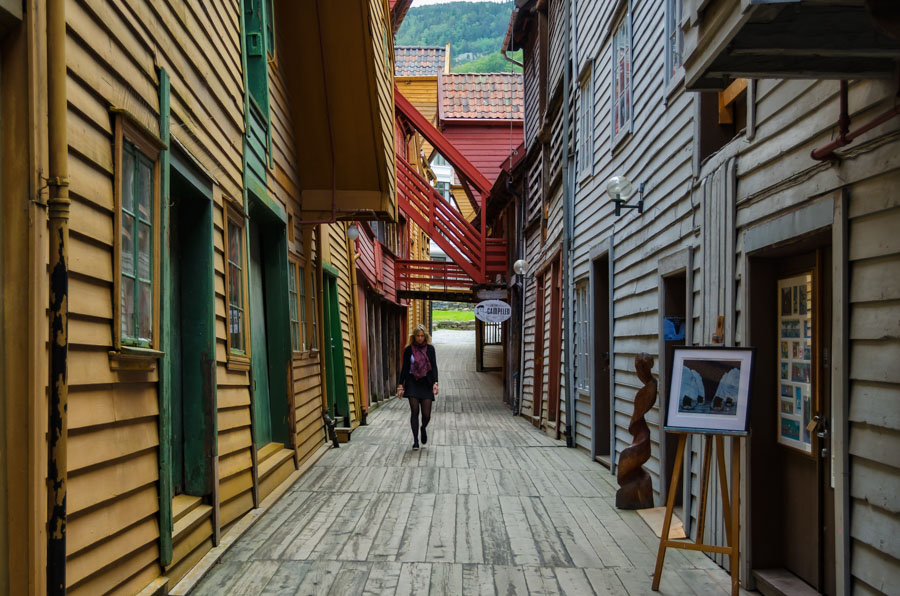 A corner of Bryggen. 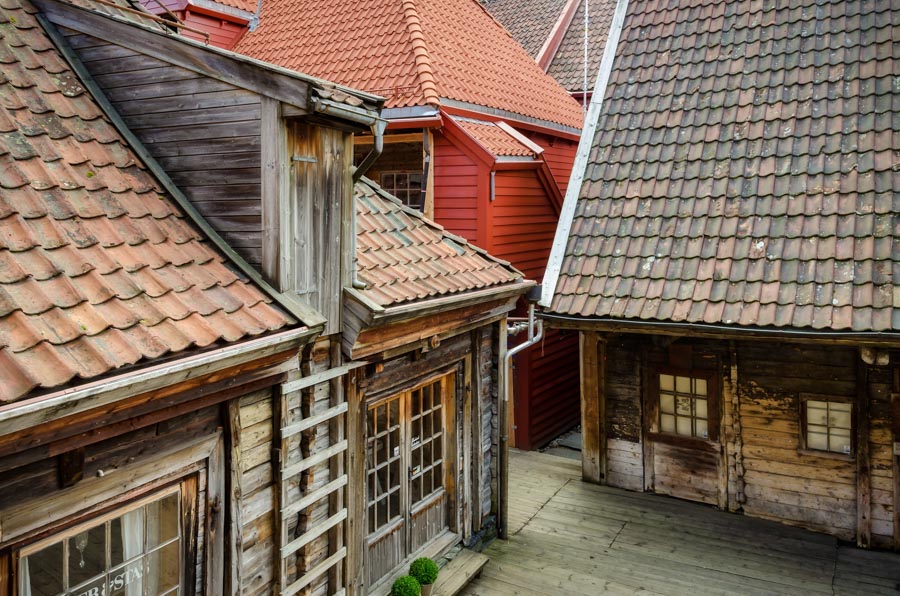 Stockfish, a dried unsalted variety of fish, was a key good controlled by Hanseatics. The only square of the district, Bryggestredet, is now adorned by this wooden sculpture. 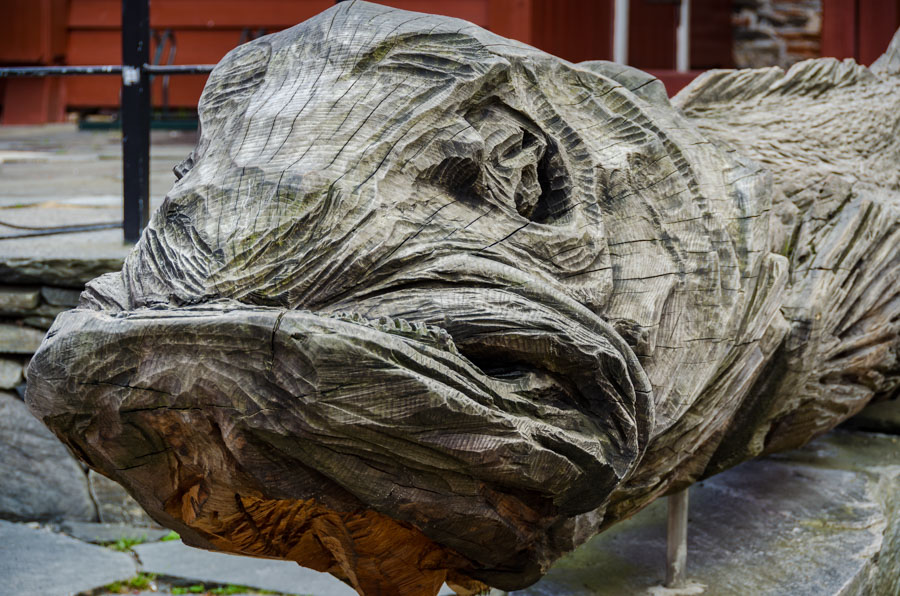 Here is a view of Bryggen from the back. 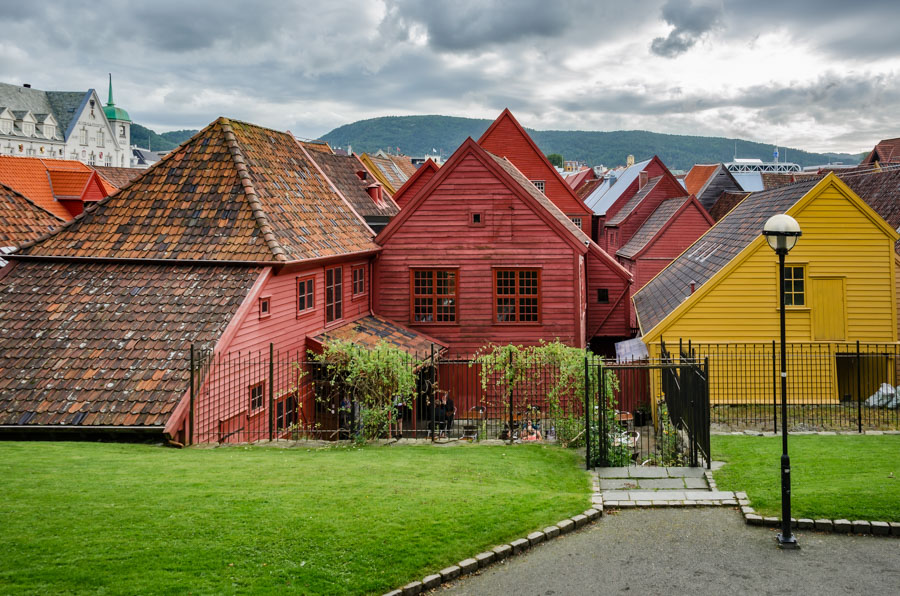 The Hanseatic Museum is located on the same quay but in a section that has been primarily built in the 18th century. The museum offer wealth of information on the history of the Hanseatic trading empire. It also offers a good look at how an 18th century merchant and his staff worked and lived. Here is a fragment of one room in the museum. 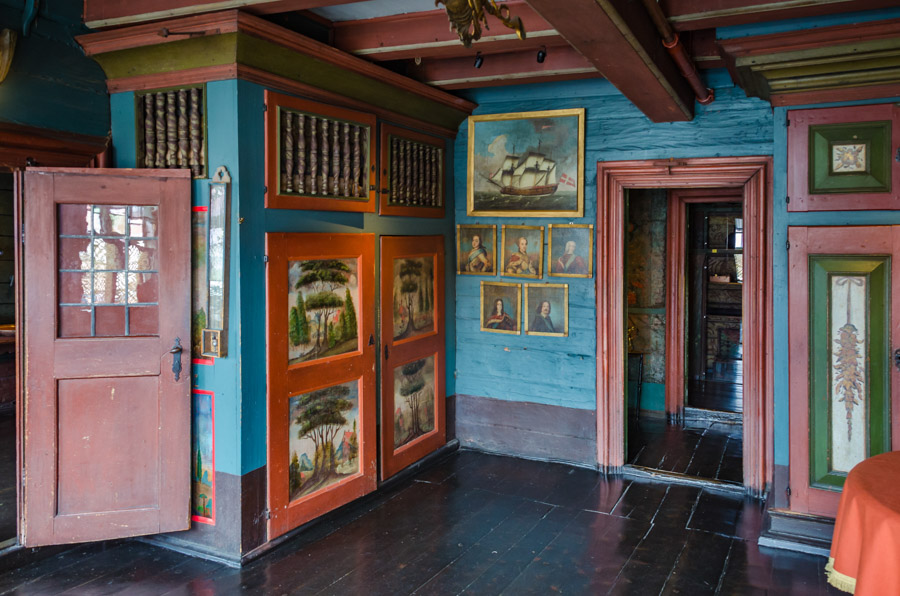 There is also a “heat-house” that can be separately visited on the museum ticket. Since fire was a deadly hazard in a wooden district such as Bryggen, its use was restricted to a few buildings at the edge that were somewhat more fire-proof and offered heat-based amenities that were not available in majority of Bryggen buildings. This is a shot of the common dining room inside the Schøtstuene. 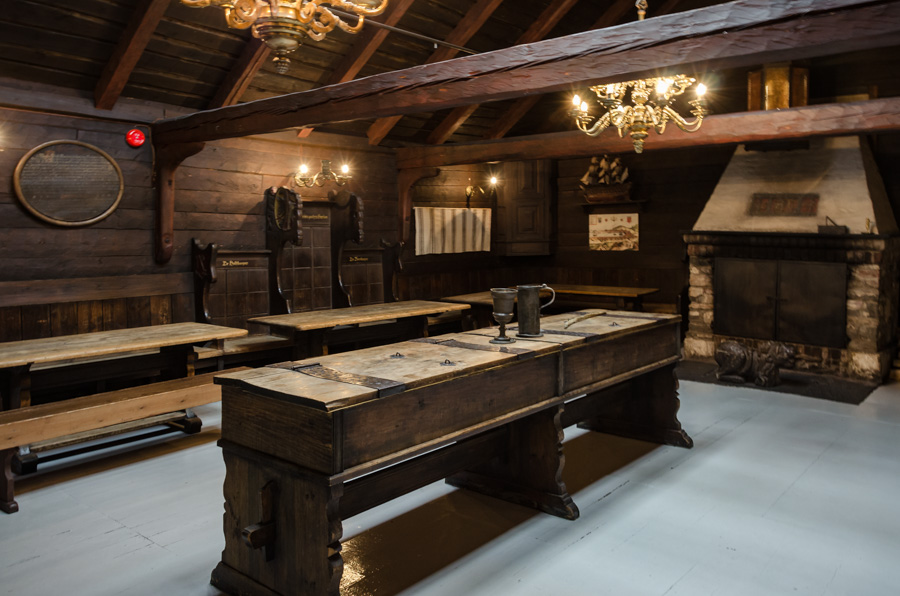 A sunrise shot of Bryggen. 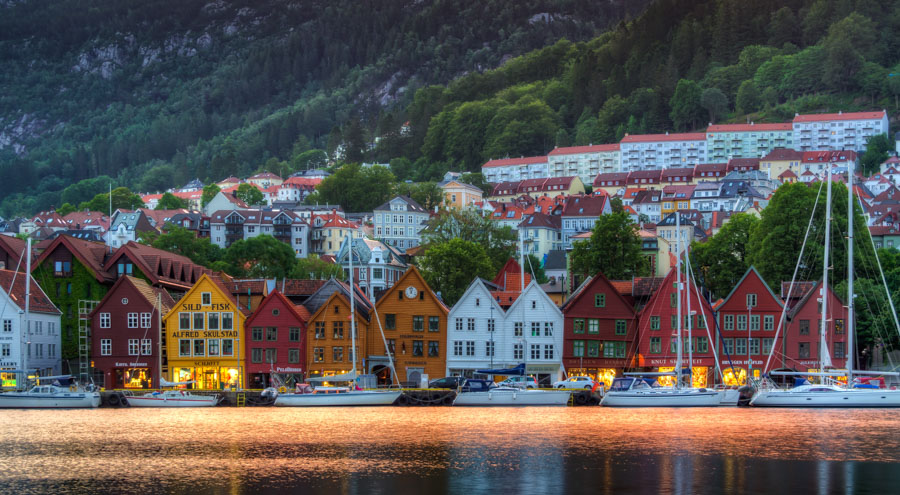 Another sunrise shot, with a longer exposure. 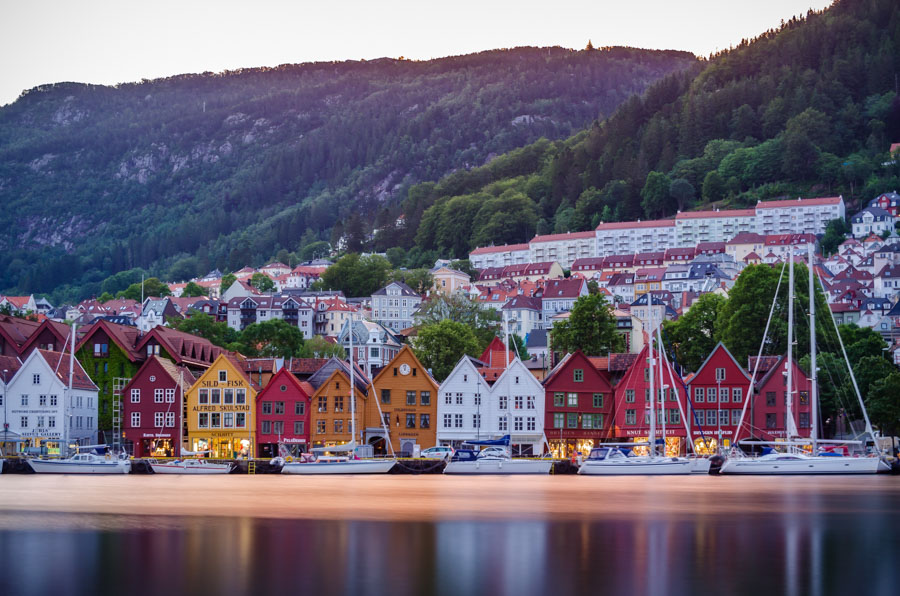 And a wide-angle HDR composite that takes in Bryggen and neighboring areas, also taken in the early morning. 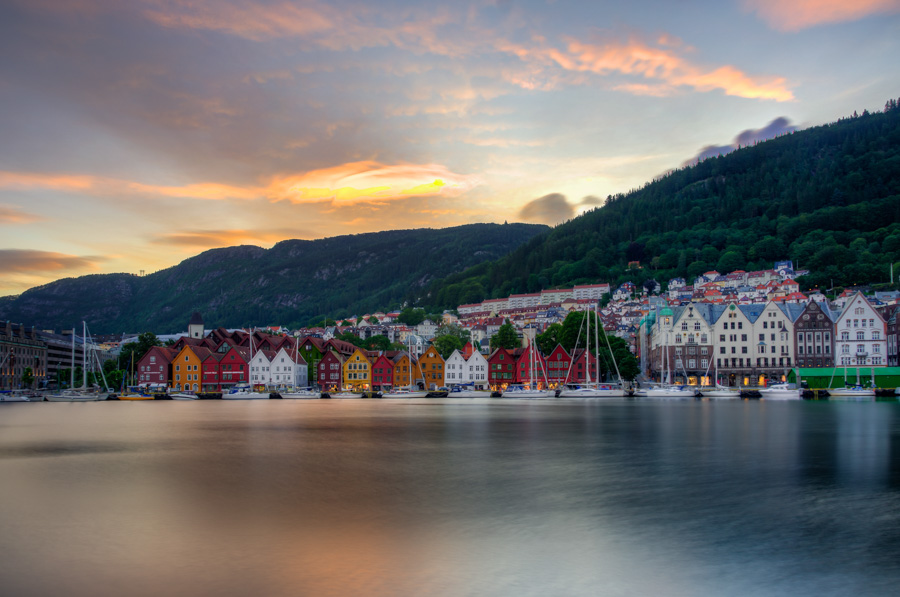 As can be guesed from that last shot, Bryggen sits practically in the center of Bergen, so getting to it is just a matter of a short walk no matter where you stay in town.

Bryggen is one of those places that you can claim to have seen after spending as little as 30 minutes in the area. If you decide to peruse shops and galleries, you may end up adding a few hours to that. Visiting Hanseatic Museum and Schøtstuene, and possibly Bryggen Museum (not the same as Hanseatic) takes another couple of hours. Finally, walking to the other side of the central harbor for views and photographic shots of the kind shown above can take another hour, since you will have to pass through the fantactic fish market where you will undoubtedly stop once or twice. All together, it could be 5-6 hours to get the most out of Bryggen.

These and other pictures of Bryggen have been added to my Flickr Western Norway album.