Oslo has one of the lowest “tourist attraction quotients” of all of Western Europe’s major cities. The reputation is, admittedly, mostly deserved. There is not much in terms of must-see in the Norwegian capital; not truly any significant historic monuments; not really any museums or art galleries of world renown; and not any exceptional ambiance or vibrancy that can make a city a magnet for visitors. There are a few impressive architectural masterpieces but probably not of the kind to be worth visiting Oslo all by themselves.

At the same time, I feel that Oslo is quite underrated. A determined visitor can find quite a lot of interesting things to do there, from cruising on the fjord to admiring Edward Munch’s works, from climbing aboard a 120-year-old polar exploration ship to walking up the sloping roof of a stand-out 21st-century building. It is more than just a nice city – it is a pretty interesting place to get to know.

I suppose the question is of relative attraction. There are other places in Europe that rate as more attractive destinations than Oslo. On our recent itinerary, it was objectively the least impressive major stop. But I am happy I got to see and explore it.

Let’s start with a long look along the main pedestrian street of the city, Karl Johans gate, that leads up to the Royal Palace. 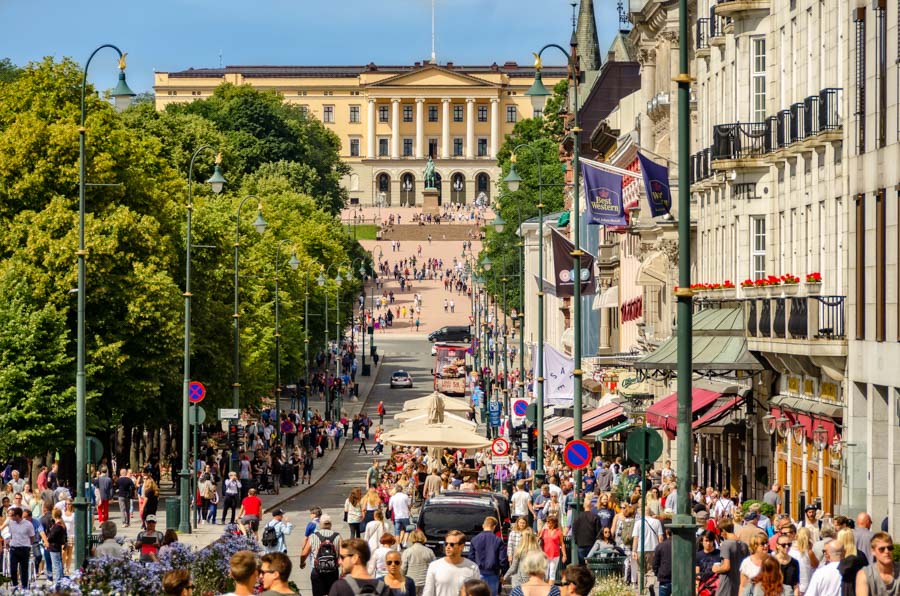 We chanced to be there during probably the best summer day Oslo was going to experience all year, and the street was quite busy. Not Ramblas-busy or anything of that kind, but you get the drift. And yet, you only had to step a block or two away from it, and the number of pedestrians on the street would dwindle to a veritably provincial quantities.

A closer look at the palace. 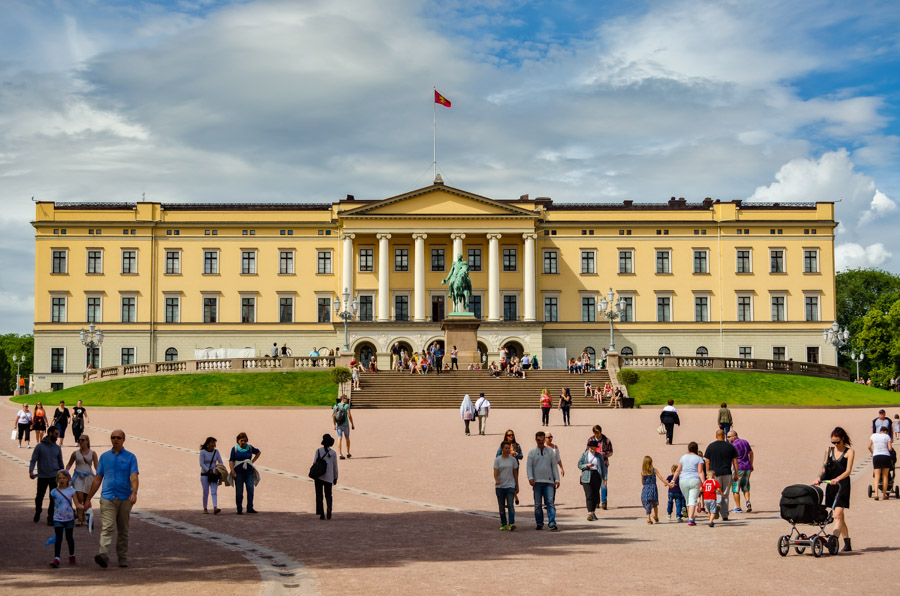 It takes some advance planning to get on an English-language guided tour of the place, but it was undoubtedly one of the highlights of our stay in town. The presentation is very lively, the rooms are worth checking out, and the history of the comparatively young monarchy is quite interesting.

While on the palace square, we accidentally came across the changing of the guard ceremony. Here are the Royal guards. 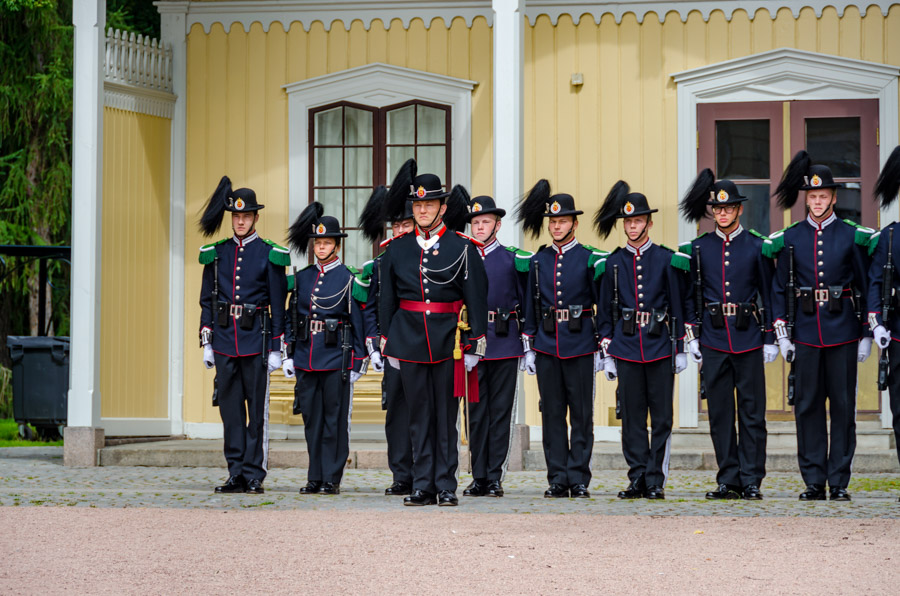 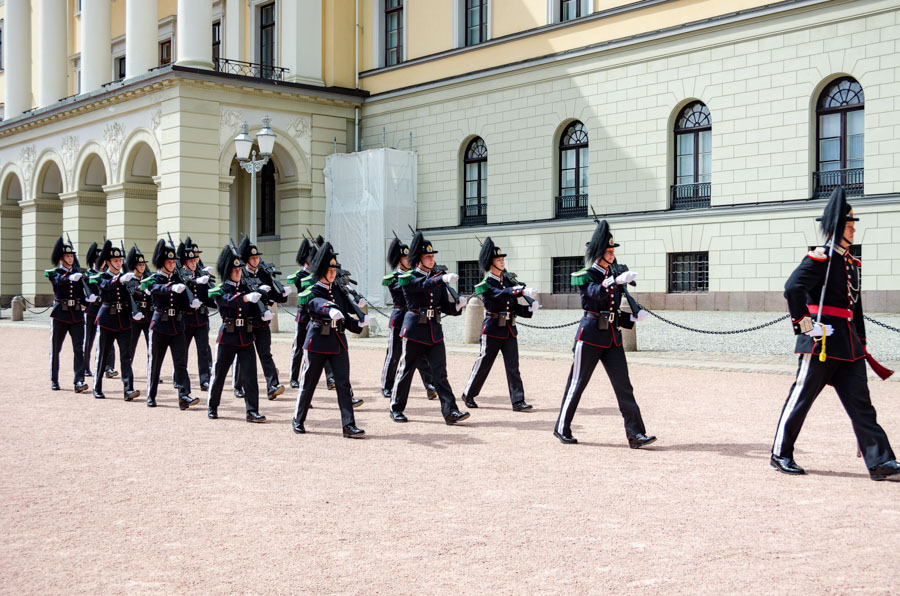 Churches are not a major feature in Oslo (in fact, the natives freely mark themselves as a not overly religious nation). Only the Cathedral might be considered a place of worship worth touring, primarily on account of its uncommon ceiling paintings. Here is a fragment. 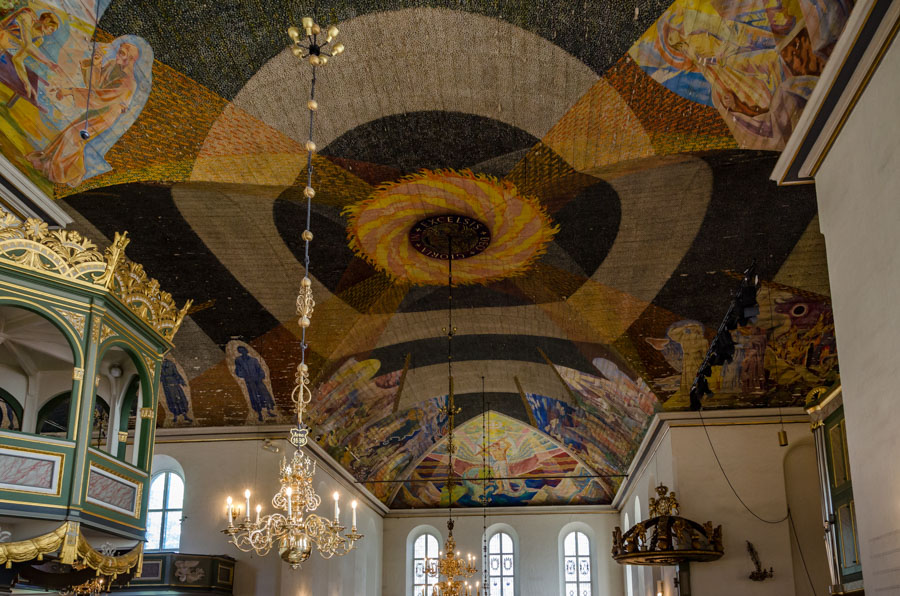 The City Hall’s vast interior space is definitely a sight to behold. The setting of the annual Nobel Peace Prize ceremony, it is marvelously airy and brilliant. 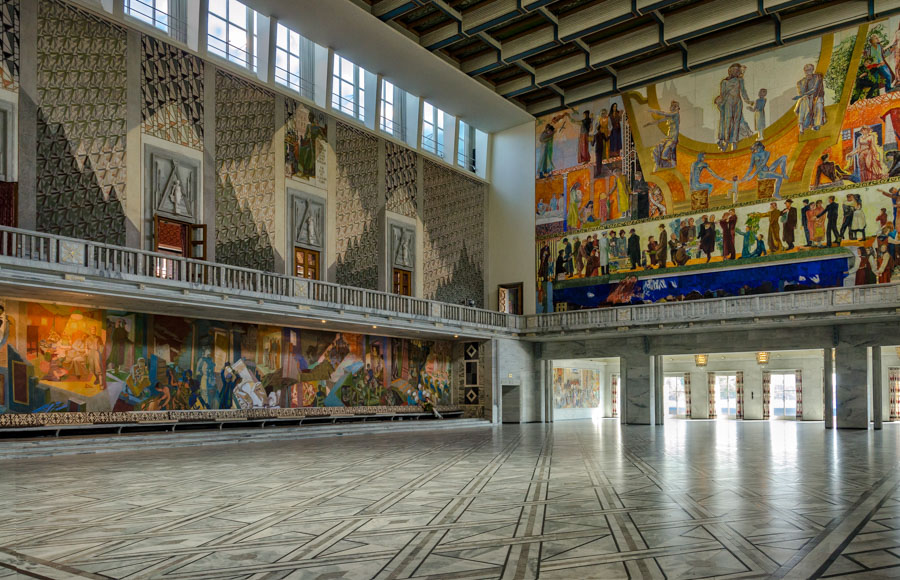 The City Hall is partially seen on the right of the next shot and I have to admit that I find it too industrial-looking for my taste. It does not spoil that view, though. 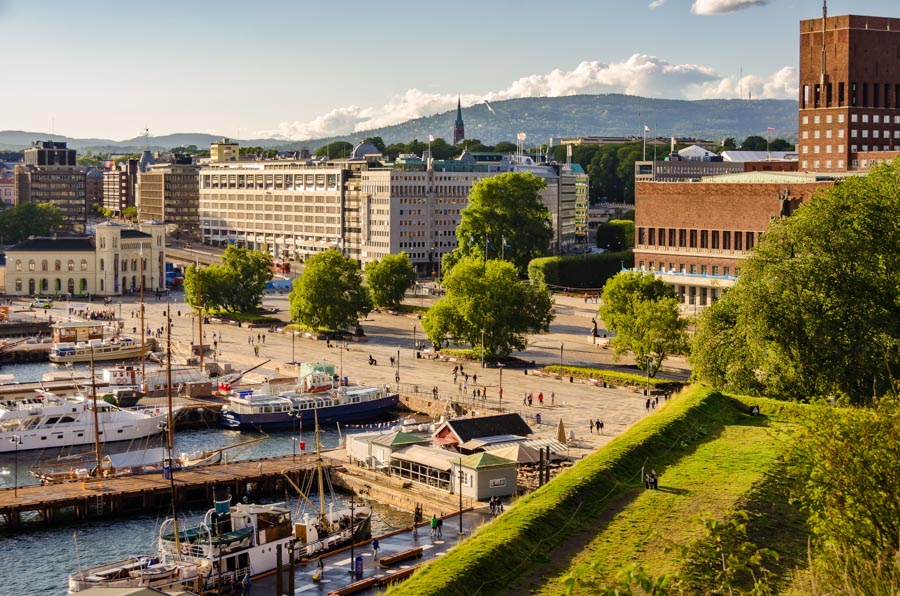 Akershus castle is none too remarkable a point of interest but some views from its ramparts, such as the one above taken before sunset, are quite grand.

The building of National Theater is one of architectural delights. 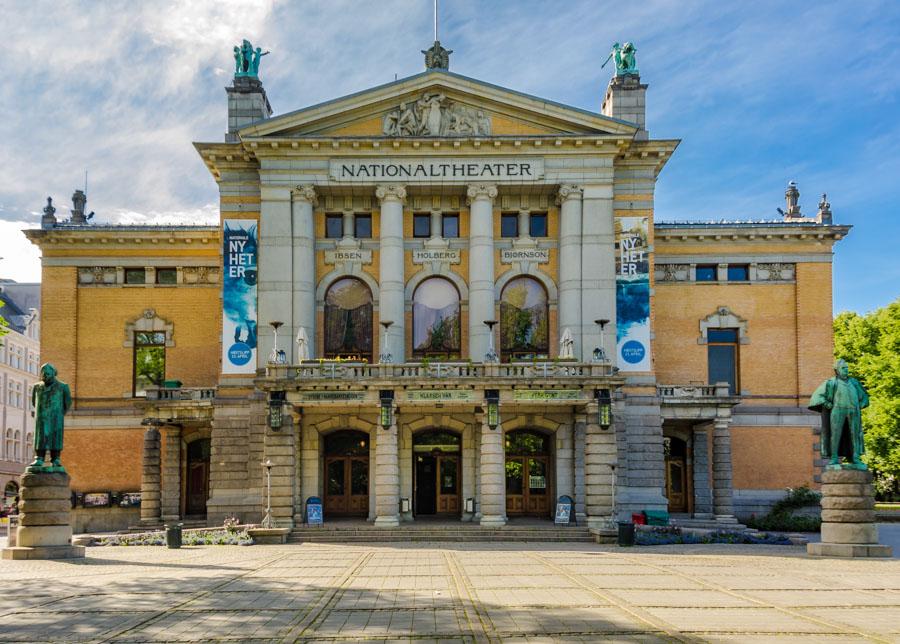 Where Oslo seemingly exceeds most of the other capitals is in density of statues on its streets and squares. They range from famous Norwegians to manifestations of human body to animals to random scenes or symbols. Henrik Ibsen on the left and Bjørnstjerne Bjornson (a writer, politician and Nobel prize winner) on the right are in the previous shot.

Around the National Theater is the highest concentration of cultural personalities. This is Per Aabel, an actor and dancer. 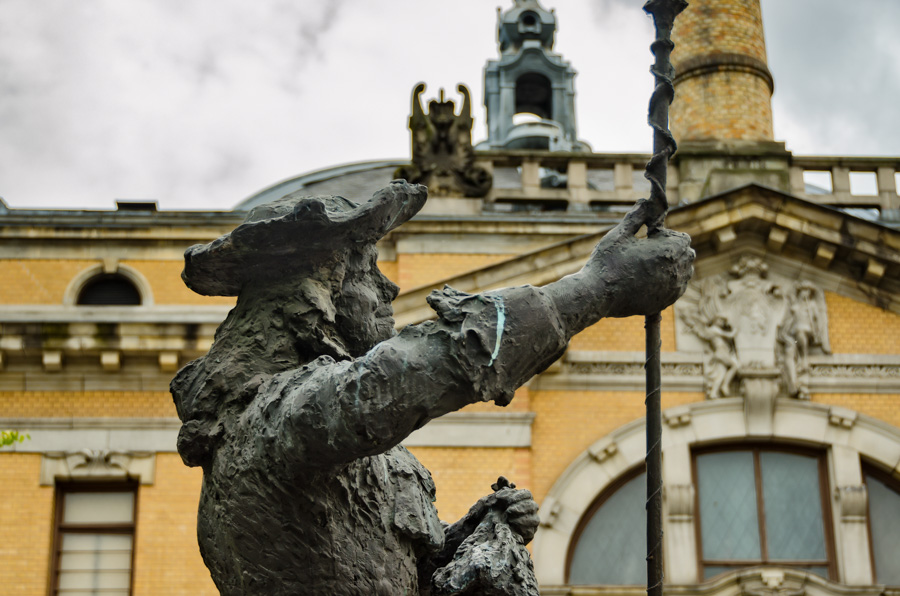 And this is Ludvig Holberg, a philosopher and playwright. 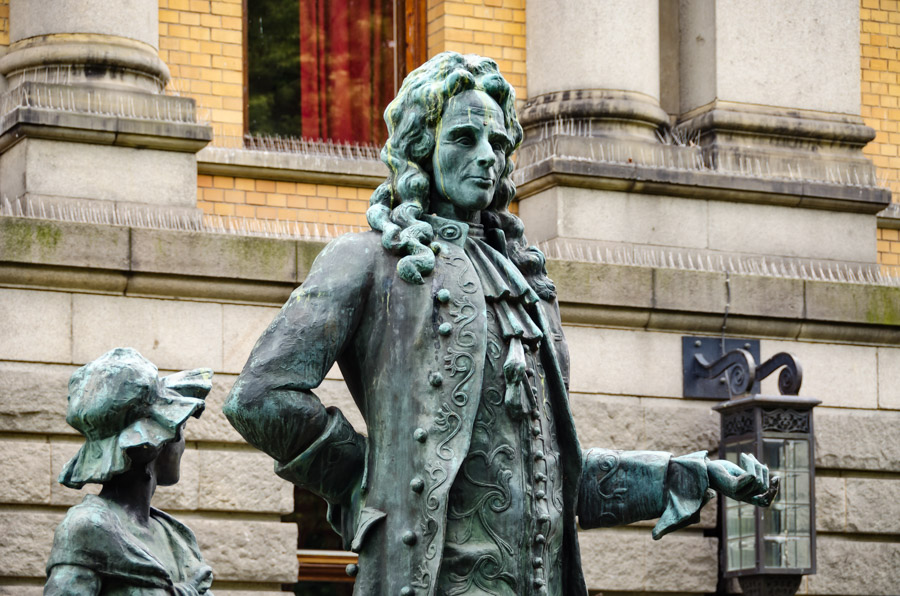 Gunnar Sønsteby, a resistance hero who is one of the most respected figures in Norwegian history, is immortalized with his bike. 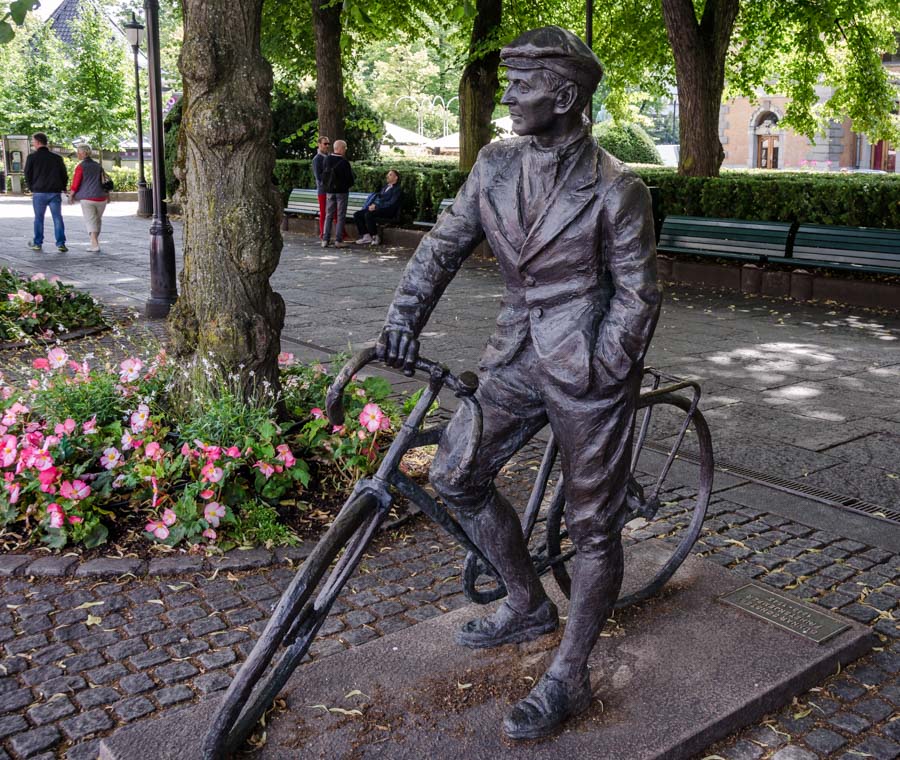 A woman on the City Hall square. 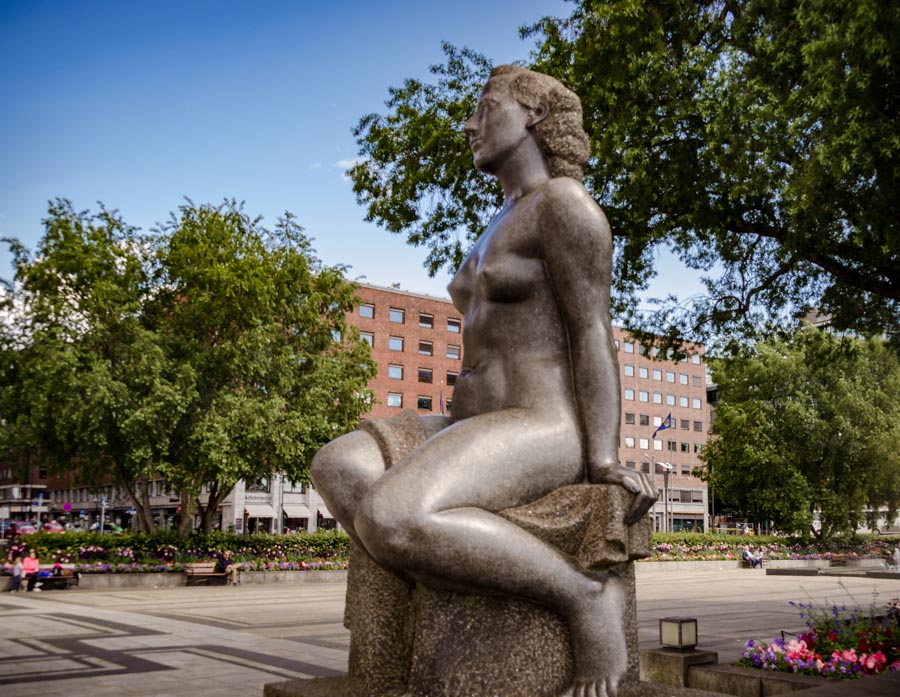 A feline in front of the central train station. 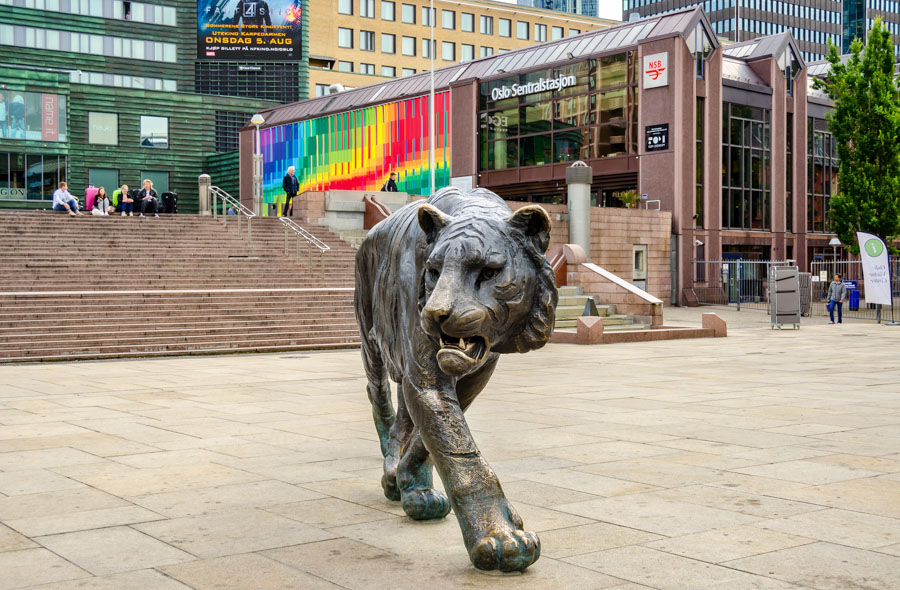 And an esoteric piece called She Lies in the lagoon off the Opera House. 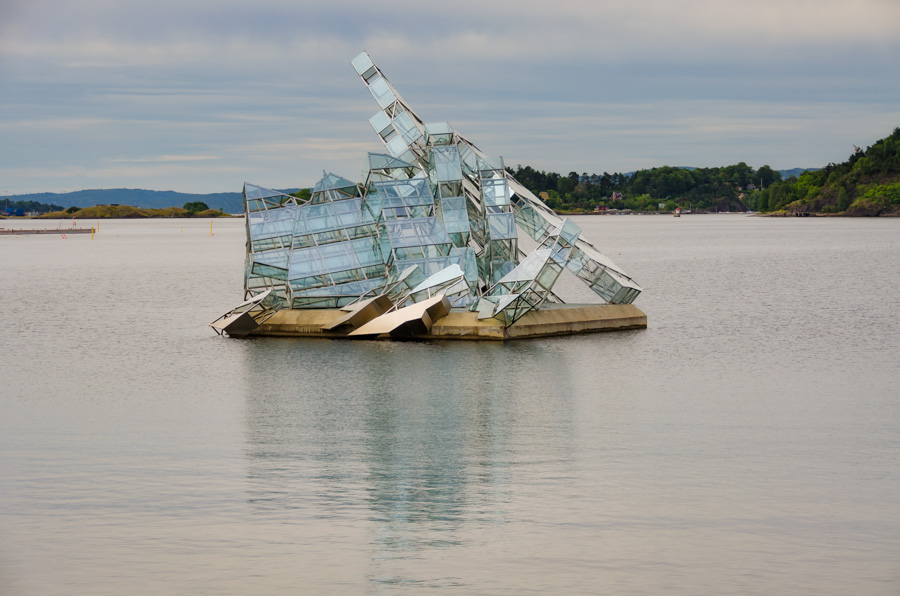 The Opera House is an undeniable highlight, of significantly more modern nature – it was completed in 2007. Its sloping forms allow any visitor to literally freely walk on its roof. Here are a couple of angles that may not be truly illustrative of the experience. 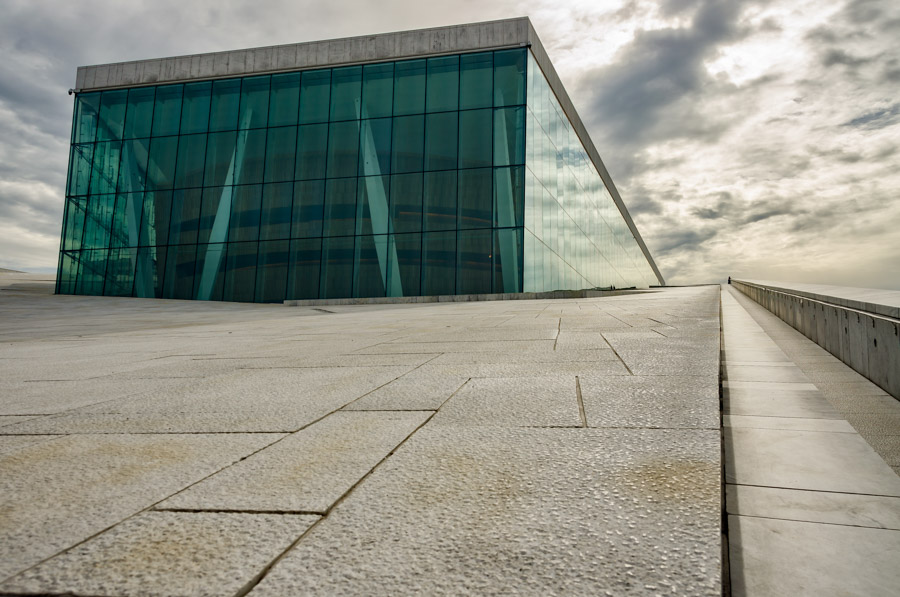 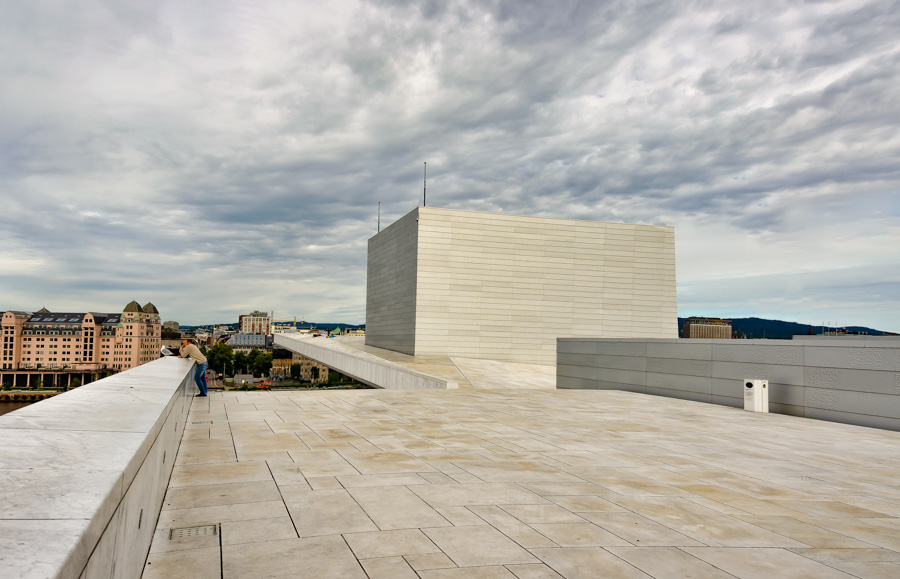 In the center of the city, there are plenty of pretty houses and attractive points of view. 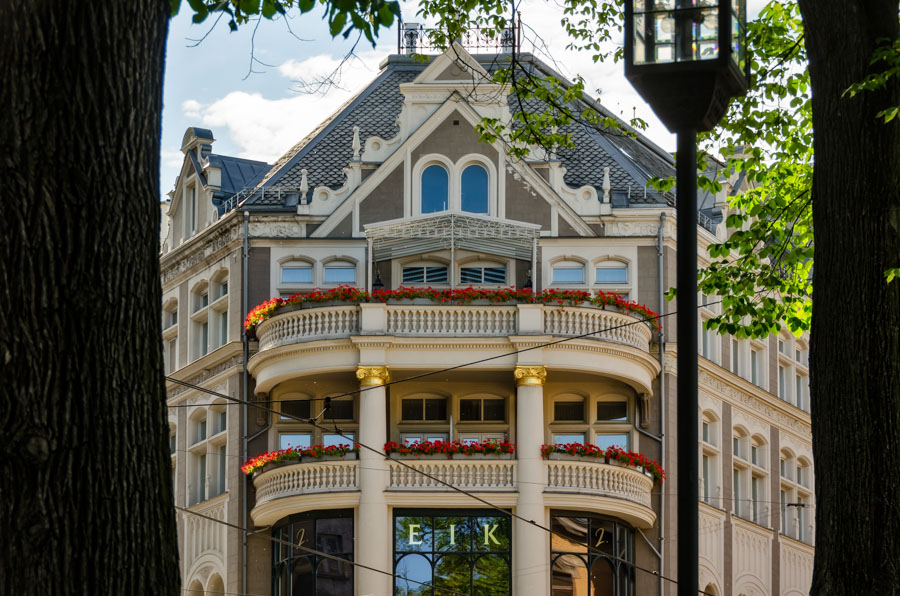 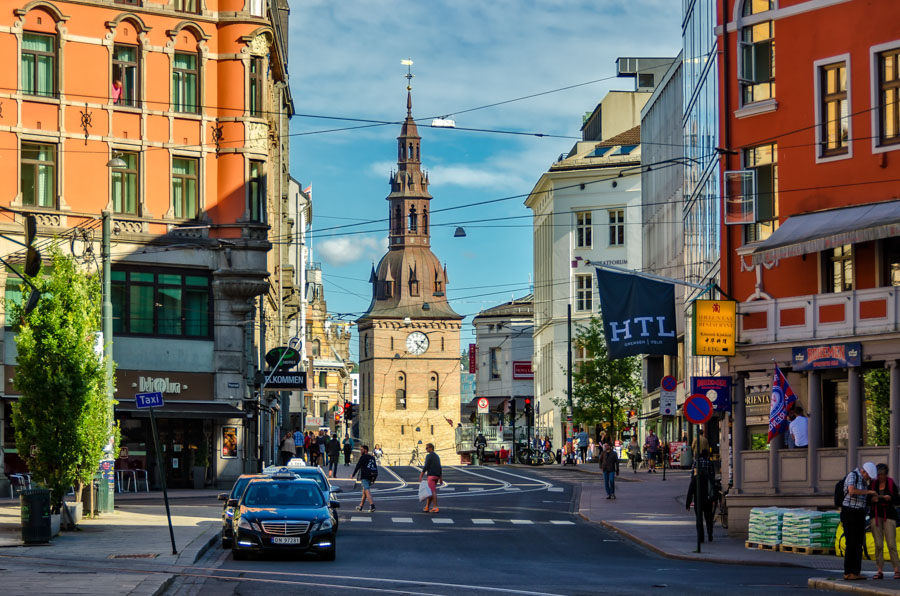 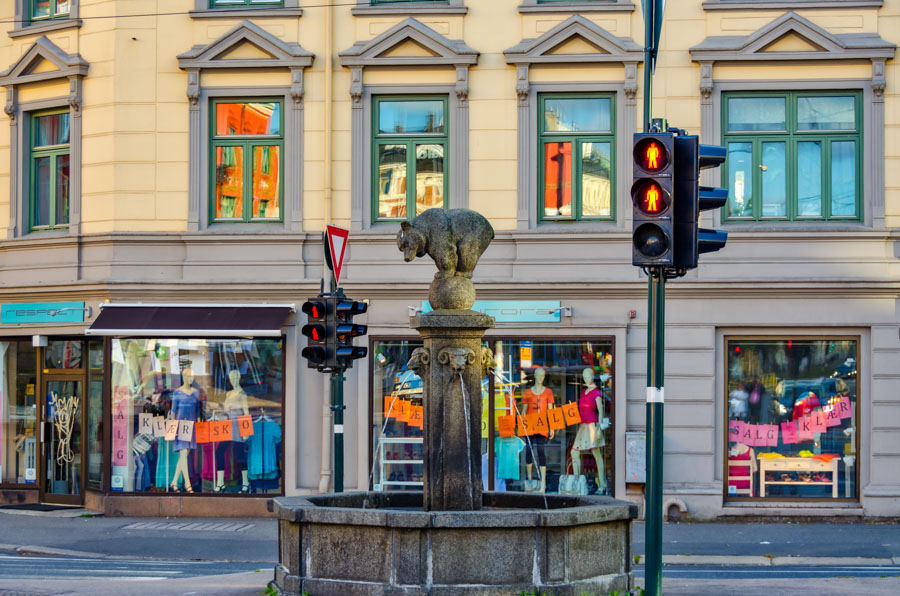 Rain bothered us only intermittently while in Oslo – and allowed for this opportunity to catch the moment when it stopped on one occasion. 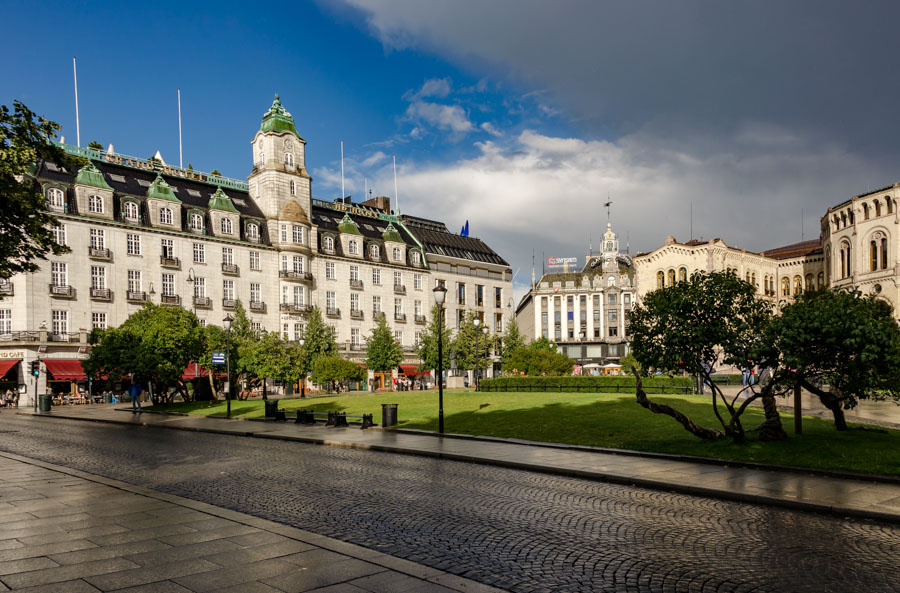 As you can probably surmise from the last few shots, the automotive traffic in the center of town is tranquil to the point of being barely existent. Surprisingly, among the few cars we saw passing by, there was a significant percentage of vintage vehicles, more so than anywhere I’ve seen. I only managed to capture one of these beauties while it was stationary. 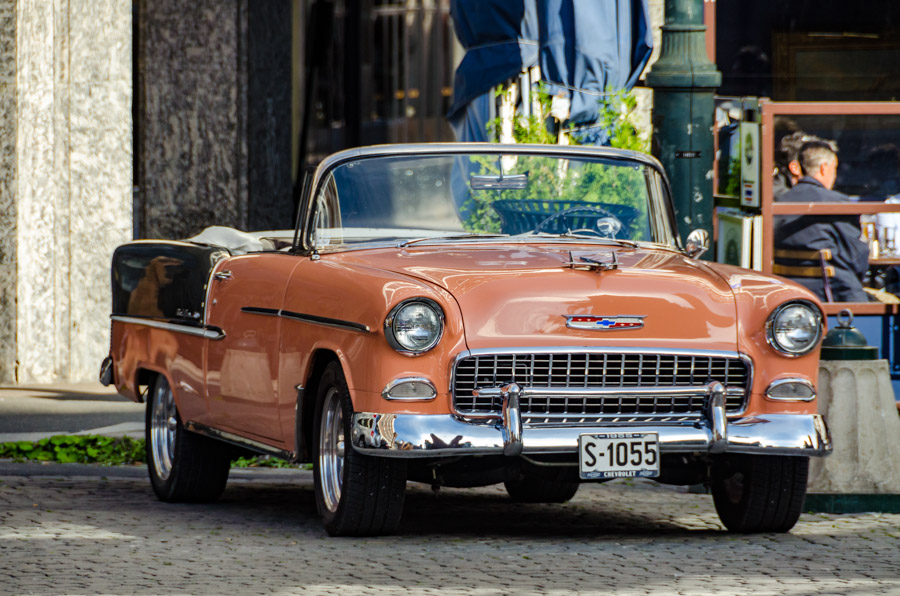 Among the best museums in Oslo is the Viking Ship museum, which showcases three ships in different stages of preservation along with a treasure trove from a viking burial, and the very impressive Fram museum, which allows you to walk around the famous polar ship and provides wealth of information about science and the history of polar exploration. 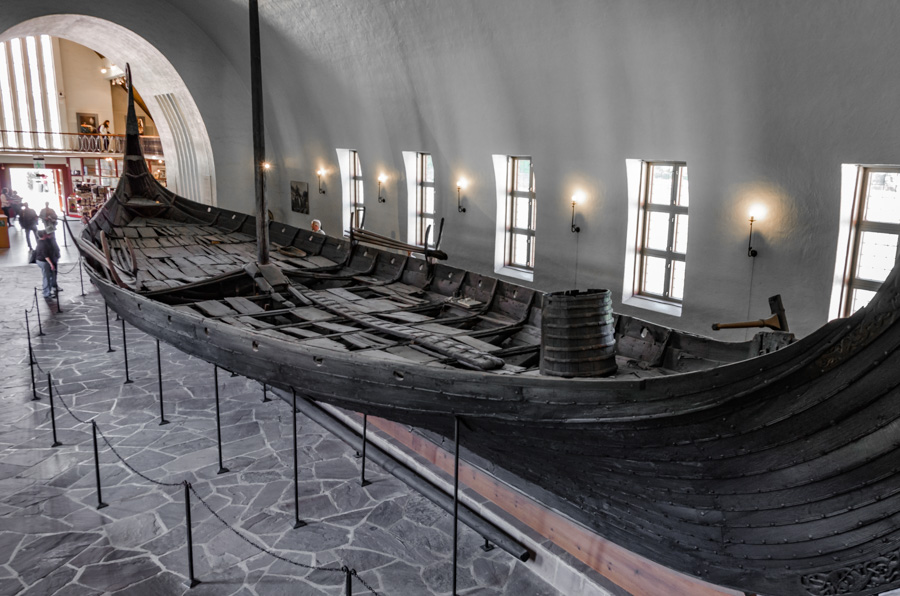 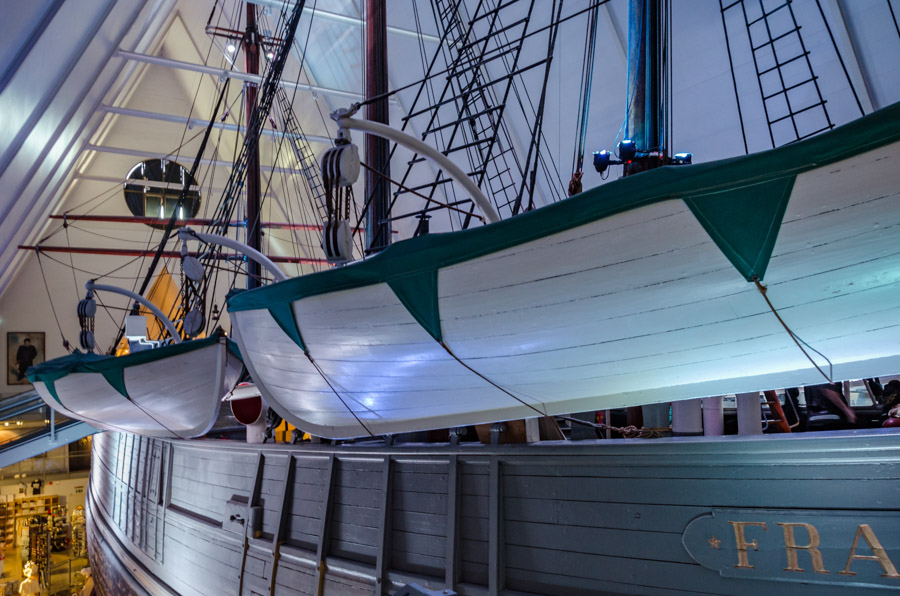 And another sculpture, so to speak. This is called the Liberté project – a trio of working toilets doubling as an artistic installation which is meant to celebrate France as the inventor of both the highest and the lowest institutions of a modern society: a democratic constitution and public toilets. As one website puts it, it “allows an intimate relationship with its audience; the visitors fulfilling the work, performing inside.” 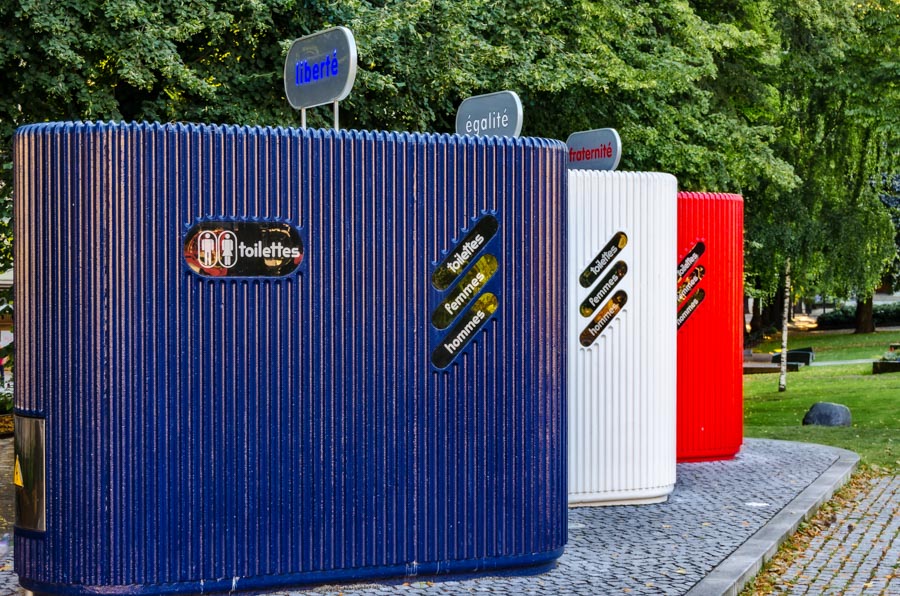 I don’t know if I would be able to put on a proper performance under such hallowed motto. Your mileage may vary.

There is one other attraction in Oslo that for me rises to the level of fascinating and unique, but it is worth a separate blog entry. Stand by for that. I am also splitting the excursion around Oslo fjord into a separate essay. Which creates a bit of a paradox: A city declared the least impressive of all of the stops on the itinerary is providing plenty of material for these pages. Thank you, Oslo – is all I can say.

These and quite a few other pictures of Oslo have been uploaded to the Flickr Oslo album.