As I posited a number of times on these pages, I combine secular attitudes with healthy dose of admiration for religious architecture. Due to the European-centric nature of my travels to-date, a few synagogues and Mezquita aside, most of such architecture that I encounter is of ecclesiastical nature. Since I rarely pass a chance to step inside a church for sometimes very quick or sometimes rather detailed look, I have to admit that after a while they start to blur. Each church obviously has its individual features, but without a truly standout or unique one – think Brunelleschi dome in Florence or the colorful domes of St Basil’s in Moscow or “whispering gallery” of St Paul’s in London – I recently find myself struggling to recall a defining element of many cathedrals that nonetheless appear marked as must-sees in my travel notes.

Roskilde Cathedral offers its standout feature on approach. It is built of bricks. Although I have seen one or two Brick Gothic buildings in my past travels (as well as a couple more later on this same trip), this is my first major point of interest where I have been actively aware that a magnificent edifice is made of bricks, as opposed to stone slabs. It helps to appreciate the architectural accomplishment when you recognize its relative uncommonness.

The cathedral is recognized by UNESCO as the earliest example of northern-european brick-built building which continued to influence religious architecture for hundreds of years. The original brick structure was built in 12th-13th centuries and then royal additions happened through centuries, the latest as recently as 30 years ago. There are plenty of impressive details inside the cathedral, and quite a number of lavishly executed royal tombs.

My photography remains lacking in that I cannot convey the magnificence in pictures. The task was not helped by the fact that the cathedral is fairly closed in by surrounding buildings – and I did not manage to find a remote elevated viewpoint to attempt to take the whole structure in. The exterior shots only reveal the cathedral in fragments. Here are a couple. 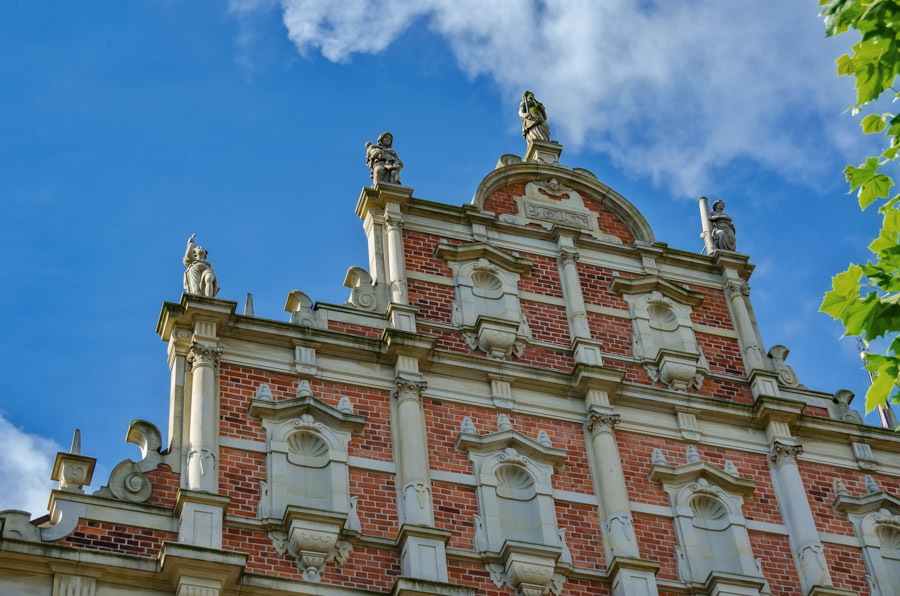 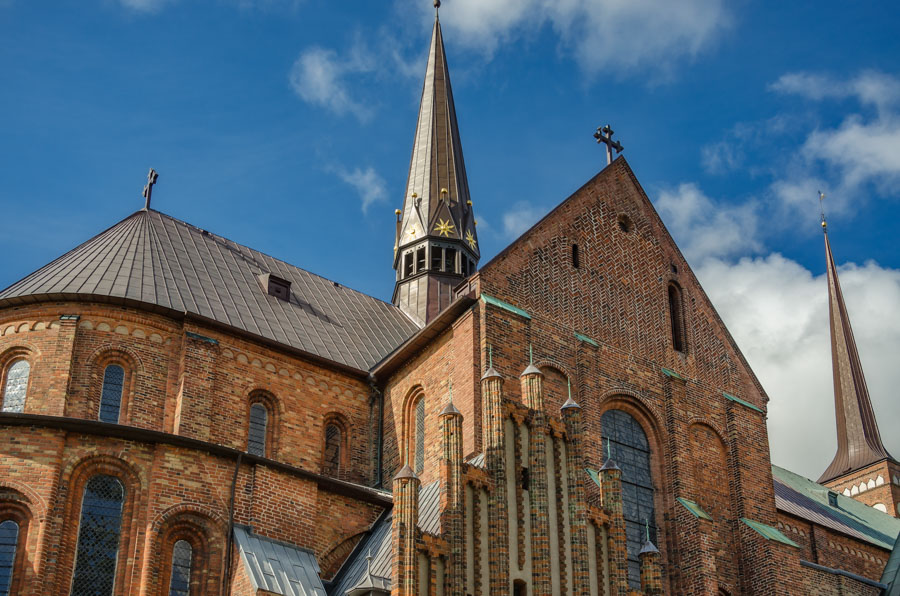 The view along the nave away from the altar. 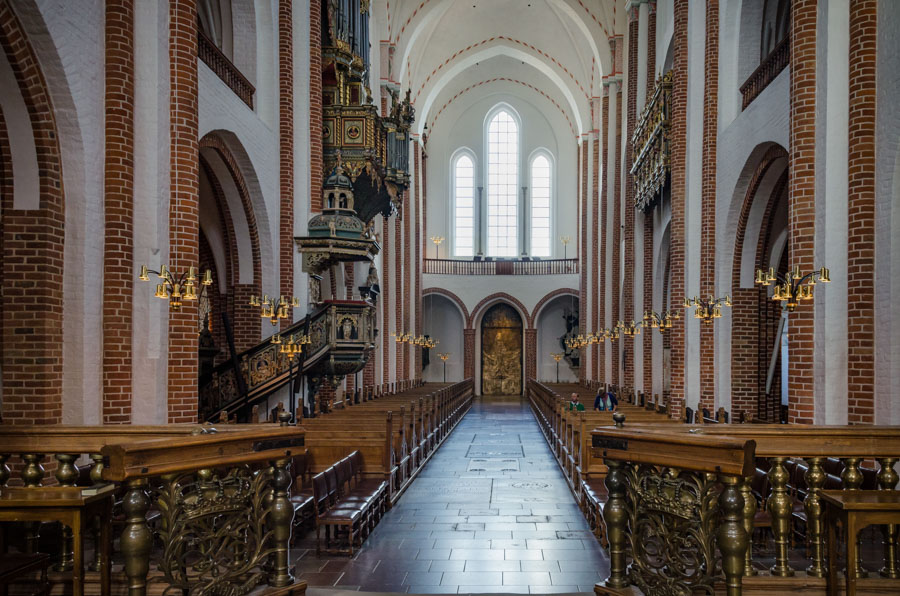 Pulpits are always among my favorite details of any church. 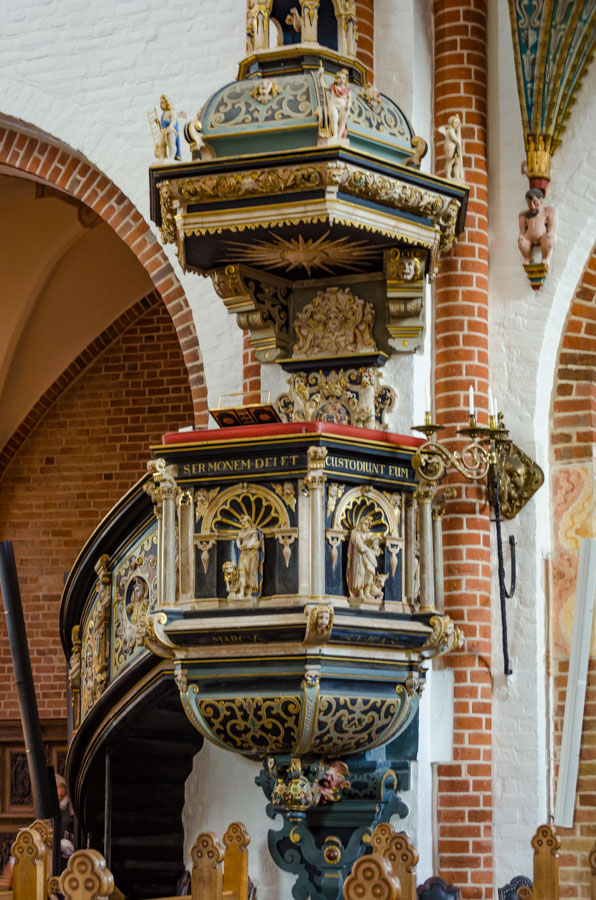 A view towards altar from the upper gallery. 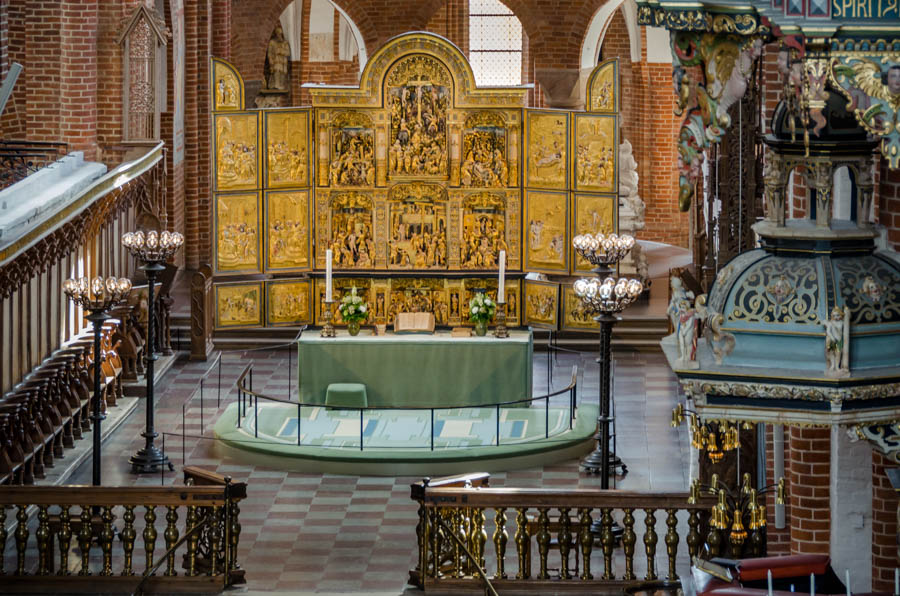 King Christian IV’s private box is one of the most jaw-dropping features of the cathedral’s interior. 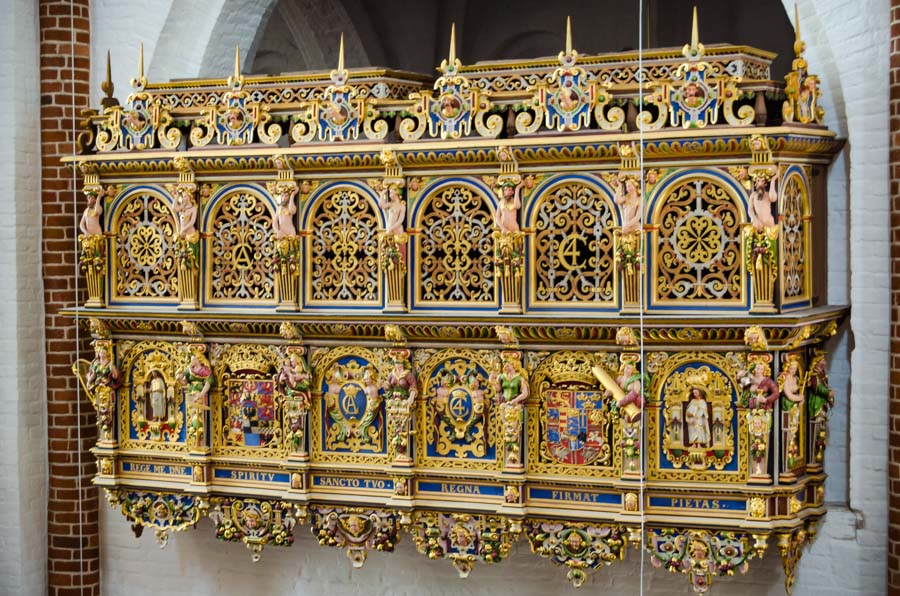 Of the many chapels in the cathedral each is impressive in its own right, and each is centered on a deceased royal family. Below is one of the chapels that happens to originate with the already mentioned king, Christian IV. 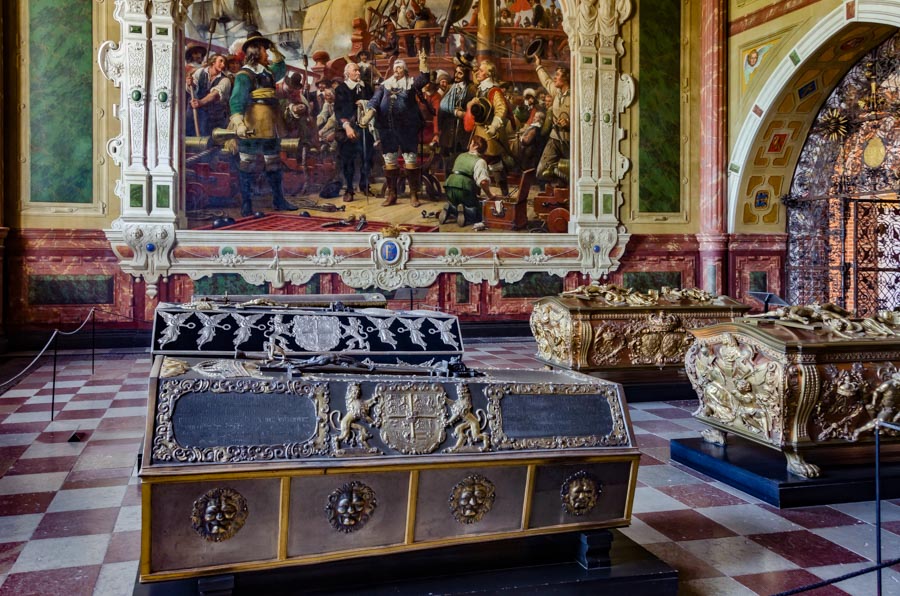 I will remember this foremost as a “brick cathedral”, but overall it is an outstanding example of sacred architecture, well worth its UNESCO designation.

These and other pictures of Roskilde Cathedral have been added to my Copenhagen Flickr album (scroll to the second page).

Roskilde can be reached in about 25 minutes from the main Copenhagen station via trains that run at least once every 20 minutes at off-peak times. A 10-minute walk from the station through the town center will take you to the cathedral. There are other points of interest in Roskilde (for instance, a viking ship museum) that may be worth checking out if you come to town with more than a single purpose in mind.