Northern European capitals get short shrift when compared to their more southern counterparts. The overall “tourist attraction quotient” – including things like can’t-miss museums, famous art collections, street ambiance, food scene, night life, etc. – is probably lower in places like Copenhagen or Stockholm compared to the likes of Paris or Rome.

To say nothing of the weather factor.

Nonetheless, Copenhagen – the first stop on our recent itinerary – did its best to charm with its colorful and grand architecture, intimate and wide spaces, impressive points of interest, and sufficiently non-threatening skies. (We also had superb culinary experiences on every one of our nights in town, which obviously only helped the overall impression.)

Here is the view of the city center from the viewing platform atop Church of Our Savior. 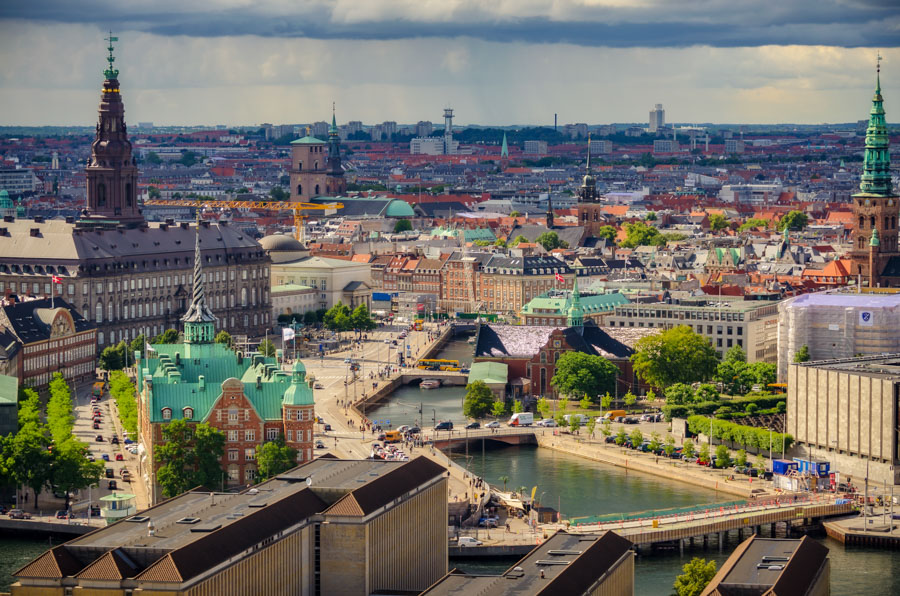 The dominating tower on the left belongs to Christiansborg Palace, one of four major royal palaces inside the city boundaries. It is now primarily the seat of government, in addition to allowing access to the royal apartments and two other museums.

The winter residence of the royal family, Amalienborg, holds daily changing of the guard ceremonies that are a big tourist attraction. If you ask me, the ceremony is quite boring, but when the crowds disperse afterwards the view of the square and the Marble Church nearby is fantastic. 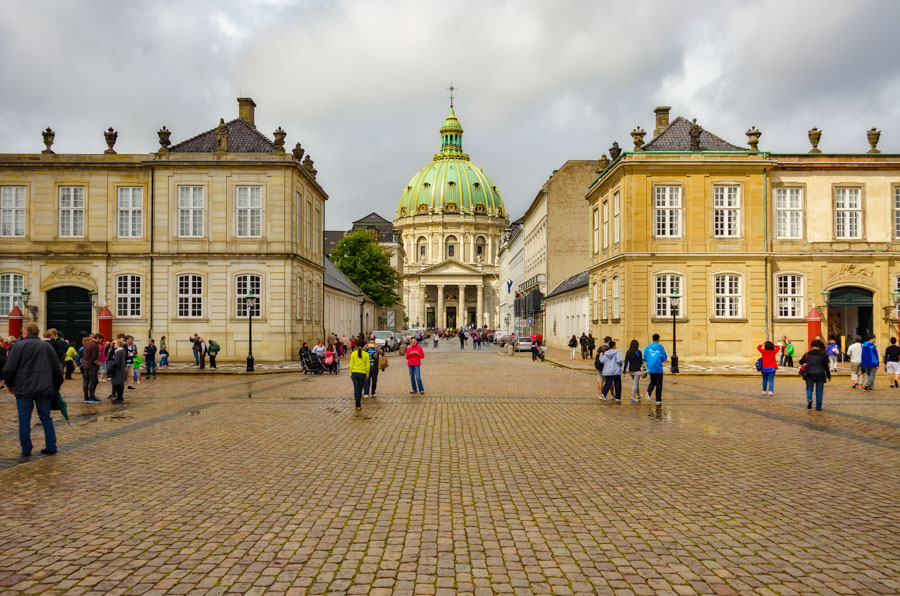 “Marble Church” is a nickname, officially this church is called Frederik’s – and it is one of the most impressive churches in town, in no small part on the account of its massive dome. Among the statuary under the dome are these saints that are seemingly engaged in some theological disagreement. 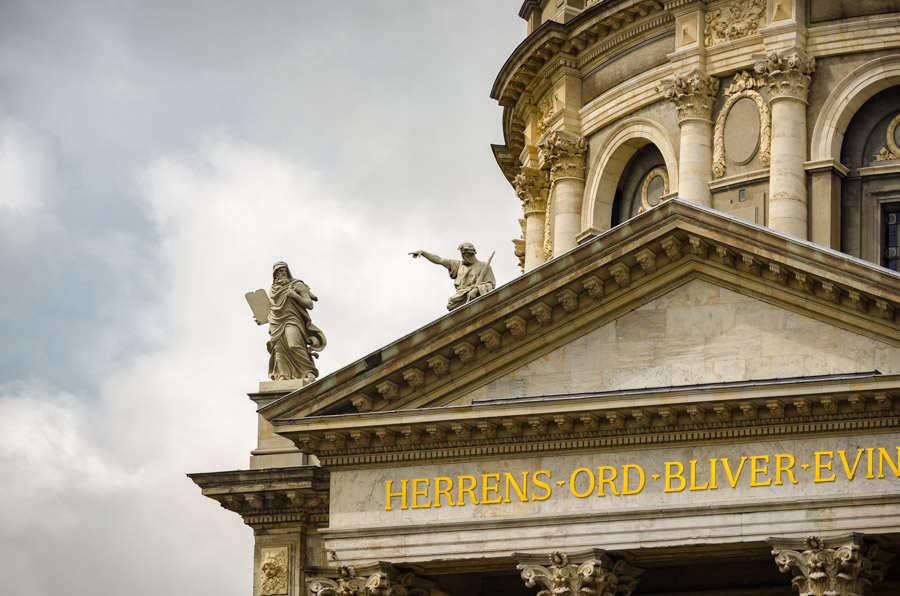 One of the most striking buildings in Copenhagen is the Old Stock Exchange, built in 17th century. 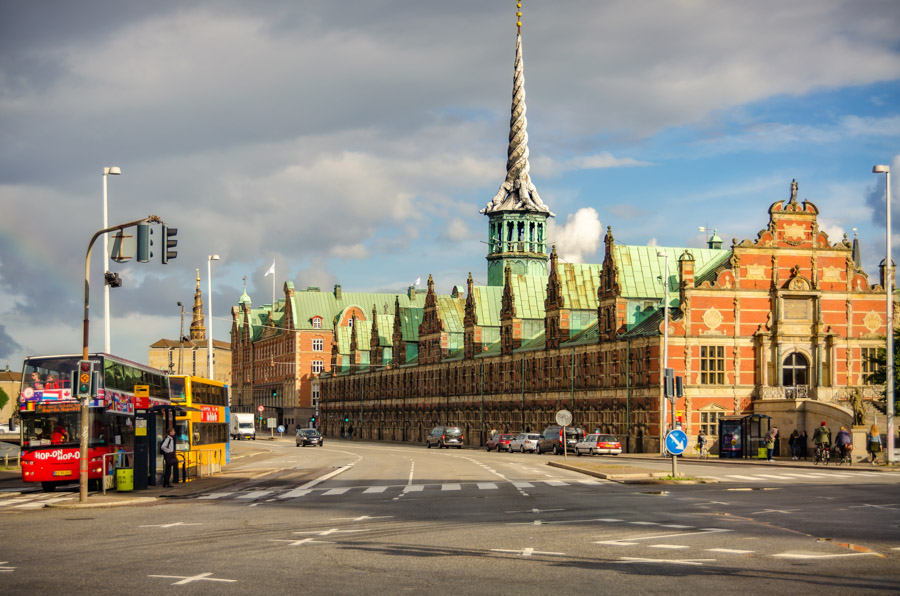 Caritas Well (Caritasbrønden, in Danish) is the oldest fountain in Copenhagen, over 400 years old now. It sits on a square that is part of the Strøget pedestrain zone in the historic city center. 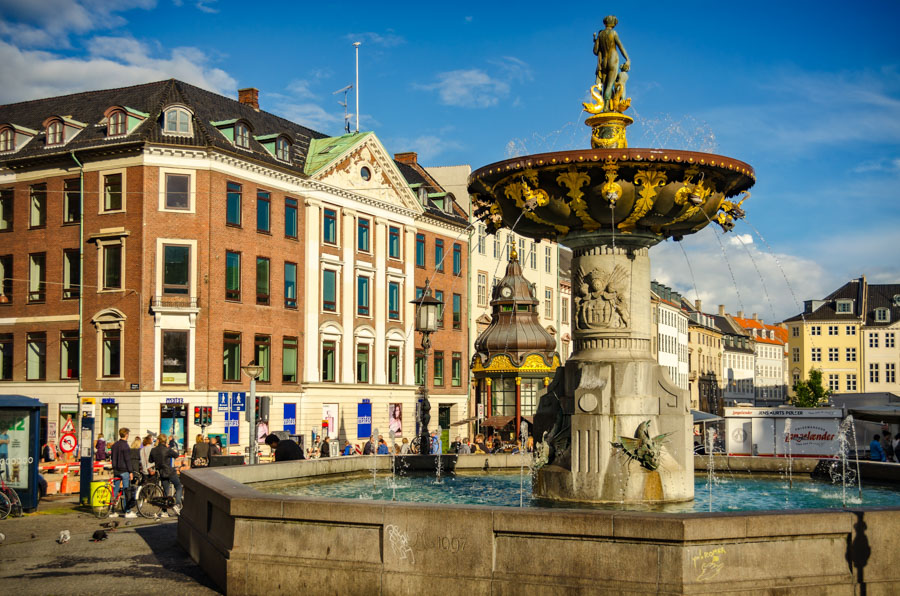 We climbed not one but two elevated points in Copenhagen. The tower of the Church of Our Savior that provided the opening shot of this essay is a more celebrated – and, in a sense, more exciting – high viewpoint, but the platform atop the Round Tower is easier to reach, offers more space, and I would argue facilitates better perspectives of the city roof line.

Here is one shot from Round Tower (Rundetårn, sometimes spelled as Rundetaarn), with the spire of St Peter’s Church in focus. 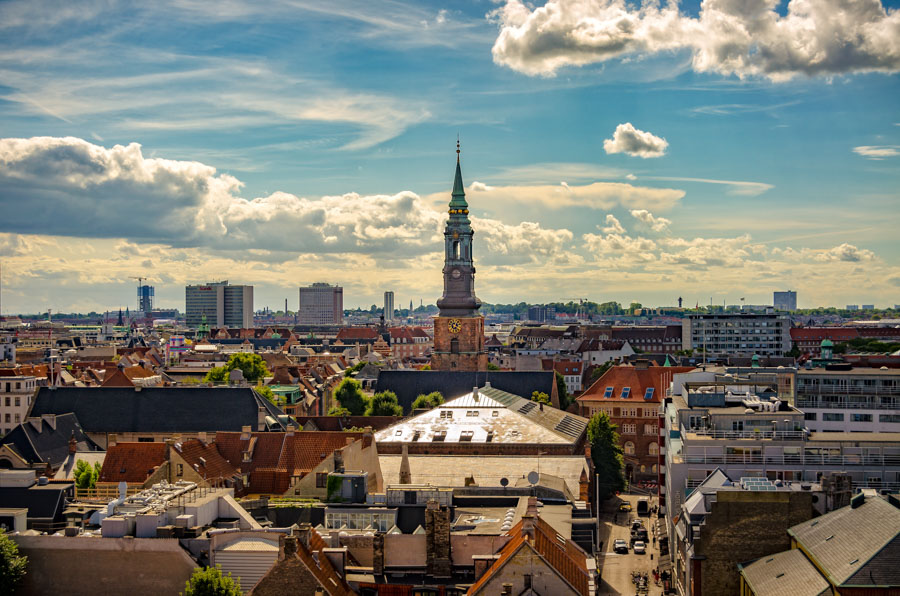 And another perspective, with the imposing tower of St Nicholas Church in the foreground and the Church of Our Savior (Vor Frelsers Kirke) seen farther back. 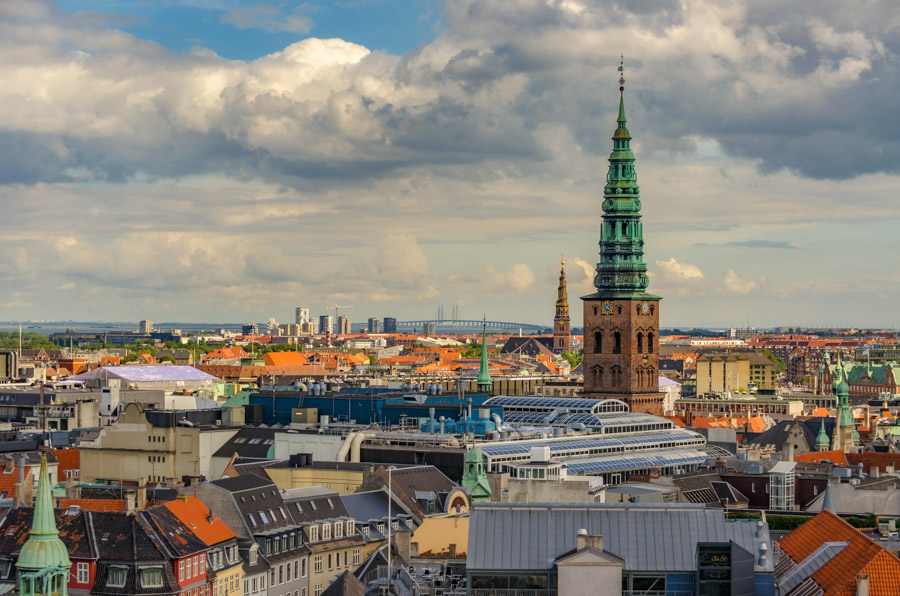 And a view over one of the pedestrian streets of central Copenhagen, Købmagergade. 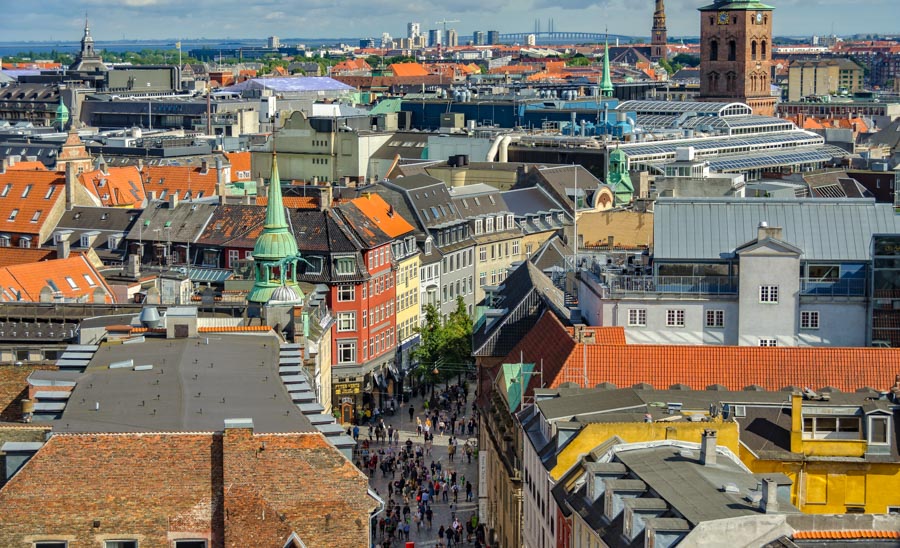 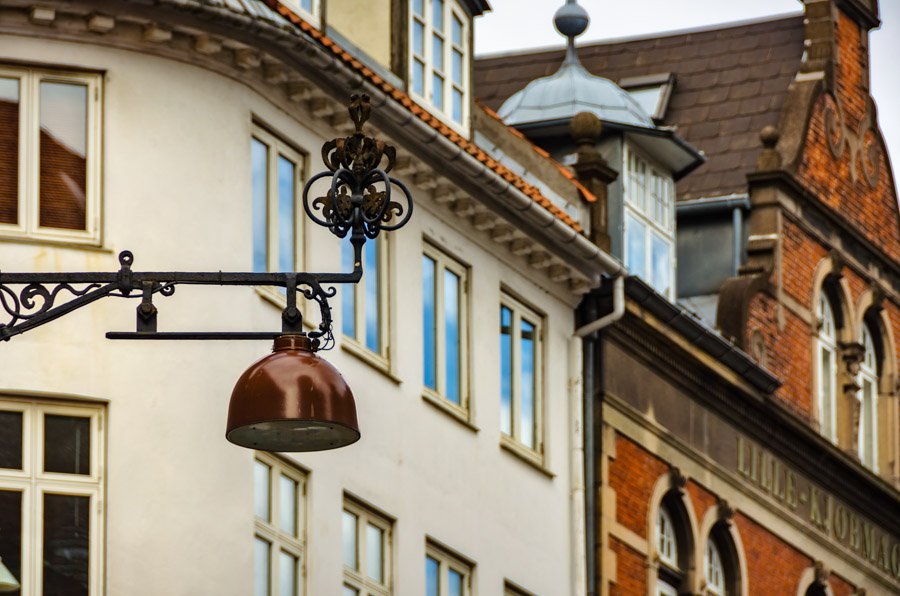 I made no records and have not been able to figure out what this statue on the leafy square next to Round Tower may represent, but it made for a nice composition. 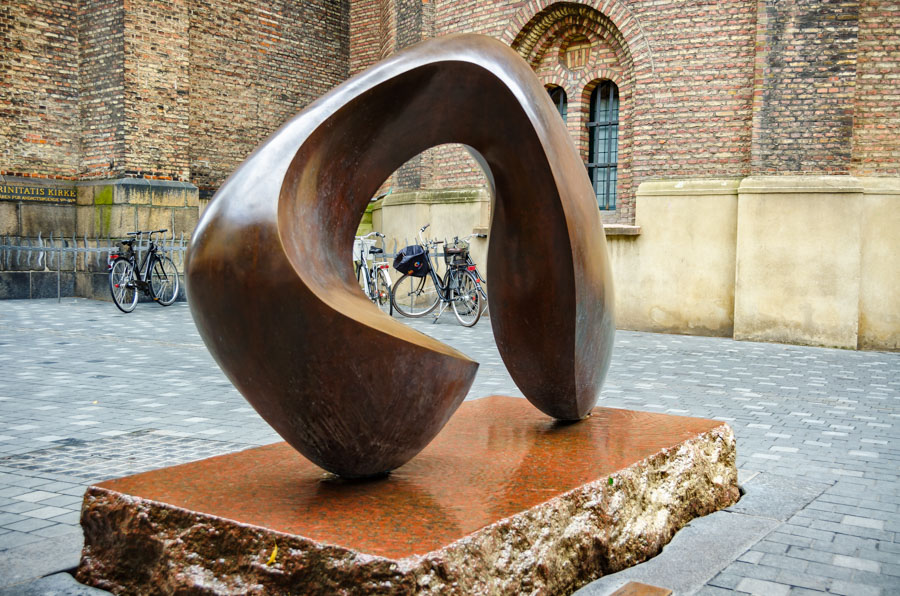 One of the most colorful areas not just in Copenhagen but in all of Europe is Nyhavn. It was awfully hard for me to pick just a couple of shots of its canalside buildings from among many for this essay. 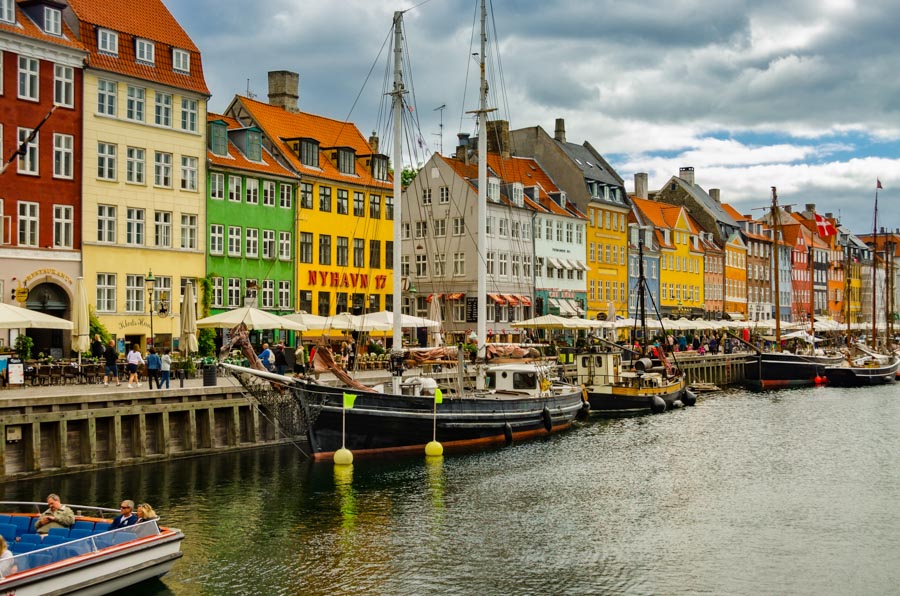 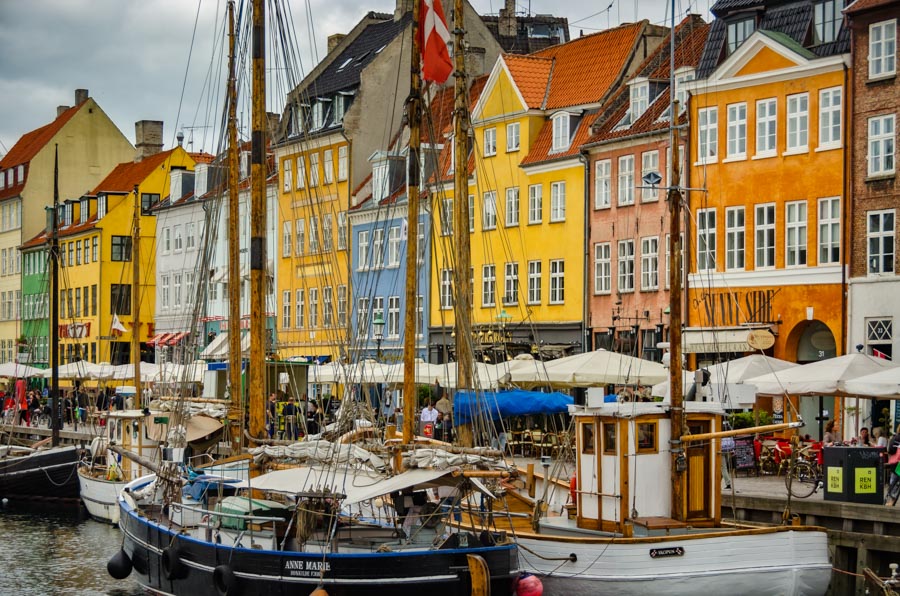 Love locks craze is everywhere. Copenhagen is no exception. 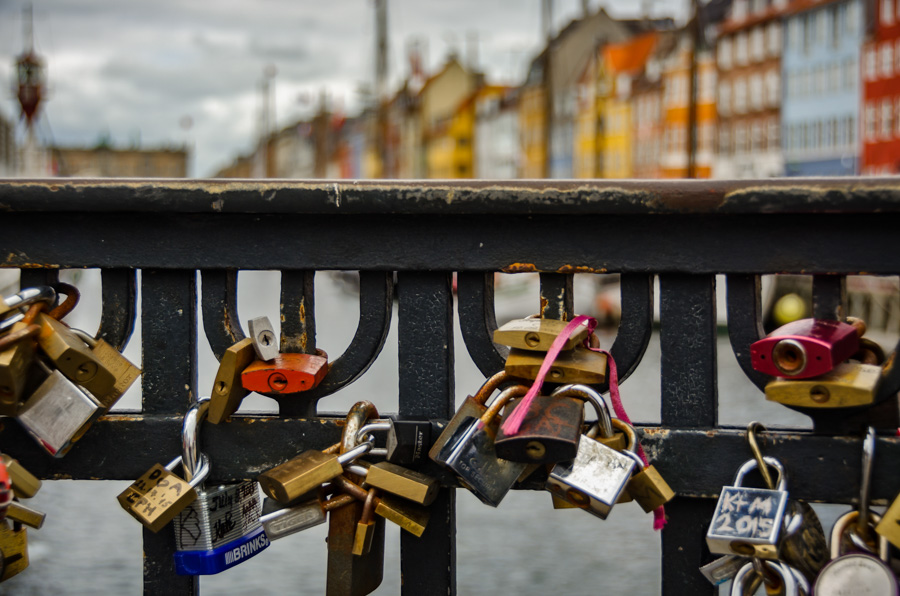 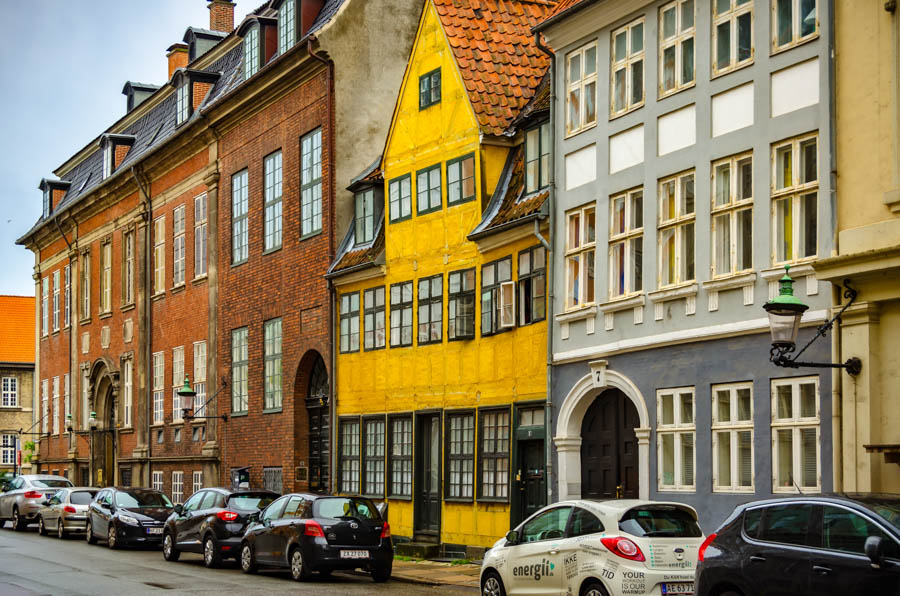 Sometimes it is not the house itself but a shop sign at the entrance that attracts attention. 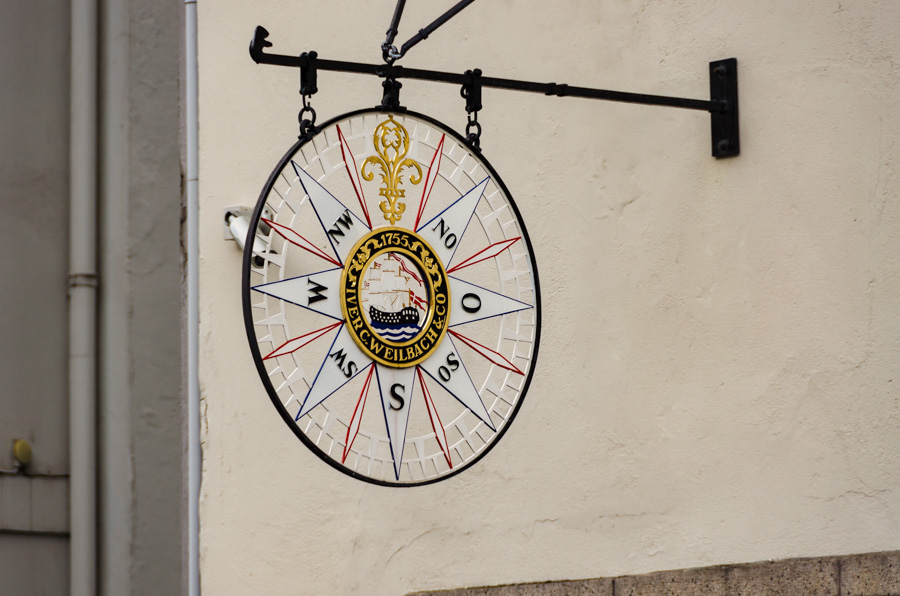 The mix of old and new architecture is frequently seen in different parts of Copenhagen. This juxtaposition of Christian’s Church and some harborside modern buildings is an example. 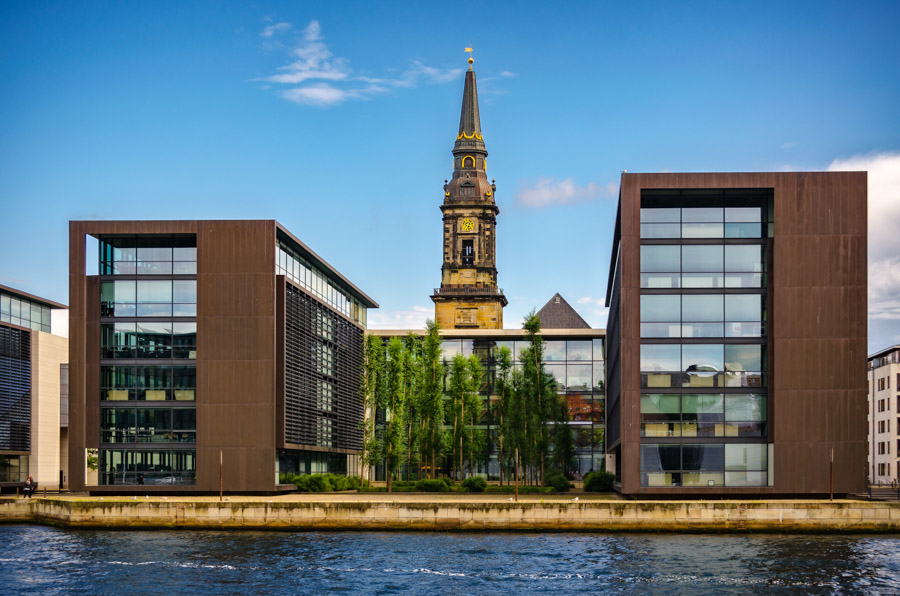 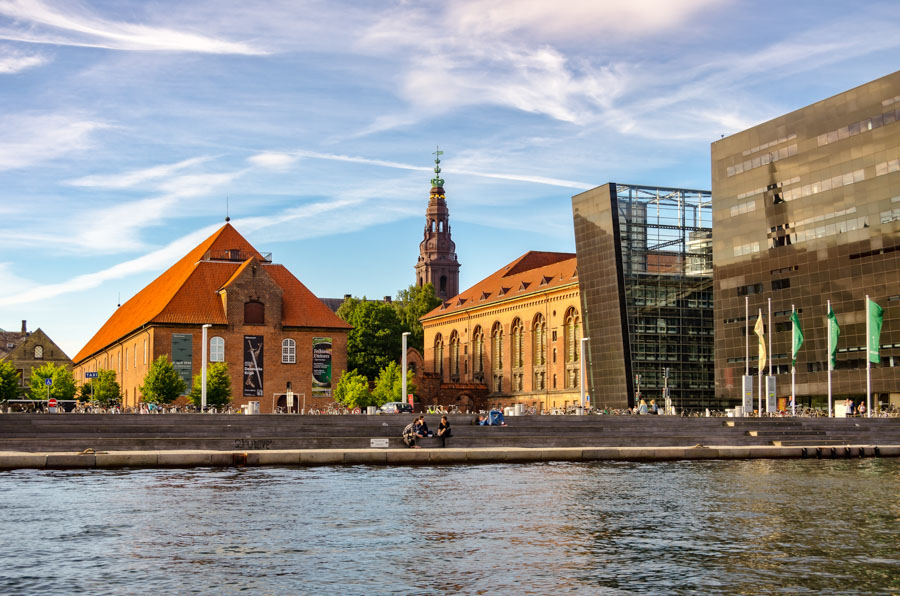 Rosenborg Castle Gardens (frequently called Kongens Have, or King’s Gardens) is the large tranquil park in the city center that is home to several diversions. Rosenborg Castle, in the background of the next shot, is my favorite of the royal palaces in Copenhagen, both exterior- and interior-wise. 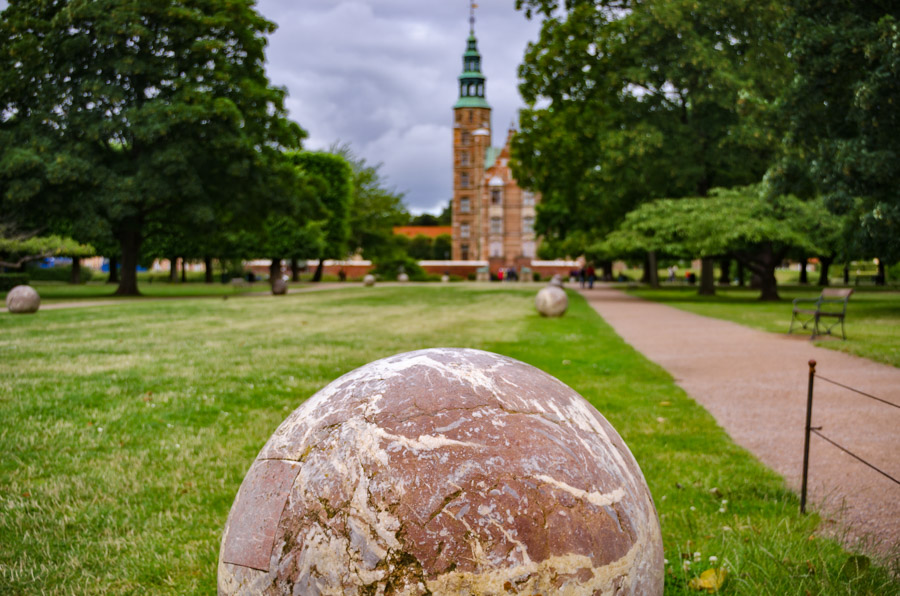 This fearsome earth-bound gargoyle and its brethren guard the City Hall. 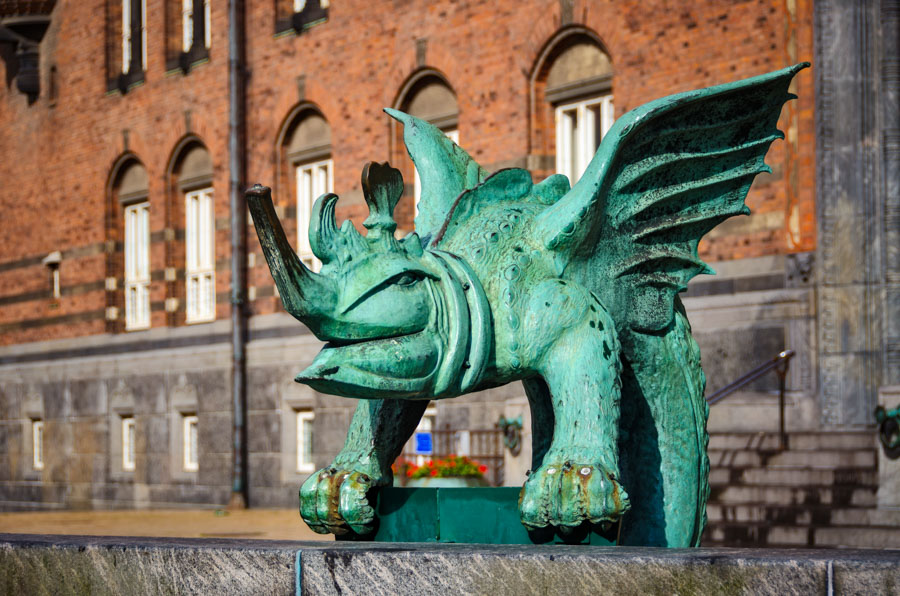 And around the corner one can find a statue of one of the most famous Danes in history, Hans-Christian Andersen. 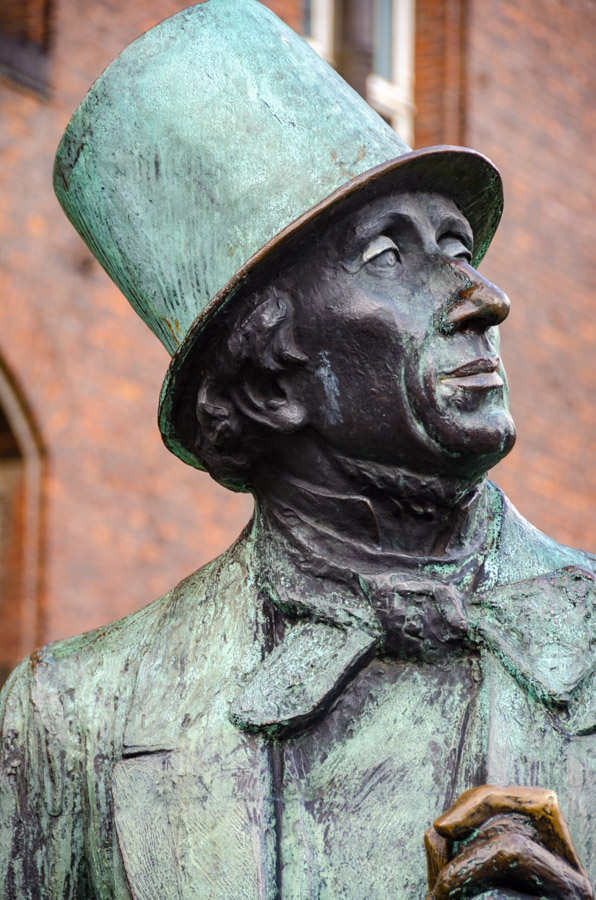 There is also an Andersen statue inside Kongens Have.

Another point of interest related to Andersen is the statue of the Little Mermaid, located on the waterfront to the north of city center. The sculpture is one of the most popular attractions in Copenhagen, but I would be hard-pressed to explain why. 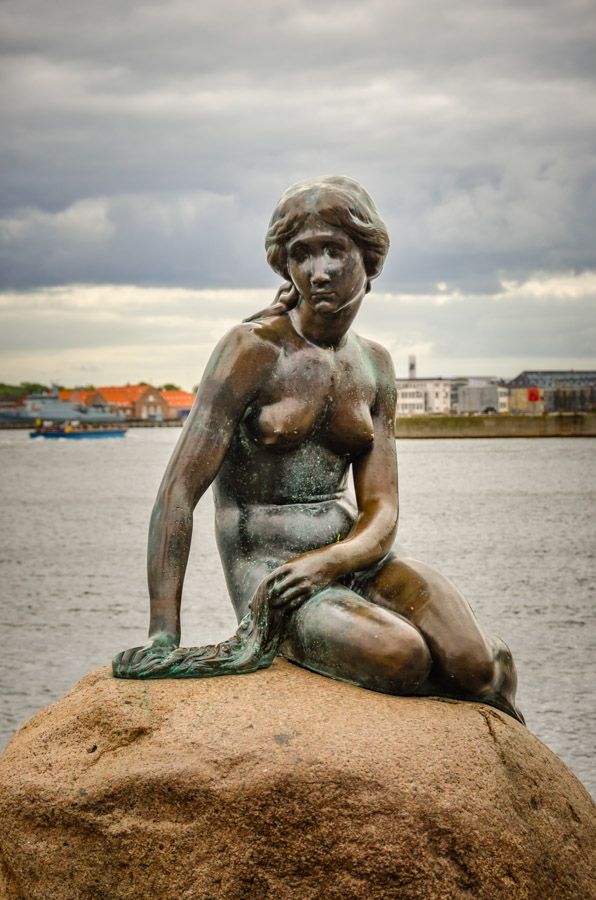 It is a nice sculpture, I suppose.

On the way to seeing the Mermaid, one can pass the impressive Gefion Fountain and the beautiful Church of St Alban. 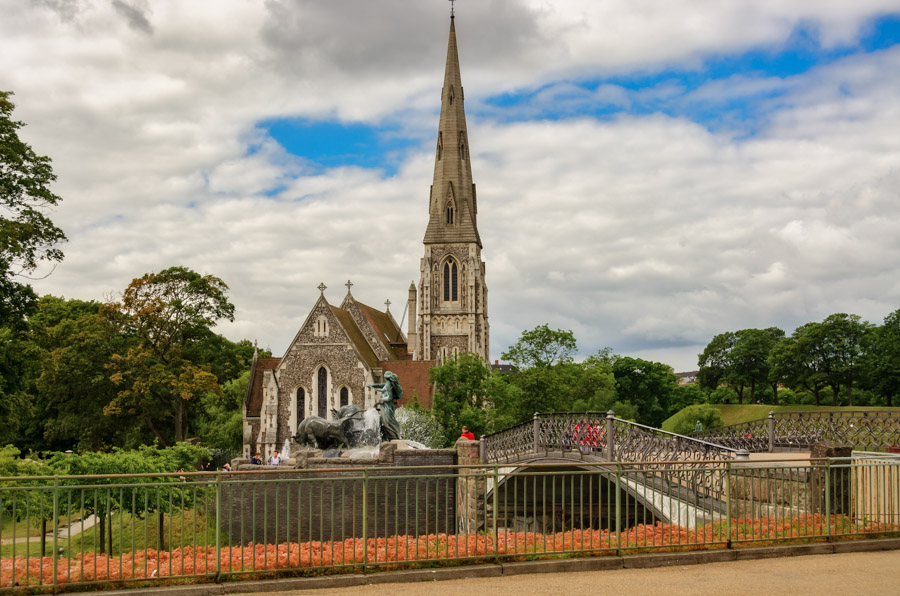 Old Navy barracks are a frequent feature in different areas of town. These days, some house small museums while others are being redeveloped into residential or business spaces. 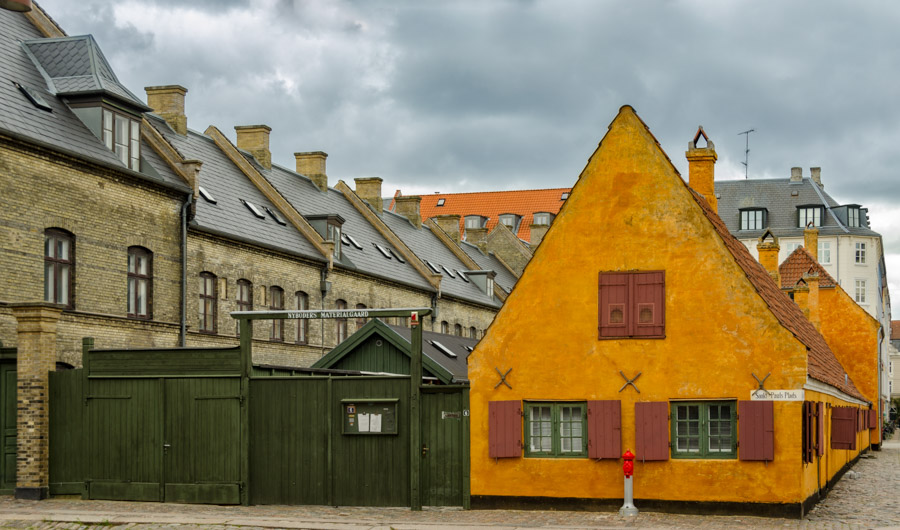 Christianshavn is a residential area to the south of historic city core with a lot of attractive architecture and appreciable laid-back feel. The main canal that goes through it is chock-full of boats. 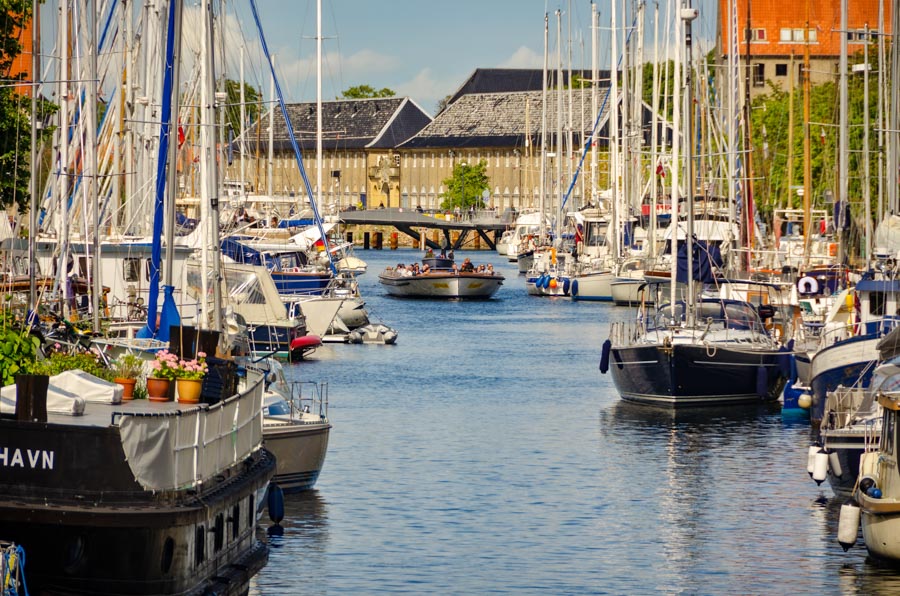 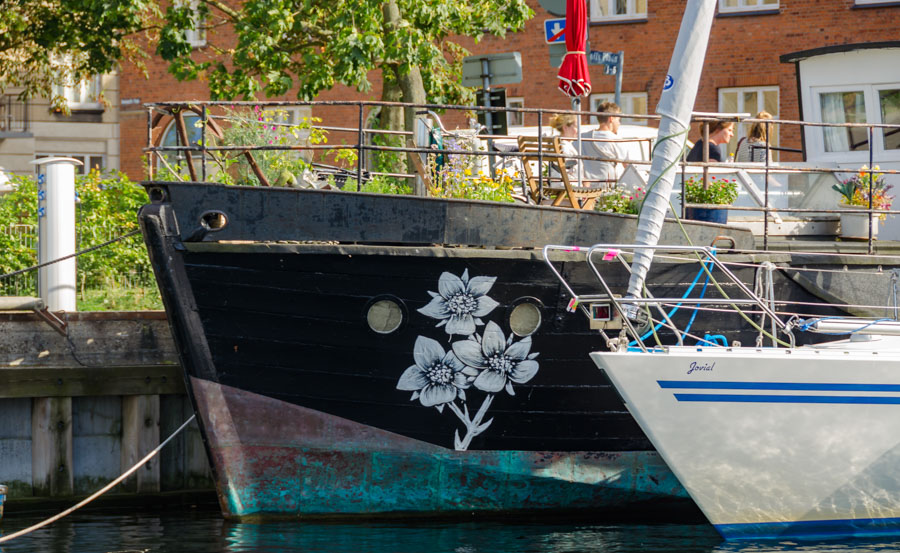 Here is a street in Christianshavn which is home to the already mentioned Church of Our Savior. 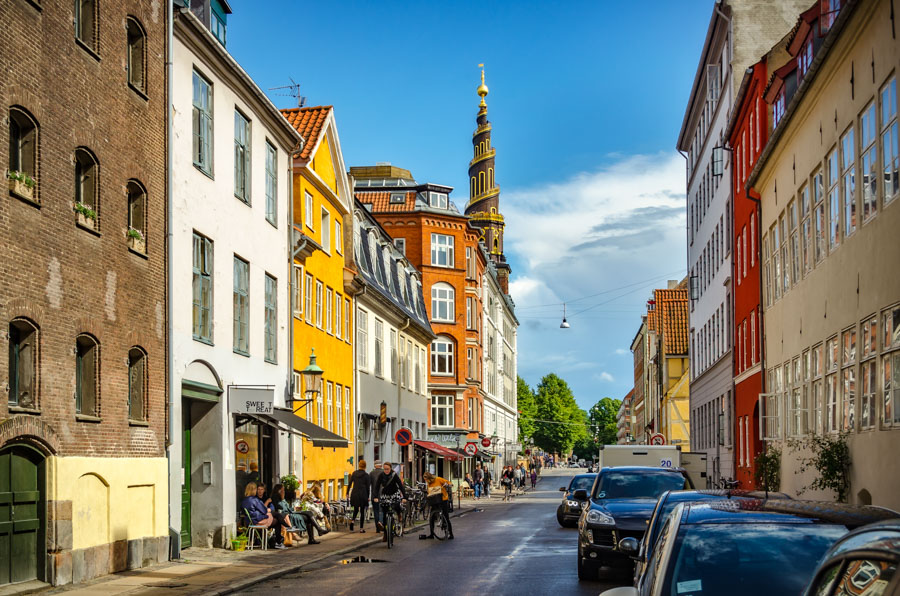 You can see the exterior spiral stairs that lead to nearly the very top of the church – yes, we climbed that, how could we not!?

Overall, Copenhagen certainly achieved a “would like to come back” status in our hearts. There is plenty to see and do and plenty to admire.

These and nearly a hundred other shots from Copenhagen can be seen in a new Flickr album.