Having had my fill of boisterous city scene in Amsterdam, I spent the last few days in Netherlands driving around the country in pursuit of my World Heritage obsession – and more serene locales.

Netherlands, as the name implies, has a large portion of its territory barely above or even below the sea level. Over the centuries, the Dutch had to continuously adapt to living in – and eventually conquer – their watery environment. Several UNESCO sites in the Low Countries are a testament to that battle and conquest.

There are about three thousand polders in Netherlands, and Beemster Polder is inscribed on the World Heritage list as an exceptional example of such reclaimed land. You have to read through the description and recognize the magnitude of the task and the ingenuity of human enterprise over four centuries ago in order to truly appreciate this place. Looks themselves do not do it justice. It is certainly awfully cute and eye-pleasing, but one can say the same thing for uncounted locations in the country. The fact that in the age way before industrial revolution a barely habitable landscape was remade into what we see today is what makes this place special.

Here are a couple of views in the village of Middenbeemster, to emphasize the cute factor. 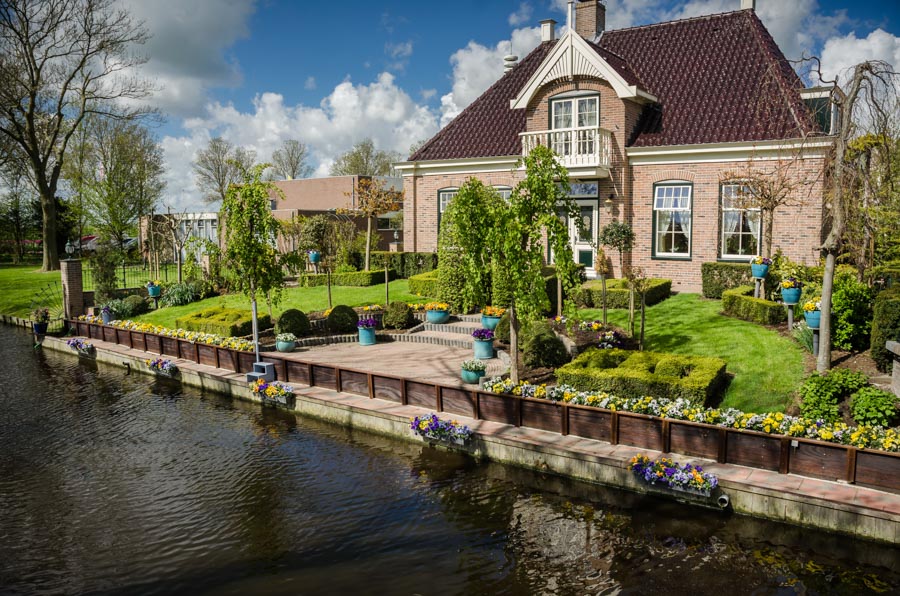 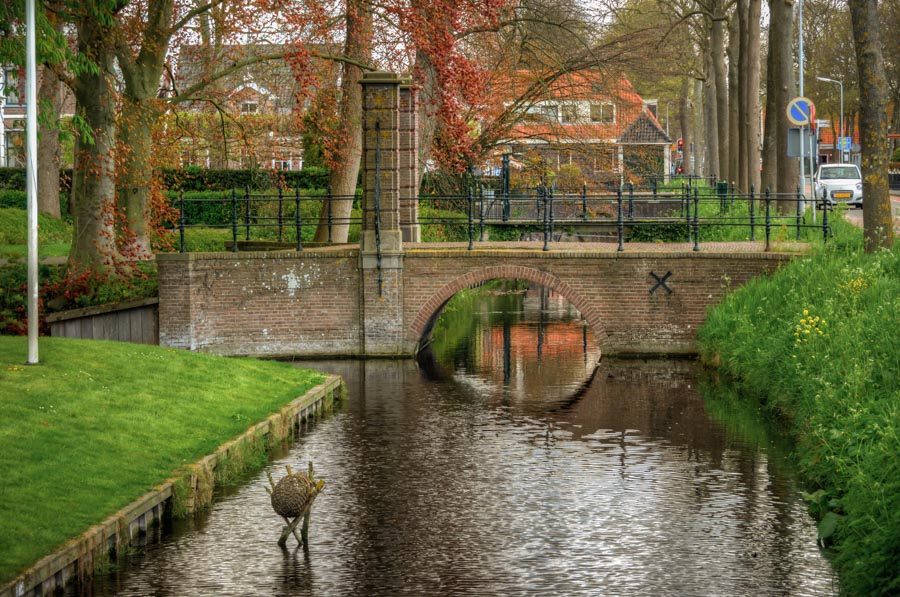 The main church in the village – called Keyserkerk, after one of its principal architects – offered me a welcome confirmation of the power of curiosity. The church is open to visitors only on weekends. I was in the area on a Thursday. Nonetheless, I walked up to the entrance and inquired of the custodian if I could take a quick look inside. The man, who appeared to be busy with cleaning up after some recent event that had taken place in the church, stopped what he was doing and graciously invited me in. He even gave me a brief historical overview of the church. One might think that he welcomed the diversion but I would also like to think that he appreciated my interest in something that is an essential part of his life.

What happened next was entirely unexpected. As we were concluding the brief tour and I was about to step outside, I mentioned that I am a big fan of UNESCO World Heritage and that I came to the area specifically to see the polder. He responded, “You know, the best way to see the polder is from the top of the church. Would you like to climb up there?” My eyes obviously lit up and I enthusiastically exclaimed that I would love that. He led me to a very narrow and steep ladder behind the organ, told me not to forget to bolt the platform door behind me when I was done, and left me to climb the steps in solitude.

Now, believe me, no one goes up there in that church unless on specific occasions. Certainly no visitors ever do. The way up consisted of half a dozen narrow ladders leading from one level to another at a steep angle via trap doors. The place is sufficiently dark and quite dusty. A frame not as slender as mine would find it challenging to squeeze through some spaces.

But the views from the platform underneath the church spire were simply breathtaking. My limited mastery of photography cannot convey them properly. Nonetheless, here are a few shots that illustrate the planned nature of the area. 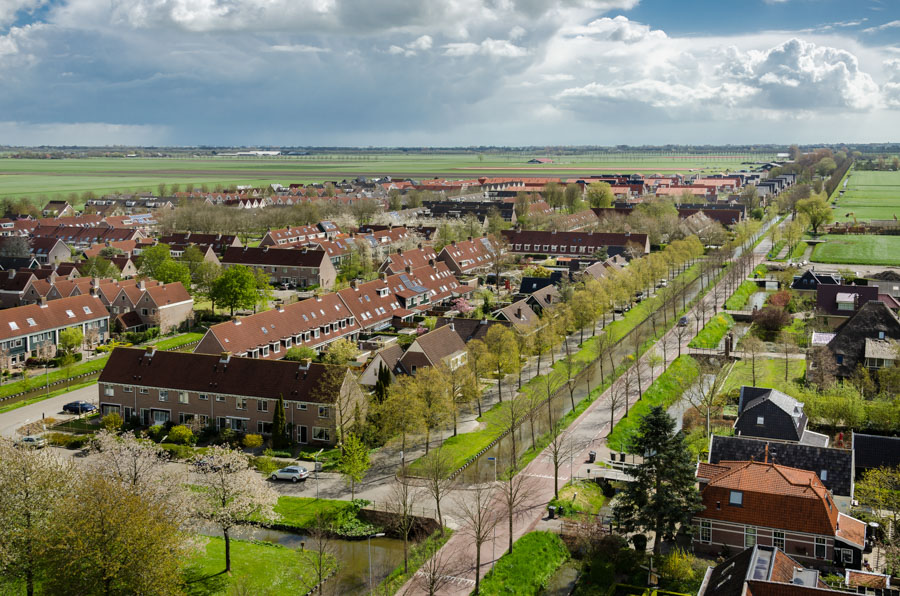 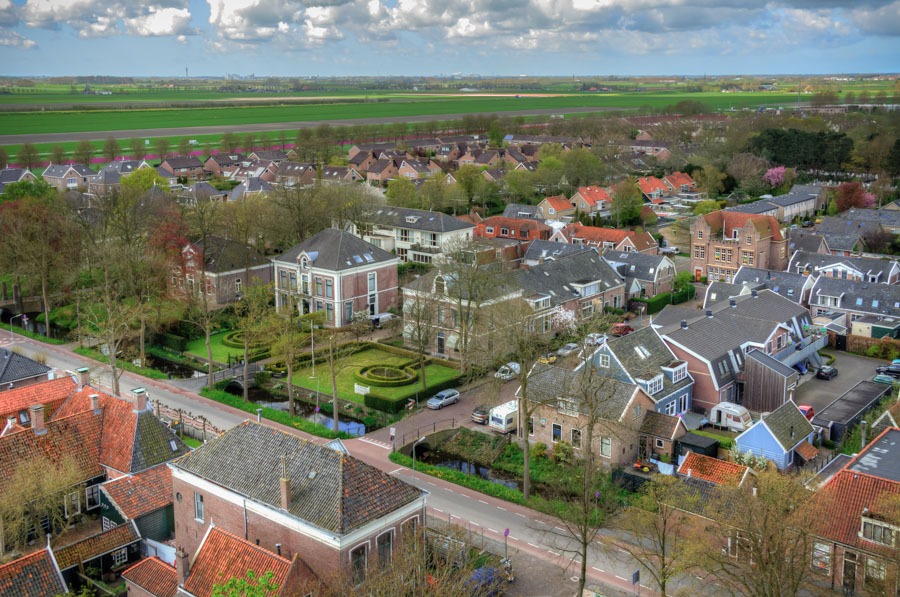 I cannot imagine what moved the custodian to offer me this climb up (which is clearly not something that is being offered habitually to every passerby), but if he aimed to make my day he could not pick a better present.

A couple of hours appears to be a good time allotment to spend in Beemster Polder. There are a couple of minor museums that are open on limited schedule, but the main interest is obviously in just walking in and around the village. Middenbeemster can be reached in about half an hour by car from central Amsterdam and there are also bus services that stop there.

These and a few other pictures of Beemster Polder have been added to my Netherlands album on Flickr.