I love Barcelona nearly unconditionally and it contests with Paris and Rome the title of a European city that I know best aside from London. It has a lot to offer to any type of visitor but works of Antoni Gaudí are likely to feature on every itinerary, however brief or otherwise. And you could hardly do worse than tour his Modernist creations.

Gaudí is one of the few architects whose name is likely known worldwide even by those who have never seen his buildings up close. The style and creativity of his designs put him apart even amongst his fellow Modernists, whose works are also on ample display in Barcelona. (As an aside, I always say that if you can only see one sight in Barcelona, go for Sagrada Familia; but if you can see two, the second one should be the Palace of Music, architected by Gaudí’s contemporary Lluís Domènech i Montaner, and a World Heritage site on its own merit.)

The short and long versions of the UNESCO inscription give slightly diverging lists of properties that comprise the recognized Gaudí collection. The five main ones that are in or around the center of the city are Sagrada Familia, Casa Mila, Casa Batlló, Parque Güell, and Palacio Güell. Of those, only the latter never made our itineraries on the trips to Barcelona, which likely puts it near the top of attractions for our next visit.

Sagrada Familia, though, we visited on no less than four different occasions. Here is the view of four towers and the Nativity Façade, completed while Gaudí was still alive and in charge of construction. 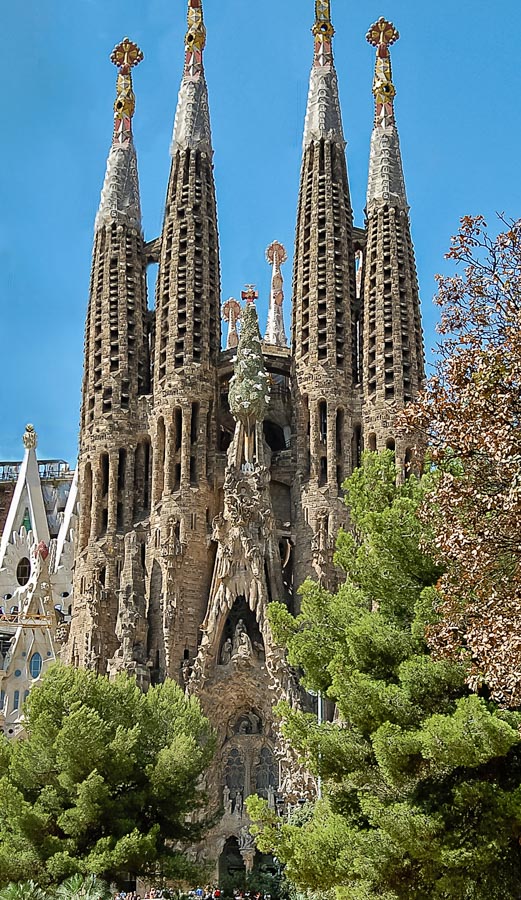 The great church has been under construction for over 130 years, and the work is not yet complete. On the very last visit, in 2011, I was able to view the completed interior (but did not take any pictures). On our previous visits, the church was an active construction site even during the touring hours.

Here is the view of one of the church walls with stain-glass windows from an earlier visit. 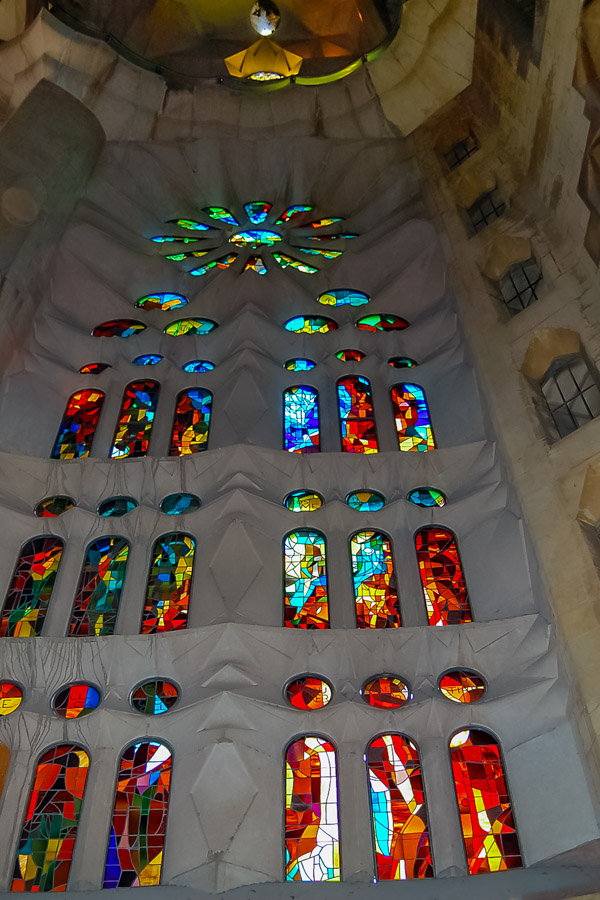 And here are the palm-tree-inspired pillars in the central nave, also from the time of on-going construction. 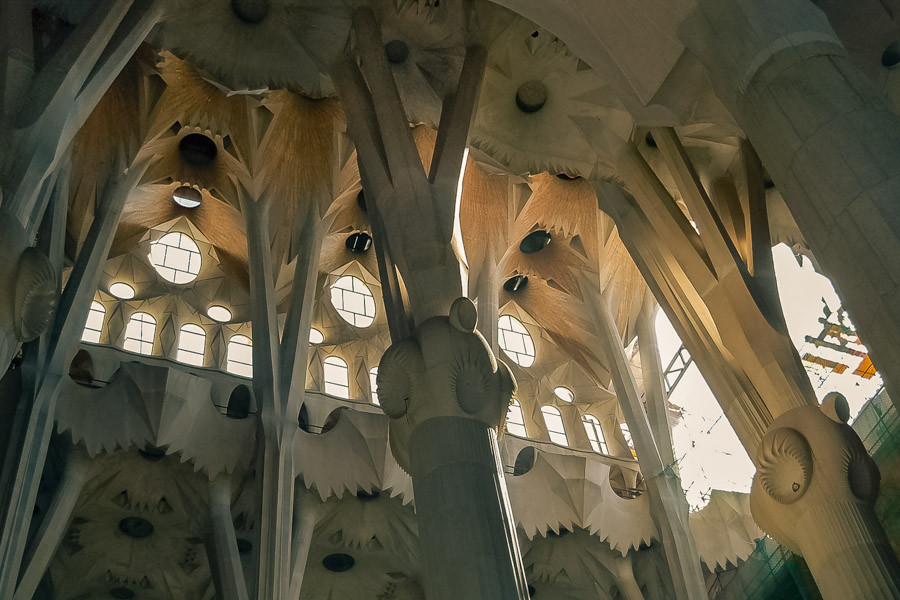 Casa Mila – or La Pedrera, as it is colloquially known – is a remarkable example of inventive civic architecture, a building where no two walls ever join at a ninety-degree angle. But those who toured the building probably remember the most its roof, a maze of fantastically shaped chimneys. 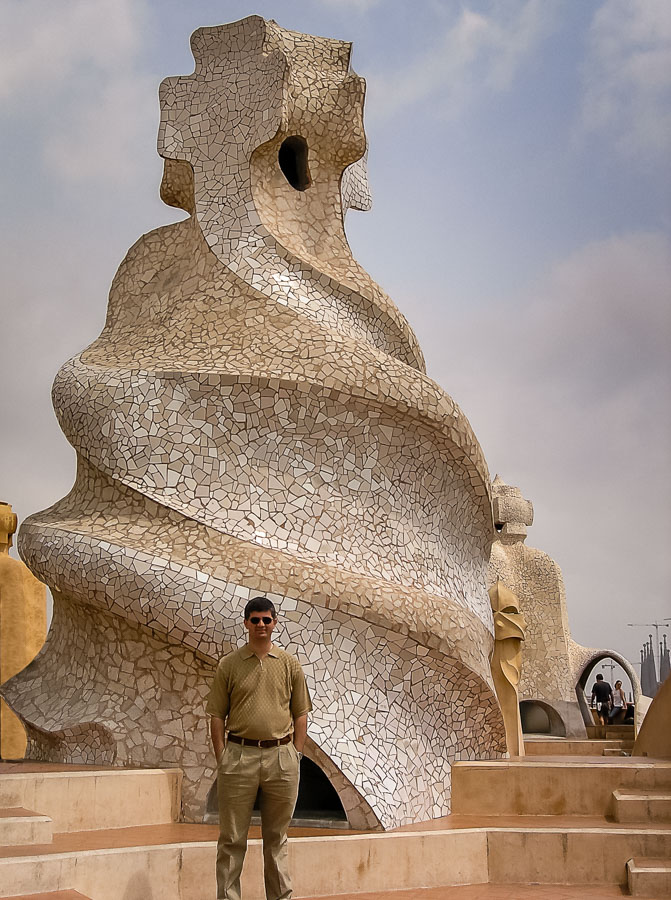 One other Gaudí masterpiece, Casa Batlló, neighbors three other Modernist buildings by different architects. They are all so unlike each other that the block on which they are located has a semi-official designation of “the Island of Discord”. Because Gaudí is the most recognized of the names, Casa Batlló is the most visited of the properties on the block. I cannot vouch for others, but it is certainly worth the visit. 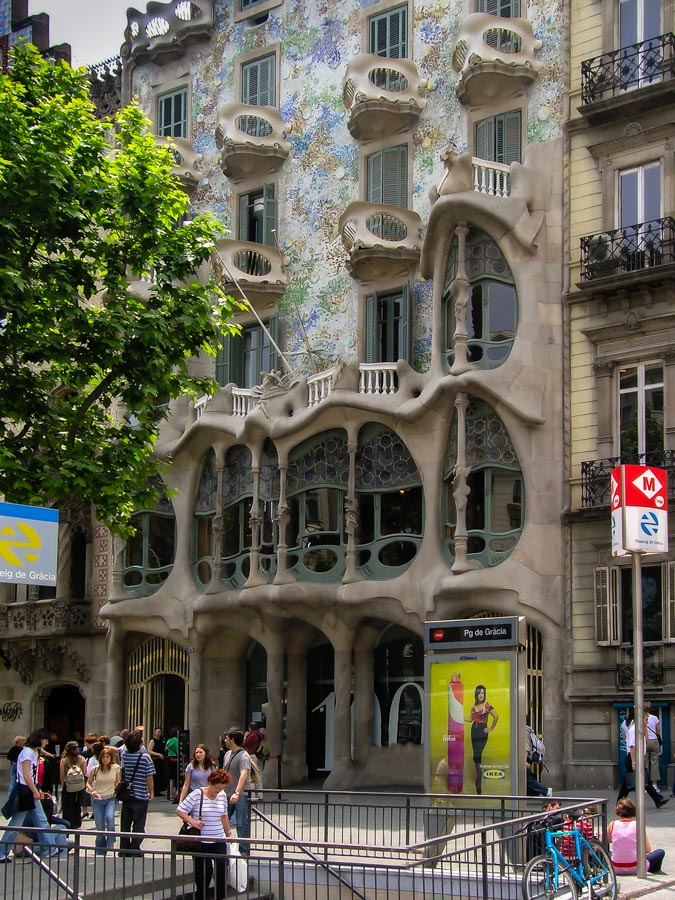 Parque Güell, which I do not have good pictures of, is slightly further afield, reached by subway and not very long uphill walk. It is certainly a contender for a place in the top five sights in Barcelona, so don’t let the required extra effort keep you from going there.

We have once done all of these four sights in one day, with plenty of leisurely walks in between, but it was in the “shoulder season” – ticket lines were reasonable. Those lines at busy times can readily take over an hour each, so buy tickets in advance whenever possible (we still spent an hour and a half in line to get up the Sagrada Familia towers on that same day, but that part of the attraction may be run more efficiently now that the interior construction is over). If I remember correctly, Palacio Güell requires advance ticket purchase at all times. I have serious doubts that any reasonable itinerary (by “reasonable”, I mean no rushing between sights and no hurry during any individual tour) can fit all these properties into a single day even in the relative off-season. But Barcelona offers attractions to fill a week and a half, easily. Sparing a couple of those days on Gaudí is a fairly obvious choice to me.