In what feels like ages ago but is merely a matter of less than two decades, we were recent American immigrants still awaiting naturalization and possessing decidedly limited financial means. In those prehistoric times, our travel journeys were few and far in between and normally limited to north-American locations where we had residing relatives.

Puerto Rico offered us one of the few opportunities to travel abroad with little hassle and manageable expense. We took advantage of that twice in quick succession, first on a week-long vacation and then on a long-weekend romantic getaway. On the first of the two visits, we explored quite a number of places, including El Yunque tropical forest and Liquillo beach. And, of course, we spent considerable time in San Juan getting to know its historic core.

The World Heritage site, therefore, bears the distinction of being the first one visited by us outside of the confines of the former Soviet Union. The inscription cites the military and architectural value of San Juan’s fortifications in the history of America colonisation. I was not such an architecture aficionado in my twenties as I am today, so I have to confess in not truly having had been impressed by the old forts. Old San Juan, however, was truly a delight as our very first look at the city not at all like American Northeast cities and towns or anything that we could have seen in our youth in the country of our births.

Reviewing our old photo-albums, I realize that we shot at least two rolls of film on that first visit to Puerto Rico, but very little of it is salvageable for posting purposes. We brought home a pretty good collection of postcards with the highlights of our sightseeing itinerary and a few dozen beach/vacationing snapshots. This picture of a monument somewhere on the approach to El Morro is the result of extensive processing and styling to become passable enough to offer to this demanding audience. 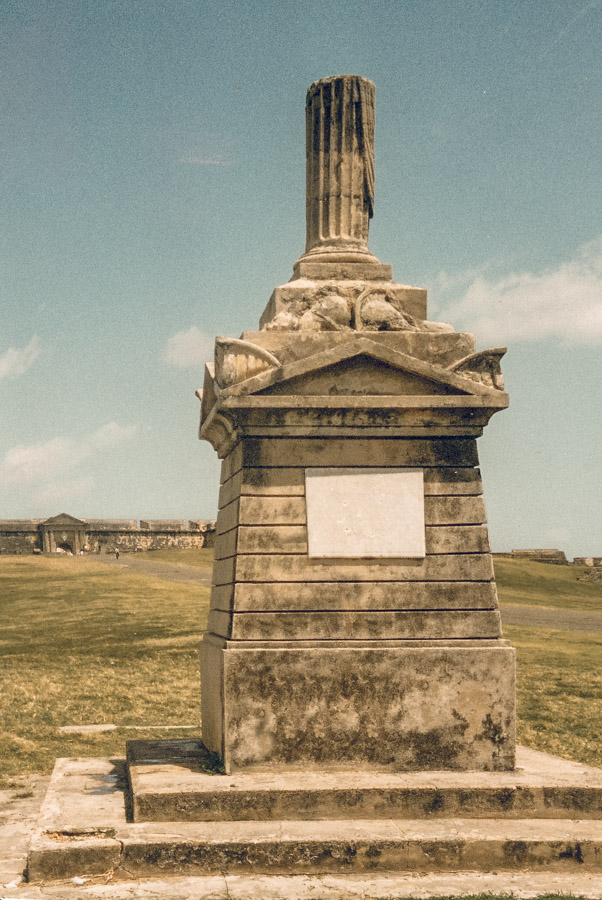 I am guessing that you need at least two full days to properly explore the forts and the Old San Juan. I promise to set aside at least as much the next time I come to Puerto Rico.