We did not set aside significant time to get ourselves acquainted with the Republic of San Marino. With all due respect to the oldest continuous constitutional republic in the world, it can hardly contend for anything but a mere curiosity status on any tour itinerary.

Unless you are a Russian tourist spending a vacation on the coast around Rimini. In which case you will certainly include a shopping day in San Marino as part of your program. I would not be surprised to find that Russian shoppers are responsible for most of San Marino’s GDP. Everywhere in the historic town center you hear Russian language and see Russian signs in shops and restaurants.

But wait! San Marino is a UNESCO World Heritage site, recognized for the longevity and continuity of the historic core of the tiny free republic. For reasons that defy explanation, it took me significant time past our visit to catch on to the fact that I had added another site to my visited collection. Neither during planning nor during the visit itself did we become aware of that.

One of the reasons could be that the main pedestrian streets are awfully commercialized and that the town, despite the long history of the republic, feels somewhat artificially medieval-cute. But cute nonetheless. And there are a few points of interest – and even a combined access ticket for five sights. We only decided to take a look at one, the Guaita Tower, a smallish fortification with centuries of history. It turned out to be quite an informative visit, enabled both by stands depicting important historical events and by attendants in traditional garb providing commentary on various crafts and endeavors.

Here is the tower’s inner yard. 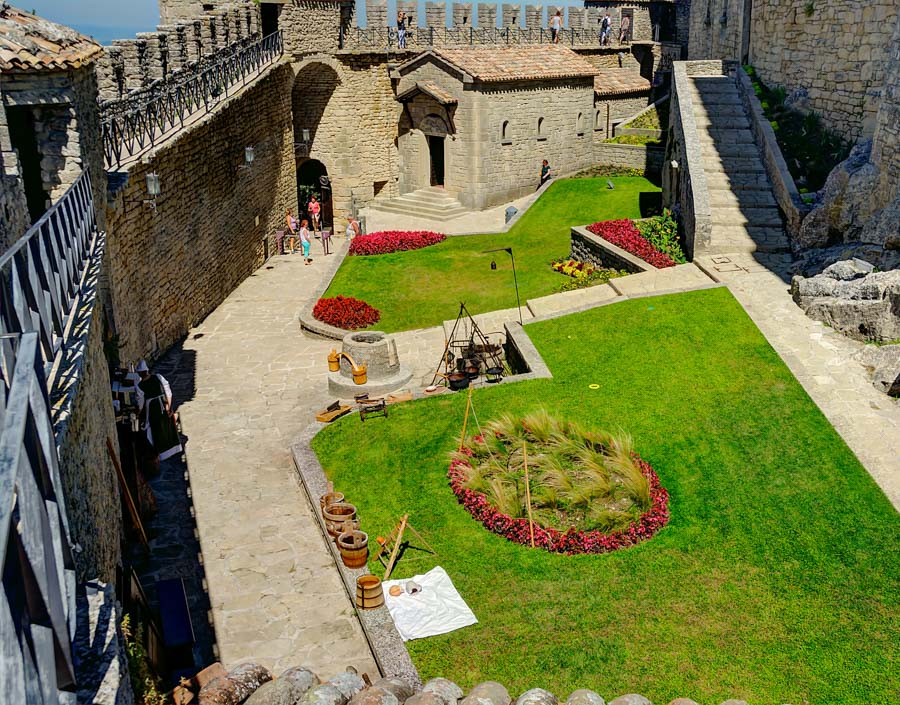 And this is the roughly opposite perspective, taking in the distant mountains and another nearby fortification, the Cesta Tower. 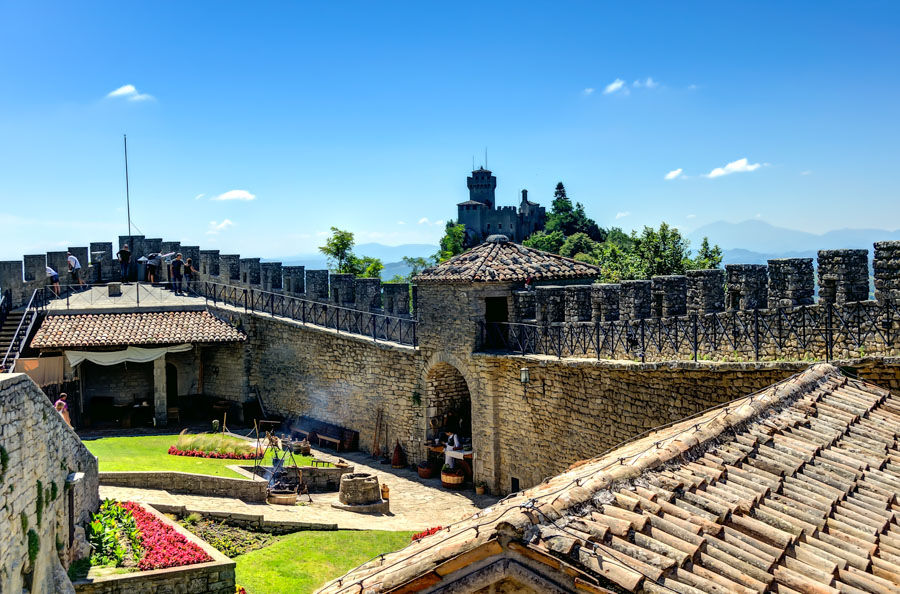 Then, there are views. San Marino Città is located on top of a mountain that soars over surrounding countryside. There are several vantage points from the tower’s ramparts to see the lands of San Marino and, of course, those belonging to Italy all the way to Adriatic Sea. 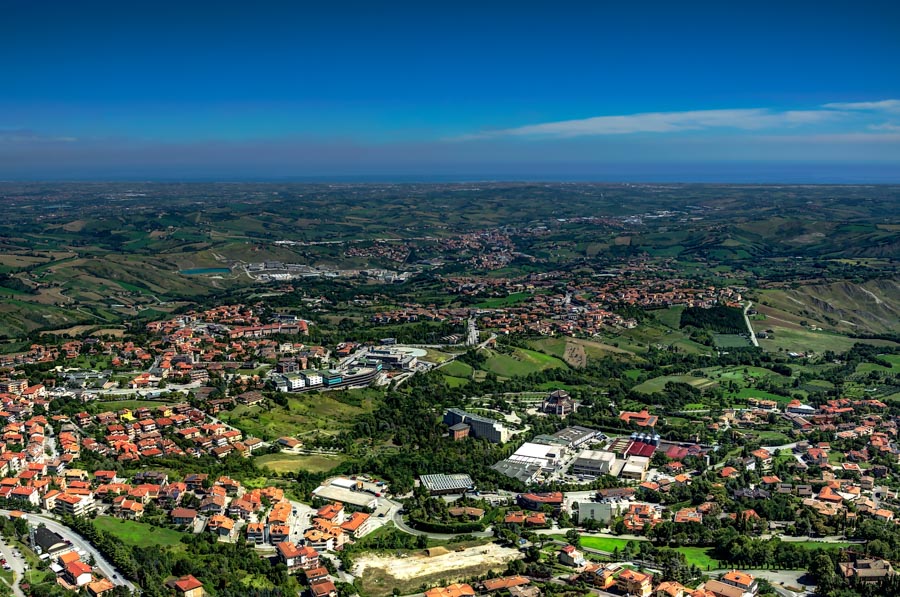 The next shot is of the main square, Piazza della Libertà, with San Marino’s own Statue of Liberty and the government headquarters, Palazzo Pubblico, in the background. 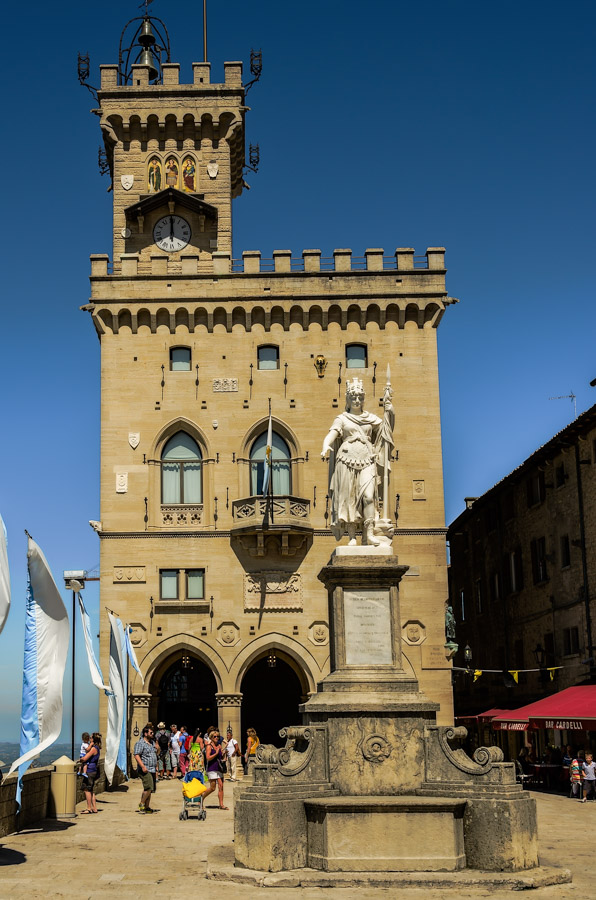 And this is Basilica di San Marino. 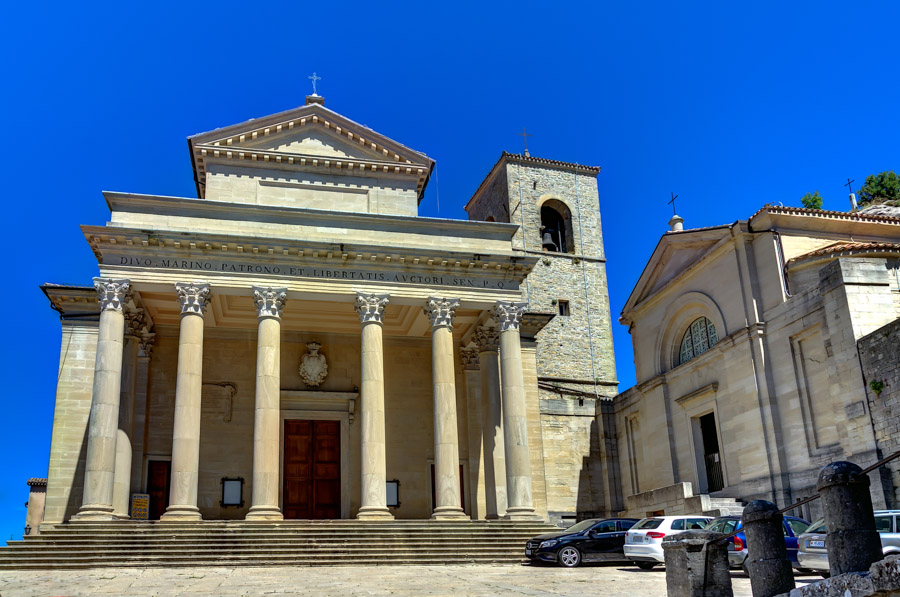 The interior of the church did not impress us much. I expected something more exceptional from the basilica devoted to the person who gave the country its name after having founded the first monastic settlement here all the way back in the 4th century A.D.

If you are not after shopping, a couple of hours is more than enough to get a proper impression of San Marino. Visiting the Palazzo and other sights and possibly taking a meal on a terrace with gorgeous views might help you stretch your time to half a day.

These and other pictures of San Marino can be found in my Flickr photostream.