The incredibly picturesque area of Cinque Terre, along with Portovenere and a trio of islands to the immediate south, are inscribed on the UNESCO World Heritage list for their historic and cultural value, to say nothing of their beauty. For nearly a millennium, the rugged and mountainous Ligurian coast made these villages remote and isolated, accessible only via water. In the 21st century, the cars and the trains can reach every village but in such a limited fashion as to allow them to retain their unique charming features.

Our base in Cinque Terre was Vernazza, which provides the best balance of accessibility, size, and charm. The following shot is one of the iconic images of the region. 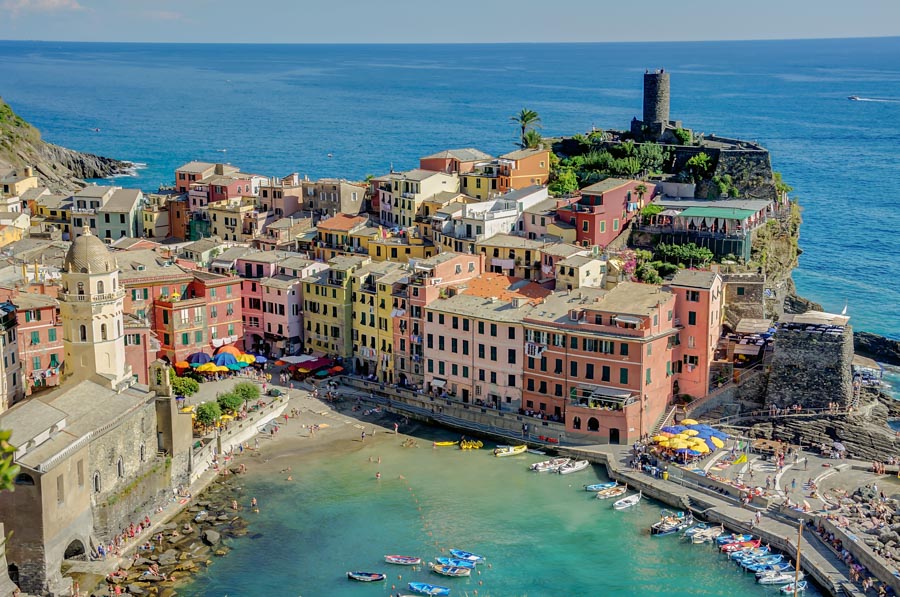 This view opens from a lookout at the beginning (or the end, depending on your direction) of the trail to Monterosso. The trails are not easy for those less athletically-inclined, but a fantastic way to get a better impression of the entire region. The main trail connects all five seaside villages; the shortest leg, the southernmost connection between Manarola and Riomaggiore, is considered the most romantic – and easiest – and has a somewhat pretentious name of “Lovers’ Alley”. We initially planned to walk the entire route, but a couple of sections, including the aforementioned Lovers’ Alley, were closed due to hurricane damage, so we only walked the section between Vernazza and Corniglia, and later between Monterosso and Vernazza. Each of those two requires at least 90 minutes to navigate. The northernmost leg, from Monterosso to Vernazza, is more beautiful, with several waterfalls and streams to break the mountanous landscape.

If you find the white awning on the ground level of the pale pink building in the center of the above shot, the window immediately to the right of it is that of our rental apartment.

Although some people sunbathe and swim at the marina or off the pier that extends to the right of the shot, Vernazza also has a wild rocky beach that is located behind the buildings on the left of the picture. We took a few dips in the Ligurian Sea over there.

Corniglia is the only one of the five villages that does not have direct access to the sea. It sits high atop a small but steep promontory. 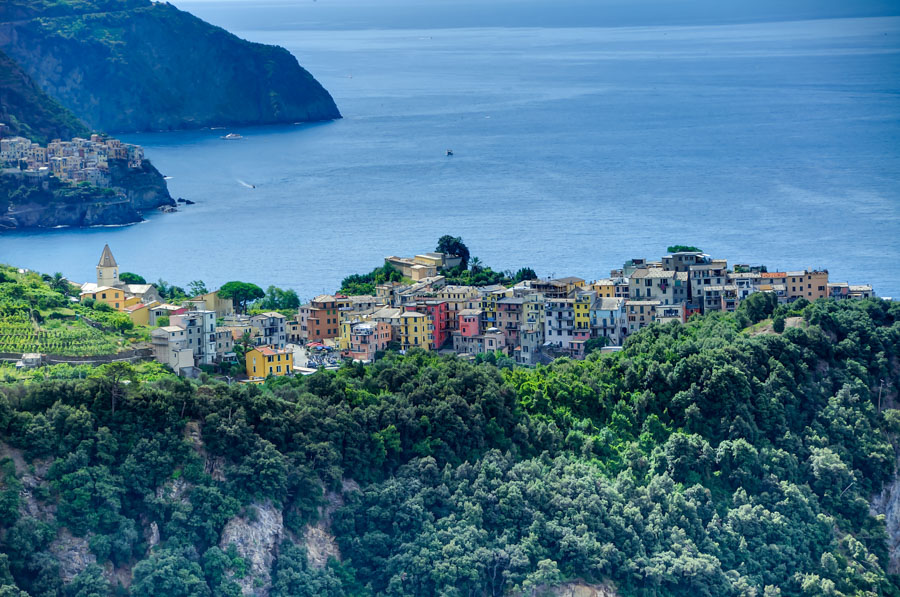 This is quite a disadvantage, IMHO. None of the villages provide significant sightseeing and entertainment opportunities each in itself. You get the most out of the region if you explore all villages. With no ferry stop and a long walk down – and on the way back, up – to the railway station, Corniglia is just not as accessible as other places. The beach is located beyond the station – again, a significant descent to get there, and more importantly, a significant climb on the return trip.

You see a glimpse of Manarola, the next village southward on the previous shot. Here it is up close. 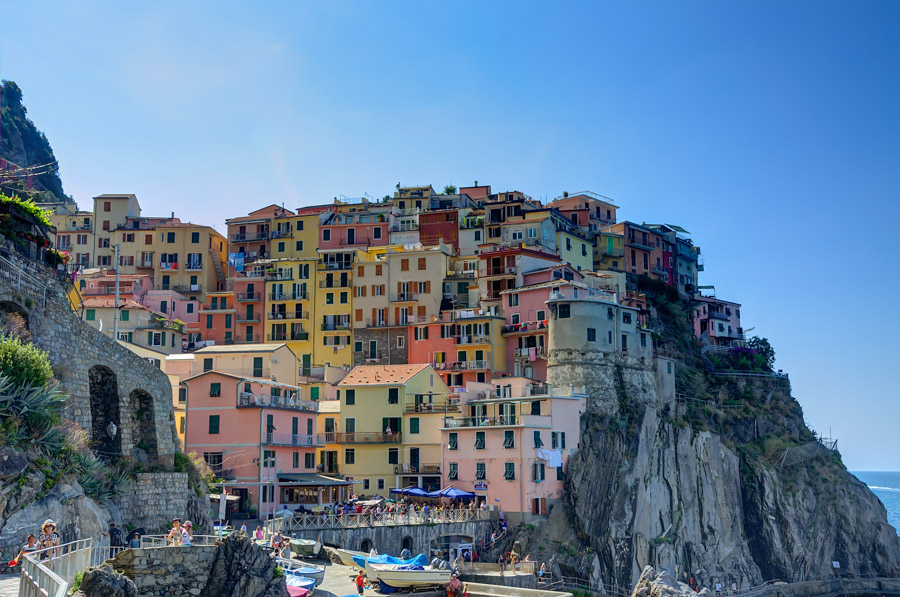 Manarola is the smallest of the five hamlets. It has tiny access to the sea, with a small rocky lagoon doubling as a beach and a small piazza providing a couple of waterfront dining options.

Riomaggiore, the southernmost village, is similar to Manarola but slightly larger in size. 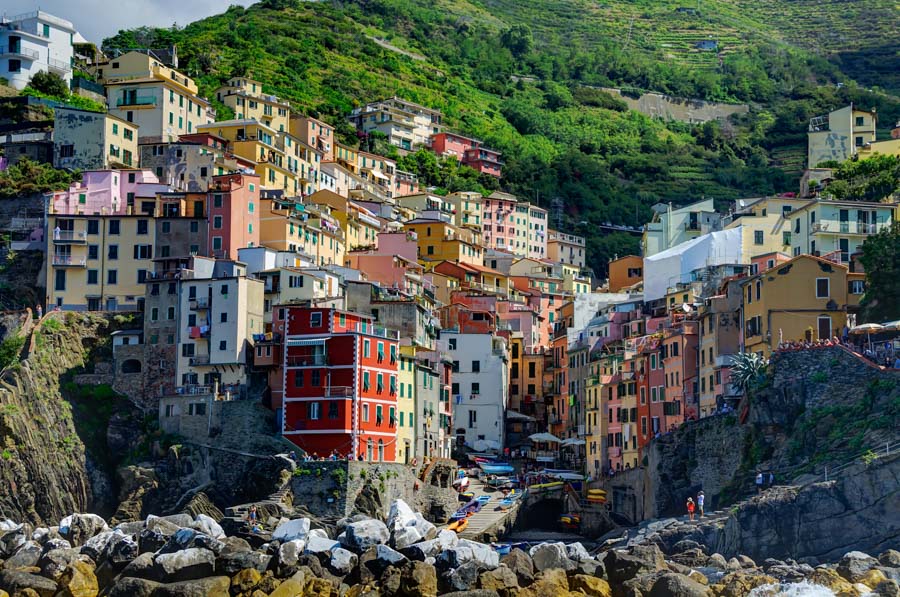 Its seafront area is actually even tinier than Manarola’s, but the upper town is bigger, goes farther up the mountain via a comparatively wide main street, and there is a separate part of village which occupies the next adjoining cove on the coast.

The northernmost village, Monterosso al Mare, is the largest of them all. 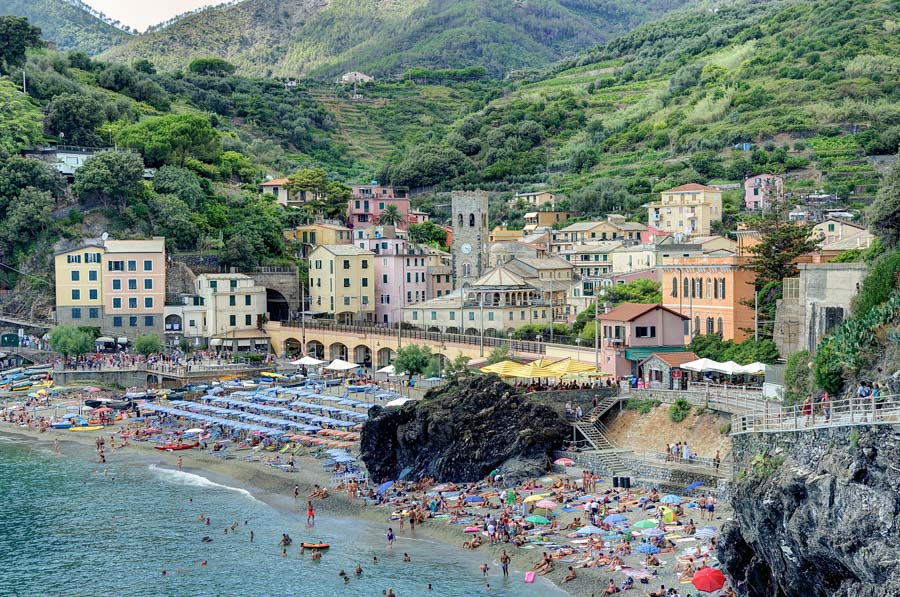 Monterosso, alone on Cinque Terre, has a sizable and developed beach. The picture above shows only the part of it in front of the city center. It continues beyond the promontory on the left for nearly a mile.

Unlike all other villages, there is more than one street in Monterosso that is not effectively a stair climb and there is even a small park with a playground near the waterfront. For those inclined towards a beach-centric resort stay, Monterosso potentially could provide all that is needed by itself.

We also visited Portovenere, which is part of the same World Heritage site, but not part of Cinque Terre proper. 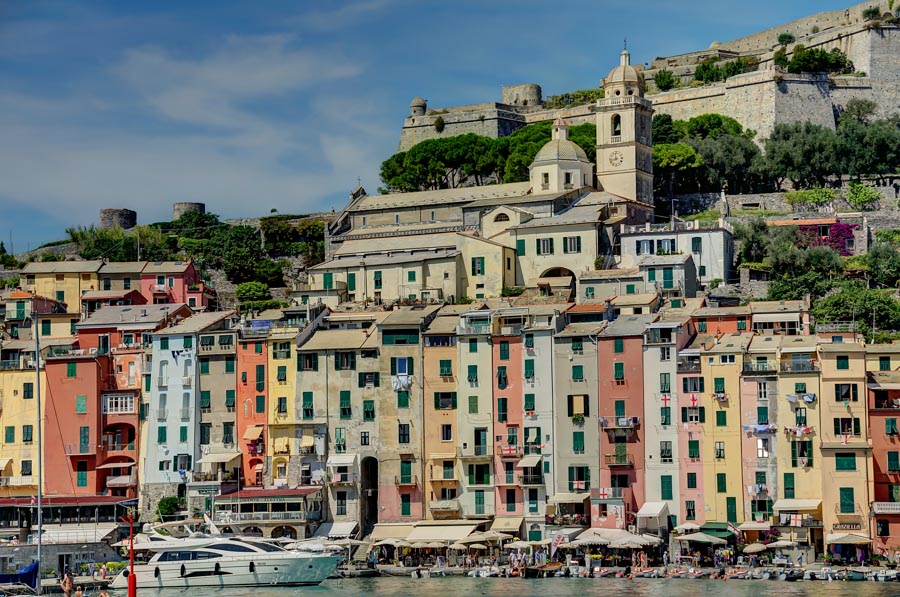 Portovenere is located to the south of Riomaggiore. Hidden behind a jutting promontory, but with an extended waterfront, it feels larger than any of the five villages, even though it may actually be smaller in size than Monterosso. It is certainly very colourful and offers several points of interest, in addition to its quay and its main commercial street. Excluding time for meals and for beach-going, each of the Cinque Terre villages can be covered in depth in under an hour. Portovenere requires at least two or three hours, and that is without much lingering.

The UNESCO site also includes three small islands off Portovenere as part of its body, but we did not fit exploring those into our itinerary.

Cinque Terre is certainly amongst the most eye-catching and remarkable places that we have seen on our travels. Navigating the area may not be the most straightforward of the exercises, but it is awfully rewarding. And often breathtaking.

These and many other pictures of Cinque Terre and Portovenere can be found in my Flickr photostream.