Reims Cathedral is not the only great church that prompted us to plan a stopover in town specifically so that we could visit it. Off the top of my head I can think of at least three others.

Chartres Cathedral was the very first of such churches, chronologically speaking. On our first voyage around France, an intraday stop in Chartres linked the first two legs of the itinerary. Although we did walk around town a little, neither the weather nor the schedule allowed for exploration of much beyond the cathedral.

Inscribed on the UNESCO list as the pinnacle of 12th-13th-century French Gothic art, the cathedral is exactly that, a grand edifice worth effusive accolades. Its stained-glass windows are among the most splendid in the world, especially considering their age and excellent state of preservation.

Unfortunately, in those film-photography times, the limited amout of pictures we took with a point-and-shoot camera tended to emphasize “we’ve been here” concept, with either Natasha or me featuring in front of various points of interest. The best I can offer from my archives is this view from town streets below the cathedral. At least you can enjoy the visage of me, 12 years younger. 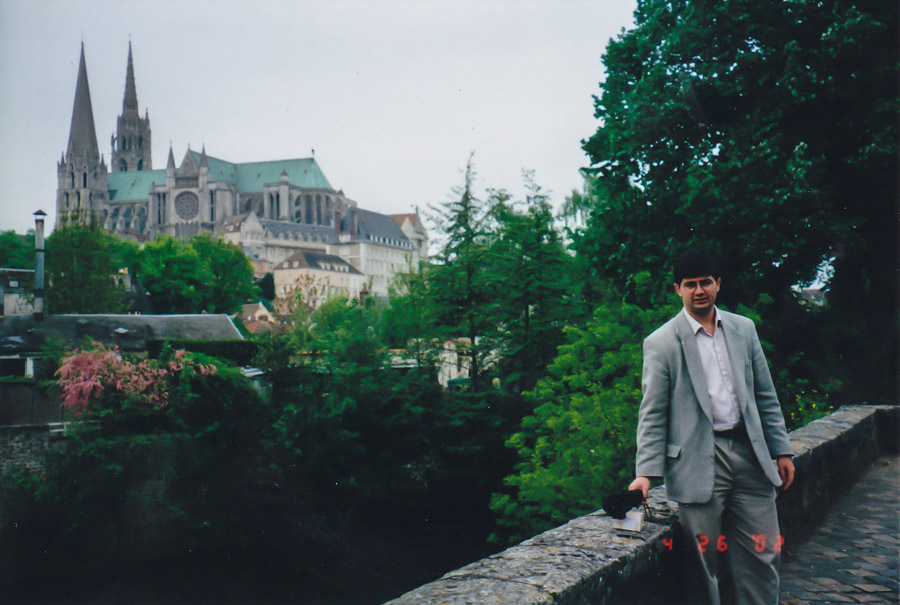 Aside from the façon of eyeglasses, I actually did not change that much, I don’t think. I even wear this same blazer on occasion.