My favorite sights of Rome

Some people come to Rome for its millenia of history. Others may be attracted by the treasures found in the Vatican Museum as well as a number of lesser known galleries. Yet others explore architectural beauty of its many churches and palaces.

Me, I come to Rome for its squares.

We’ll start with a night-time view of Piazza Navona. 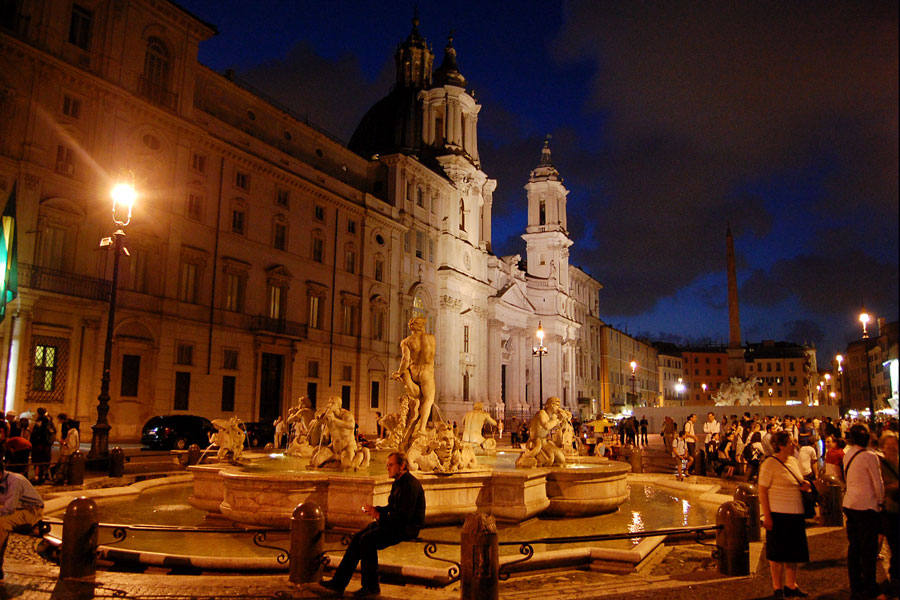 The large rectangular square, which follows the shape of a 1st-century stadium, has not one or two, but three elaborate fountains. It is not exactly my favorite Roman square, but it is certainly one of the most photogenic. So here is another shot of it, surprisingly not looking too busy in the middle of the day. 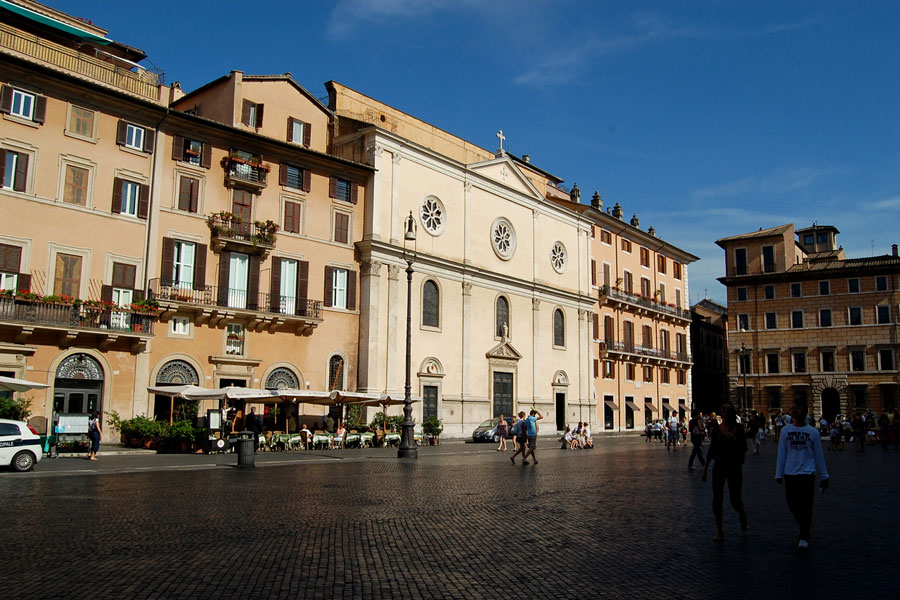 And, of course, spires piercing the skies. The obelisk crowns the main fountain on the piazza, called the Four Rivers Fountain, and the church is Sant’Agnese in Agone. 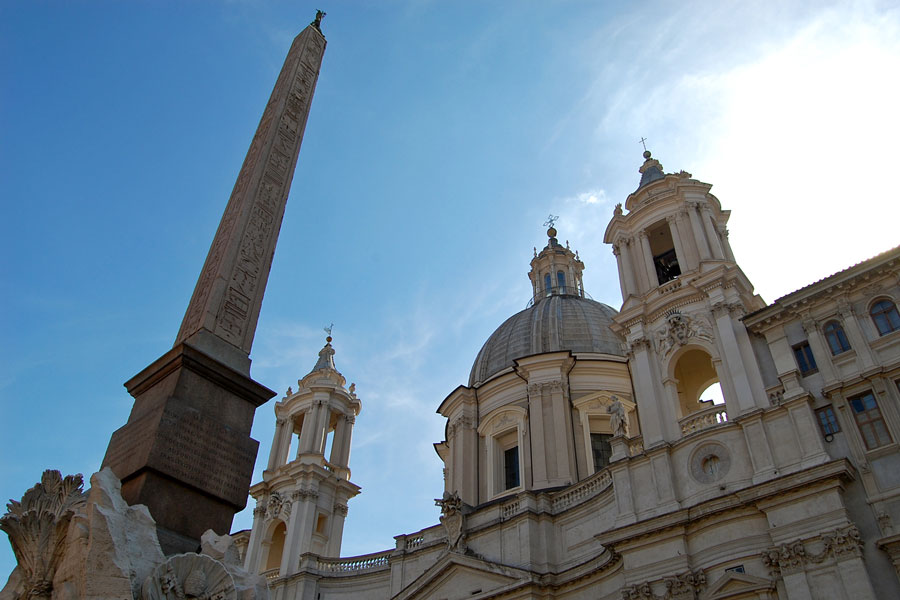 A different kind of square is Piazza del Popolo. Besides being round as opposed to rectangular, it is much more open. The huge obelisk at its center is surrounded by four small fountains. This is the view onto the square from a viewpoint on Monte Pincio. 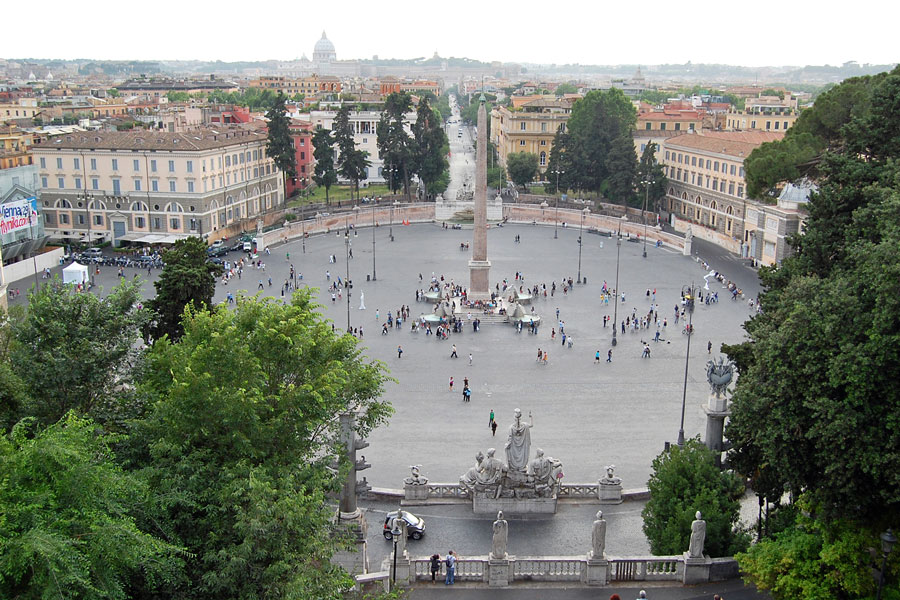 In the distance, you can see the dome of the St Peter’s cathedral. We’ll see it again from other perspectives.

One of the busiest but nonetheless one of my favorite squares is Piazza della Rotonda, 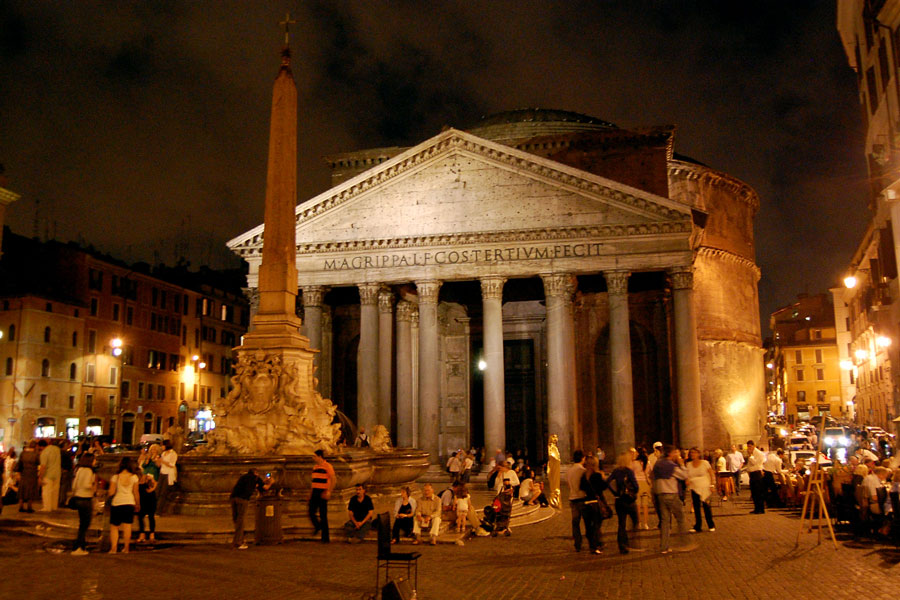 where the requisite obelisk with a fountain is facing Pantheon, a uniquely well-preserved structure built nearly two thousand years ago.

Whereas most of the architecture from the Ancient Roman times reached us mostly as ruins (whether in the Coliseum or at the Forum, you really have to give your imagination a workout to be able to appreciate what the structures looked like in their heyday), Pantheon stands more or less in the same shape as it was designed in 118 AD. It had its re-incarnations as a church and, at present, a historical monument, but it has not been rebuilt since then. 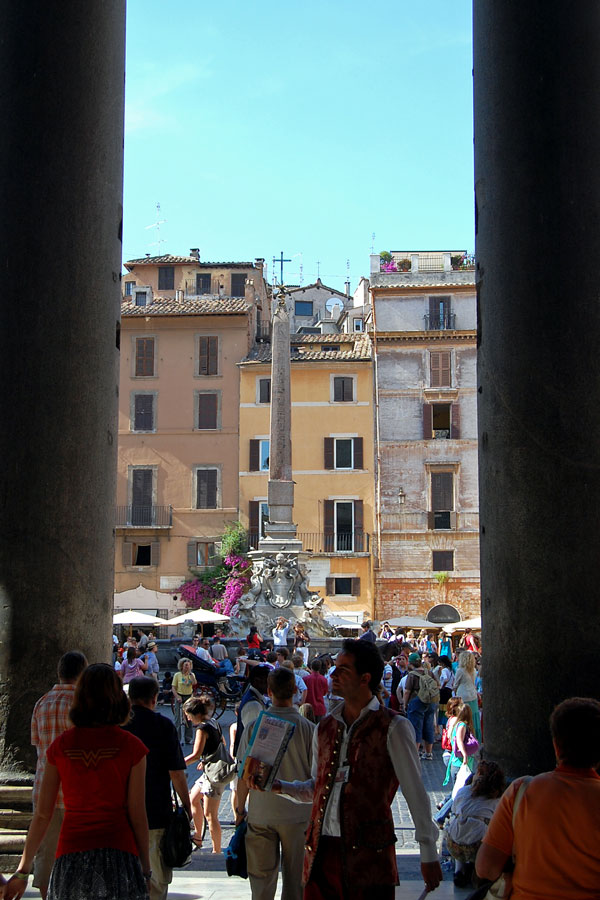 Leaving aside the obvious attraction of the Pantheon as a major point of interest, here is a quirky chance experience that you might have there. If you ever find yourselves around Pantheon during rain, observing falling raindrops inside the building is simply fascinating. The roof of the structure has a large circular opening that is the only source of light in the building, but in addition to sunlight the rain gets in as well. The floor directly underneath the opening is laid with an almost unnoticeable incline, so that the water flows towards the drains rather than accumulates in puddles. When it does rain, the raindrops fall to the floor as though in an aerodynamically-created cylindric tunnel – and you can practically follow the descent of distinct drops even during heavy rain.

The shot at the left is the view towards the center of Piazza della Rotonda from the entrance to the Pantheon. Just an illustration of how busy the place looks on a sunny day.

For some reason, I do not have a good shot of the magnificent Piazza San Pietro to include here. It’s a real shame because the square is as regal as anything you can imagine, an instant “wow”-inducer. Nonetheless, the eponymous Basilica, the most-sacred Catholic shrine in the world, features on many of our photographs, towering in the background. Below is a relative close-up, taken from the roof of Castel Sant’Angelo. 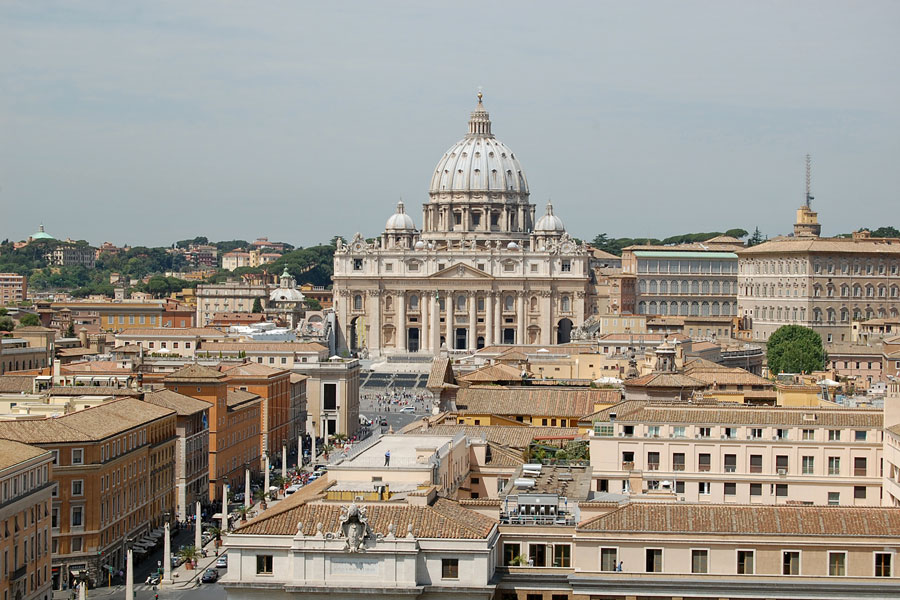 From the same vantage point, you can take in this amazing view over the city and towards the mountains. 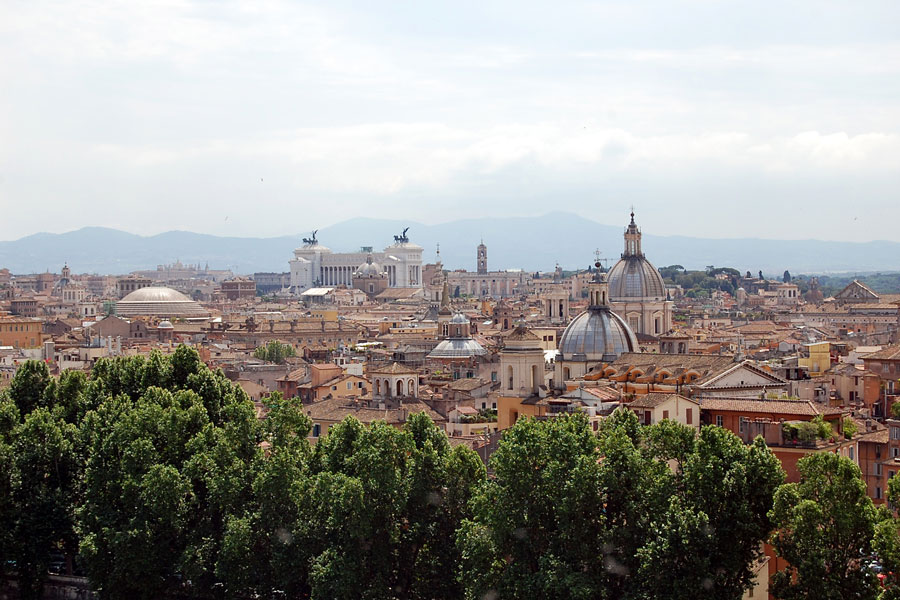 The conical roof near the left edge of the picture is the Pantheon. The white palace with identical statues capping its wings is the monument to the first king of the unified Italy, Vittorio Emanuele II 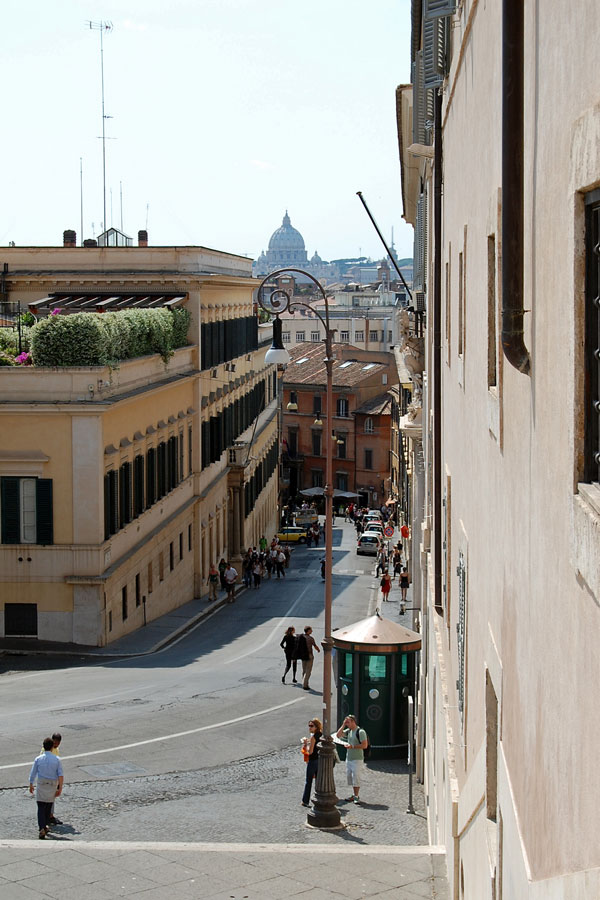 (the exuberant building which looks out to Piazza di Venezia is colloquially known to locals as “the typewriter” or “the wedding cake”). If you have really good eyes, you can spot the top tier of the Coliseum peeking at you immediately to the left of the wedding cake. And slightly to the right of the monument, the lone tower marks Palazzo Senatorio at the top of the Capitoline Hill. 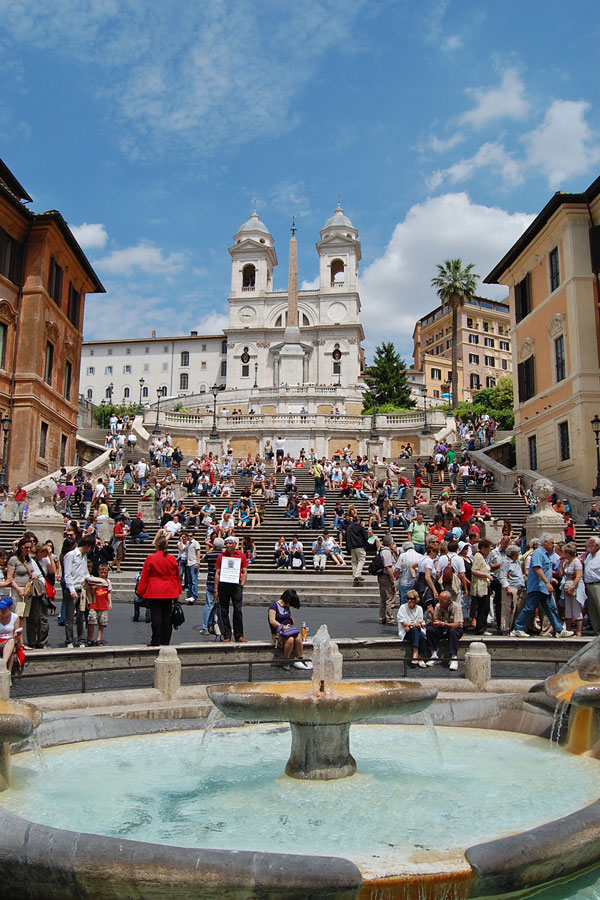 Plus the numerous church domes, of course.

Rome was famously built on seven hills, which becomes obvious in certain spots. For instance, the view on the left is the perspective towards St Peter’s from a corner of Piazza de Quirinale that marks the top of the Quirinale Hill. From here, it looks like we are level with the cathedral’s dome, just as we were when we looked onto Piazza del Popolo.

The shot on the right is a perspective that goes up, not down, taken from the bottom of the Spanish Steps on Piazza di Spagna. This is normally one of the most crowded pedestrian areas in all of Rome, so I count myself lucky to have been able to catch it at a comparatively quiet moment. 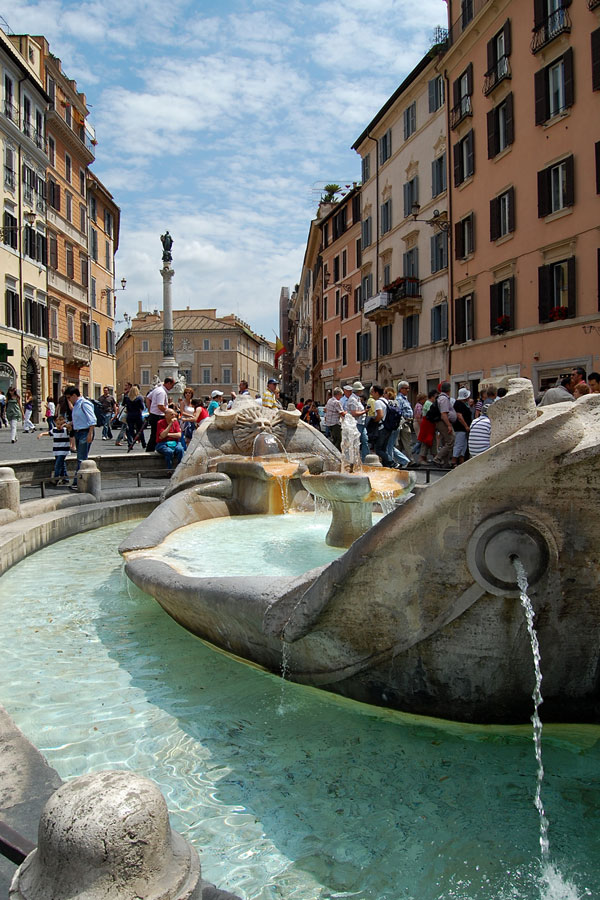 The church of Trinità dei Monti at the top of the steps may not be a point of interest by itself, but it holds its place at the summit gloriously.

To the left is the view exactly perpendicular to the one before, showing the small but unusual fountain at the bottom of the Spanish Steps and the perspective towards another one of the dozens of columns and obelisks found on Roman piazzas.

There are plenty more enticing squares and fountains in the center of Rome that I could include here: the traffic-burdened Piazza Barberini with understated but sublime Triton Fountain; the not-exactly-square intersection of Via di Quattro Fontane and Via XX Settembre with a fountain signifying one of the four seasons built into each corner building; the noisy Piazza Campo dei Fiori, where a monument to Giordano Bruno is surrounded by a lively market; the grand Piazza di Venezia, dominated by the aforementioned “typewriter”, which has a couple of fountains of its own; and so on. But that would stretch the limits I set for myself in this series.

So, I’ll close this photo-essay with the shot of probably the most famous – and definitely our personal favorite – fountain in Rome: Fontana di Trevi. 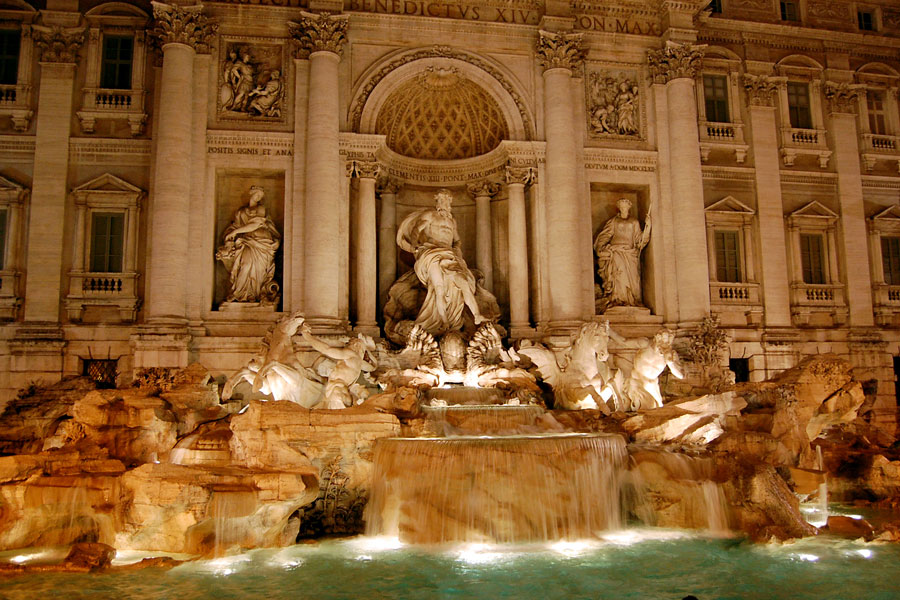 Beautiful. As is the Eternal City itself.