My favorite sights of Paris

OK, let’s next pick a city that would present me with a welcome problem similar to what I had with Florence or London – plenty of photographs to choose from.

We’ve been to Paris many times, and repeatedly professed our love for the city on the pages of this blog (most recently as part of a movie review). In our time there, we took tons of pictures and plenty of videos (even producing a Paris-centric music video). Vast majority of those are of instantly recognizable sights and edifices, so I’ll stay mostly on the touristy side with this Parisian essay.

We’ll start with that obvious symbol of the French capital, the Eiffel Tower. Say what you want about its aesthetic impact on the city, but it is a tremendous feat of engineering prowess. I have to admit, though, that when Parisians complain about the tower being visible from practically everywhere in the city, they have a point. One of my favorite perspectives of it is from the edge of the Place de la Concorde, where it fits in together with various monuments and pillars. 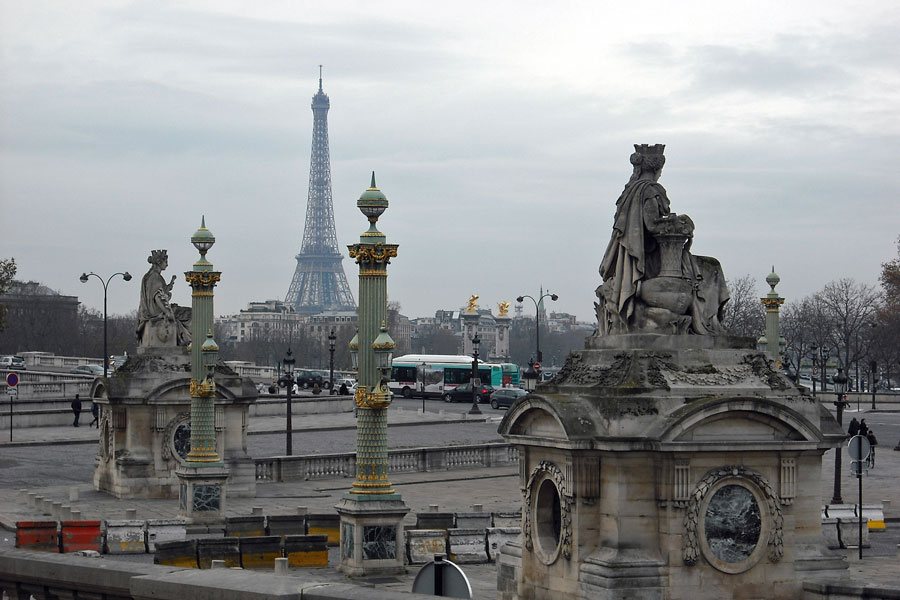 In the center of the shot above, but way in the background, you can see the two columns that happen to adorn the most opulent of the bridges over Seine. Here is a closer look. 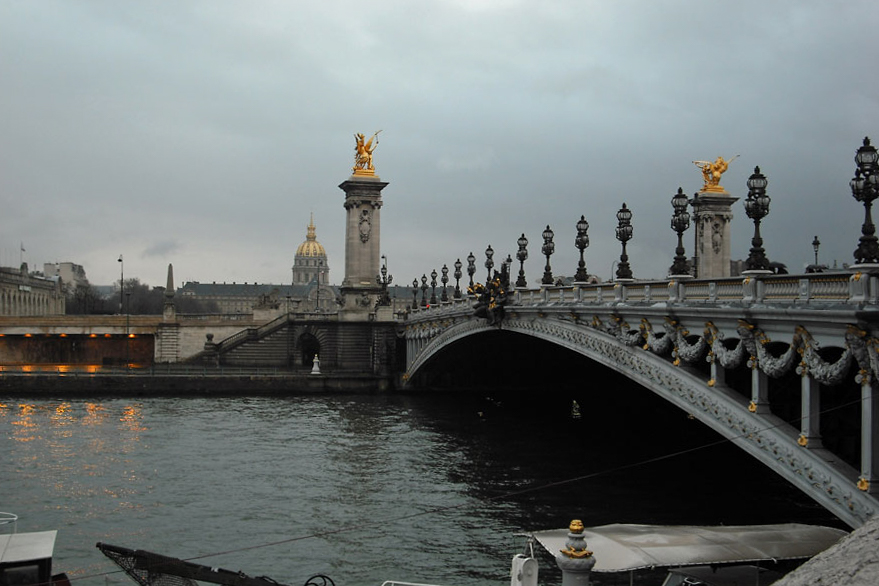 This is Pont Alexandre III, named after the father of the last Romanov, built at the end of the XIX century. Another engineering marvel of the times, and gorgeous too. In the background there is the dome of the St Louis Cathedral, which headlines the Invalides complex.

The next shot is one of my favorite perspectives in all of Europe. The famous Champs Elysées runs in a straight line from Arc de Triomphe to Place de la Concord, where the 3400-year-old Luxor obelisk marks the square center, and then is sort of continued by the wide main alley of the Jardin de Tuileries, which runs all the way to Arc de Triomphe du Carrousel in front of the Louvre. With a better equipment, one can take in the entire length of the way from Louvre to Arc de Triomphe in one shot – about two miles of distance. With my tourist-grade SLR, a pretty good view from the Tuileries pond is still possible. 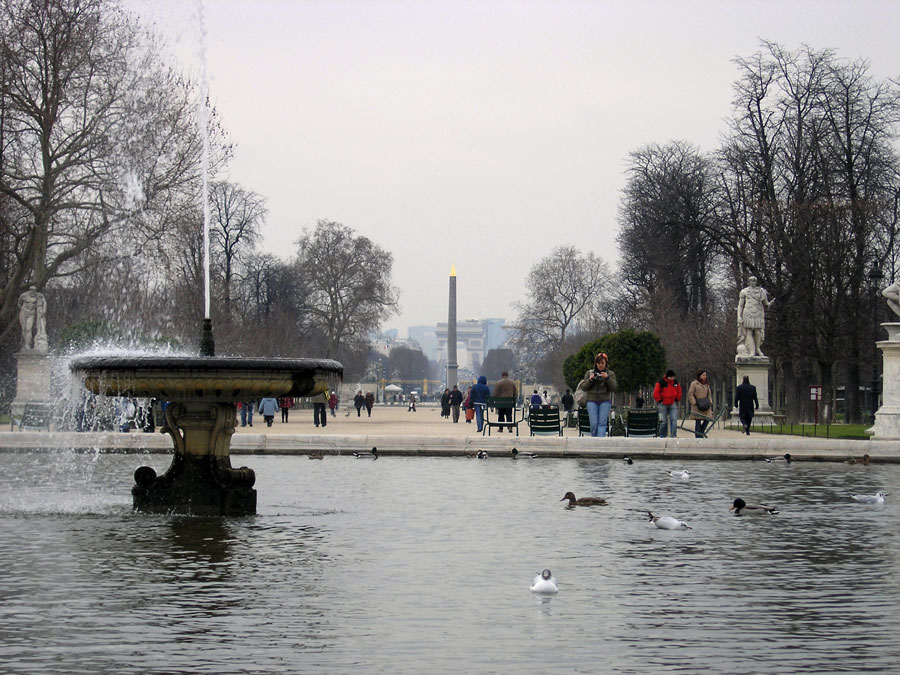 You can even see the silhouettes of the buildings in the financial district of La Défense, another couple of miles beyond the Arc de Triomphe.

Notre Dame de Paris hardly requires introduction, being another of the iconic Parisian sights. For an interior view of a place of worship, nothing beats nearby Ste-Chapelle, but the exterior shots of Notre Dame are simply majestic, especially in night-time lighting. 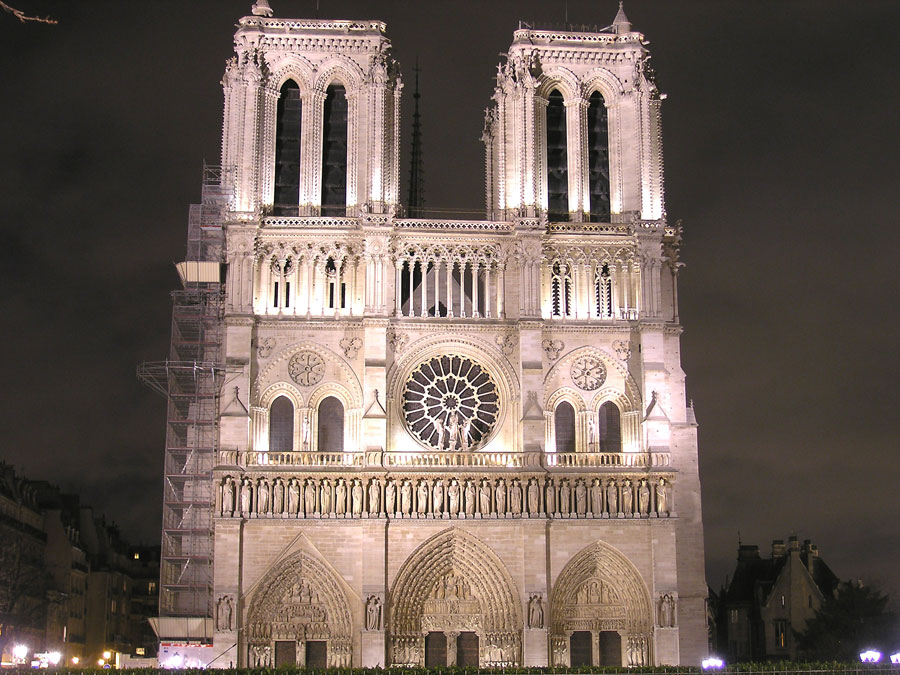 I am a big fan of the following view of the edge of Île de la Cité, with Seine prominently in the foreground and Notre Dame’s spire piercing the sky in the background. 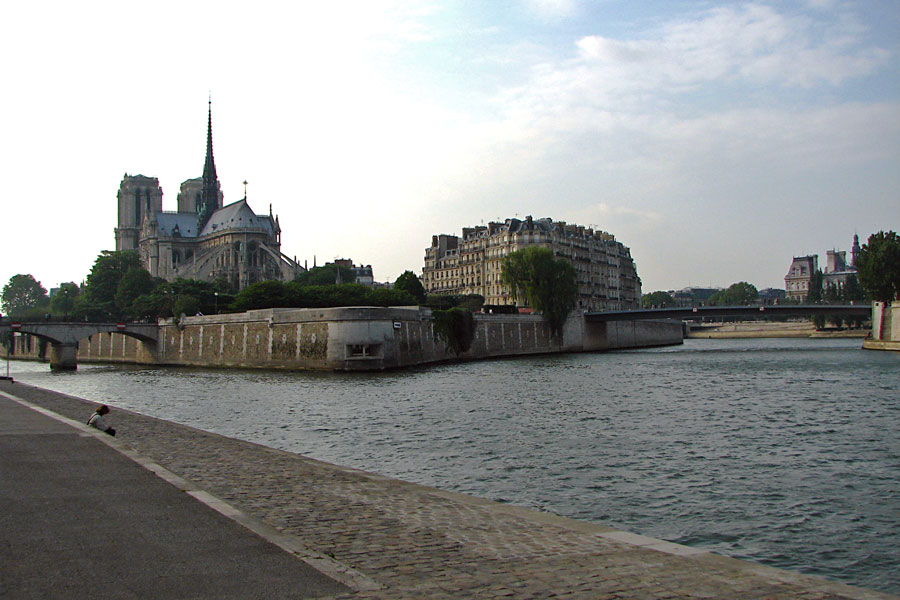 There is a shot in Midnight in Paris with Owen Wilson walking along practically the same stretch of the riverbank. 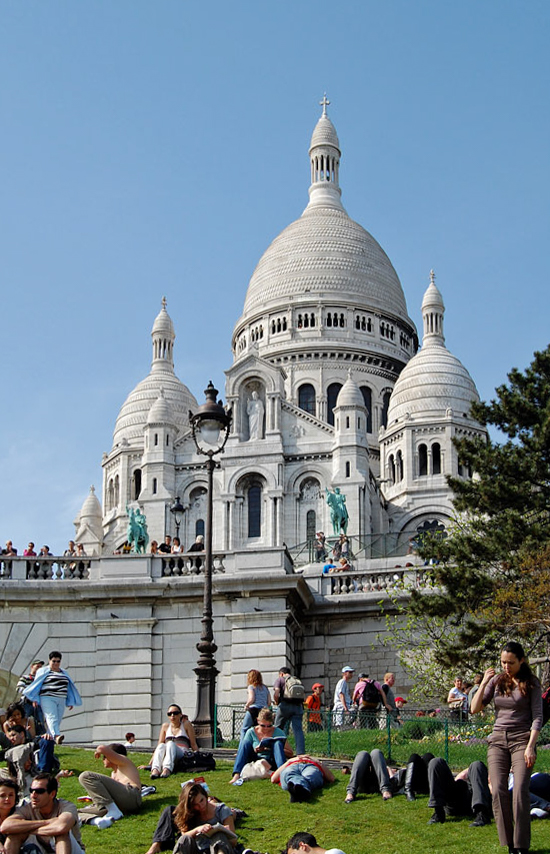 Another instantly recognizable church in Paris is Sacré-Coeur Basilica at the top of the Montmartre hill.

Montmartre arouses mixed feelings in visitors. It is fun and vibrant, and climbing the staircases towards the Basilica is among my best-loved things to do in Paris, but it can also be oppressive and stifling with the number of tourists and those locals who aim to take advantage of visitors. For instance, you always stand a fair chance of being accosted by walk-about artists who offer to draw your portrait right there in the street – I suggest you firmly refuse and continue on your way; 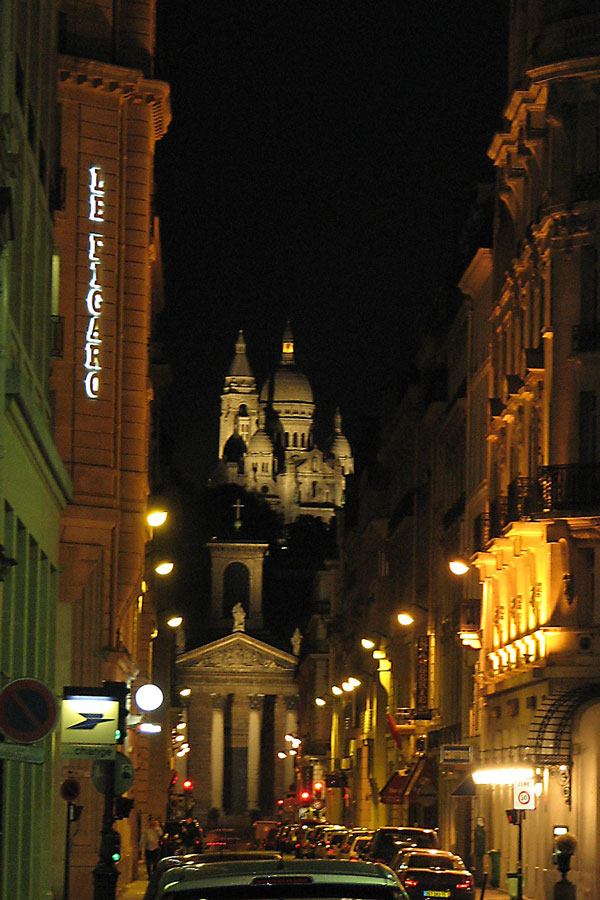 the fact that they roam the streets as opposed to having a stationary location on Place du Tertre does not speak in favor of their abilities, and once you agree to pose you’d find it hard to avoid paying them for their middling efforts afterwards.

On the other hand, the blocks surrounding the Basilica and the nearby Place du Tertre are famously quaint and tranquil. You will need to descend some distance to get back to vibrancy and noise.

On the right, there is a very different view of Sacré-Coeur, after the fall of darkness through the streets from the center of the city. It looks surprisingly close from here, being still more than a mile away.

Something more amusing than the standard tourist fare? No problem! Since we are very partial to French bread and pastry, we tend to look out for boulangeries and patisseries on our walks around town. I definitely count the signs announcing this specific variety of stores among my most favorite sights in Paris. But one day, we came up to a store that clearly had an identity problem. 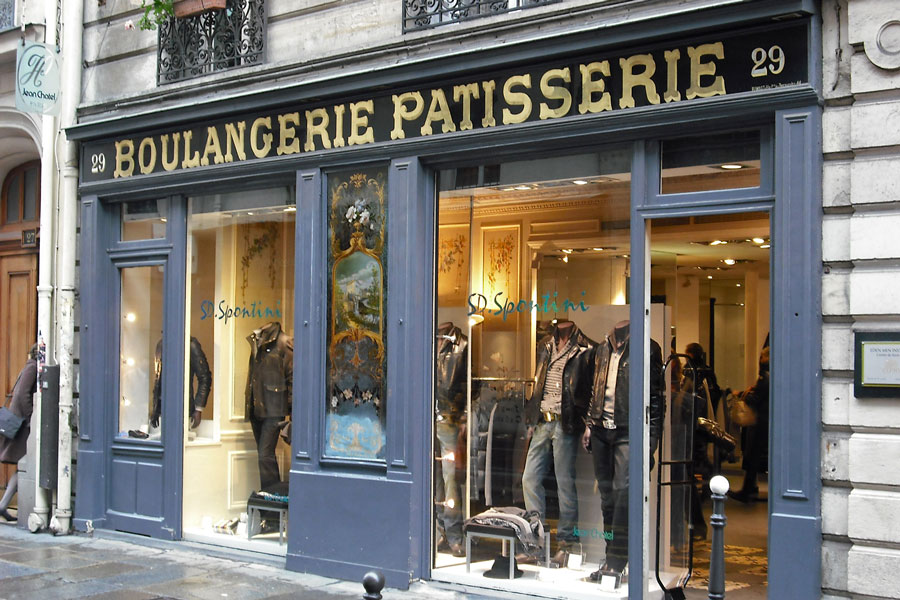 Either that or I am way out of the loop on the modern clothing brands.

There is something distinctly Parisian in a simple shot of buildings alongside the Quai des Célestins as seen from Pont de Sully. After all, central Paris is all built at nearly uniform height with nary an exuberant exterior decoration in sight. 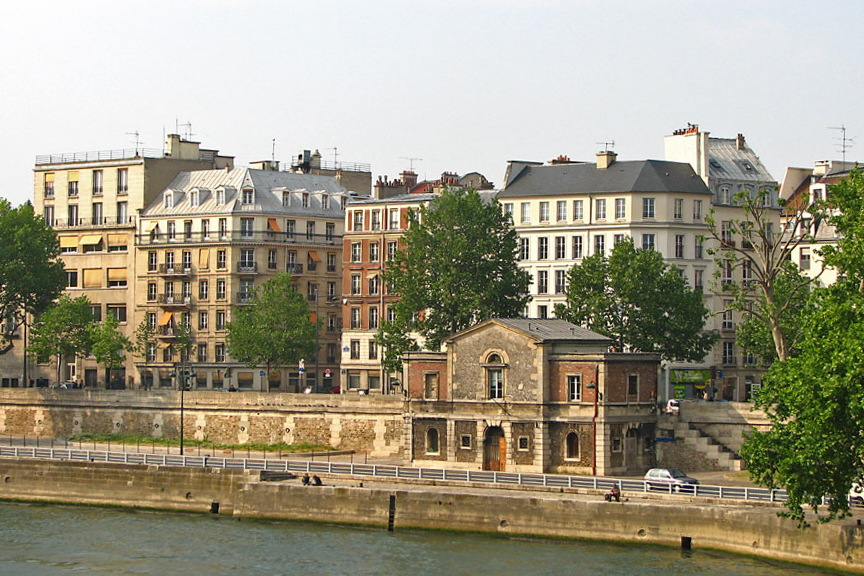 I’ll be the first to admit that Parisian architecture in its mass does not qualify as beautiful, but I find it always comforting and never detracting from the overall romantic feel of the city.

Back to famous attractions. Versailles, well outside of the city boundaries but nearly a must for at least a half-day trip for an infrequent visitor to Paris, is an especially magnificent sight when fountains are in operation (which, unfortunately, only happens on weekends during summer). 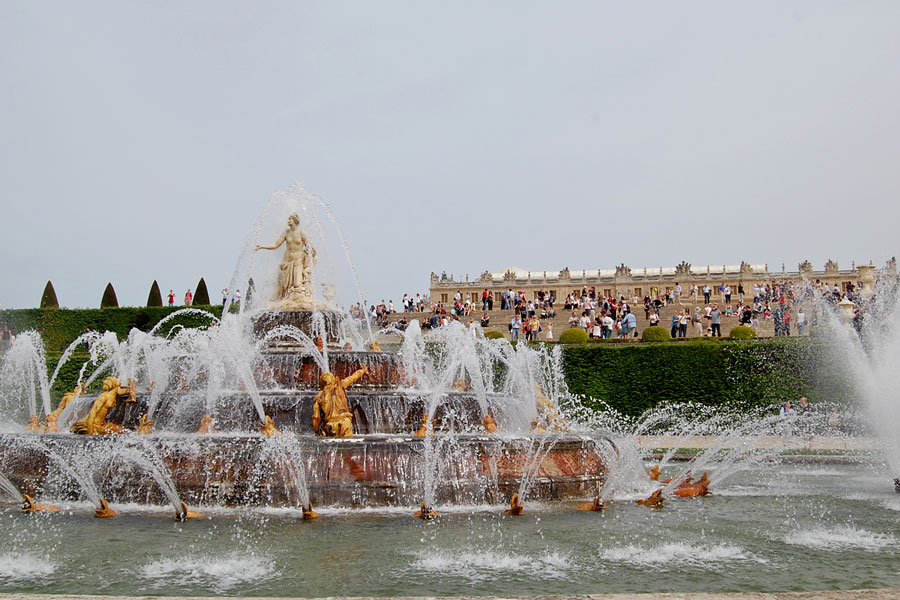 The top level of the palace is barely seen in the background because of the layout of the gardens. If you do not spend too much time admiring the palace until you approach it via the wide staircase that connects the vast lower grounds with the upper gardens, you are in for a major sensory jolt as the monumental façade floats in on you with each ascending step.

The Luxembourg Gardens are a favorite place to take a break from it all. Just commandeer a spare chair and enjoy the scenery. 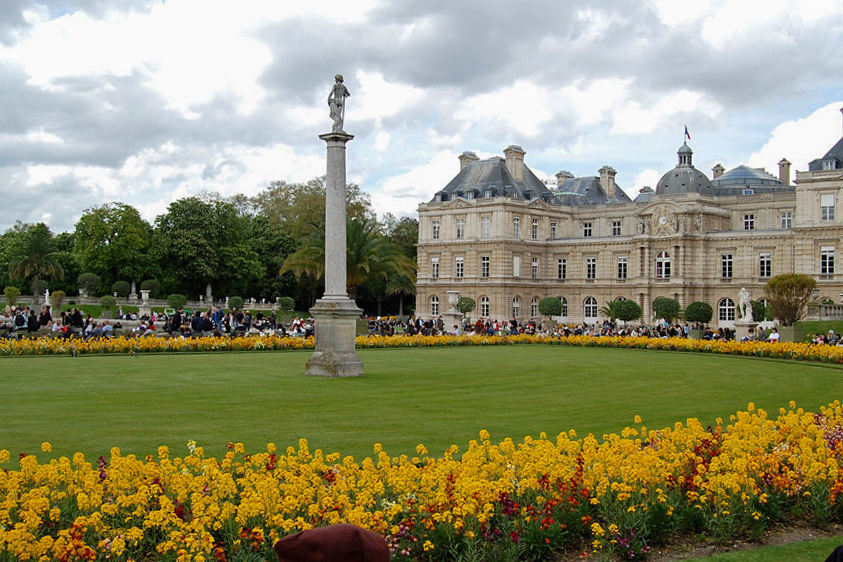 On one of our visits to the city, we took the RER train from the airport to a stop nearby, and literally crossed the gardens as our very first steps in Paris on that particular occasion. The sight of it brought a feeling of returning back to something very cherished. Sort of like coming back home after a long absence.

Yeah, I can easily identify with Midnight in Paris‘s Gil.