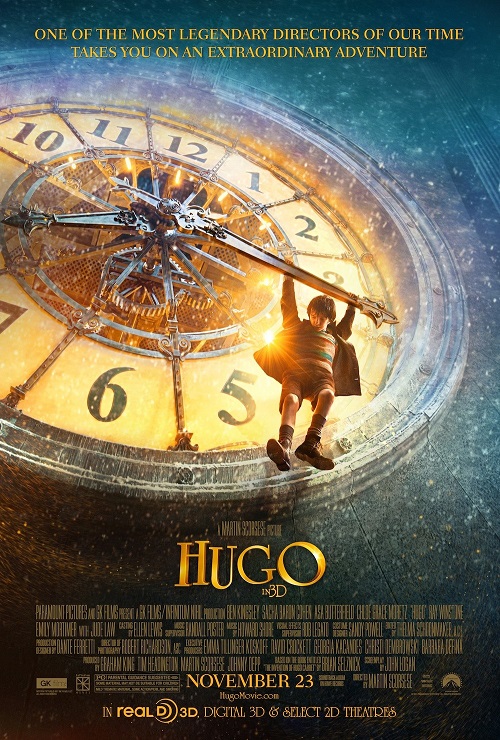 It is brilliantly made. It deserves all of those non-acting Oscars that it received and probably a couple more (I loved the score and the overall editing was superb, but those two awards went elsewhere). And it directly speaks to our love of cinematography as a magical art form – the sentiment I share with uncounted movie fans.

Against that background, the few nitpicks I have about the visually arresting story of a gifted orphan in search of his purpose in life appear minor. Mostly, they have to do with plot devices that I find superficial. For instance, Hugo is looking for a message from his deceased father, and his only remaining link to him is the old notebook; that notebook may have been burned by Monsieur Meiles or not, but as soon as searching for it leads the boy to the old drawings related to the cinema, it is completely forgotten, as is the father, really.

I was also left a bit fuzzy on the timelines. The events are seemingly placed somewhere between the two world wars, with the fallout from WWI having a significant impact on Georges Meiles. Even if we push the story to the late 1930’s, it has been no more than twenty years since the end of that war until Hugo meets Meiles. And yet, both the depiction of Monsieur Meiles as at least a septuagenarian and several references to “long-long time ago” suggest that more time should have passed.

But those are truly only nitpicks that speak primarily to how I process what I see in movies rather than to how good or bad the movie is. These few loose ends are nicely counterbalanced by the mind-blowing imagery and the incandescent vignettes with just a handful of secondary characters that richly bring the train station to life. There are few lines that these characters speak – in fact, dialogues are definitely secondary to visual imagery throughout the movie – but that only serves as a perfect illustration of how movies allow us to see things that we would otherwise have not seen.

And the flashbacks of the early silent movies production process – reenacted with enough passion and mischief to be both funny and fascinating – are pure gold for a history-minded spectator.

Highly recommended for dreamers of all ages.