Travel memories: I once bought a painting

We never pass up a chance to walk through a street market. Sampling foodstuffs, stopping to admire craftsmanship, checking out odd or antique objects on display – there is little in the form of free entertainment that beats that experience. Yet, we practically never buy anything, not being much into collecting things that we probably do not need. We take pleasure in browsing without the added gratification of acquiring stuff.

Street art galleries exacerbate that dichotomy. I love paintings – in another life, given more resources, I would have been an art collector. In my existing life, the only paintings that I can afford to buy are sold on the street markets (not counting an occasional neighborhood garage sale), and I always stop to browse. And almost always let my pragmatism win and refrain from buying anything – after all, a painting bought in the street will almost certainly end up as a relatively expensive souvenir rather than an appreciable asset.

One time, on Montmartre’s famed Place du Tertre, I vacillated for nearly half an hour in front of a beautiful painting of just the kind that I love. By the time I finally decided to let my impulsive desires trumpet my pragmatism, the artist had already sold it to someone else.

While in Cracow a few years ago, we came across a colorful open-air art gallery near Florian’s Gate at the edge of the Old Town. Here are a couple of pictures with different degree of focal length. 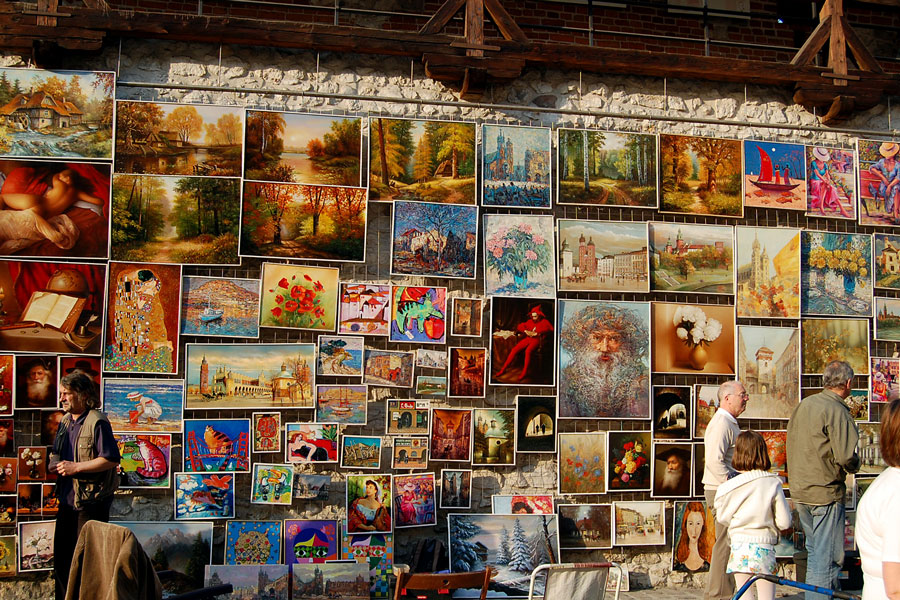 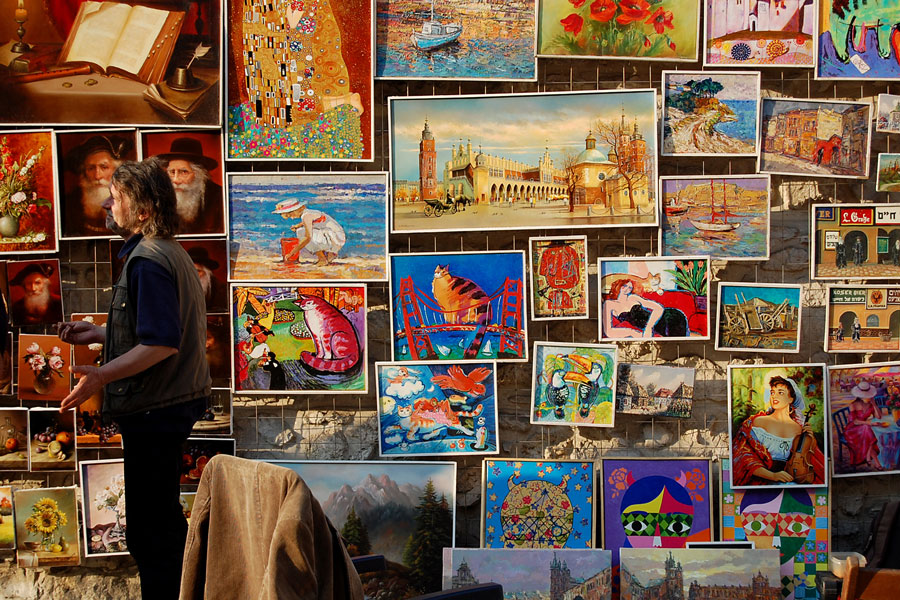 A connoisseur undoubtedly will point out that knock-offs, kitsch and no more than average skill predominate on this display (as is the case at any other such gallery). And yet, for an amateur art lover such as myself, there are plenty of works that strike my fancy.

So I did find one painting that I especially liked. I even inquired about the price. 750 zloty, which at that point was equivalent to about $150. Not too expensive – but I dithered. In any case, I did not have enough cash in my pocket, and instead of going in search of the nearest ATM, we continued our leisurely stroll around town.

Eventually, as we decided to spend some time on a bench in the main city square, Natasha and Becky somehow talked me into going back and buying that painting. I must have had a really wistful expression on my face. And I gave in. We stopped by an ATM, got the cash, and went to Florian’s Gate half expecting the painting to be gone from display.

It was still there, but the guy who gave me the original price was nowhere to be seen. I asked another of the sellers who were all lounging in garden chairs near the center of the exposition. He said, six hundred and fifty. I asked, six hundred even? He agreed. An equivalent of $120 exchanged hands, he took the painting down, wrapped it in some paper, and we were on our way again.

When we got back to the hotel that evening, we realized that the painting was too big in size to transport with us on a plane. I figured it would not survive traveling with the checked-in luggage but also had no desire to spend as much money again to ship it to our address in London, especially since it was attached to a simple wooden frame that would have to be replaced anyway. So I ended up taking it off the frame and fashioning it into a tube, wrapped into a lot of clothing, so that it could fit into our biggest suitcase. Felt a bit of a smuggler, to be honest.

The painting arrived in pristine shape. It’s been hanging in the choice spot in our London house and then in our New Jersey house ever since.

It even partially featured in one of the photographs that I posted in the last year or so. If anyone is adventurous enough, you can try to figure out on your own which painting it is based on the photographs in this post and the partial one from the archives herein. For all others, here is a part of that open-air gallery, which I snapped to remember the painting at the moment when it seemed I would not be buying it. Top row, second from right.

I love that painting.