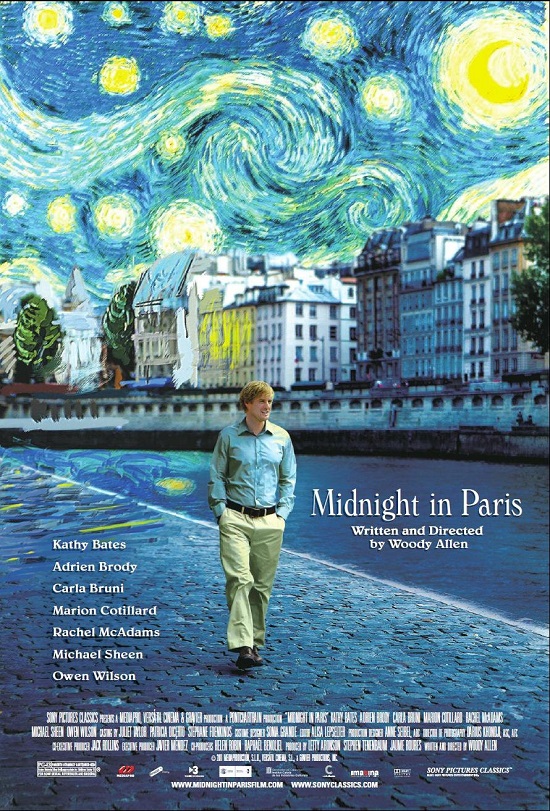 This year, my movie viewing habits prevented me from seeing any of the Oscar-nominated films ahead of the awards ceremony. Even those of the nominees that were already out on DVD did not find its way to the top of my Netflix queue until now. So the very first nominated movie arrived in my mailbox on the Monday following the Academy Awards.

I do not believe Midnight in Paris rises to the level of an Oscar winner, so no qualms here that it did not win anything beyond the original screenplay. But I liked it a lot nonetheless.

Then again, I am an admitted francophile. More importantly, a Paris-o-phile. The movie starts with solid three minutes of nothing but the lovely sights of the city with background music. Nothing else, not even the starring credits. I was instantly hooked.

The movie continued to use instantly recognizable – for us, at the very least – Parisian scenery throughout its duration, and I can easily identify with Owen Wilson’s character’s desire to live there. It was also full of excellent interaction between the characters of just the kind that I enjoy in Woody Allen’s movies. But the plot left a number of questions regarding the fantasy at its center open, and it took a couple of turns that I found inexplicable. It also got a little bit drunk on its own concept and introduced too many passing – but famous – characters that added little to the proceedings, IMHO. From that point of view, I will possibly challenge even the screenplay Oscar once I get to see other contestants.

In short, it is a charming ode to Paris, so highly recommended for those partial to evocative urban scenery. Aficionados of dialogue-driven dramedies will like the movie as well.