My favorite sights of Amsterdam

A more extensive photo-essay from more recent trip can be found here.

Our itineraries took us to Amsterdam just once on our journeys, and it was during the unfortunate period of time when we did not yet quite catch on to the fact that our main camera produced inexplicably grainy and blurry photographs in the best of lighting conditions. It was replaced almost immediately upon our return from Amsterdam, but the damage remains. There aren’t that many good pictures of Amsterdam in our archives.

Different people would have different associations when hearing the name of the city, but my first one is undoubtedly canals. Not narrow, picturesque and constantly disturbed by passing boats and gondolas as in Venice, but wider, tree-lined, placid, almost serene in comparison with city streets. Very little traffic on them, beyond a tourist boat. Most other vessels are stationary houseboats. 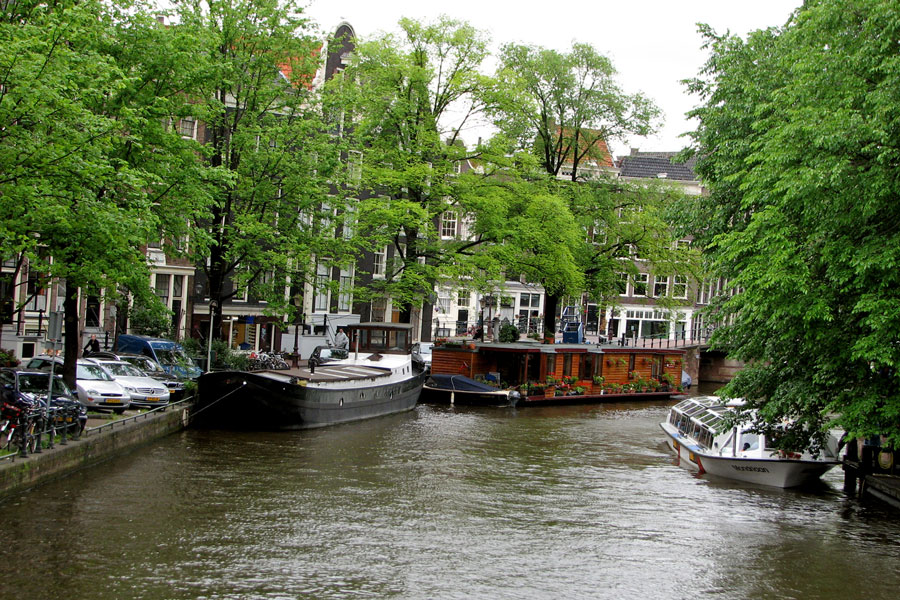 We considered renting a houseboat for our stay in Amsterdam, but opted instead for an apartment in a canal house, not unlike the one in the following picture. The narrow stairways between the floors, coupled with an absence of a toilet on the bedroom level, forced some hilarious night-time adventures that we frequently recall.

But the gabled houses themselves are a beauty. 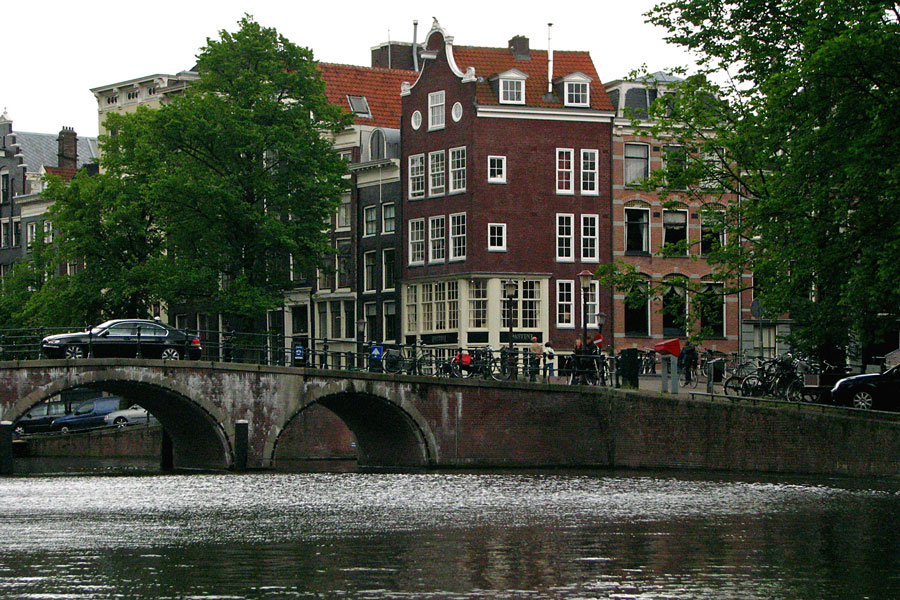 In my opinion, Amsterdam is remarkably short on monumental architecture for a city of its stature. Even the main city plaza, Dam, can hardly compete with major public spaces elsewhere in Europe. But the canal houses definitely make up for that shortcoming. We tried to pick different walking routes everywhere we went, and had a chance to admire many examples of the architectural style that is unique to Amsterdam.

You can see a beam sticking out from the middle part of the gabled roof in the picture above. That is actually a common feature of the canal houses. It is a hoist, to lift furniture to the upper floors through the windows. The narrow staircases are impossible to navigate with anything larger than a small suitcase.

My fondness for impressive tall buildings was well served by several great churches in Amsterdam, among them Westerkerk.

On the left, the church is seen from the deck of the Houseboat Museum (which is a curious enough visit to be worth the small entry fee). The middle is an early-evening close-up. An on the right, one of the views from the top of the building. Getting there requires some luck and determination, as the flow of visitors is extremely limited. But for those who like vistas of a city from above, the effort is rewarding.

Amsterdam is a well-known city of bicycles, and one finds bikes parked pretty much everywhere, 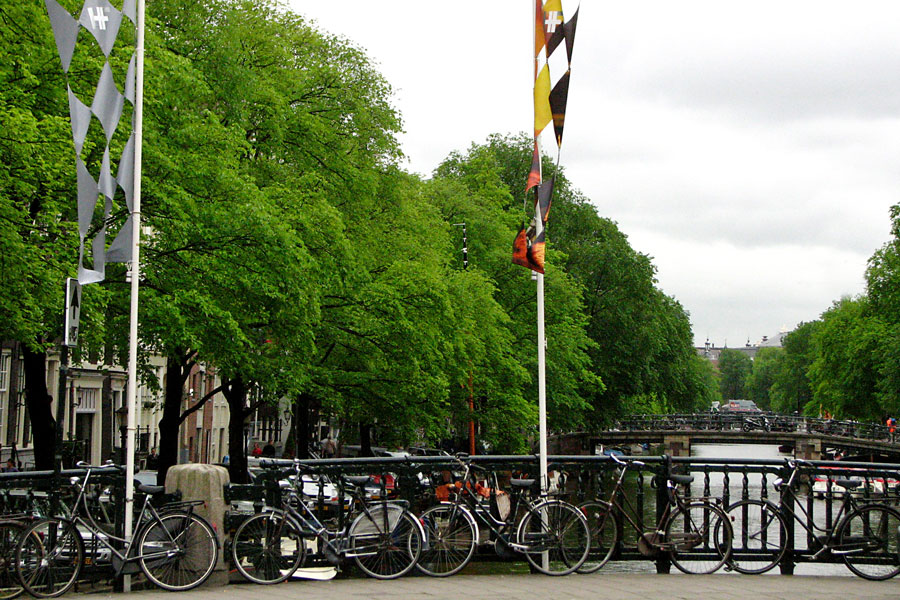 including along every available spot of railing on any given canal bridge. They all need to be secured with anti-theft devices, and we were explicitly warned not to ever leave our rentals unsecured.

But the city is not just cycle-friendly, it is practically cycle-dominated. 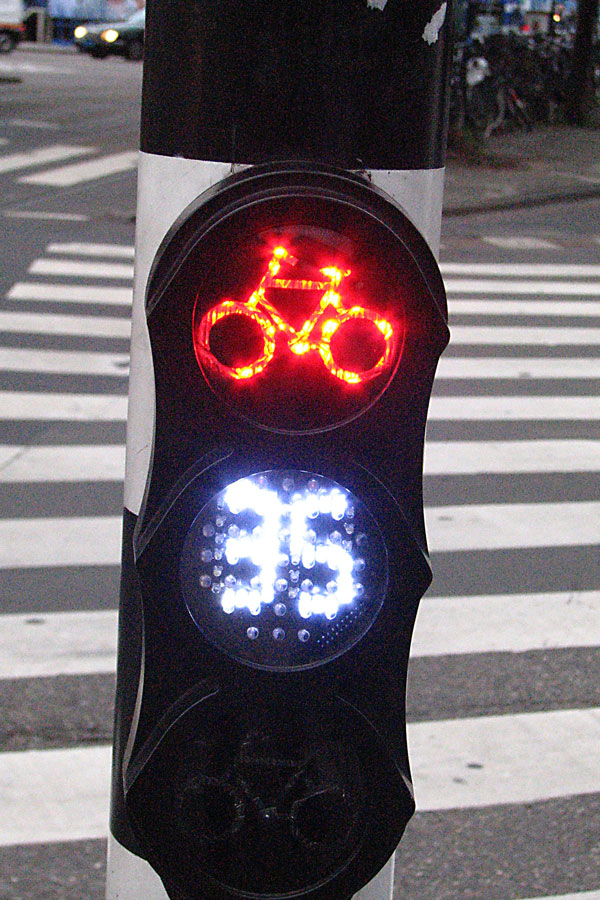 Traffic laws and signage favors cyclists above all other modes of transportation. We had several occasions of sitting at a red light in our car while a seemingly endless stream of bicycles was moving in various directions. Then, there are alleys where only the bikes can operate.

Pedestrians, by the way, do not get any privileges versus cyclists. In fact, one crosses a busy cycling lane at her own peril. Unless, of course, one is smart enough and patient enough to walk to the nearest intersection with a traffic light (as opposed to someone from New York, like me, who crosses the street where convenient, not where regulated). The traffic light on the left is not a curiosity at all, but a standard implement at many cycling crossings.

Yup, this entry is lacking impressive photography. All the more reason to look forward to eventual return to Amsterdam.