My favorite sights of London

When you lived in a given city for several years but you always approached it as a kind of “tourist”, targeting specific points of interest, never failing to admire the scenery, and practically never walking down its streets without a camera in hand, you end up with much more than a dozen of visuals that you can call “favorite sights”. When I decided to make London the next installment in this series and gathered my favorite pictures from our time there, I ended up at first with over a fifty photographs. Cutting it down to reasonable size proved to be a painful exercise.

In the end, I stopped at a bit over a dozen shots. Some of them featured in the past, but barring a stray exception, they do not specifically focus on famous landmarks even when said landmarks appear in the shot. Piccadilly Circus, Buckingham Palace, the Tower of London – I dropped these and other locations because you can freely find thousands of shots of them on the web, and also because while I will no doubt enjoy seeing them again one day, they probably will not bring back as many memories or feelings as the selection below.

We will start with a pretty obvious tourist stop, though. Trafalgar Square. 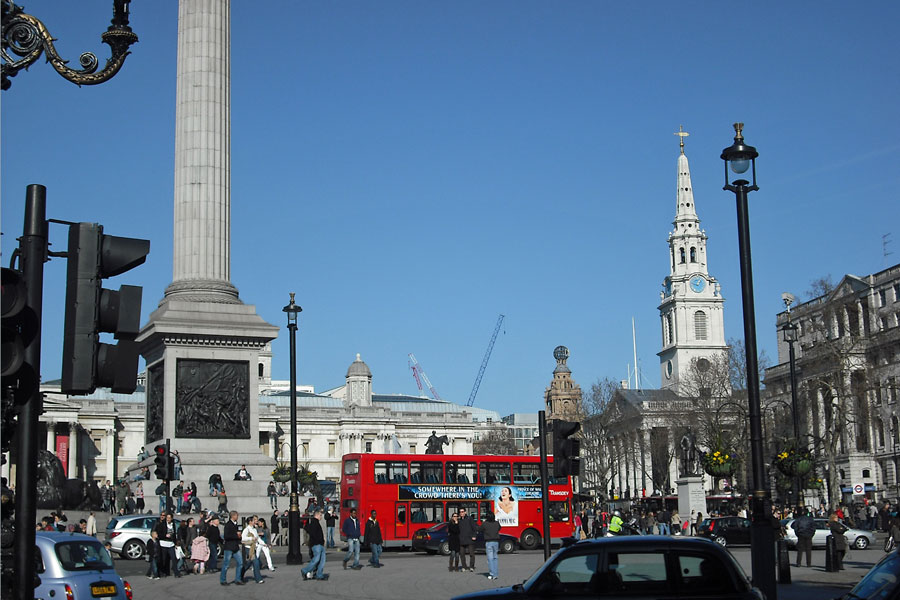 Since we actually lived in the Southeast part of London, several miles outside of the city center, we frequently came to the city via commuter rail line that terminated at the Charing Cross station, a hundred yards or so from the edge of Trafalgar Square. On many occasions, we crossed the square on foot, or lingered on its expanse. This is not a very exceptional shot, but it illustrates the busy nature of the square pretty well, and I can vividly imagine an excursion around the city with a visiting friend that would start here.

The next shot approximates a pretty awesome sight of Big Ben seen through the humongous wheel of the London Eye as a Southeastern commuter train approaches the Hungerford Railway Bridge. We never managed to properly capture the sight through the train windows, so one day I made a point of capturing a similar view from the playground at the foot of the London Eye. 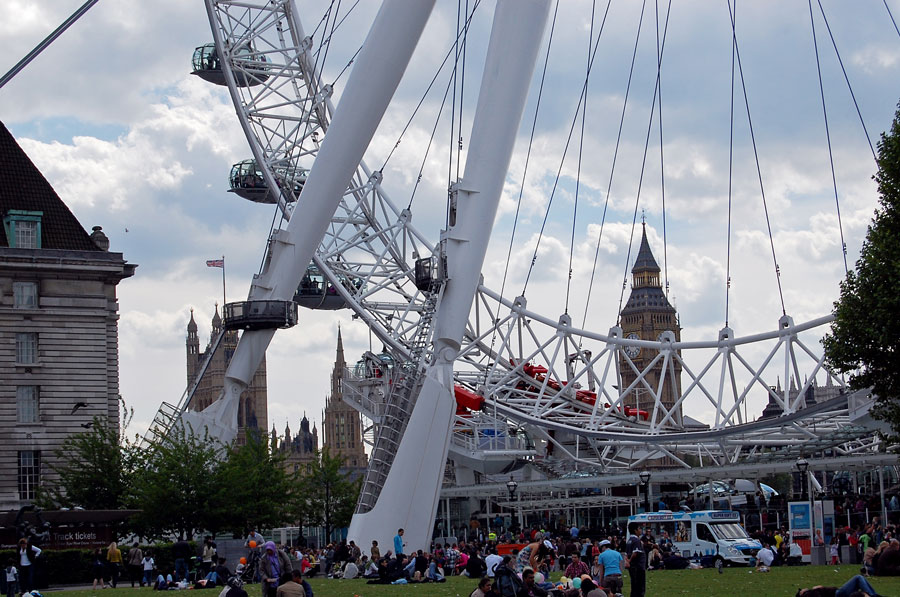 This next composition is one of the aforementioned exceptions, focused around major landmarks. This is Millenium Bridge running towards the imposing dome of the St Paul’s Cathedral. I just like this shot too much to leave it out. Especially considering how many times we strolled along the Riverside Walk in good weather and admired this view. 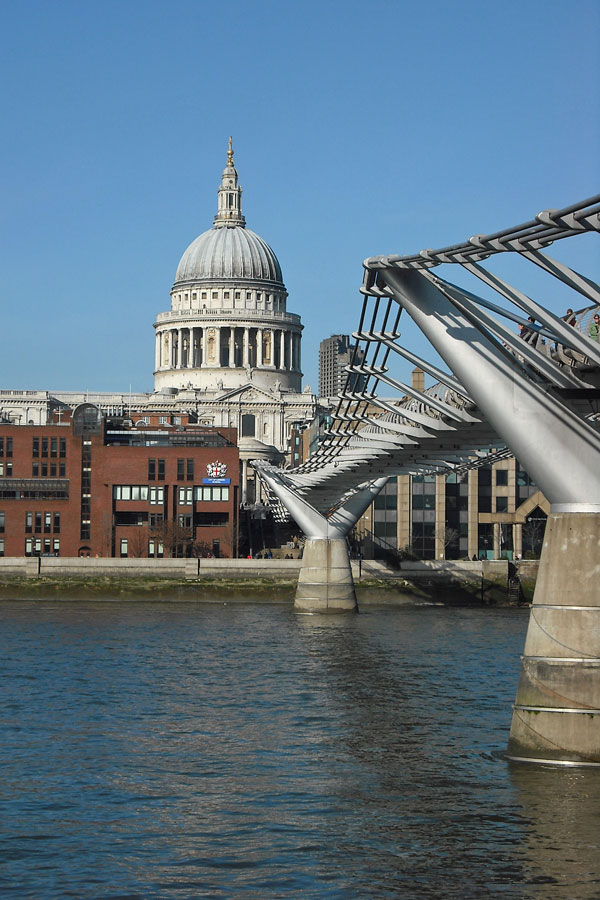 The shot below also features a couple of well-known landmarks, such as the Bank of England and the cone-shaped top of 30 St Mary Axe, also known as The Gherkin (or the “pickle building” as my kids called it at first). This view is quite emblematic of the solemnity of the City of London as I remember it. 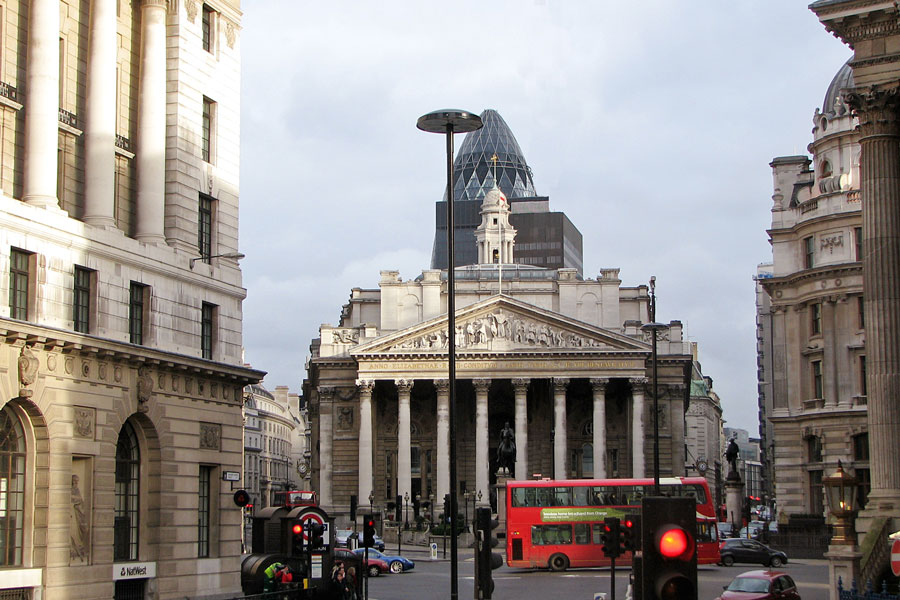 Everyone who have seen pictures of London is undoubtedly familiar with the iconic view of the Tower Bridge as seen from the riverbanks. The perspective of the bridge as one crosses it is much less commonly seen in photography. Which is one of the reasons this is among my most favorite sights in London. 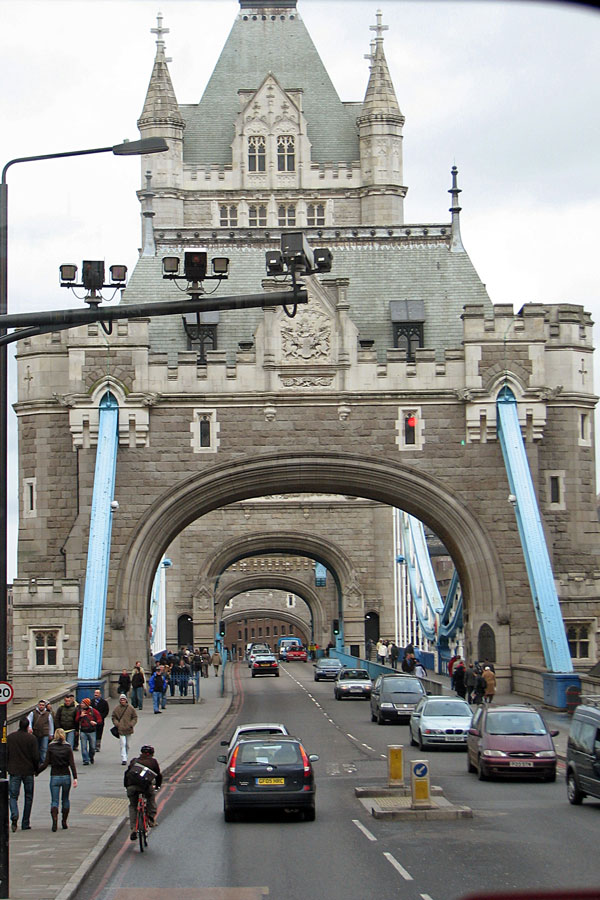 A shot of the Parliament from this angle is also not a common sight – most of the photographers prefer to have the Big Ben tower in the foreground, and shoot from under the London Eye. This is taken from Lambeth Palace Road, while on the upper deck of the tour bus. Natasha and I were on our reconnaissance trip to London in September of 2006. It was not my first time in the British capital, but it had a special feel in terms of excitement and anticipation before our move across the pond. We were preparing ourselves for having these sights to be a regular part of our lives, and this particular shot evokes that memory like no other. 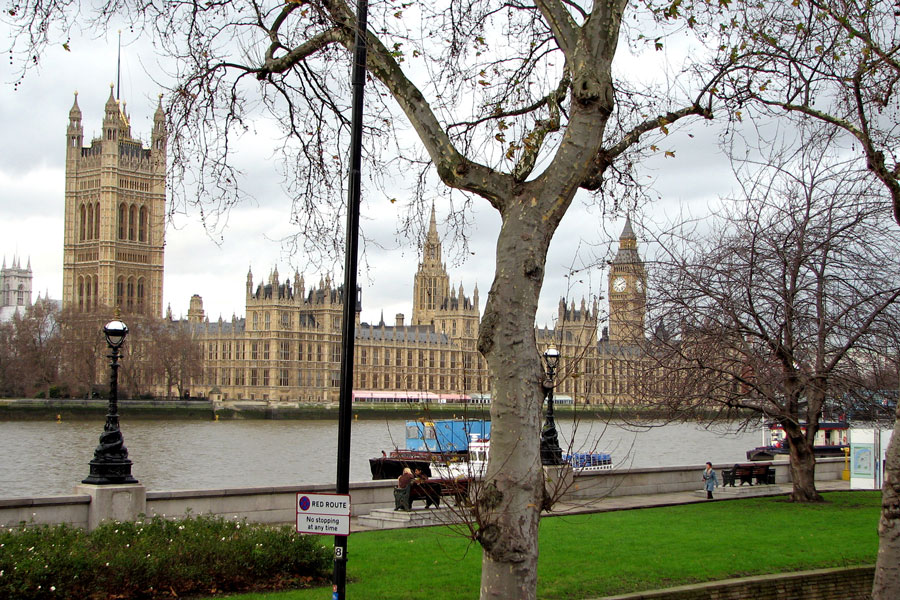 A typical corner of West End, this is New Row running into Martin’s Lane. 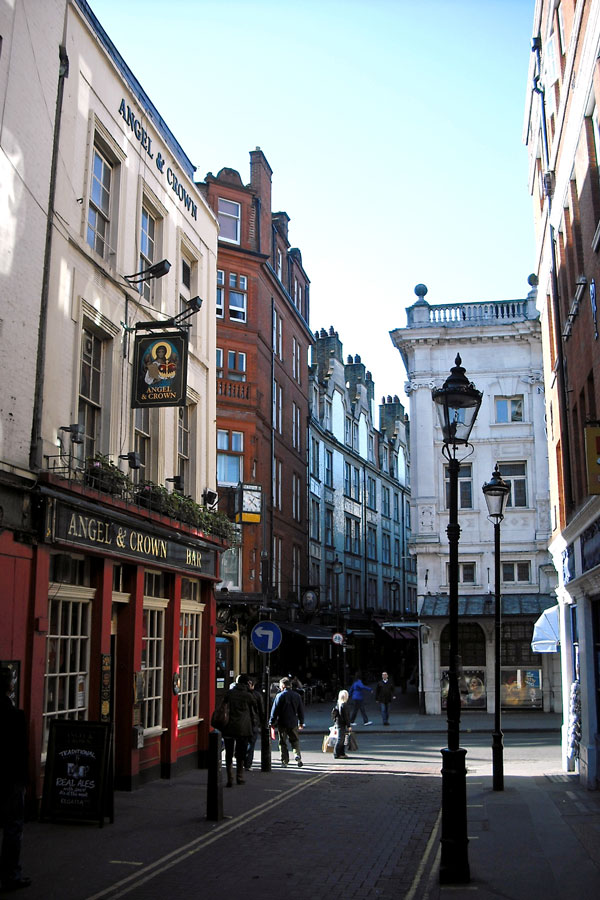 The hanging flowerbeds are an archetypal exterior decoration for pubs and restaurants throughout the country. One of my biggest photographic regrets of those years is taking too few of these pictures around England. 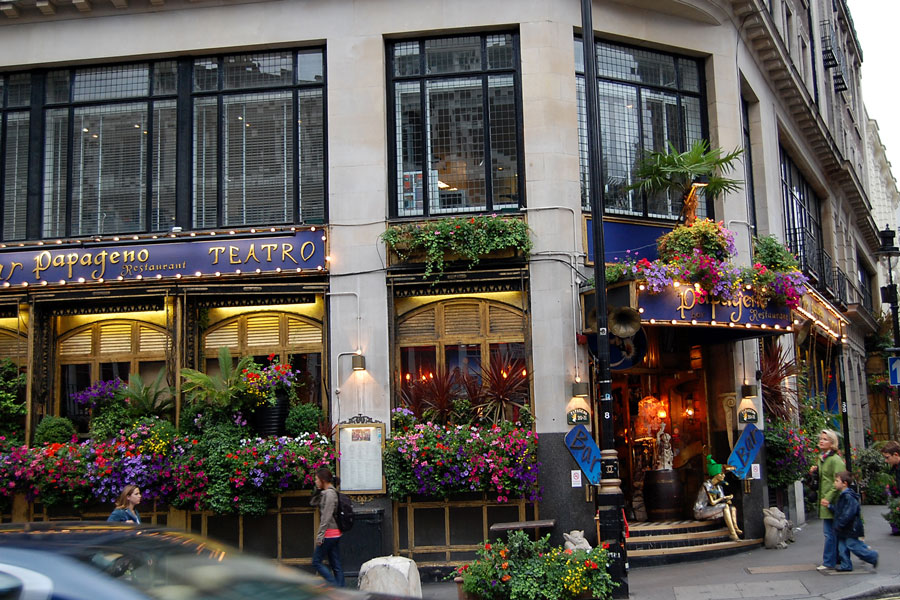 Craven Passage is a lowered walkway underneath the Charing Cross station. I always found the perspective from the bottom of the staircase rather different. 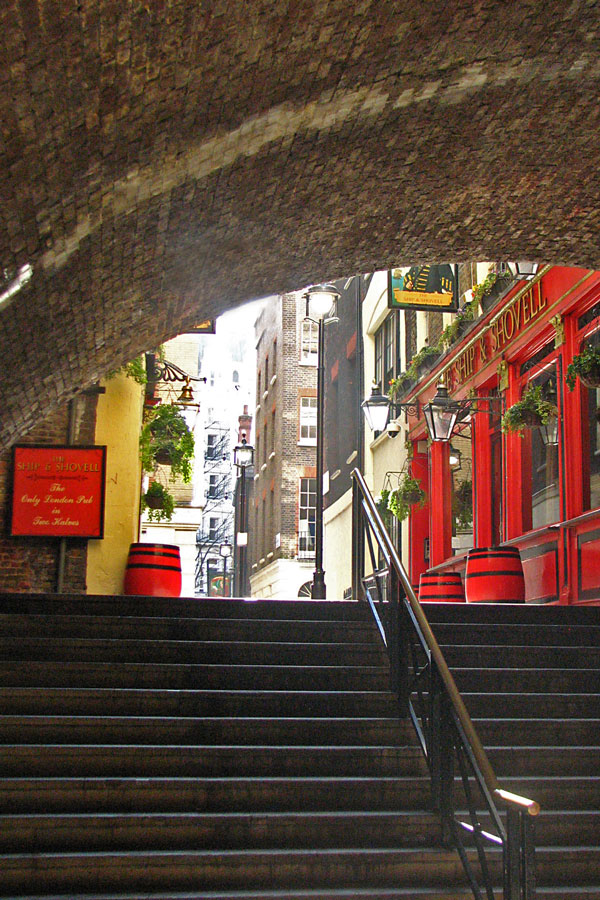 The next shot is one of the feel-good memories – and I am not a skater myself. This is the Somerset House skating rink, where I took the children for a splendid hour on ice during Christmas of 2007. The mansion itself is one of the second-tier tourist attractions in the city, boasting a pretty good paintings gallery. 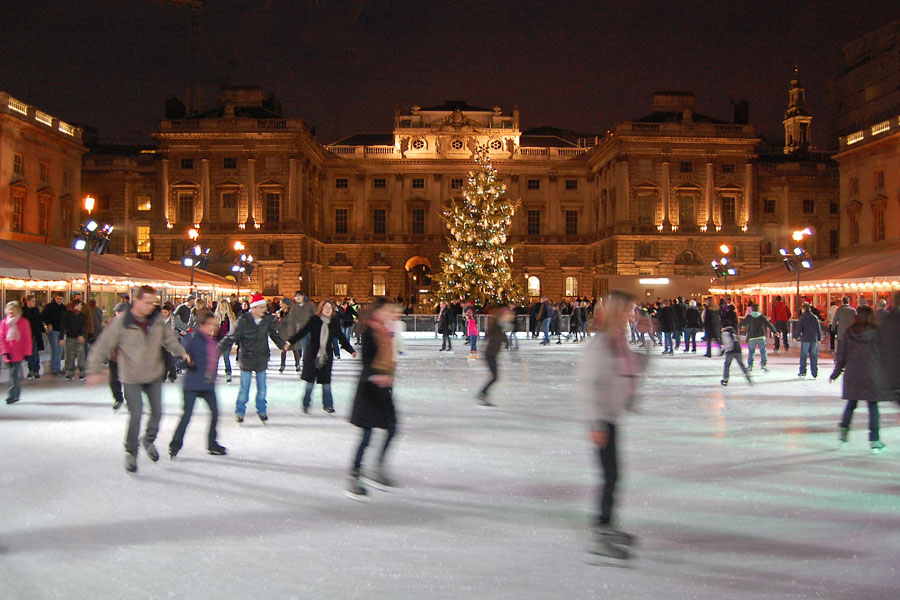 Moving out of the city center, this is the view towards Canary Wharf, where my offices were located, from the grounds of the Old Royal Naval College in Greenwich. Inexplicably, I cannot locate any shots of the same vista from the top of the hill in the Greenwich Park, which provides a significantly more dramatic perspective. All pictures we took there were with one of our visiting dignitaries in them. Still, this view approximates the one we lingered to take in on probably a hundred occasions. 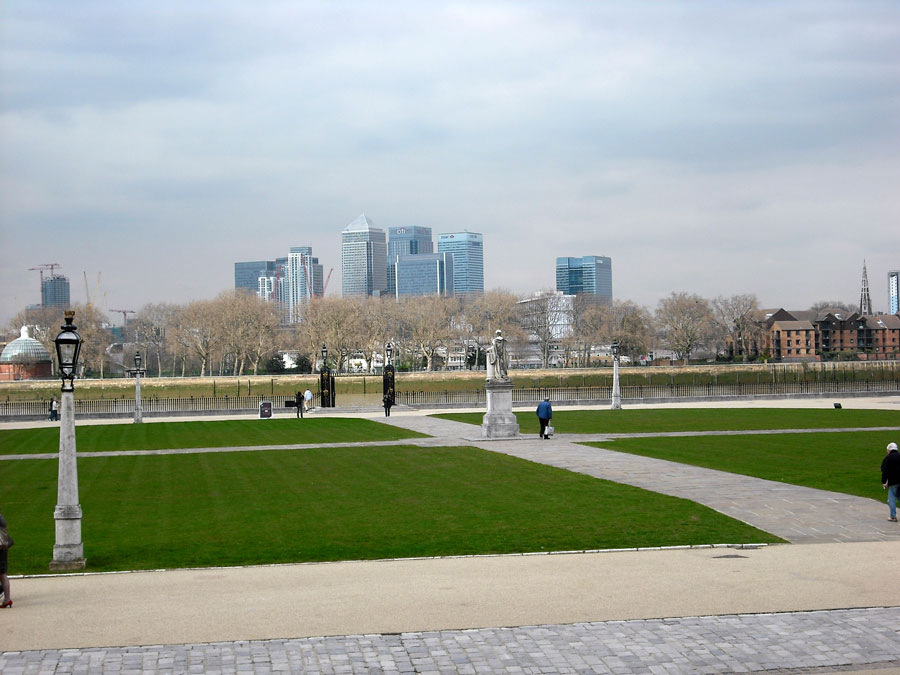 A considerably less dramatic view is next. This is Abbey Road. As a lifelong Beatles fan I was pleasantly surprised one day to realize that our good friends lived right around the corner from this intersection. We walked across the street at the same spot where the Fab Four had shot their famous album cover quite a few times. 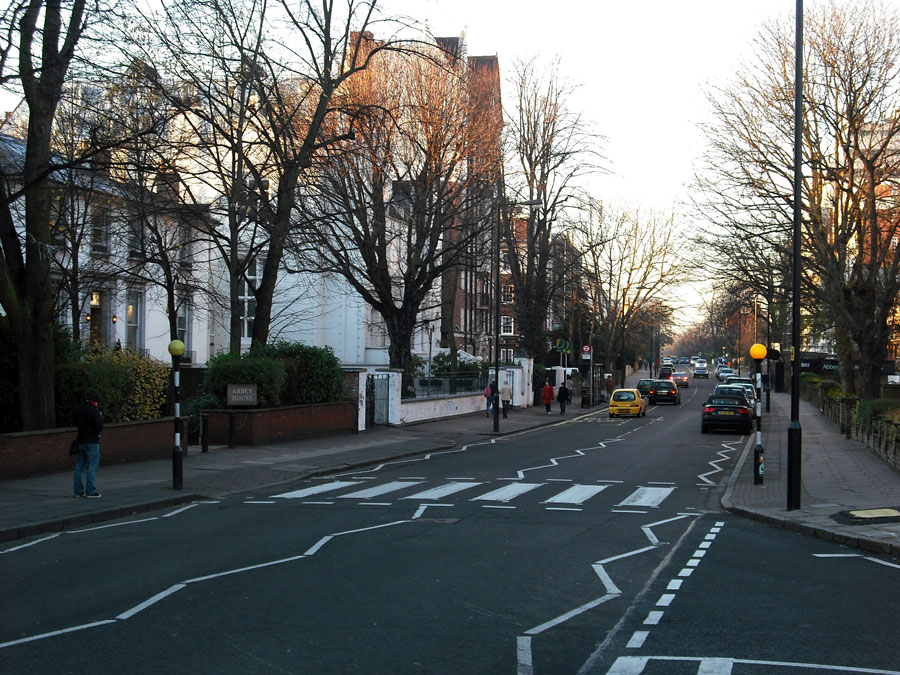 My thoughtful eldest child presented me with a blown-up poster of the album cover a couple of years ago, which hangs in my study. Despite the nearly 40-year interval between that picture and mine, I can still see the resemblance. The white garden fence remains the same, even if today it is practically completely covered with handwritten notes from the fans who make pilgrimage here.

You are unlikely to set foot in Blackheath if you come to London as a visitor. It is a picturesque village abutting a large meadow in Southeast London that was close enough to our place of residence to host us one way or another almost weekly. This tranquil pond in one of its corners stirs many good memories. 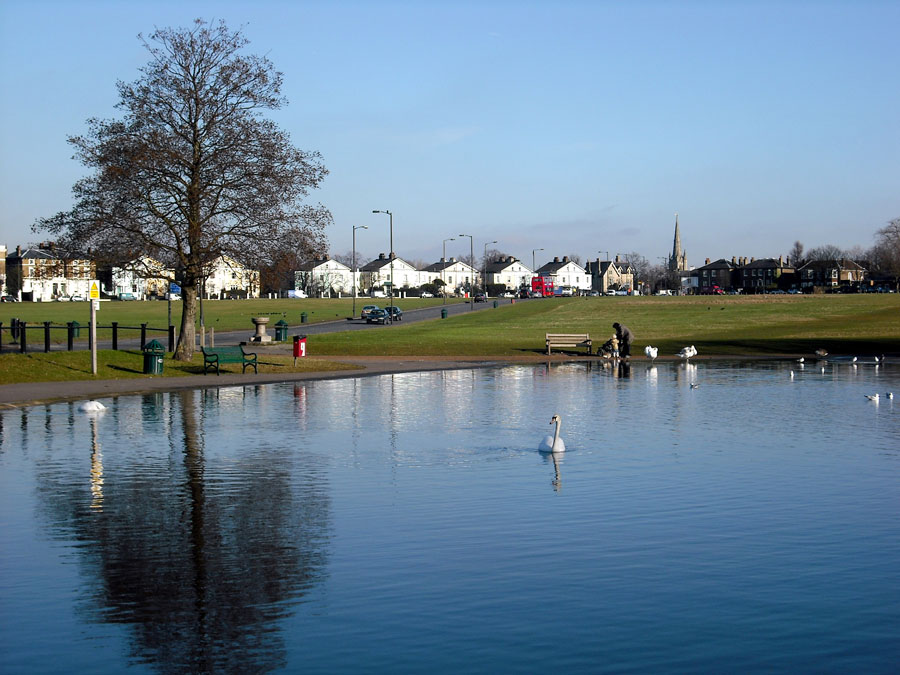 Becky went to school literally a couple of minutes away by foot from this spot. She walked by here more frequently than any of us.

My parting shot is not a vista or even a street corner. This mushroom stand happens to remind me of the fantastic feast for senses that is the Borough Market. 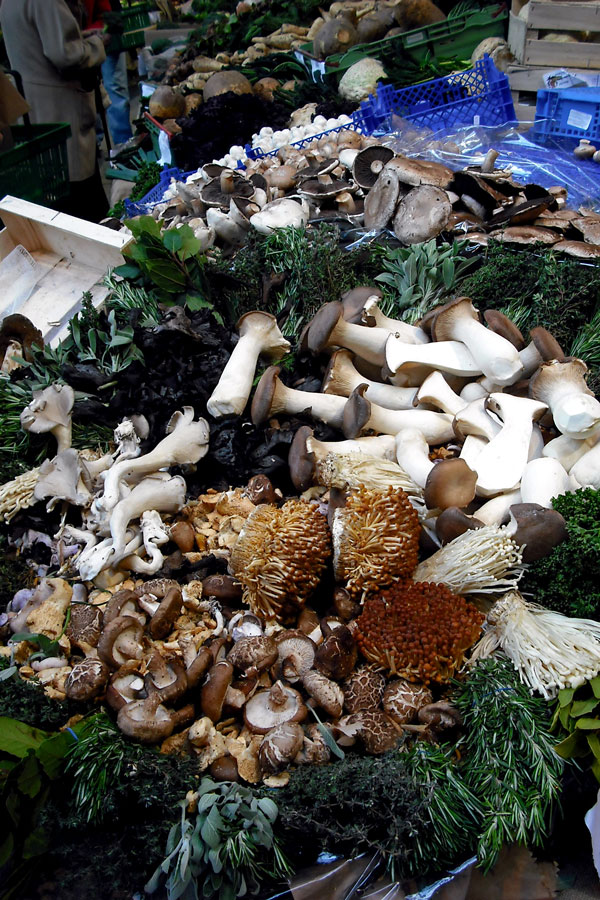 Quite a few great memories in these pictures. I’m making this enjoyable for at least one person, for sure. 😉