My favorite sights of Florence

Boy, this is not a simple task, picking just a few shots of Florence. I’ve been to the city several times and I can never get enough of it, so it is no surprise that we accumulated quite a lot of photographic memories over time.

The funny thing is, my very first exposure to Florence left me rather underwhelmed. I put it down to absence of grand fountains on major squares, which was quite a change from Rome, which we had visited right before coming to Florence for the first time. No new fountains were erected by the time we returned to the city, but it gradually grew on me to the point that I now count it among my most loved destinations.

The first shot in this brief tour around Florence is a clear contender for the title of the most magnificent panoramic urban vistas in the world. 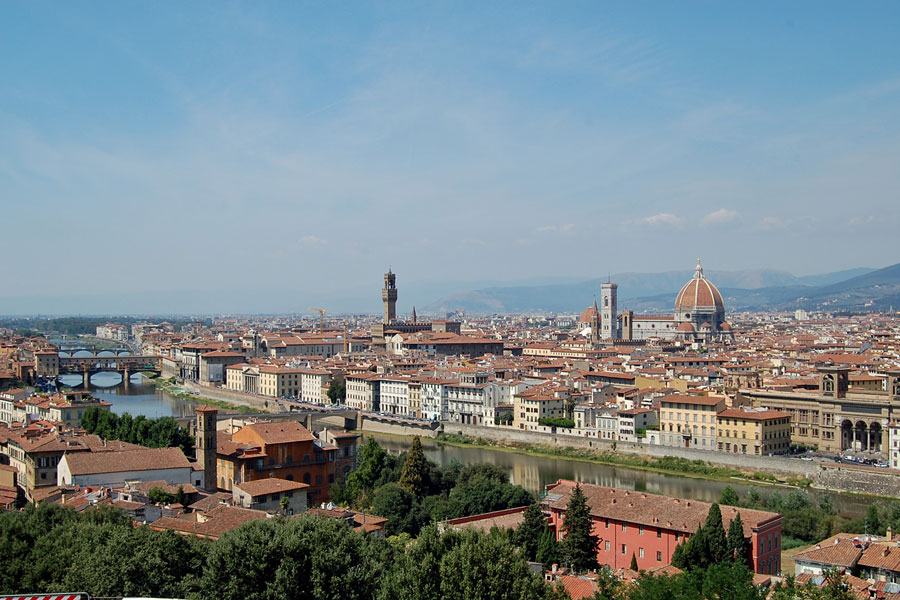 It is the view of Florence Old Town from Piazzale Michelangelo (also spelled Michelangiolo sometimes), which sits high on the hill in the Oltrarno district. To my chagrin, we inexplicably failed to take panoramic shots from this spot in our several visits, but even a straight view over town is quite impressive, with the Cathedral dome, the Campanile and the tower of Palazzo Vecchio dominating the view. Ponte Vecchio is seen on the left as well. We will look at all of these sights more closely as we continue.

Cathedral complex, which as pretty much everywhere in Italy consists of three structures, the Duomo itself, the Baptistery and the belltower, is a feast for eyes. The exquisite Giotto Campanile and the magnificent façade of the Cathedral cannot be described in words. Here are two perspectives, from northwest and southwest sides of the Baptistery.

Another iconic landmark of Florence is Ponte Vecchio. 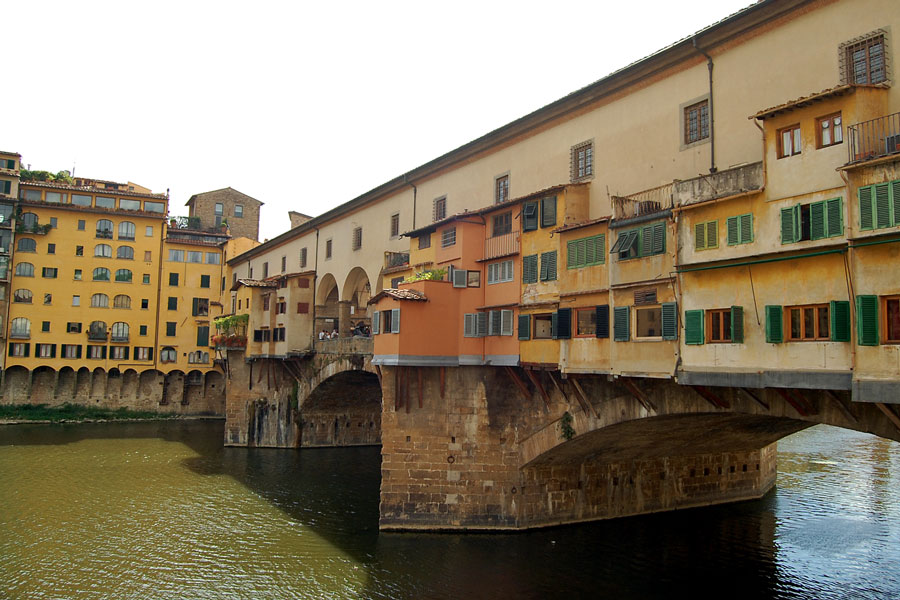 The first time I stepped on it, I did not realize that I was on the bridge crossing the river. I thought it was simply another street, since the buildings on each side conceal the river pretty well. Only upon reaching its middle, where open arches provide the view of Arno, I figured out that I was standing on the famous bridge.

Here is a curious section of the bridge. 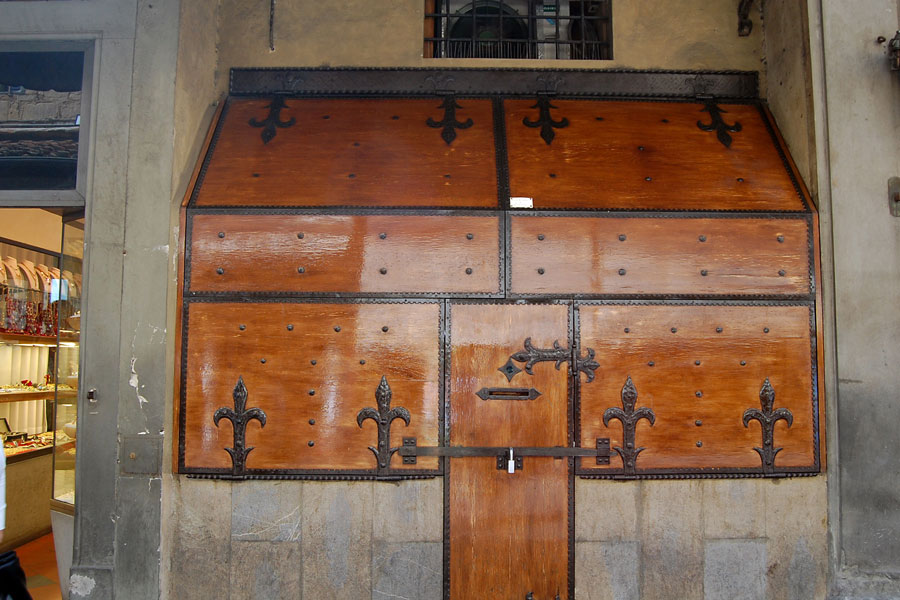 This chest is actually a little shop that is closed for business. The top and the walls would “unfold” when the business hours resume, most likely than not showcasing jewelry that is the main goods sold along the length of the bridge. 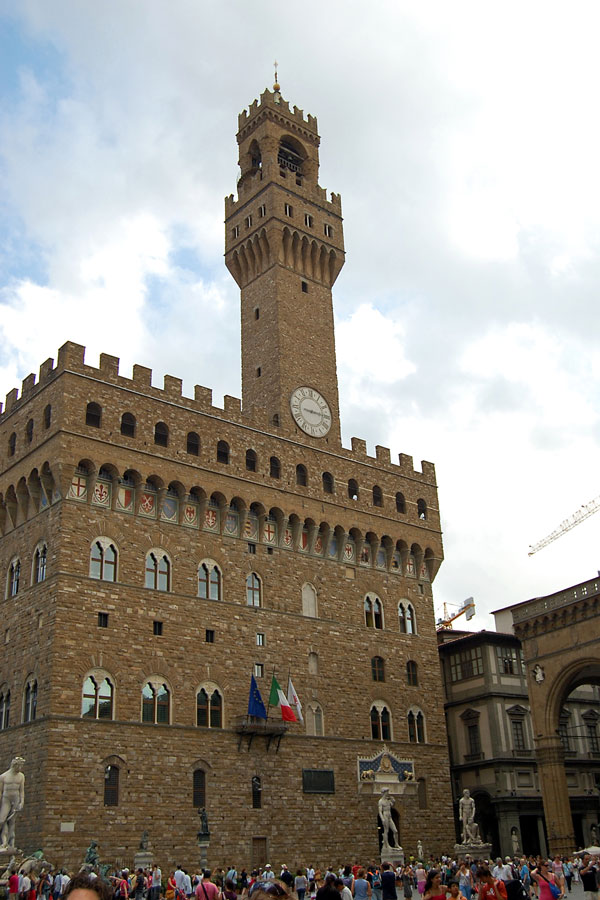 The focal point of the Old Town is Piazza della Signoria, which is dominated by Palazzo Vecchio, the town hall that is now primarily a civic museum. At its foot stands the copy of Michelangelo’s David, probably the most famous statue in the world. It is not a bad copy (another copy that you can find at Piazzale Michelangelo is much worse), but if you want to see the original, you will have to pay for entrance to the Galleria dell’Accademia, which is located some distance away from the core area. 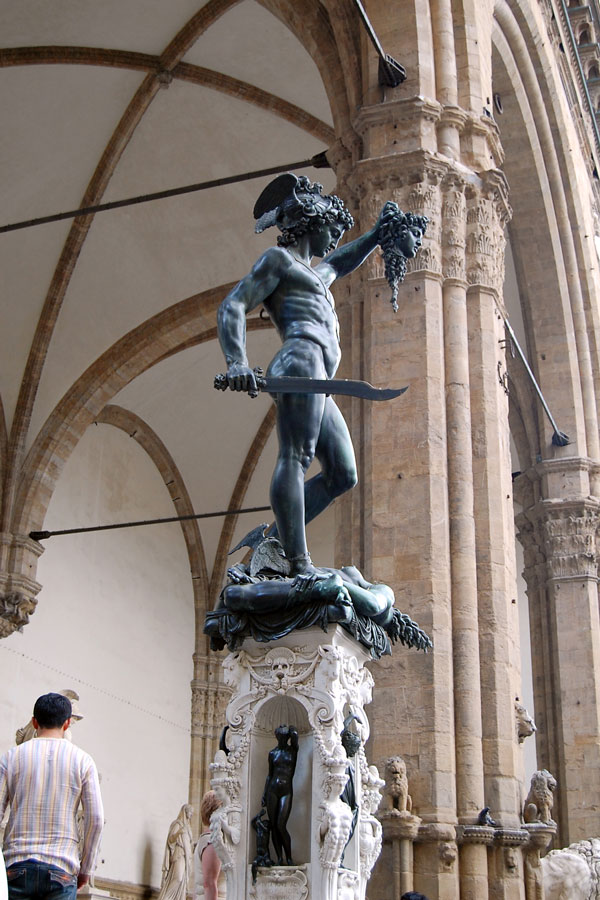 I once did just that – paid for the entrance, went straight to David, admired it for close to half-hour, and then left. Galleria d’Uffizi, which is right next to Piazza della Signoria, holds one of the top painting collections in the world, and my advice is to spend extra time there, instead of Accademia, although a true art lover will undoubtedly find something of interest in either gallery.

Opposite from Palazzo Vecchio is Loggia dei Lanzi, the lovely three-arches-wide open-air statuary. Those who do not want to pay entrance fees to any museums can easily satisfy their hunger for fine Renaissance art here.

And on the corner of Palazzo Vecchio that juts into Piazza stands the only significant fountain in all of the city, Fontana di Neptuno. 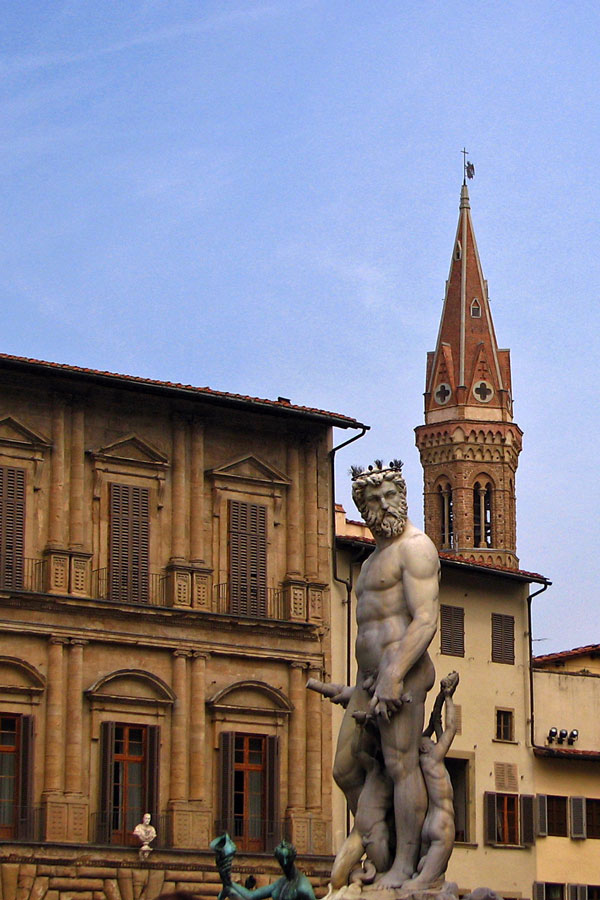 The water never more than trickles from it, and the giant figure of the Sea God is somewhat disproportionate to the rest of the fountain. Neptune adorns quite a number of fountains across Italy, and in my personal opinion, this is not one of the best of them. 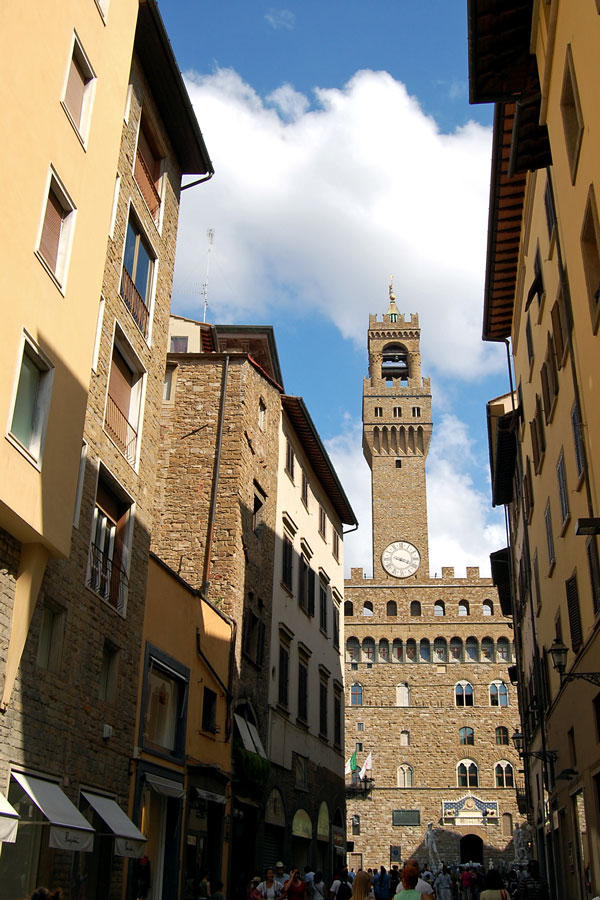 Nonetheless, it attracts its portion of tourists. You will probably linger too. The tower in the background of the shot of the fountain is the campanile of Badia Fiorentina, an ancient abbey.

You can approach Piazza della Signoria from different directions, and Palazzo Vecchio will announce its presence long before you reach the busy square. In the shot at left, for instance, it is waiting for us at the end of Via Vacchereccia.

Or you can glimpse it from various side streets. When the palazzo tower serves as the background for Florentine vernacular architecture, the views are just magical. 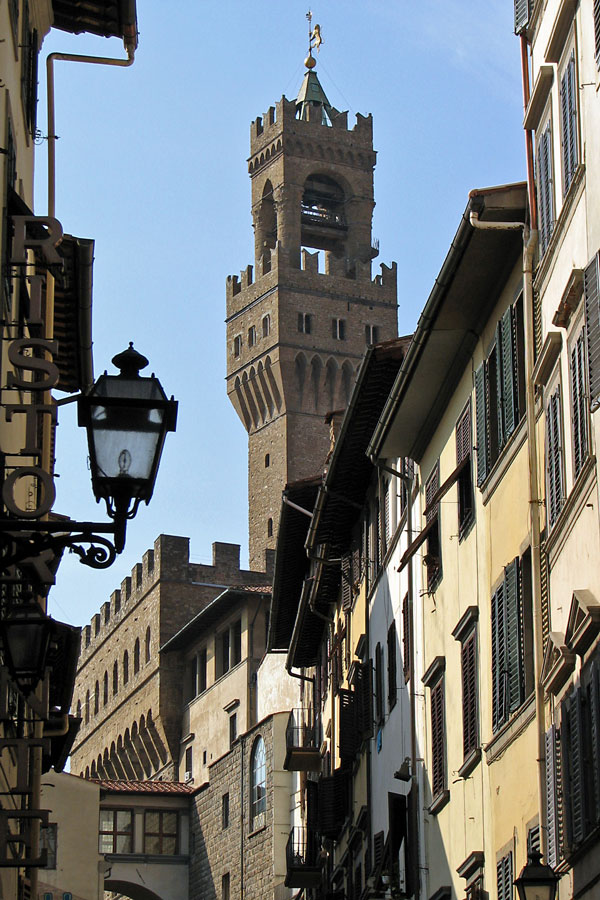 But it is not only famous sights that attract me to Florence. Just walk the streets in the historic parts of town, and you will come across many fine buildings that satisfy my hunger for architectural beauty. 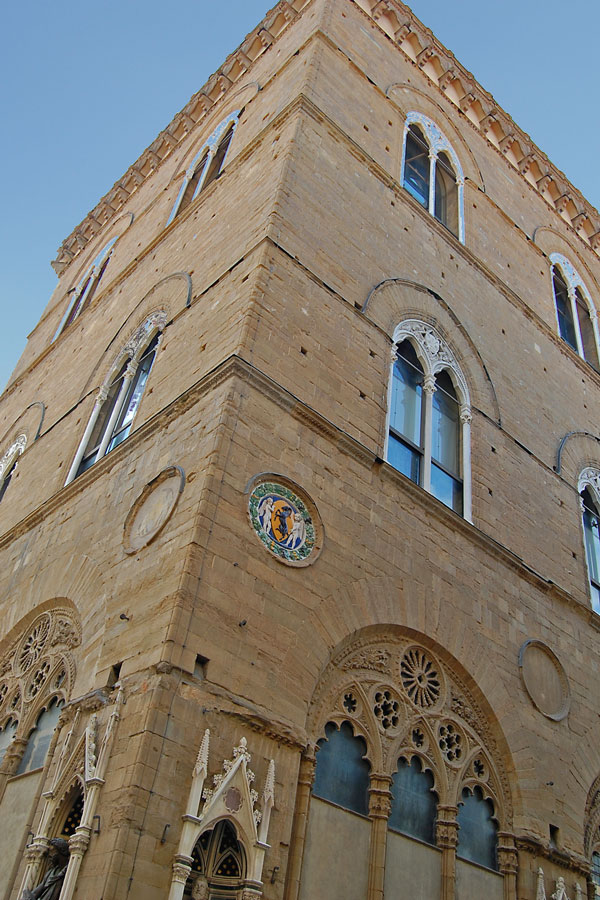 The intricacy of outward decorations and window openings suggest exuberant resplendence inside. Of course, not all of these erstwhile palaces remain truly palatial today, but quite a few are open to the public as museums of the golden era of the city.

So much more that I love in Florence cannot fit into a short overview. Basilica di Santa Croce, which could have been a part of the Cathedral complex; Piazza della Reppublica, another grand public place surrounded by impressive buildings; Piazzale degli Uffizi, with a statue of a Renaissance titan in each of its arches; the Great Synagogue; Palazzo Pitti and its sloping Boboli Gardens; Santa Maria Novella. I could continue for a long time.

A follow-up photo-essay can be found here.