Skating with an Olympic champion

Today’s Russian word is захолустье. Most closely translated as “a God-forsaken place”, it means a backwater, marginal, more likely than not unattractive, sparsely-populated periphery town or village with rudimentary, if any, modern infrastructure and nothing to be proud about. (To pronounce it, start with “z” as in “zoo”, followed by “ah”, followed by “ho” as in “horse”, followed by “loost”, which is exactly like combining the vowel sound in “loose” with the consonant ending in “lost”, finally followed by “yeh”. To make it sound really Russian, you need to soften the “t”, which I do not believe has an English phonetic equivalent.)

The area of New Jersey where we live can hardly be called a захолустье on merit. It is well built-up, has all of the attributes of modern infrastructure aside from local public transportation, provides for quite a number of diversions, and some townships even have their own theatrical societies. And yet, the City commuter lot that resides in this area chooses it precisely for its comparative sleepiness in the shadow of the Big Apple.

A celebrity appearance at a low-key local event is what brings the backwater-ness of Central Jersey into focus. “What might she be doing in our захолустье?” is the understandable reaction.

We had precisely that reaction when, upon arriving at the local ice arena for the end-of-season children skating competition, we learned that the 1994 Olympic champion Oksana Baiul was in attendance and scheduled to skate a couple of exhibition programs.

The incongruity of a non-resident, non-native Olympic champion making an appearance in “God-forsaken” Old Bridge was easily explained. A local skater is part of Ms Baiul’s ice-skating Broadway musical, and he arranged her appearance as a sort of a promotional stint. She signed programs and skates, posed for pictures with kids, and performed both a current number from the musical and a simplified version of her Olympic gold medal winning “Swan Lake” routine. I have no doubt that at least a dozen families who would otherwise not bother to go see Cold as Ice will now do so.

Baiul is still very graceful on the ice and a pleasure to watch, even though her most challenging jumps these days are mere doubles.

She tried her very best to charm the public, who gave her a thunderous reception, but her infamous temper almost got the best of her precisely at the moment when it was my little girl’s turn to get her skate signed. Without going into much detail on the unfortunate mishap, Kimmy still got the autograph, but no personal picture with the star. This shot was taken seconds before Ms Baiul got temporarily put off by a child’s behavior. 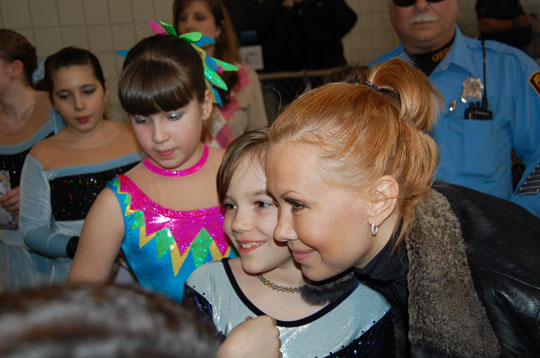 When it was her turn to perform, Kimmy coolly skated a clean and composed program. From this un-objective spectator’s perspective, she was hands down the best in her skill-level/age group. The judges agreed.